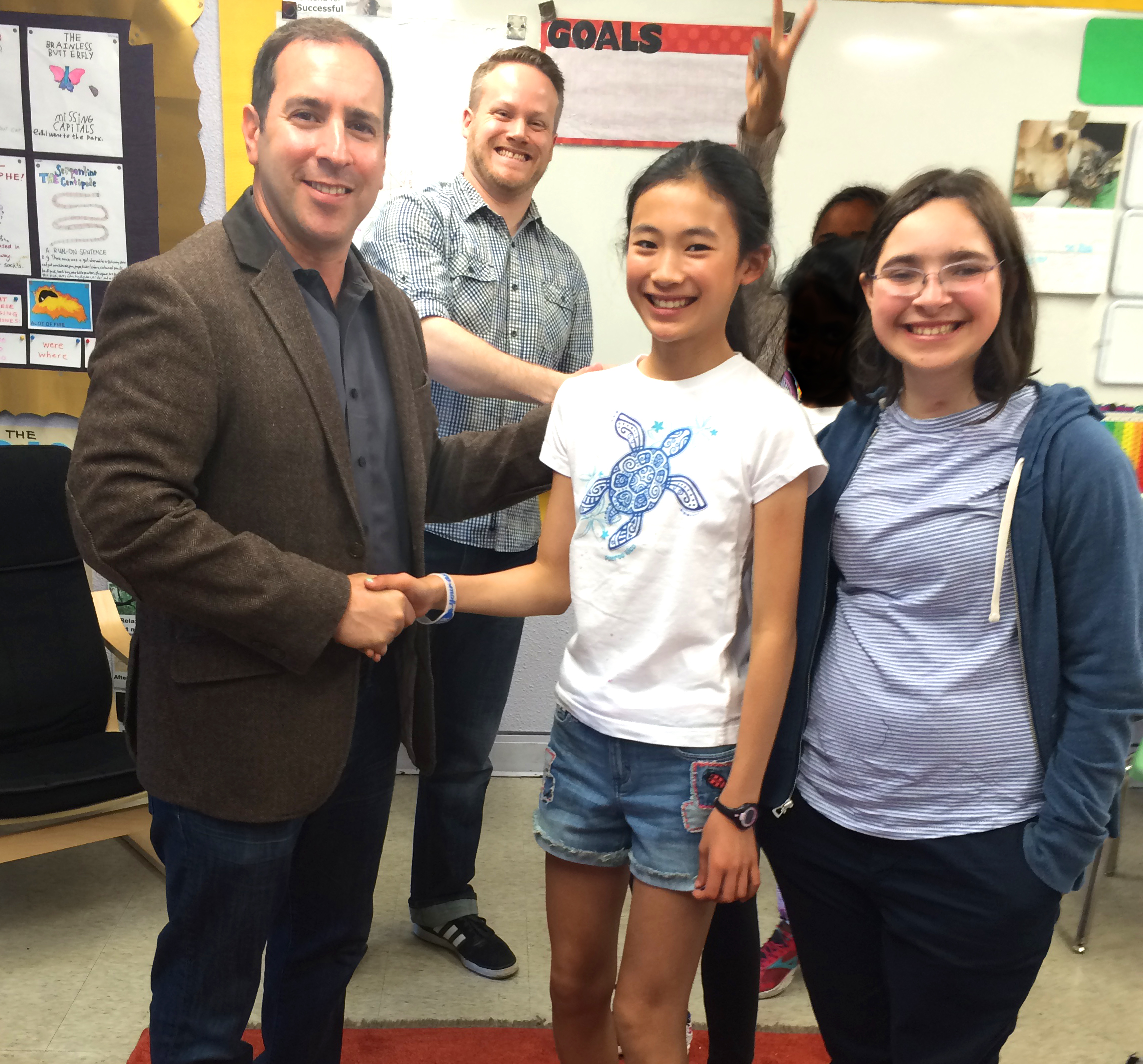 On Monday, June 13, Toronto City Councillor for Ward 22 Josh Matlow returned to the Grade 6 class with an update about their traffic study on Pleasant Blvd. As you may recall, the students undertook a study of jaywalkers and vehicles near the St. Clair subway exit on Pleasant Blvd., and made a formal presentation to our city councillor in order to request a crosswalk. The story was picked up by The Toronto Star and Global News.

Mr. Matlow was accompanied by assistant Jamie Cole and by Troy Caron from the city's traffic department, who oversaw the official study. The girls were excited to hear that the city's study closely matched their own: researchers spent time counting vehicles and pedestrians using the area. The city also recorded the length of time it took each pedestrian to make a successful crossing, which was a key factor in their final decision.

Troy explained that, though the number of people using the crossing exceeded the total number needed for requisitioning a pedestrian cross-over (350 vs. 200), it would be dangerous to add one. This is because drivers would not be expecting another crossing so close to the intersection, which would ultimately give pedestrians a false sense of security.

The class, although disappointed that their research and presentation did not result in a big change in our neighbourhood, understood that the city should use evidence when making important decisions about our city. Serena then made an alternate suggestion: "Could we install speed bumps in that area?" The city representatives thought this was a great suggestion, and promised to revisit it with the council.

Josh Matlow spent some time talking about what happens when city councillors disagree. He said it is healthy to disagree. That way, they can test and challenge each others' ideas and think about things they may not have considered. They have passionate debates—that might make onlookers think the councillors dislike each other—and then go out for coffee together. As long as people are respectful toward each other that's what's important. Screaming and abuse are inappropriate and don't help you win people over to your point of view.

Josh Matlow talked about his personal connection to activism as a child leading to his career as a politician. He concluded by saying "I love your school" and delivered a welcome word of advice about asking politicians important questions. We learned that the city will fund and investigate any traffic questions that are requested by a councillor—but that these requests cannot come from citizens directly. Therefore, making a well-researched presentation to a city councillor is an effective way to make change in our city. Way to go, Grade 6!