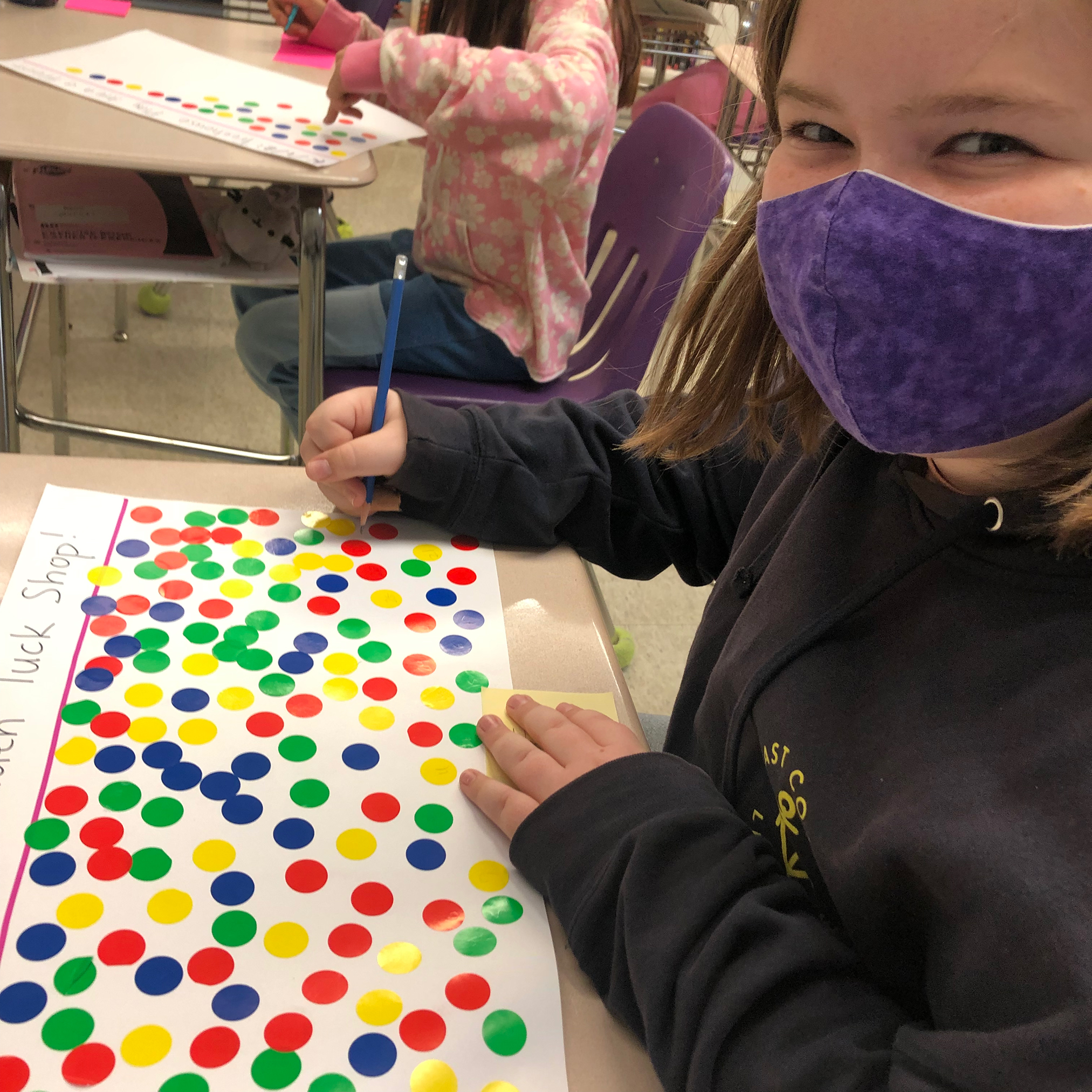 Linden’s annual giving campaign is just around the corner, and this year we are doing something different. Students are involved in every facet of the campaign, starting with input on what projects will be funded by our donors' gifts.

In October, each class was challenged to think of a project that could be funded through donations to the annual giving campaign. They presented their ideas at an All-School event on November 2, led by the Grade 6s. Students then voted on which projects they most wanted to see come to life. 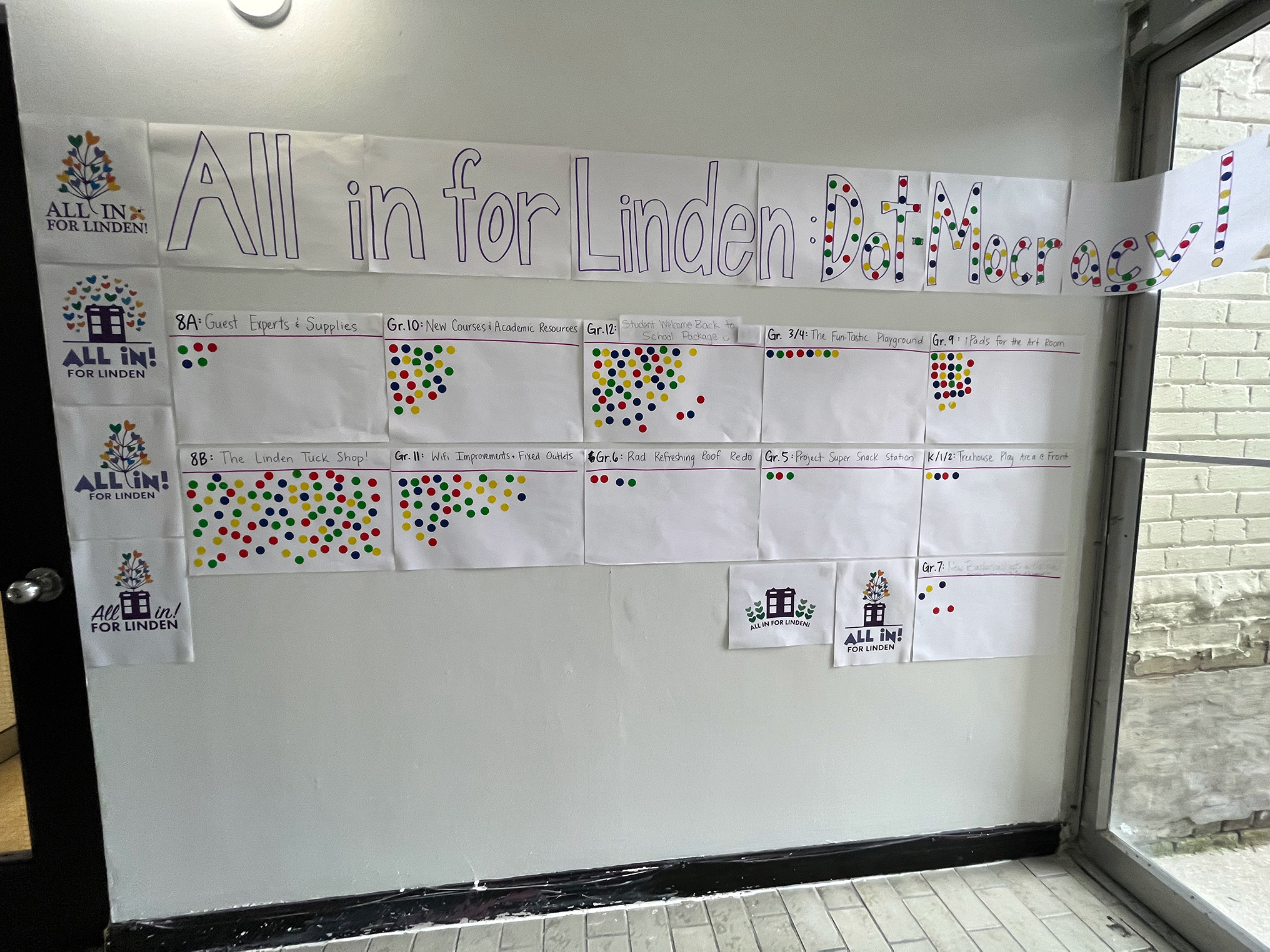 Before the All-School event, the Grade 6s had to select their own project to champion.“Everyone had great ideas!” said Gilly.

“But we didn’t always agree,” said Niamh. “We tossed out the ideas that were unrealistic.”

“They had to be a reasonable price,” added Ugbath, grinning. “It couldn’t cost over $1 million.”

To decide on what their class would pitch, Grade 6 used the dotmocracy process planned for the All-School. Each student was given four dots to use to vote on a project, or projects. All four dots could be placed on a single project, or they could be divided.

“Our class chose a Rad Redo for the Playground!” said Charlotte. 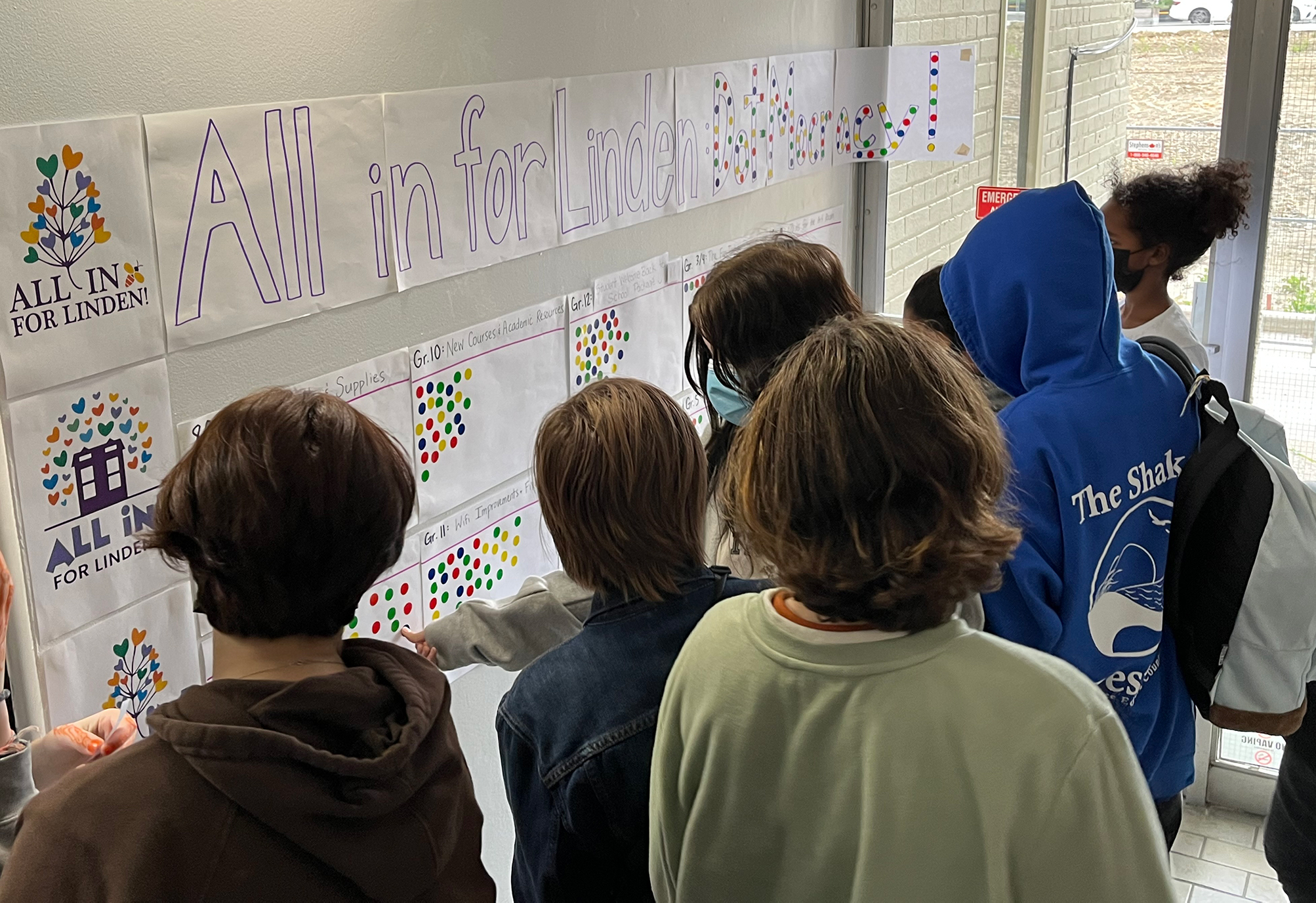 Grade 6s were then charged with a big responsibility: hosting the All-School event and explaining the voting process.

“We wrote our own announcements for greetings,” said Naimh, “and we also wrote a script for the All-School.”

“We wanted it to be fun and funny,” said Maho, “but it was also important that people understood how to vote.”

“On the day of the All-School, we had to be flexible because lots of people were away,” said Gilly. “Some of us had to read when we weren’t expecting to!” added Charlotte.

The Grade 6s were very happy with how it went. “We did great,” said Ugbath. “Everyone cheered and clapped!” 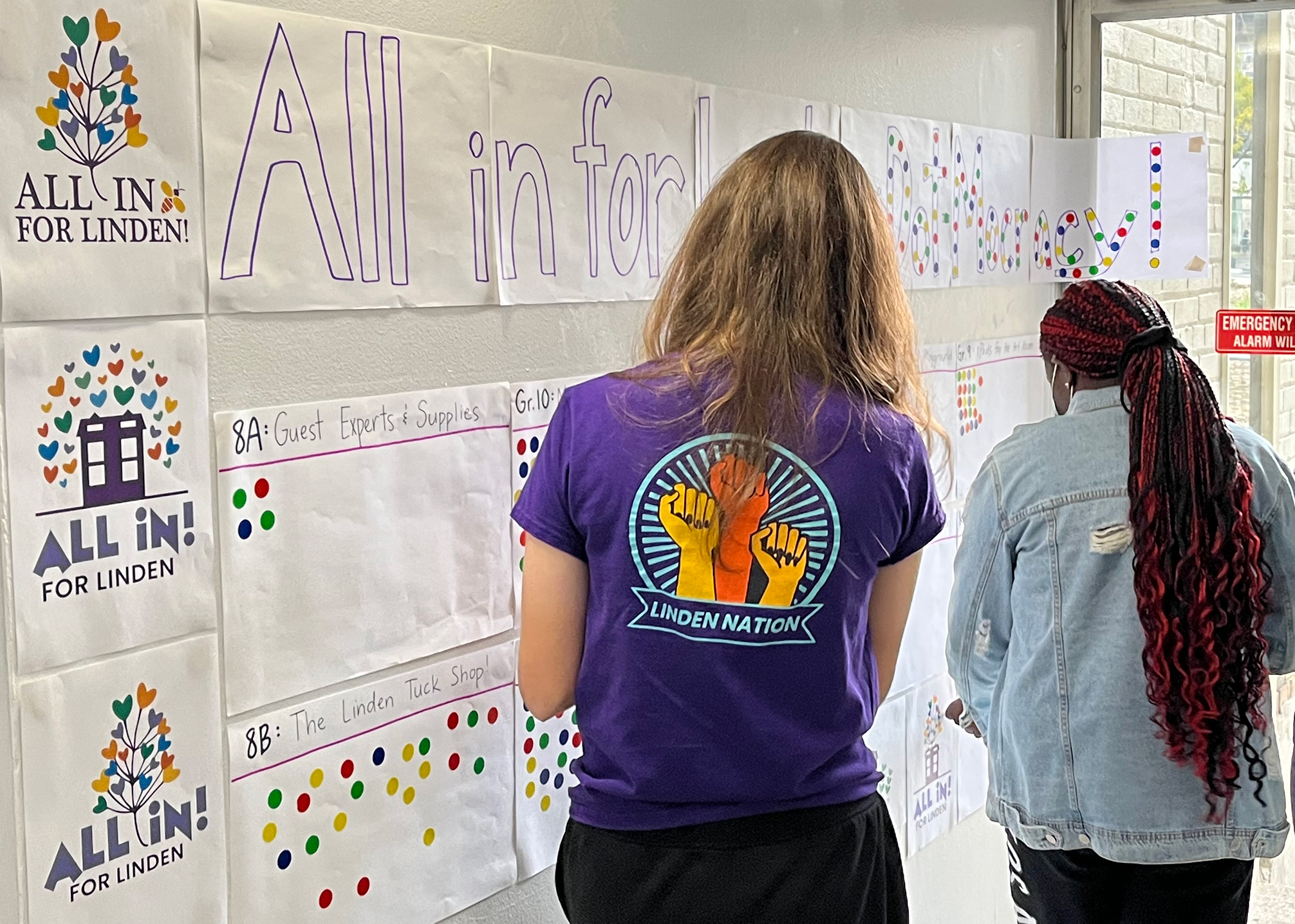 During the All-School event, student-championed projects included different ideas for refreshing the roof and other play areas, technology and curriculum enhancements, along with innovative and entrepreneurial ideas. Final projects will be announced soon.

“We were impressed by the creativity that all ages put into their pitches,” said Savannah. “Students thought carefully about what would enhance the Linden experience for the entire school, not just their peers. They also considered equity and sustainability.” 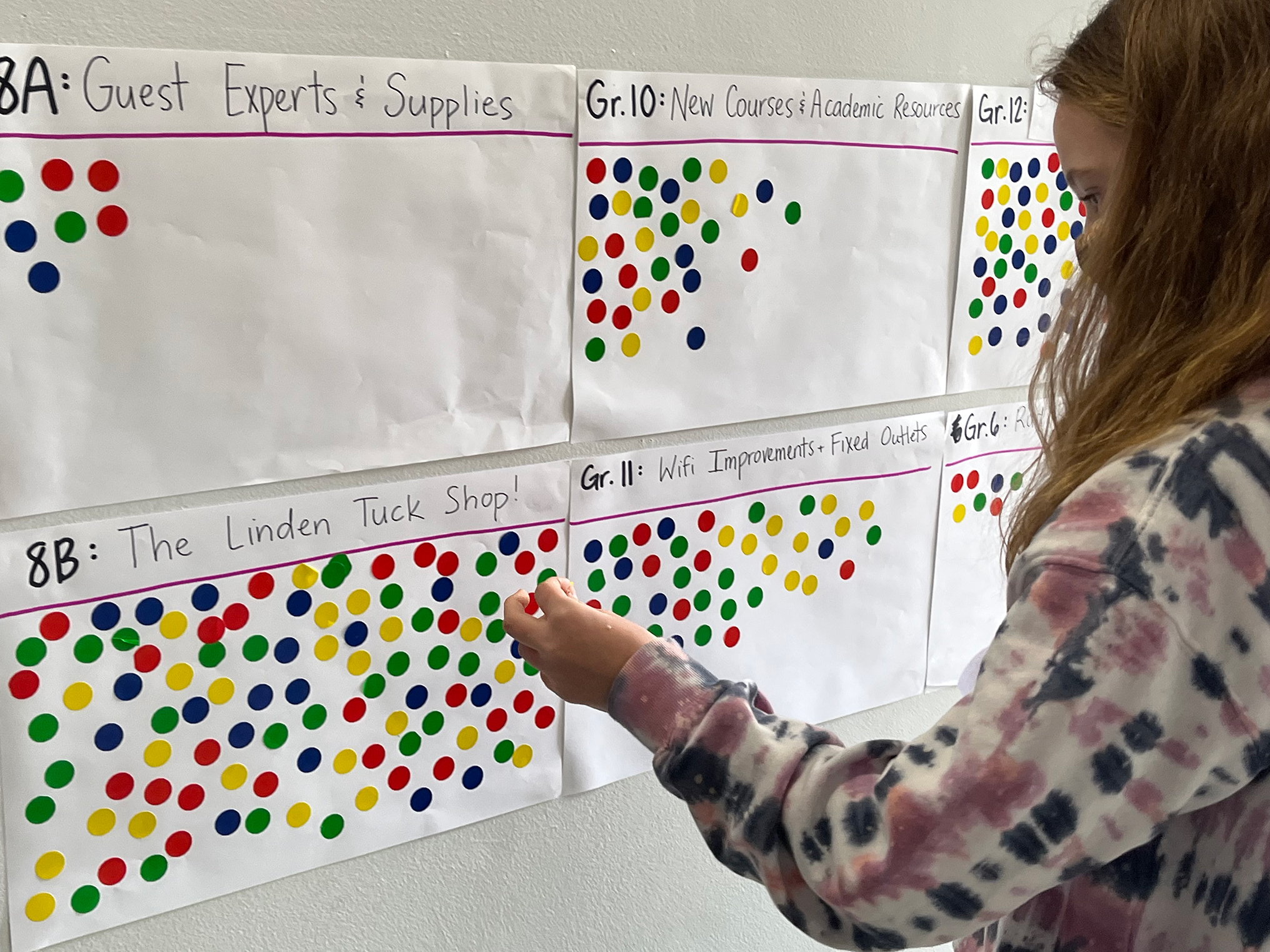 Grade 6s were also charged with counting the votes — or the dots — which Savannah incorporated into a math exercise. Students estimated the number of dots each project received, and then counted them and compared the two numbers, often double and triple-checking each other’s work. Voting was very close, and Savannah used this opportunity to illustrate the importance of voting.

In addition to the grade 6s, other teams of students have begun working on design, event planning and communications. Watch for the unveiling of the student-designed logo, and final projects in the near future! 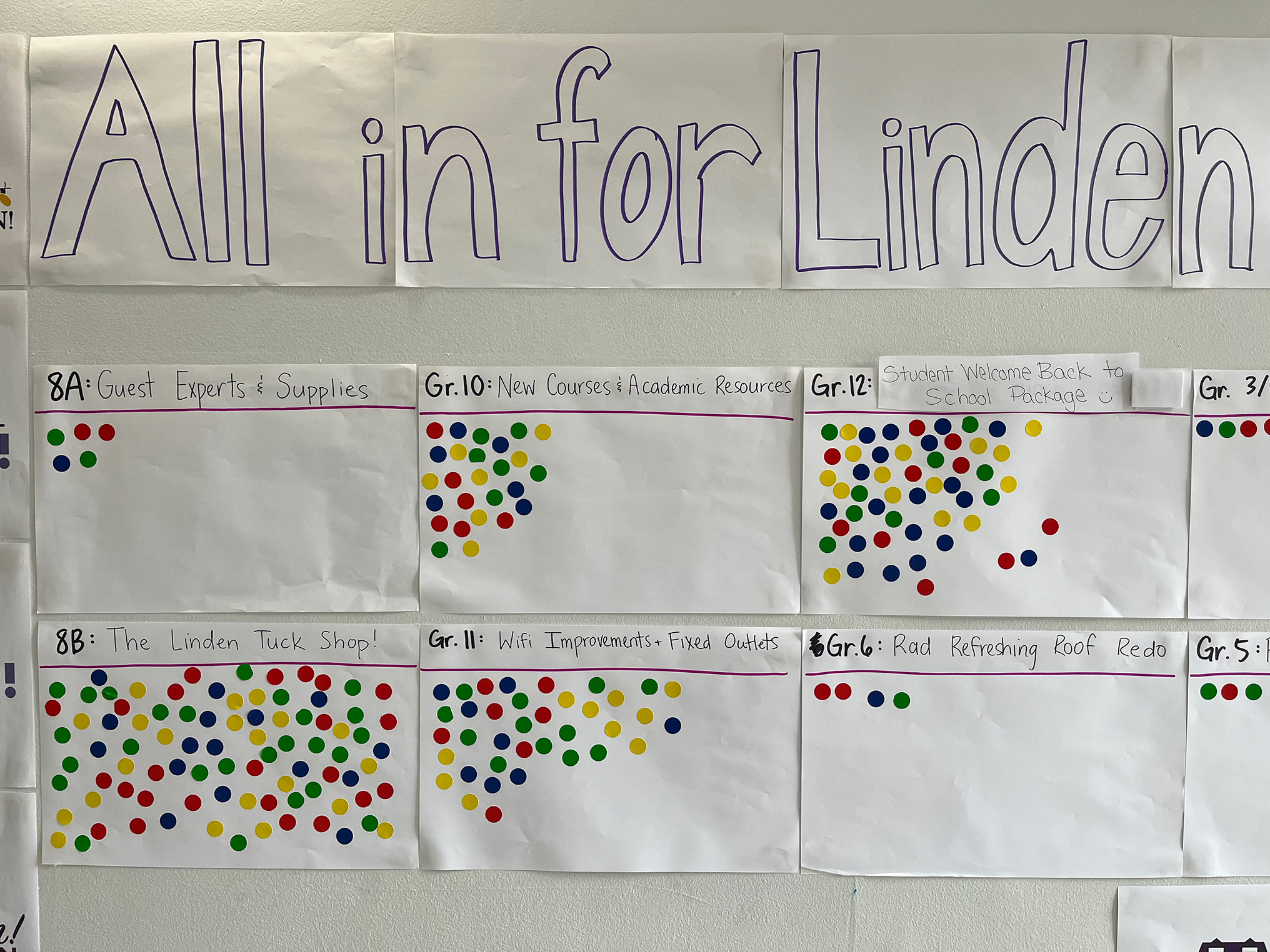