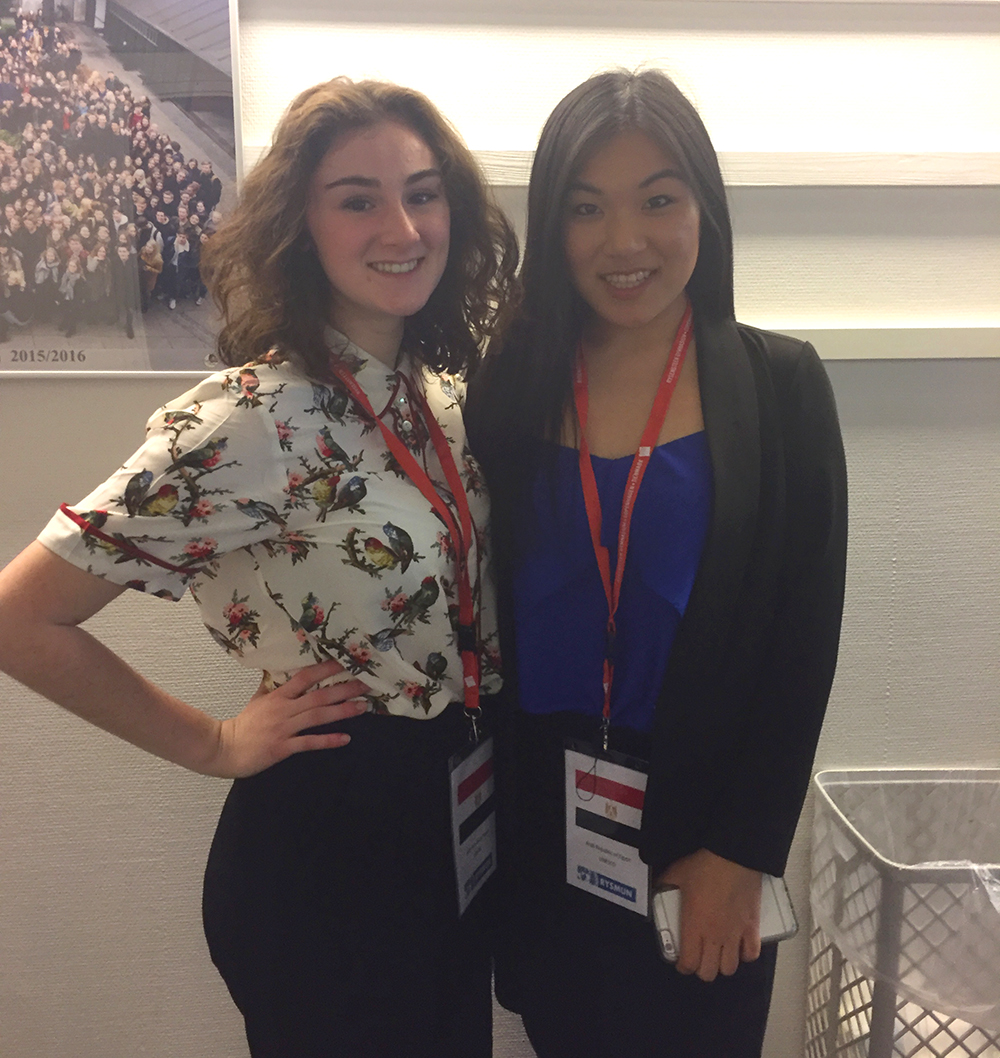 Linden students from Grade 11 participated in Rysensteen Gymnasium’s Model UN in Copenhagen, April 23-30, 2016. Below is the third in a series of blogs our students shared with us.

April 27, 2017: Today was our first day experiencing the Model UN at the Danish school Rysenteen Gymnasium. We arrived at the school separately at the early hour of 8:00 am. When we arrived and met up outside, we became part of a massive sea of teens in suits and business attire. We walked inside and went to a big room where the opening ceremony was being held with around 250 participants. As soon as we sat down, the speeches started to proceed. The first was by the school's headmaster saying how proud they were to be hosting the Model UN conference for the sixth year in a row, followed by two adults who were actually part of the United Nations program itself. The first to speak was a man named Mogens Lykketoft; I honestly don't remember what he talked about because I was half asleep and the speech was very boring.

The second person to speak was a woman named lle Fenger, and she gave a very interesting speech about a 14-year girl from Afghanistan who had become pregnant. She talked about the importance of educating girls on reproductive health and the right to their bodies. She also went on to talk about the crucial need for girls' education, not only in third world countries but also everywhere.

After the speeches were over, we went to our classrooms where the debates would be held. There was a big mix-up between Emma, Toni and myself about the countries we were representing and the rooms we were assigned. I arrived in my room and was extremely intimidated by the whole atmosphere; I looked around and found a card with the Egyptian flag on it and sat down. Promptly afterward, I saw a frazzled Emma walk in and get a huge sense of relief thinking that she would be sitting beside me, because I thought she was representing Denmark. I was wrong. We were in the wrong room and frantically trying to figure things out before the somewhat annoyed co-president of the model UN club escorted me to the right room.

I was finally able to find my spot and waited for the day to start. The room was big with a U-shaped table around it and a white board at the front.

We started promptly and began with the dreaded introductions; having to stand up in front of 25 strangers isn't most people's cup of tea. We were supposed to state our name, school, and the colour of our toothbrush. The majority of the people in the room attended Rysensteen, with a few people from other countries. After the introductions, things started to get real. We were told to make a speech on why we did or did not support the topic being debated, and once again we had to stand up and speak aloud. We then had to walk around and mingle with all of the other delegates from different countries and see which countries we could make an alliance with and who should be our allies. It was scary going around and talking to people and having to ask their opinion and whether or not to stick with them. I teamed up with USA, Turkey, Denmark, United Kingdom, Ireland, France, and Iran. We started debating promptly after and it was intense, everybody seemed to know what they were talking about and had extensive knowledge on the topic. Not only that, but they also seemed to know the proper mannerisms to deliver their debate.

We debated for around 3.5 hours and had a lunch break where we went back to the big conference room for sandwiches and water. We went back to our respective rooms afterward and continued debating our topics. During the afternoon a dress code team came in and examined everyone's attire to make sure they were following the proper protocol. If you did not, you were called upon and were asked to step out of the room to be lectured about your attire - luckily this did not happen to any of us. Although we were all very intimidated by the whole atmosphere and did not really know what was going on, Toni got very into it and was interviewed by the delegate of Germany about how and why she should sell the pyramids, because she was representing Egypt. They did a video interview, and we were told it was going to be on their Facebook page, although it did not go up after all.

We were told you could wear attire that represents your country, so the delegate of China went all out and wore a Chinese dress on the first day, and a uniform on the second. This prompted a debate about whether or not it was culturally appropriate (we still firmly believe it's not) but she won the prize for the best-dressed delegate in the end.

After a long day at the Model UN, we all met up and went to an art museum. The museum was in the central part of Copenhagen and was very easy to find. We walked around for about and hour.

It was a long day, but we were somewhat ready to do it again.