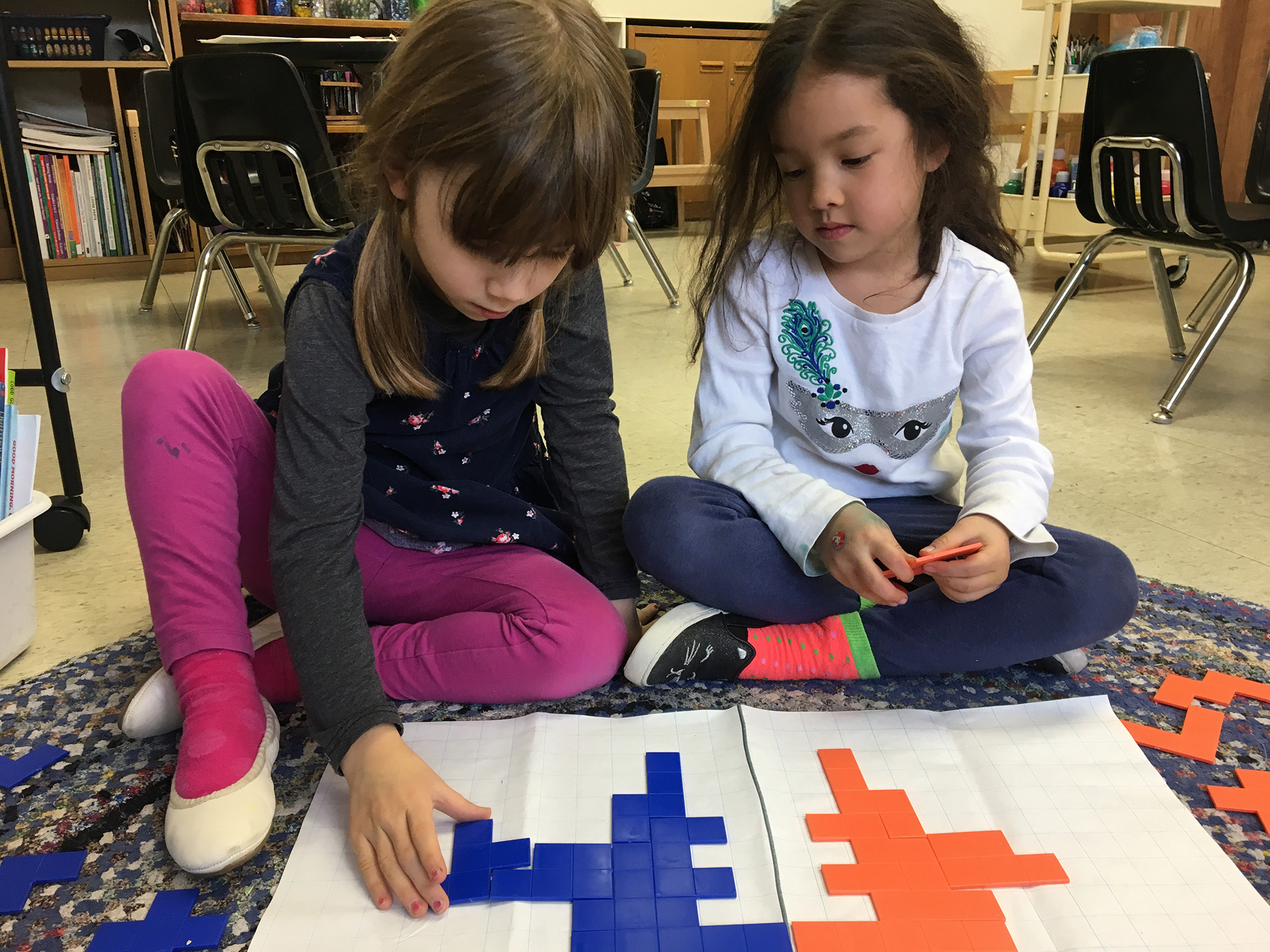 As we quickly approach the end of the term (and report card season for me), I begin to take more time than usual to reflect on the learning that the girls are engaged in, the growth that they have made over the course of the term, and their individual goals for the next term. It's also a nice time to return to some of our favourite provocations in the classroom, as well as try out new things before the term is over. This week we took on a new math challenge using pentominoes, experimented with the rain, and were heavily inspired by a large floor puzzle. Enjoy the pictures from the week. 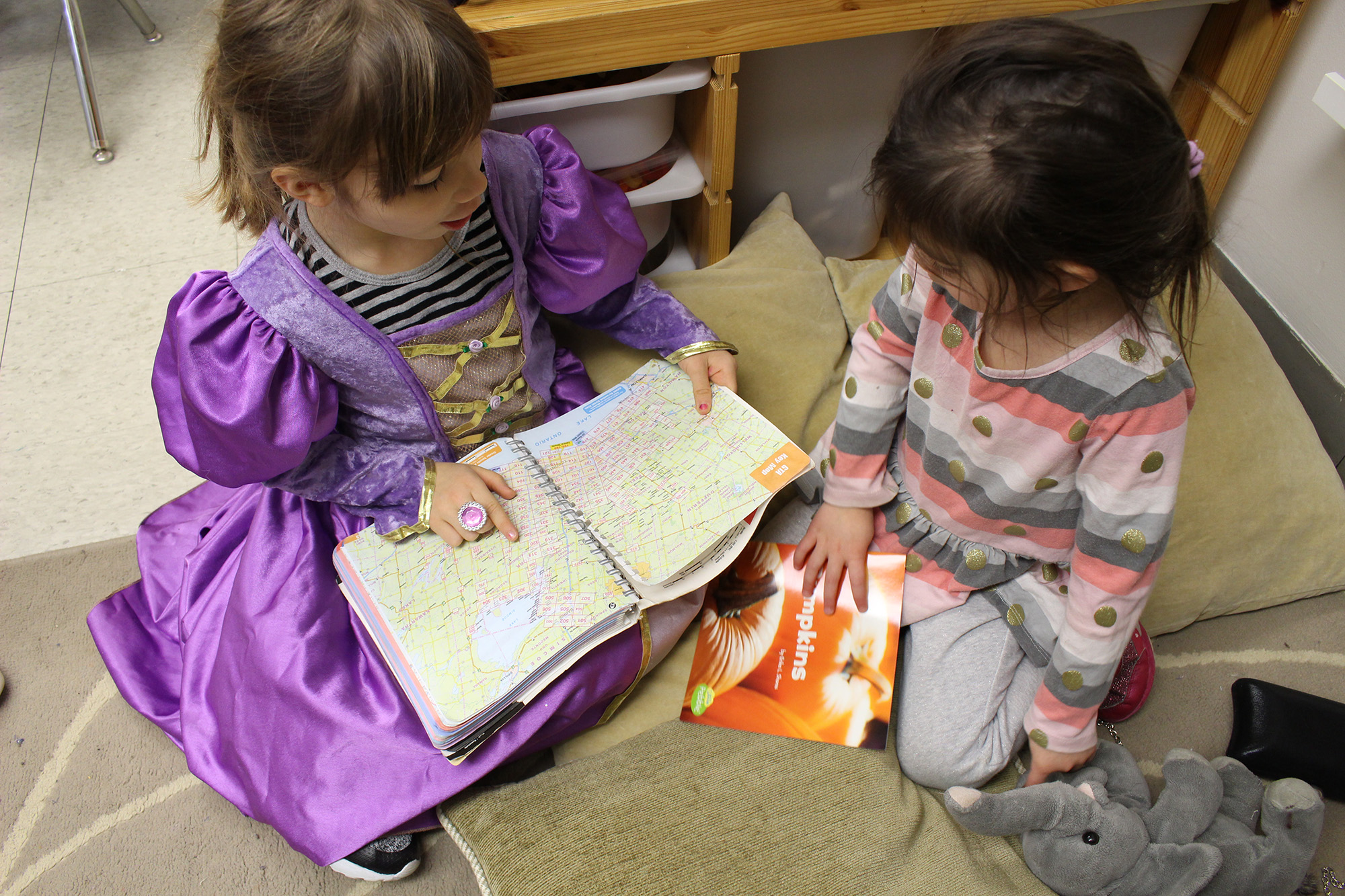 A and O plan their trip while playing at the Drama centre this morning. A shows O how far away she wants to travel. 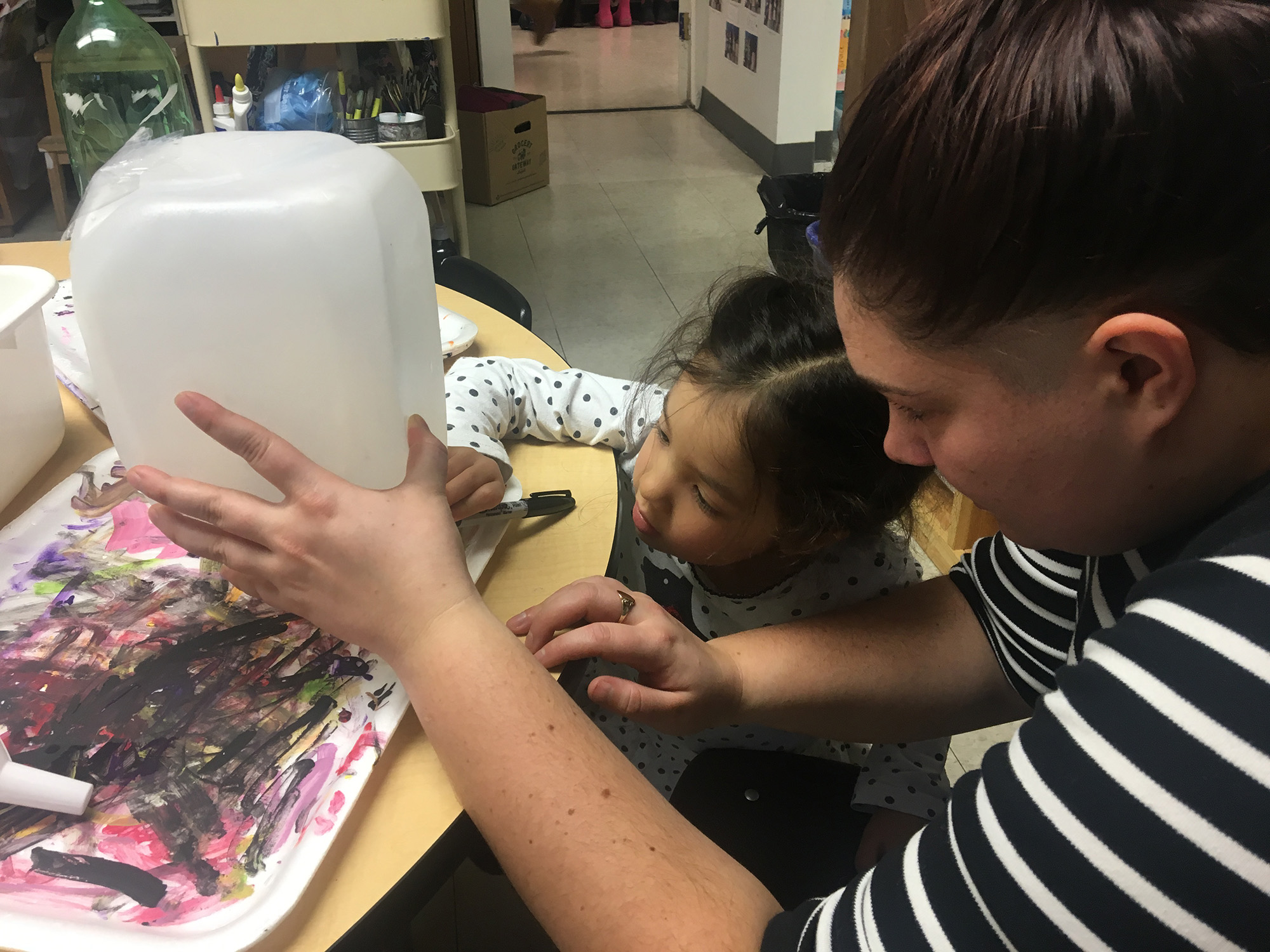 Ellen and N work together to create a rain catching tool during today's Outdoor Ed. class. We discussed how we are able to catch the water and then water the plants on the roof with it. N pours in one cup of water and then marks the line on the jug so that we have our own measuring system on the roof. 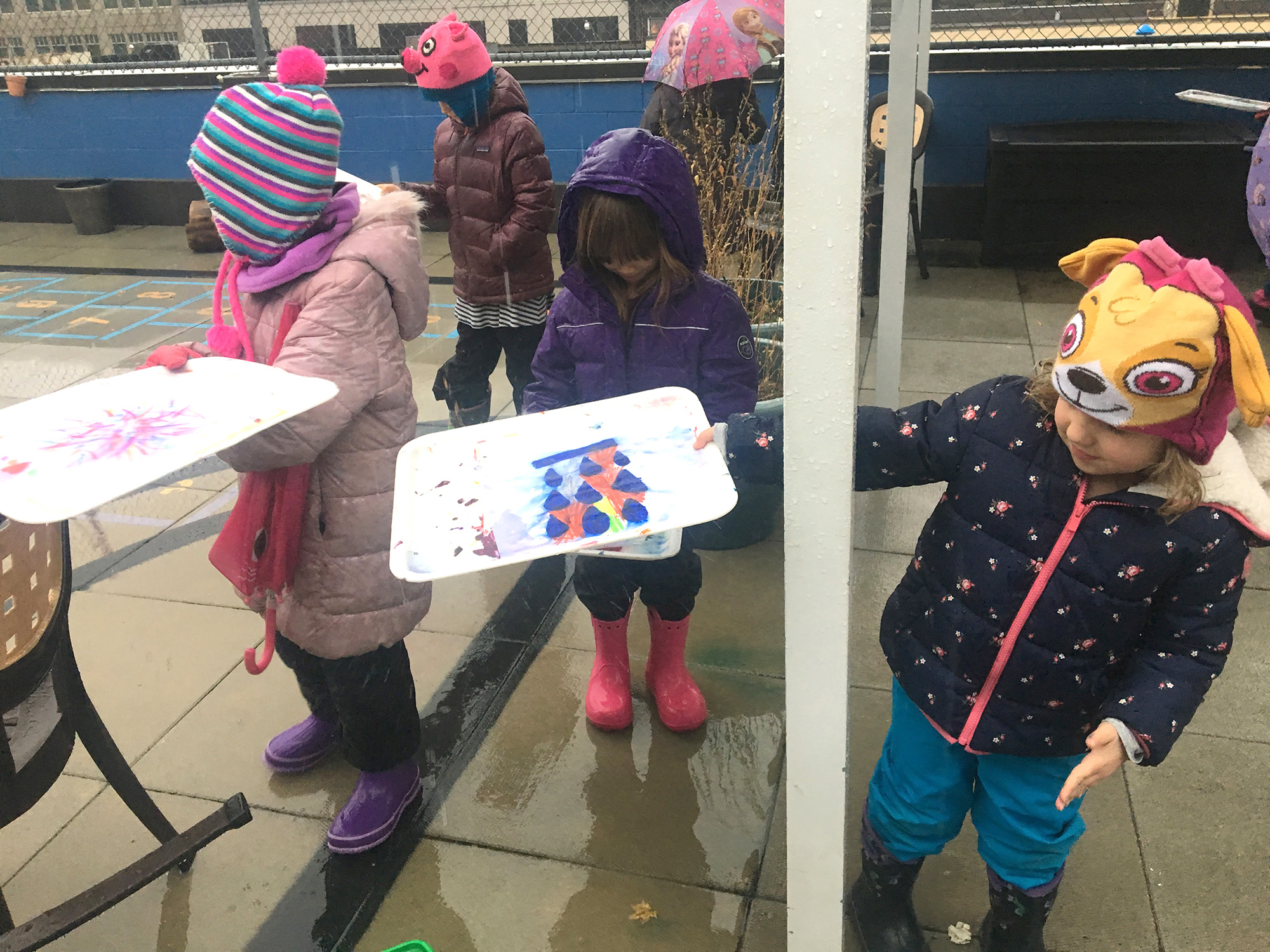 AB, AK and A (grade 1) hold their marker drawings under the rain spout to see what will happen when the rain hits the paper and marker. They're not sure yet whether the marker will be completely erased, or just spread around the paper. 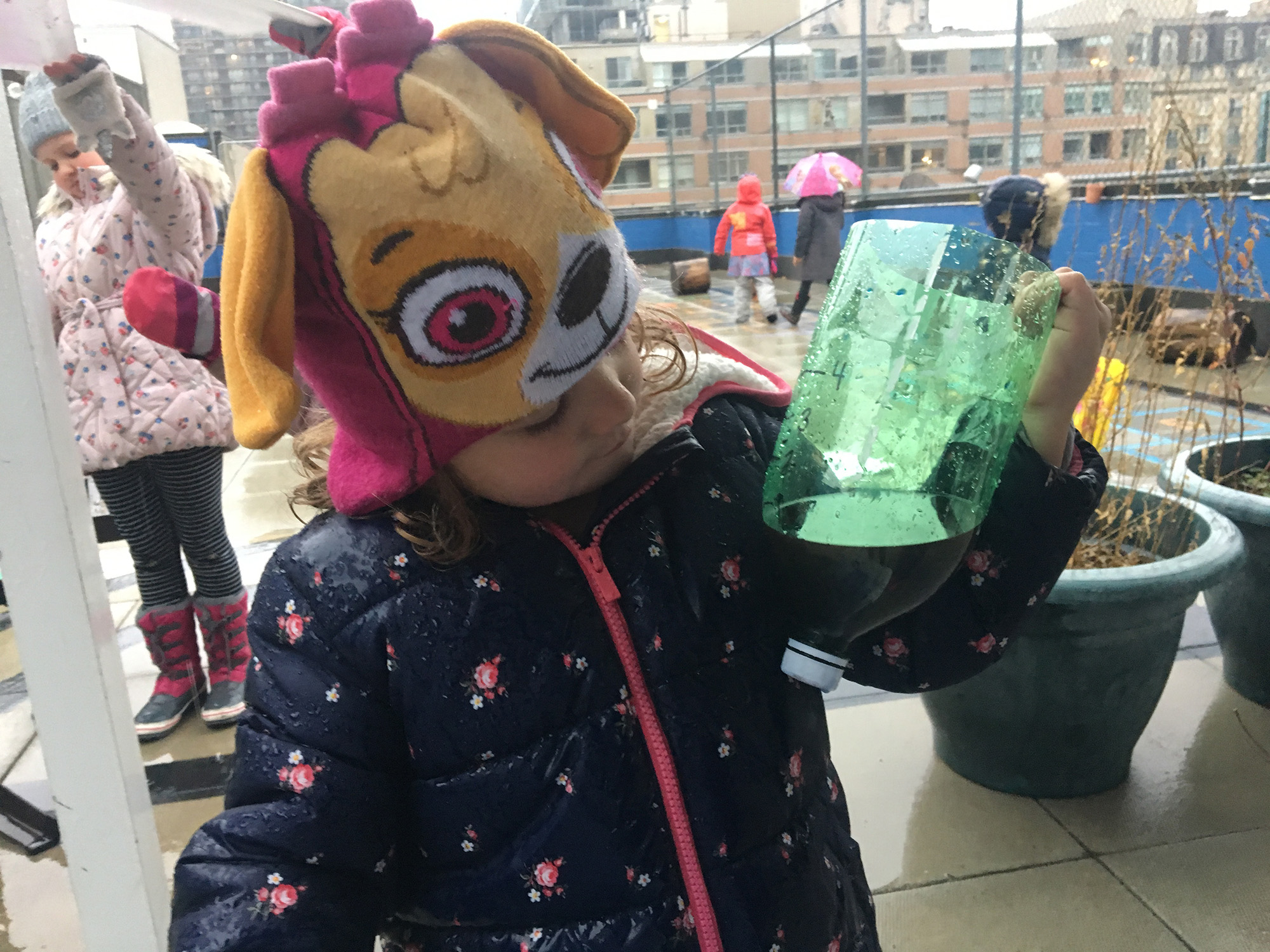 A collects the marker-coloured rainwater that she has gathered on her tray in one of the handmade rain catchers. She examines the measurements along the side to see how much water she has collected so far. 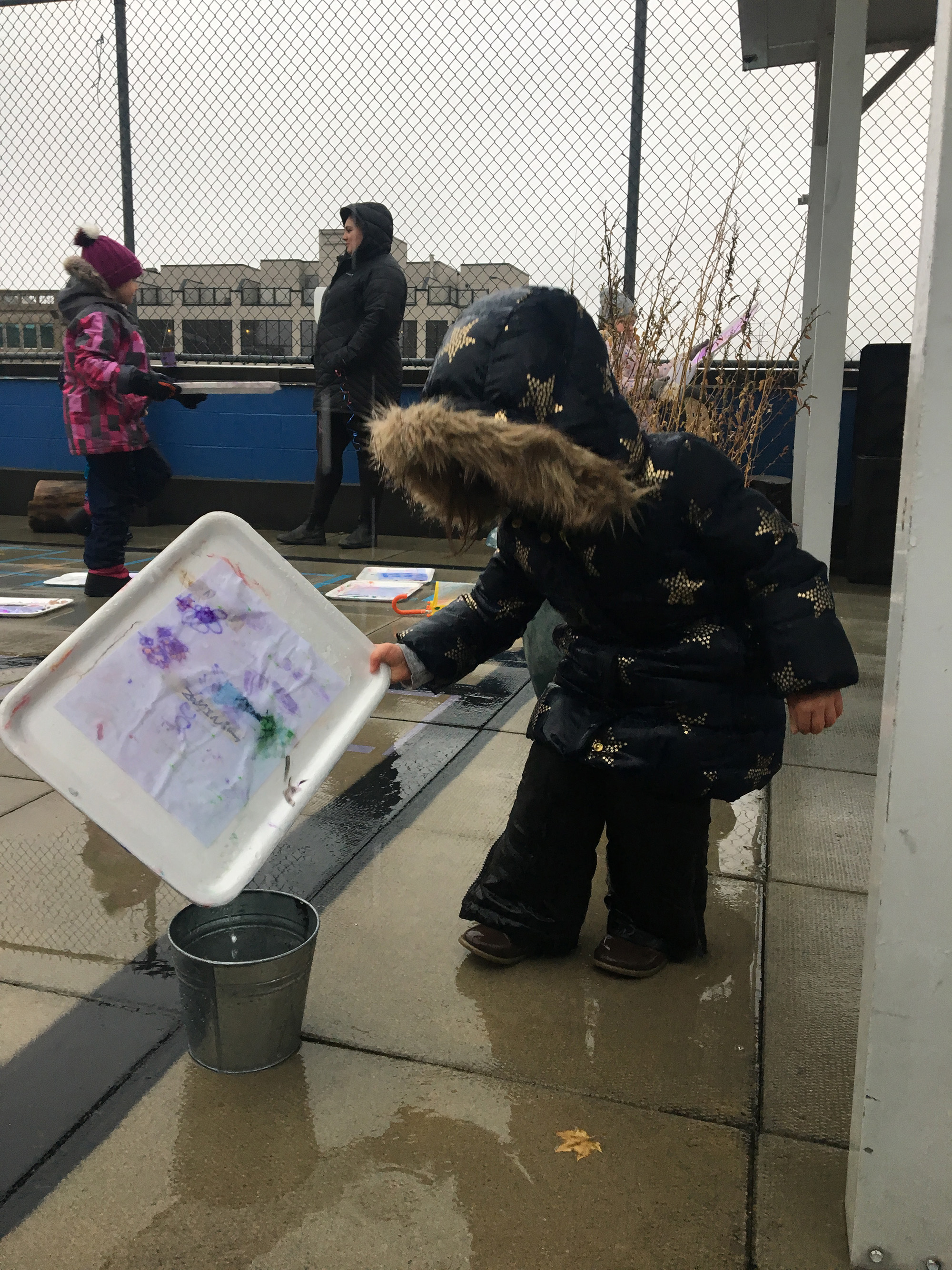 O lets the rainwater pool on her paper, and then she drips the water into the bucket to collect it. I wonder how much she will be able to pour in this way. 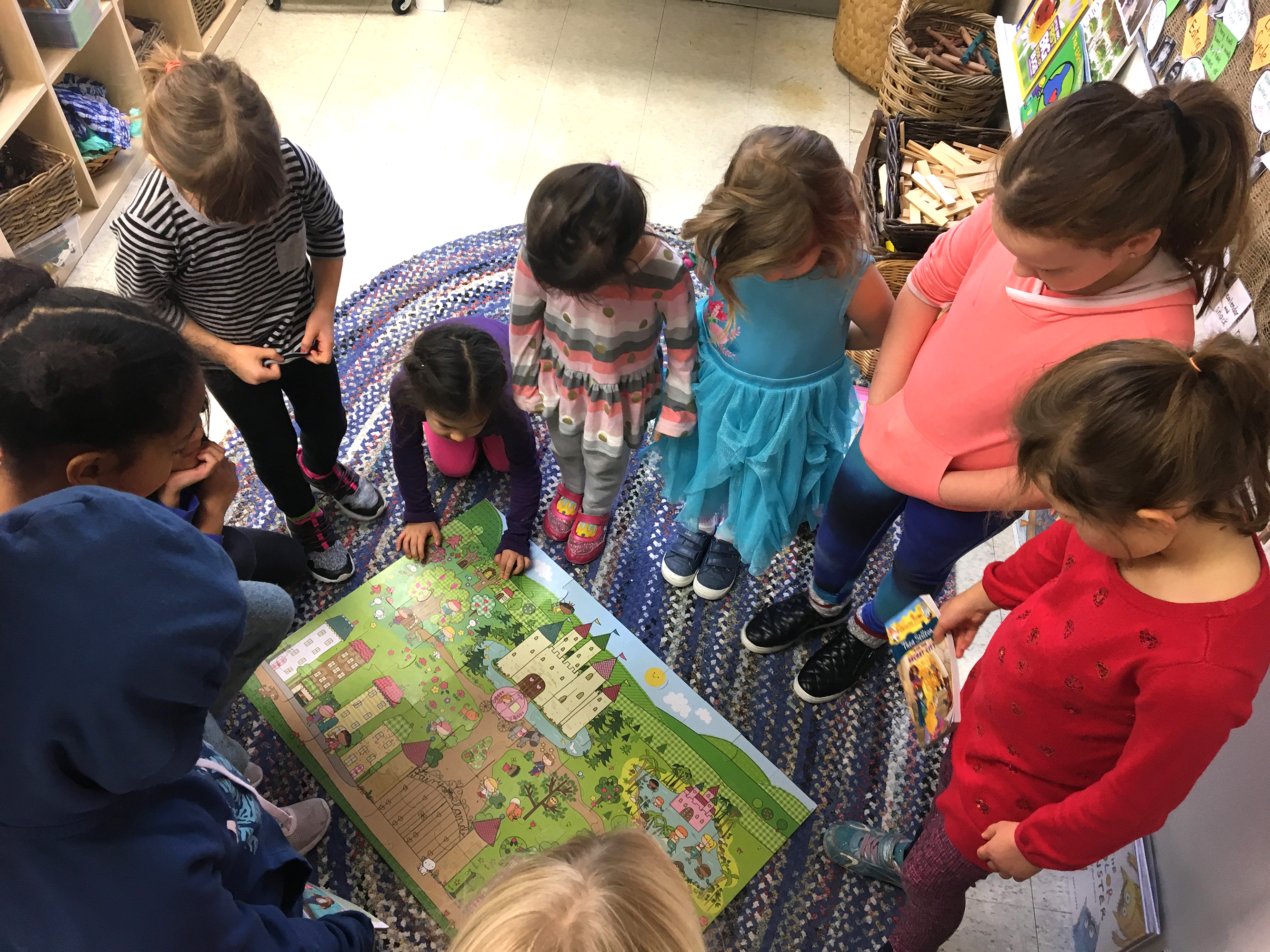 The grade 1-2s take a look at the puzzle that the Early Learners completed together. The girls are proud of their hard work and excited to look for all of the details on the puzzle. 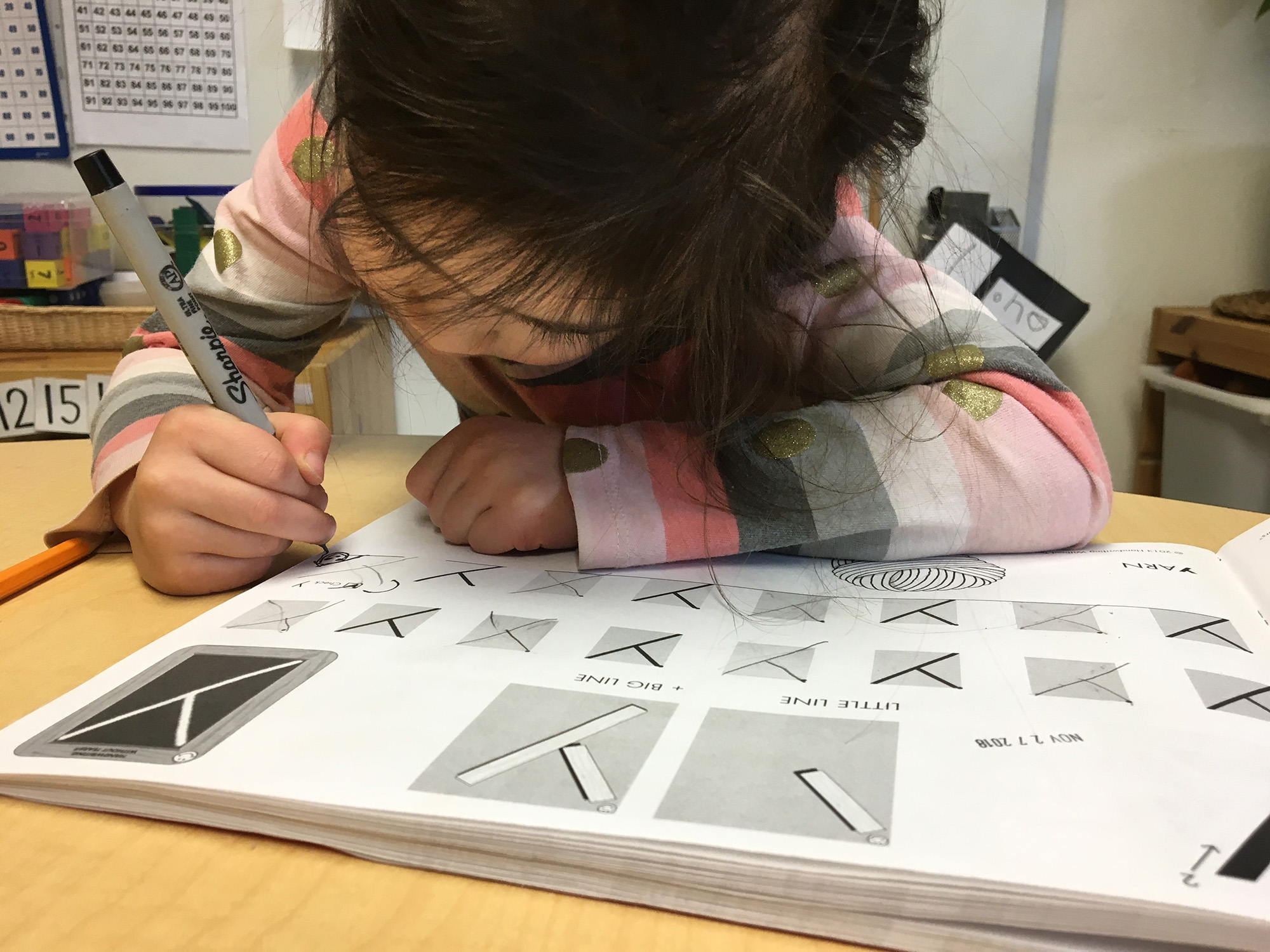 O draws a smiley face on her best "Y" after practicing printing many of the letter. I believe that it is important for the girls to learn effective, quick, and simple ways to form the different letters, both uppercase and lowercase, to support them as writers. 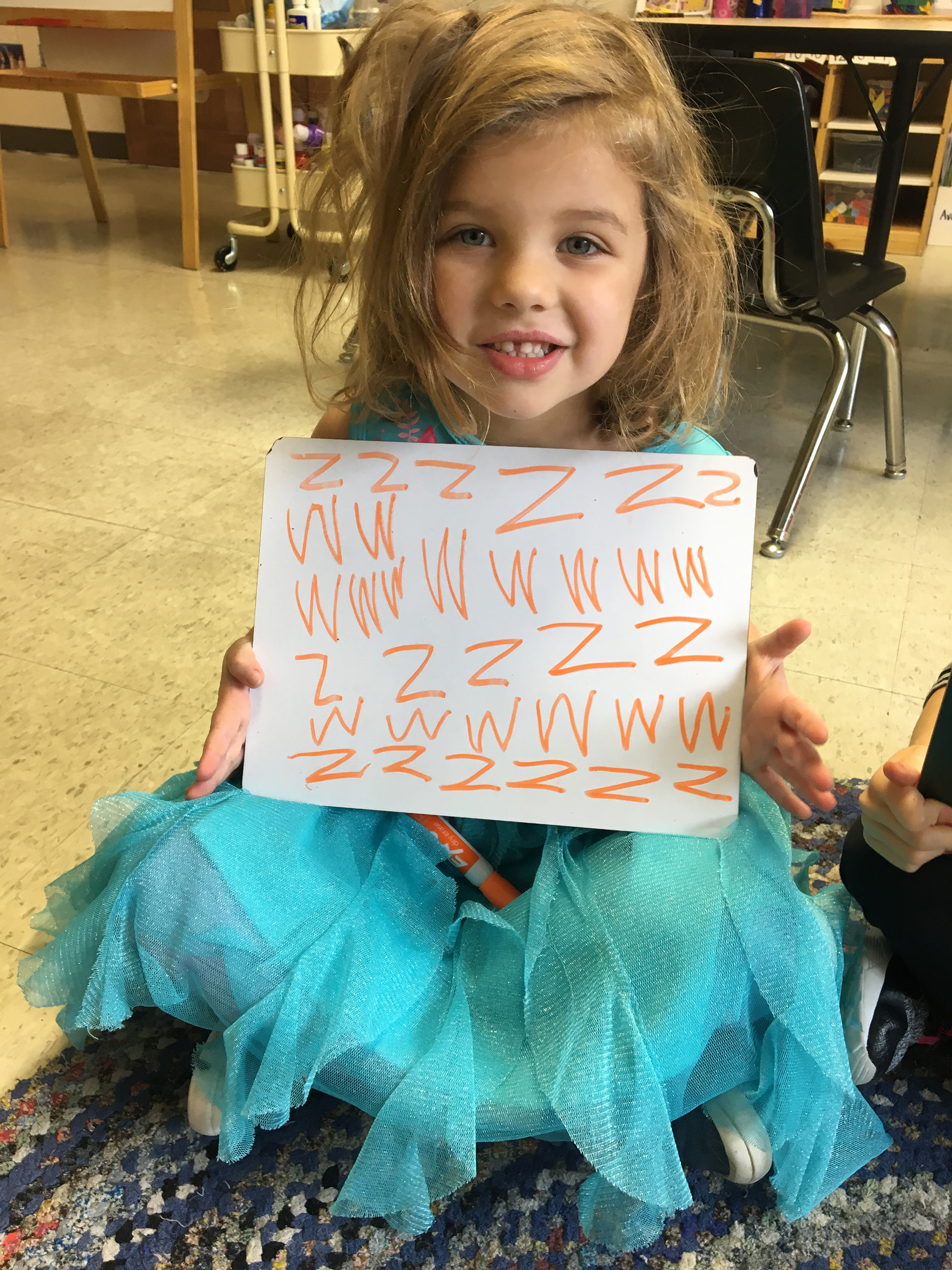 A shows off the many /z/s and /w/s she has written after the class learned about the sounds that these letters make. She reads out her entire board sound-by-sound. 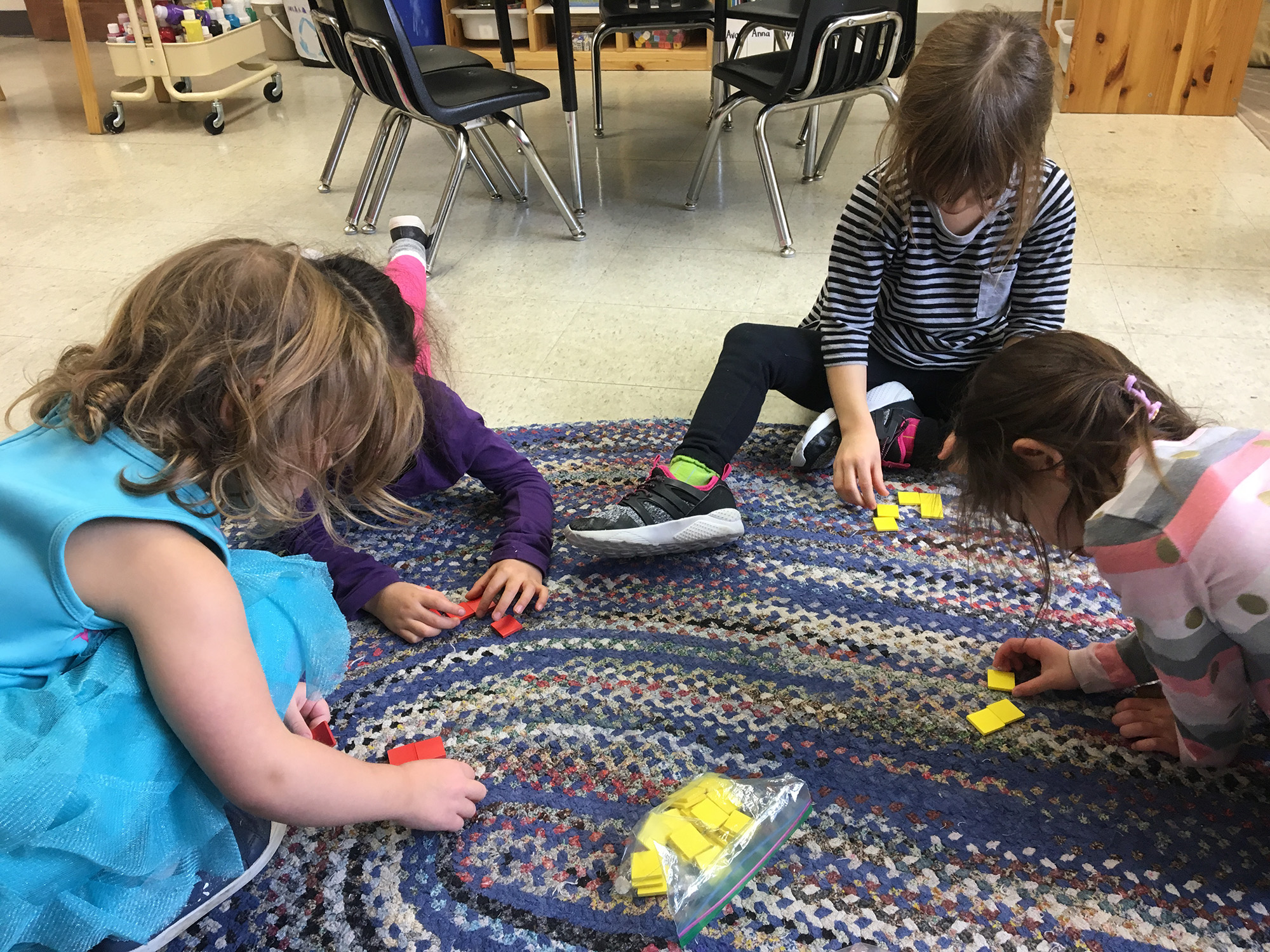 The Early Learners are working on a geometry challenge - create as many configurations using five squares as possible, while making sure that each square is connected to at least one other by one side. 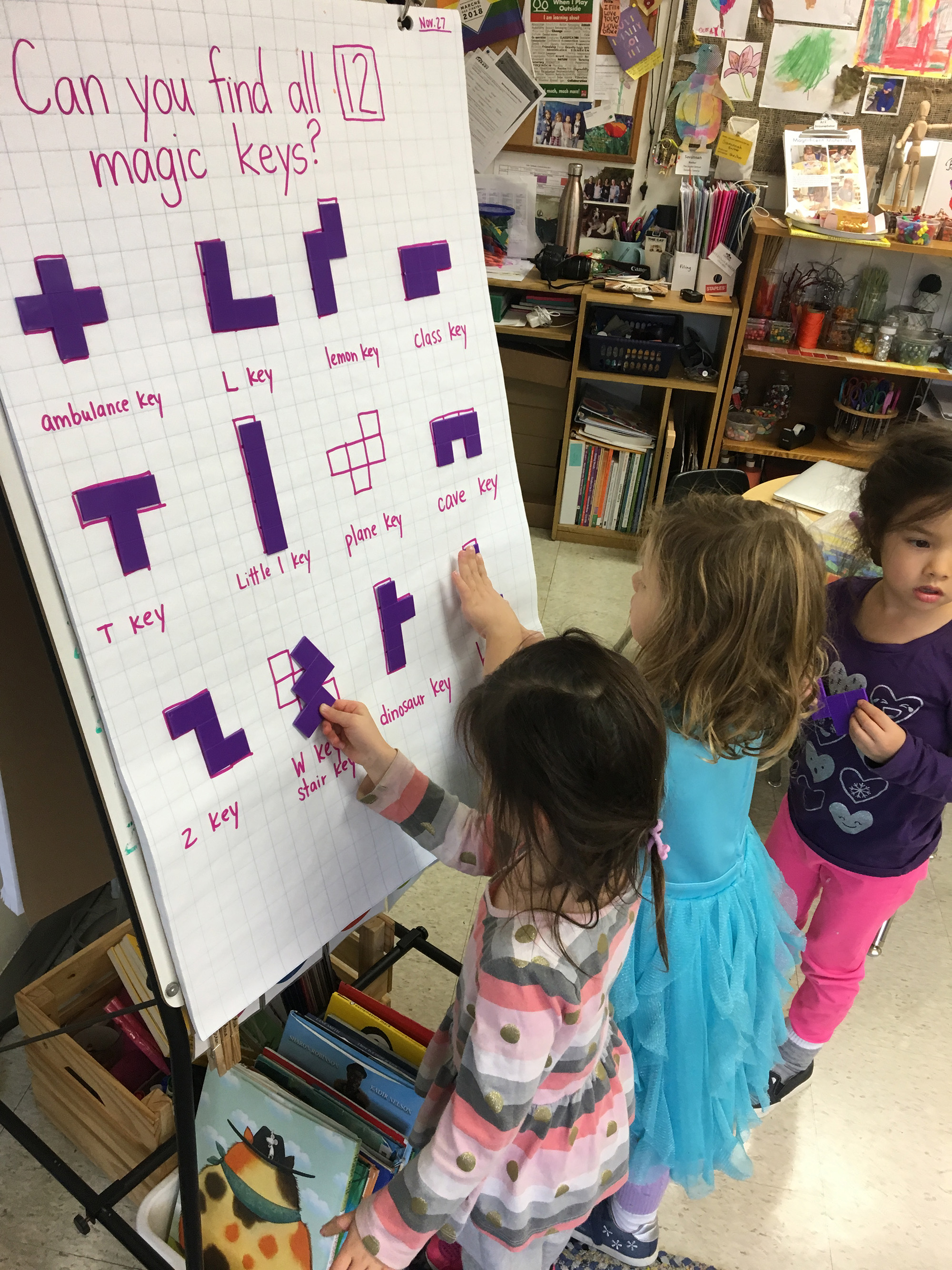 They have found all twelve possible "magic keys", also known as pentominoes, to unlock the castle and rescue the prince from the fire-breathing dragon! Each student matches three pentomino pieces with the keys that were discovered and named. 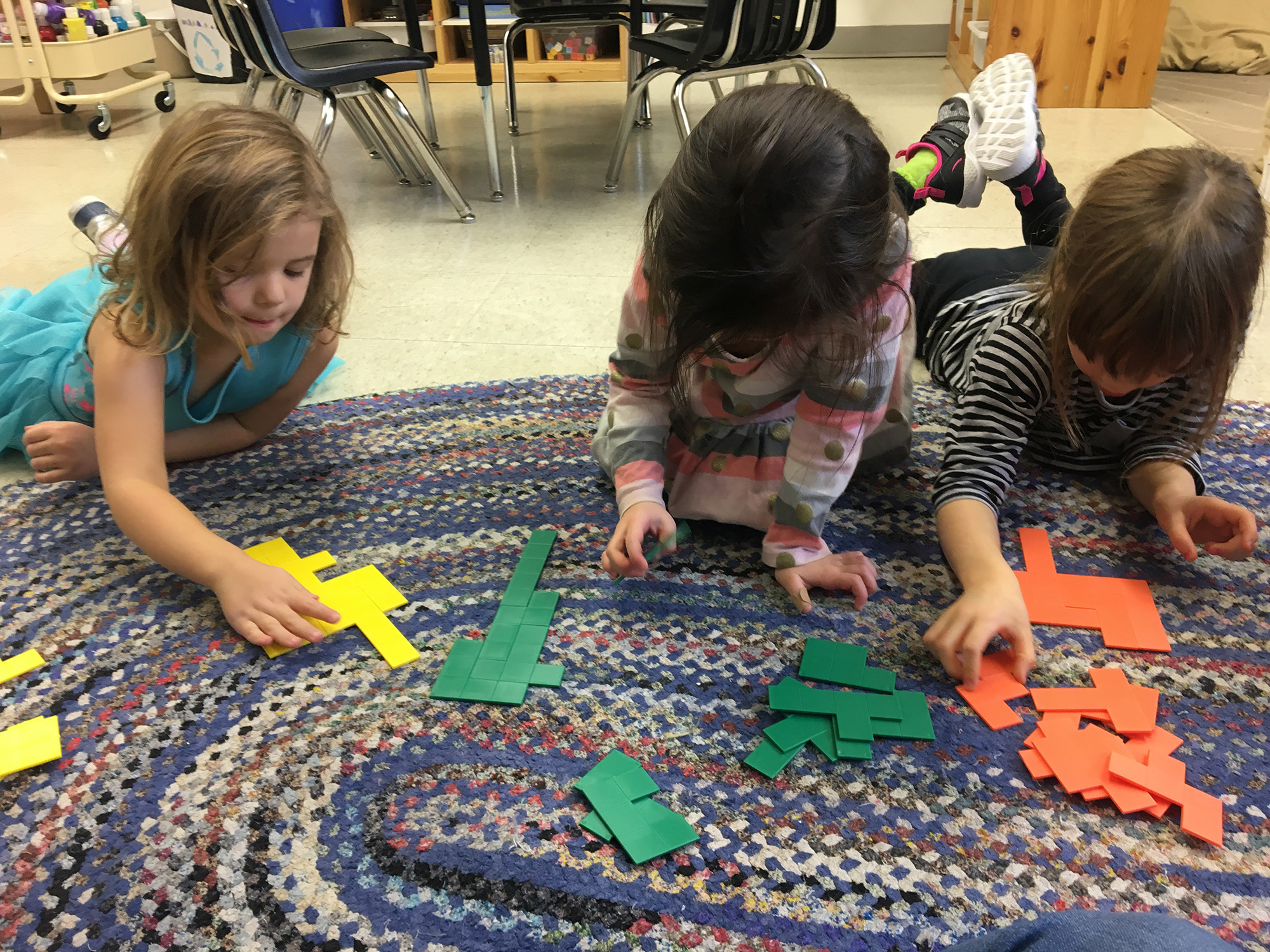 The girls spend some time exploring the pentomino pieces after their hard work. They notice how they fit together and form new shapes. The girls especially enjoy using their invented names while they work. 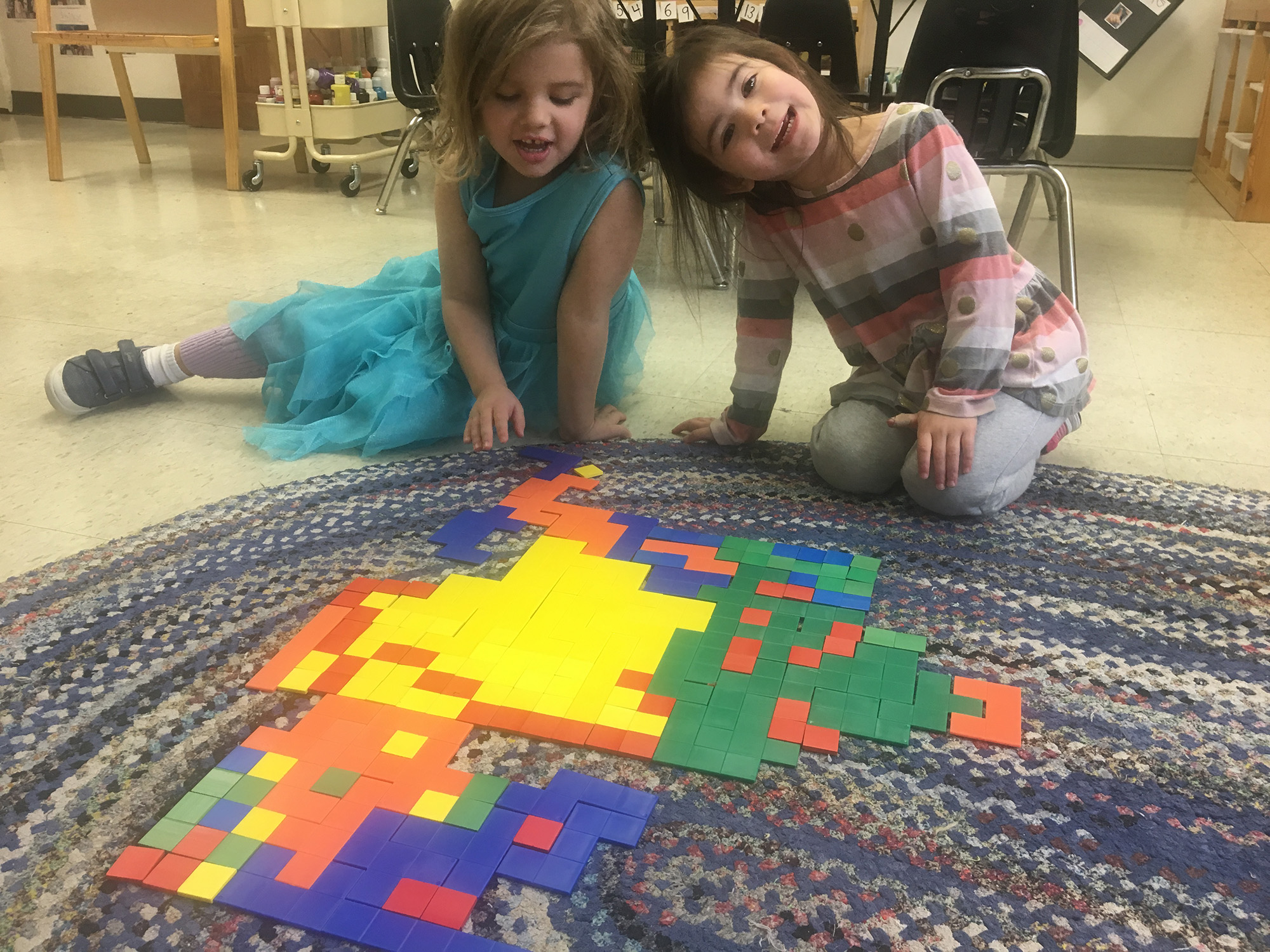 A and O decide to combine their pentominoes, as well as some of the squares from earlier in the lesson, to create a giant design. O wonders if the design has more than 100 squares in it, so we count them together. After only counting the small section farthest from the girls, we reach 100, so O realizes that there must be even more than 100 squares in the entire design. 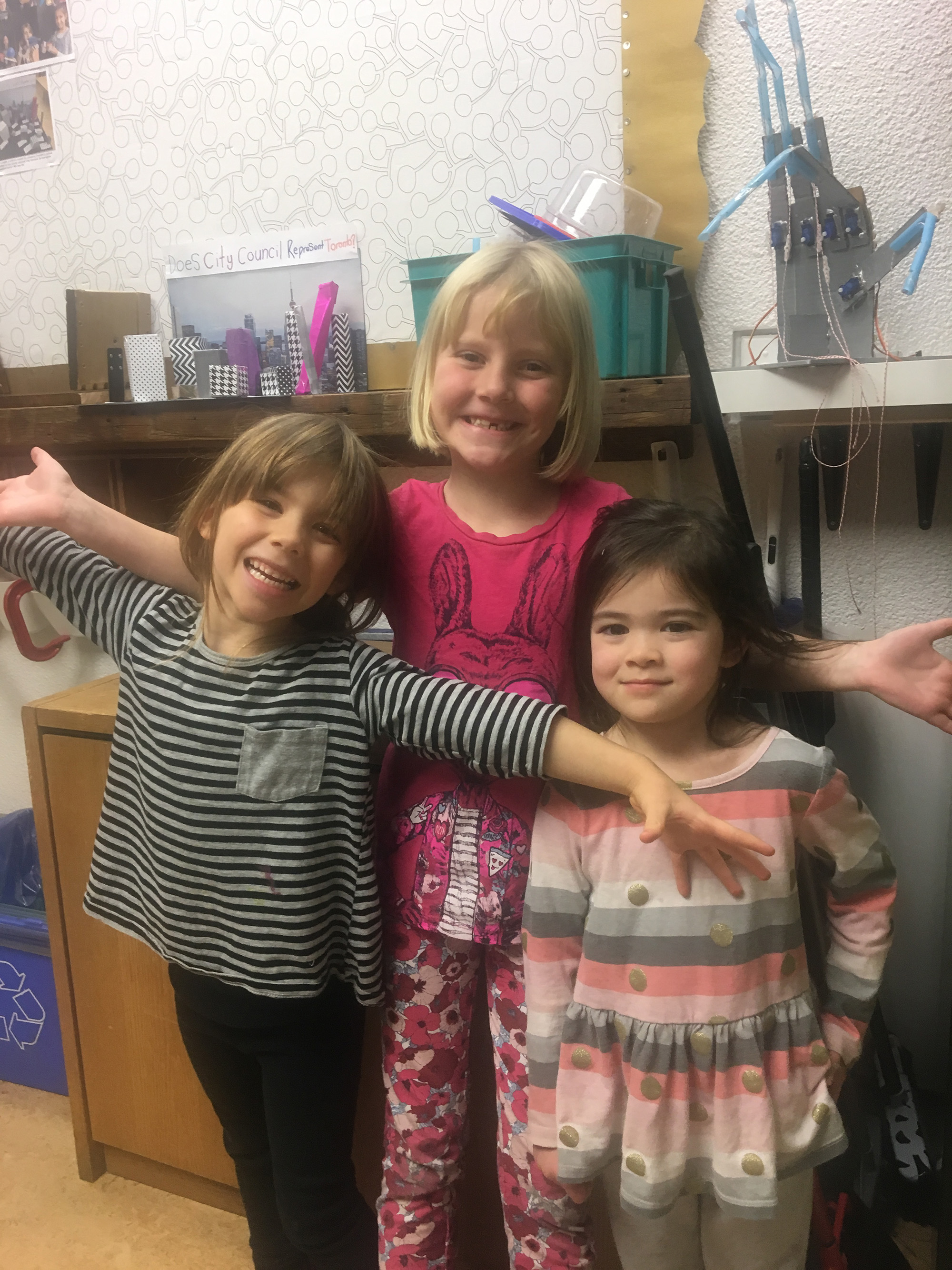 Today in CERES we are talking about ways to share photos online and the importance of getting photo consent from the people in the pictures. Guest photographer, K (in grade 2) snapped this great shot of A, G (grade 1) and O. 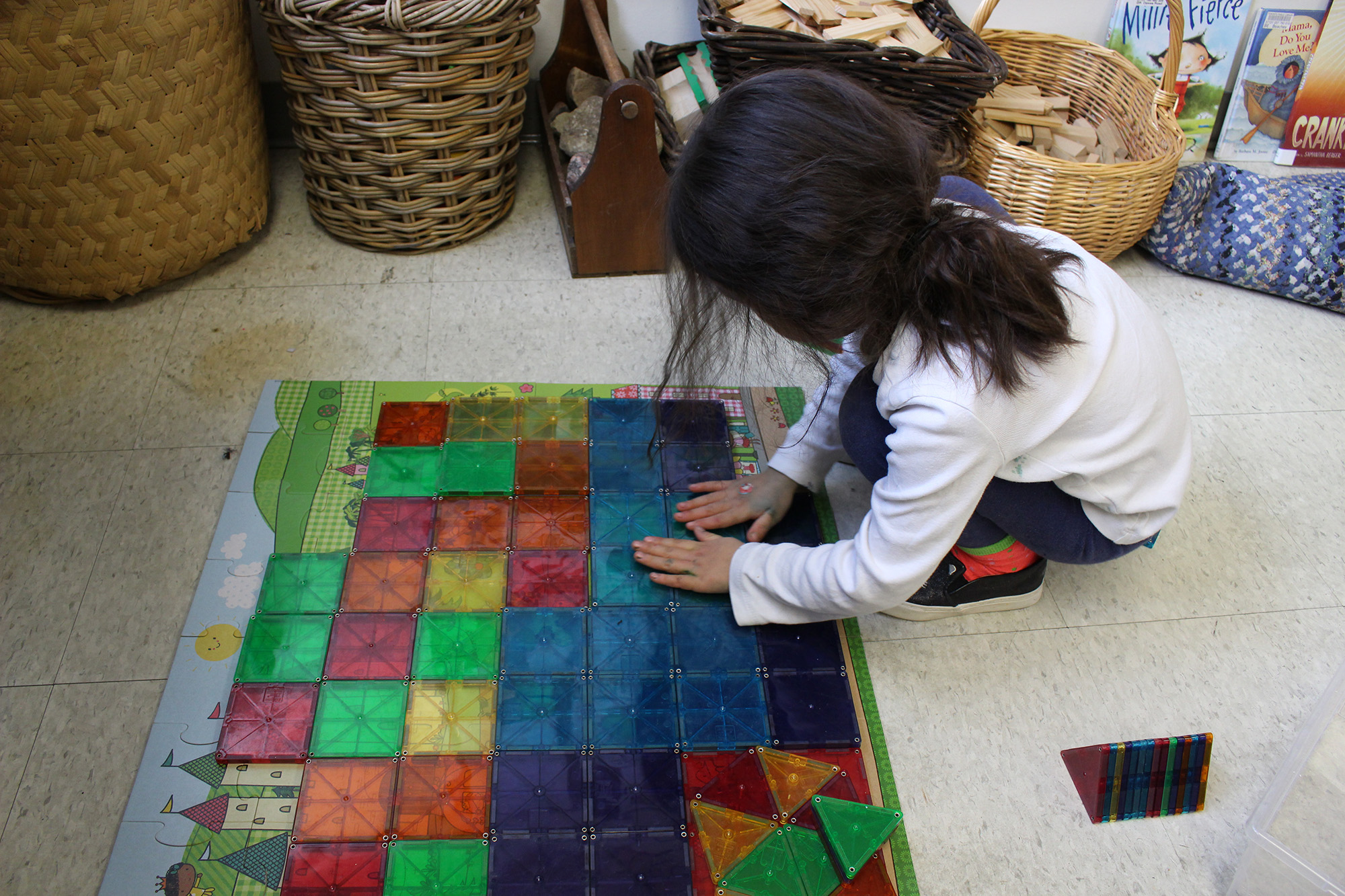 N uses the floor puzzle as her base while at the Building centre. 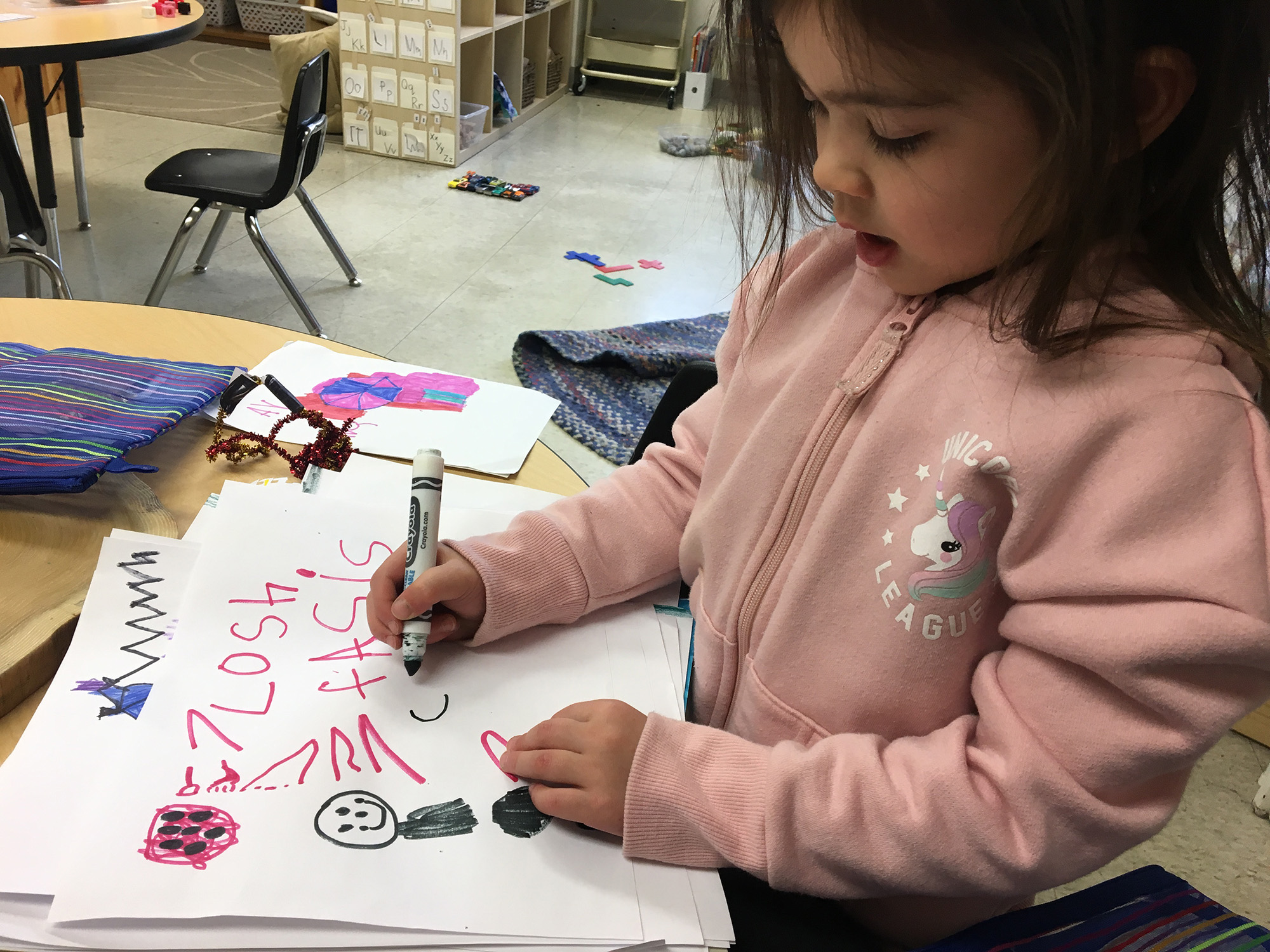 O makes a sign for the grocery store that she has designed at the Math centre - a great way to incorporate literacy and writing into a new area of the classroom! Her sign reads "losh (lunch); fasis (faces)". 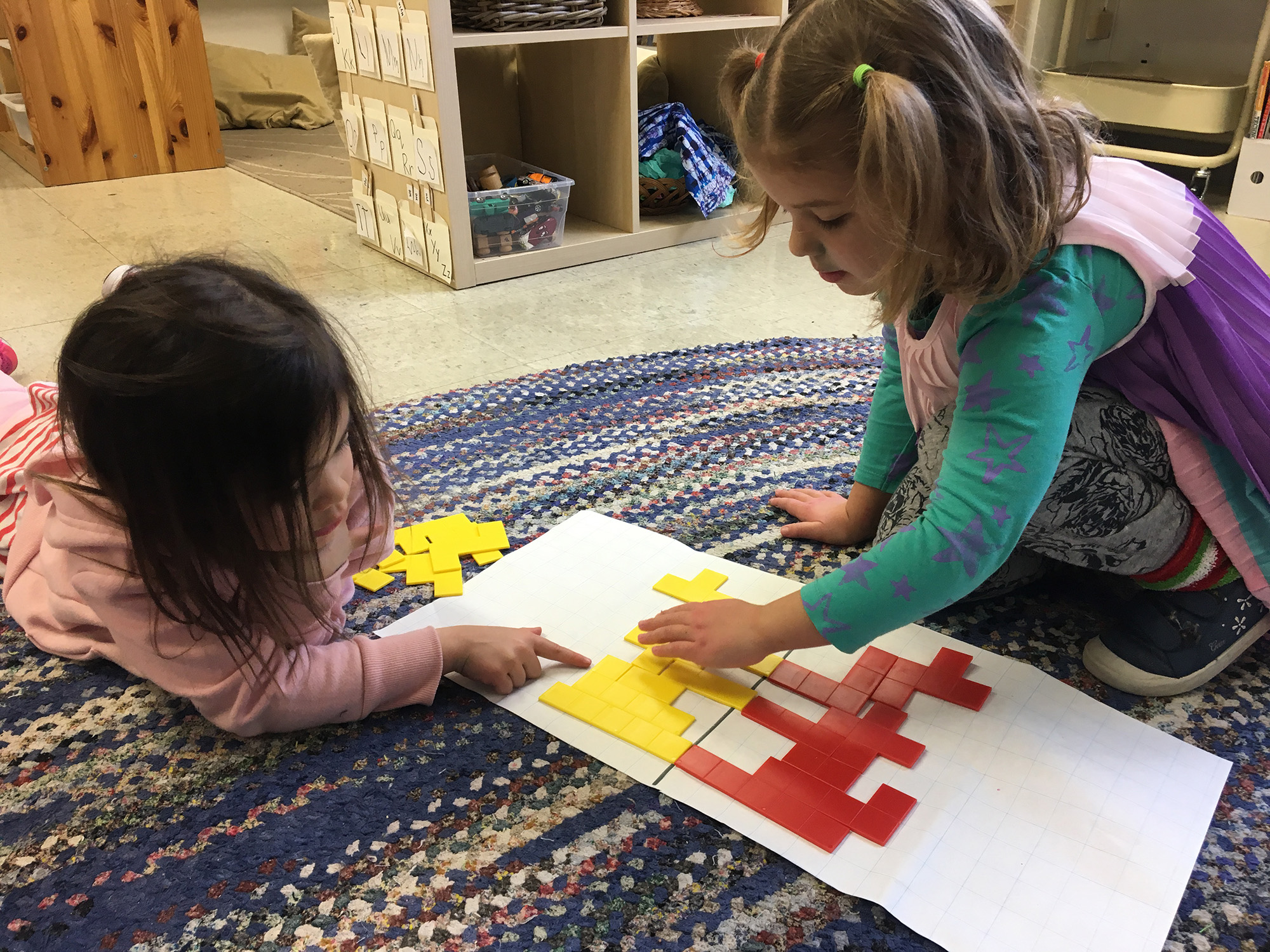 O and A play the symmetry game, but with a new variation - pentominoes! They love seeing the "keys" that they have named, and placing them in the appropriate spots so that they are symmetric and aligned on the grid paper. 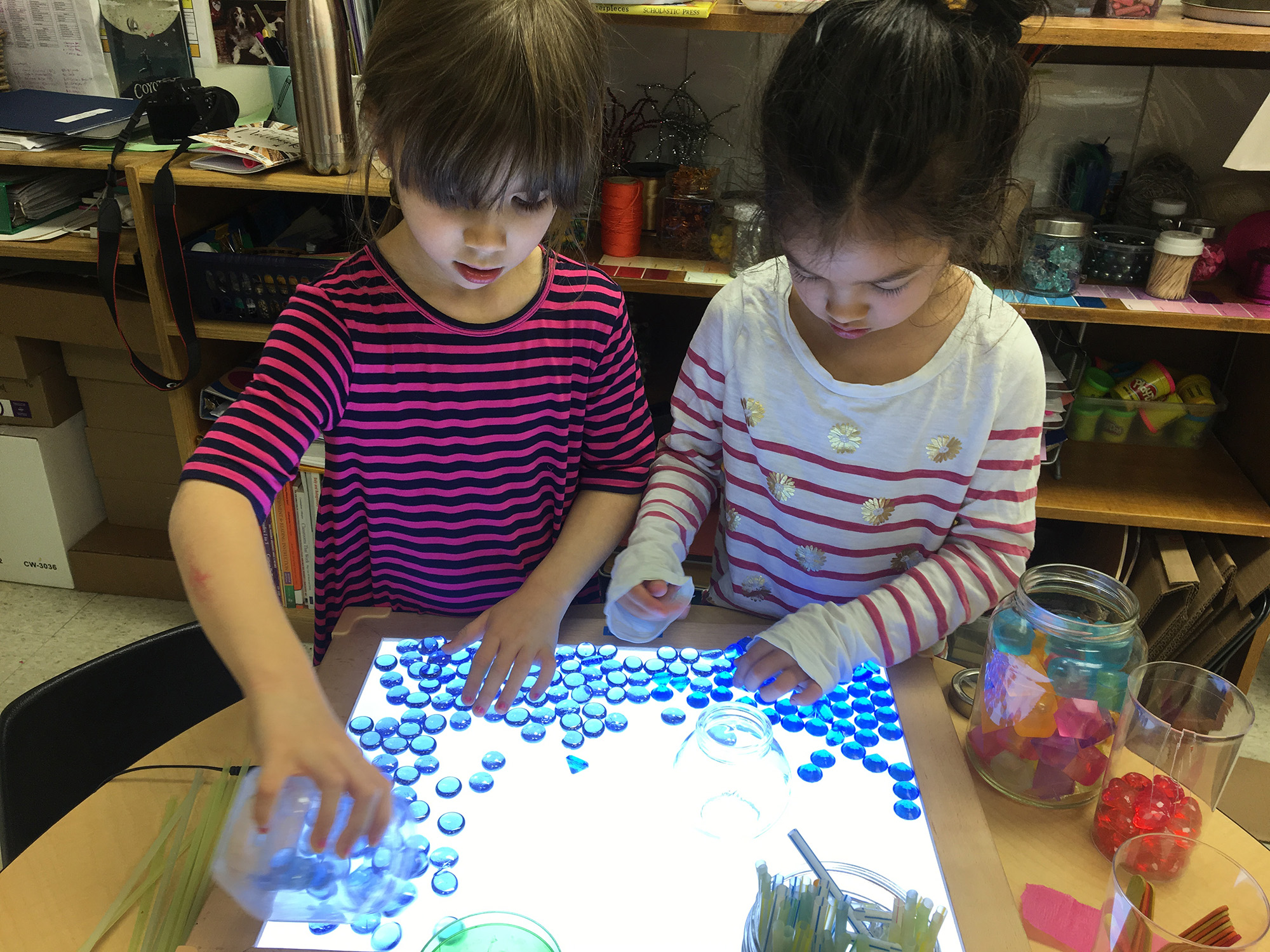 A and N work together at the Light Table this morning. A explains to us that they are telling the story of when Turtle Island was created, and that they are currently putting the water all around because of the flood. N helps by spreading out the gems so the water is everywhere on the table. 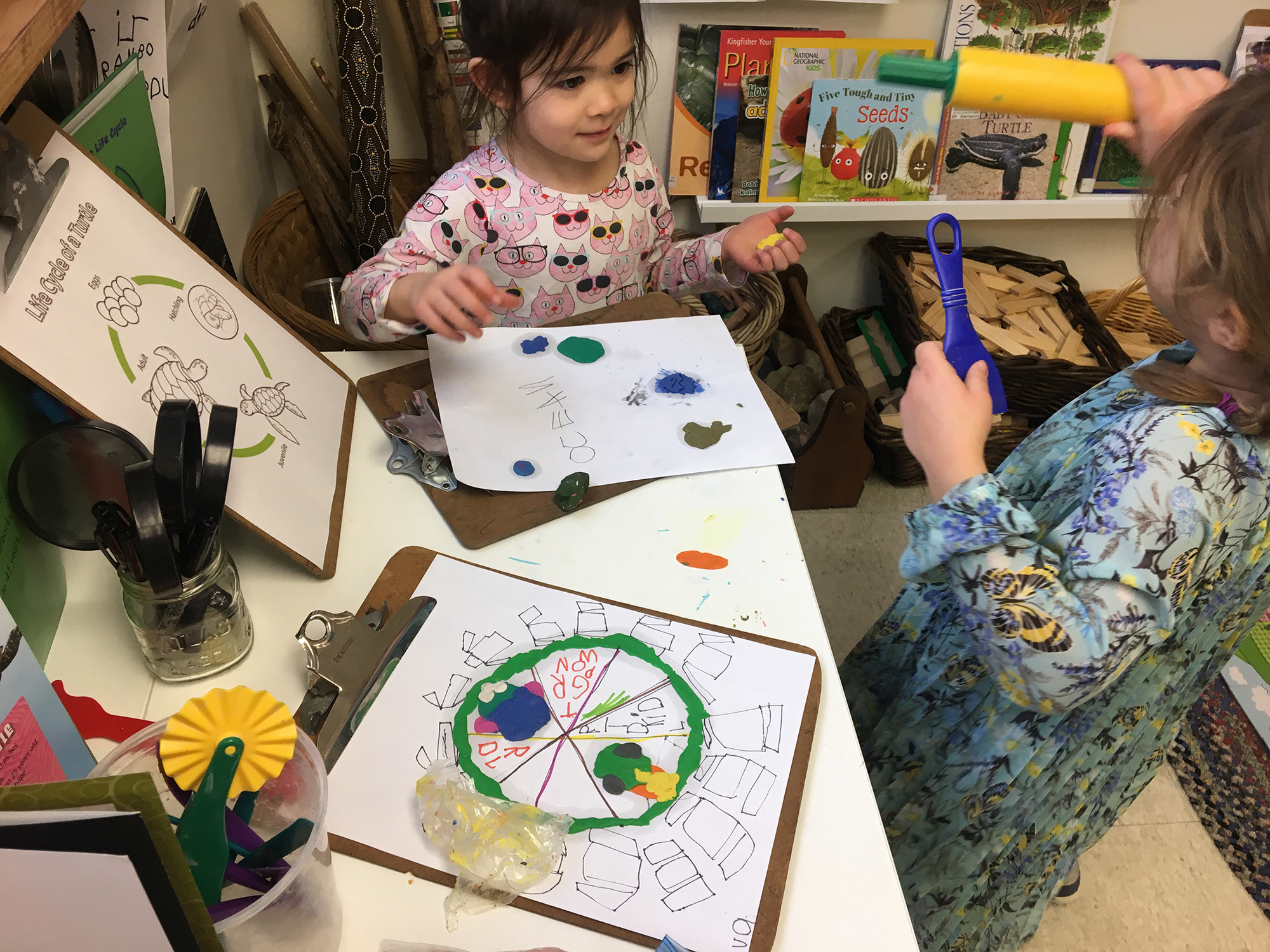 O and A discuss their different plasticine representations as they work at the Discovery centre. O explains that hers is a bunch of smaller parts, some referred to as "the blob", whereas A shares that she is working on her baby turtle stage and then she will be done. 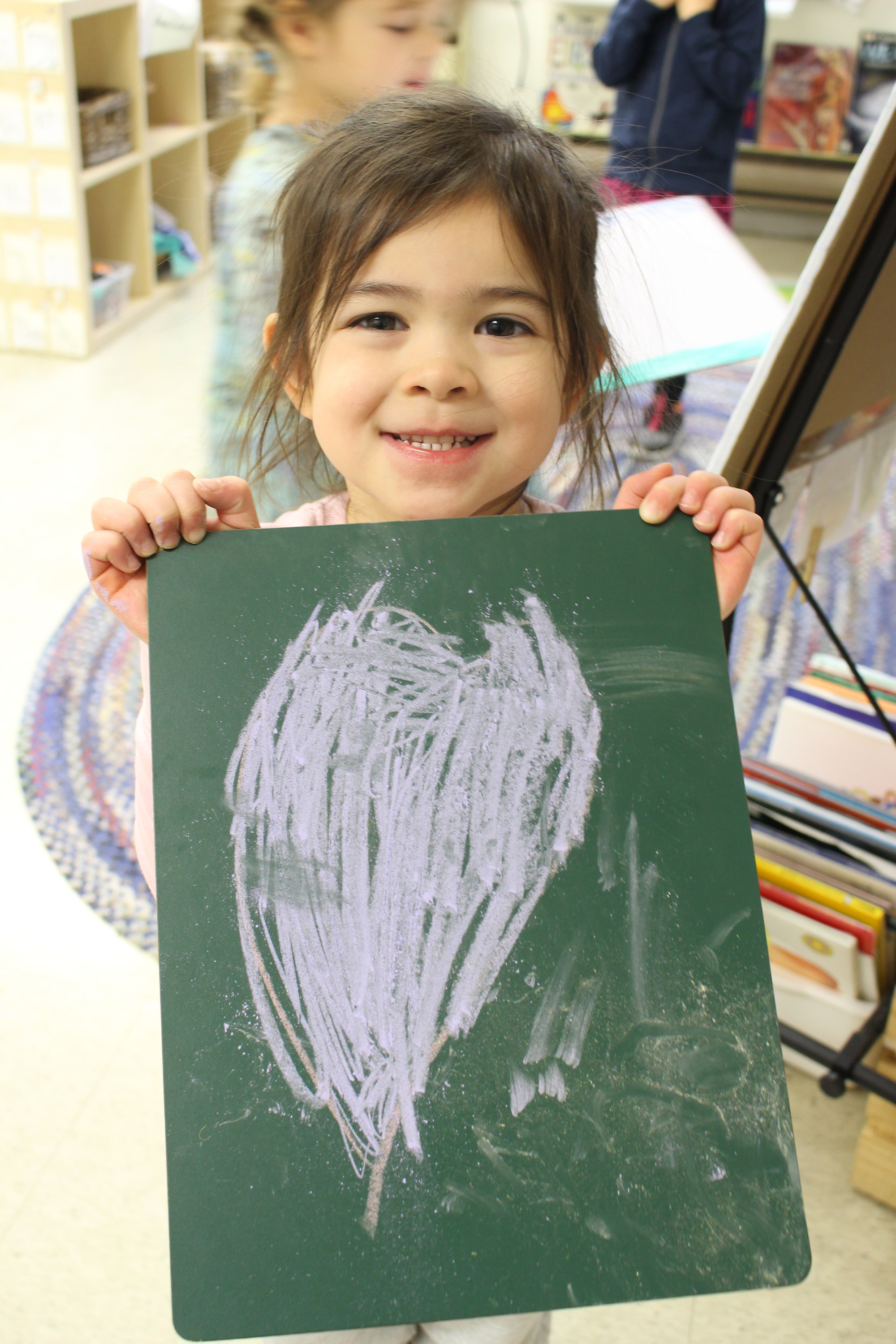 Big smiles, and lots of love, from O this morning! 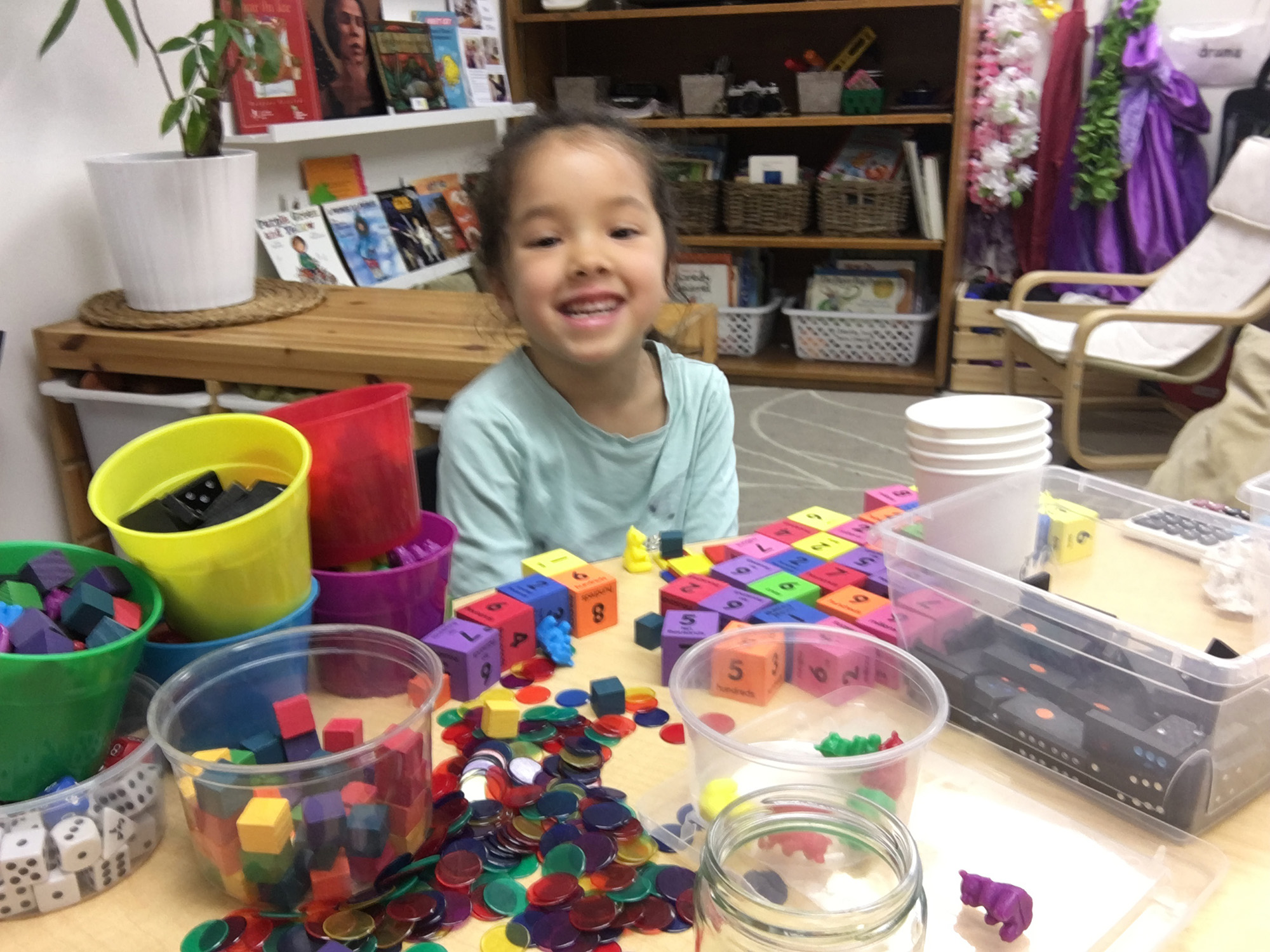 N has been incredibly busy at Math this morning making up food for the Open House guests that are touring Linden. Each time someone visits our classroom, N offers them a cup filled with "cookies" and other "candy". 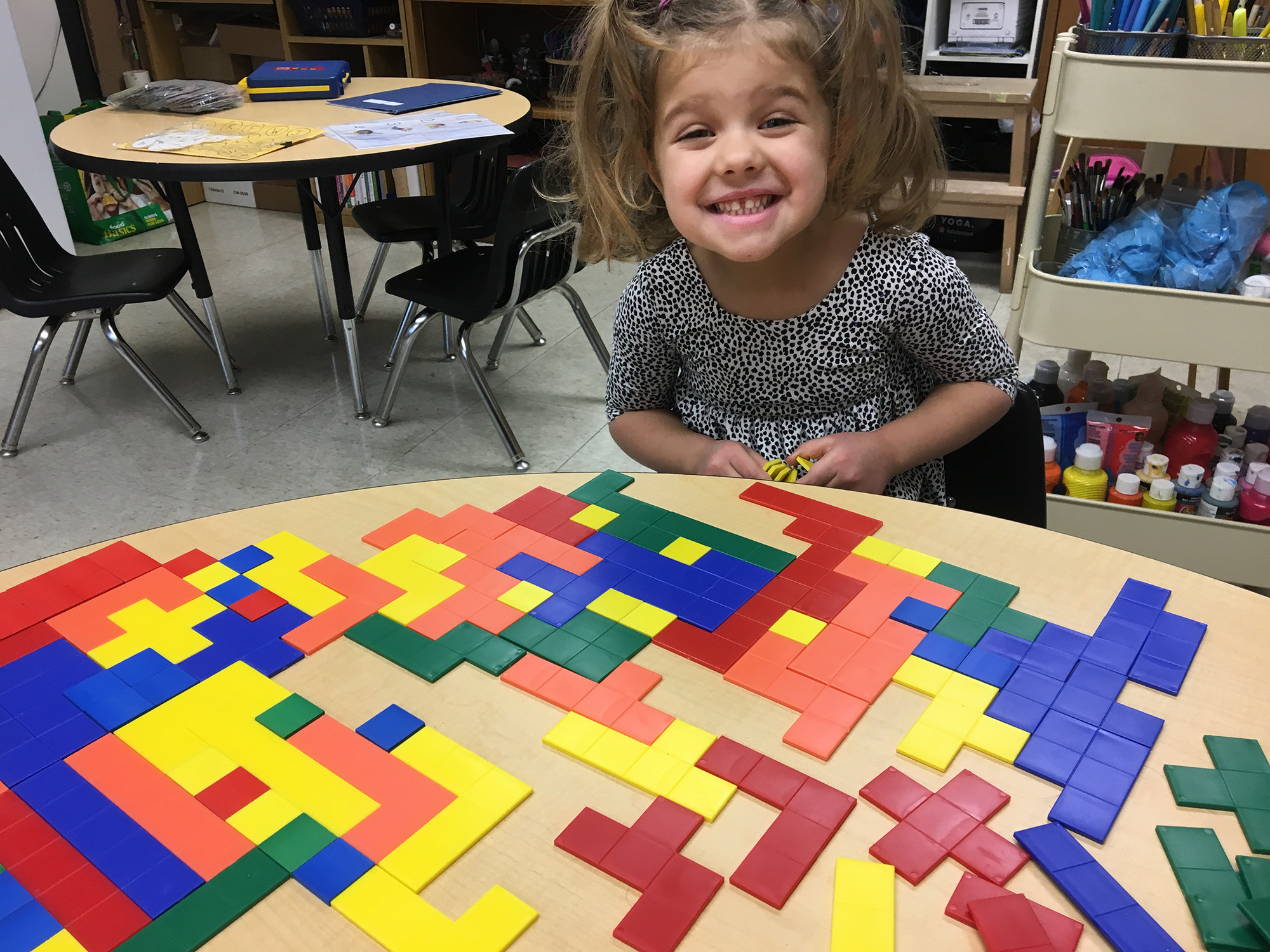 Inspired by the pentomino design she and O created earlier in the week, A focuses on designing something similar at the Math centre. First, A tries to connect as many pentominoes together as possible, and then she fills in the small gaps with the square tiles. 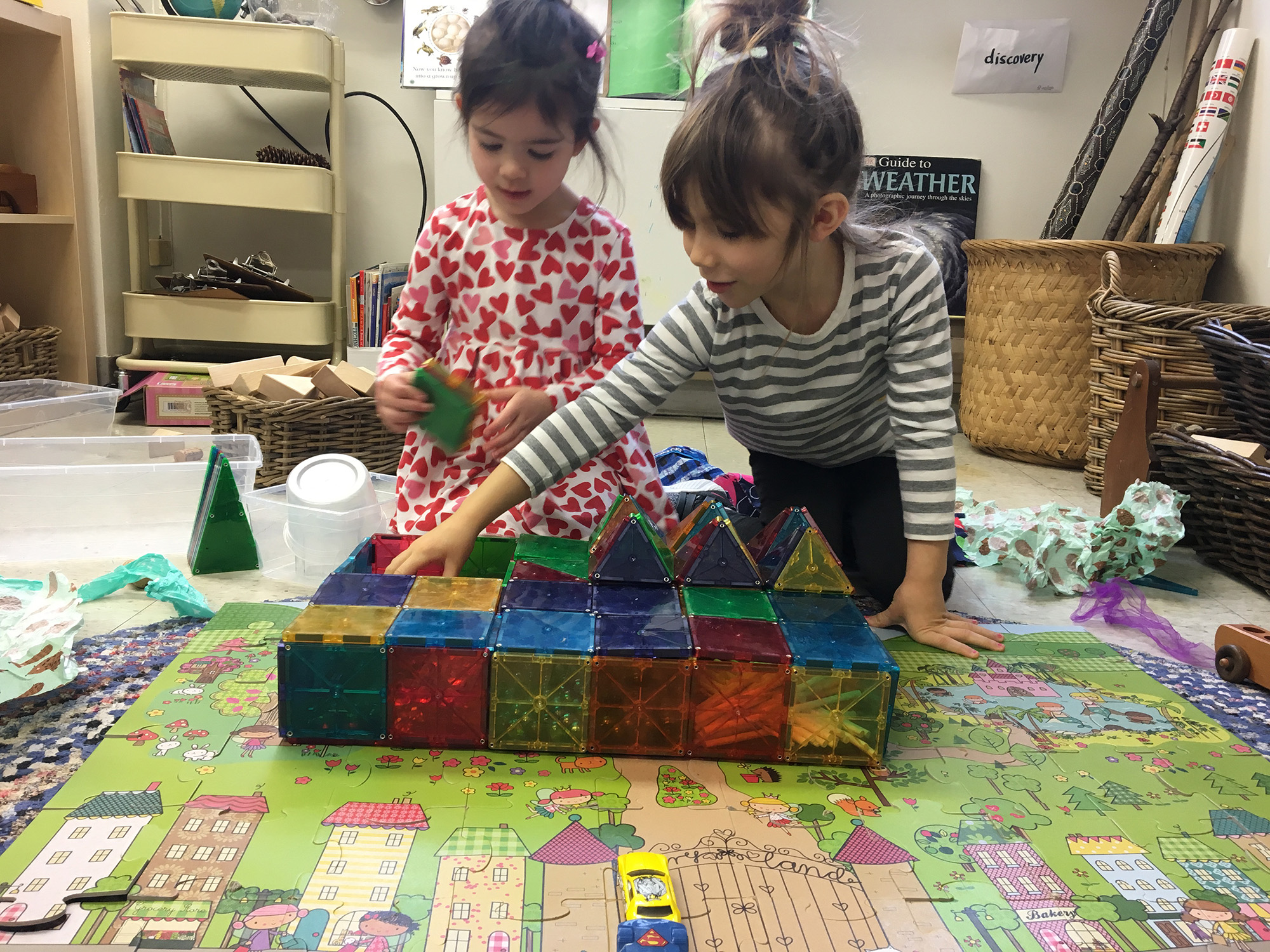 After seeing N use the puzzle as a base for her building, O and A were excited to try it out themselves. These two create something between a restaurant, oven, grocery store, and zoo. Their structure has many small compartments filled with a whole variety of materials.