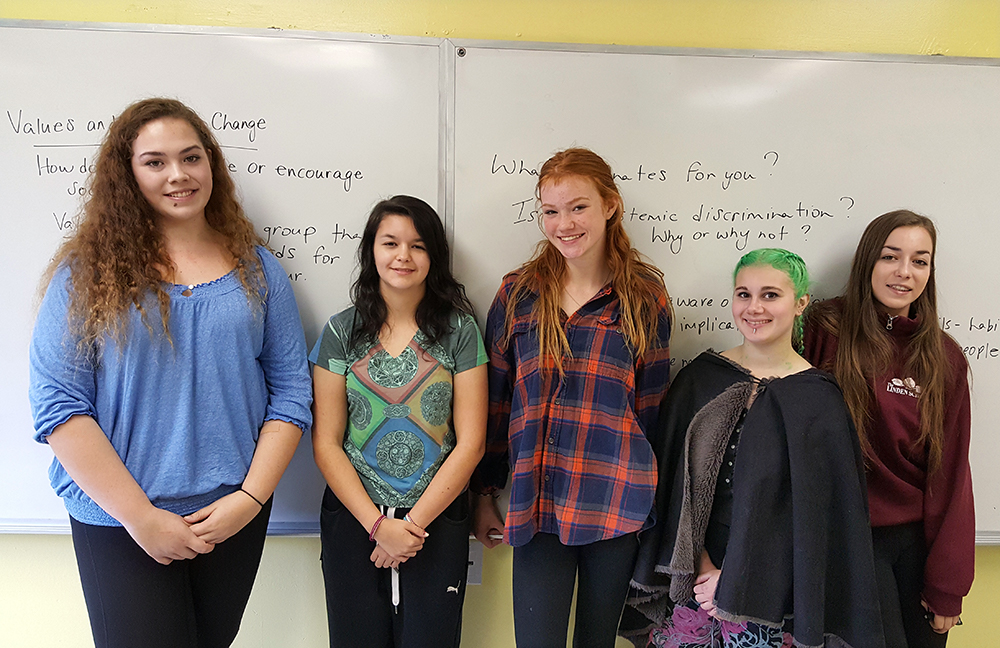 As a member of the National Coalition of Girls’ Schools (NCGS), we have been inspired by their recent blog about helping girls find their political voice and foster civic engagement. The U.S. presidential election has also been part of our ongoing conversation at Linden. Some of our senior students, including Bianca, Morgan, Rachel, Sabrije, and Sophie recently led a roundtable discussion on the portrayal of women and girls in the U.S. presidential election. What follows below are excerpts from their discussion:

Donald Trump’s major opponent is Hillary Clinton, a woman. How has her gender affected the election discourse?

Instead of talking about the candidates’ values, their platforms, and the real issues at stake, the conversation has boiled down to a battle of the sexes. The bias against women is clearly evident in this campaign. Donald Trump is free to throw a temper tantrum, and be very unprofessional, and people think it’s funny. If Hillary Clinton had behaved like him, she would have been shamed, and people would have openly asked, “How can she run the country if she cannot handle herself?” People would have asked whether her hormones would play into her decision-making once she’s in the Oval Office. When Trump behaves badly, it’s acceptable because he’s a man, and men can throw their weight around and be bossy. When women behave emotionally, their period is to blame.

Why are some women still voting for Donald Trump in light of his misogynistic comments and actions?

Perhaps some of the women have decided to overlook Trump’s misogyny because they feel he will keep the U.S. safe from terrorist attacks. Many of his followers appear to have internalized misogyny — they truly believe White men should hold power, and that women cannot aspire to attain the highest office in the country.

If Trump was a person of colour, how would the media portray him?

When a person who holds a position of power behaves badly, people accept it as a reflection of their individual personality. When Trump makes a gaffe, people dismiss it and attribute it to his persona. If someone from a minority group behaves poorly, then it’s seen as a reflection of the entire minority group. It would be a very different story if he was a man of colour; they would be upset to see their image being tarnished in the media because of his misbehaviour.

Why don’t middle-aged White men get upset with Trump?

White men are privileged. They have an entrenched position at the top of our society. Many middle-aged White men believe in what Trump says. A lot of his supporters are scared of women and people of colour getting equal rights and rising to the top.

How does Hillary Clinton’s gender play into her political leadership, and her hawkish tendencies?

By being aggressive, Hillary Clinton can prove she can make it in a so-called man’s world. Otherwise people won’t take her seriously. If Hillary Clinton wins, people will be waiting for her to make a mistake. Women face much more scrutiny. If a male politician’s corruption is exposed, it’s the norm. If a woman’s corruption comes to light, she is considered unfit to run for office.

George W. Bush started a war, and millions died. Yet, no one says White men can’t be president because we can’t trust them. However, when people say they don’t trust Hillary Clinton, they’re also inferring that we can’t trust female presidents.

What would you say to Trump if you had the chance to confront him?

He is not an open-minded person. He won’t be able to change his mindset or be reasonable. Instead we can focus our efforts on supporting all the groups he has mocked and abused, such as women, disabled people, immigrants, and visible minorities. Our support for these groups will speak louder than anything we can say to him directly.

Would you be willing to boycott the Trump brand, including Ivanka Trump’s product line?

Boycotting his brand takes away from the real threat he poses to our society if he’s elected. Boycotting may not be effective. It’s more important to inform voters of the real issues, and create real awareness amongst them.

What about all the jokes about Trump? Are they hurting or helping his campaign?

On a superficial level, people may laugh at his expense. But it’s not funny. What if people vote for him as a joke? Where would that lead the country? The jokes broaden the gap between Trump’s TV personality and him as a person. We need to take a step back and look at what we’re actually laughing at. He has rape allegations against him. These crimes need to be taken very seriously.

Trump has encouraged the rise of xenophobia, misogyny, and racism in the U.S. He has encouraged people to shrug off his degrading comments about women as locker-room banter and normalized sexist behaviour towards women. The portrayal of women in this election cycle has set a dangerous precedent. Although misogyny has existed for a very long time, when our political leaders start demeaning women in the media, it gives people free reign to promote such behaviour. Many people think like Trump, and are now coming out of the woodwork, emboldened by his example. What has been most fascinating about this election is that it’s allowed us to see what’s under the rug.

If Hillary Clinton fails, what are the implications for girls and women aspiring for political leadership?

We will feel extremely discouraged.

Has Hillary Clinton been a good role model for girls?

In many ways, yes. She has faced his attacks calmly, and stayed strong. And she’s always come back at him with a good response.