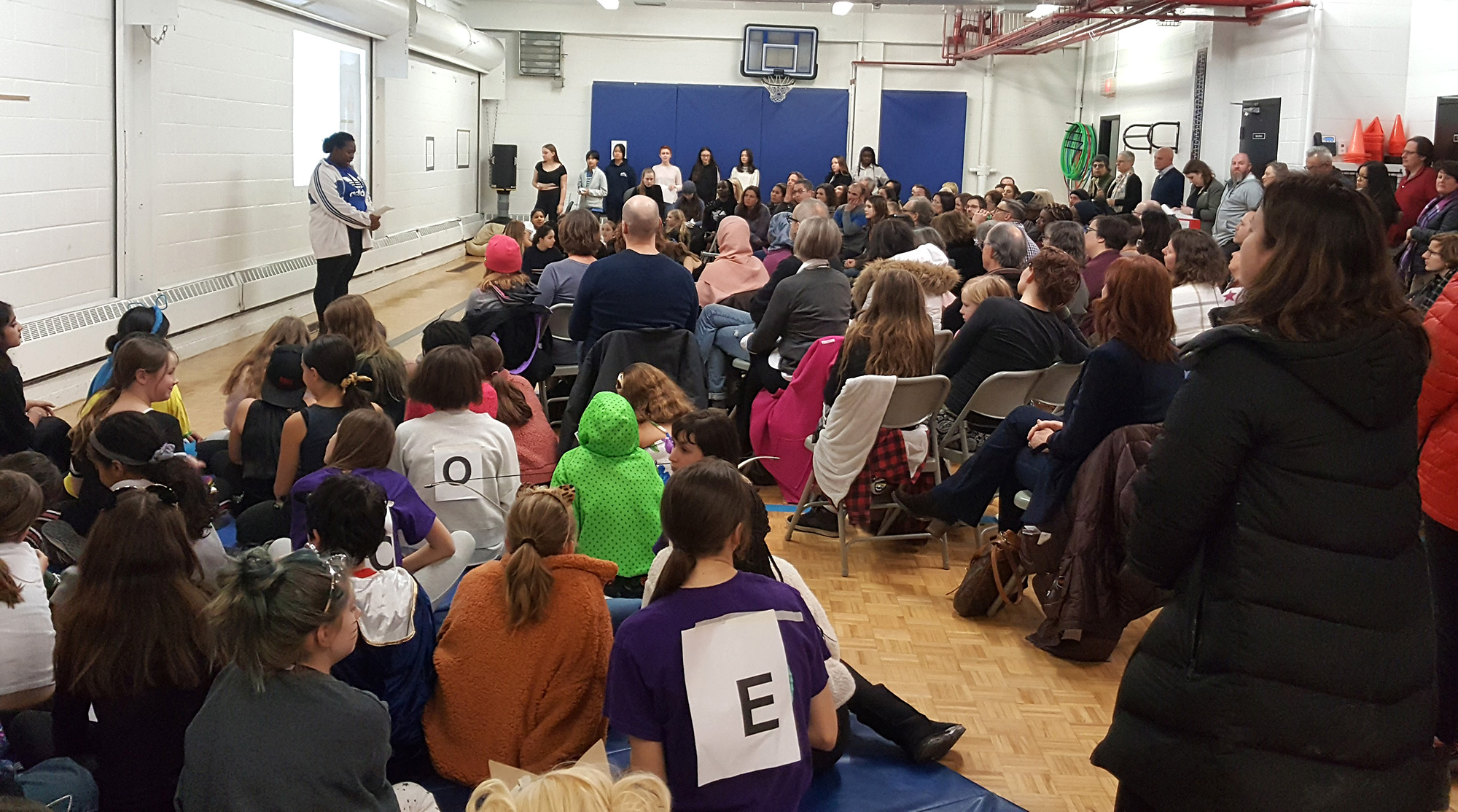 Click here to view more photos and videos from the event!

(Four-minute read, scroll down for photos and more!)

On January 30th, students in Grades 4-12 showcased their achievements at Language Night, performing in French, Spanish and Latin, the three additional languages offered at Linden. A couple of Grade 9 students performed in all three languages!

At the beginning of the evening, a parent approached me to talk about her daughter’s anxiety around taking French. I assured her that she couldn’t go wrong taking French with Coco, who — makes learning a new language both fun and comfortable, striving to accommodate her students’ needs and making the experience as inclusive as possible. This family had come to support their daughter at her first Languages Night, and had brought their two younger children. I thought of them as the presentations started, hoping they would enjoy the night. I realized I was projecting my own insecurities about understanding works in other languages. The students’ performances put my fears to rest.

The skits were engaging and funny and there were lots of laughs from the audience. Students performed both original works and adaptations of familiar material: Grades 4-6 students performed adaptations Snow White and the Seven Dwarfs and The True Story of the Three Little Pigs; the Grade 10 Spanish class chose the theme of Dora the Explorer, and one Grade 7 class did Cats.

Audience members also enjoyed original works scripted by students in collaboration with their teachers. Another Grade 7 class translated and performed The Linden Song in French – the first time The Linden Song has ever been translated! Grade 8 French students performed their original plays in three groups: one about dinosaurs taking over the world due to some scientists' poor lab safety practices; the second group created a play set in a medical office, in which eccentric characters come to see the doctor for hilarious ailments that are often ‘mistreated’; and the third group told the story of “Shangela” who travels to France for some misguided aesthetic services and realises that her true value is not her appearance.

The Grade 9s incorporated a social justice theme by writing speeches about Indigenous Warrior Women, modern artists and activists, interweaving a celebration of Indigenous resistance and achievement while improving their French skills. You can read more about these Warrior Women as they are featured in a collection of lipsticks by Cheekbone Beauty, an Indigenous-owned company operating in Ontario. Two Grade 9 students recited a poem in Spanish.

The Grade 11/12 French class introduced the evening’s events in fluent French. On-the-fly speaking and the real-world challenge of MCing an event were big steps for these students, and they pulled it off with professionalism and verve.

Linden is one of the few high schools I know of that offers Latin. Some might think that Latin is a ‘dead language’, relegated to religious texts and hymns. Arden’s Latin students were able to demonstrate that Latin was once a ‘living’ language, and revive it. Having slides with the lines translated into English in the background made their piece accessible to nearly everyone.

What stood out was how engaged the students were. Students often struggle to engage with learning and speaking a language in which they have a limited vocabulary. It is often not enjoyable, and difficult to put together a presentation with entertainment value for the audience!

I was impressed with how entertaining, creative and accessible the presentations were, even to those of us, like me, who don’t speak any of the languages fluently. I found I understood most of what I saw. Encouraging middle and high school students to collaborate in the creation of the scripts increased their sense of engagement, and is in line with the pedagogy of autonomy that is part of Linden’s values.

Throughout the presentations, I found myself wondering how the language teachers engaged the students and made it so much fun, even for those who struggle to learn a language. What theoretical frameworks informed their methodologies and what learning happened during the process in preparation for the presentations?

According to Coco, “I best align with what is called the ‘action-oriented approach’, where language is a tool to achieve our social goals. It ties in well with students' motivations (motivation being one of the major predictors of language learning success) because they are likely to have desires that they want to act on in the real world. So learning the language is not just about learning the language — which is its own goal for some, but not all! — but as a means to achieve a more attractive goal, such as travel, integrating with a community, experiencing culture, making friends, asserting personality, etc.”

We talk a lot about process versus product in education. As teachers, we don’t want the final presentation to be something to which students aren’t connected. So I asked about the in-class process and wasn’t surprised to hear that the rehearsal was as important as the presentation in terms of being an ‘authentic language-learning opportunity’.

Coco said, “Creating and rehearsing the plays is a chance to fine-tune pronunciation and comprehensible speaking. In rehearsal we also get to talk a lot about socio-cultural and socio-linguistic stuff, like ‘my character is being rude right now, how do I say this in a rude way?’ Or, “what's a nasal sound? Here are some in your lines of text. Tell me where else you can find them in the rest of your text. How do you know?”

The theoretical framework underlying how languages are taught at Linden is aligned with our inclusive and anti-oppressive values. As Melody, the Grade 4-6 French teacher explains, “The learning of one language further strengthens students’ abilities in other languages. Additionally, these types of approaches help to deconstruct the colonial practice of language teaching in schools because we recognize that all languages are valuable.” This approach, called a “plurilingual approach” is highly regarded in language education.

I left Languages Night feeling inspired by our students and teachers and inspired to continue to use and learn French and Hebrew, my second languages, more actively. We live in a global world where using multiple languages will come in handy as our students leave school and pursue work opportunities, or even live, in other places. We hope that their experiences and engagement with learning languages at Linden will encourage them to take risks and challenge themselves to speak another language outside the classroom — because as we know, learning a language comes with practice in authentic environments which teachers do their best to simulate in the classroom.

Click here to view more photos and videos from the event! 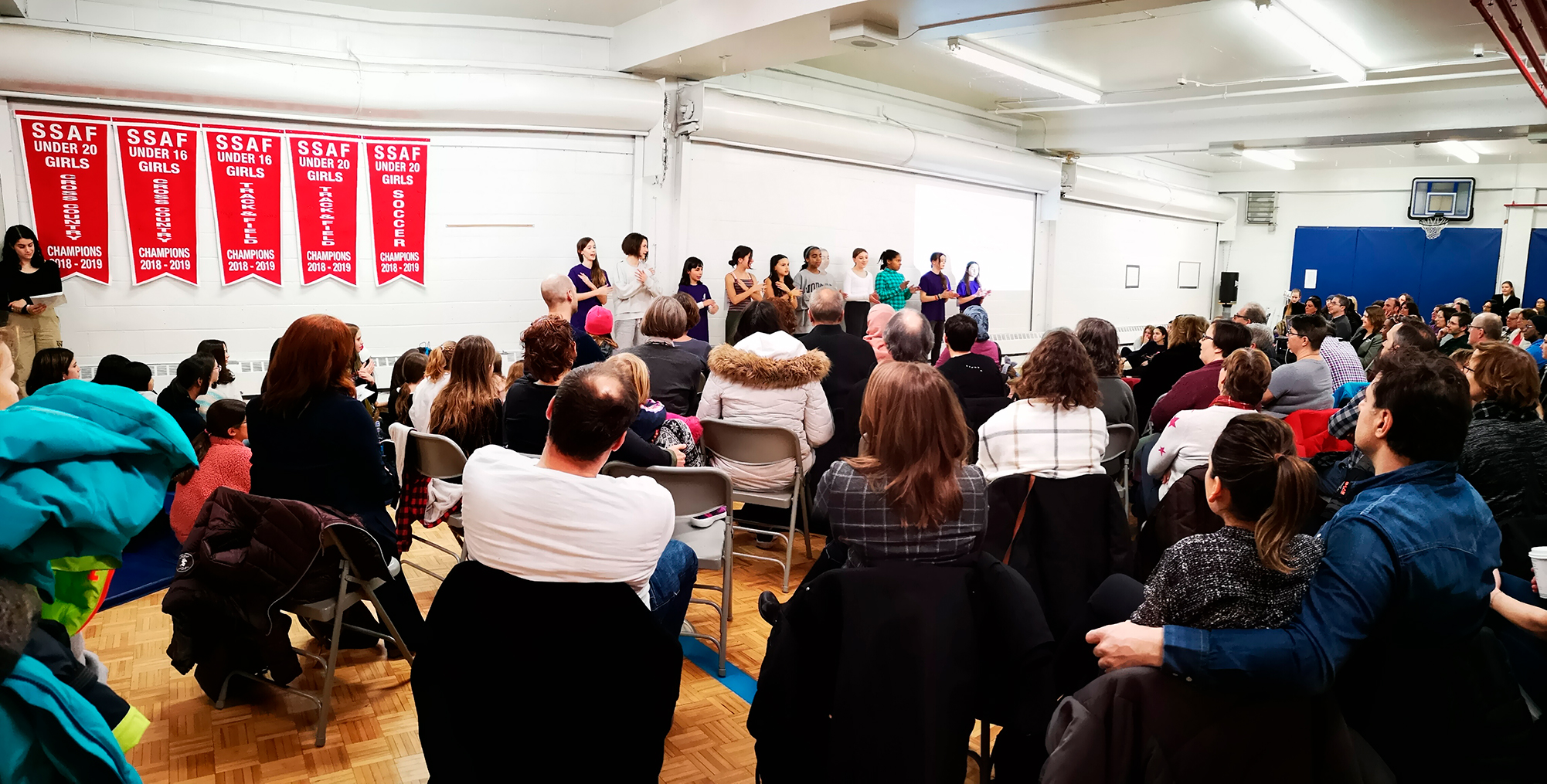 Linden School, voilà! For the very first time, The Linden School song was translated and performed in French, thanks to our Grade 7A class. They were committed to precision in punctuation and produced a pitch-perfect performance! 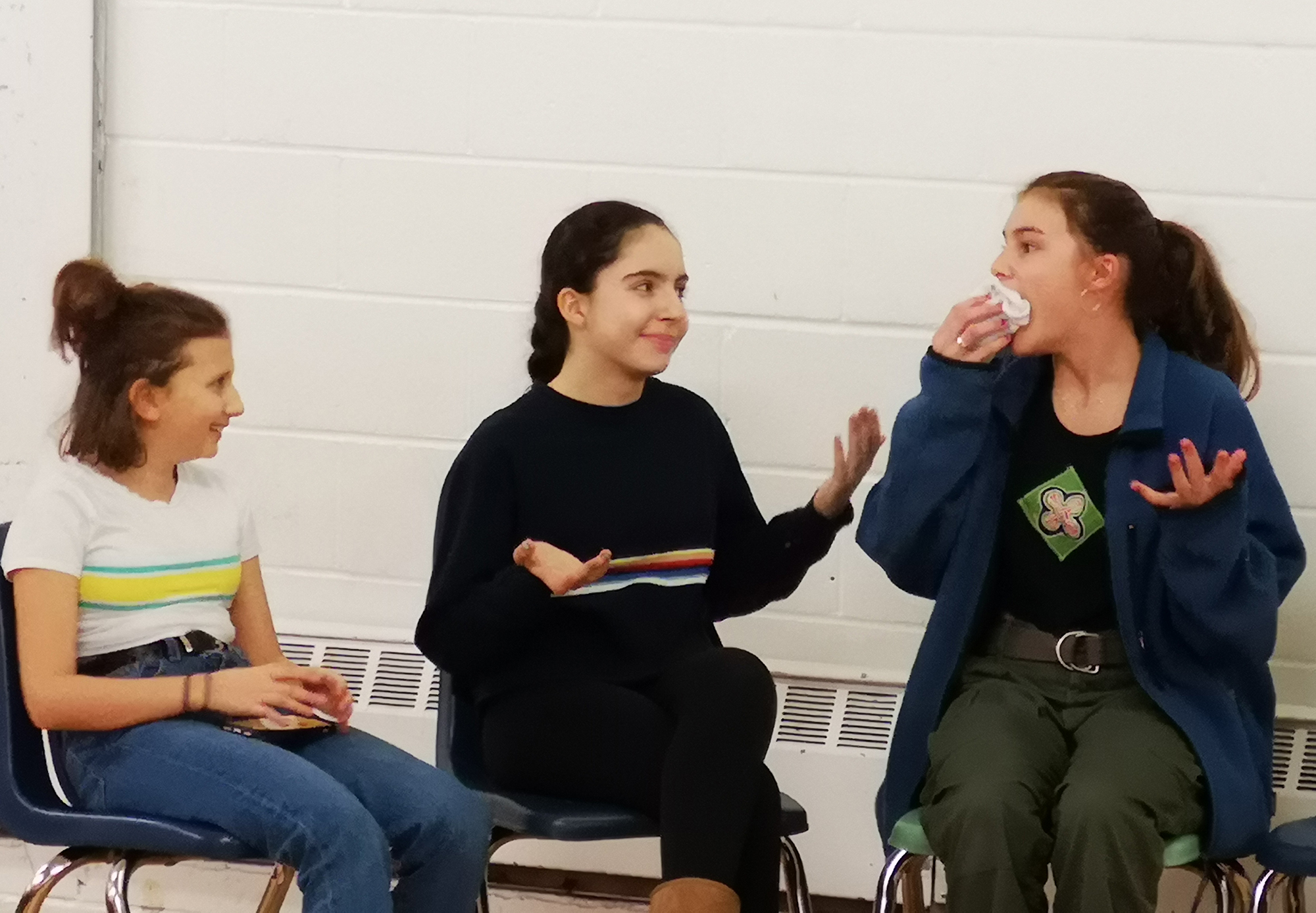 Sofia, Mielle, and Talia in Grade 8 used humour and wit in their (very loosely!) Grey’s Anatomy-inspired play featuring themselves and other classmates. 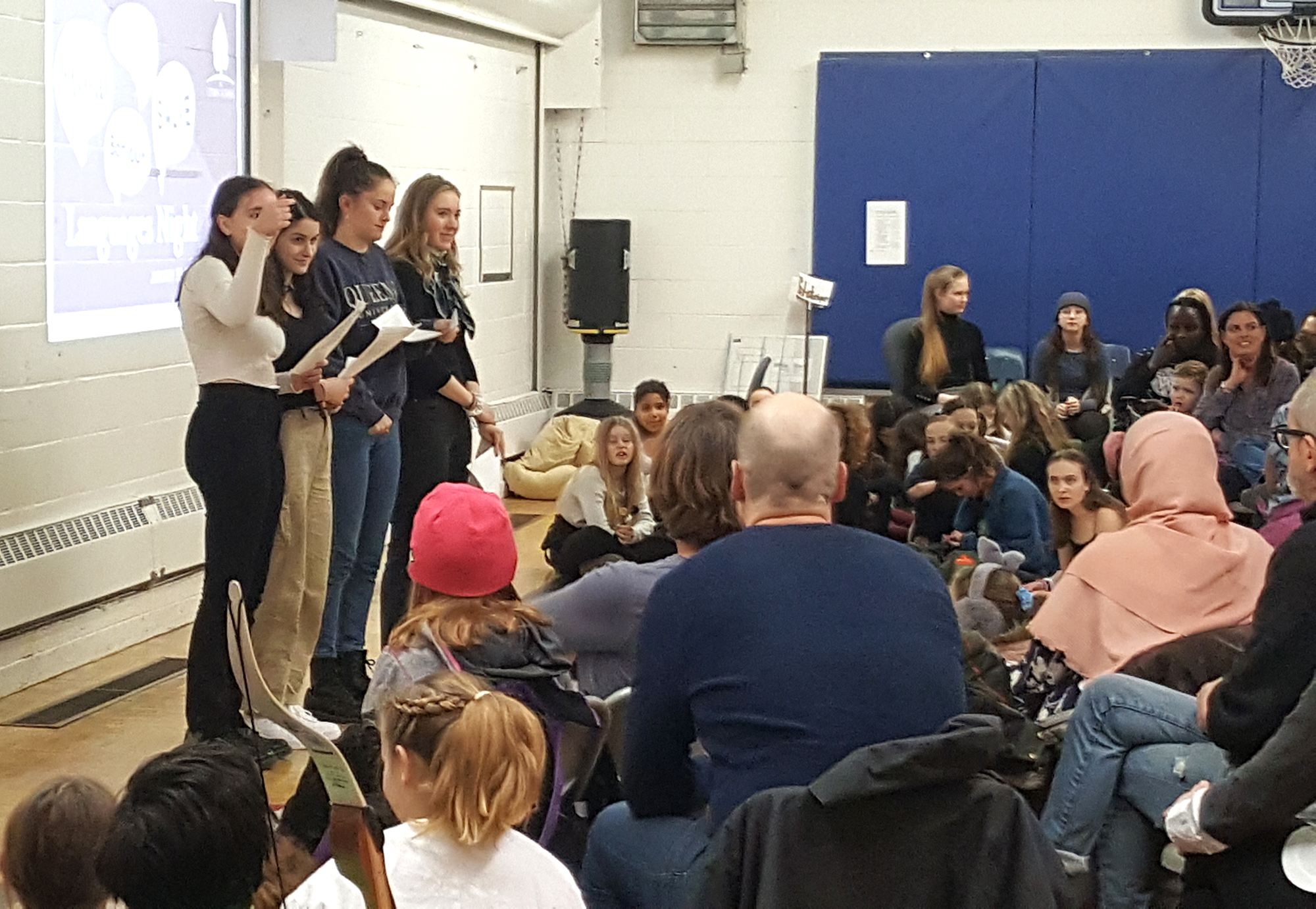 Students in Grade 11 and 12 acted as the evening’s MCs. Ellen, Bea, Sophie and Matigan rose to the challenges of keeping the event organised and on time, and using their spoken French for public speaking without memorising exactly what to say. 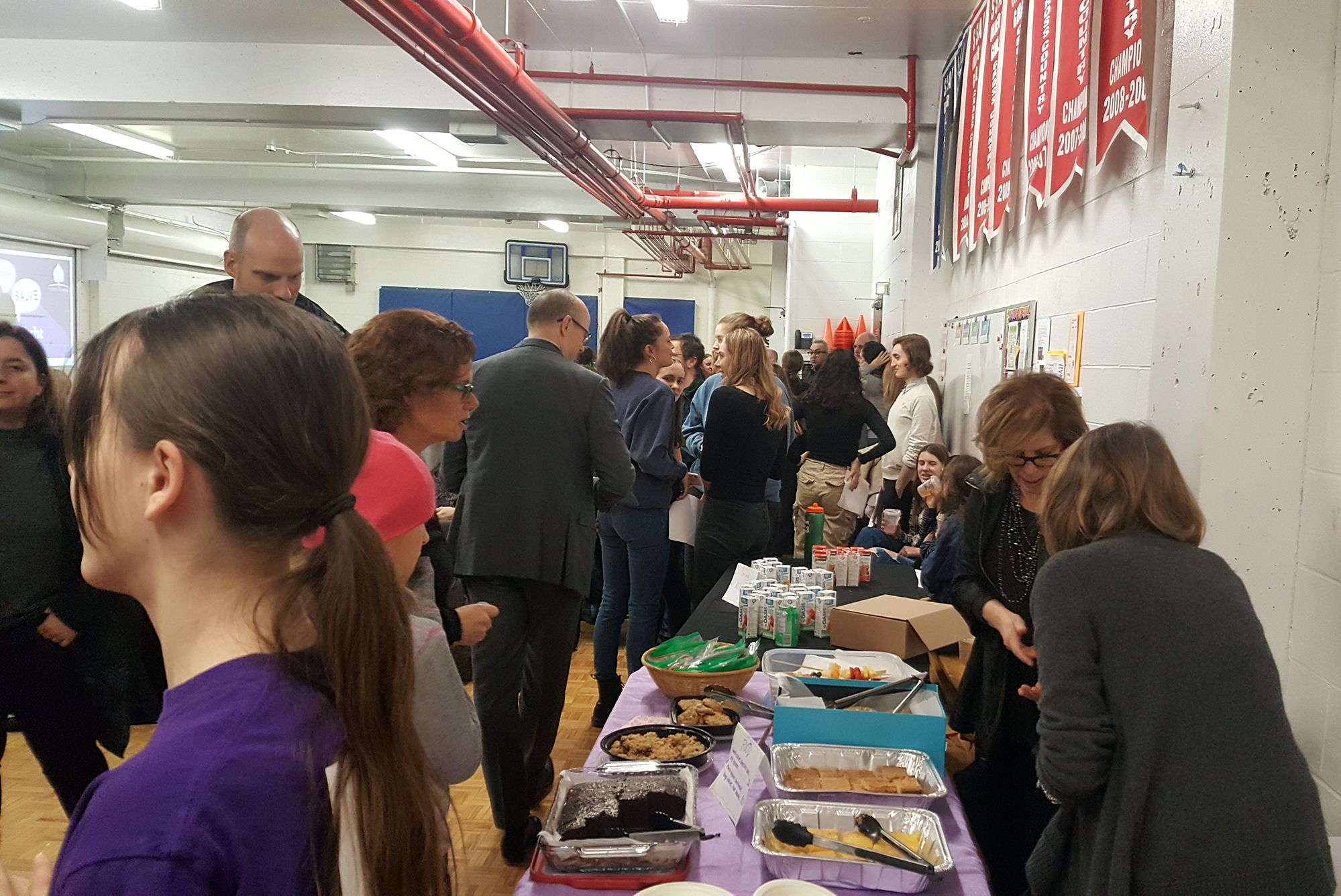 We can’t thank parents enough for donating their time and energy to the delectable snack table --and their patience at home with students’ rehearsals! 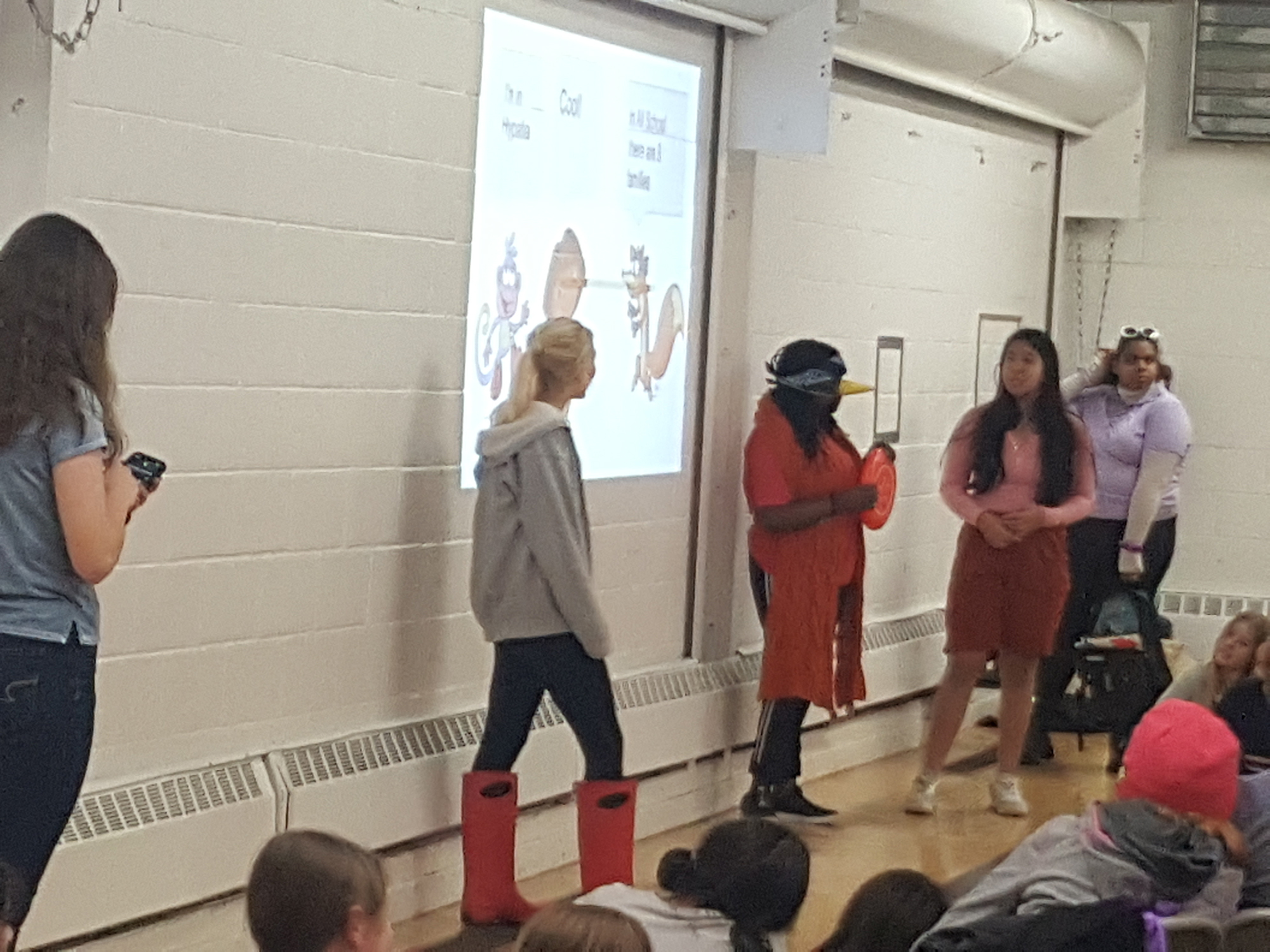 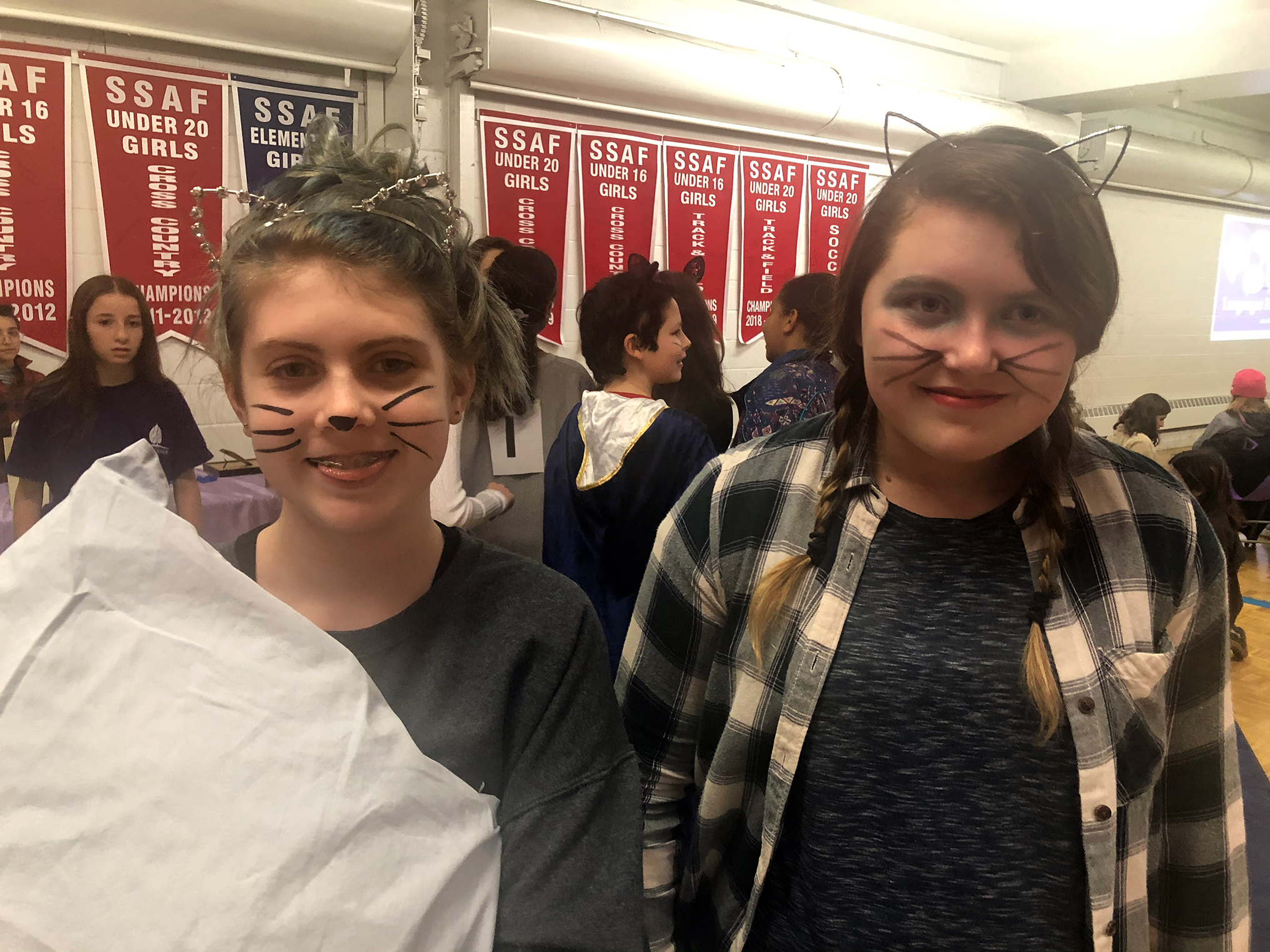 Getting ready to perform their skit based on "Cats." 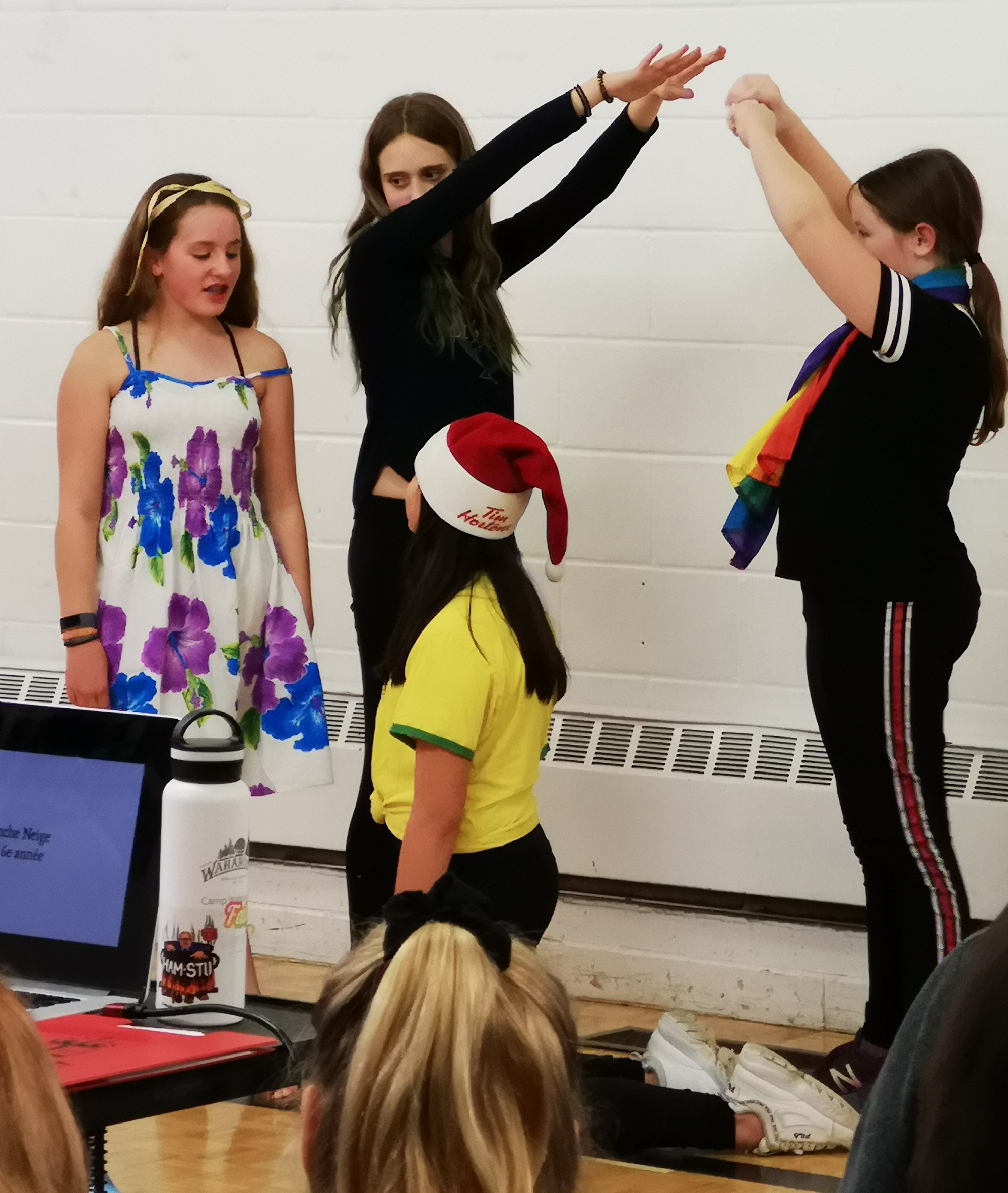 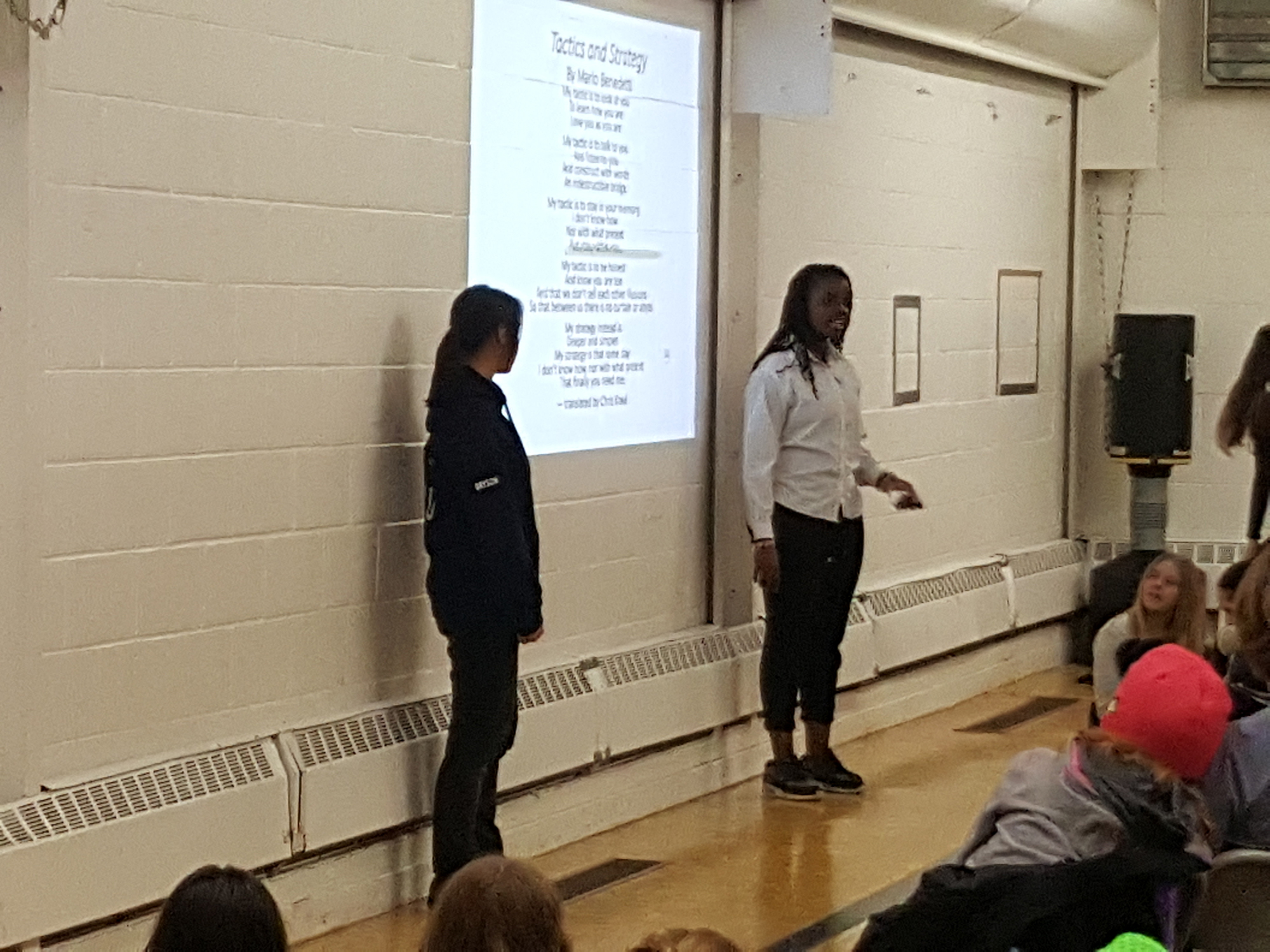 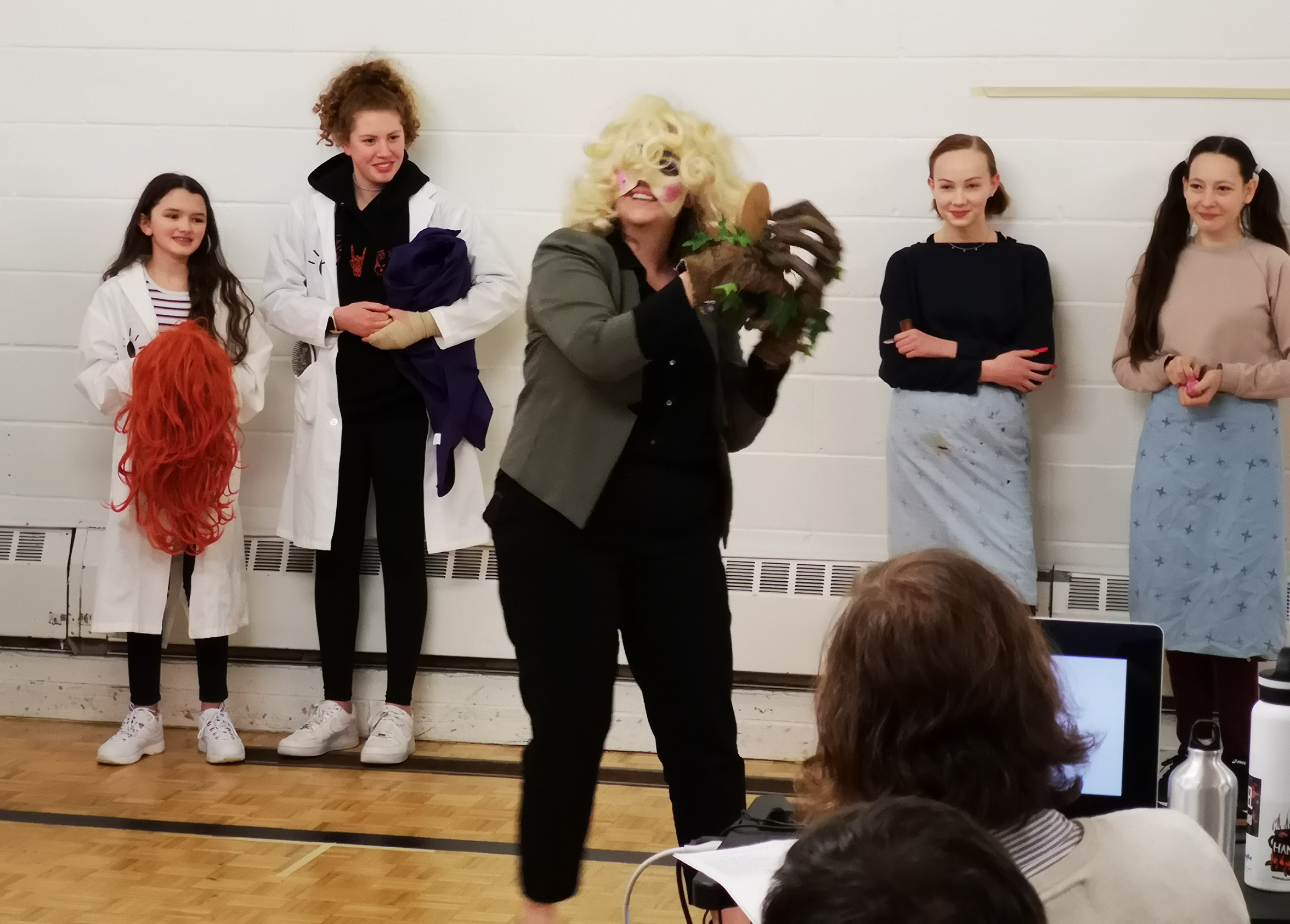 French teacher Coco was a surprise performer in the Grade 8 skit.