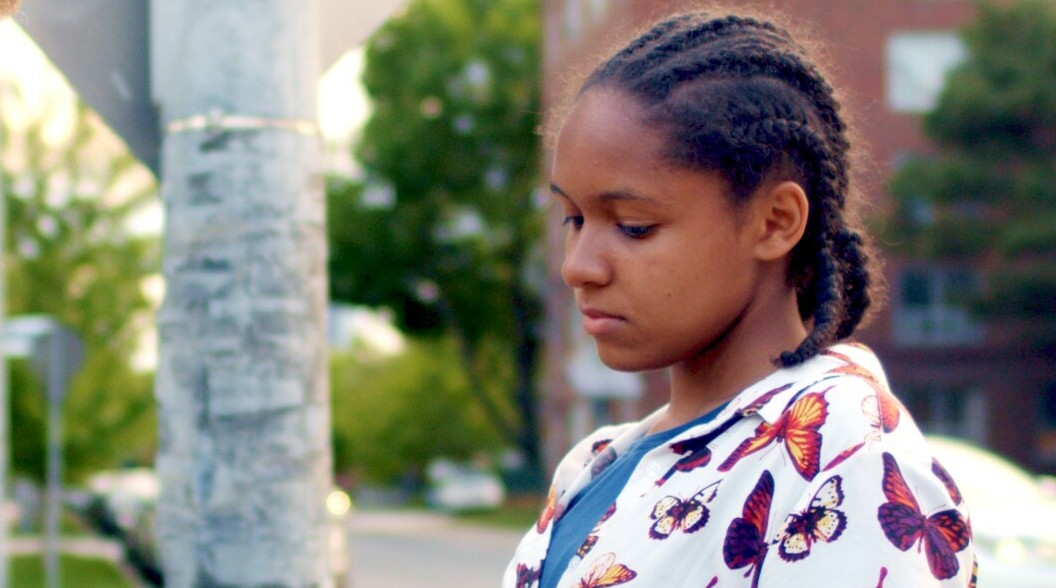 While some of us indulged in some much-needed rest and relaxation over the summer, Grade 10 student Danuvi Zoli Aggott Honsch was busy making a film! She stars in Terrestrial, directed by local filmmaker Shanele Soares, which will be screened at the Regent Park Made Visible Film Festival from September 19th-24th.

Danuvi Zoli auditioned for the part online; when she received a text to say she had the role, she was “almost crying because I wasn’t expecting to get it.”

“It’s about a shooting in Regent Park,” she said. “My character saves my friend. Then he has to move away because his mum is protective of him and won’t let him stay. The film is about friendship, and it also conveys a lot about the history of Regent Park. Some of the history is narrated by Ed the Sock.”

“Filming in person was very different from doing a play or performing online,” said Danuvi Zoli. “There were so many people there, besides the performers – the director, lighting crew, sound technicians, camera people. I was nervous at first and had to make sure I didn’t speak too quickly or quietly. The director asked a lot of us but still made the atmosphere comfortable and relaxing.”

One of Danuvi Zoli’s biggest challenges involved candy! “The script called for me to eat candy that was a bit like jellybeans,” she said. “We had to do a lot of takes, so I ended up eating a lot of them. They were very sticky, so after a while it was hard to say my lines clearly!”

Soares is among five local filmmakers who spent a year creating short films in celebration of the Regent Park community, pulling information from visual sources such as archives and news clips, and personal anecdotes from those who live there.

All five films will be screened online from September 19th-24th. Congratulations Danuvi Zoli!