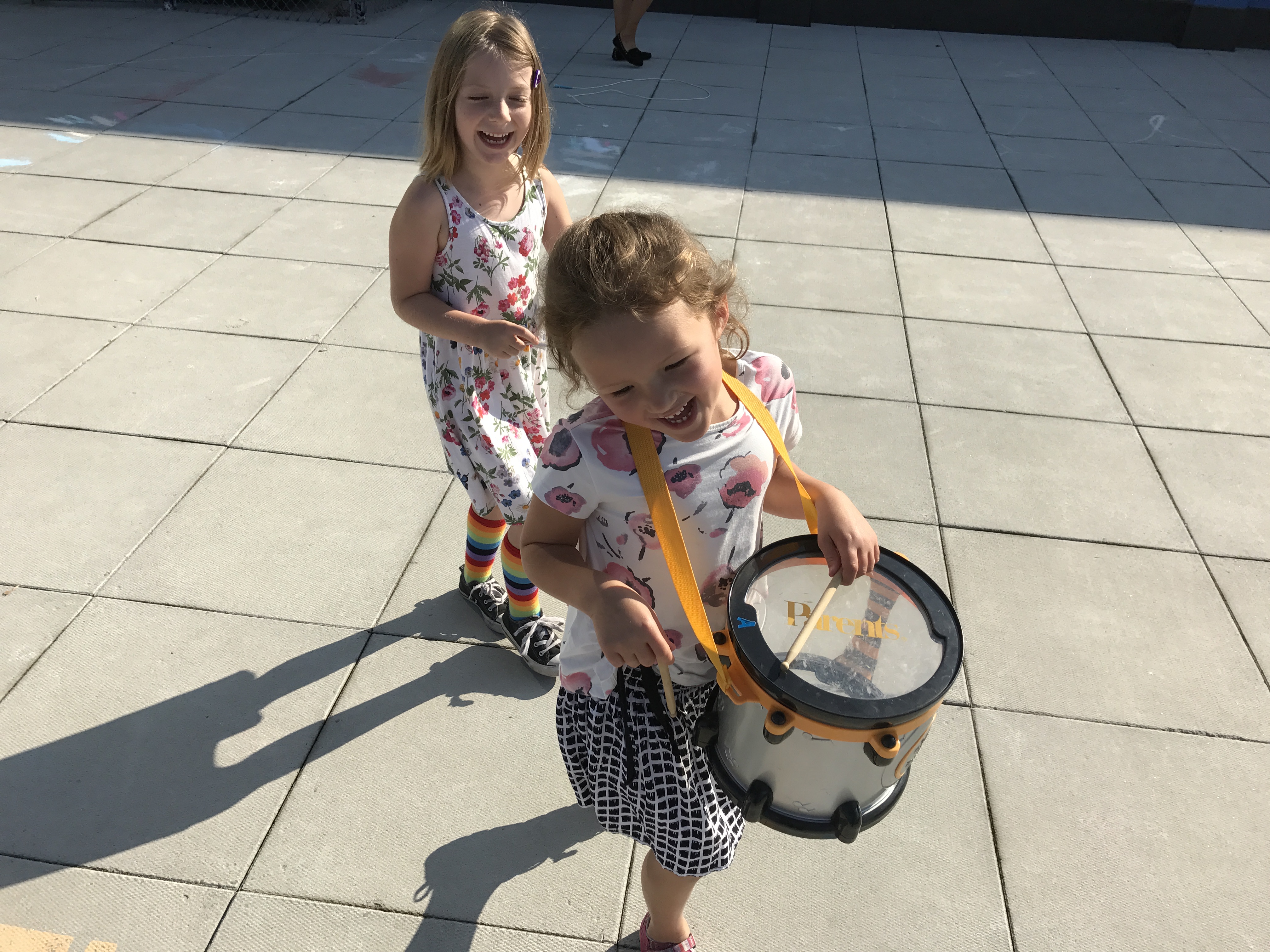 Our third week of Linden came with a sudden burst of summer. Despite ending in the first day of fall, temperatures this week were in the high 20s and low 30s. On Monday, the Grade 1-2s practiced adding with dice and correctly orienting their numbers when writing. Then later in the week, they brainstormed other addition strategies including counting on with fingers, using a number line, drawing pictures, using mental math, and using manipulatives such as counters. In the CERES lab, the students were learning about how different materials fall and then using their knowledge to construct parachute. We also read a number of picture books throughout the week which began to explore the history of residential schooling in Canada, including Shi-shi-etko and Shin-chi's Canoe by Nicola I. Campbell and Stolen Words by Melanie Florence. On Thursday, students from Grade 1-2 went to visit Geoff Daybutch from the Mississauga First Nation and Darryl McCormick from Wikwemikong Unceded Indian Reserve, two men who have been keeping a sacred fire in David Balfour Park for the last 37 days. They, along with a group of Indigenous women outside the INAC office on St. Clair, are trying to draw attention to the ongoing youth suicide crisis in Indigenous communities across Canada and to call for better actions toward reconciliation from all levels of government. Grade 1-2 students have started learning about the assimilation efforts of residential schools in Canada and the lasting effects that it and many other efforts of colonization have had on the Indigenous people of Turtle Island. The girls asked very thoughtful questions and listened respectfully to teachings about the four medicines. They also returned the next day with handmade thank you cards for Geoff and Darryl on their way to a ravine walk. A special thank you to J Briginshaw Photography for the ravine photos this week! 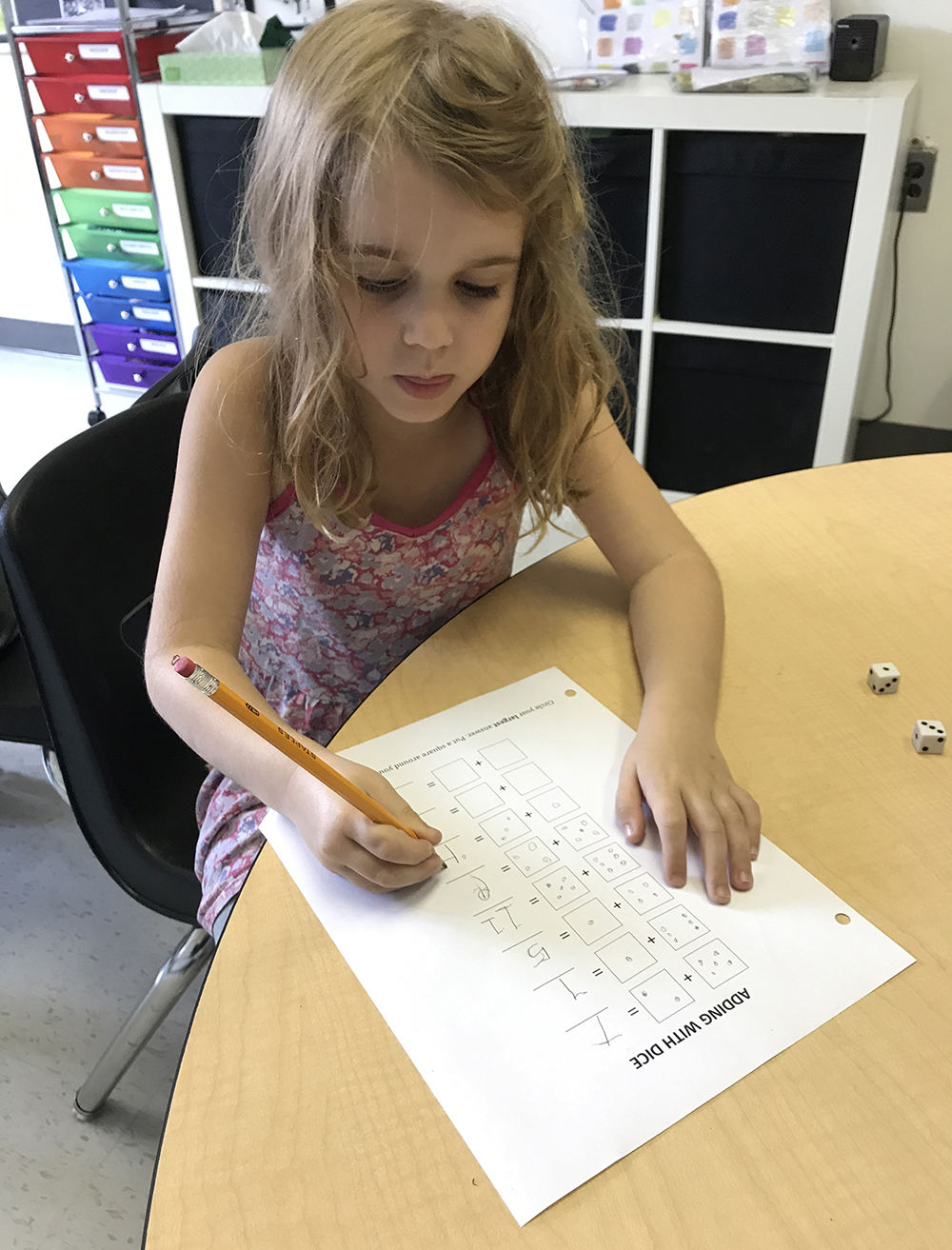 M has her focused face on as she rolls a pair of dice and calculates sums. 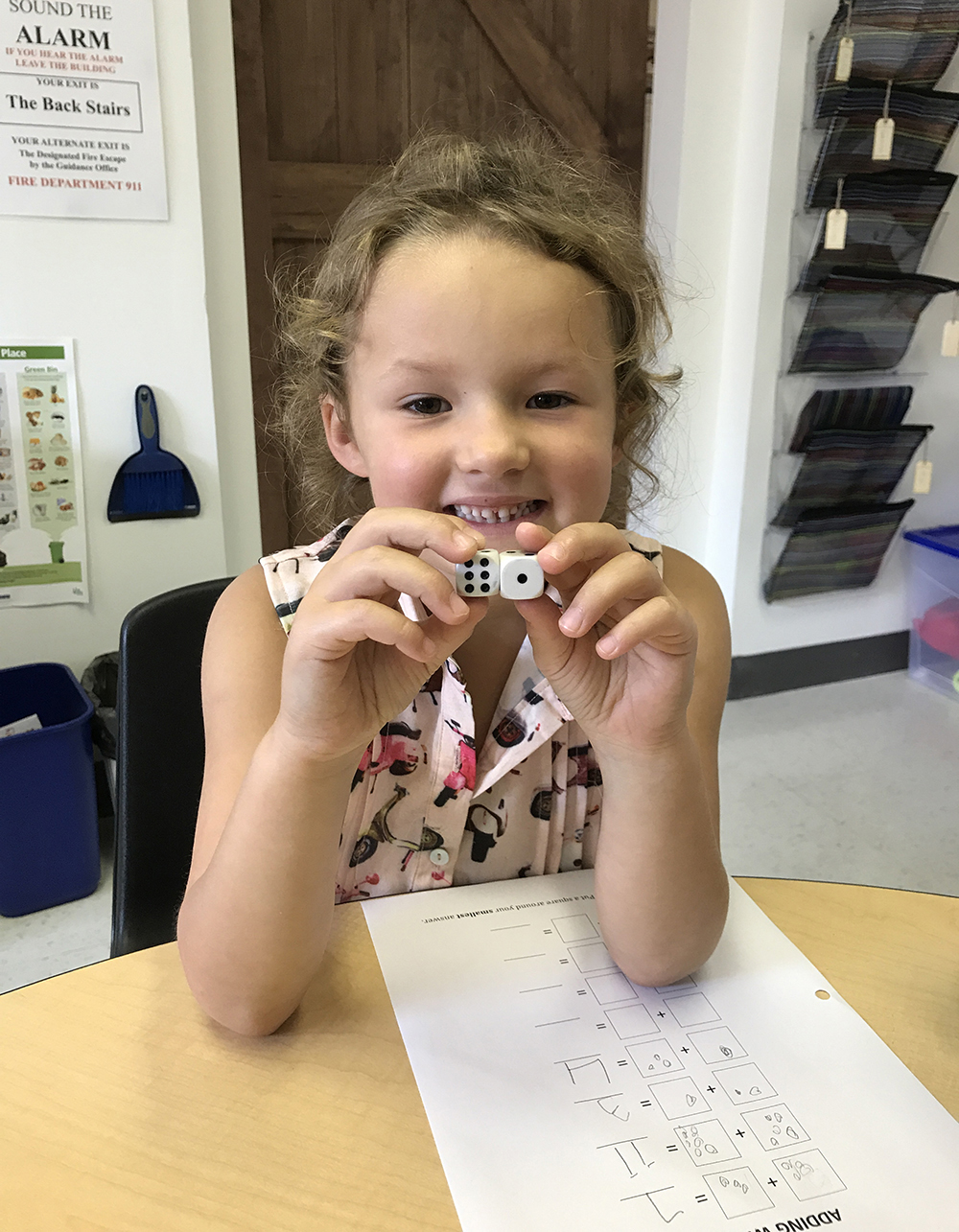 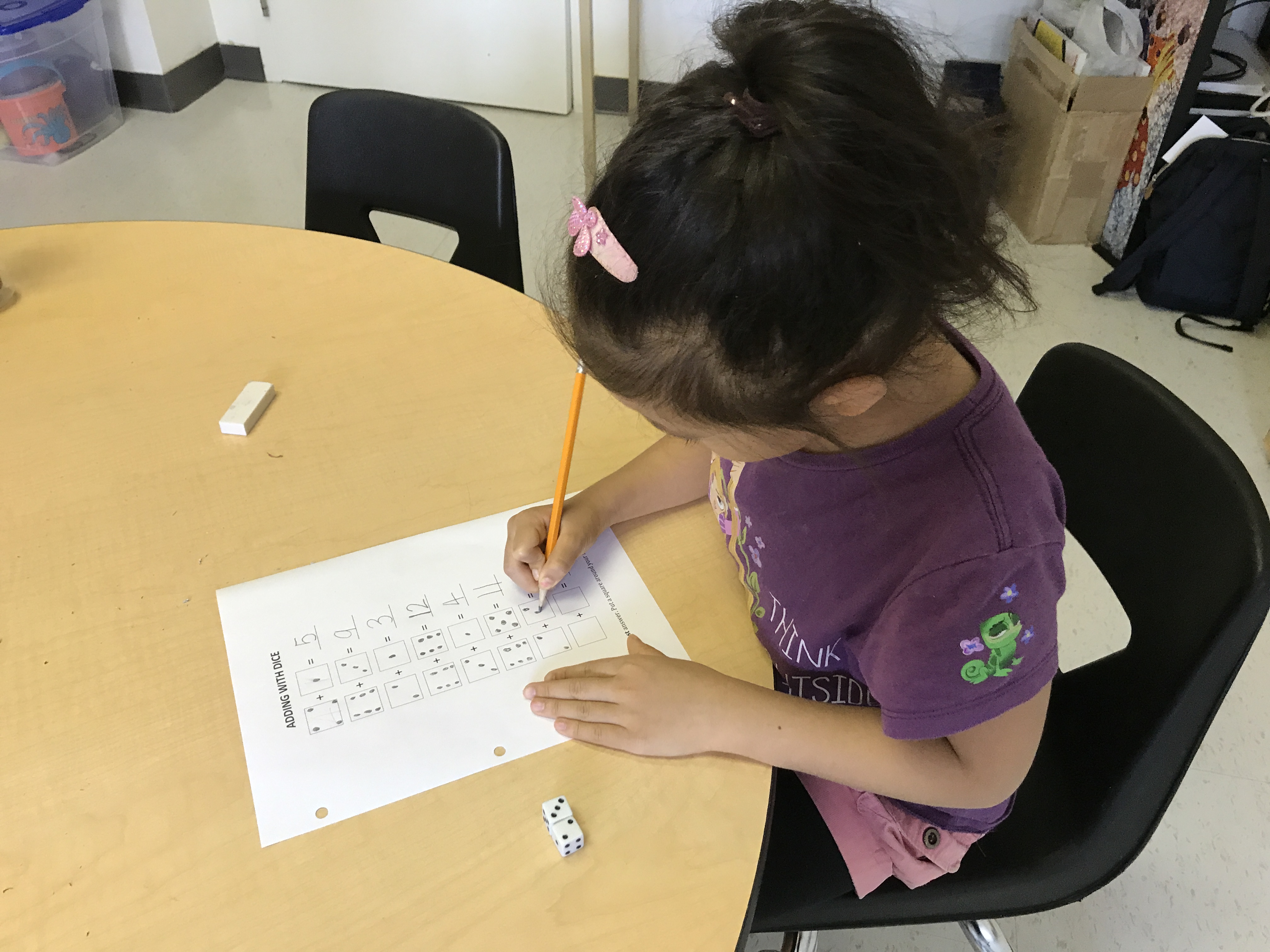 M was excited to have a challenge question at the end: circle the largest sum and put a square around the smallest sum. 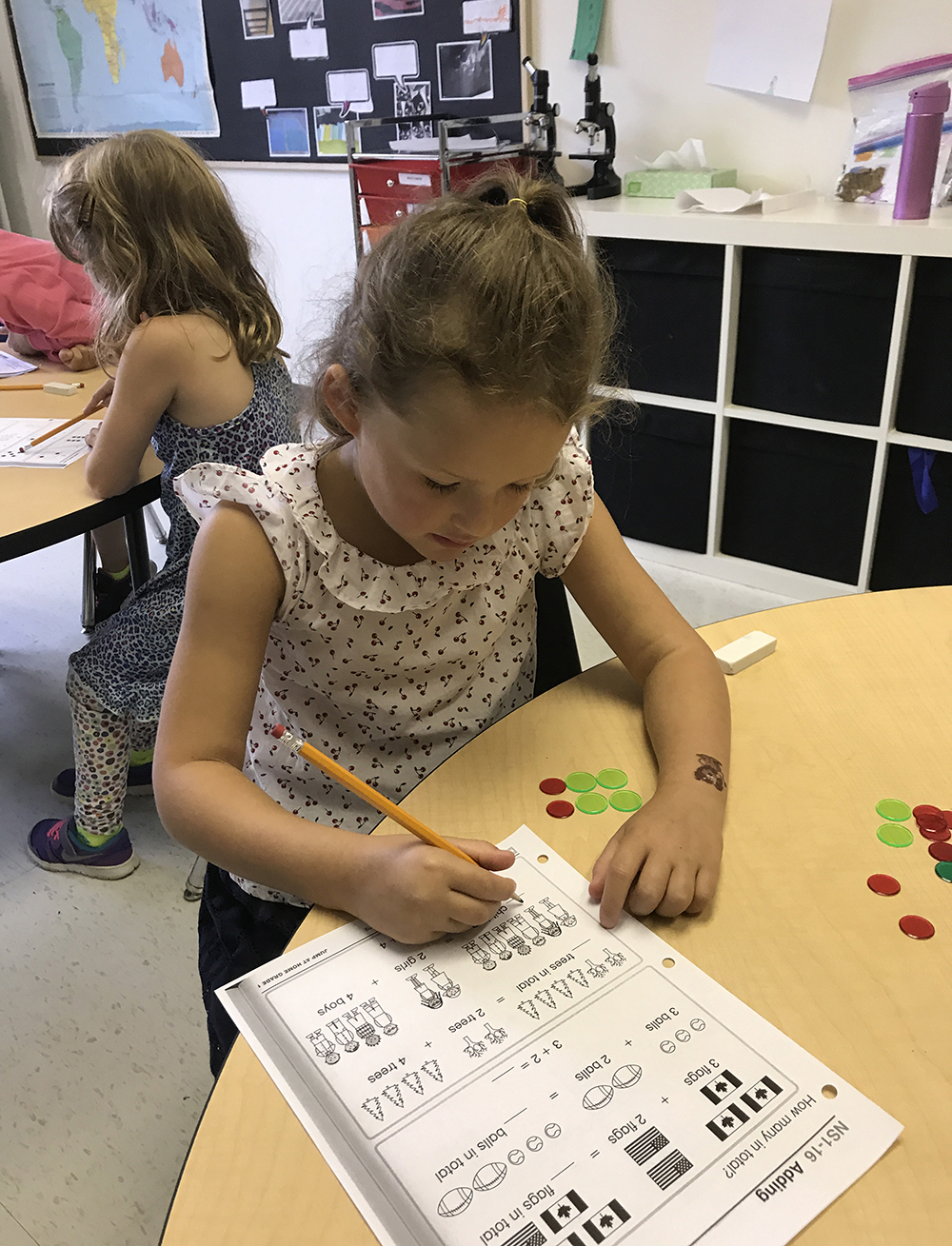 K has learned a number of addition strategies and uses counters to find her sums. 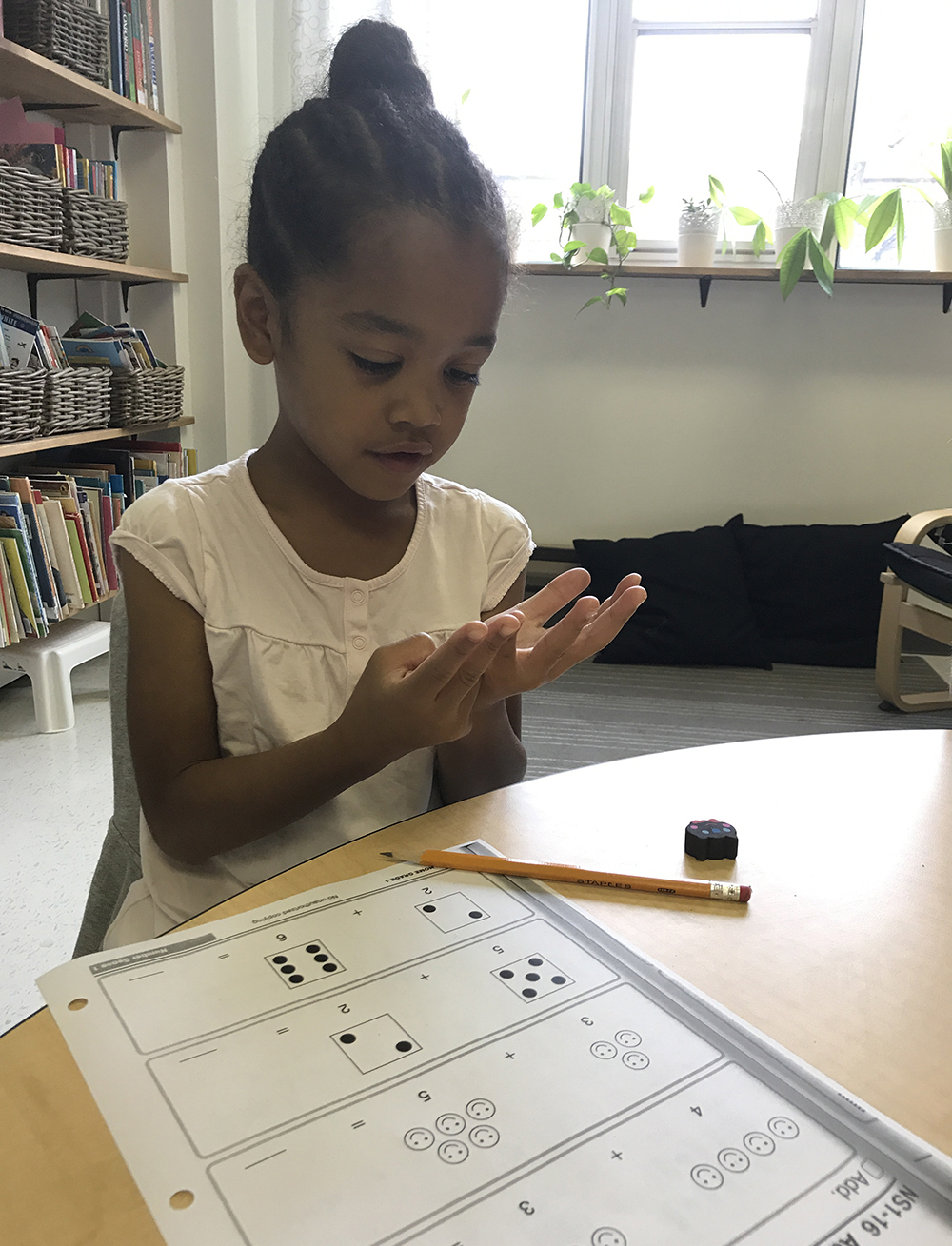 Z opts for the strategy of counting on using her fingers. 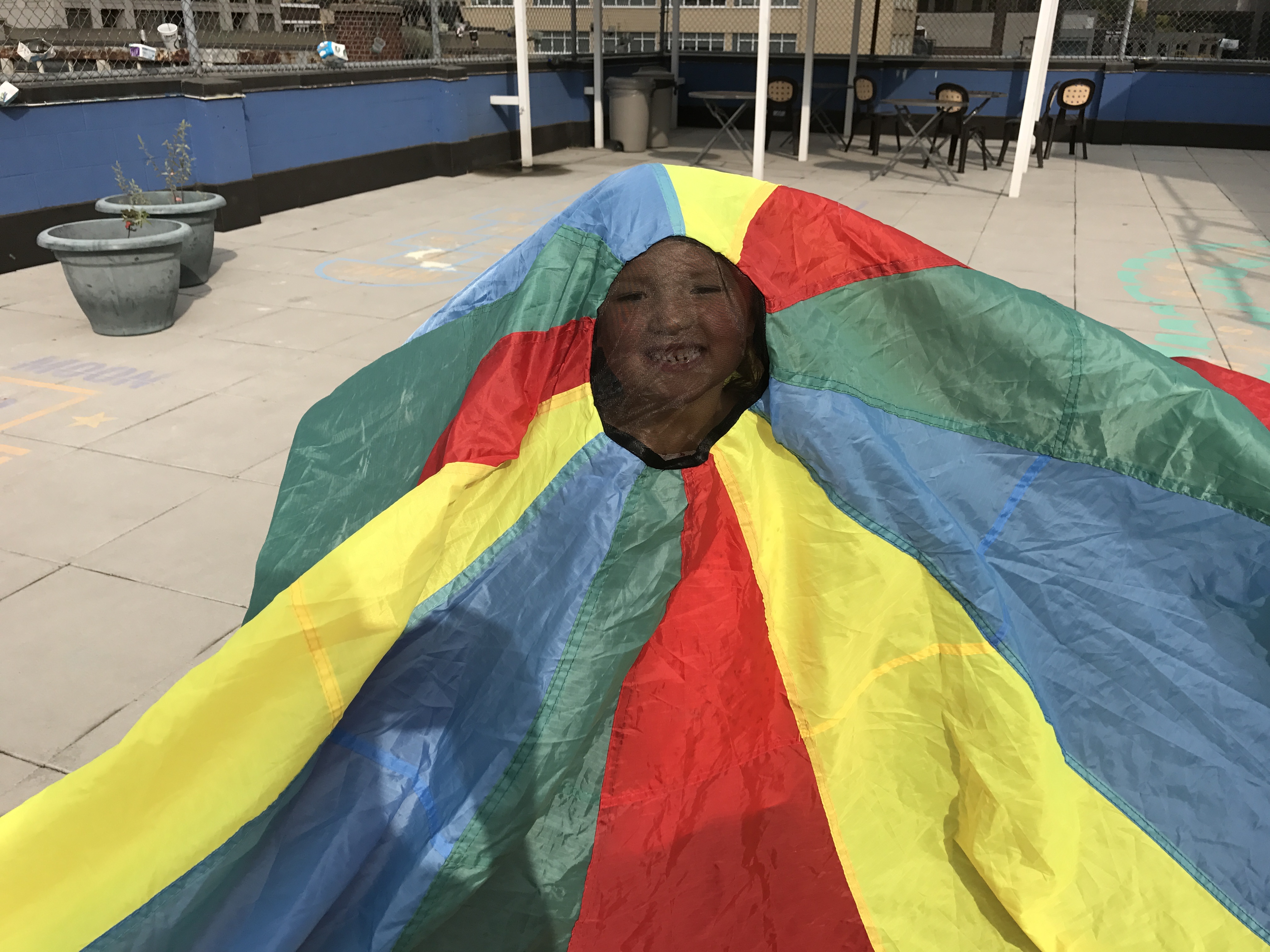 K loves peeking through the mesh hole in the parachute during recess. 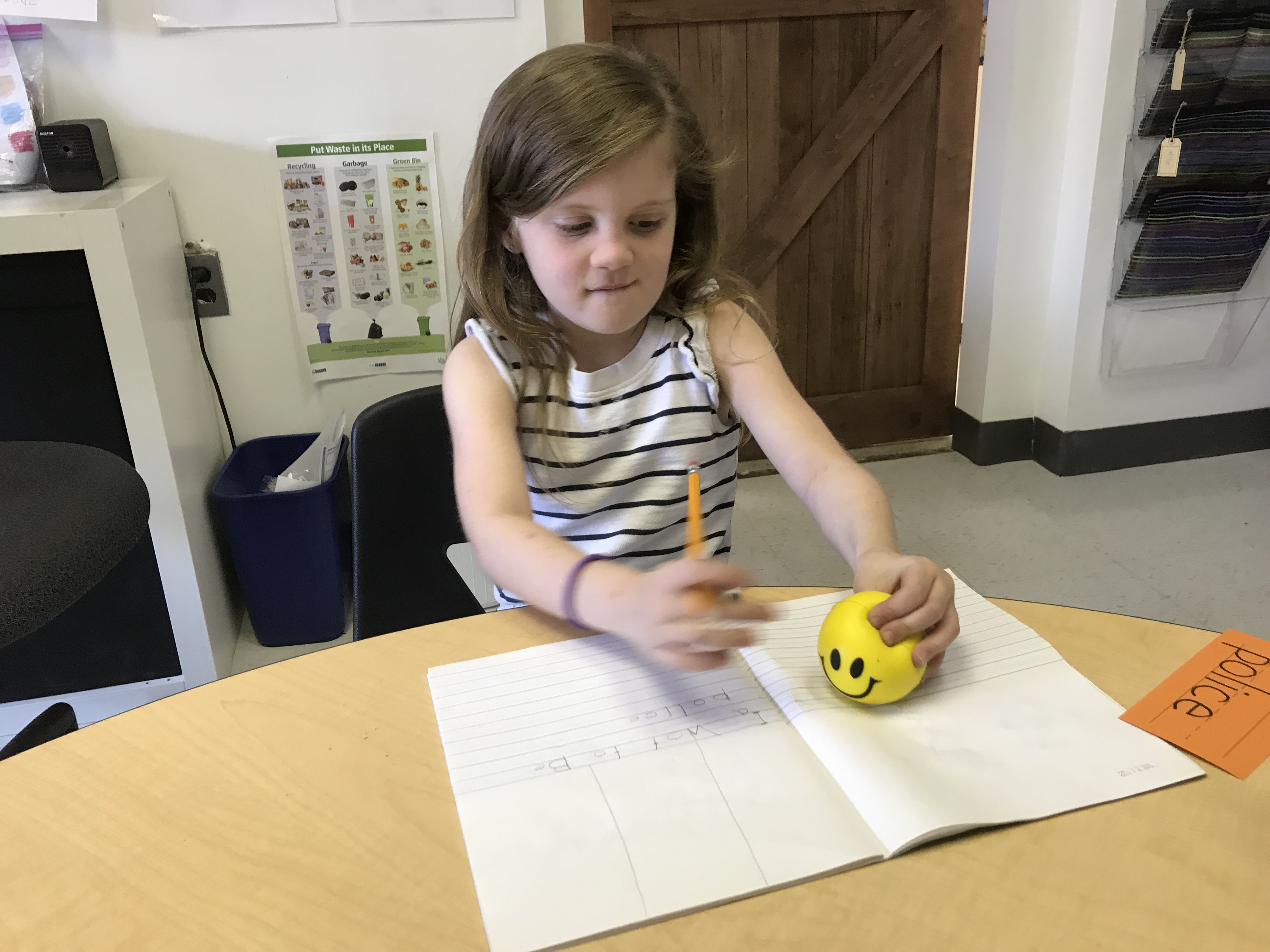 G uses a stress ball during Writer's Workshop to isolate sounds in unfamiliar words as she tries to sound them out. 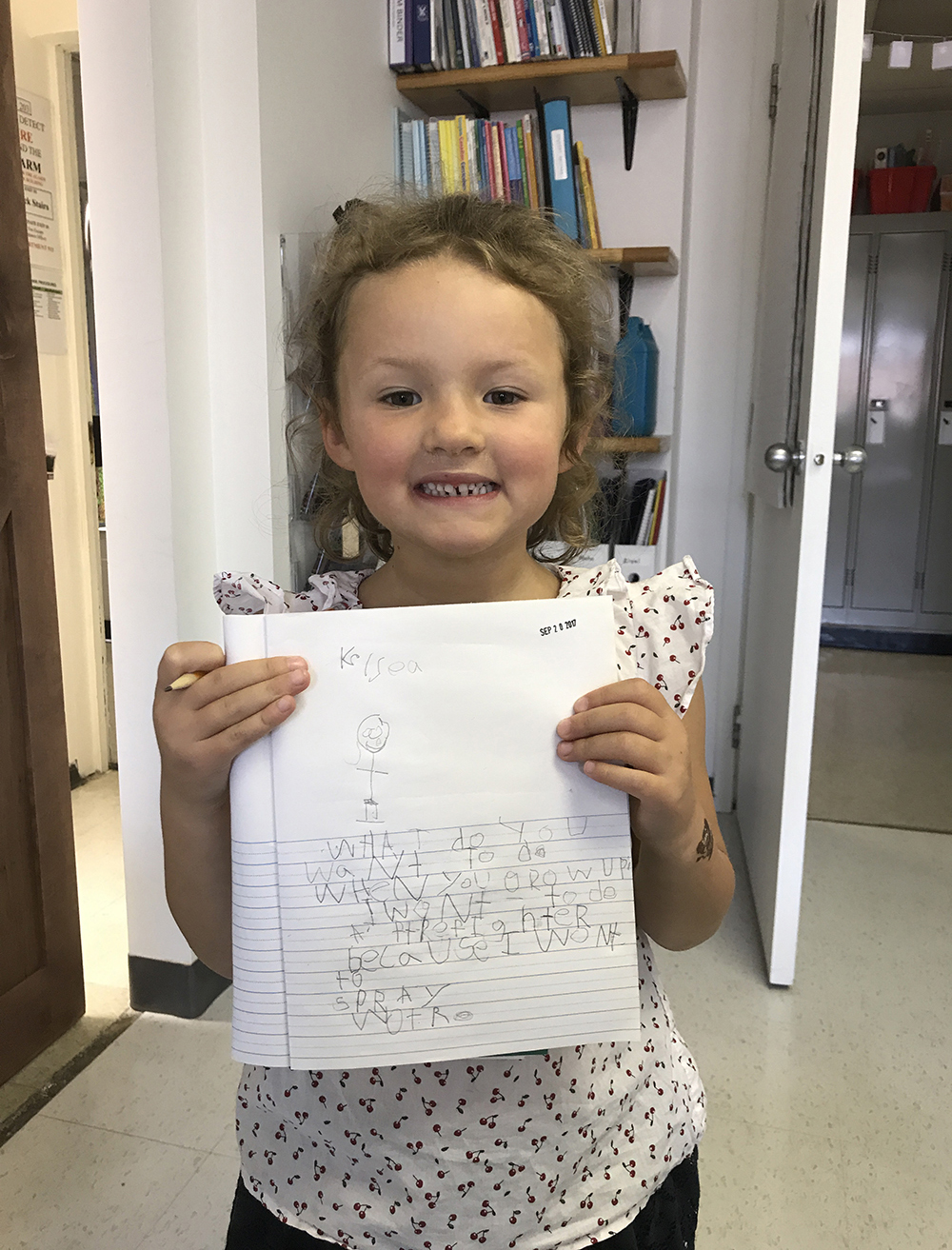 K is proud to have reached the end of the page in Writer's Workshop for the first time ever! 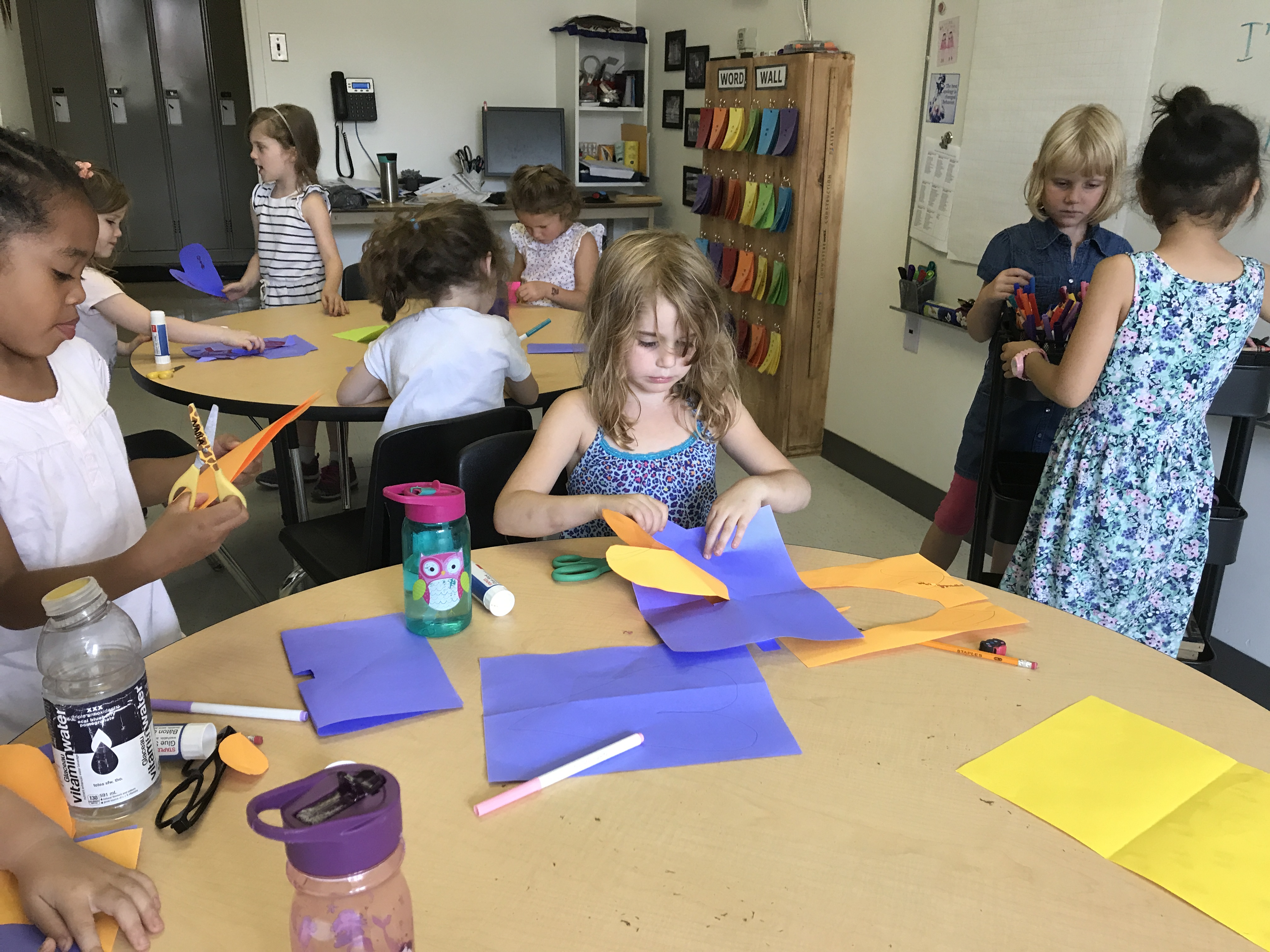 The Grade 1-2s and Early Learners collaborate to make cards for a classmate who was injured during recess. Several students helped model strategies for creating pop-up cards to curious friends. 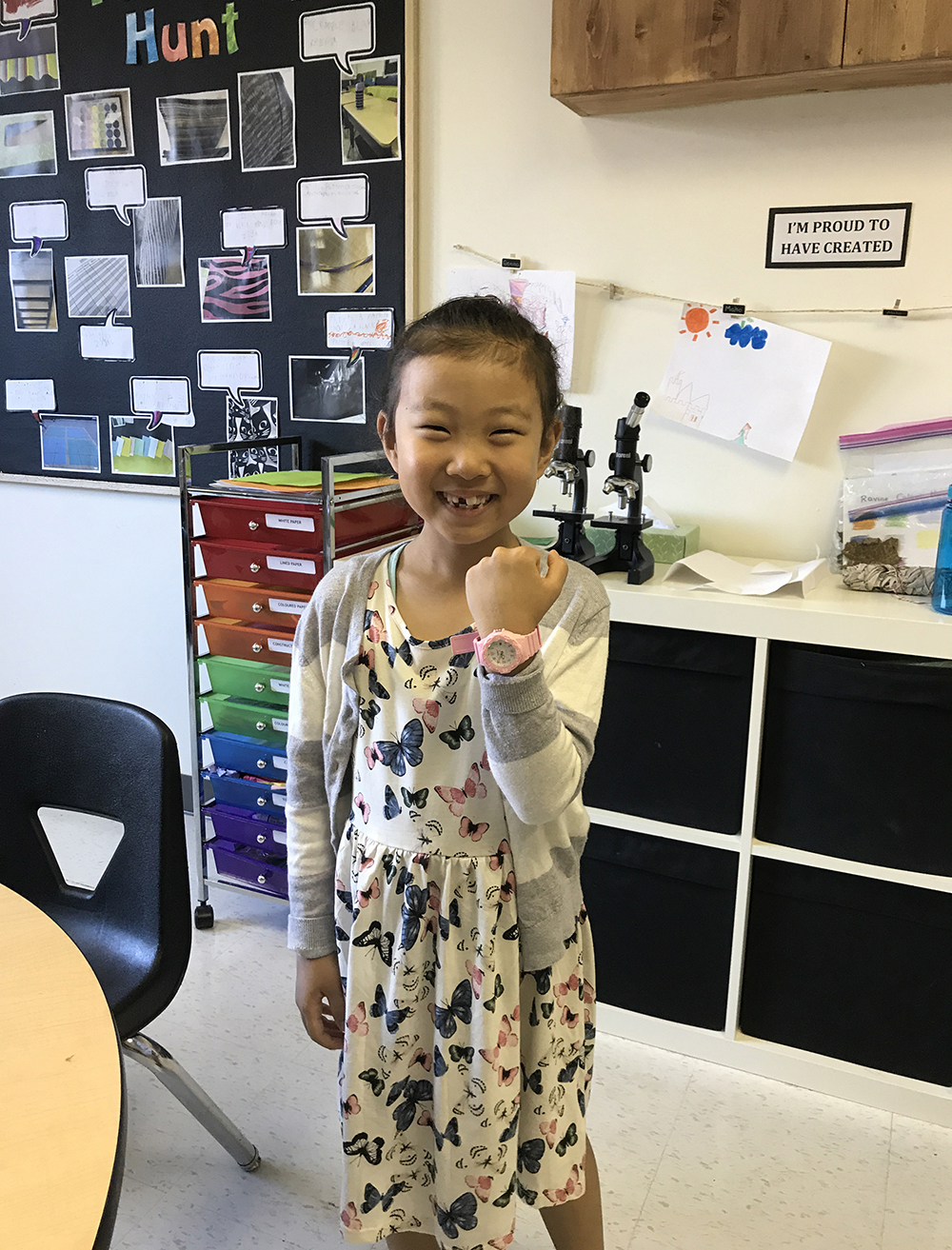 M's quote from the morning: "I look like a professional adult today. Look at my watch and sweater. I look like I'm going to work." 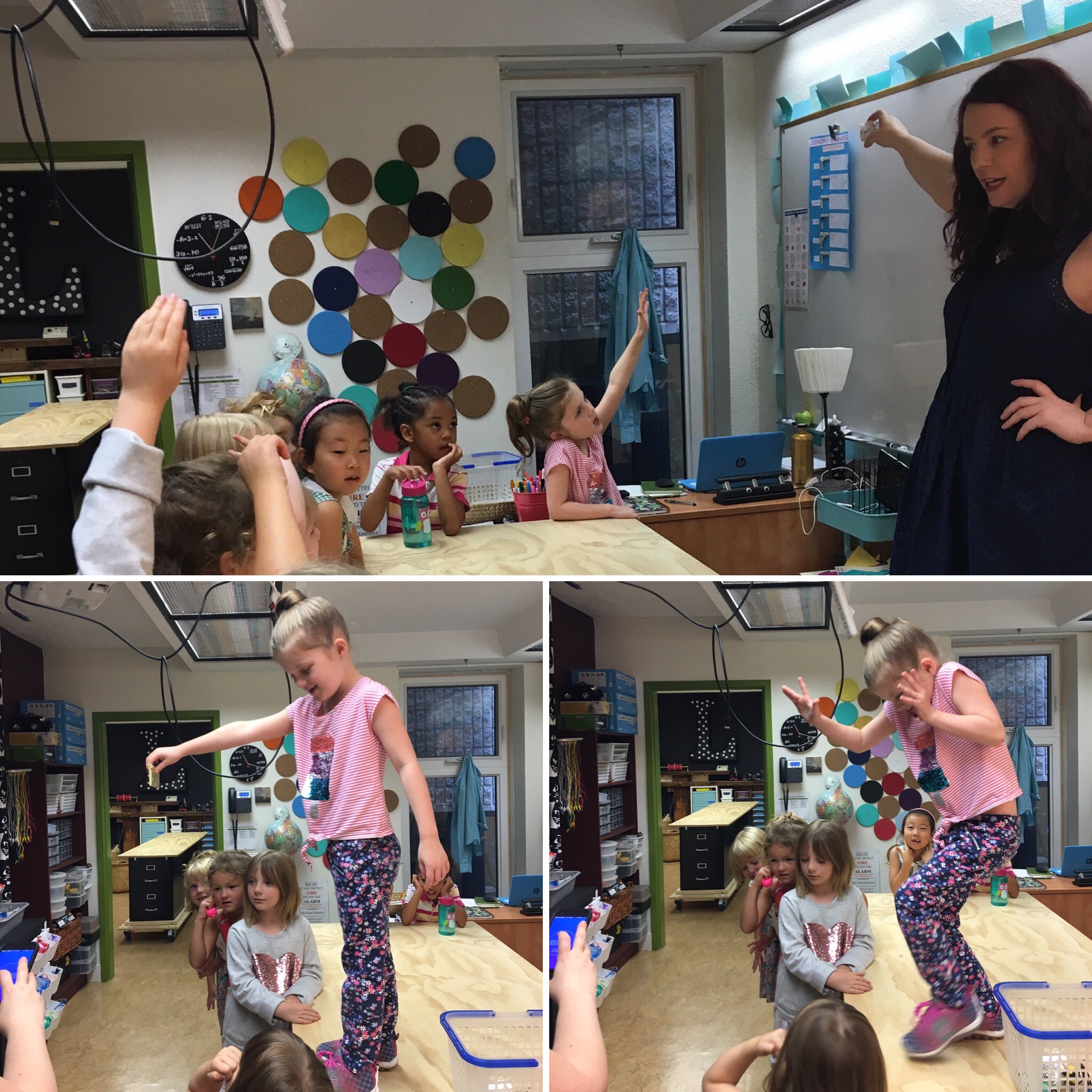 Students test how quickly different materials fall to the floor. G is surprised by the noise a metal door hinge makes as gravity pulls it quickly to the floor. 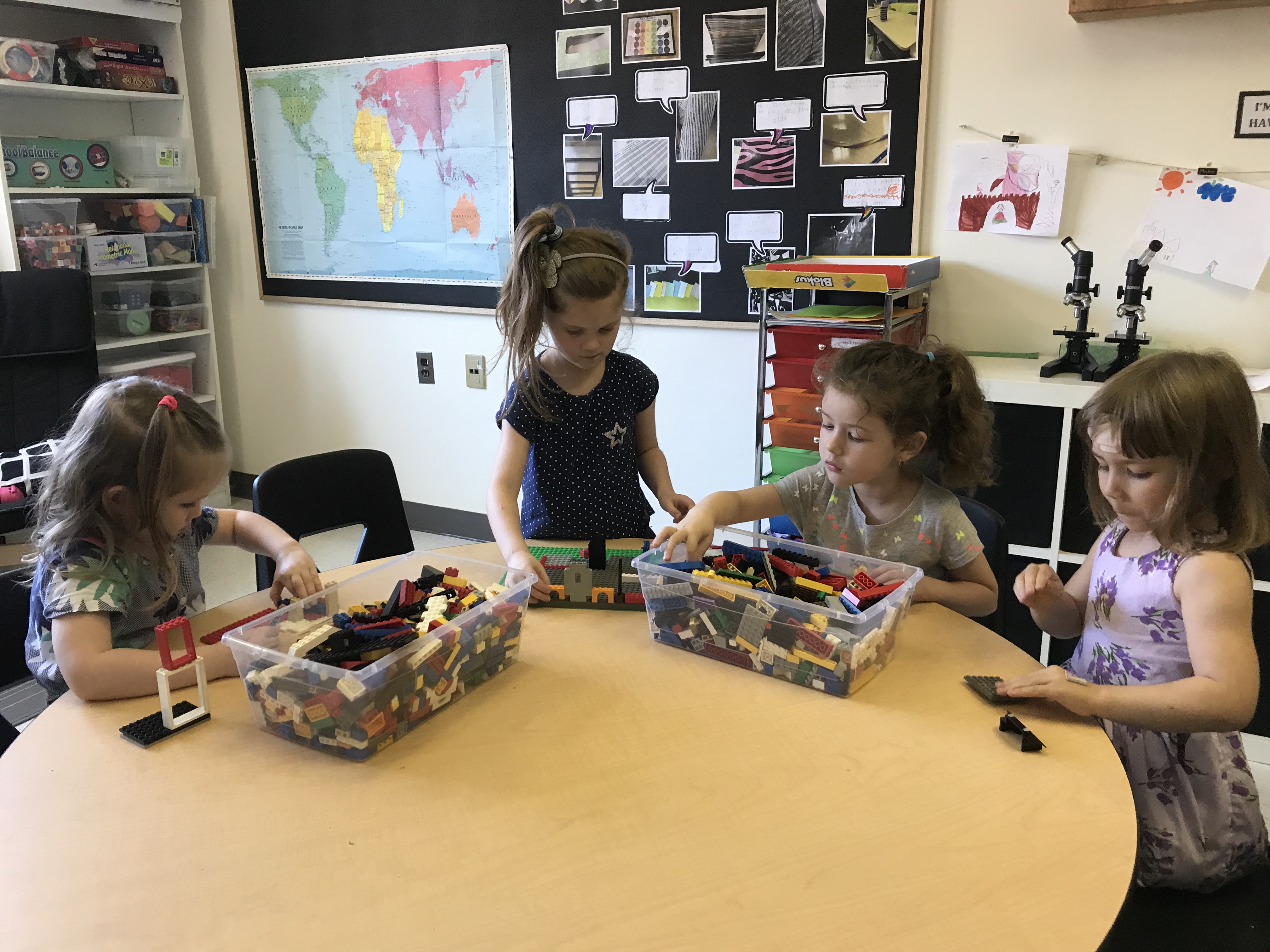 Grade 1-2s and Early Learners collaborate on a LEGO creation during a special learning centres time together. 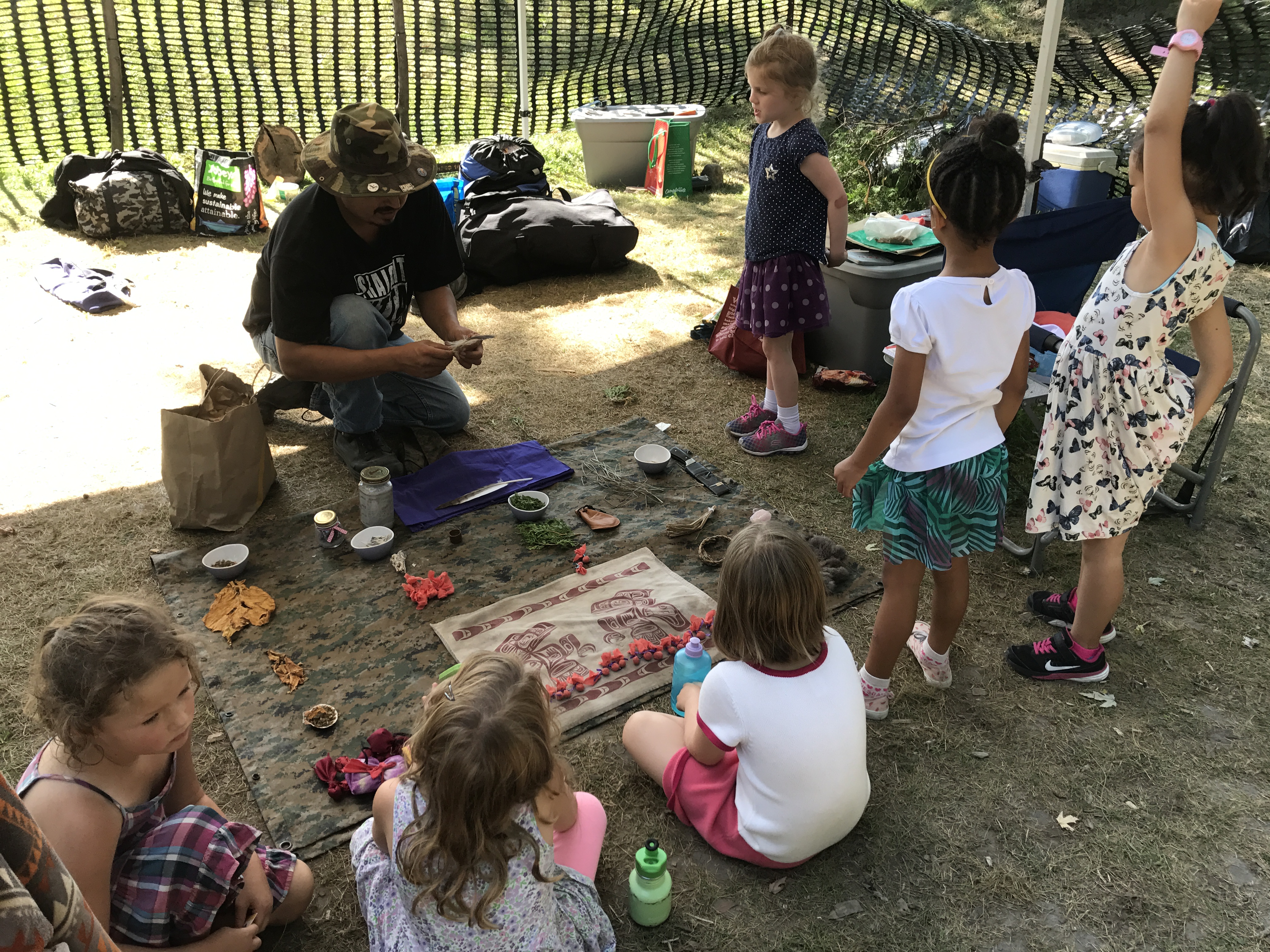 Learning about the four medicines from Geoff. The Grade 1-2s prepared and asked thoughtful questions including: 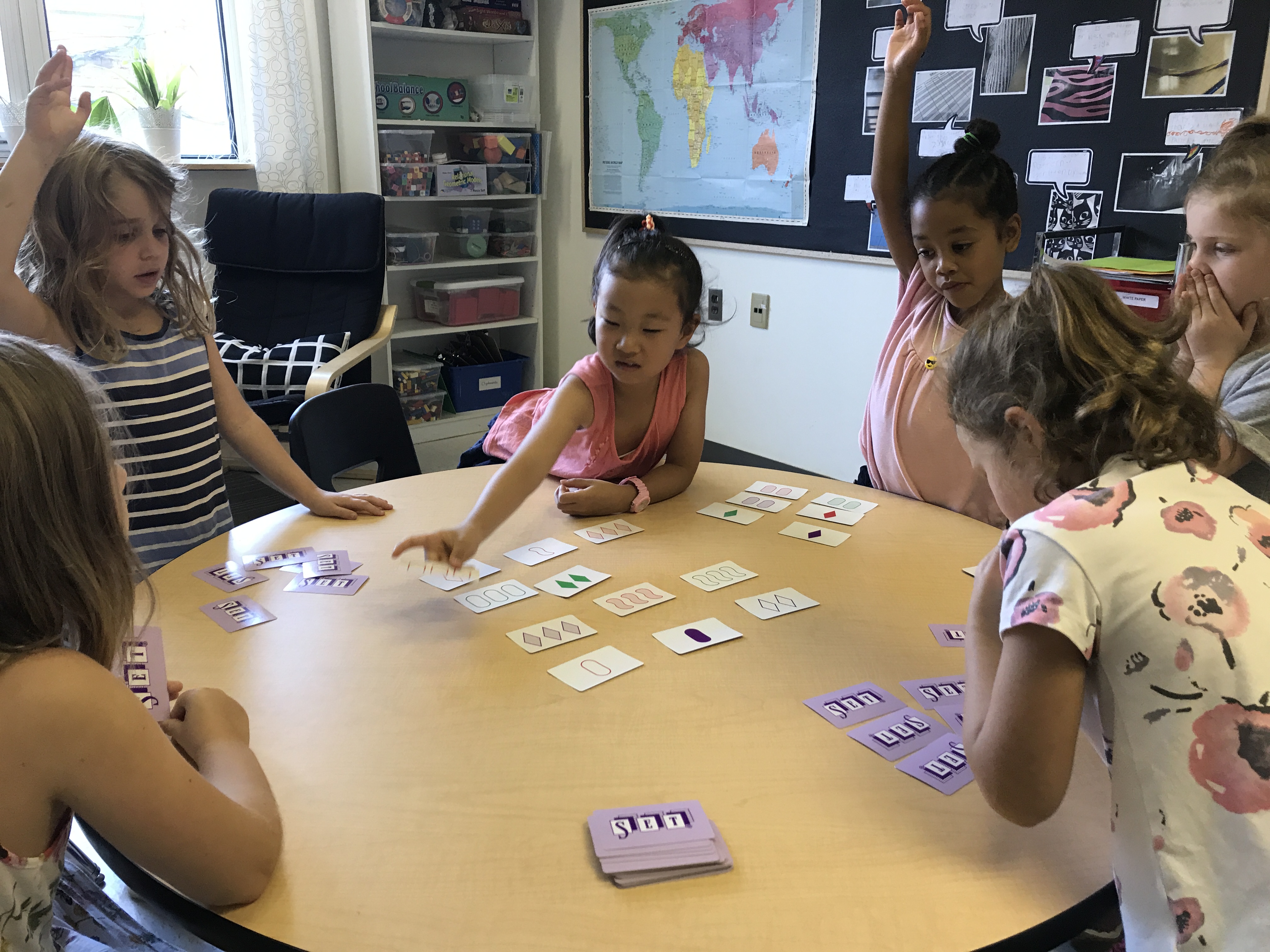 The Grade 1-2s learned a new game called Set in math class. They used their understanding of patterns and attributes to identify sets of three cards that were either uniform or all different across colour, pattern, number, and shape and played for almost an hour together! 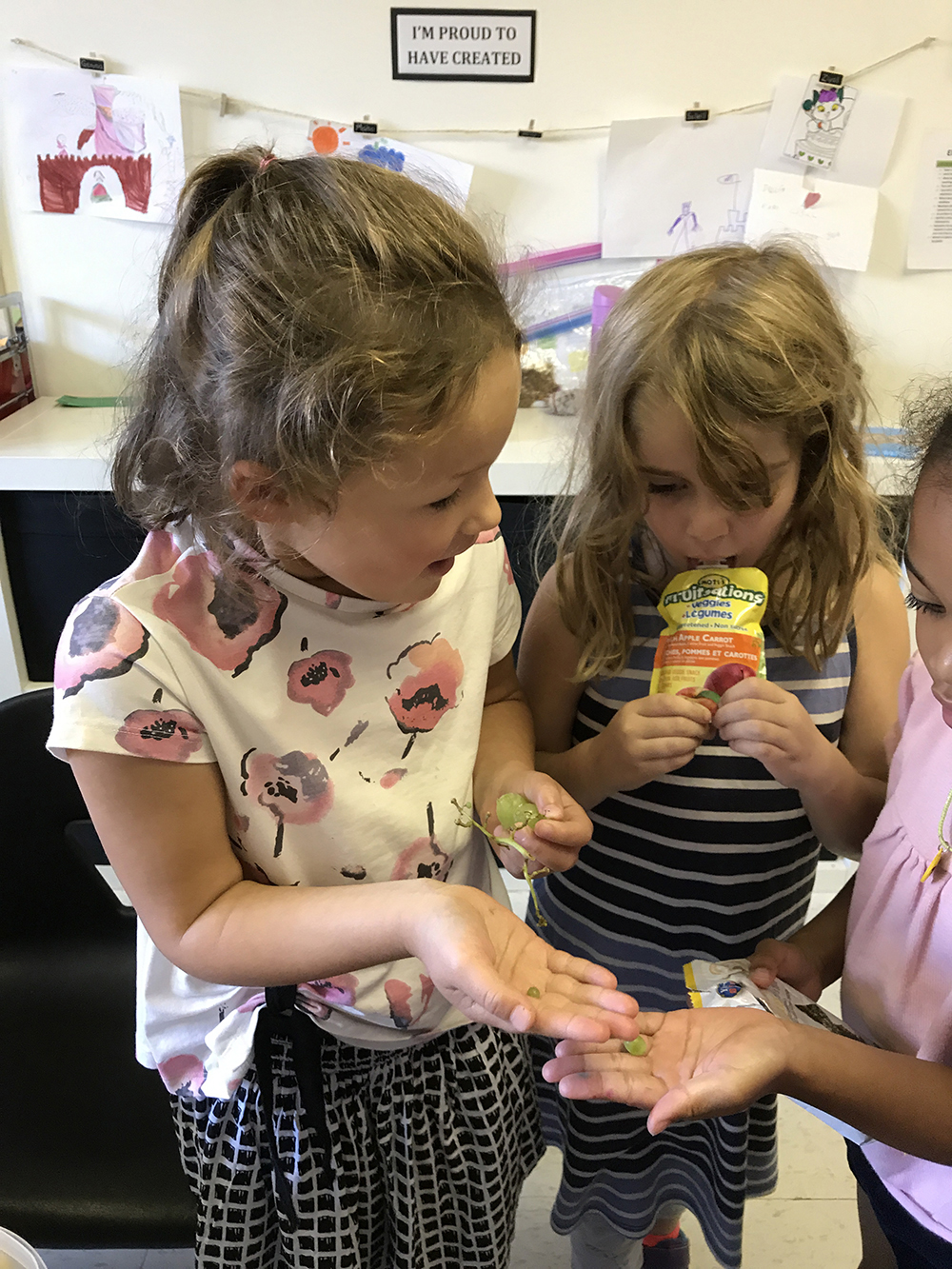 K is excited to share the "smallest grape ever" with her classmates. 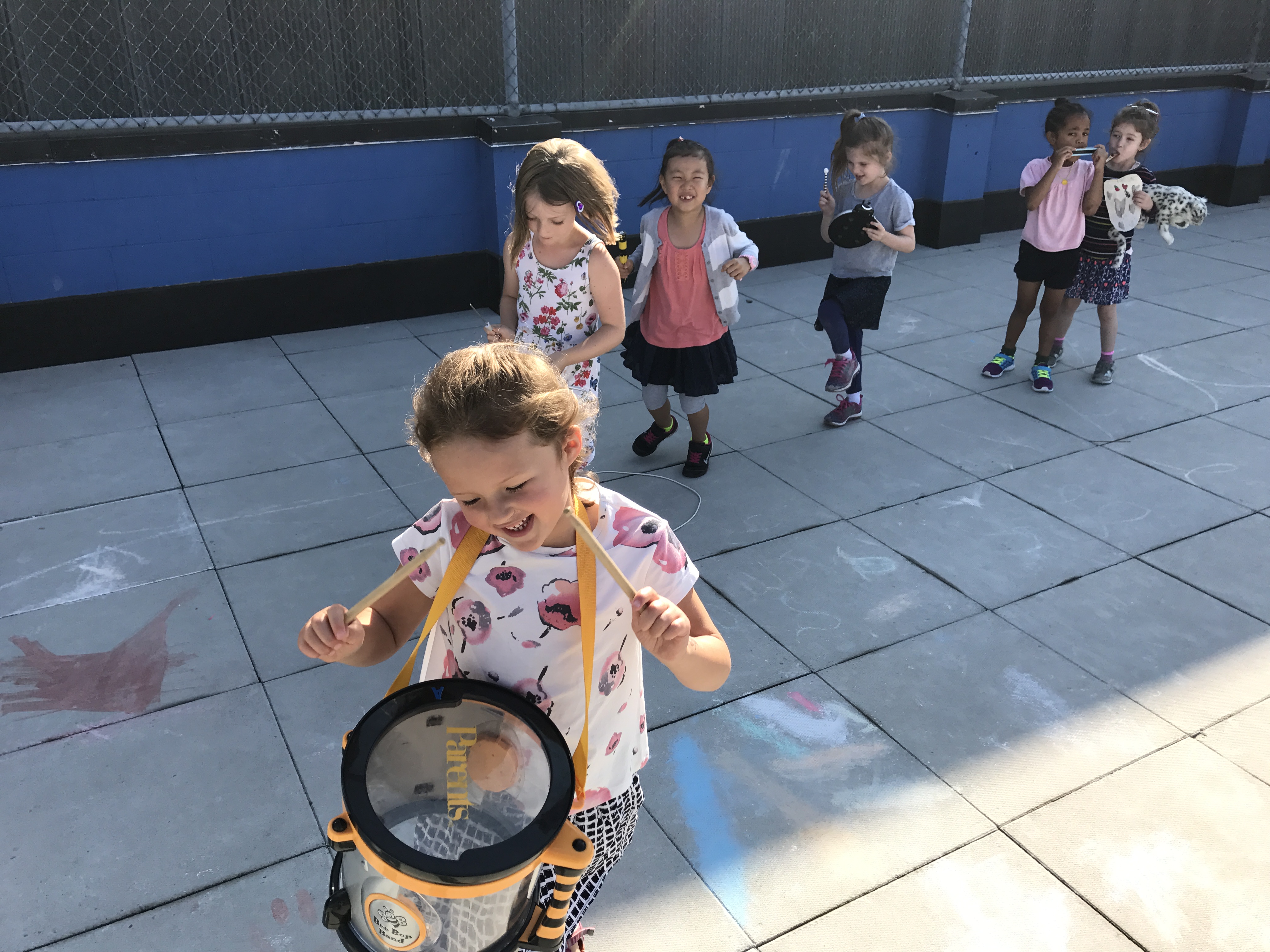 The Grade 1-2s and Early Learners enjoyed bringing our bin of musical instruments to the roof and assembling a rooftop marching band. 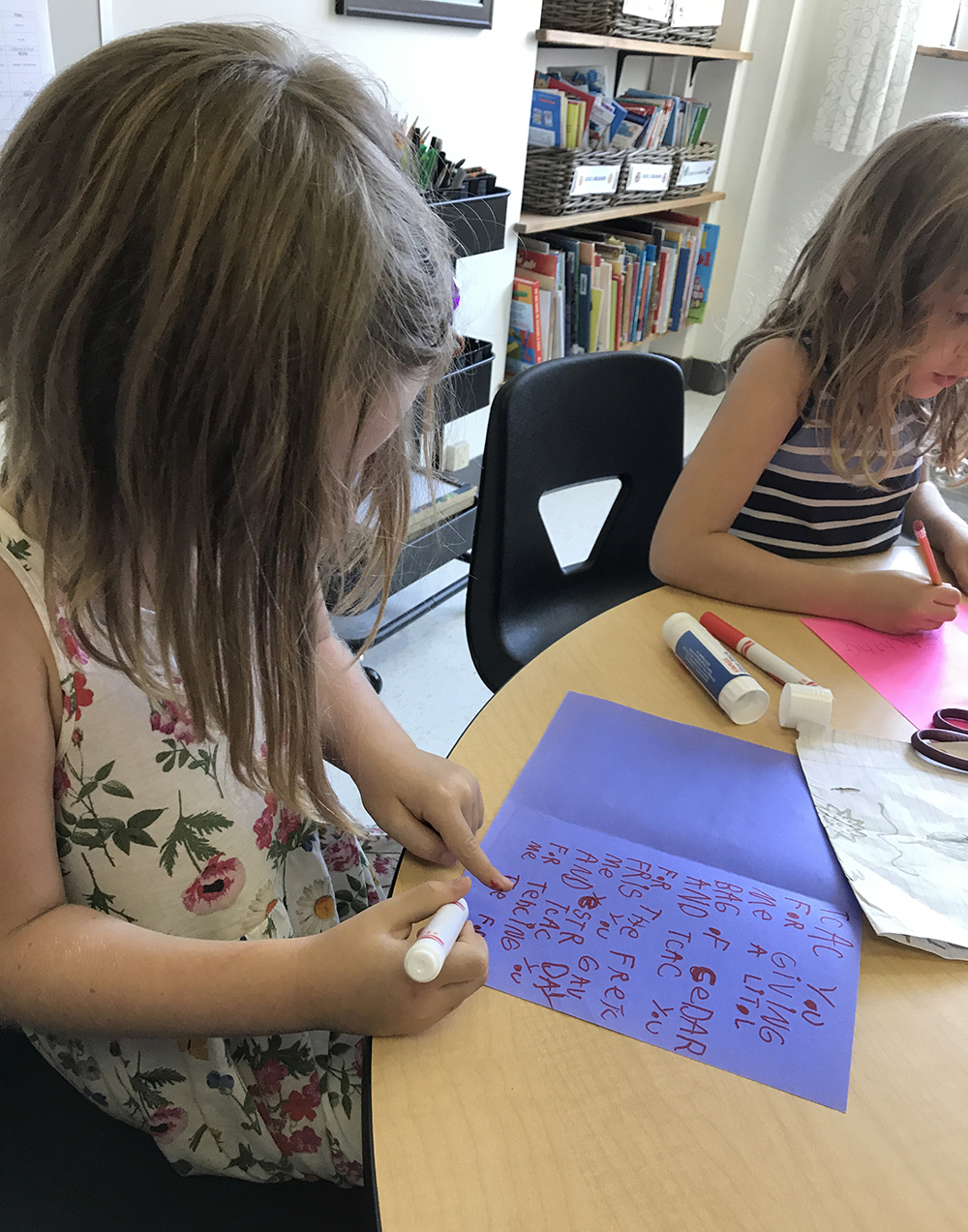 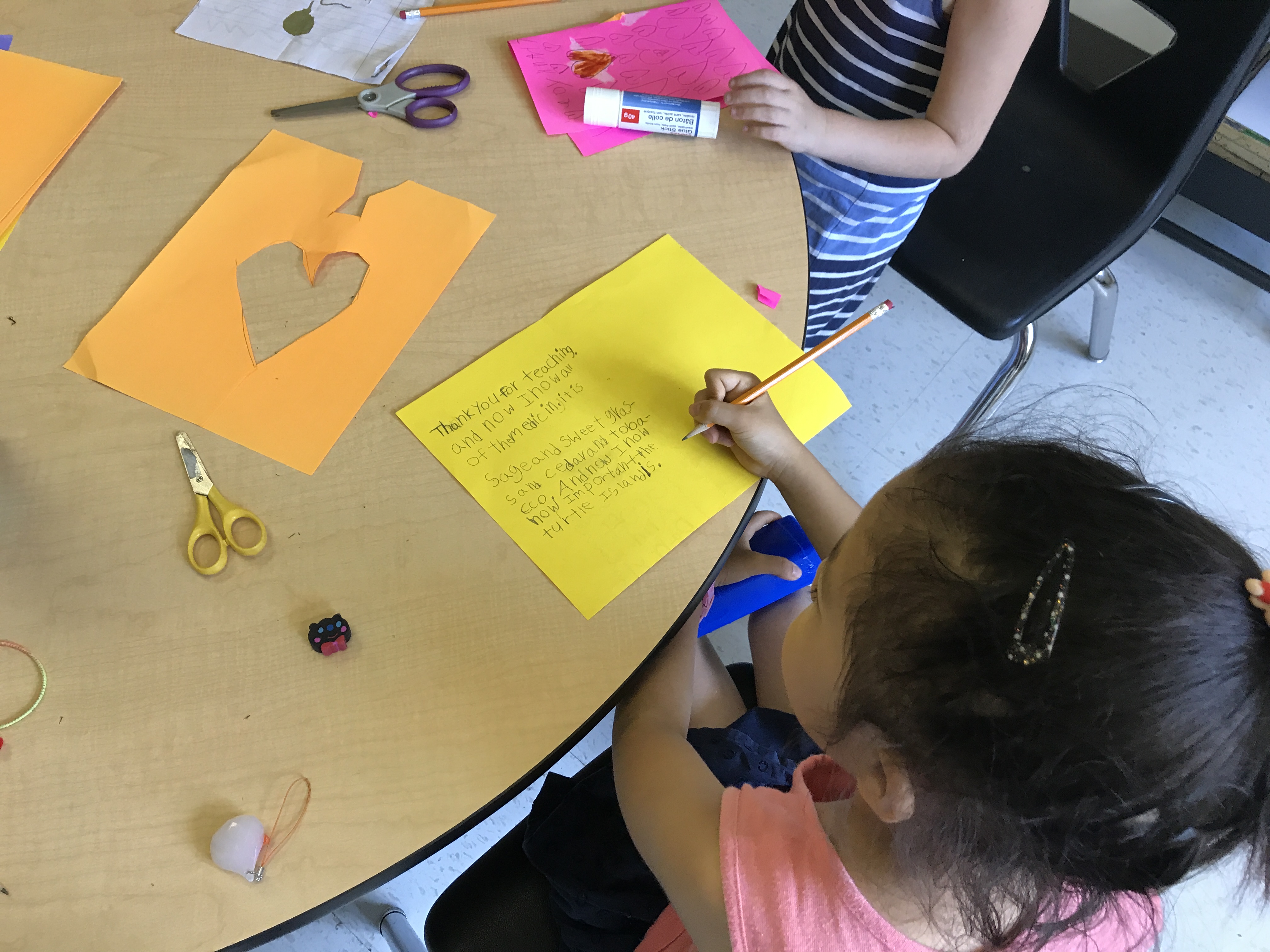 M's thank you card says "Thank you for teaching. And now I know all of the medicines. It is sage and sweetgrass and cedar and tobacco. And now I know how important the Turtle Island is." 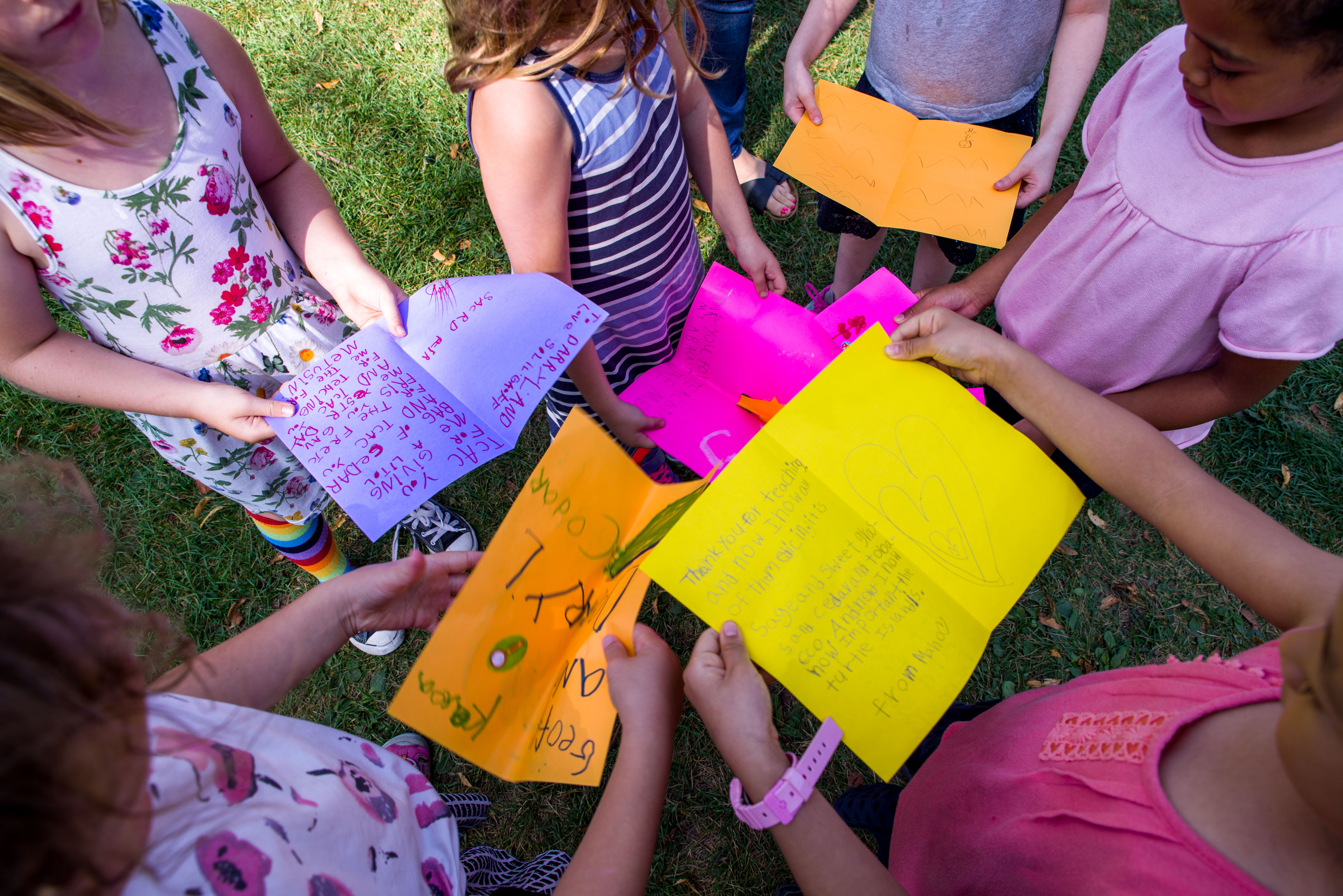 The Grade 1-2s deliver a collection of thoughtful thank you cards to Geoff and Darryl in recognition of the teaching they did during our visit the previous day. 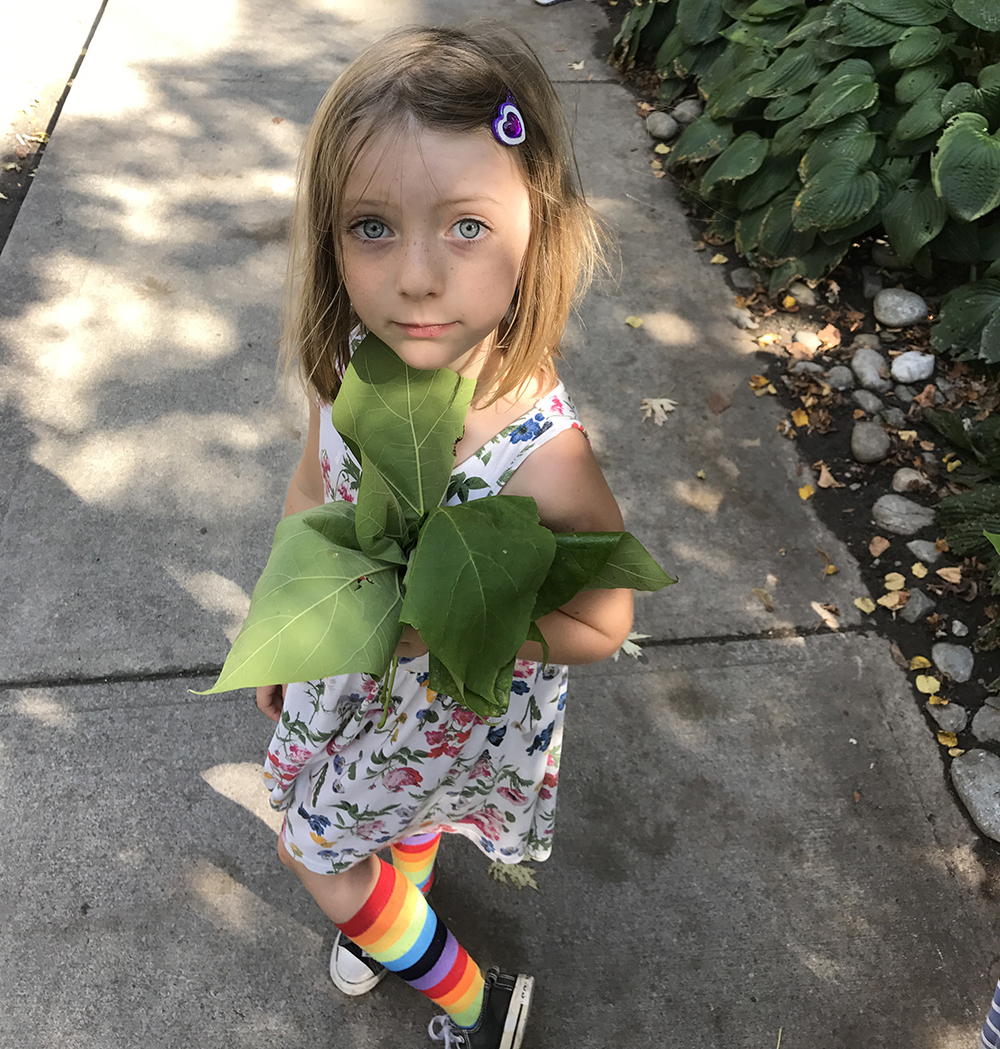 S shows the "friendship bouquet" that she built together with M. 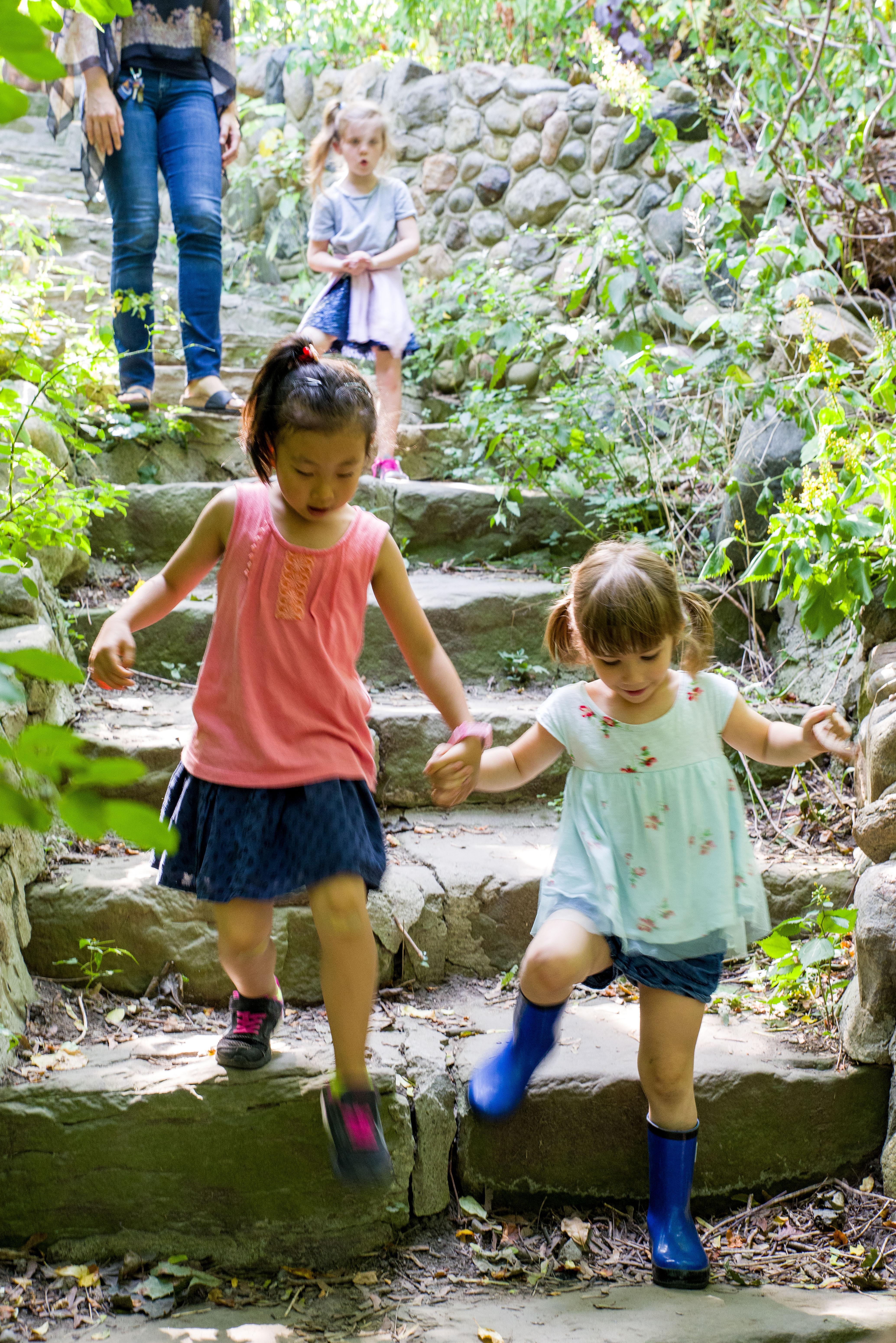 M helps A down the steps in the ravine. 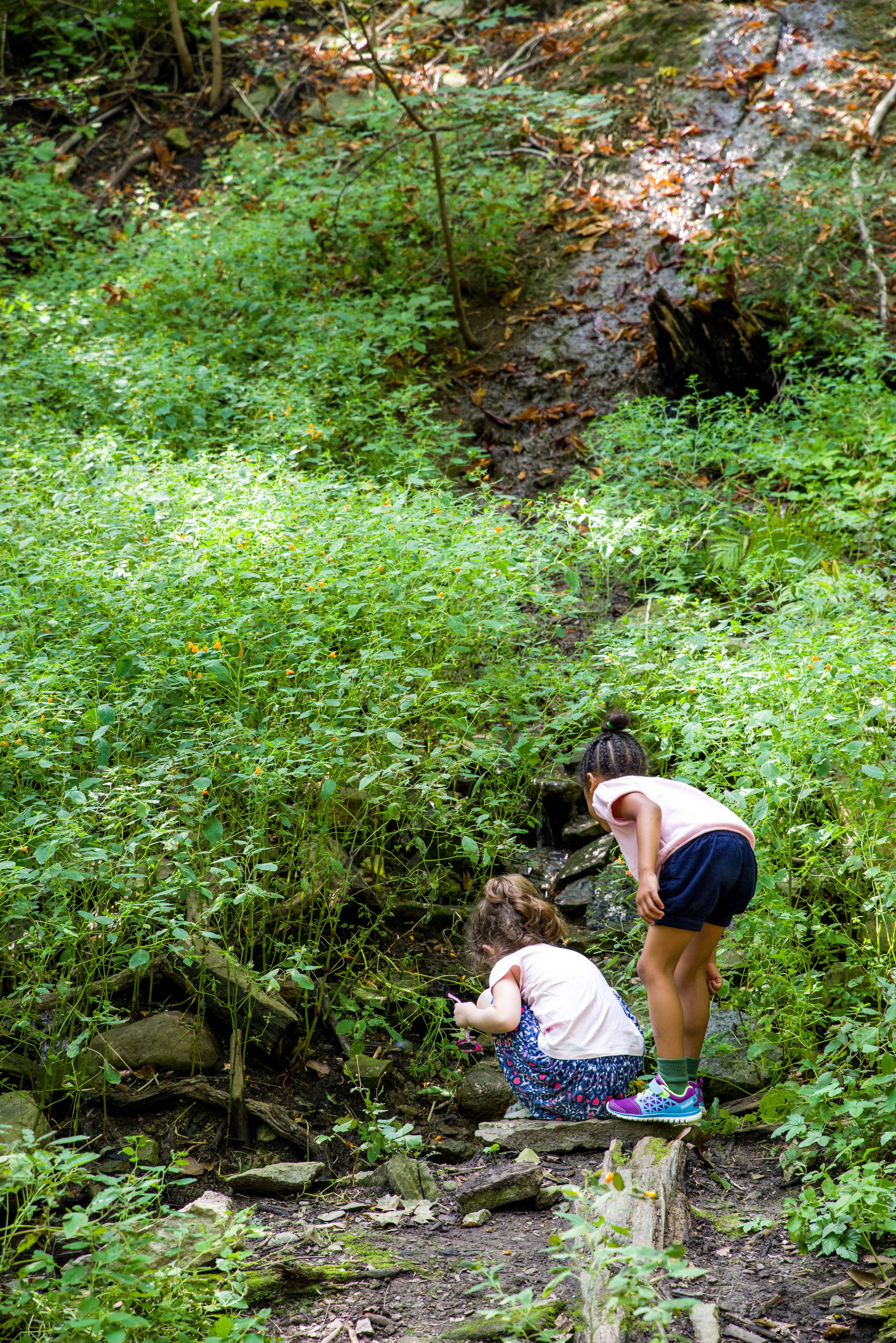 Z and K speculate about where the water is coming from in the ravine.