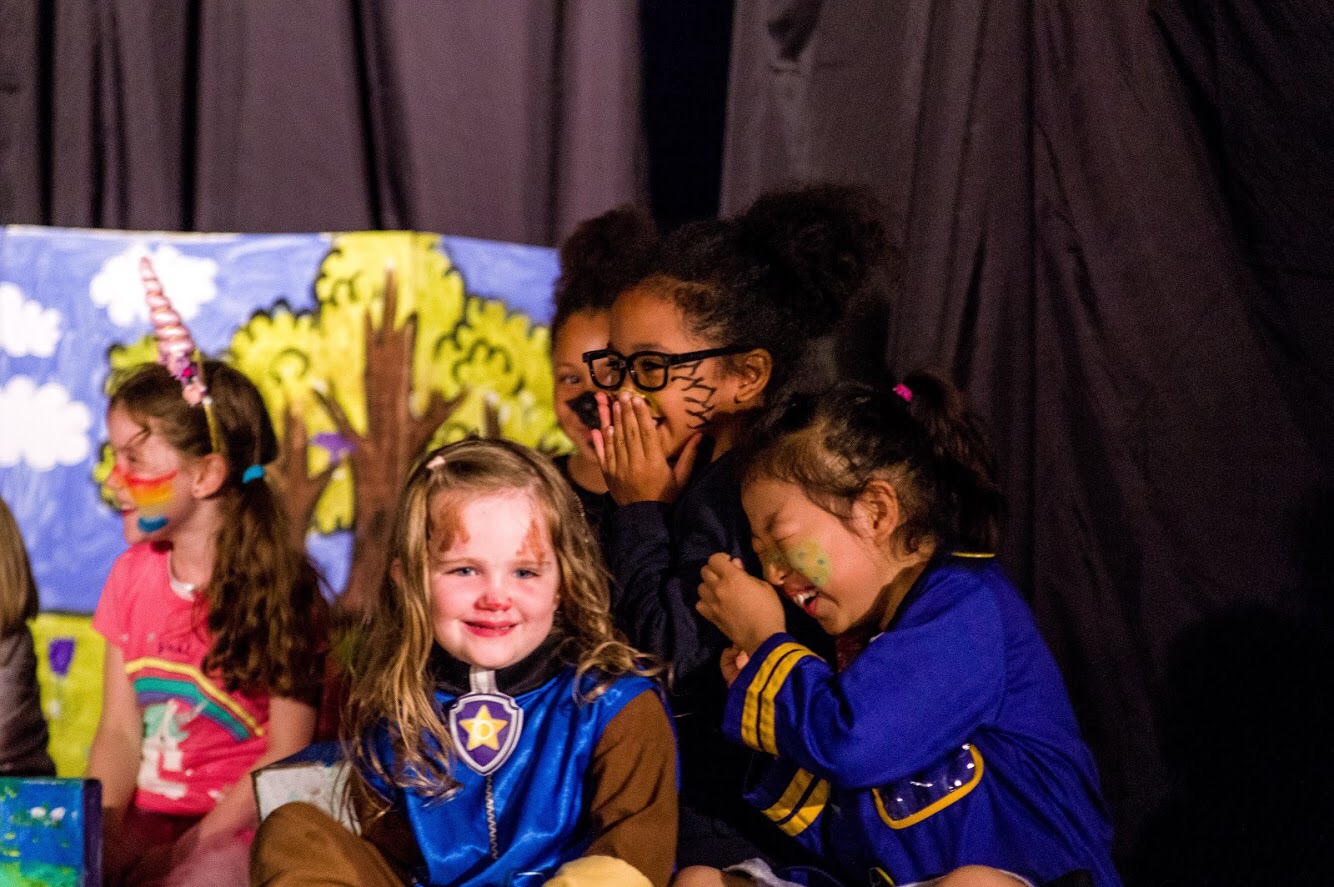 This week was arguably one of our busiest of the year in the Grade 1-2 class. Monday and Tuesday were consumed with Junior Drama Night preparations. Students worked to put the finishing touches on their props and took on multiple rehearsals each day. They also got another visit from Ryan, one of our Indigneous educators, who talked about thankfulness and used it as a stepping stone toward learning to say 'Thank you' in several languages. In CERES, students experimented with friction on a ramp.Then, on Wednesday, we boarded an early morning school bus to the Brantford area to visit the Woodland Cultural Centre (WCC). Formerly known as the Mohawk Institute Residential School, the Woodland Cultural Centre operated as a residential school until 1970 and was the oldest continuously Anglican-operated residential school in Canada. In 1972, ownership of the school was transferred to the Association of Iroquois and Allied Indians who established a museum and cultural centre at the site. The Grade 1-2s began their day with a museum tour to learn about the Haudenosaunee, Wyandot, Seneka, Cayuga, Onondaga, Oneida, and Mohawk peoples and how their lives were impacted by European colonization. After a lunch break (and an outdoor game of tag), we watched a virtual tour of the residential school. The Grade 1-2s felt particularly impacted by the story one survivor told about older boys who lifted younger boys who missed home onto the top of lockers so they could hug the hot water pipes, close their eyes, and pretend they were hugging their mothers. The WCC educators answered questions after the video and then we moved into our final activity of the afternoon: clay beading. The students learned about woodland beading designs and used them as inspiration in their own bead designs. Thursday was also full of exciting activities! In the morning, the Spectrum Club organized a fantastic carnival-style Pride celebration. There was a matching game, a rainbow fruit kebab station, a colouring station, a button-making station, and a photo booth. The Grade 1-2s learned about some of the important events in Toronto's LGBTQ+ history and had a lot of fun celebrating the start of Pride month on the roof together. Then, in the afternoon, after a great dress rehearsal, the Grade 1-2s took to the stage with the Early Learners to perform their self-authored play "Panda's Party Problem". In the play, Panda is celebrating her birthday with her closest animal friends but some of her friends are getting treated better than others. The play helped the Grade 1-2s and Early Learners voice a misconception that they run into a lot in their lives, both in school and outside of school: being underestimated because of their size and age. The actors left the stage feeling so proud and we are grateful for all the support from families who were able to make it to the event. 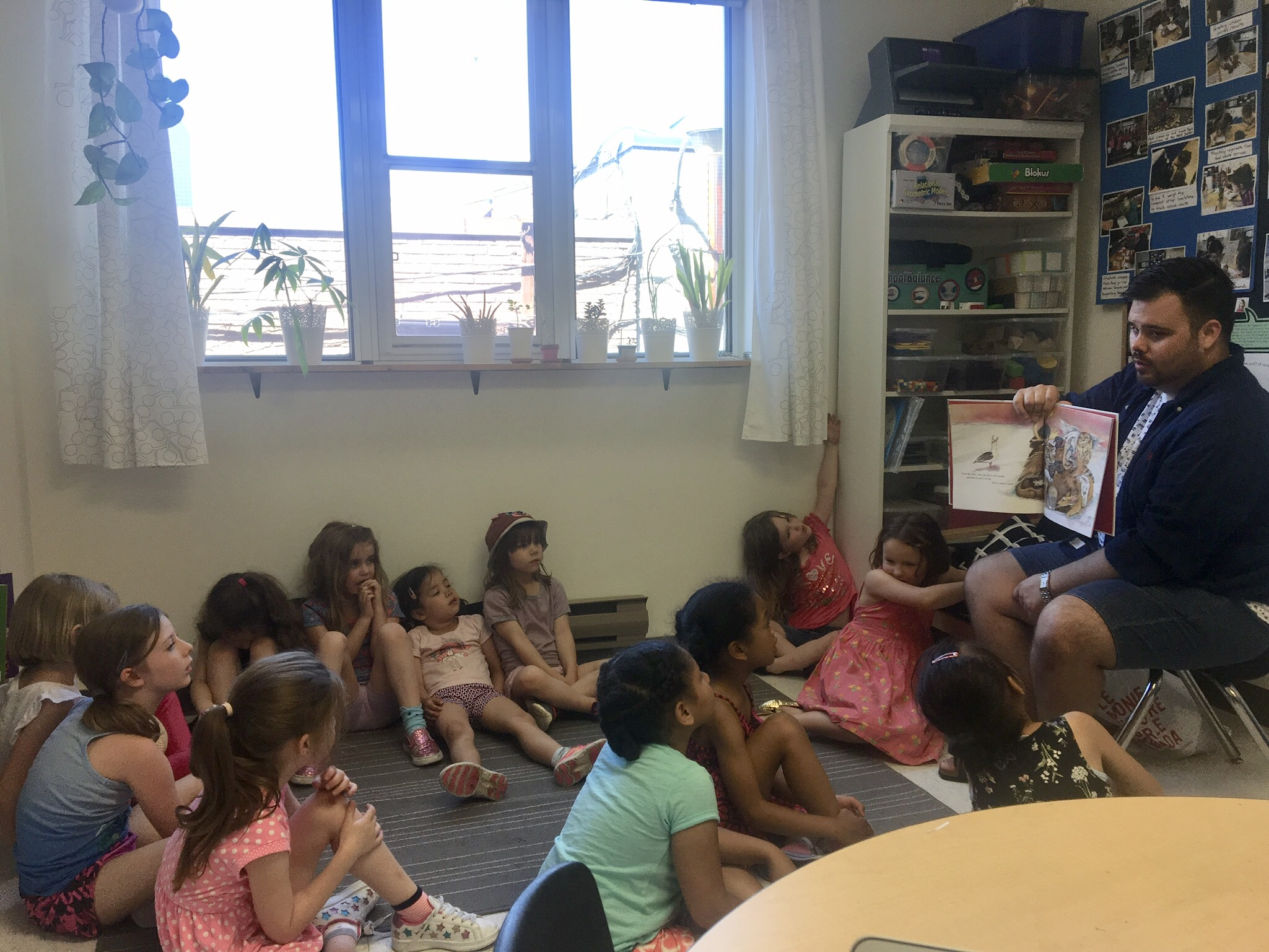 G: “Ryan was here to teach us the 7 Grandfather Teachings. In the story, this little boy was lost when he fell off the sled and his father went on a journey to find him. I learned about the arctic wolf and some other animals who helped the boy. At the end of the story, the dad found his son and he thanked the animals.” 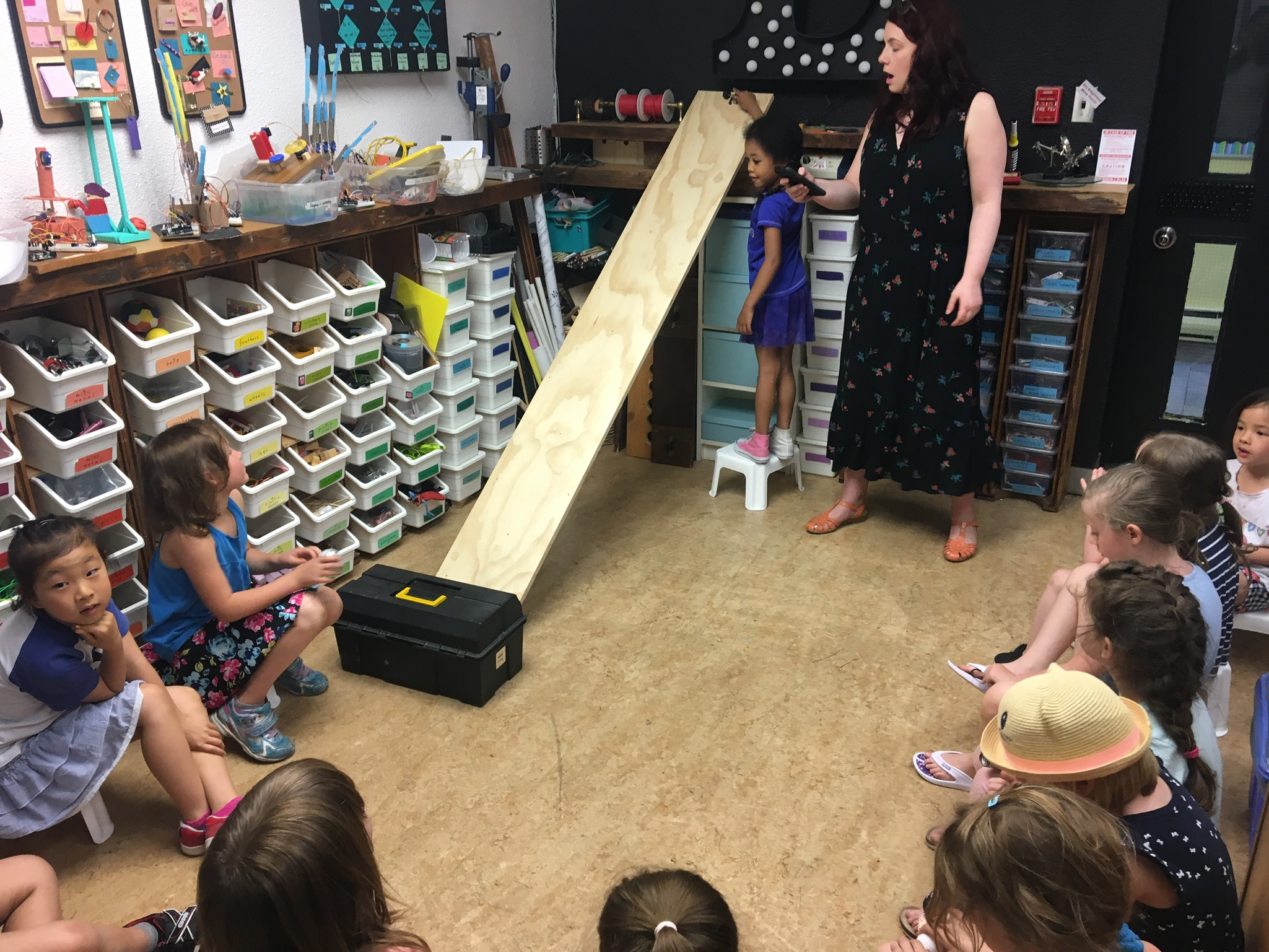 Z: “Beth let us pick items from any bins in the CERES lab. Then you brought your stool over and put your object from the top and let go. Beth was timing how fast the item went to the bottom. The fastest item was G’s metal ball that was really heavy.” 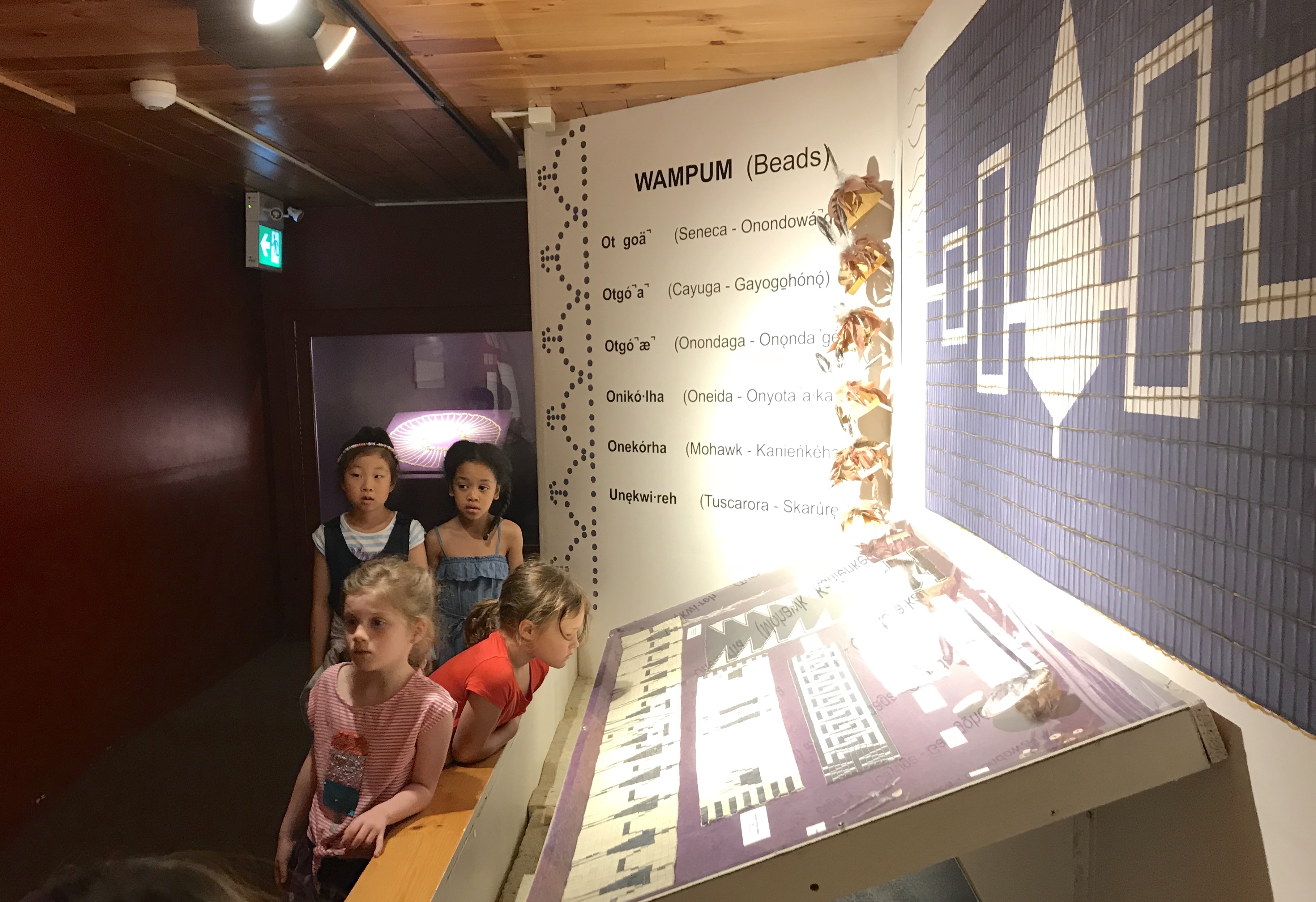 K: “When we went on our field trip to the Woodland Cultural Centre, we were looking at seashells and the boards. These wampum belts were for people to learn about the stories that explain about the land being taken away. They were also for promises.” 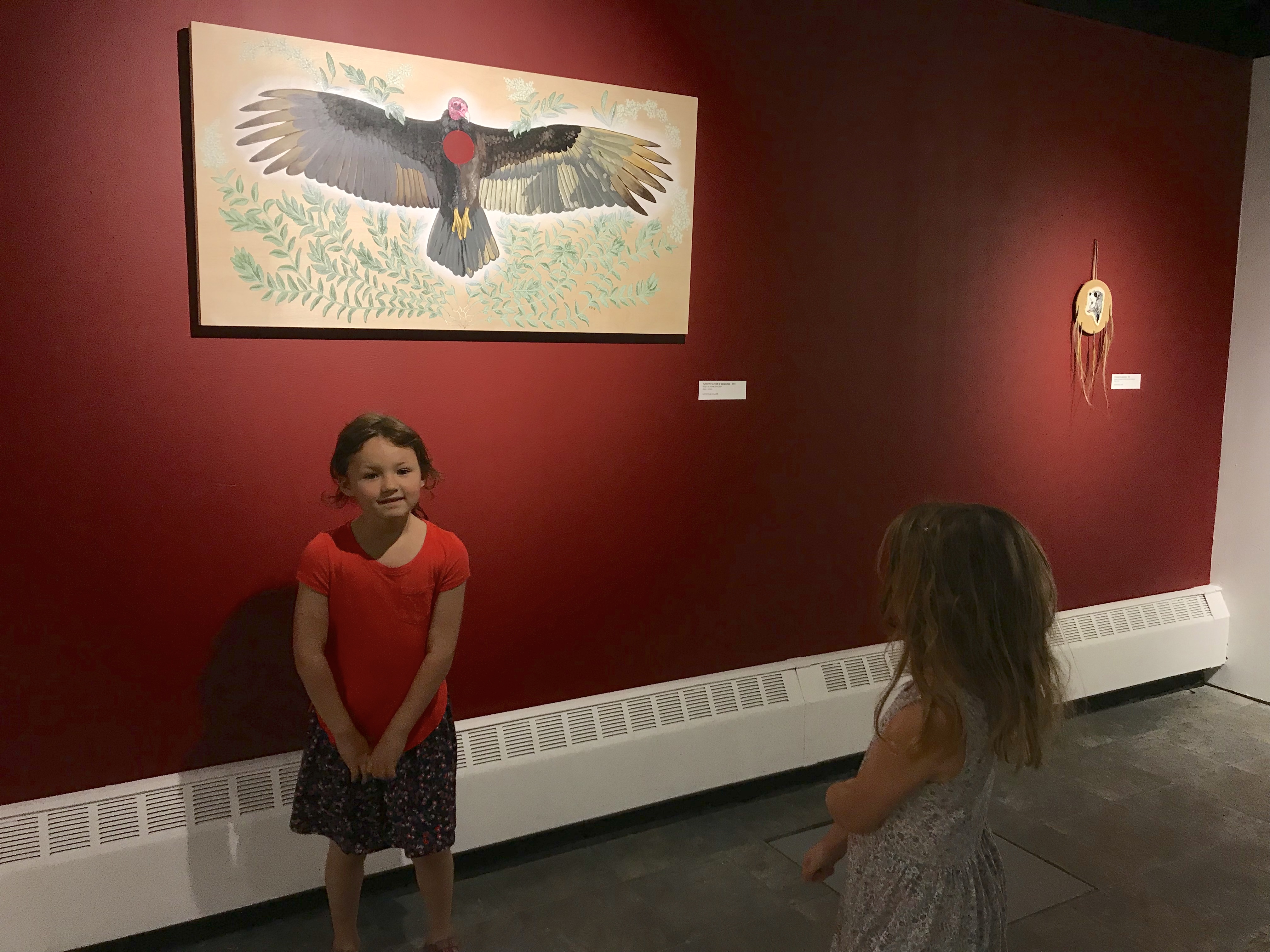 K: “I was standing in front of a picture of a turkey vulture. It was a painting and it has lots of really good colours in it.” 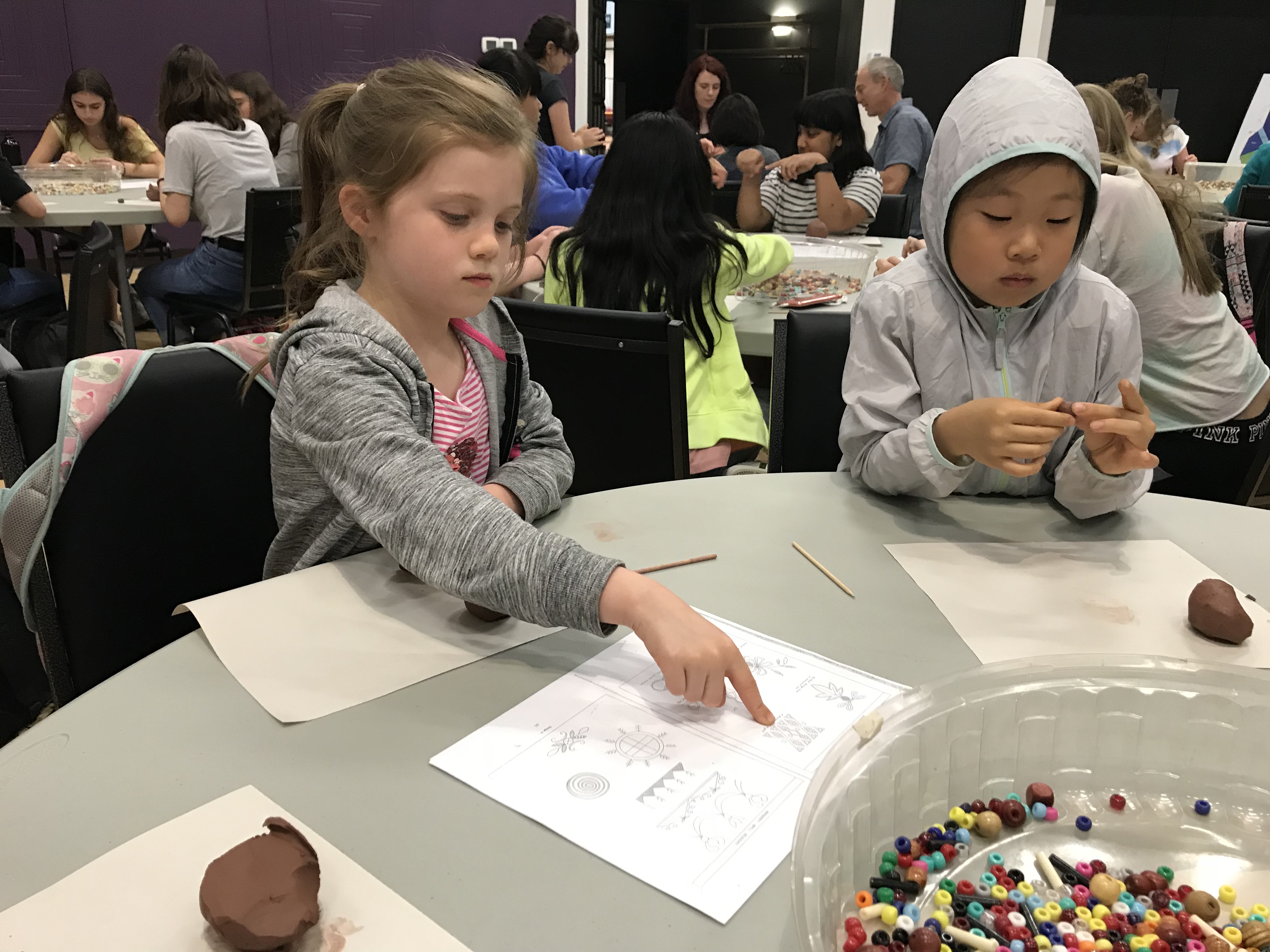 G: “I was doing a project of making a clay bead necklace. I was pointing to the fancy decorations that made me inspired. Then I changed my mind and made my own decorations. Then I added some fancy black and blue beads to finish it off.” 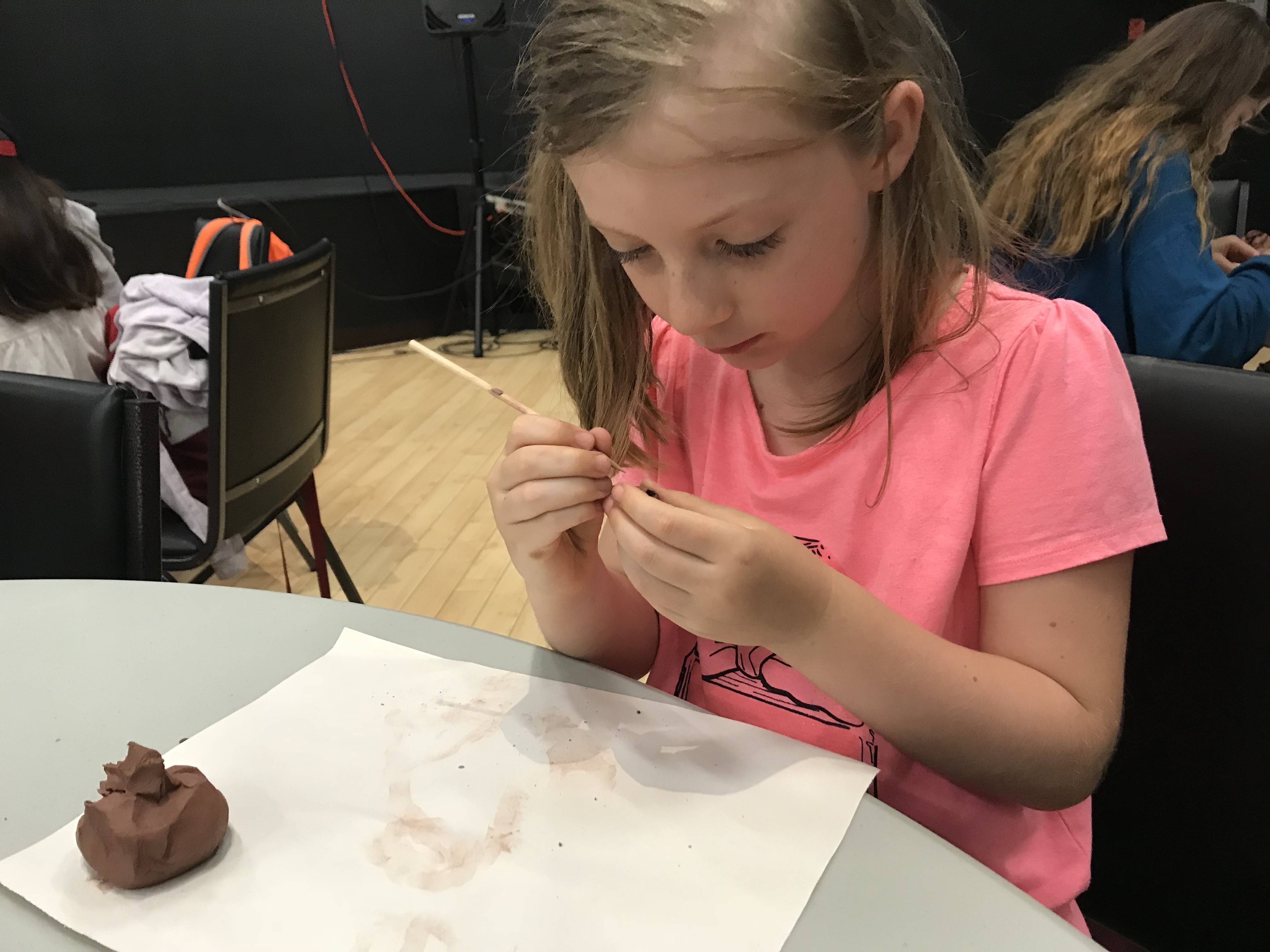 S: “At the Woodland Cultural Centre, I was making beads out of clay and I was trying to make a design. A lot of mine look different than the designs on the papers. I think I made four beads altogether.” 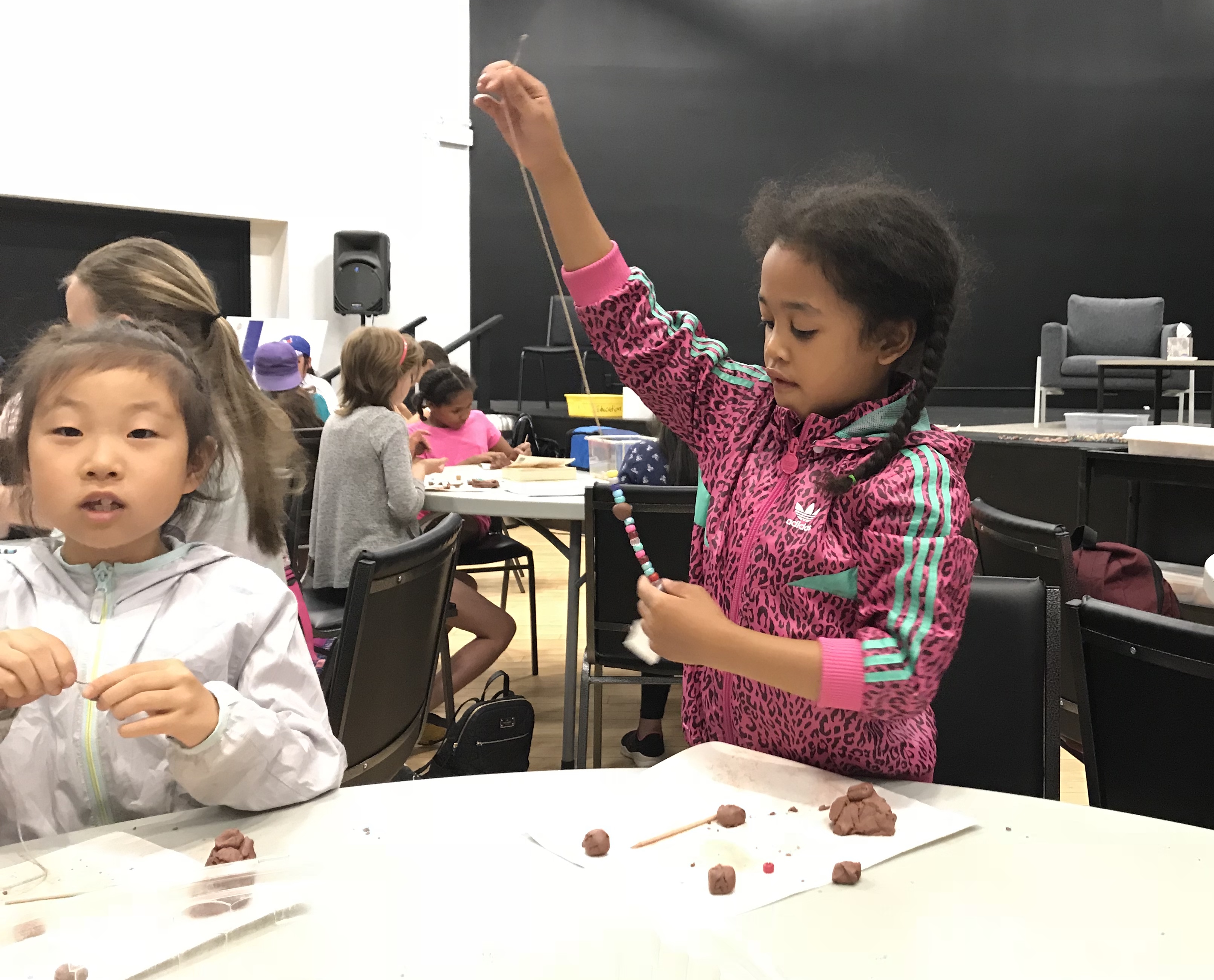 M: “At the Woodland Cultural Centre, I was making beads on a string. I was putting the beads on a string and I did my own design. I added some beads on it so it would look nice for the clay beads. It took a while for the clay to dry. I was happy because we had forty minutes to do it. I almost couldn’t finish but then I finished on time.” 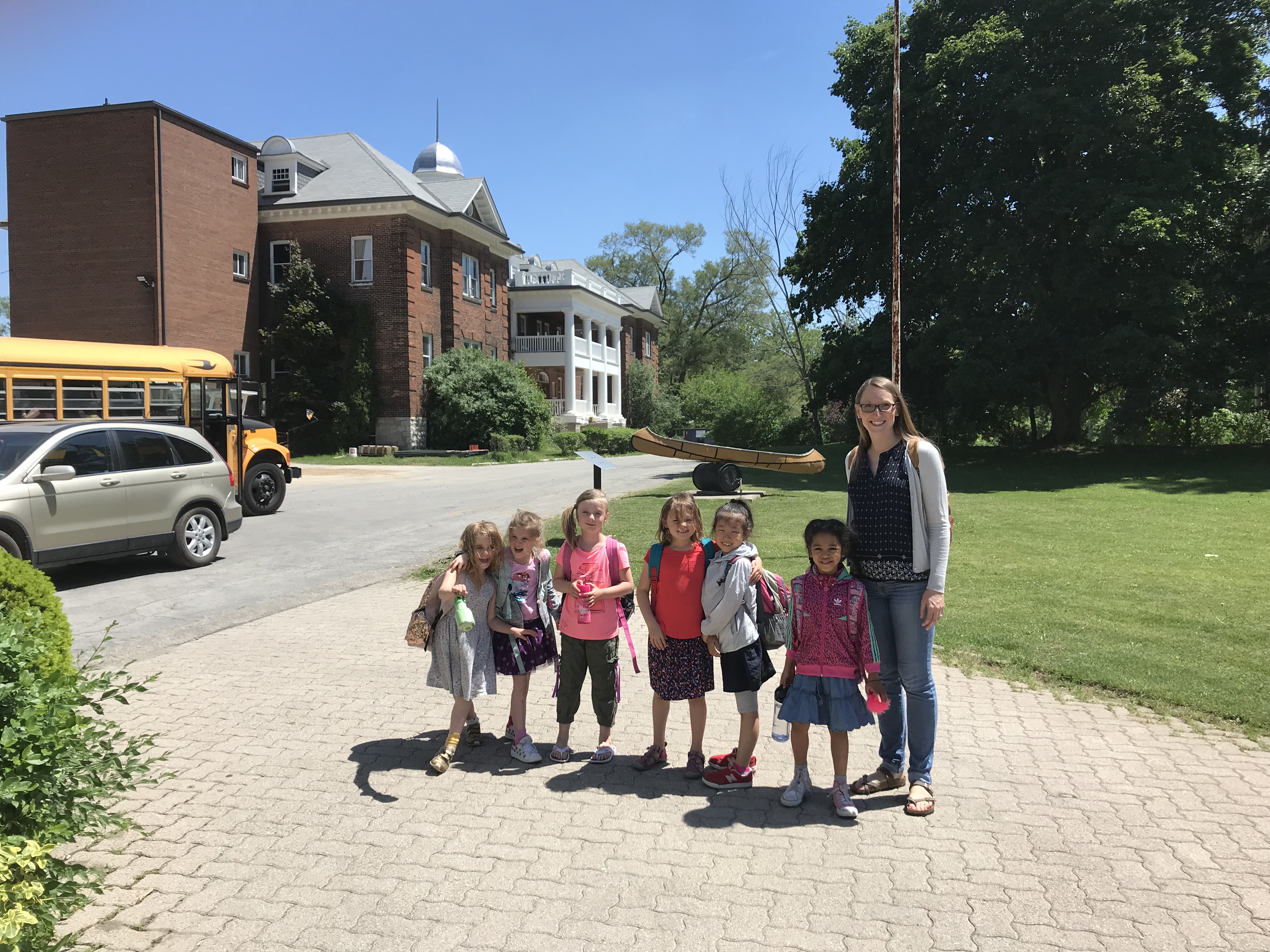 M: “At the Woodland Cultural Centre, there was a video about the Indigenous people that went to residential school. They were very sad because they were separated from their family and they had to do all the chores like servants.” 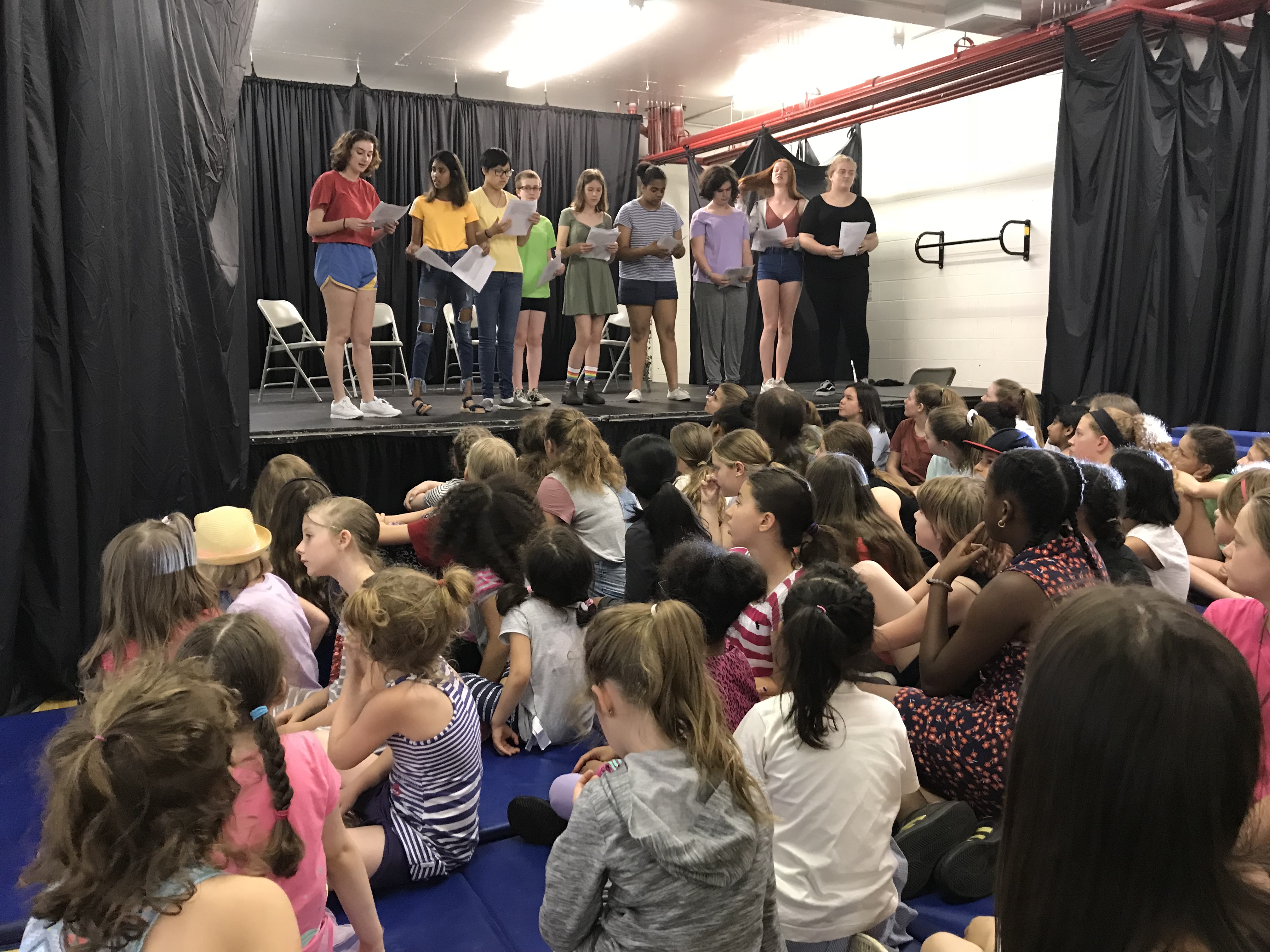 S: “The older girls were doing a presentation about Pride and then after their presentation, we watched a video about the rainbow flag. First a woman was talking and then the man who made the flag talked about it.” 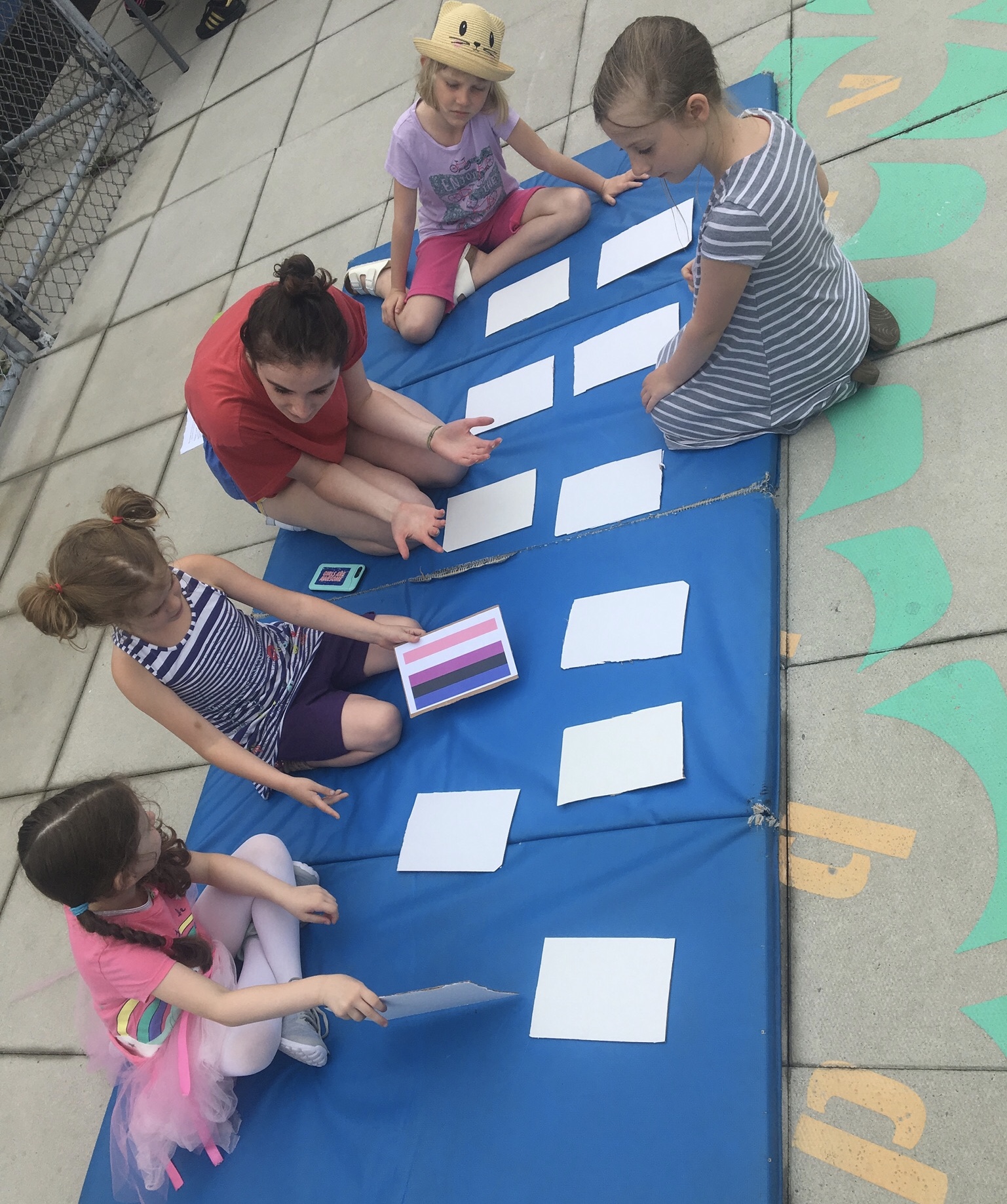 M: “Everybody in the school was doing a festival on the roof to celebrate Pride. We were playing a matching game where we were matching flags of different types of people and Toni was helping us because sometimes we couldn’t figure it out.” 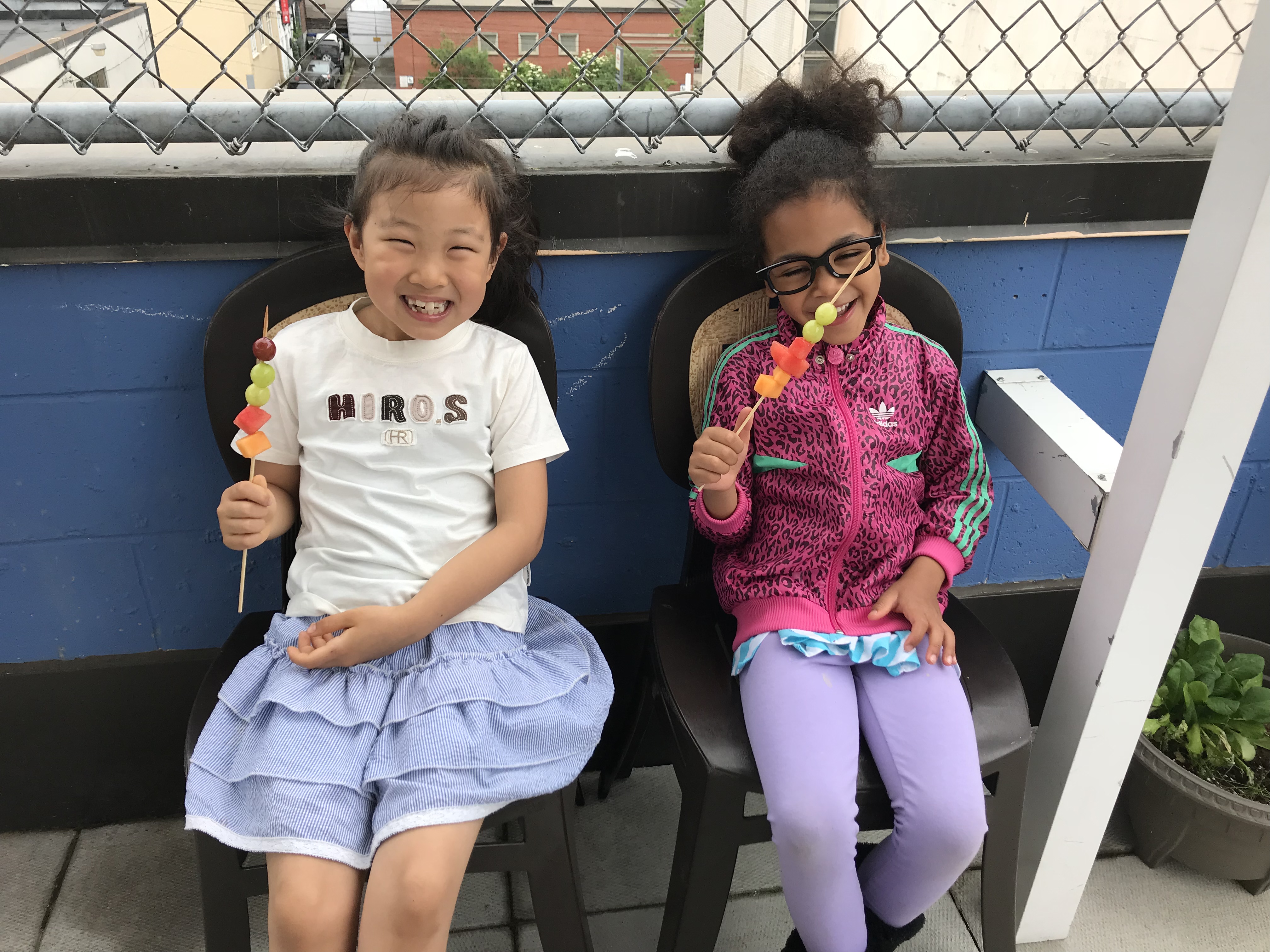 M: “Yesterday, at the Pride All-School, we made our own rainbow fruit kebabs. We put the fruits on it and we had the similar ones. It was good and I thought maybe I could make it very colourful so I tried my best. Z and I were happy and it was good because we were laughing together.” 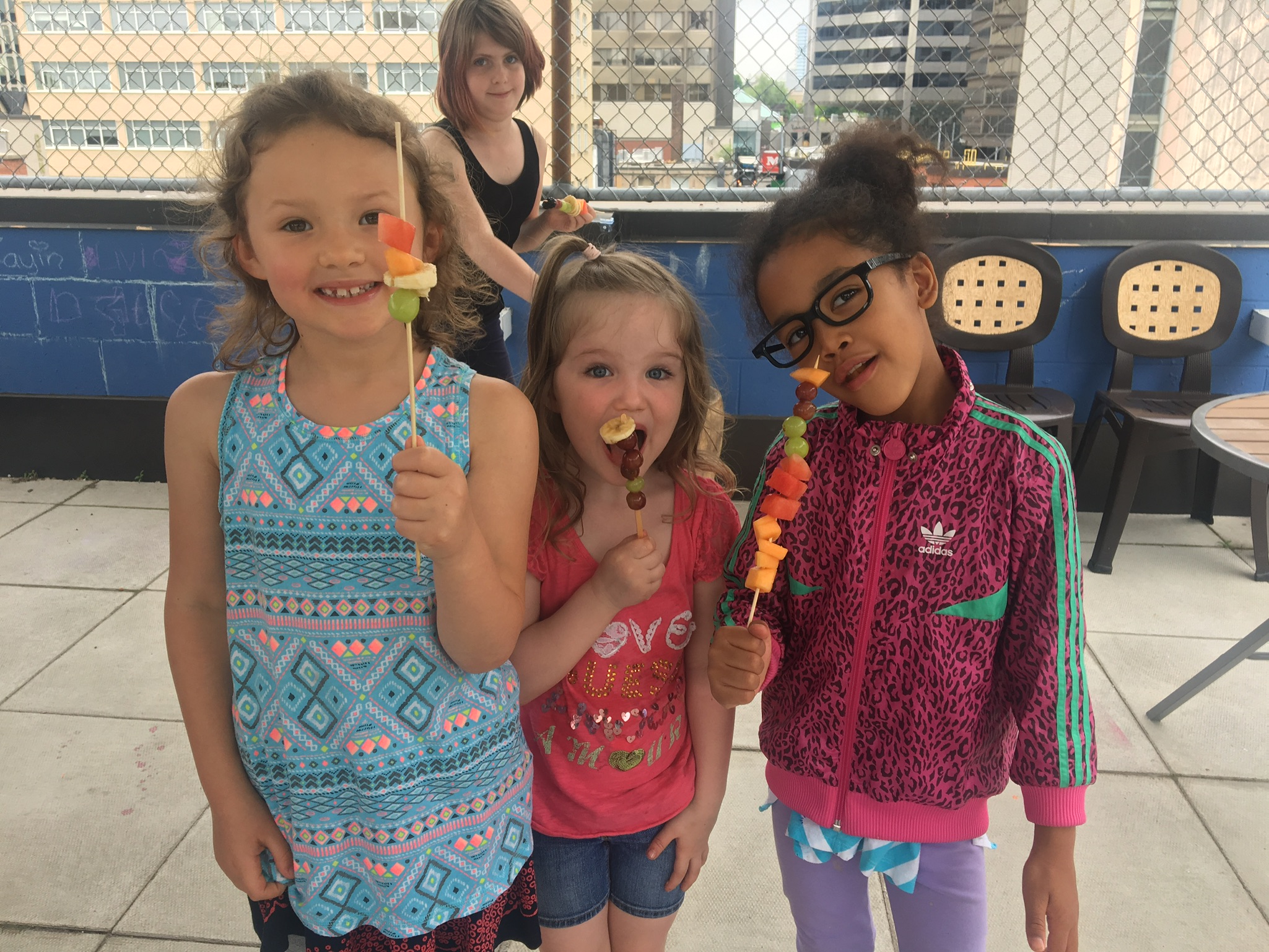 G: “K, P, and Z were having their snack on the roof for the Pride All-School and I love rainbows because every time I celebrate rainbow’s birthday, we get to dress up like a rainbow.” 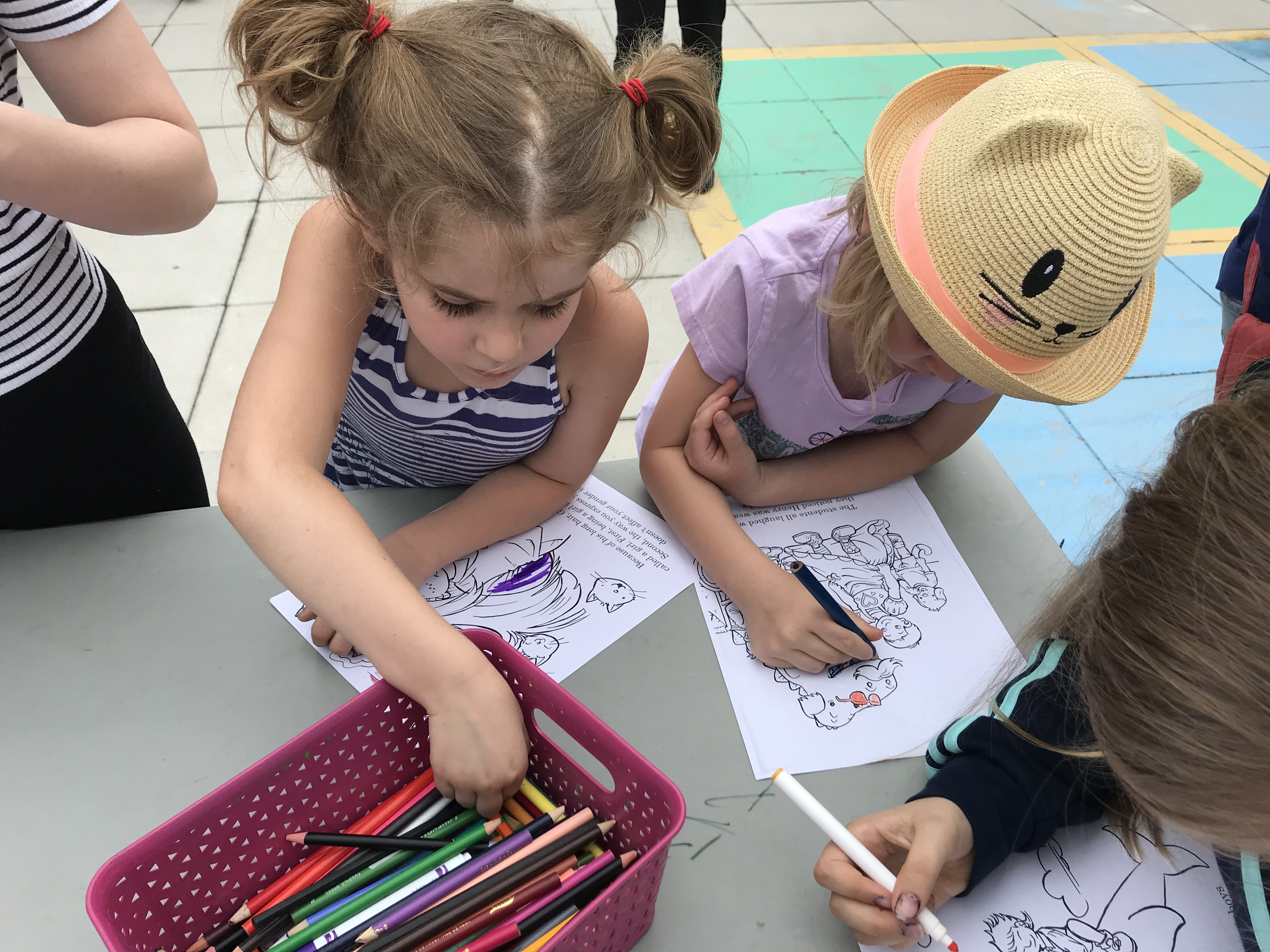 M: “Me and G were colouring together. G chose a monster one and I chose a lady walking from school with cats with laser eyes. We were there colouring for half of the festival because we were very focused on colouring.” 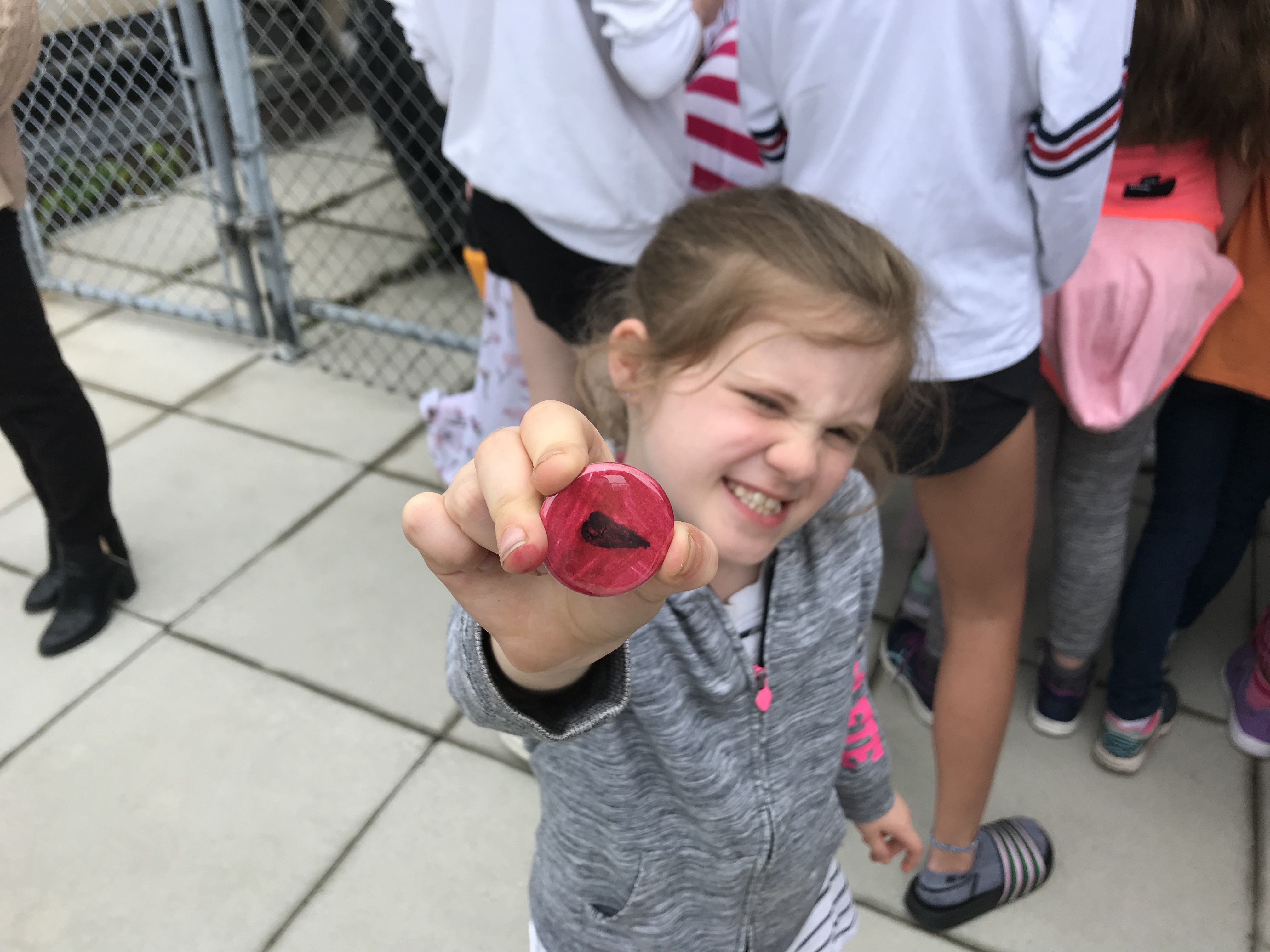 G: “I made my first button all by myself and I showed it to Soteira. I put a heart on it because it was a rainbow birthday and this was my favourite colour of the rainbow.” 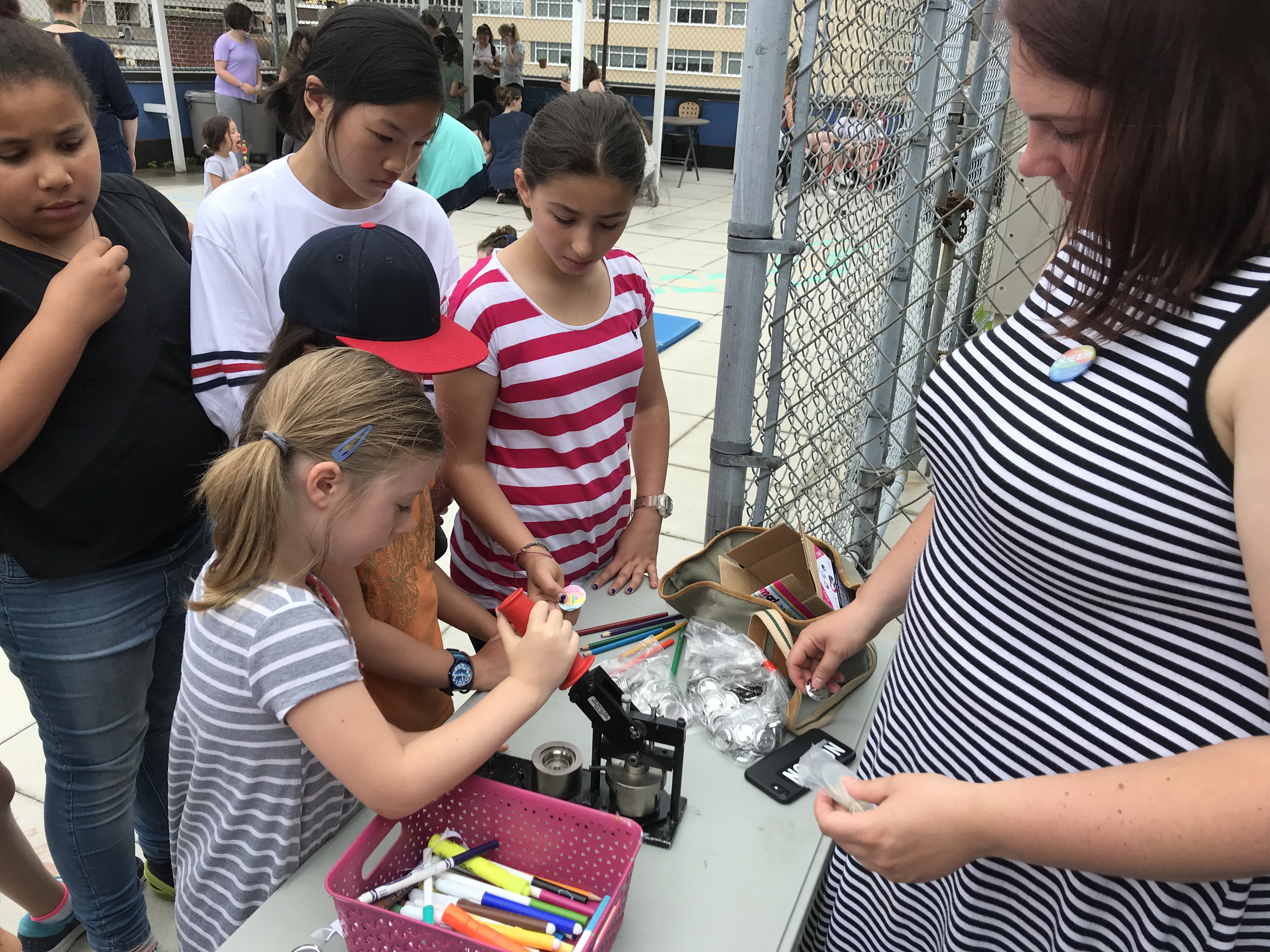 S: “On the roof, there was a button-making station and I got to colour a circle of paper and then we put it into a button machine. I pulled the lever twice and then it came out as a button. My design was also a heart.” 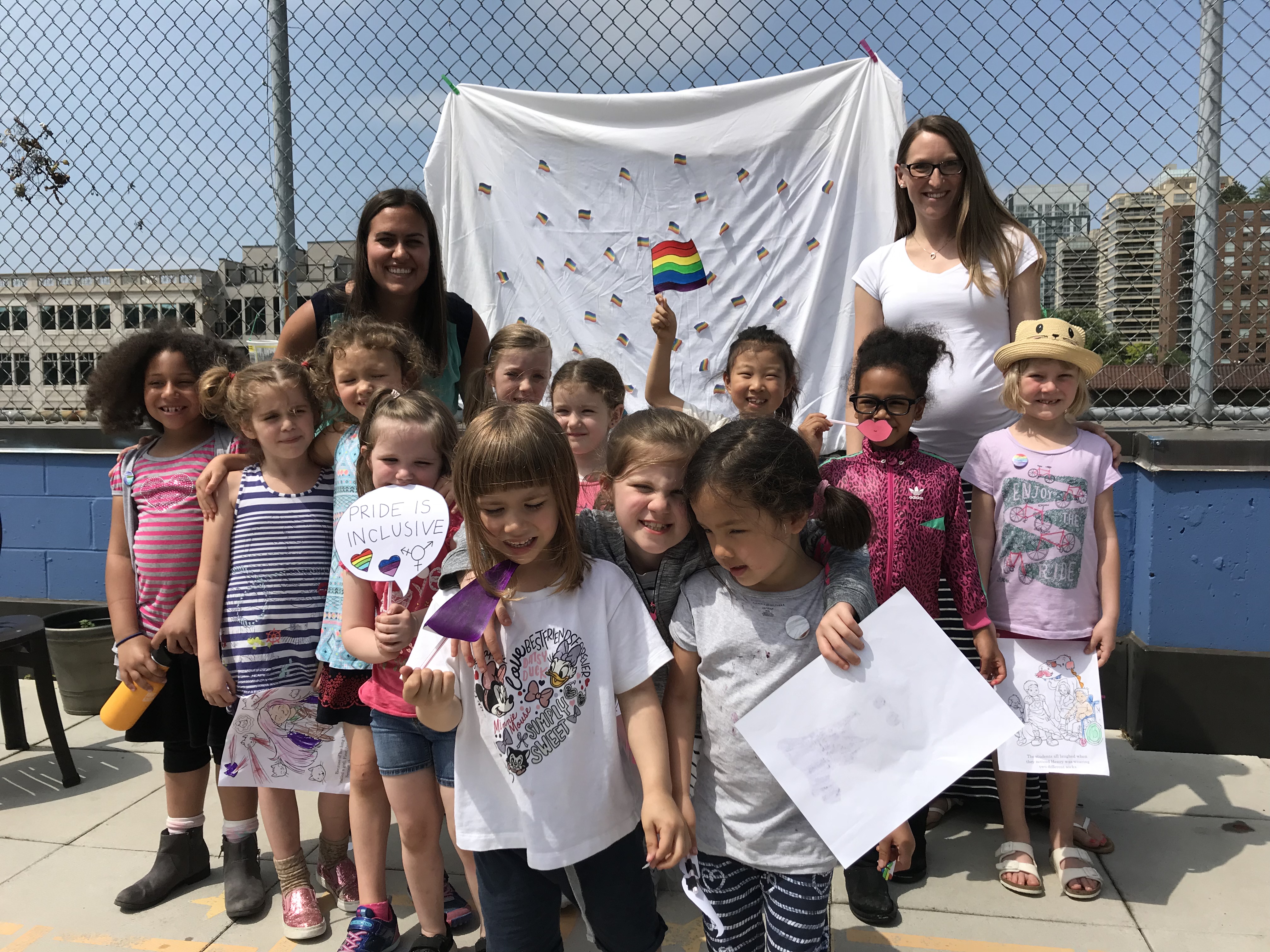 M: “We were taking a class picture and it was very exciting. People had to call us over and we were holding up signs like flags and stuff for the festival. Our teachers were in it too.” 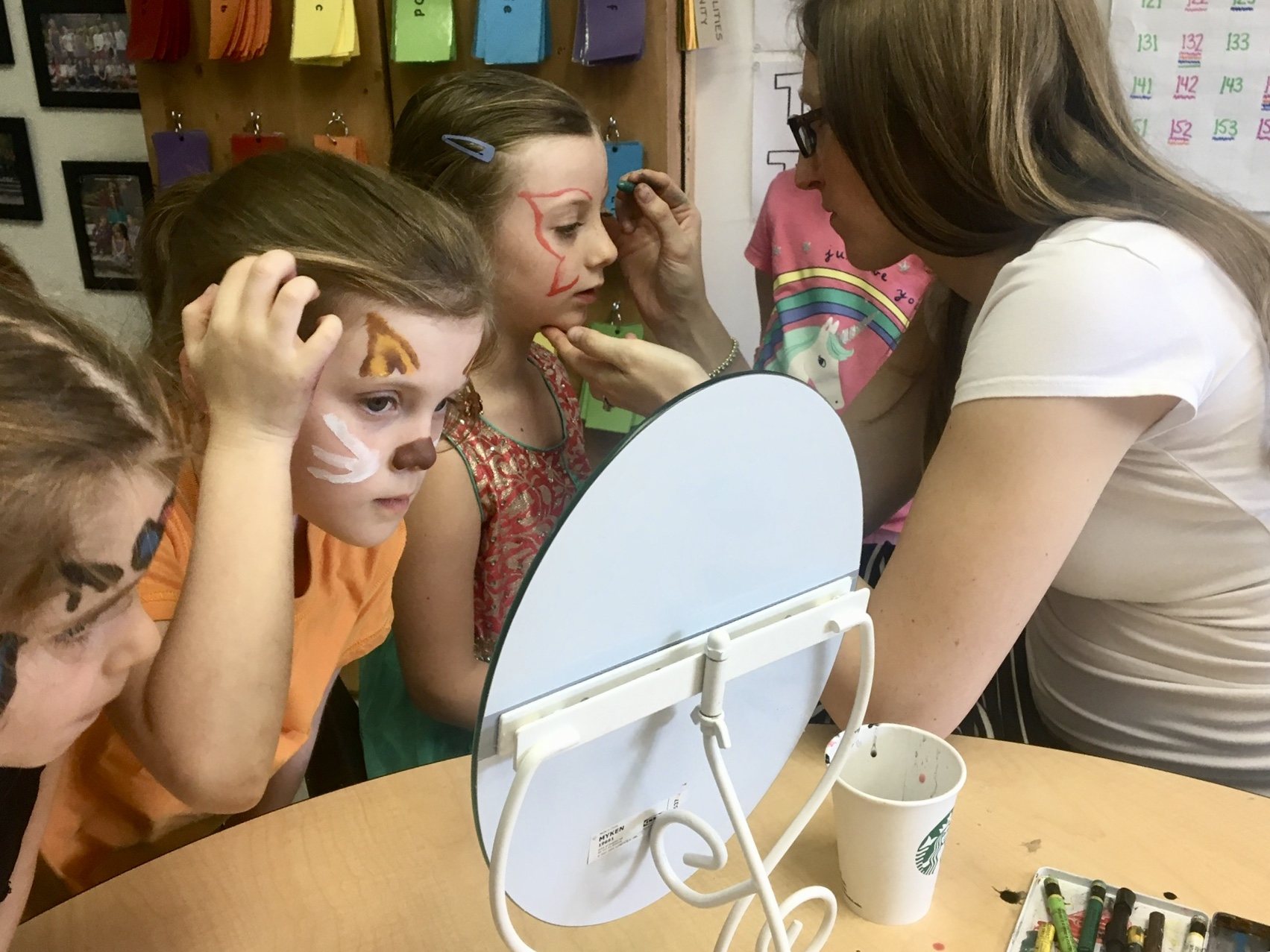 Z: “Soteira put face paint and the face paints belonged to her mother. Everybody got face paint. I was a robin and I got a beak and feathers. I loved my design and I loved them all because they looked amazing!” 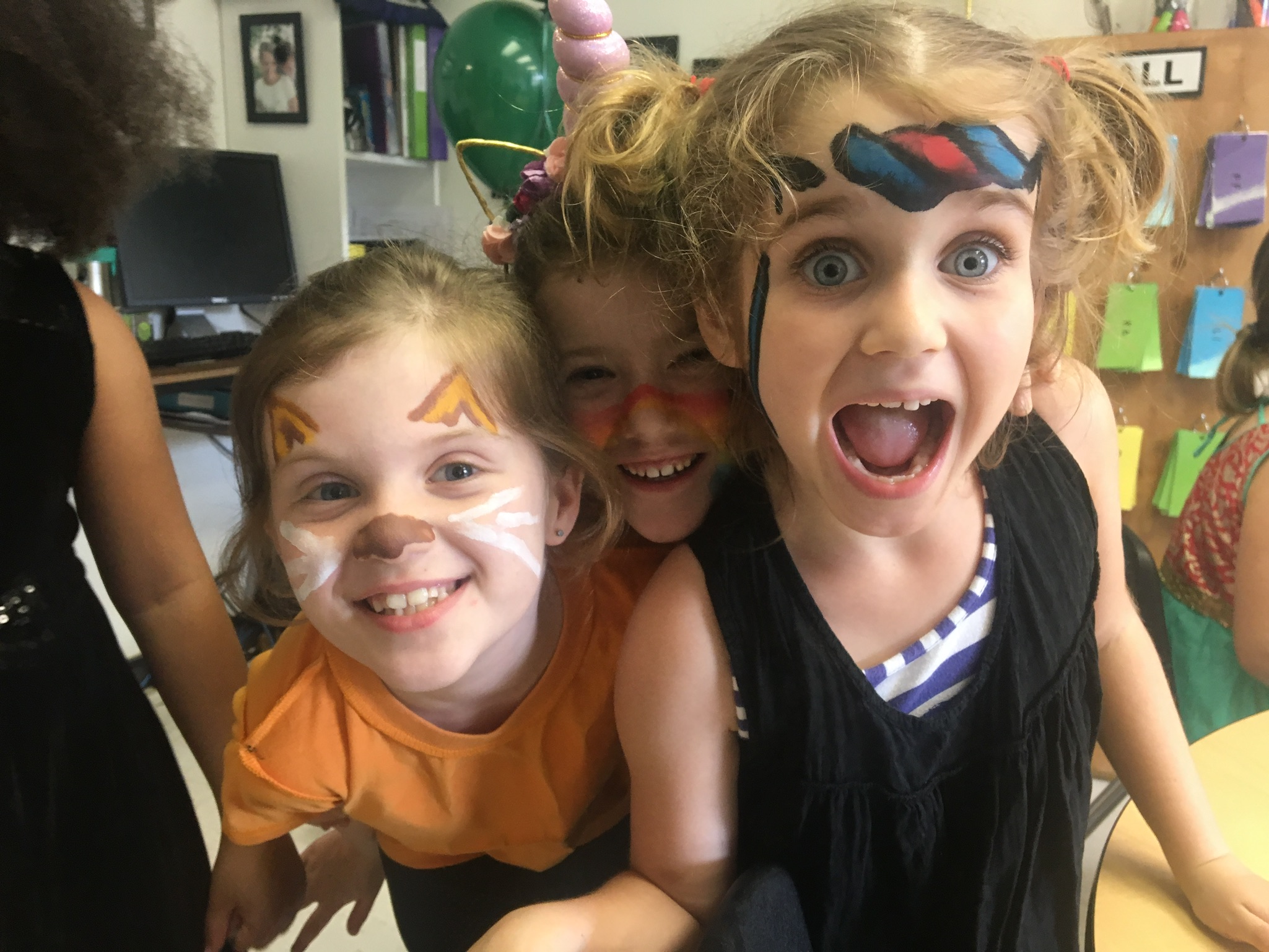 M: “Soteira put face paint on us and I was a pony, K was a unicorn, and G was a fox. We took a picture together. Soteira did a very good job on our face paint.” 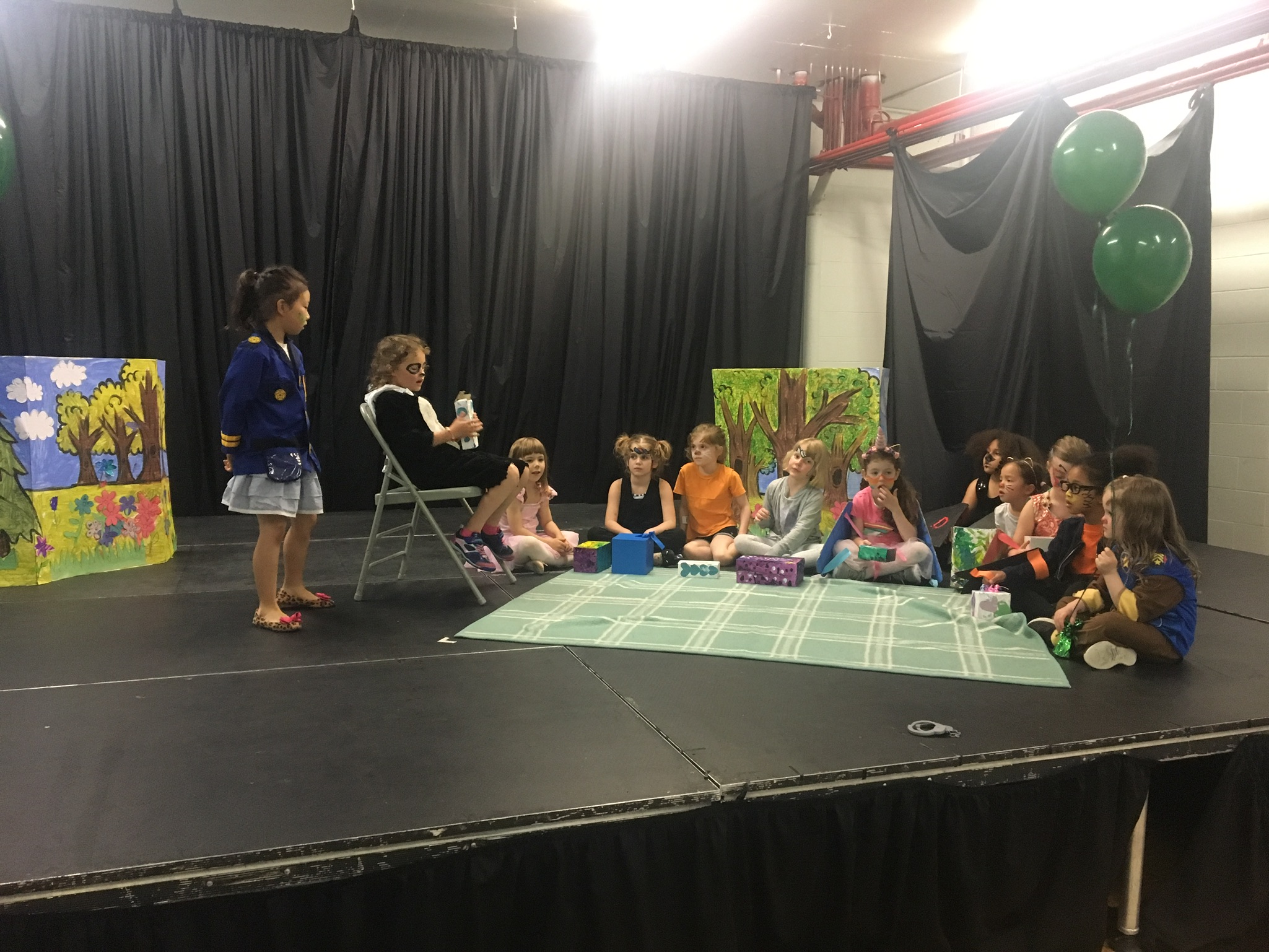 S: “At our rehearsal for Junior Drama Night, M was giving K her bracelet and then P gave her balloons. K used the scissors that were in M’s present to snip the balloons in the real performance.” 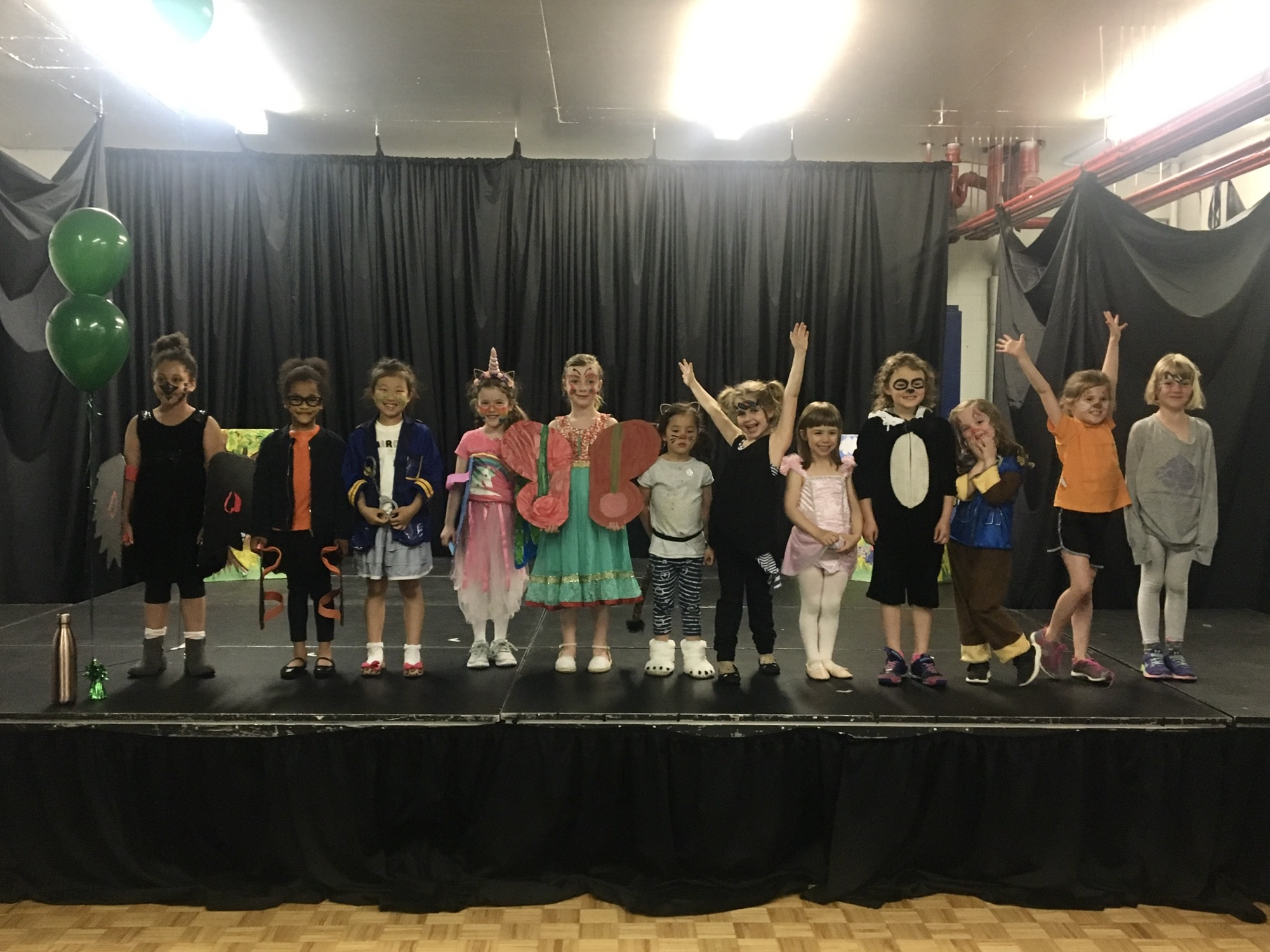 M: “Before the play, we were all together to take a photo of us on the stage. Our play was called Panda’s Party Problem. Here, I was feeling very excited because the play was about to start.” 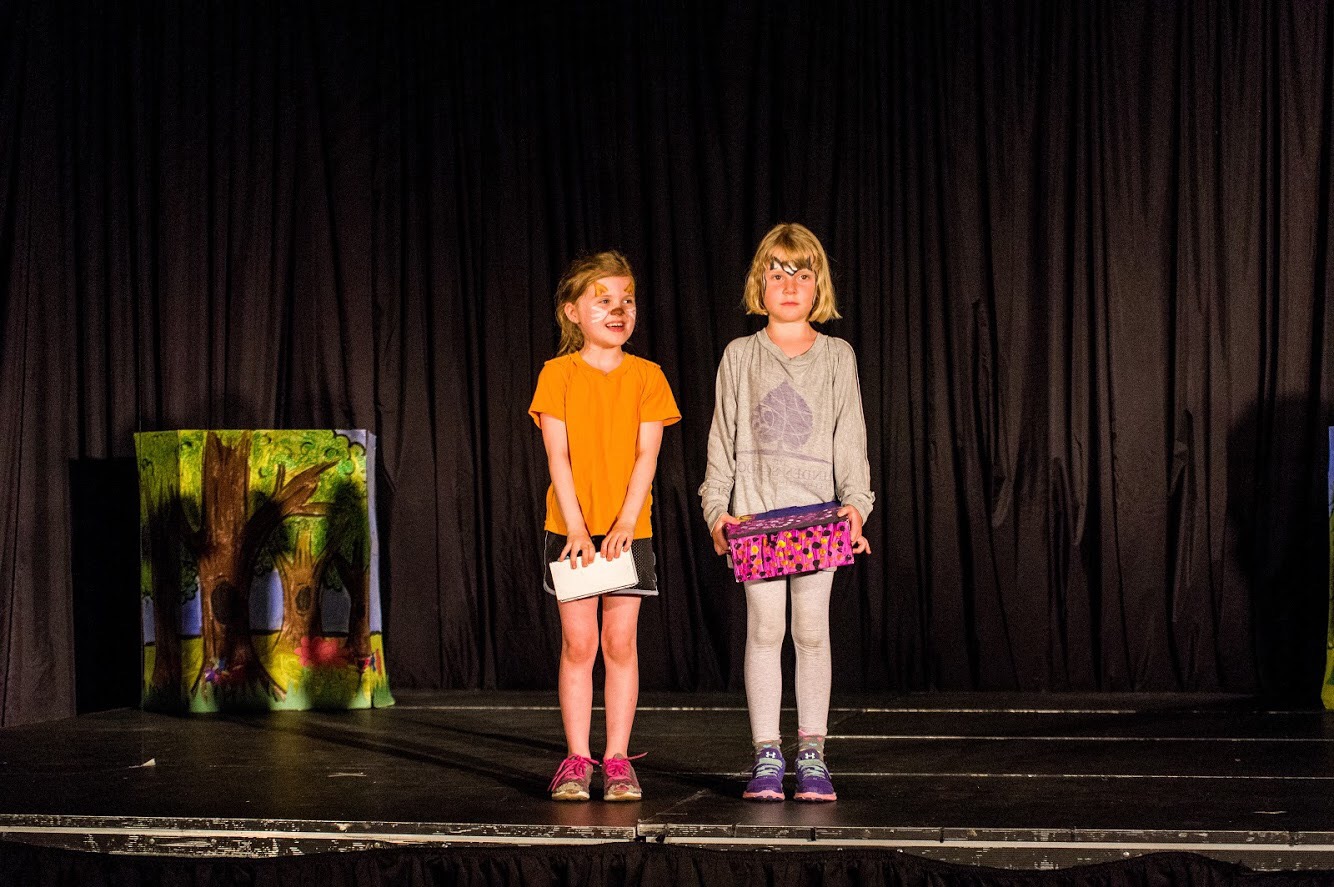 G: “Me and G were presenting the play before it started and then we put down our presents and went to our hiding spot. I never presented something before so it was my lucky day to do it with G. I was so excited to do it and G was excited too.” 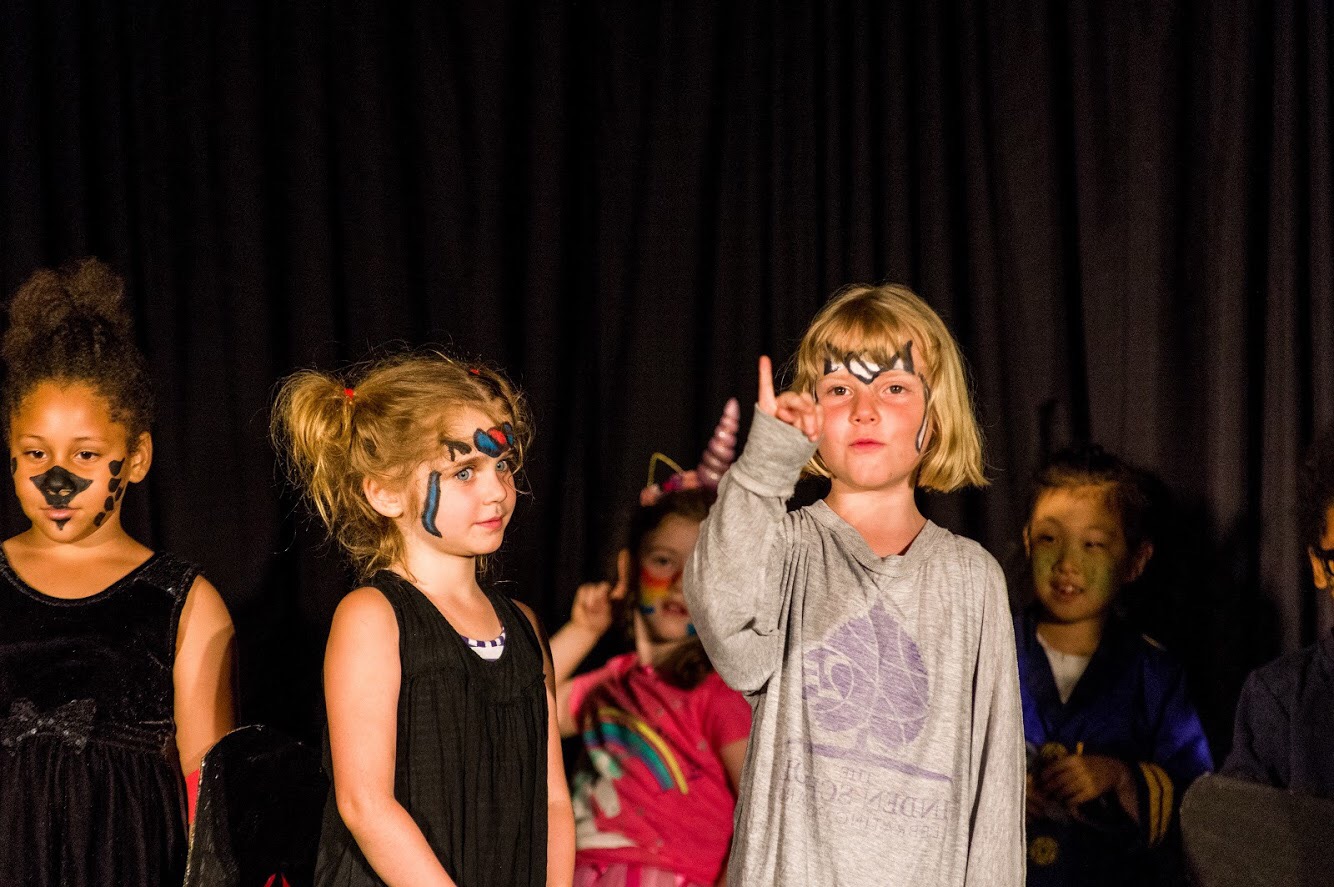 M: “During the play, G was counting down the game of tag and saying ‘3 … 2 … 1’. I was kind of nervous because it was the start of the play but then I got used to it and then I felt comfortable.” 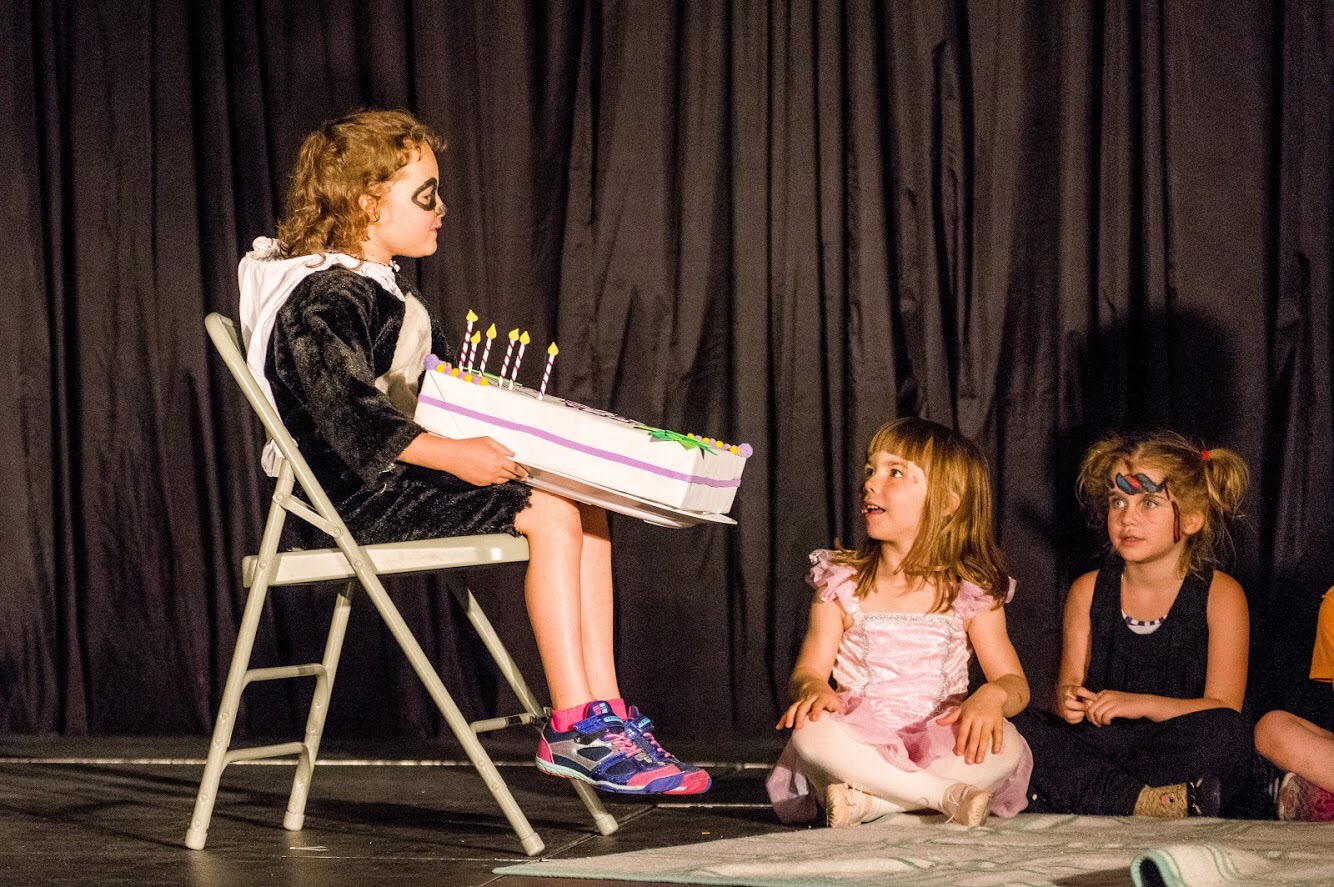 K: “In the play, they sang ‘Happy Birthday’ to me and I was holding a birthday cake that A the Ballerina gave me. I liked the cake because it has bamboo sprinkled leaves on it.” 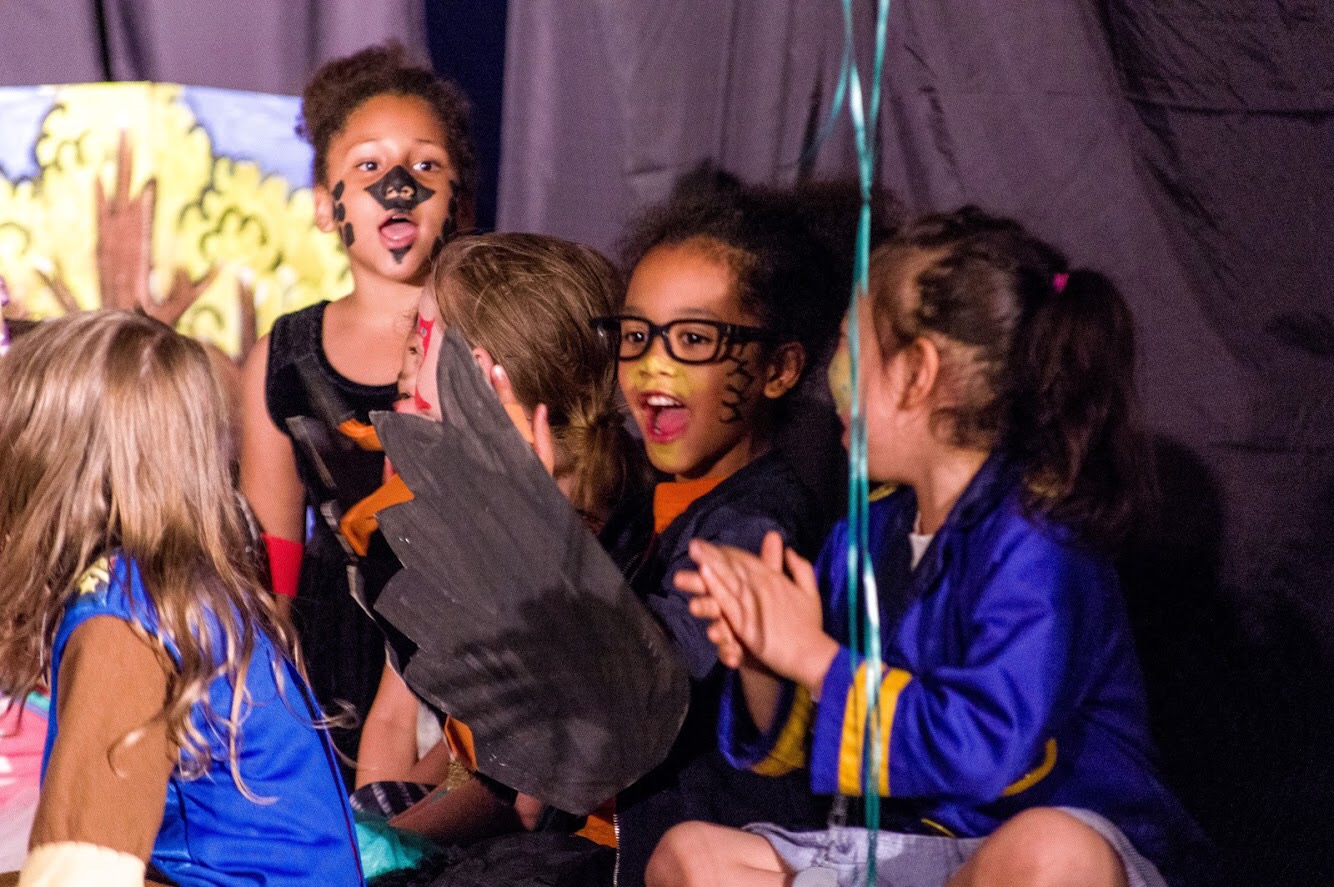 Z: “This is when we were singing ‘Happy Birthday’ to Panda. I was wearing wings that we made. Savannah found cardboard and then Soteira cut them out and then I painted them black. Then we attached hooks to put my arms through. It was a little bit hard to clap with my wings and one of my wings broke but I just held on.” 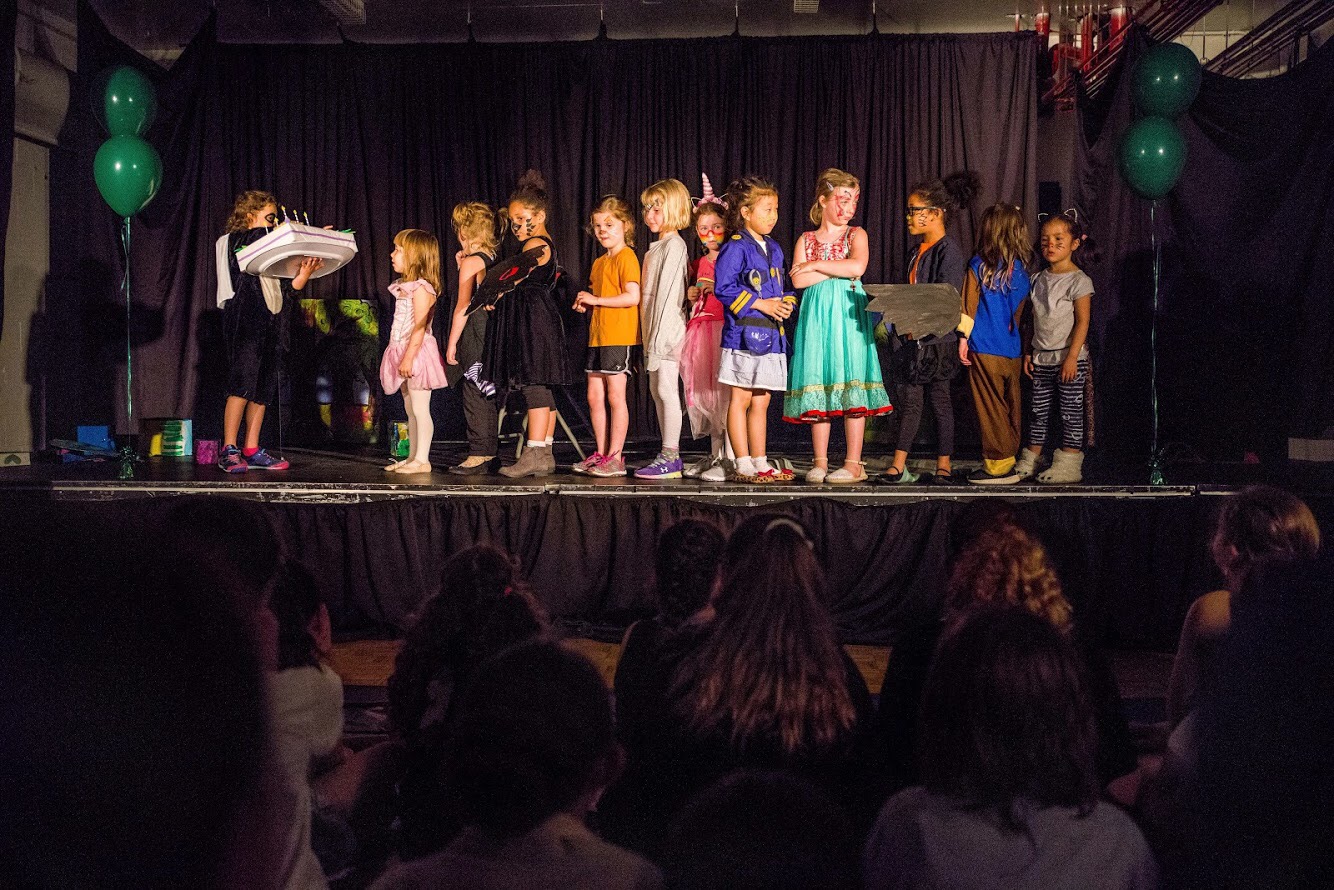 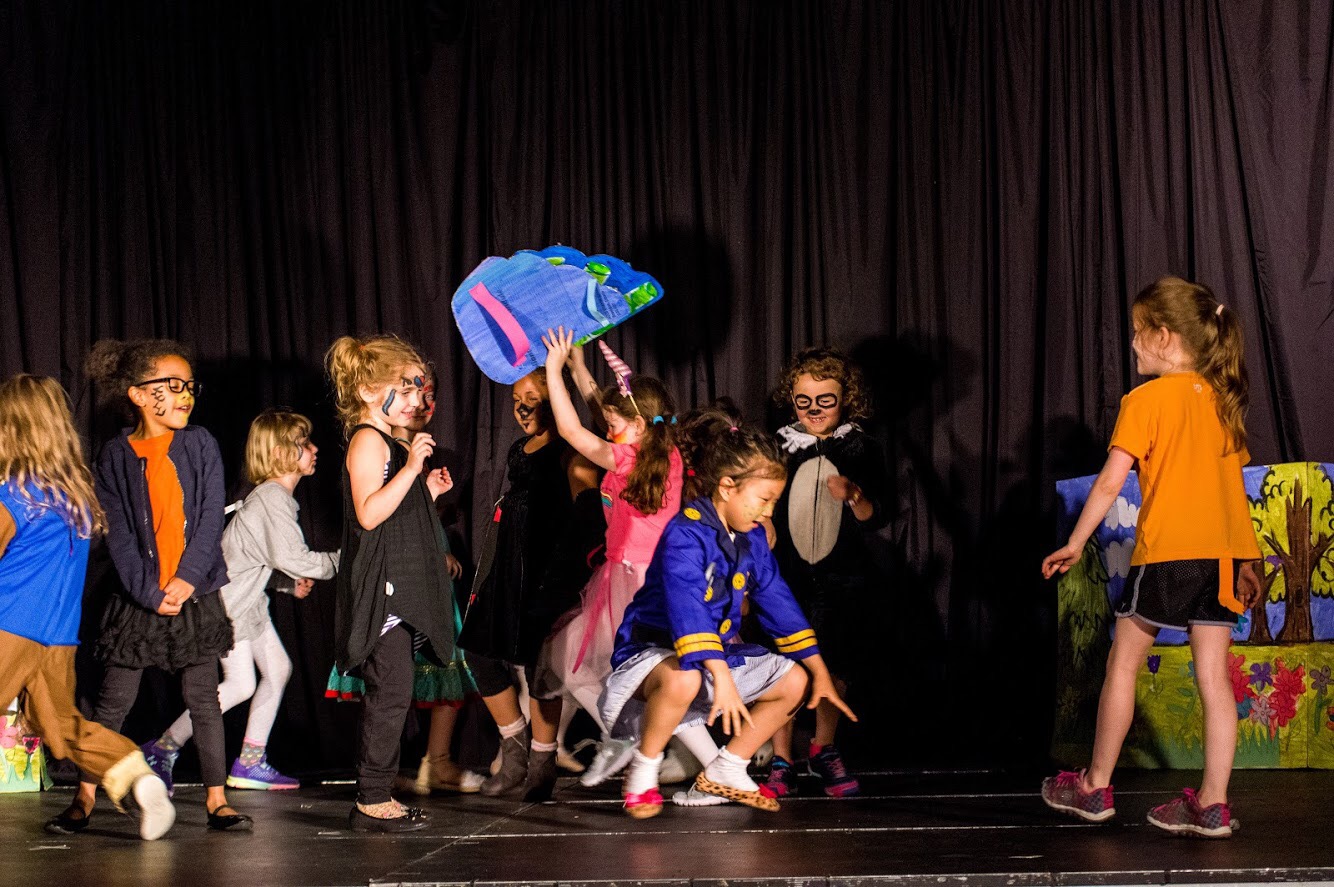 M: “I was ‘it’ in the freeze tag and Raven said something about me being fast. The big characters all made a mistake when they thought that the small characters couldn’t do anything. We showed that we could do the same thing as the big characters. I tried my best to jump really high and I finally caught somebody.” 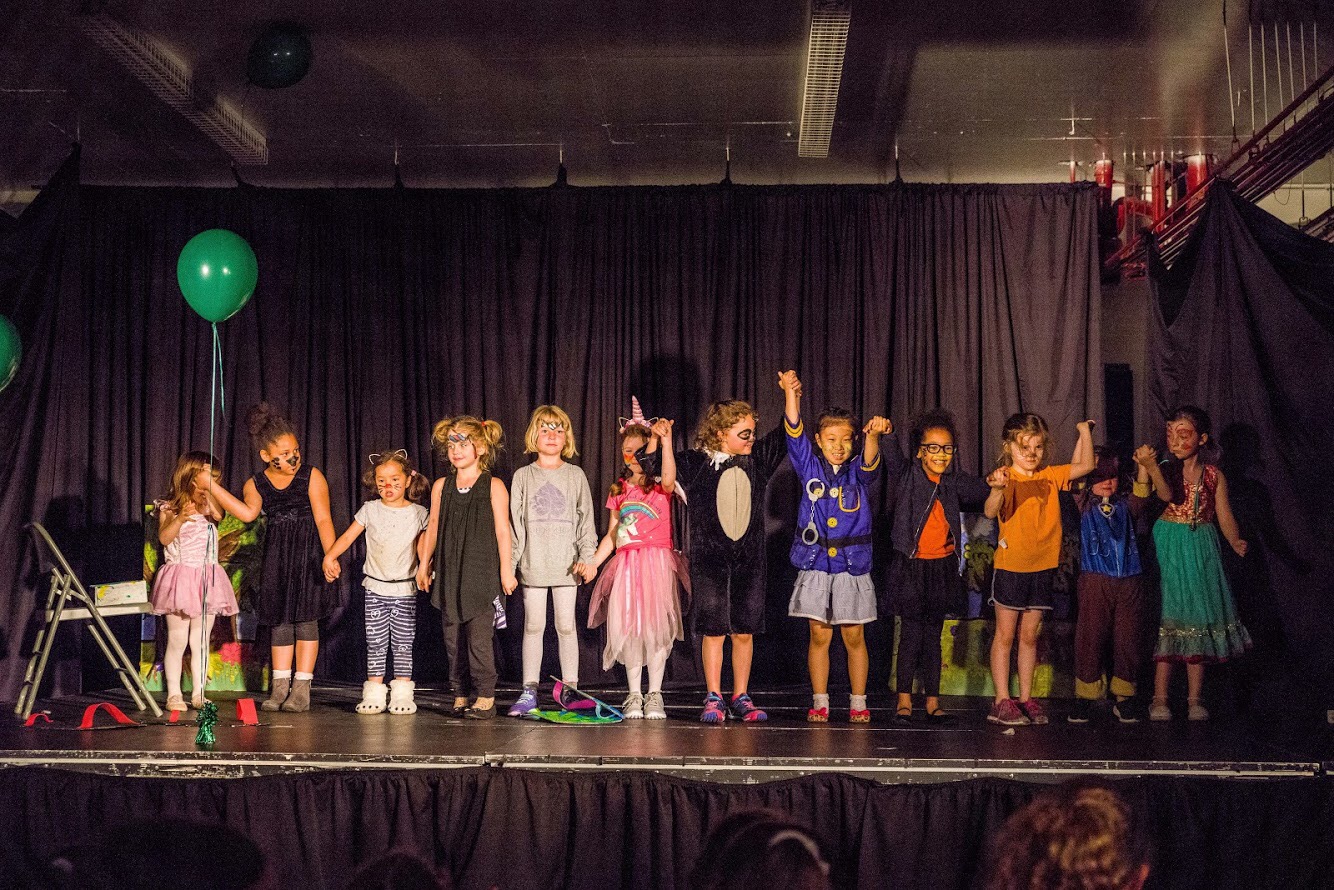 K: “At the end of the show, we bowed. I was feeling happy because the play just ended and we did a great job. We bowed three times.”