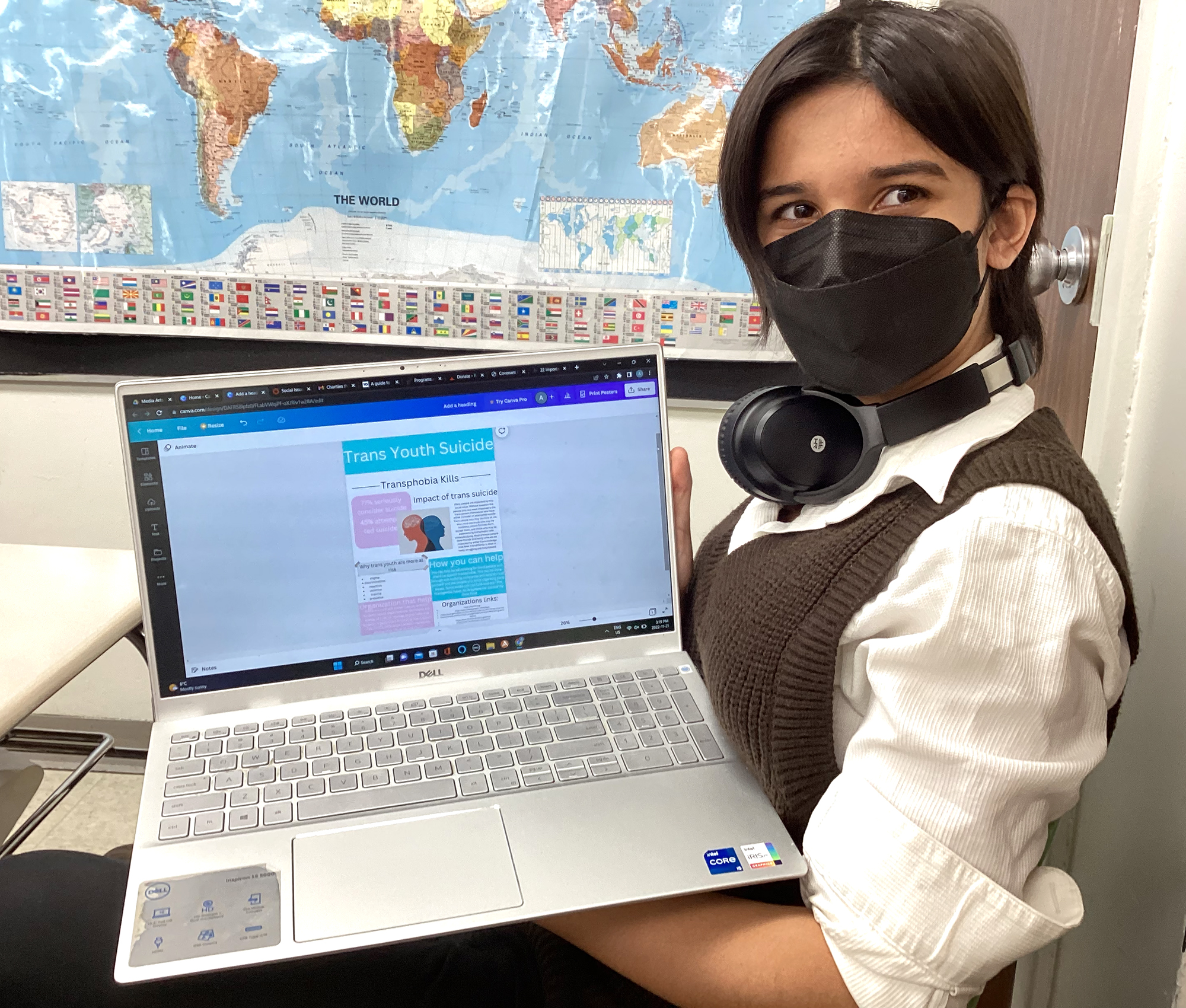 Grade 9 student Azadeh was moved by the vulnerability of trans youth to suicide ideation and suicide attempts due to transphobia and bullying.

Through the Youth in Philanthropy Project, Linden’s Grade 9s are benefiting from a unique opportunity to learn about solutions to social challenges that affect their own communities.

Guided by English teacher Cassie Parkin, students select an issue that they care about, and an organization in their community that is addressing the issue effectively. We caught up with some of the Grade 9s as they were carrying out research and creating infographics.

They did not shy away from tough issues! Zivia, Fadumo, “M”, Sadie, and Lilah chose to investigate organizations that help victims of domestic violence.

“We chose the Elizabeth Fry Society because it is near my home,” said Zivia, who is working with “M” and Fadumo. “I was surprised by the prevalence. In 2019, 24,300 women suffered from domestic violence. And during COVID, many were trapped with their abusers.”

The organization helps in multiple ways in both the short and long term. “They provide emergency services to get women out of dangerous situations, and then they provide housing,” said Zivia. “They also offer ongoing care such as counseling, therapy, and treatment for PTSD.”

Lilah chose Nellie’s because of a family member’s volunteer role on their board. She noted their many services that range from offering self-defence classes to helping victims understand healthy relationships.

Sadie selected the YWCA Woodlawn because of Linden’s long-standing relationship; each year, Linden students help them prepare their garden for the winter. “They are a ‘first stop’,” she explained. “they have 72 rooms which they rent at low or no cost, depending on the person’s means. They help people find employment and permanent homes.”

Zakiyah, Billie, and Sophie are championing the CNIB, which addresses visual accessibility in Canada. “I was aware of their work with service dogs,” said Zakiyah, “but they do so much more. They teach people to read in Braille, and they help them find work and live independently – and even offer painting classes.”  Sophie was surprised to learn that almost half of the instances of visual impairment in Canada could have been prevented with earlier diagnosis and treatment.

Etta, Fiona, and Patrizia explored period poverty by championing The Period Purse. “We are aware of the shame and stigma associated with menstruation,” said Patrizia. “For us, it’s an annoying issue, but this can actually be dangerous. For example, sometimes people don’t know about menstruation before it happens to them, because their families are too embarrassed to discuss it.“

“For those who experience poverty, especially those who are unhoused, the cost of period products is prohibitive,” said Fiona.

“Sometimes they resort to using dangerous or unhygienic alternatives such as sponges, leaves, or rags, resulting in infections and other health issues,” added Etta.

Fiona noted that The Period Purse holds donation drives for period products, educates people, and has programming for groups with unique needs such as trans people.

Some students selected organizations in their community that they were curious about. Charlotte and Ella chose to learn about challenges faced by immigrants through their exploration of the Riverdale Immigrant Women’s Centre.

Azadeh chose Friends of Ruby because “it was the only organization I could find that supports queer and trans youth who are thinking about suicide. The sheer numbers are shocking: because of transphobia and bullying, 77% of trans youth have considered suicide, and 45% have attempted it,” Azadeh said. “Friends of Ruby provides mental health resources, drop-in programs, housing, and other services for all members of the 2SLGBTQIA+ community.  They want everyone to feel valued and empowered.”

Students are looking forward to the next step: visiting their organizations in person. Their research will form the basis of culminating presentations to the school. Grade 12 students will vote for the most compelling, and the winning individual or group will receive $5,000 to donate to their organization. 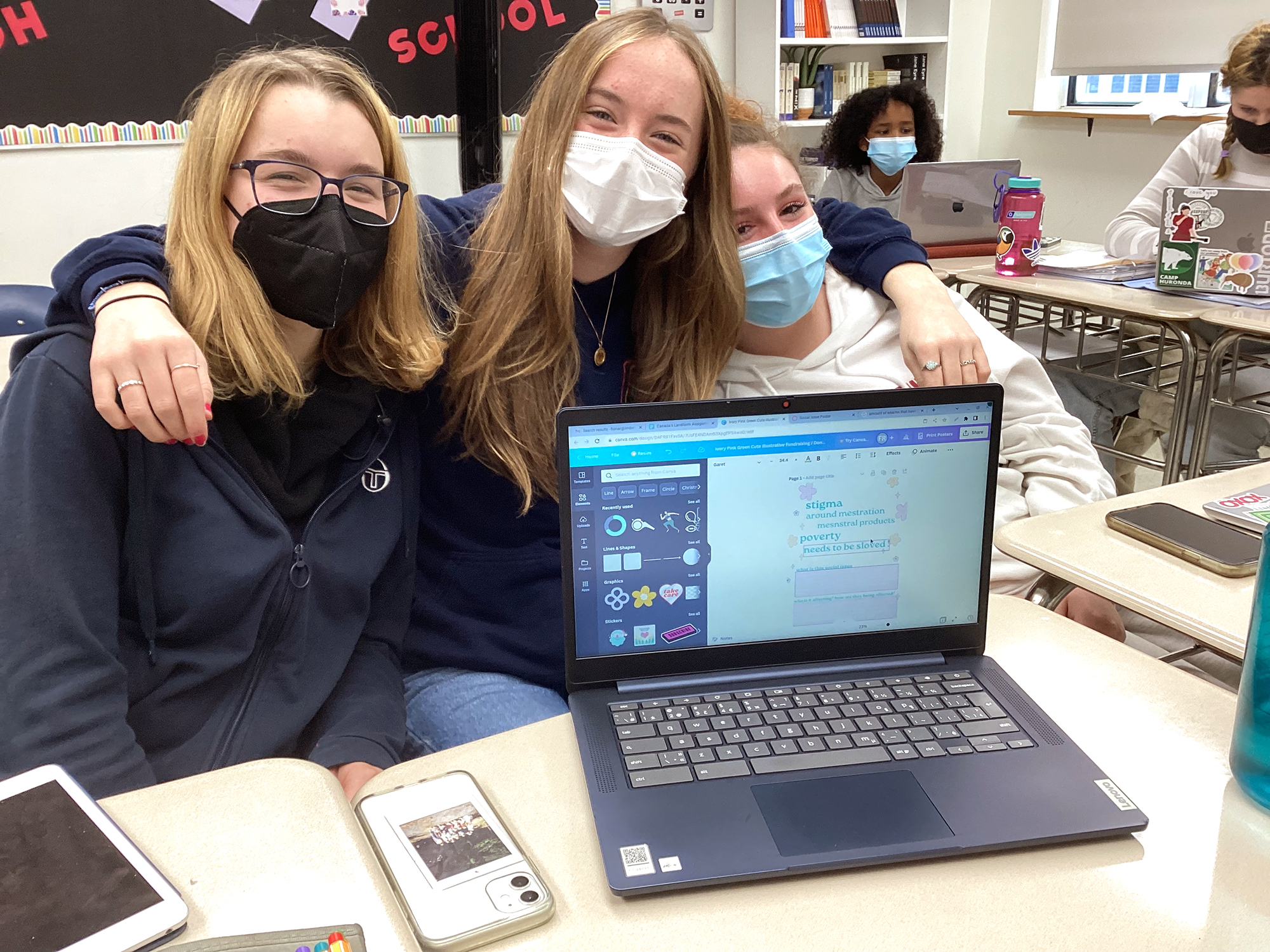 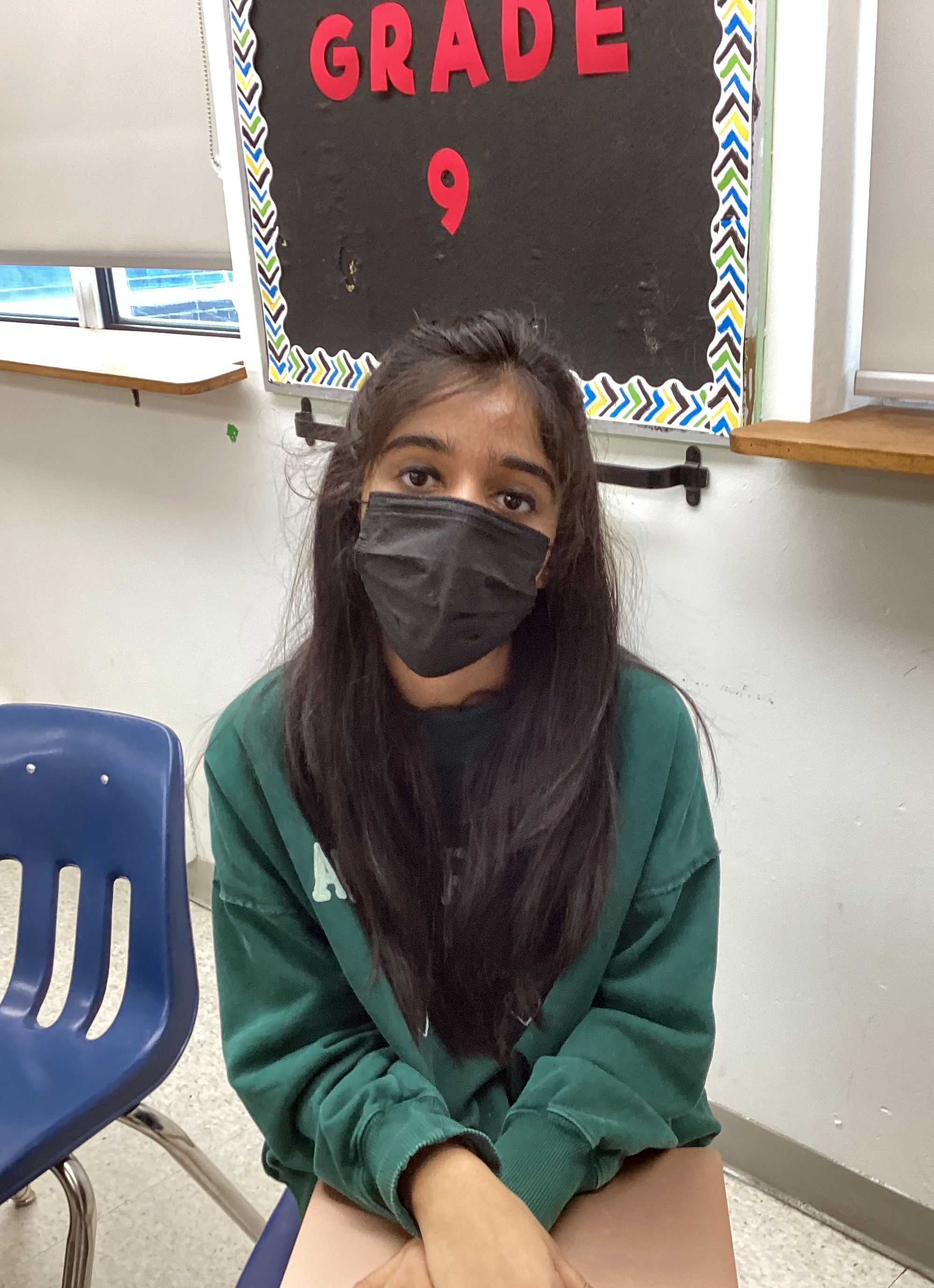 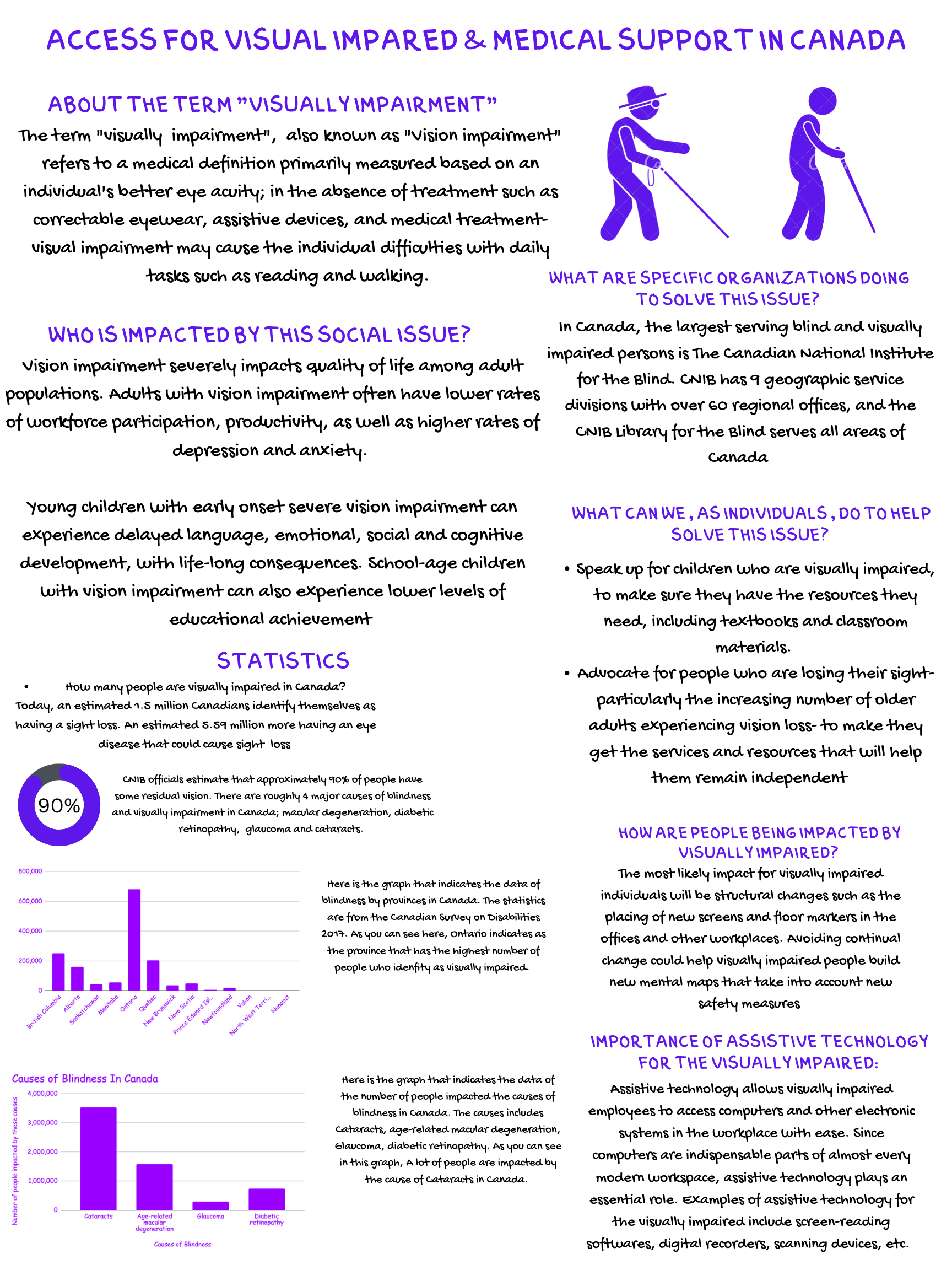 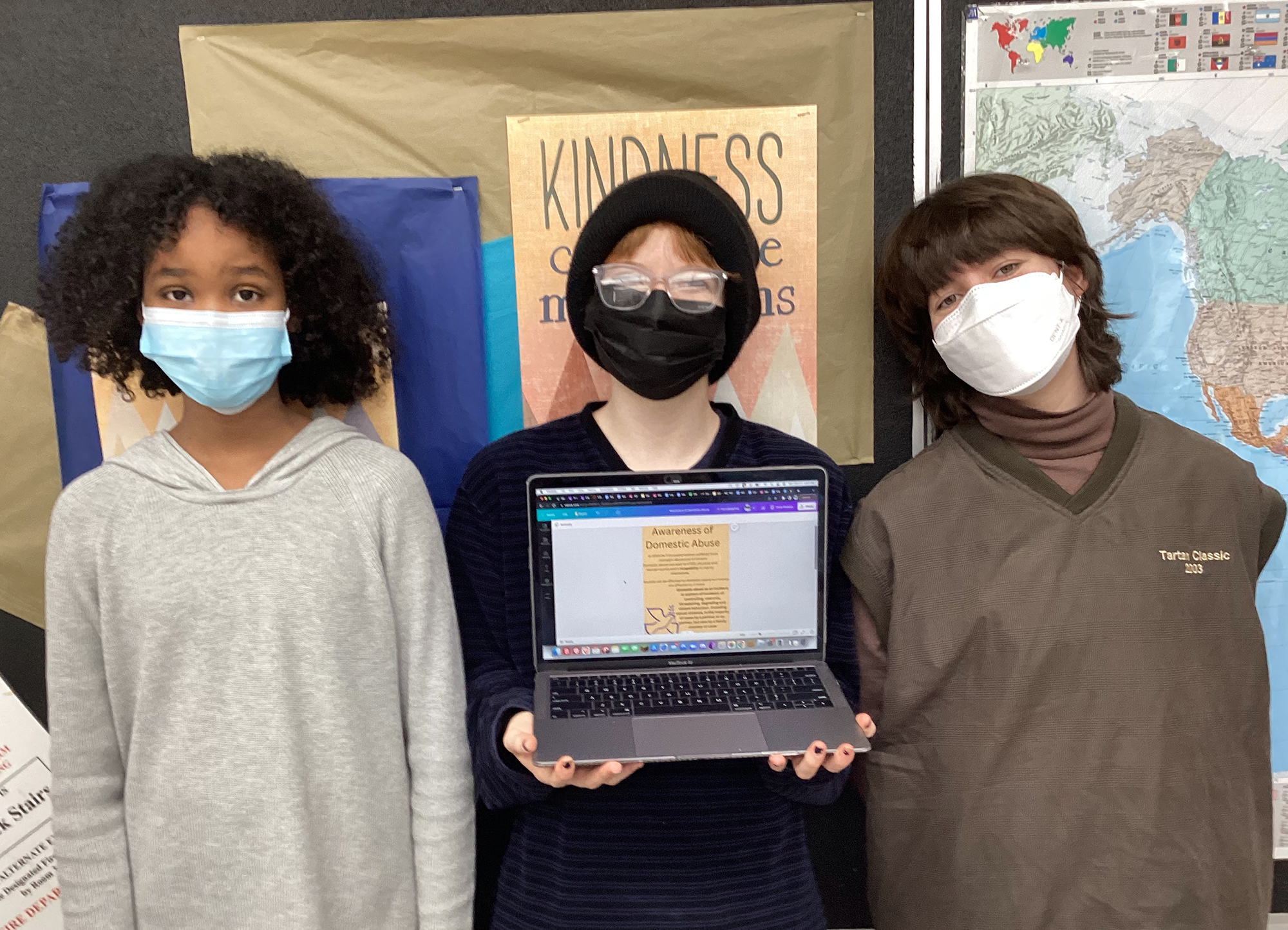 Students learned about the immediate and long-term impacts of domestic violence. 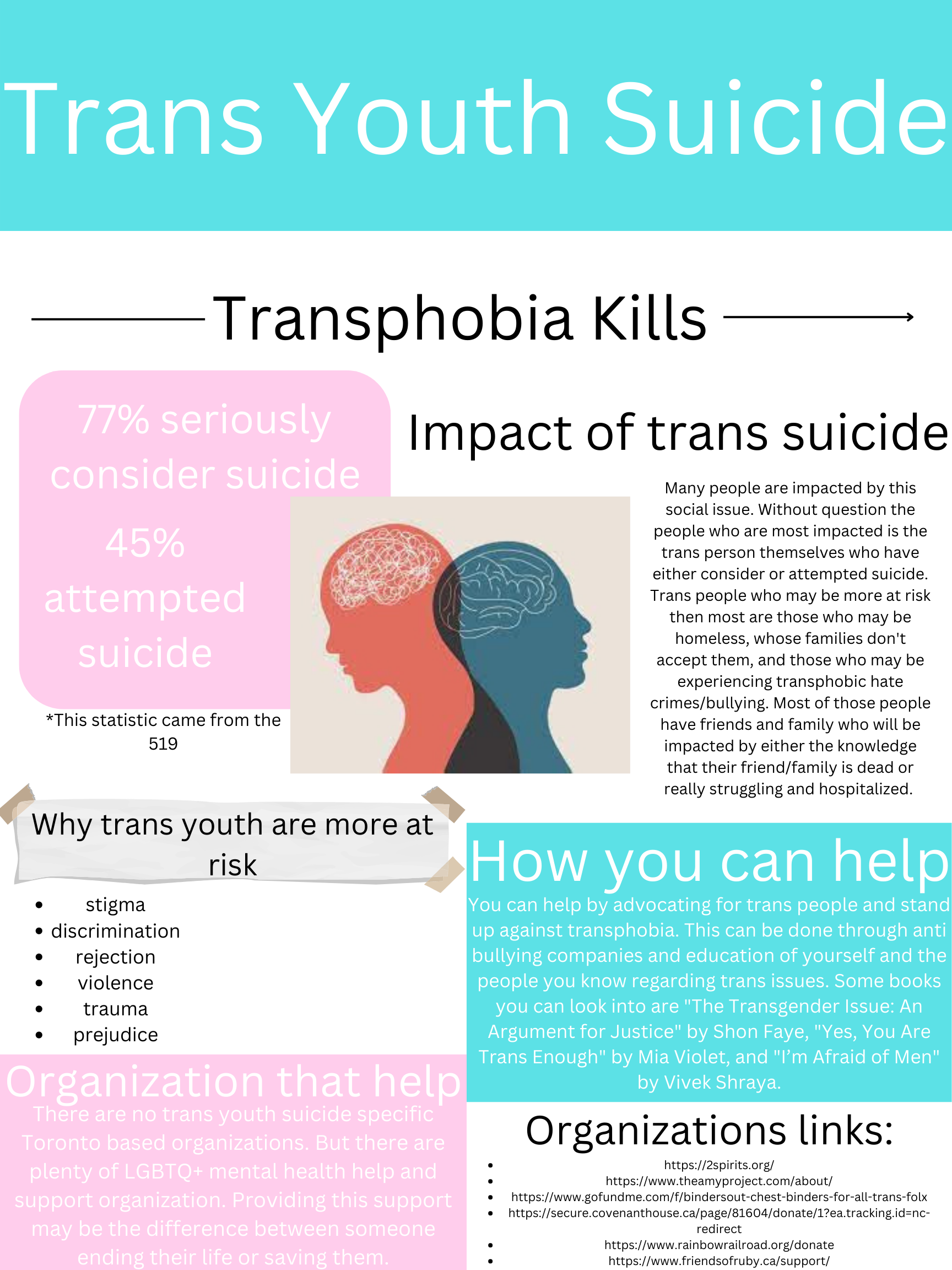 Azadeh learned about transphobia and bullying. 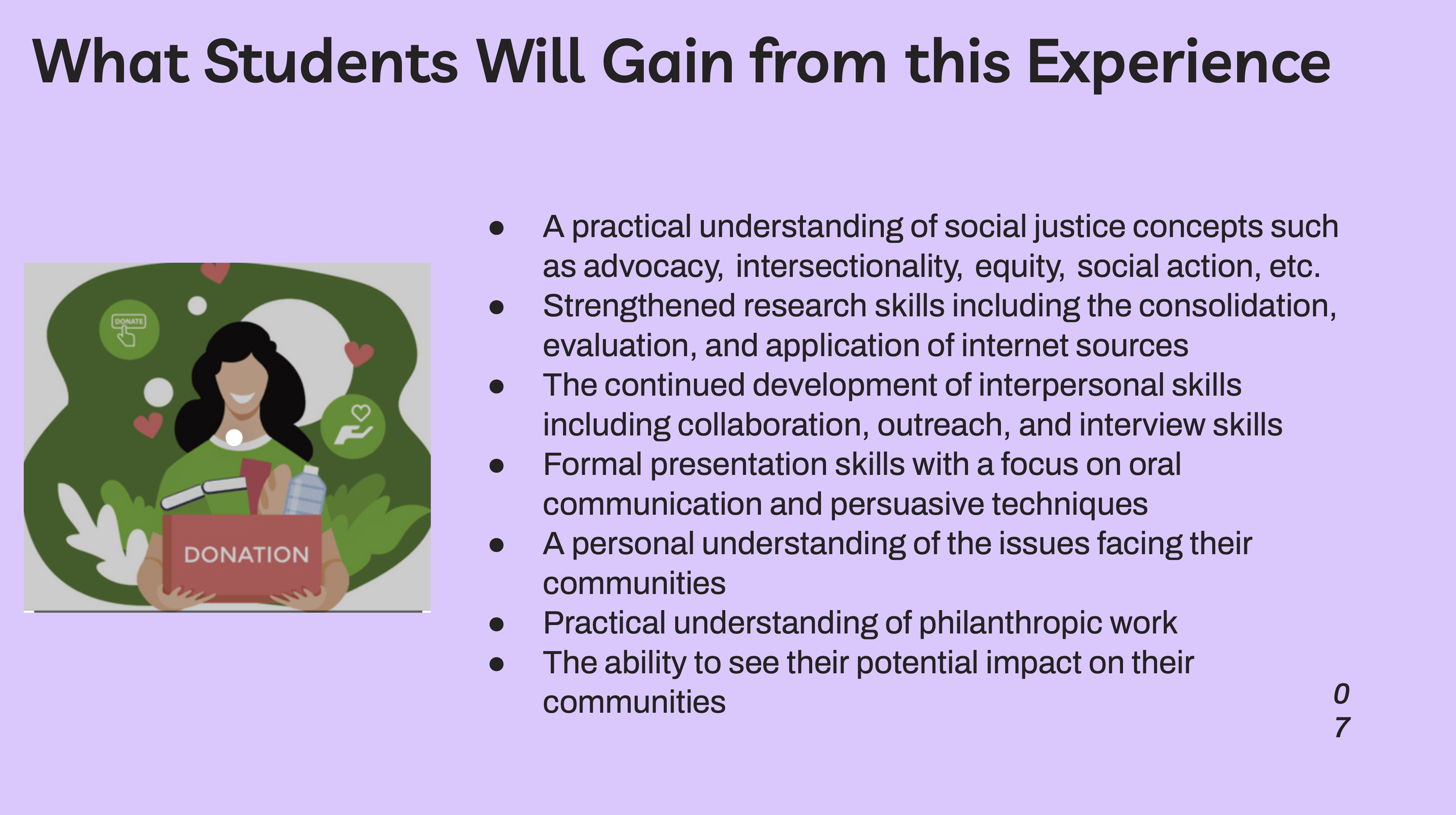