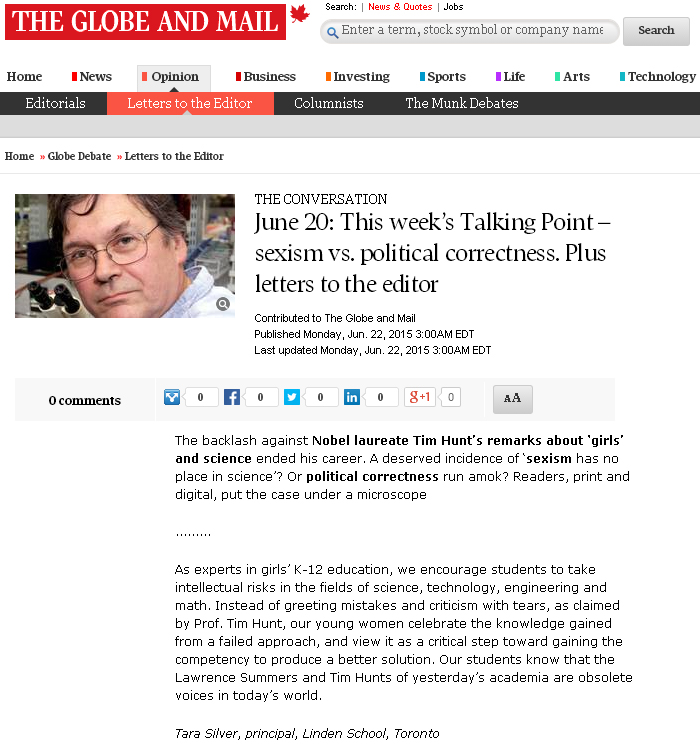 The Linden School responded to Tim Hunt's statements about girls and science by sending a brief letter to The Globe and Mail (screenshot above). A full version of this letter is posted below for our community members.

The world needs more women scientists. Governments and corporations know this, and yet somehow, Nobel Prize winner, Tim Hunt, does not.  Sadly, he echoes former Harvard University President Lawrence Summers who once suggested that men were naturally better than women at science and math.

As experts in girls’ K-12 education, we at The Linden School know that these decisions take place early amongst girls – sometimes as early as grade one – and are directly influenced by the socialization and messaging they receive at home, at school, and through the media. We frequently hear mothers say “my daughter takes after me; she’s also not good at math.” And we often admit students from other schools who’ve given up trying because they were told girls are not good in science, technology, engineering and math (STEM) subjects.

Our experience with such attitudes is underscored by a 2013 Huffington post article by Alica Chang, Bridging the Gender Gap: Encouraging Girls in STEM Starts at Home, where she argues,

“While the majority of studies show no differences in STEM ability [among boys and girls], a large divide in perceived competence starts as early as age five… If girls do not expect to succeed in math and other STEM domains as early as elementary school, it is not surprising that by college, their interests have shifted to fields in which they feel more confident.”

These are the very perceptions The Linden School aims to obliterate within its four walls and beyond. Contrary to what Lawrence Summers believed, we think it’s important to encourage girls to take intellectual risks and believe in their innate abilities to excel in STEM fields as early as Grade 1, when each girl is expected to conduct and present her science and technology experiment at the school’s annual science fair. Instead of greeting mistakes and criticism with tears, as claimed by Tim Hunt, our young women celebrate the knowledge gained from a failed approach or hypothesis, and view it as a critical step towards gaining the competency necessary to produce a better solution.

Our graduates are ever more opting for STEM fields at university and beyond. This is because they already know that the Lawrence Summers and Tim Hunts of yesterday’s academia are obsolete voices in today’s world where rapid innovation and technological advances require more confident women in STEM fields.