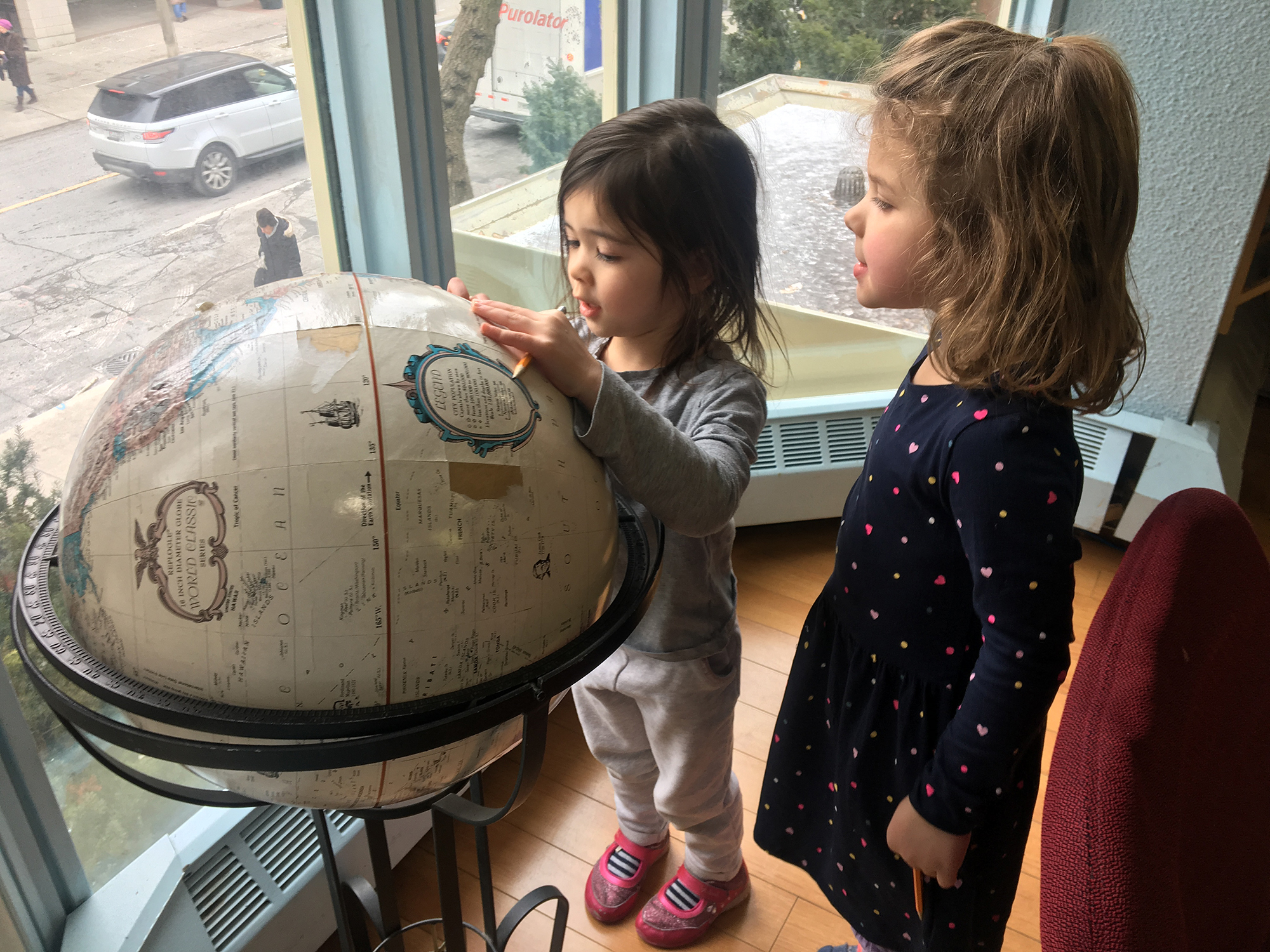 We are back after another week of growth and discovery in the Early Learning room. This week the girls expanded their artistic repertoire as they painted self-portraits. Throughout the process, many of them discovered that drawing eyes, noses, and mouths is much harder than originally believed. We had a lot of fun exploring the frozen outdoor classroom during our Outdoor Ed. time, and theorizing about how ice freezes. The girls are making good progress on their STEM for a Better World project learning about libraries; this week they completed their surveying, learned more about all of the services that the Deer Park public library offers, and compared the public library to Linden's own library. Enjoy the photos from the week. 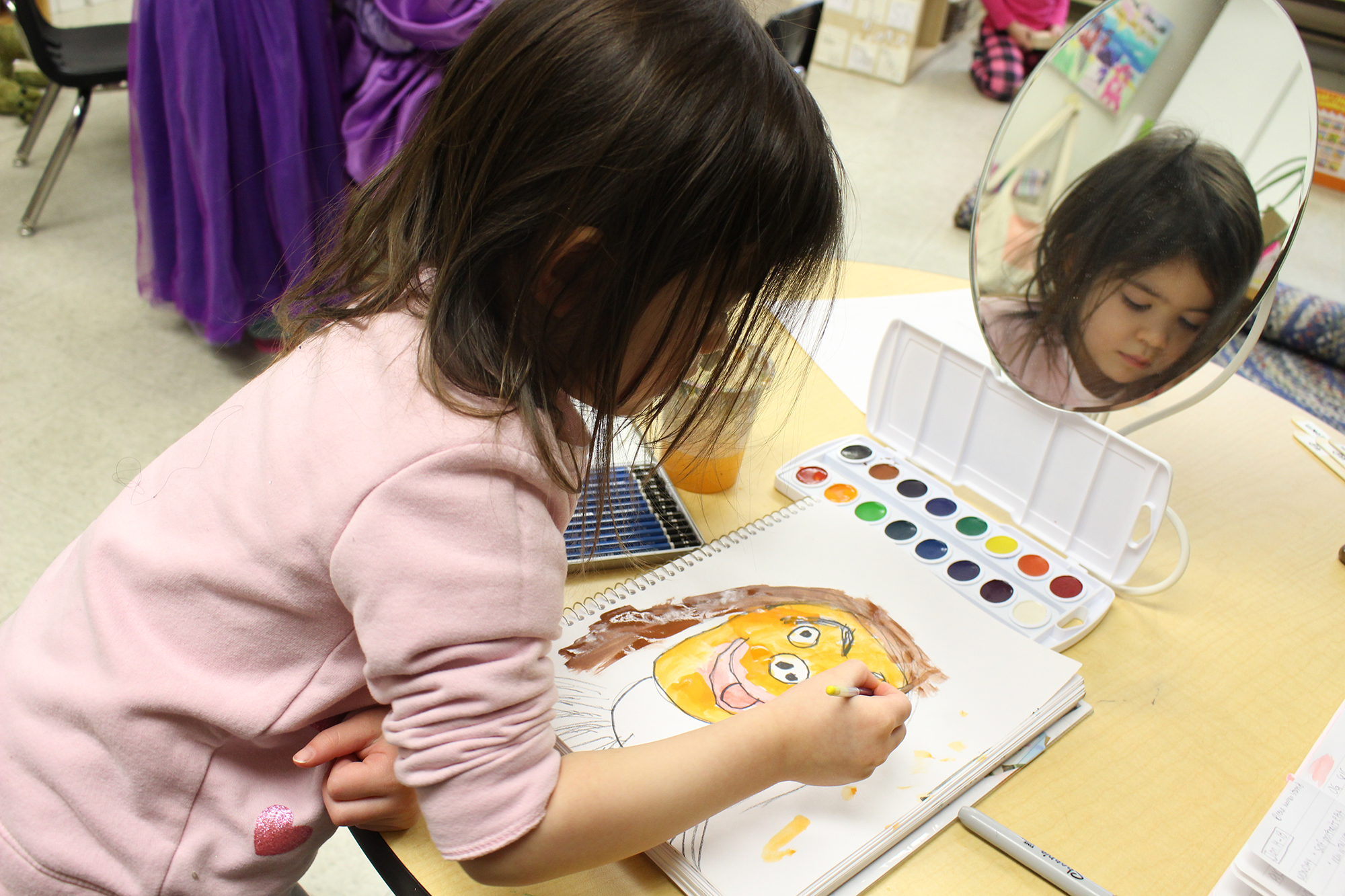 O is the first student to start her self-portrait. She loves using the mirror to help her sketch and then paint her features. While she works, Ocean comments that "an oval is my head... my eyes are circles... I have to do pink for my tongue." 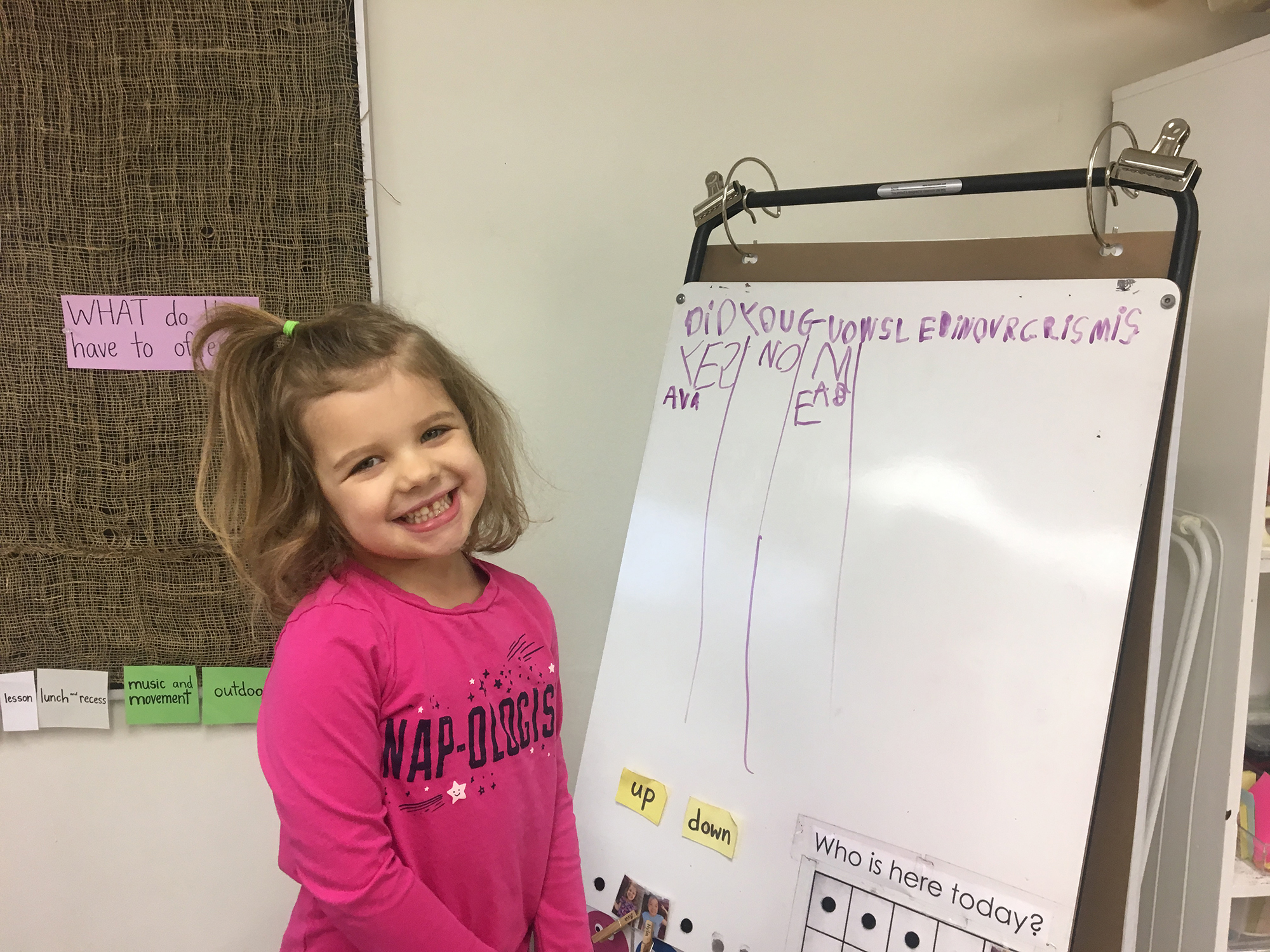 A is always excited to use her writing skills throughout the day. This morning she is in charge of coming up with our morning question: "Did you go sledding over Christmas?" 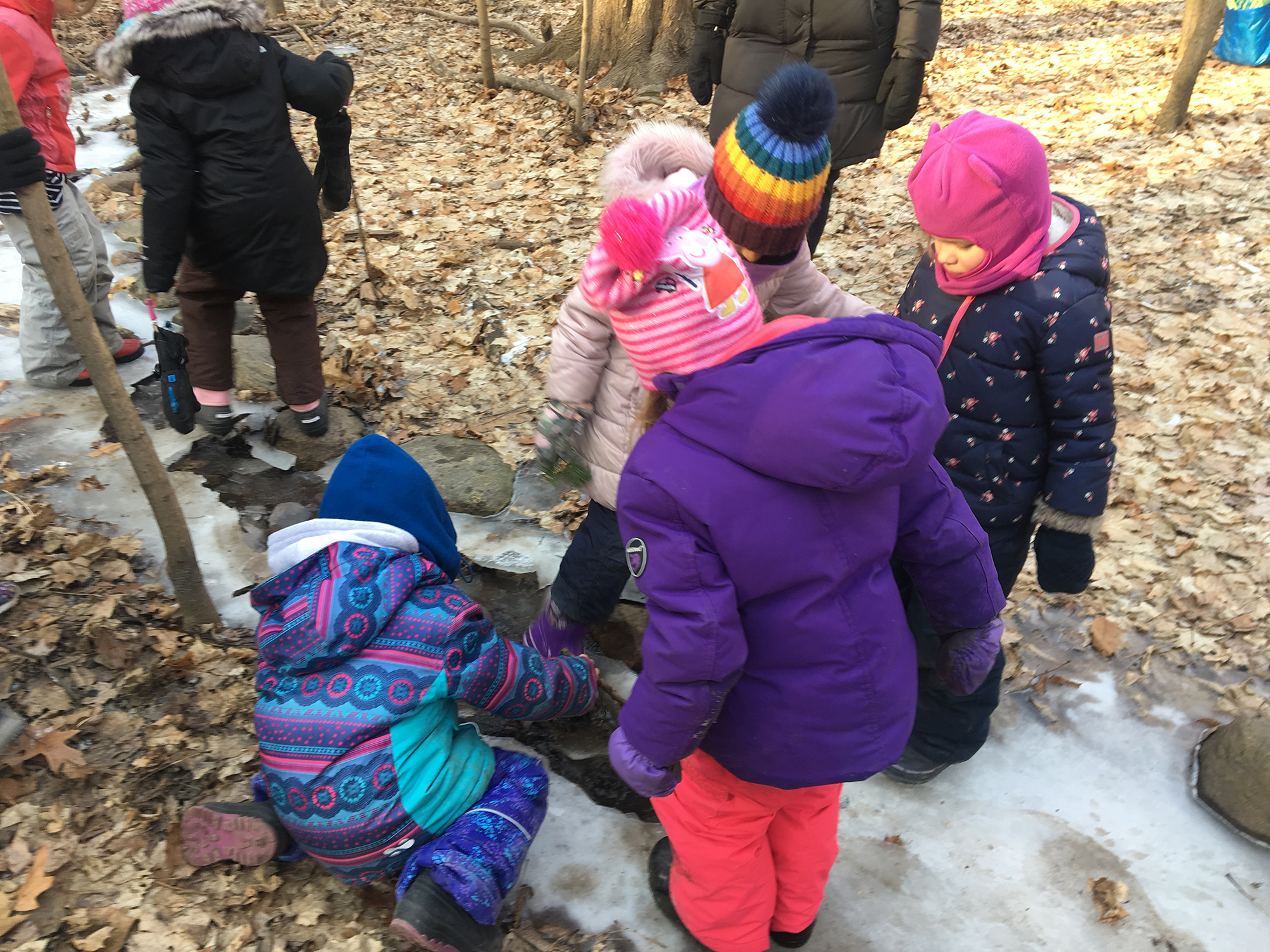 Our Outdoor Education group discovers that the stream that runs near our outdoor classroom is frozen over. The girls explore the different thicknesses of ice along the stream and test out which materials are useful to break through the ice. 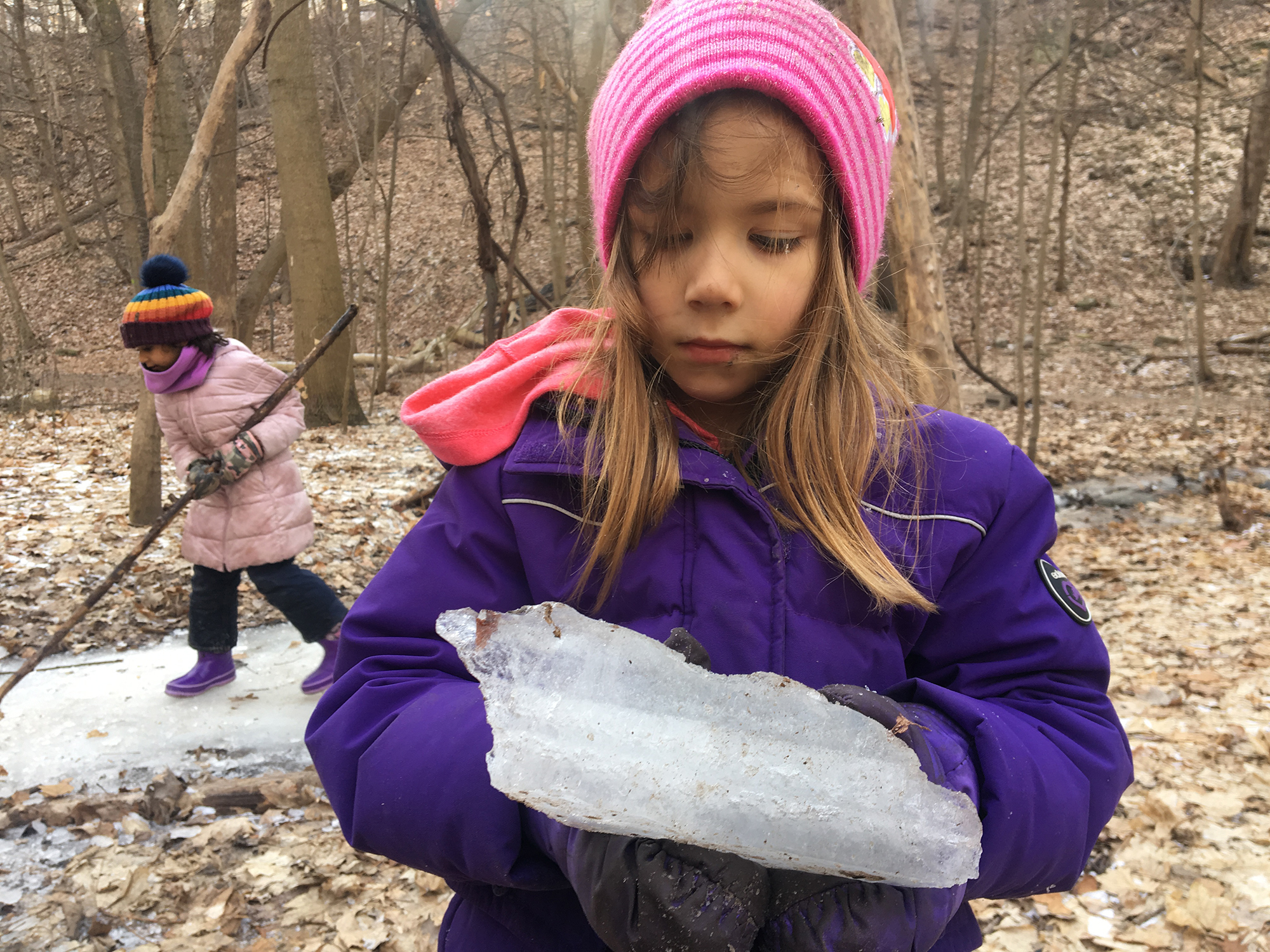 A discovers that the thick block of ice that she broke off of the stream has lines through it. We wonder if ice might develop in layers, making some places thicker than others. 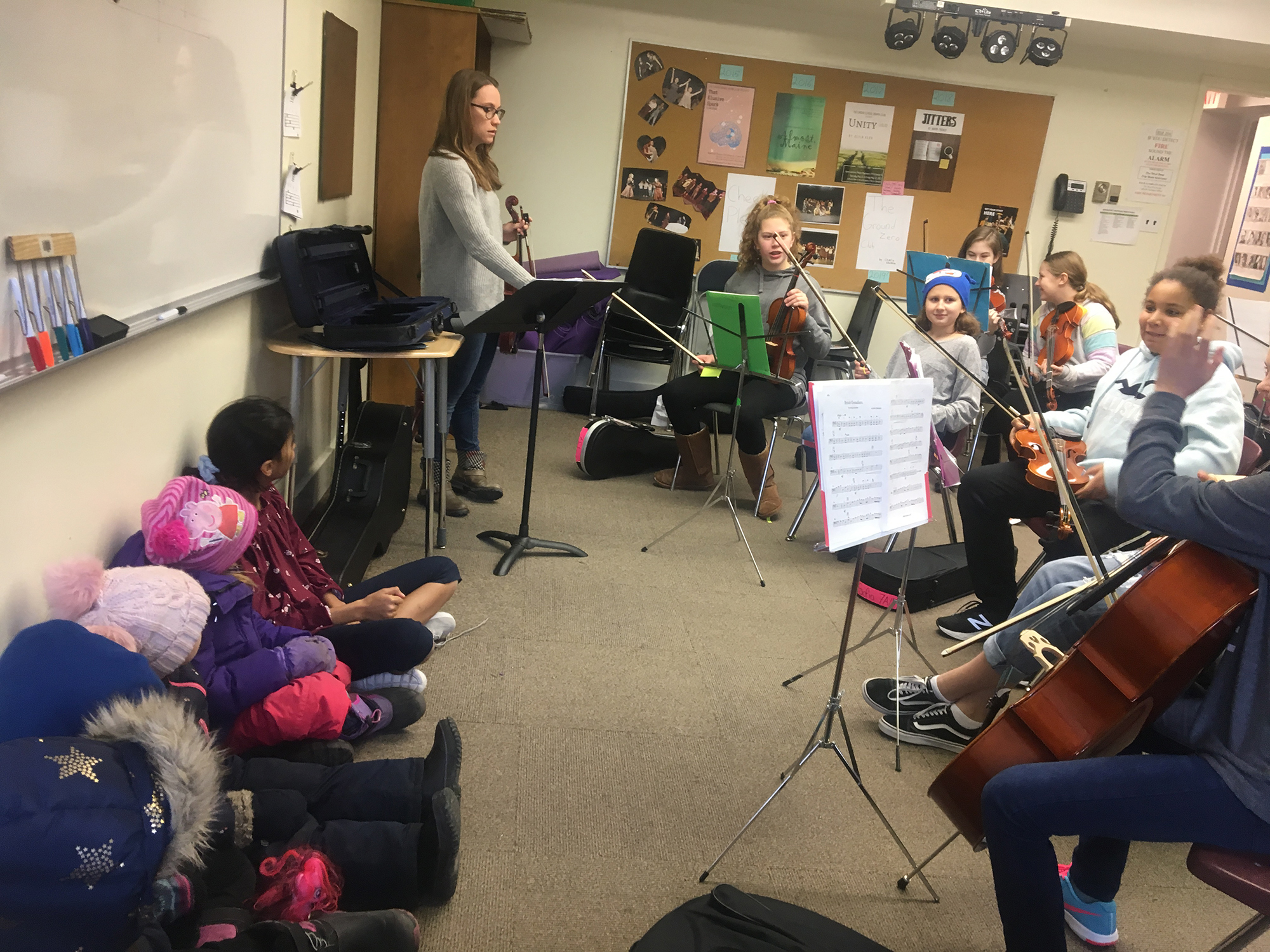 Before heading up to recess, the Early Learners are treated to an impromptu performance by one of the grade 7 strings classes. Thanks for taking time to show us your instruments! 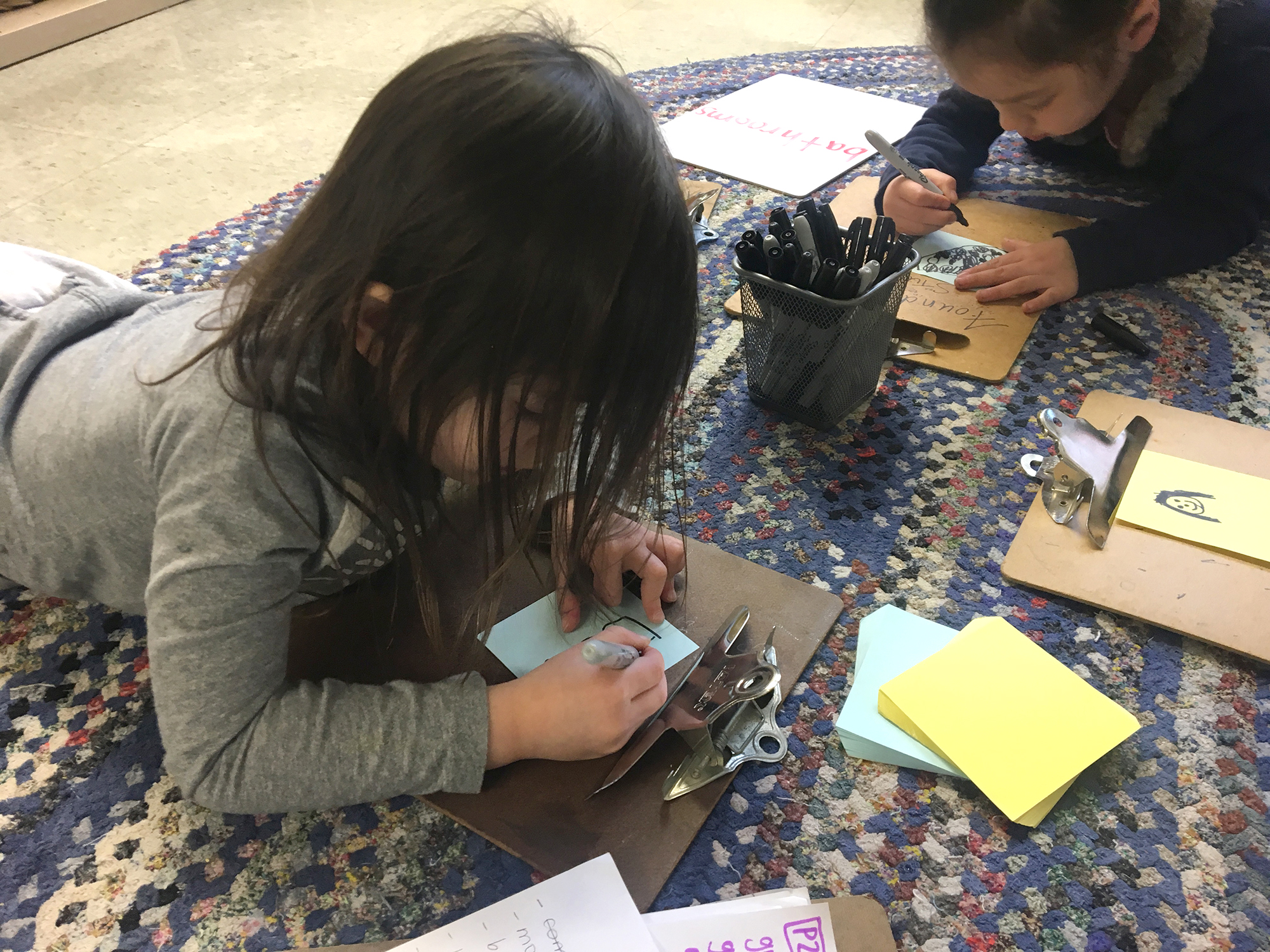 After a visit to the Deer Park library where we made a list of all of the things we noticed while we walked around the library, the Early Learners draw and write about everything that they saw. Some surprises included newspapers and magazines, computers, and stairs leading down to a basement (which we're curious if it's filled with more books). 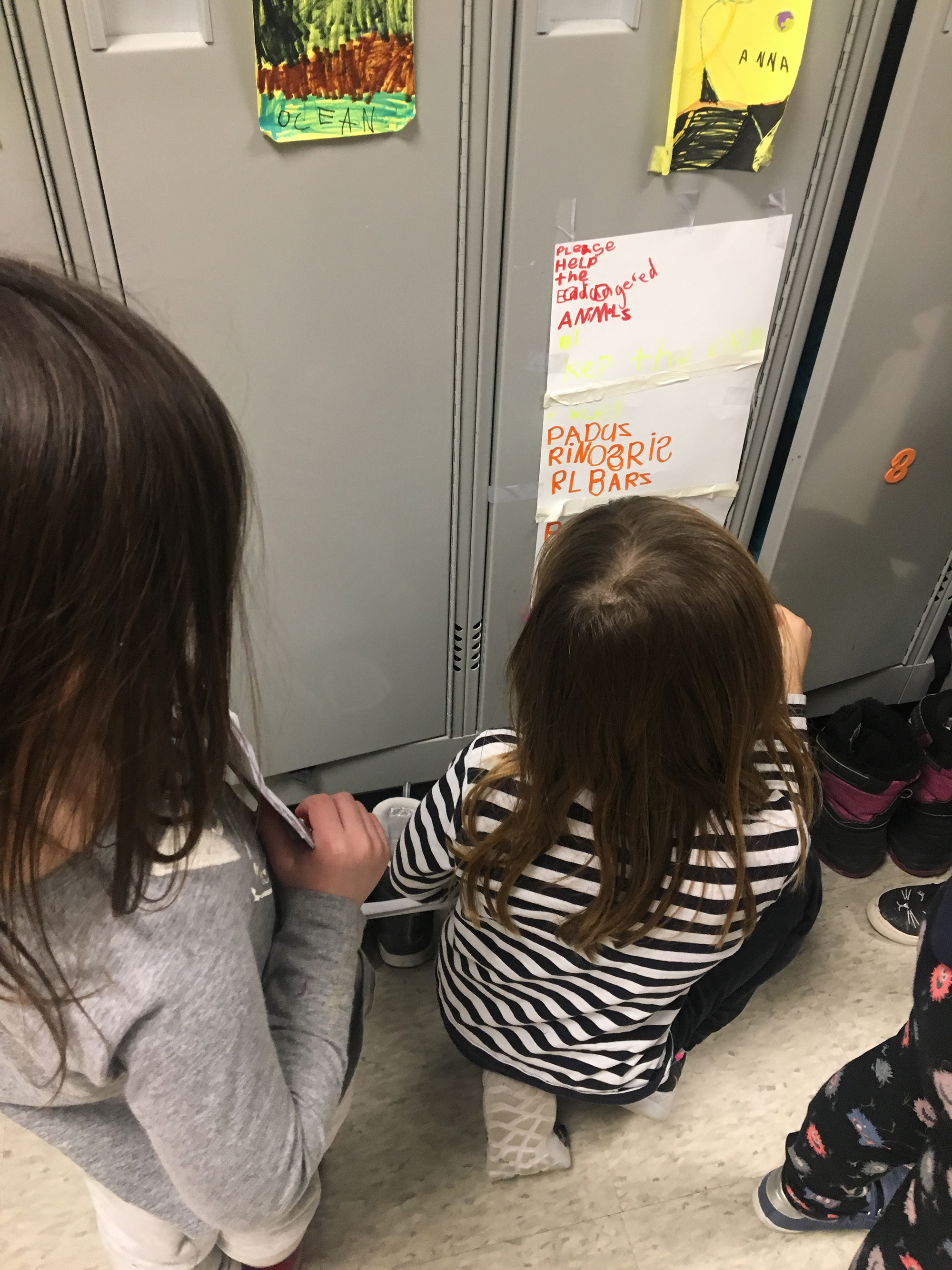 A arrives to school this morning very concerned about the animals "in danger" around the world. She decides that it is important to help others at Linden learn about endangered animals and gets help starting a poster from a grade 6 student at recess. A completes her sign later in the day, which reads "Please help the endangered animals by keeping the environment clean". She adds a list of all of the animals that she thinks might be in danger: "pandas, rhinoceros, polar bears, bald eagles, fish, leopards, and owls". 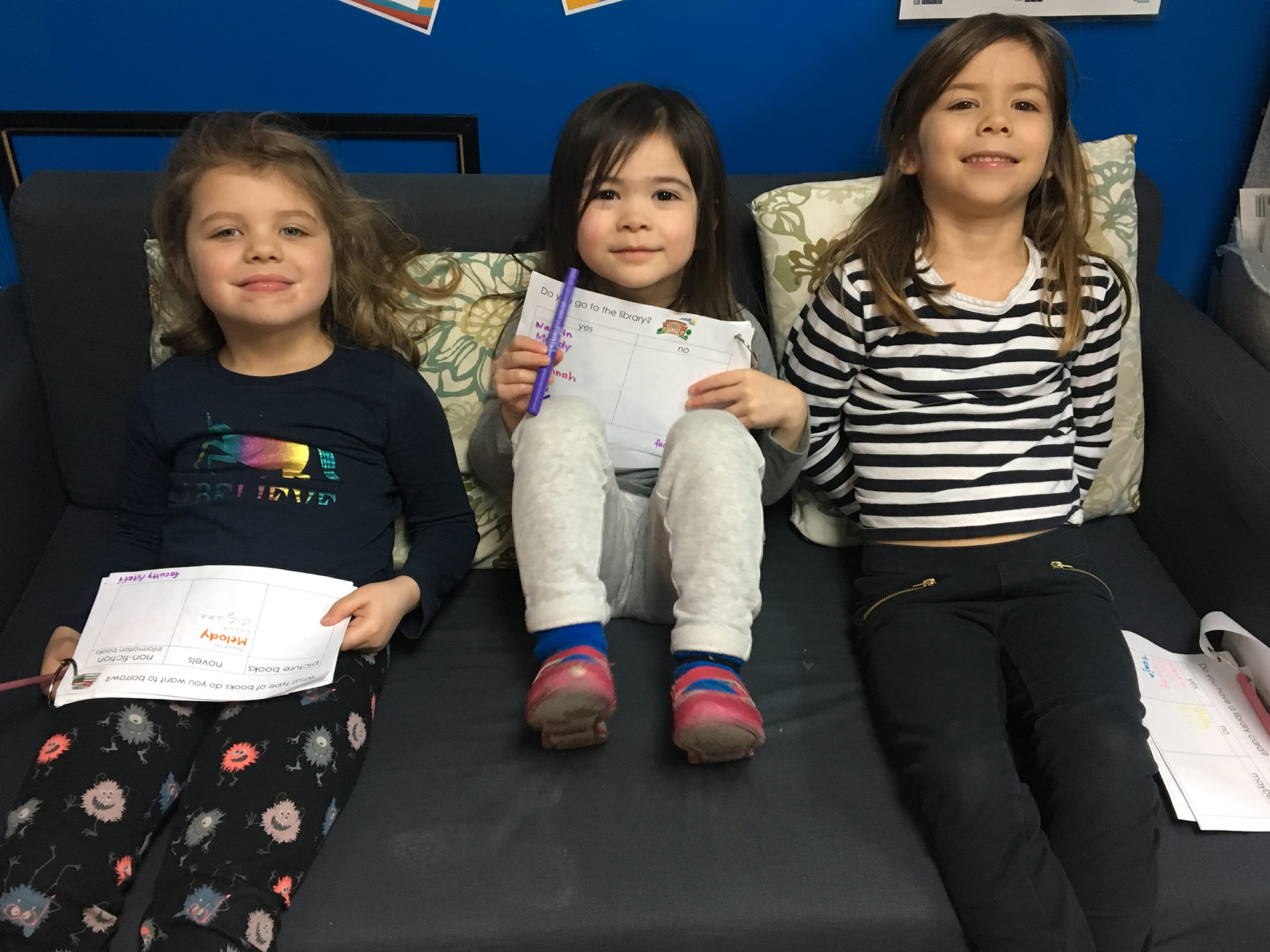 AB, O, and AK take a break from surveying the faculty on the comfy couch in the faculty workroom. They were surprised that the faculty have a couch to relax or do their work on. 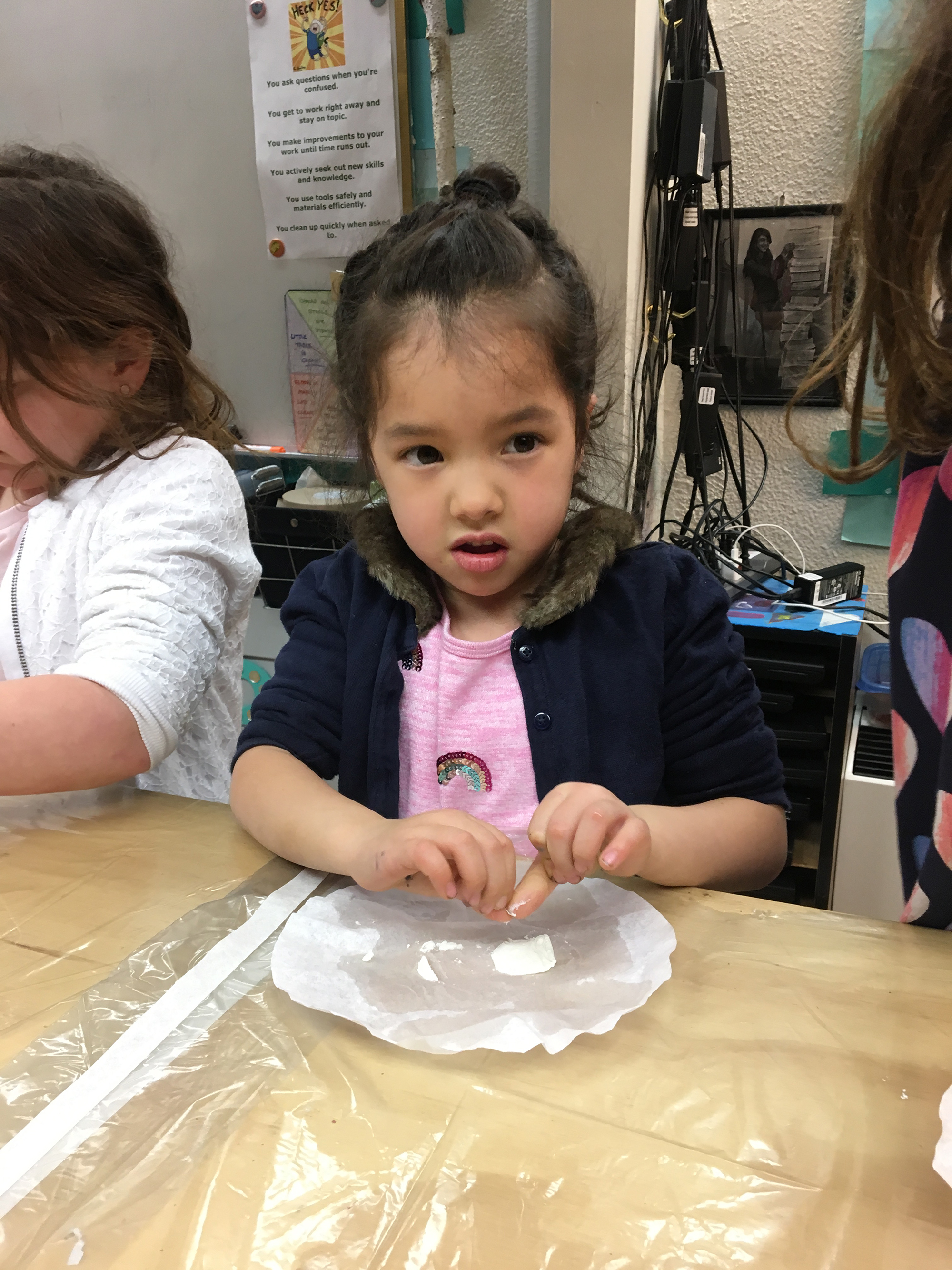 In CERES, the girls learned that casein plastics are made out of milk and have been used to make buttons for clothing among other things. N tries to shape a piece of casein plastic that we made using heated milk mixed with vinegar. 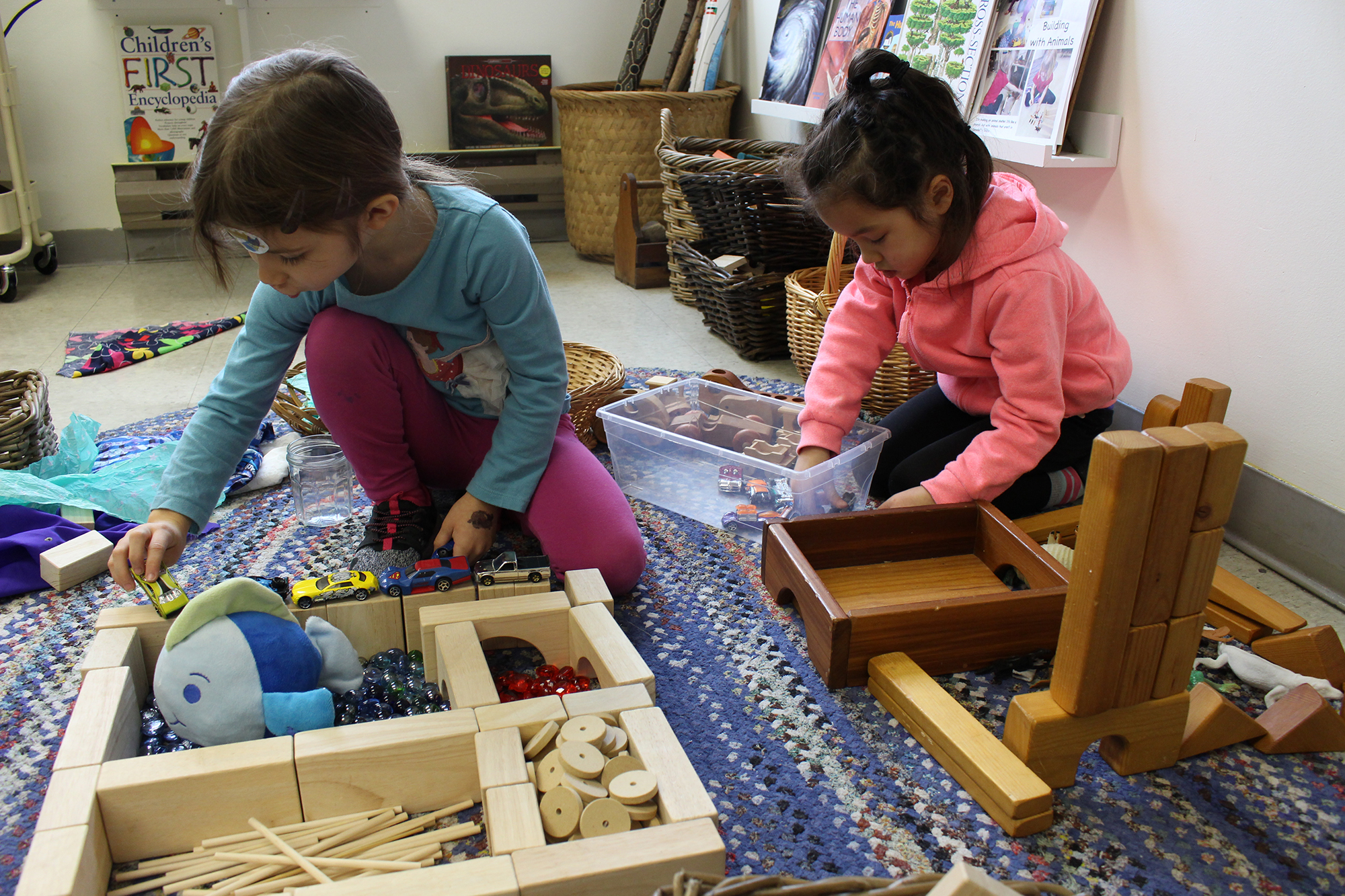 A and N work together at the Building centre to make a restaurant and adjacent animal home. At the restaurant you can order fish, spaghetti, tomato sauce, and meatballs - yum! 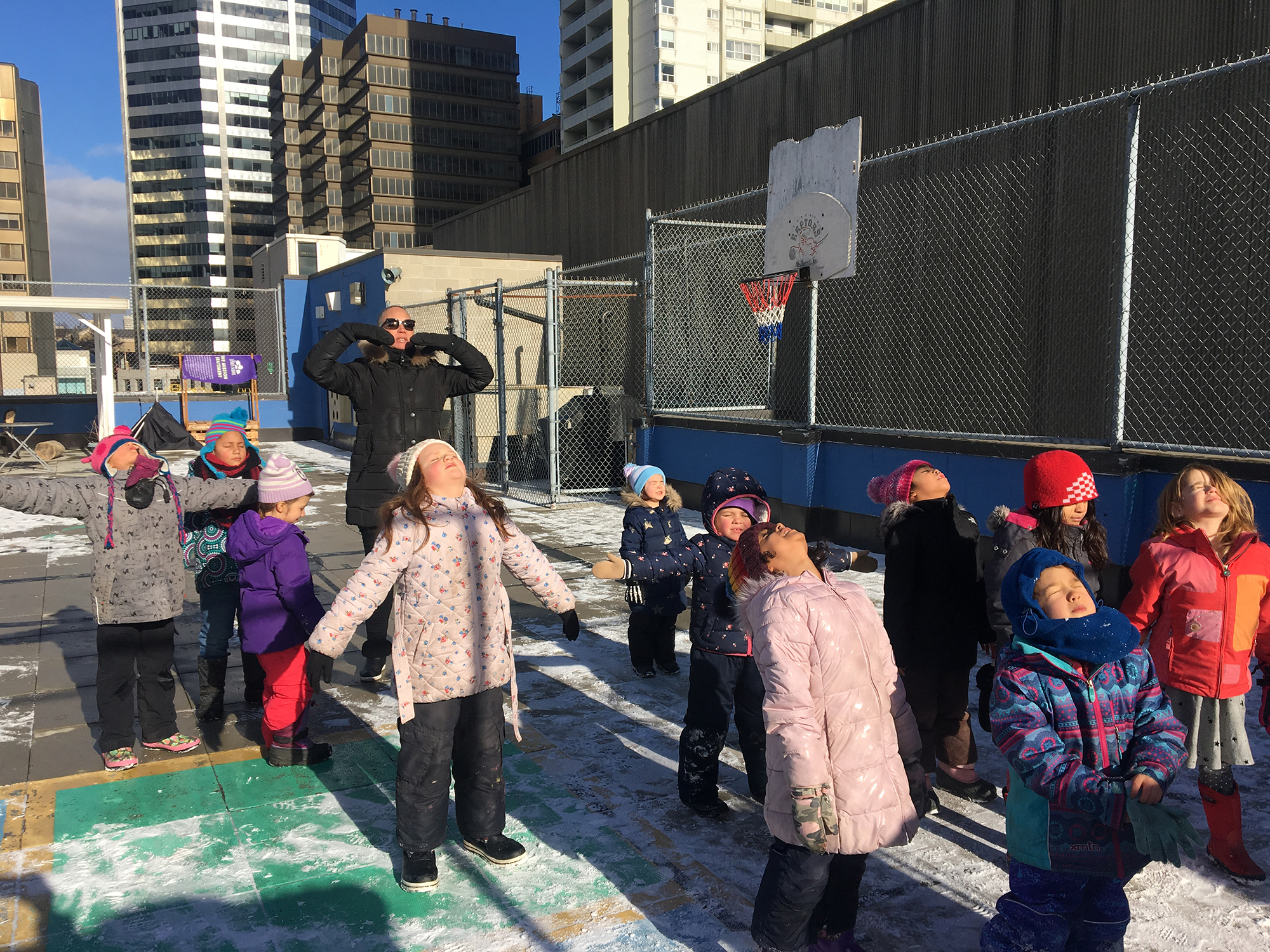 We are excited to catch a glimpse of sunlight during morning recess. We spend a moment soaking in the sun's beautiful rays before heading back indoors. 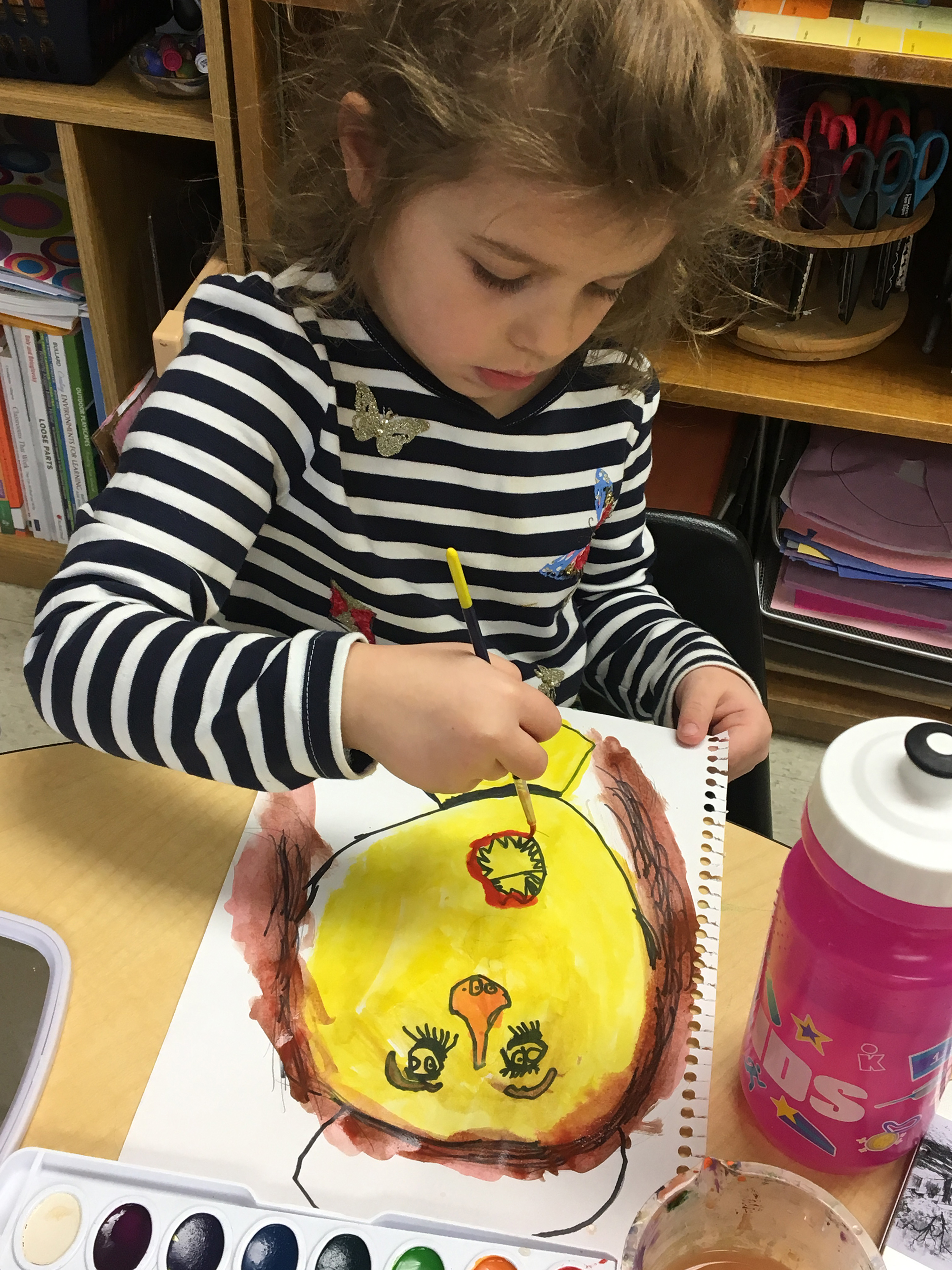 A is incredibly focused as she adds the final details to her self-portrait artwork. While drawing her mouth, A explains: "that sort of looks like my mouth but it has a little tip." 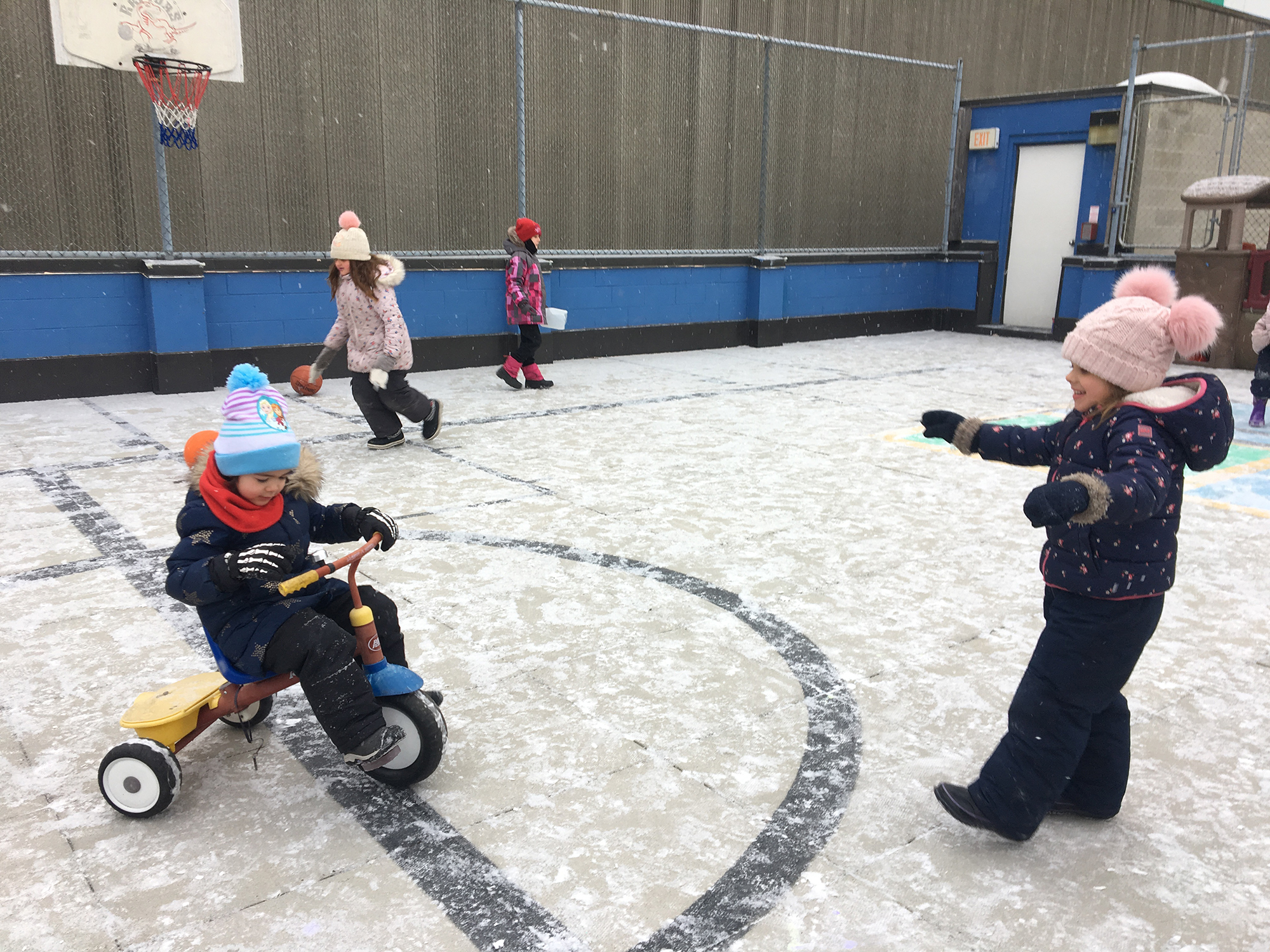 O takes the donated tricycle for a quick spin on the roof. It's an exciting morning when we have a new toy to play around with. 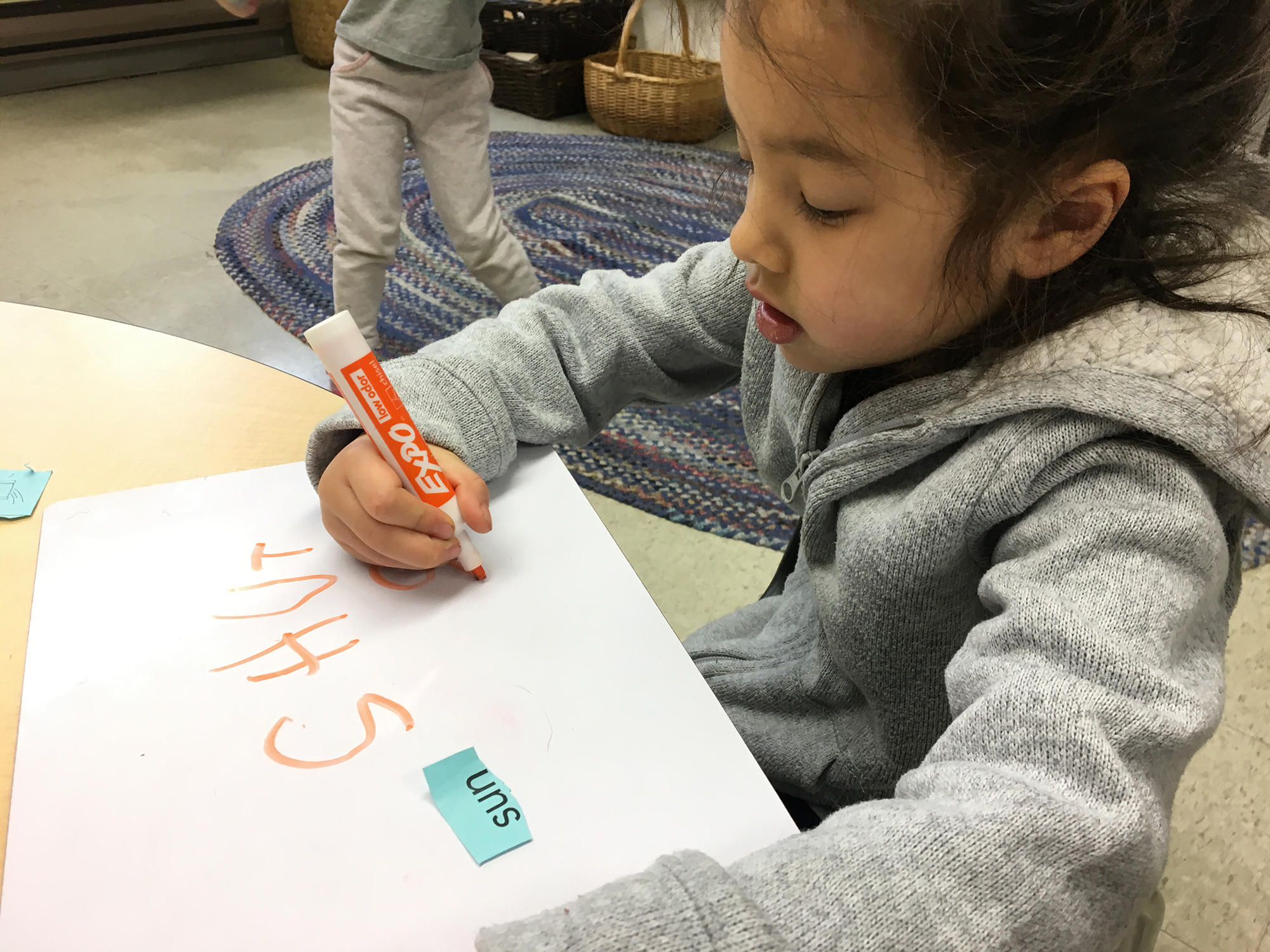 N practices writing out her weekly words. She is working with the short vowel sound /u/ this week and doing well hearing it in each word. 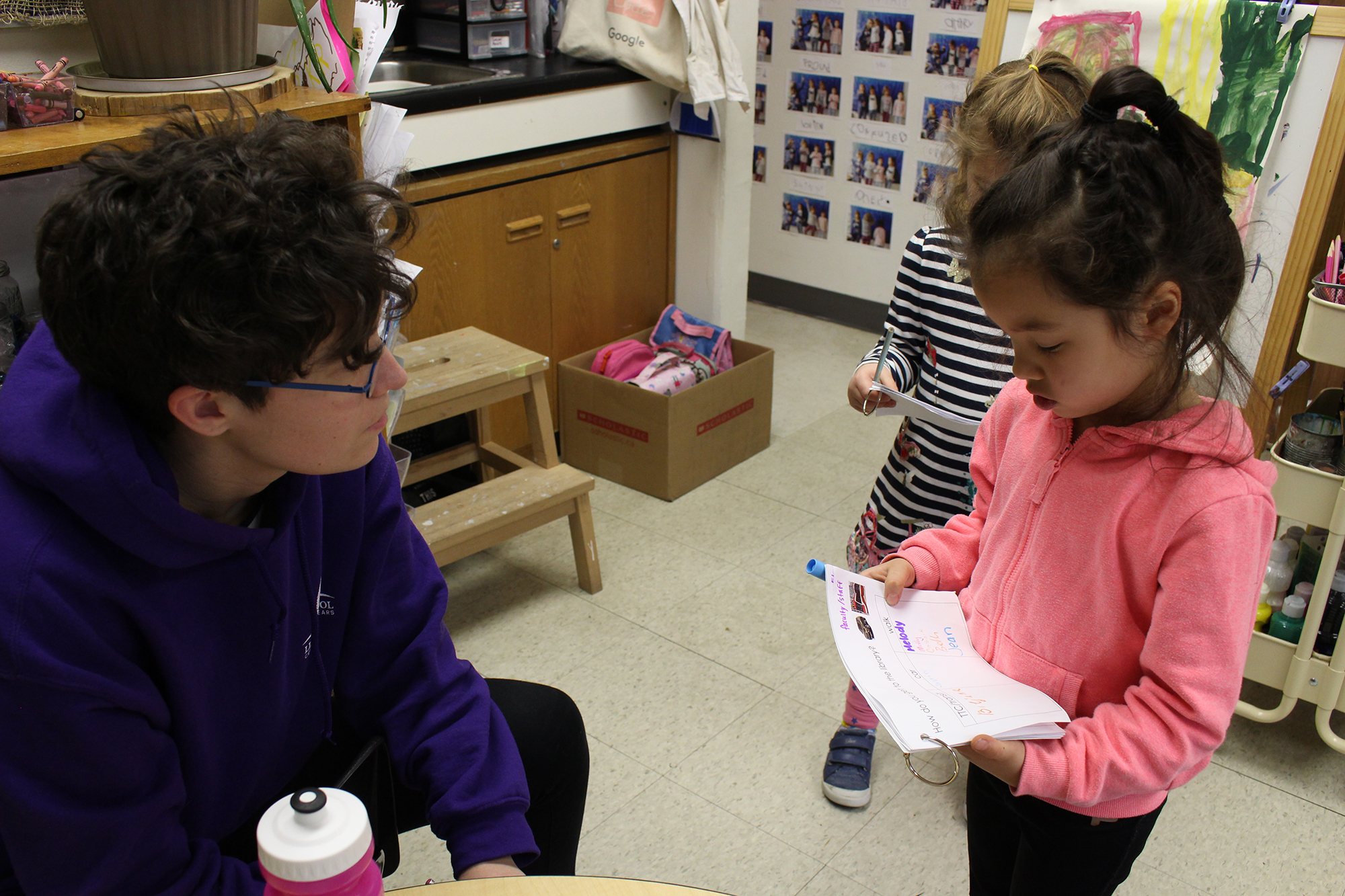 N surveys Viviane when she stops by the classroom for a quick visit. We only have Linden's faculty to survey before we are ready to convert our survey data into graphs. 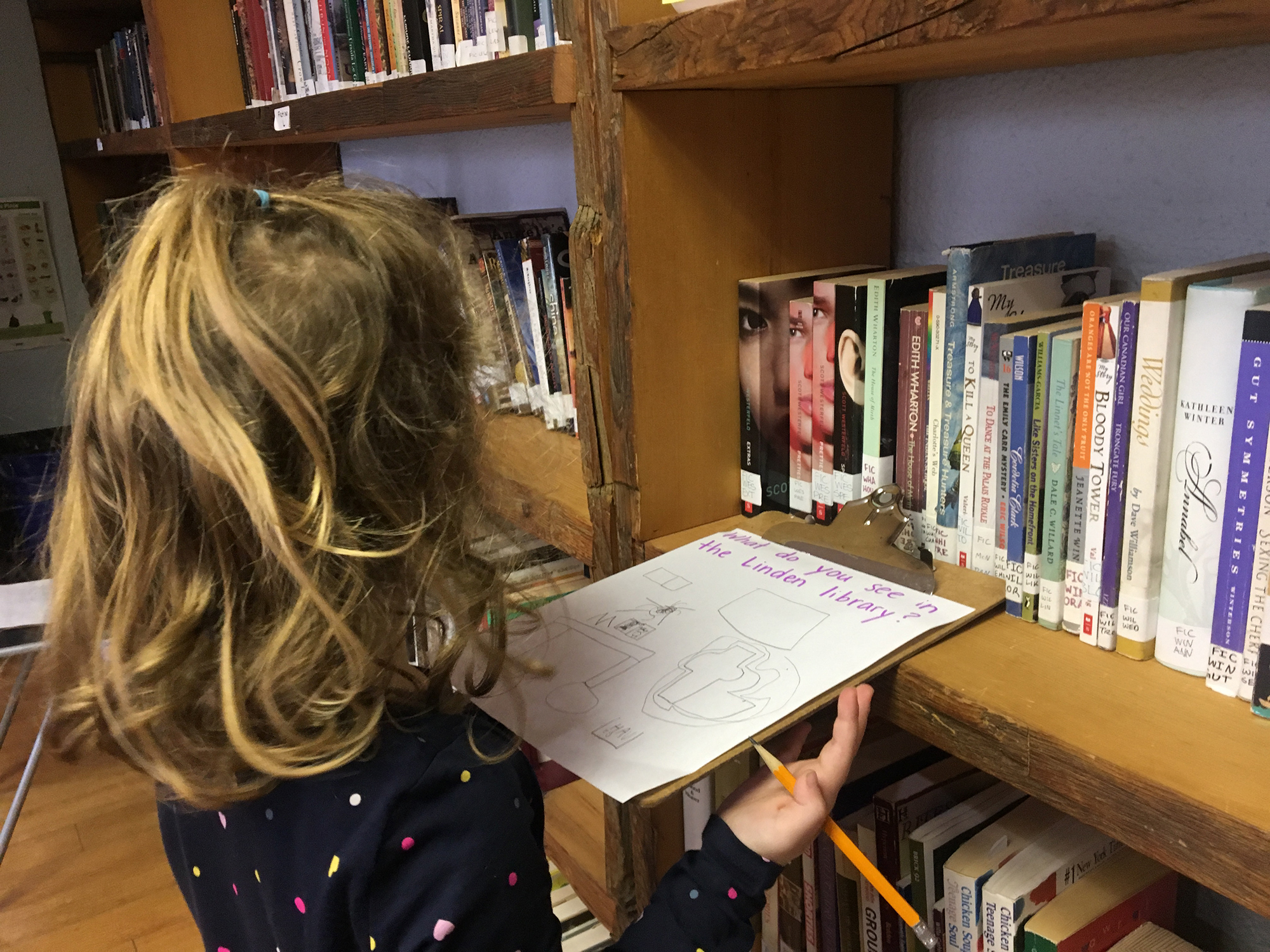 This afternoon we are off to the Linden library (also known as the Nancy Ruth library) to explore how it is similar to, and different from, the Deer Park library. Each girl takes notes in the form of pictures and/or words about her observations. 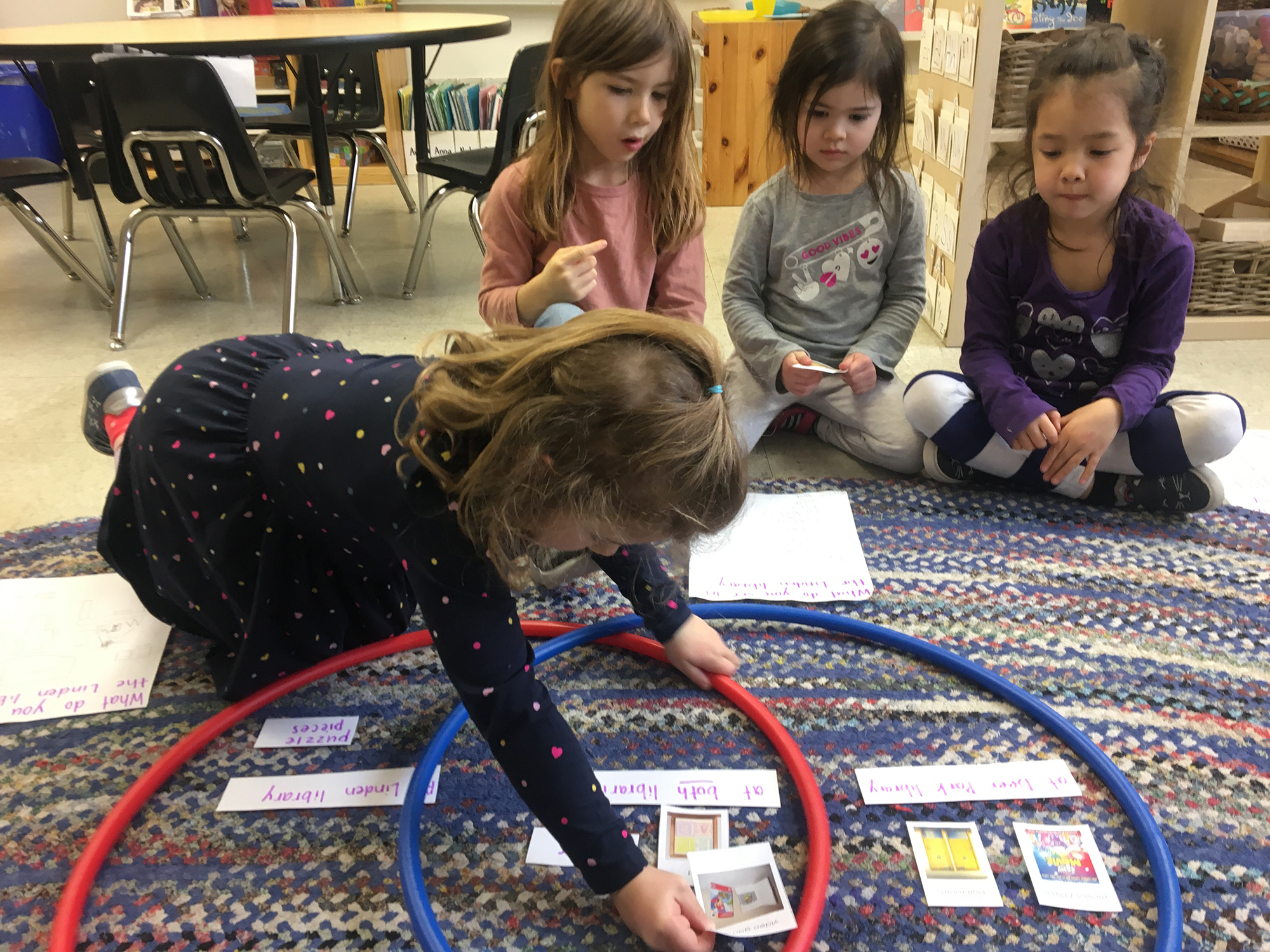 After compiling thorough lists of our observations in the Linden library, we use a Venn diagram (or two hula hoops) to compare and contrast Linden's library with the Deer Park library. The girls notice that the two libraries have a lot in common, but there are also some differences. I wonder if they will suggest any ideas to improve the Linden library after thinking about what it might not have! 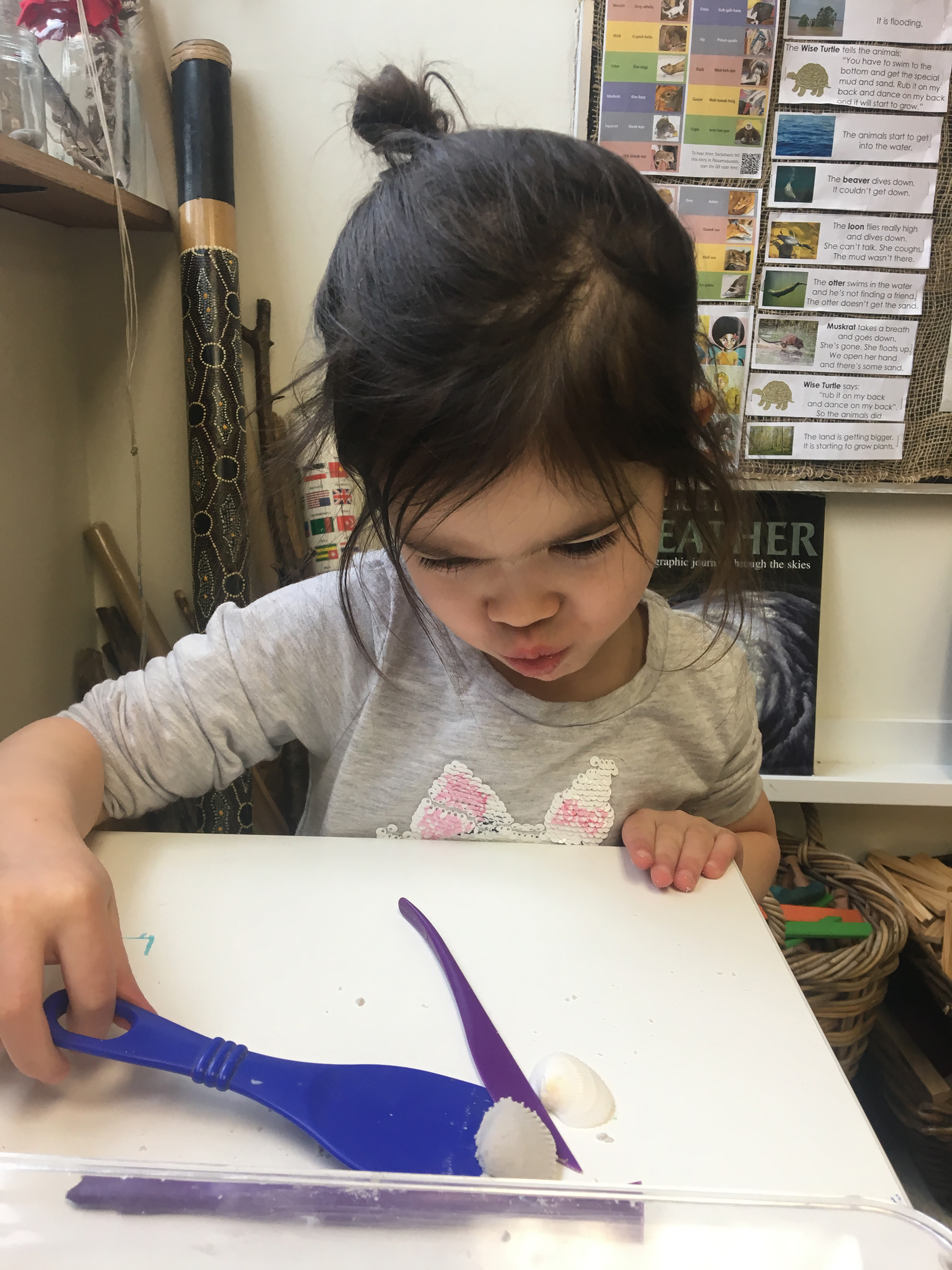 O loves learning through sensory experiences, including playing with kinetic sand. This morning she is using the shells as moulds to create a bunch of sand shells. 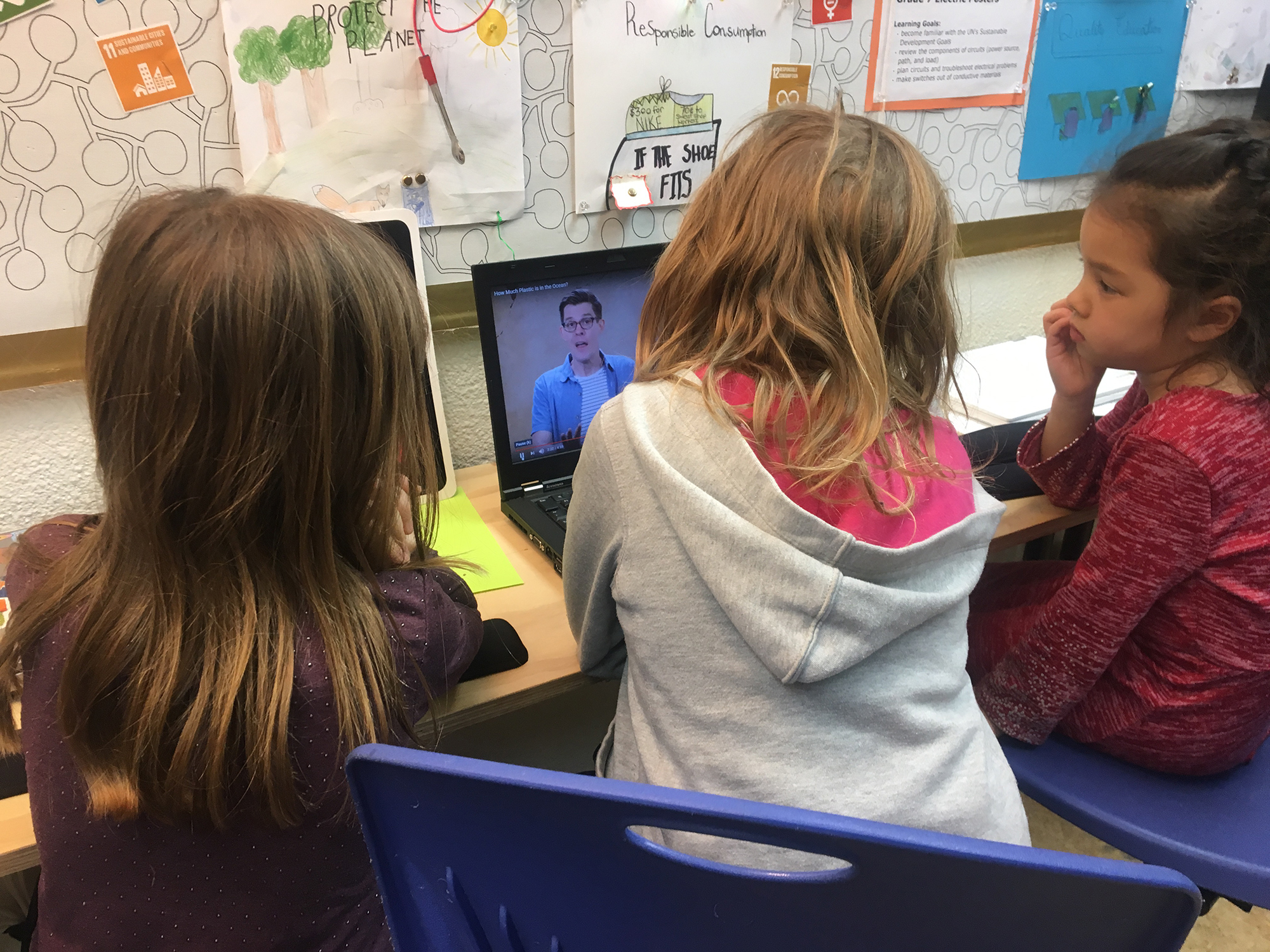 A, M (grade 2) and N watch a video during CERES to learn more about plastics in the oceans. This is one of four centres designed to help the girls learn more about the impact of plastics on the environment and finding ways to replace one-use plastics with reusable items. 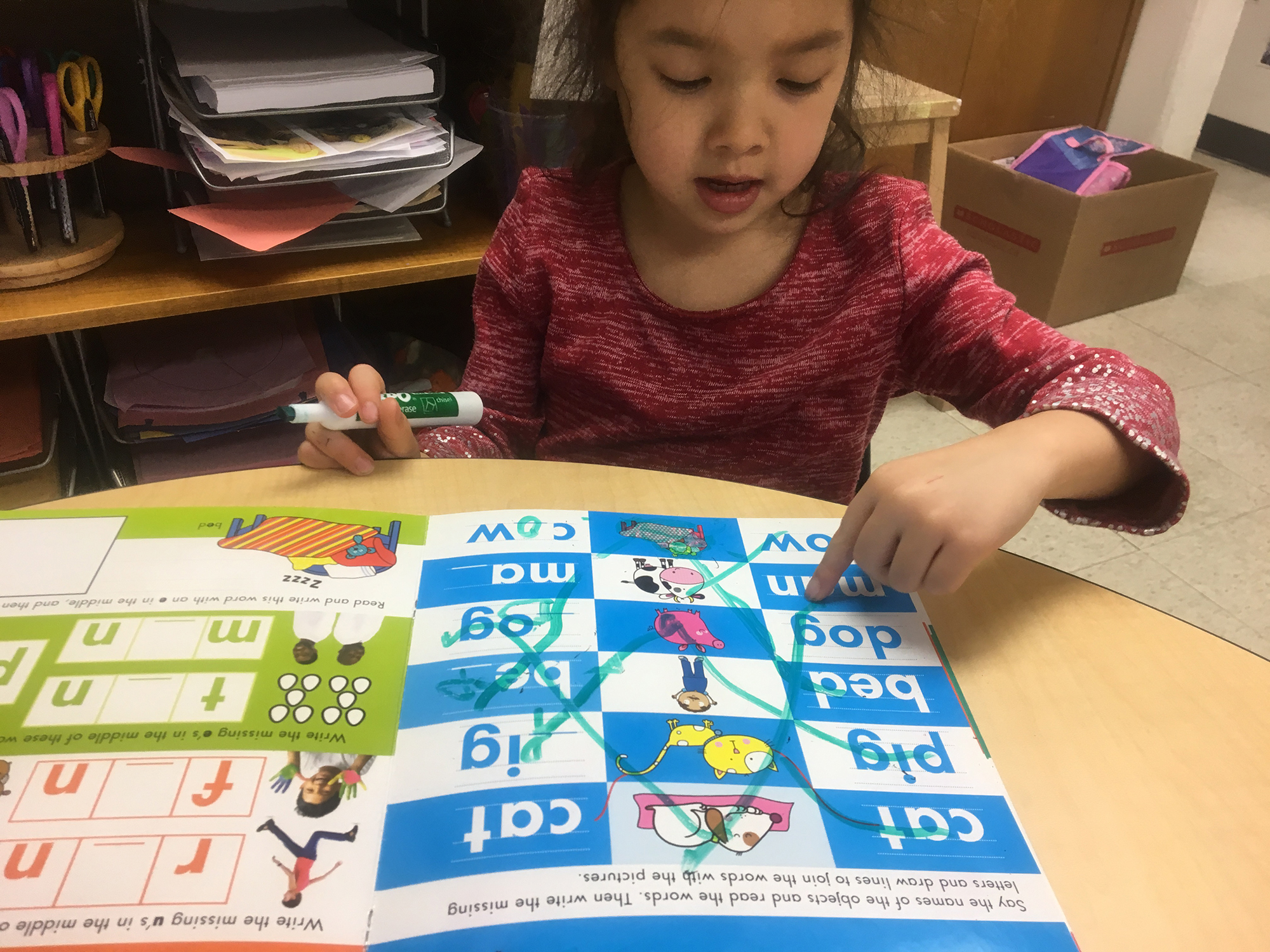 N spends some time practicing reading and spelling short (cvc) words in our erasable books on Friday afternoon. Independent literacy time is a nice way to unwind after a fun week of learning together.