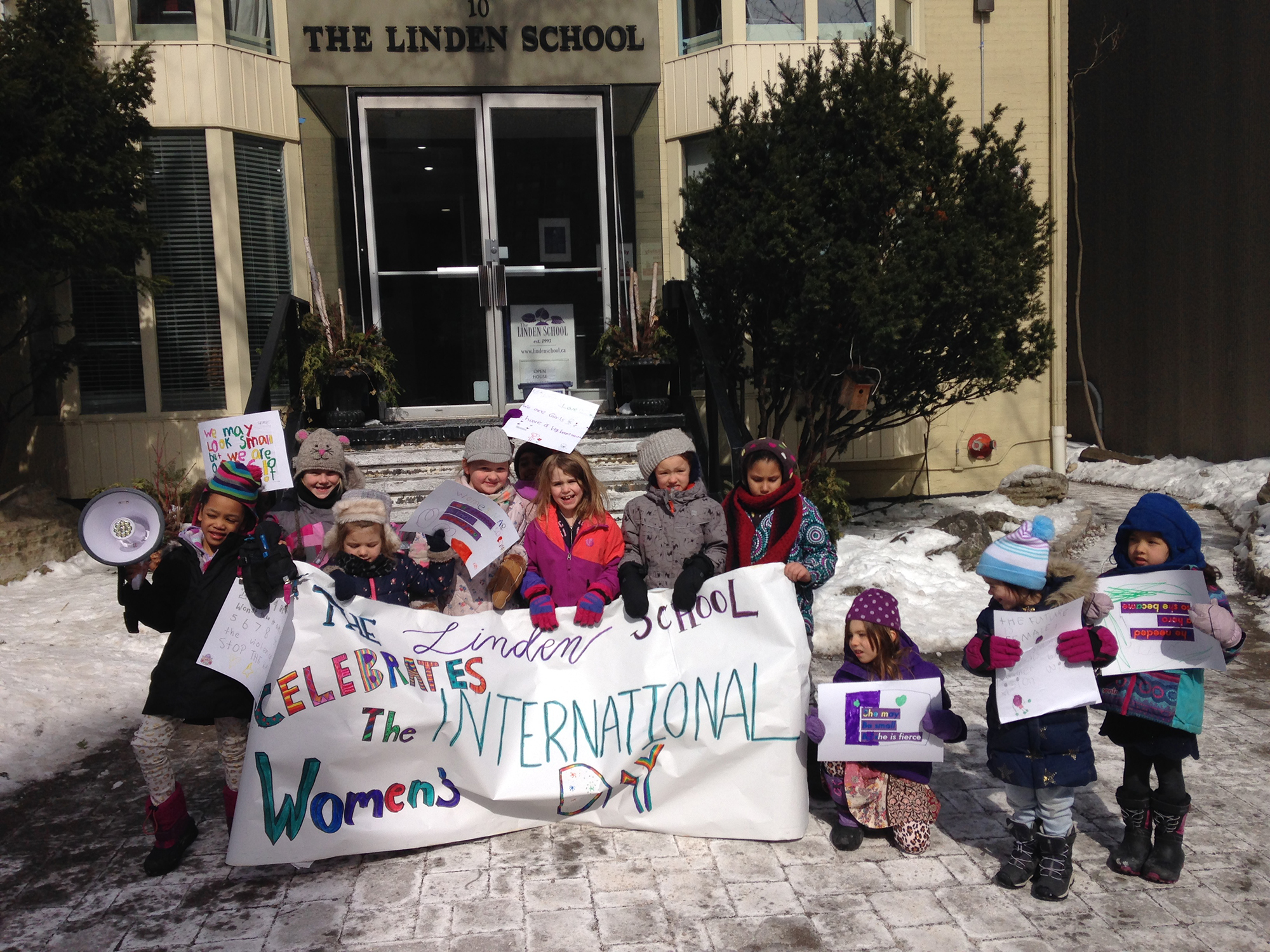 As we make our way through the final chilly days of winter, we get to participate in a fun-filled Spirit Week, led by the grade 12 students, to get us excited about March break. Each day had a different dress-up theme, starting with pyjama day on Monday and ending with tourist day on Friday. On Friday the Early Learners had the opportunity to perform their dance during the Lipsync celebration. This energetic week was also filled with learning about important women today and in the past as we prepared for Linden's march on International Women's Day. We all had a great week learning and playing, and we hope that you enjoy the pictures and video from the fantastic week that we had together. 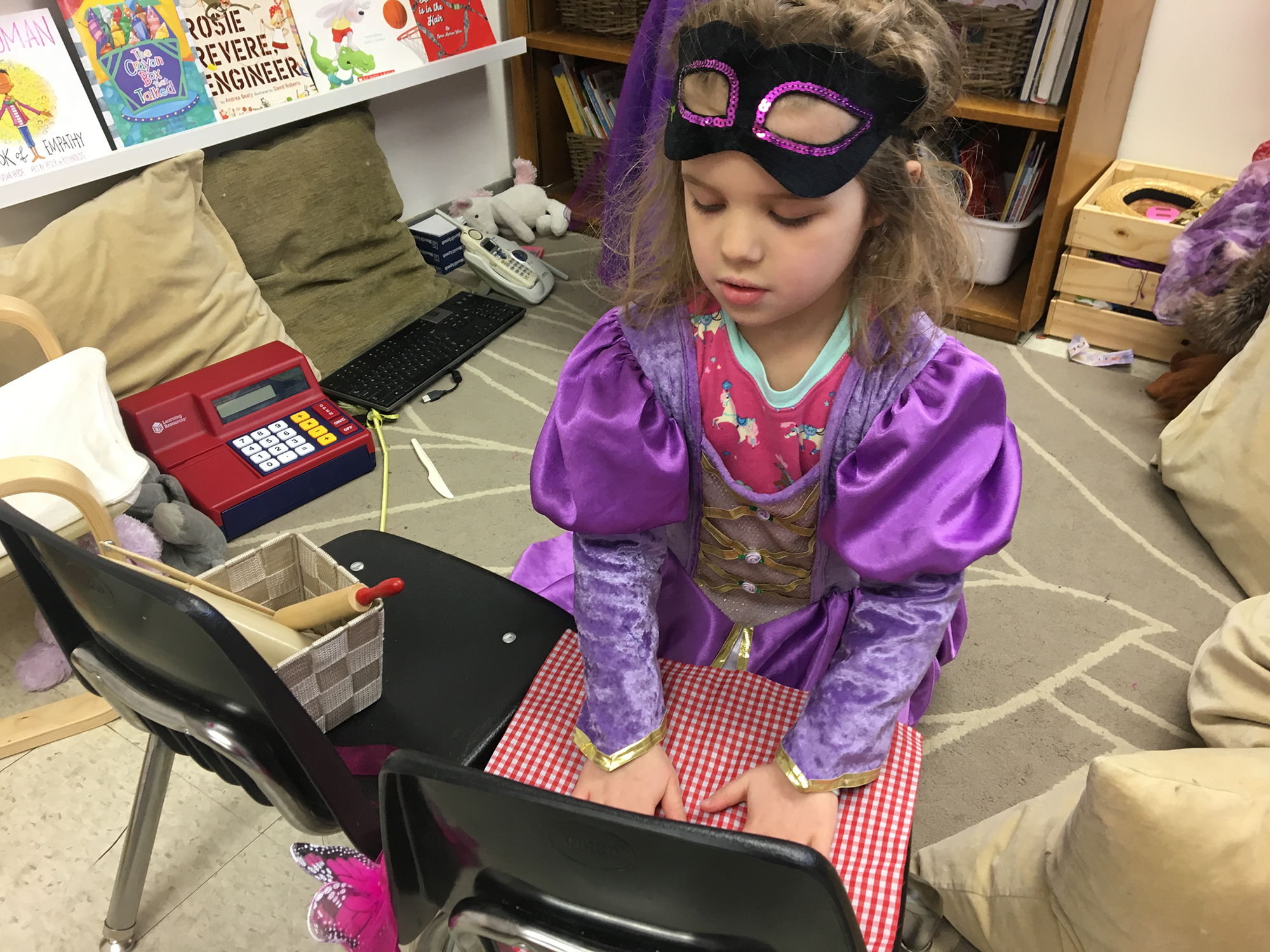 A prepares a gourmet lunch for N and their stuffy friends while playing in the Drama centre this morning. 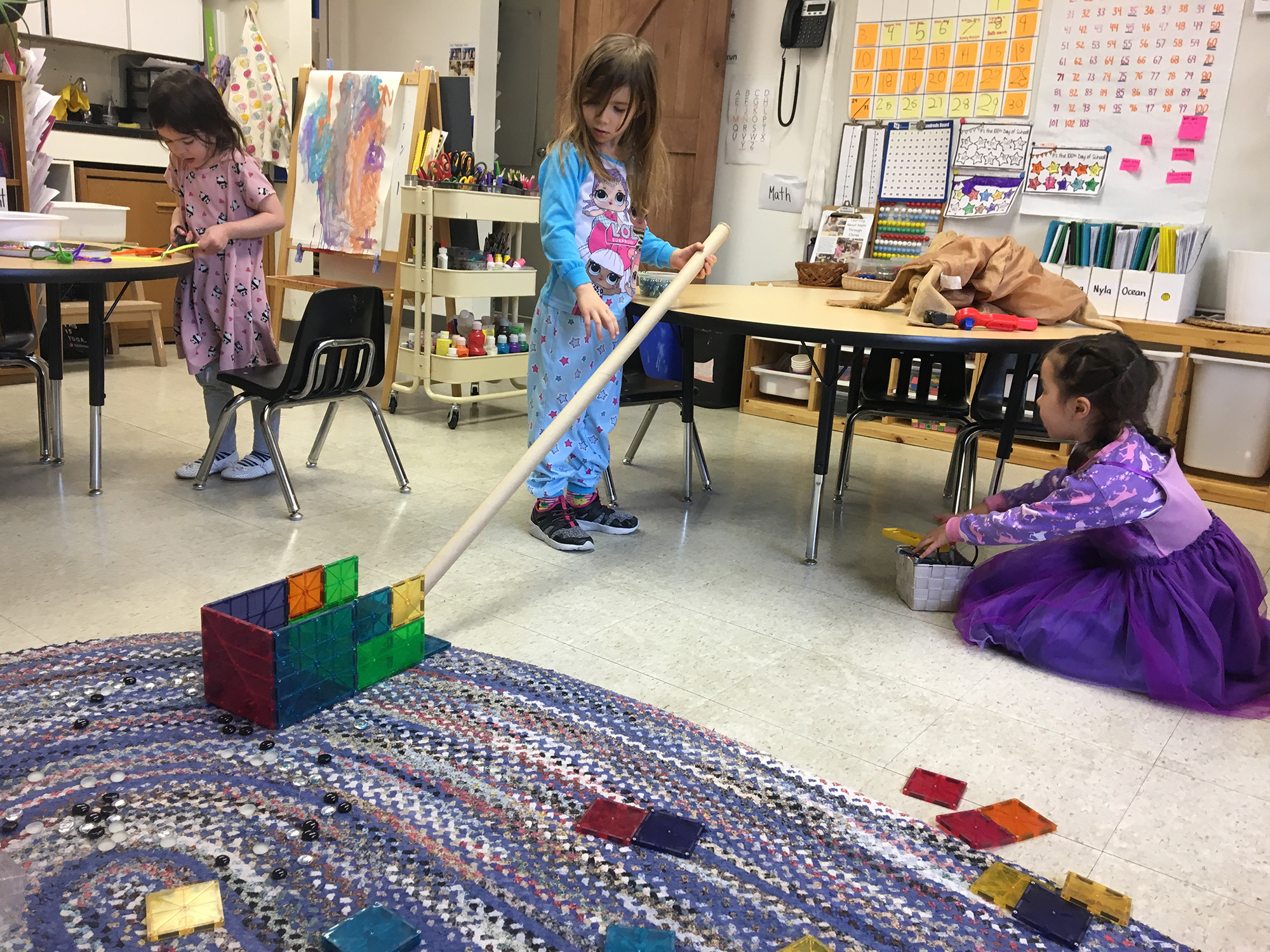 A has the idea to build a marble "run" or ramp into the magnatile structure that she has created at the Building Centre. Initially she notices that the marbles keep popping out of the structure, so A builds the back wall up taller, then makes the side walls taller as well. She continues to test her creation as she goes as a true engineer does. 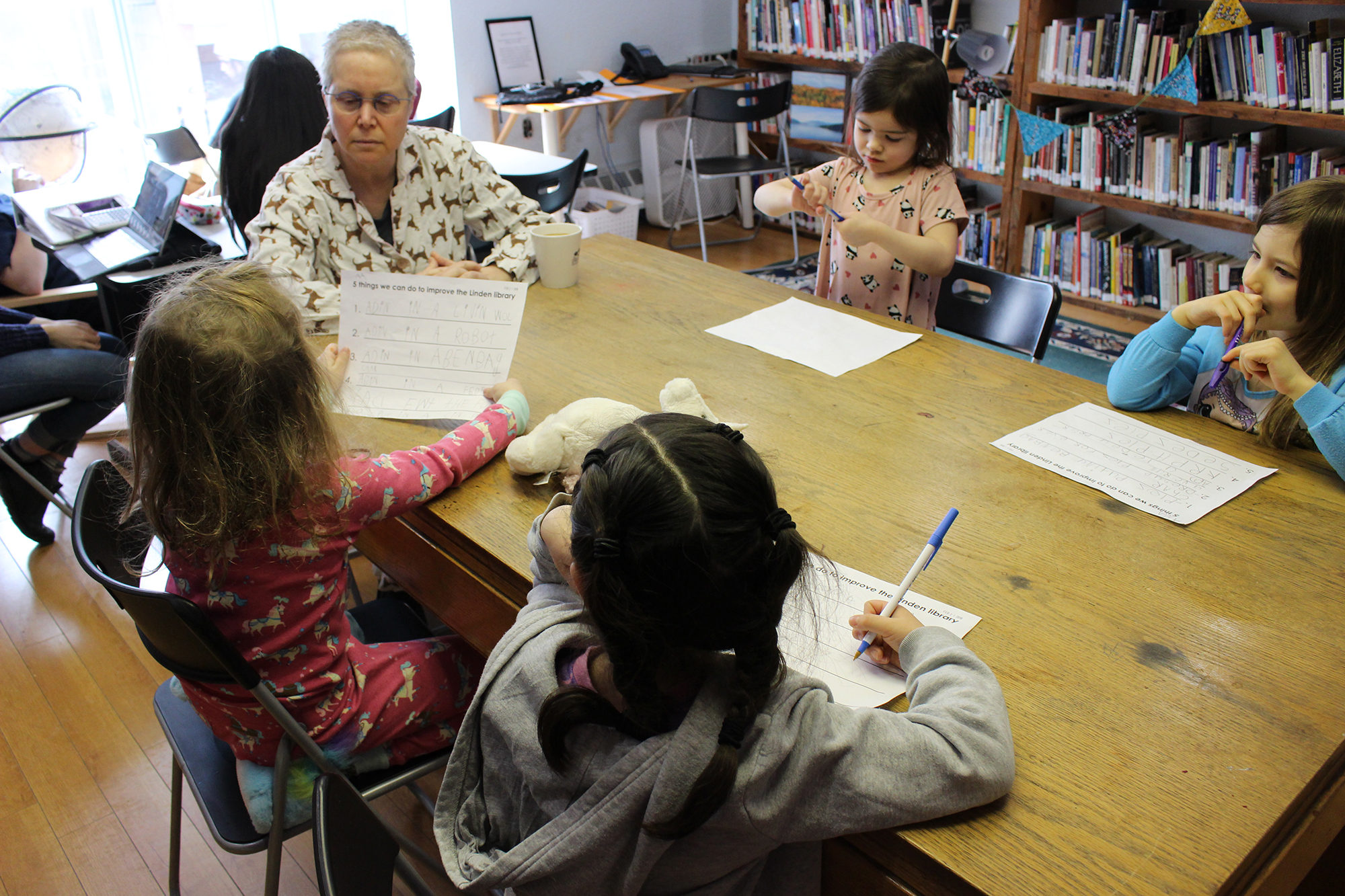 The Early Learners have an exciting meeting with Janice, our principal, today. Each student has prepared a list of the 5 things that she thinks could improve the Linden library. One at a time, the girls share their ideas with Janice, discuss their feasibility with her, and make a note of "yes", "no", or "maybe" to each idea. First step we are going to go ahead with is to co-create a "living window" to add some fresh life in the library. 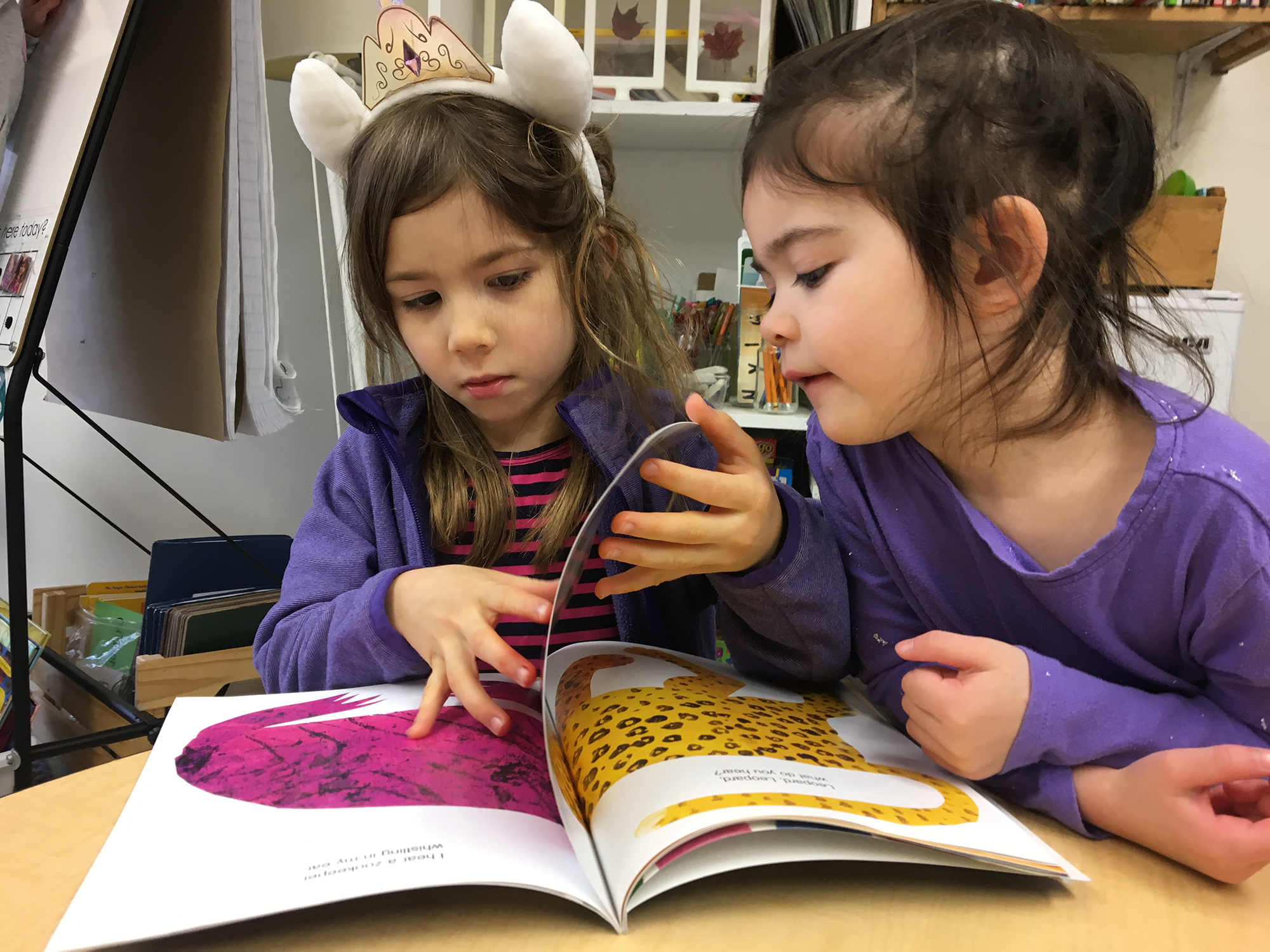 A and O do some shared reading with the book "Polar Bear, Polar Bear, What do you Hear?". 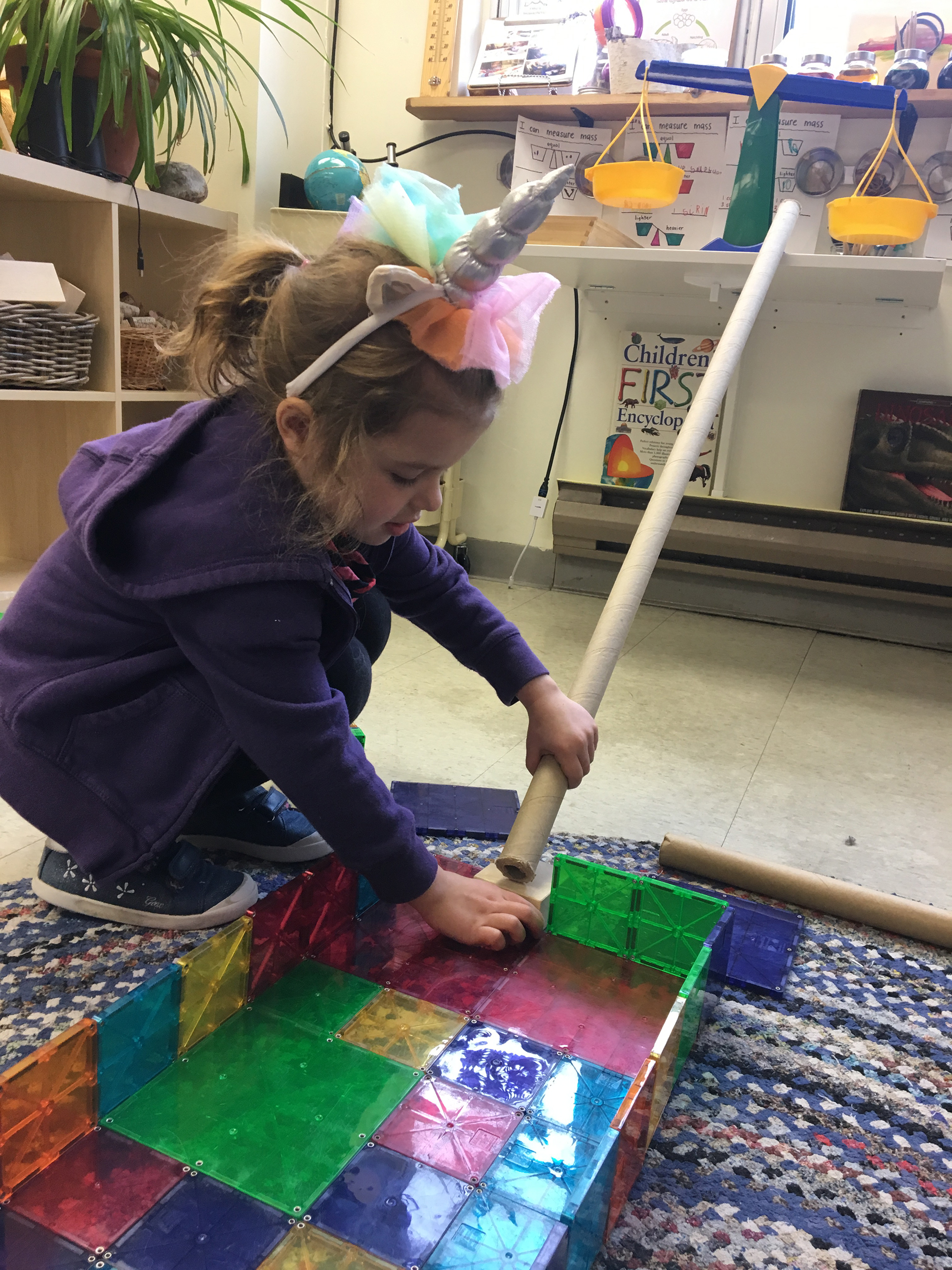 Inspired by AK's marble run earlier in the week, AB spends time at the Building centre working on her own version. She is challenged by the tube slipping along the magnatile base, but AB perseveres as she tries out different materials that might hold it in place. 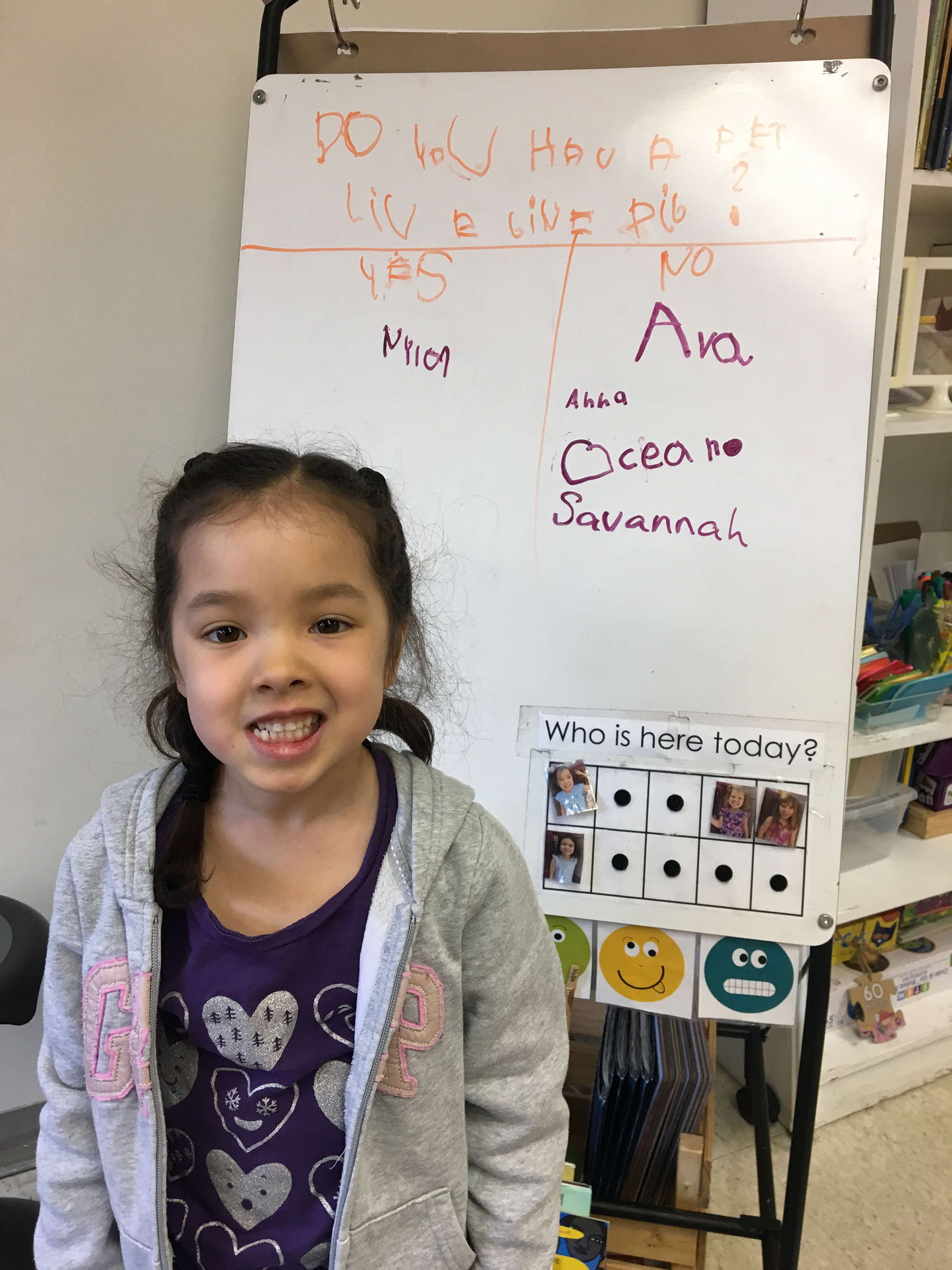 N is proud to share the morning question that she wrote today and excited to find out how her classmates will respond. Her question reads: "Do you have a pet live guinea pig?". 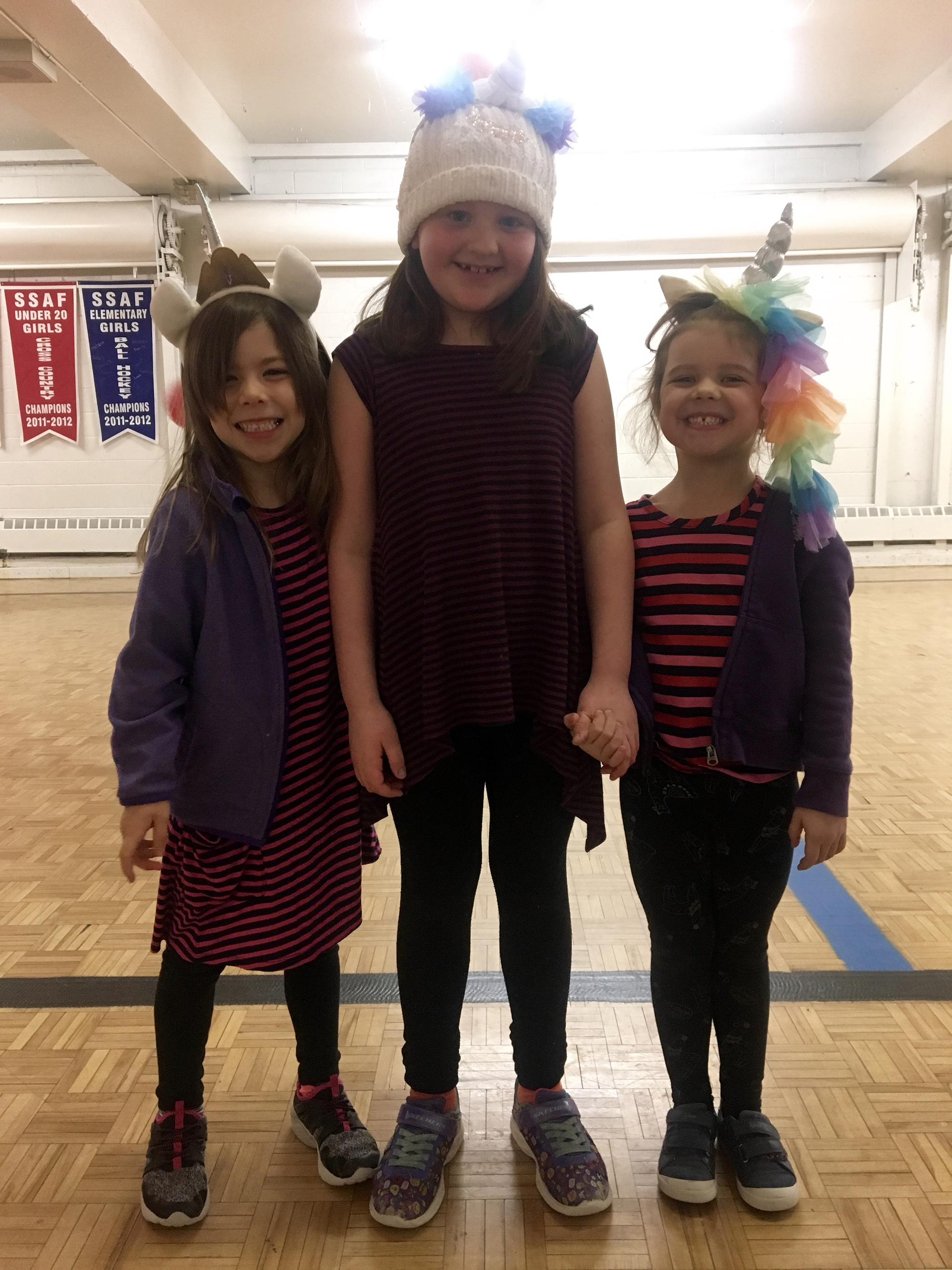 AK, C (grade 2), and AB are a set of triplets in unicorn headbands and stripes on Twin Day. 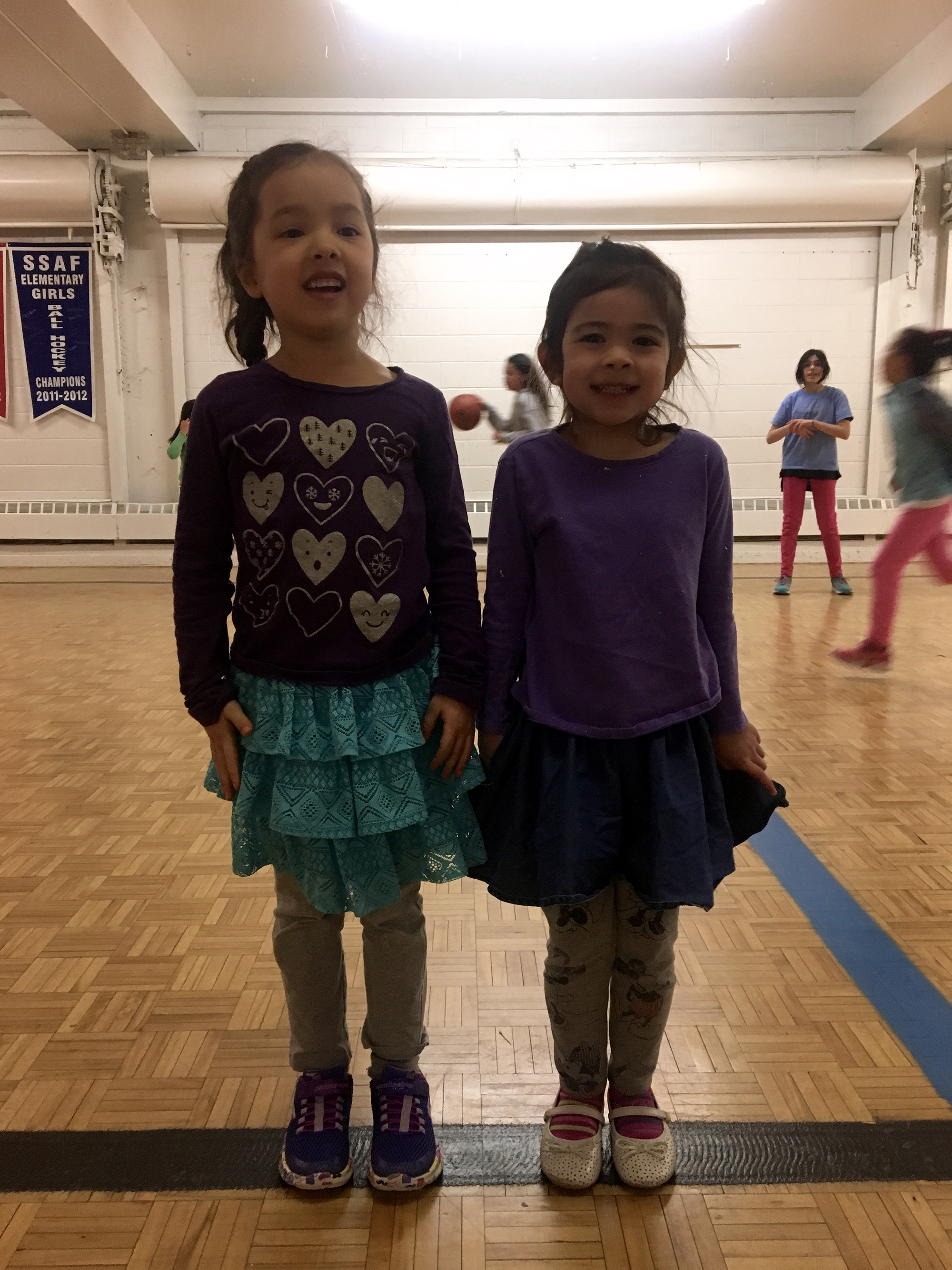 N and O are also dressed as twins today, and these girls planned out their outfits methodically: a purple shirt, a blue skirt, and grey pants. I can barely tell them apart! 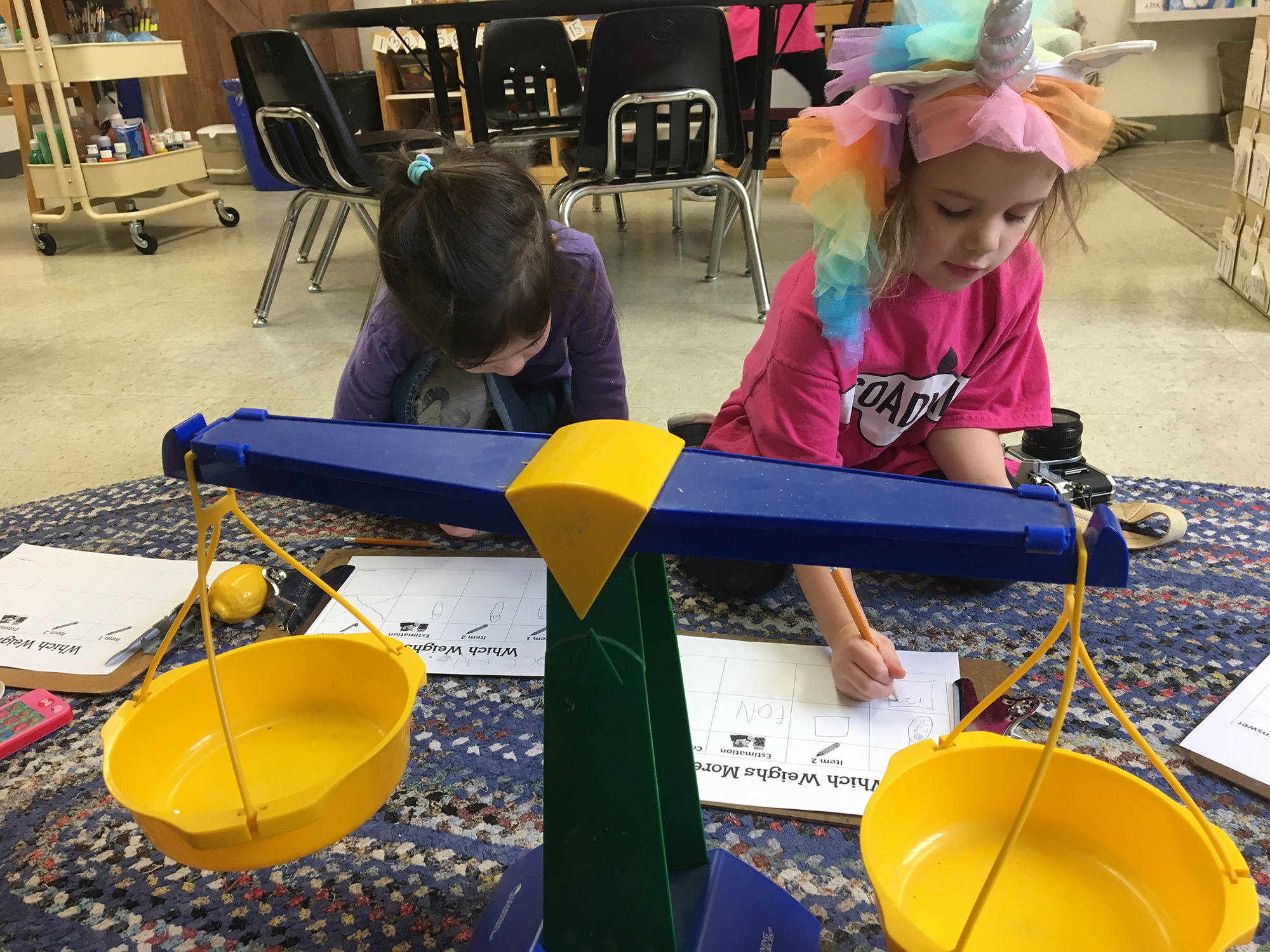 O and A make predictions about which of two objects will weigh more, or have a greater mass. We are combining our math and science skills of hypothesizing, making estimates, thinking about mass, making comparisons, finding equivalence, and more. 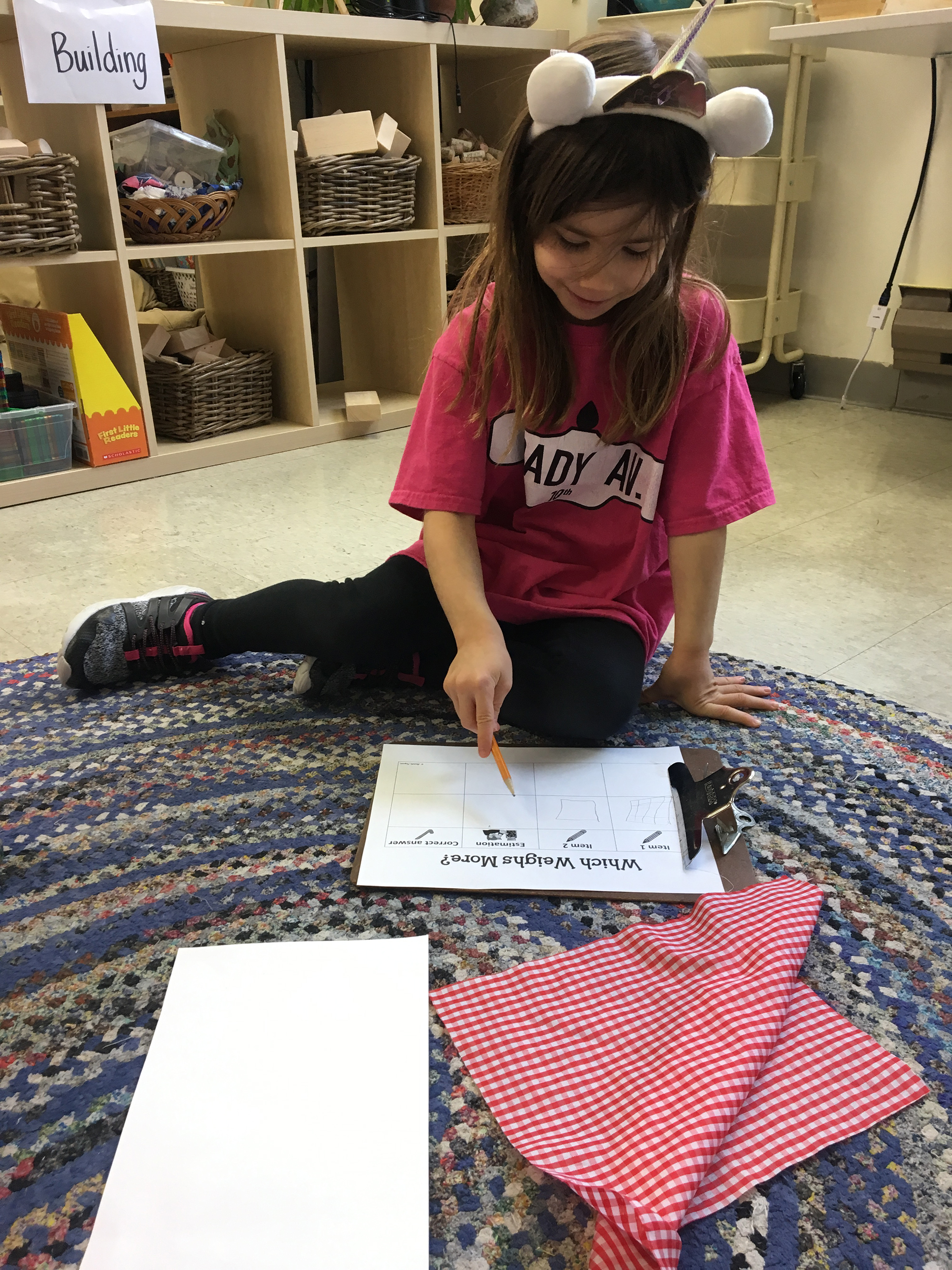 After having success with her predictions, A challenges herself with two objects that feel like they have a very similar mass. She is trying to figure out which material will weigh more so she can draw it in the "estimation" space. 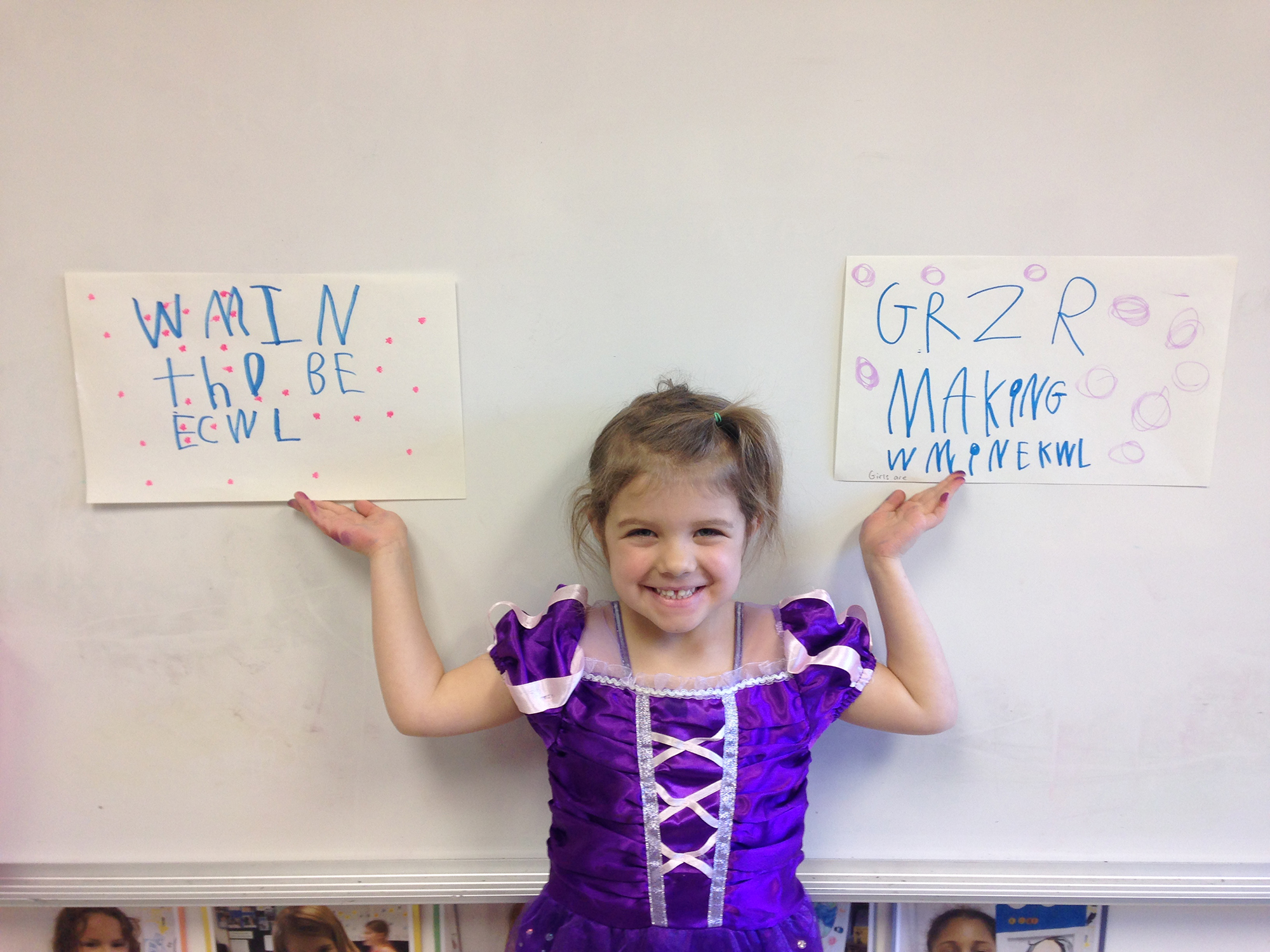 This year's IWD theme is "Balance". During Art class, Tonja encourages the girls to think about things that balance around them. A's posters read: "Women should be equal" and "Girls making women equal". 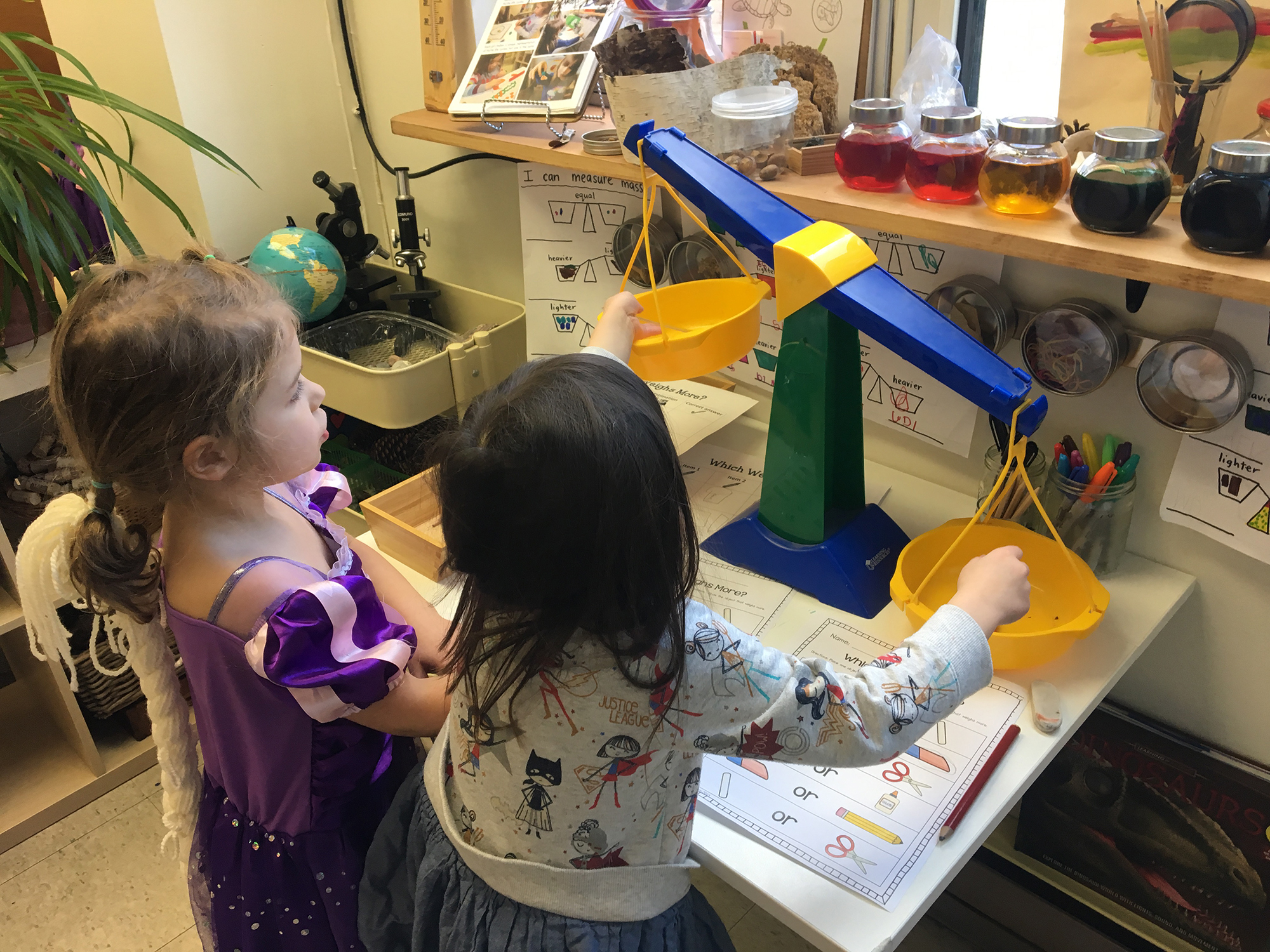 O and A experiment more with mass and making comparisons between different objects. They are working their way through a list of different school supplies and figuring out which has a greater mass. 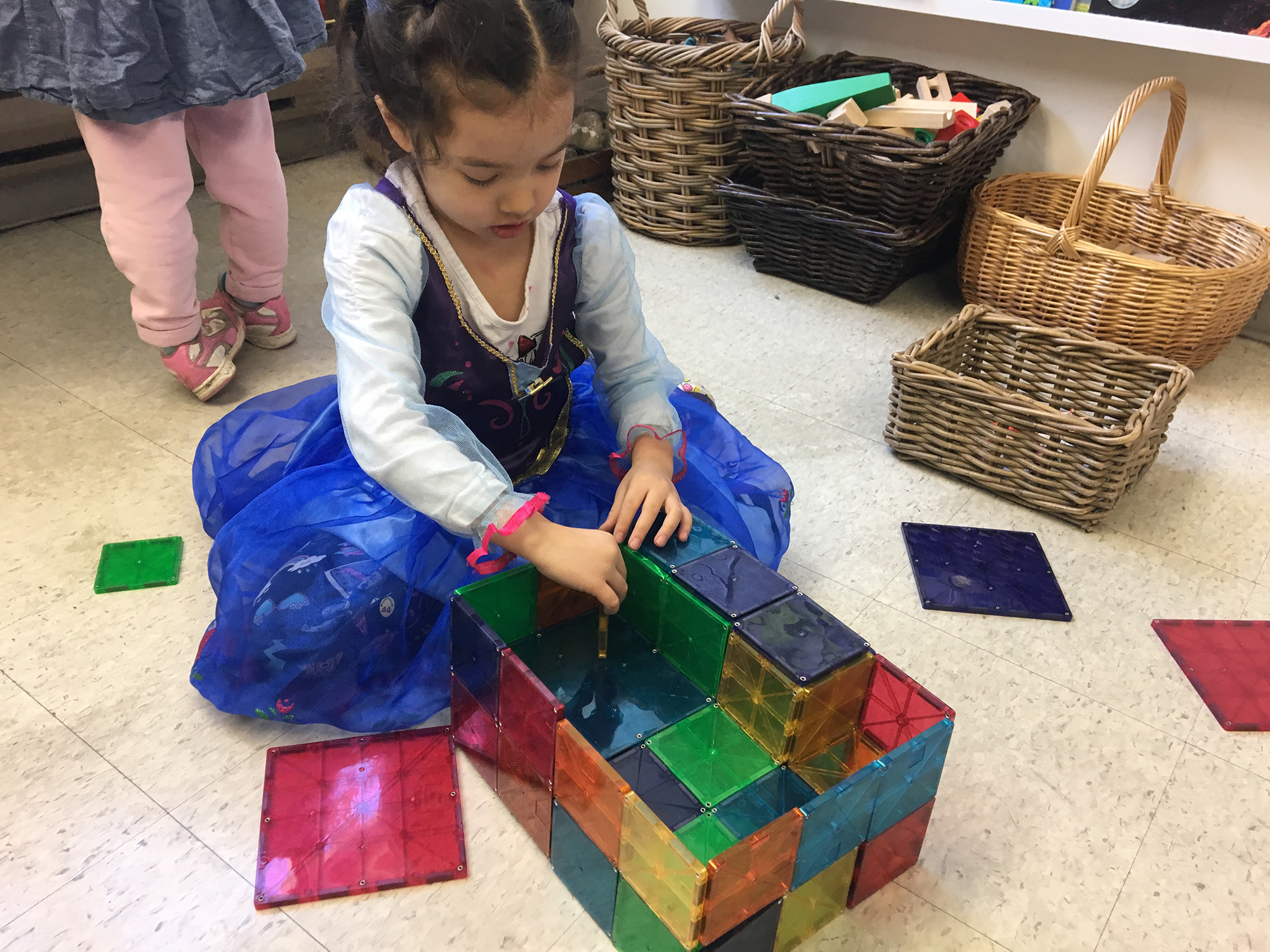 N is building a two-storey school and finds a creative way to build classrooms into the interior. She experiments with adding more rooms, but quickly realizes that the smaller magnatiles will not connect to the larger magnatile because there are no magnets running down the middle of it. 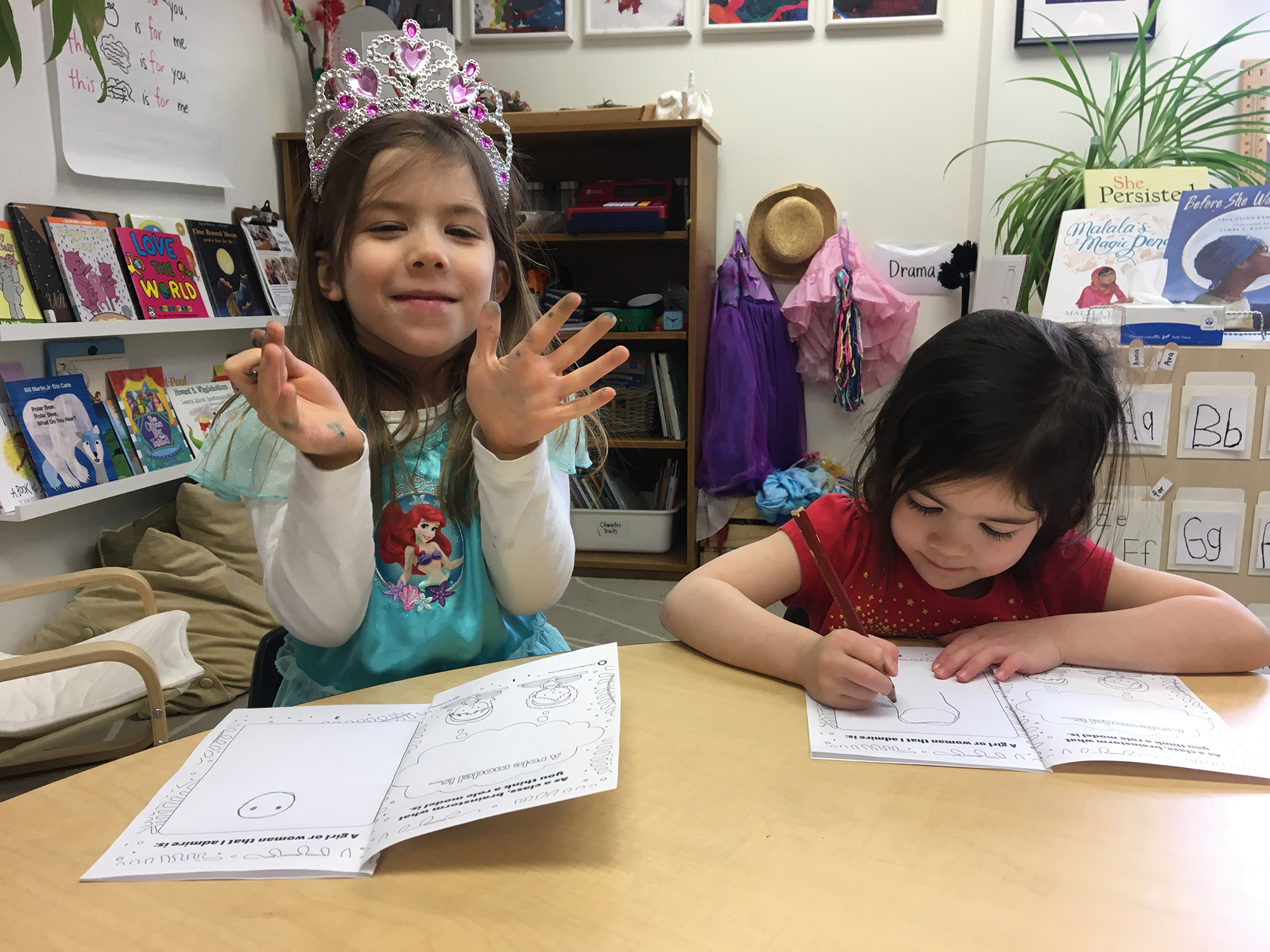 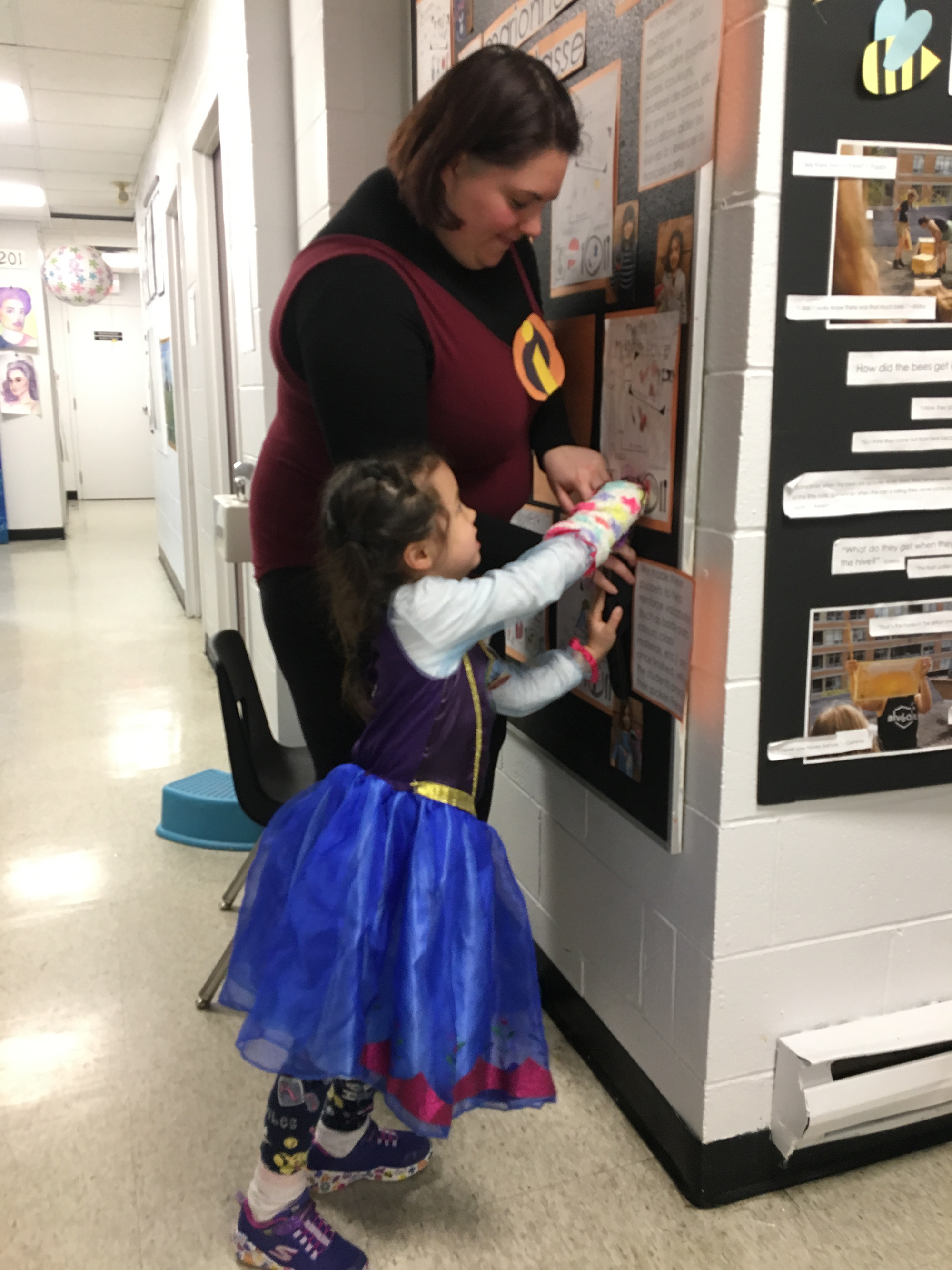 N helps Ellen put up the information about her "marionette" that she has completed in French class. The Early Learners and Grade 1-2s are so proud of the French-speaking sock puppets that they designed, named, and practiced their French with. 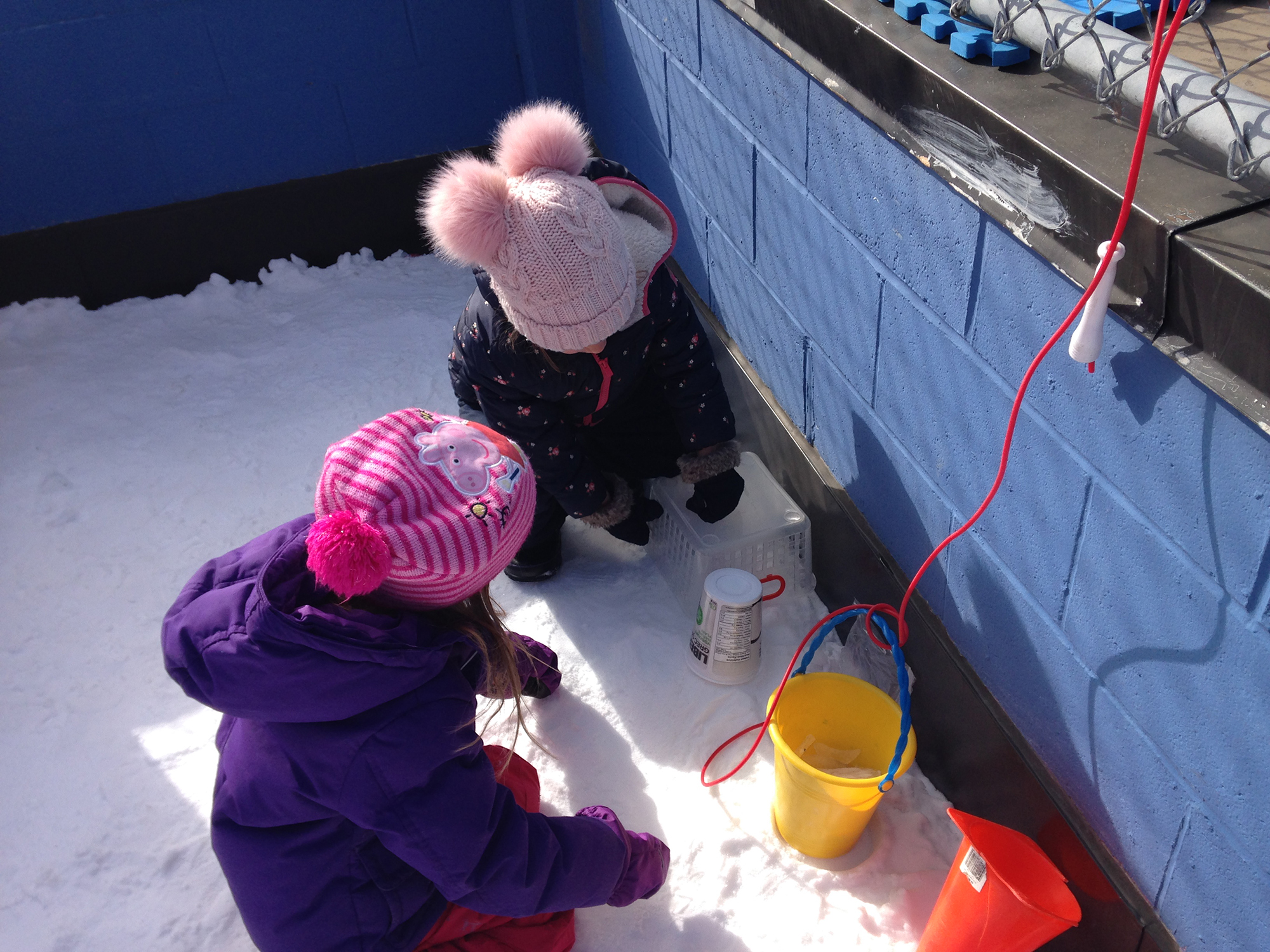 AB and AK spot animal tracks on the external roof while outside yesterday afternoon and the two of them decide to make a trap to catch the mystery animal. This morning they check their trap, but are disappointed when they do not find an animal. 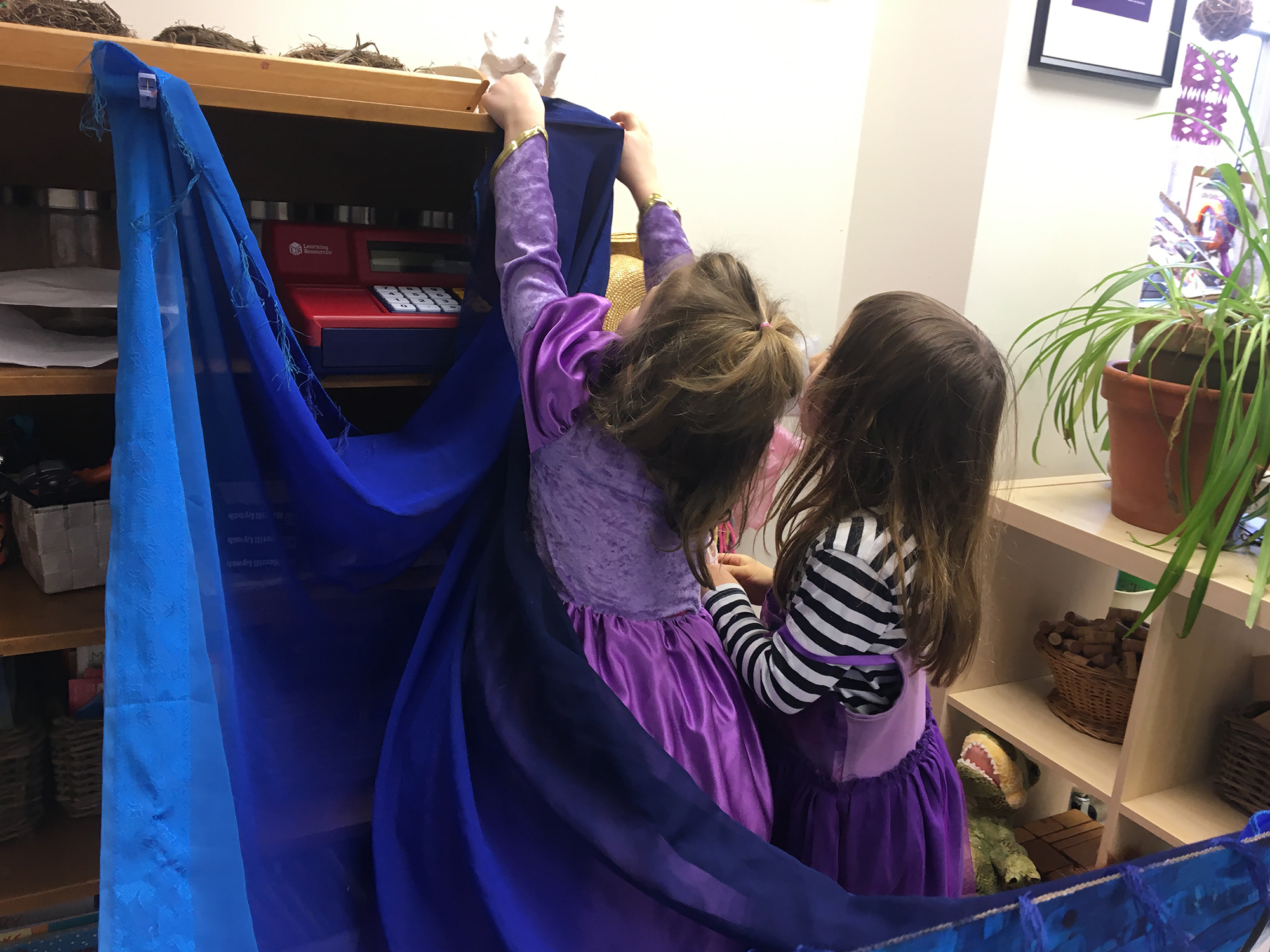 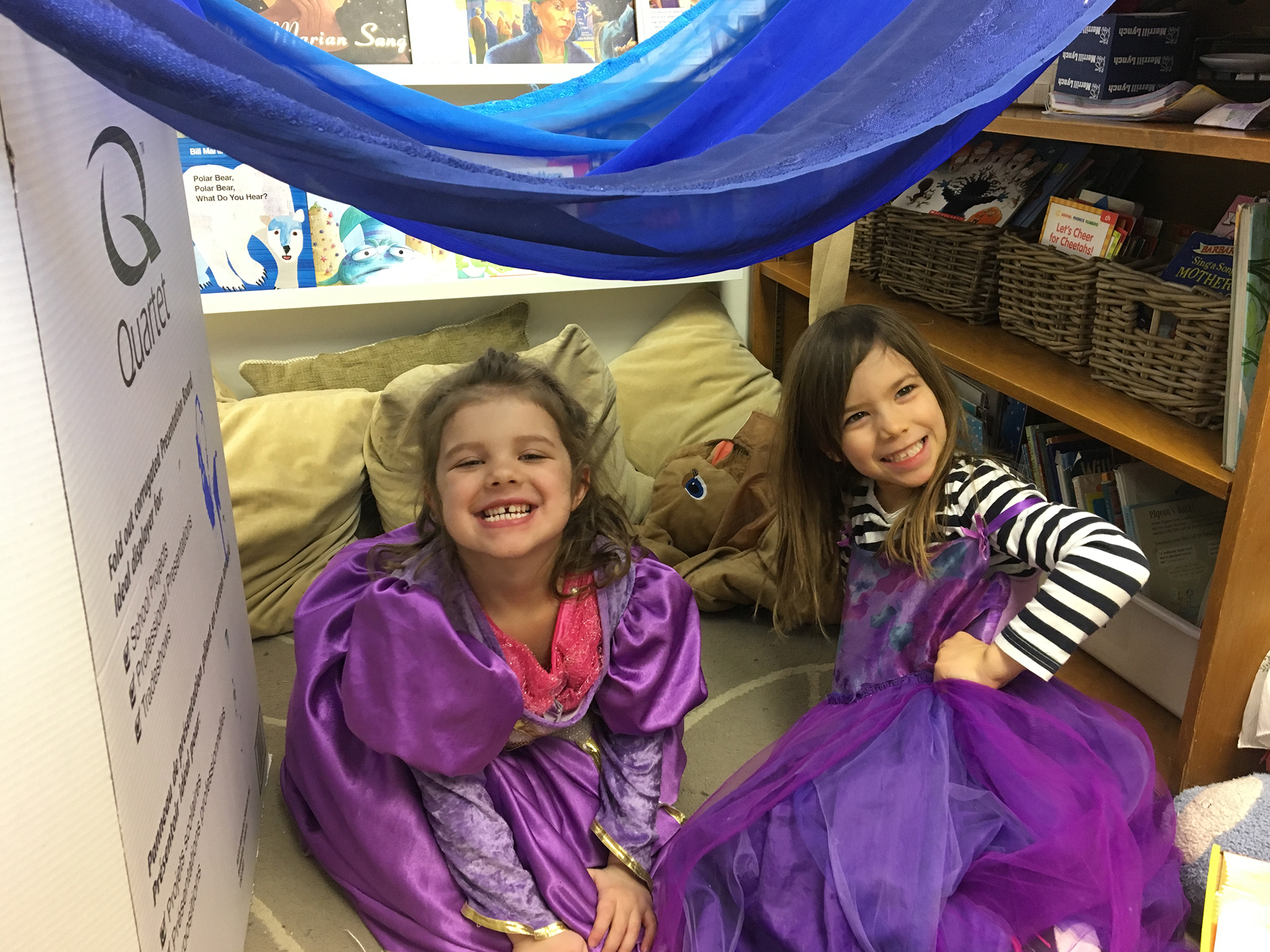 AB and AK use their imagination and collaborative skills to set up a den / fort / house in the Drama centre. Life is good when you've got a beautiful roof over your head. 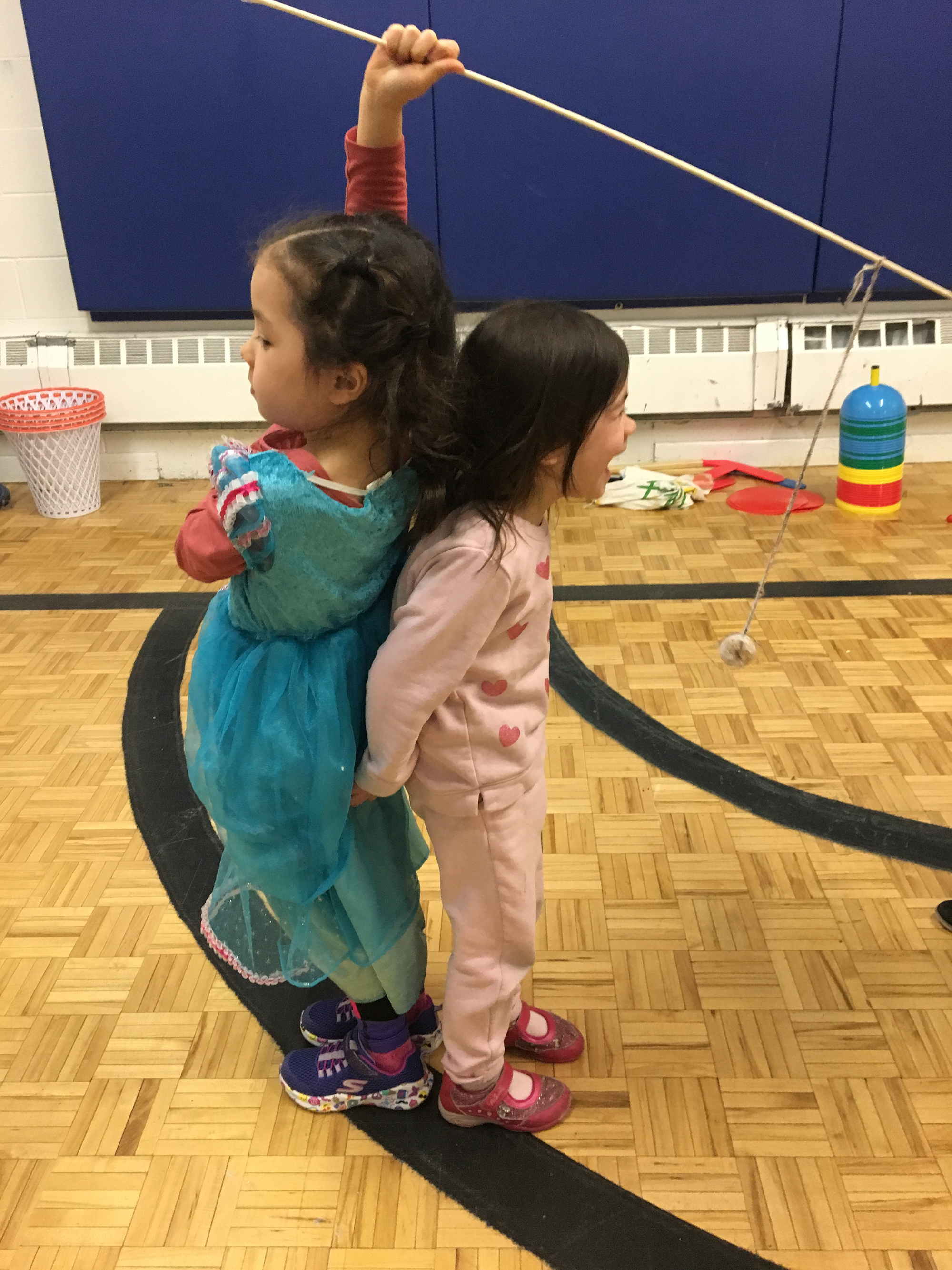 N and O participate in the "fishing for marshmallows" activity during the "Disney Olympics" during spirit week. O tries her best to eat the marshmallow off of the string using only her mouth while N controls the fishing rod for her. Great teamwork! 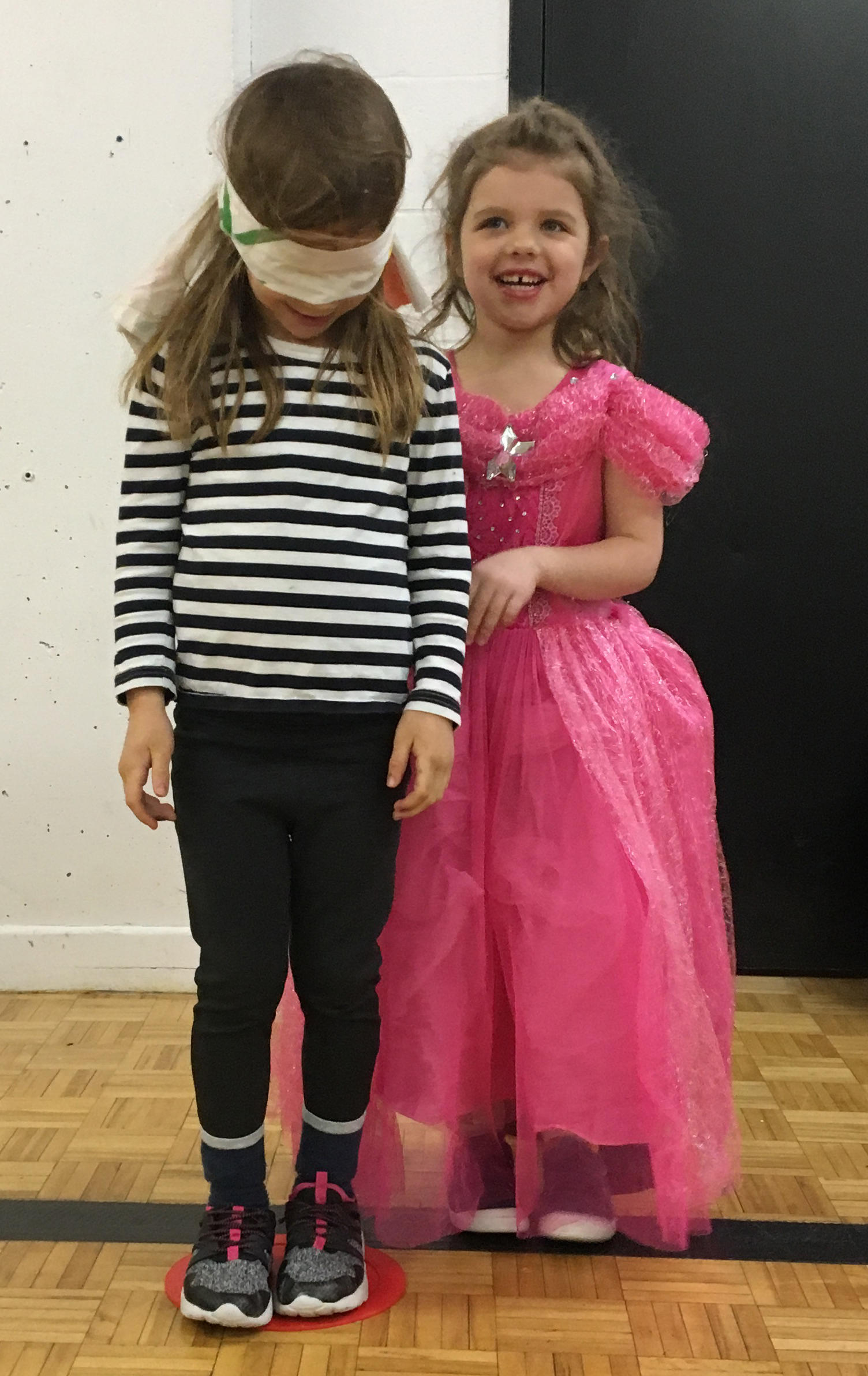 AB is all set to guide AK through an obstacle course during today's All School. Each class gets to send different students to participate in each event, and the Early Learners are excited to be having fun alongside their older peers. 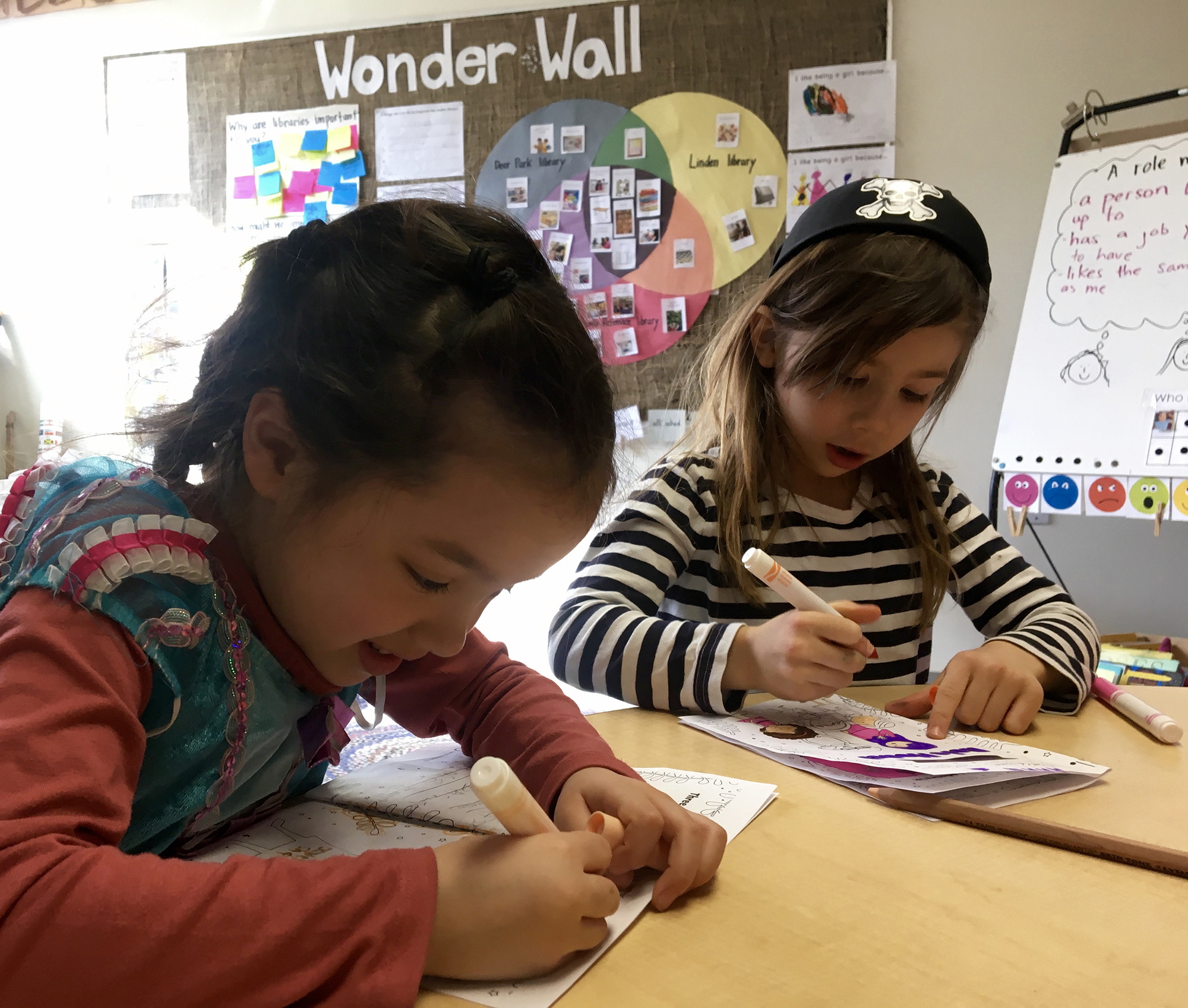 N and A continue adding details to their Role Model booklets during Writer's Workshop. They seem to be taking such care to make their learning look beautiful because they are writing about important people in their lives. 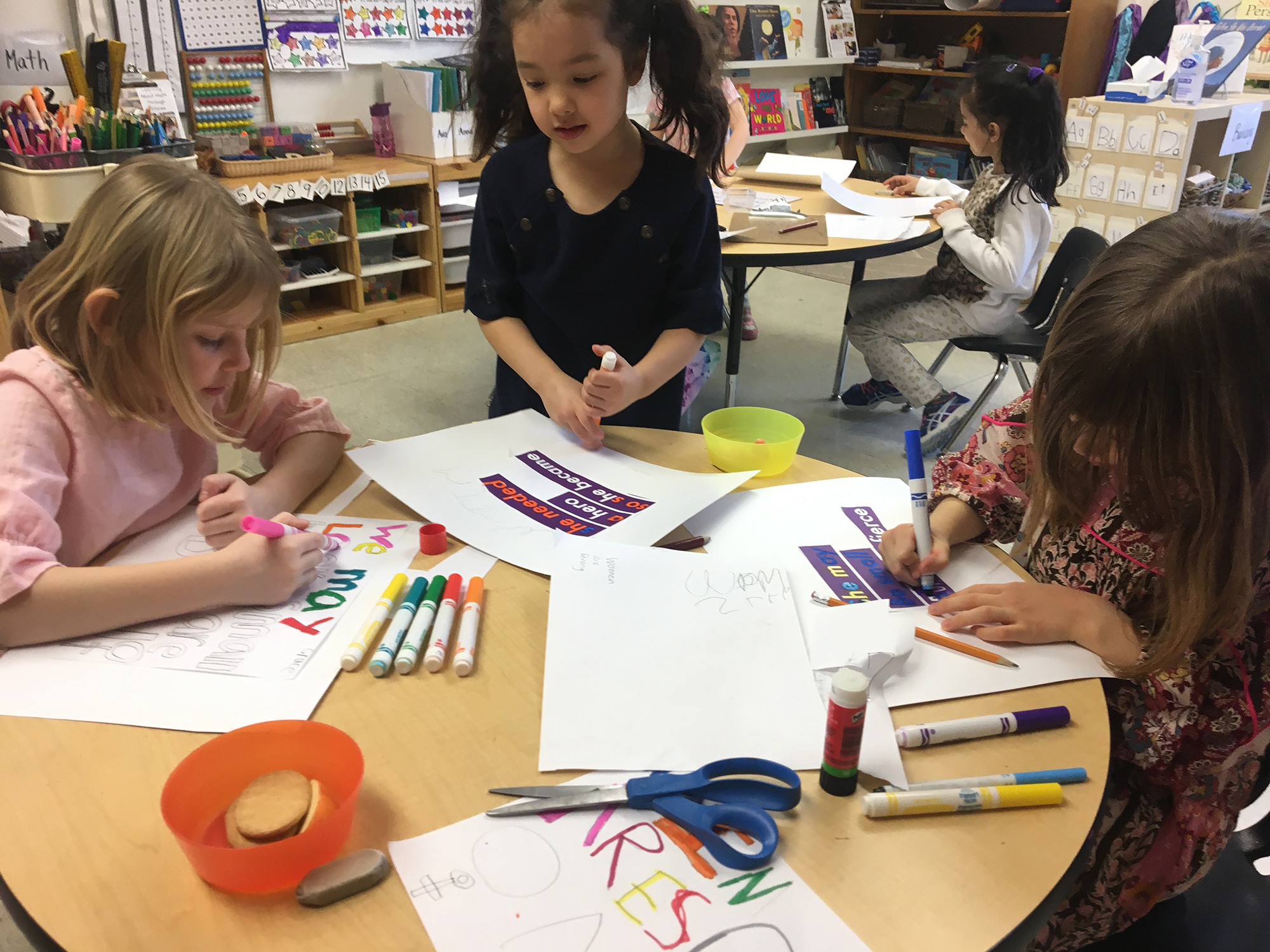 Today is International Women's Day and we are excited! The girls are making signs for Linden's women's march later this morning with empowering messages and chants to share with the community. 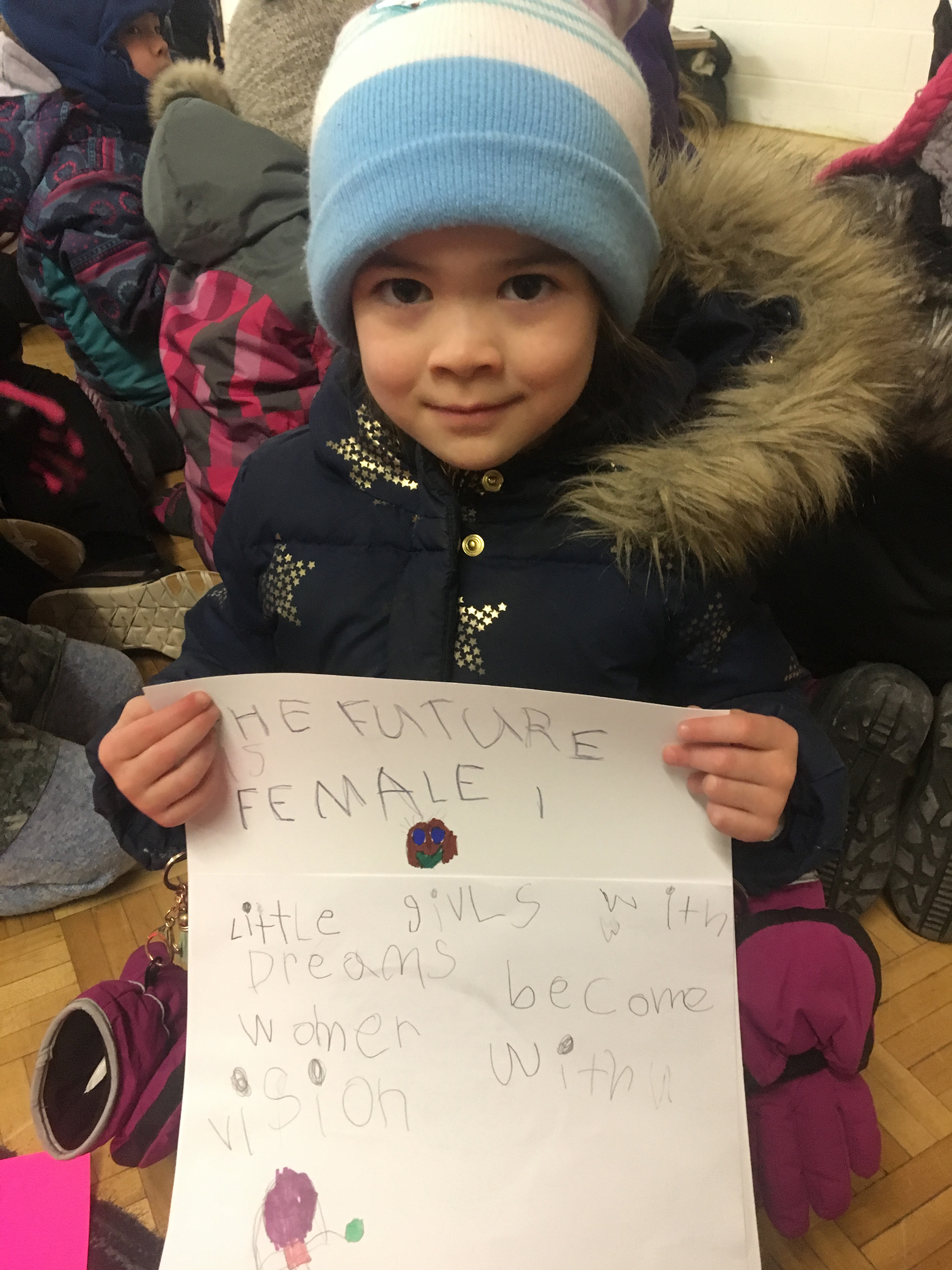 O shares her sign for the IWD march with me before we head out to the streets. 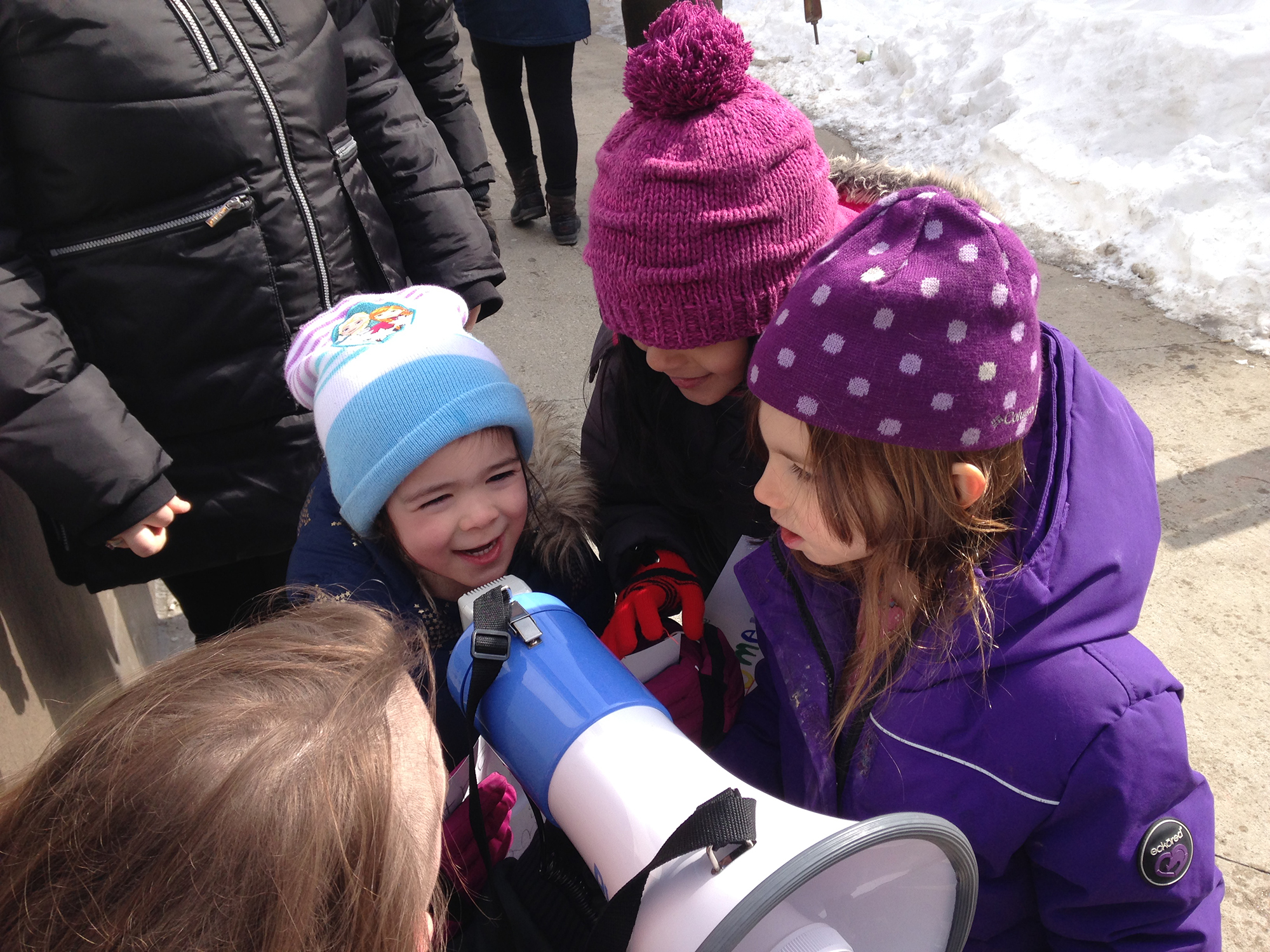 O learns how to use a megaphone during Linden's women's march and is confident leading cheers for the group. You are never too young to empower others and speak up for what you believe in. 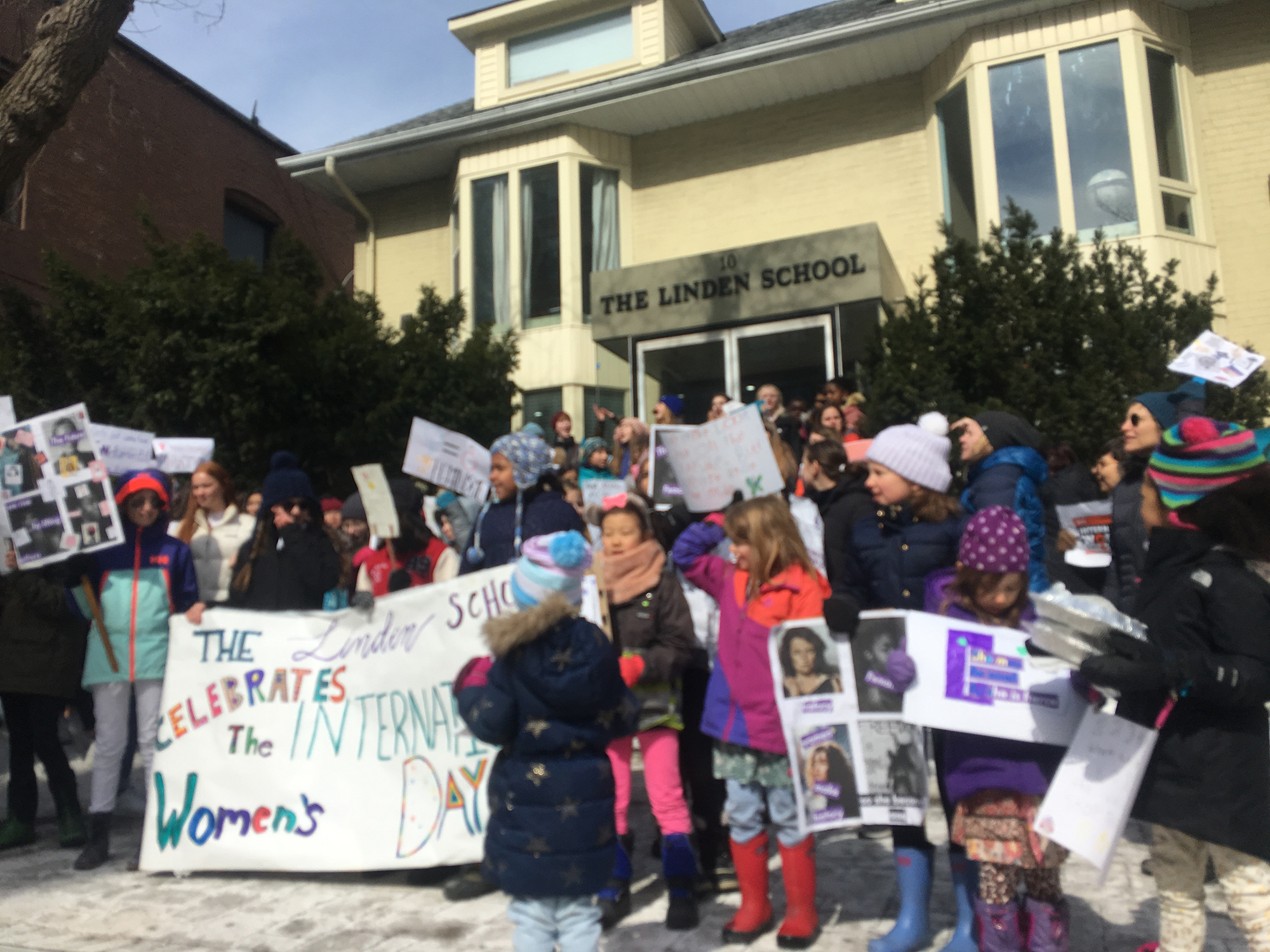 Happy IWD to all from our courageous, strong, brave, and incredible community at The Linden School! 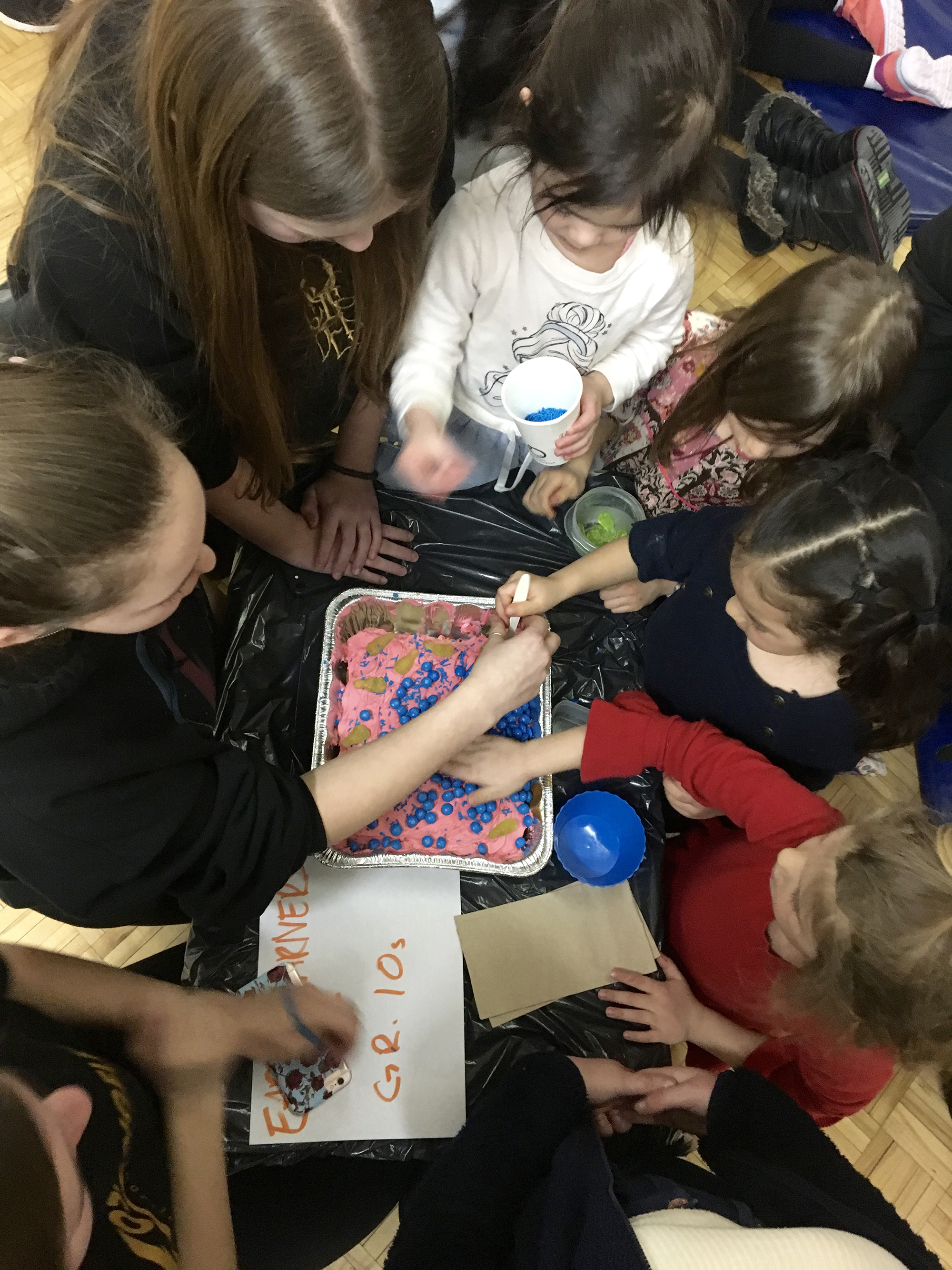 After an exciting game of Linden Jeopardy, with cake toppings given instead of points, the Early Learners and Grade 10s team decorates their cake before digging in. Thanks to the Grade 10 students for helping the younger girls stay engaged throughout the game.