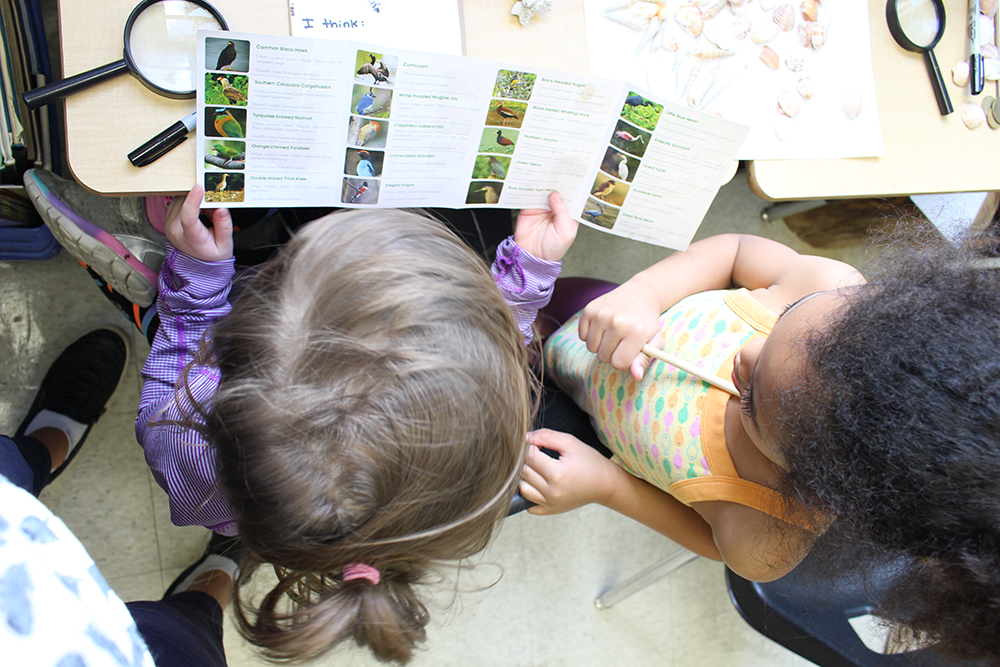 As we come back from March Break, we welcome a 6th student, K, to our classroom. We are so excited that she has joined us for the final term before summer. The girls love showing her the ropes of being an Early Learner at Linden, and it already feels like she's been with us for months! This week we are starting some new inquiries and explorations, which will grow throughout the term based on where the girls take them. We are starting to think about plants - what we know about them, what we are wondering, and why they are important. Some new materials have made their way into the classroom over the March Break and the girls are excited to integrate them in their learning. Take a look at what we got up to this week: 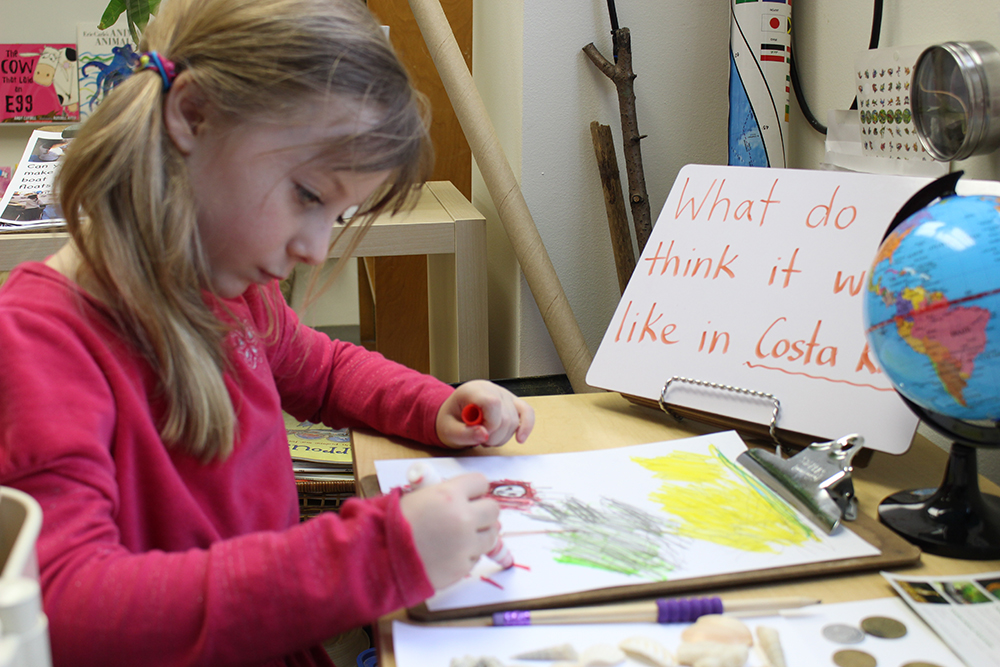 Over my March Break, I spent some time in Costa Rica with my family. I brought back some shells, as well as some extra Colones to share with the girls. S is working in the Nature Centre to draw a picture of what she remembers Costa Rica to be like from a while ago when she travelled there. She remembers that it was so sunny that the sun made the whole sky was bright. 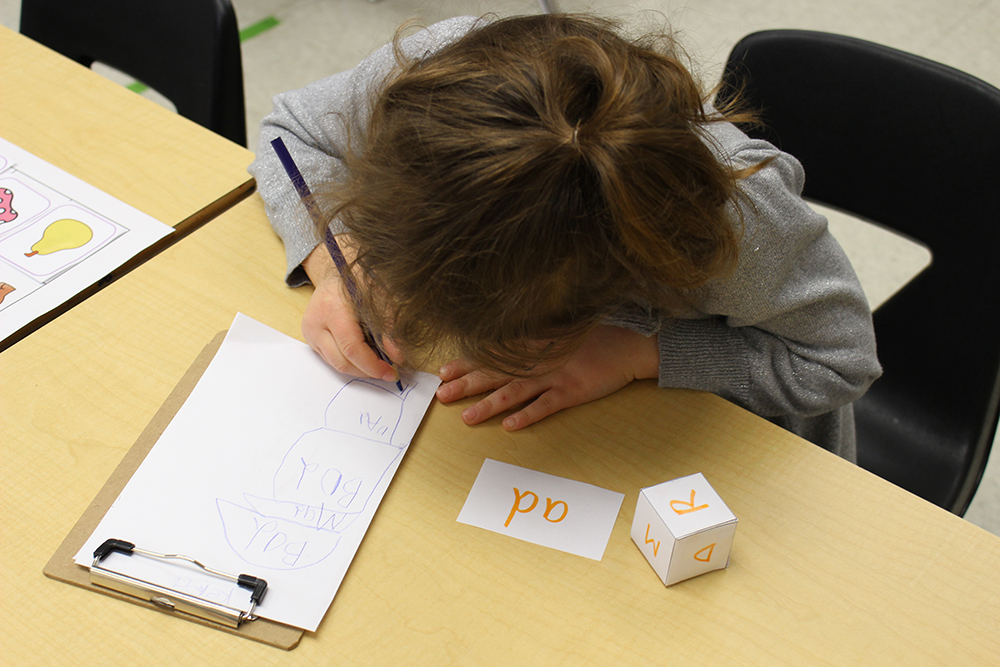 K is rolling the consonant die to practice writing words in the "-ad" family.  She is staying organized as well! 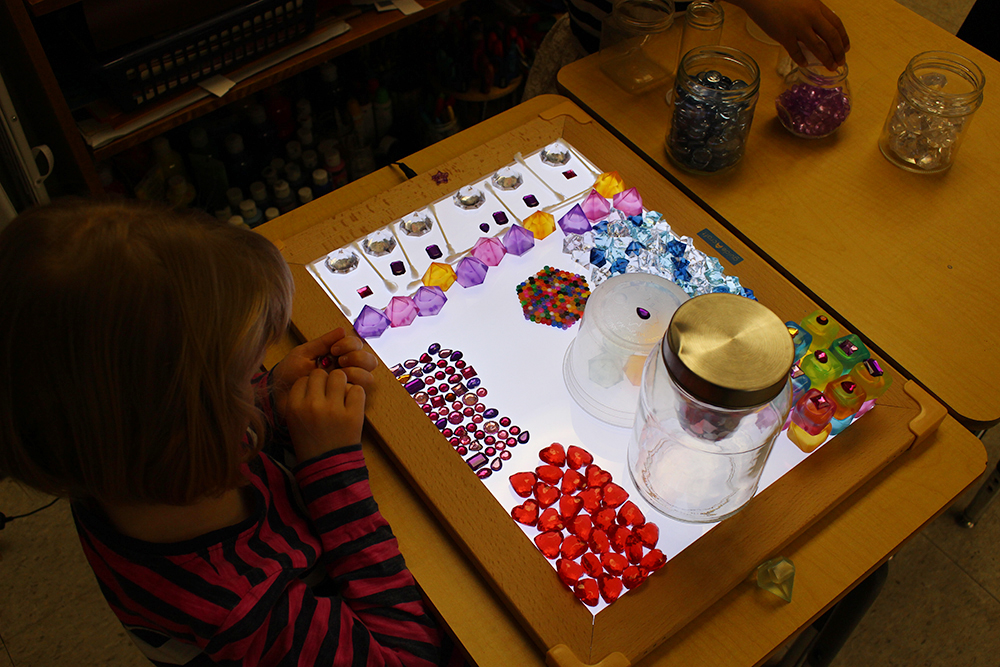 G is collaborating with Z on a light table design. When I checked in with them, G was carefully lining up gems and they look stunning. She has developed quite the eye for design and precision. 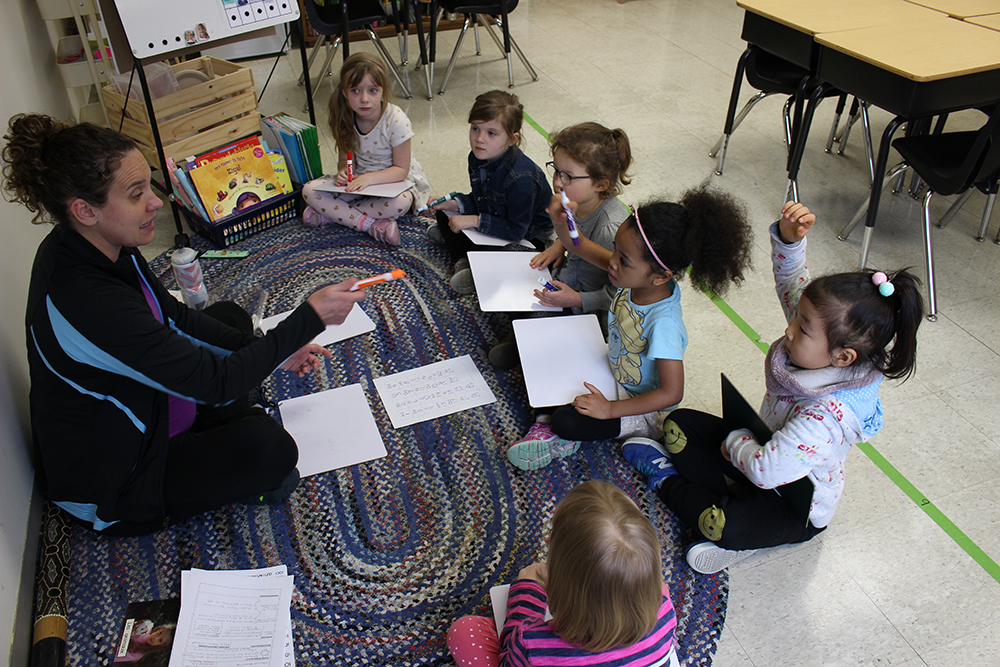 French/music class is back in action after the break. What better way to review letters, numbers, animals, and more than with markers on practice boards! 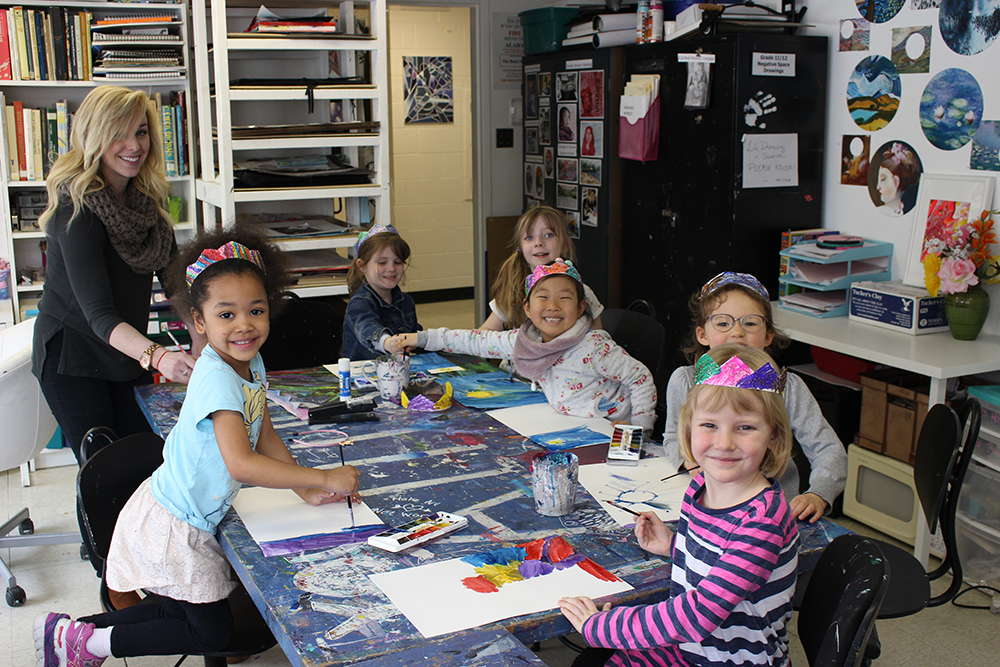 To celebrate G's 7th birthday, which happened over March Break, the girls made special crowns in art with Brie. Who doesn't want a colourful crown that is covered in glitter? 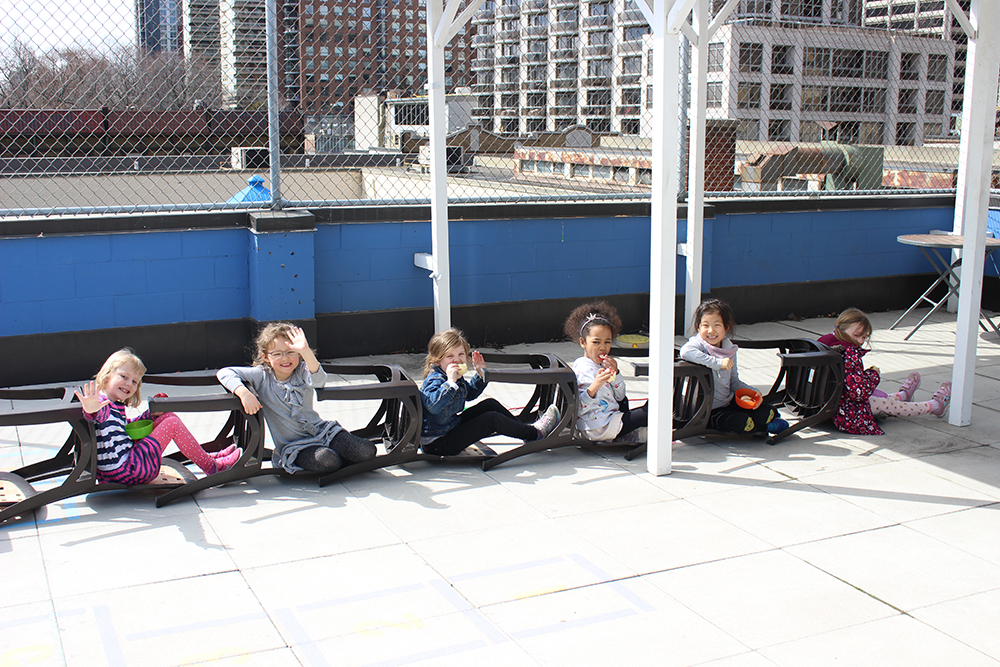 We are enjoying the spring weather on the roof for an extra recess today. G pulled a bunch of the chairs together to create a train/airplane. I was told that they are all flying to Tokyo! 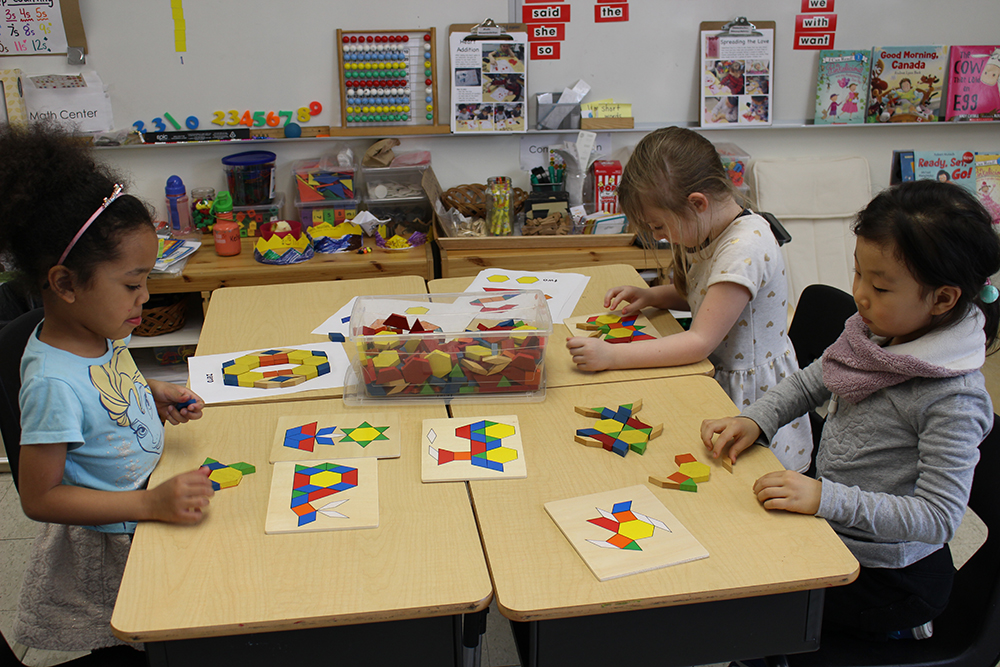 This term our big focus in math is on spatial sense. Z, M and S are all working at the Math Centre with pattern blocks. They are looking at the arrangements of the pieces, and navigating piecing the shapes together on top of or below the templates. Z even comes up with a story to go with all of the different pictures she makes. 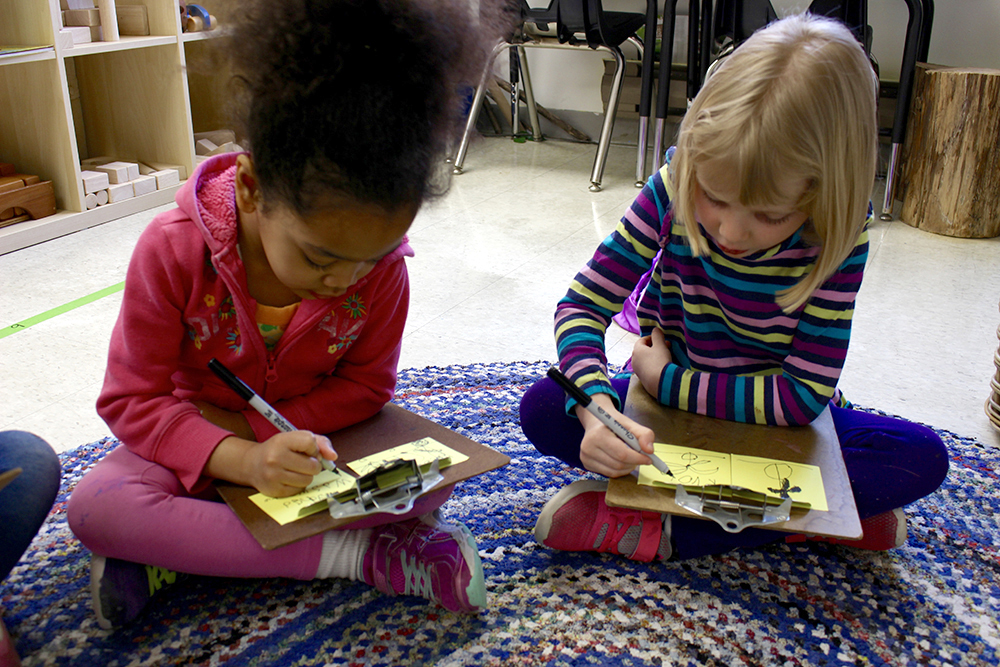 To kick off our plants inquiry, I wanted the girls to both draw a plant that they know of, and to write something they know about plants. Our conversation covered oxygen production, pollination by bees and butterflies, fruits and vegetables, under- and over-watering plants, and how they "drink" water from the soil. It seems like many of the girls are already very knowledgeable in this area, which will make depending our understandings even more exciting. 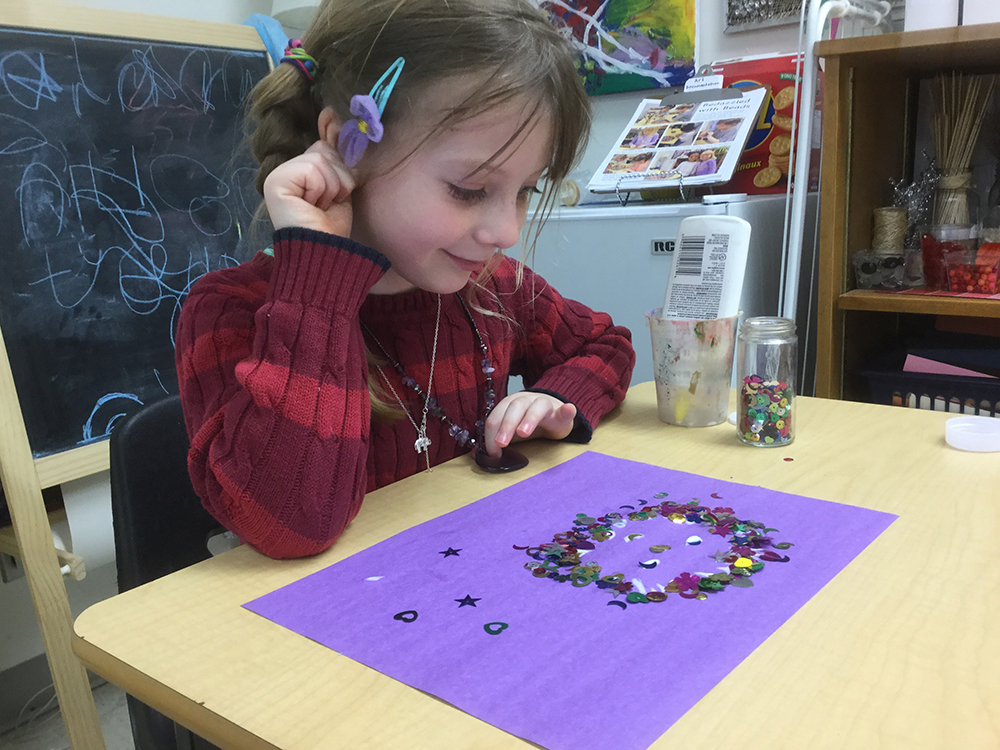 S admires the finished artwork she has made. First she lay out all of the sequinned shapes to make sure she knew where she wanted them to go, then part by part she glued them down. 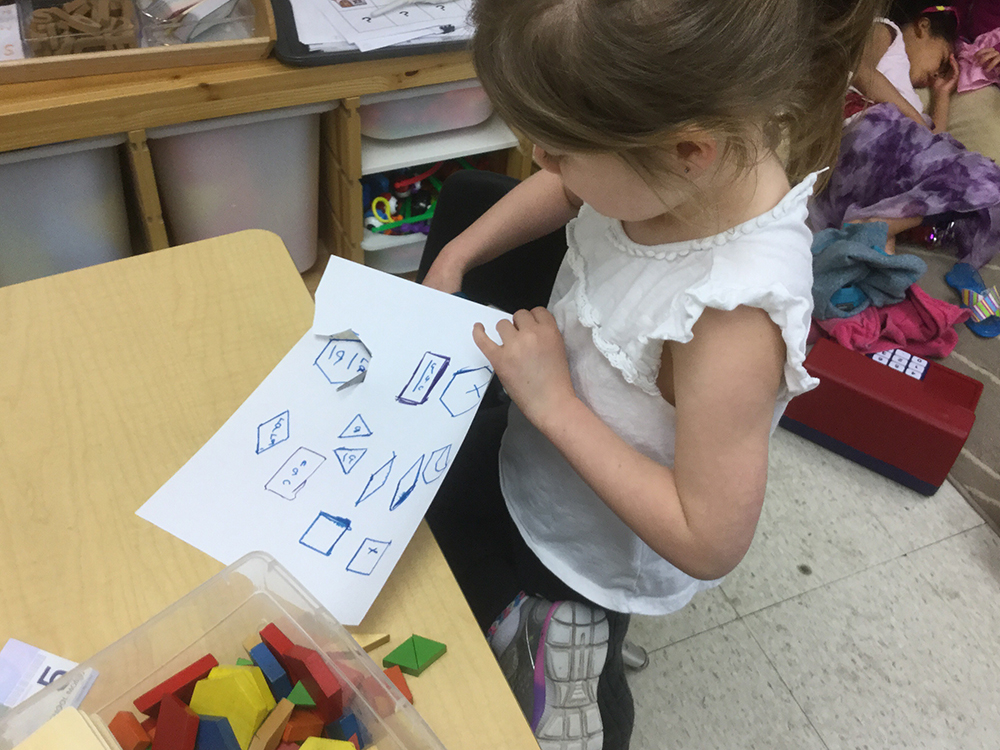 G spends her time at the Math Centre tracing different shapes and adding letters to them. She chooses to cut them out, and then ends up storing them in a plastic bag for later use. 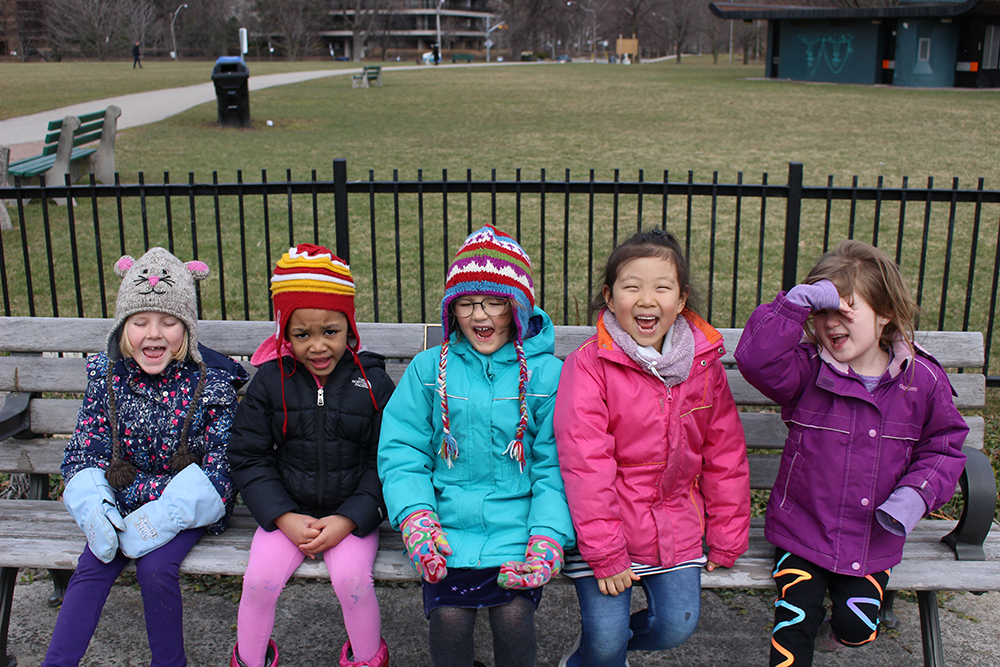 Happy to be outside on this beautiful day. 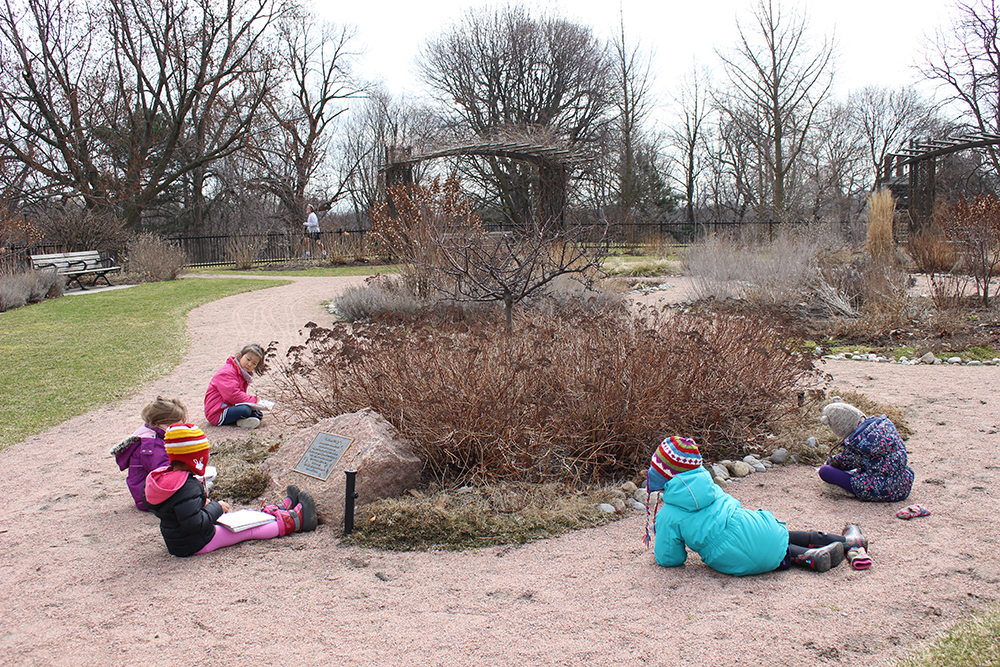 We are visiting the "no dogs allowed" part of the park at the end of the road to sketch some plants. Despite there being very little greenery, the girls are curious about the plant in the middle, which they all decide to focus on as they sketch. 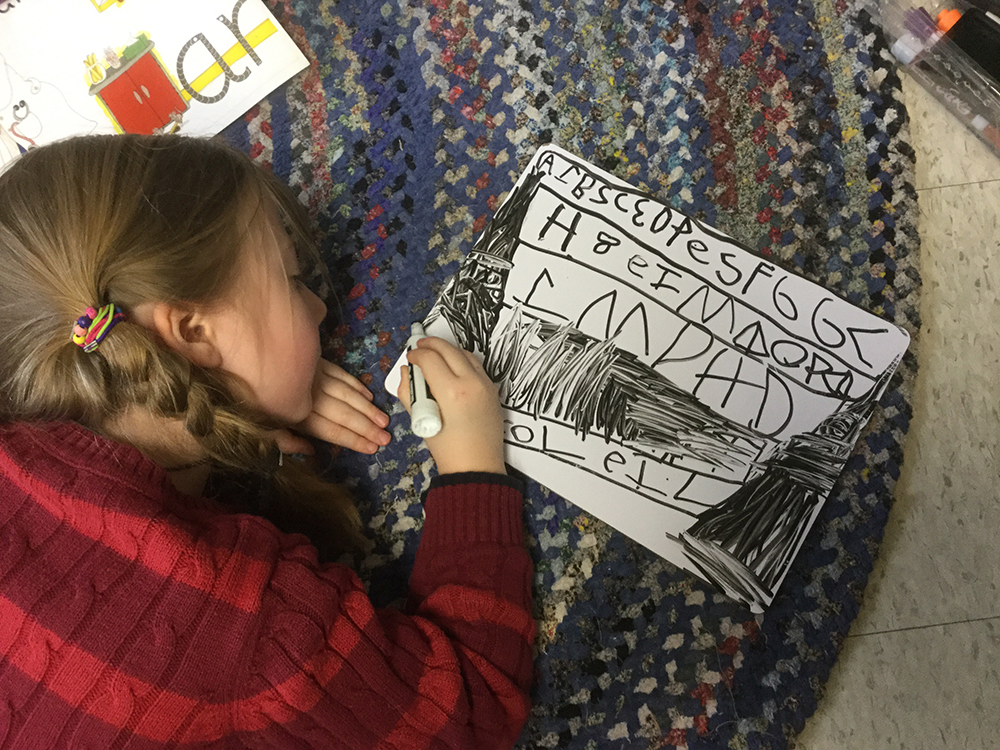 S writes out a secret code after she has finished with her writing in Writer's Workshop. Her code uses both letters and numbers, jumping back and forth in a pattern. She tells me that the symbols that look like triangles on the second line are arrows that make the code jump up to the previous line. S is connecting her literacy and math understandings with the new learning about coding that we have done together lately. 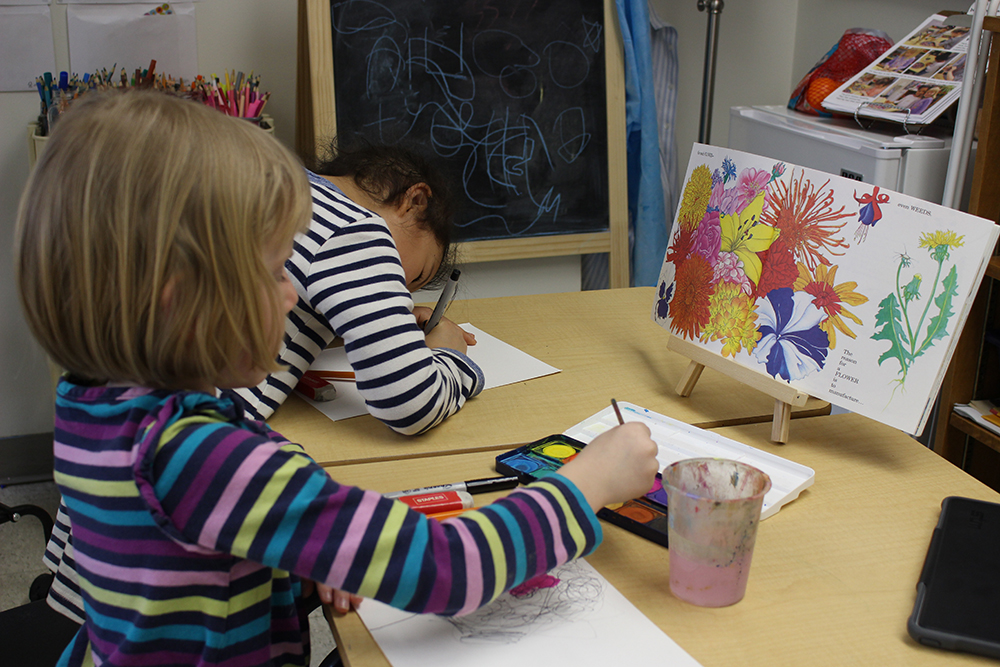 M and G draw and paint in the Art Centre, inspired by a book with vivid illustrations of many different varieties of flowers. G notices that the rose petals "go around and around", so uses a spiral motion to help draw this arrangement. 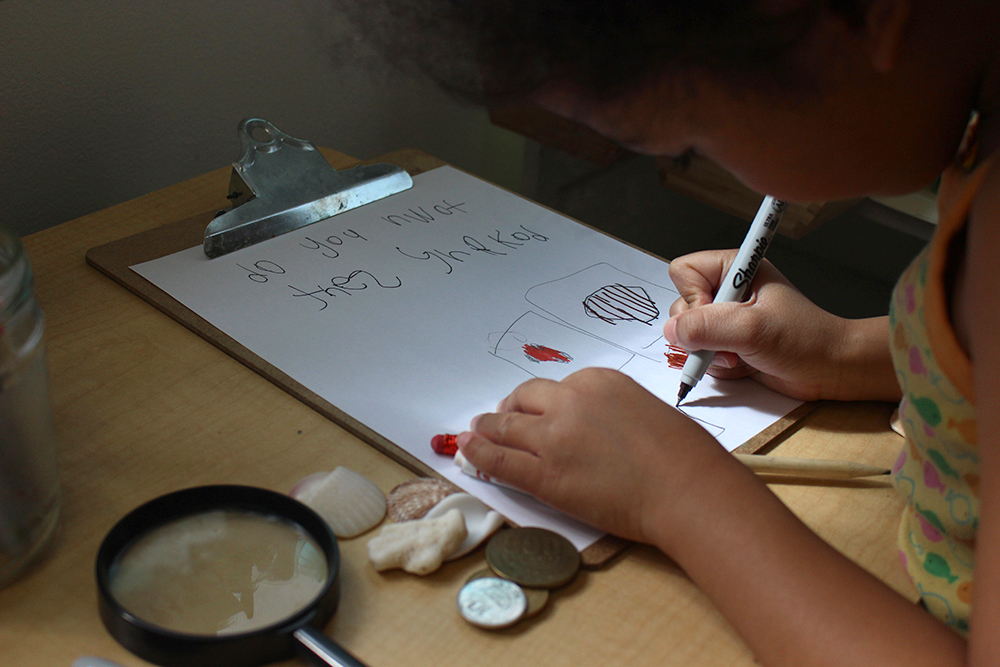 Z draws on her experiences from Social Justice Data Fair, and chooses to create a survey at Nature. She is asking her friends "do you know what these are called?". She has chosen a mixture of objects, some from the materials in the Nature Centre and some from Costa Rica. 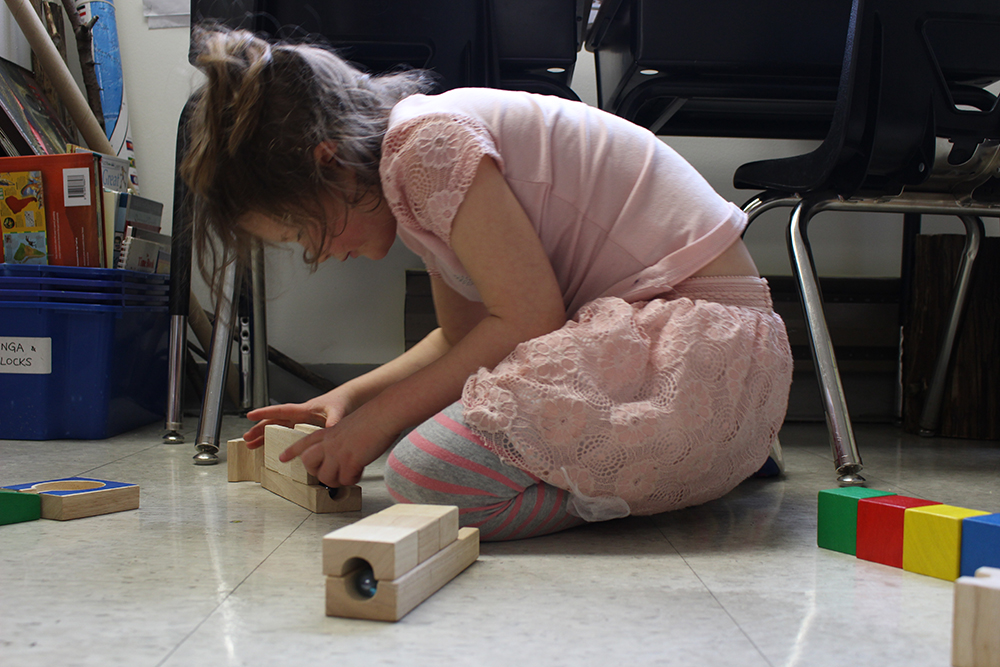 K has created this elaborate story about her marbles being naughty at school, and having to be put in these jail tunnels to keep them put. She carefully arranges the marble tracks so that the marbles will fit inside, but not be able to come out. 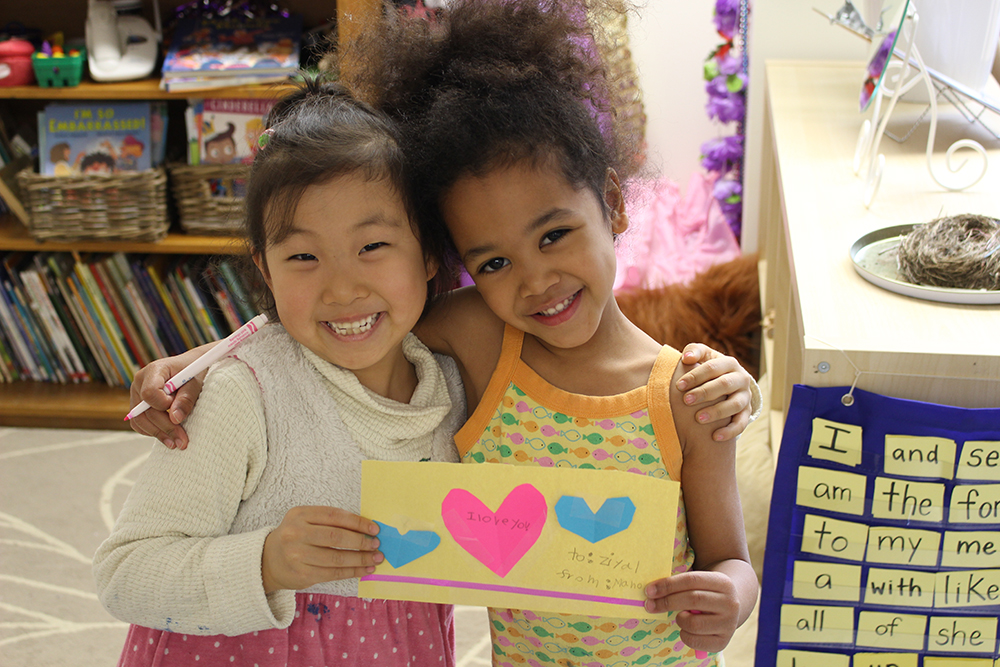 Lately, there has been a trend at the Communication Centre to create cards and/or write letters to each other. M has made this beautiful card with hand-cut hearts for Z. Such care was taken, and she even added ribbon to the bottom. 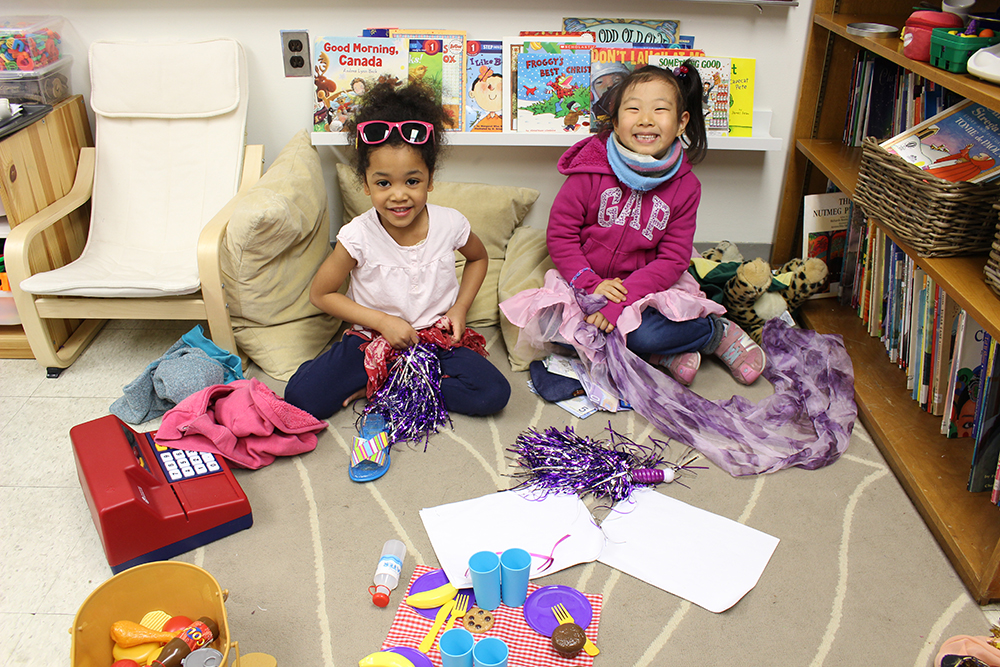 M and Z are having a picnic in Drama. At the same time, they are creating cheers together. 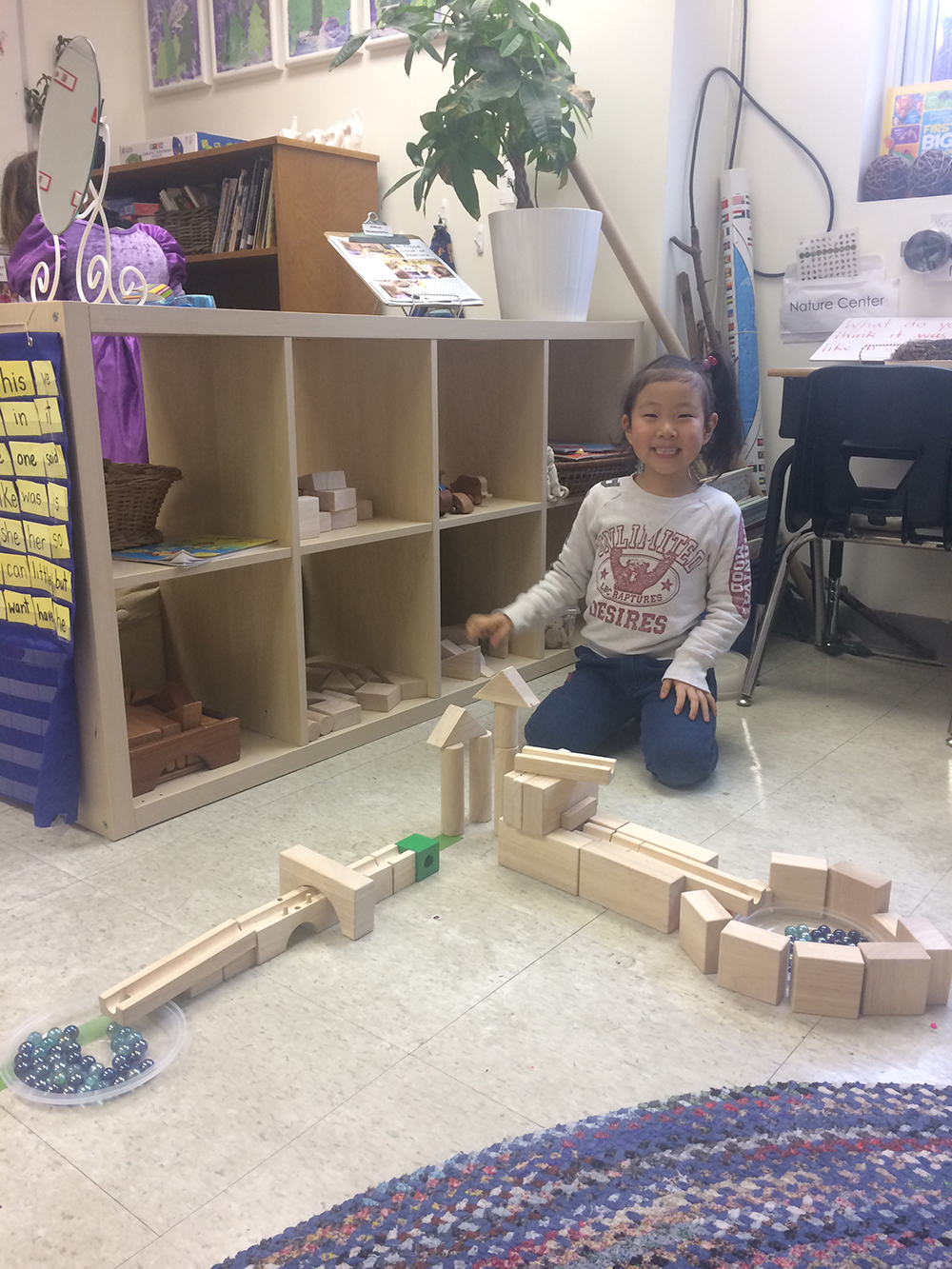 M shares this elaborate marble pathway with me. She wants them to race, and is measuring which one finishes first by the number of marbles in the end traps. My favourite part is the tall drop between channels on the righthand course.