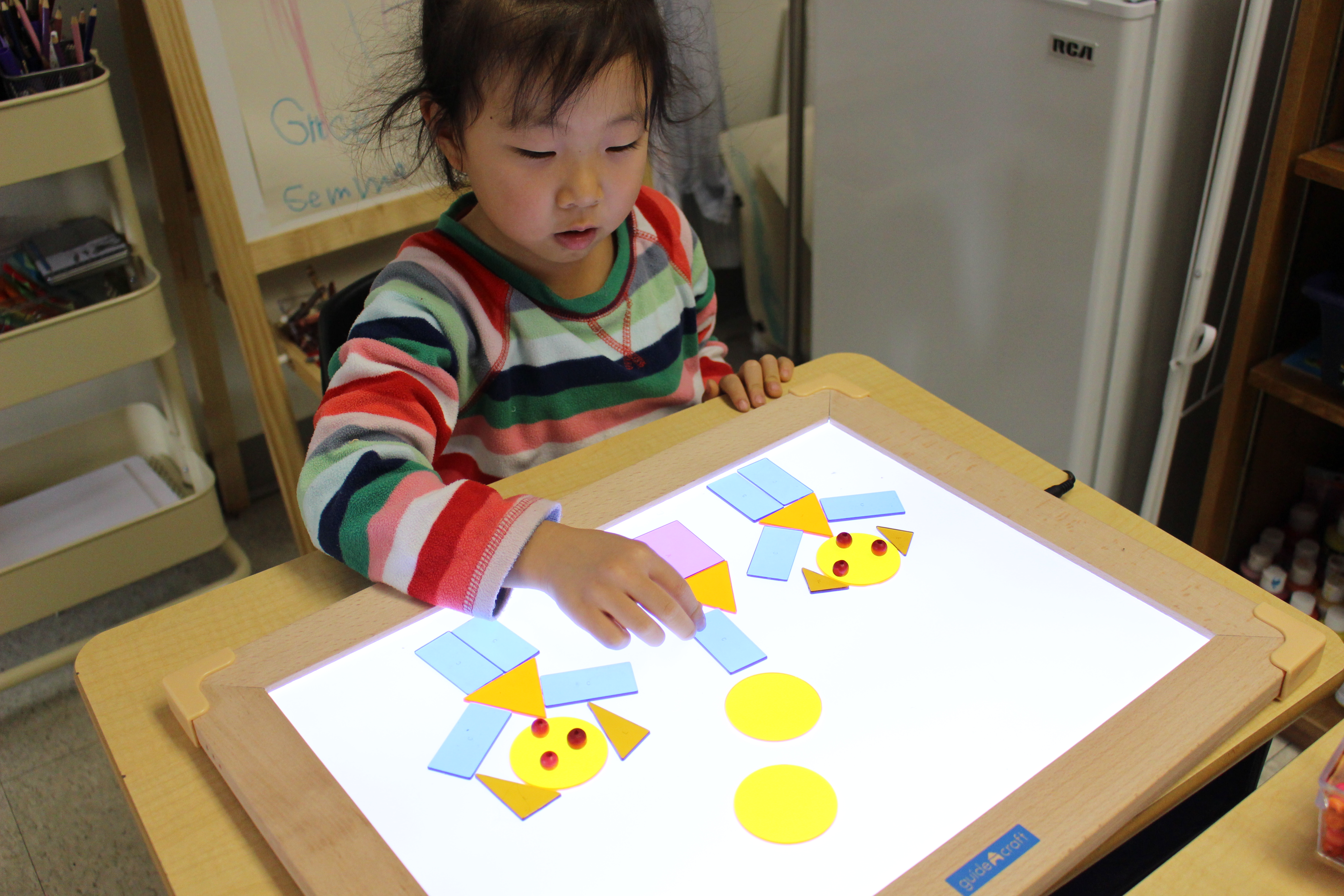 This week was quite exciting, as we had a few new materials and provocations enter the classroom. It's amazing how motivation for learning increases when novel experiences are involved. The girls were excited to explore how objects glowed on the light table,  how they could use watercolours to represent flowers, and how they could create symmetrical designs. We were also able to support different communities this week by volunteering our time - raking leaves at the YWCA Women's Shelter and selling warm drinks in support of Planned Parenthood in the United States. Here are some pictures from our week: 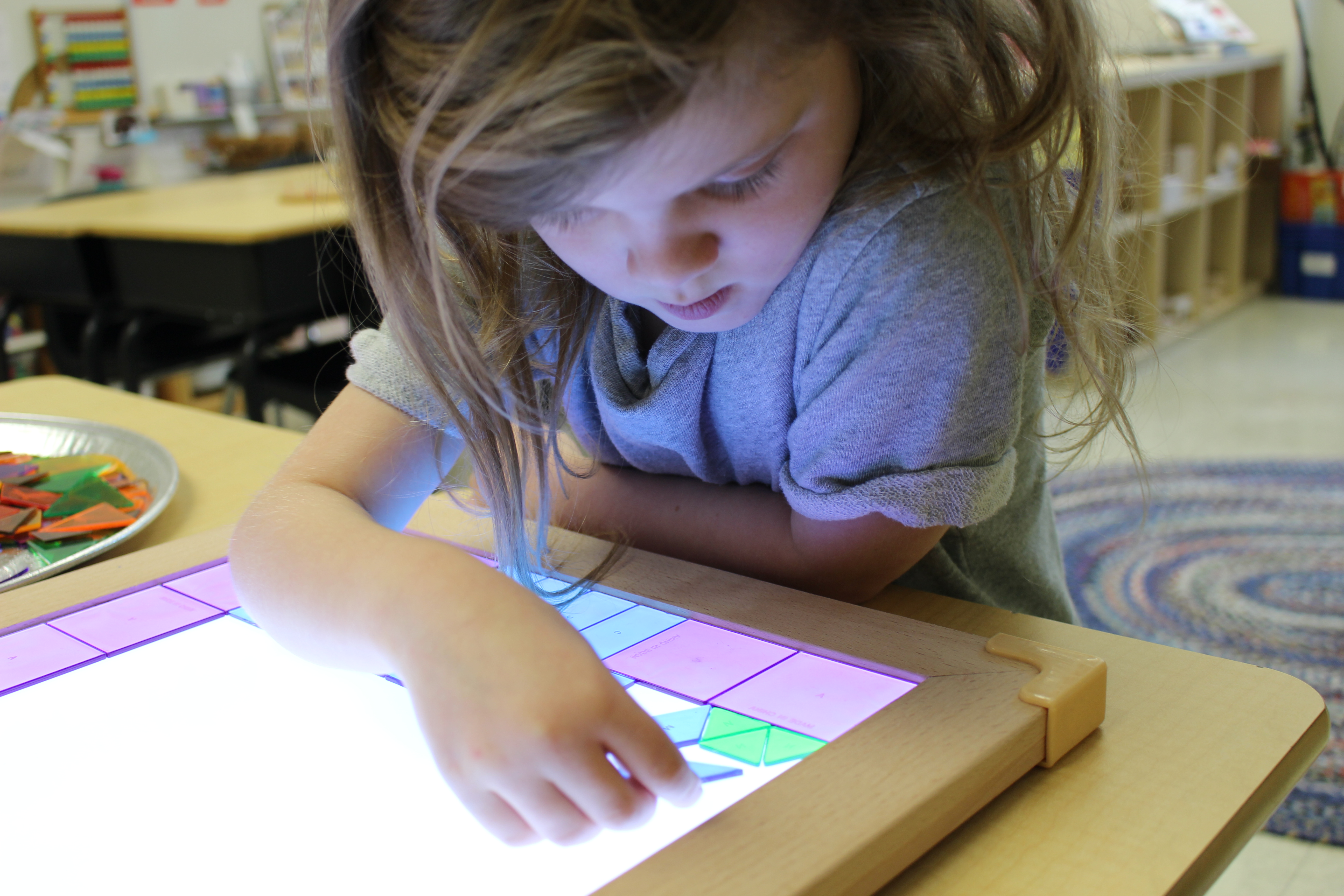 G uses the new light table for the first time. She takes time to create a design using our transparent shapes, also uncovering how larger shapes can be composed of smaller shapes. 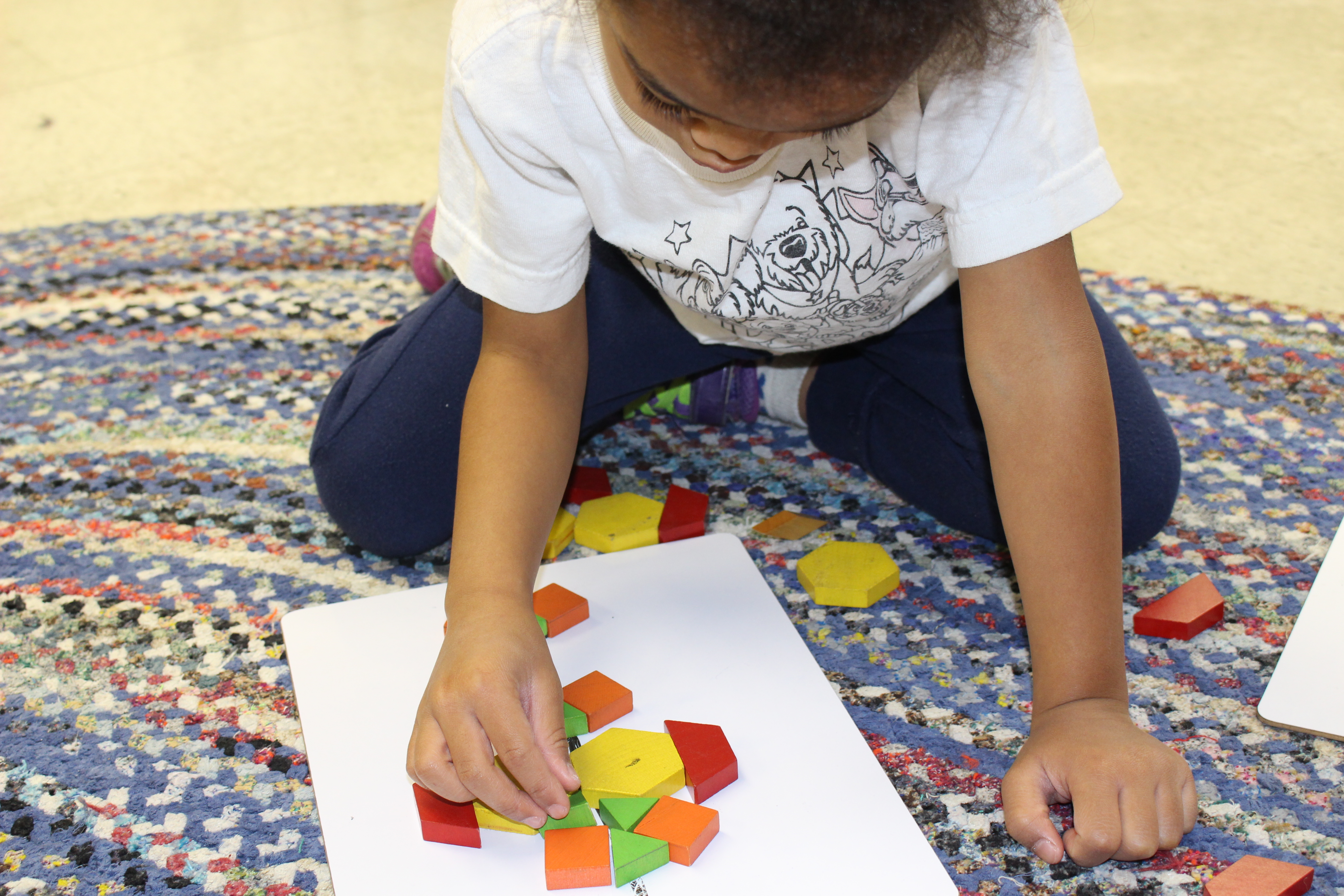 Z works hard creating a symmetrical design. We are learning that symmetry means when something is the same, but flipped, on both sides. We noticed that our faces and bodies both have symmetry, as well as a number of things around the classroom. 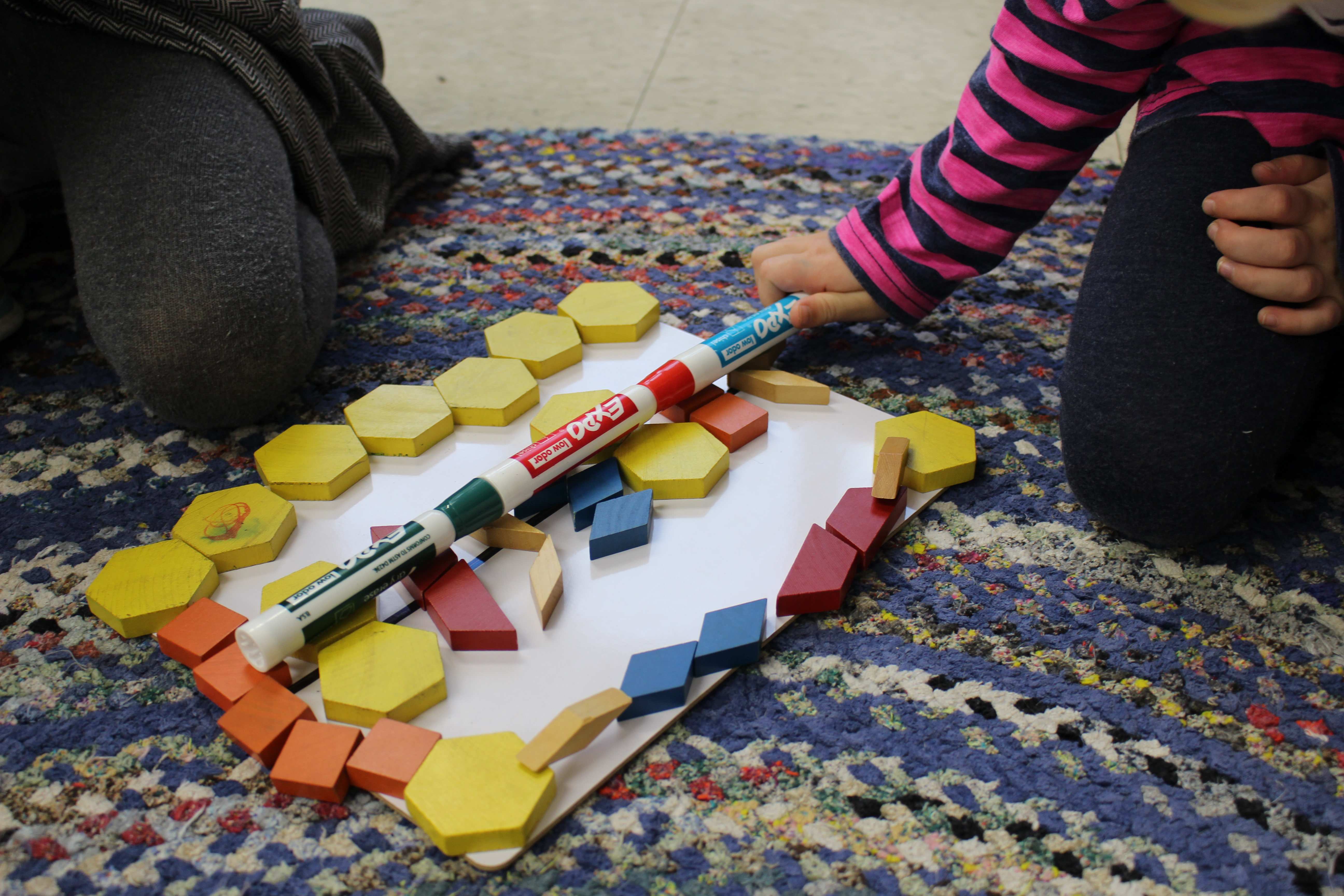 G tests out her design to see if it has a line of symmetry. She notices that the middle portion does, but the edges look a bit different from each other, and probably are not symmetrical. 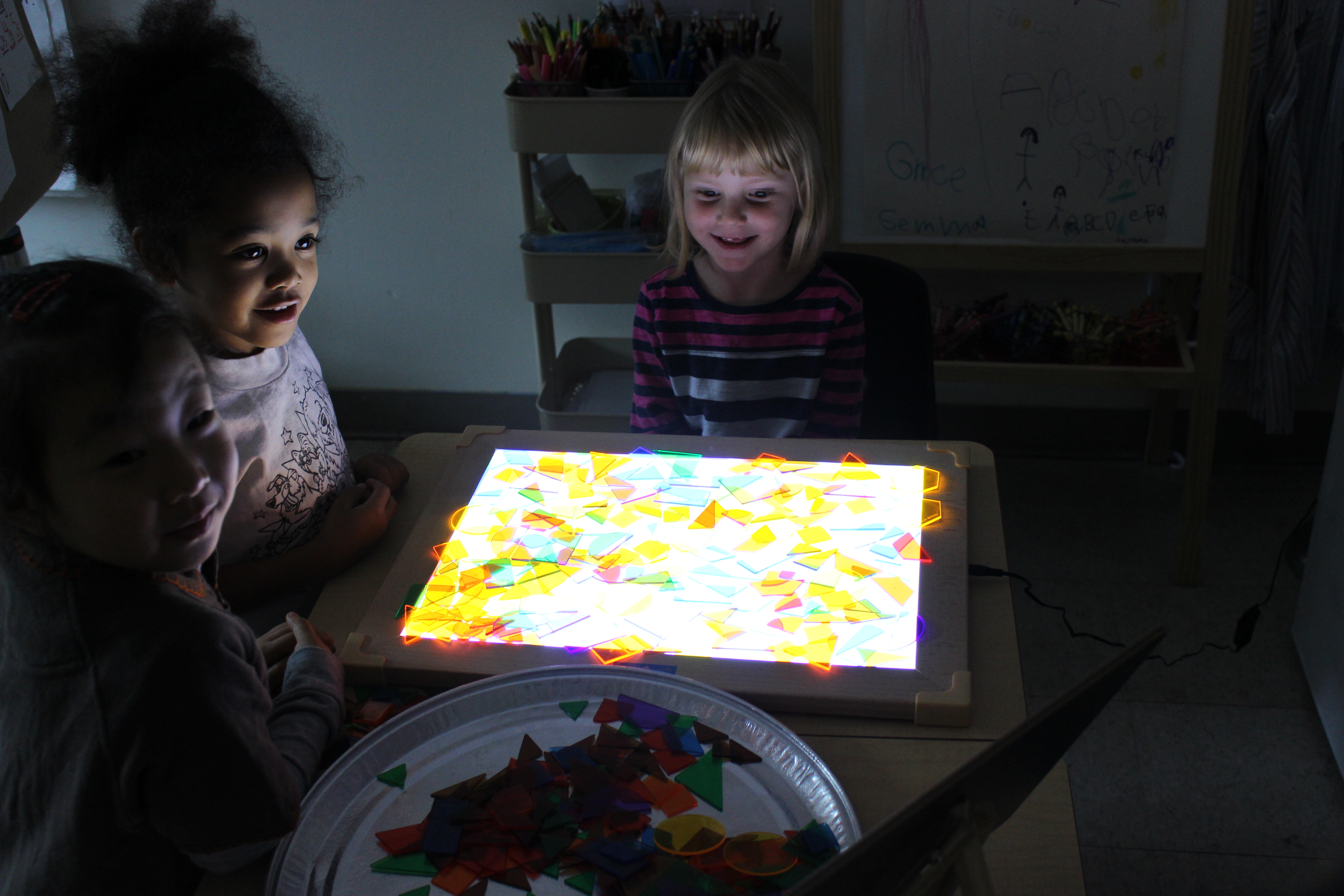 G predicts that if we turn off the lights, the light table, and shapes on top of it, will glow. We test out her theory and it works - you can see the smile on her face! 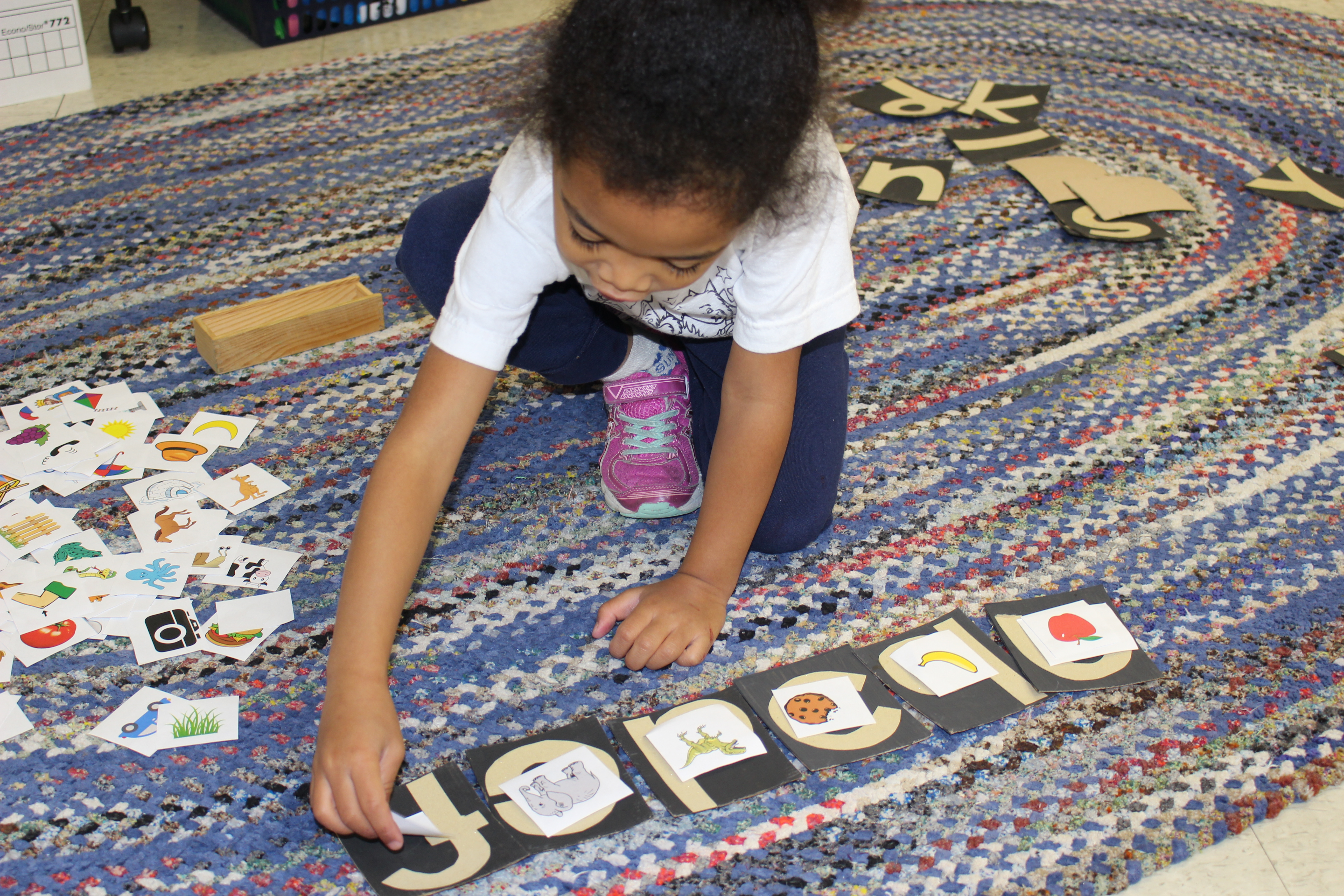 Z spends time matching pictures to their initial sounds while she is working at the Communication Centre. She chooses to move through alphabetically, and search through the pile of pictures to find a word that matches the sound before going to the next letter. 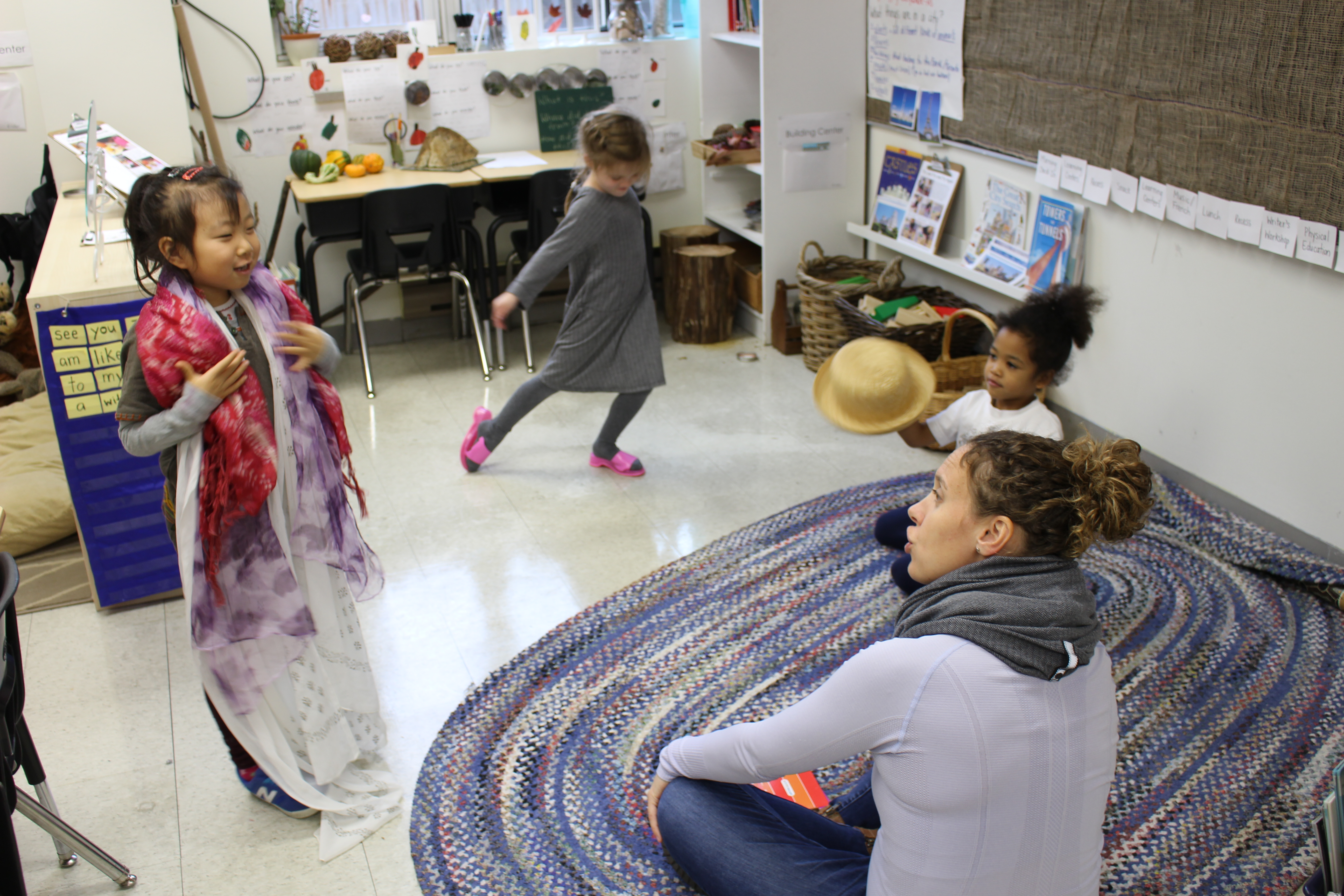 In French the girls are learning the words for different pieces of clothing. Elizabeth sends them on a hunt to the Drama Centre to find souliers (shoes), un chapeau (hat), and les écharpes (scarves). What is more fun than learning through dress up? 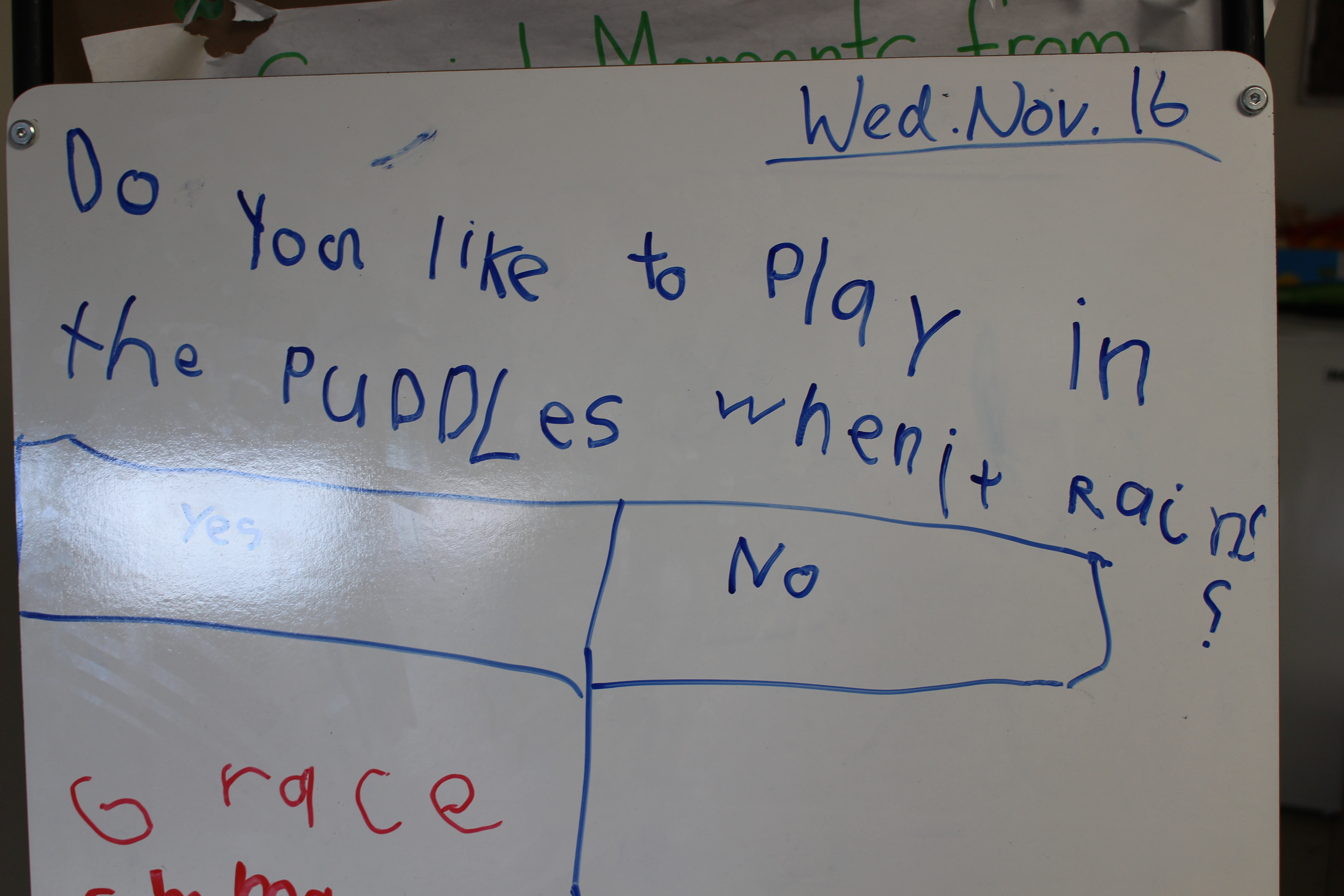 G asks if she can write our morning question today. She uses the word wall to accurately spell sight words, and then asks how to spell the longer words that she doesn't know. What a great motivation to write in the morning! 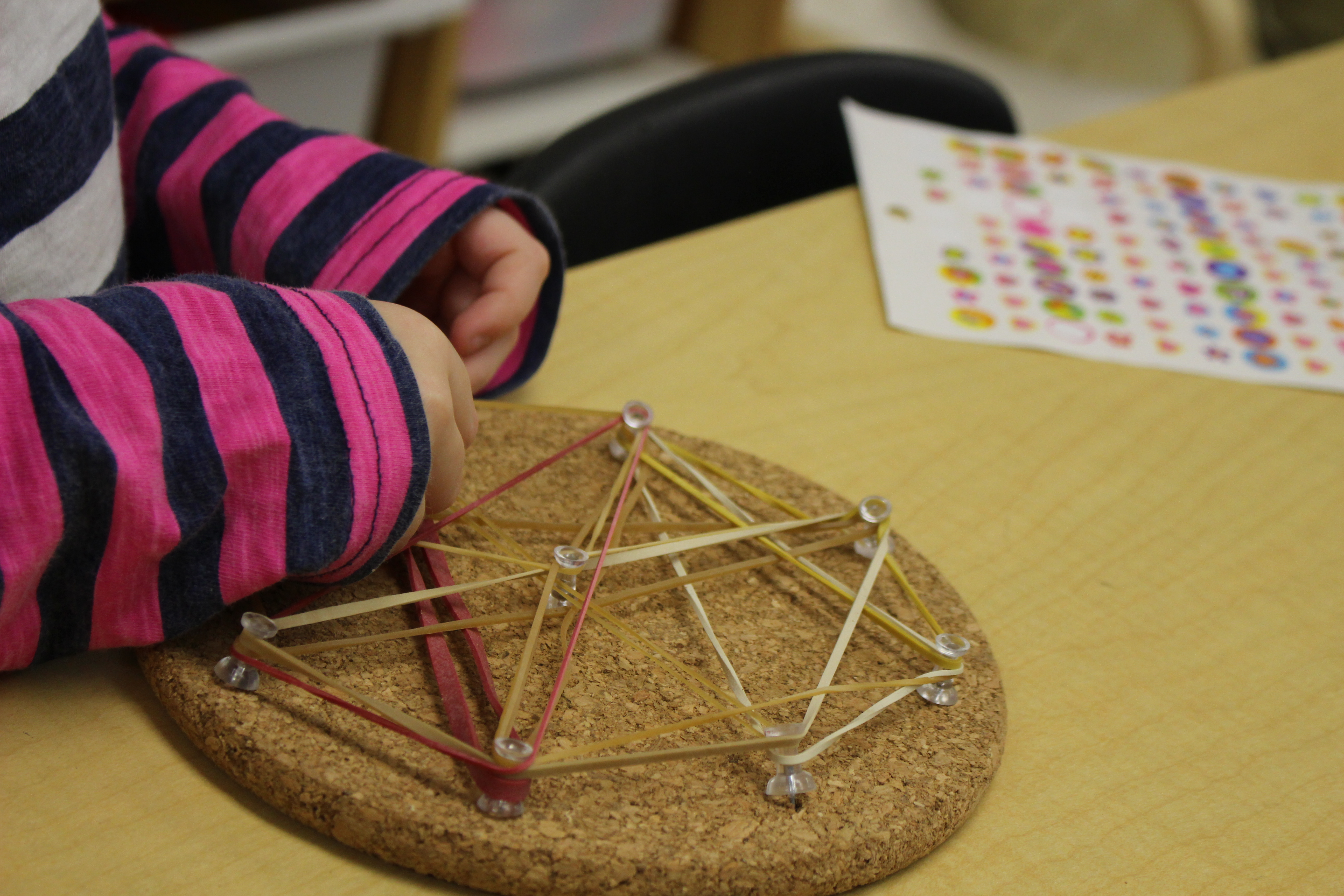 G uses the peg boards to explore line and shape. Putting on the elastics is fun, but the challenge starts when she wants to take them off. 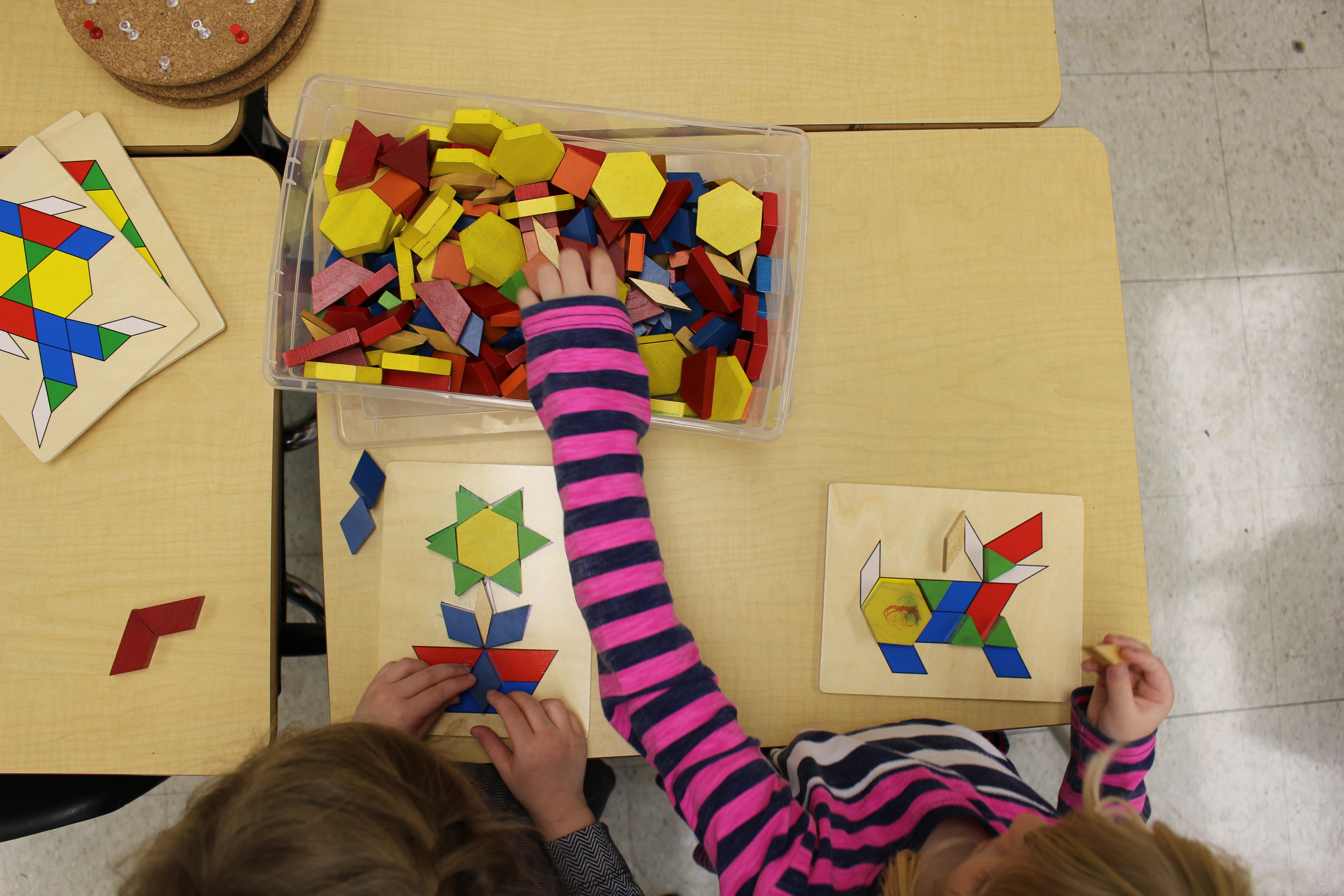 G and G spend time at the Math Centre filling in pattern blocks on the templates. We know from research that engaging in activities that develop spatial awareness improve later success in math, problem solving, and literacy. Bring on the hands-on learning with shapes and manipulations. 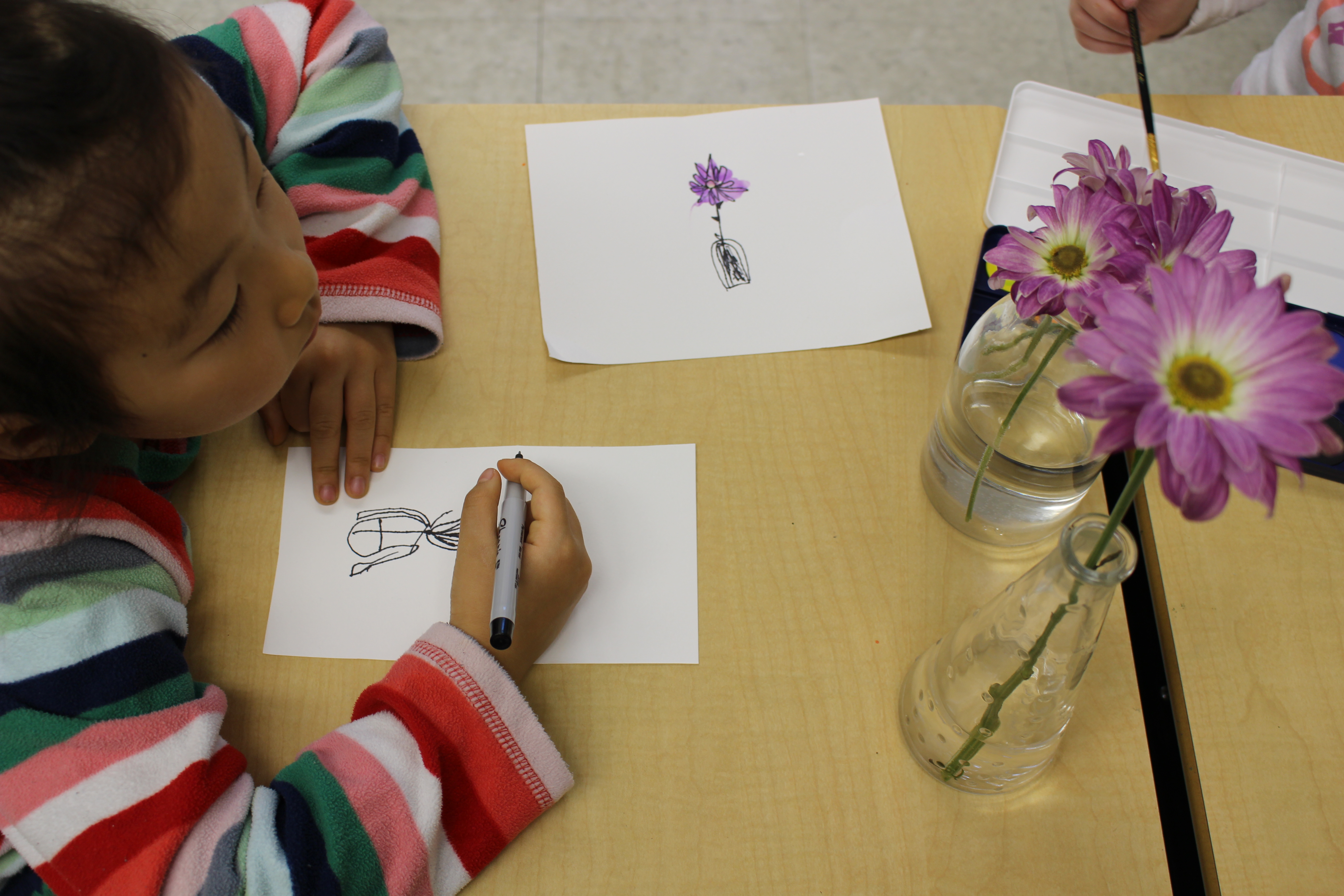 M and Z are playing "school" in the Drama Centre, and the girls are role playing teacher and student in their play. M listens as Z reads her the schedule for the day.

M looks intently at the flowers as she creates an observational drawing of them. We are looking for shape and details, and documenting these using our special pens. Then, we add watercolour paint to show the colours that we see on the flowers in front of us. 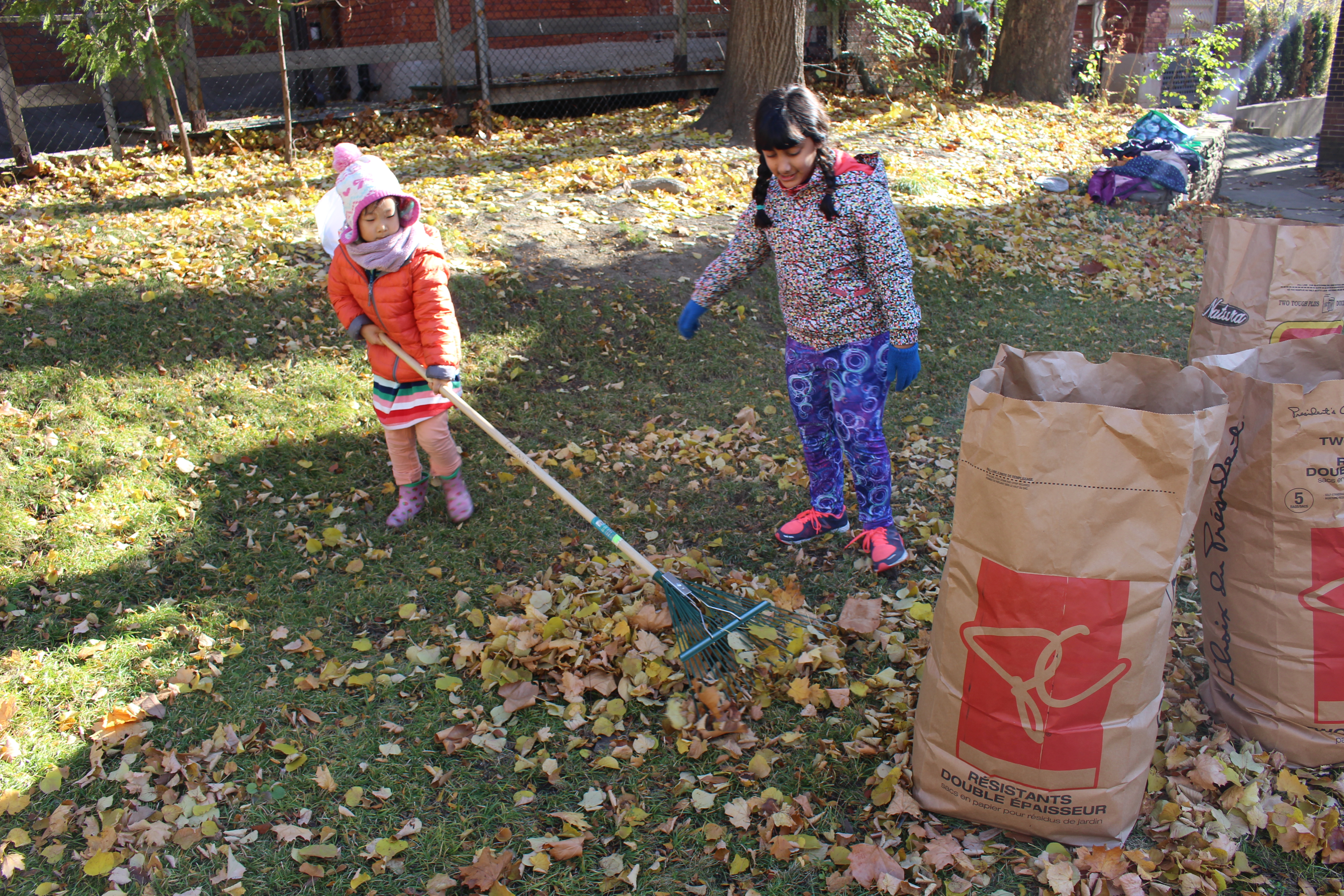 M helps rake leaves using a friend's rake at the YWCA Shelter. As a school we managed to clean up their front, side and back yards, and fill close to 25 bags of leaves. What's more incredible is that this is the work we did in 40 minutes - imagine what could be done with a little bit more time. The girls loved grabbing large handfuls and helping to rake. 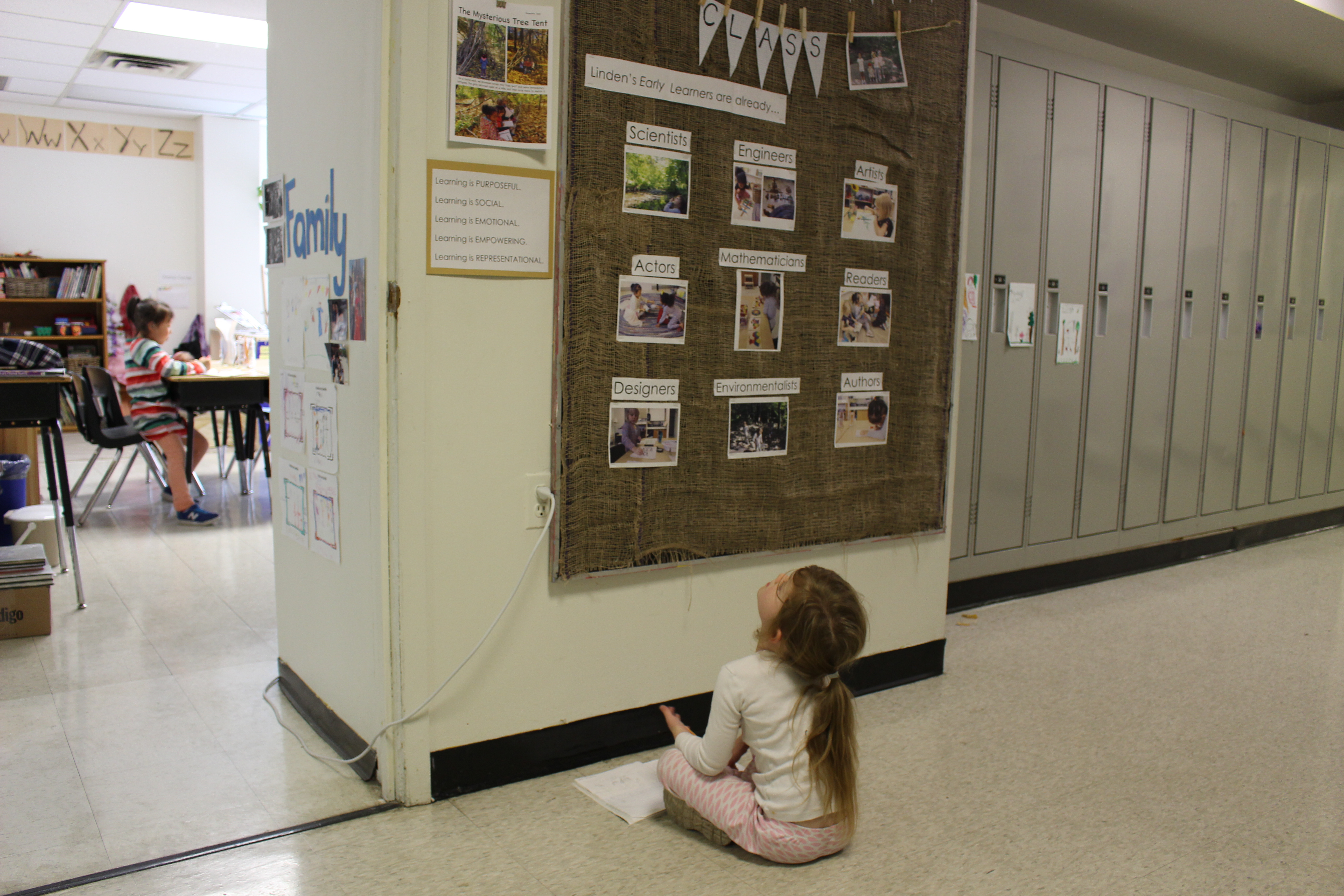 G uses print that she sees on our board outside of the classroom to help her spell some words during Writer's Workshop. She independently tracks the letters she sees and writes them down to accomplish this goal. G is writing "early learners" on the page. 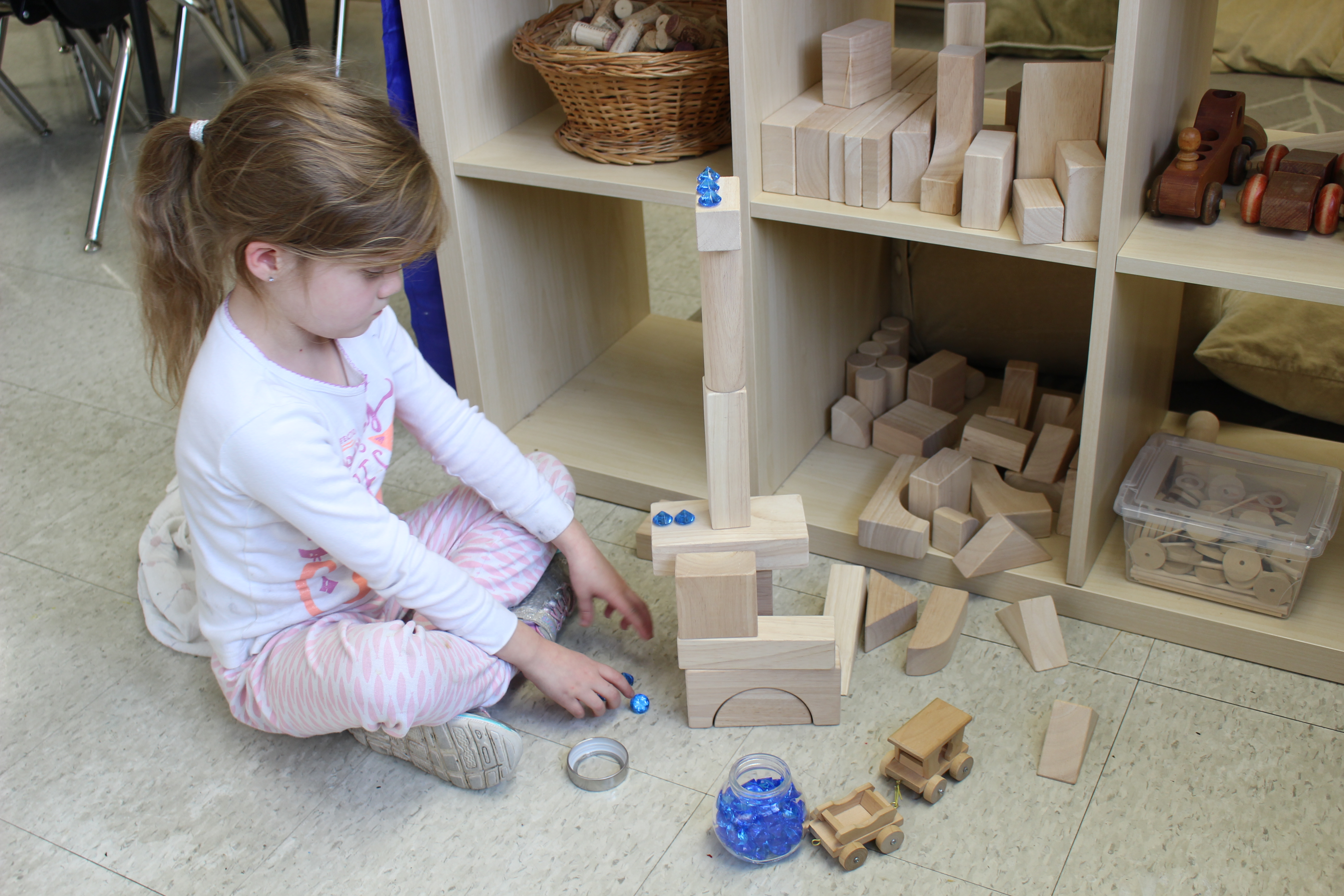 G tells me that she is building the CN tower, and the the gems are the lights on the building. She makes a number of changes to her tower throughout her building process, adjusting it to be similar to the vision she has in her head. 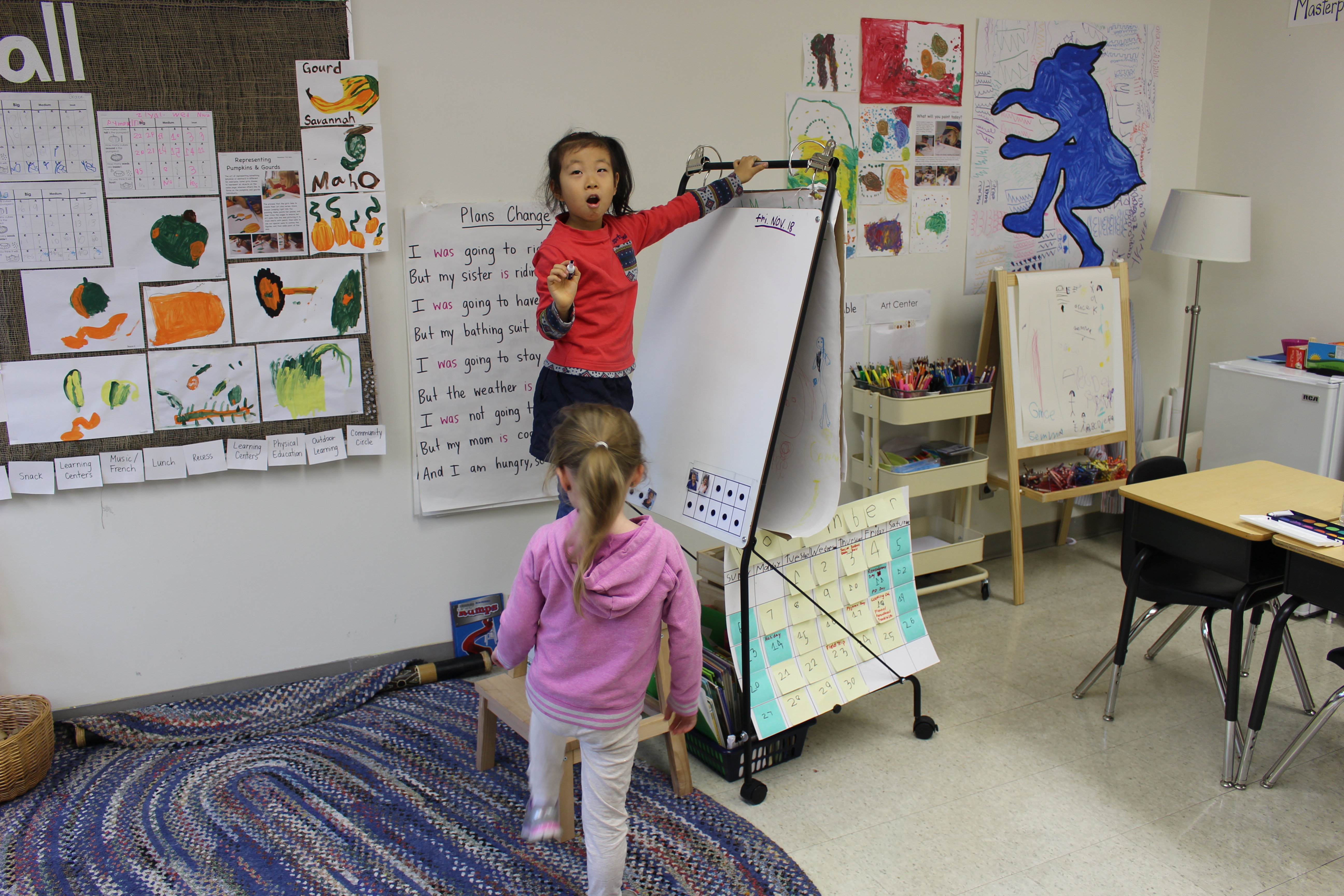 After she saw G write the morning question, M also wanted to have a turn creating one. G helped collect the sight words M needed to check her word spelling, and was happy to observe a friend do some writing. 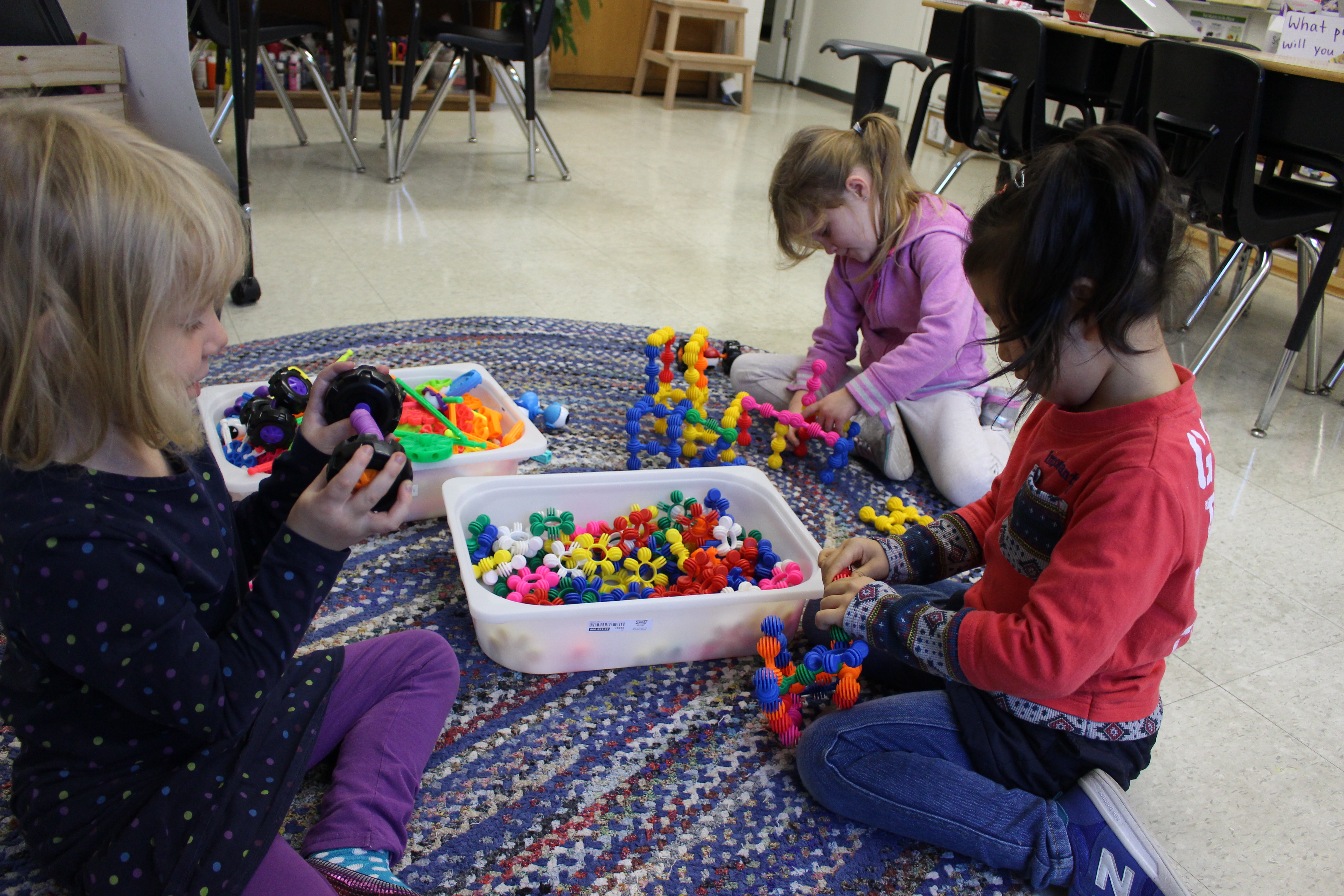 As a change to our morning learning time, the girls were given the choice to explore two materials that we don't have much exposure to. M built a stroller, G was building a playground, and G was exploring the wheels that connected with an expandable middle. 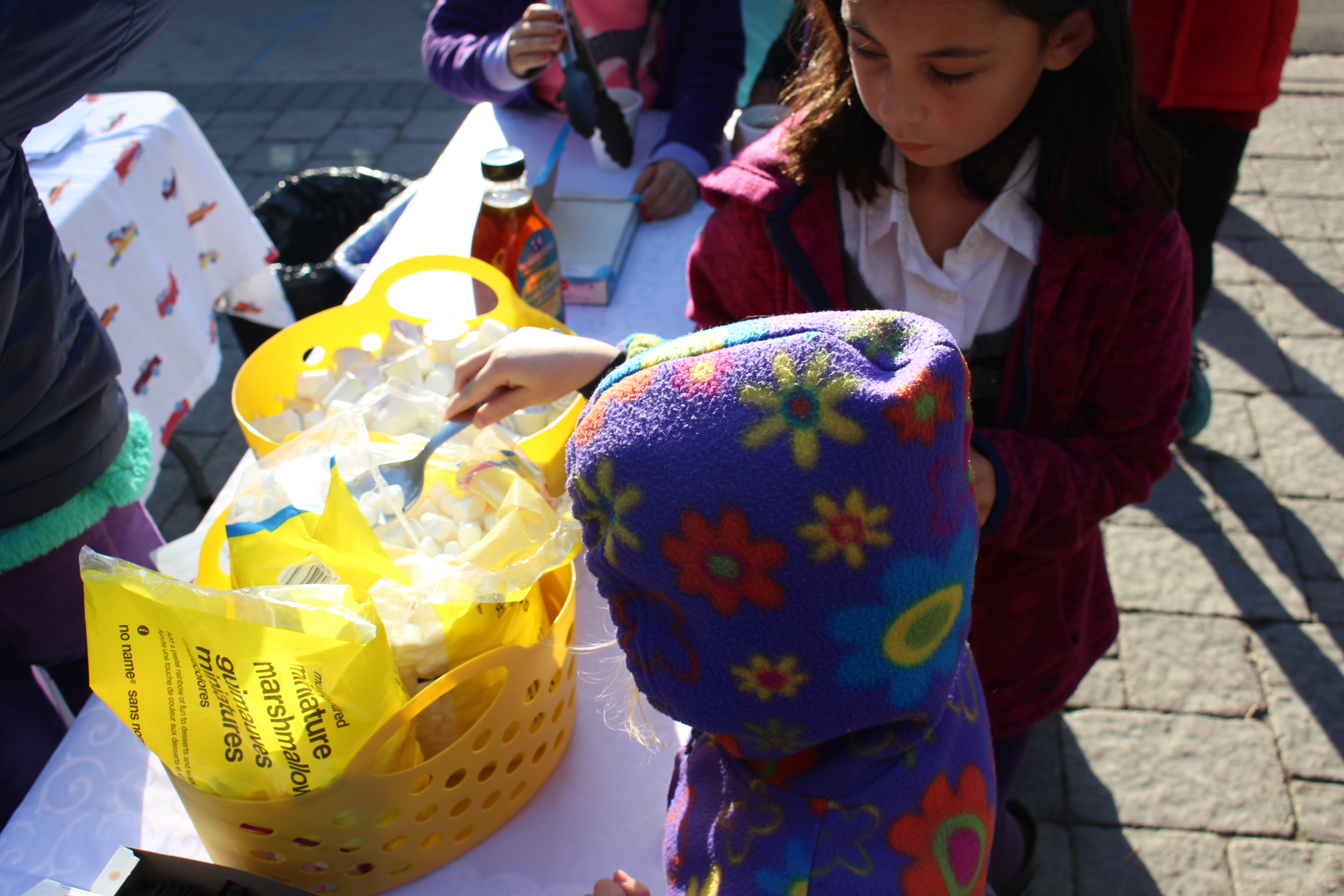 G scoops out marshmallows to put in S's hot chocolate at our fundraiser for Planned Parenthood. The early learners were known as the "marshmallow managers", and enjoyed their role in the fundraiser. As a school we raised close to $750 to donate - wow! 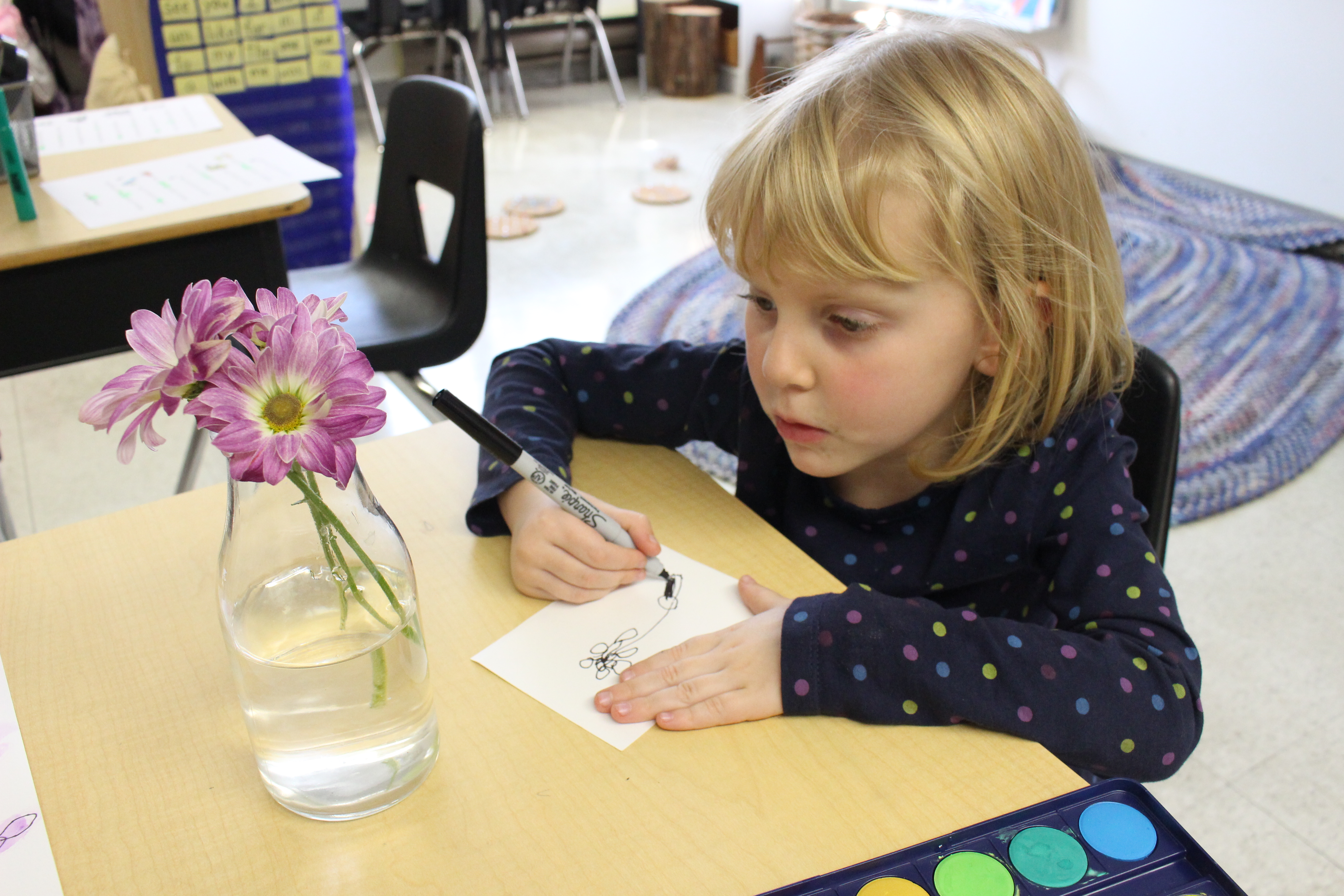 G closely observe the flowers for her observational drawing. She looks carefully at the water level in the vase to represent in her picture. 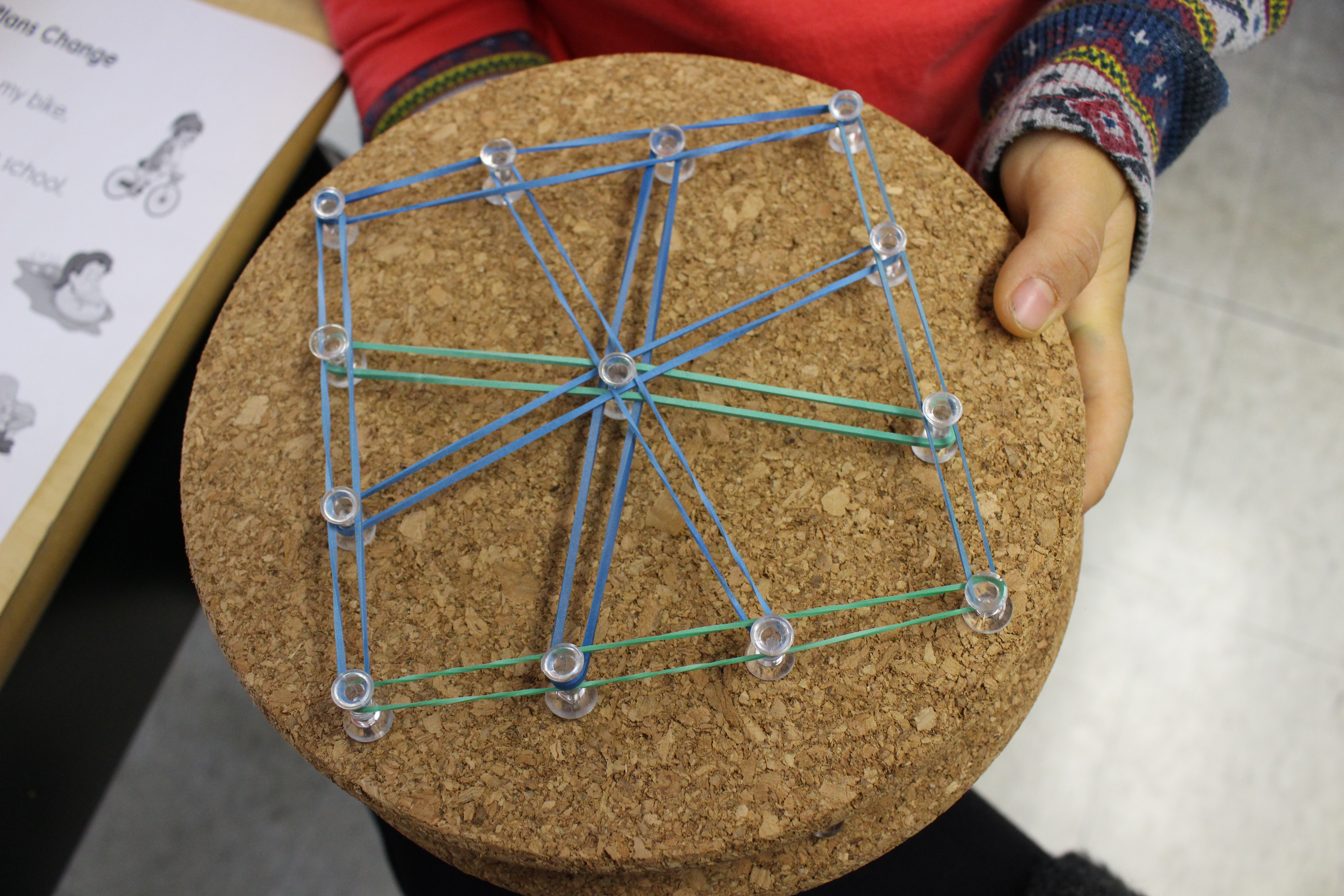 M is proud to share the design she created using the peg boards and elastics while at Math. She comments that it is a square on the outside, but a start on the inside. 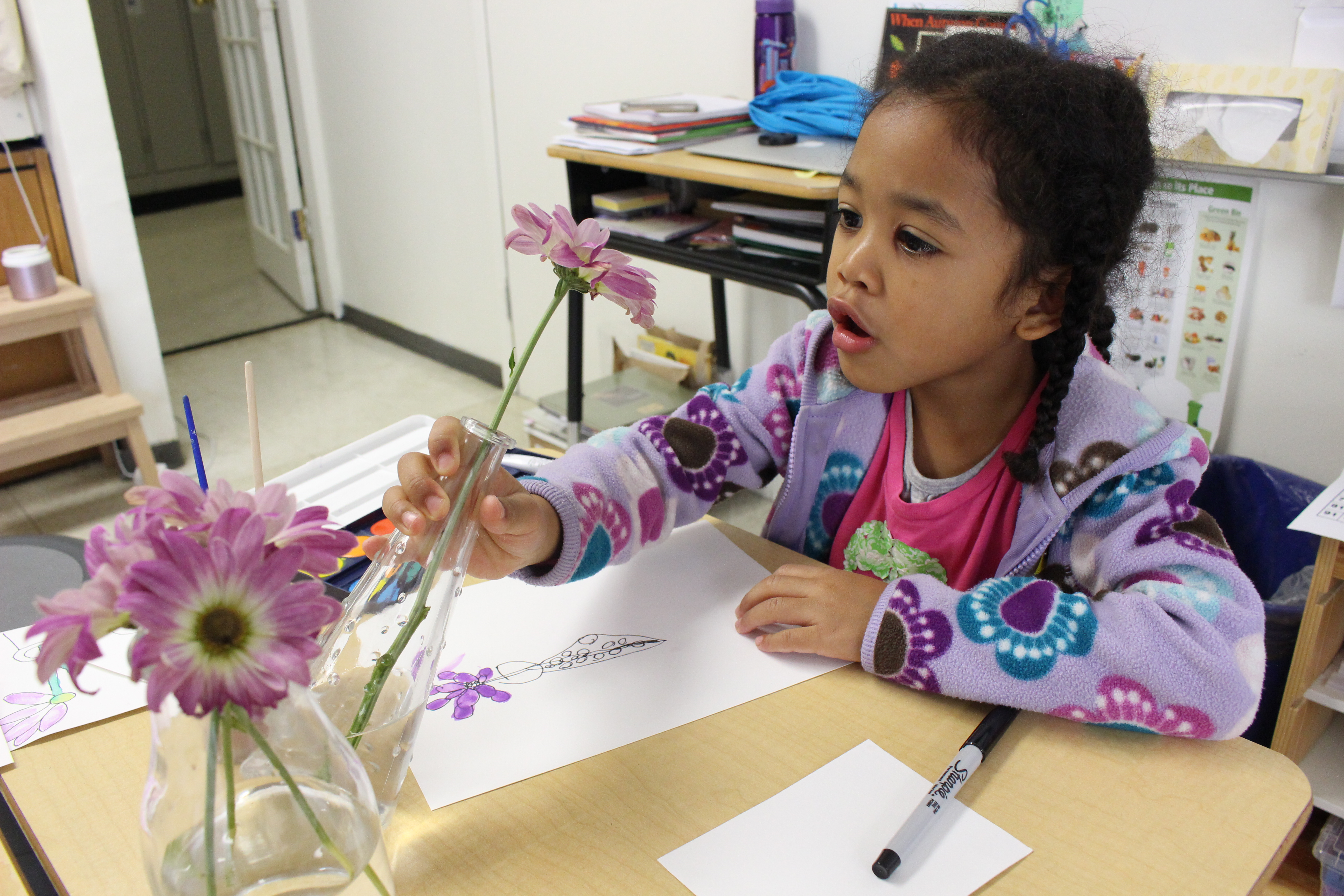 Z is a bit awestruck as she notices the colours in the middle of the flower. All it takes is a tilt to notice the small details, and understand the colours that are there. 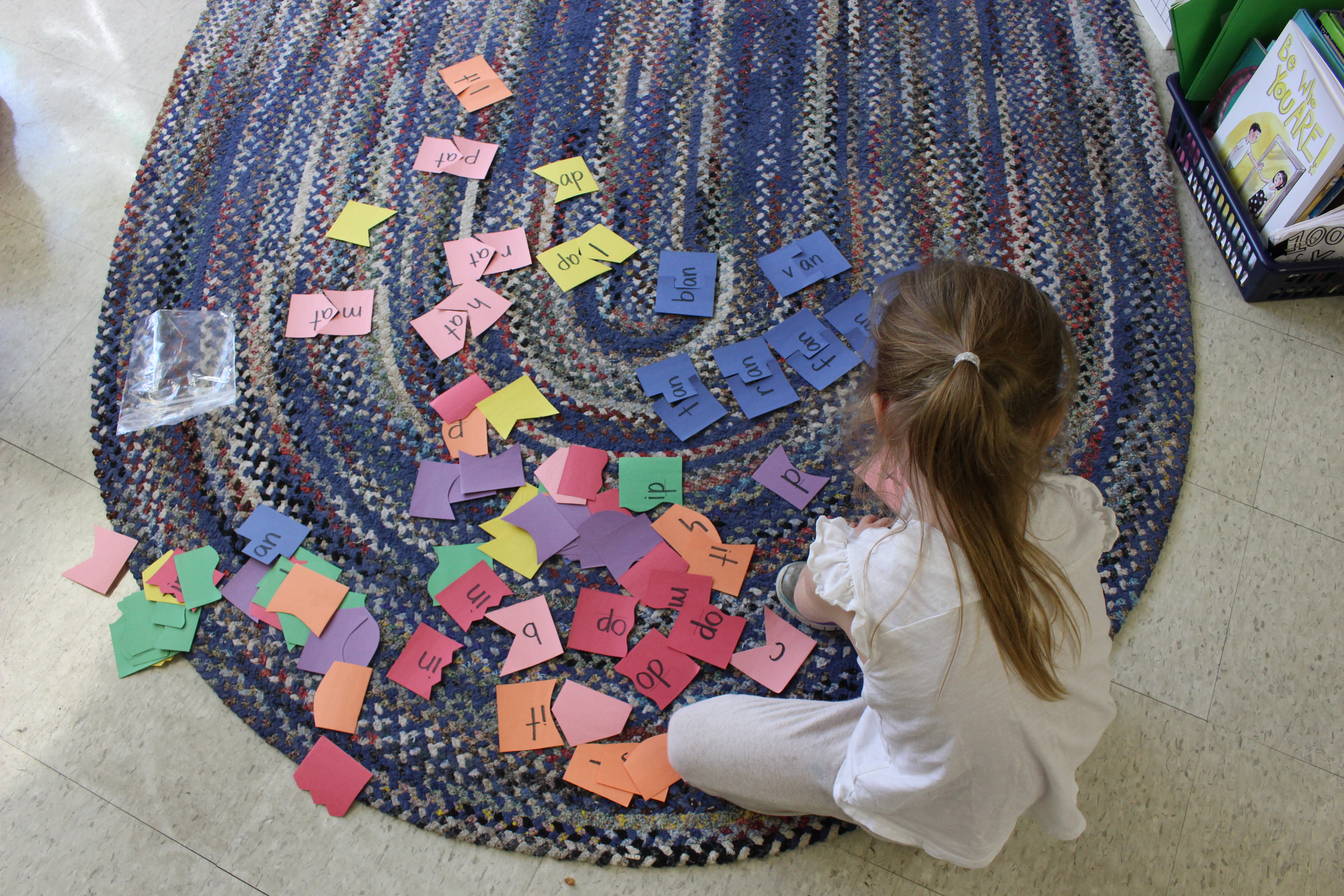 G works through matching up the broken words, and then figures out that she can organize them by their letter patterns. She later chooses to use a practice board to write out some of the words that she has put together. 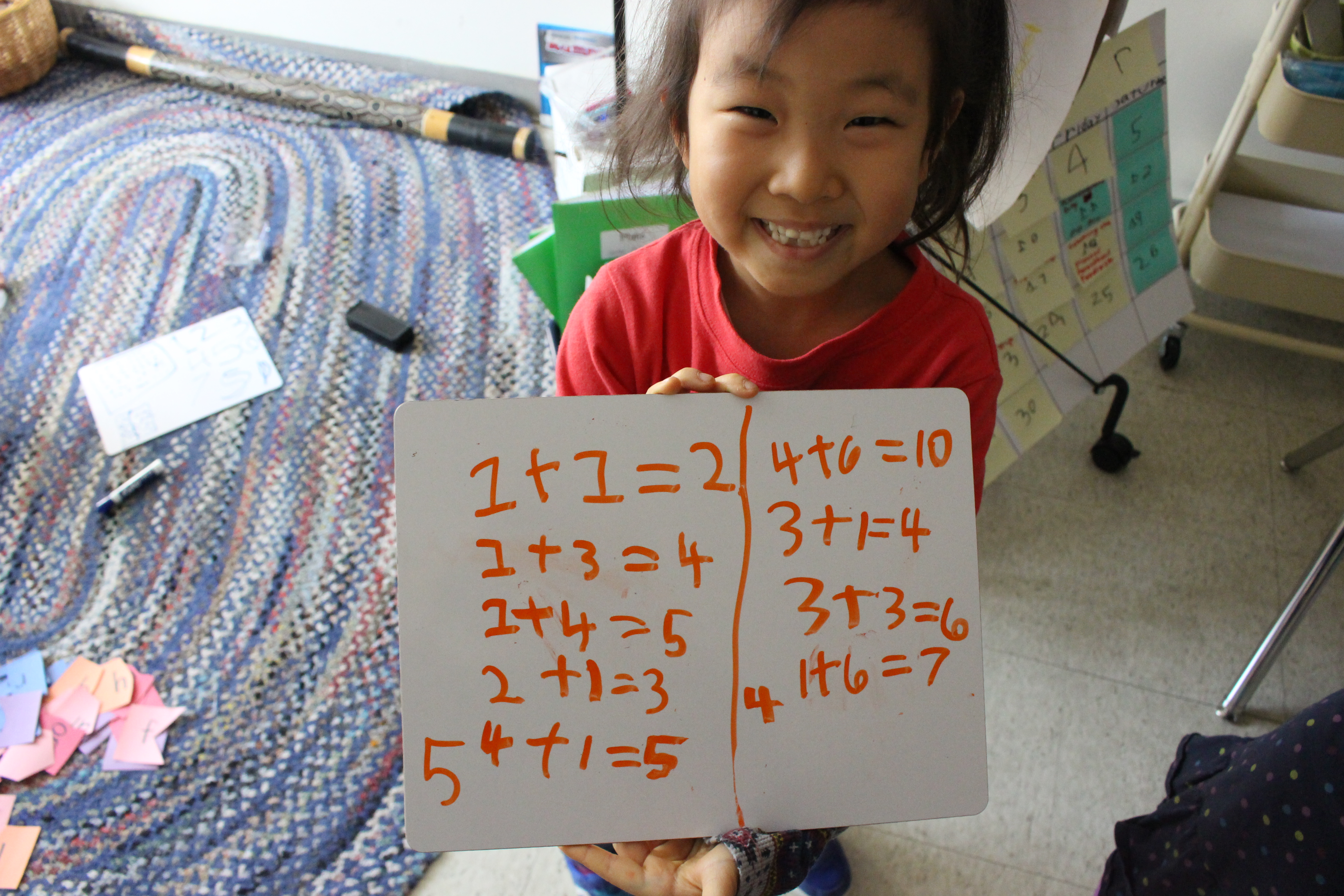 M shares the addition that she was doing during Math Centre time. She rolled two dice to get her addends, and then added them together to get her sum. She also counted how many equations she did on each side of the board.