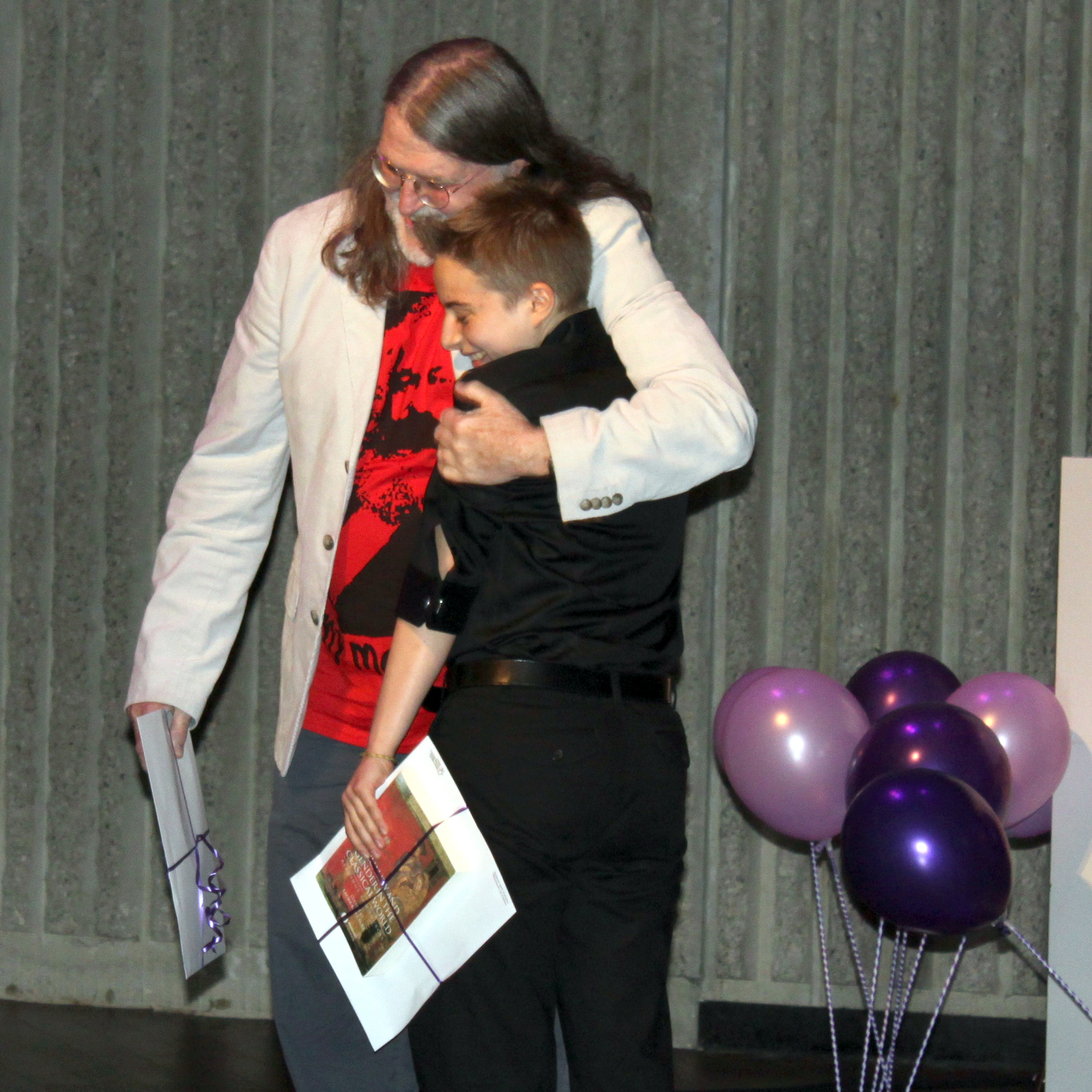 Andy Ranachan presenting an award to Noa Katz at Celebration to Greet the Summer.

It is with deep sadness that we inform the Linden community of the death of much-loved teacher Andy Ranachan, who passed away last week at the age of 74.

Andy joined us in 2003 and taught history, literary theory, civics, anthropology, and psychology and sociology to our high school students for over a decade. He came to be known for his brilliant wit, sense of humour, kindness, and incredible passion for social justice and equity, inspiring students with the depth and breadth of his insights into our political economy, social policy, and history. He also coached our soccer teams, and served as faculty adviser to our Social Justice Club and the Model UN.

We honour his memory and are deeply indebted to him for his contributions to our community and our students.

In remembering Andy, we recall his wonderful interview with us in 2006, where he talked about his interests and approach to teaching: 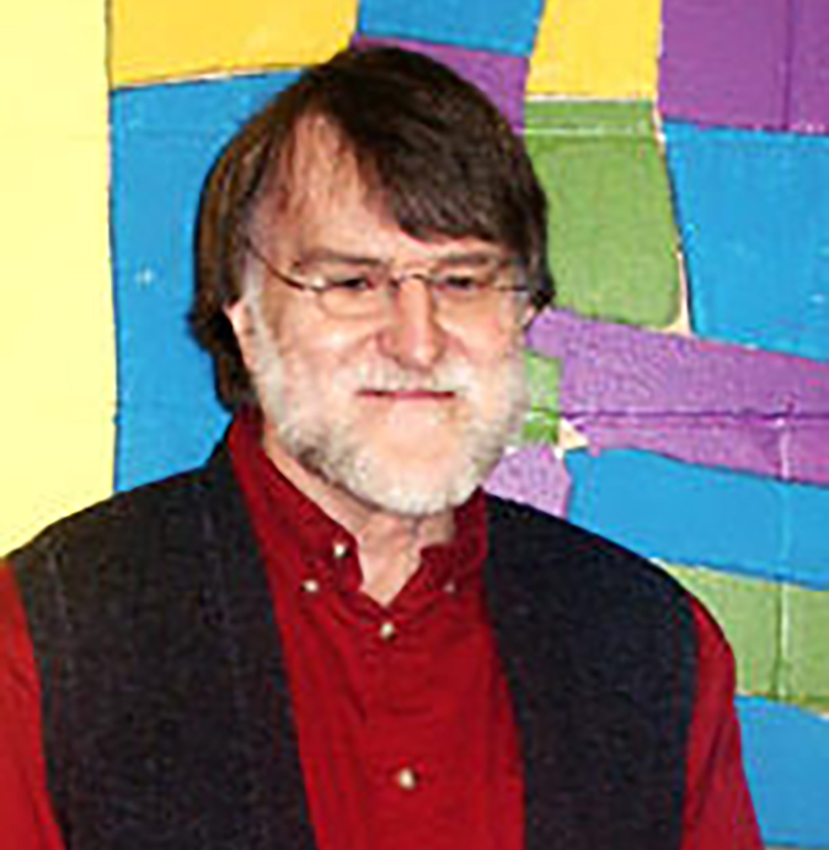 An educator and labour union activist, Andy Ranachan says he hated high school except for the subject of history. He funded his university education by working in a factory as a millwright -- an experience which inspired him to organize labour, union and bargaining units at York University. Since 1974, Andy’s keen interest in politics and social policy have led him to part-time teaching of humanities, social science, political economy, political science and history at York University, Ryerson University and the University of Toronto. He has served on numerous community boards, worked as a social policy consultant, and recently spearheaded the Regent Park/ University of Toronto Learning Exchange programme for local residents.

What follows below is an introduction to Andy Ranachan and our recent conversation with him about his teaching experience at Linden:

Linden: People say The Linden School is one of Toronto’s best-kept secrets. How did you discover us?

Andy: I stumbled upon the job opening at Linden by chance. However, I had heard about Linden through a Linden family. I found the job advertisement intriguing, and despite the fact that the requirement of women’s studies could not be met, I knew I would be the right fit as I shared the same philosophy that informs women’s studies. I teach history from the bottom up, utilizing the trinity of race, gender and class. I had the option of further university teaching but chose Linden instead. One of the main reasons for this decision was that at university I would be teaching more of the same things. I knew that at Linden I would be required to re-think and re-tool the subject matter.

Linden: How has your vast background in education informed your pedagogy at Linden?

Andy: I have always believed in the capacity of education to really improve and empower people in terms of their understanding of and relationship with the outside world. I think education is critical to turning out good citizens. My own interrupted educational background and my subsequent teaching at university and involvement in community education have confirmed this. At Linden, you actually get to engage with students and transmit the value of education on the first floor before they leave for university, and before they become too jaded and too cynical.

Linden: Does Linden’s girl-centred education make a difference in how you teach?

Andy: I have always taught history from the bottom up. Coming to Linden meant that I was able to be consistent with my values and teaching style. In my classes, we don’t just look at history from the top, but we also look at how history impacted those who were excluded from decision-making and participation. It’s somewhat ironic that Linden students expect you to show how events have impacted women and the underprivileged, but, at university, students aren’t interested in social and cultural history. They just want a straightforward delivery of political and economic history with a minimum amount of critical thinking and analysis. Linden allows me to teach the way I want to and to go beyond.

Linden: How are Linden students different from other students at York, Ryerson and U of T?

Andy: They are much more open and flexible. They don’t come with as many pre-conceptions about a topic. They don’t come with a view of how and why things happened. They are not looking for the same kind of certainty and surety I’ve seen in many students. There is a greater sense of wonderment amongst Linden girls, and they are much more open to new hypotheses and new ways of analyzing things. My first-year university students were less willing to push themselves further, and here it’s the opposite.

Linden: What is the most challenging aspect of teaching girls at Linden?

Andy: The challenge in teaching in Linden’s high school is that you really have to consciously plan to engage students on a class-by-class basis. You have to allow for participation and build this into your lesson plan. Students expect you to do this. Our students have high standards of us, and as a result, we have high standards for them. Linden students don’t want a talking head at the front of the classroom. They don’t want a teacher who just sees them as a vessel that can be filled up. They expect a two-way interaction.

The great thing about being at The Linden School is that you also get to meet your students’ parents. It’s very interesting and useful, and you get great feedback from parents. You don’t get this opportunity at the university level.

Linden: What is your perspective on single-sex education?

Andy: I experienced co-ed education growing up, yet I have intuitively always known about the benefits of single-sex education. I have coached girls in the North Toronto soccer league and at Jarvis Collegiate for the last 20 years. I learned that one has to coach girls differently from boys in terms of tactics, in terms of performance and in terms of competitiveness. A good soccer team is only as good as its weakest player. Therefore, the focus is on teamwork. Girls grasp this concept much better than boys, who are more concerned with individual performance as opposed to team performance. Girls apologize when they foul the other player, and boys don’t.

From a pure soccer point of view, I prefer coaching girls, as they understand teamwork. Girls also respond much better to group work in class than boys. They relish it, in fact. When I worked with trade unions, men would try their best to avoid group discussions as they don’t like to express themselves. I had to ensure that I invited women to these groups or there would be no conversation and no end product. Girls understand that everyone has to be heard, and they have less desire to be the top gun. However, I don’t think the two are necessarily mutually exclusive. Anyone who is a leader in business and education has to be able to work with groups. Therefore, being a good team player is an indispensable leadership skill. The vision of a lone male wolf running a corporation all by himself is a myth!

Linden: What is it like to work with Linden’s faculty?

Andy: The scale of Linden means that we share a small space and the same students. This means that you are able to get more feedback about your own teaching and you also learn about how your students are doing in other classes. This helps you in your own teaching. In terms of collegiality, this place is quite remarkable. Students come first, and faculty share information and resources without any hesitation.

Linden: What is keeping your students busy these days?

Andy: We are studying the Declaration of Independence and the American Constitution while the U.S. elections are in progress. Students are involved in a project which monitors Canadian coverage of the election and looks at what key constants in American history keep recurring. For example, we see a recurring theme of pride in democracy, individualism, freedom and equality. Students observing the election coverage can study how these concepts impact voting and why U.S. presidents have to be aware of these key core historical values.

Linden: What about the Canadian home front?

Andy: We are excited about The Greatest Canadian show on CBC. Students have received kits from CBC, and we are compiling two lists: who students think should be amongst the top ten Canadians, and who they think the rest of Canada will choose as the top ten Canadians. We will be assessing this process as we go along.

Apart from academics, I also oversee the social justice club and coach soccer. I not only coach students that take my classes but also other grades. Academics and co-curricular activities at Linden are a seamless web which allows me to contribute to the idea of Linden being a livable, active community. I also find that one of the great benefits of teaching at Linden is the Grade one, twos and threes. During my first two weeks at Linden, I dreaded knocking them over. Soon, I was touched by how many knew my name and enthusiastically greeted me each morning. You are an integral part of the school no matter what level you teach.