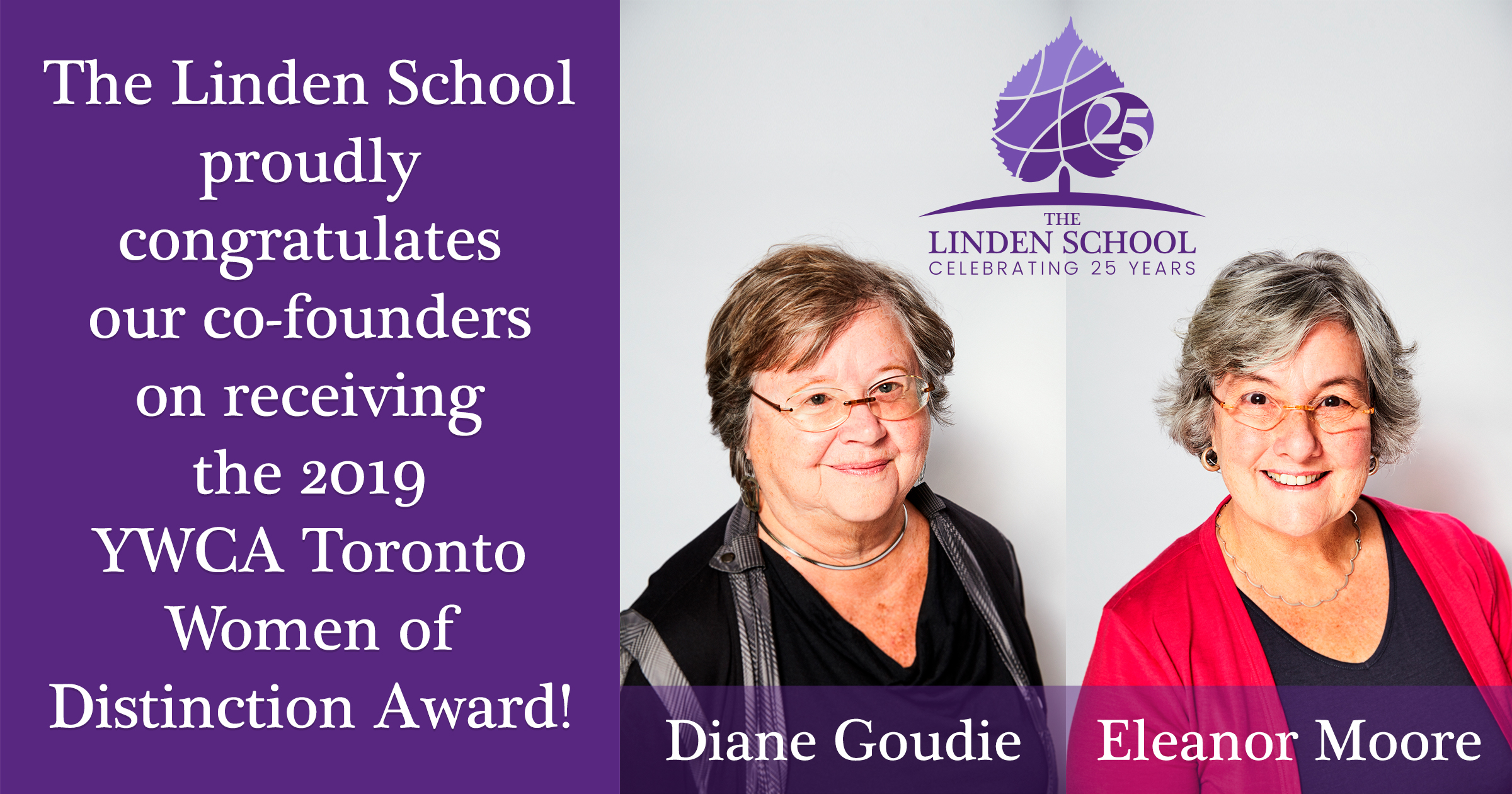 March 8, 2019: The Linden School is proud to congratulate our founders Diane Goudie and Eleanor Moore on being named recipients of the 2019 Women of Distinction Award by YWCA Toronto. This year’s awards will be presented at a special ceremony at the Fairmont Royal York on May 23, 2019.

Founded in the early 90s as the only feminist school in Canada, Linden has been intentionally shaped and powered by research and the co-founders’ experiences. Long before feminism and “Femvertising” were popularized through the media, Diane and Eleanor introduced feminist pedagogy to Toronto by founding a dynamic new school that created tangible, structural change in how girls socialized, learned, and engaged with their studies to overcome gender-based bias. For the past 25 years, the founders have continued to work tirelessly to create a transformational educational experience that provides Linden students with an unshakable confidence in their voice, intellectual abilities, and the power to become changemakers.

“Teaching young women to think critically about the world around them — and then go out and improve the world for other women and girls — has never been more important. It was Diane and Eleanor's fierce determination that created a community in Toronto where girls learn to do just that,” says Linden Alumna Emma Warnken Johnson, Class of 2004, and member of the school’s Board of Trustees.

“In the recent new and unabridged translation of The Second Sex, author Simone de Beauvoir declares ‘One is not born, but rather becomes, woman,’” says Rusty Shteir, Linden founding parent and Professor Emerita, School of Gender, Sexuality, and Women’s Studies, York University. “Beauvoir’s feminist analysis takes a long historical view over ideas about women and the social, cultural, and religious factors that shape beliefs and practices. The education of women is a theme throughout. The work of Diane Goudie and Eleanor Moore in creating The Linden School is part of a grand trajectory of opening paths for women to knowledge, helping girls and young women to develop personal and intellectual tools that can contribute to a better world for all. I am certain that Simone de Beauvoir would join us in honouring Diane Goudie and Eleanor Moore for their vision and dedication as educators, and celebrating them as Women of Distinction.”

Since its inception, Linden has pioneered best practices in implementing and evolving an enriched and progressive girl-centred curriculum, deeply resonating with families looking beyond traditional girls’ school settings. Asked to reflect on their accomplishment,  the co-founders now say: “When we founded Linden, girls told us that they had felt silenced in their schools. Therefore, enabling our students to have a voice is an essential tenet at Linden, as it is in all quests for equity, liberation and change. In our curriculum and structures, we teach our students to ask: Who speaks? Who is heard? Who is missing? And who decides who has the voice at any given time and in any place?”

In addition to the YWCA’s recognition, which Diane and Eleanor have recently described as one of the great professional highlights of their lives, their tangible success in applying and developing feminist pedagogy has generated local, national and international recognition for its value to educators. In 2007, Toronto’s York University awarded Diane and Eleanor Honorary Doctorates, and this past month, the school announced that the archives compiled during the school’s founding period have been acquired by the Archives of Ontario. Their work continues to inspire teachers, who in turn share their knowledge and skills through speaking events and Linden-sponsored conferences such as Teaching for Justice, the first event of its kind in Toronto, created by Linden teacher Beth Alexander and former teacher Michelle Munk. 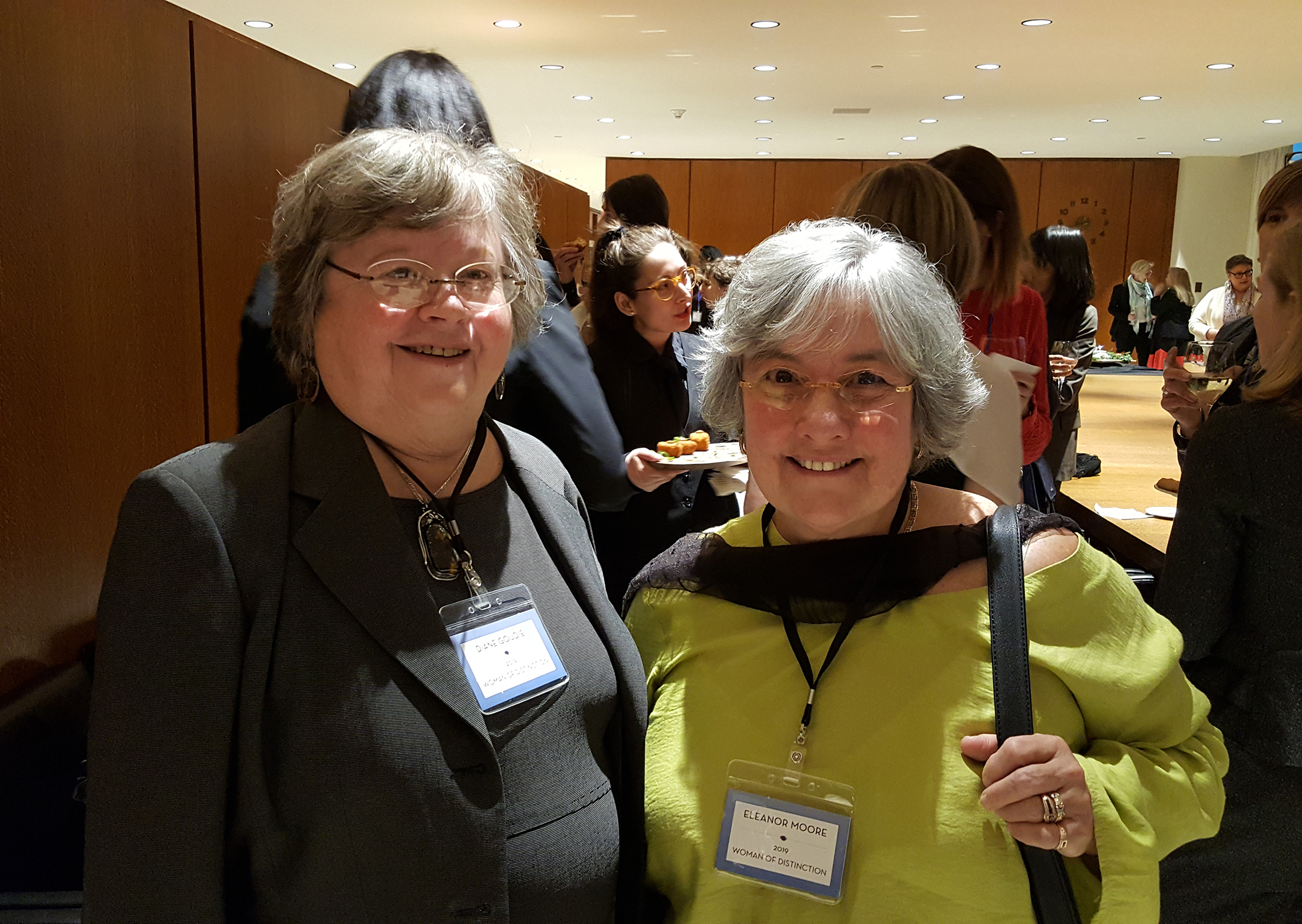 About Diane Goudie and Eleanor Moore:

About The Linden School:

About the YWCA Toronto 2019 Women of Distinction Award:

YWCA Toronto’s Women of Distinction Award, now in its 39th year, recognizes the outstanding contributions of women, and celebrates the advancement of women and girls in our communities. Learn more at www.womenofdistinction.ca

About the YWCA Toronto