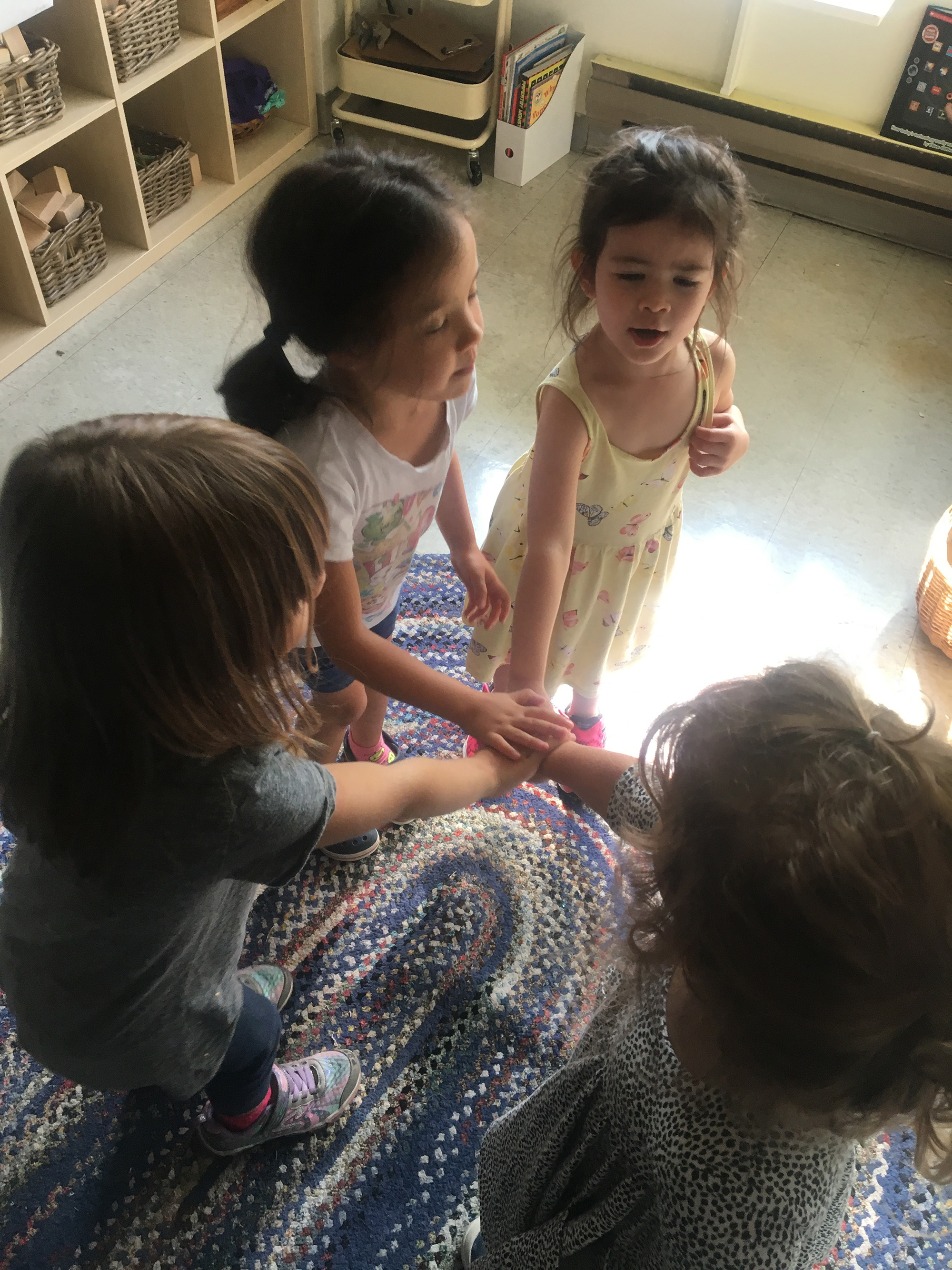 With a couple of weeks under our belts, it feels like the Early Learners are getting into the swing of things at Linden. This week was filled with a lot of interesting learning experiences. On Monday, the students ventured back to our outdoor classroom in the ravine and were challenged to find a stick and imagine what else it could become during a drama game. On Tuesday, our class took a trip around the block, searching for numbers wherever we could find them. On Wednesday, we enjoyed the beautiful, sunny morning recess on the roof. On Thursday, we listened to Spice Girls music and had a dance party. Finally, on Friday we had a visit with two very special people. Enjoy the pictures from the week. 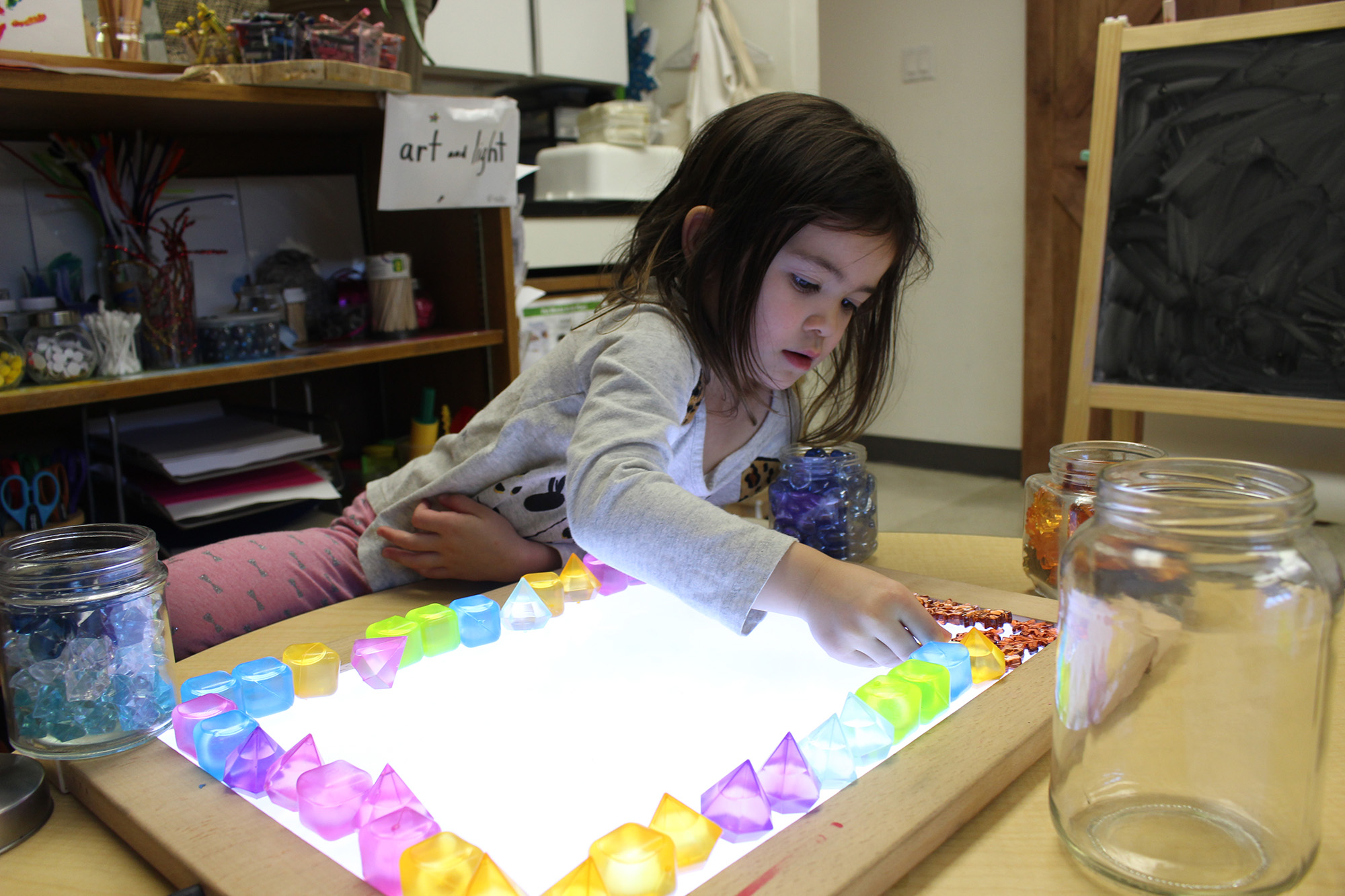 O sets off this morning to explore the light table at the Art and Light centre. After first testing how each material looks on its own with the light, O decides to work on a design that combines the different materials. Her focus and concentration as she works this morning is impressive. 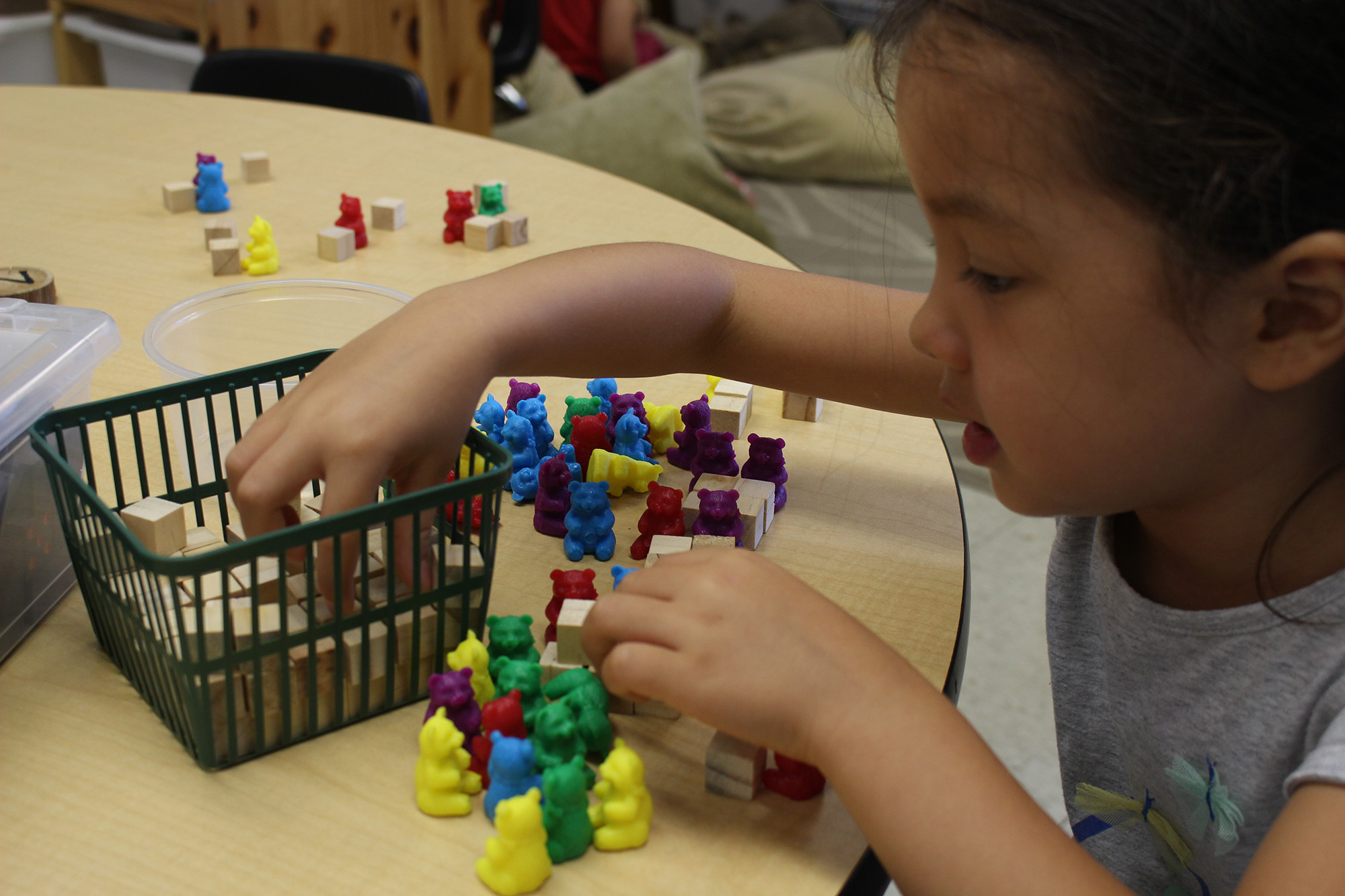 N uses one of her favourite materials, the bears, to create a music class. She counts out the bears that she wants in the class, gives each bear a music stand and instrument (ensuring that this is the same number), and then organizes the bears so it appears that they are in the classroom. She is working on her spatial abilities, organization, and concept of number. 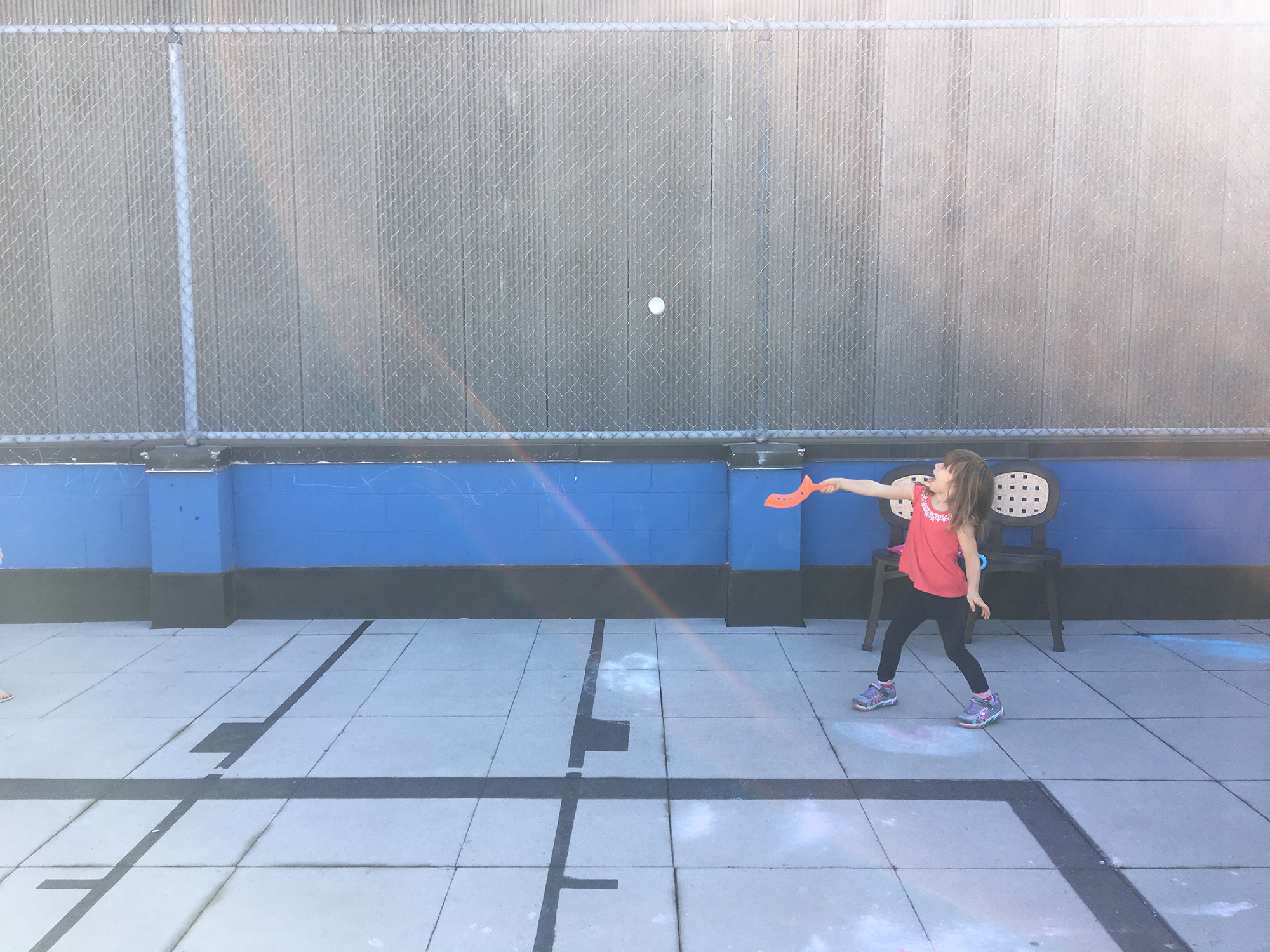 A plays scoop ball with S (not in the picture) during morning recess. This game is very challenging, but A and S are patient as they practice catching the ball in the air or scooping it up off of the ground. 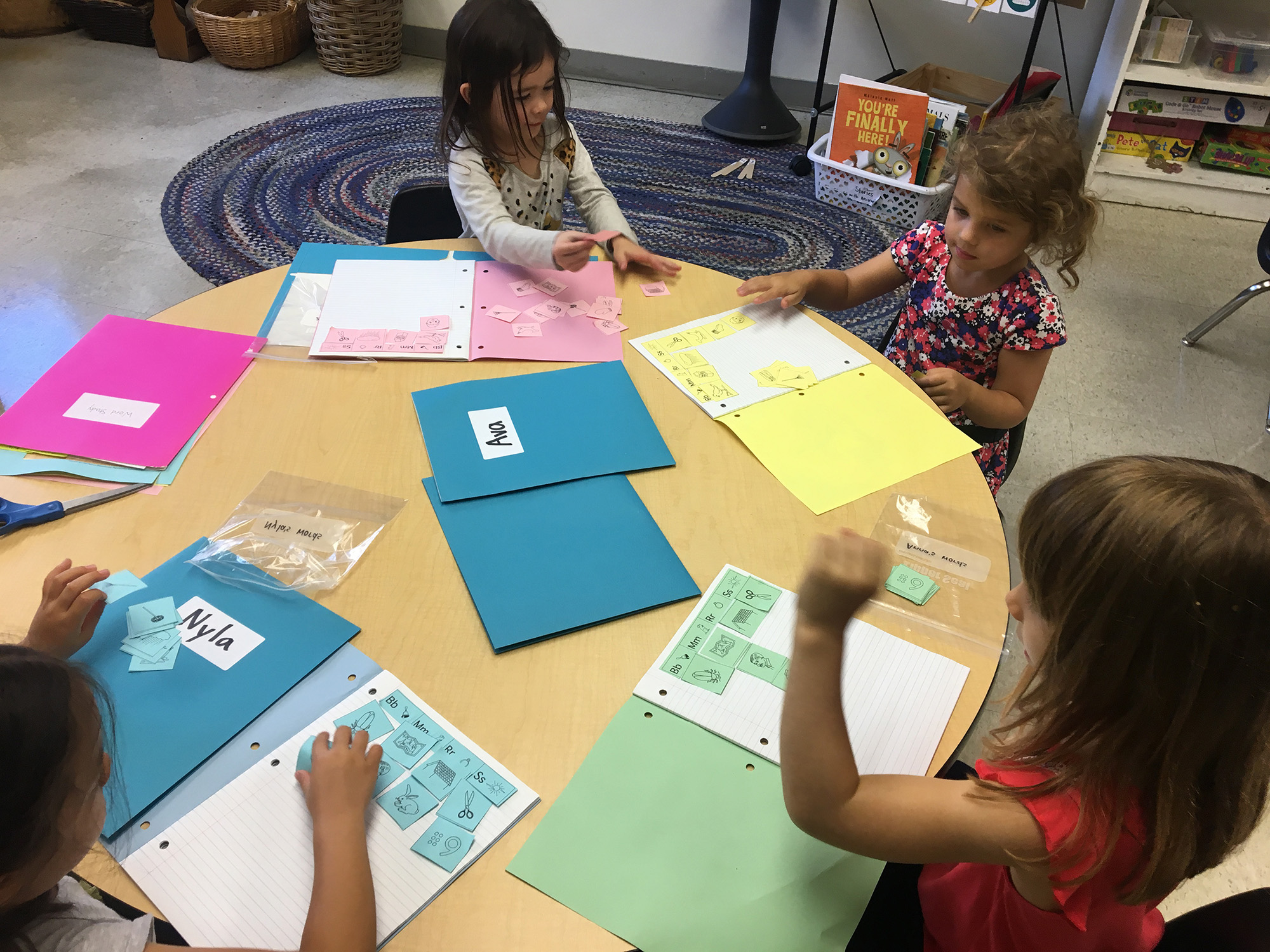 The Early Learners all work on their morning word sorts. This is our first sort of the year, and A and N use their knowledge from last year to help O and A get the hang of sorting by starting sounds. All four girls will be reviewing initial consonant sounds for the next few weeks, practicing the routines and learning how to work independently on a task. 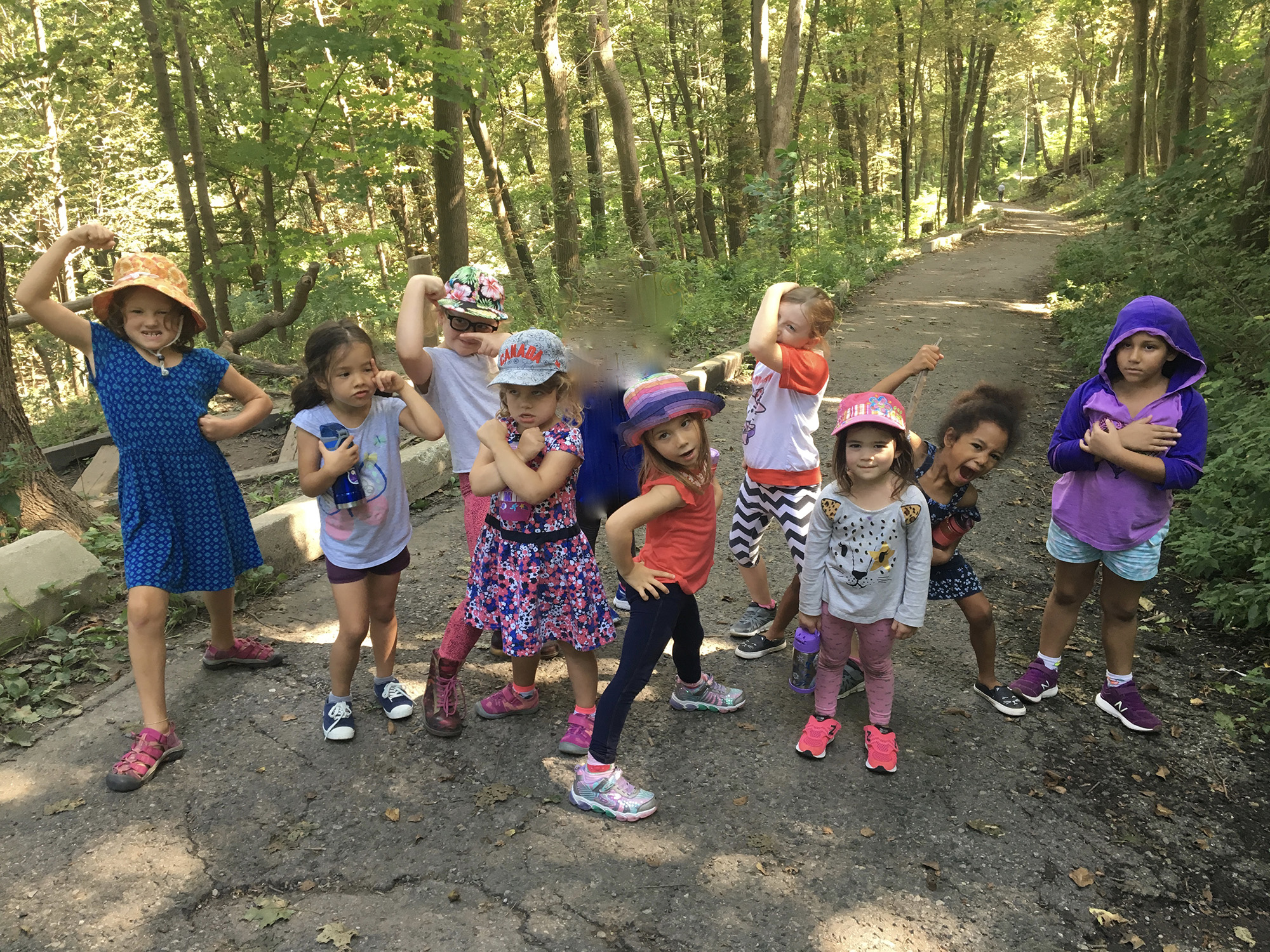 The Early Learners and Grade 1-2s show off their "warrior poses" as we hike down to our outdoor classroom during Monday's Outdoor Education class. 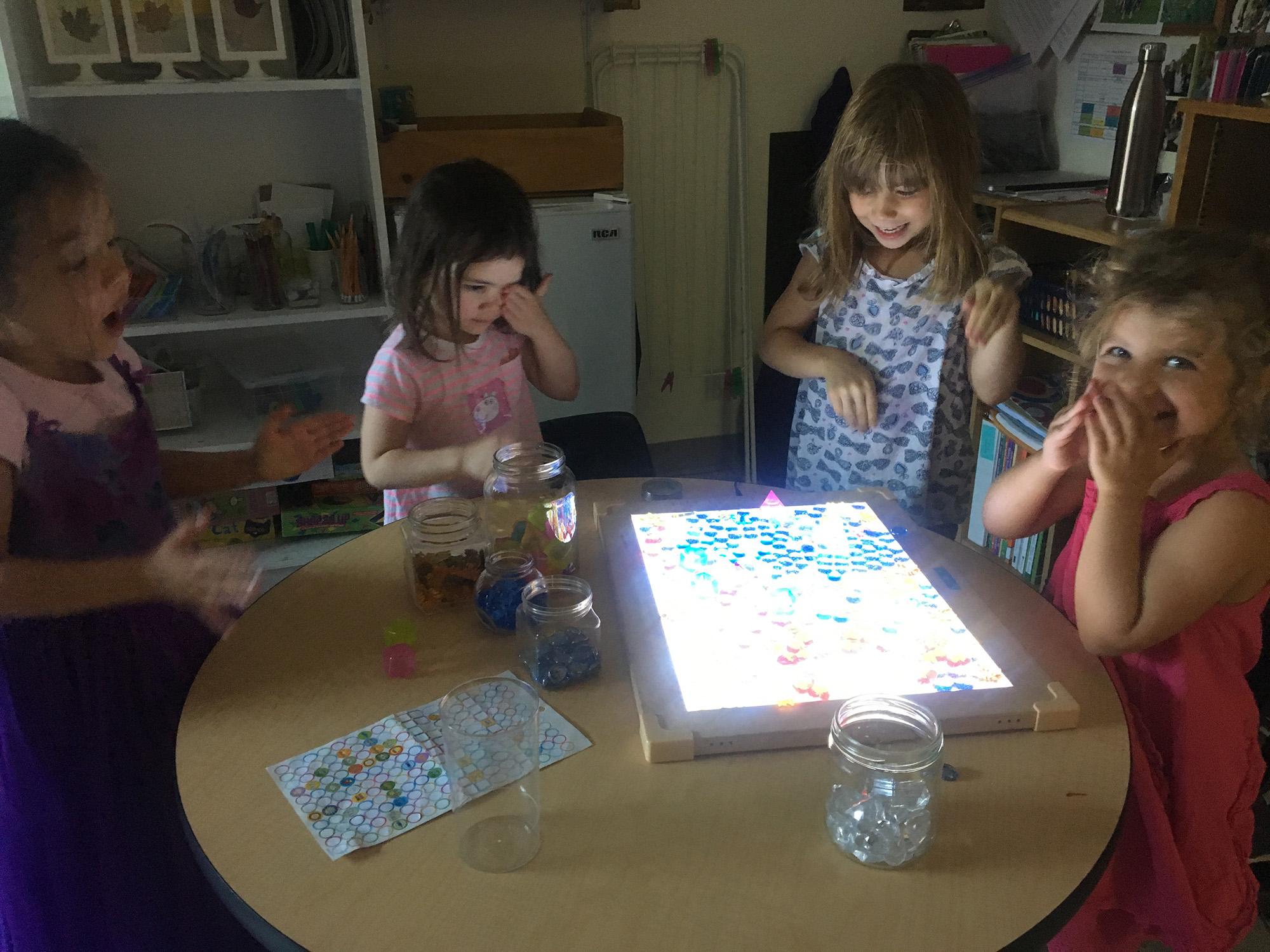 A is thrilled to be sharing her work on the light table with her peers. No matter how many times we have turned the lights off to watch the light table glow, each time continues to be magical for everyone. 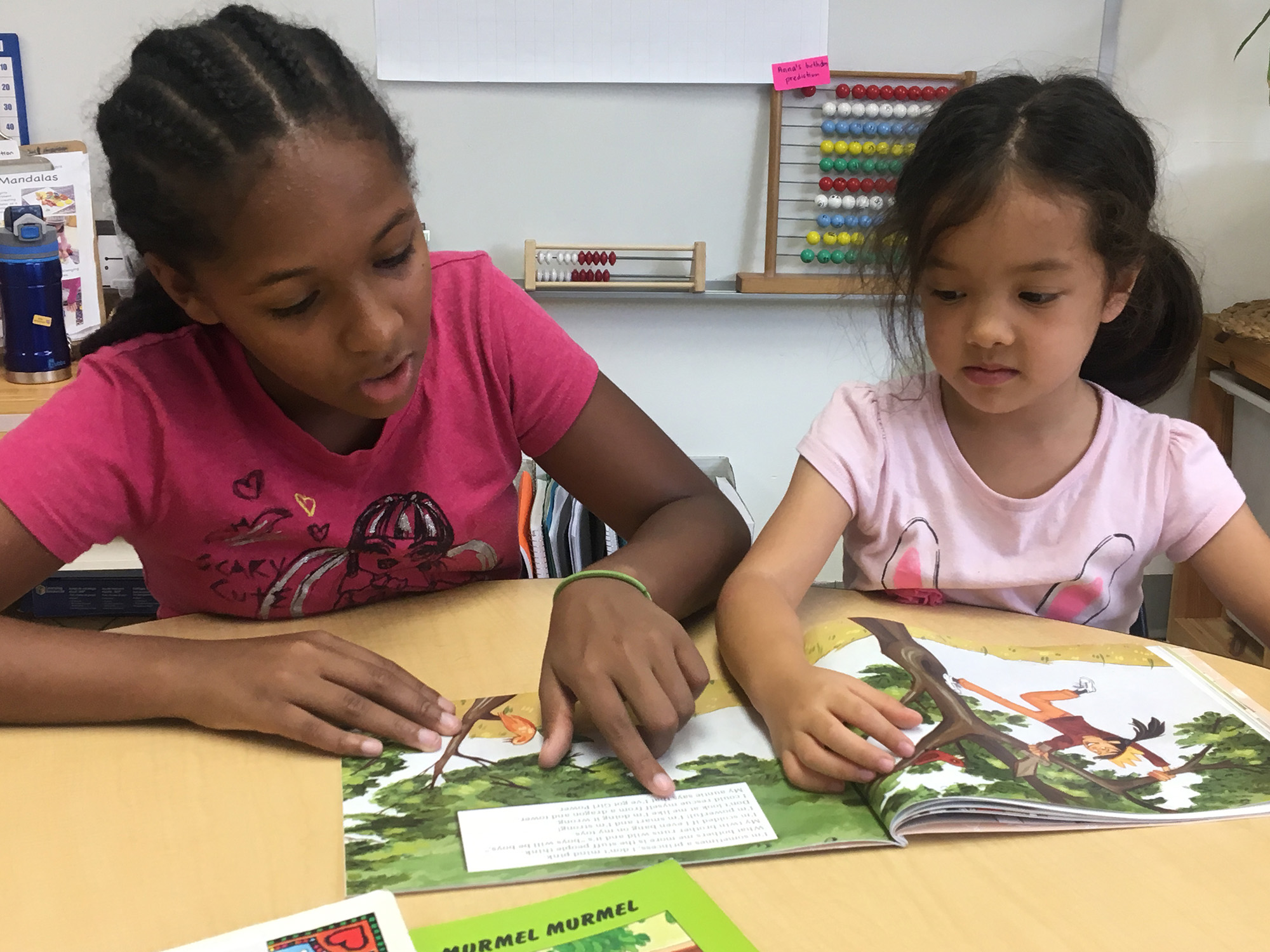 D (grade 6) reads to N during this week's reading buddies time. N loves getting the opportunity to get to choose the books that her reading buddy reads to her, often picking out many of her favourites. 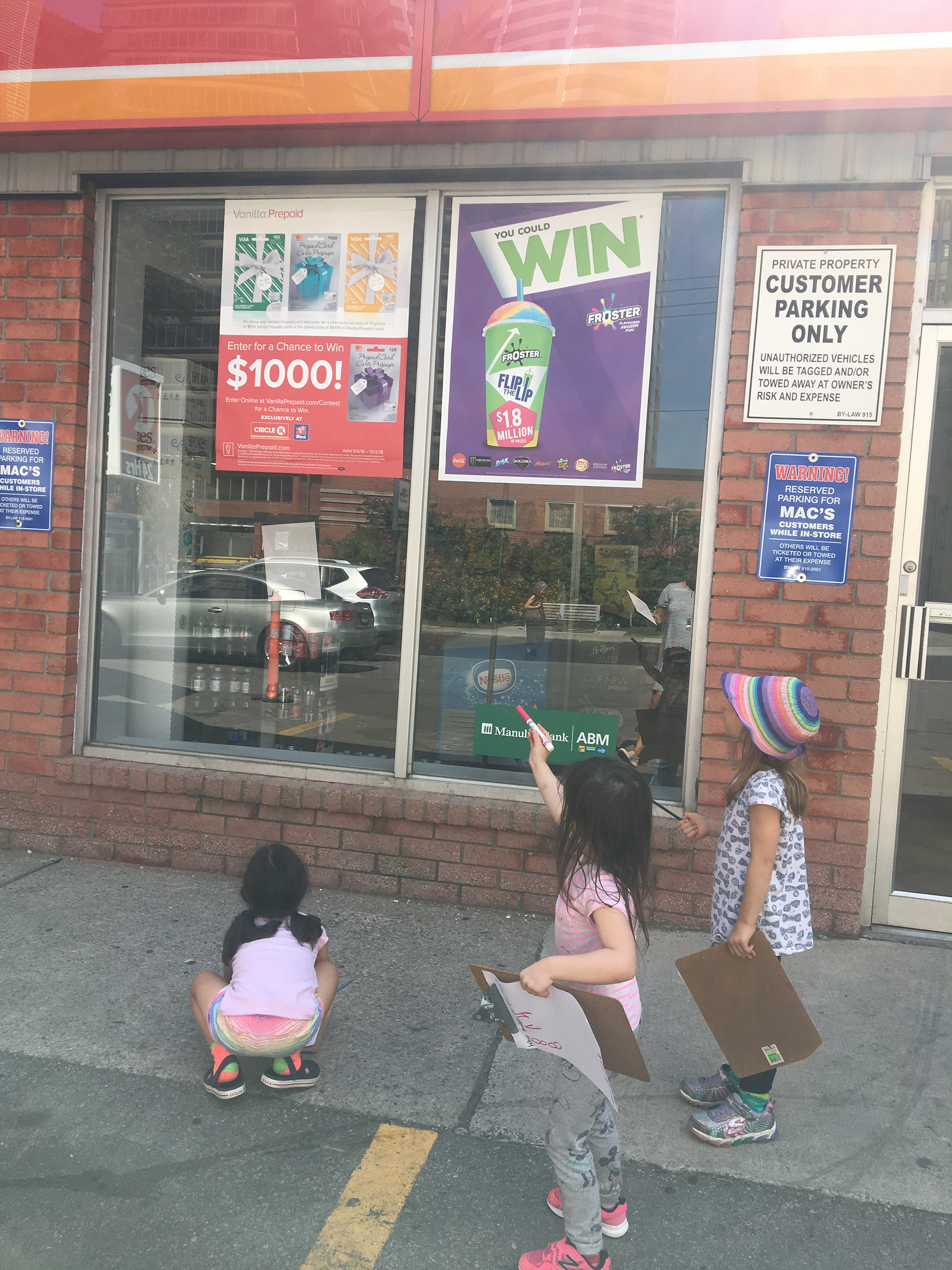 Our class is on a number hunt, and A suggested that we go around the block before looking inside Linden for numbers. Before heading out each student predicted some numbers that we might see, one being 1000. The girls are so excited to find 1000 on the sign at the Circle K store. 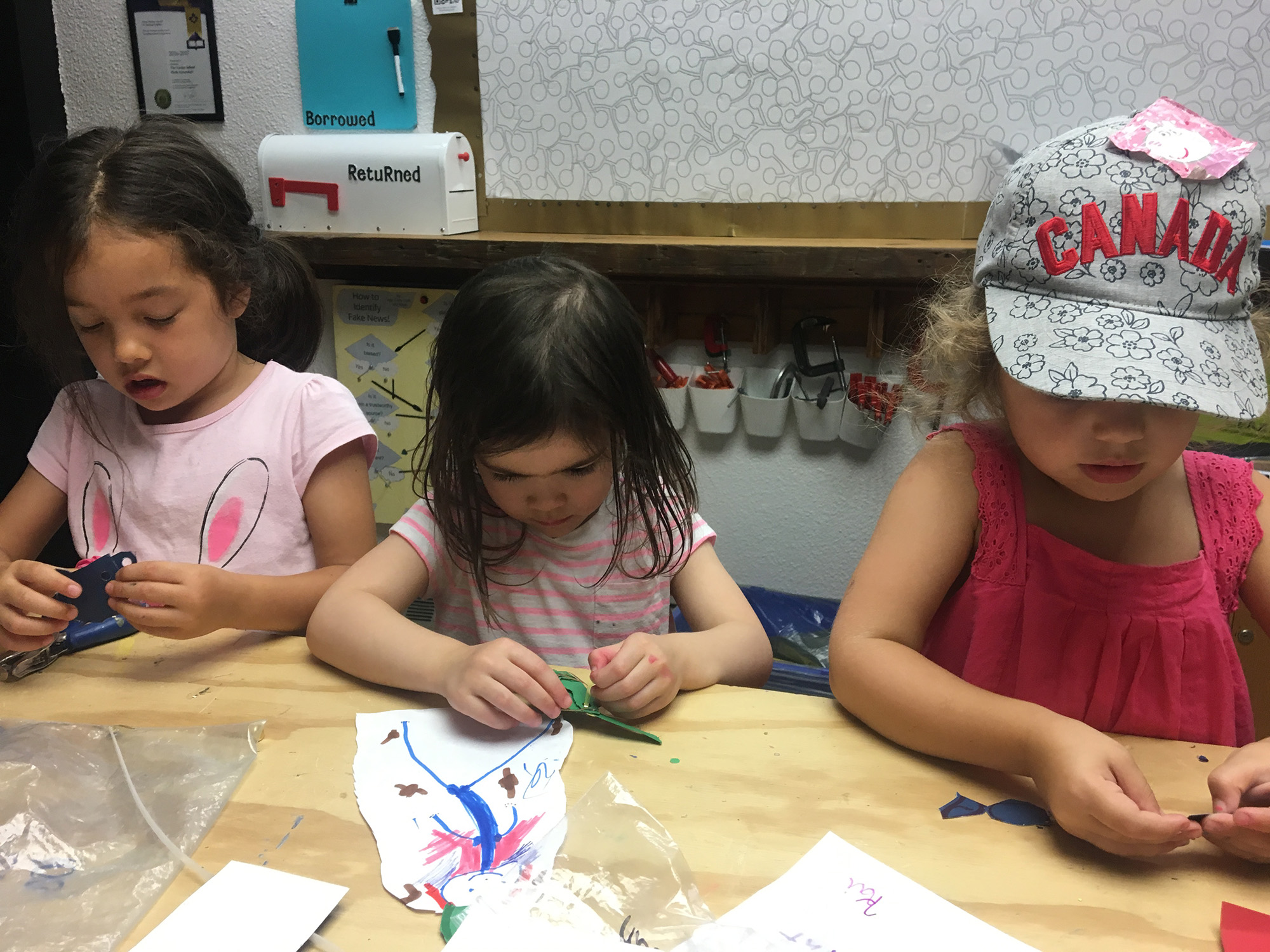 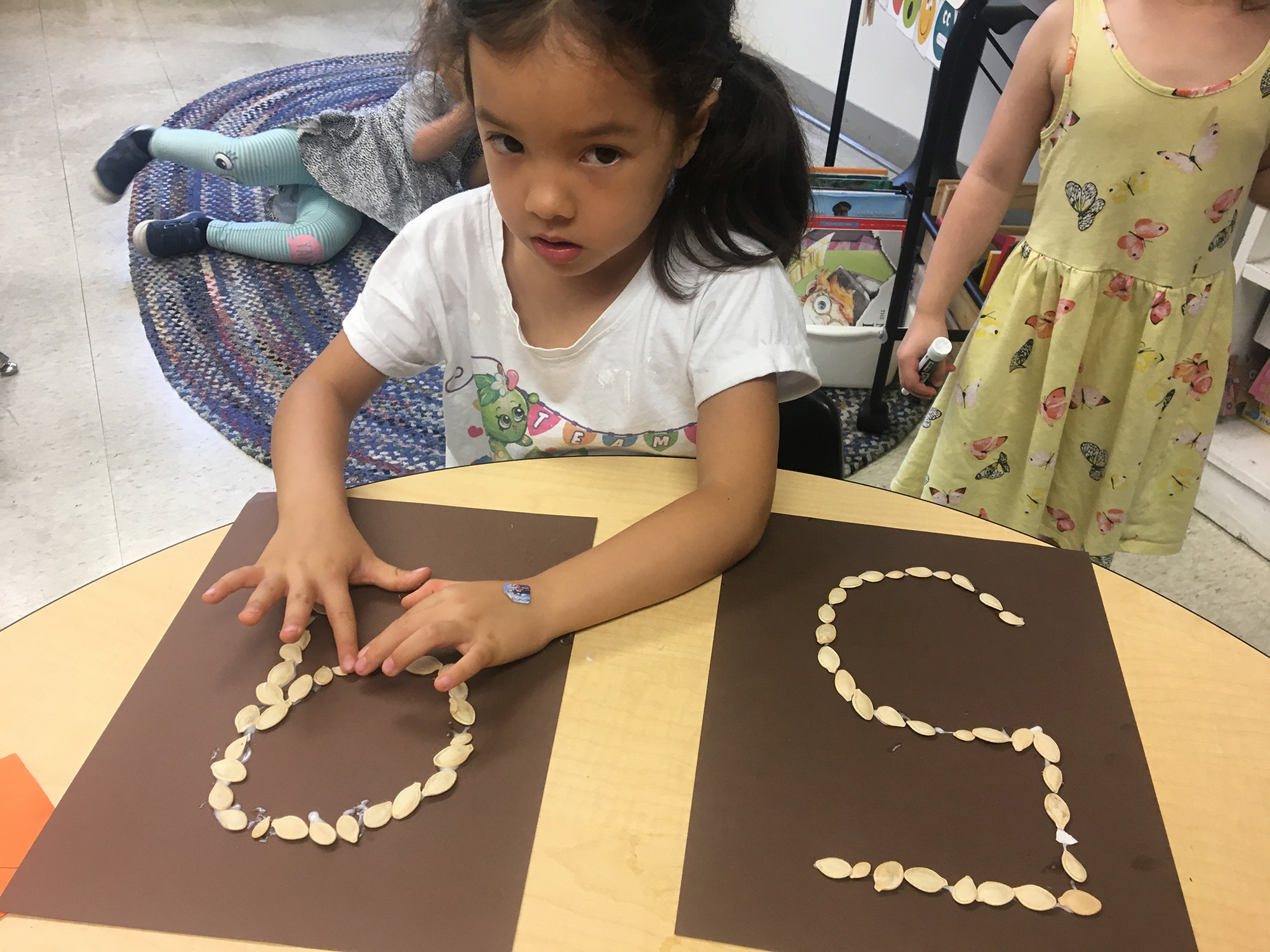 After our number hunt, the Early Learners suggested that we should have large numbers in the classroom like our large letters on the wall. They decided to use pumpkin seeds instead of sticks because they would stand out better on the dark brown background. N is finishing up the last two numbers for our number line. 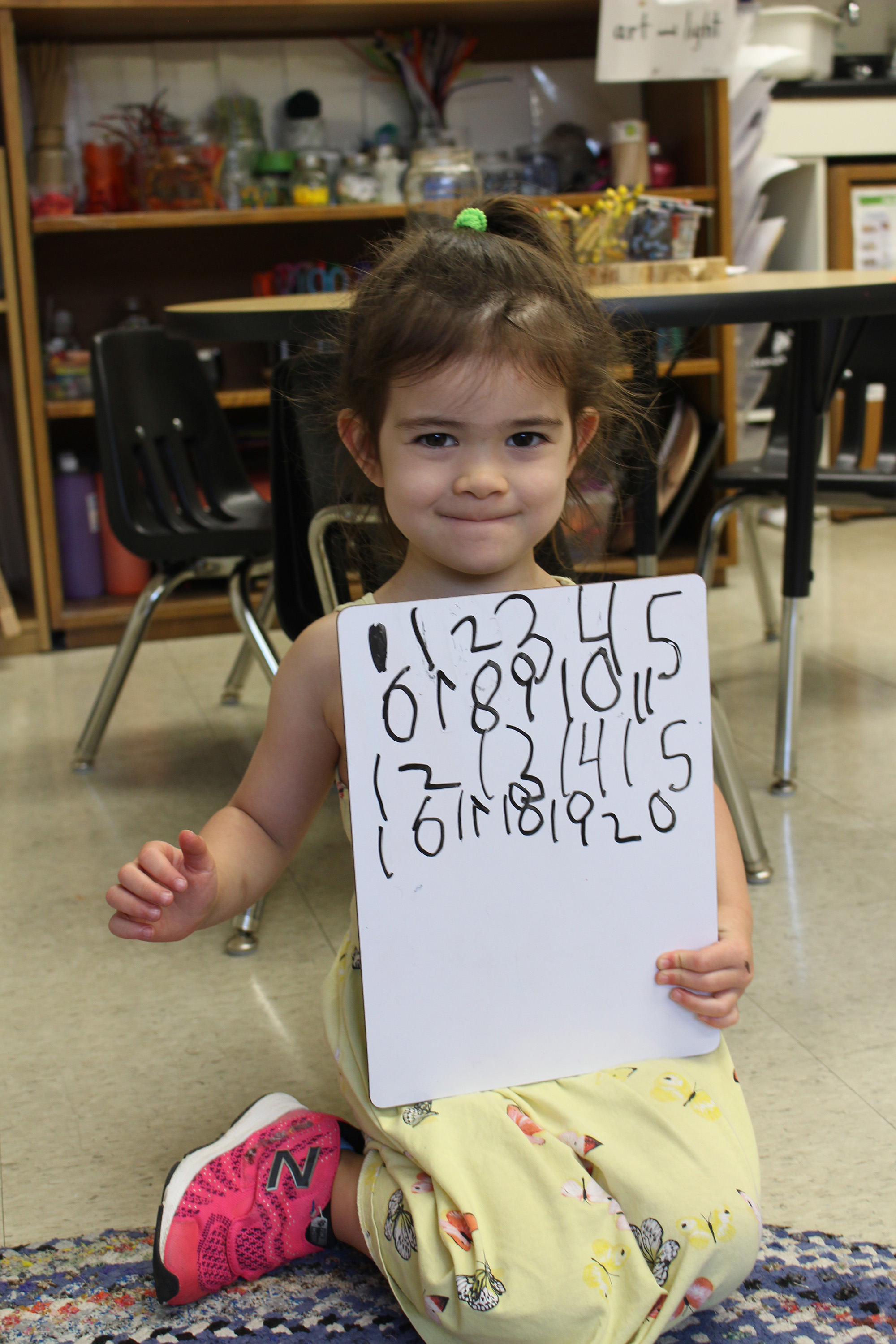 O chose to write out the numbers on a practice board this morning after she finished her morning writing. She was curious about the correct order of the numerals in 12, and after discussing that the one comes first, she managed to write the rest of the numbers independently. Well done! 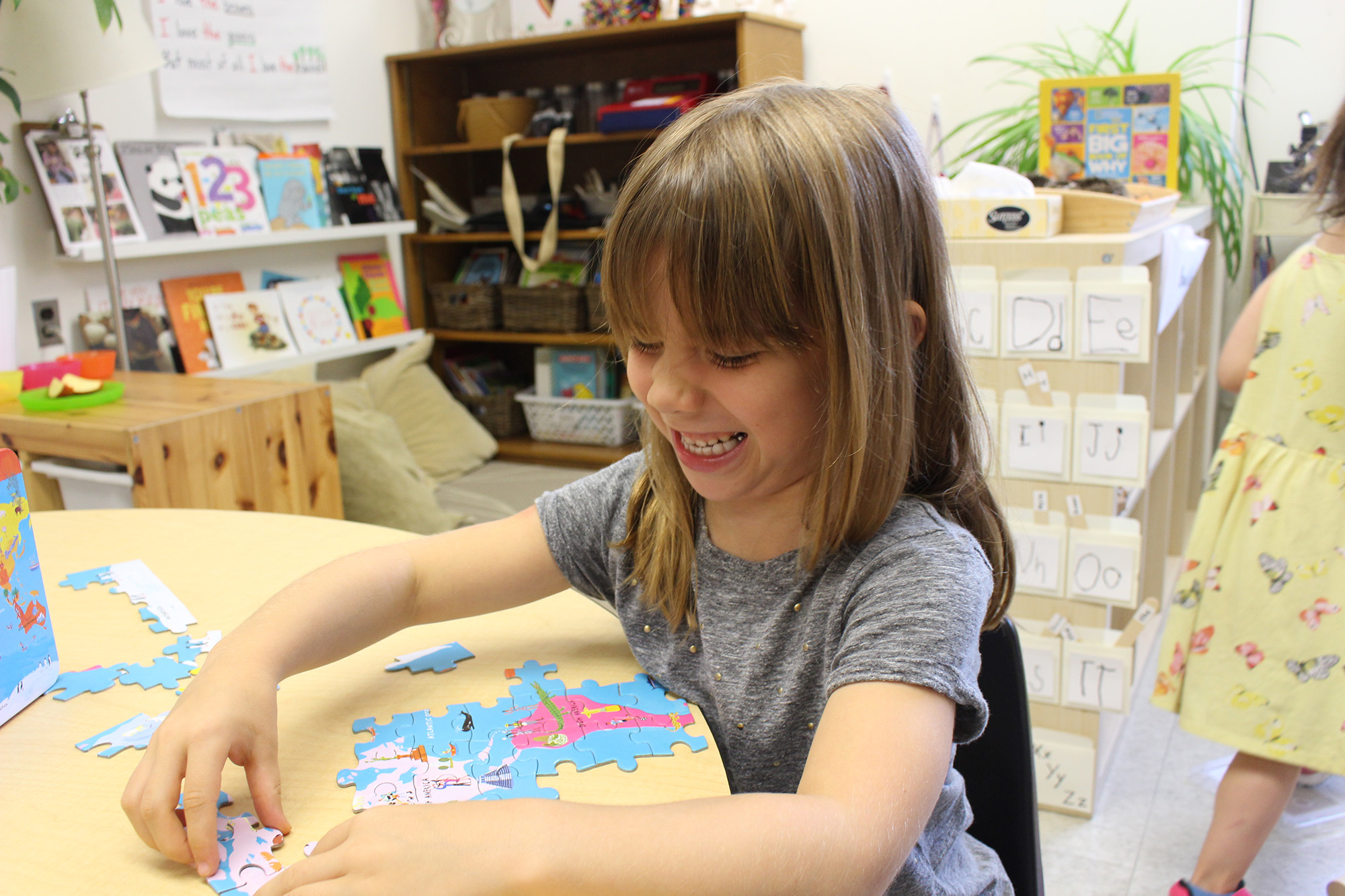 A giggles with excitement as she finds the piece that she needed to connect two separate parts on the puzzle. Despite the puzzle being 100 pieces, A didn't let that discourage her from seeing how much she could get done during centres. 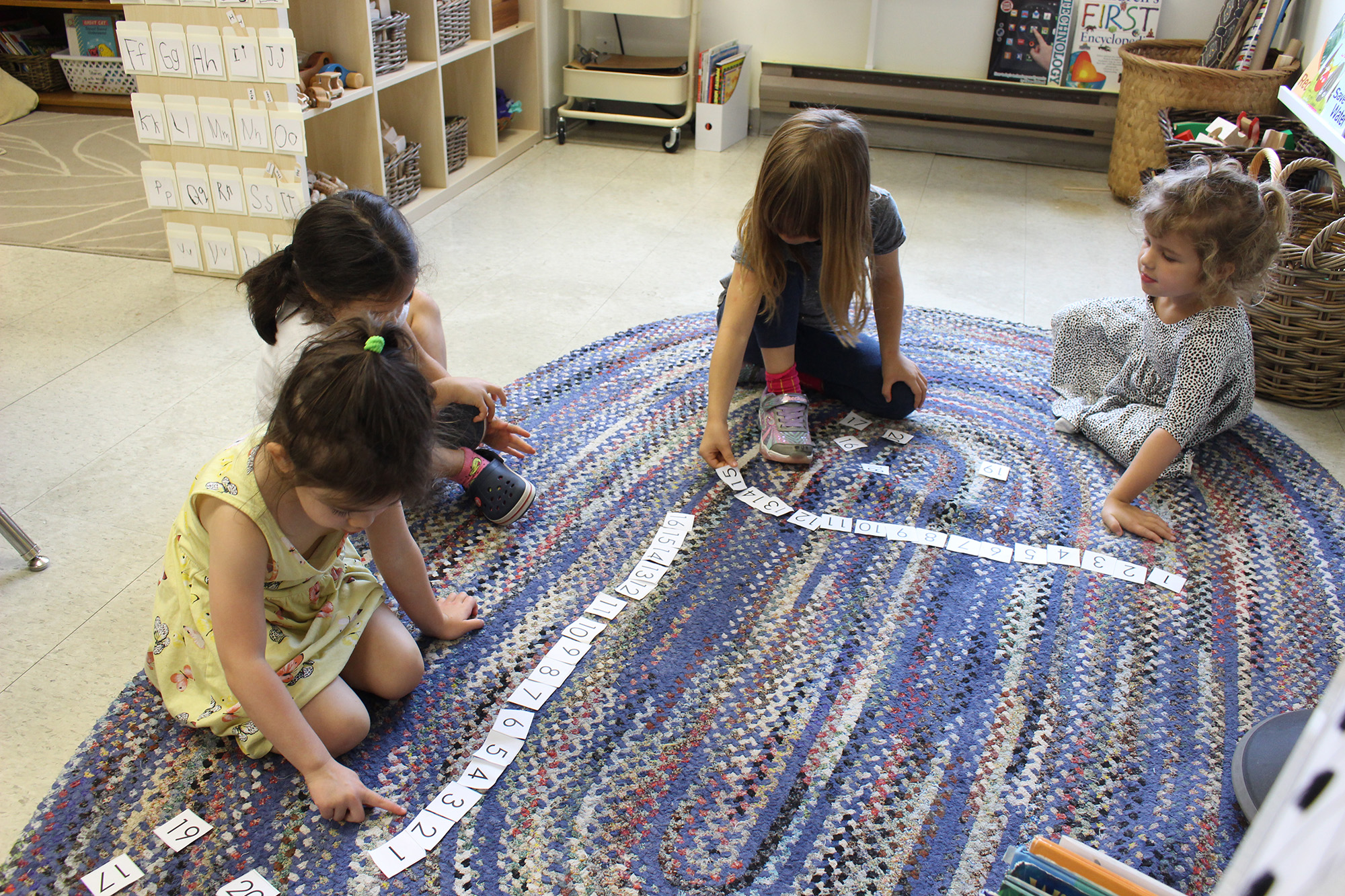 The students work in partners to arrange the numbers from 1-20 in numerical order. Not only did the students need to use their number knowledge for this challenge, but they also had to work collaboratively with their partner to put the numbers in the correct sequence. This activity is particularly good for practicing and reviewing numbers between 11-20, which can be more challenging because of their irregular names. 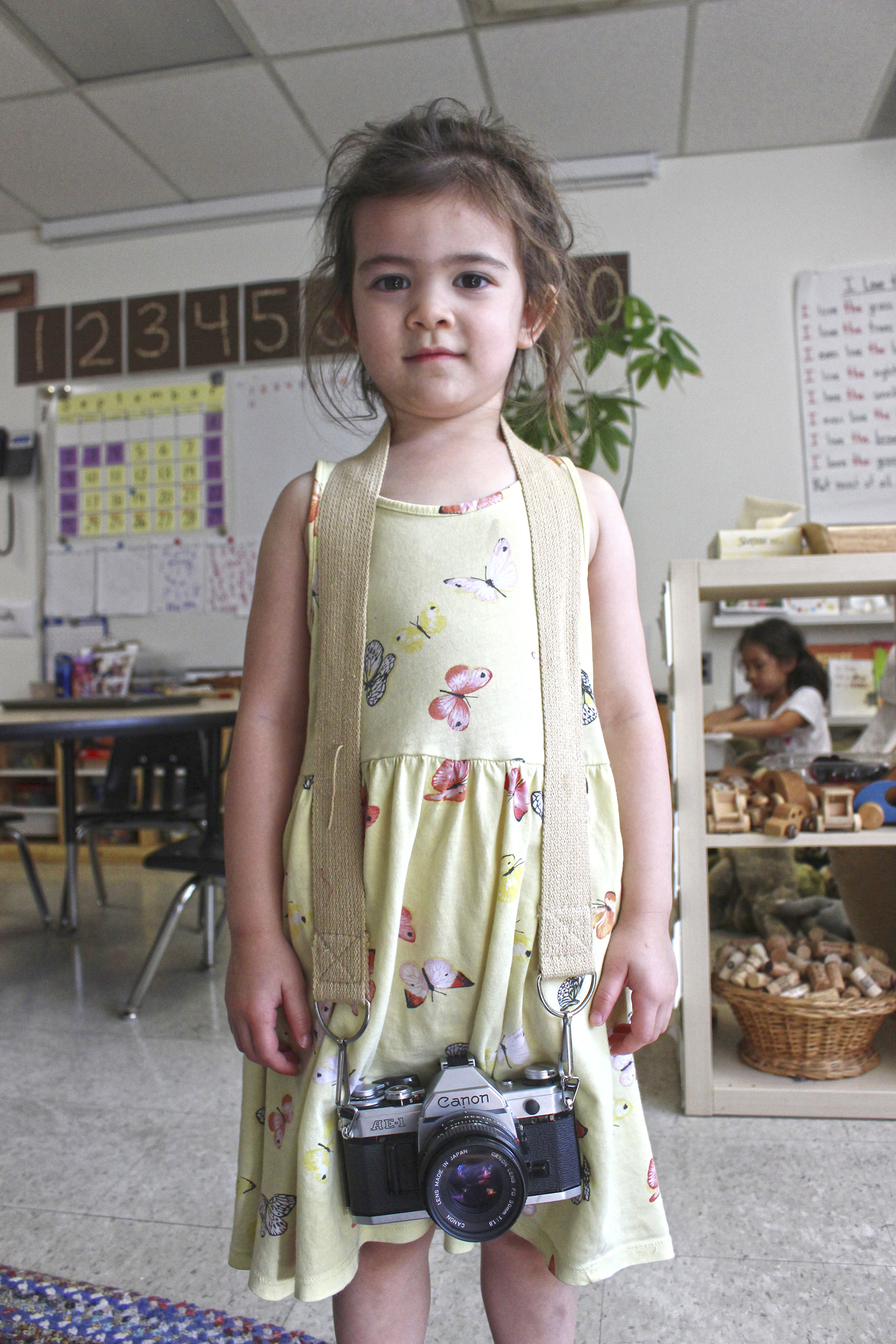 O loves the old camera that we have in the Drama centre. She enjoys going up to her classmates while they are working and "documenting" their learning. O is practicing taking pictures of the details in their work while also listening to what they are working on. 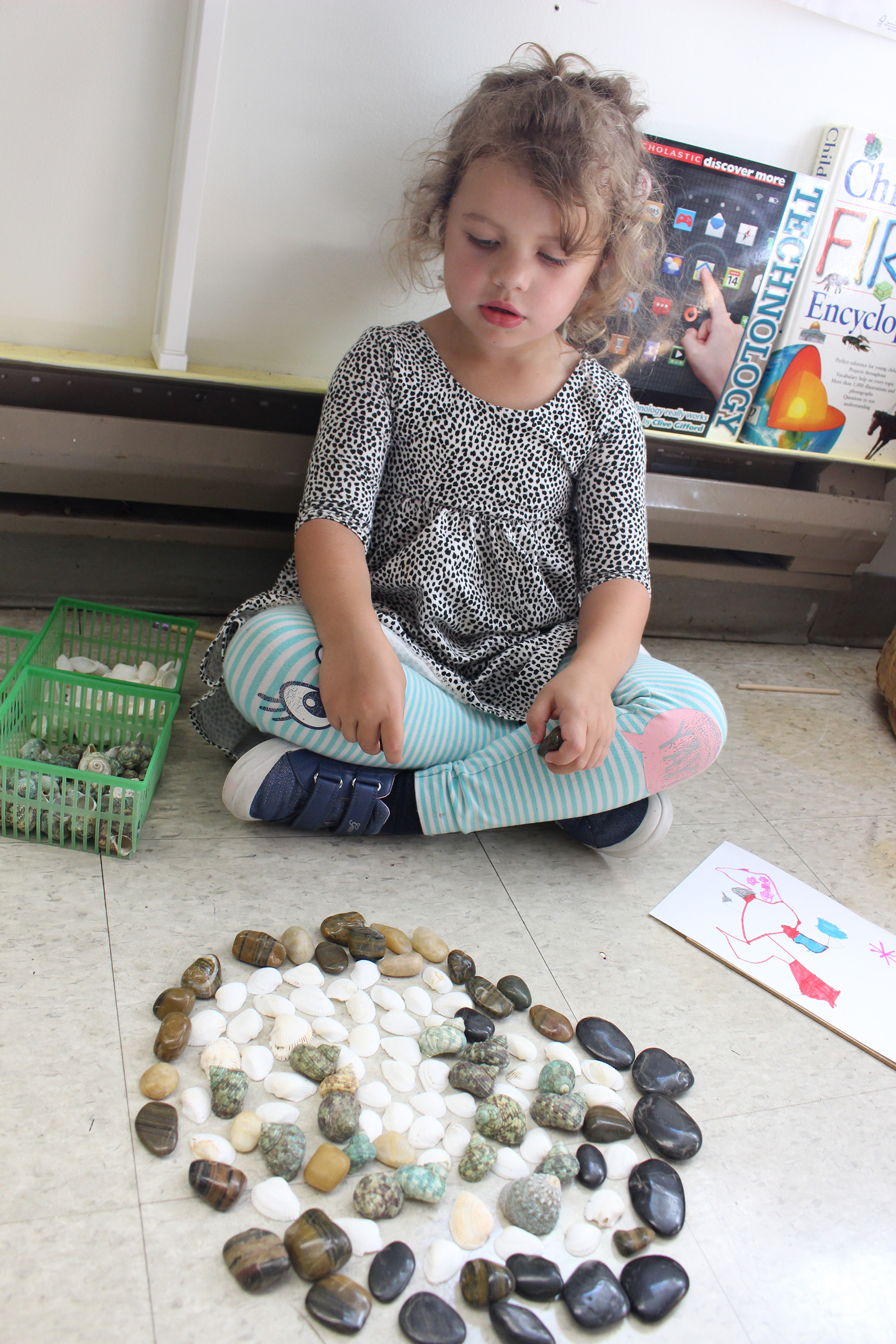 A uses the materials at the Discovery centre to tell a nature story. There are shells mixed in with the "snow", and the rocks are around the edges. 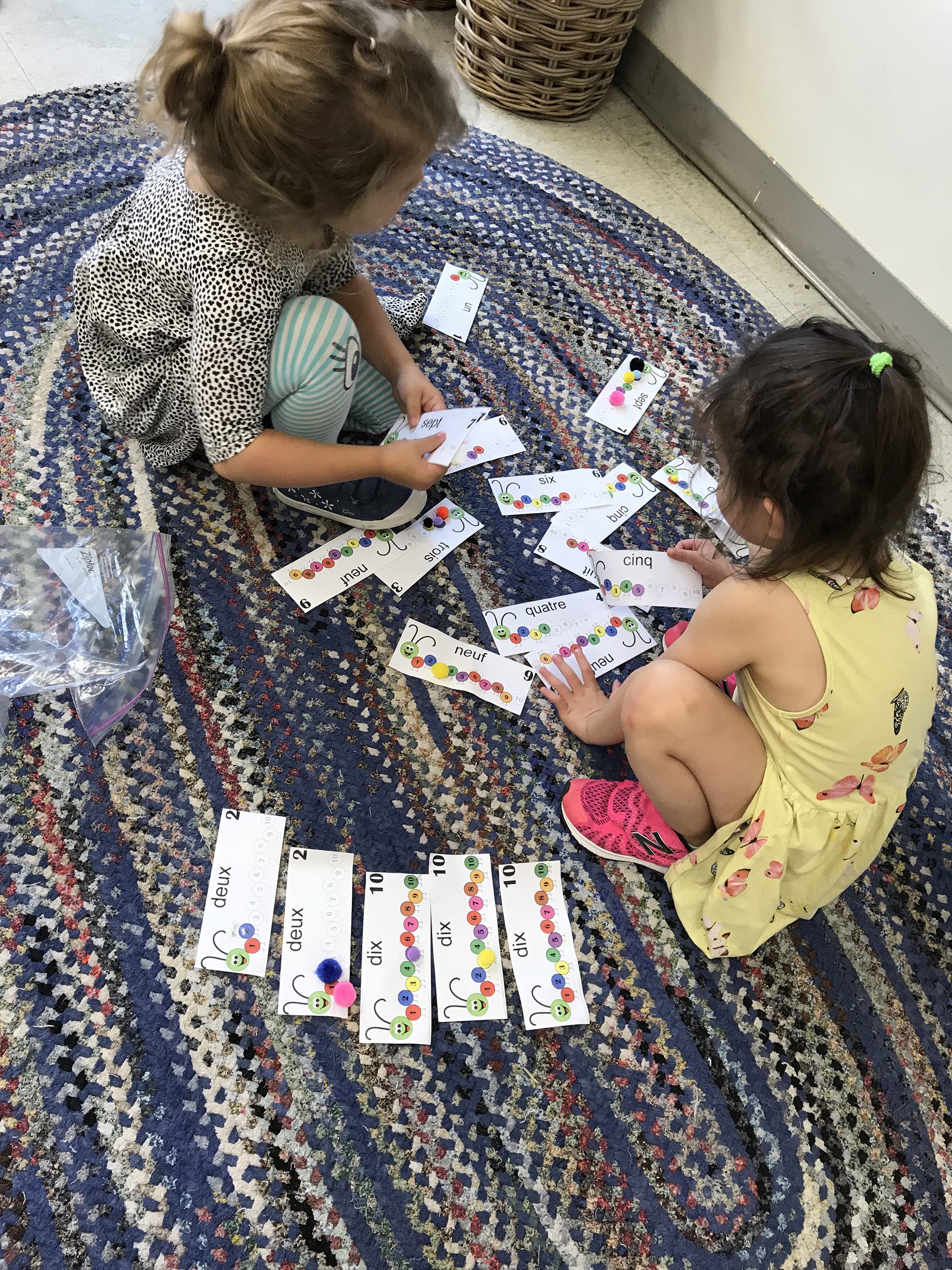 A and O work together during French to match up the numbers into pairs. They are learning the number words for numbers from 1-10. 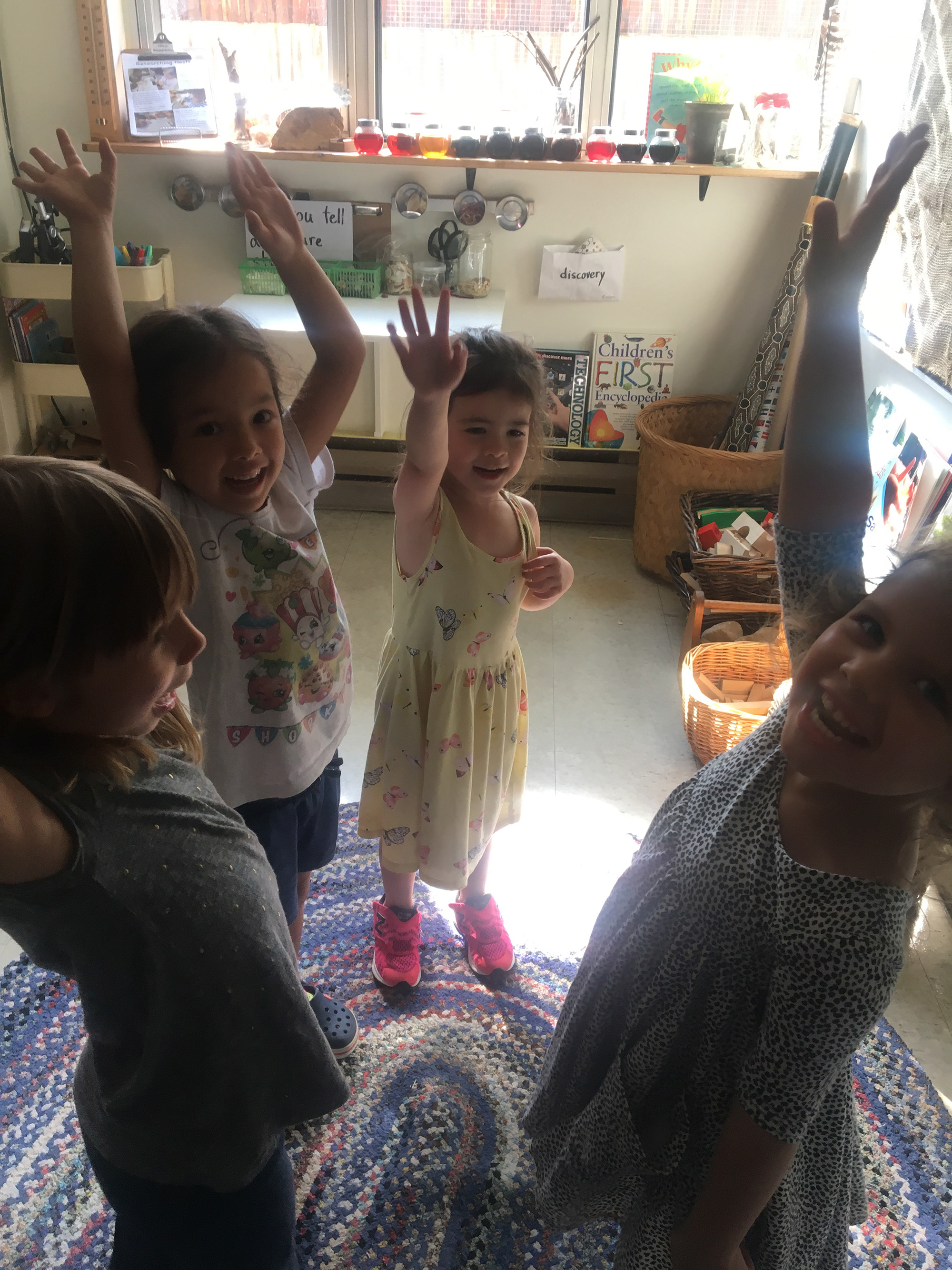 After a fantastic dance party post-tidy-up, the Early Learners huddle up and cheer "go team!". 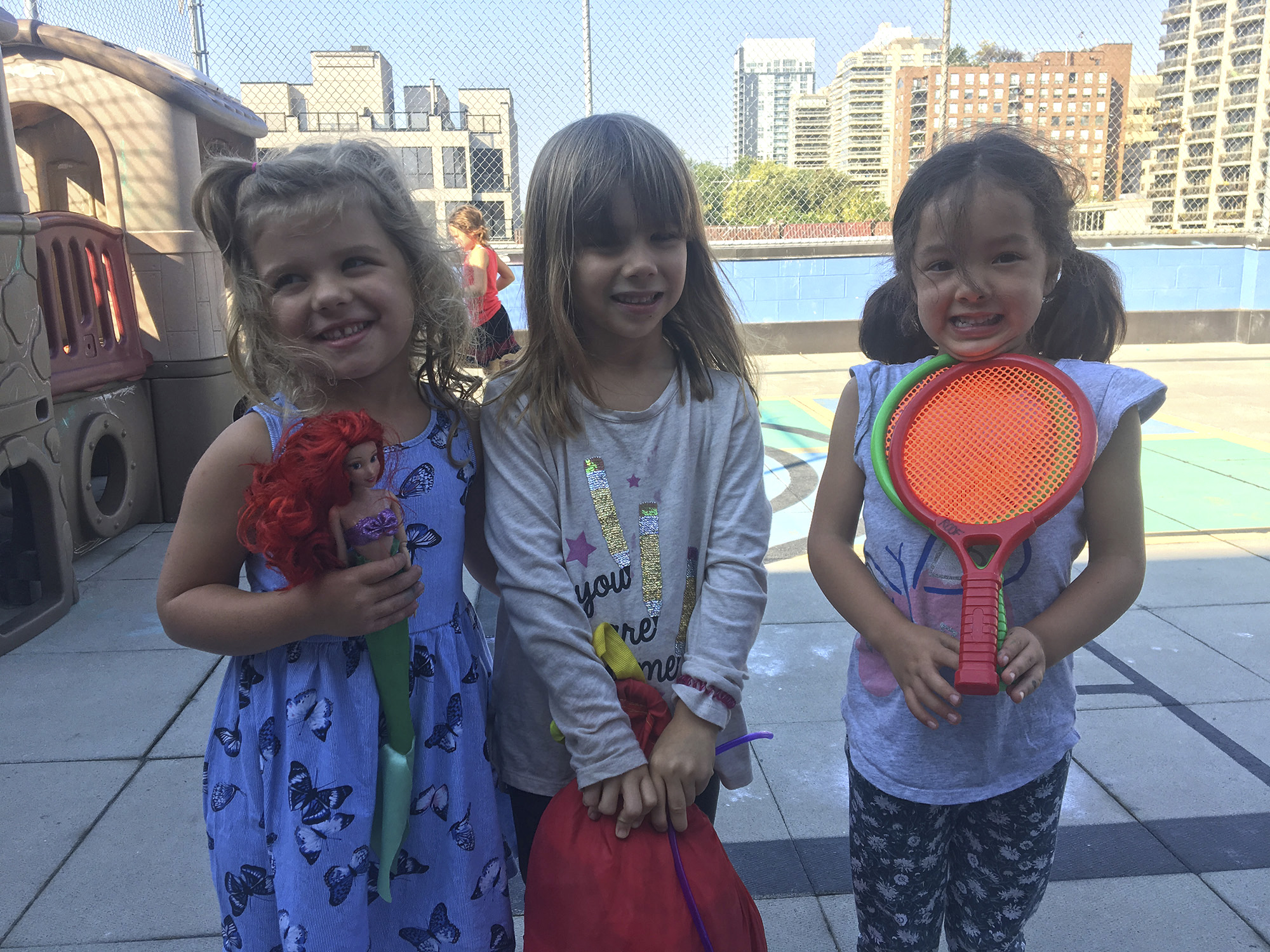 These three are playing "family" this morning during recess, with AK being the mom, N being the big sister, and AB being the little sister. 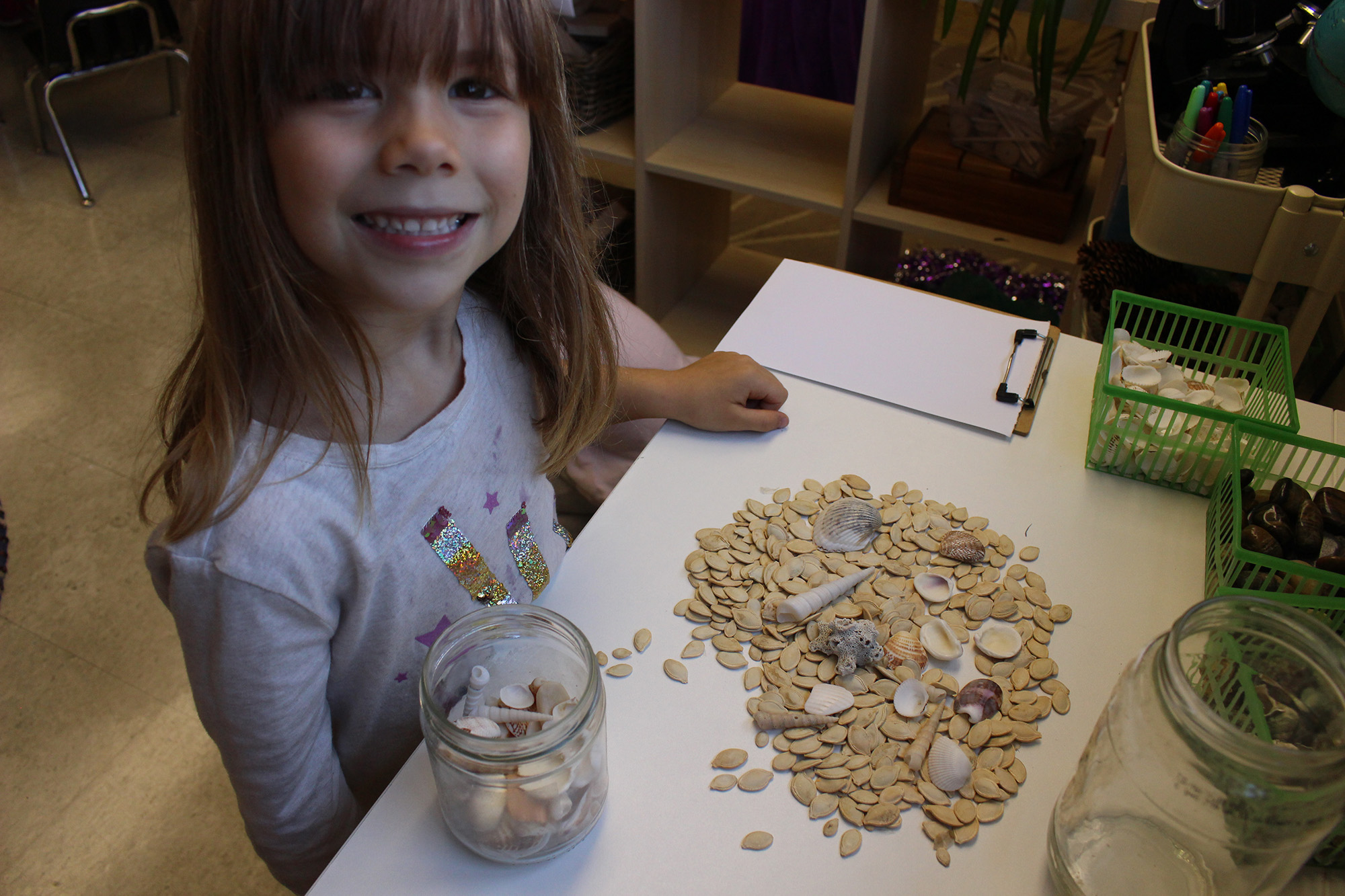 Inspired by her peers' work throughout the week, A creates a nature story about the weather and the beach. 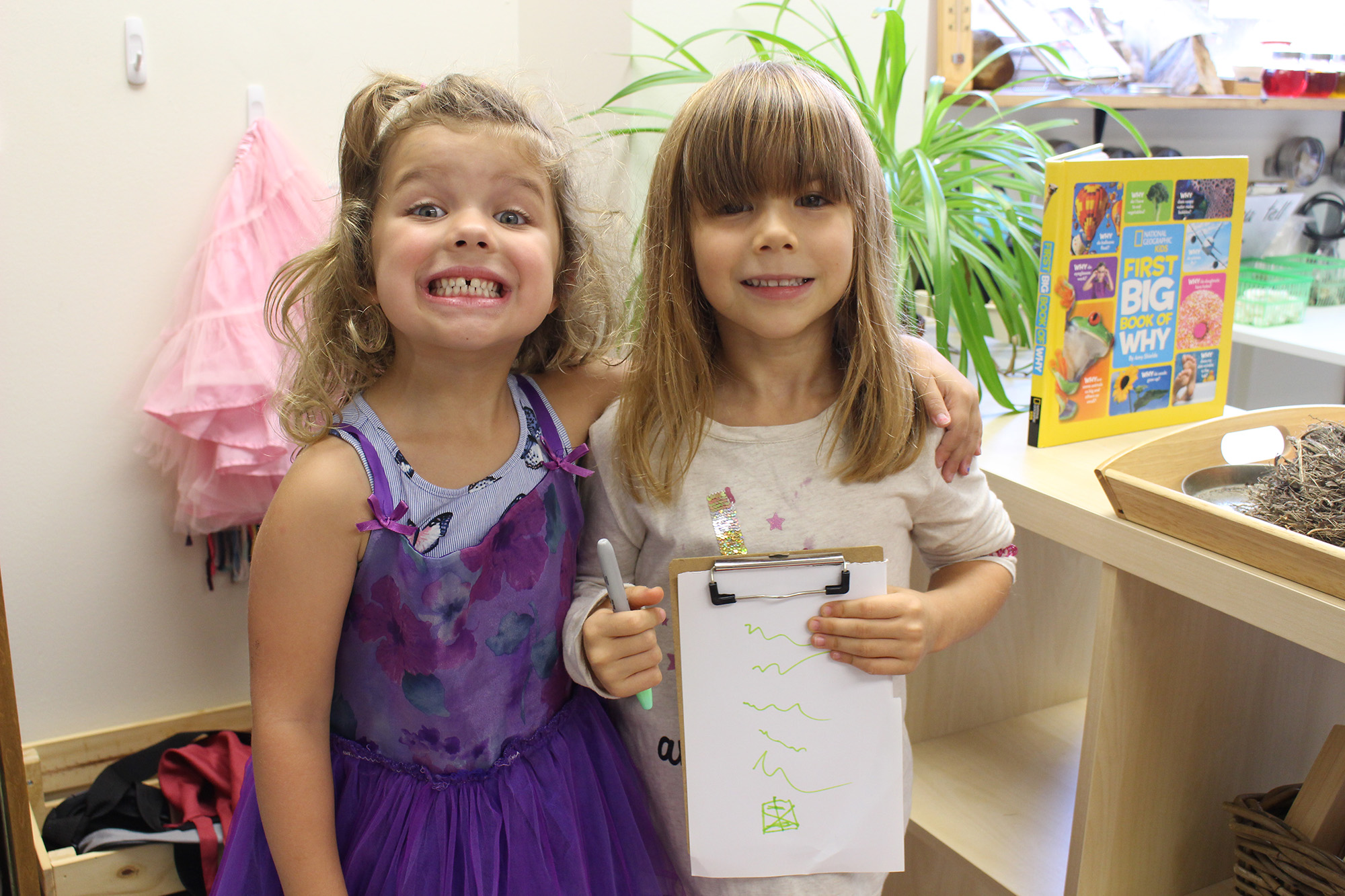 While at Drama, AB pretends to be the mayor and makes many important calls from her office. She asks different classmates to come have meetings with her, and AK is inspired to become a second mayor, one who takes care of science and the environment (because she is learning at Discovery). AK makes some notes about recycling and taking care of the earth, and then she shares them with the other mayor for approval. 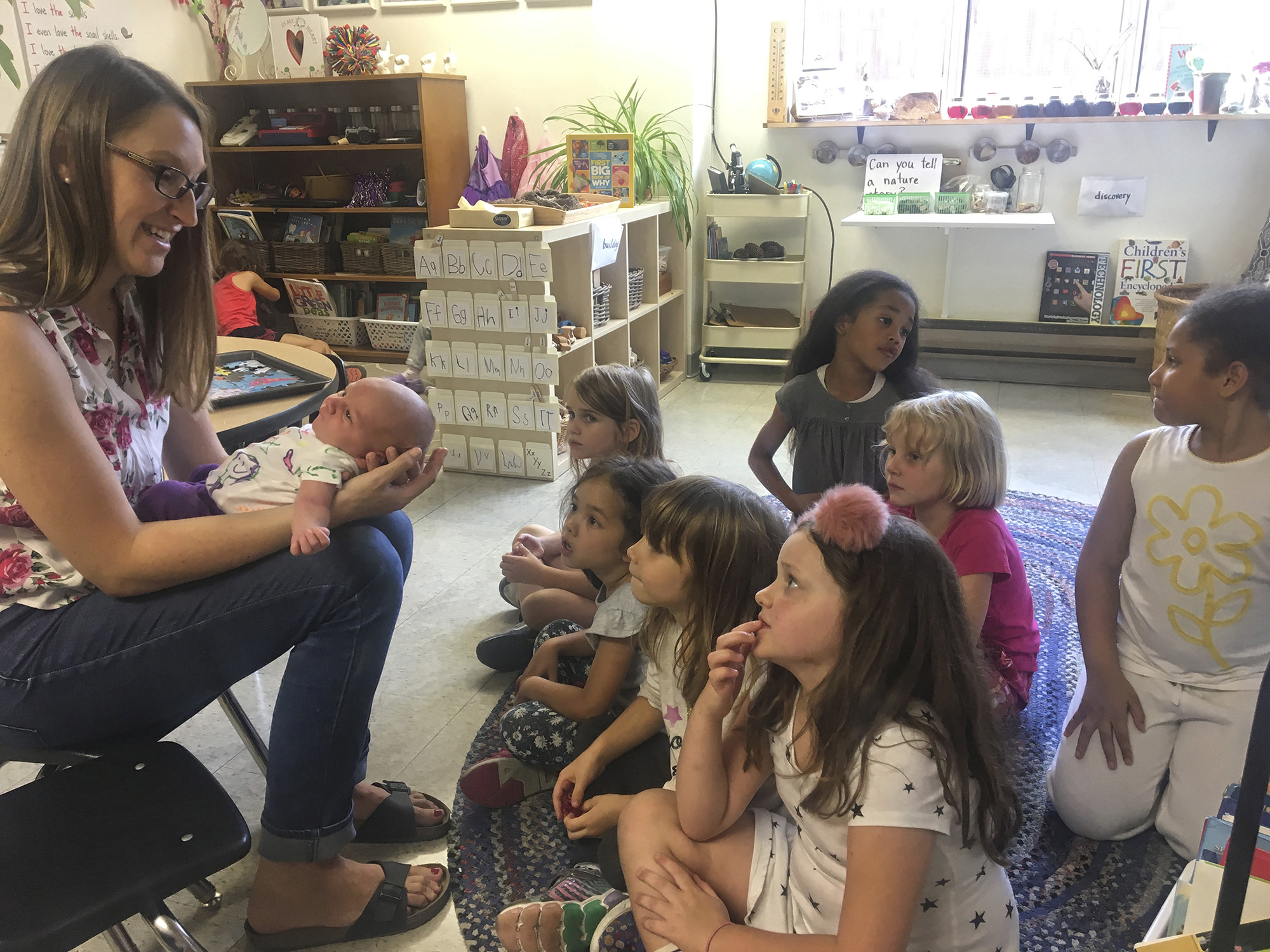 Many of the students are excited to see Soteira and baby Evryn this afternoon. They have so many questions for her, most being about birthmarks, eating, sleeping, and what it is like for Soteira to be a mom. We look forward to watching Evryn grow and learning more about them on their next visit. Thanks for visiting! 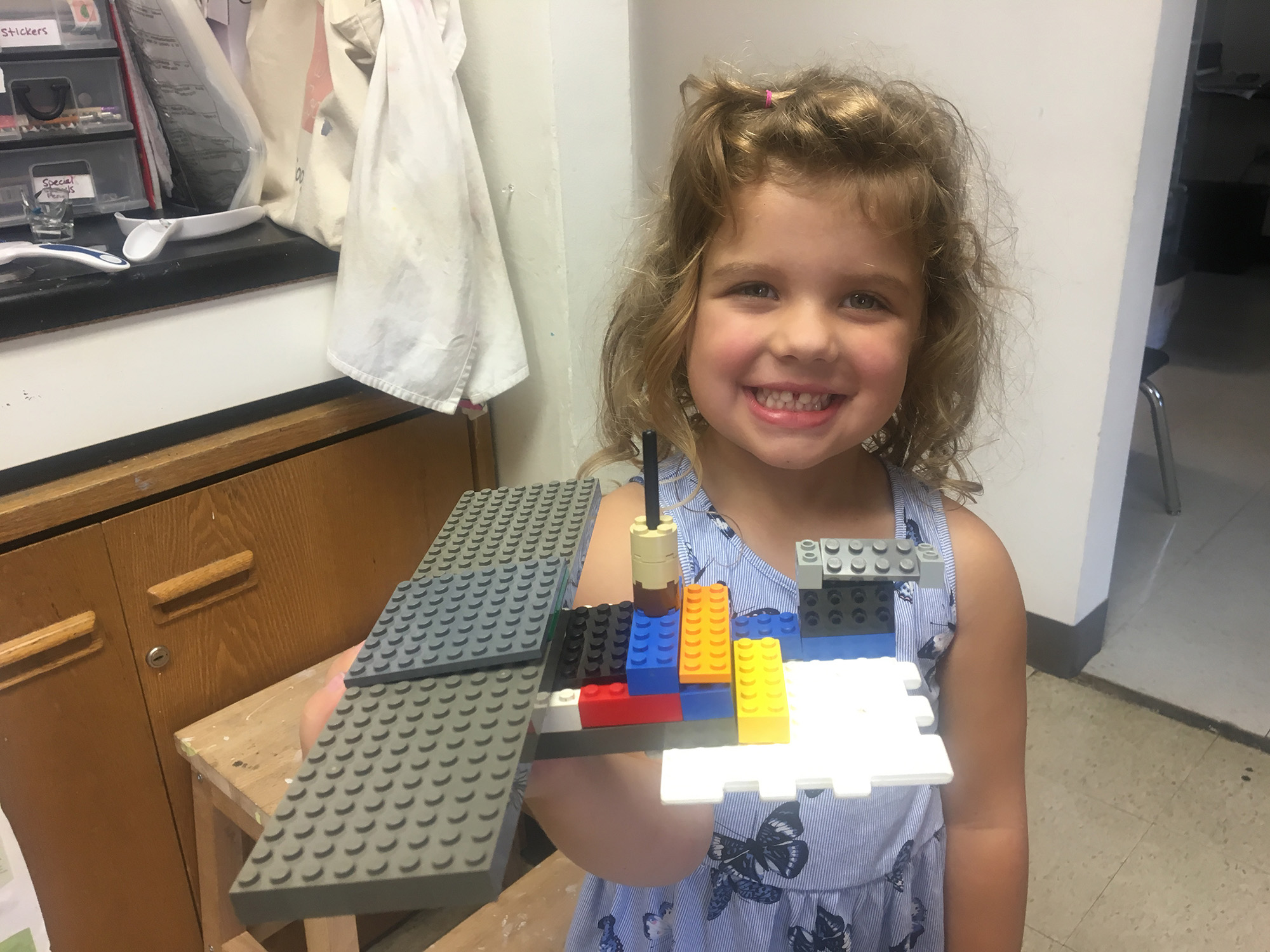 A is proud to share the flying structure that she built during this afternoon's "shared centres" with the grade 1-2 class.