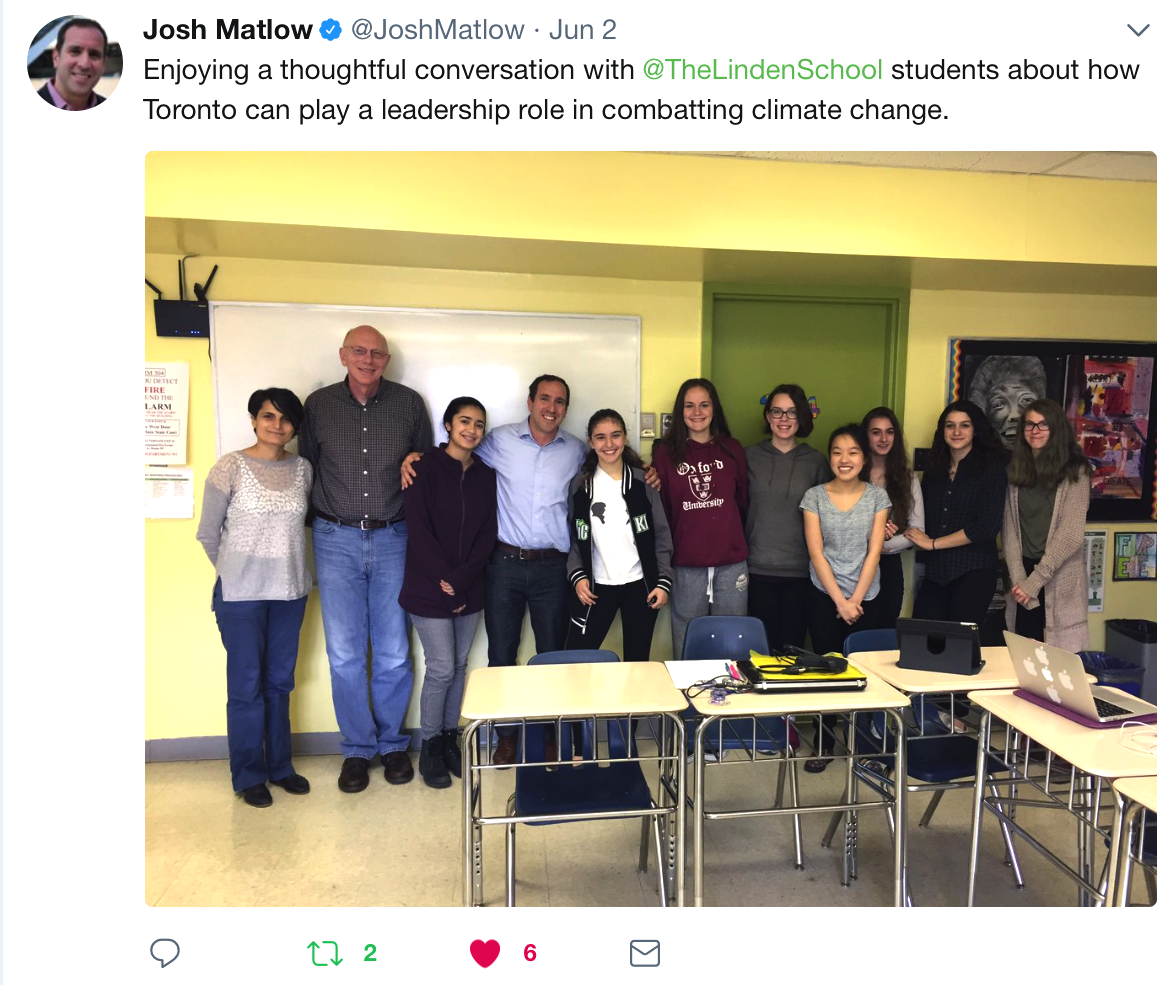 The Grade 9 Geography class recently completed a unit on Liveable and Sustainable Communities, which focused on learning how the infrastructure of a community can affect its livability and its environmental, economic, and social sustainability. Issues relating to land use, urban growth, and human systems were analyzed. Students were invited to develop strategies for making their community a more sustainable place to live. Part of the unit included reviewing a City of Toronto report that includes the City Parks and Environment Committee's proposed plans for Toronto: TransformTO: Climate Action for a Healthy, Equitable and Prosperous Toronto — Report 2: The Pathway to a Low Carbon Future. Students decided to write deputations for this report, which was discussed at City Hall on May 4, 2017.

The student deputations were also emailed to City Councillor Josh Matlow, who was invited to visit and inform us of next steps in the transformation initiative. Thanks to Matlow's visit the students continue to be inspired by the report. Our next year's Grade 10 Civics class will further work on this report by creating a more accessible version for youth. They will be collaborating with City officials on this exciting project—stay tuned for more news in the fall!

Student Deputations for Distribution to the Chair of Parks and Environment Committee and all Committee Members:

Our names are Edie and Lia, and we are Grade 9 students from The Linden School. We have read the TransformTO Report highlights and struggled a little with the language used. We ask that future reports are written in a more accessible version. This involves two components: easily understandable language and increased publicity and attainability of the report. For example, subway ads highlighting key points of the proposal would be an effective method of this.

We also wondered about the plan to develop electric charging infrastructure. Where will these go? We know there are some in parking lots in Toronto, but these are few and far between.

The report states that TransformTO proposes to increase eco-friendly workforce training. As people who will soon be entering college/university, learning about these best practices is important for us as well. Starting some of this training in higher education would be critical to our success in the workforce. This is an extremely report and should be adopted.

Thank you,
Lia and Edie

We are Halley and Mieko, Grade 9 students at The Linden School. In our geography class, we read over the 2050 Pathway to Low Carbon Toronto Report. We feel that this is a very important report that should be adopted and advertised more. Our school is rather progressive, and we often have discussions about global issues such as climate change and how we can make an impact as young individuals. One barrier we face is that many of the resources available surrounding these issues are made only for adults with a high level of education. As youth, we often find it hard to access and utilize these resources. We propose that a condensed, more accessible version of the reports be released, so that everybody, including youth, can understand the plans because they will affect us and our city. One way the reports can be made more easily understood is by using more visual elements and graphics, such as flowcharts.

We are Daragh and Ellen, students at The Linden School. We are fifteen years old, and we have just heard about TransformTO 2050. We are pleased to hear that a document like this will be adopted, but there are a few things that are concerning. We both live in the Beaches, and we have noticed that there is a large amount of flooding on the beach and we are very worried that this could turn into a bigger issue. In a recent CBC news article, we read that because of climate change the water levels in Lake Ontario are rising at a fast pace. If this problem is not addressed immediately, the Beaches could be completely flooded. When we were children, we would play on the beach all day in the summer, and we are worried that our children will not be able to have the same experience. We already see visible signs of climate change in our city. We highly encourage this report to be something the city will invest in and increase public awareness on this very important issue.