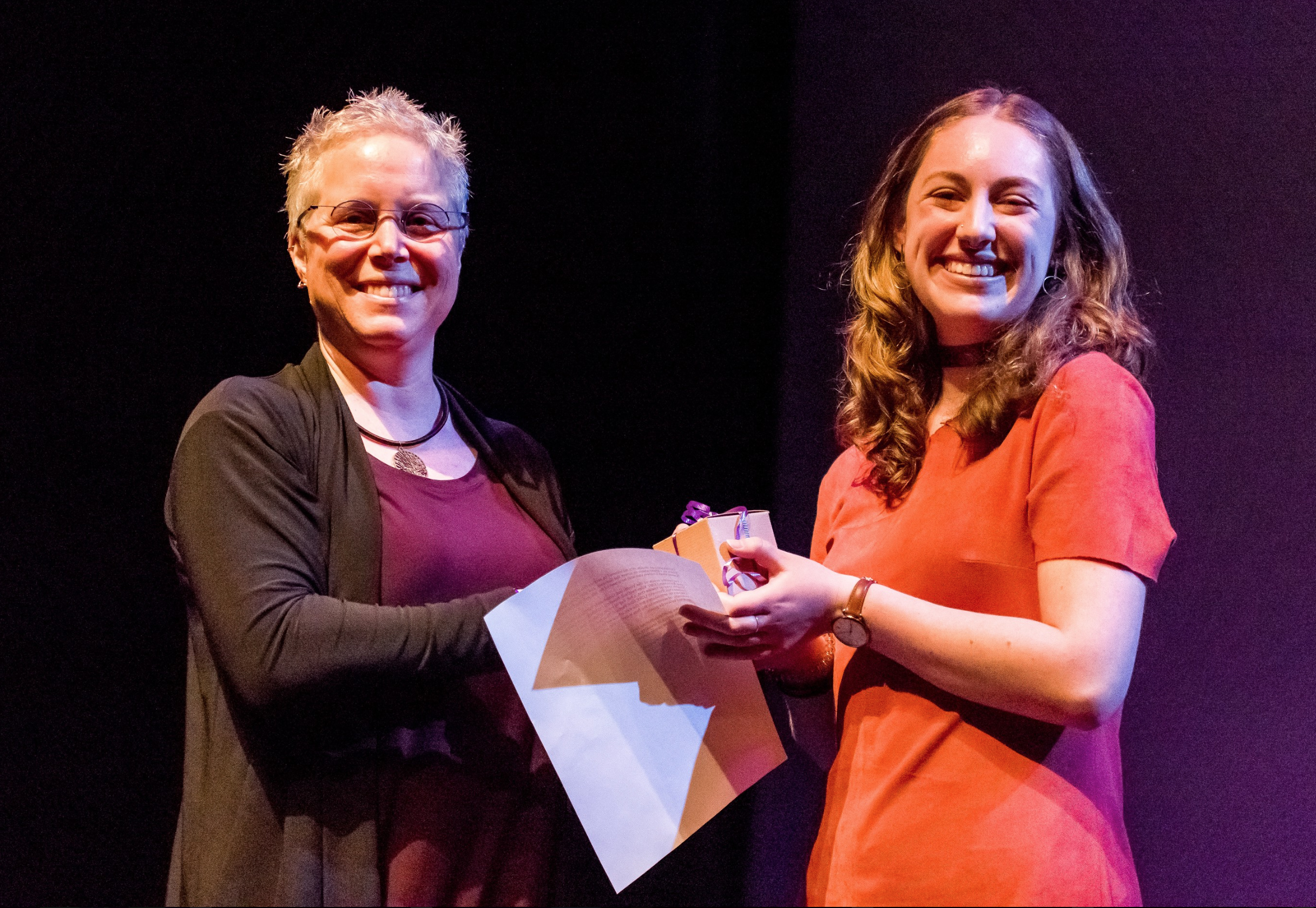 Senator Nancy Ruth is one of Linden’s founding supporters who has made an enormous difference in the lives of girls and women in Canada. This award is presented annually in her honour to a woman in the greater community who has demonstrated a real commitment to girls and women.

The Linden School is pleased to name Linden Alumna Nina Bakan as the 2018 recipient of the 13th Annual Nancy Ruth Award. Nina graduated from Linden in 2011 and presently serves as the Youth and Community Outreach Coordinator at Inside Out. Nina invited Linden students to attend this year's Inside Out Youth Day event, and also served as a speaker for our Career Day. Her commitment to our youth is inspiring and showcases Linden values and mission to work within an anti-oppression framework to promote and strengthen girls' voices.

Thank you so much, it’s an honour to receive this award. It’s been seven years since I’ve been to Celebration to Greet the Summer, and after all this time it’s comforting to know that Linden can still be a part of my life, and that I can be a part of Linden.

I currently work as the Youth and Community Outreach Coordinator at Inside Out, the Toronto LGBT Film Festival. Recently, I reached out to Linden about attending Youth Day at Inside Out, a full day of youth programming that takes place at the Inside Out Toronto LGBT Film Festival. This year we were so fortunate to have Linden in attendance for the day, where we hosted a morning panel comprised entirely of women in the film industry, and a short film screening that was specially geared towards youth.

One of the problems that we face in being an LGBT film festival is that content that deals with topics of sexuality and gender are, more often than not, deemed inappropriate for young audiences by the National Film Board’s rating system. To counter this barrier to youth accessibility, at Inside Out my main responsibility is to help develop programs for youth that touch on these pressing topics, because we believe that young people need opportunities to discuss and explore issues of sexual and gender identity.

I never expected to do this type of work, but rather fell into it during university. While doing my BA at the University of Toronto I worked at the Art Museum, which is the art gallery at the downtown campus. I started off as a gallery attendant and then became a curatorial assistant. In December of 2016, we took on the huge task of presenting a blockbuster exhibition, Kent Monkman’s Shame and Prejudice: A Story of Resilience.

The level of attention garnered from this exhibition wasn’t like anything we had experienced before, which sparked the idea that we needed educational programming to accompany the exhibition. So, kind of out of nowhere, the responsibility fell to me to design an educational curriculum for Shame and Prejudice and to lead all its educational programs.

As someone with no formal teaching background, this was very scary, especially when dealing with the exhibition’s content, which focused on Indigenous resilience in response to Canada’s history of colonialism. However, through working with Indigenous community organizations, such as Native Child and Family Services and Native Men’s Residence, to develop an open dialogue and teaching strategy, the program was a success and led to my being the educational programmer for all subsequent exhibitions during my time at the Art Museum. I’m not sure where my work will take me, but I hope to continue working to make the arts accessible and to encourage people to learn and think critically through art.

Thanks again for having me here today, and for recognizing what I do!