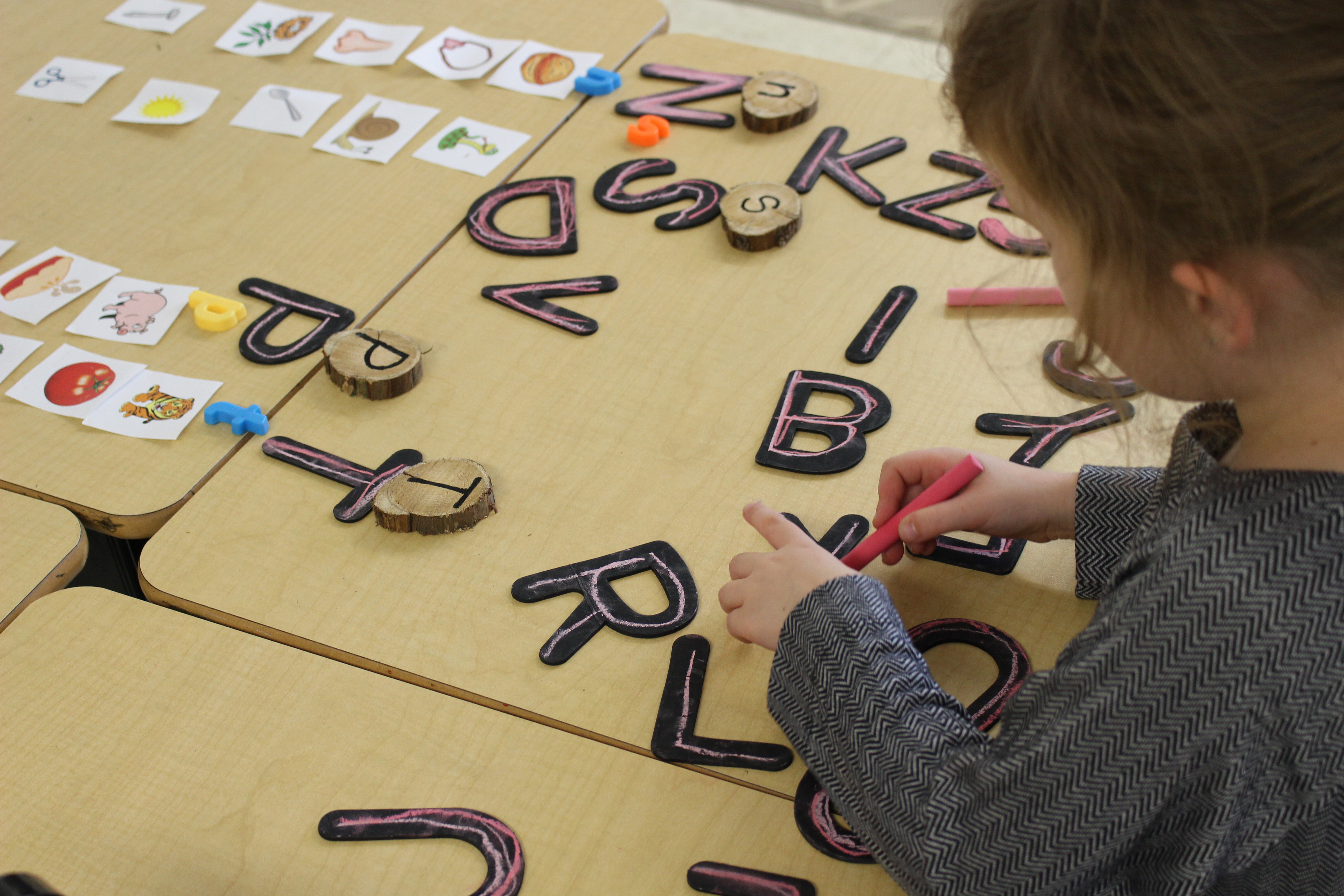 After a week spent exploring the city during Week Without Walls, we were all happy to be back in our classroom and back in our normal routines. We introduced our "centre passports" this week, in which there are charts with a box for each centre. Each week the girls receive a new chart, and get to add a sticker to each centre section when they spend time in that centre. The goal for each week is to visit as many centres as possible (and to experience learning in different areas of the classroom). The girls were excited to not only spend time at the different centres, but also to be able to start taking ownership over their learning. By Thursday they knew the routine, and were eager to receive their passports in the morning to see where they wanted to spend their time.

Here's a snapshot of our week together: 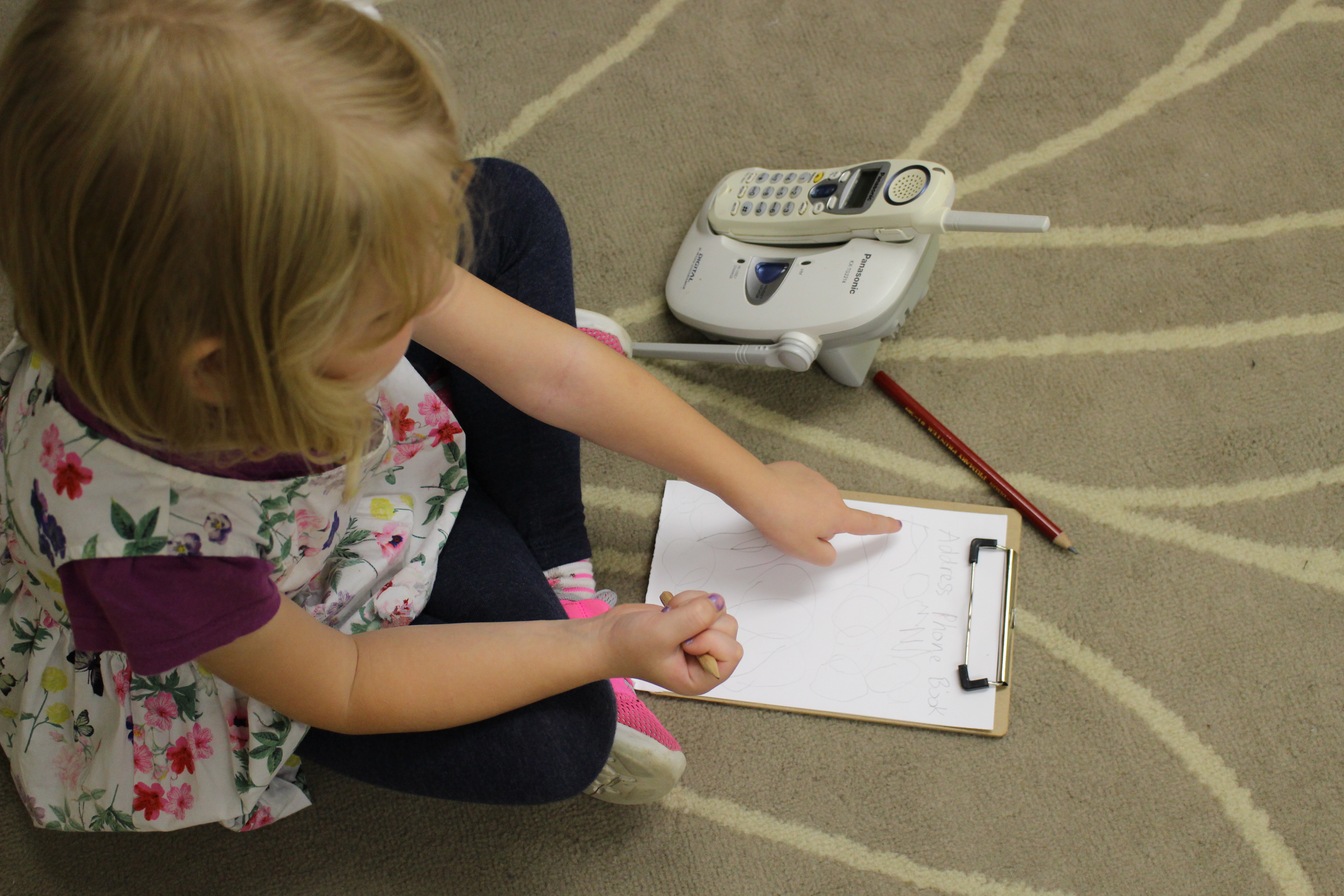 G is spending time on the phone in the Drama Centre. I invited her to think about including a clipboard, paper, and a pencil into her play, and explained that many people who use the phone often take messages and write them down so they don’t forget. People also keep track of phone numbers on the paper. G proceeded to write her message “from the police”, as well as the number she was calling. 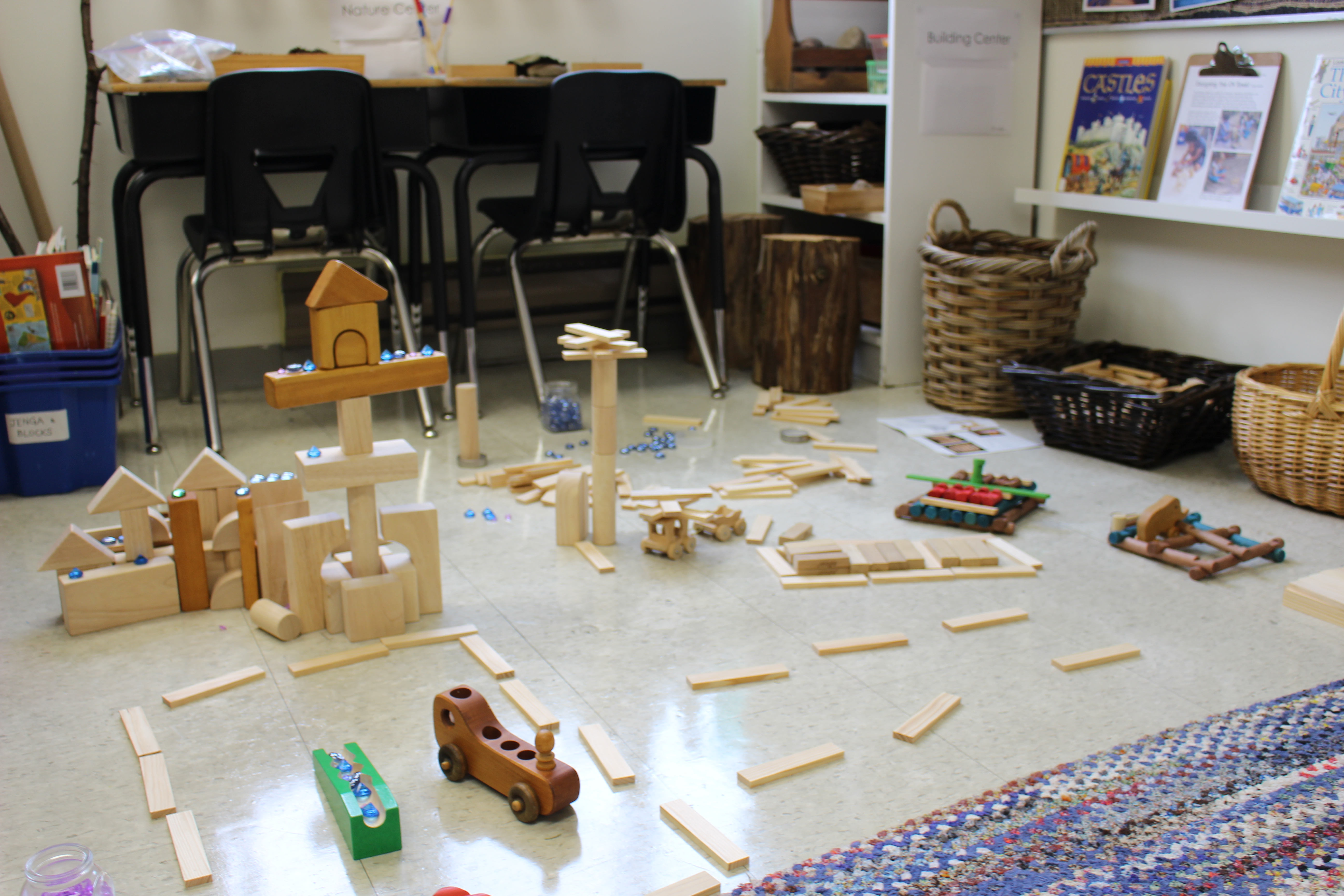 Three girls spent the morning designing an expansive city in Building. Their city included a school, a playground, stations, cars, party rooms, the CN tower, roads “where cars can come through and out.” 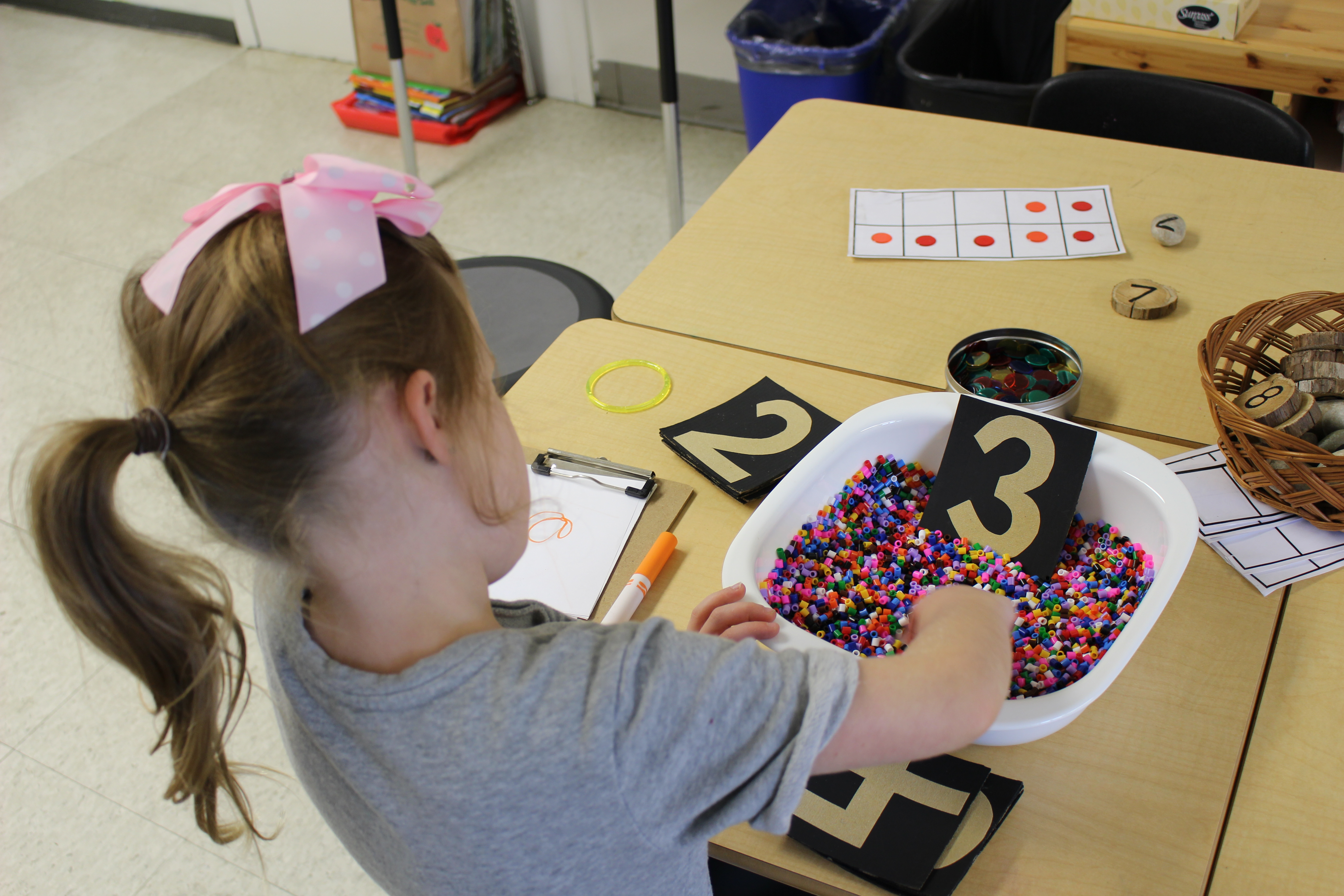 G was immediately attracted to the colourful beads that were presented at the Math Centre. She was using her touch sense to trace the sandpaper number, then to draw the number in the beads, and then finally to use the marker to write the number on the paper beside her. Experiencing numbers (and letters) in a tactile way allows for a deeper memory of the shapes of numbers. 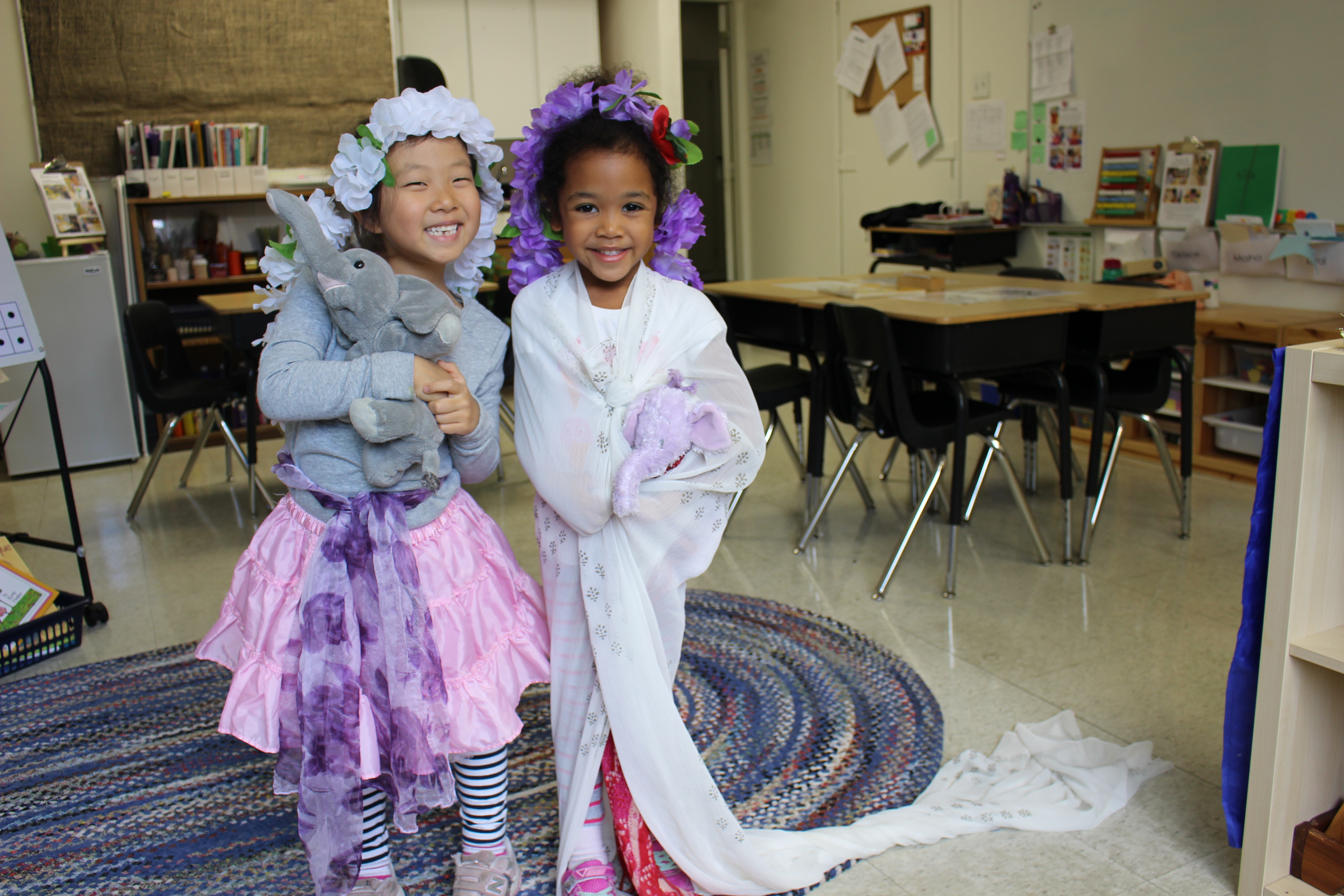 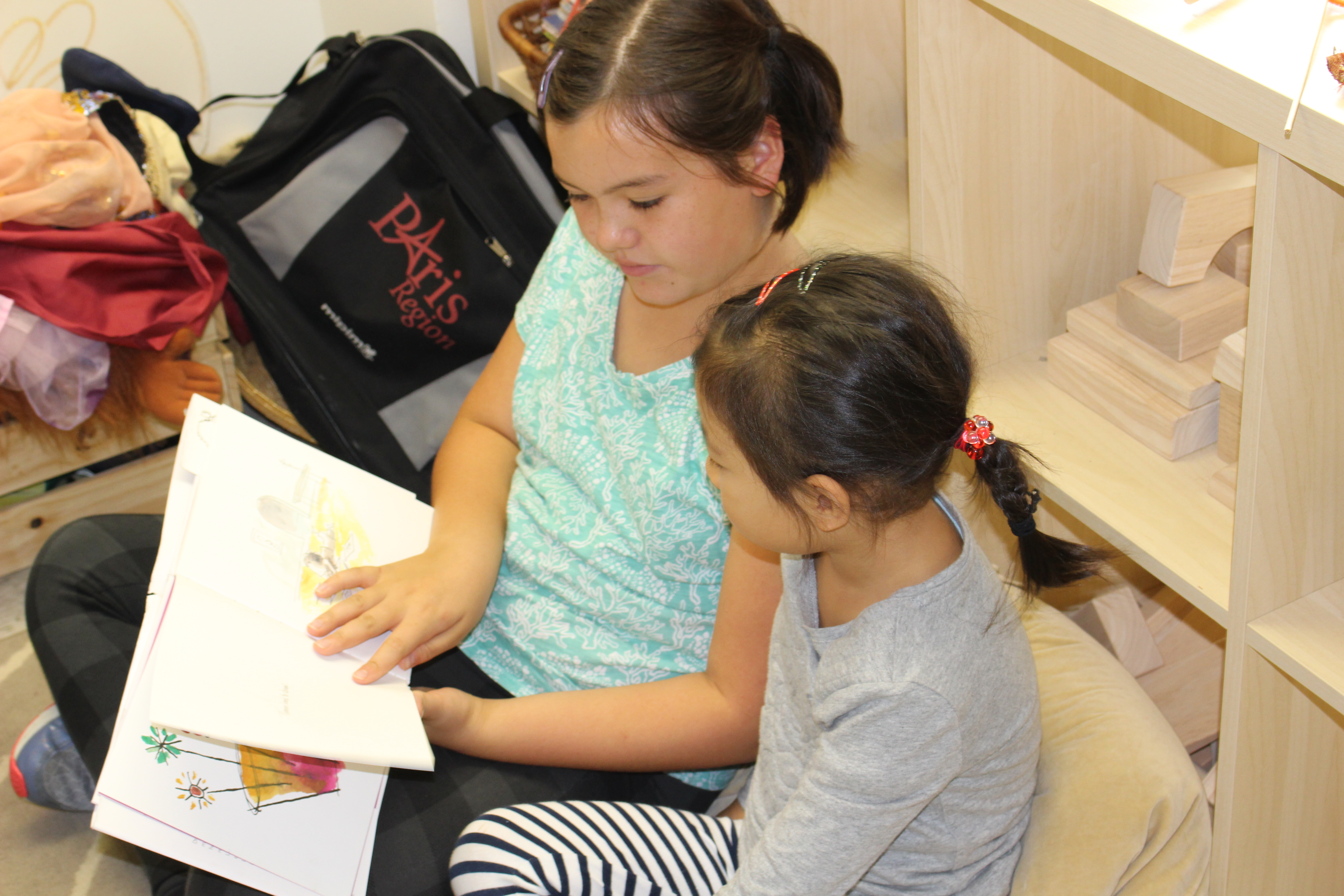 We had our first session of reading buddies today. Here, a grade 6 girl, K, reads the book Ish with M. Both girls loved the one-on-one time they got to spend with each other, away from the excitement of recess on the roof. 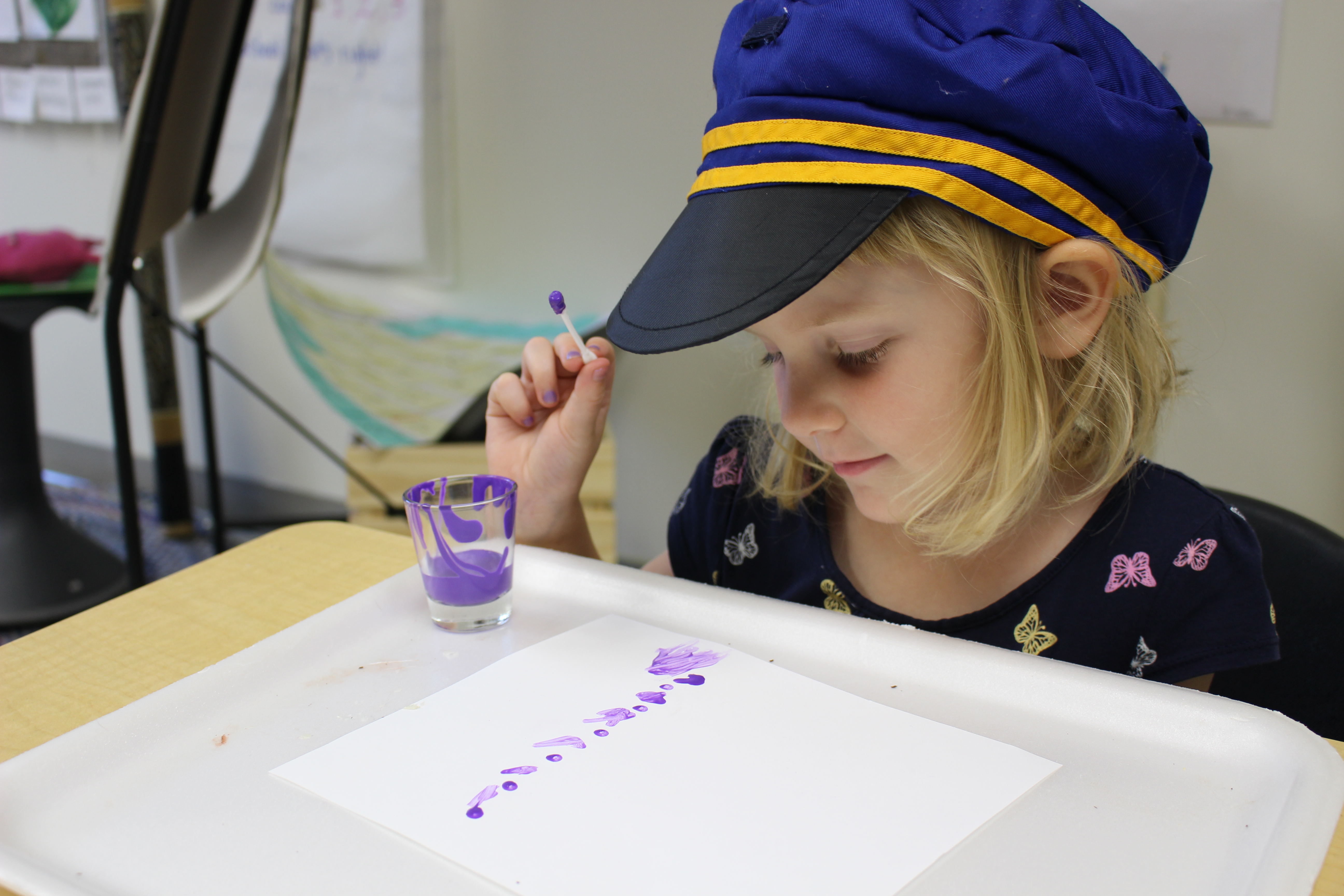 G uses a q-tip to explore different painting techniques. Here, she tells me, “this is the rock path leading to the house”. Using a small painting tool allows the girls to take care in what they are painting, and add details if interested. 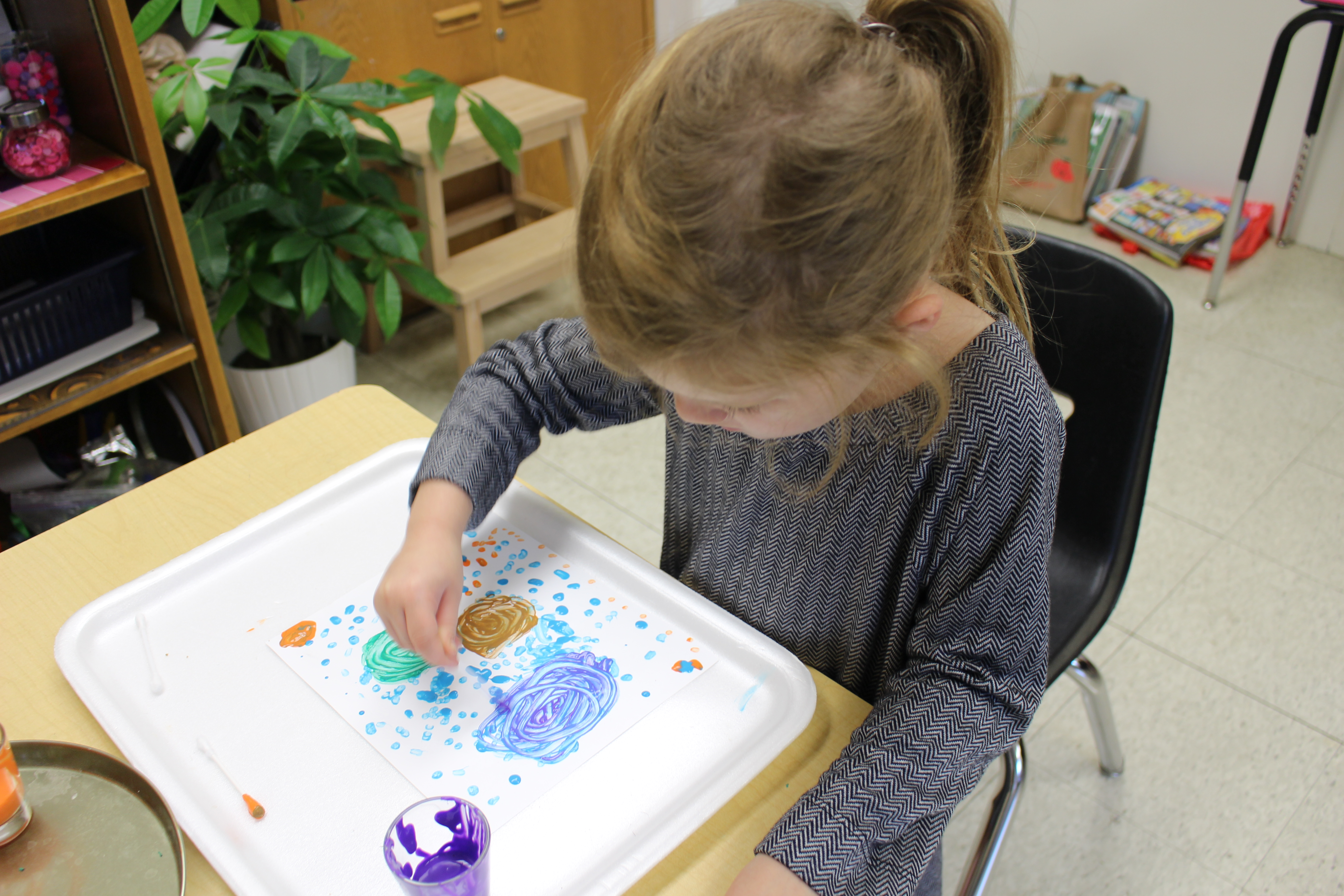 G is also painting with a q-tip, and after doing a base of many dots, begins exploring how she is able to mix colours together. She is curious of the result of adding different colours to the blue, and seeing what happens. 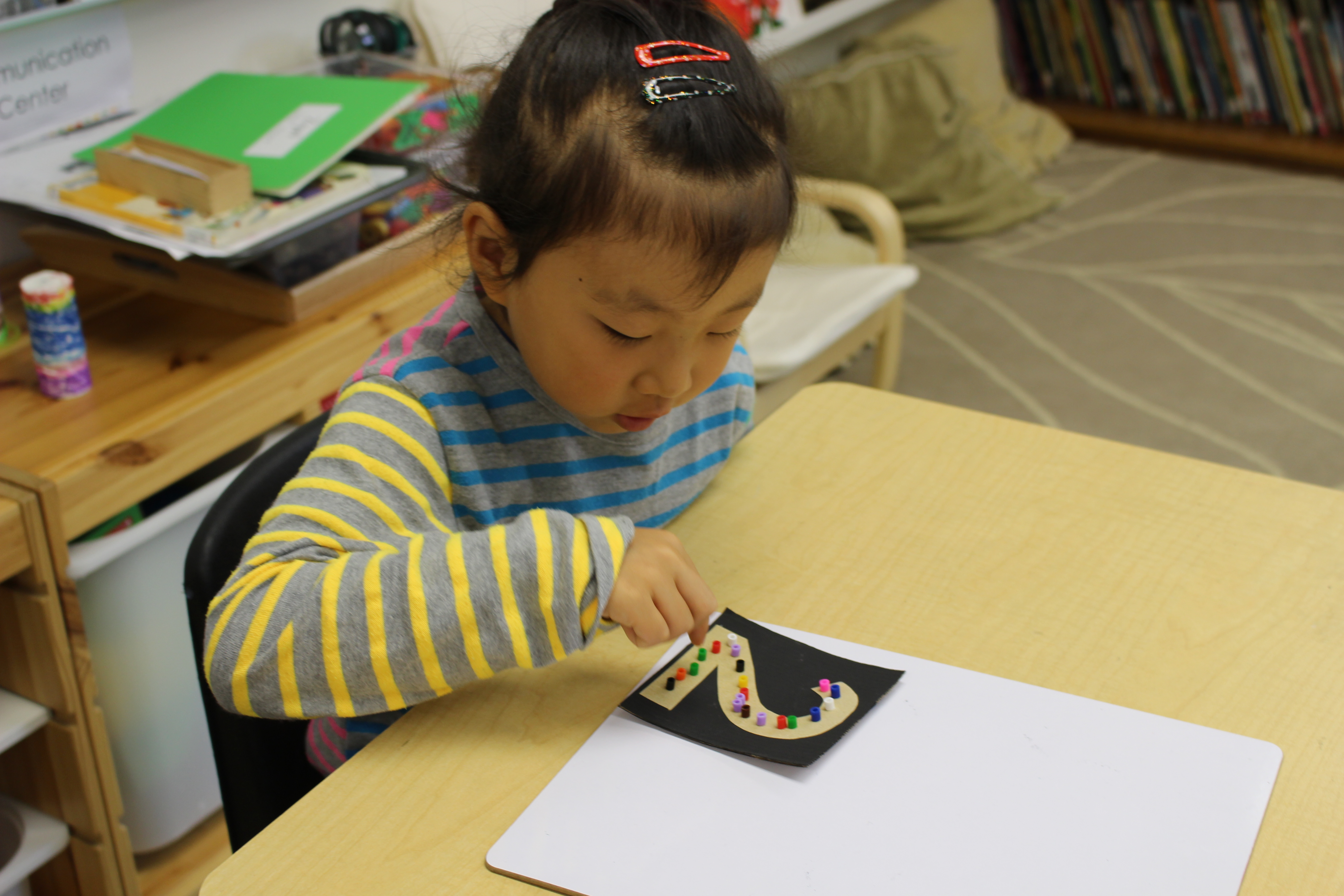 M works with the colourful beads and sandpaper numbers, but instead of simply tracing them with her finger, she carefully placed beads to make the shape of the letter. After, she worked to count how many beads she had used in total (20 for #2!). 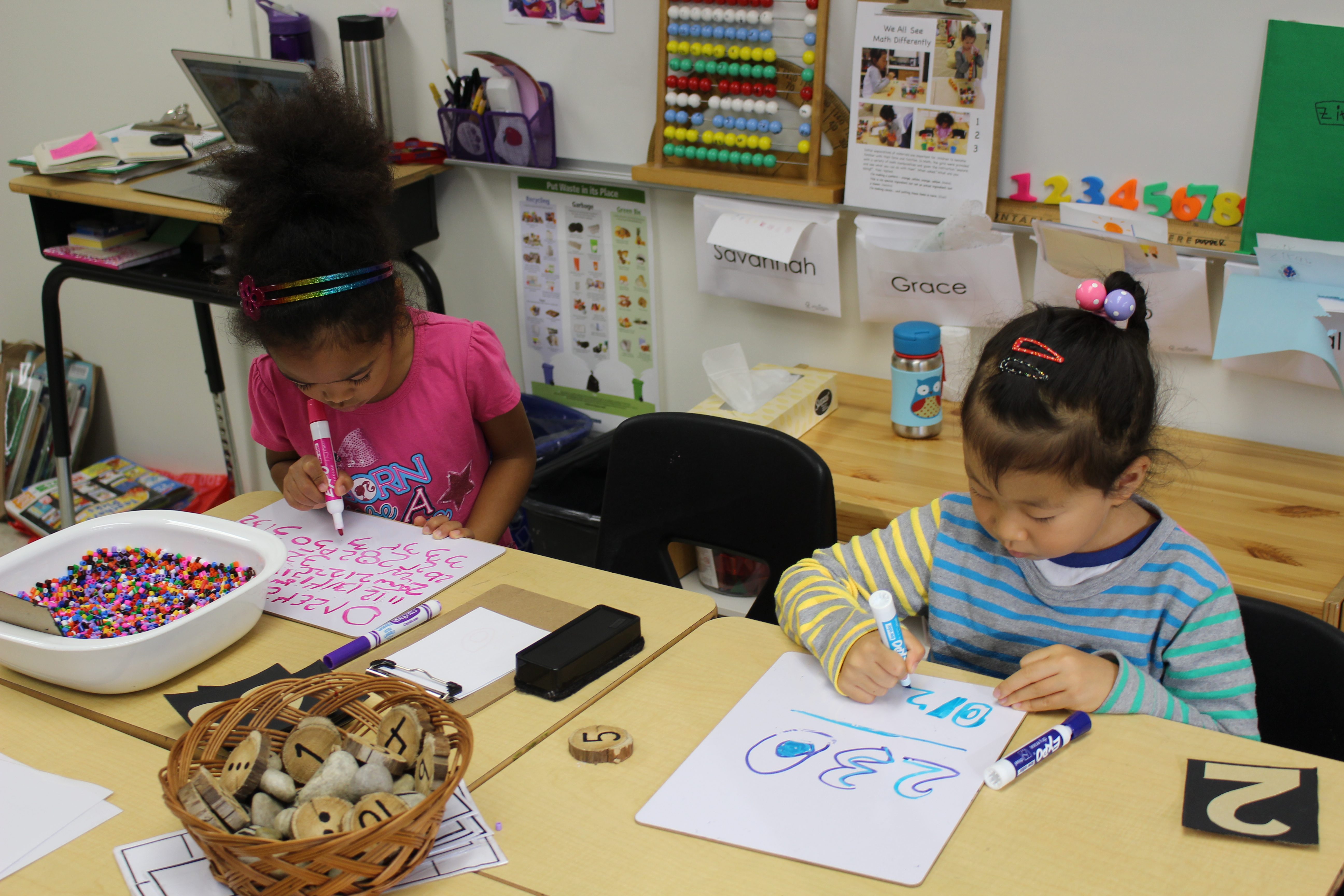 M and Z are both hard at work writing numbers on their practice boards. Z was using the abacus behind her to make sure she was ordering her numbers correctly, as well as a prompt if she forgot which came next. M was trying to make “bubble numbers”, and then proceeded to create three digit numbers which she enjoyed hearing the names of “two-hundred and thirty, WOW!”. 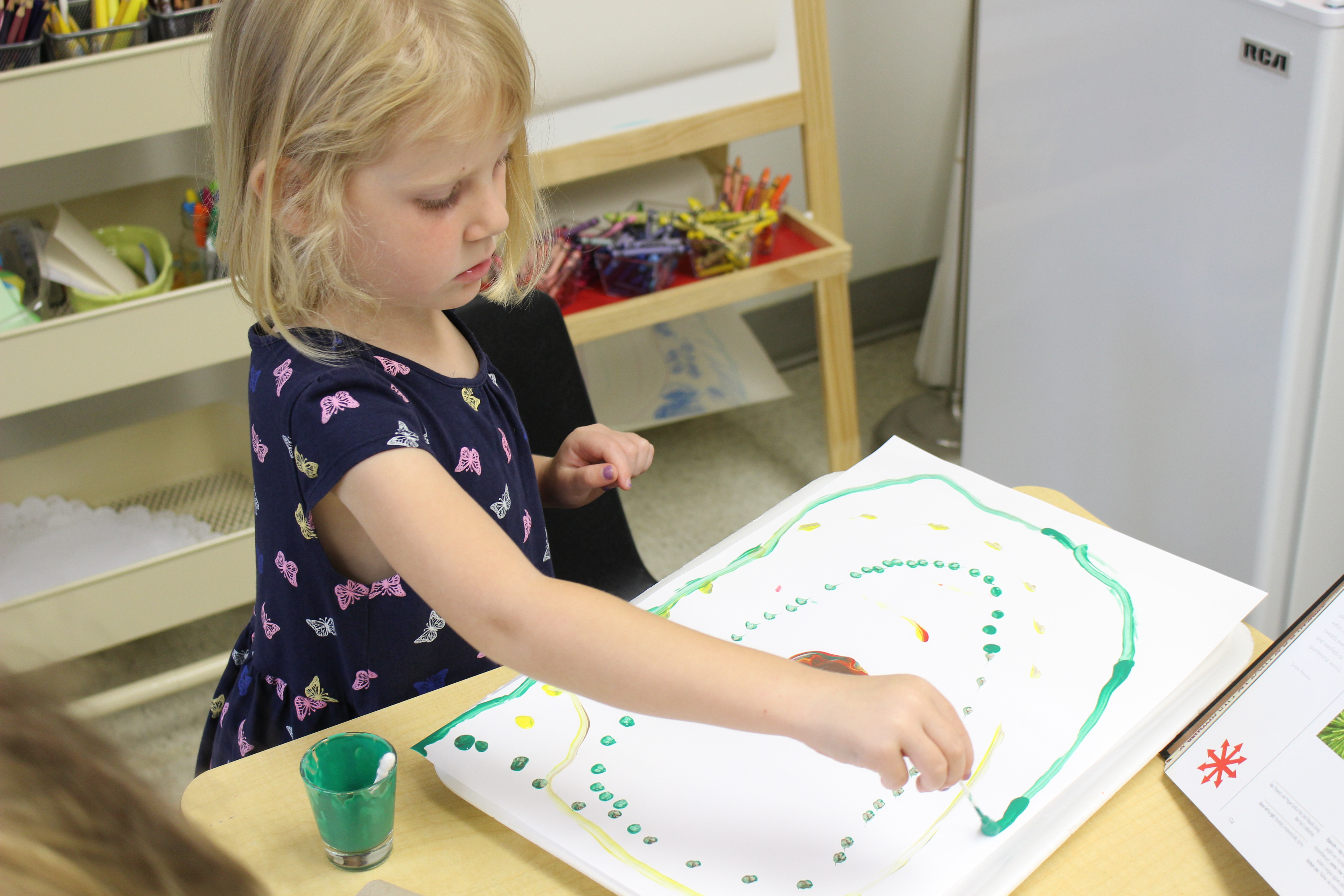 G is painting a larger picture with the q-tips once she has tried different painting (and colour mixing) techniques. You can see the concentration on her face, and the time she takes to fill up the entire paper with colour. 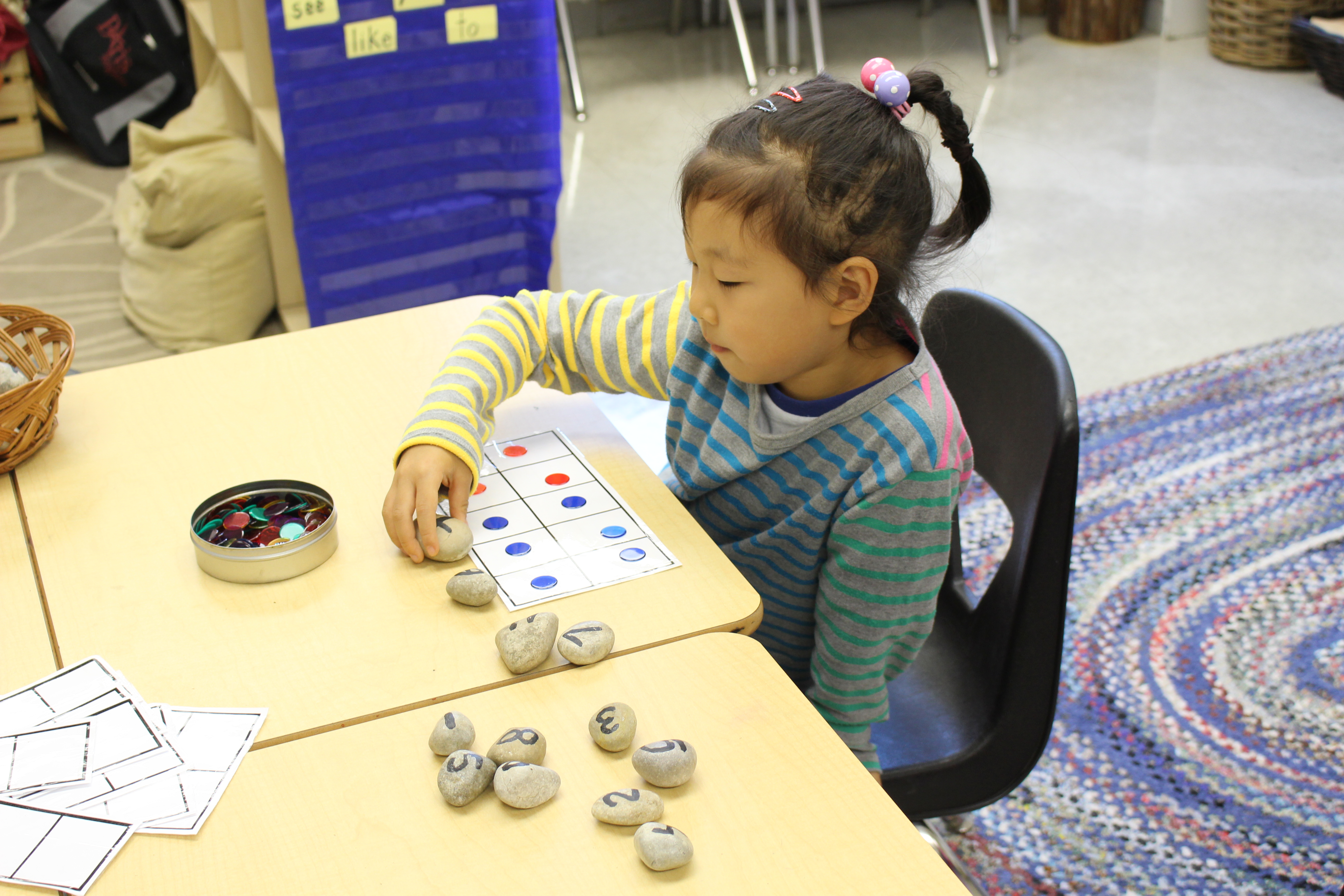 M works with counters, a 10-frame, and number rocks at the Math Centre. She was introduced to simple addition using different colours of counters, the “+” and “=” symbols, and the language of a math sentence or equation. She did well changing up the counters on her board, and then adjusting the math sentence to reflect the amounts she used. 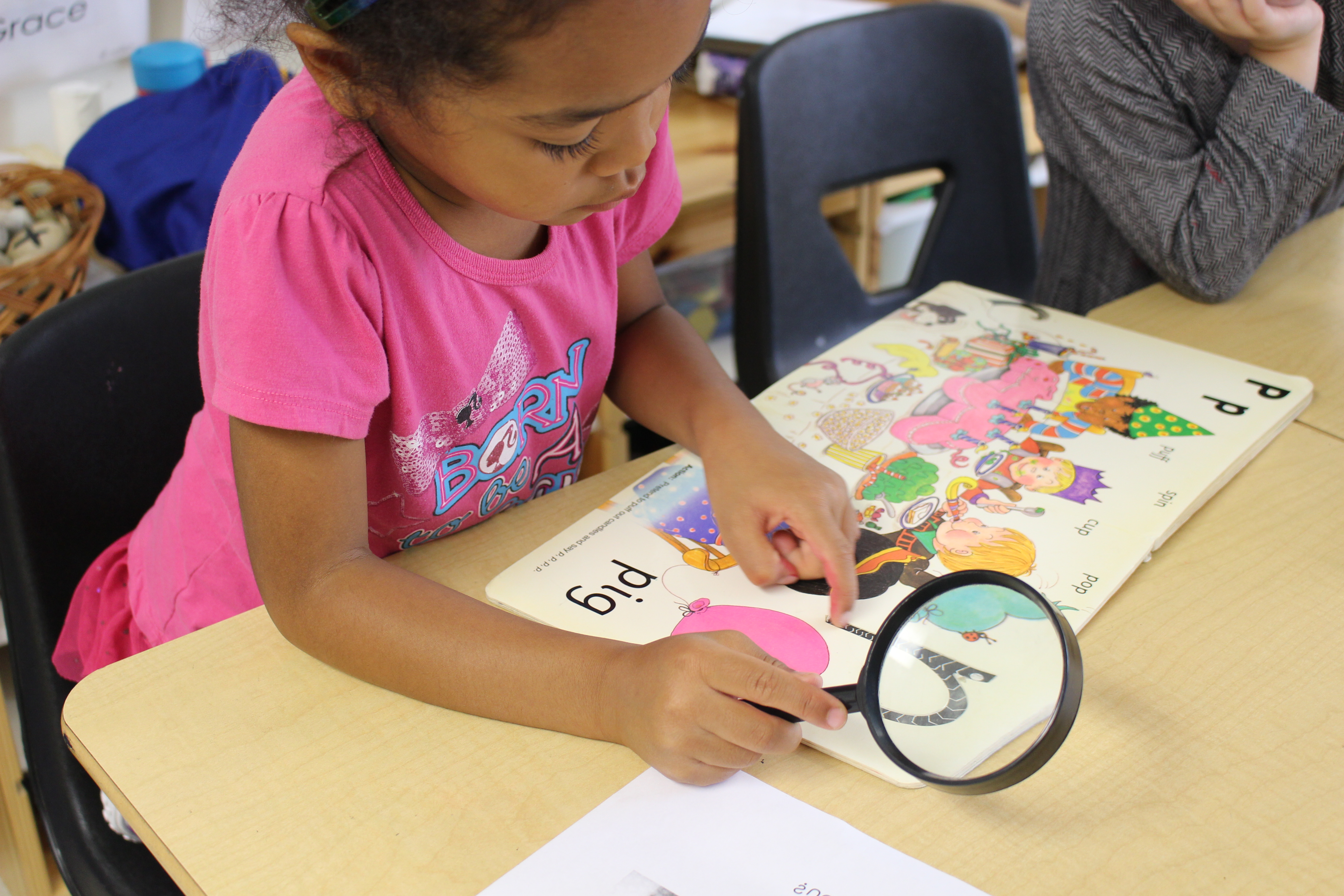 Z is enjoying practicing her letter sounds with our Jolly Phonics book. This week we reviewed the sounds for the letters “S A T I P N”, and added actions for each. Here, she is tracing the letter n while saying nnnnnnnn to herself. Actions for sounds:

S – slither hand like a snake, while saying “sssssss”

A – brush arms above elbows like you’re brushing ants off of you, while saying “a-a-a-a”

T – turn head side to side like you’re watching a tennis match, while saying “t-t-t-t”

P – hold up one finger in front of mouth like blowing out a candle, while saying “p”

N – hold out arms like an airplane, while saying “nnnnnnn” 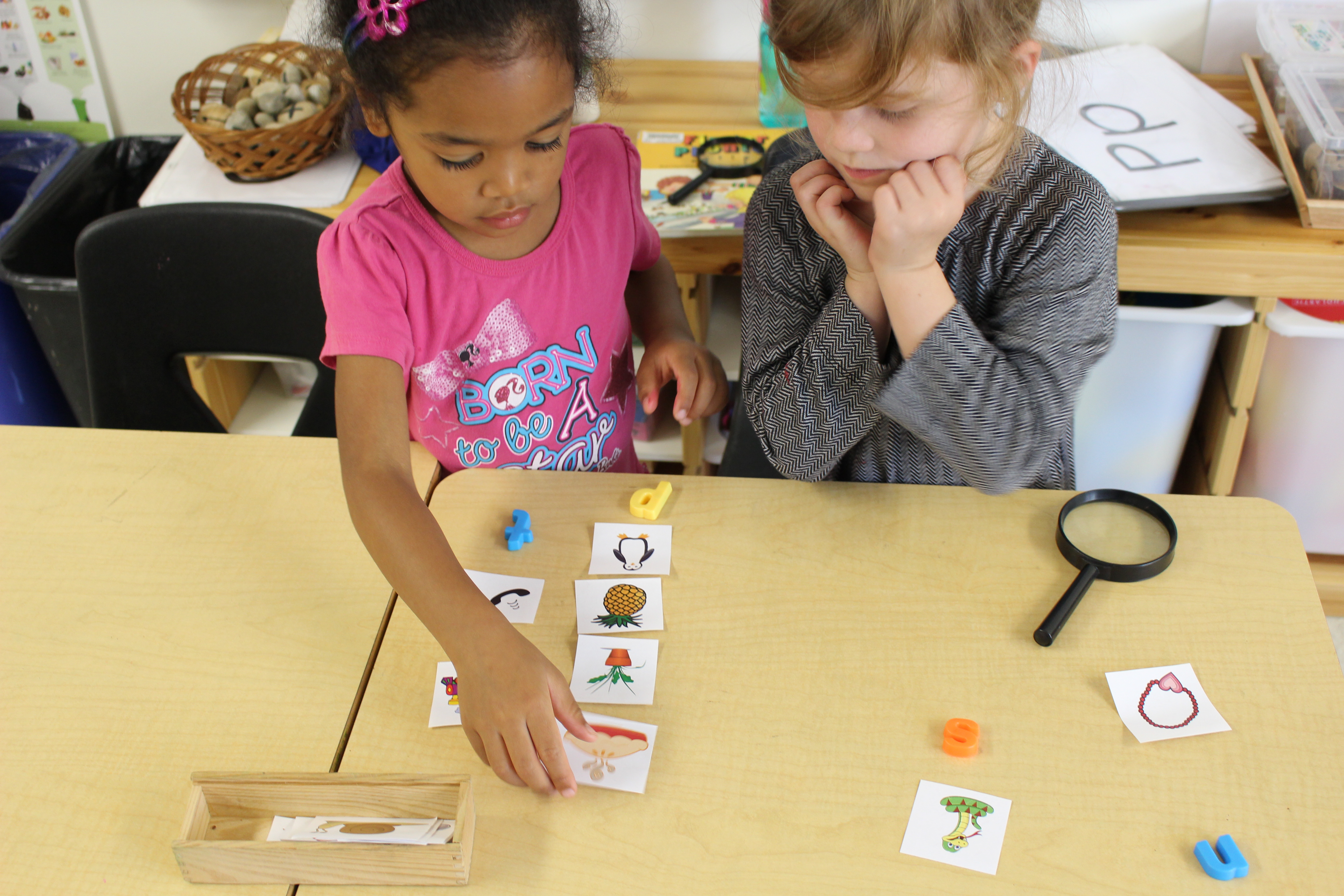 Z and G are sorting images based on their initial sounds, either “s”, “n”, “t”, or “p”. They work together to say the names of the words and then to put them in appropriate columns. 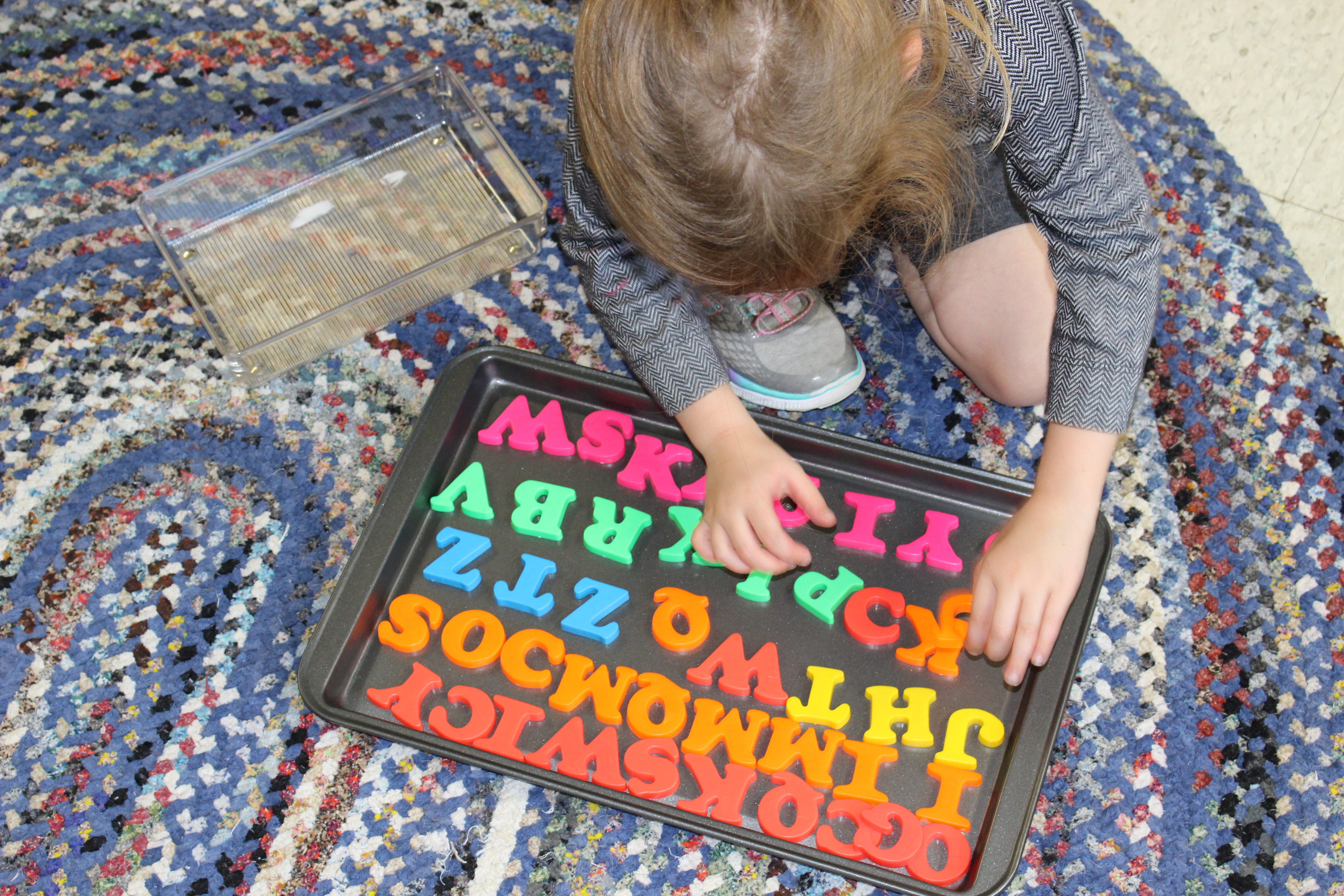 G sorts the magnetic upper case letters into their colours – a creative way to experience letters. 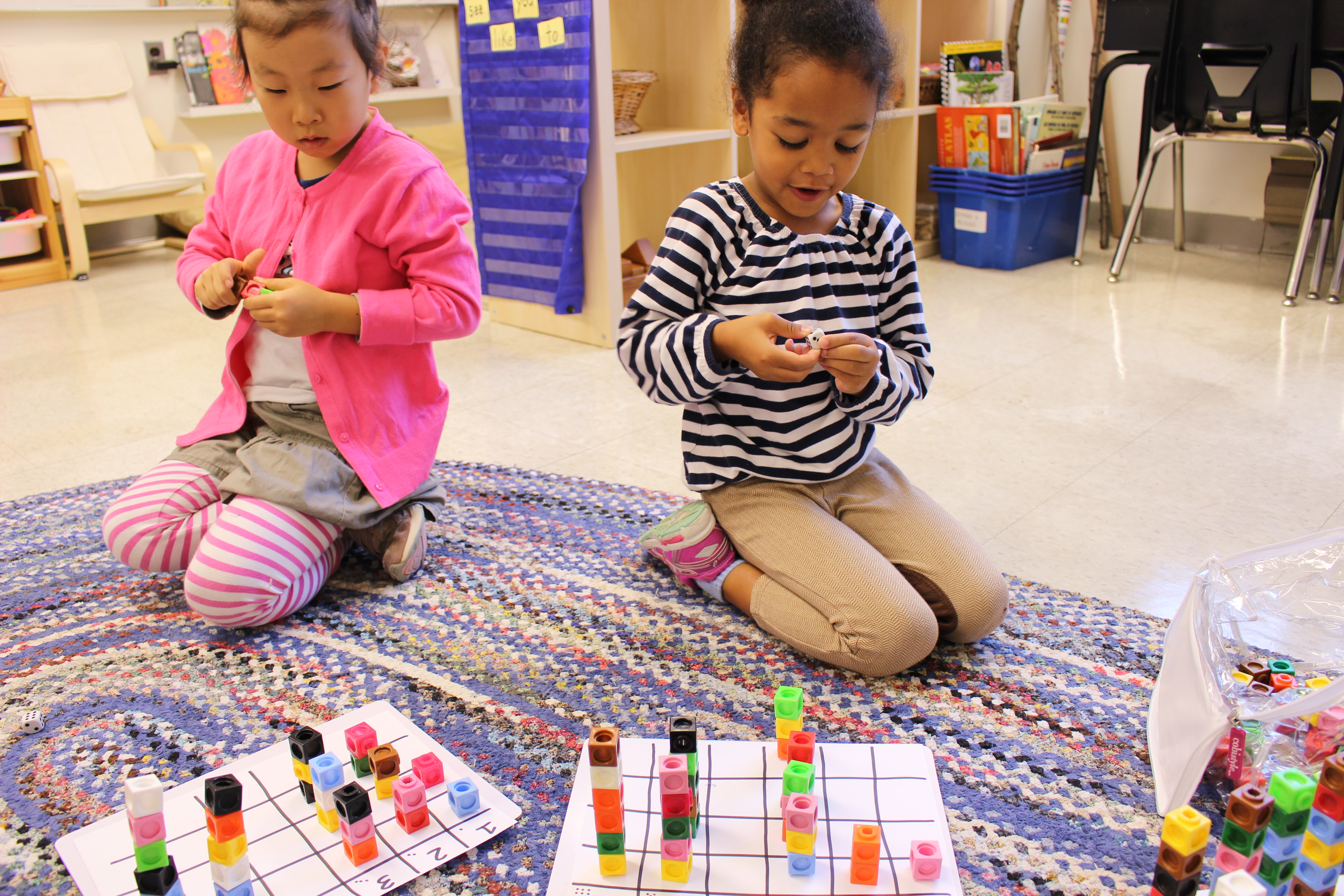 Z is playing “Dice and Towers” with the class. She has rolled a 3 to complete her “3 column” and is thrilled. In the game you roll a die, have to gather that number of cubes, build a tower with them, and then stand them in the appropriate column. The girls are using a lot of number sense here. 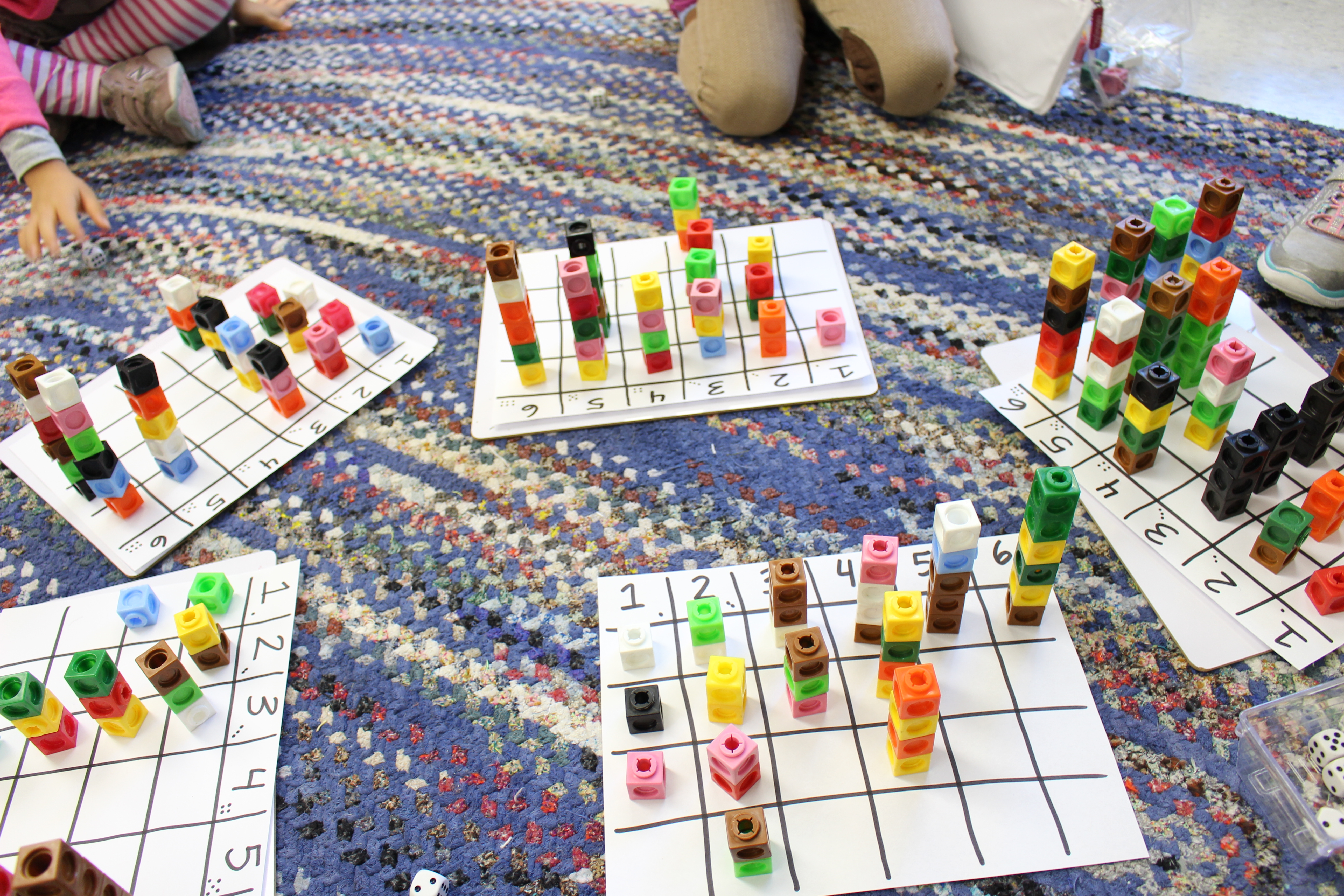 Here are our almost-completed gameboards during “Dice and Towers”. 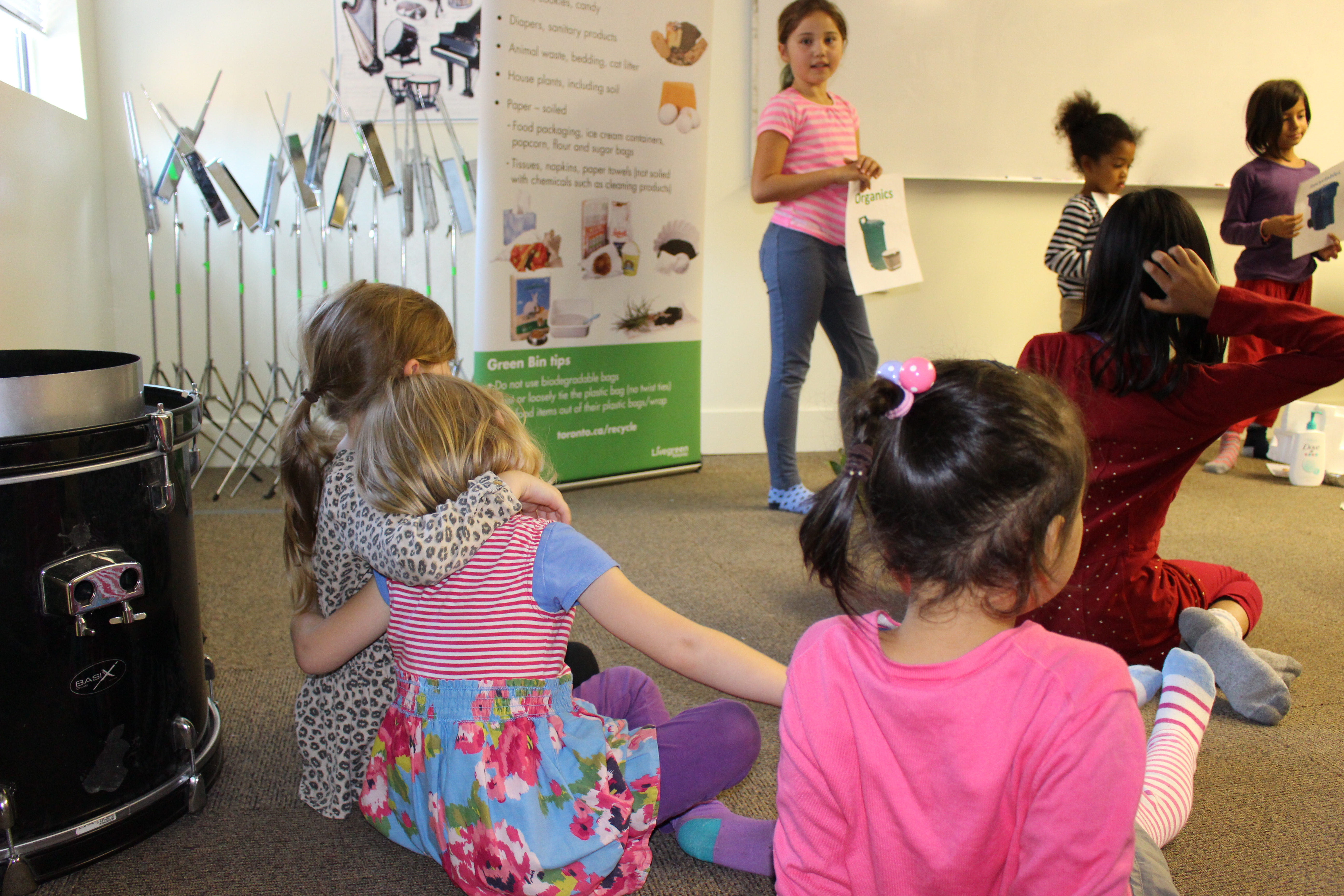 We are participating in a presentation about Waste Management put on by visitors from the City of Toronto. In this activity we are sorting different types of waste into “green/organic”, “blue/recycle”, and “black/grey/garbage”. 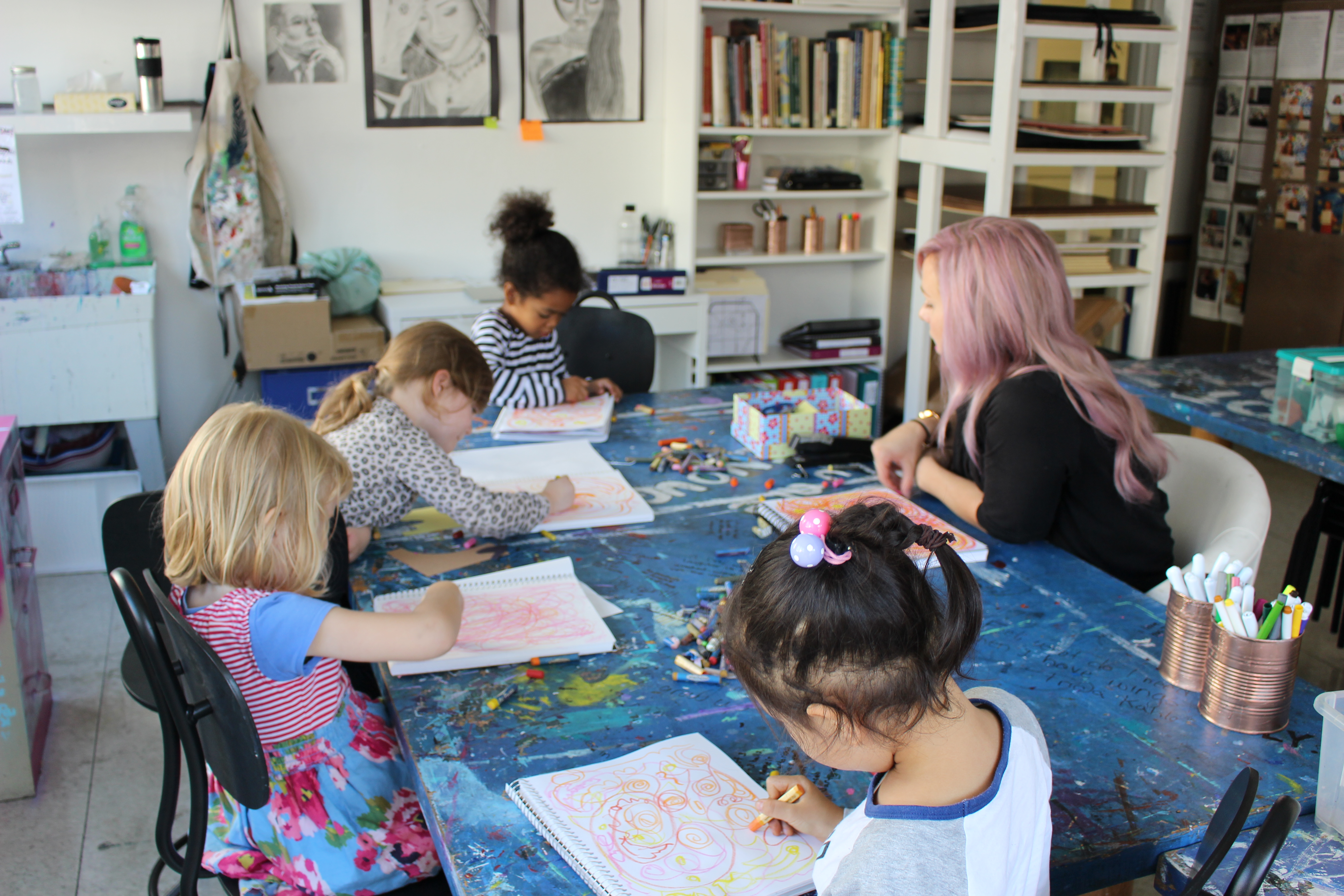 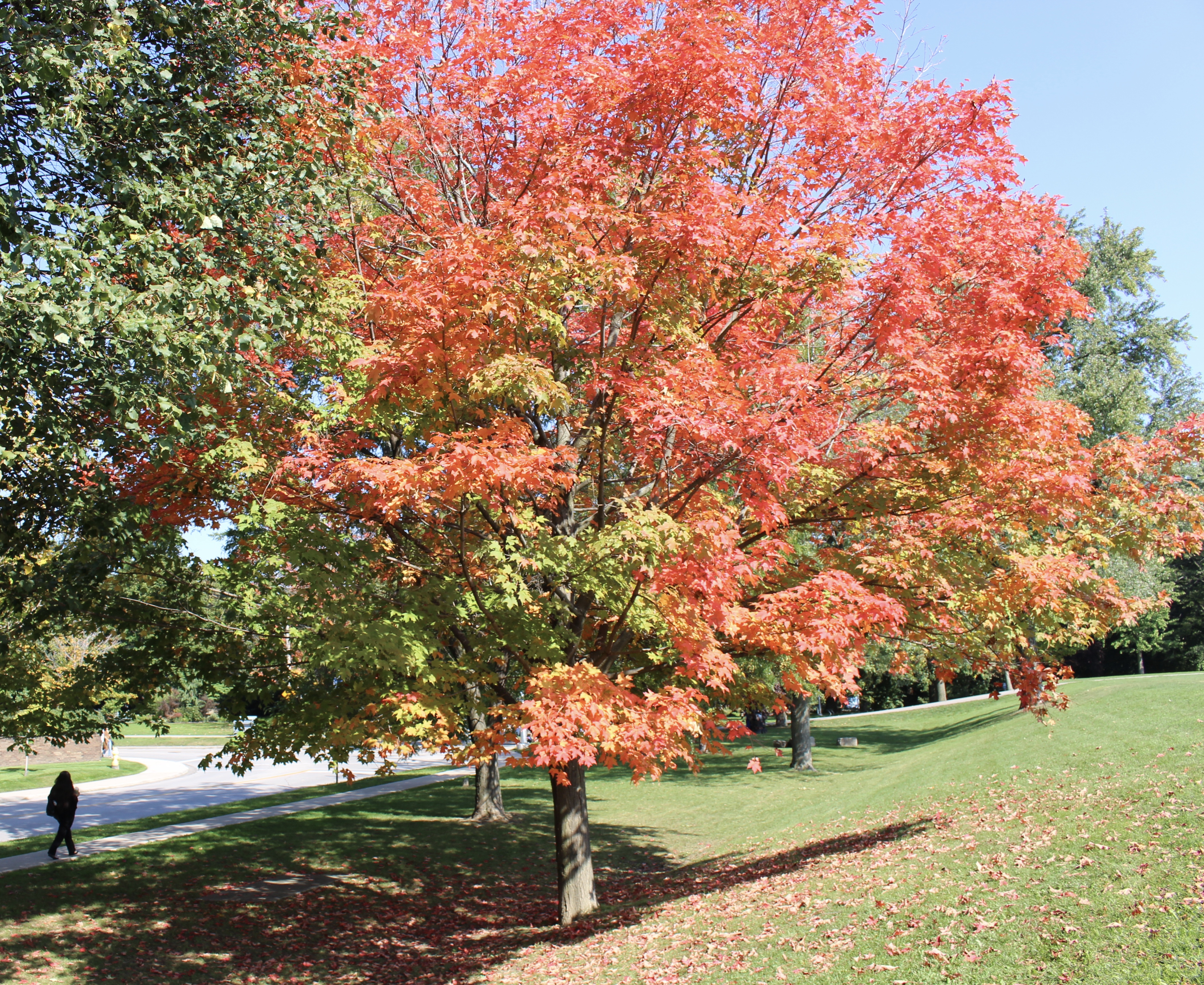 A beautiful tree that is already changing colour at the Rosehill Reservoir. 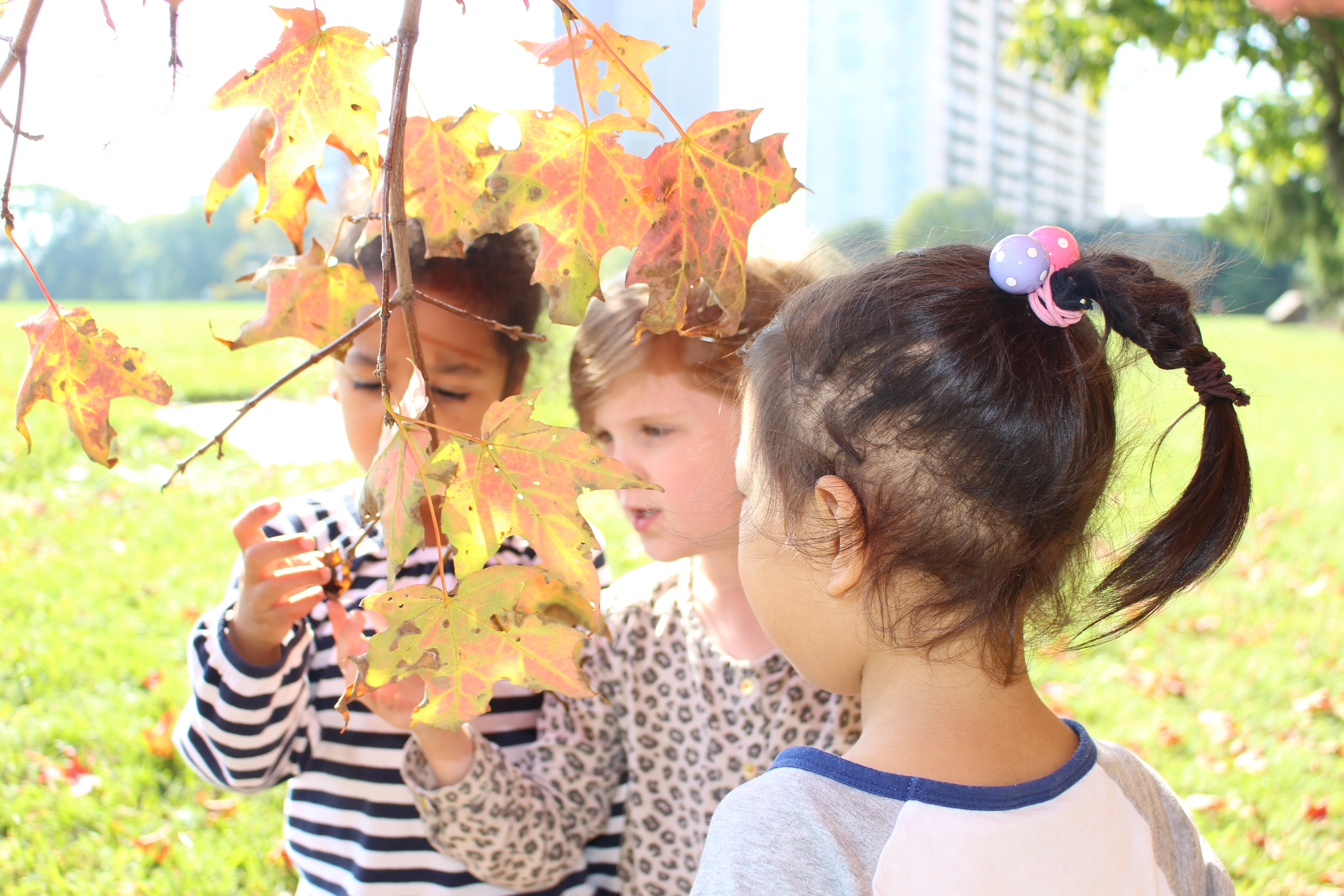 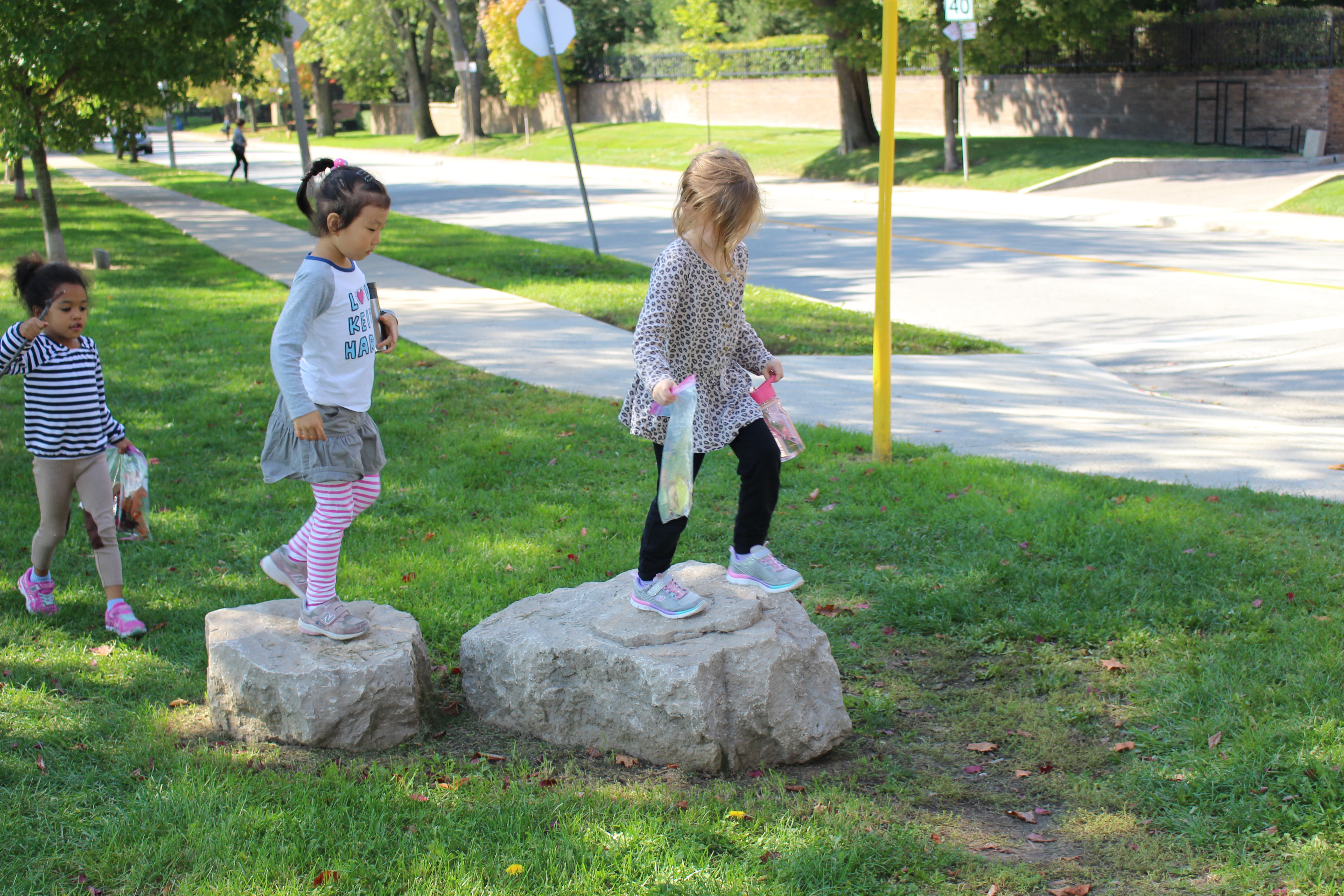 G, M, and Z balance as they cross the rocks – these girls enjoy climbing up and down anything! 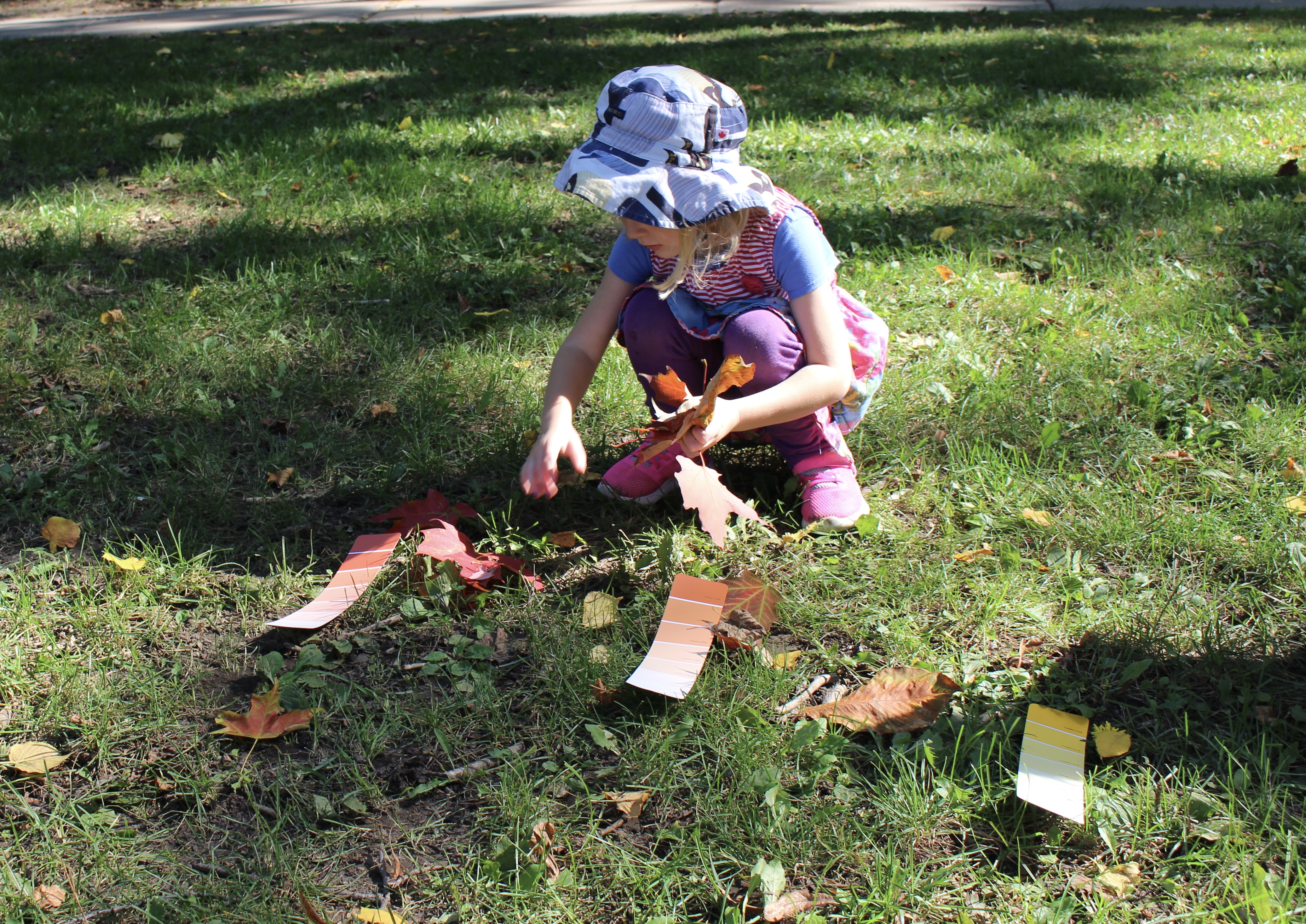 G helps sort leaves and sticks that the girls collected on our walk to the park into different colour groups. It helps us see the rainbow of fall colours around us. 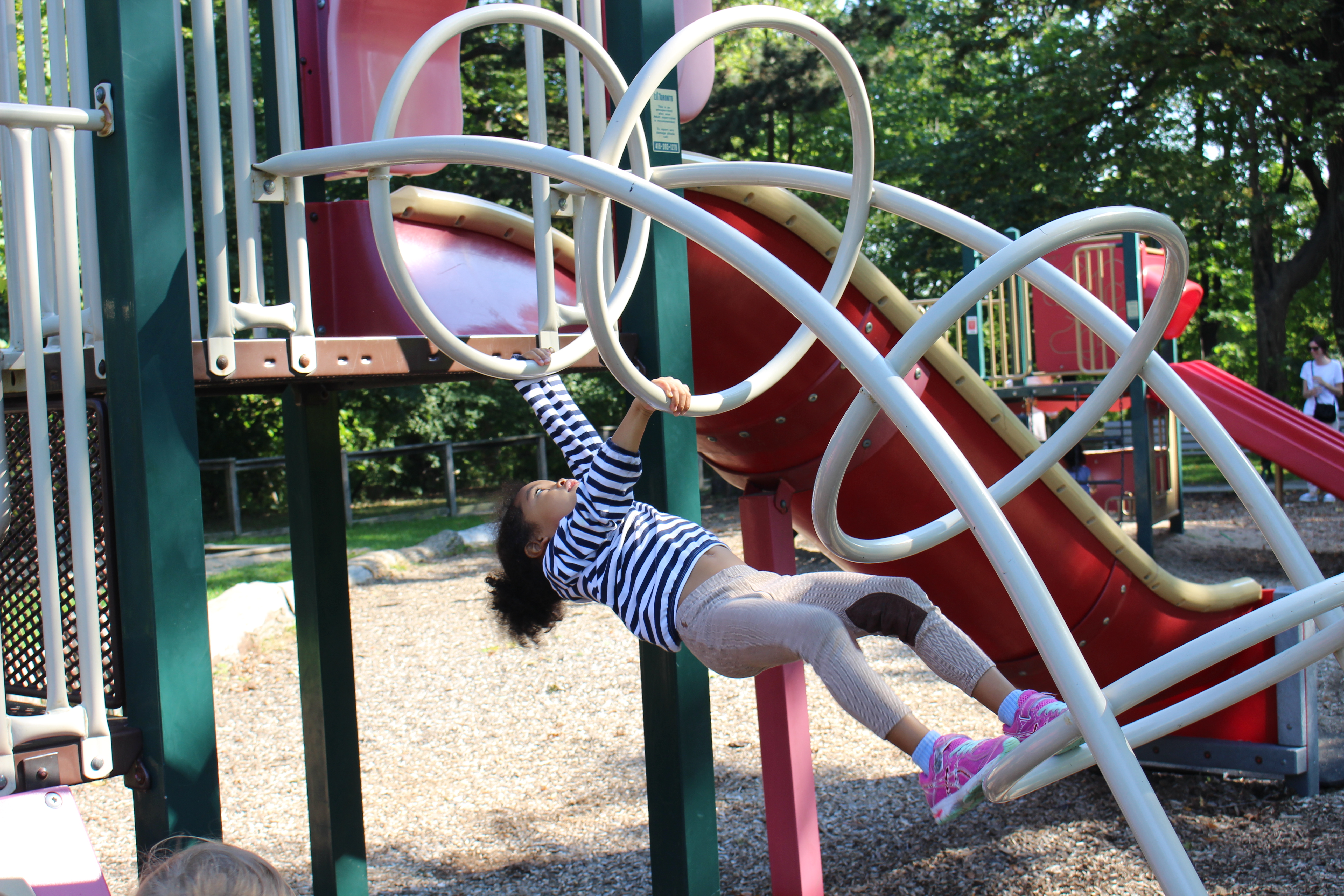 Z uses her strength and confidence to take the risk and reach for the final bar on the climber. She is so proud to have successfully gotten there. 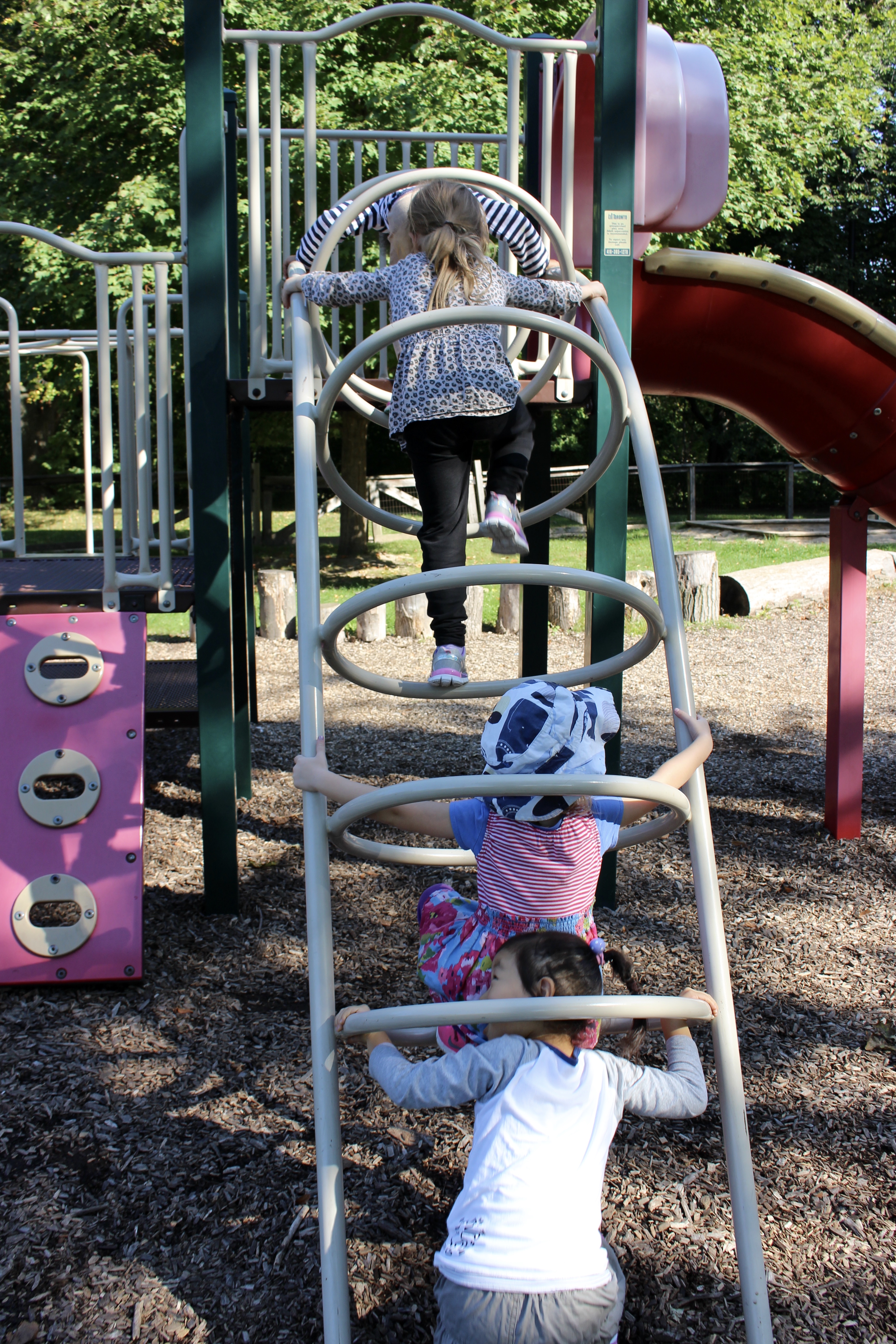 A tunnel of adventurous girls at the park. 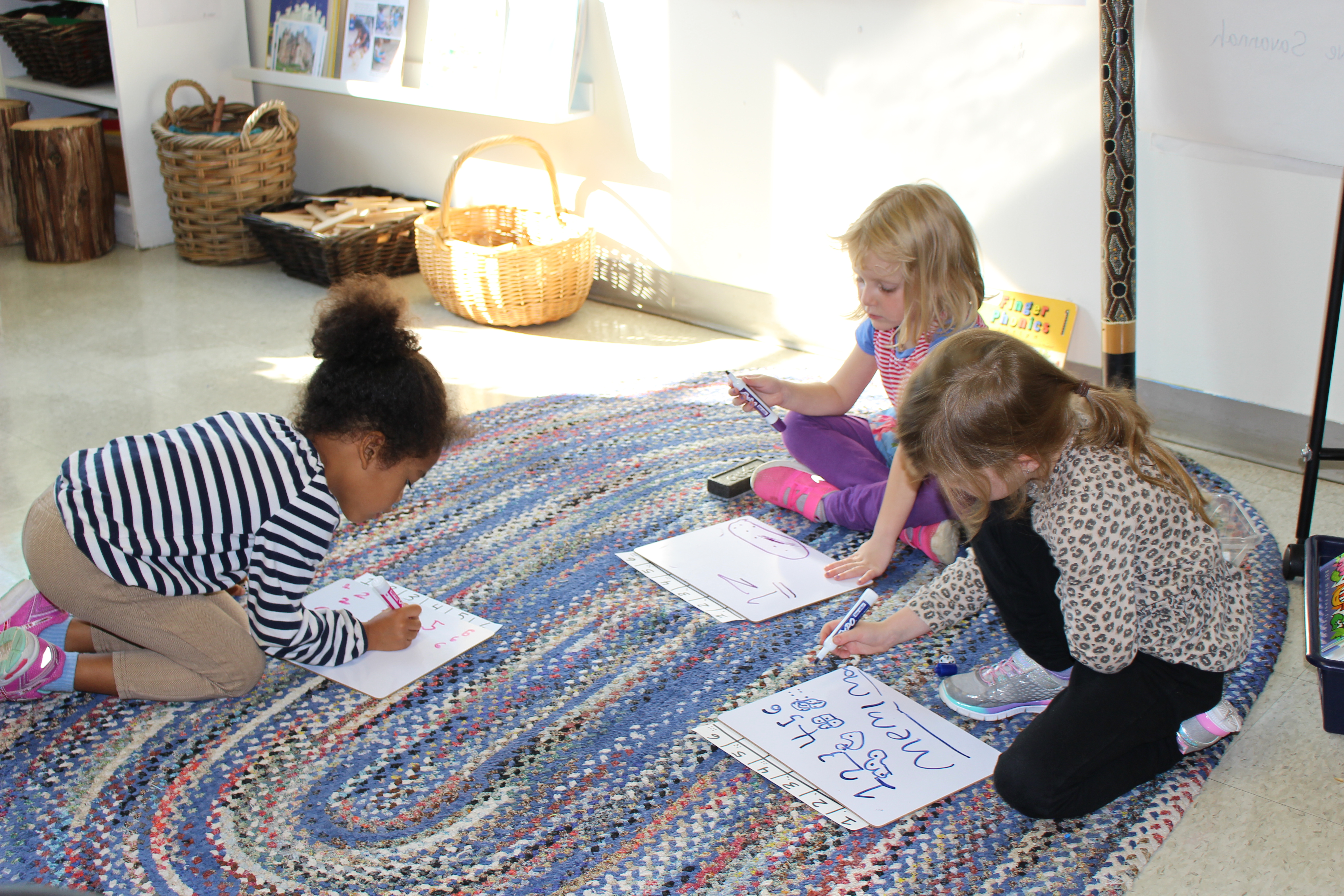 Although it is the end of the day before the long weekend, the girls are still keen to roll the dice and practice writing numbers or representing them with images and dots. I’d say we have some mathematicians blooming in this class!