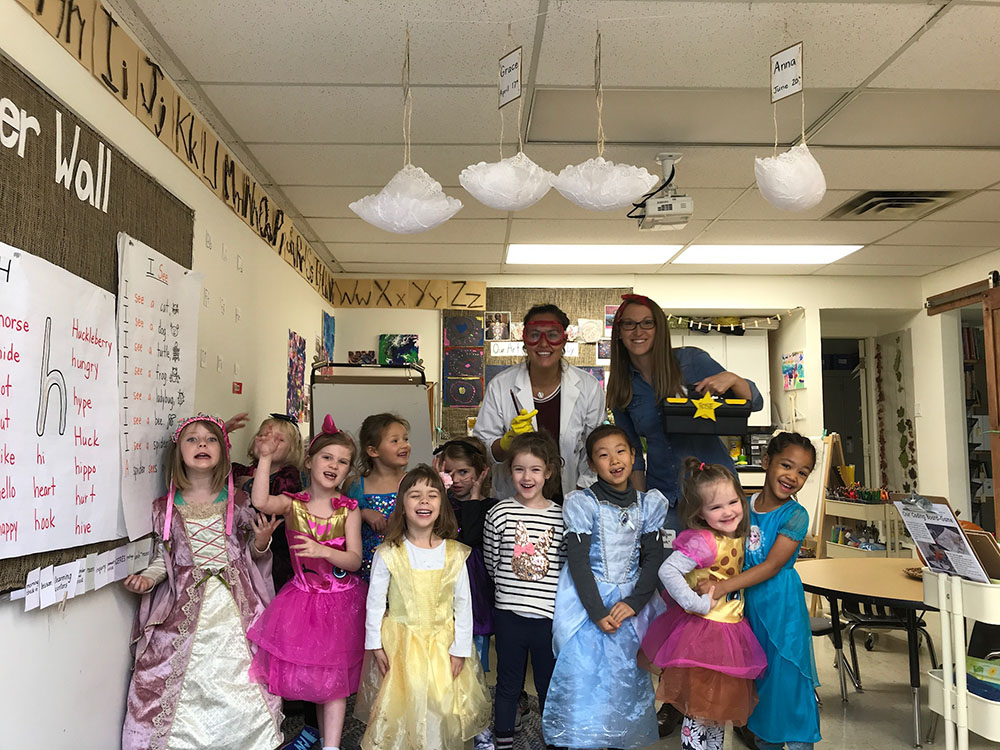 Happy Halloween! It was another energy-filled week at Linden. The girls were thrilled to wear costumes to school on Halloween and to even have “spooky centres” with the Grade 1–2s. In CERES class they continued to create stable structures and experimented with shapes and designs to best support stability. The Early Learners also enjoyed being creative while working at different learning centres, and they were eager to share their work with each other. Our week ended with a peaceful walk through the garden at the park, followed by some free-play time at the playground. 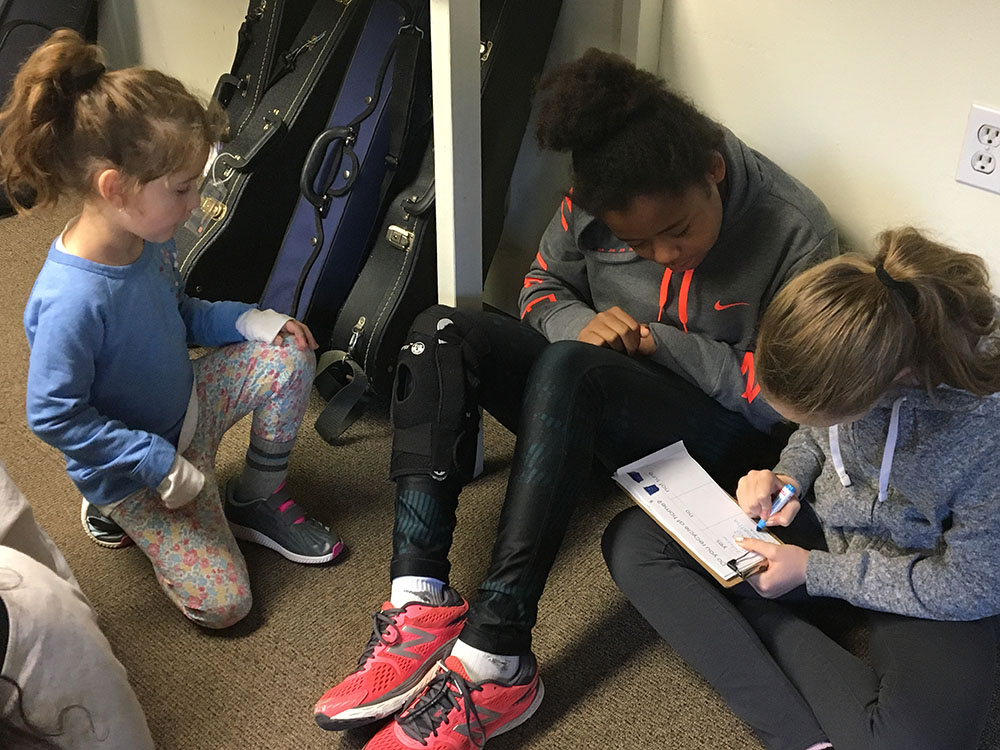 K surveys two girls in grade 8 in preparation for Social Justice Data Fair. Her research question is “do you recycle at home”. K notices that most girls seem to be answering “yes” in her survey. 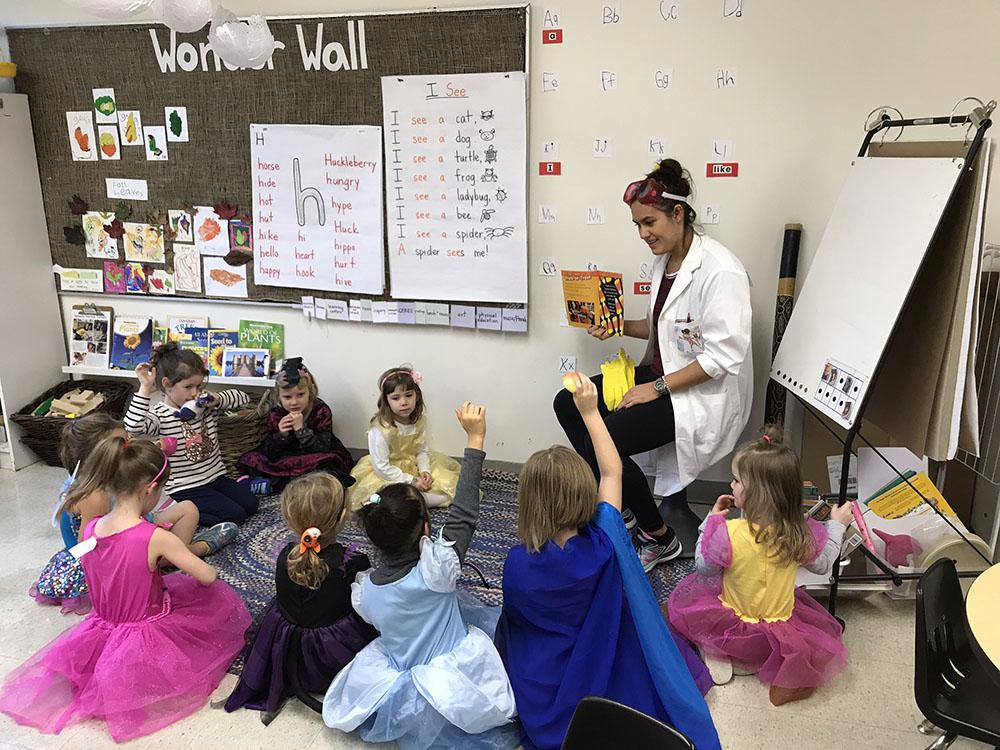 Ada Twist, Scientist reads the non-fiction book “Halloween” to the Early Learners and Grade 1-2s first thing in the morning on Halloween. They loved sharing their Halloween traditions with each other. 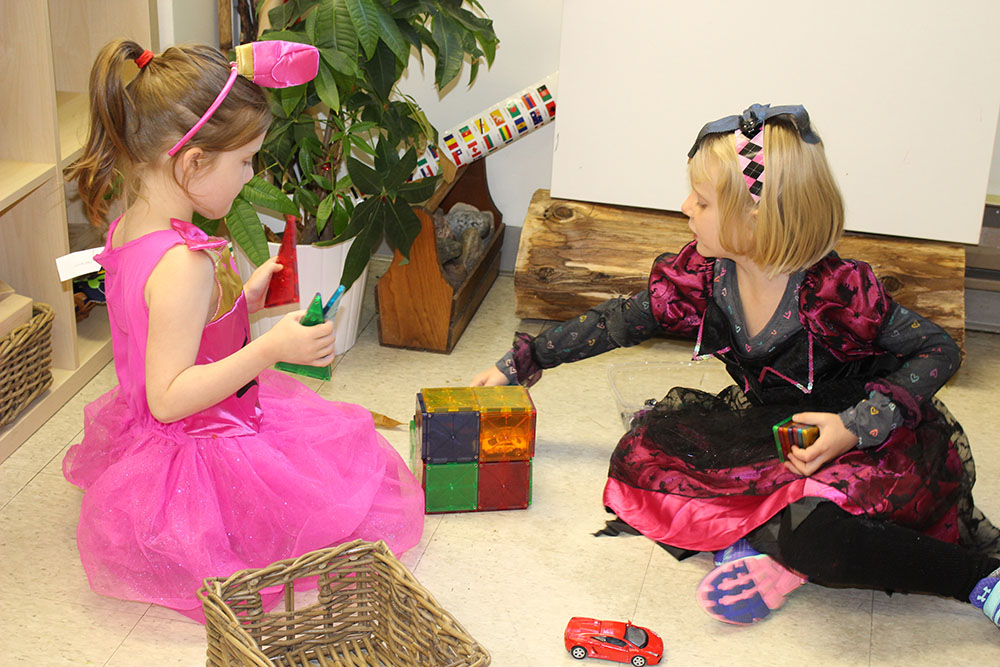 G and G build a haunted Halloween building during our "spooky centres" time together. 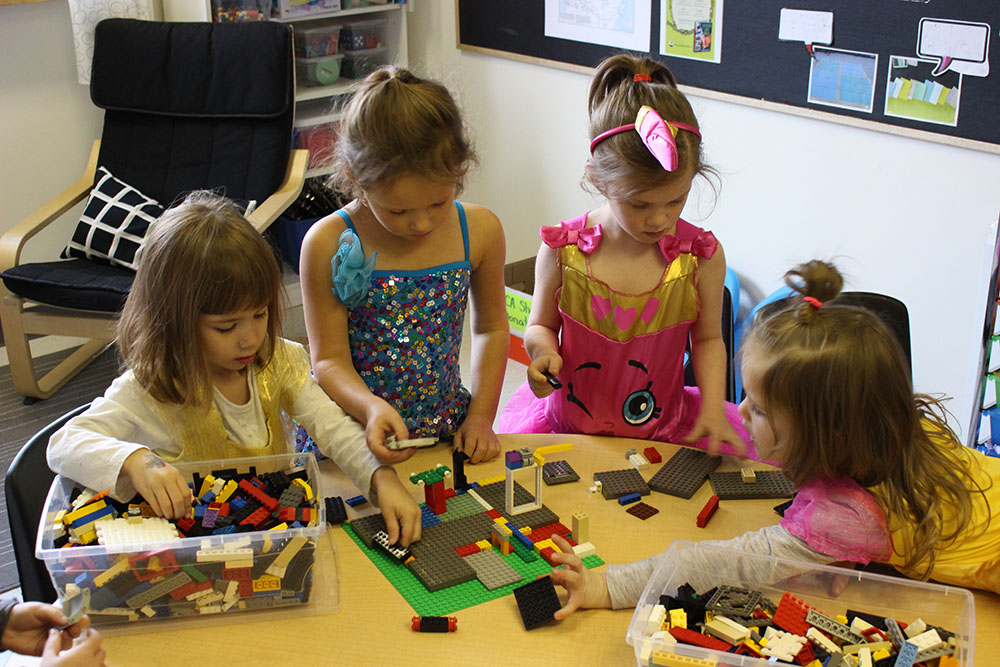 A, K, G, and P create a Halloween scene using Lego. They did well sharing their ideas, the space, and the materials, and enjoyed designing together. 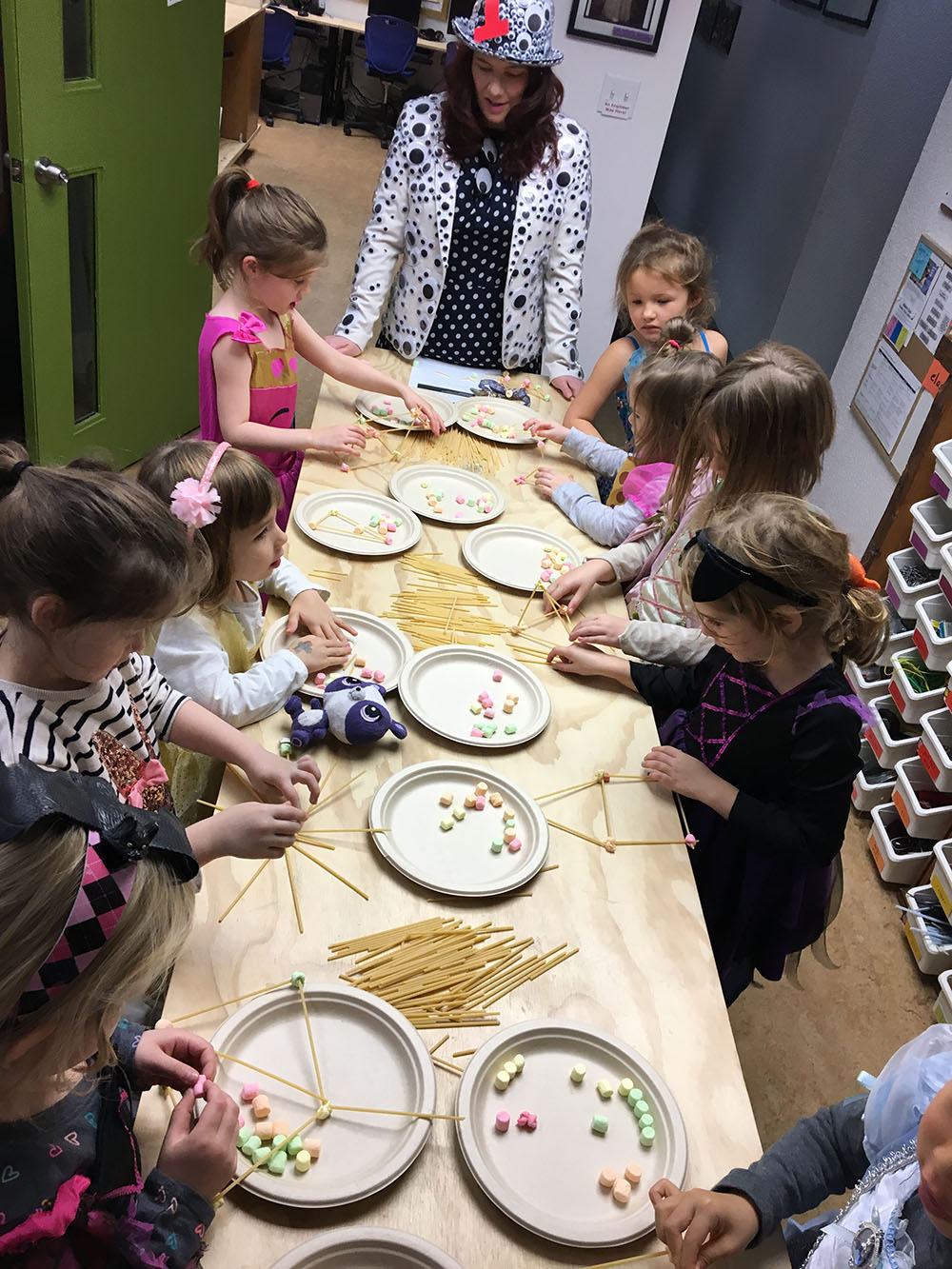 In CERES, the girls use bucatini and colourful mini-marshmallows to build structures. Despite being tempted to snack while they were building, all of the girls focused in on only using the marshmallows as building tools. 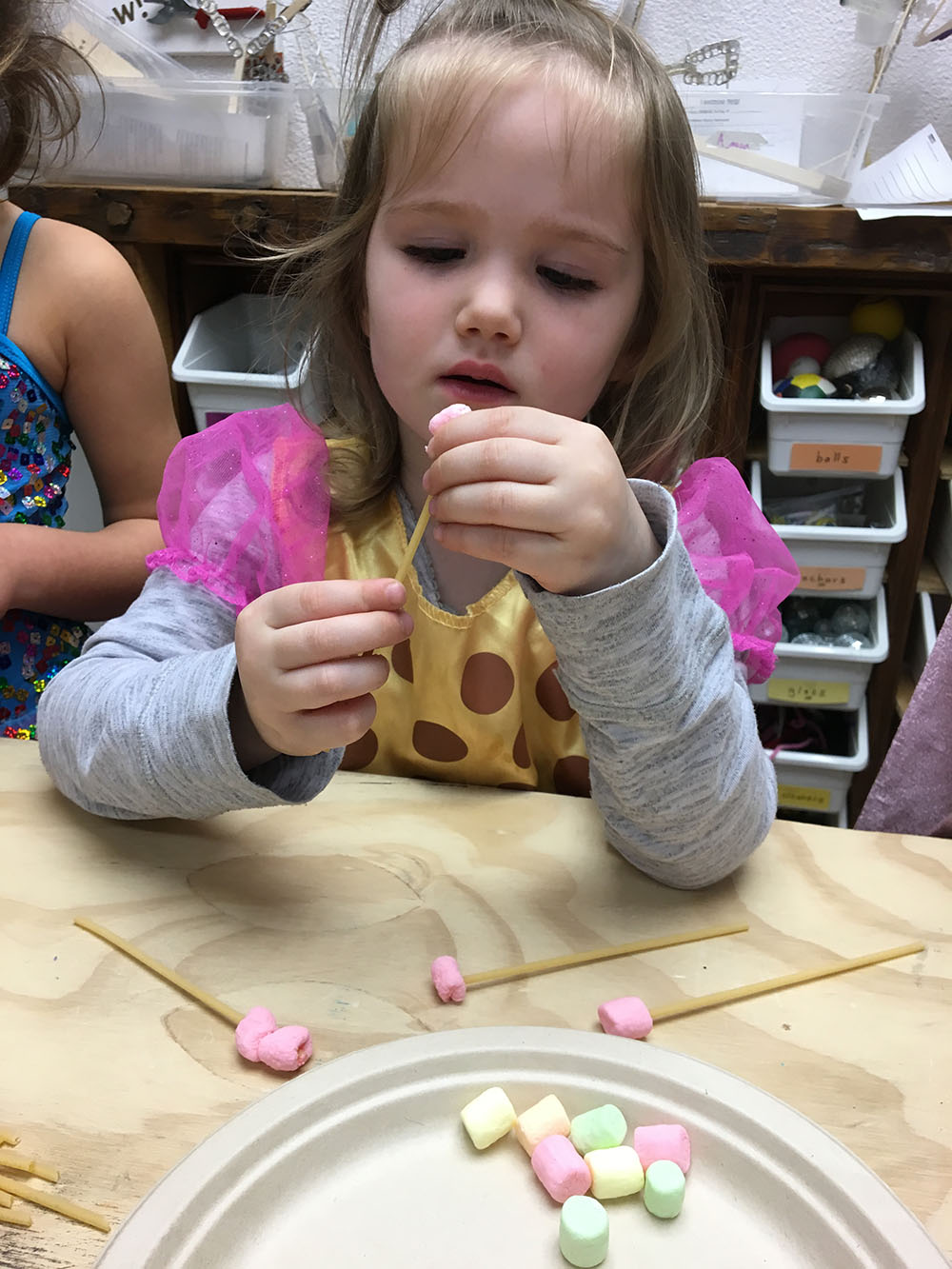 P threads marshmallows on the bucatini to prepare them to be attached together. 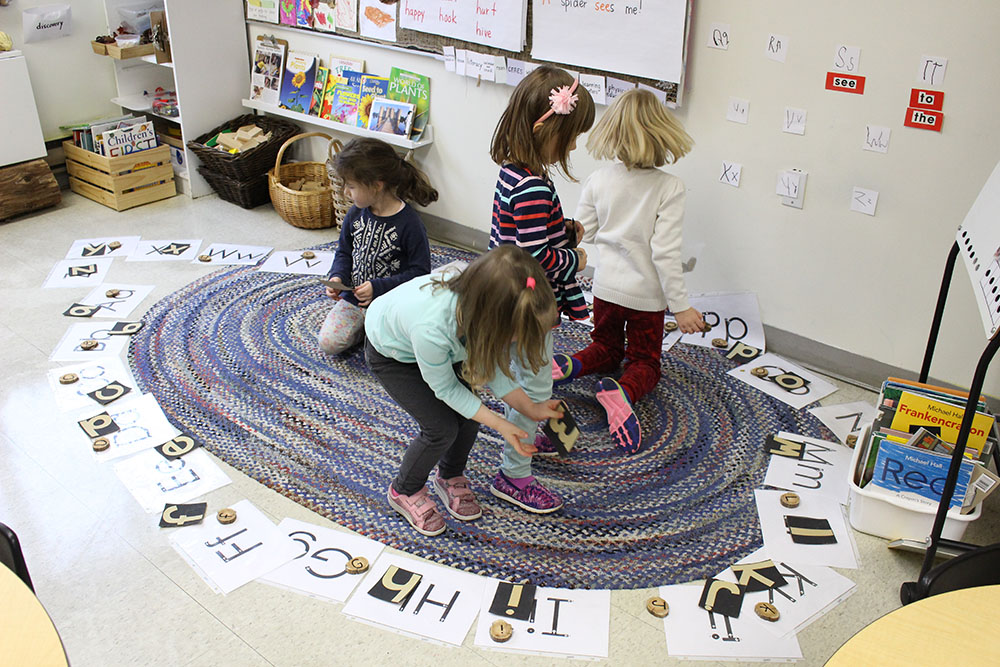 The girls work together this morning to alphabetize our various letter materials. There was lots of singing the ABCs, as well as referencing materials with the sounds we have been working on. The G and K used their alphabet expertise to help P and A along the way. 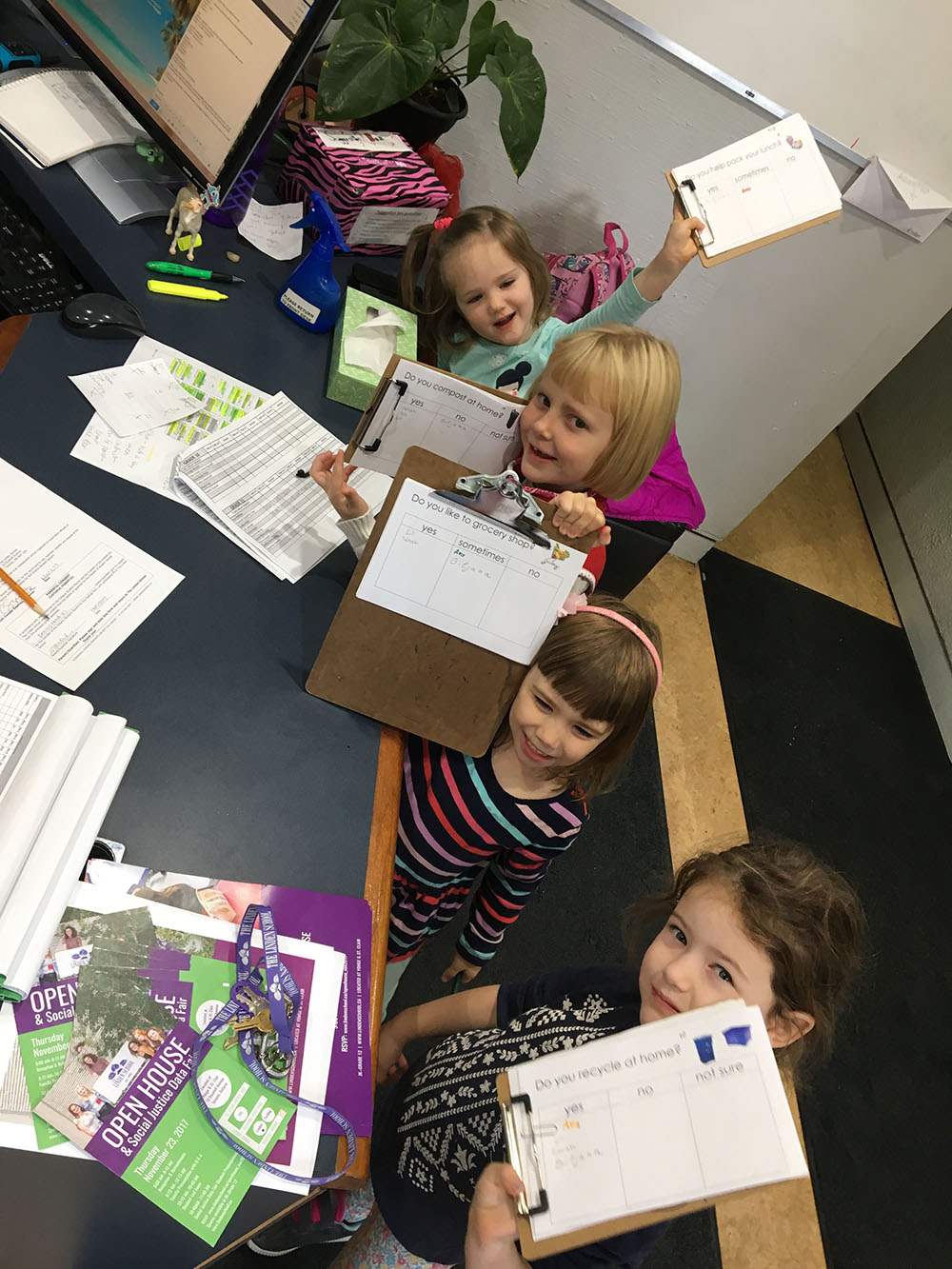 Look at the surveys the girls are taking. We are at the front desk asking our questions to Mel. 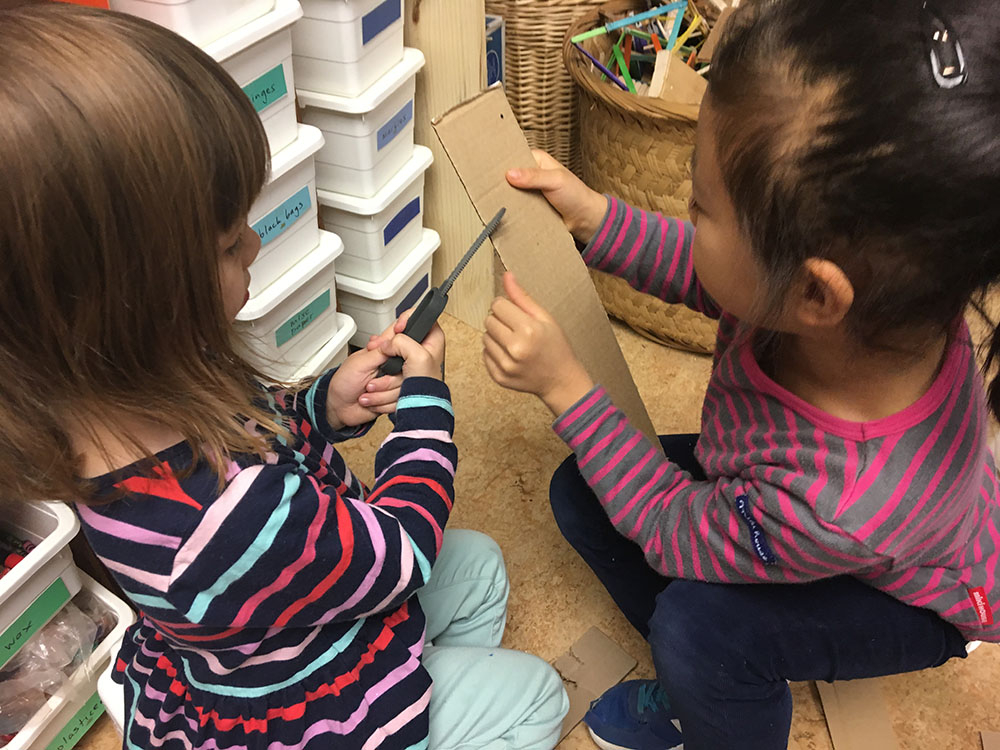 A works with M to cut down the cardboard she wants to use in our collaborative structure. 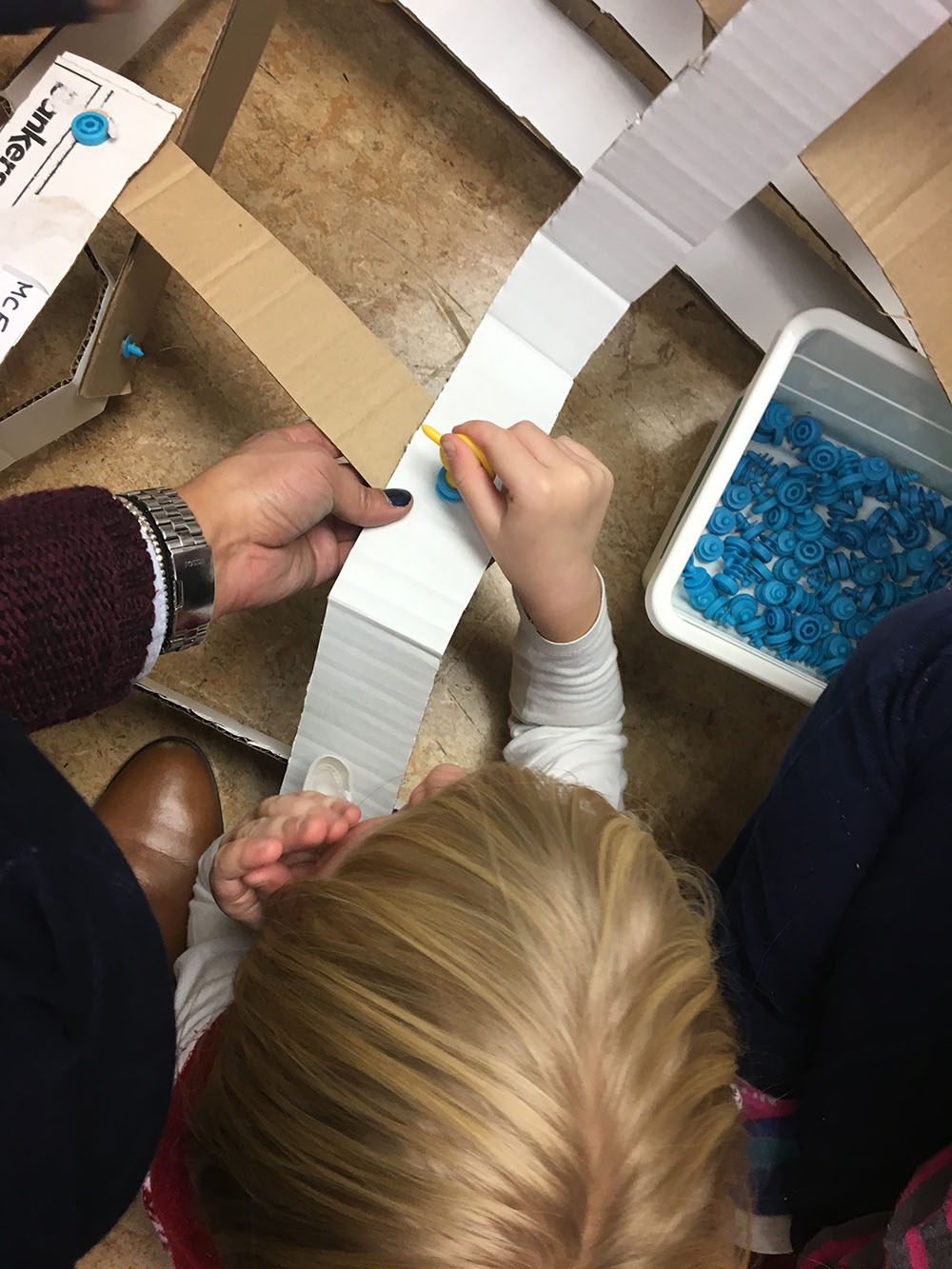 G twists the makedo (a material for fastening cardboard together) into the cardboard strip that she punched a hole in. She wants to make sure it's secure and tight before moving on to the next piece. 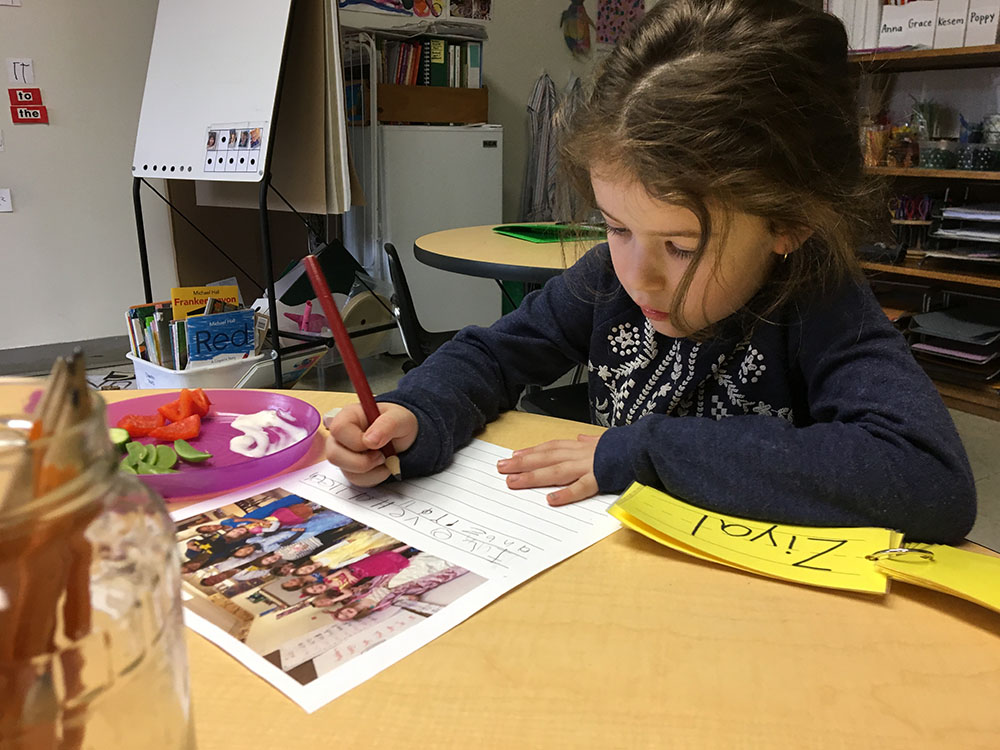 K writes about our fun-filled Halloween day during Writer's Workshop. She describes all of the costumes that her friends wore. 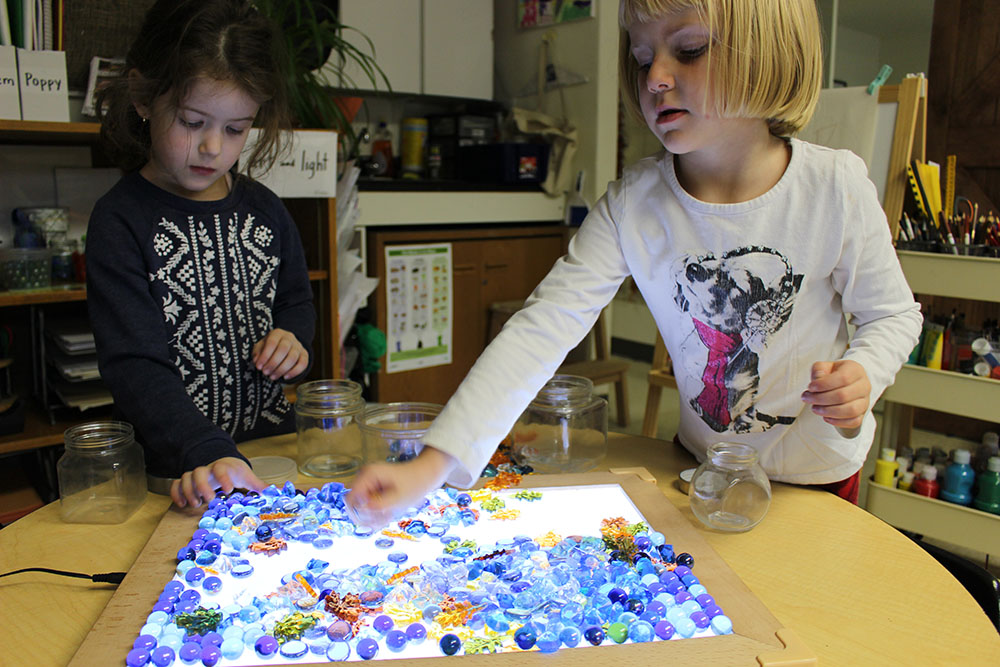 K and G collaborate at the Light Table. They start by choosing some of their favourite materials and adding them to the table. 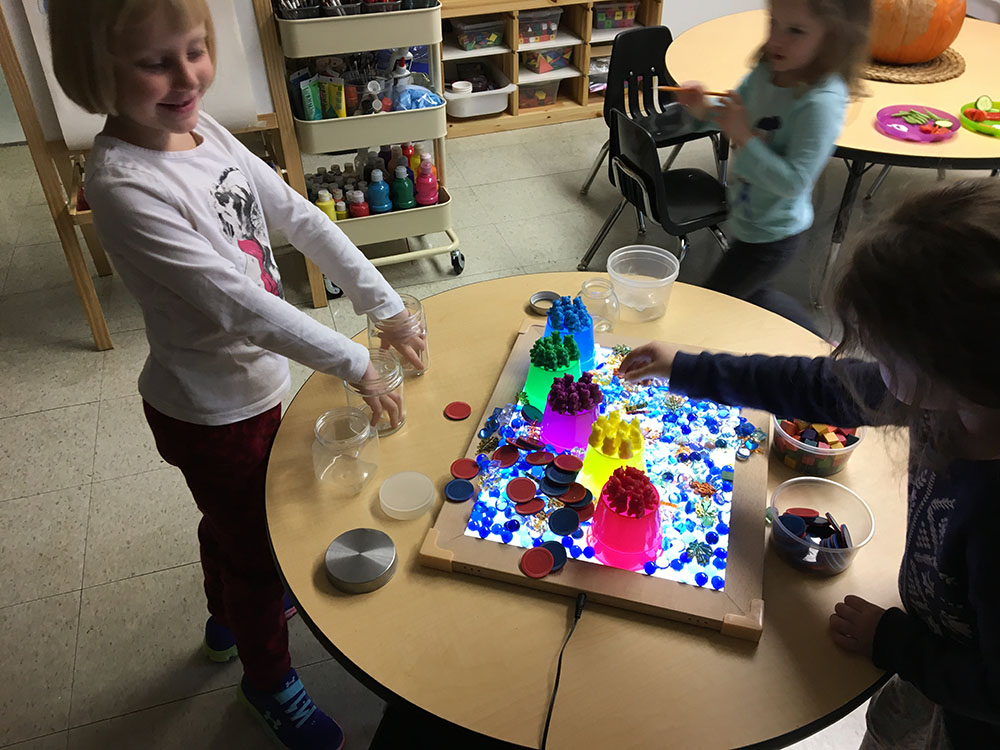 After some deliberation, G and K decided on adding a subway train to their design. It wasn't complete until the passengers were added to the subway cars. 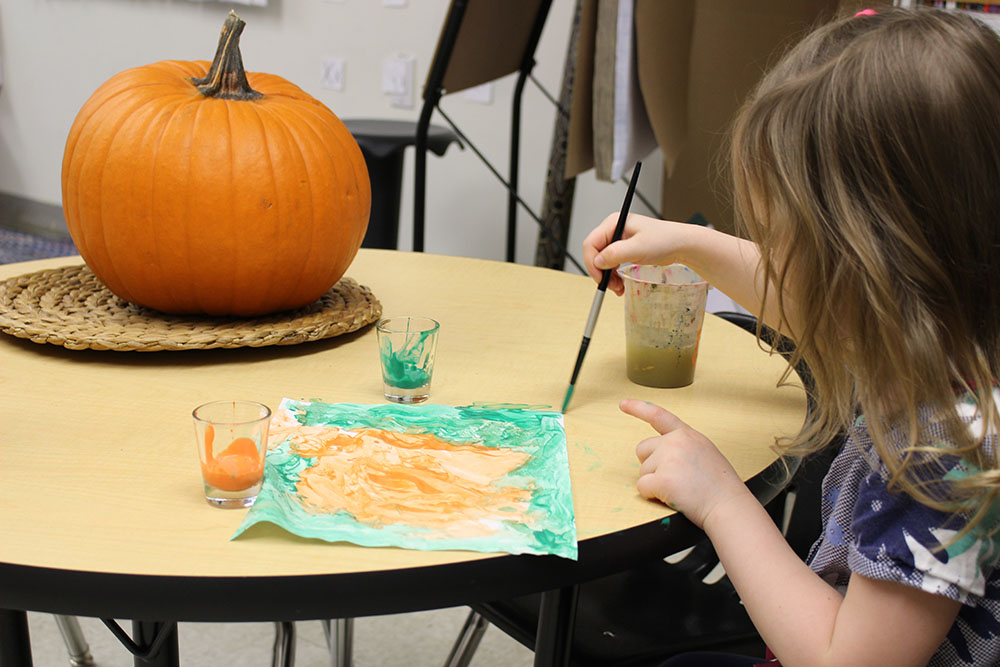 P chooses to paint the pumpkin that is leftover from Halloween. 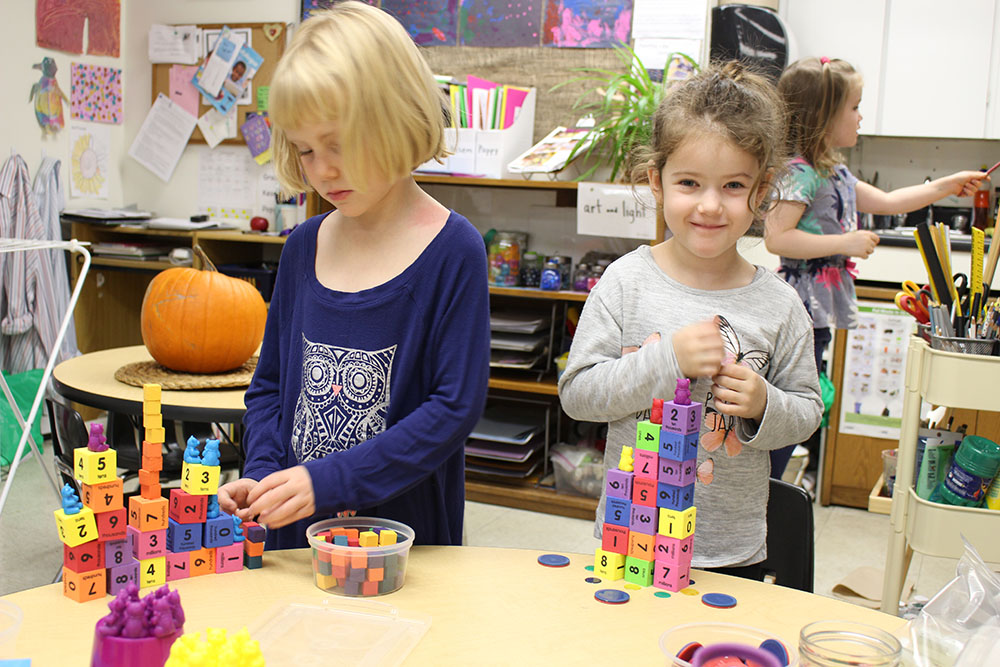 Lots of hard work at the Math Centre this morning. G started out wanting to make a staircase (something that she enjoyed doing last year), but after some discussion with K, both girls created unique math structures. 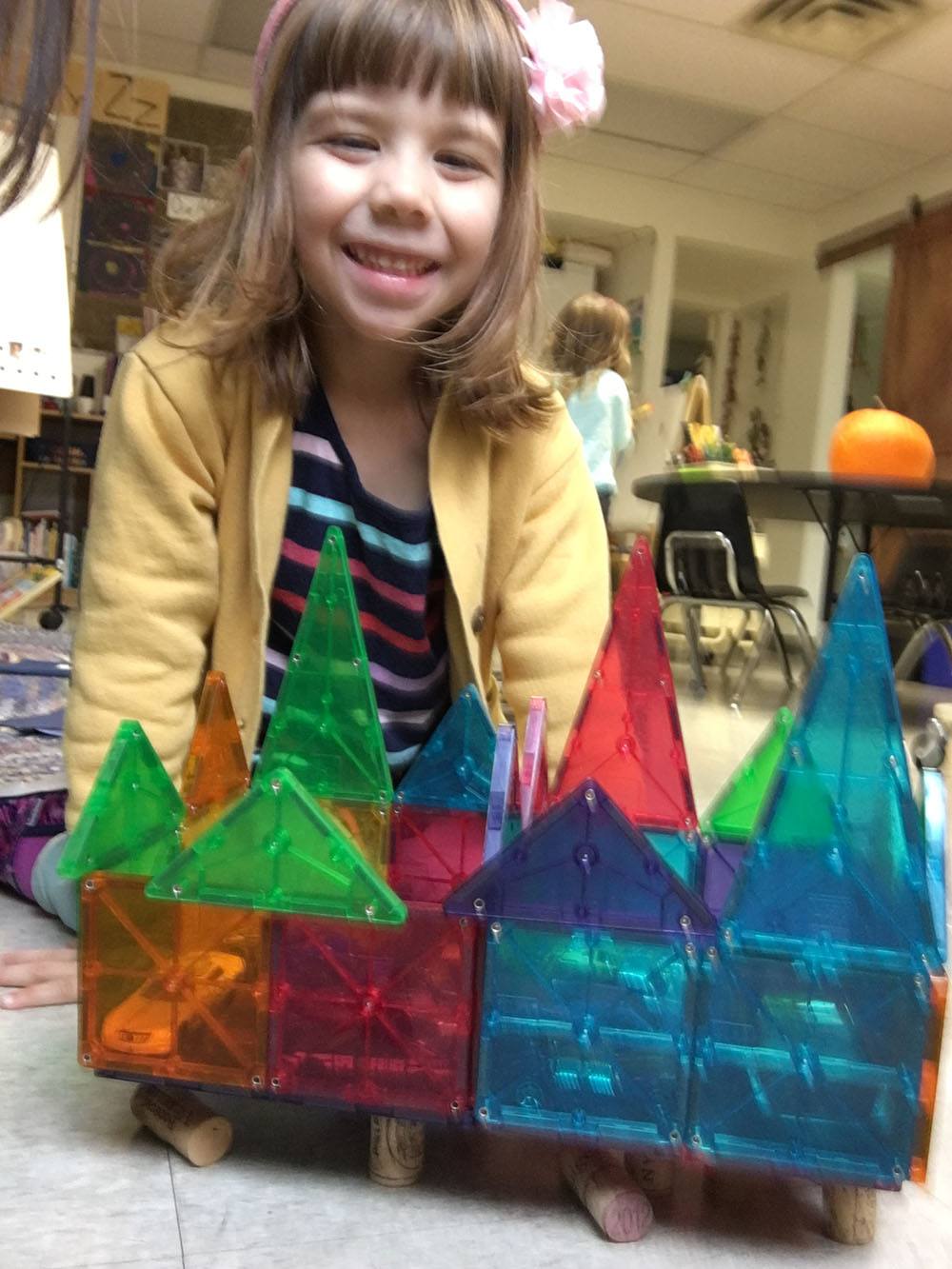 A is super proud to share the structure that she created while at the Building Centre. She made a parking garage that is higher up. I love how she used the corks as structural supports for her garage. 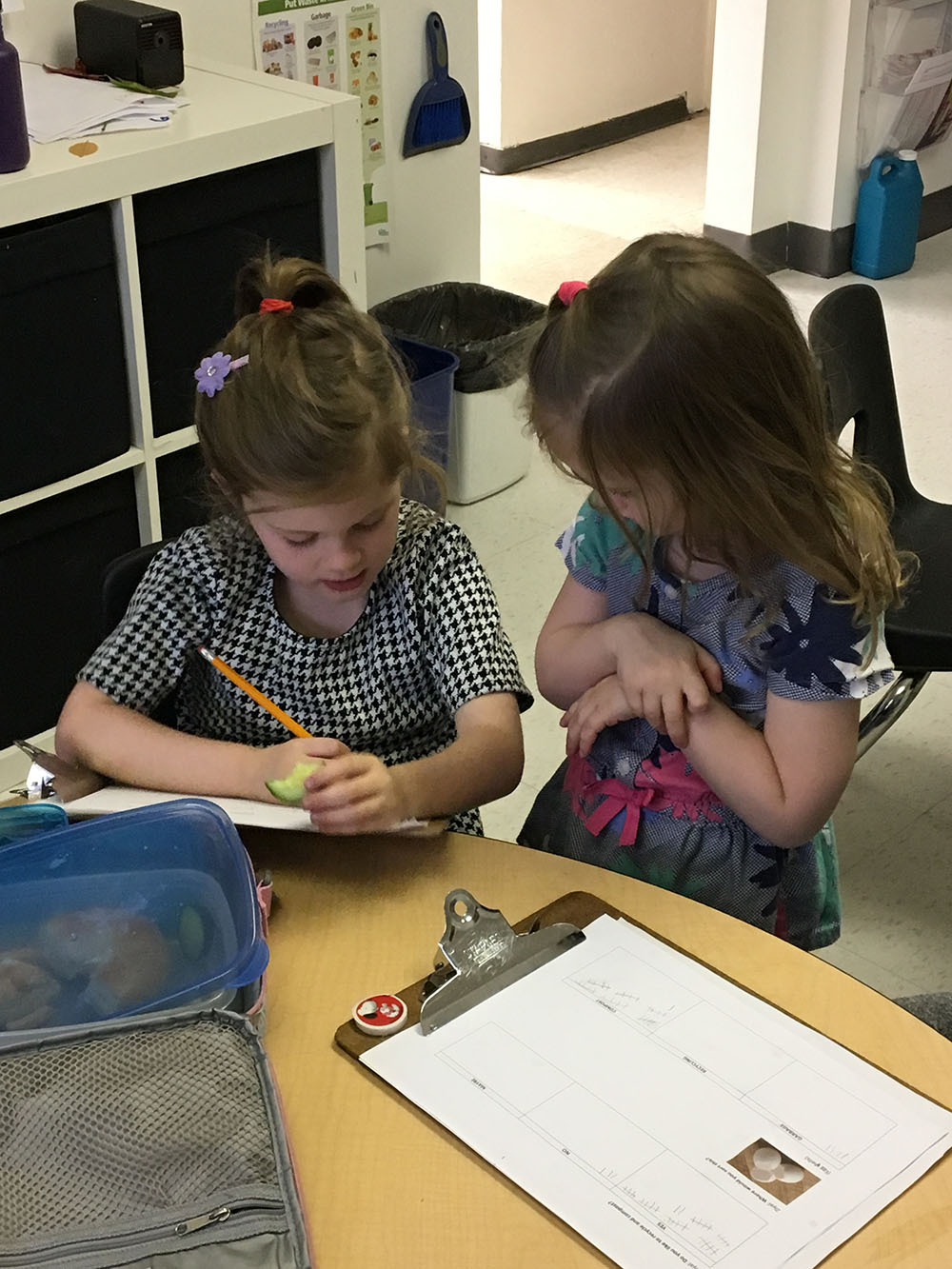 P is surveyed by G, who is in Grade 1-2, about where she would recycle certain items. All of the girls who are learning math in grades K-8 are participating in Social Justice Data Fair on November 23rd. 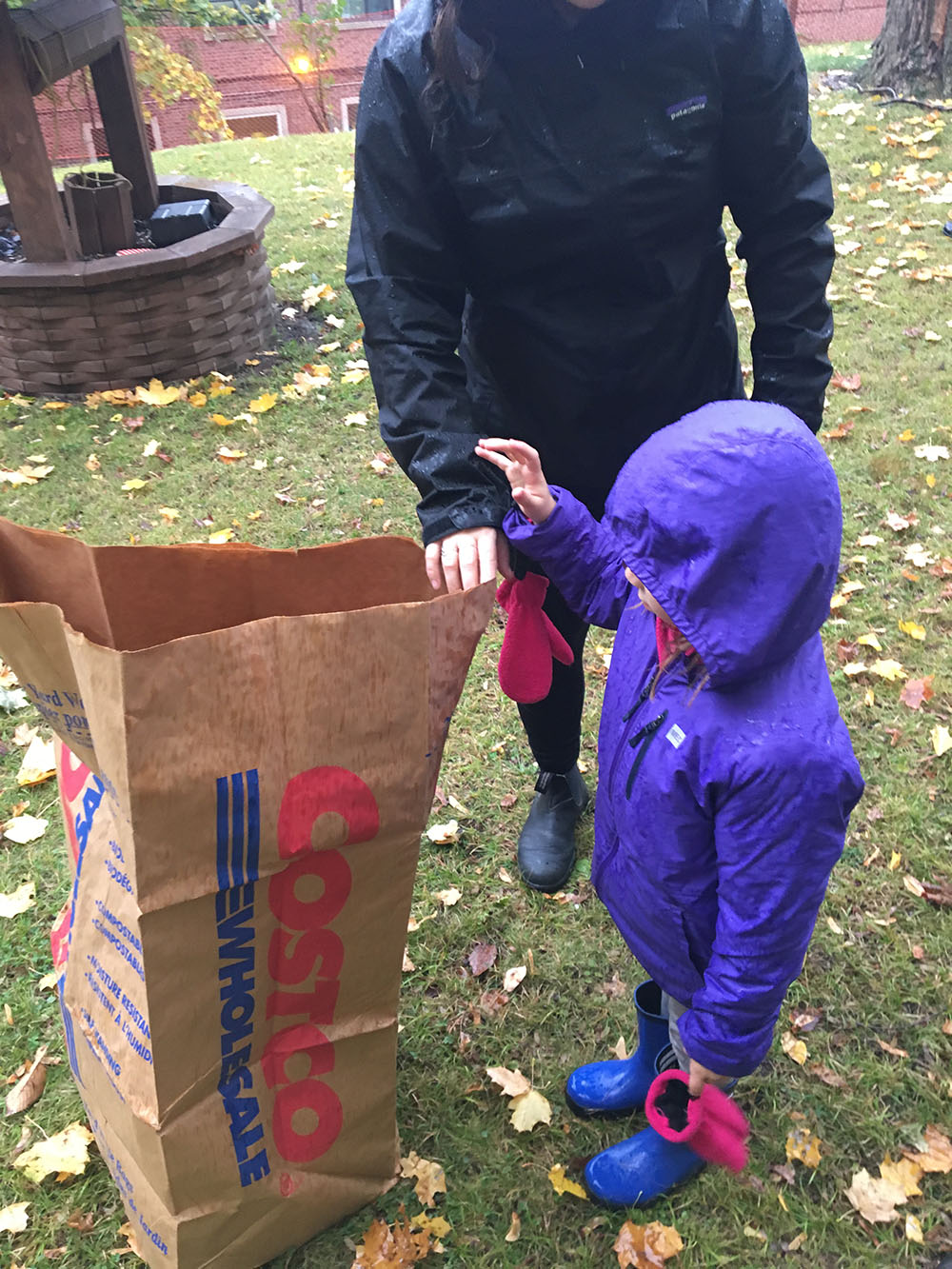 The whole school is raking leaves at the YWCA this morning during All School. Even though it is rainy, A is keen to pick up leaves and put them in the bags to help clean up. 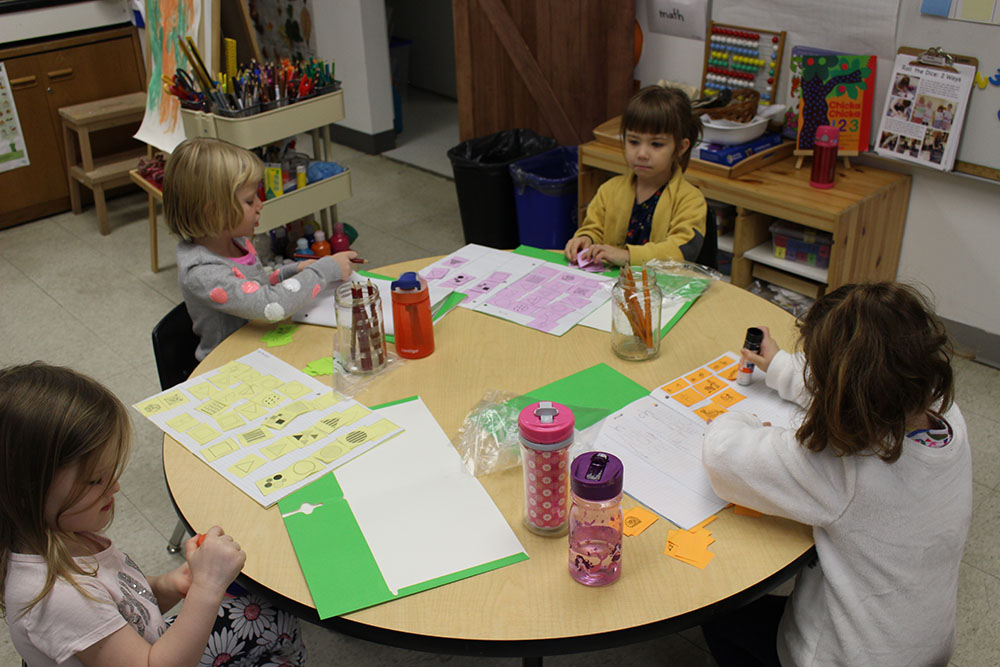 The girls do their final word / picture sort of the week this morning. A and P are sorting pictures into three categories: squares, triangles, and circles. G and K are working on the starting sounds /h/, /sh/, and /ch/. Today is "sort-and-glue" day! 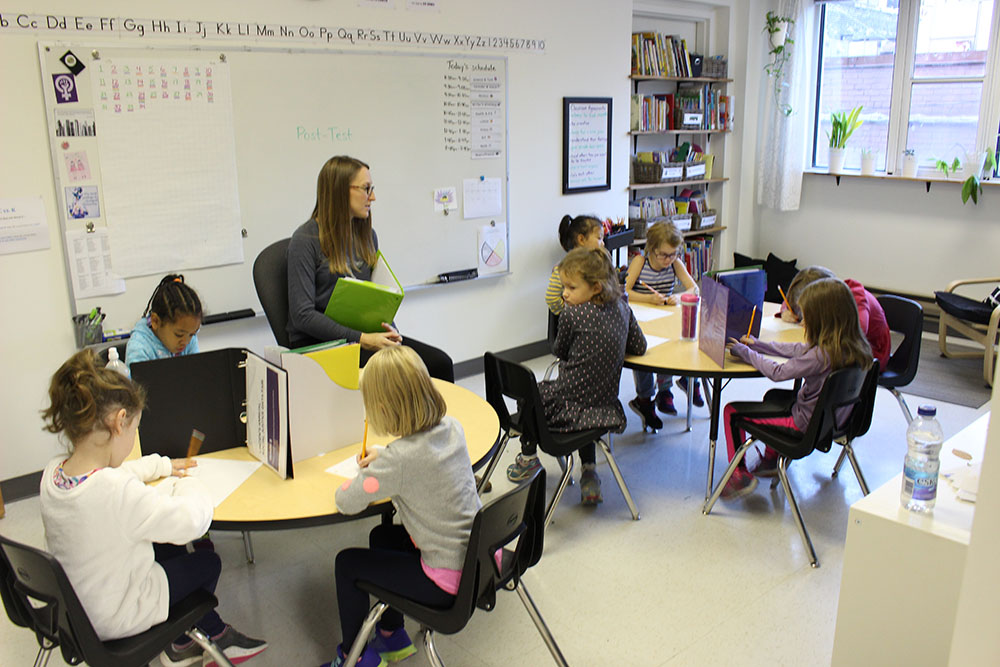 G and K sit in with the Grade 1-2 class to do their post-tests this morning. We want to see how they are doing with words that start with the sounds they've been working on this past week. Good news - they did great! 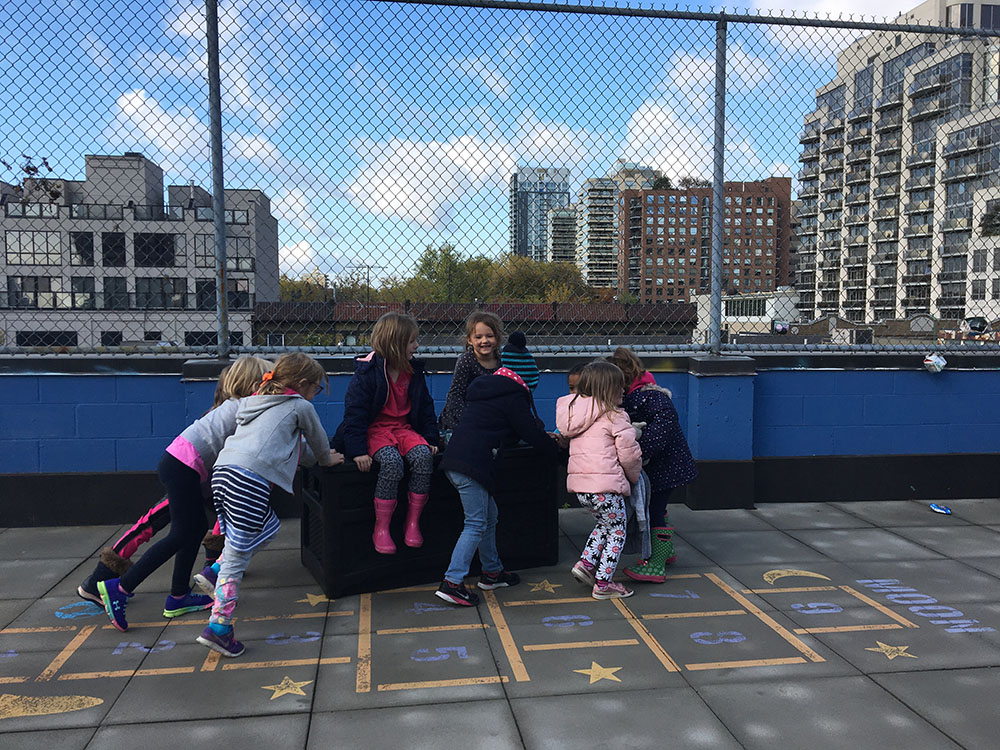 At recess the girls take turns pushing each other around on the equipment bin. As a group, they have figured out how to organize the turns, the pushers, and the pullers. It looks like fun. 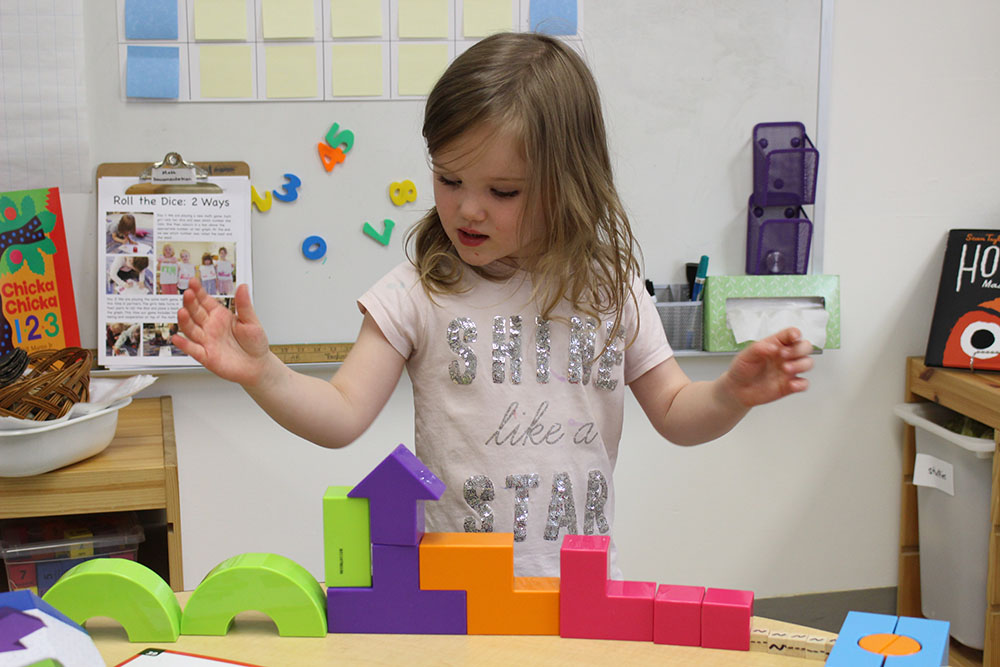 P is excited to share the train she has made at the Math Centre with the girls. We explored these new materials in a spatial sense activity this week, and P couldn't wait to try them on her own. 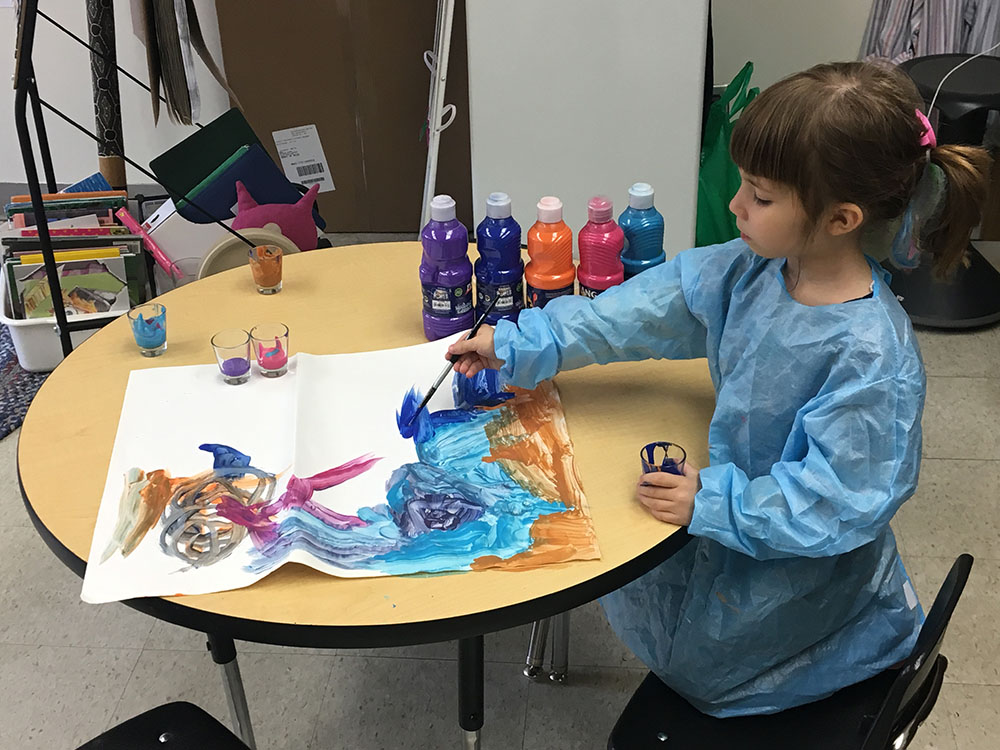 A tells me that painting makes her happy. What a nice message to hear on a Friday morning. She spends the whole time experimenting with colour mixing and is surprised to see the results sometimes. 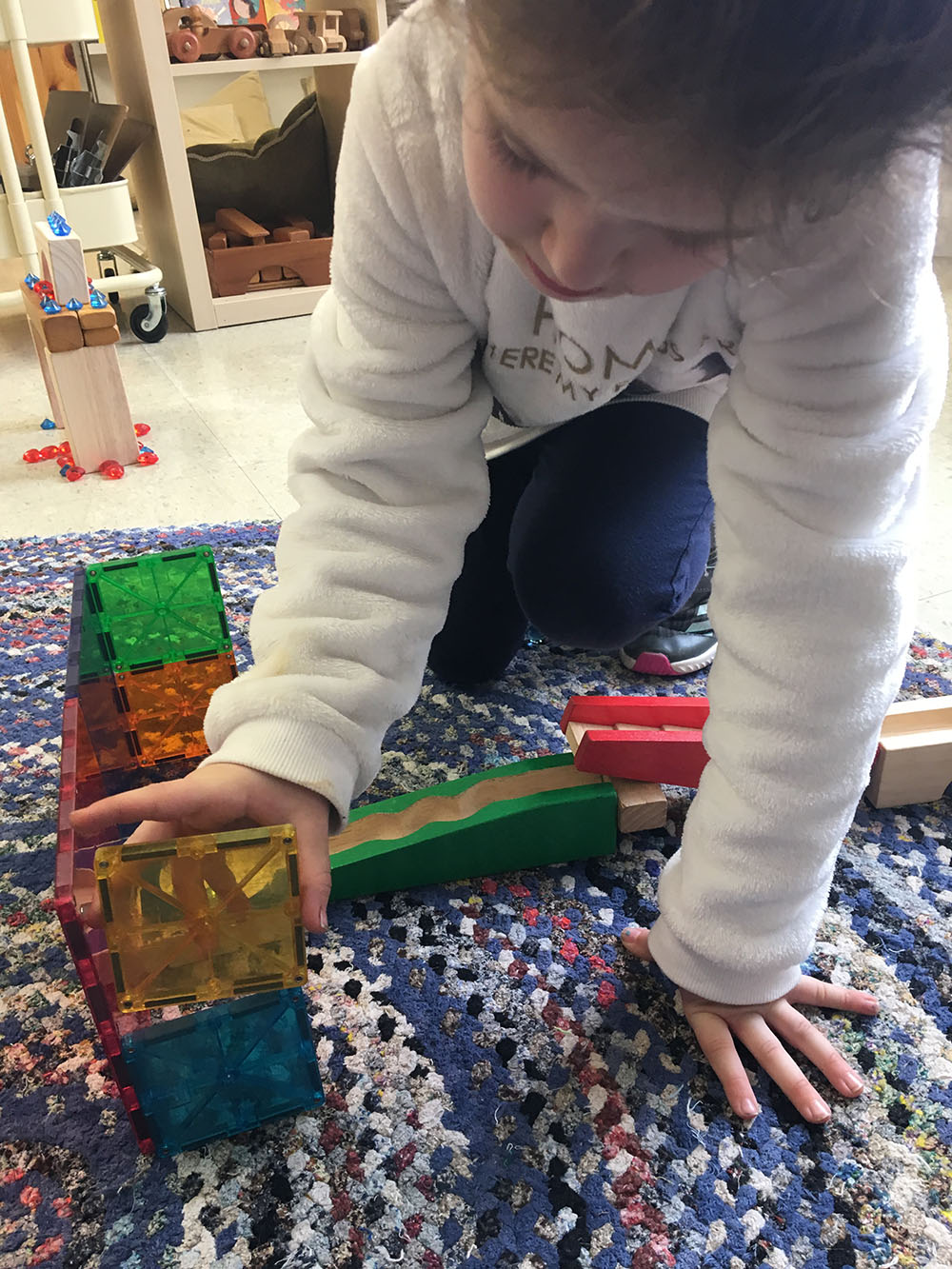 K sets up a wall for her marble run after noticing that the marbles keep flying across the classroom. She is using her engineering brain to find solutions to the problems she encounters as she builds. 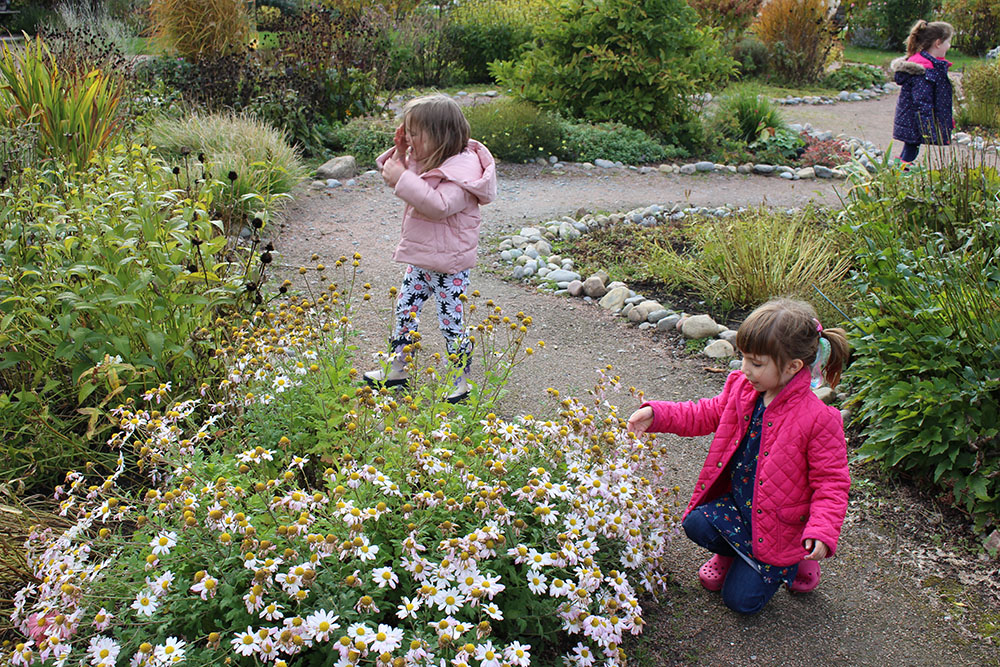 The girls take a peaceful minute to observe, touch, and smell the flowers in the garden by the playground. 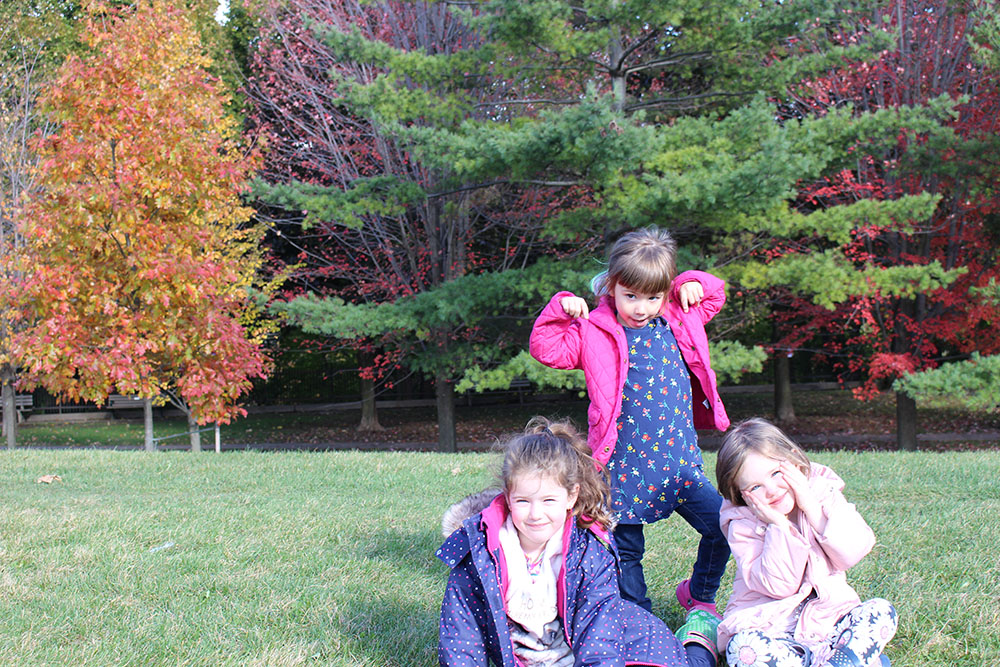 All smiles to end our week after a nice outdoor learning time.