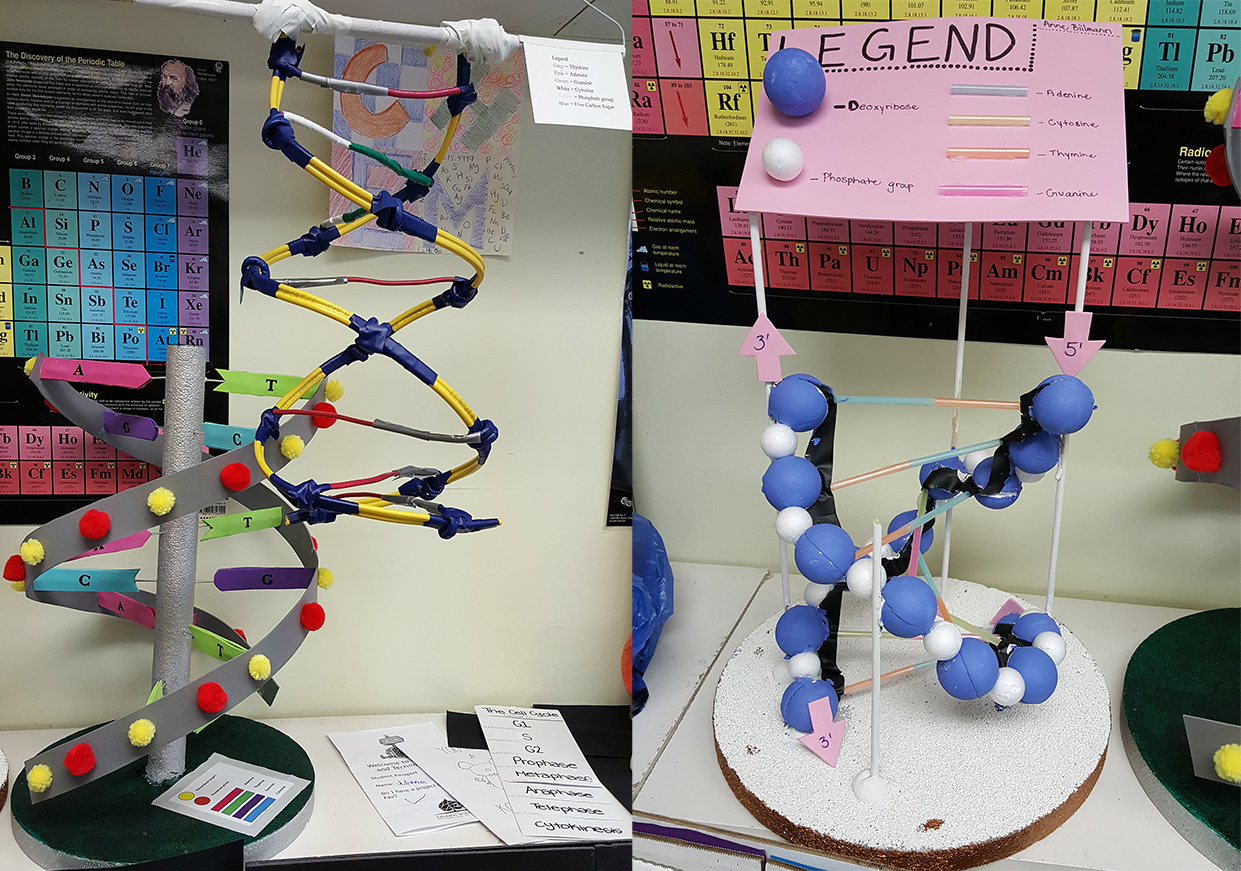 During their studies on Molecular Genetics, our Biology Grade 12 class completed an assignment entitled "Sexism in Science." For this project, they were asked to create a representative model of DNA and write an opinion piece on the struggles that Rosalind Franklin (and many women who pursued a career in the male-dominated science field) faced during her career and how those struggles influenced her work. Rosalind Franklin was an English chemist and X-ray crystallographer whose contributions to the discovery of the structure of DNA were primarily recognized posthumously.

In 1953, James Watson and Francis Crick announced their discovery of double helix, twisted structure of deoxyribonucleic acid (DNA). This discovery was a tremendous milestone in molecular biology and in 1962 the two men (along with Maurice Wilkins) were awarded the Nobel Prize in Physiology or Medicine. However, many other scientists contributed to the large amount of research that led to their amazing discovery.

Rosalind Franklin was one such scientist. She was an ambitious and passionate scientist at King’s College in London. She worked closely (and with constant friction) with Wilkins. During that time, she perfected her skills in X-ray crystallography, eventually making it her life’s work. Unfortunately, this work would later lead to an early death by ovarian cancer in 1958. While at King’s College, she took an image of DNA that pointed to a helical structure of B-form, known as Photograph 51. Unknown to Franklin, Wilkins shared some of her unpublished data, including “photo 51.” The X-ray diffraction image inspired Watson and Crick to create a model of DNA. While Wilkins received credit for his contribution to the structure of DNA, Rosalind’s name was never mentioned. Instead, she was referred to by Watson, Crick and Wilkins as a difficult, antagonistic woman as a way to diminish her work as a scientist.

“As a woman in a male-dominated field, Franklin encountered many roadblocks. When she first started her fellowship, her colleagues immediately assumed she was a lab assistant and not a colleague of equal standing. Rosalind Franklin took an X-ray diffraction image of DNA fibers that is known as "photograph 51." With this, she discovered that DNA makes a double helix showing that what previous scientists believed about DNA was incorrect." — Anne Biilmann

“The constant scrutiny Franklin was subjected to insisted that she work cautiously, methodically and diligently leading me to conclude that the prejudice she faced actually bettered her career in the long run. She refused to let the opposition win, and produced tremendous advances in her field.” —Toni Spilfogel

“Four years after Franklin’s death, Crick, Watson, and Wilkins were awarded a Nobel Prize for discovering the structure of DNA without acknowledging Franklin’s contribution to the discovery. She deserved recognition just like her other colleagues because, without her, the research would have taken them longer.” —Amira Lebreja