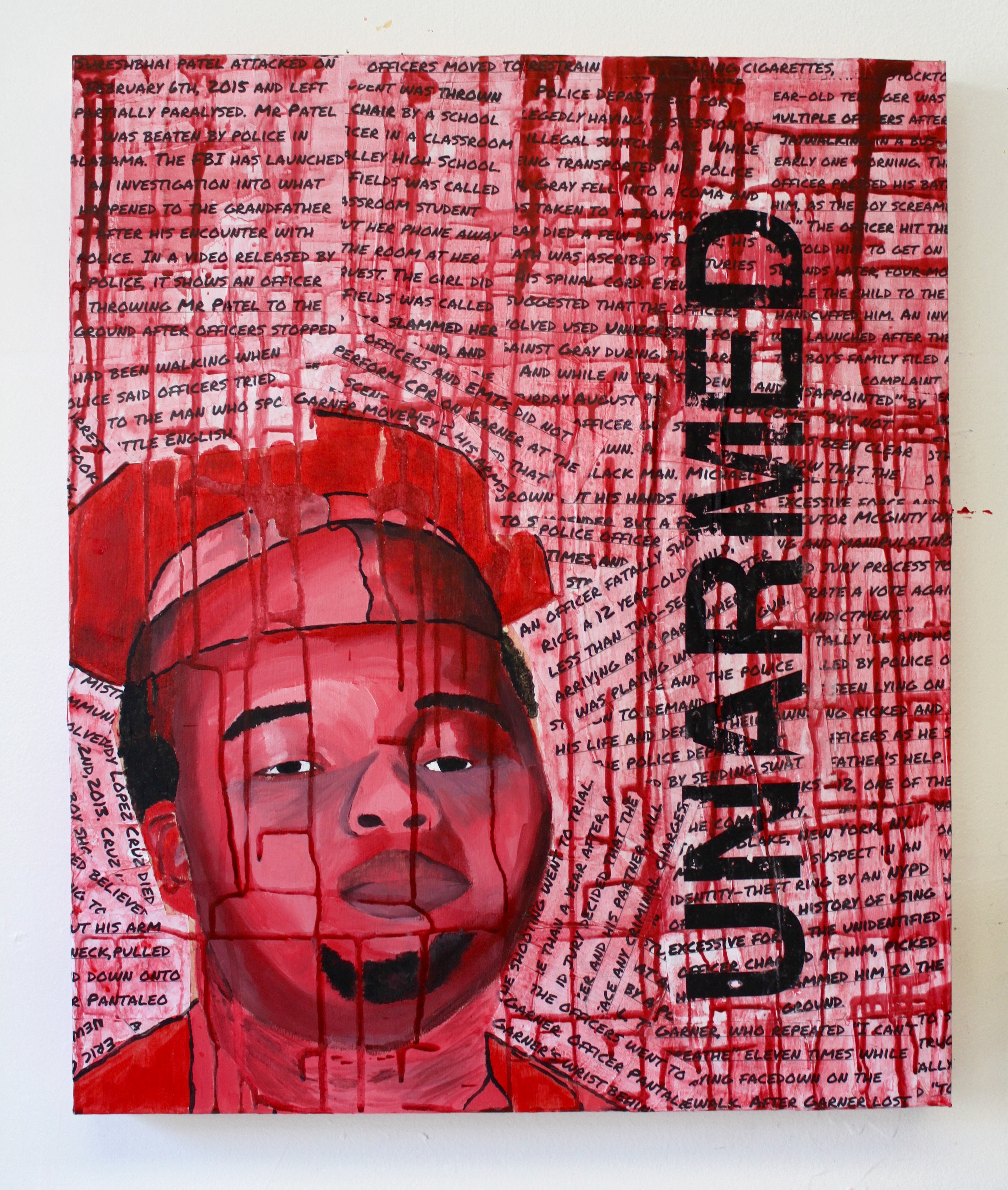 The artwork is called “UNARMED,” it represents the violent treatment of people of colour by police officers. In the background, I collaged stories of unarmed people killed or brutally beaten by the police in 2015 alone. The monochromatic colour I chose was red, it represents the blood of those who were killed because of their skin colour. It also represents the anger and frustration I feel towards this subject.

I chose this subject because it's a topic that I hold close to my heart. It’s frightening to think that those who are supposed to protect me could kill me because I am a person of colour. It’s frustrating because what gives them the right to decide whether I live or die? How can someone determine my life span? In many cases, the shootings that occur are not based on crime at all; it’s because the racist beliefs the police uphold. The worst part is that a numerous amount of officers involved are not accountable for their actions.

The image I chose to show in this art piece is Michael Brown. I chose a picture of him because he is a well-known symbol of police brutality in America. Browns’ story was one of the first heavily reported stories; it sparked many protests and riots, protestors raised their hands as a symbol of surrendering and chanted “hands up, don’t shoot.” People all over the world heard about his story and his face will be remembered by many.

Through this art piece is solely about occurrences in America, it does not mean that it doesn't or can’t happen around the world. It has a domino effect; where one event can cause a series of similar events to happen in a short amount of time. An officer may think just because another officer was not held accountable for their actions, they can act in the same way.

I enjoyed working on this artwork because like stated before this topic is something I hold close to my heart, I wanted to make a statement about this subject; to really make an impact. 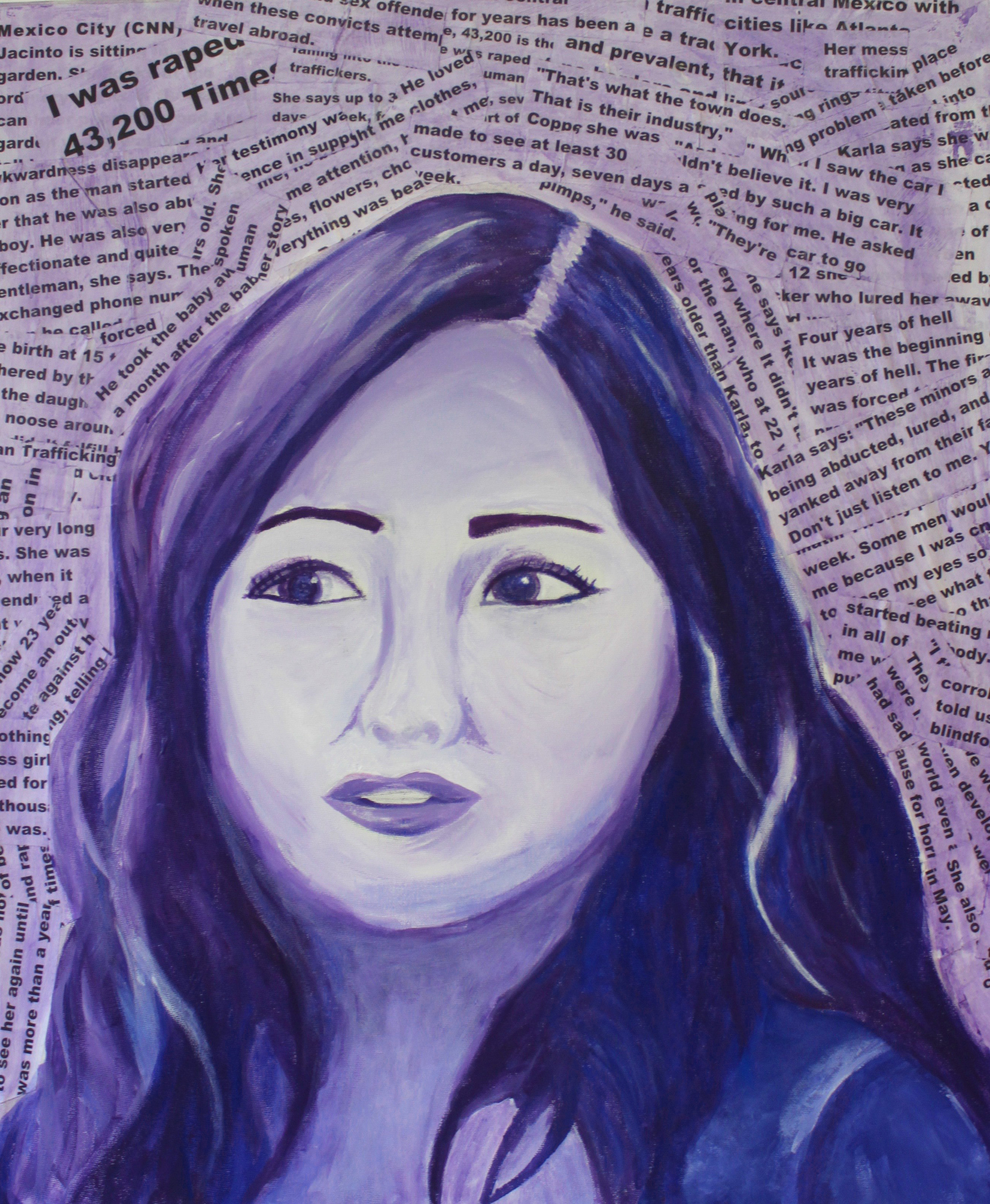 The social justice issue I chose to comment on is sex trafficking. Sex trafficking is the trade of humans for the purpose of sexual slavery and commercial exploitation.  This is often a topic that is not commonly spoken of and I think that it is important to raise awareness to this issue. Most people believe that slavery in the modern day has been demolished but it is not true. This is a $32 billion industry; most women and girls are trafficked into the sex industry. Each year around 800,000 of women and girls are trafficked across international borders. In many less developed countries, this is their largest business this includes countries like Mexico, Brazil, India and many other regions around the world.

The image I chose for this art piece is a portrait of Karla Jacinto. She is a survivor of the sex trafficking industry; Jacinto has now become an advocate for this issue. The color I chose to use is purple. The color purple is a mixture of red and blue, these colors were chosen because red is often associated with pain and blue represents sadness. The mixture of these two colors creates a warm aura. This issue is significant to me because it's something that many women face in our current day society. In order to make the art piece more effective, the text in the background should have been a little larger since it can be difficult in reading the news article from afar. The text I chose to use for this art piece was the interview Jacinto did with CNN. In this article, it describes the problems she faced as a sex worker.