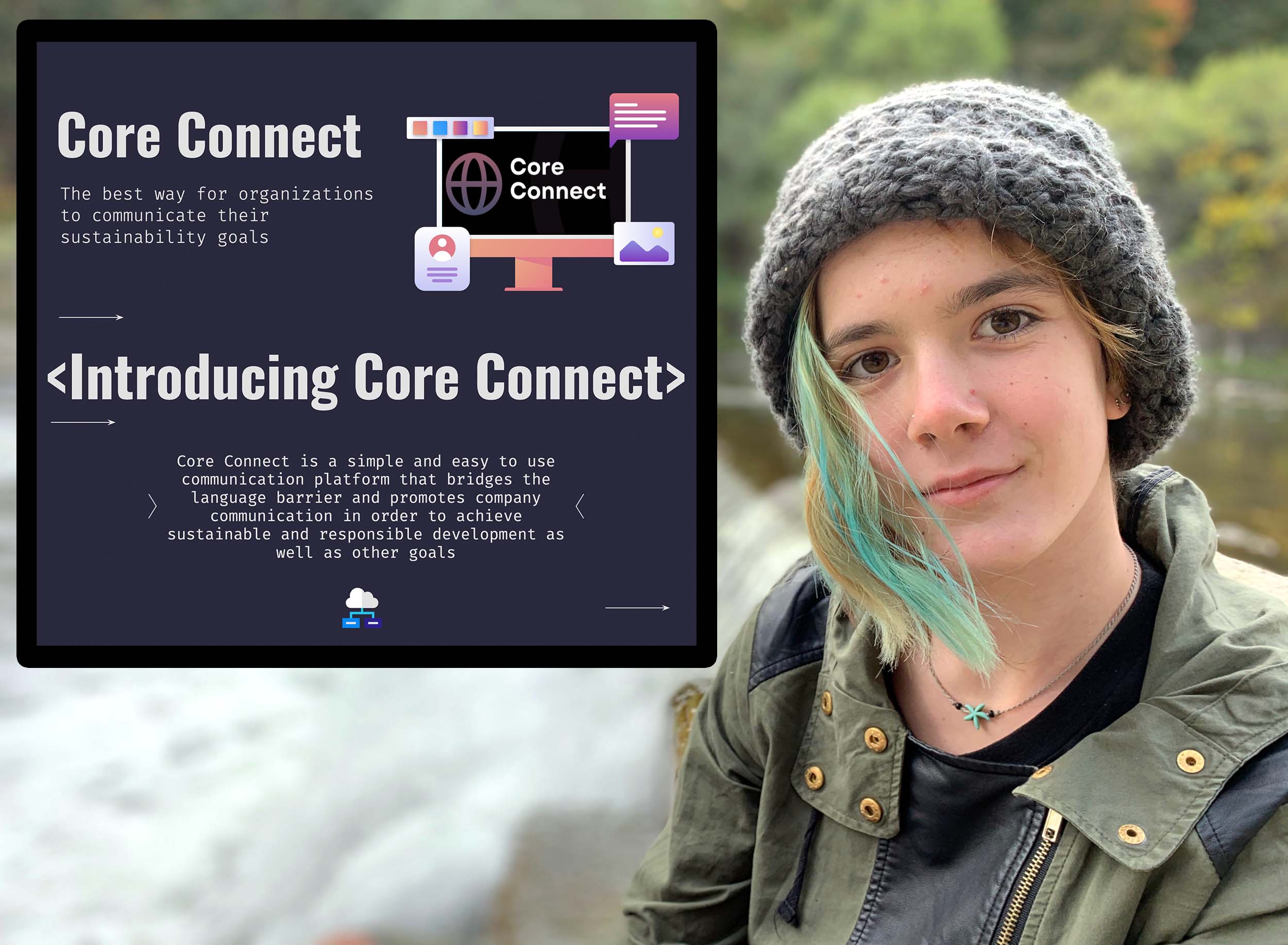 In our last edition, we shared news of Sang Lee’s Grade 12 Computer Science class’s success in the Star Hacks Building Bridges Hackathon. They spent an intense weekend coding as a team, ultimately creating a wonderful resource for high schools to use to select courses. That wasn’t enough for team member Jazz Stocker-Witterick.

“I really enjoyed the experience,” she said. “I wanted to challenge myself to take on a hackathon on my own.”

When Sang emailed Jazz about another upcoming hackathon, Project Tech Conference, she thought it was a great opportunity to put into action an idea that had been on her backburner: to develop a program, Core Connect, that would bring people and organizations together to solve global problems by removing the language barrier to collaboration.

“I had been fleshing out the idea in my mind, even before the first Hackathon,” said Jazz. “I thought I would do it as an independent fun project for my ICS4U Science class.” The Grade 12 class includes many Grade 11 students, who are hoping to collaborate with Sang to take a Free University course next year.

“On Friday night, the organizers released a case study with a topic,” said Jazz. “We had until Sunday evening to submit a project. We were told in advance what the general idea was, so I was able to plan my project. But when I got the specific prompt on Friday night I had to tweak it to make it fit the prompt.” After that Jazz basically coded continuously for the rest of the weekend, 36 hours in total, stopping only to eat and sleep.

And yet she didn’t mind! “It’s something that I really enjoy, that I would like to go into as a career,” she said. “I didn’t even notice that the entire day had gone by!”

“I did a lot of planning so that I could be really efficient over the two days,” she continued. “Sang was so helpful throughout the process, especially the crucial planning stage.”

Sang also helped introduce Jazz to new branches of coding. “Coding is not linear,” Jazz explained. “It’s very expansive. Although the code I needed was at the same level as the work we had been doing in class, it was a different ‘stream’ so it was new to me.”

Solving the world’s problems through technology

What Jazz created involved a messaging system: a text/chat program that can be run through your browser. “The goal is to bridge language barriers that companies, organizations and even individuals face when they try to collaborate,” she said. “When you create an account you choose one of the six languages. You can send messages in your own language to another user, and the program detects the recipient's language and the messages are received in that language.”

Jazz confesses to a few tense moments. “The time constraint was challenging, and I worried I would have to drop an element of the program because I could only type so fast! In the end, I was able to make it fit — more or less.”

Jazz received her results in real-time, on the Sunday of the event, during an online meeting with the judges that took place during the event. Out of 100 entrants from across Canada, Jazz received an honourable mention and three interesting prizes. She is still making friends with her “very cool” subscription to Wolfram Alpha, a huge information database with lots of coding applications, which, she says, will be super useful for coding projects, math and science. She also received a subscription to Wolfram One, which gives access to their coding platform and online resources.

In addition, she has been awarded a three-month course to learn how to apply successfully for jobs in technology, and the opportunity to network with people in the industry from across North America. She has been invited to apply to become part of their volunteer group, alongside tech recruiters.

Once again, Sang is incredibly proud of his students’ achievements. “Not only have they achieved academically but they are demonstrating social justice activism through their work. They are breaking barriers, and they are programming with a purpose. They program not just for themselves but are coding as responsible global citizens who are becoming excellent role models for future computer science students who identify as girl or non-binary. Girls and non-binary students are underrepresented in technology, and they are breaking these barriers. I am so proud of them!”