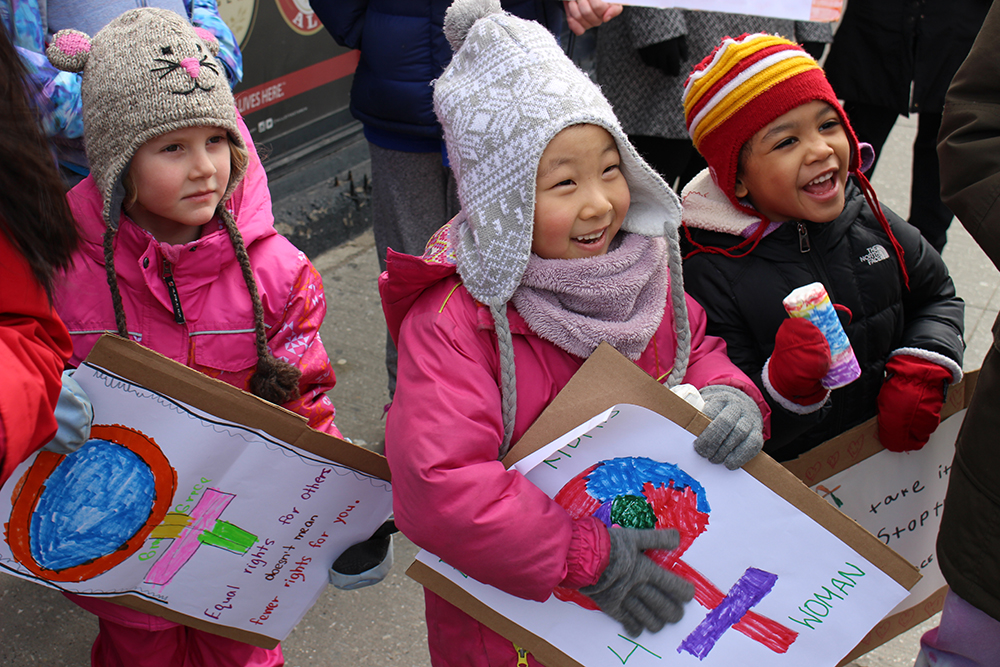 The week leading up to March Break was probably one of the busiest, but also calmest weeks that we have spent as a class together. We learned about equality and women's rights as we spoke about International Women's Day, dove into new information about underwater life before (and after) heading to Ripley's Aquarium of Canada, and even changed up our looks each day for Spirit Week. A highlight was definitely seeing all of the Lip-sync performances on Friday, and showing everyone our best moves on stage! Enjoy the photos of our learning journey. 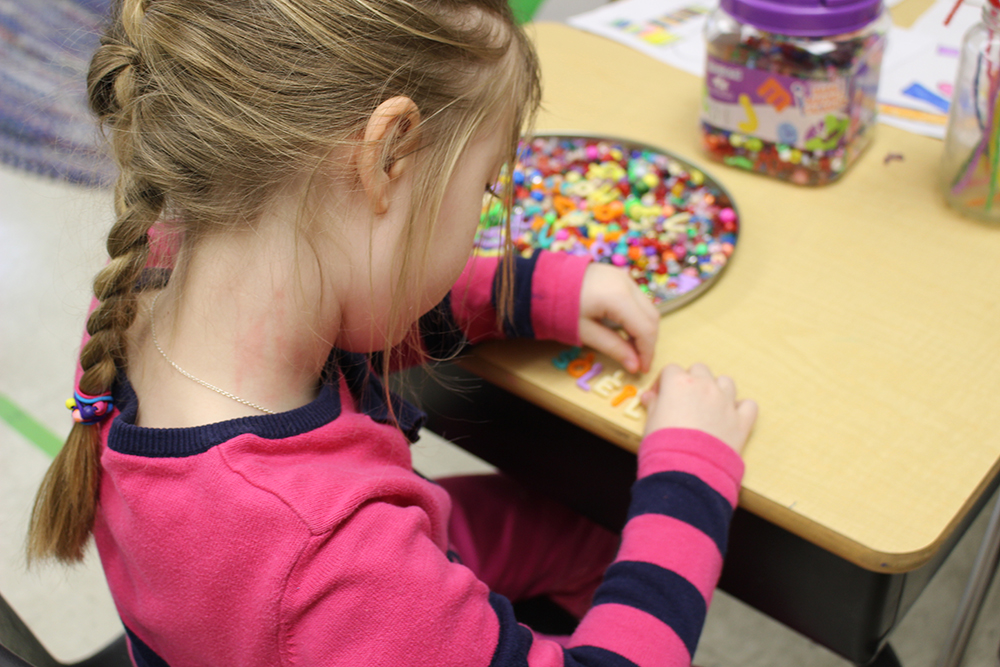 S picks out the letters in her name to use in her beaded necklace. What an authentic connection between art, letter recognition, fine motor skills, and creativity. 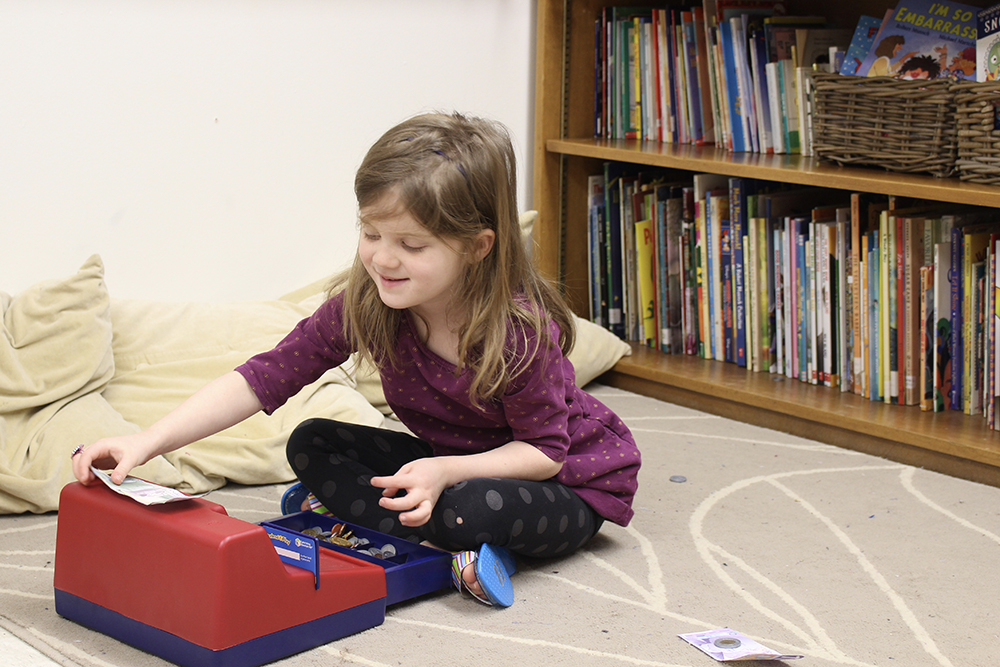 G counts out the money inside the cash register. She tells me that she is at work and making money, so she is having a pretty busy day. 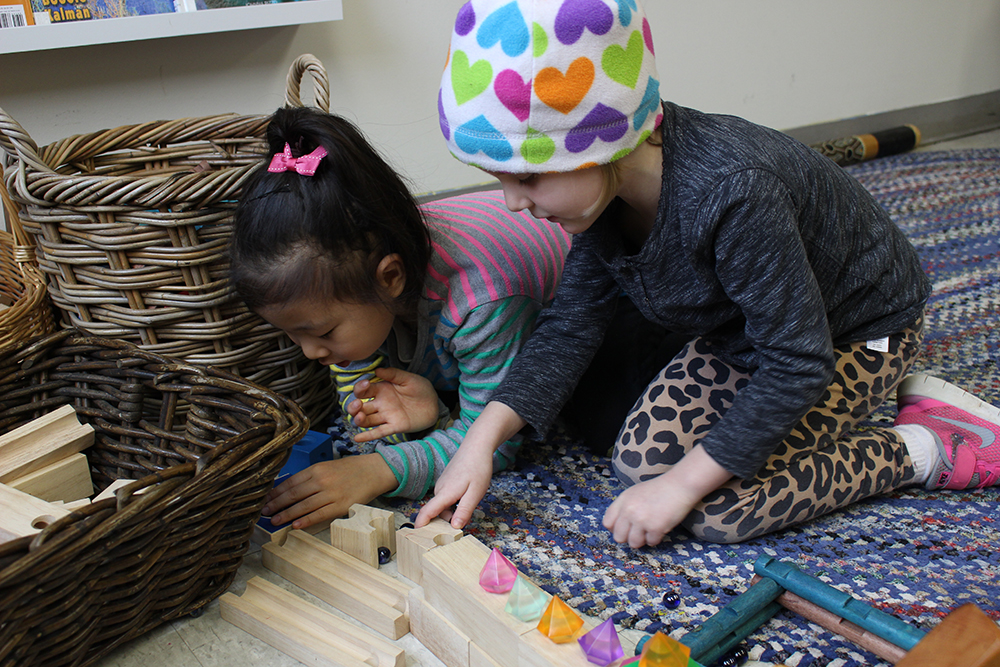 M and C collaborate in Building as they create a jewel-topped marble pathway. Their intriguing feature is the hidden marbles inside part of the pathway. 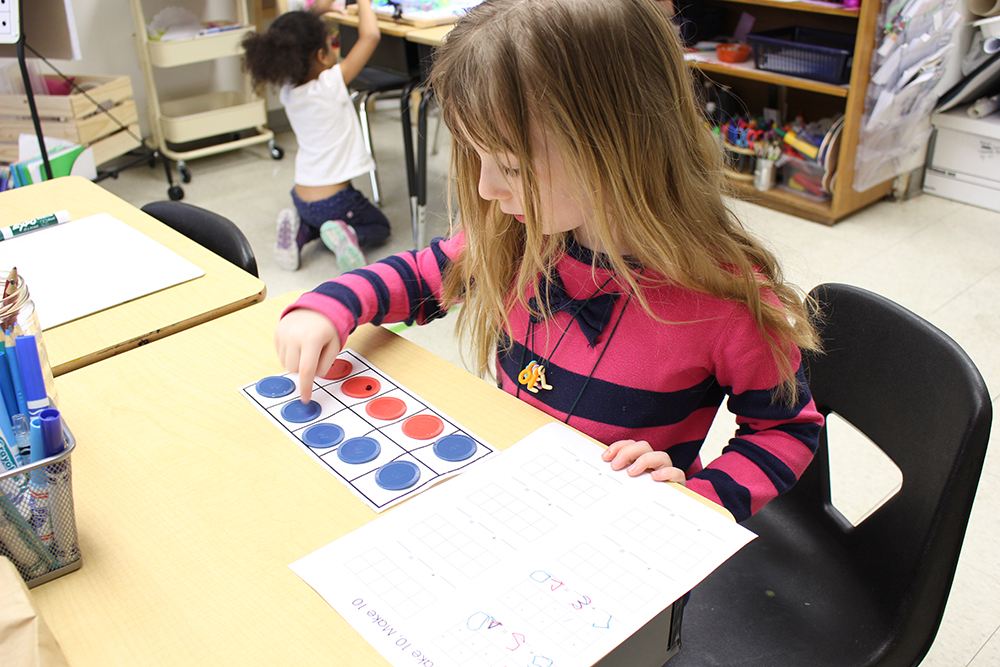 S spends some time at the Math Centre figuring out different combination of red and blue counters that make 10 in total. She uses the organizer to help her keep track of the combinations she has already come up with. 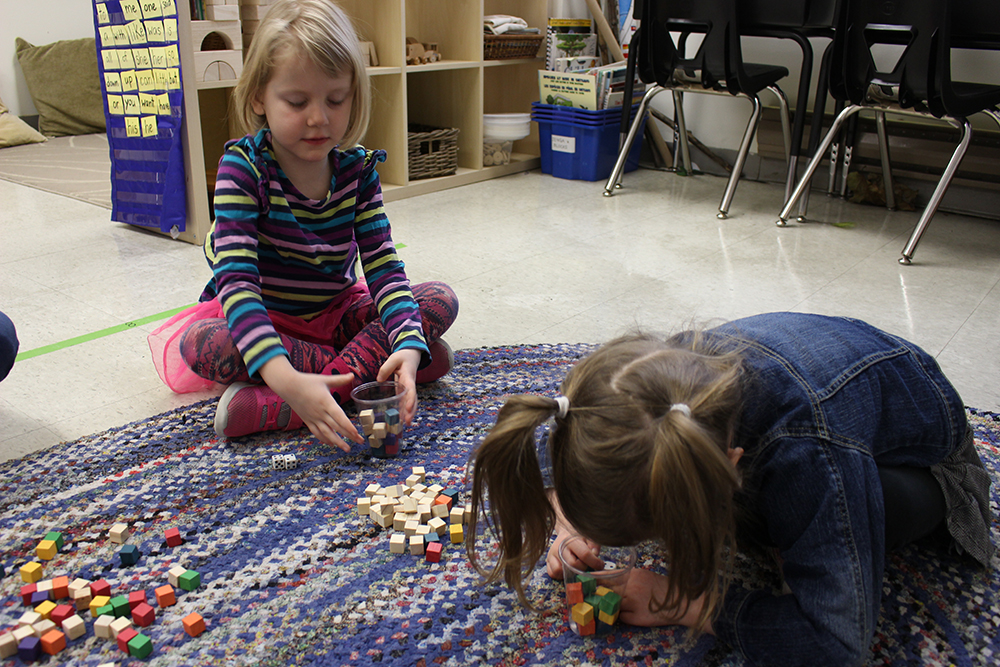 This morning we are playing an addition game called Fill Up the Cup. First, you roll two dice, then you add them up, and finally you put the total number of cubes in your cup. The goal of the game is to fill up your cup before starting again. 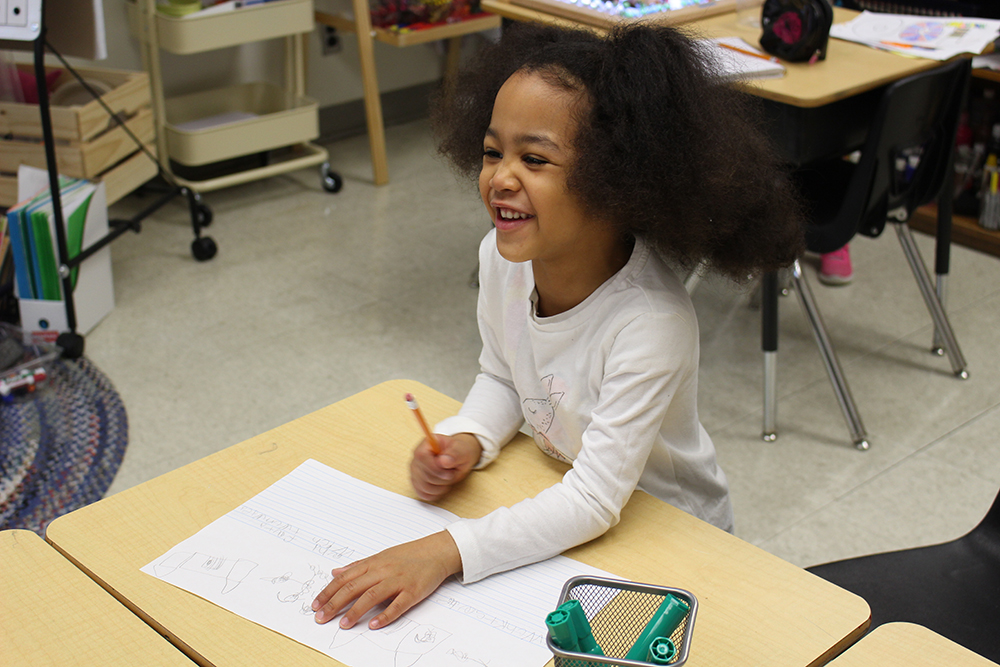 Z giggles as she writes a story at the Communication Centre. The plot line includes a queen, a witch, and a castle, and after adding the words on each page, she also adds pictures to help the reader understand her story. 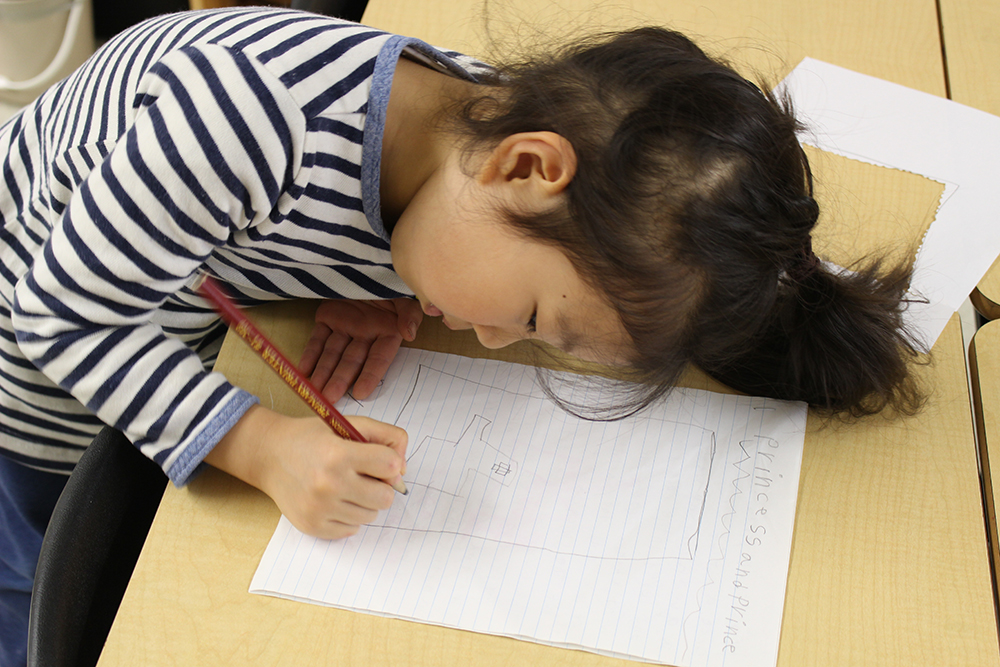 M is also writing a story at Communication, called "Princess and Prince". After writing a full page worth of text, she wanted to add on a cover page like she sees on most books we read. Here, she is drawing the castle that the Princess lives in. 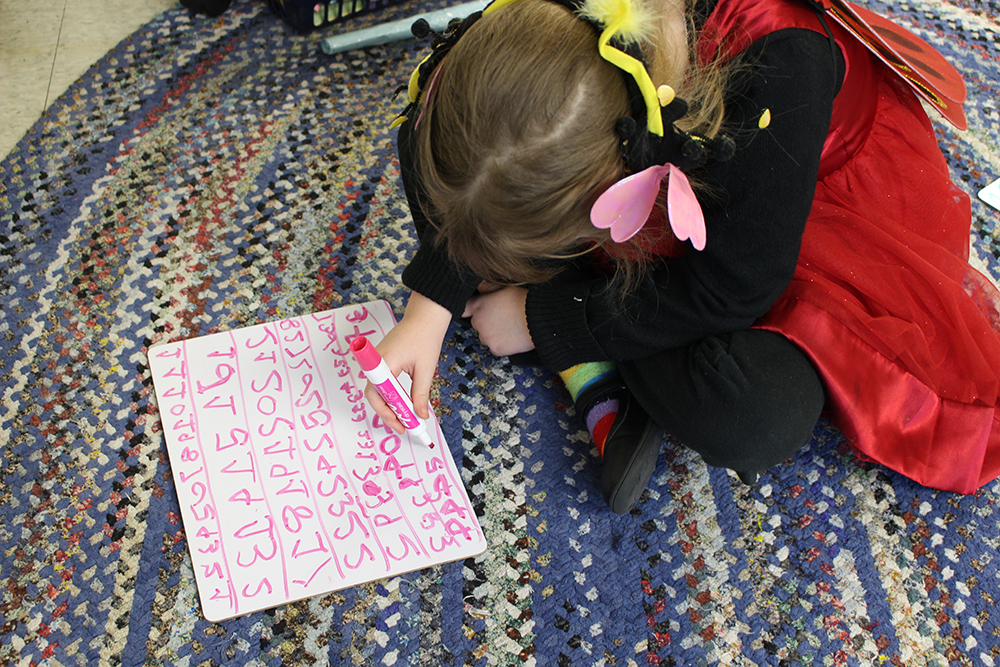 S takes time after finishing up in Writer's Workshop to write as many numbers as she can. Her dedication to her work, as well as number knowledge is very impressive. I loved watching her organize her work using lines to divide the rows of numbers. 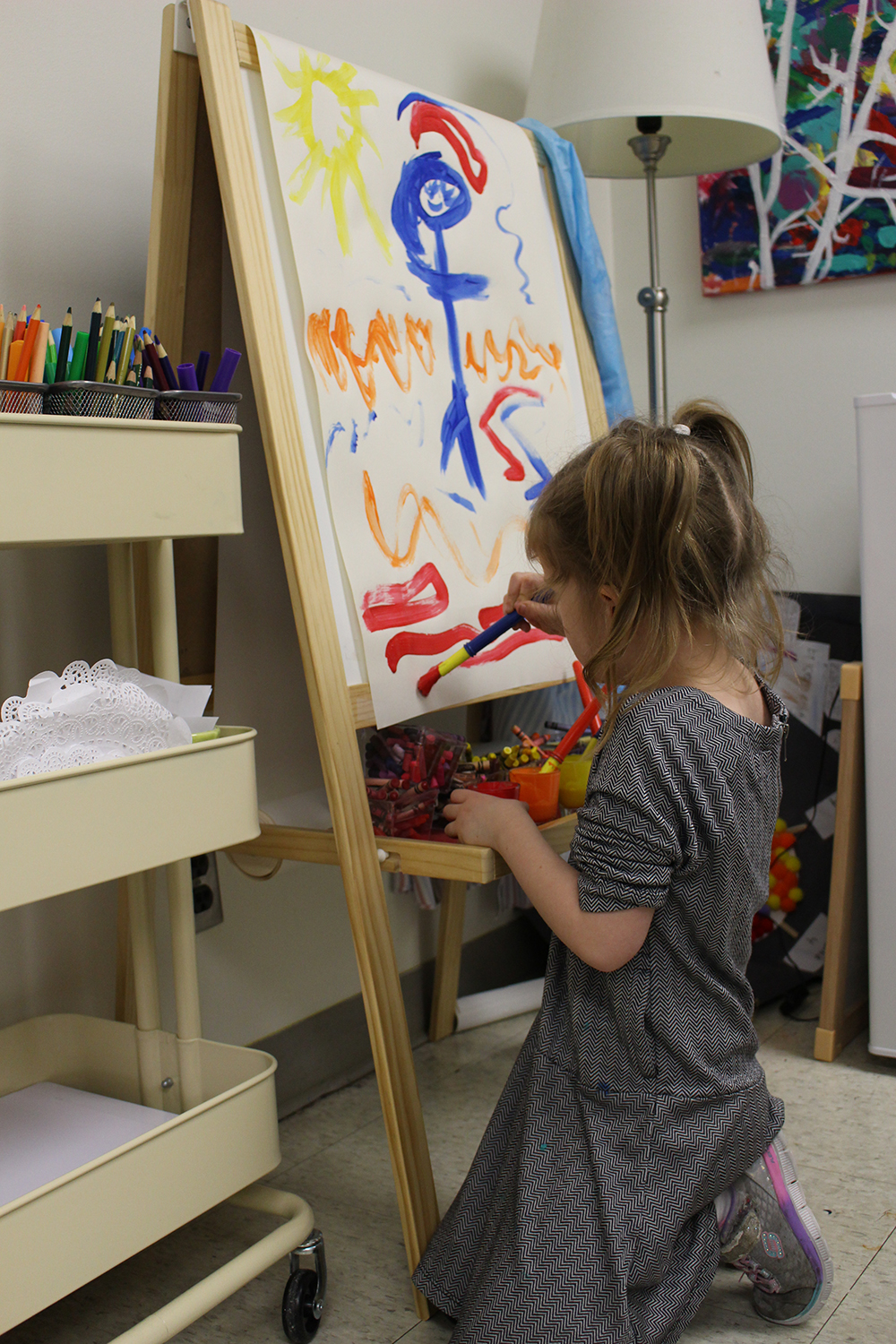 G changes up her stance as she adds the final touches on her painting. Sometimes it is important to get on a lower level when working on artwork. 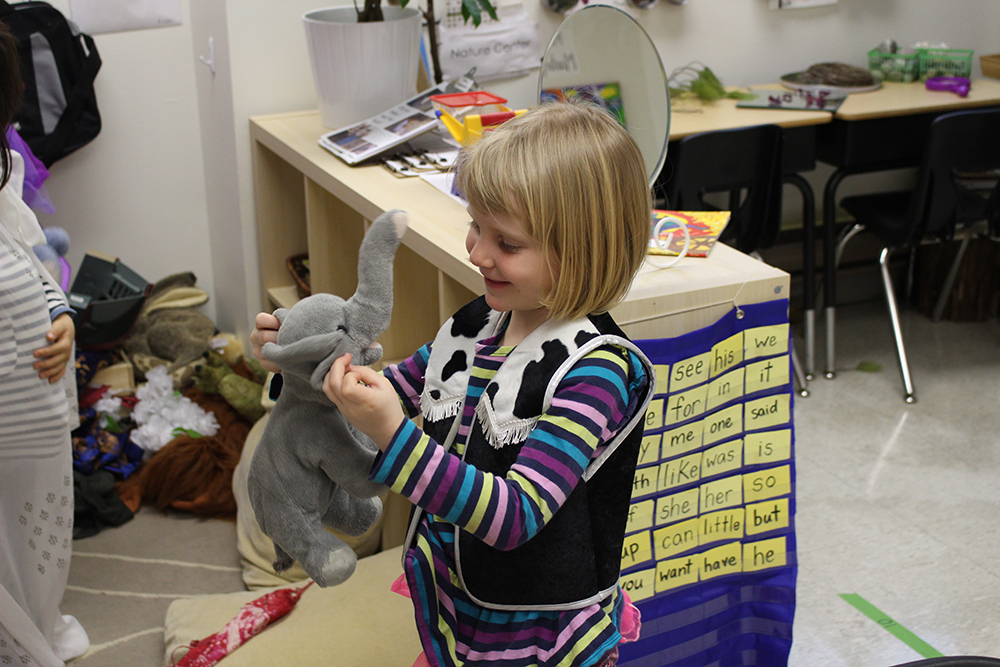 G is pretending that the elephant stuffy is her baby, and tells me that it was just born today. She is telling the baby how much she loves her. 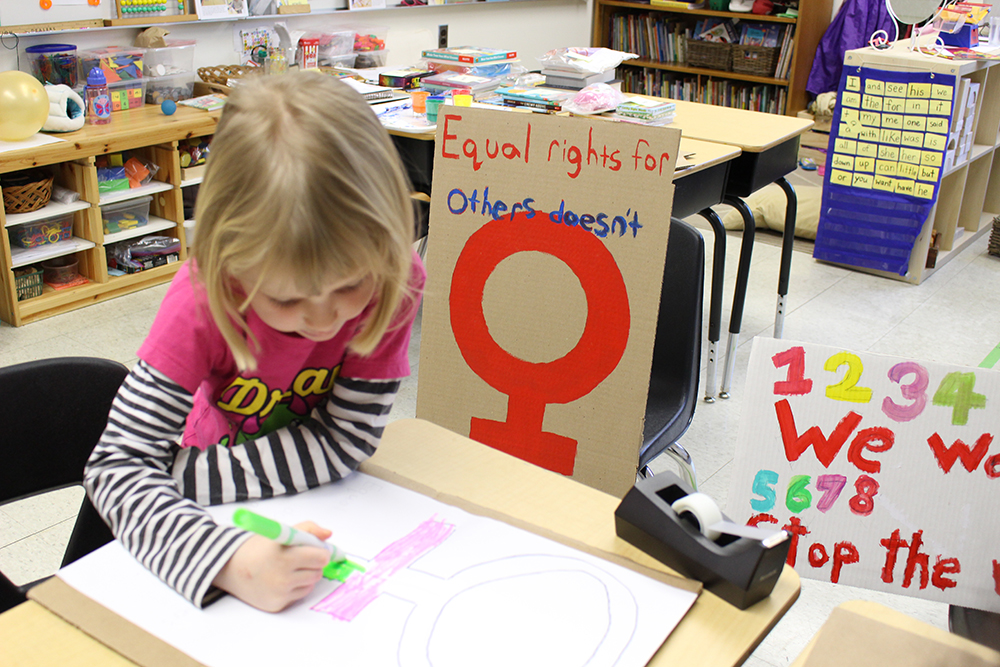 In preparation for Linden's International Women's Day march, we create individual signs to hold. G uses a sign that was made by an older Linden student to inspire the images and words that will be on her sign. 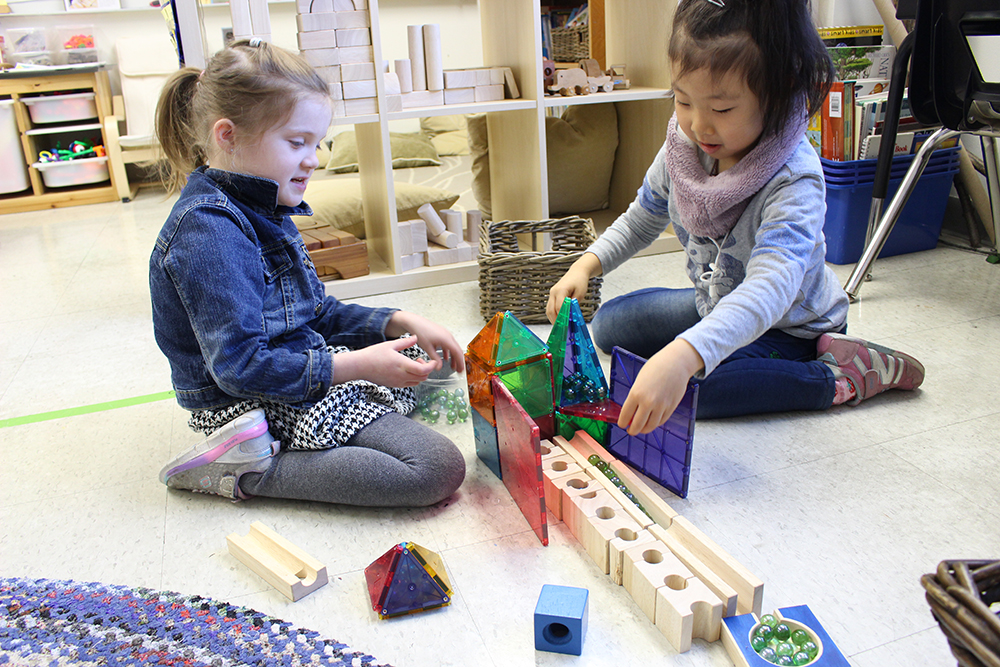 G and M work together in Building to create a multi-material structure. They explore the capacity of the pyramidal-shaped parts as they try to fill them with as many marbles as possible. They also add marbles into other nooks and down their ramp, ensuring they don't "run away". 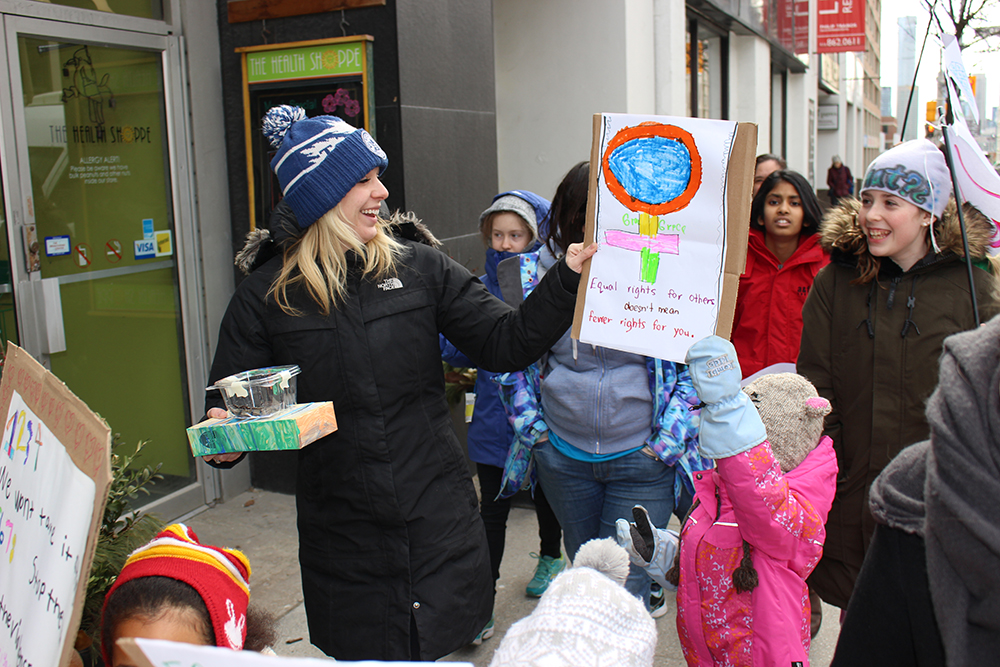 Brie and G march for IWD together, holding G's finished sign. As a group we chant, "1-2-3-4 we won't take it anymore, 5-6-7-8 stop the violence stop the hate", "my body my business", and "who's the boss of your body? I am!". By the end of the march the Early Learners were leading the chants and having everyone else join in! 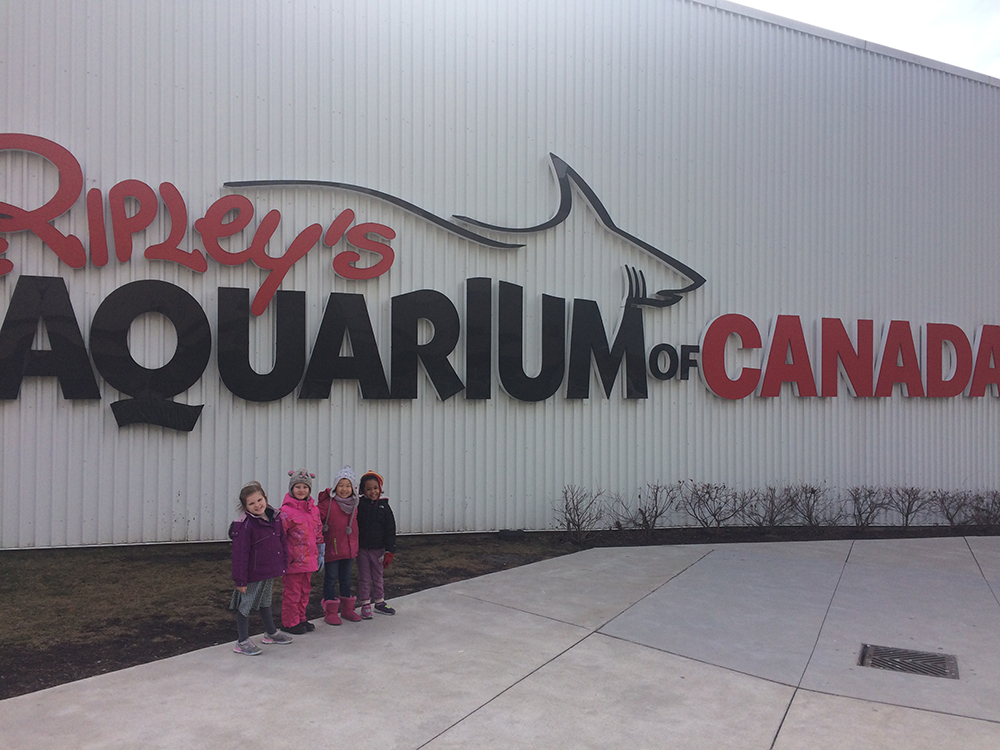 On the way to the aquarium for our field trip, the girls get more and more excited as they see the signs. Finally outside, they can barely contain their enthusiasm as we stop for a quick picture. We are looking forward to expanding our knowledge of how water is used and what underwater life is like. 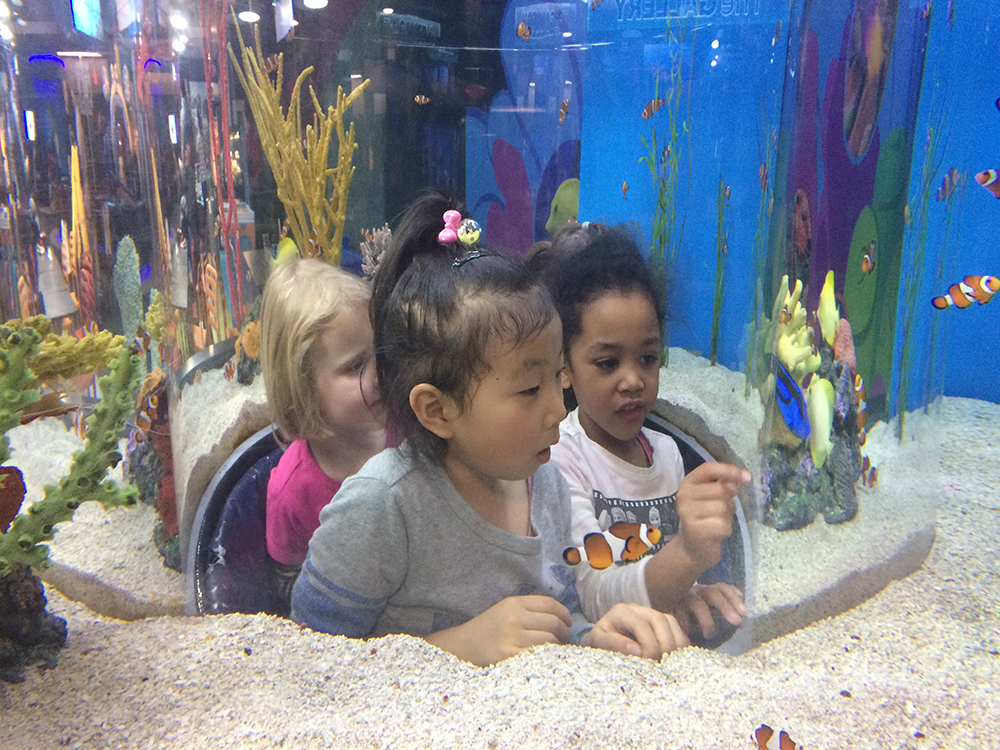 M, Z, and G are in awe of the fish that swim around them in this 360 degree aquarium. They notice that these fish look like "Nemos". 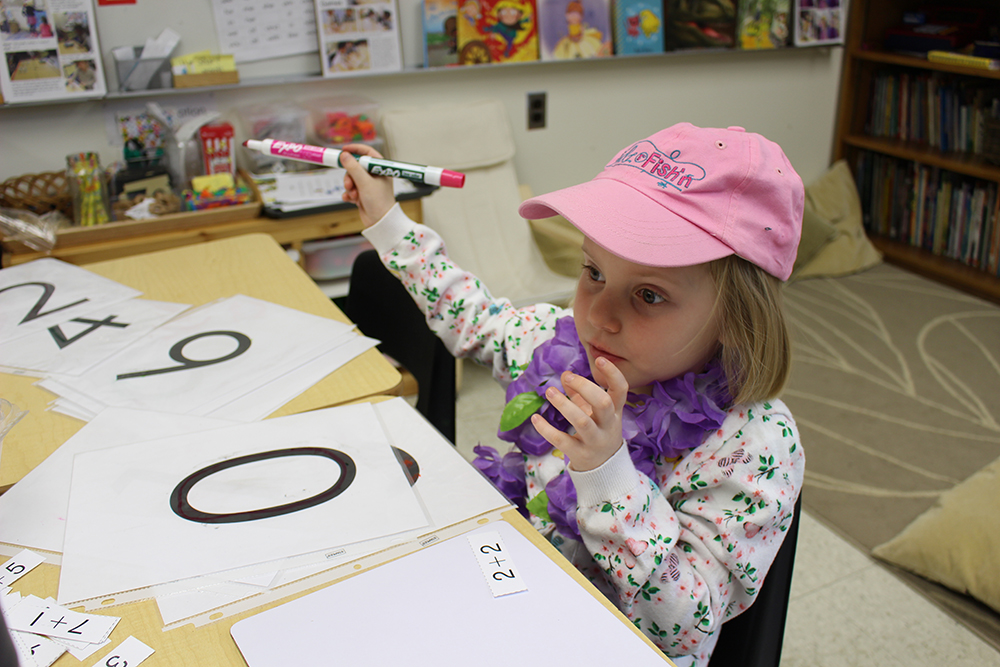 G suddenly takes a quick pause from practicing her writing control as she forms numbers to share a story that popped into her head. We are enjoying Beach Day at school today as well. 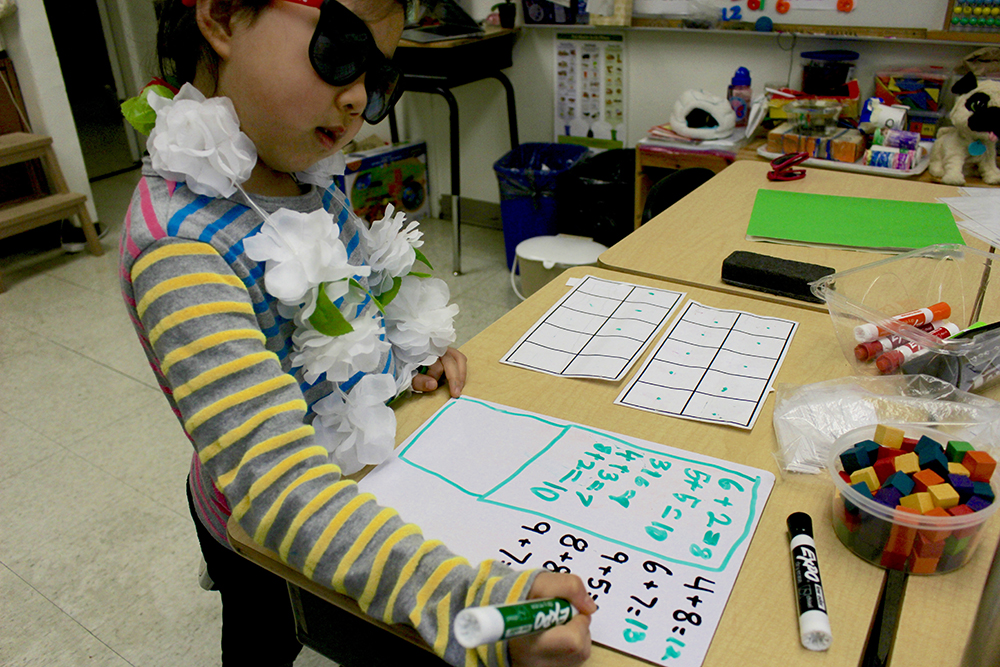 M is working on her addition for sums greater than 10 after she found problems that have sums less than 10 too easy. She is eager to work on doubles problem (i.e., 2+2) next, seeing the patterns that arise. 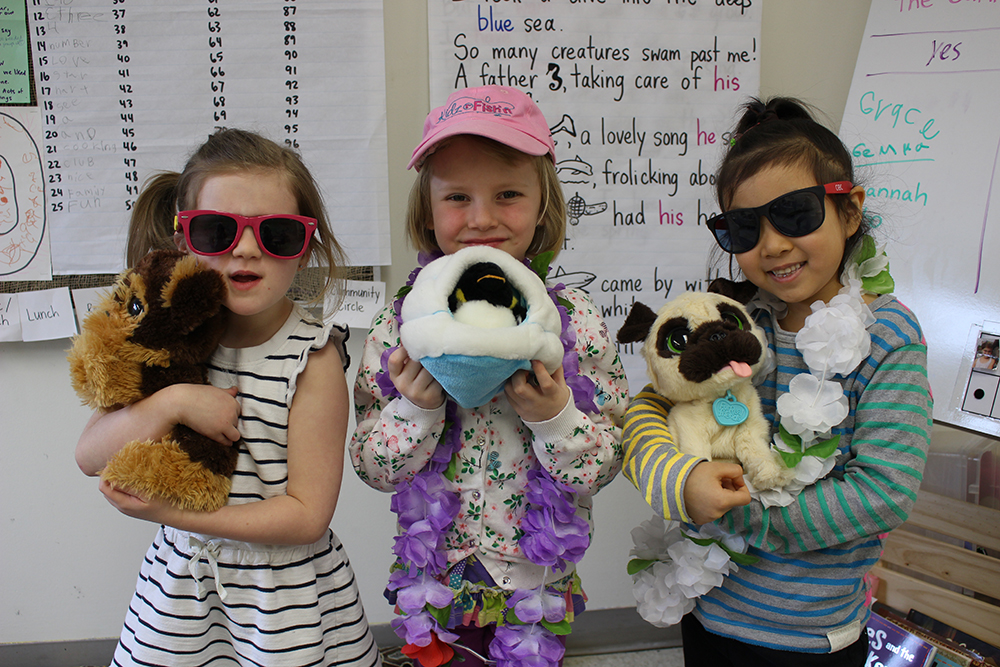 The beach girls have their stuffies ready for their picnic in French. The stuffies wanted to come out for Learning Centres and recess as well. 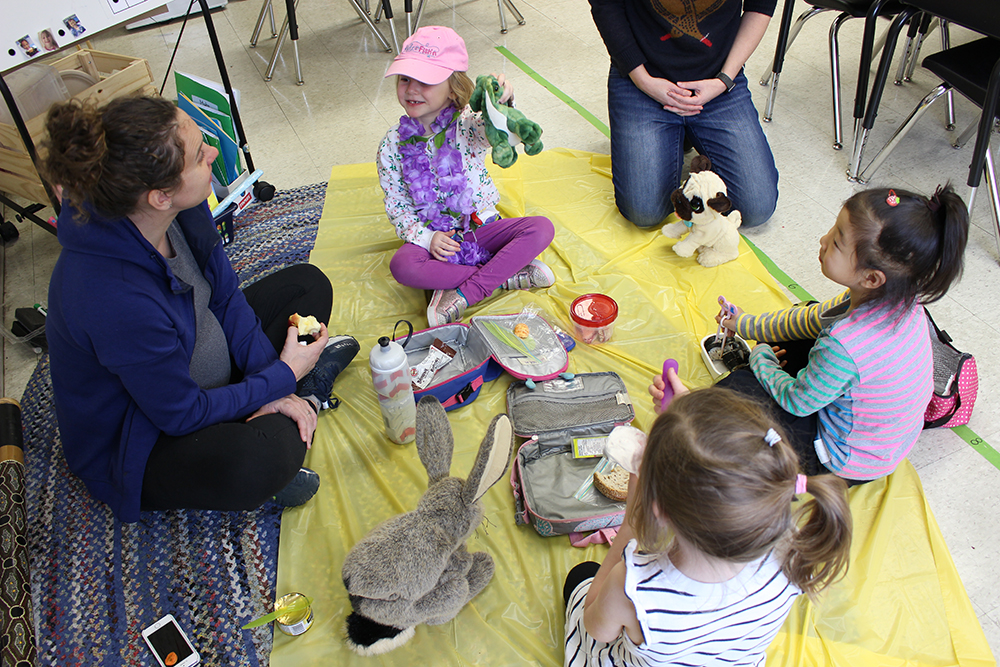 Time for the Teddybear picnic in French with Elizabeth. The girls discuss their lunches using their French vocabularies, and introduce their stuffy visitors to Elizabeth. 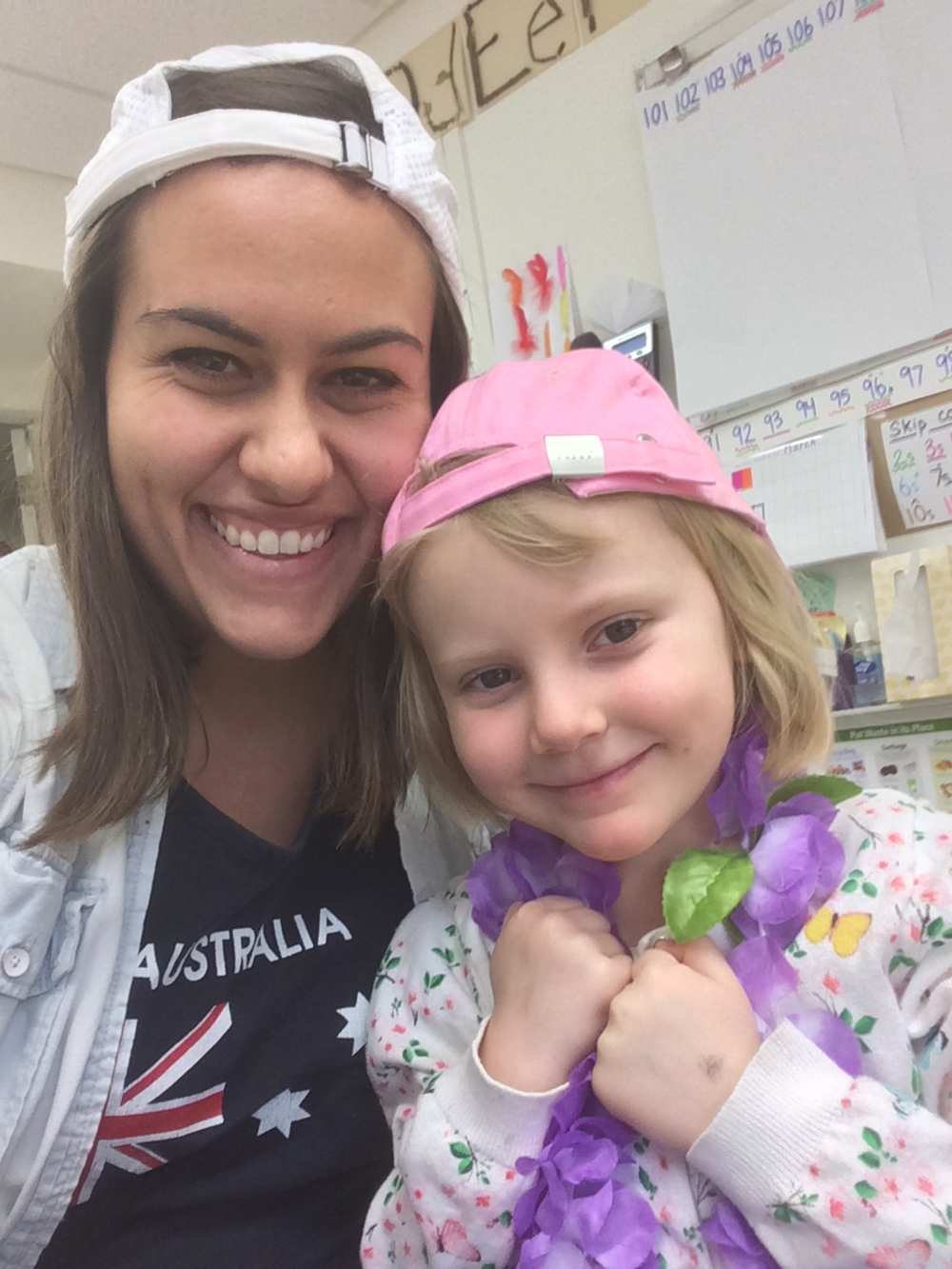 Excited to have a beach buddy today! Happy March Break!