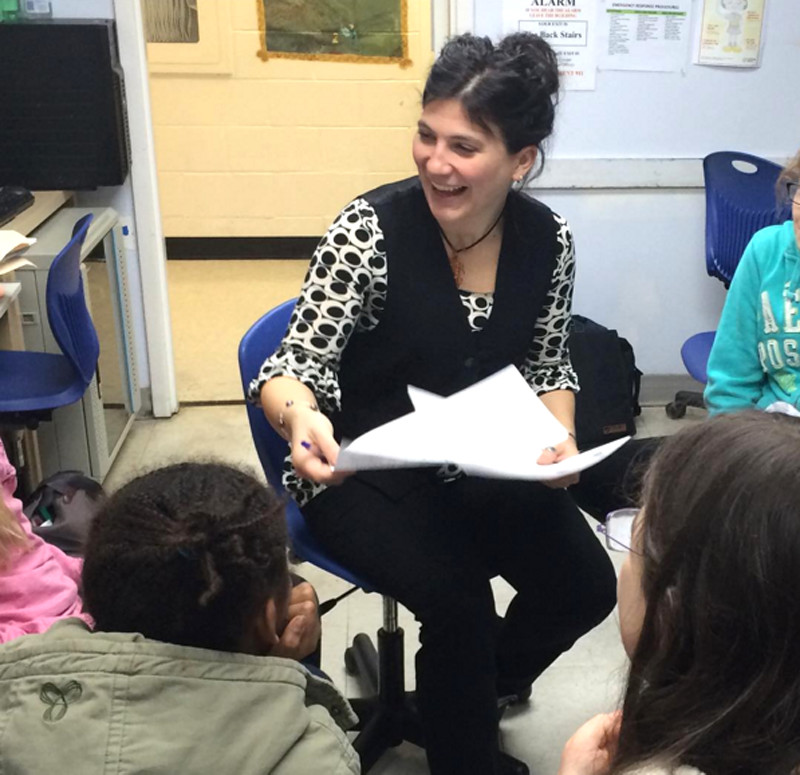 My name is Renee Jackson and I am a PhD candidate at Concordia University. I was the art teacher at The Linden School from 2004-2007. I loved working here very much, which is what brought me back to conduct video game-based research.

I initially worked with the Grade 8 class two years ago when they were in Grade 6. We were looking at a social justice game called Get Water! at the time. From this project, I learned that the girls had a lot to say about how they would change and build on the game. Taking inspiration from this finding, I worked with Angelique Mannella, CEO of the small start-up gaming company that made Get Water! to build a game with the same group of girls (now in Grade 7) called Arcade Our Way. The plan from the beginning was to build a game about leadership, with a focus on leadership in relation to girls aged 11-13. What better place to turn for advice on this topic than Linden girls of this very age! The Linden School students were partnered with undergraduate students, first Layla Belmahi (McGill University) and Lila Weintraub (Concordia University), who were then joined by Marysa Antonakakis (Concordia) and Clairine Shum (Concordia), who developed art concepts for the game. Liane Decary-Chen and Marysa then partnered up to finish the prototype over the summer, after looking through all of the ideas passed along from the girls, now in Grade 8 (time flies!).

The result is Ghost Hotel, a series of mini-games about a ghost named Violet who works for a bit of a tyrant, and is tasked with overcoming assumptions that are made about girls, and winning over other ghosts in the hotel by building respect through her actions. Eventually the ghosts just may clean up the hotel and take it right over! Currently the game is a prototype that includes 2 mini-games, and the idea now is to invite girls from many contexts to play, share their opinions, and add more mini-game concepts. Today was my third and final visit with the (now) Grade 8 class at Linden, and I shared the prototype with them for the first time. It wasn’t really possible to keep in touch with them over the summer, so without regular consultation, I was worried about what they would think of the final version of the prototype. We wrapped up today with a focus group format, and it seems they approve unanimously, and they are impressed by the fact that the game teaches/will teach further important mini-lessons about being a leader, without being too obvious or in your face. The group thinks it is important that the game was developed by actually talking to the people for whom it was made. They expressed that in general they think many types of products would be much more successful if ideas were discussed directly in this way. They thought it was great to have the opportunity to pull together their ideas, and that these ideas actually amounted to a real game. Thank you Grade 8 students. I have learned a lot from you, and hope that you will keep track of the project over time, and download the prototype.

With help from Linden’s Grade 6 teacher, Beth, I also launched a mini-research project with the Grade 6 girls. They played two games for social change that take place in rural settings in the Global South. The first game, Get Water!, is an endless runner game about a girl named Maya who misses out on school because she has to get water for her family. The second game, Ayiti: The Cost of Life, is about a family in Haiti, and as the player you have to make decisions about what to spend money on, and who to send to work and school, and then watch what happens in the life of the family through four seasons. Findings from this study will be published as a chapter in a book initiated by Dr. Claudia Mitchell at McGill University, with the working title Visual Encounters in the Study of Rural Childhoods. Through this focus group with the Grade 6 students at Linden, video games were used to elicit perceptions of the rural in the Global South through the eyes of 11-year-old girls who live in urban settings in the Global North.

The Linden School thanks Renee Jackson for including our students in her research and we look forward to collaborating with her in the future.