December 6: A Memorial and Rally against Gender-Based Violence 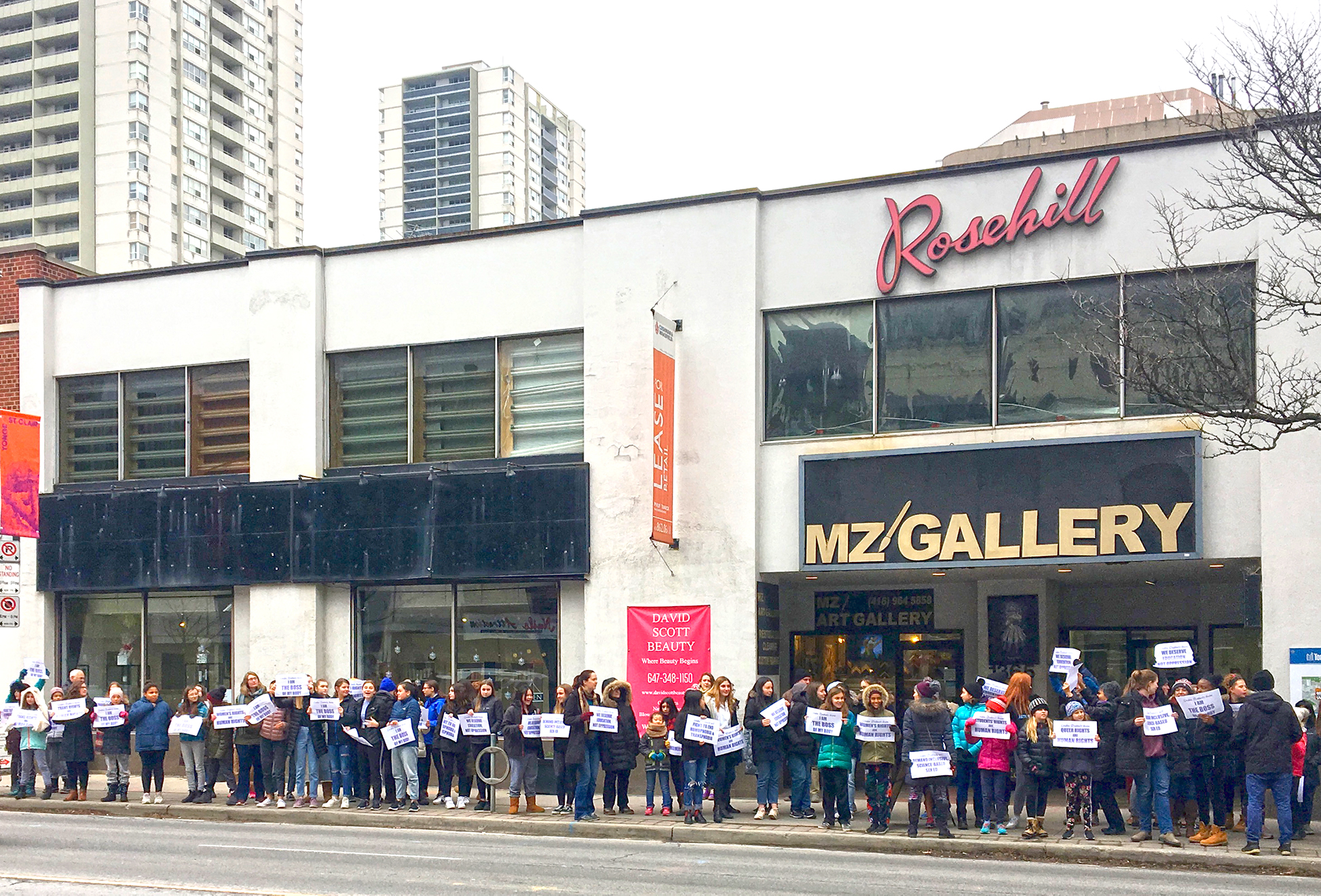 Linden students raising their voices on Yonge Street to commemorate the National Day of Remembrance and Action on Violence against Women.

Being a part of the Linden community means we have so many reasons to celebrate, every day; celebrating each other, our accomplishments, and our strengths. However, Linden was built because of a need for action and a desire to create change. While we acknowledge the ever-improving status of women in our society, Linden girls know that there is still so much to fight for.

At our All-School assembly on Thursday, December 6th, the senior French students led Linden in a ceremony to honour the 14 victims of the 1989 École Polytechnique massacre. These students, training to be engineers, were separated from their male peers and killed specifically because they were women. The Grade 11s and 12s presented some research they had done on the massacre and on the status of gender-based violence today, and the Grade 9s solemnly read the names of each of the 14 victims.

Our students are aware that, even though feminism is much more accepted now, we still have a long way to go before all women are given the same safety and opportunities. On Thursday, they shared that Indigenous women in Canada are more likely to be the victims of abuse both from people known to them and from strangers. Trans women and gender-non-conforming people are more likely than cis women to experience harassment. Women with cognitive or physical impairments are at great risk as well. While some facets of our identities may put us at risk of violence, other facets may protect us.

The Canadian government has designated December 6th the “National Day of Remembrance and Action on Violence against Women,” and following our act of Remembrance, Linden girls took their Action to the streets, rallying to raise awareness of all forms of gender-based violence. Students who did not wish to participate in the outdoor rally gathered in the CERES lab to write letters to their MPPs, urging them to fight gender-based violence through their work in Parliament.

Linden is where girls find their voice, and Thursday’s rally and memorial were opportunities for them to use that voice loudly.

See below for some highlights of Thursday’s All-School, organised by Coco and the senior French students. 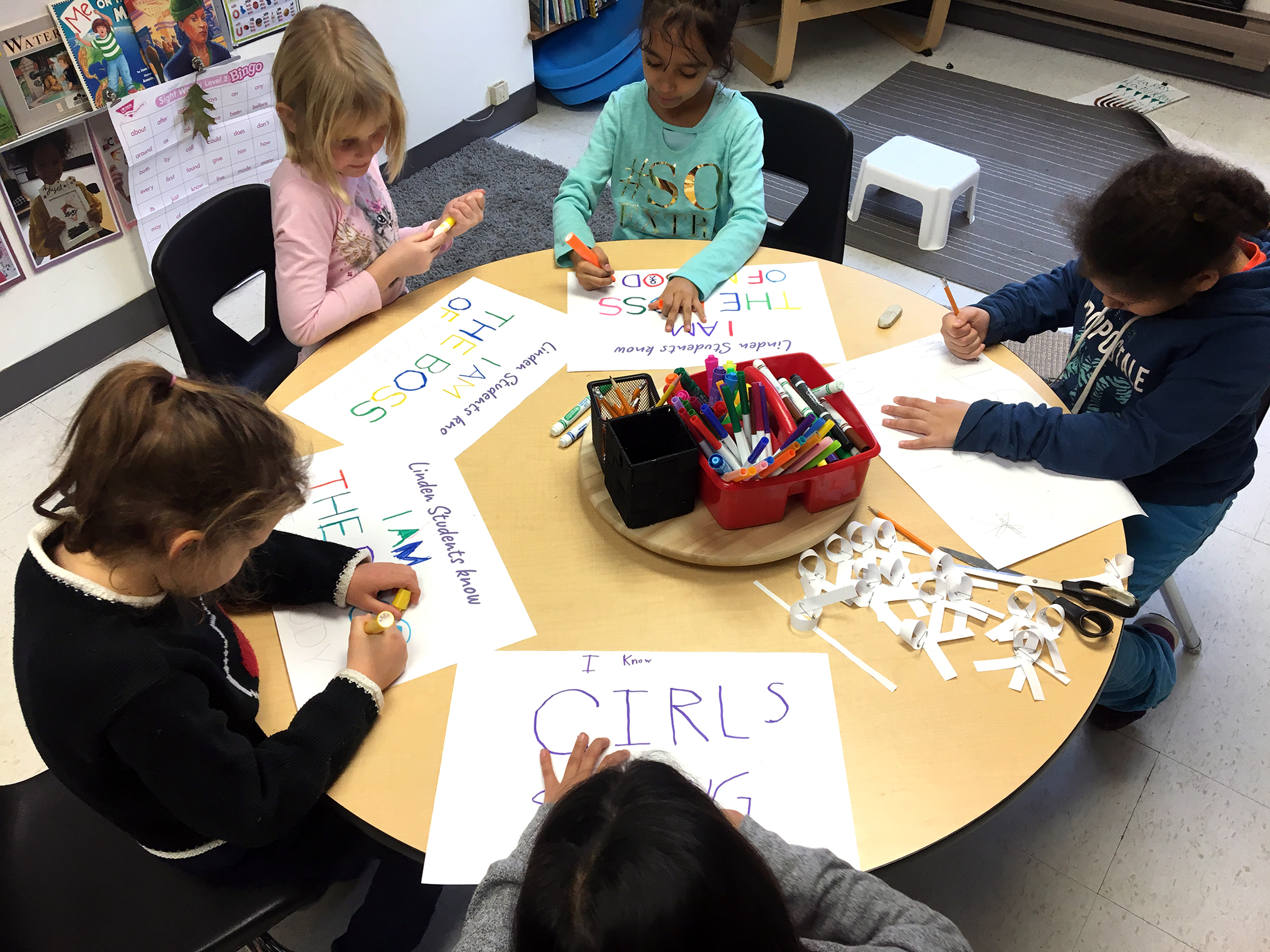 Tonja and Savannah's students took extra time in the morning to make their signs and understand why we were rallying. 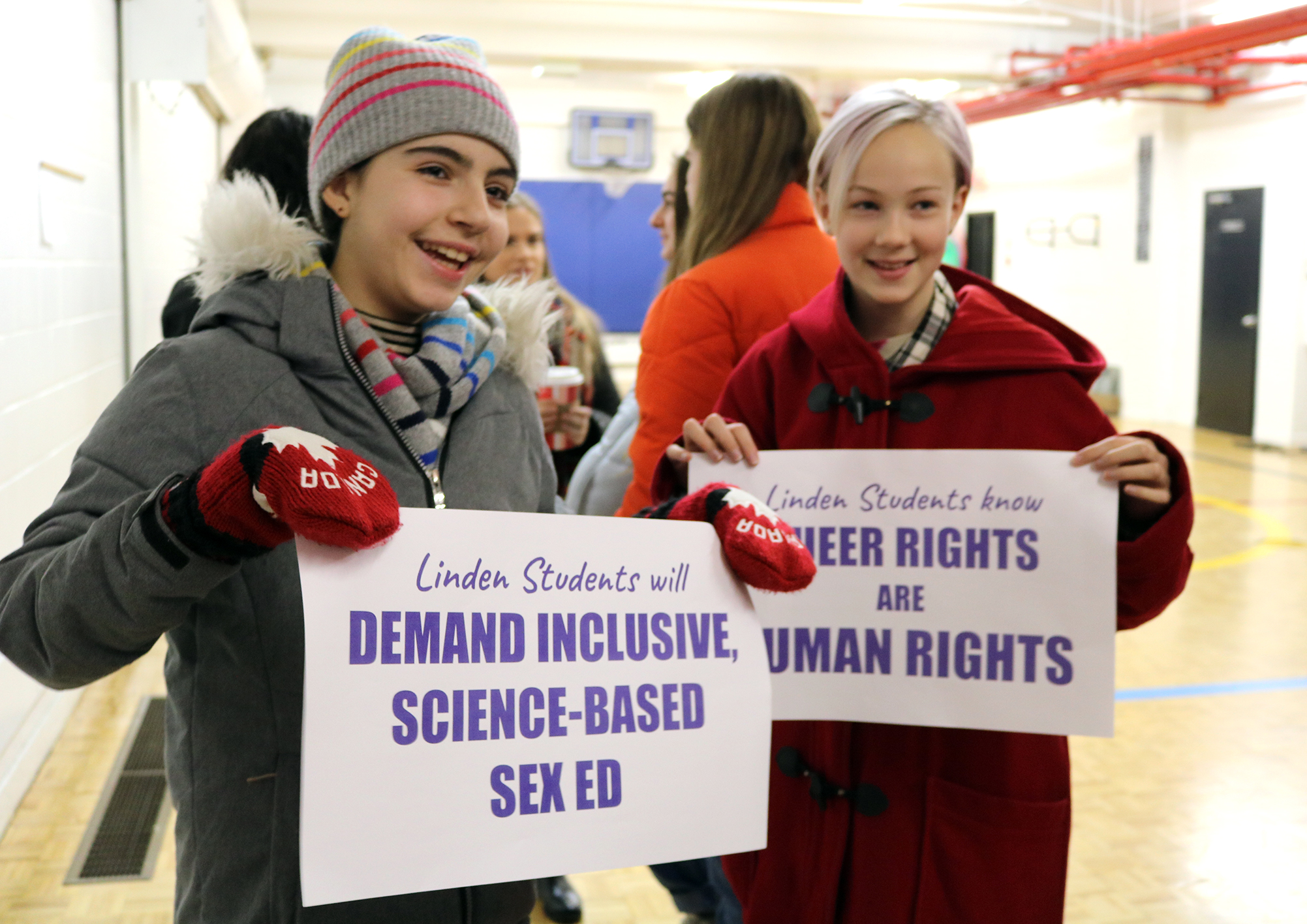 Linden students show off their sign choices before heading outside. 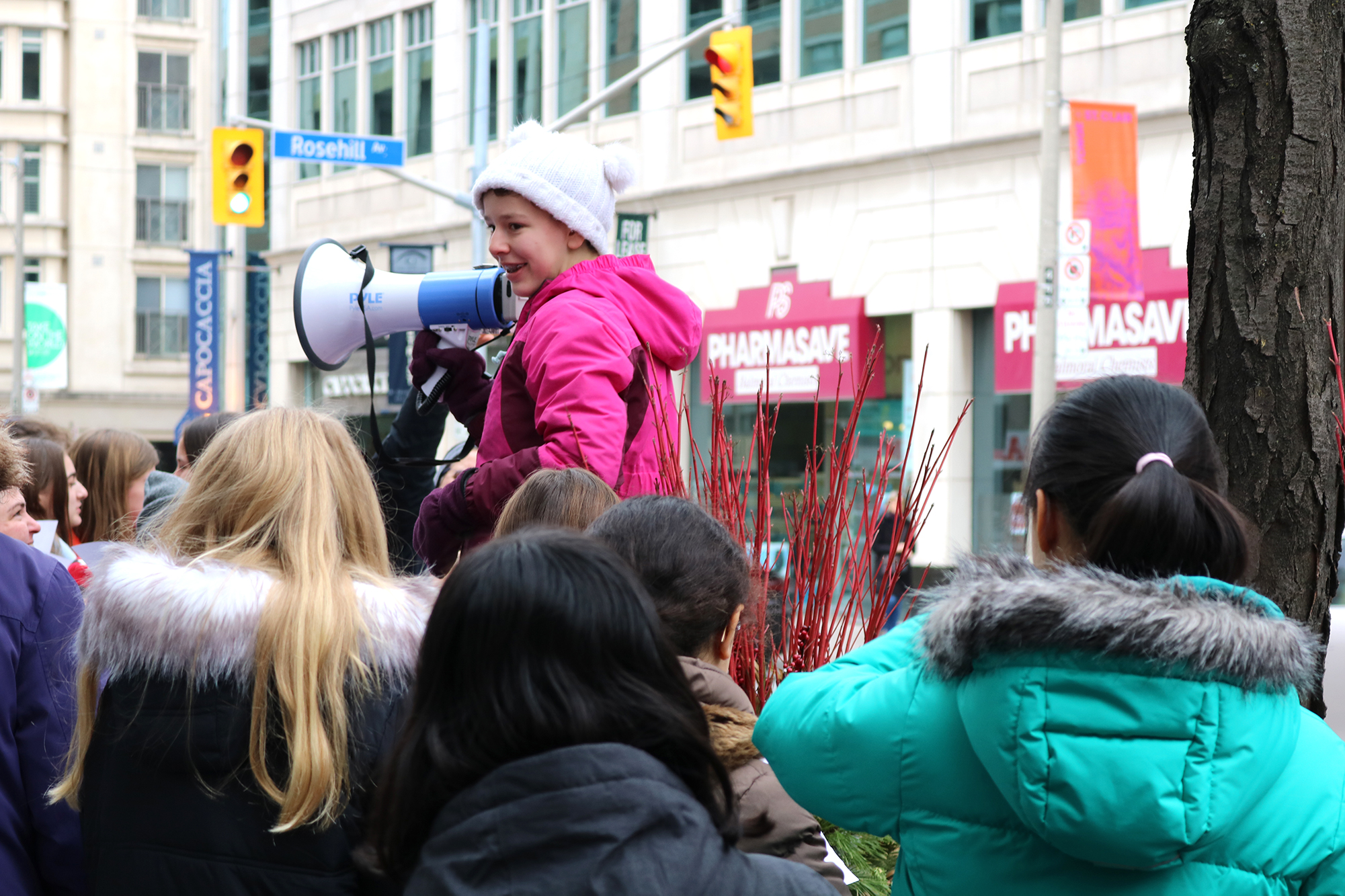 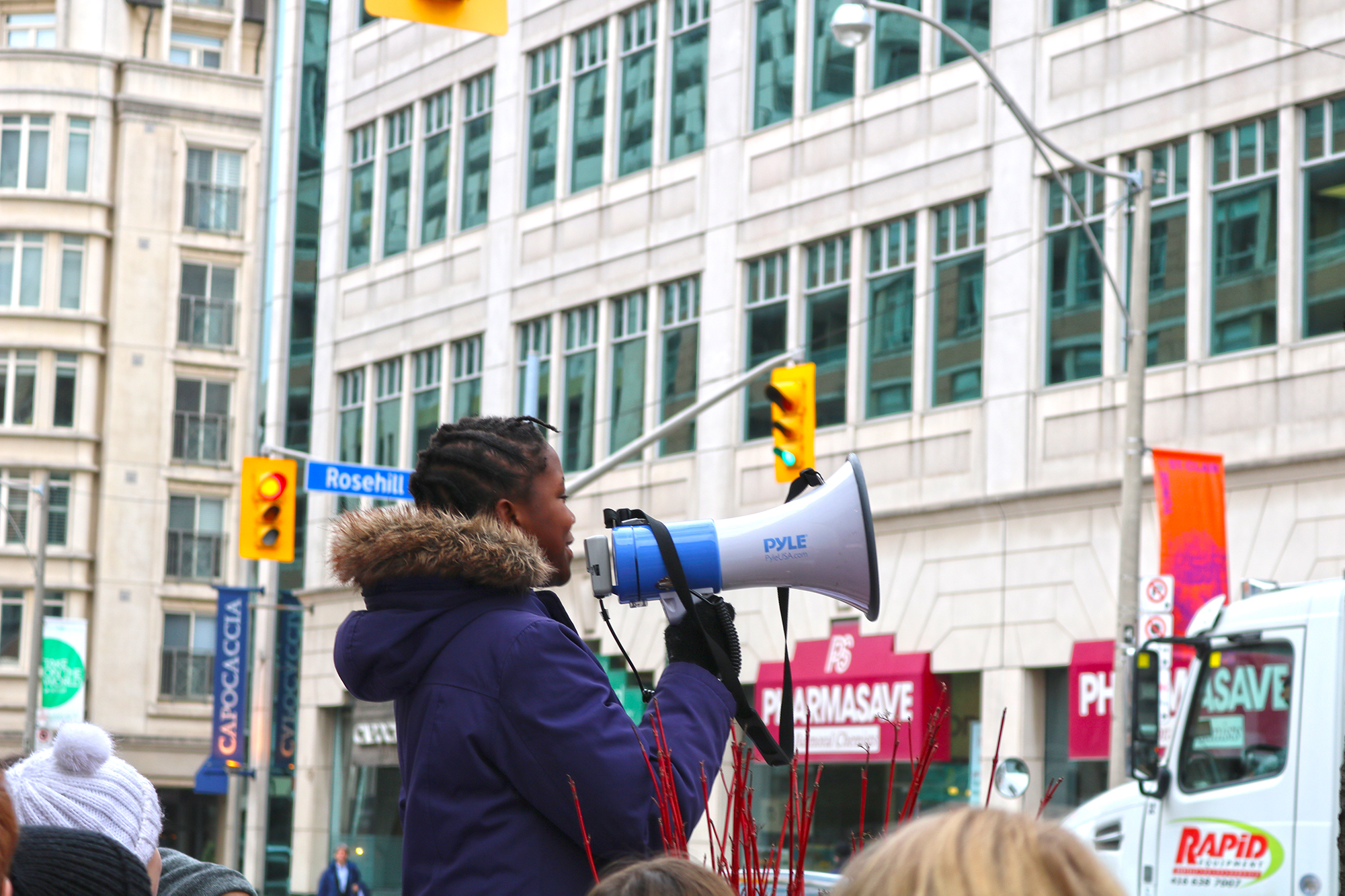 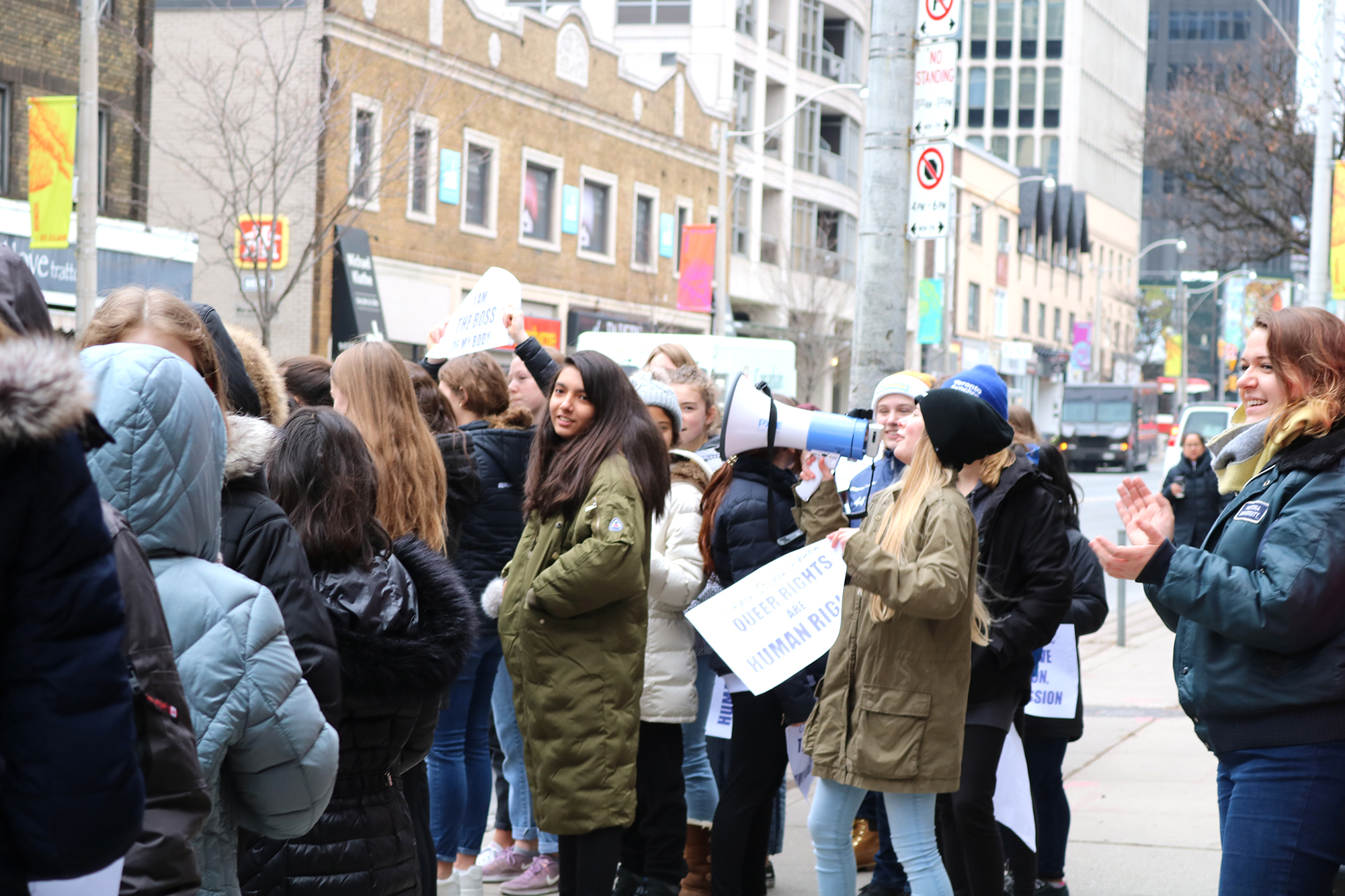 Evy brings the party to the protest. 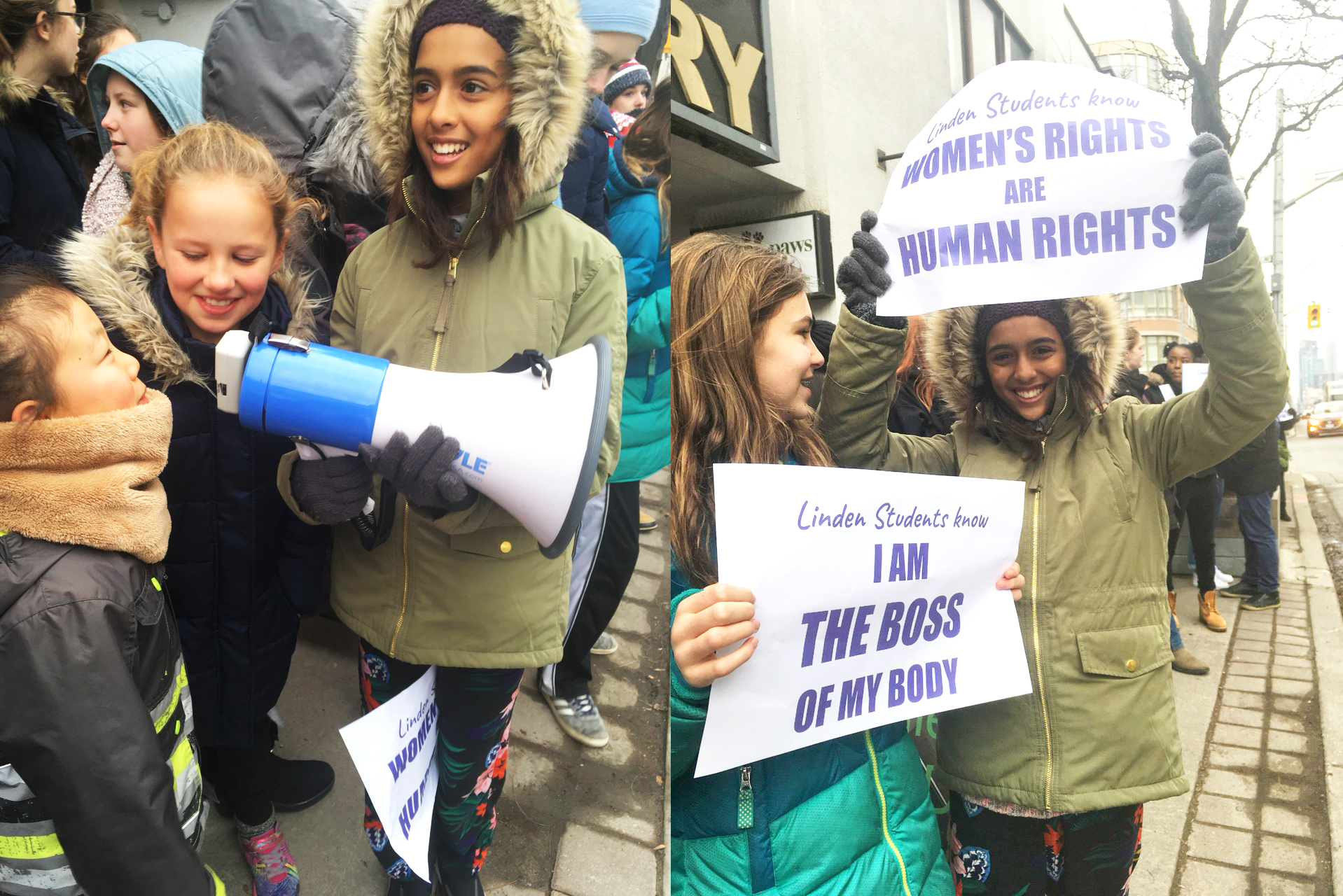 Girls being heard loud and clear! 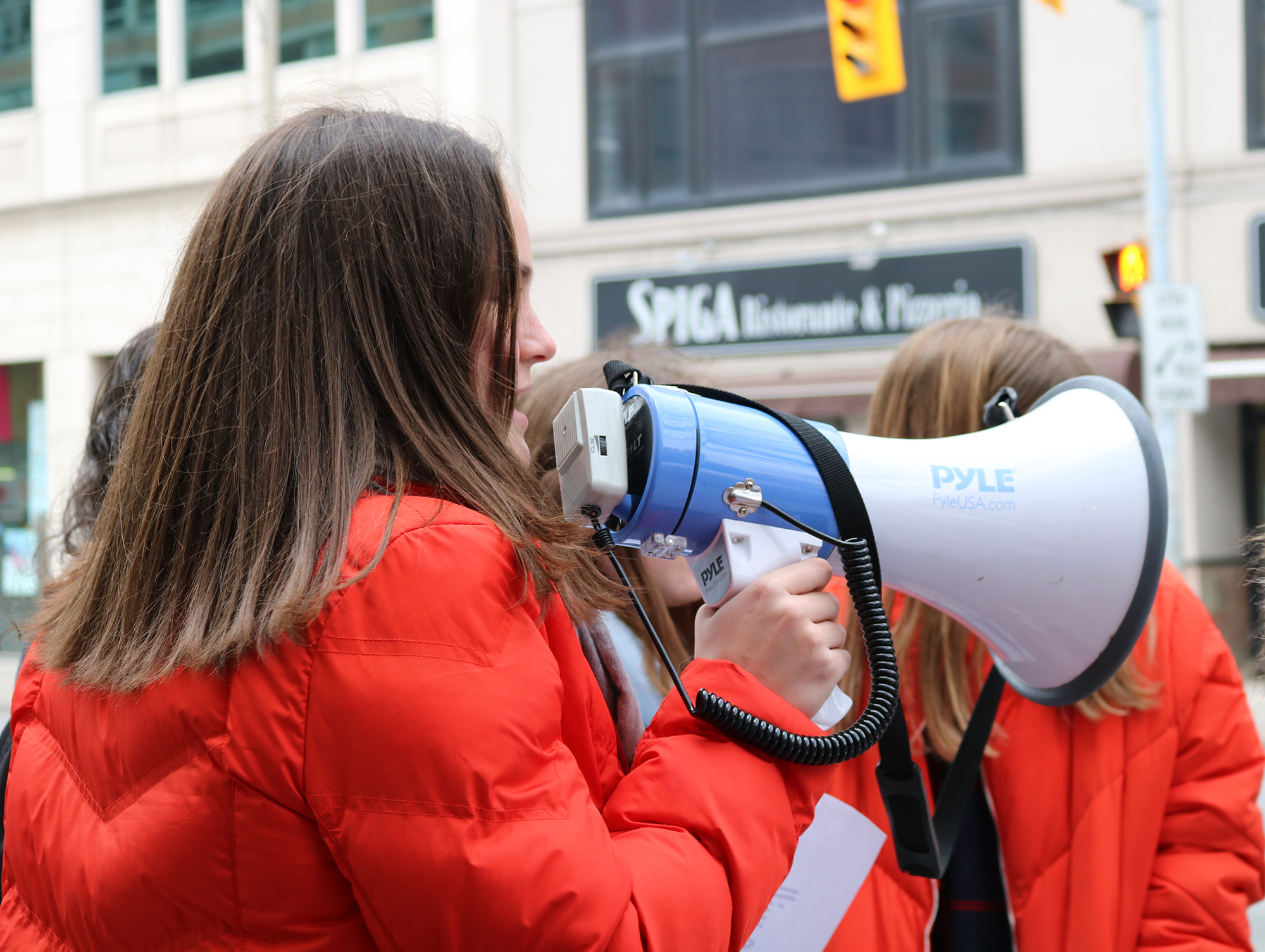 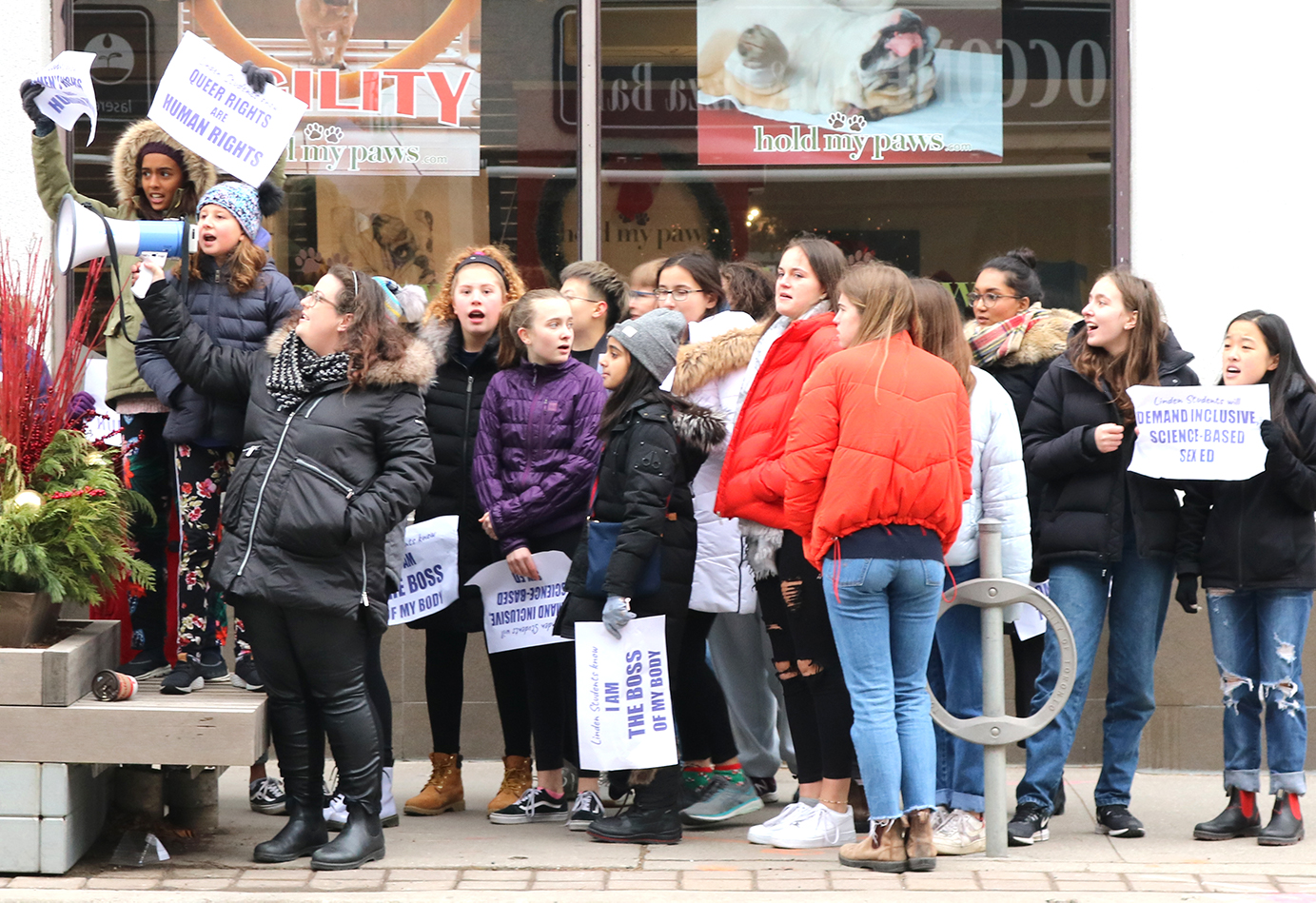 Sofia and Jiya leading the charge. Kristy, like all Linden teachers, is always looking to amplify her students' voices. 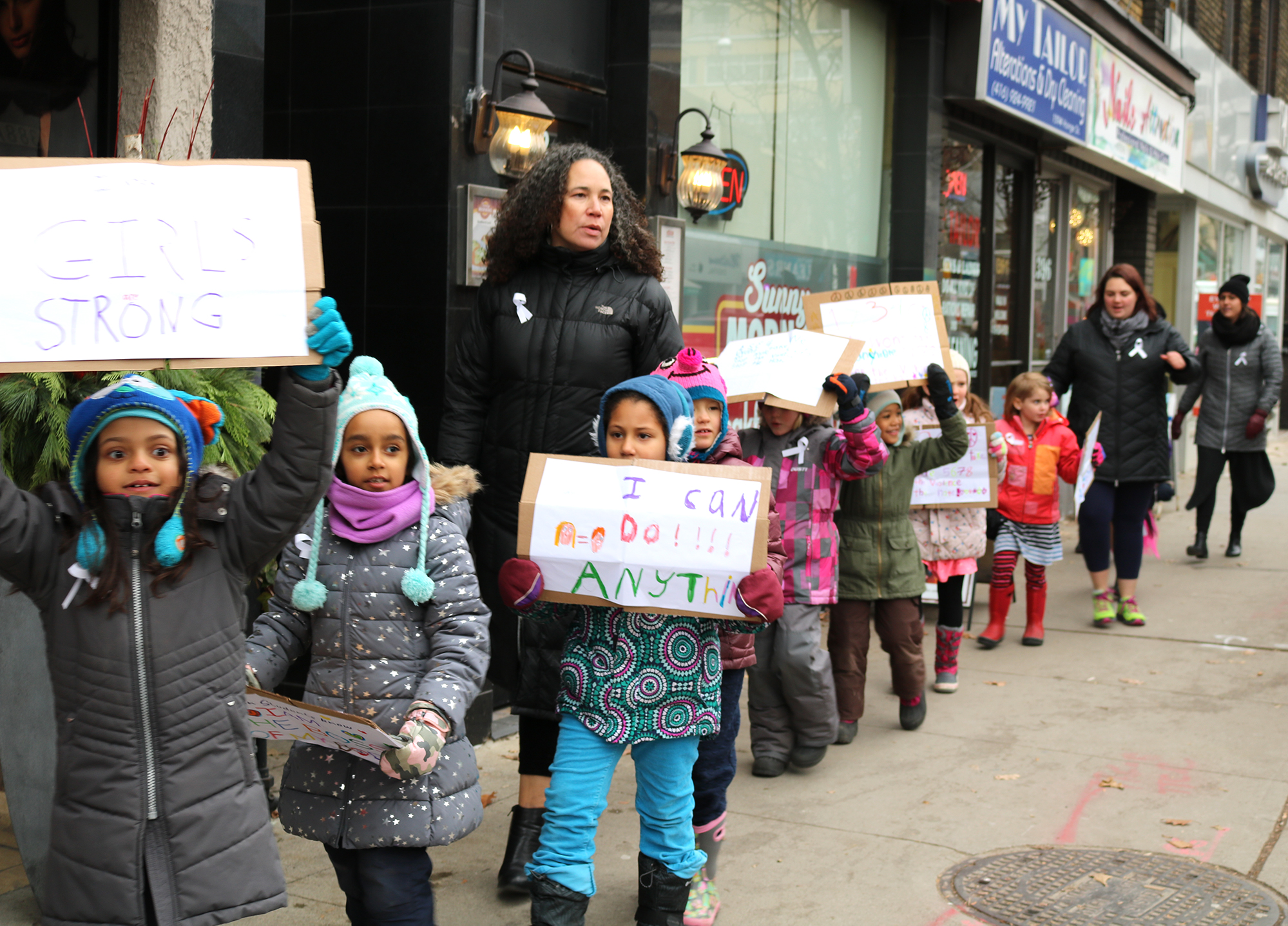 The early learners led a march around the block to keep warm and spread the word. 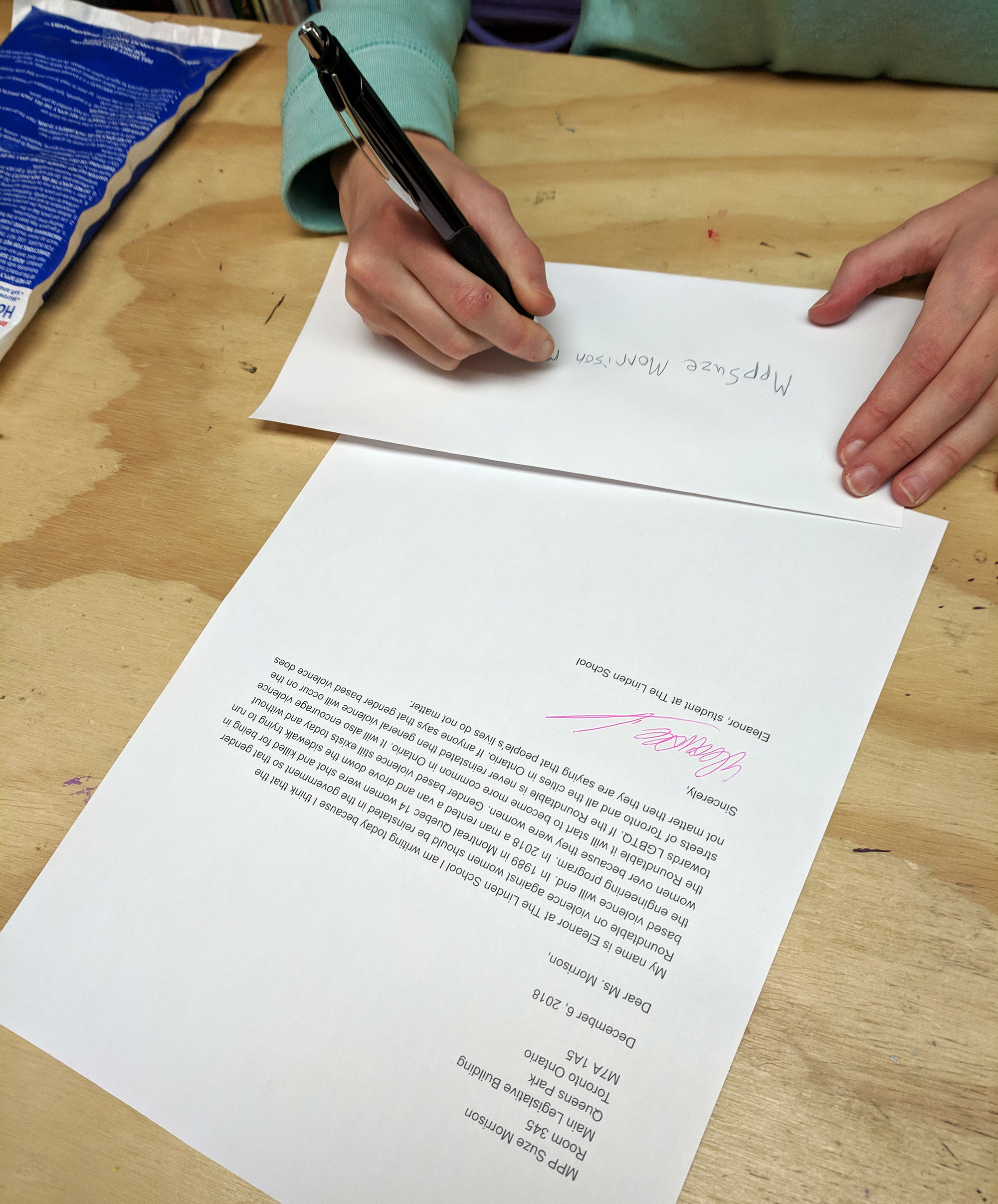 Beth helped anyone wishing to stay inside with formatting and ideas for letter-writing to their MPPs.