Annabel Westell, Class of 2011, Studying Deep-Diving Whales Using Only the Sounds They Produce 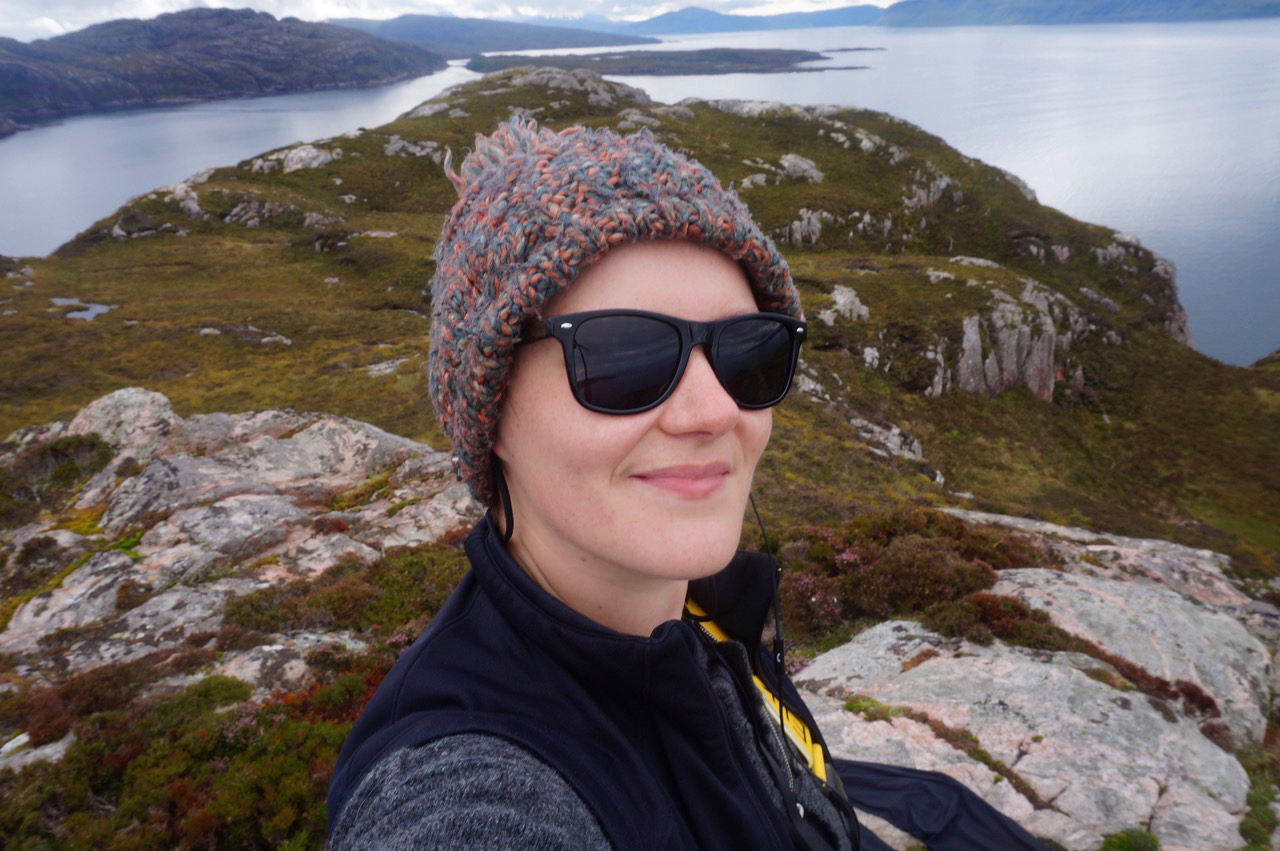 Linden alumna Annabel Westell has forged a remarkable career in marine biology, specializing in the study of deep-diving whales, using only the sounds they produce to learn about their behaviour. She is currently based in Lunenburg, Nova Scotia, and we caught up with her between voyages.

After graduating from The Linden School in 2011, Annabel Westell headed to Dalhousie University’s Marine Biology Program. Spending a week on a boat in the Bay of Fundy studying whales fueled her passion for the field. She earned an Honours Bachelor Science in Marine Biology and International Development from Dalhousie, and went on to earn a Masters in Marine Mammal Science from the University of St Andrew, Scotland. Currently, she works with the National Oceanic and Atmospheric Administration, an agency of the US government. Her research involves the detection, classification, and localization of sperm whales in the western North Atlantic.

What ignited your passion for marine biology?

I have always been passionate about animals. When I was in high school at Linden, I thought I would study animal behaviour or zoology at university – I wanted to work with elephants. However, when applying to schools I realized the program I imagined did not really exist. I decided to go to Dalhousie University because I liked Halifax and the marine biology program offered interesting classes. In my last couple of years at Dalhousie I discovered I loved being on a boat, after spending a week studying humpback whales in the Bay of Fundy. I was very interested in learning how to analyze data using coding languages. I would consider this the start of my passion for marine biology – finding what I most enjoyed made me want to learn more. 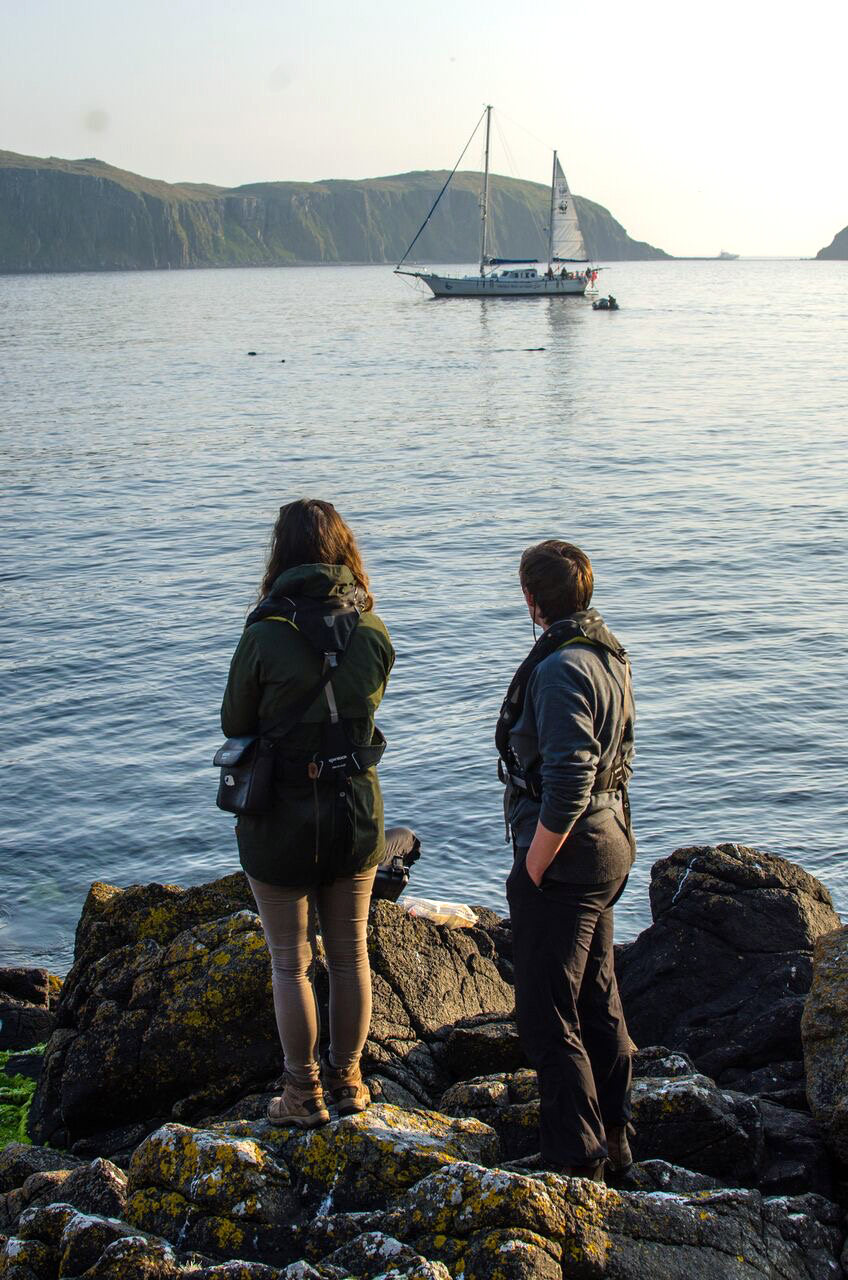 Annabel gazing out at the stunning views on the coast of Scotland.

How many years were you in school between Dalhousie University and University of St Andrews? And what brought you to the program in Scotland?

I attended Dalhousie for five years and graduated with an Honours in Marine Biology and International Development, which is basically the same as completing a double major with a research project and thesis. The Master’s program I completed at the University of St. Andrews was 12 months long — eight months of class work and four months to complete a research project and thesis.

Going to Scotland changed my life, in that I made very good friends, proved to myself that I could work very hard, and developed skills which are the reason I have the job I do today. But I did not leave my undergraduate degree knowing what I wanted to do next. I worked for a year and applied to postgraduate programs in the United Kingdom and Germany. During the application process, I got most excited about the Marine Mammal Science program at the University of St Andrews — not only because of the classes I could take, but also because the university is set in a very beautiful, very old town in Scotland.

After being accepted, I was still very uncertain about whether I should go, largely due to the cost of international student tuition. Eventually, I decided to go to Scotland because I was still most interested in the University and Marine Mammal Science program. It was the right decision, but I say all of this because I think it’s important for younger students to know that these decisions do not come easily to many of us. I found an area of science that I am interested in and want to learn more about, but I did not start out knowing what that would be. 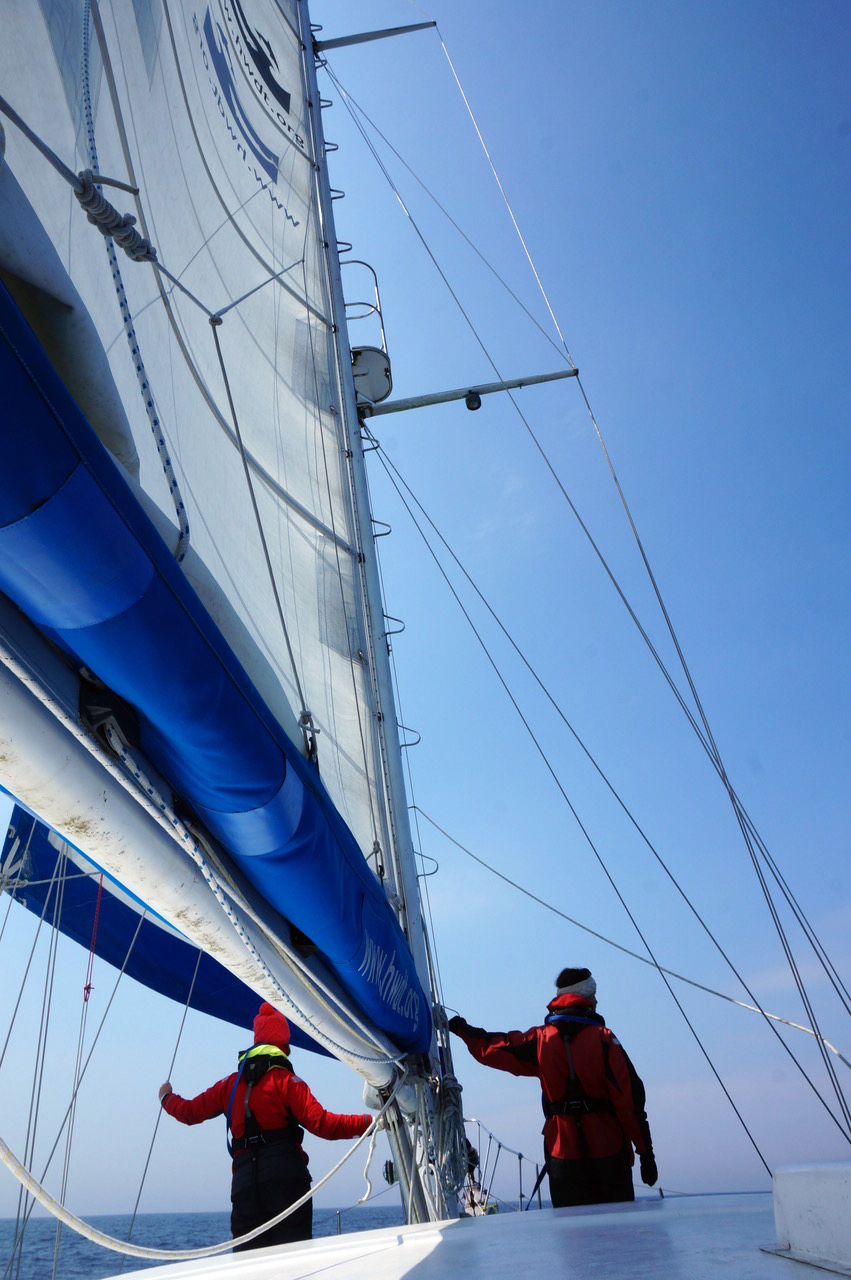 While the boat is certainly where she would prefer to be, these days Annabel spends most of her days at her computer.

The NOAA’s mission is to better understand the world around us while protecting natural resources and managing marine & coastal ecosystems. The organization’s reach “extends from the surface of the sun to the depths of the ocean floor.” In Annabel’s current role with the NOAA, she specializes in a complex field using acoustic localization to learn about sperm whales.

Was the study of acoustic localization always a field of interest for you? Are there other areas that you hope to explore throughout your career?

No, definitely not. Passive acoustics and acoustic localization are quite niche and technical areas to work in, and were just touched on briefly during my undergraduate degree. I became familiar with how acoustic data is collected and used to localize whales because it was the topic of my Master’s research project, which was designed by one of my supervisors. I selected this project because I wanted to challenge myself and become more familiar with passive acoustic research, as it’s a growing field and can be used to study many different terrestrial and aquatic animals.

Biologging, which involves tagging an animal to track its movement, is another area I am very interested in and I would like the chance to learn more about. Sea turtles can have a tag attached to their shell and be tracked for months during their long migrations, or large whales like blue whales can have a suction cup attached to their back for a few hours, which can help us see what they do while they are diving. 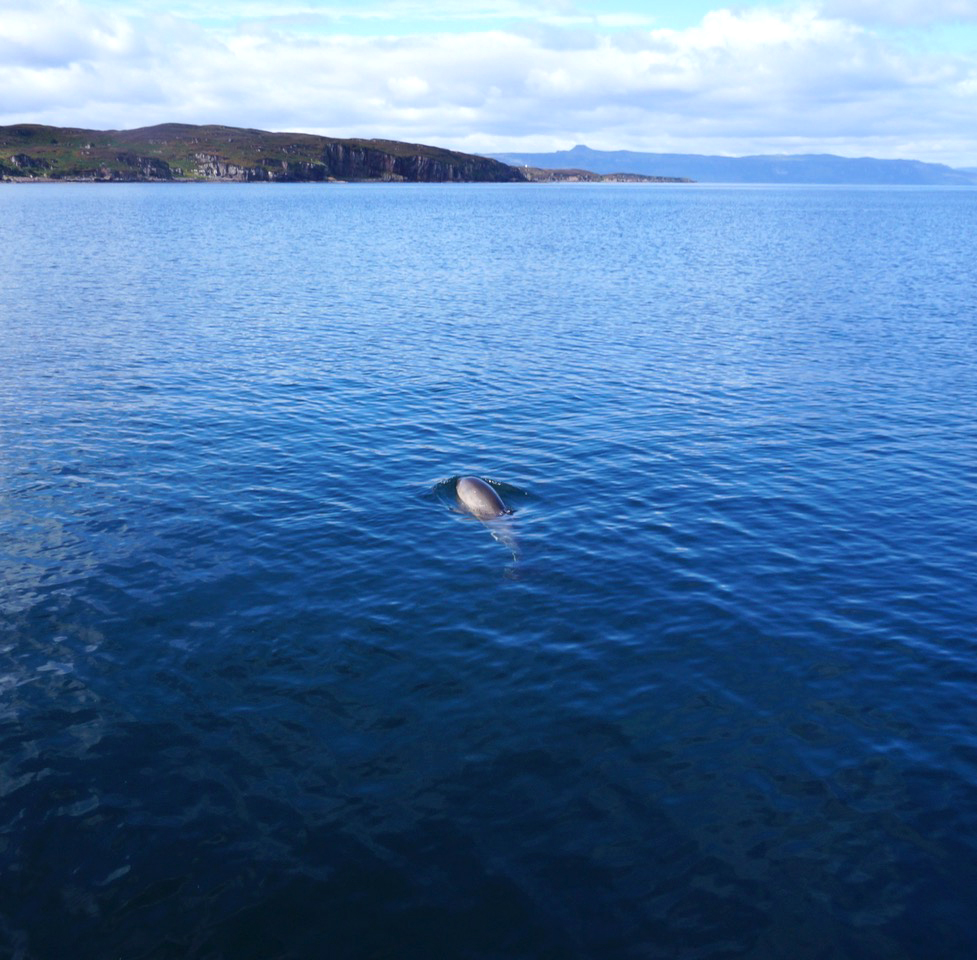 Views from the boat.

What do you hope to accomplish with the National Oceanic and Atmospheric Administration?

The group I work with has many ongoing and new projects that I enjoy working on. My goal going into my current job was to learn as much as I could from my more experienced colleagues about analyzing acoustic data, reporting research results and using equipment in the field. I have learned a lot since I started about a year ago, and already feel more confident and competent in my work. 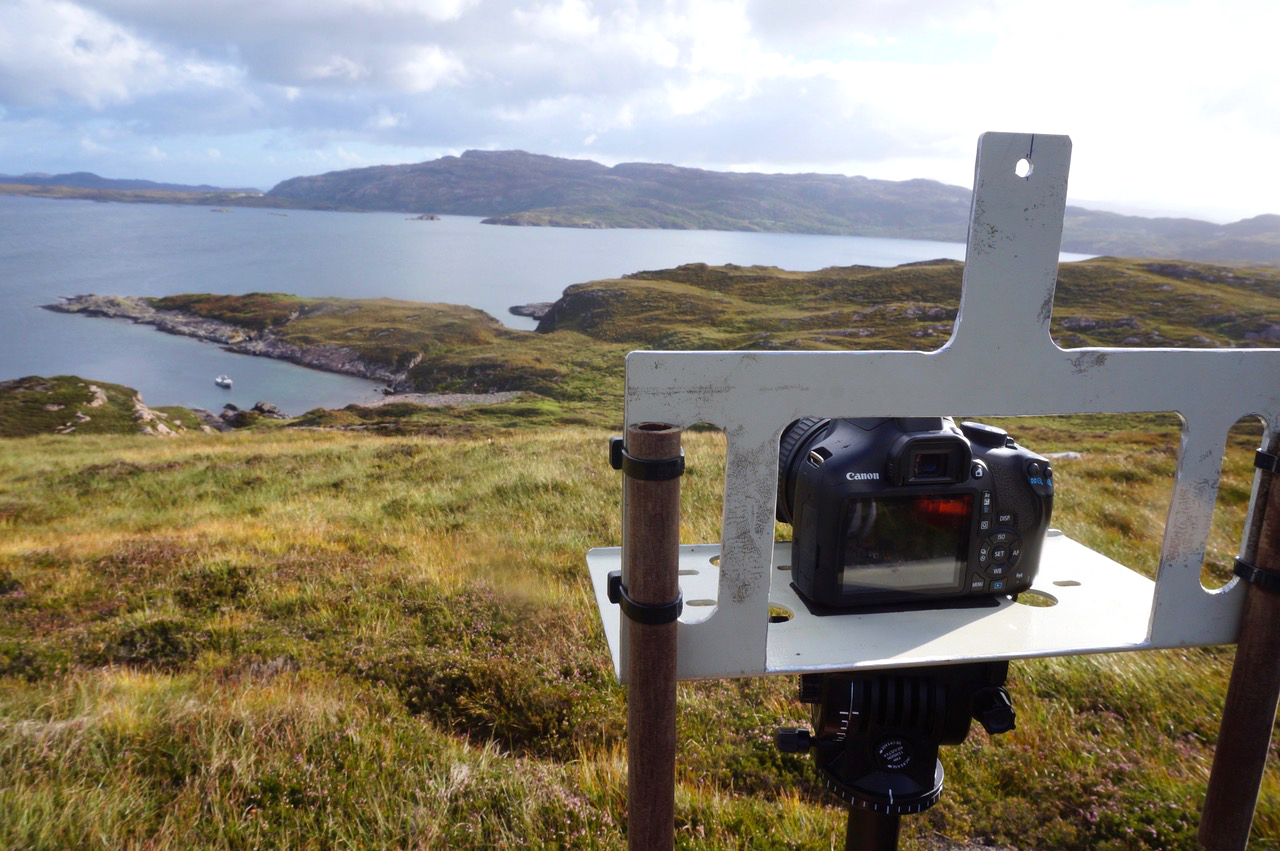 How is the field of marine biology evolving as our climate changes?

Many established ocean scientists and marine biologists have spent decades trying to get politicians and the public to take climate change seriously. Now that there is more interest in and funding for climate change-related research, there are more opportunities for scientists to study how conditions are changing or which species are being impacted. With new technologies and tools, we can also combine lots of different information – like oceanographic data and fish density and whale habitat use - to try to understand all the important factors. However, as most students at Linden will know from their biology classes, ecosystems are complex and it is very difficult to predict changes. We know that the oceans are changing and will continue to change. I hope that species will adapt, but there are many things we can do to make it easier on them including reducing the risk from vessel strikes, entanglement in fishing gear, and anthropogenic noise.

What’s next for you?

How did your time at Linden impact you?

More than 10 years after graduating from high school, some of my closest friends are people I met at Linden. Although we have all changed and grown a lot since leaving Linden, I feel as comfortable with them now as I did when we spent almost all our time together. We respect and support each other. The transition out of high school is exciting but can also be very challenging. At first I found it difficult to make friends and tried to fit into groups that really didn’t suit me. But what I realized in university was that the friendships I made while at Linden were the type of supportive and fun relationships I wanted to find again. So instead of trying to change myself, I looked for people who I felt comfortable and happy around.