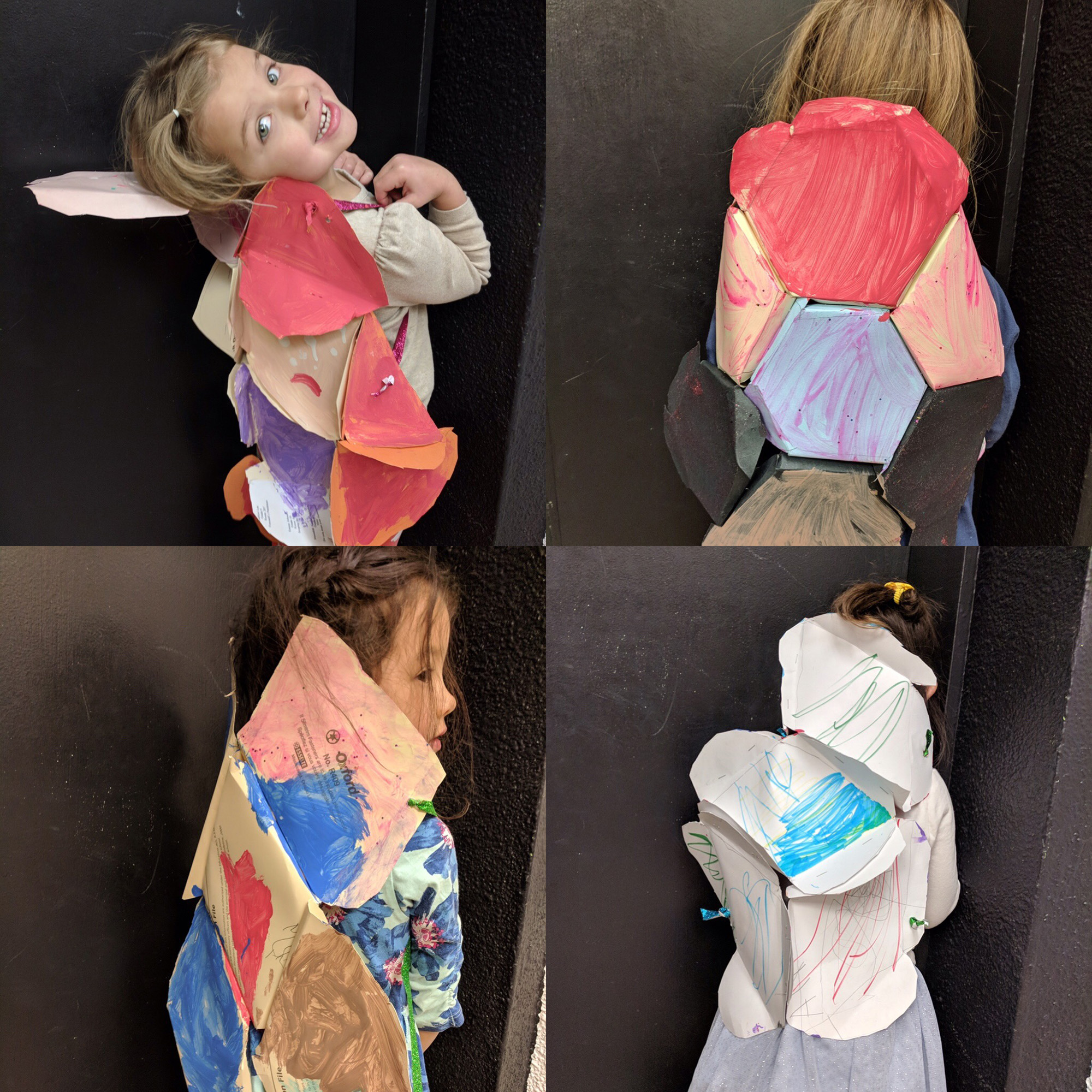 We've had a lot of fun together on this shorter week at school. The girls finally got to paint their CERES turtle shells in preparation for the parade we had on Friday. As well, they started learning about symmetry and dug deeper into their understandings of turtle life cycles and food chains. After raking up the leaves at the YWCA Woodlawn Residence on Thursday, we were excited to see all of the snow on the roof on Friday. Take a look at our adventures from the week. 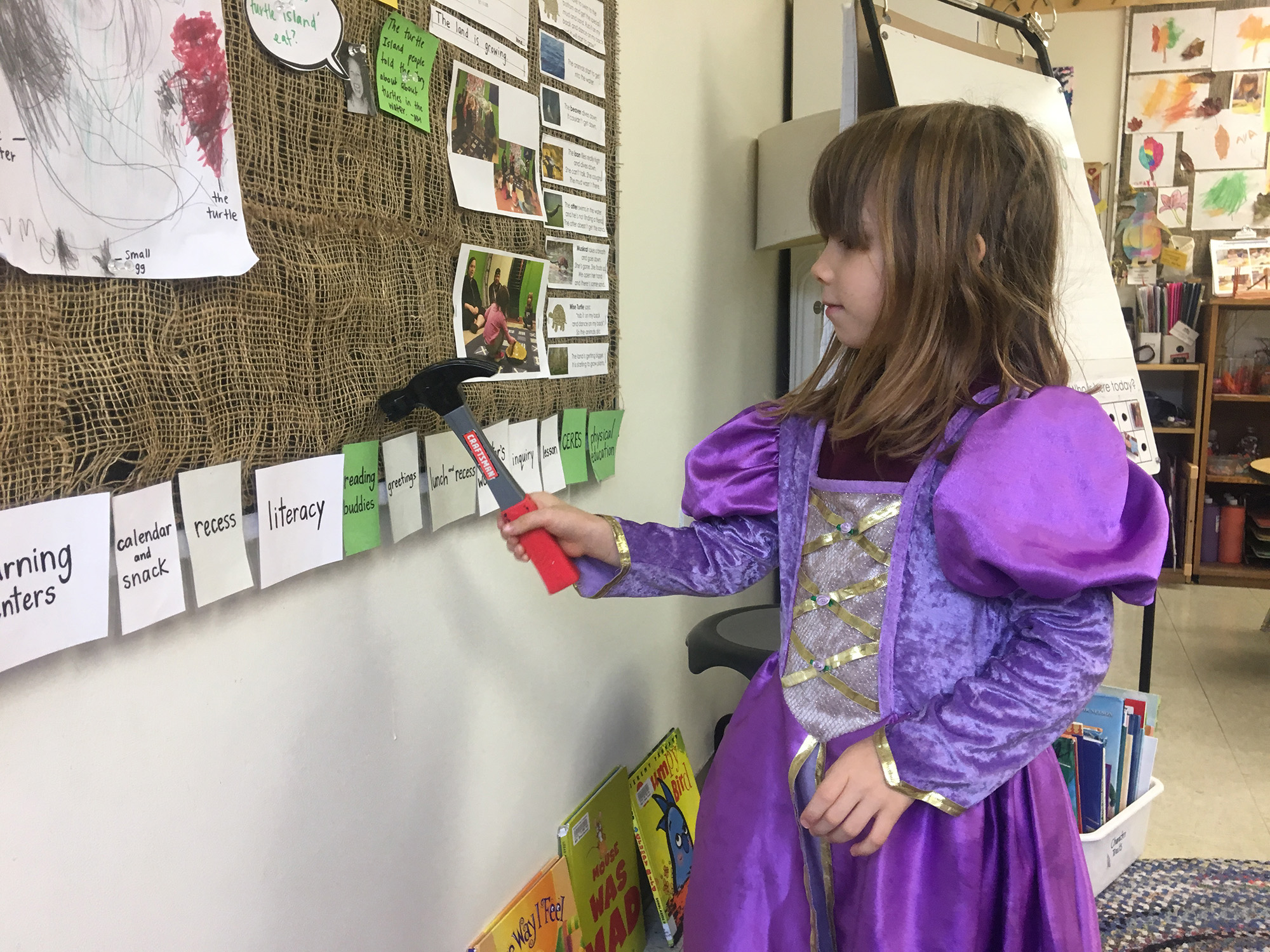 A fixes the broken board in the classroom with the new toolkit in the Drama centre. 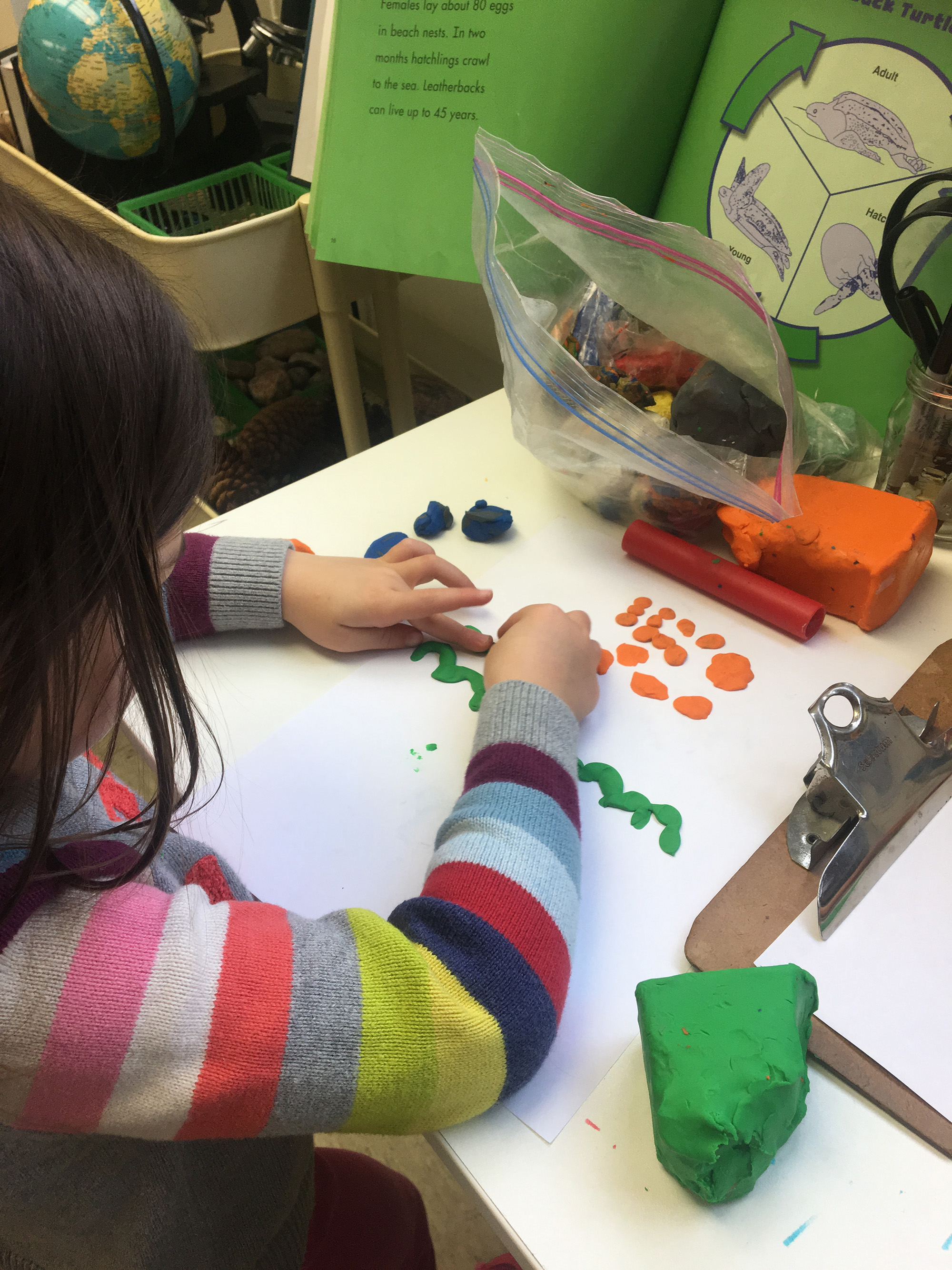 O is learning more about turtle lifecycle and representing her understanding using plasticine. So far, she has included ten turtle eggs and the momma at the top, below it is she has made four baby turtles, and her waves are in progress. O explains that the turtles go out to sea once they have hatched from their eggs. 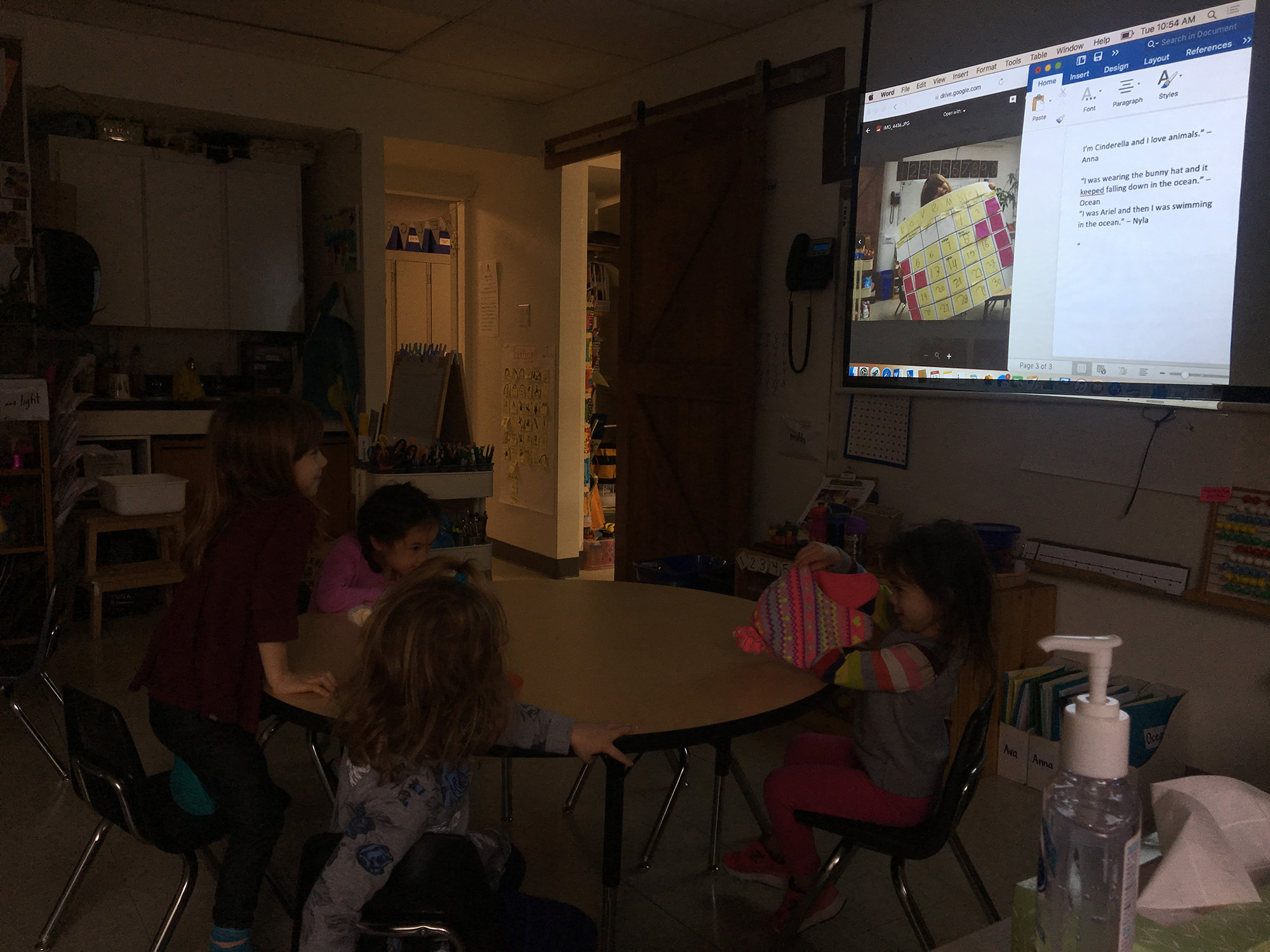 The Early Learners help out with last week's blog post. As a group they view each photo, and then they offer up a caption if they have something to say about a specific photo. 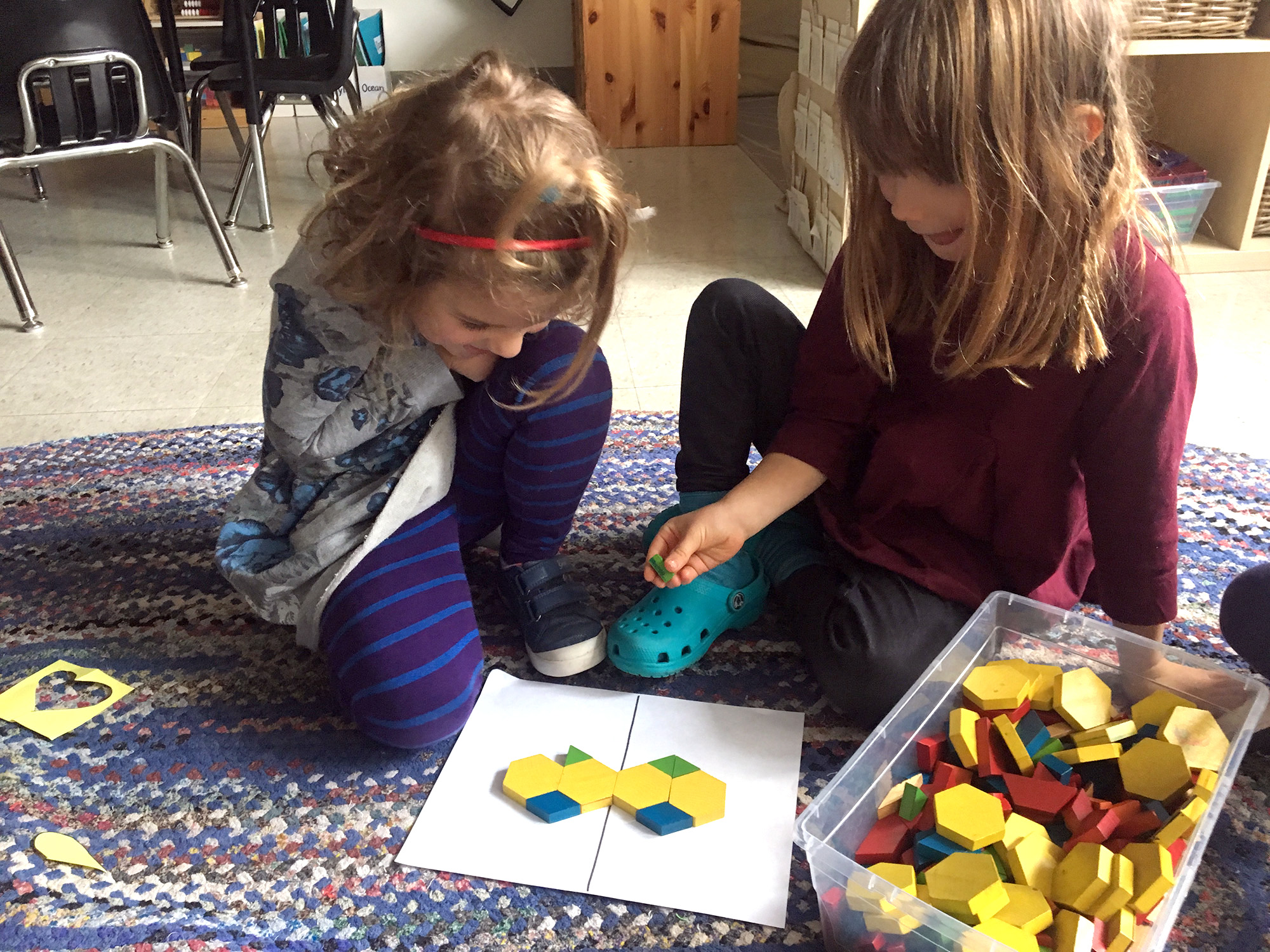 AB and AK work together to create a symmetrical design. One at a time the girls each place a shape and then the other one has to put the same shape on the other side of the line of symmetry so that the image stays symmetric. 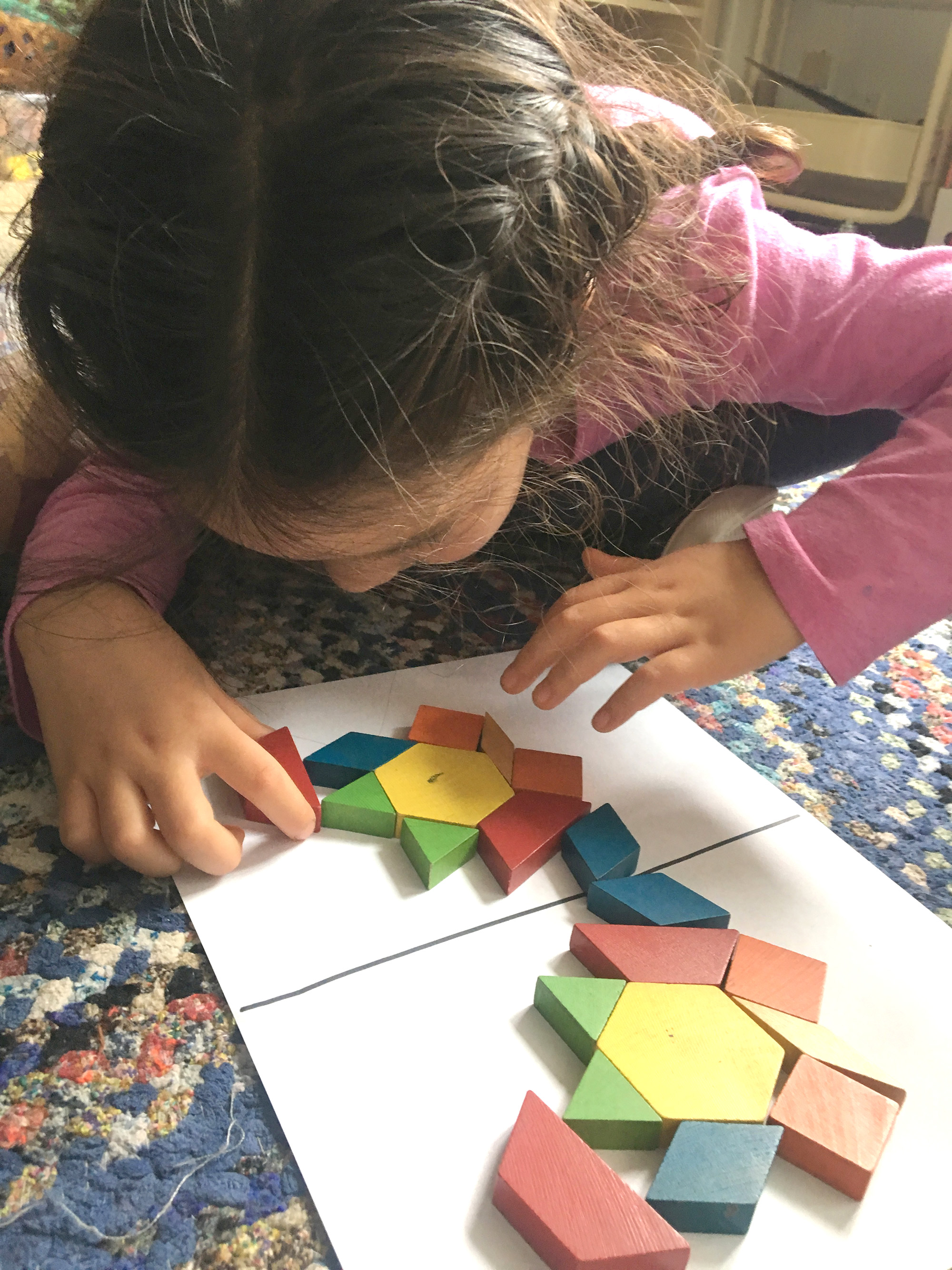 N focuses in closely on the symmetry game as she places the trapezoid to make both sides symmetric. 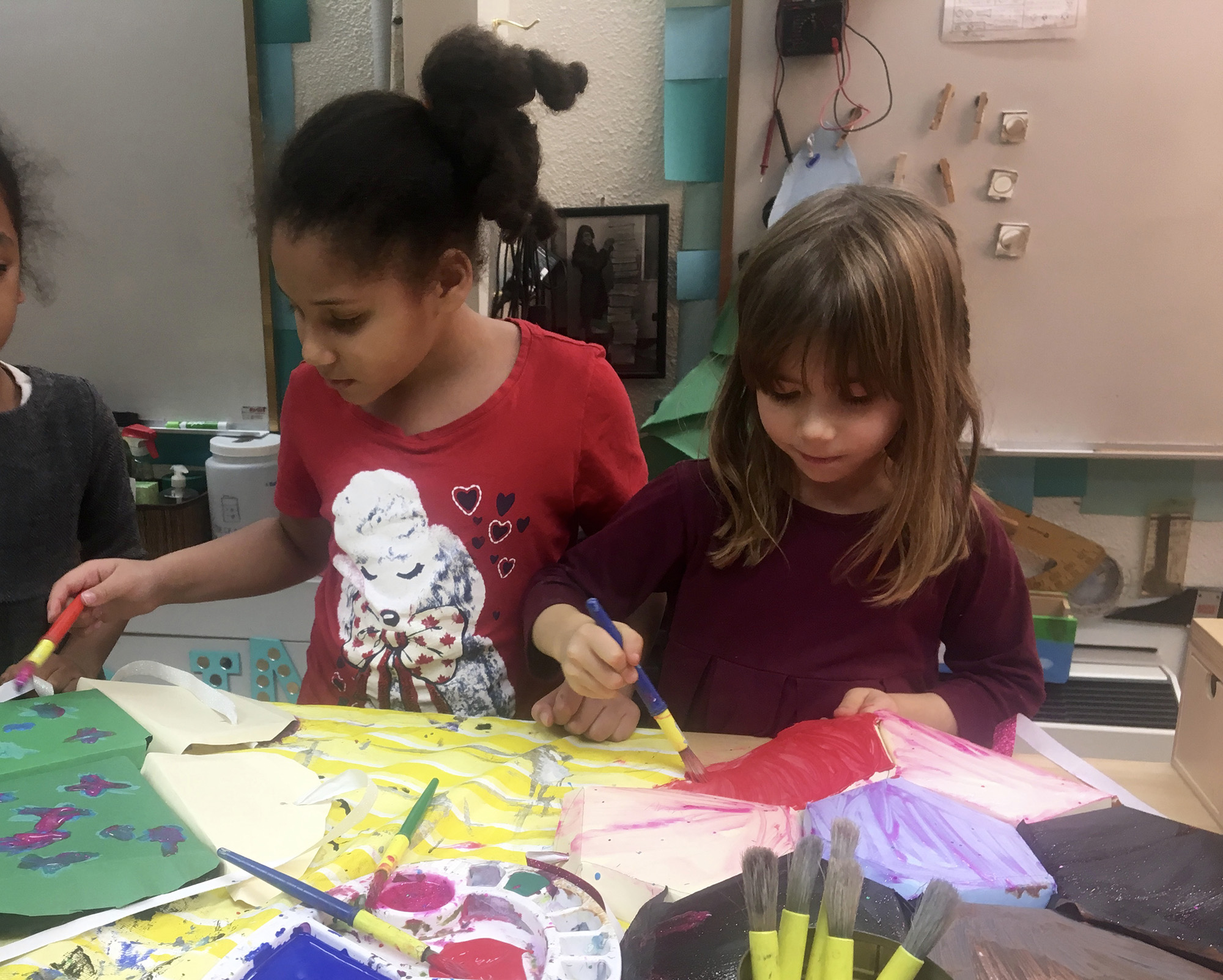 AH and AK paint their finished turtle shells in CERES today. They are very excited about the upcoming parade, as well as motivated to finish their painting during class time. 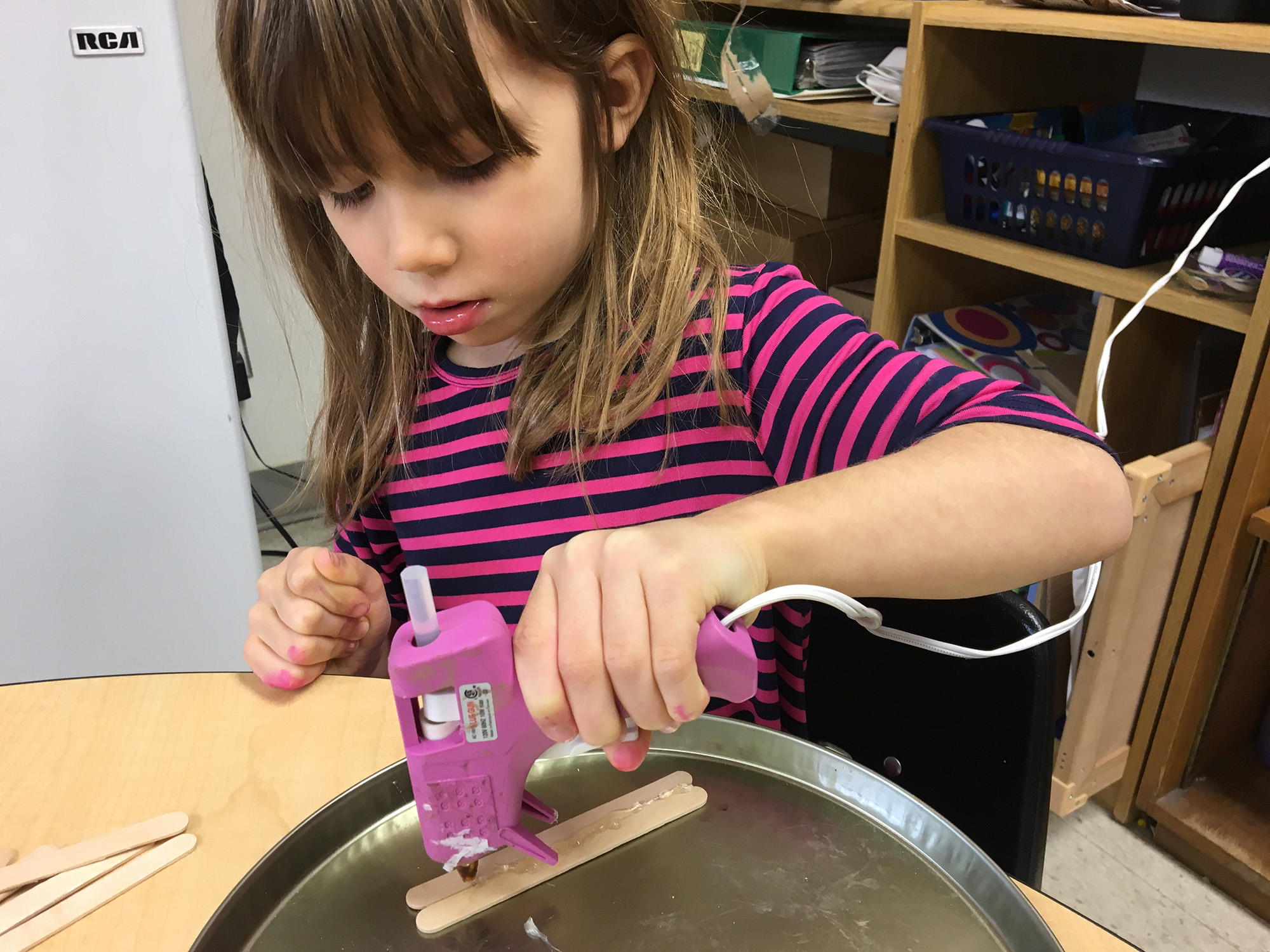 AK has begun a new project at the Art and Light centre. Right now, she is working on glueing the draw-bridge together for her castle. 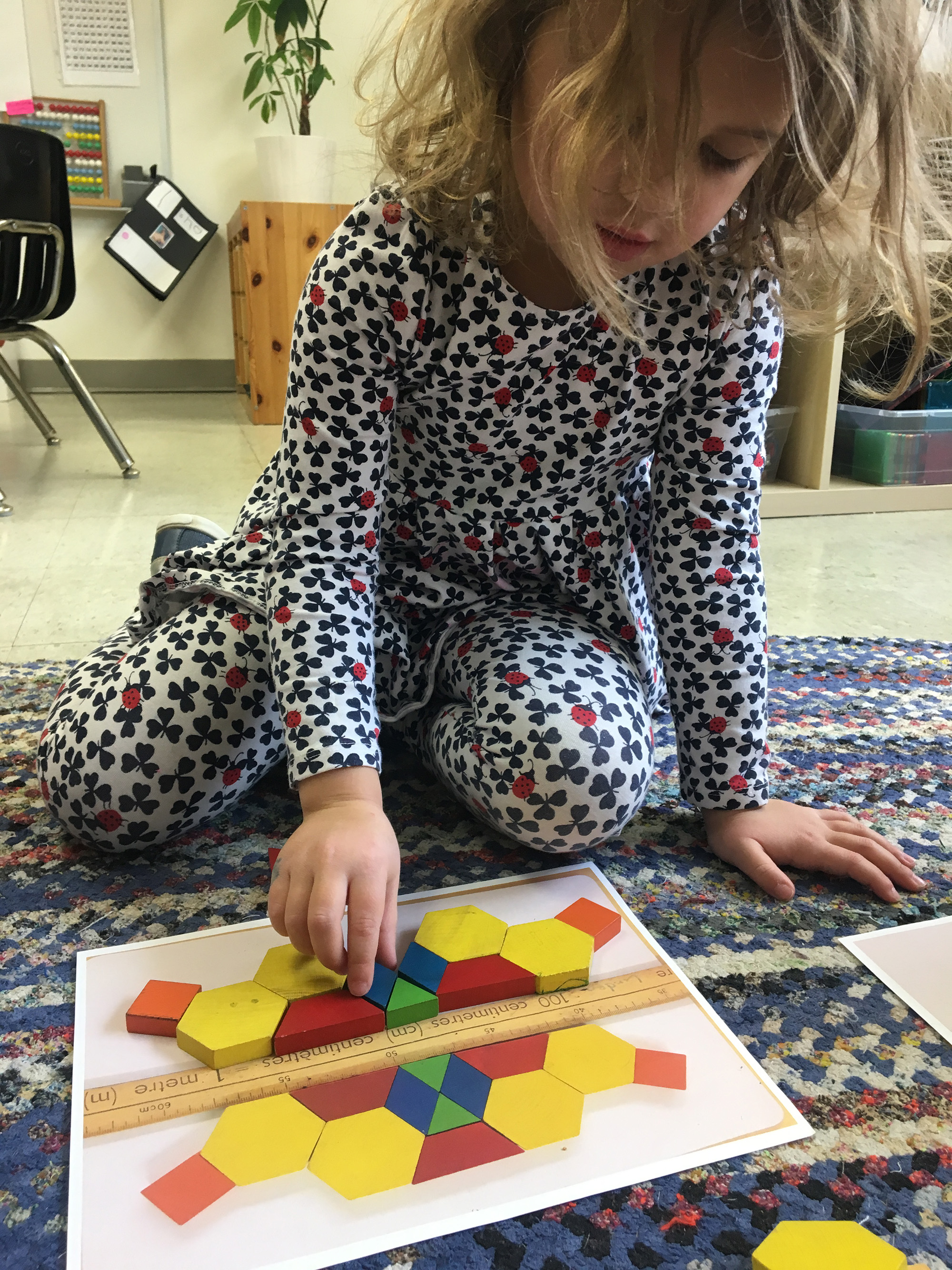 AB further explores the concept of symmetry by building the other half of a symmetric design using the pattern on the page. She begins by placing the shapes that are touching the "line of symmetry" and then builds out from there. 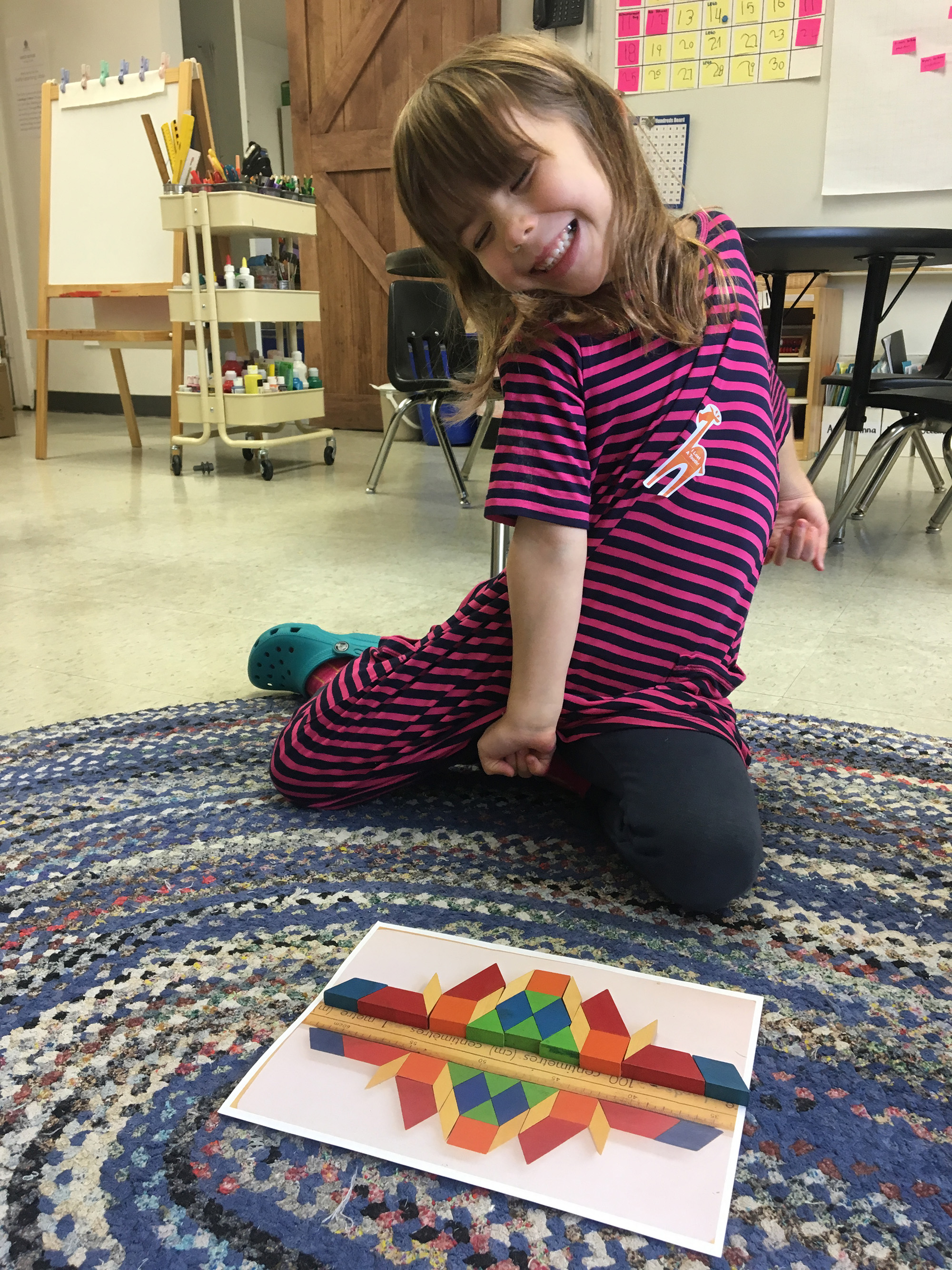 AK does a celebratory wiggle after completing her symmetrical design. It was a challenge to do, but AK persevered through all of the frustrations and is proud of her accomplishment. 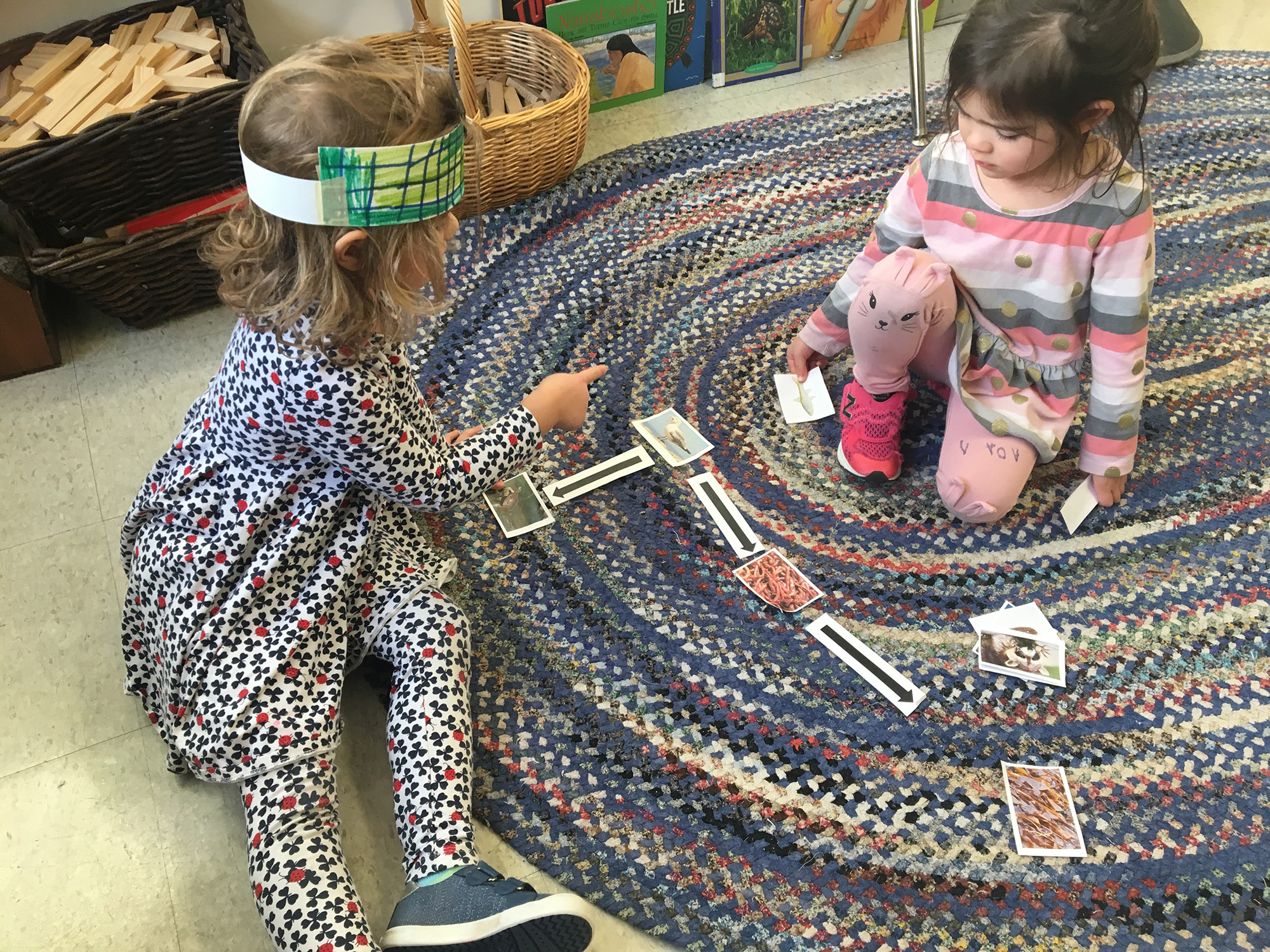 This afternoon we are learning about food chains that turtles (both fresh water and salt water) are a part of. A and O design their own "fresh water food chain", starting with a top predator and working down to some type of plant. 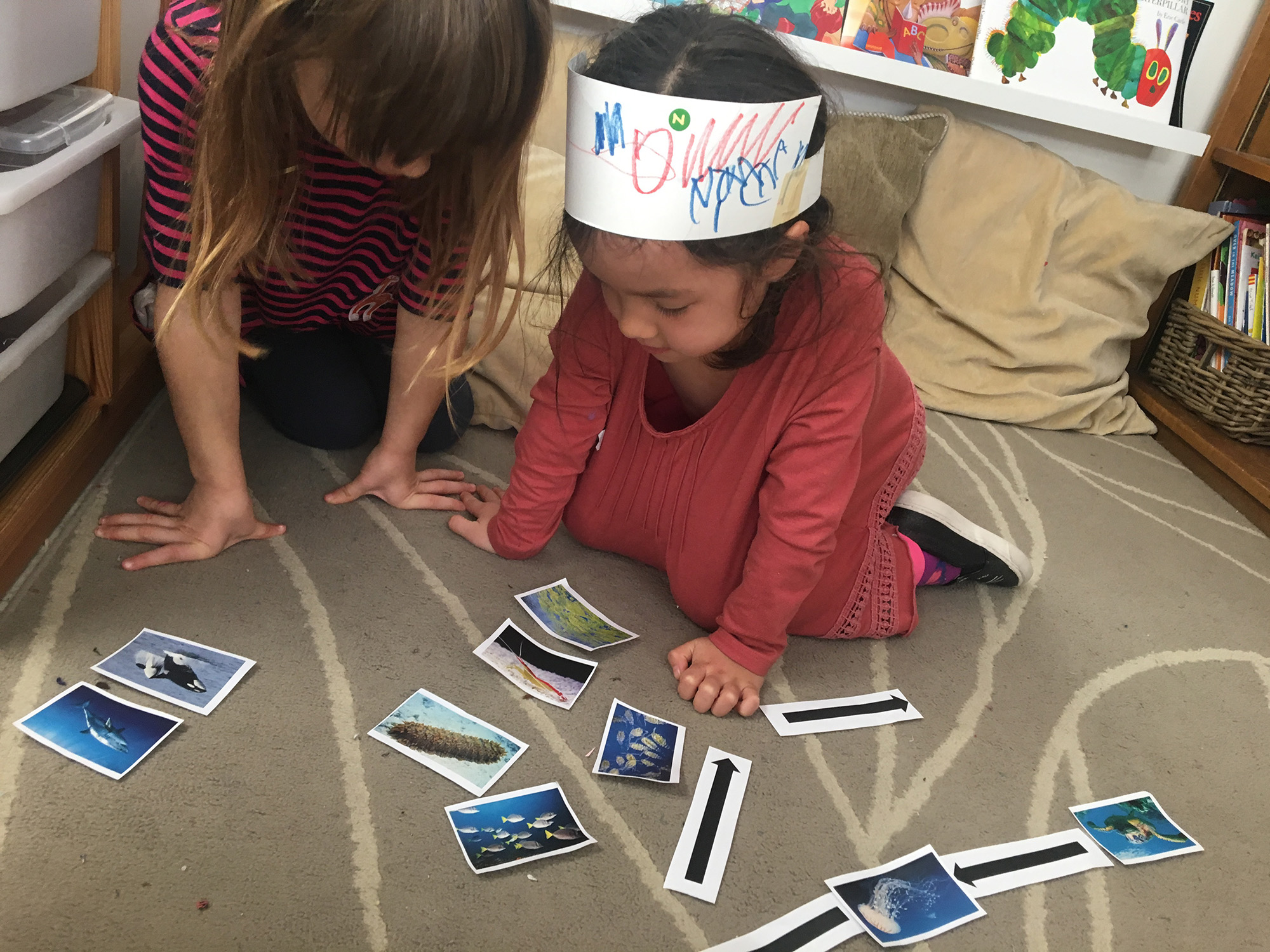 A and N are also designing a food chain, but theirs includes living things from the sea. Right now these two are trying to decide if the killer whale or the shark should be the top predator in their food chain. 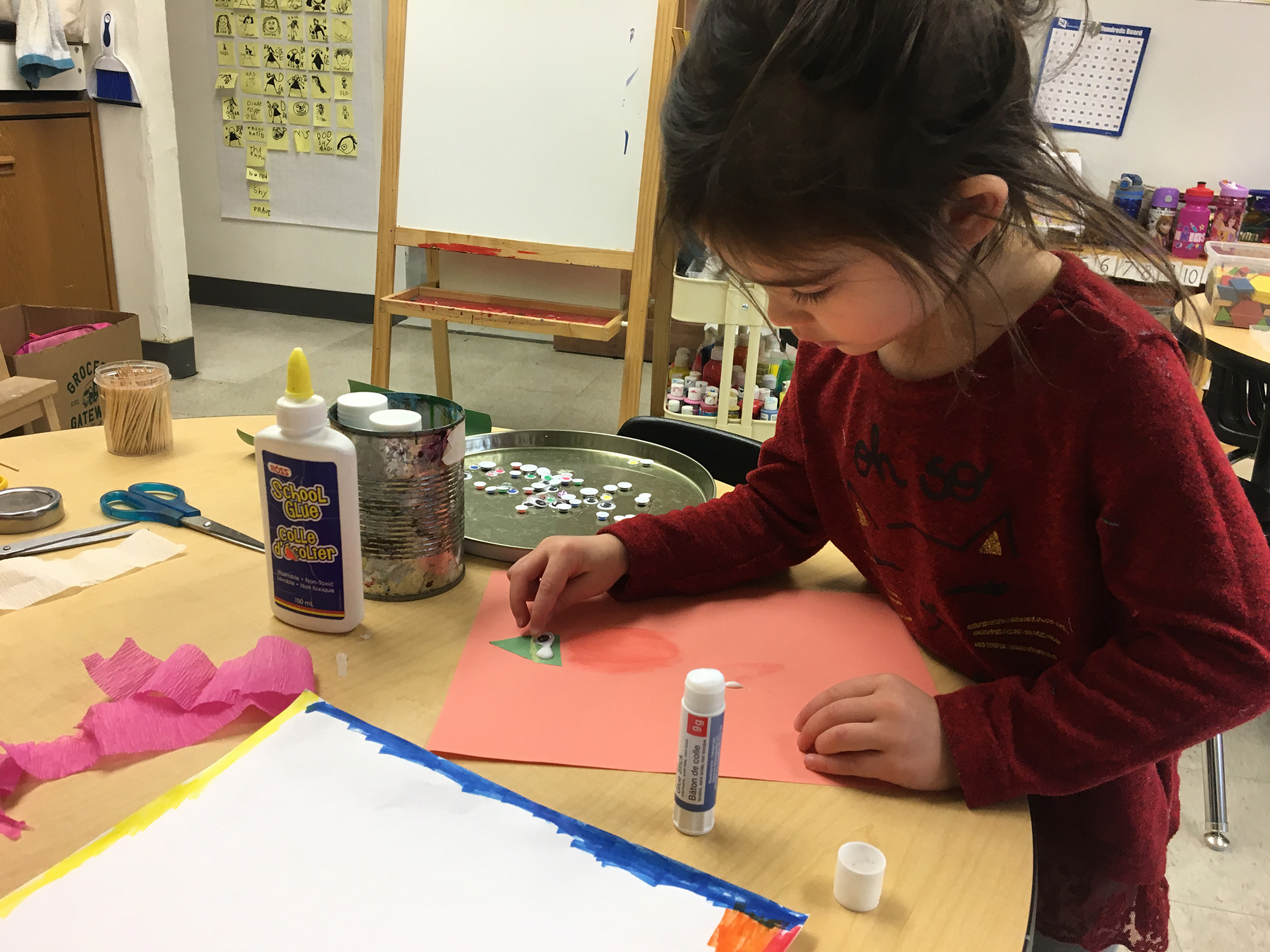 O is channelling her creativity at the Art and Light centre this morning. She's creating some type of person using different materials. 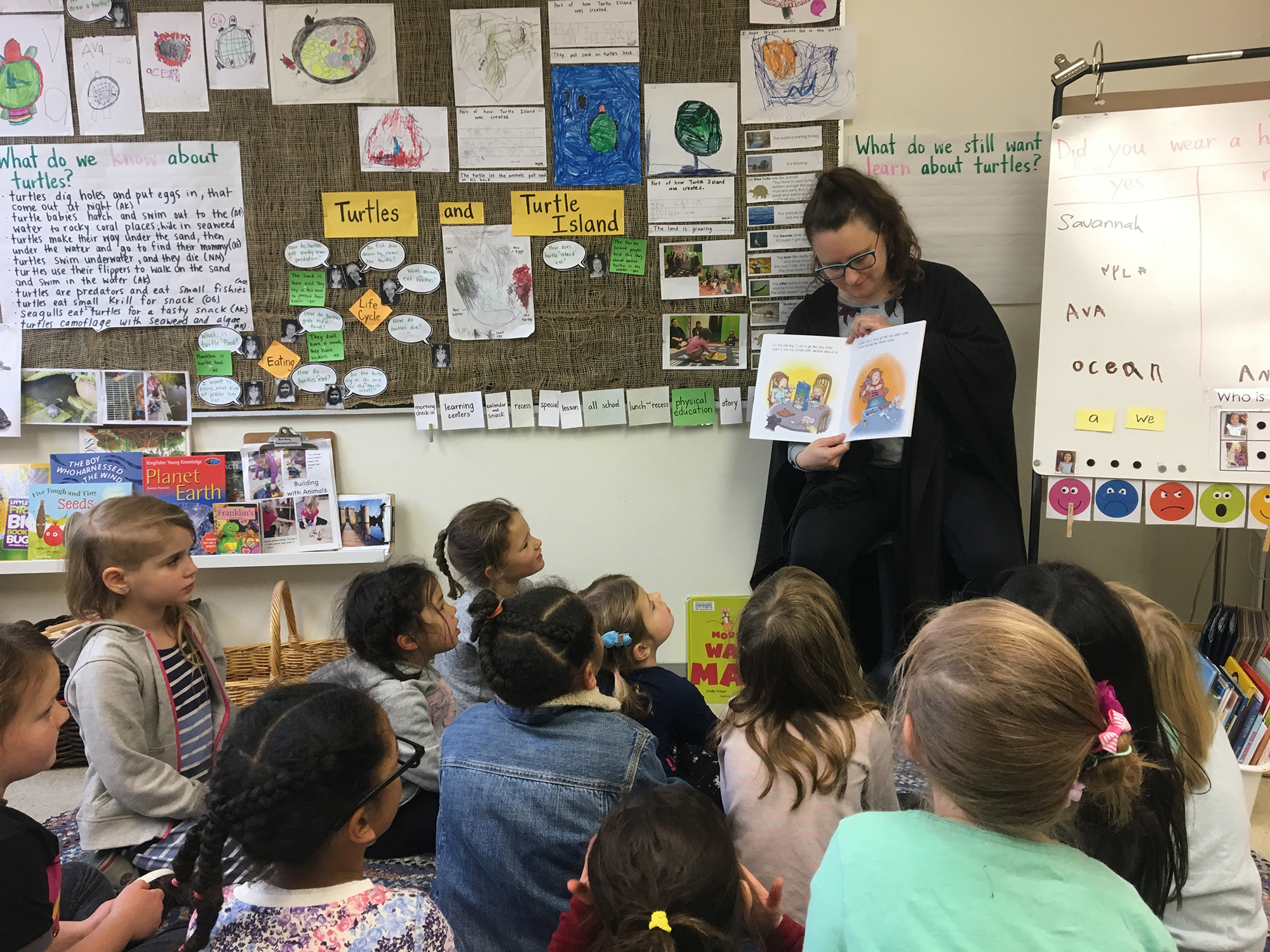 Leading up to Trans Day of Remembrance, Ruthie, Linden's Guidance and Learning Counsellor, reads a story about a young trans girl to the Early Learners and Grade 1-2 students. Together, we talk about the importance of inclusion and respect for all, and the different identities that people can have. 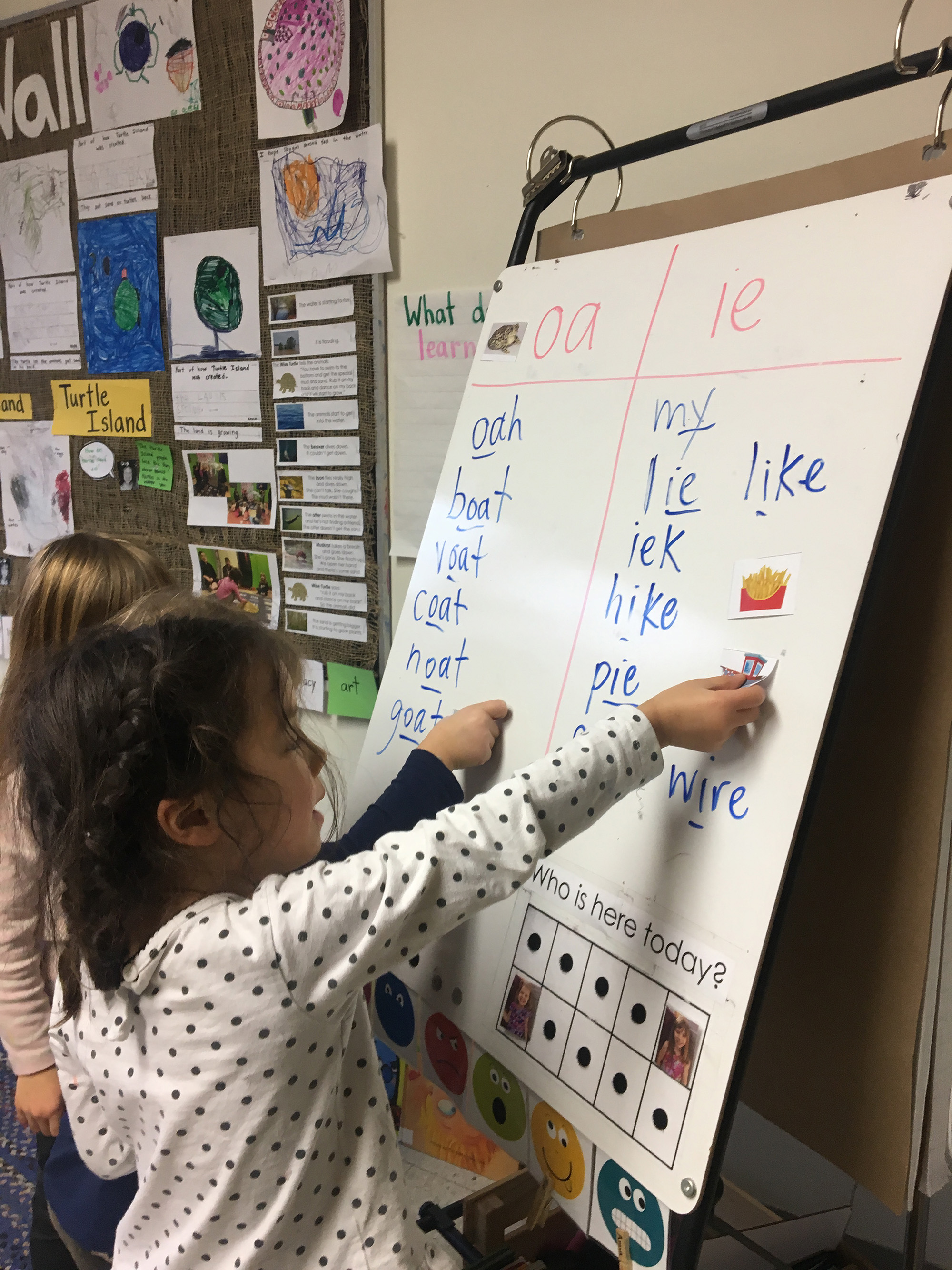 N works on matching "boat" to the right vowel sound after this morning's phonics lesson. 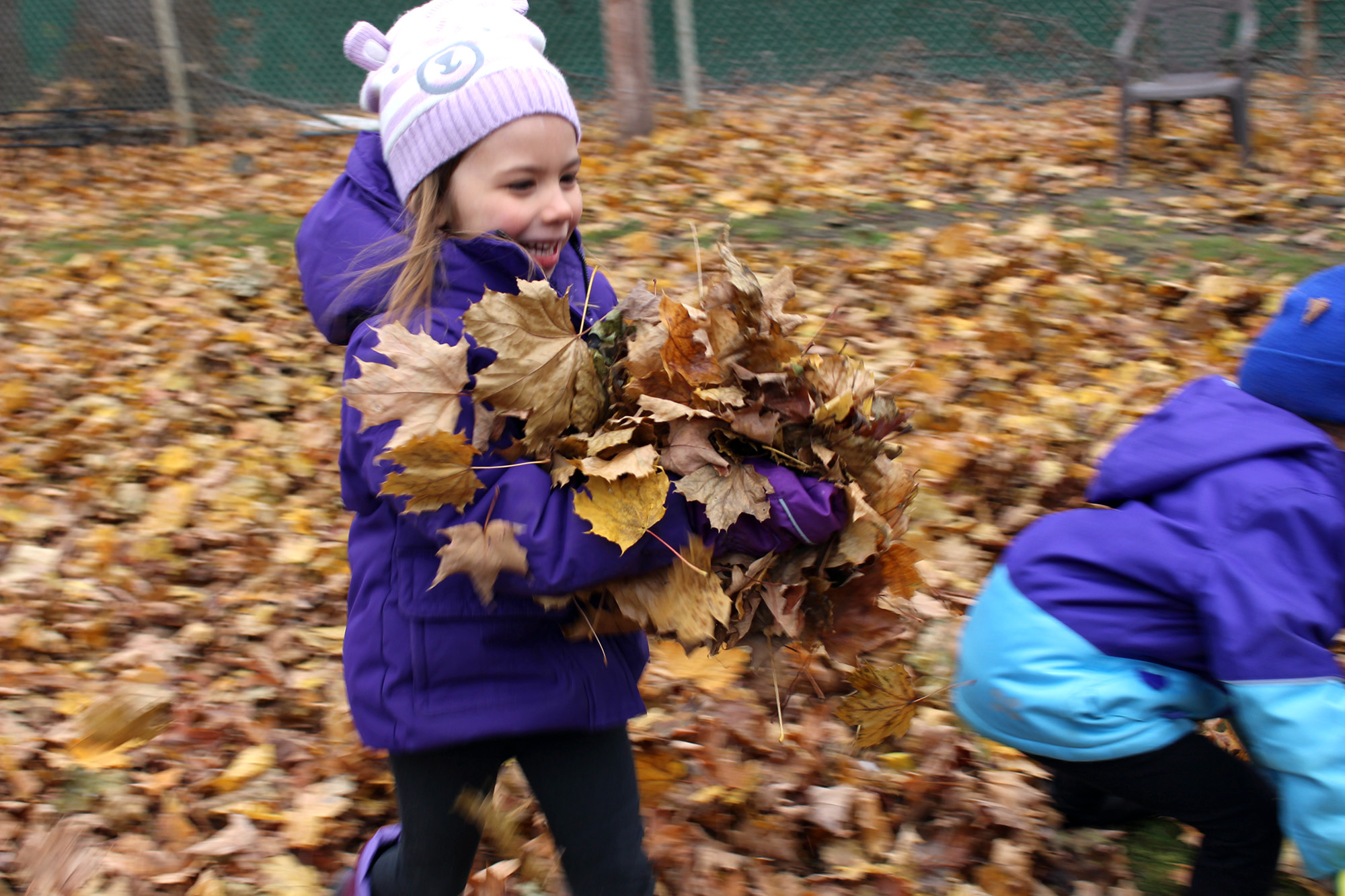 The whole school is at the YWCA Toronto's 1st Stop Woodlawn Residence to help clean up all of the leaves from their yard. A scoops up a big handful from the pile and quickly gets them into the yard waste bag. 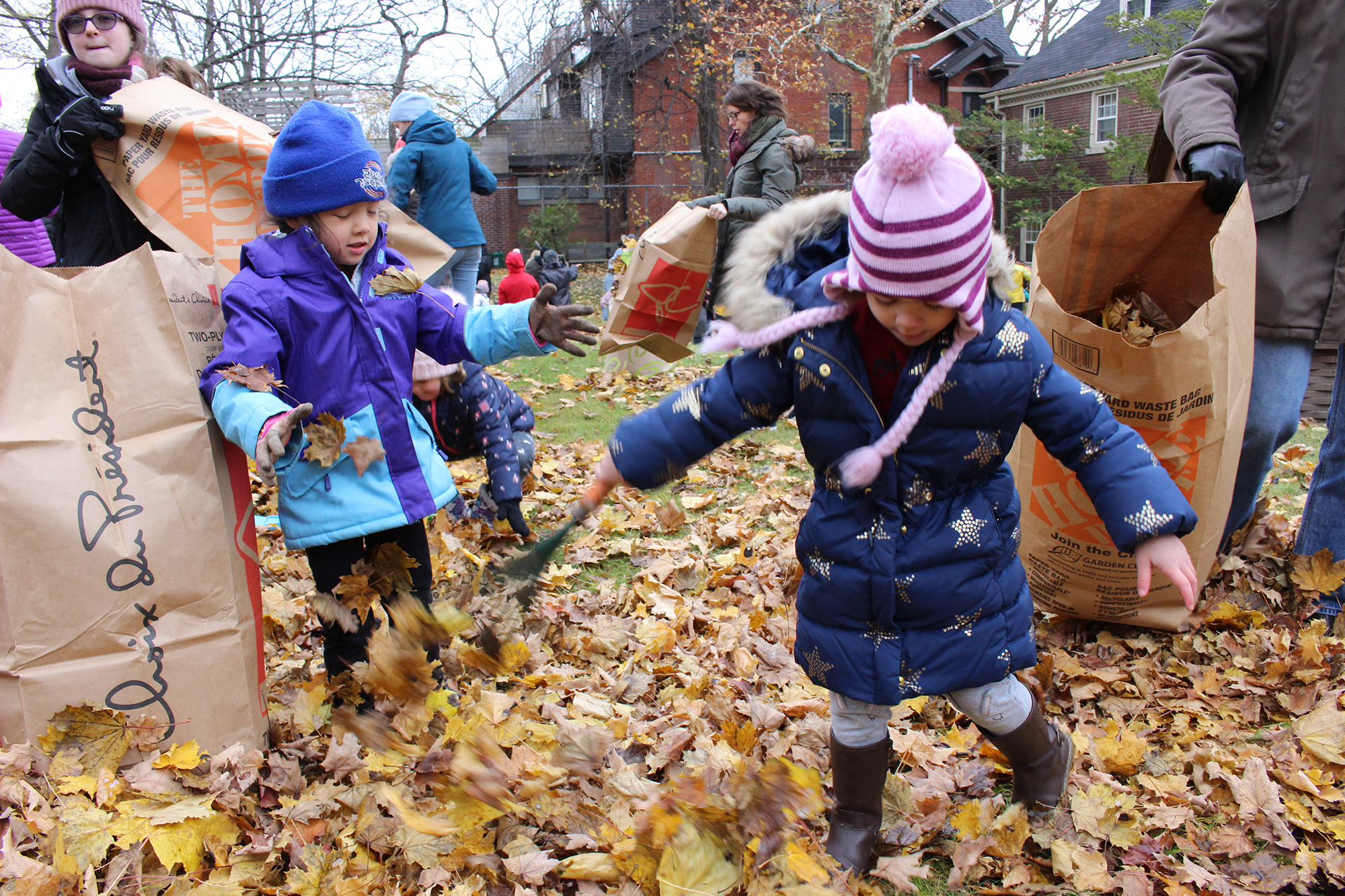 N and O work as a team to clean up the pile of leaves. O uses the mini rake to get the leaves closer to N, and then N scoops them up with her gardening gloves and puts them in the bag. 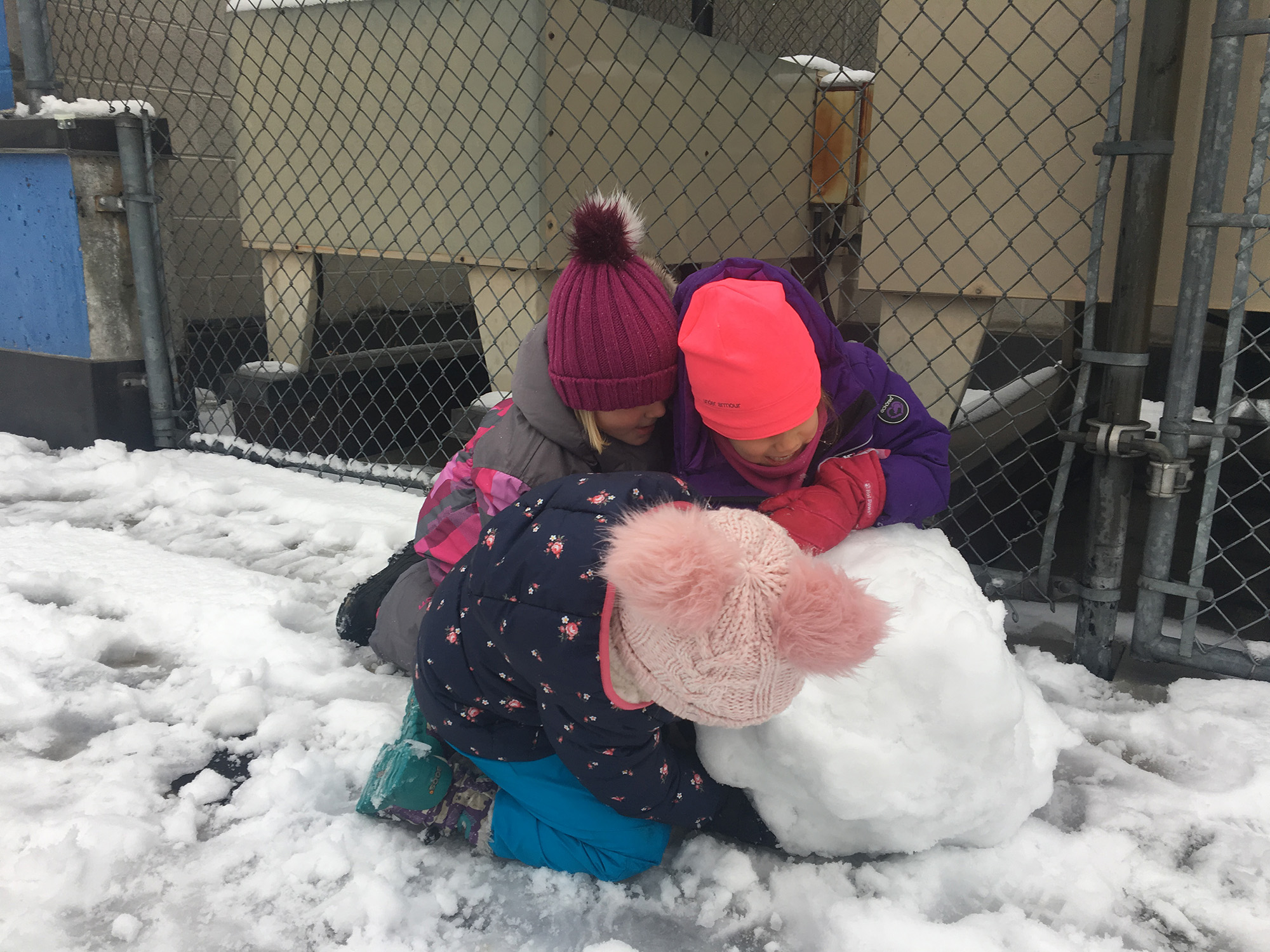 AK, AB and G (grade 1) are thrilled about the first snowfall of the year. These girls work together to roll the snowball in order to gather even more snow. 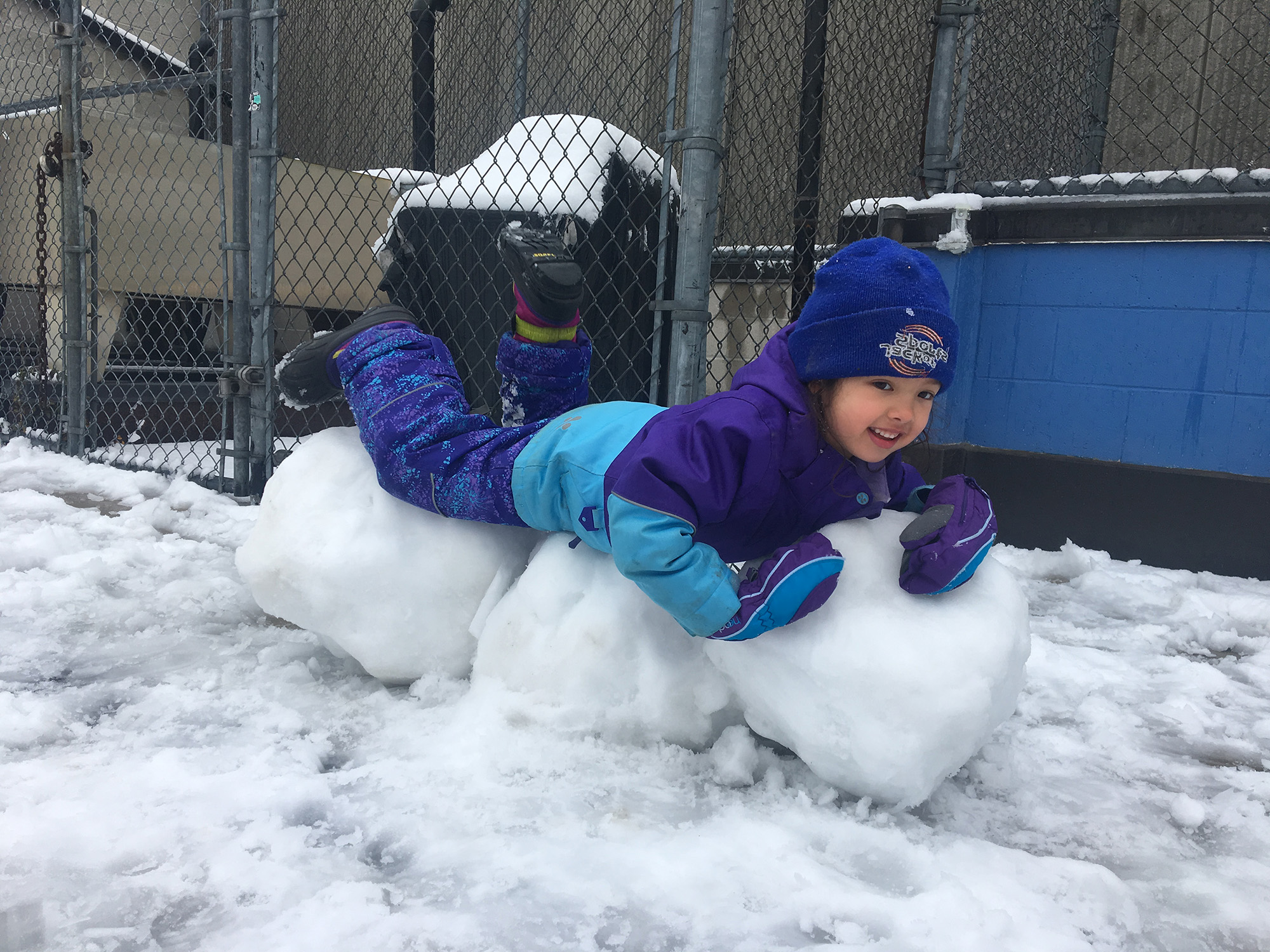 N slides down the student-created snow-slide on the roof. This early snowfall gives us all a taste of the outdoor fun to come in the winter. 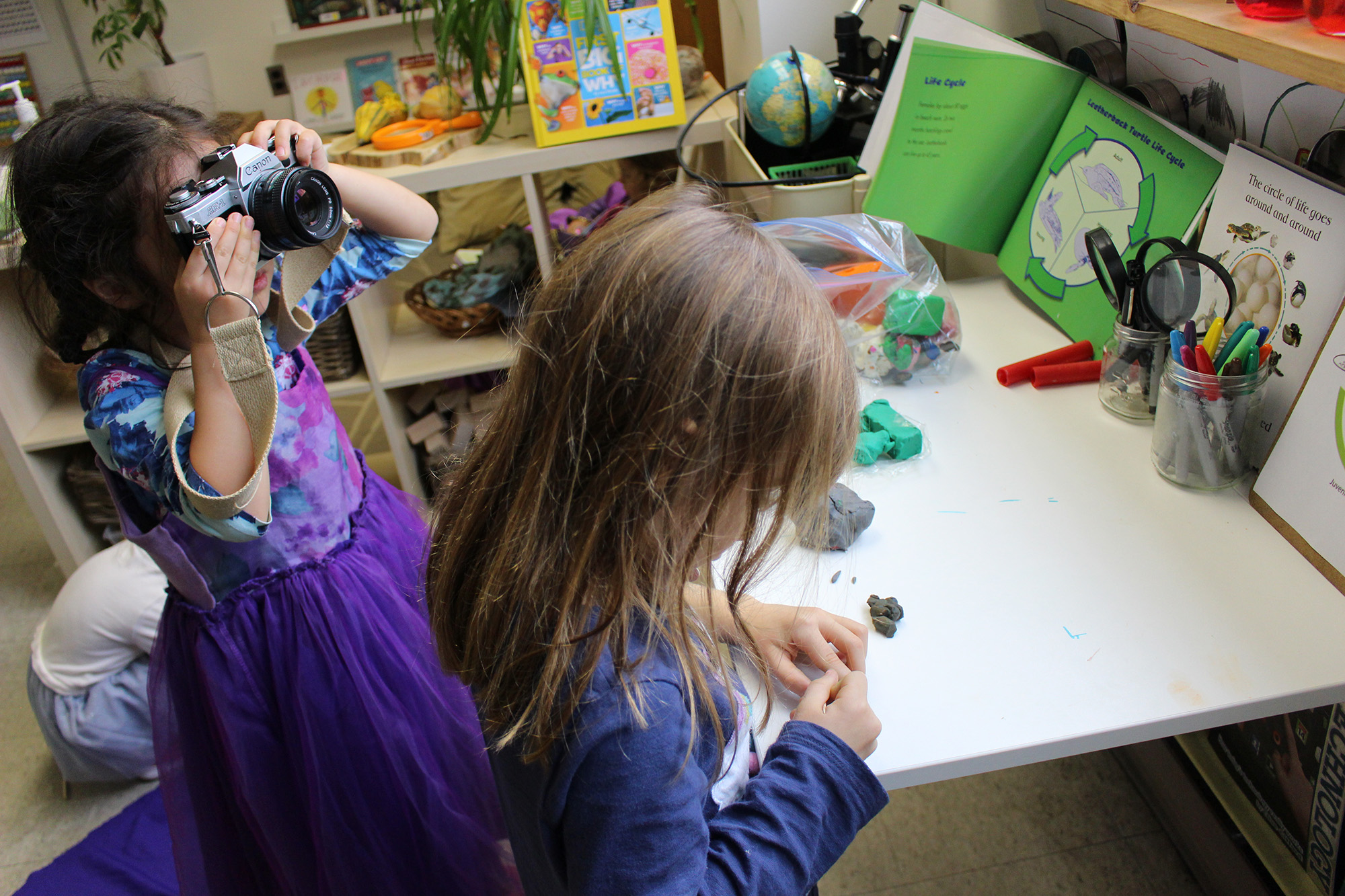 N snaps a picture of A as she builds a turtle out of plasticine because she knows how much effort A is putting into her work. 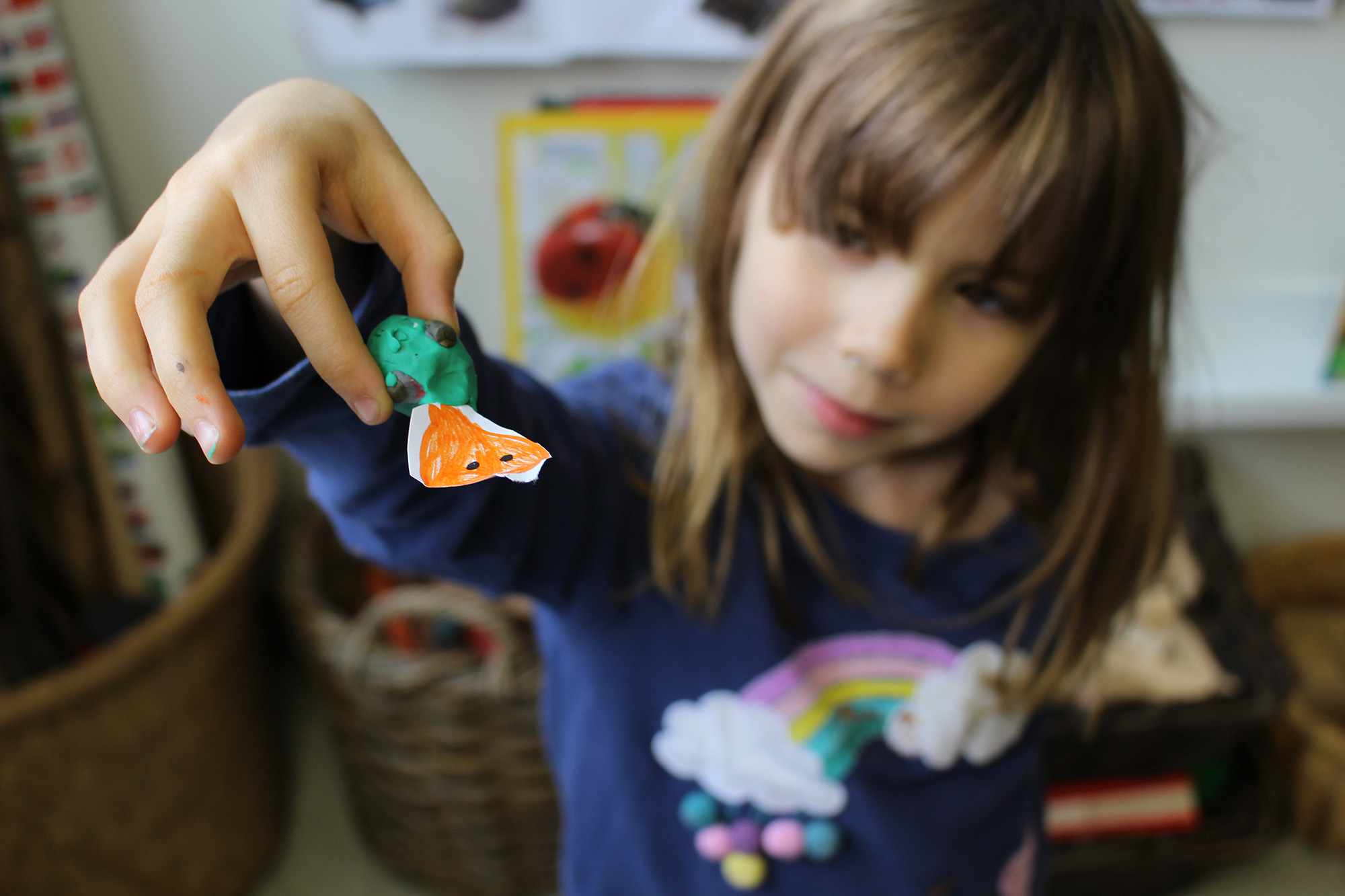 A's turtle head is done, and she has even added a little fish for it to eat. She knows that turtles are predators and like to eat small fish as well as other aquatic plants. 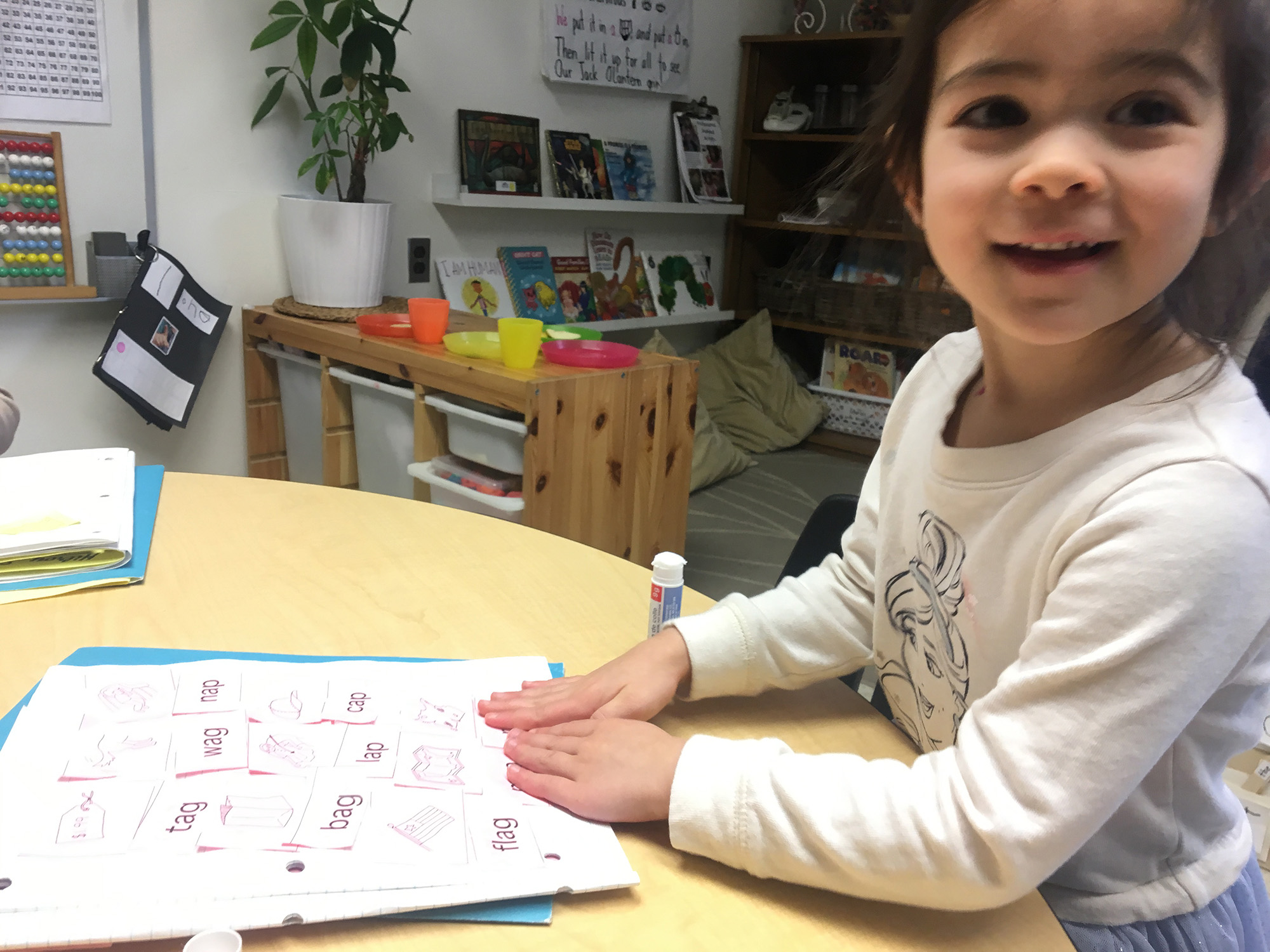 O beams with pride when she is the first Early Learner to finish her "sort and glue" word study task. She mentions that it usually takes her a lot of time, but today she was focused and was able to get it done quickly. Well done O! 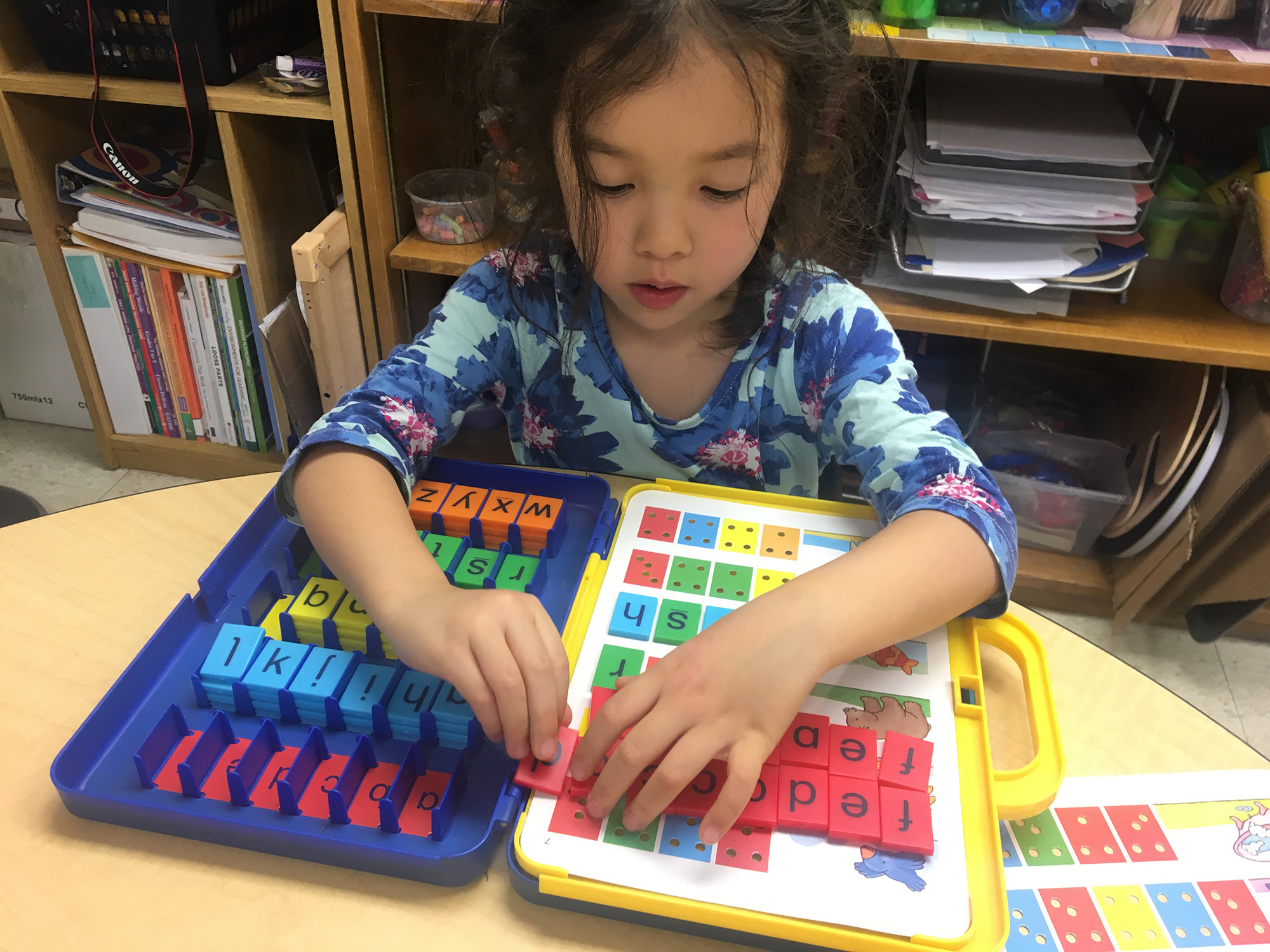 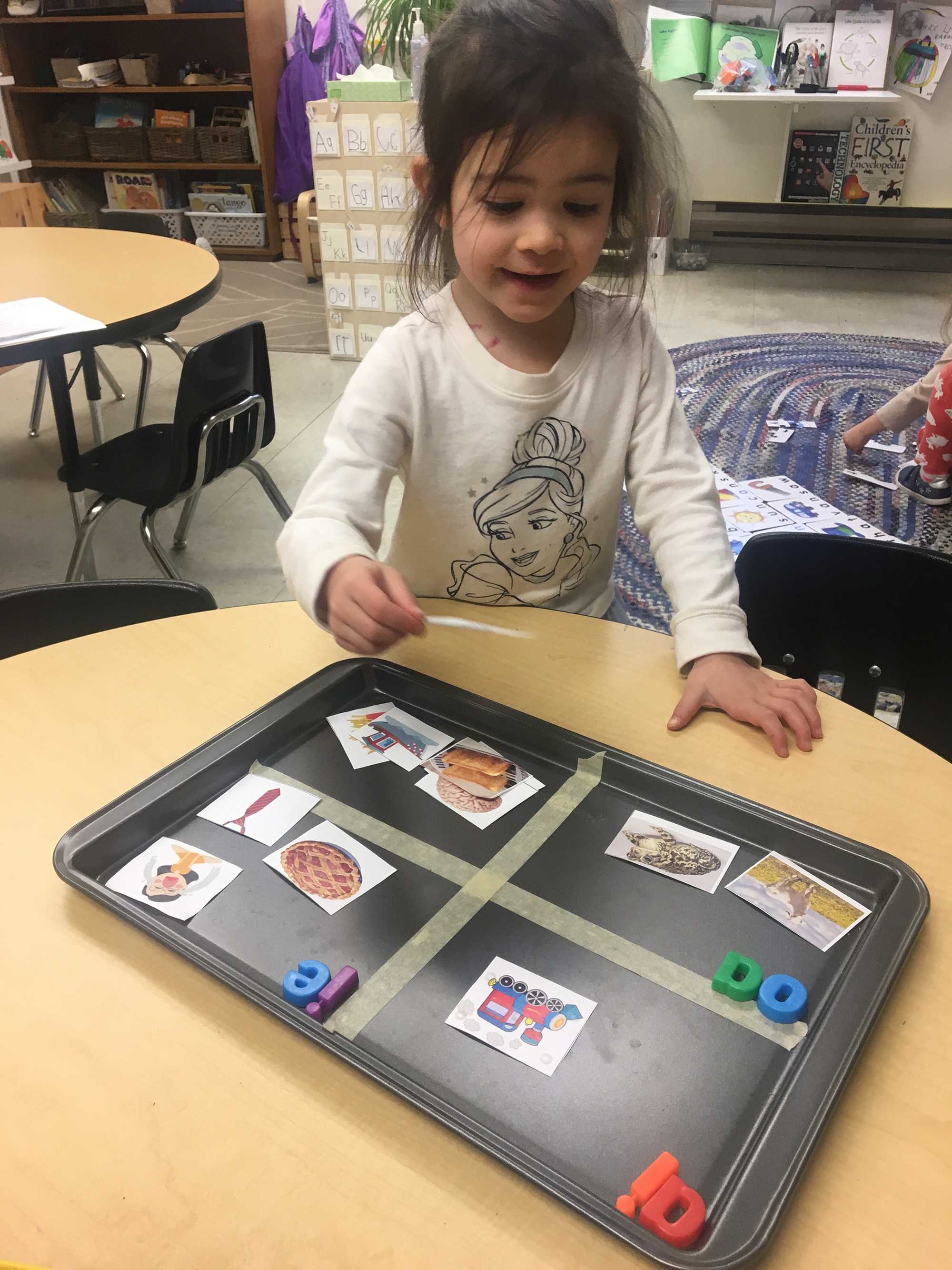 O sorts words based on three new and trickier vowel sounds we have been practicing together. Ask your girls to show you the actions that go with each sound.