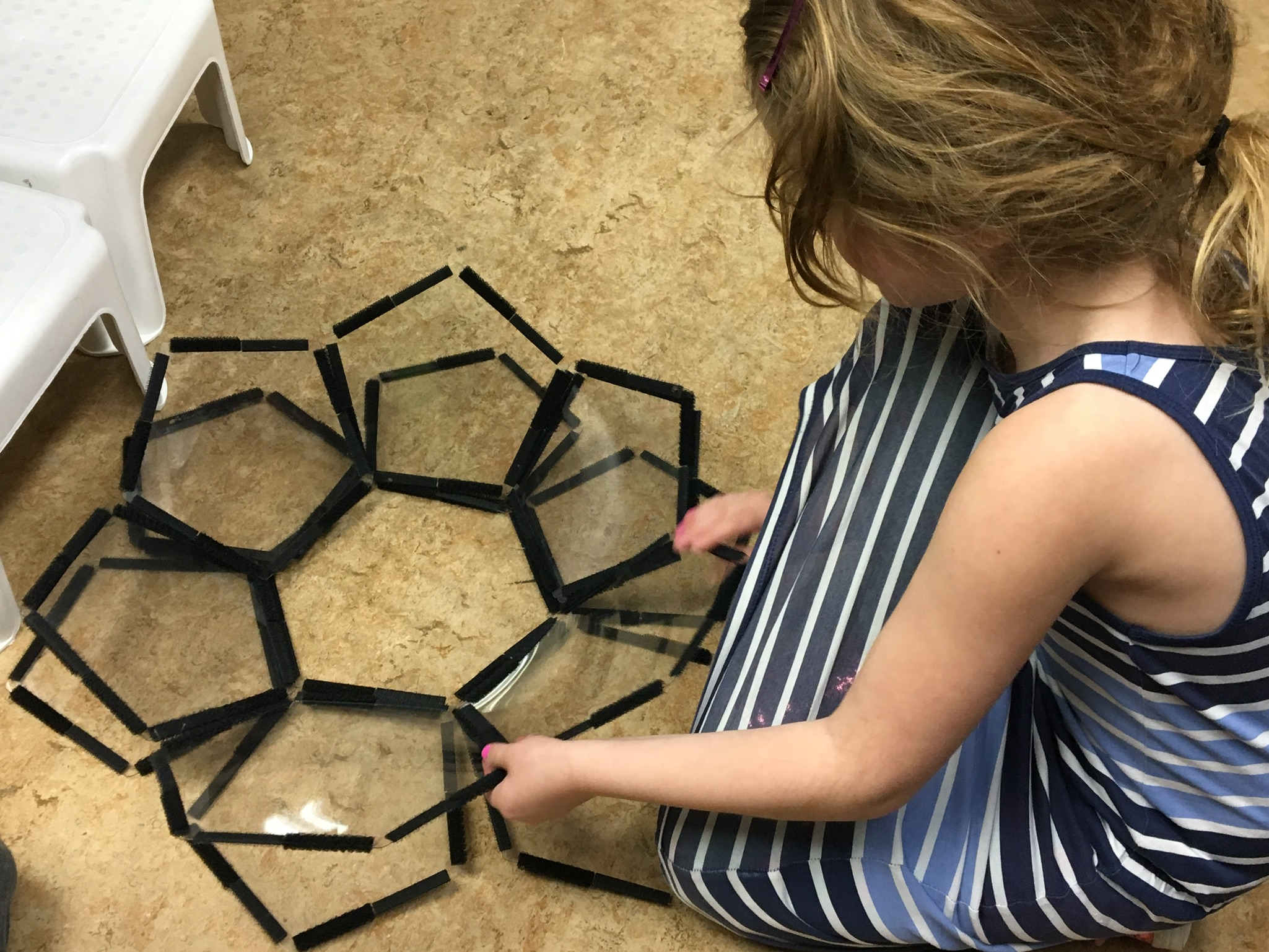 This short week was full of scientific inquiry. On Monday, we were invited into the science lab to join the Grade 11 Biology class as they began their fetal pig dissection unit. The Grade 1-2s who attended all identified interest in medical and veterinary careers. They enthusiastically helped the high school students measure their pigs to determine gestational age, identify the sex of the pig according to diagrams, and each prepared a diagram alongside their grade 11 buddy. At the end of the class, they were bubbling with excitement about future visits to the science lab. In CERES class, students experimented with different transparent shapes to create geometric structures. We also enjoyed collaborating with the Early Learners on a shared Valentine's Day centres period. And then on Thursday, after months of planning, hypothesizing, researching, experimenting, photographing, writing, cutting, problem solving, organizing, gluing, and practicing, the Grade 1-2s finally got the opportunity to showcase their terrific science fair projects to the broader Linden community. It was joyful to see such pride and confidence on the faces of our presenters and the girls received tremendous feedback on their clarity, scientific rigor, and enthusiasm for their chosen topics. 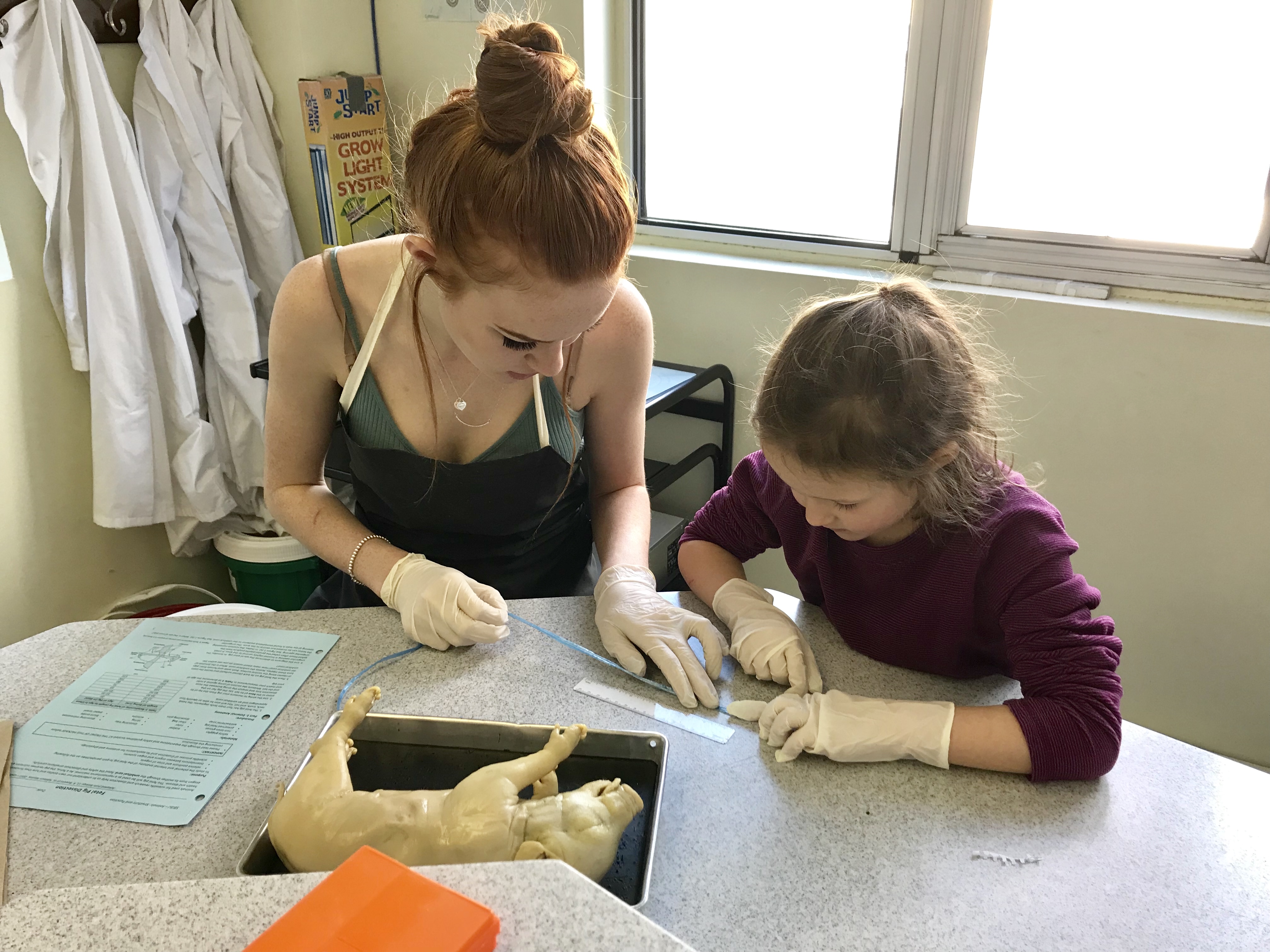 K made quite the entrance when she sat down beside R and announced "I'm an aspiring veterinarian!". She helps R measure the length of their pig and proudly differentiates between centimetres and inches using the finger trick she learned in math class. 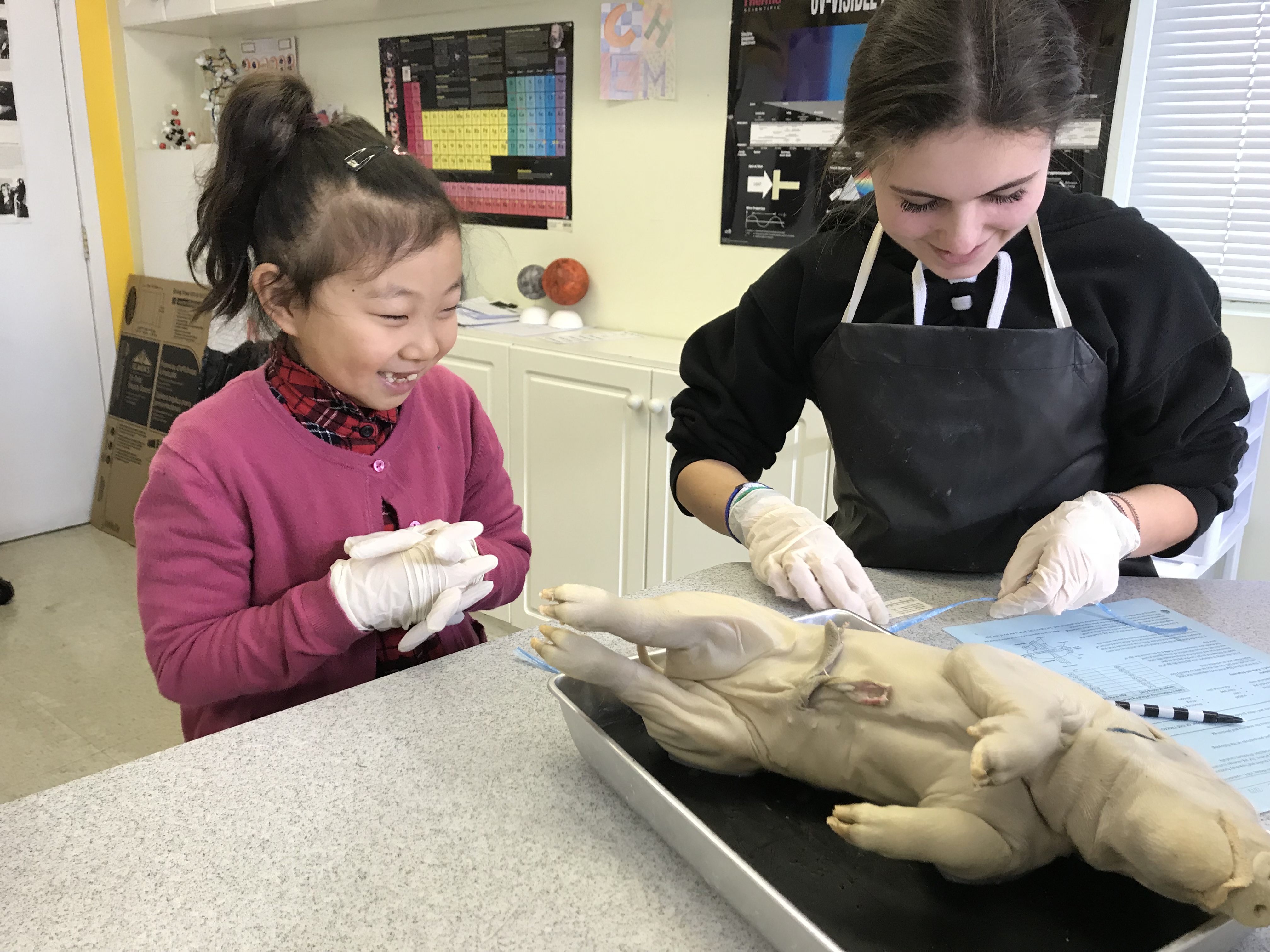 M gleefully celebrates when she discovers that their pig is female. "That's good because this is Linden!", she says. 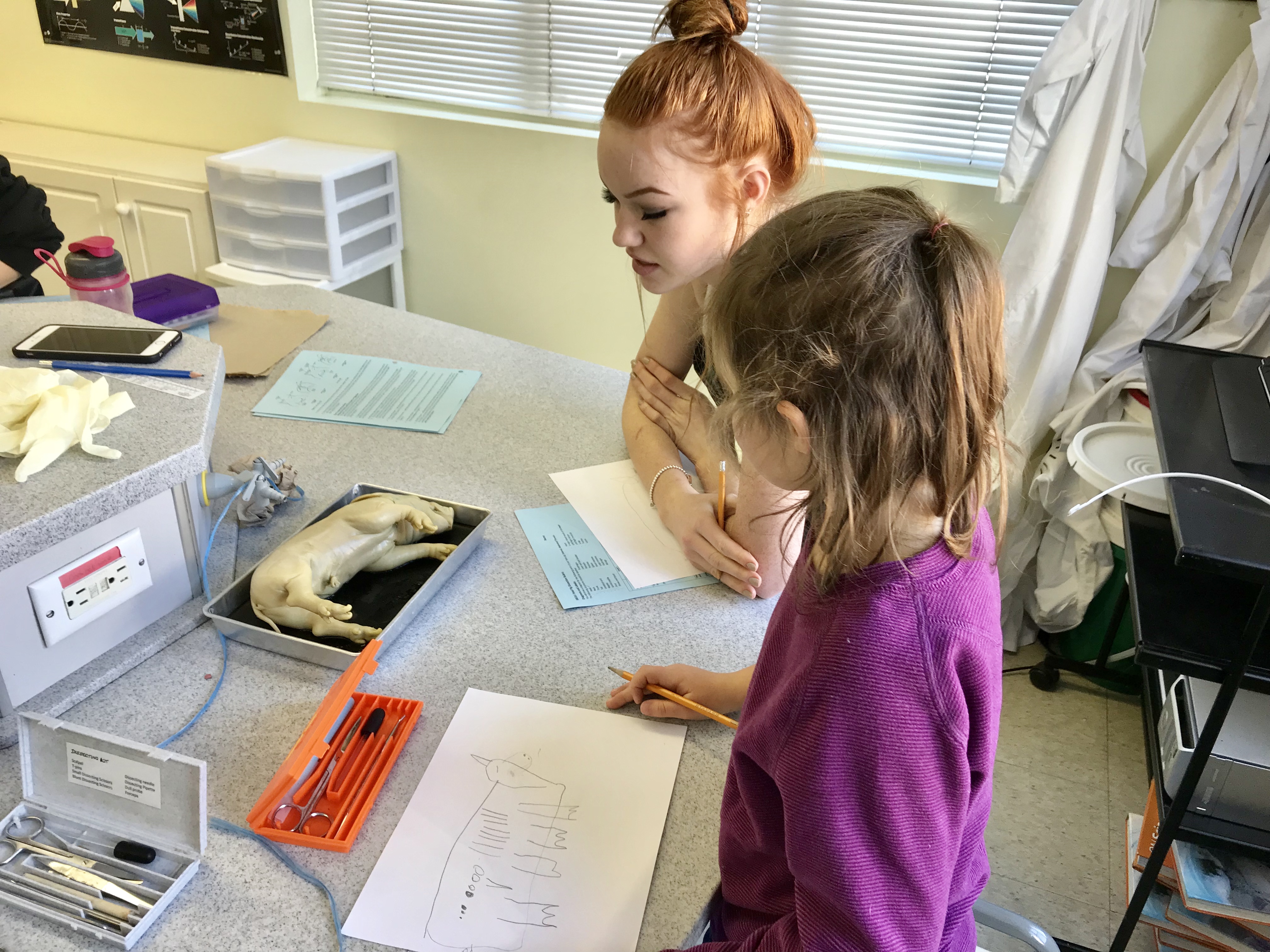 K and R take time to create diagrams that capture all the details of their pig specimen. R tells K how she plans to label the diagram based on the lab assignment requirements. 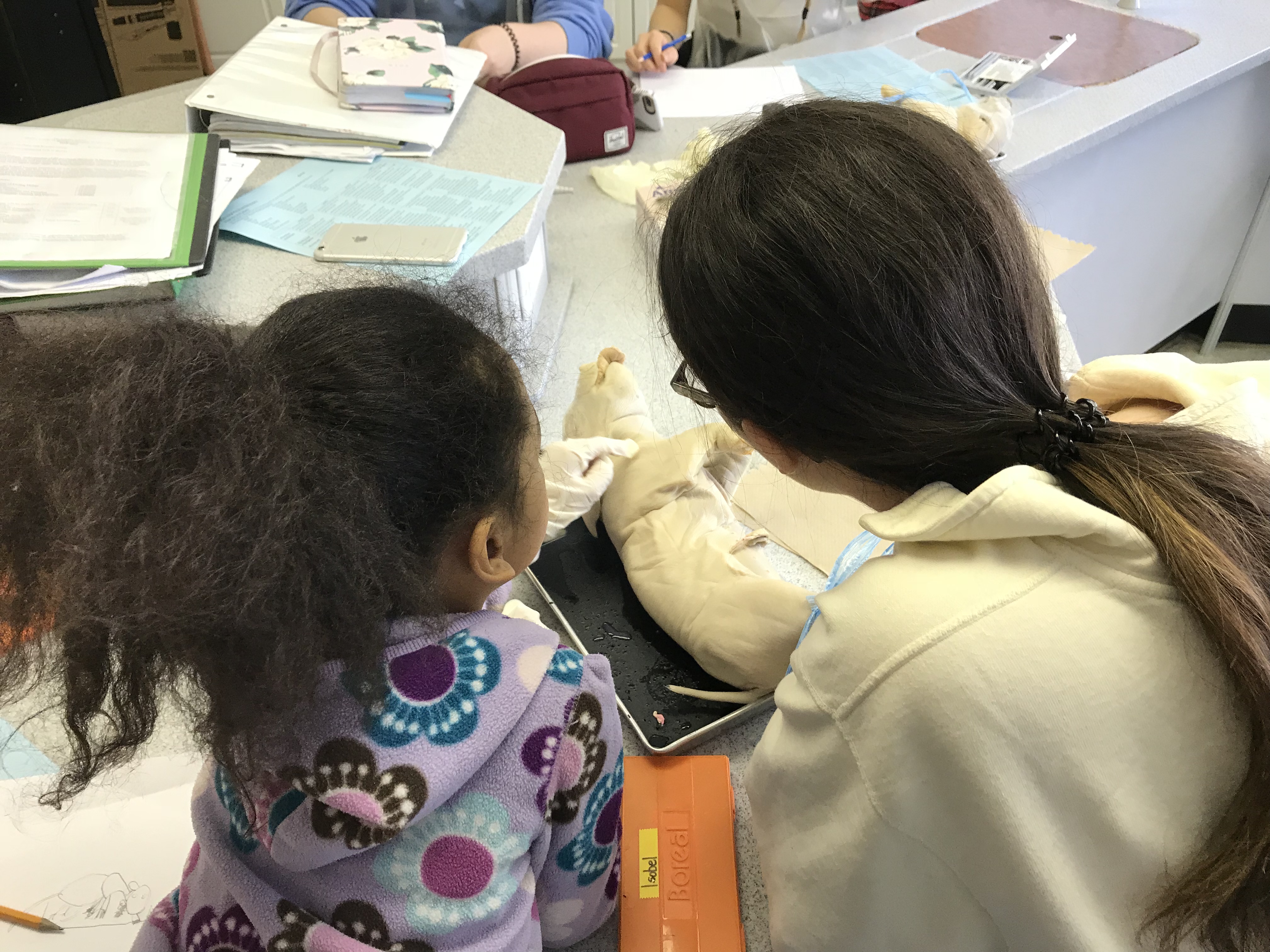 Z is far less squeamish than her grade 11 buddy and enjoys using her gloved hand to ask many thoughtful questions about the pig specimen. 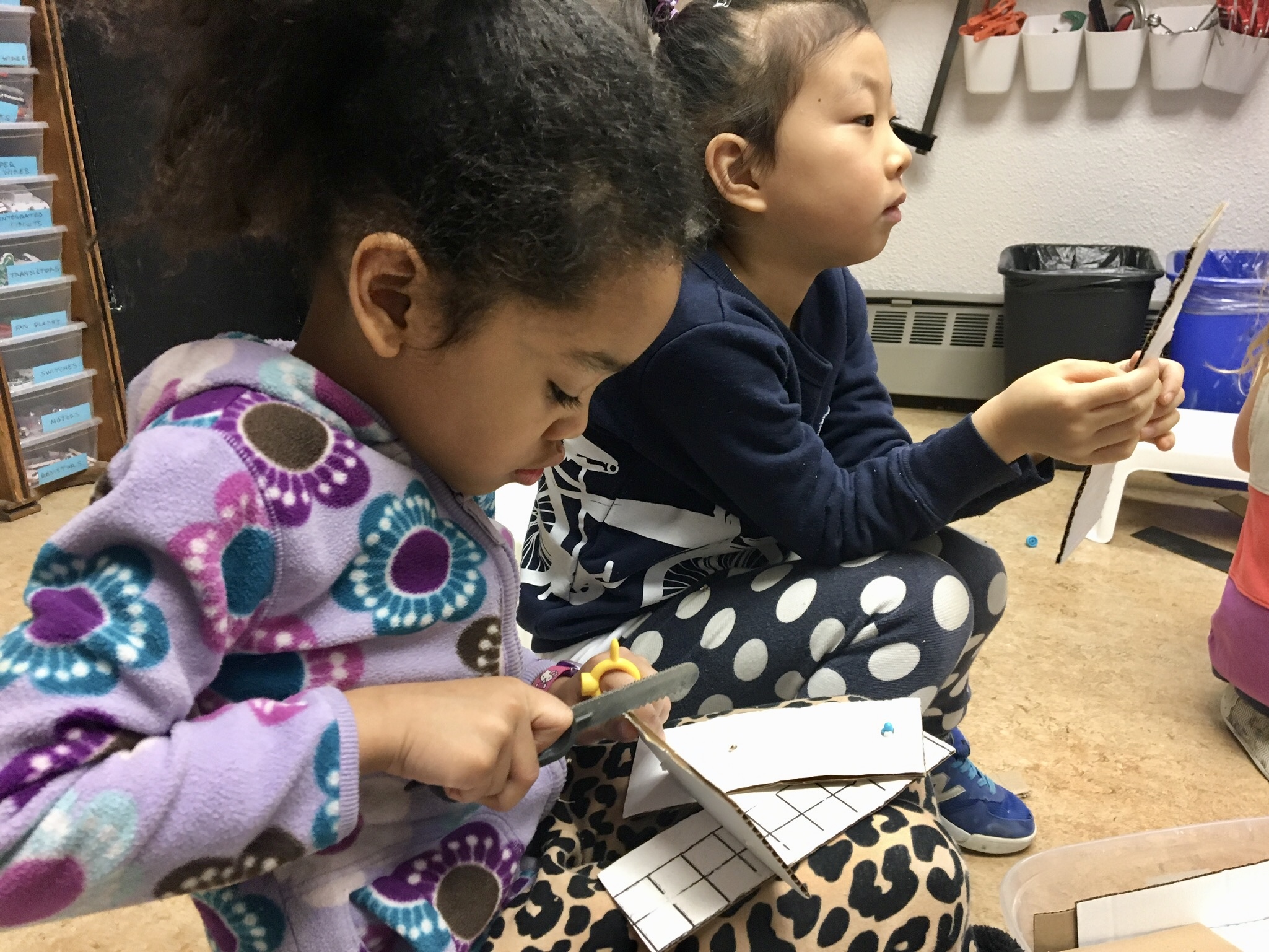 Z and M worked together in CERES to make cardboard structures with Makedo. 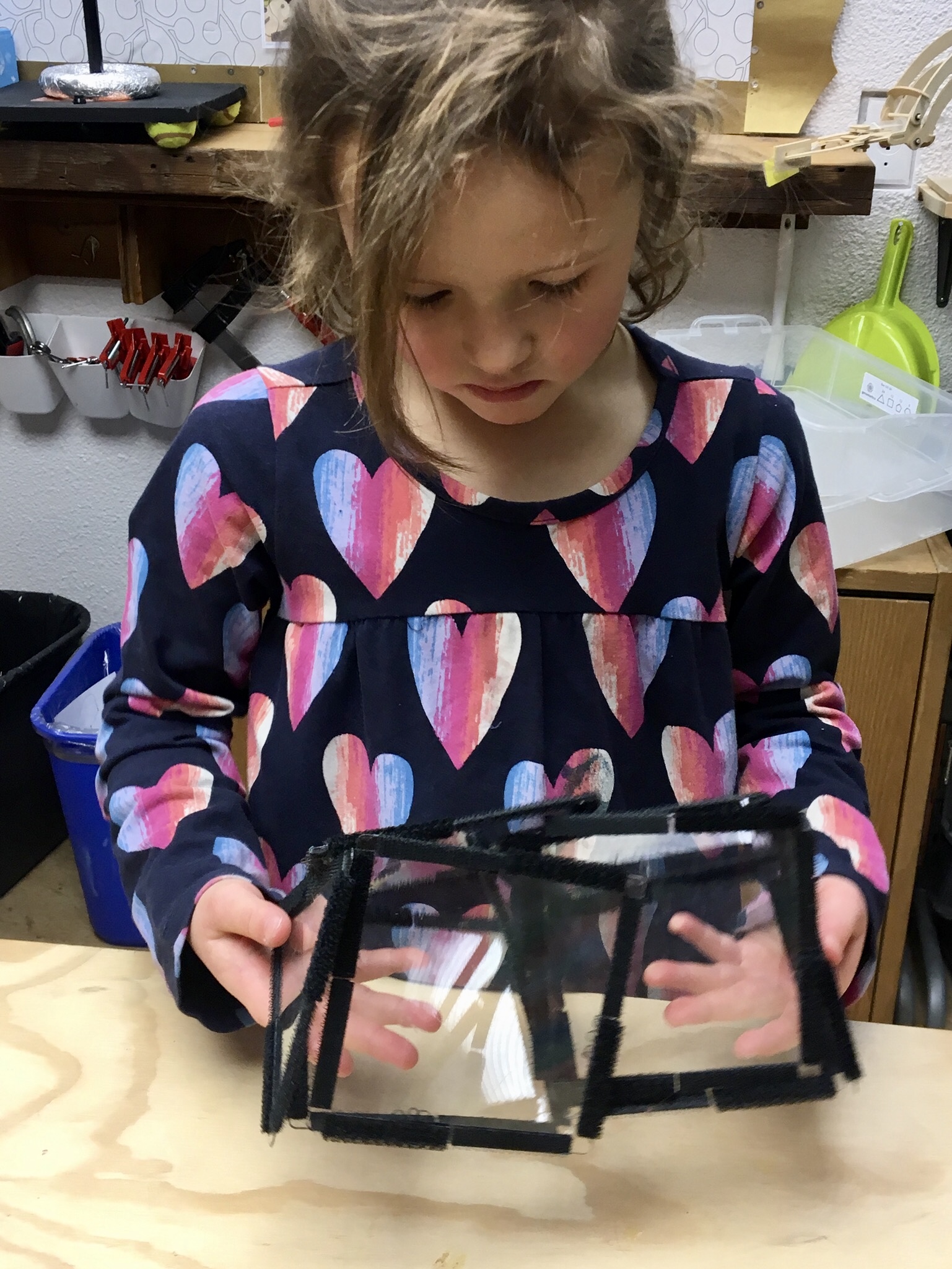 K uses trial and error to join a series of shapes into a cube. She then laughs when she discovers the cube can go over her head and that she can still see through it. 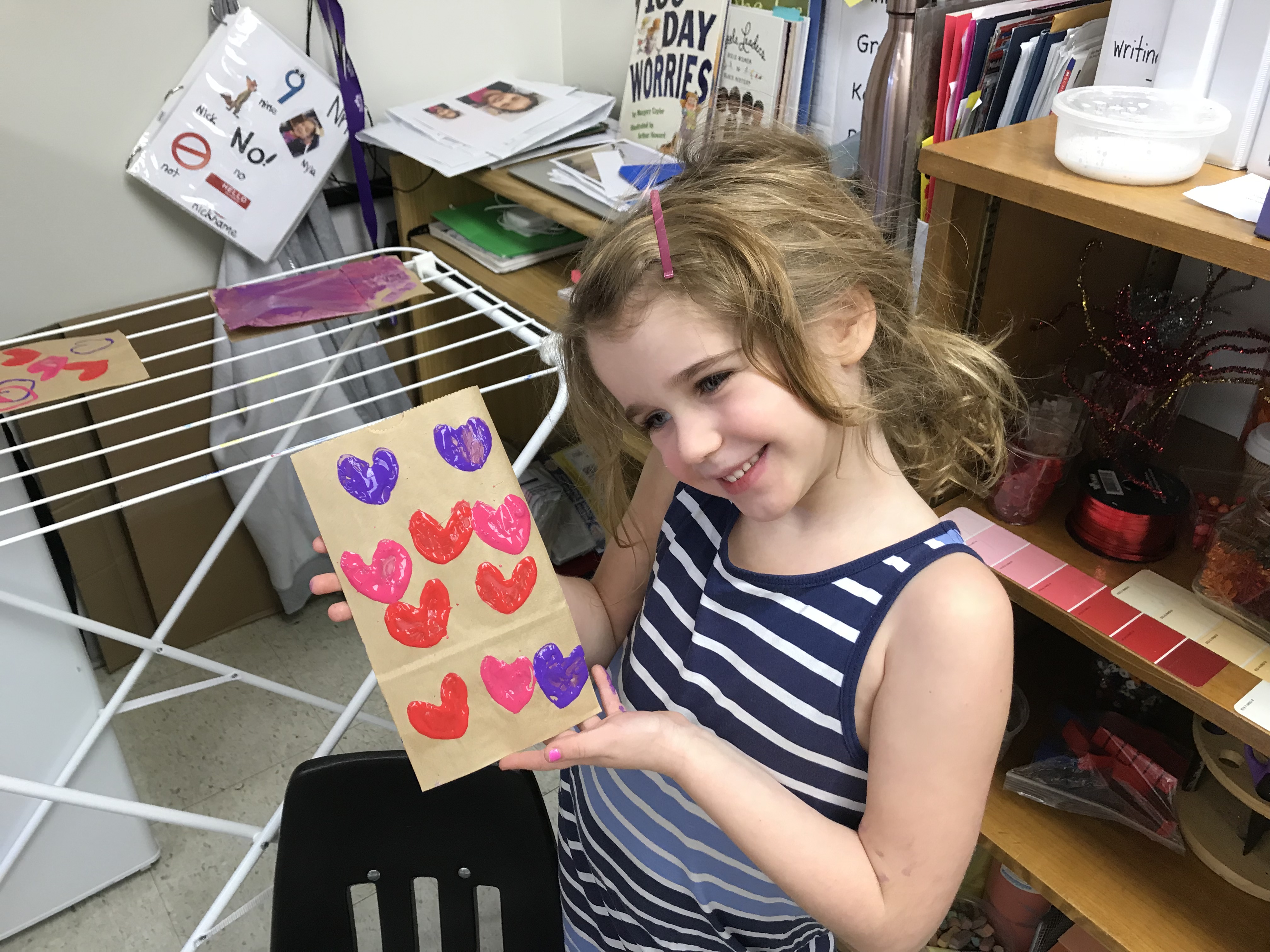 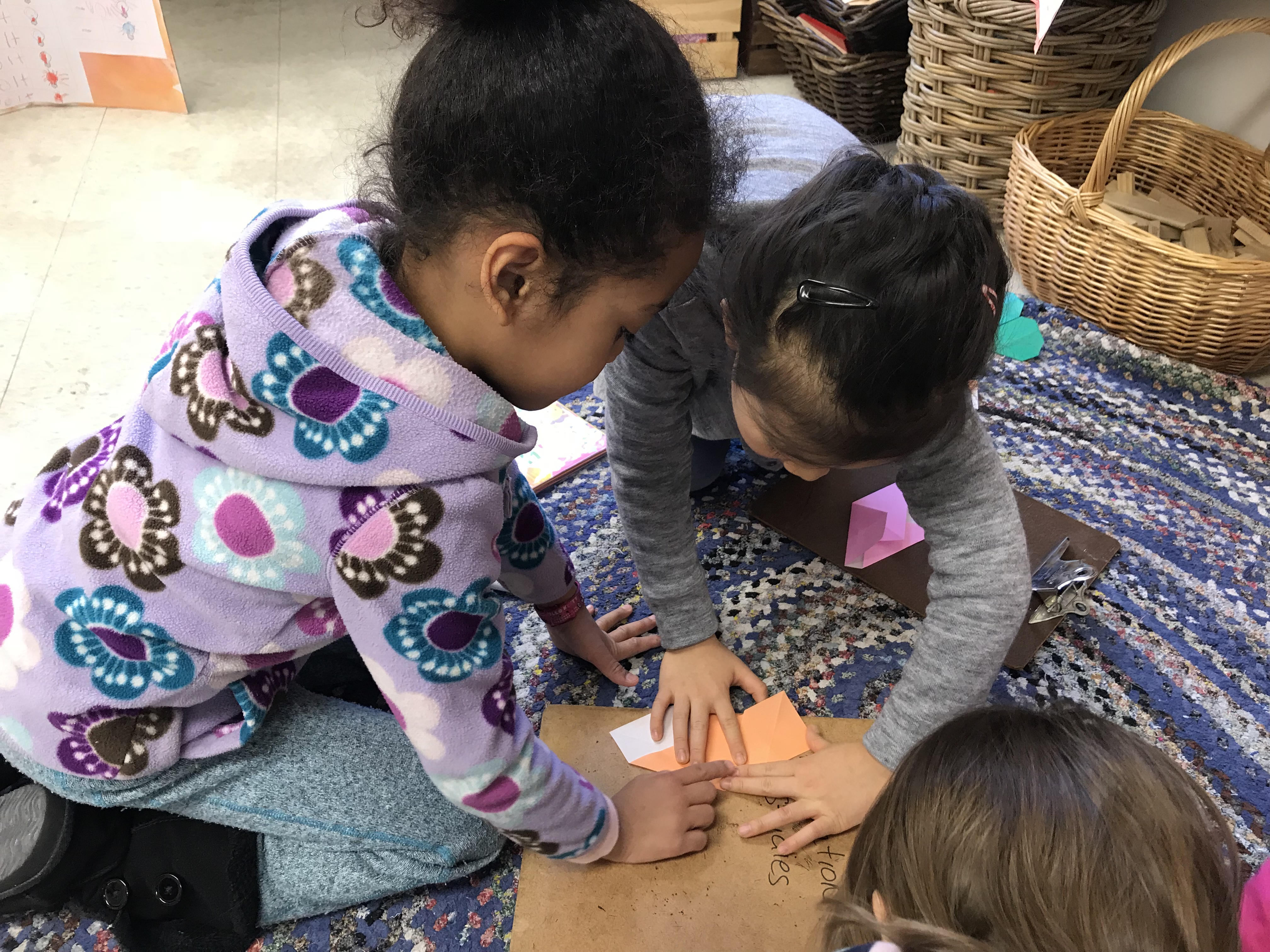 M teaches her classmates how to make origami hearts on Valentine's Day. 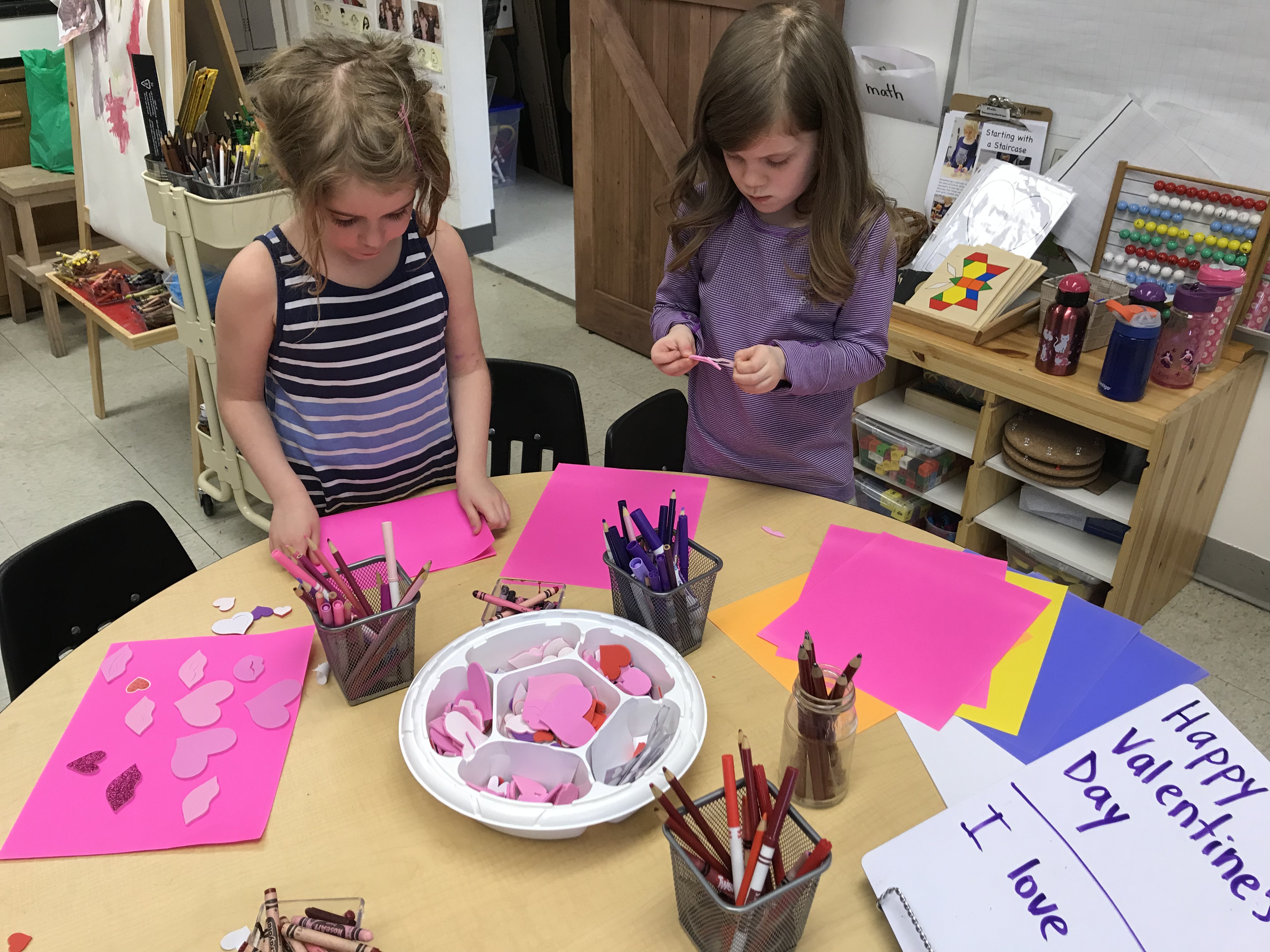 M and G make cards for their loved ones during our shared centres period. 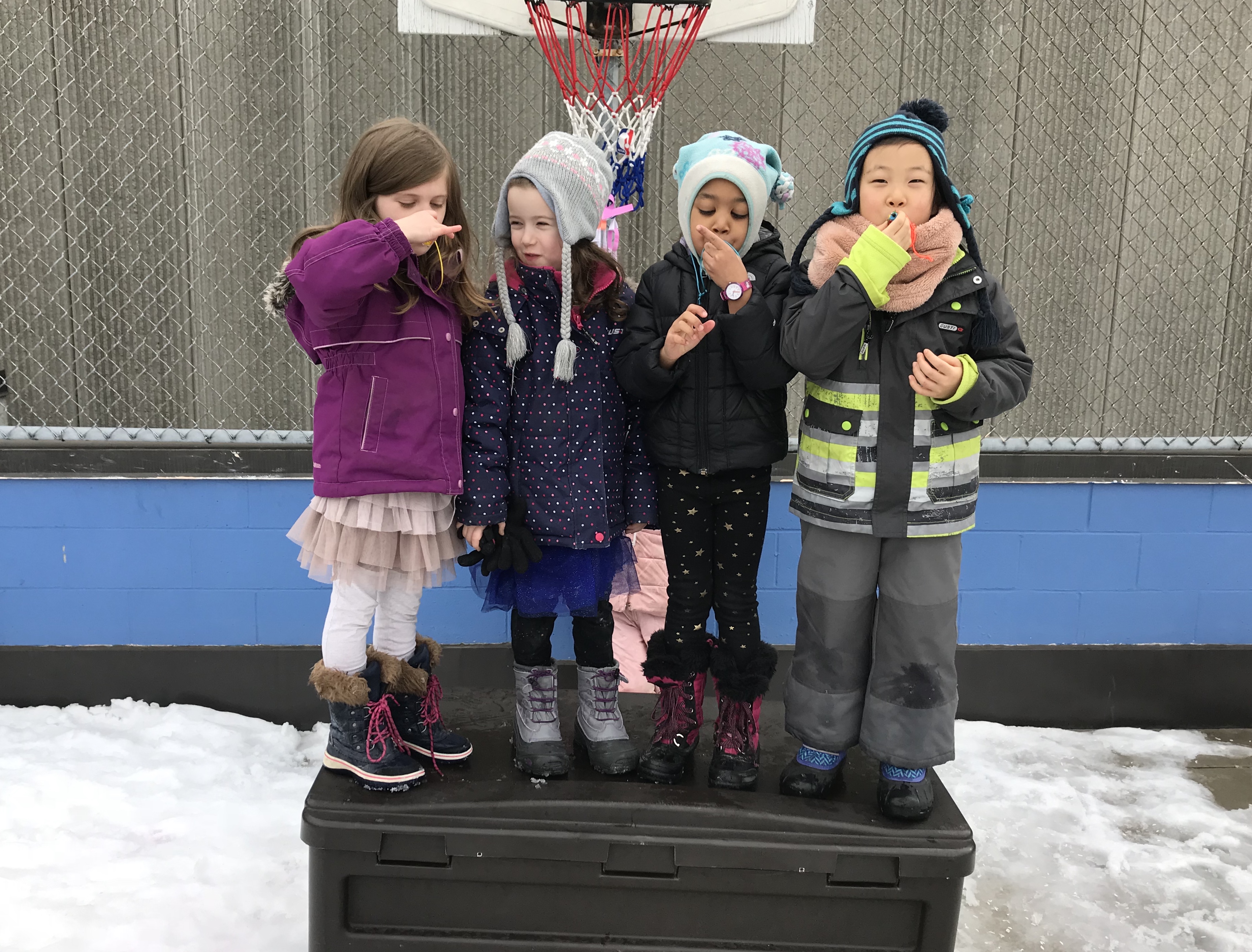 G, K, Z, and M enjoy testing out the bird whistles that S brought back as gifts from her time in Costa Rica. 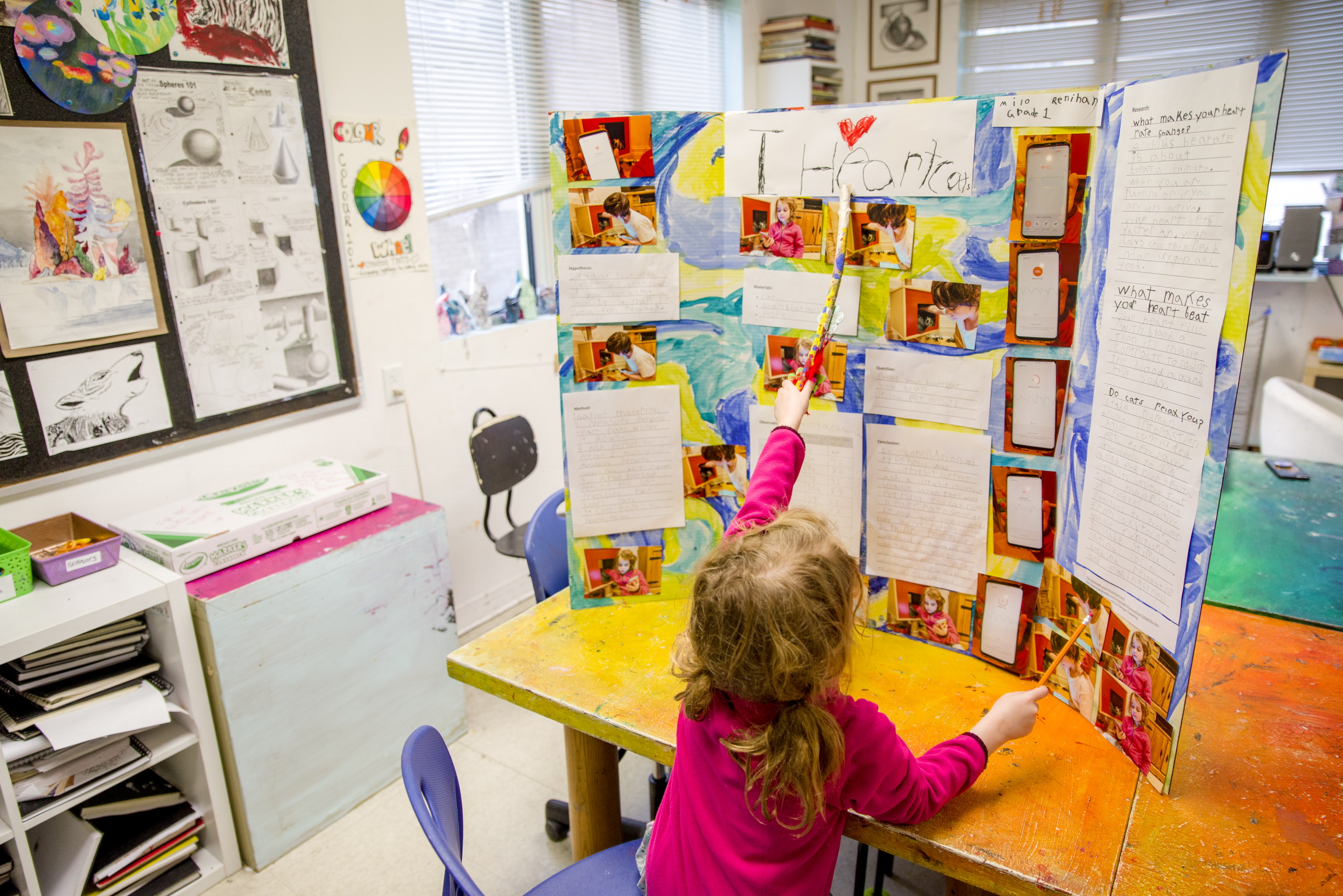 M reads some of the favourite parts of her science fair project called "I Heart Cats". She tested whether people's heart rates went down when they pet cats and discovered that they actually went up during the petting. M thought that this might have been because they were excited or nervous about cats. 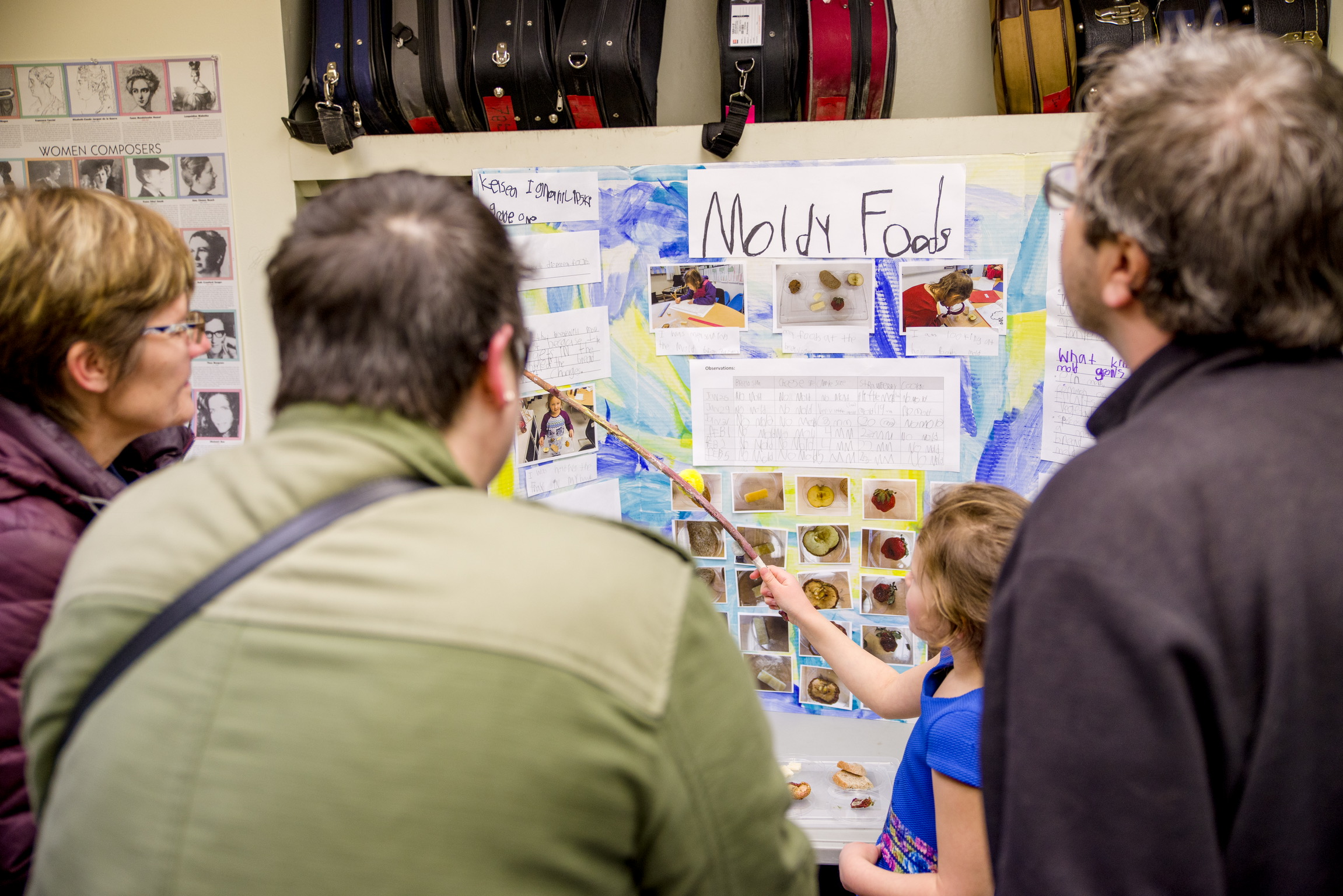 K presents her project to willing listeners during the Linden Science & Technology Fair. She tested which foods would mold the quickest and discovered that foods with a lot of moisture, like strawberries, produced mold the fastest. 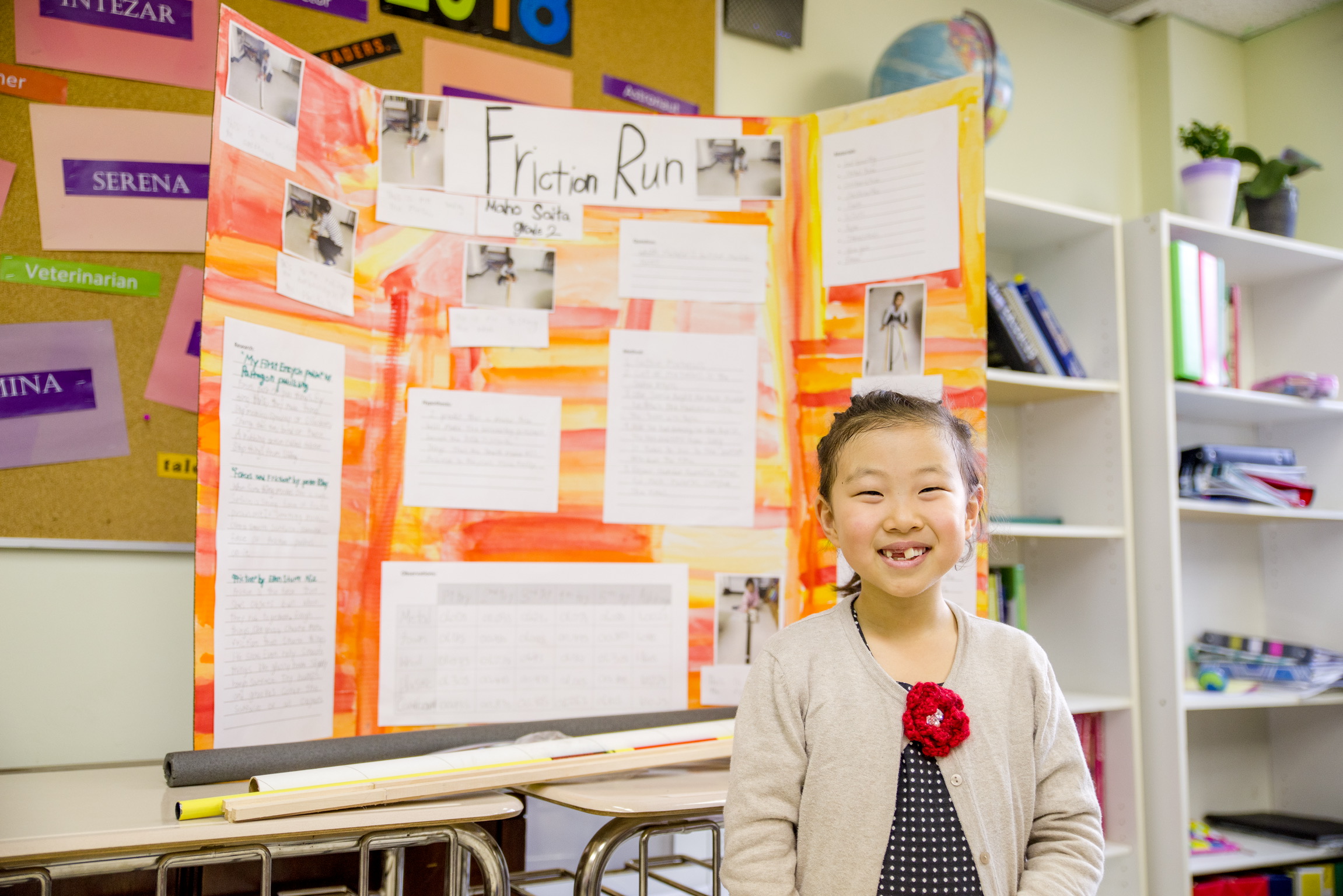 Inspired by her work in CERES class, M designed her science fair project around marble runs. She tested which materials would allow her ball bearing to roll fastest and did a lot of great learning about friction. 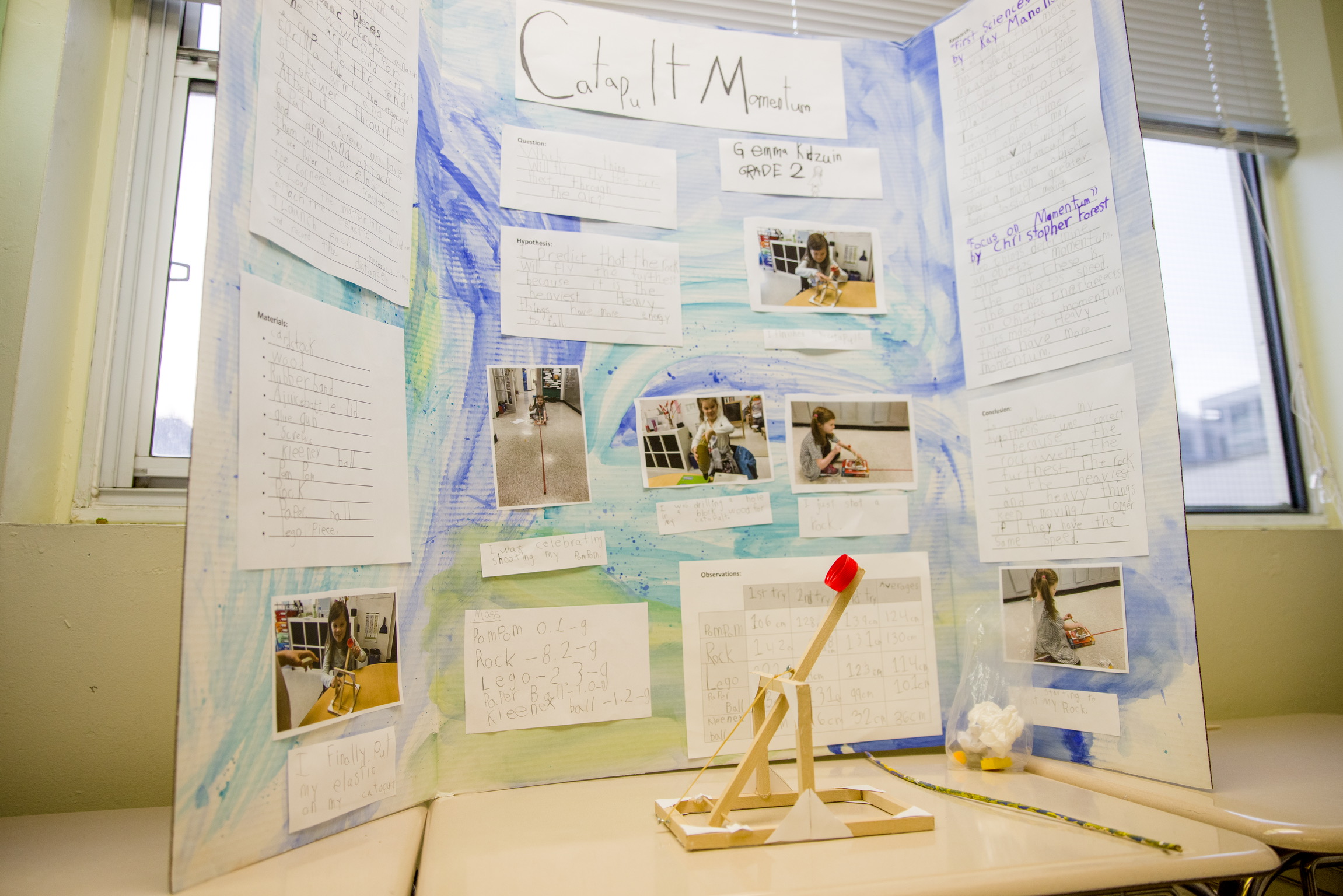 G built a catapult and then tested whether objects of a greater mass travelled further when launched through the air and proudly spoke to her listeners about momentum. 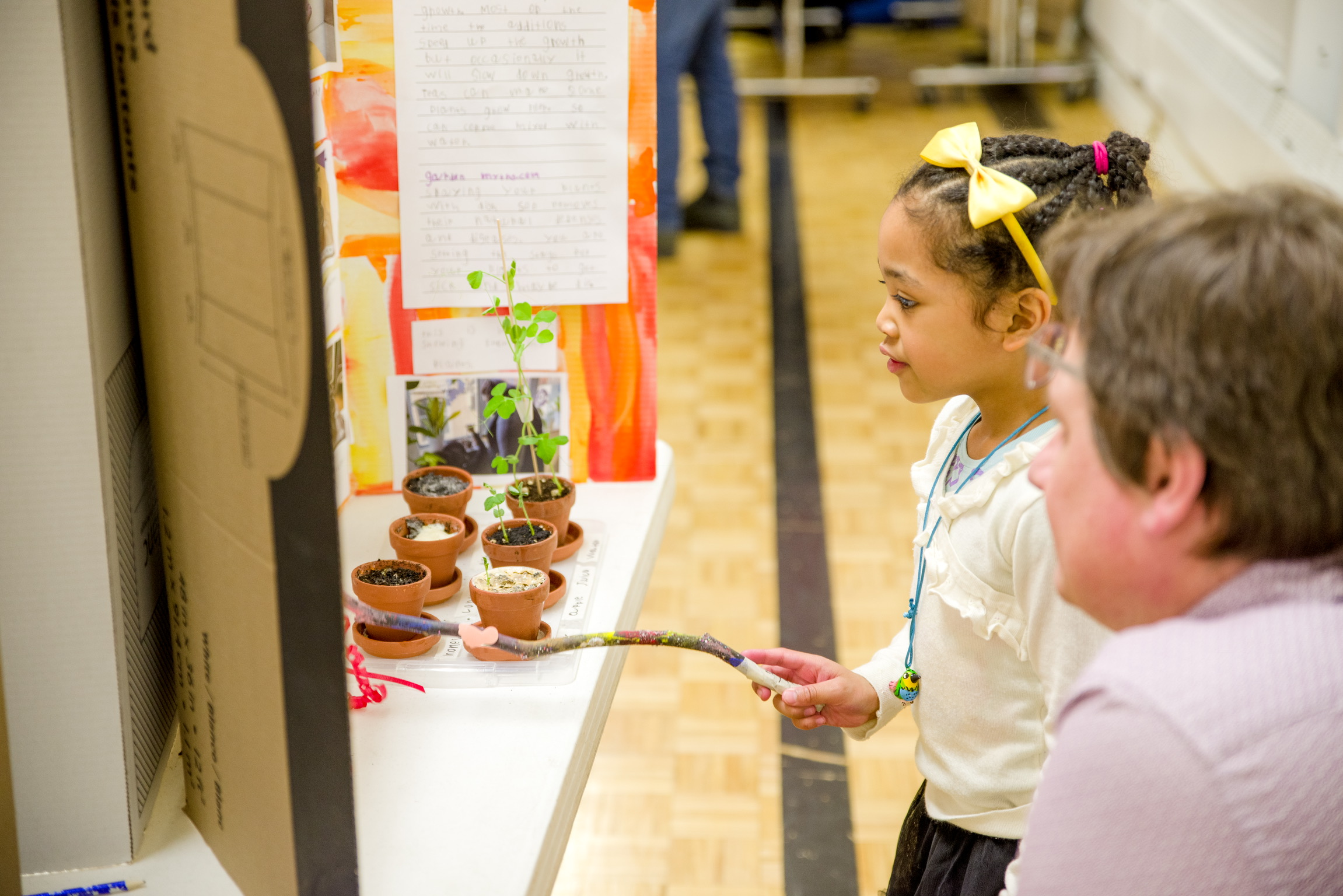 Z presents her science fair project to a listener. She planted pea seeds in soil and then "watered" them with different liquids to see which produced the tallest plant.