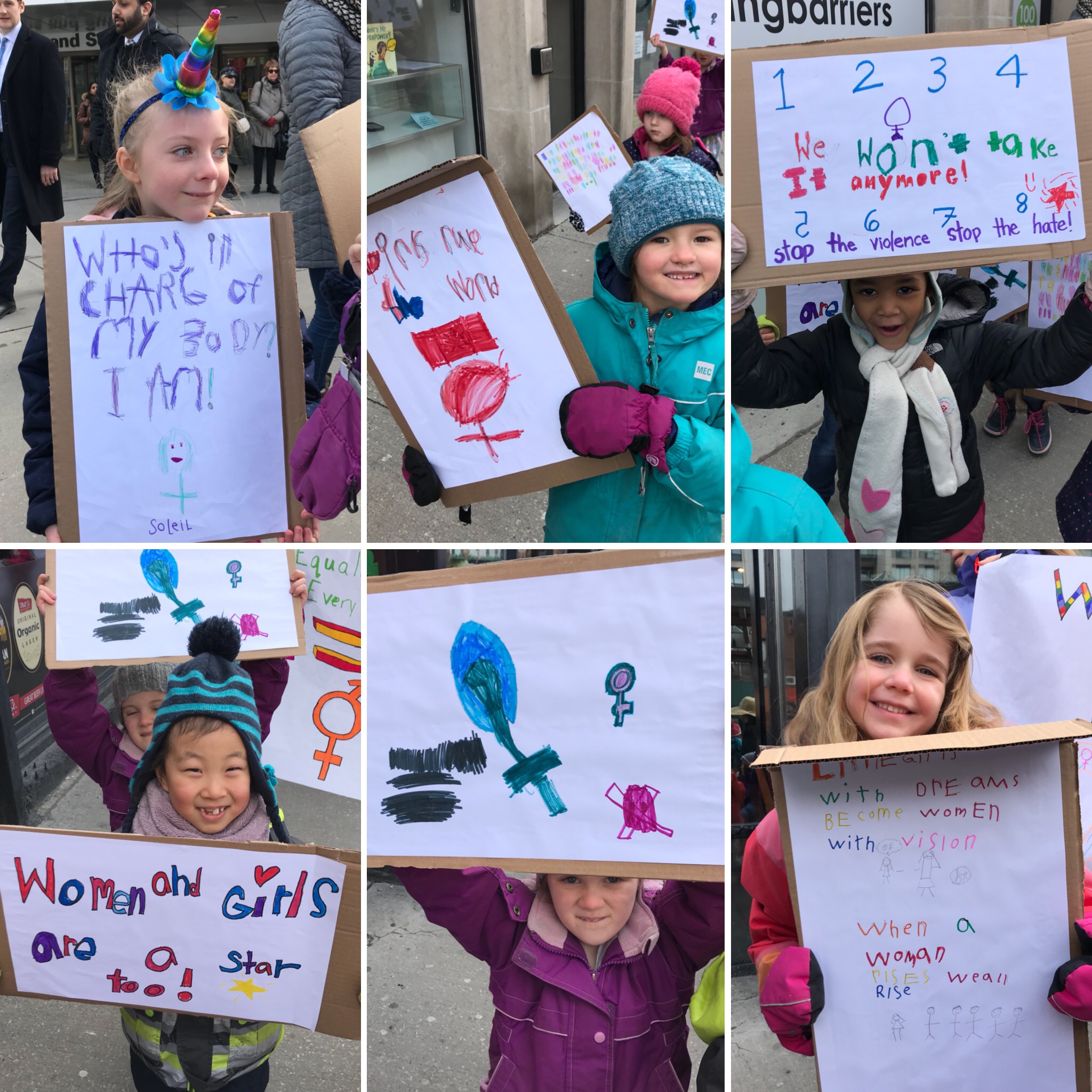 In the week leading up to March Break, the Grade 1-2s had a very active five days together! We took a trip to the Ontario Science Centre to celebrate all of their hard work in preparing individual experiments for the annual Linden Science & Technology Fair. Students participated in a dynamic workshop on simple machines in which they used different machines to make work easier and learned to differentiate between gears, levers, pulleys, wheels, and inclined planes. They used a lever to lift a classmate and even used one to lift their own teacher! The KidSpark area was a  major hit with the class and we also enjoyed looking at all the creatures in the Living Earth exhibit. In Cooking Club this week, we made okonomiyaki at the request of a Grade 2 club member. It was a new dish to almost all the students there and there were many happy tummies. In math, students continued to build their skills in multi-digit addition and especially enjoyed the challenge of creating five problems for a friend. Many exclaimed "I'm like the teacher!" and enjoyed selecting a coloured pen to mark their classmate's finished work. Thursday was International Women's Day and the girls learned about the significance of the day, both in celebrating all that is special about girls and women as well as taking time to recognize some of the ways in which we are still not treated equally. The Grade 1-2s wrote about why they liked being a girl and then drew inspiration from signs used at other IWD marches to create their own signs for Linden's own IWD march, which took place with the whole school. It was also a high-energy week with Linden's annual spirit week celebrations. On Thursday, students dressed up on beachwear and on Friday, they came as characters from Where's Waldo. Friday wrapped up with a lip sync battle in which the Grade 1-2s and Early Learners performed a self-choreographed routine to "Timber". They were also over the moon when they took the prize for having the best spirit week costumes. Have a wonderful and restful March Break! 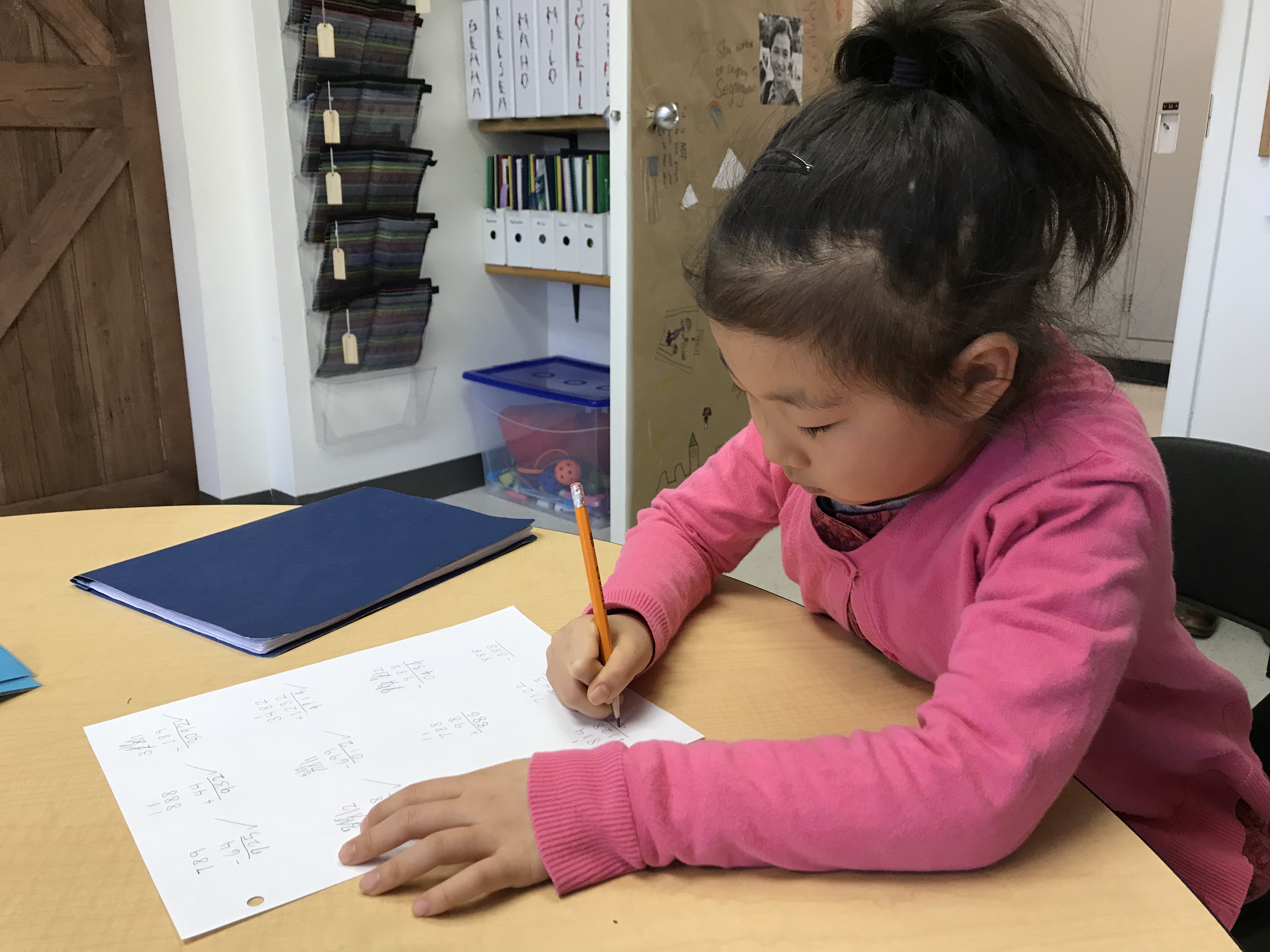 M is working on both carrying and borrowing and enjoyed "being the teacher" and marking the work of a peer. She is currently practicing borrowing across multiple digits (i.e. 2000 - 1987). 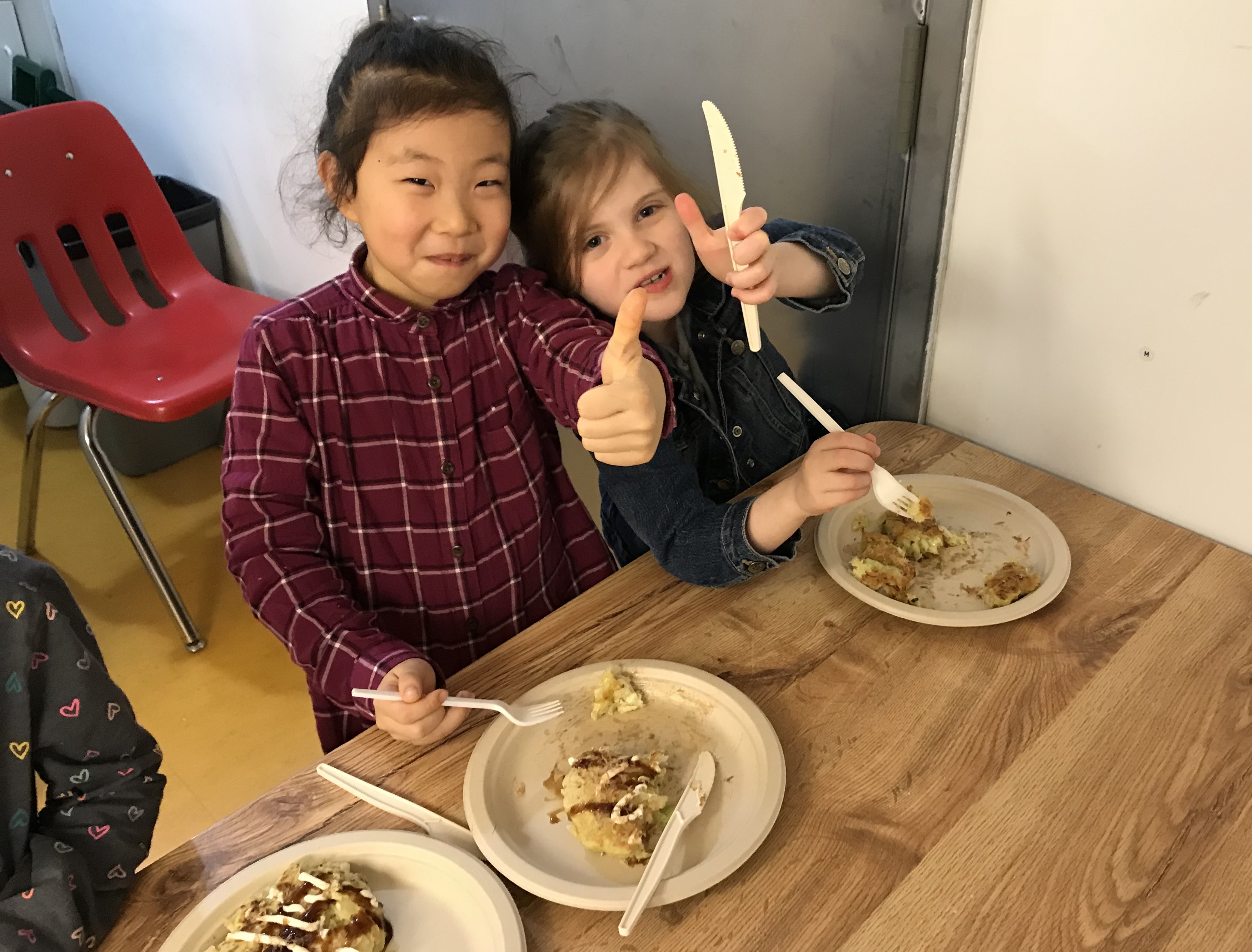 The okonomiyaki was a big hit with M and G. G loved "watching the flakes dance" on top of the dish when it was all assembled. 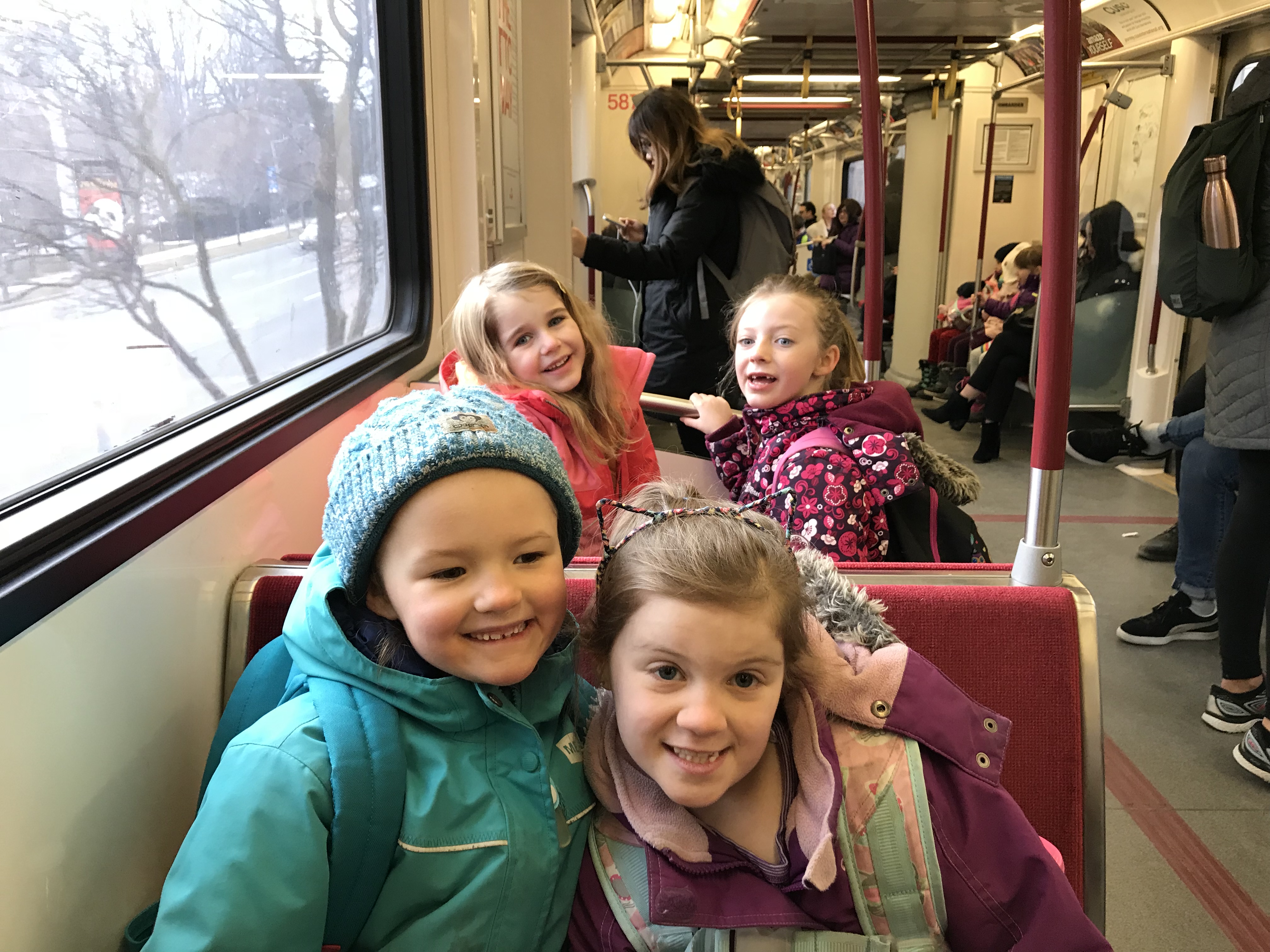 G, K, M, and S are ready for the day at the Ontario Science Centre! The Grade 1-2s are subway safety experts and model great transit etiquette on the busy subways and buses. 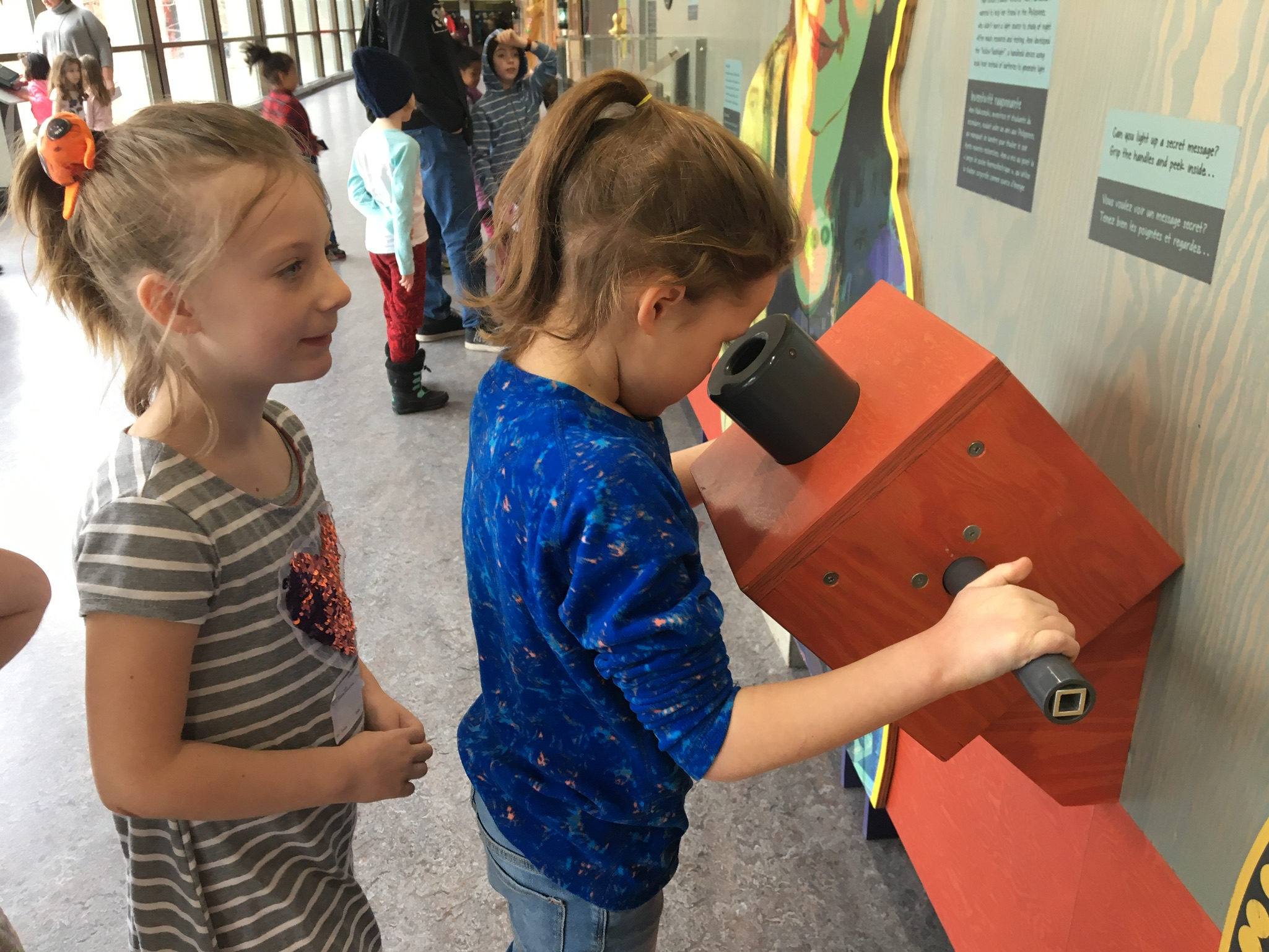 S waits patiently while K takes her turn lighting up the secret message in the viewing box. The Science Centre has so much to see that we could have easily spent the whole day in this one hallway! 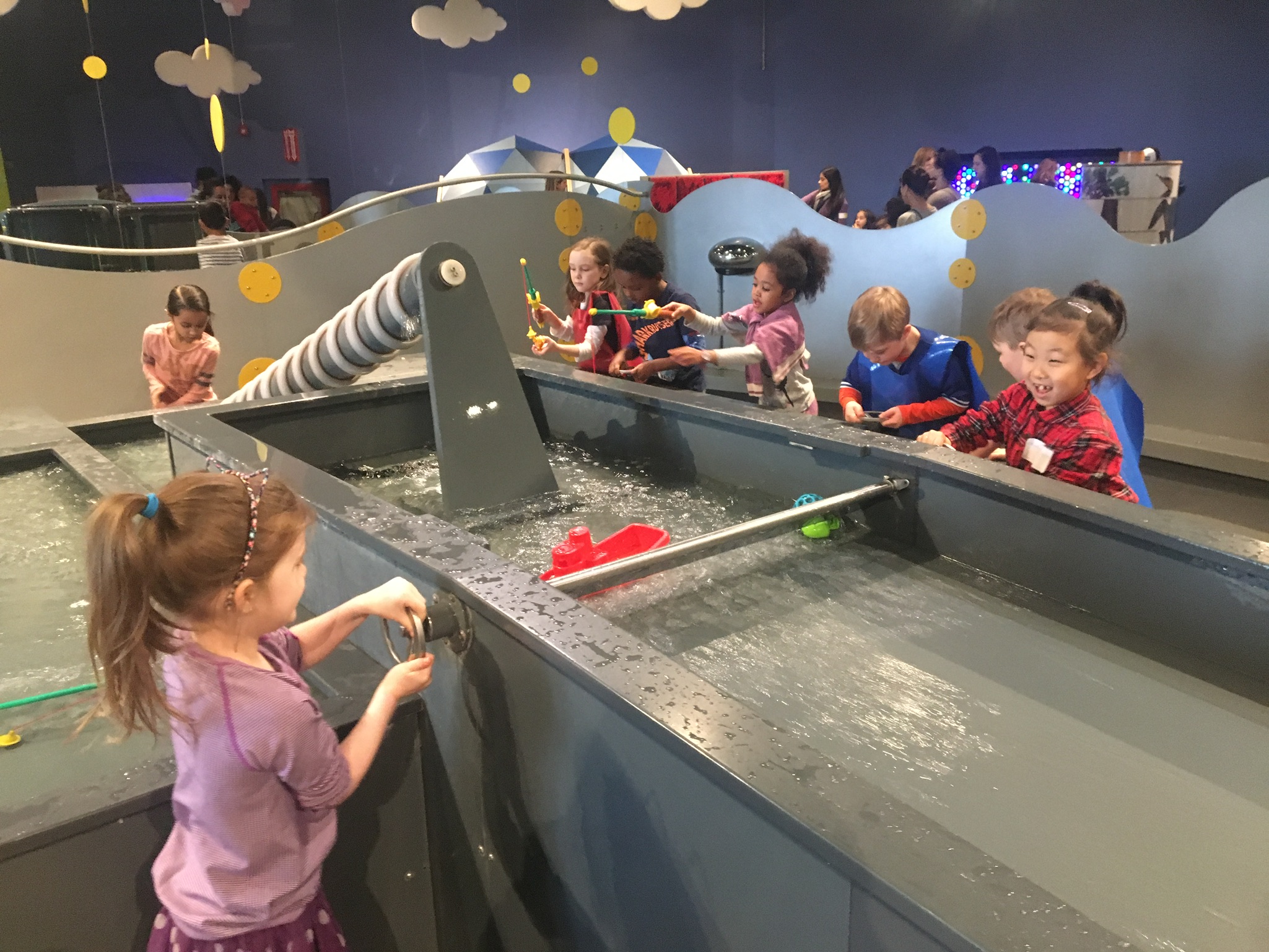 G and M enjoy playing at the water table in KidSpark. 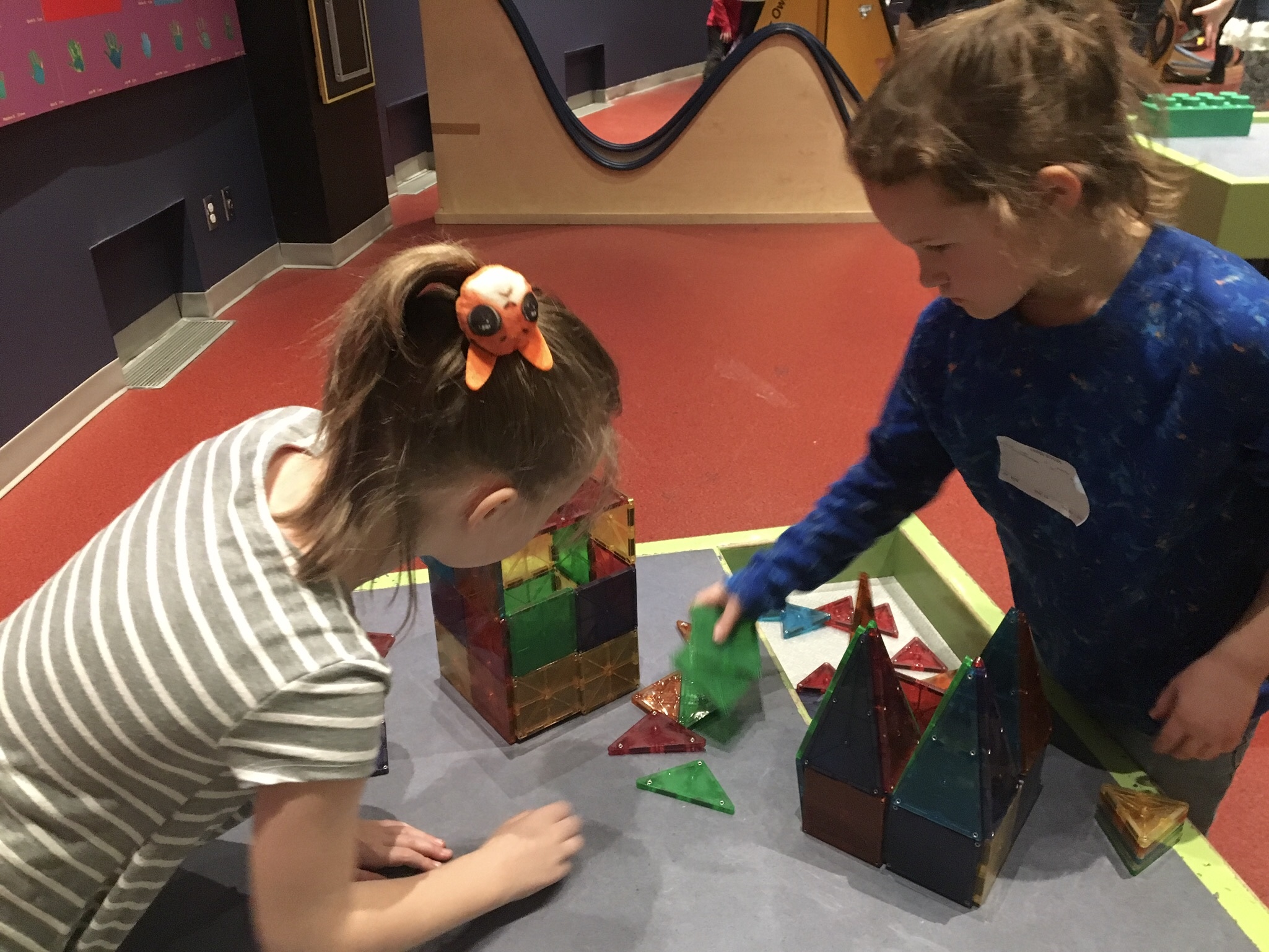 S and K enjoy building with a familiar material from their Early Learning classroom. The magnatiles can be used to make all kinds of great structures! 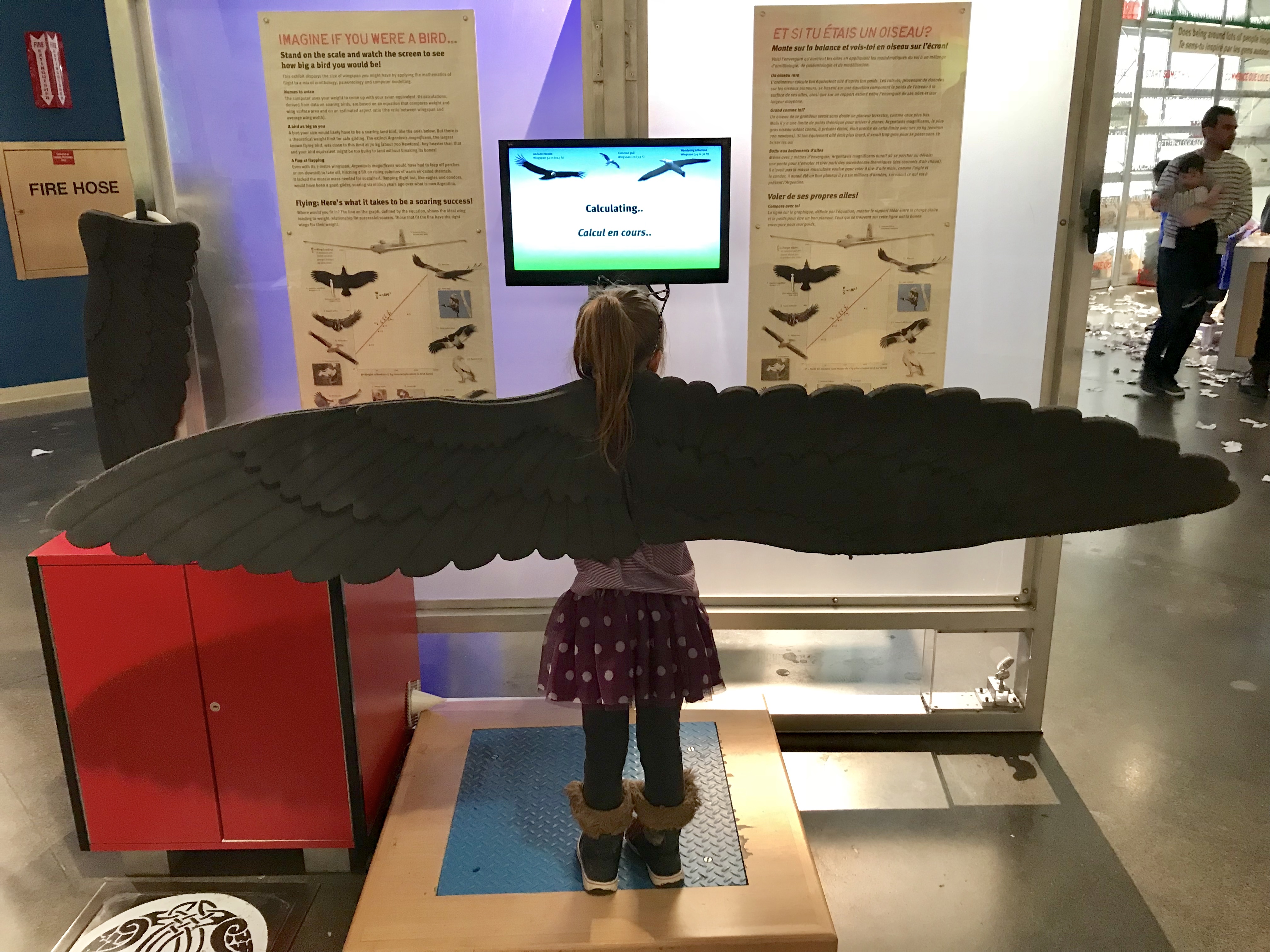 G learns about why birds need such a massive wingspan in comparison to their body before trying on a pair of her own and measuring her wingspan. 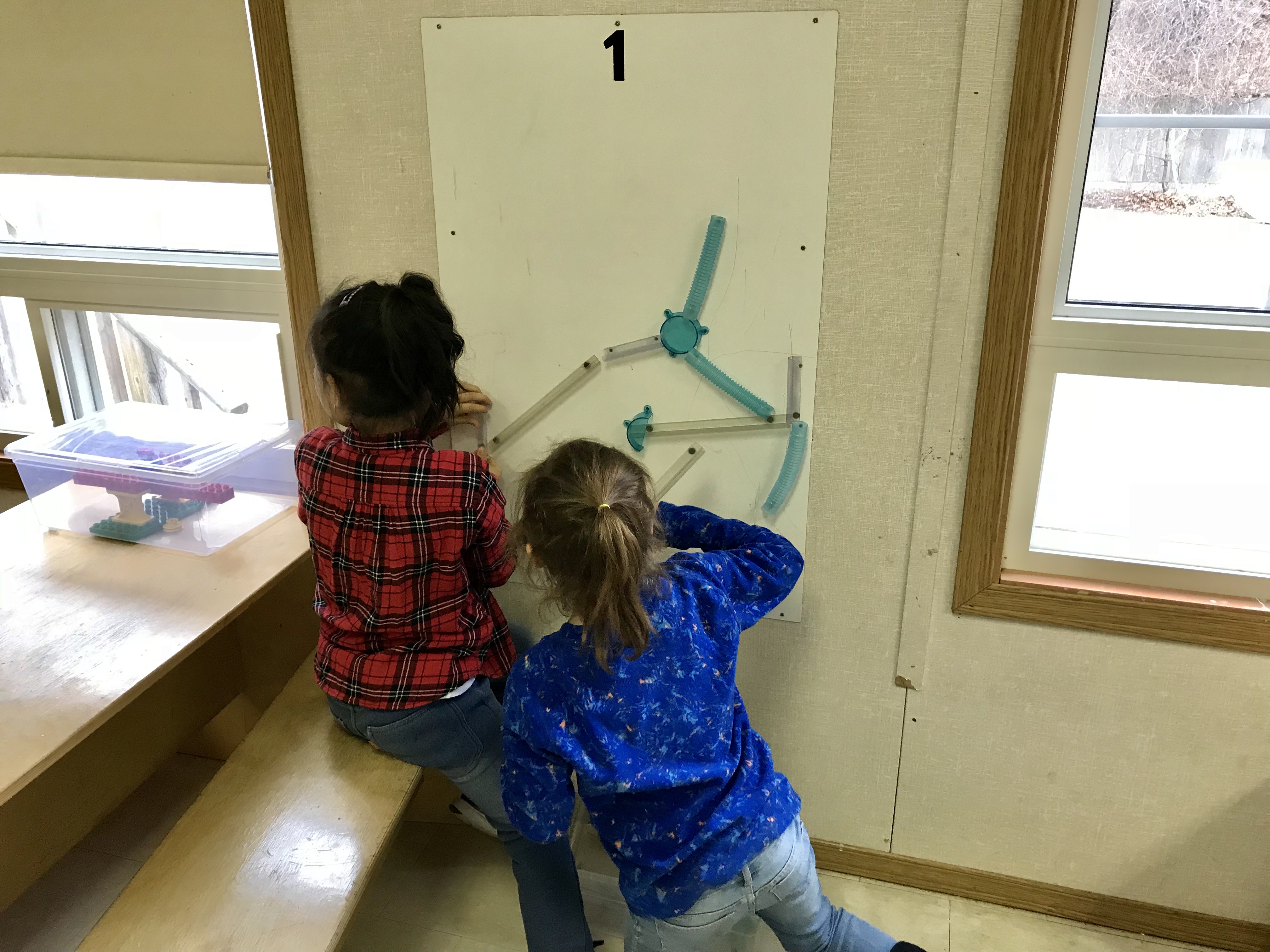 In our simple machines workshop, M and K work together to use inclined planes to move a marble down a marble run. The instructor challenged them to keep their marble moving in the track for more than a minute (her personal record) and it proves to be a challenging task. 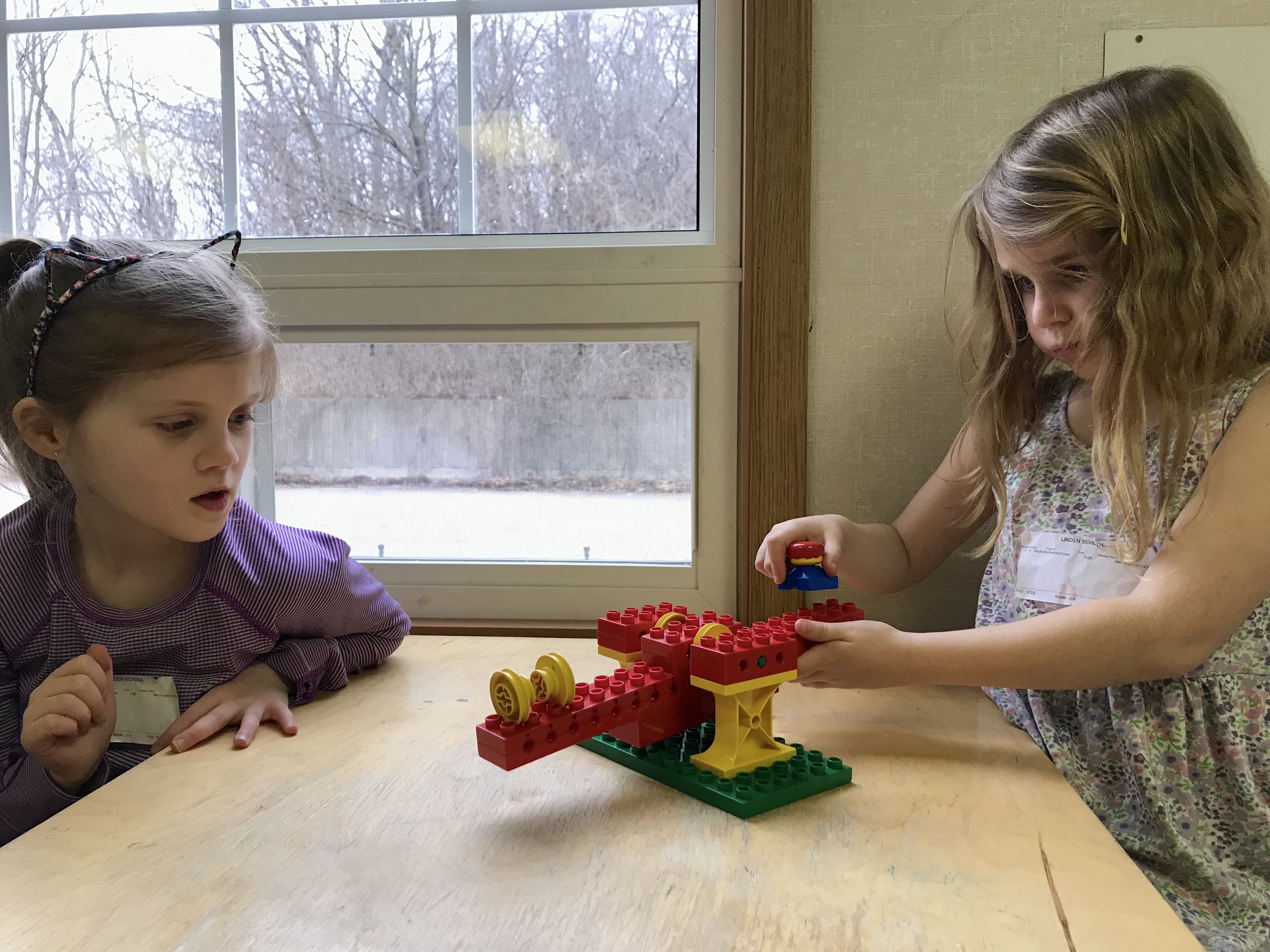 G and M use trial and error to discover that by moving the heavier weight (the person) closer to the fulcrum or by moving the counterweights away from the fulcrum, they can balance the weight. They then apply this learning in a demonstration where G tries to lift her teacher by standing on the other end of a lever. With a little help from her classmates, G moves her teacher very close to the fulcrum to balance the weight differential between them. 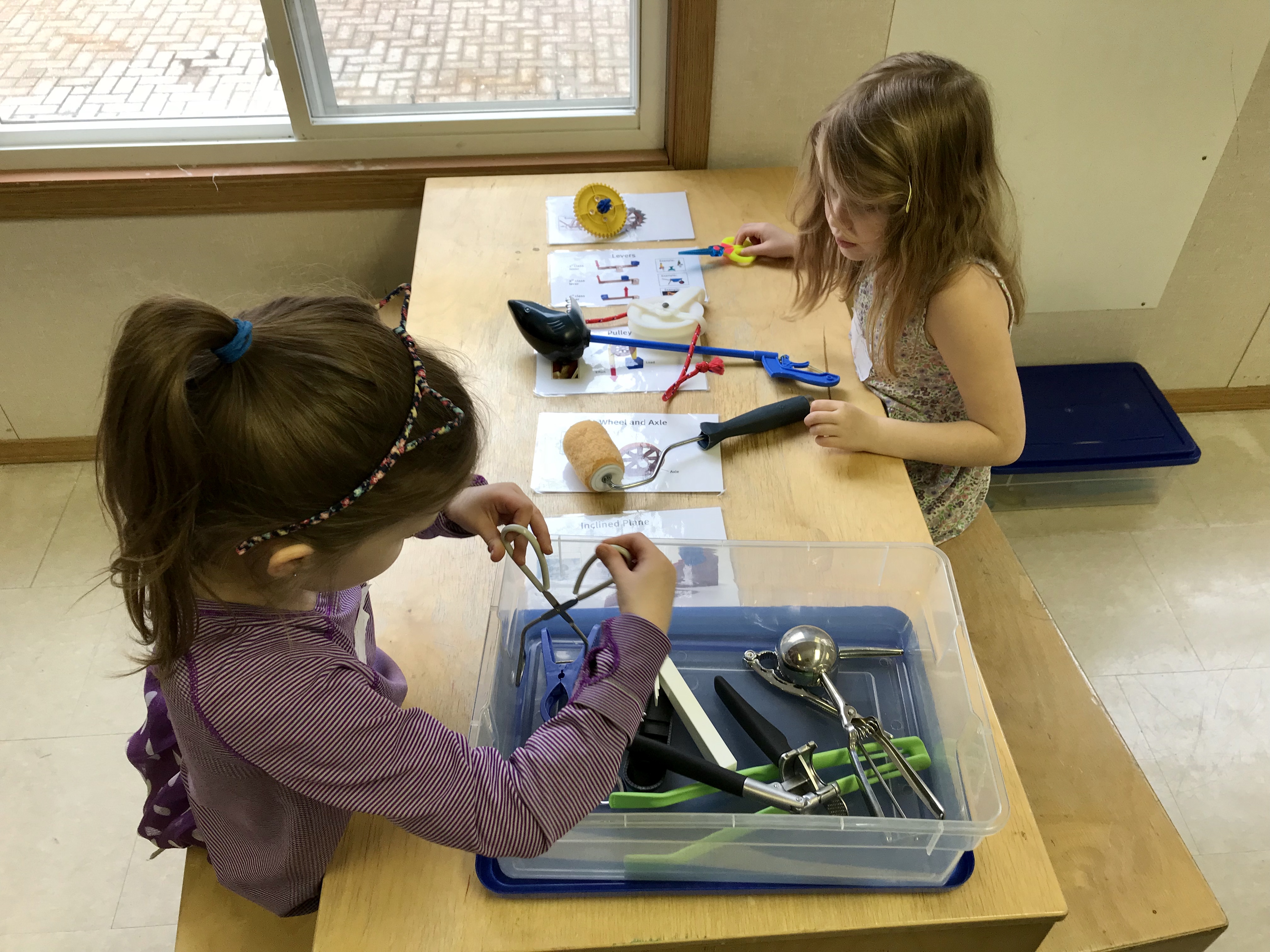 G and M work together to sort these common simple machines into the categories of lever, gear, pulley, wheel & axel, and inclined plane. Some of the tools include more than one simple machine so they are trickier to sort. 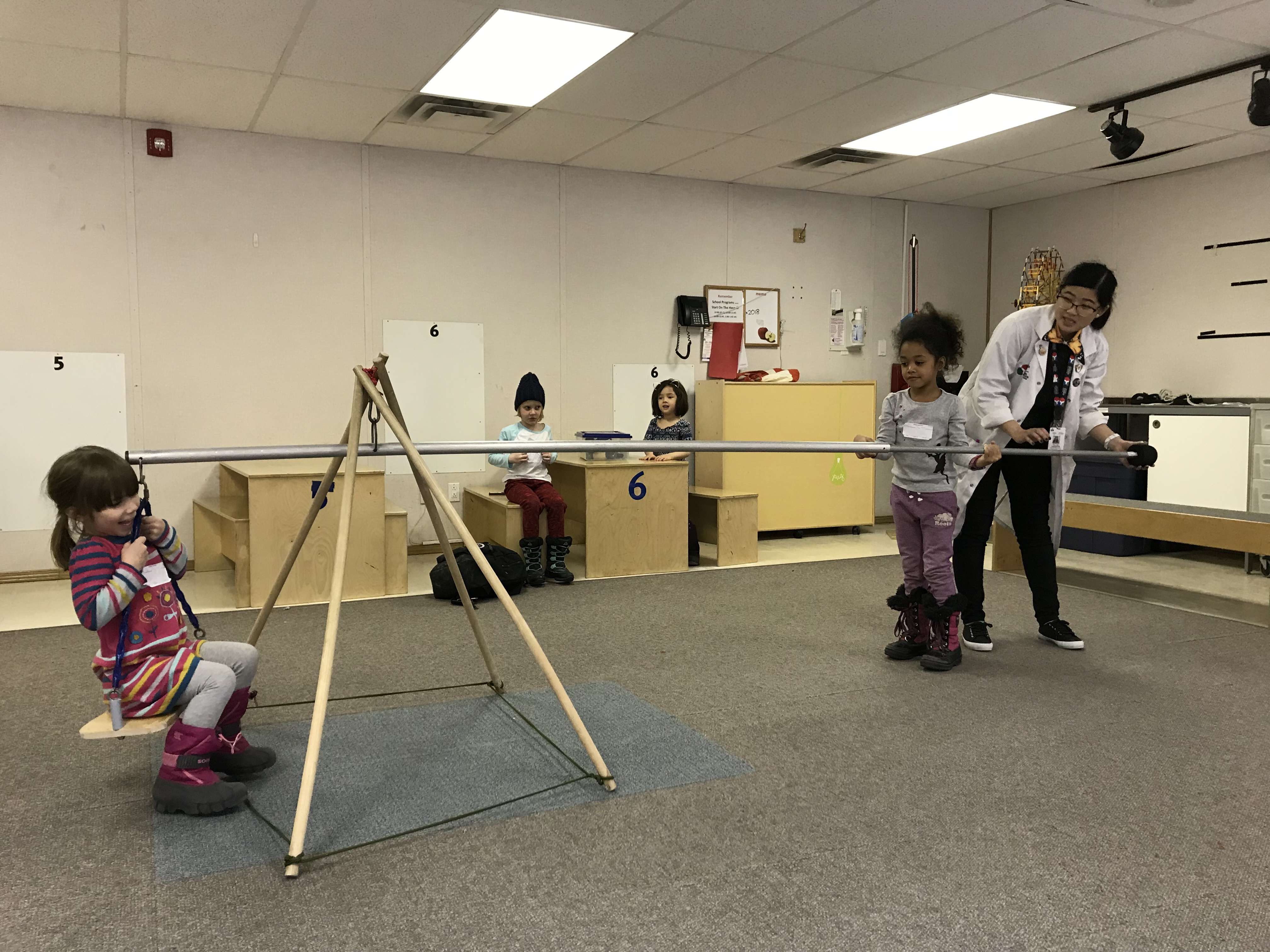 Z discovers that a longer lever allows her to lift A using only one hand! 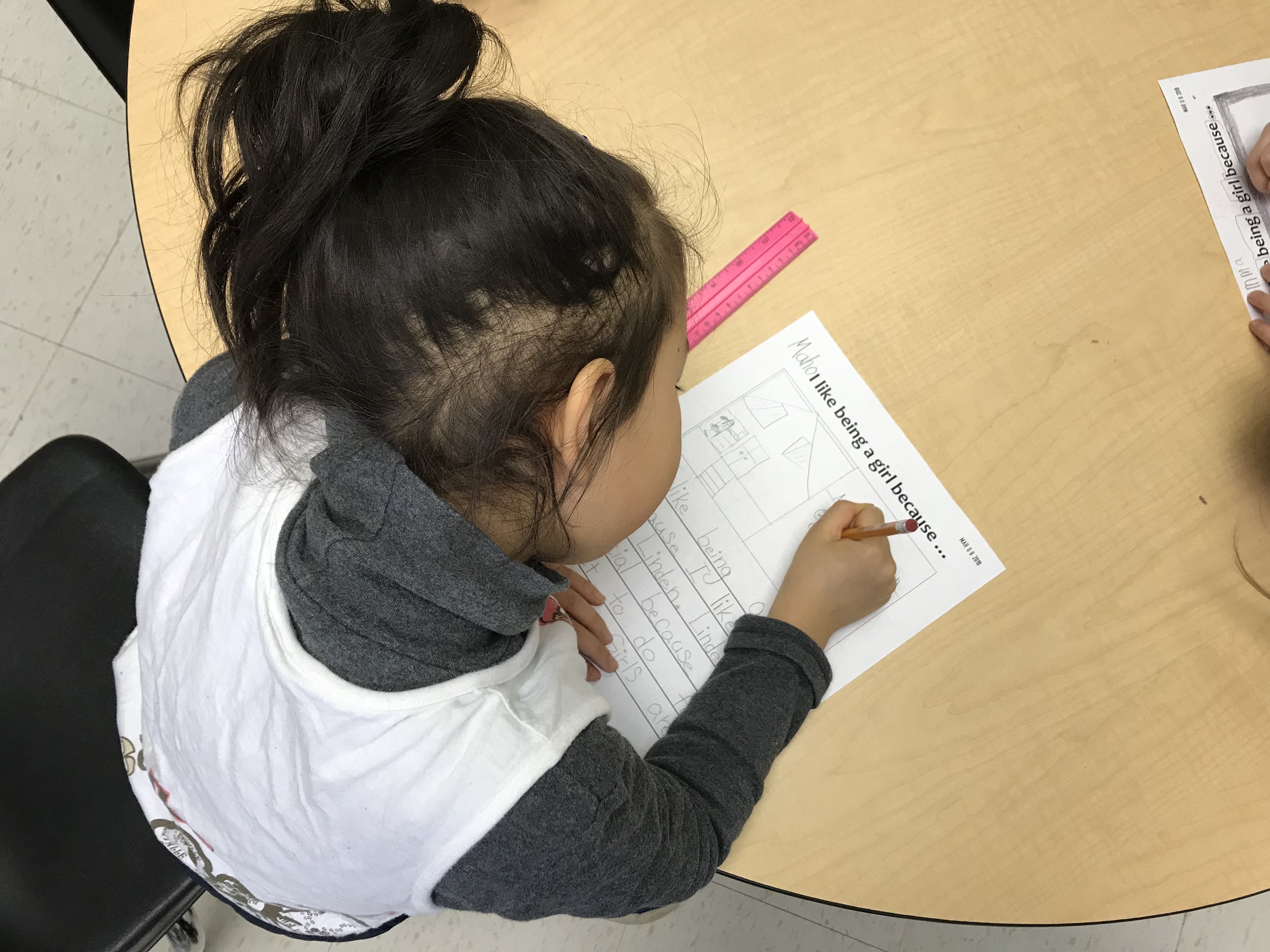 M uses Writer's Workshop to write about why she likes being a girl. Most of her reasons centre around getting the opportunity to go to Linden and the things that make her school special. 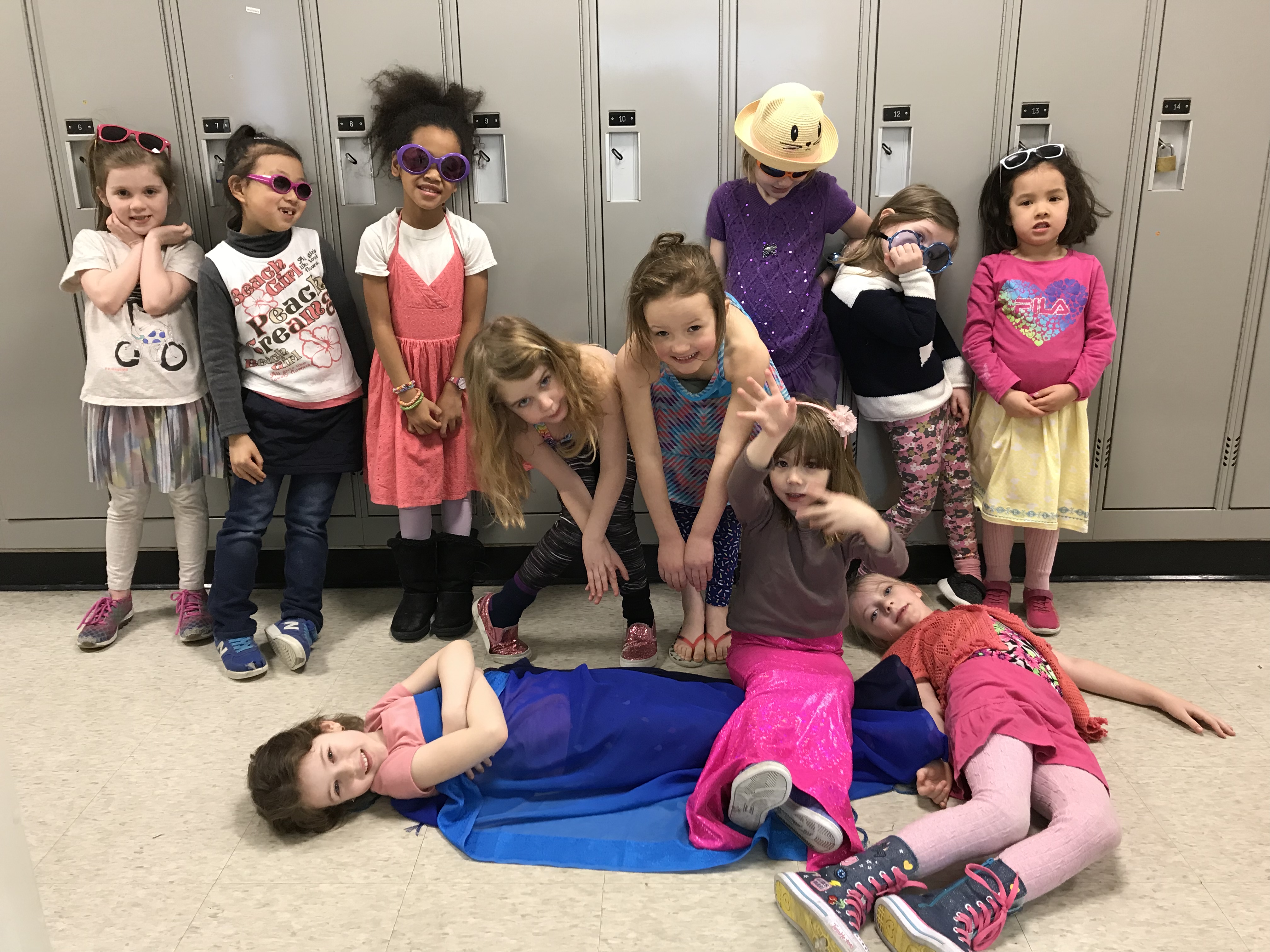 Ever the creative bunch, the Grade 1-2s and Early Learners use all their different beach costumes from Spirit Week to create a beach scene complete with ocean, sand, a mermaid, and a lot of sunglasses. 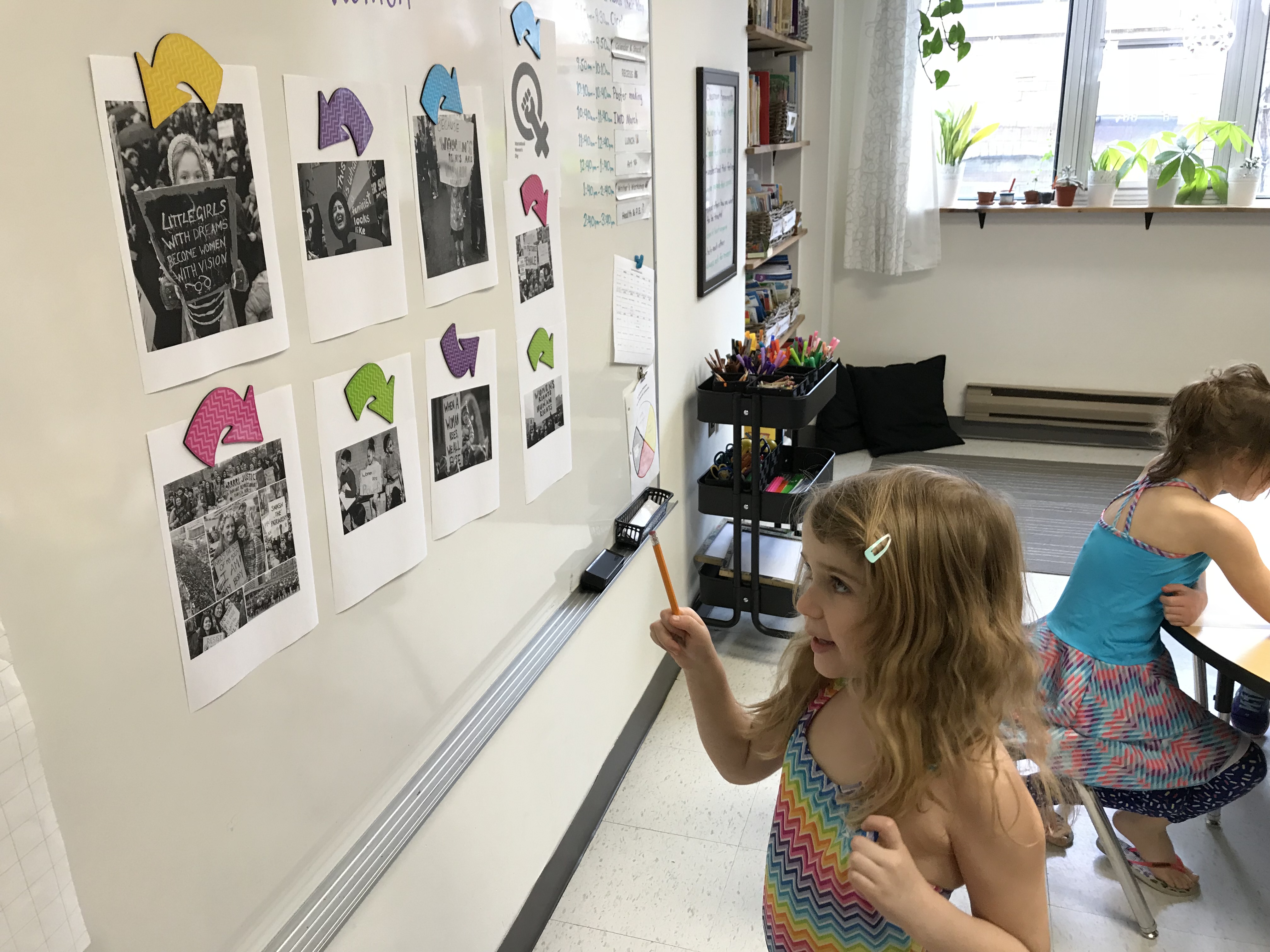 M reads all the different women's march signs displayed on the board before deciding on the message she wants to feature in her own International Women's Day sign. 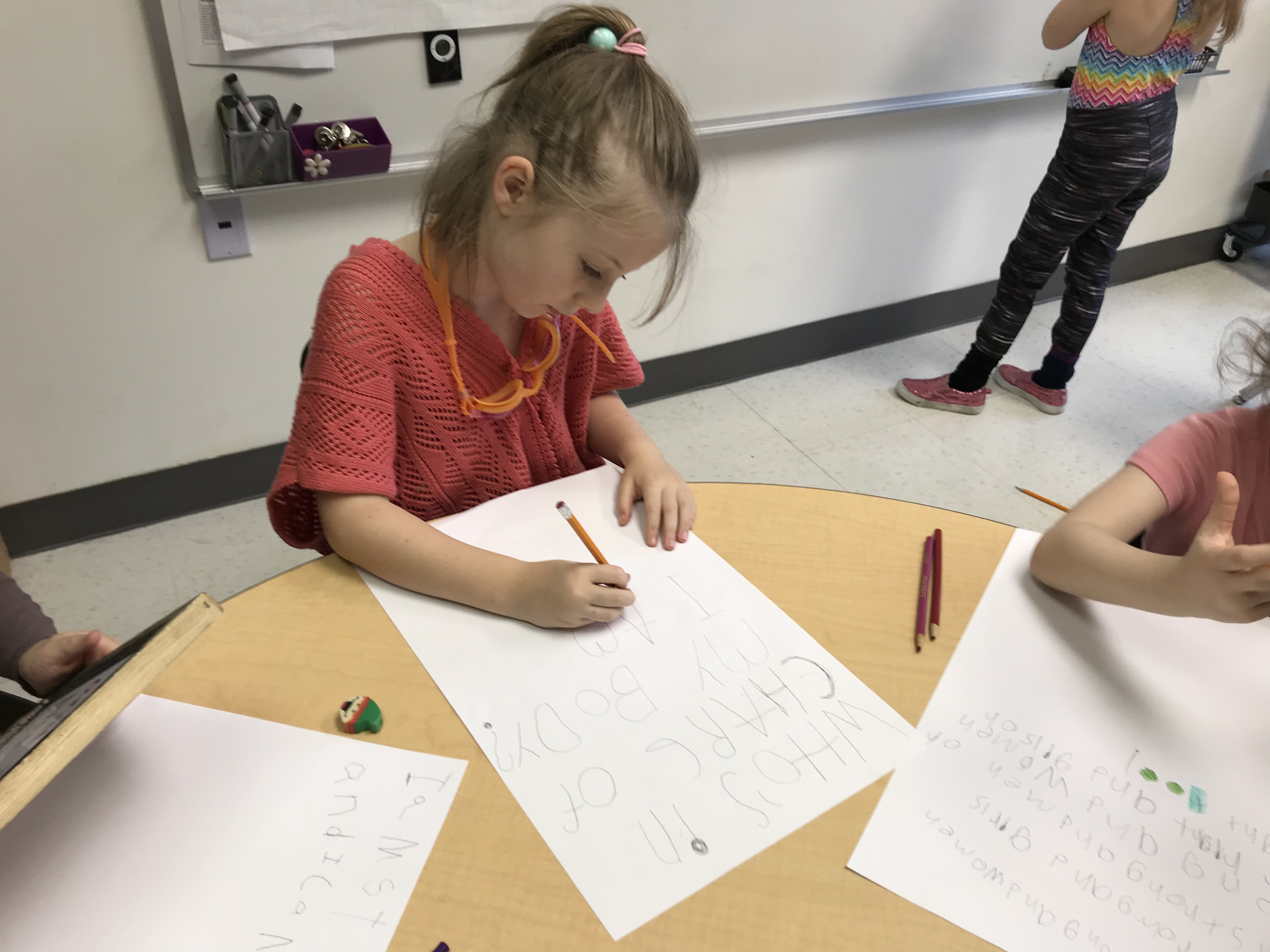 S decides to remind everyone at the march how important consent is. What an important message! 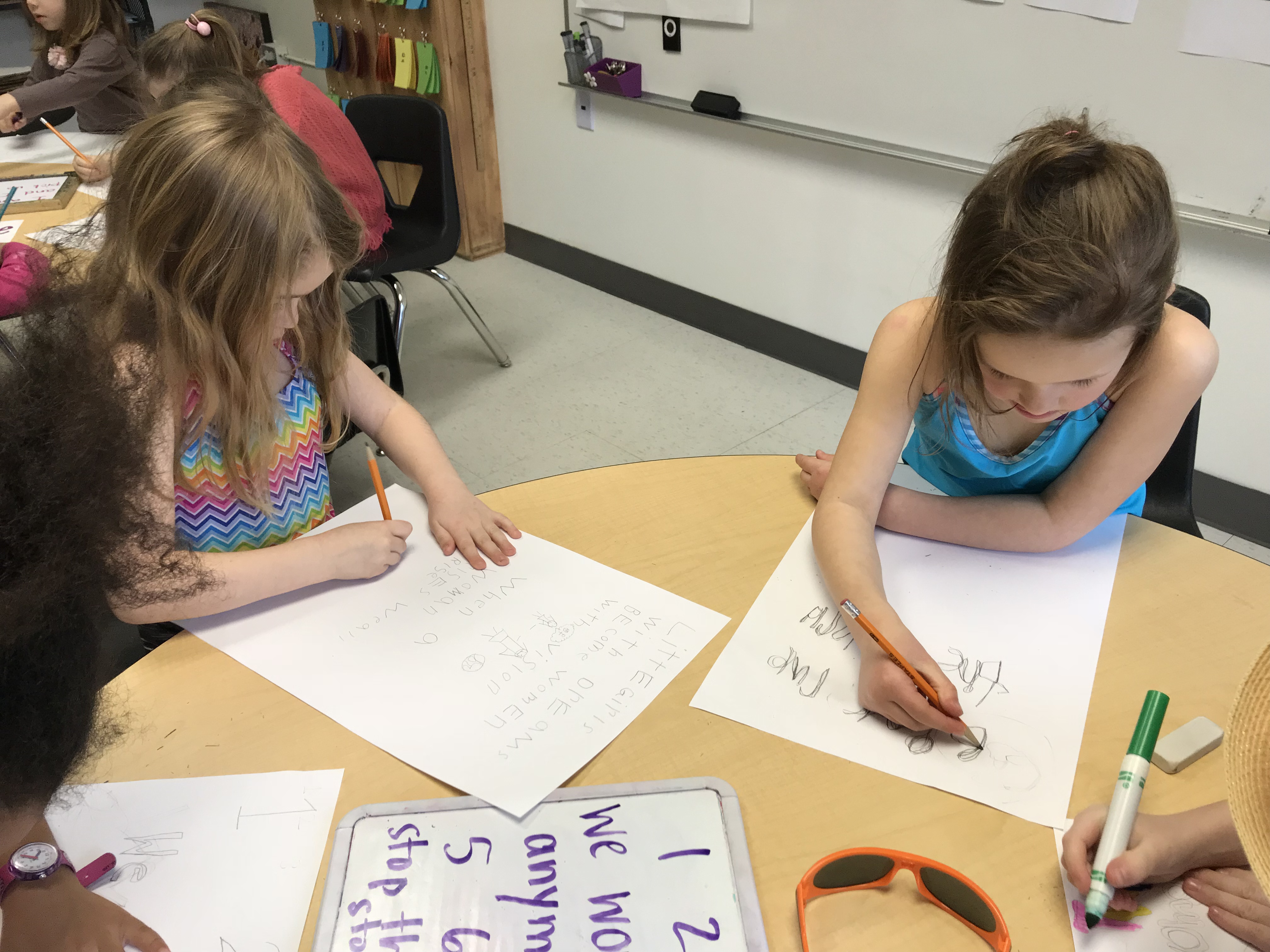 M and K work hard on their signs for the International Women's Day march. 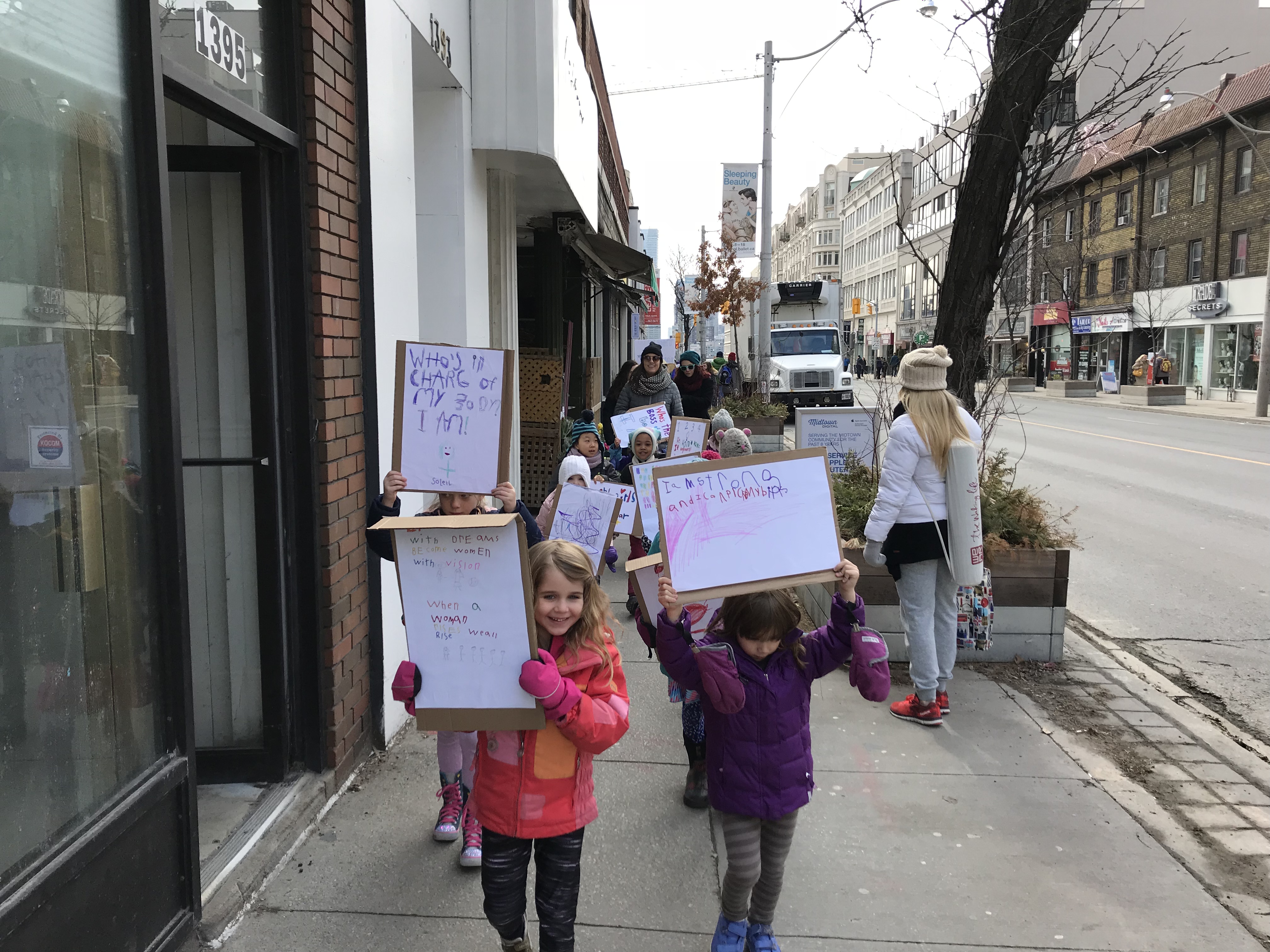 Some of the Grade 1-2s started out a bit quietly on the march but by the end, they were chanting along with the older girls to spread messages like "Who's the boss of my body? I AM!" 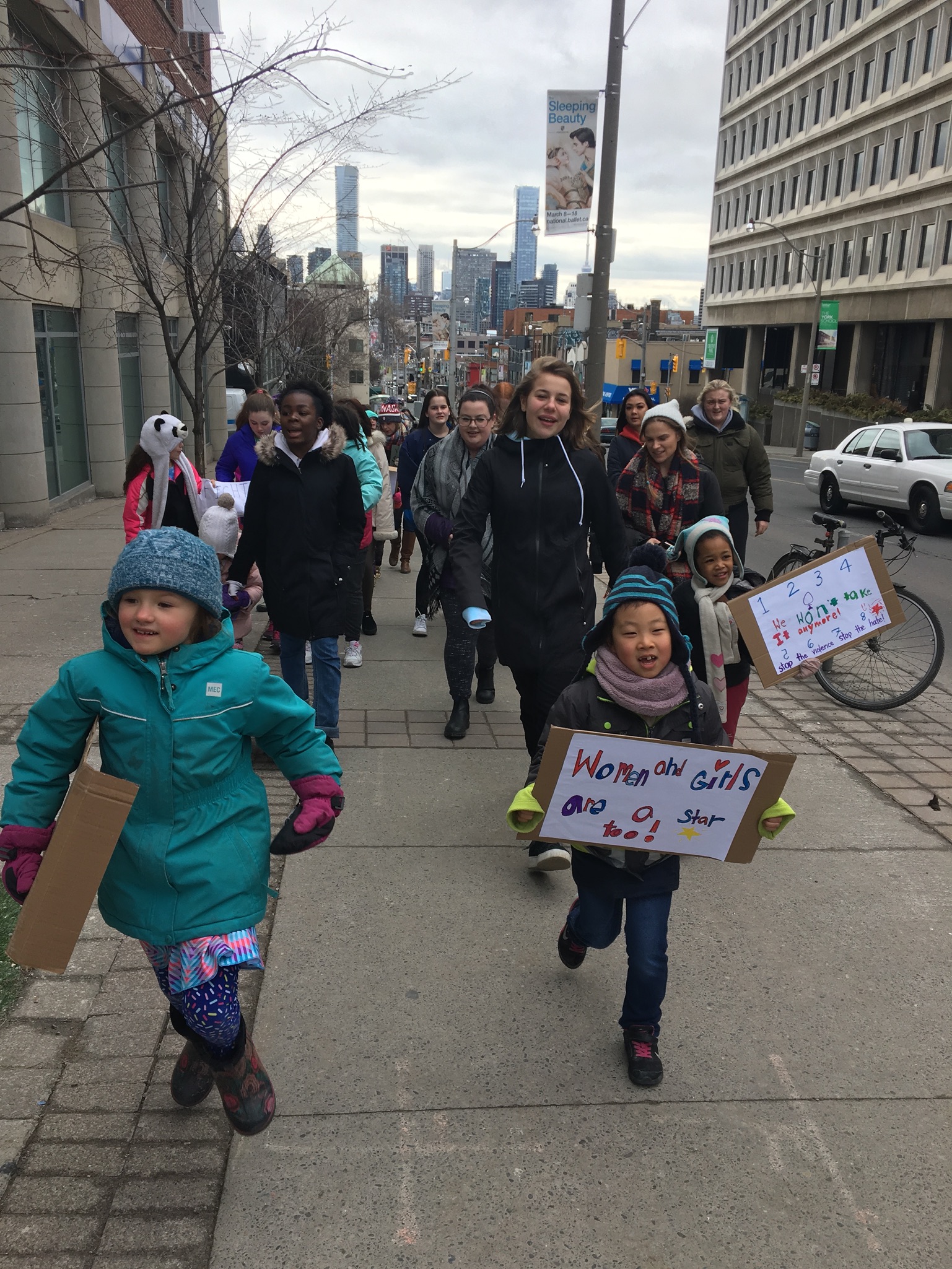 The march turned into a joyful skip for some of the Grade 1-2s. M remarked that people who stopped to wave or honked their horns "must believe in the same messages that we're saying". What a great feeling! 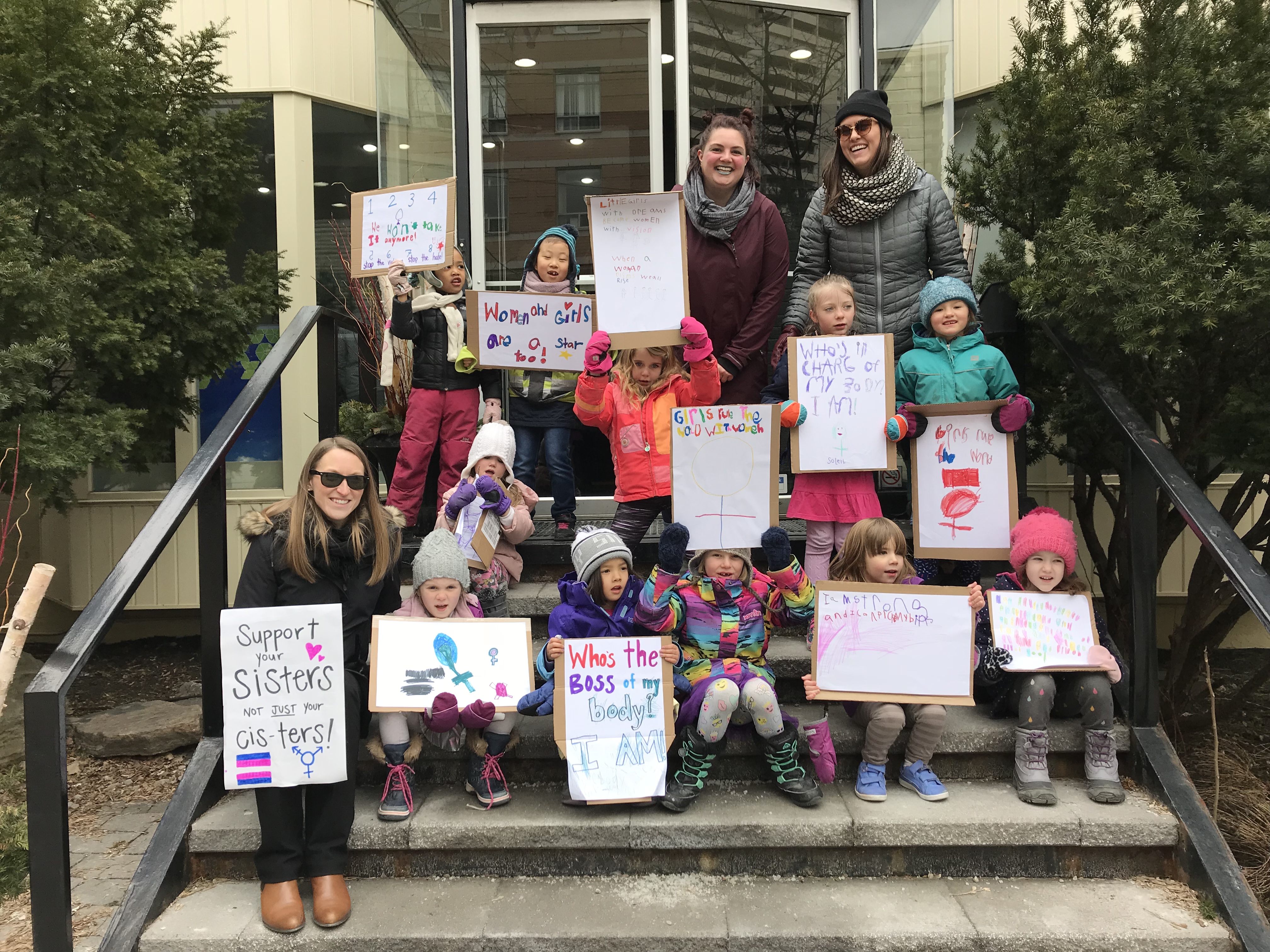 Anyone who says that kids this age are too young to tackle tough issues of justice haven't met a group of students as thoughtful and courageous as this bunch. 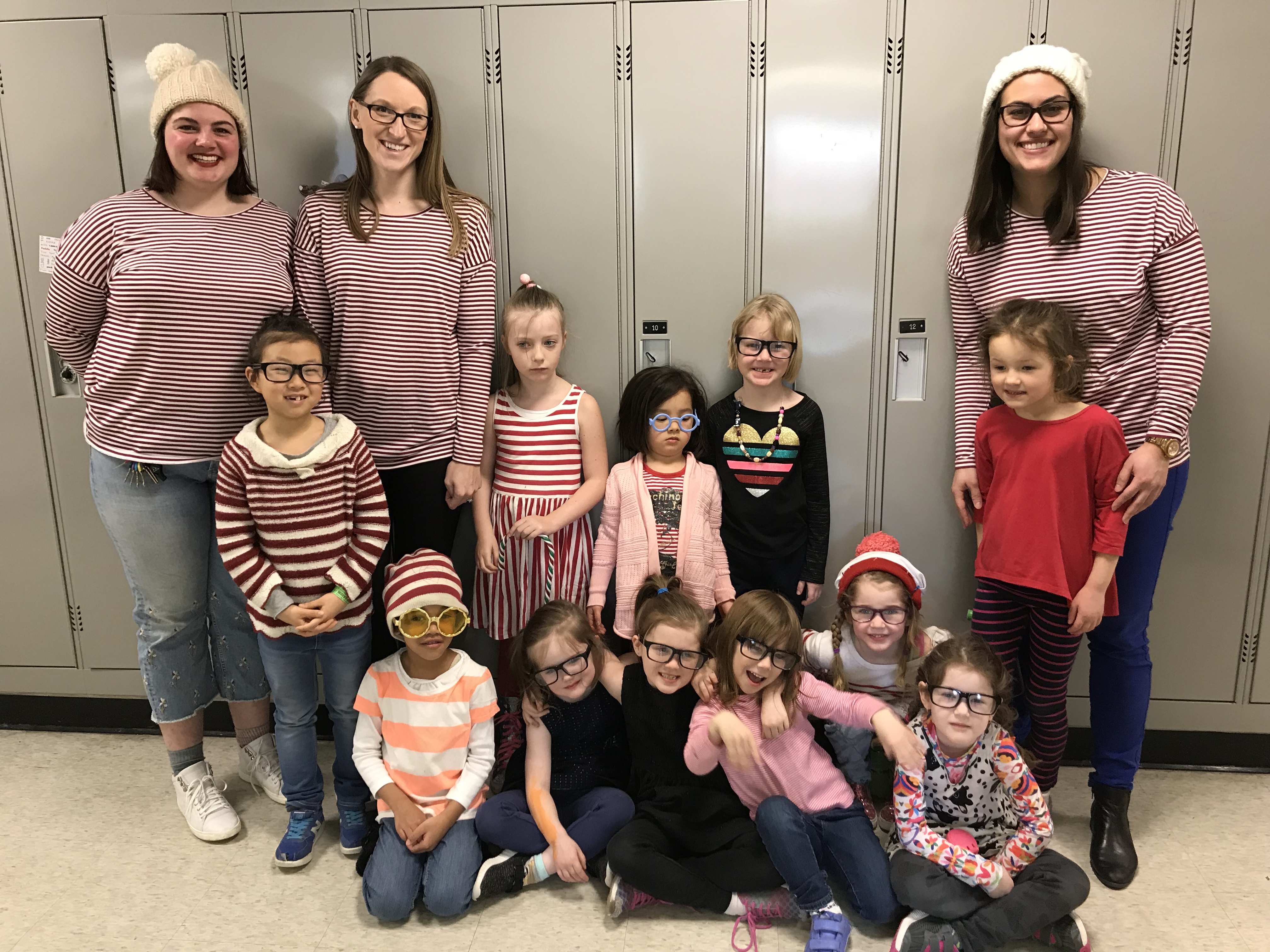 The Grade 1-2s and Early Learners joined together to show off their awesome Where's Waldo costumes for Linden's annual Spirit Week.

The Grade 1-2s and Early Learners worked together throughout the last few weeks to choreograph this routine for the Spirit Week lip sync battle. They learned a lot about building consensus, making decisions together, and supporting each other's ideas, all while doing one of their favourite things: DANCING. 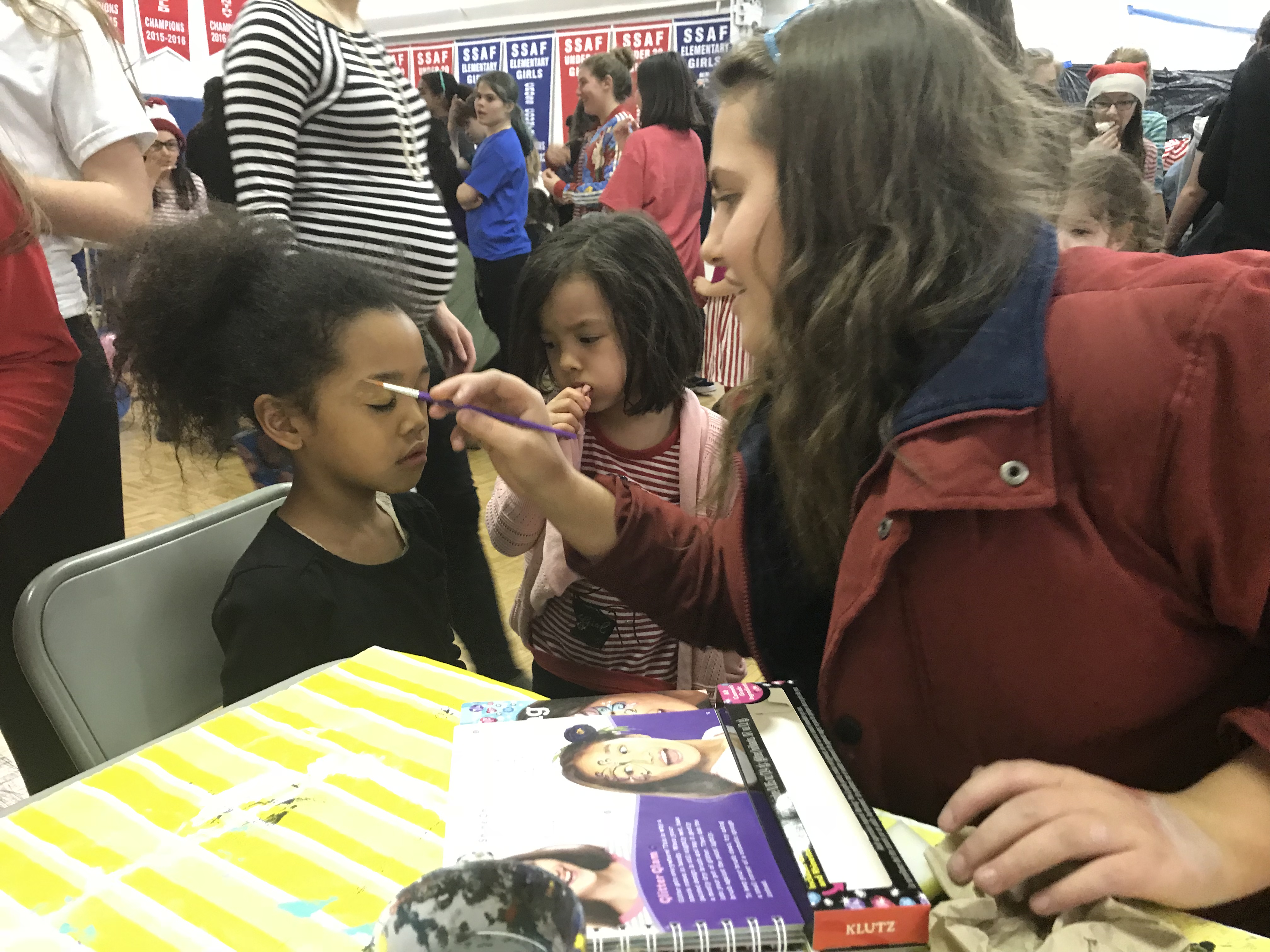 At the end of Spirit Week, Z gets her face painted by a senior student at the carnival. 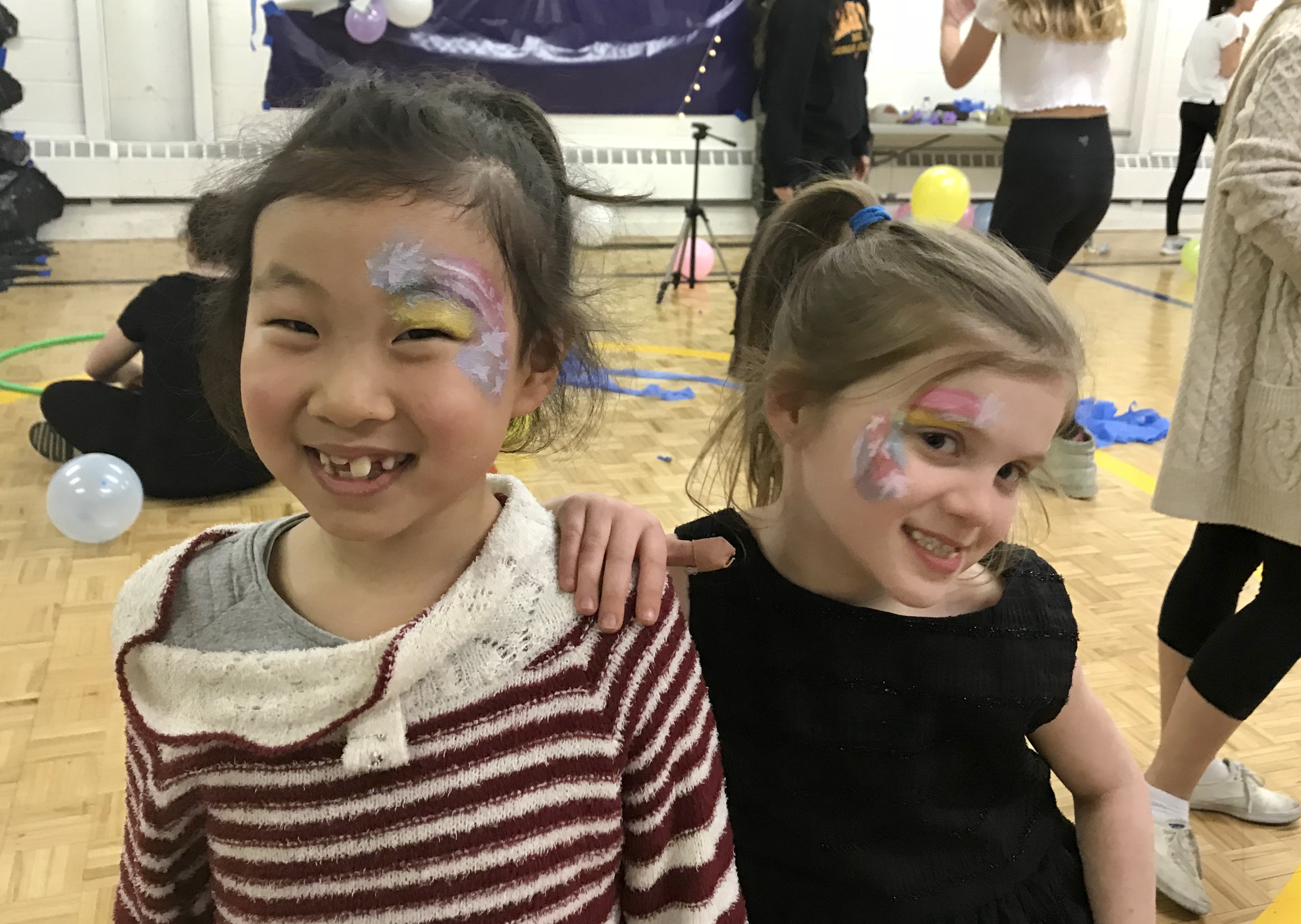 M and G show off their matching face paint designs on Friday. Thank you to the Grade 11s for planning such a fun carnival celebration to end the week!