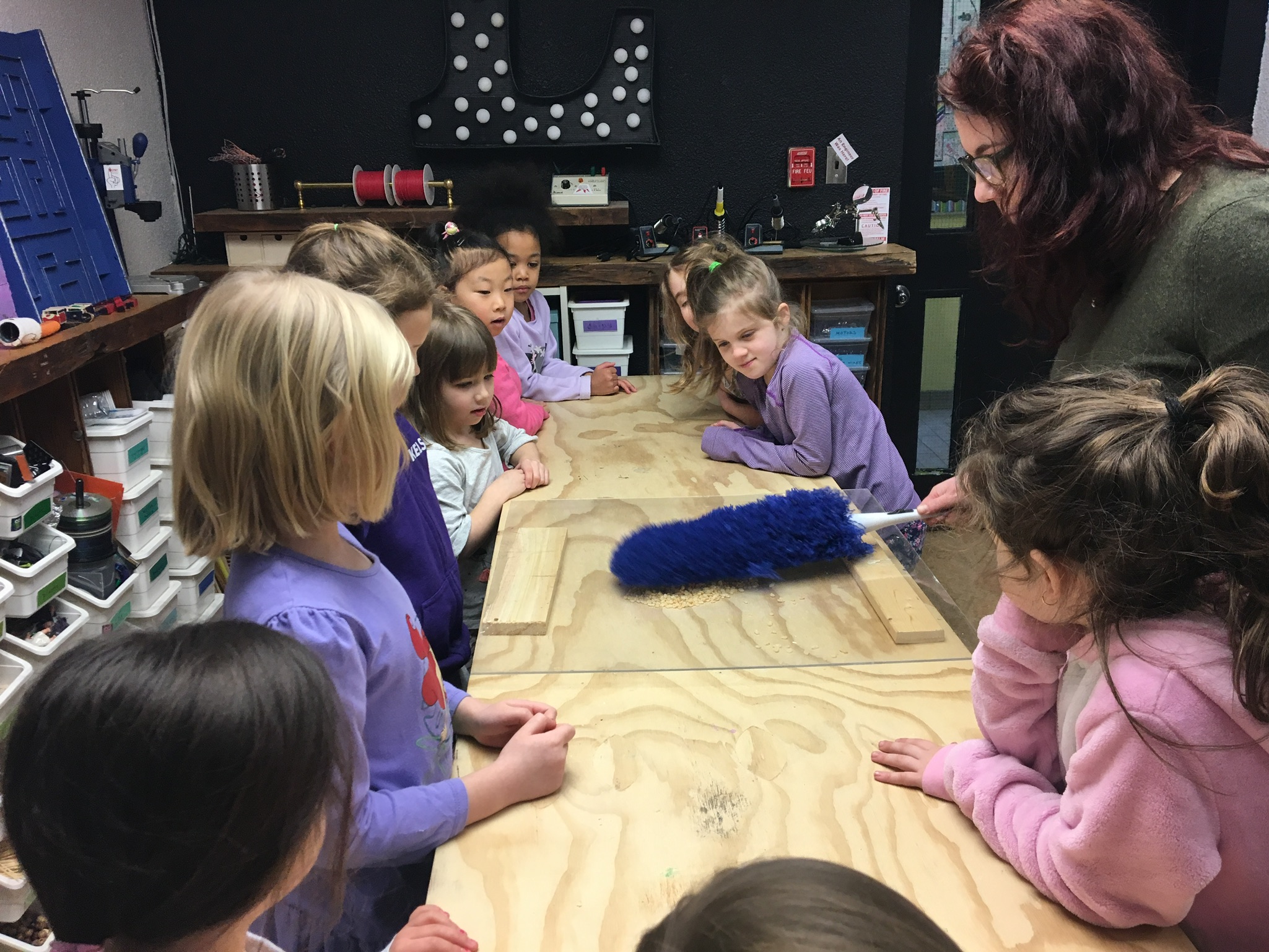 With two weeks to go until the Linden Science & Technology Fair, students were wrapping up the testing phases of their experiments and conducting research to learn from other scientists about their subjects. We also kicked off Black History Month with an exciting All-School where the girls decorated our classroom door to highlight the lives and accomplishments of two notable black women: Jean Augustine and Rosa Parks. We enjoyed working with the Grade 11s on our door design and have been reading about other important black women from the book Little Leaders: Bold Women in Black History. The Grade 1-2s were particularly moved by the story of Alice Ball, an African-American woman who developed a treatment for leprosy and then died very young, only to have her supervisor take credit for her discovery for decades! These young scientists who are in the midst of their own experiments can certainly understand how terrible it would be to have someone take credit for your important work. Friday was a blisteringly cold day and we fearlessly braved the elements for our annual Make & Skate Day. We spent the morning creating clay beasts at Harbourfront Centre with a terrific instructor named Alexandra and then we hit the rink for the afternoon. With many novice skaters in our class, we thought the cold might take its toll on the students but spirits were high and determination was plentiful. We had a terrific day and everyone was staying upright by the end! 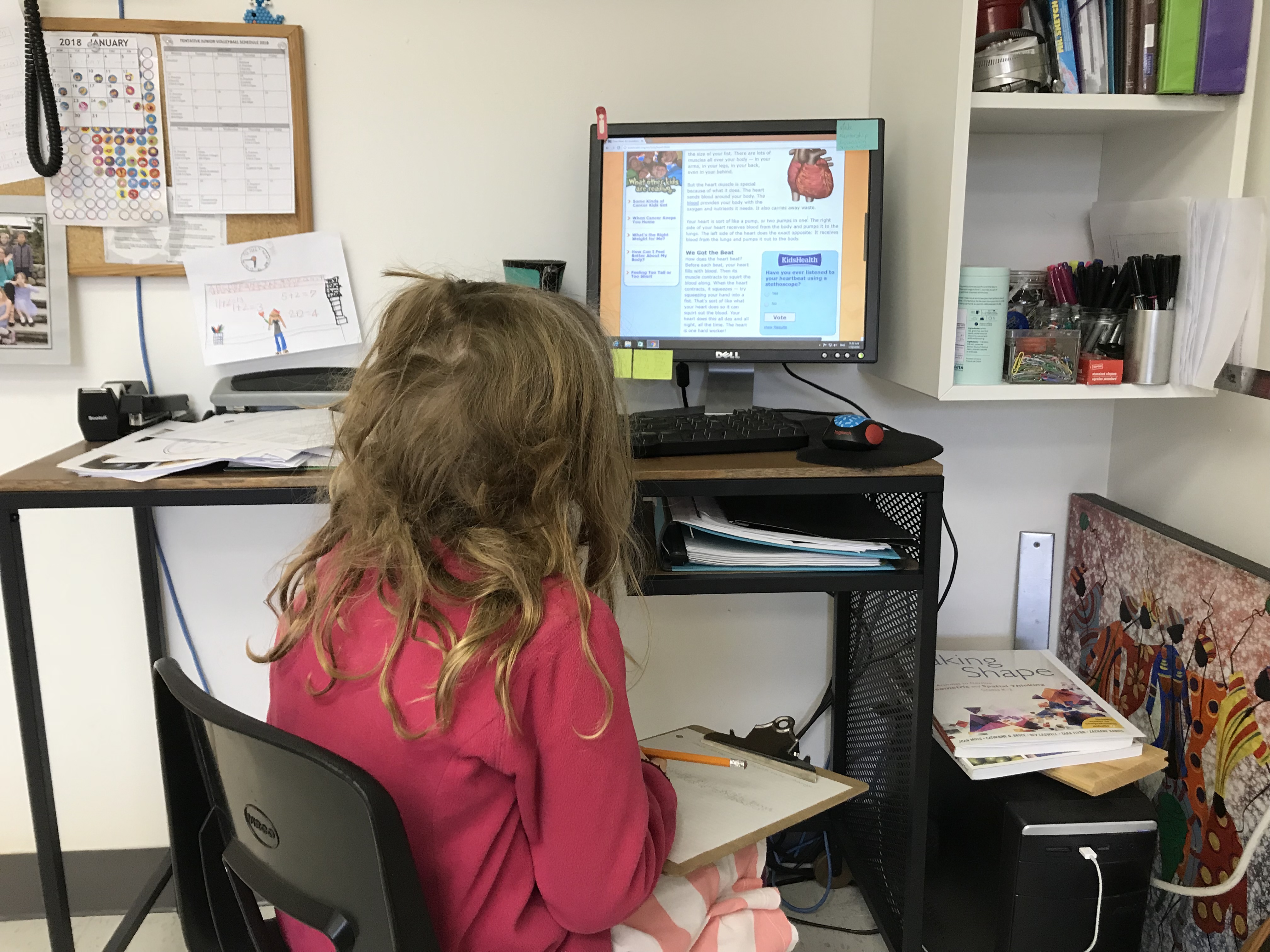 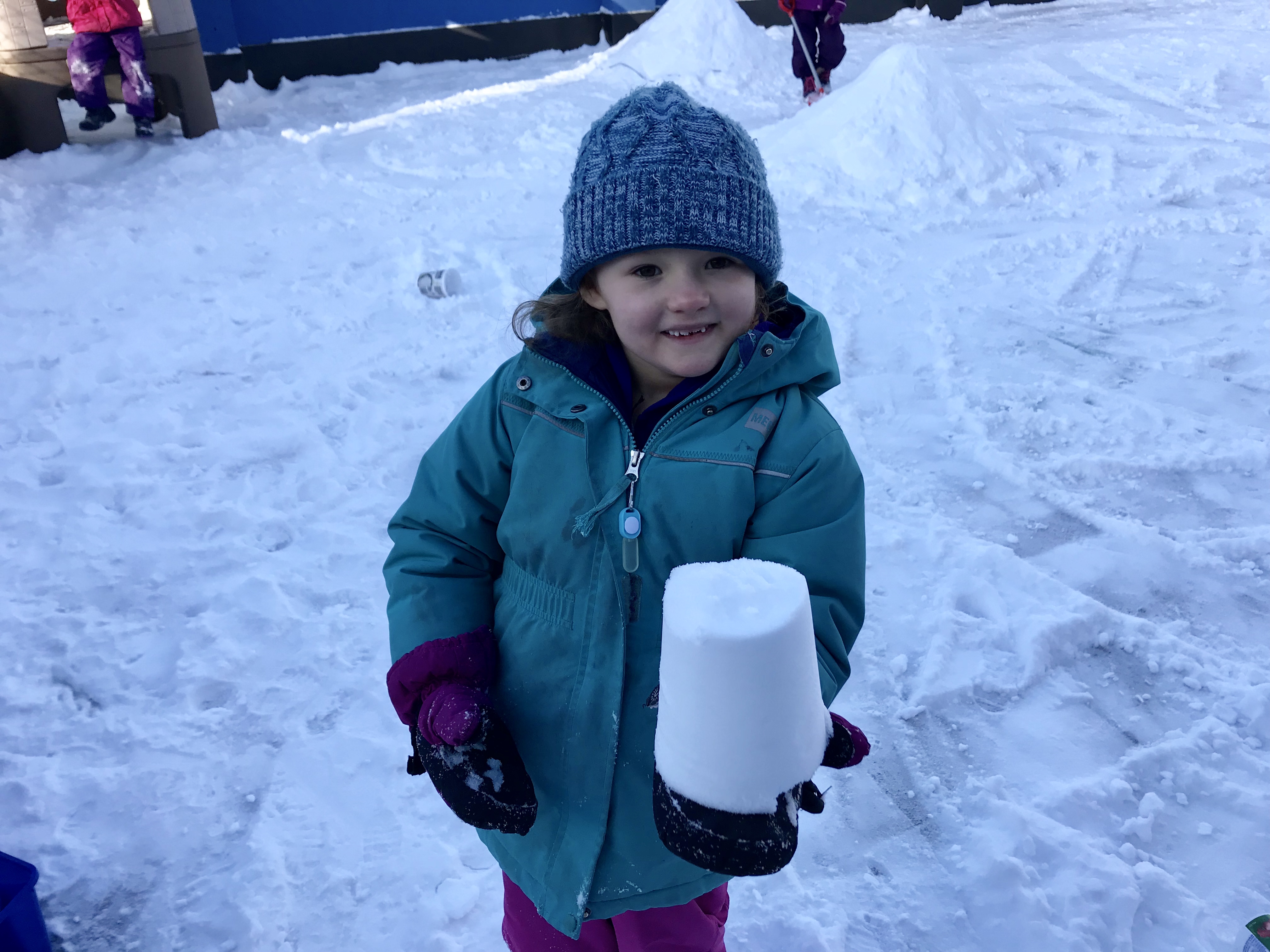 K: “I built a castle on top of my hand with a container and I put snow in the container. I made it so strong by putting big chunks of snow and packing it down. It made a snow castle that I balanced on my hand. I felt happy.” 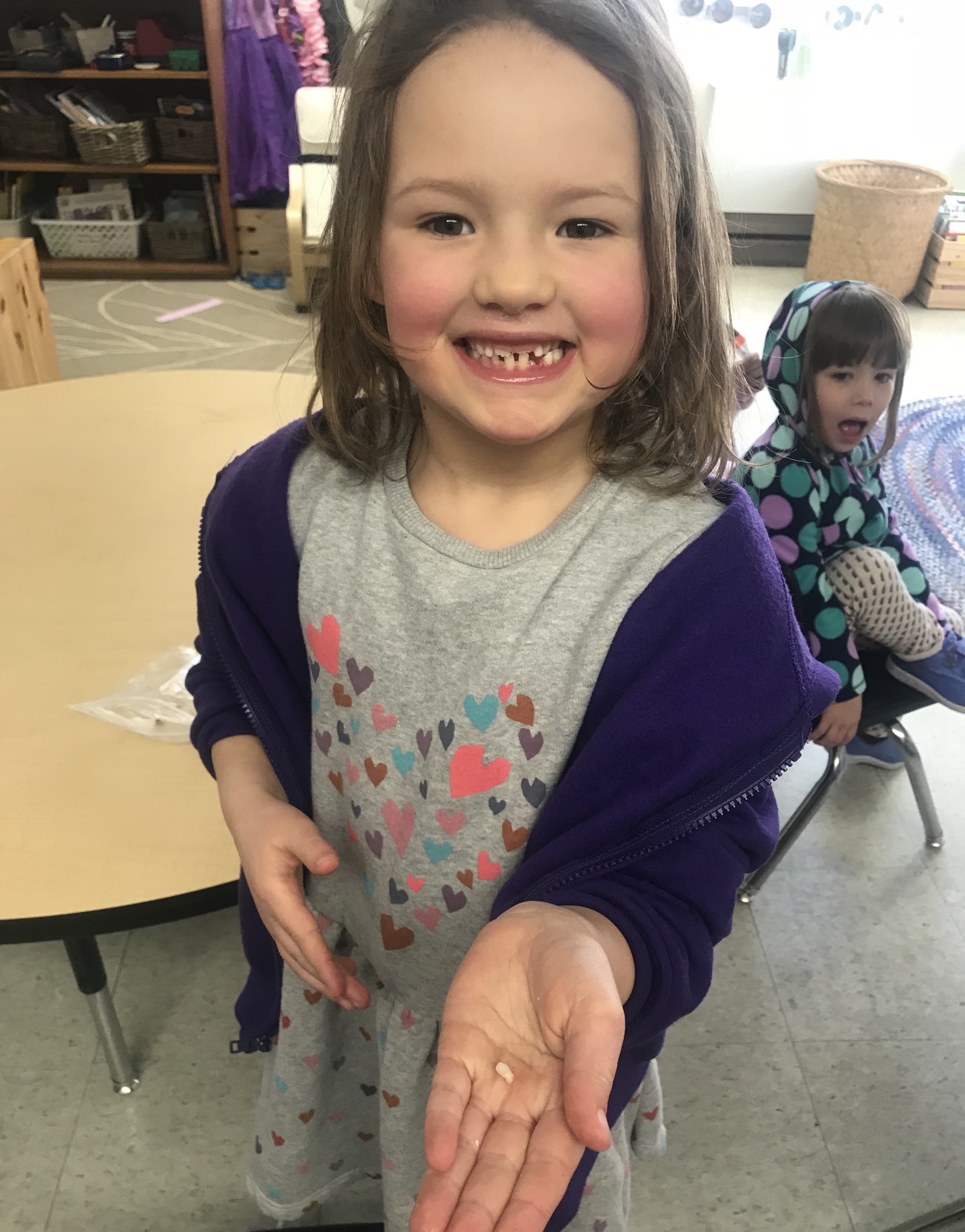 K: “During snack time, I was eating a pear and my tooth popped out right out of my mouth. I have lost five teeth this year. I showed Ellen my tooth and we put it in a bag to take home.” 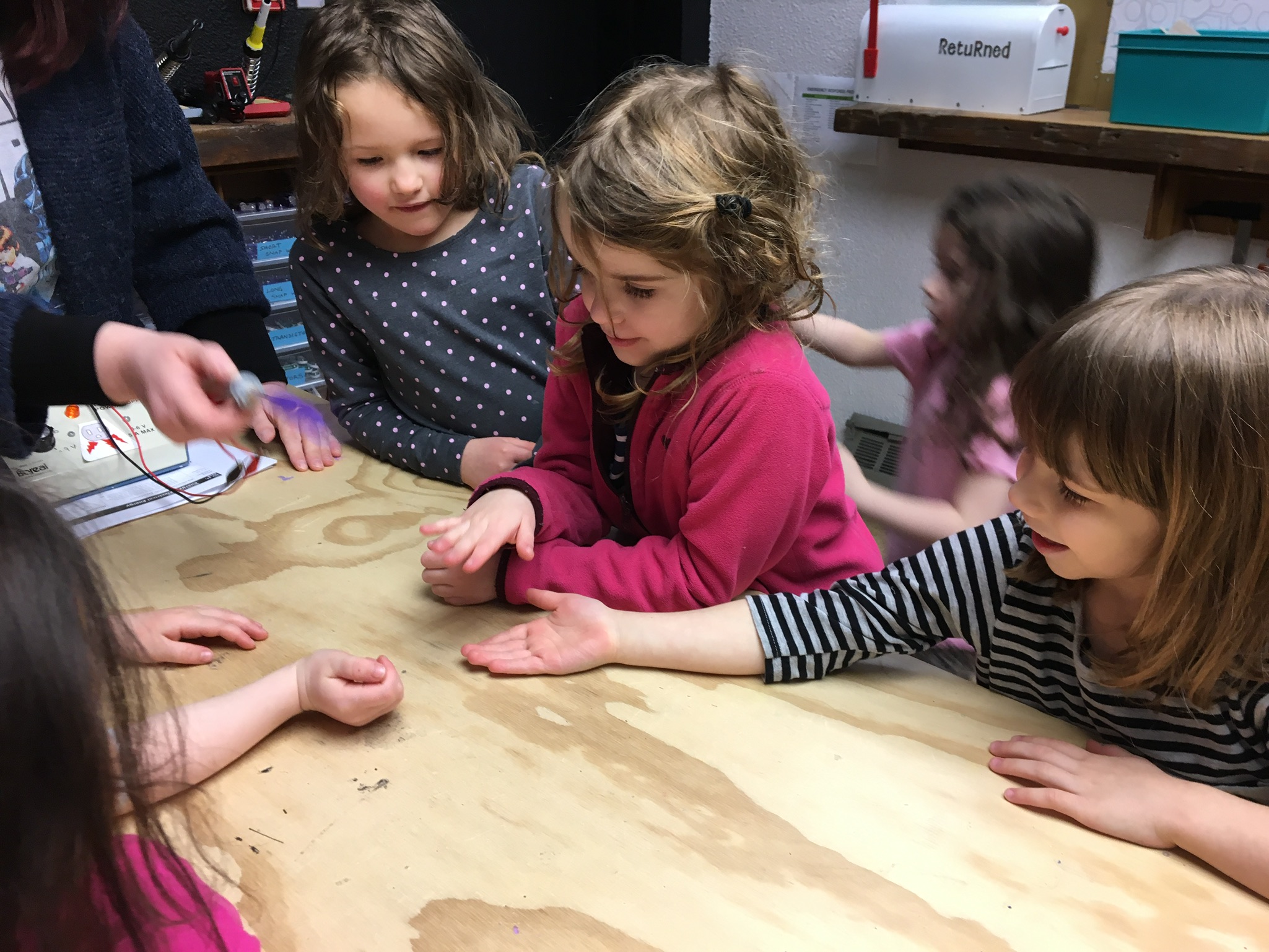 M: “At CERES, we were doing electrical work with motors. Beth made a feather tickle on our hands by attaching it to a motor which made it spin. I was learning that electricity can do lots of amazing things.” 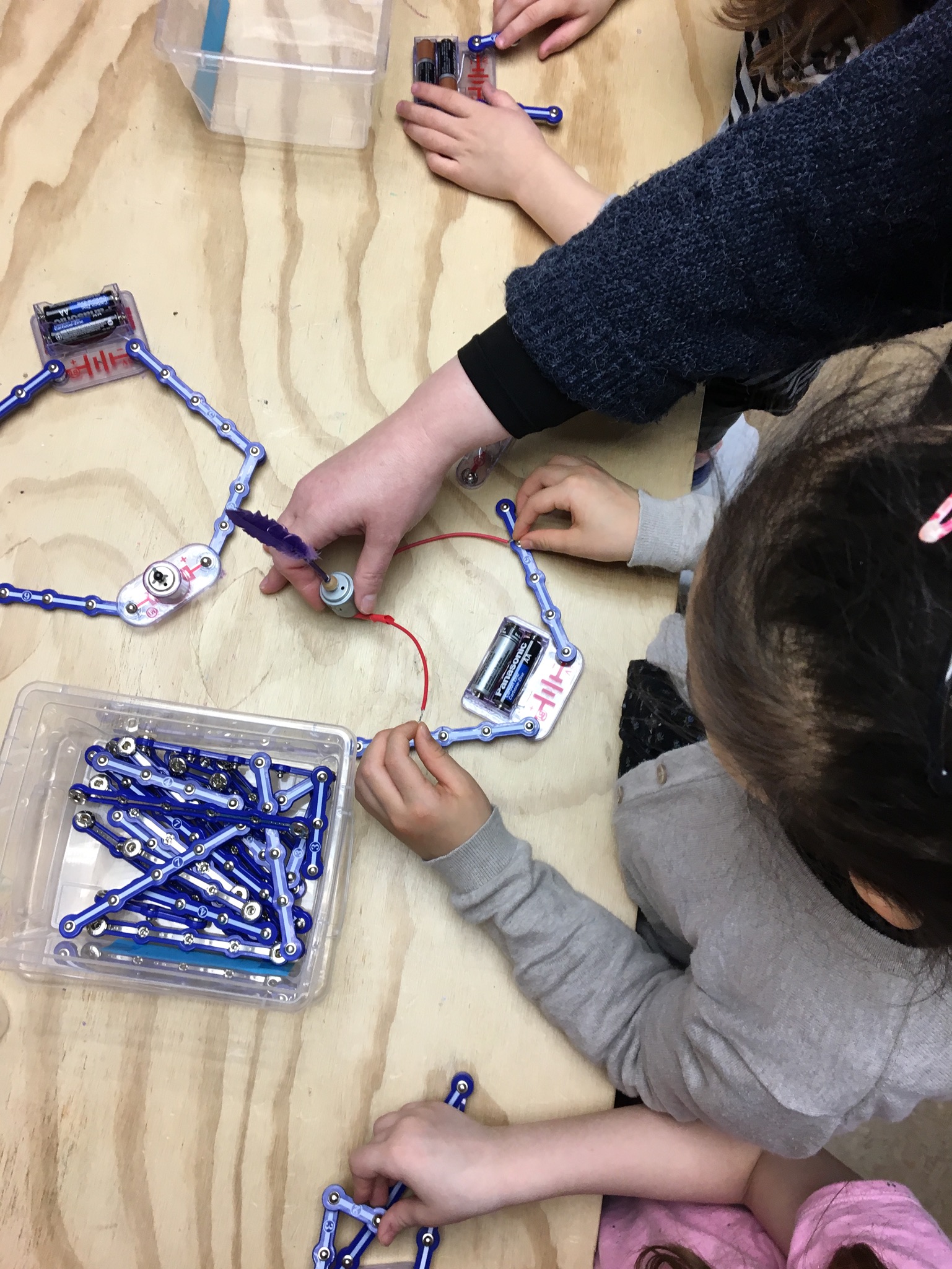 M: “In CERES class, we made SNAP circuits and I wanted something that would spin but there were not any of those so Beth let me use the feather. I held the end of it and I put it on the circuit and then it spun and made a little wind. It made my hair fly because of the wind and then I touched it. It felt really funny.” 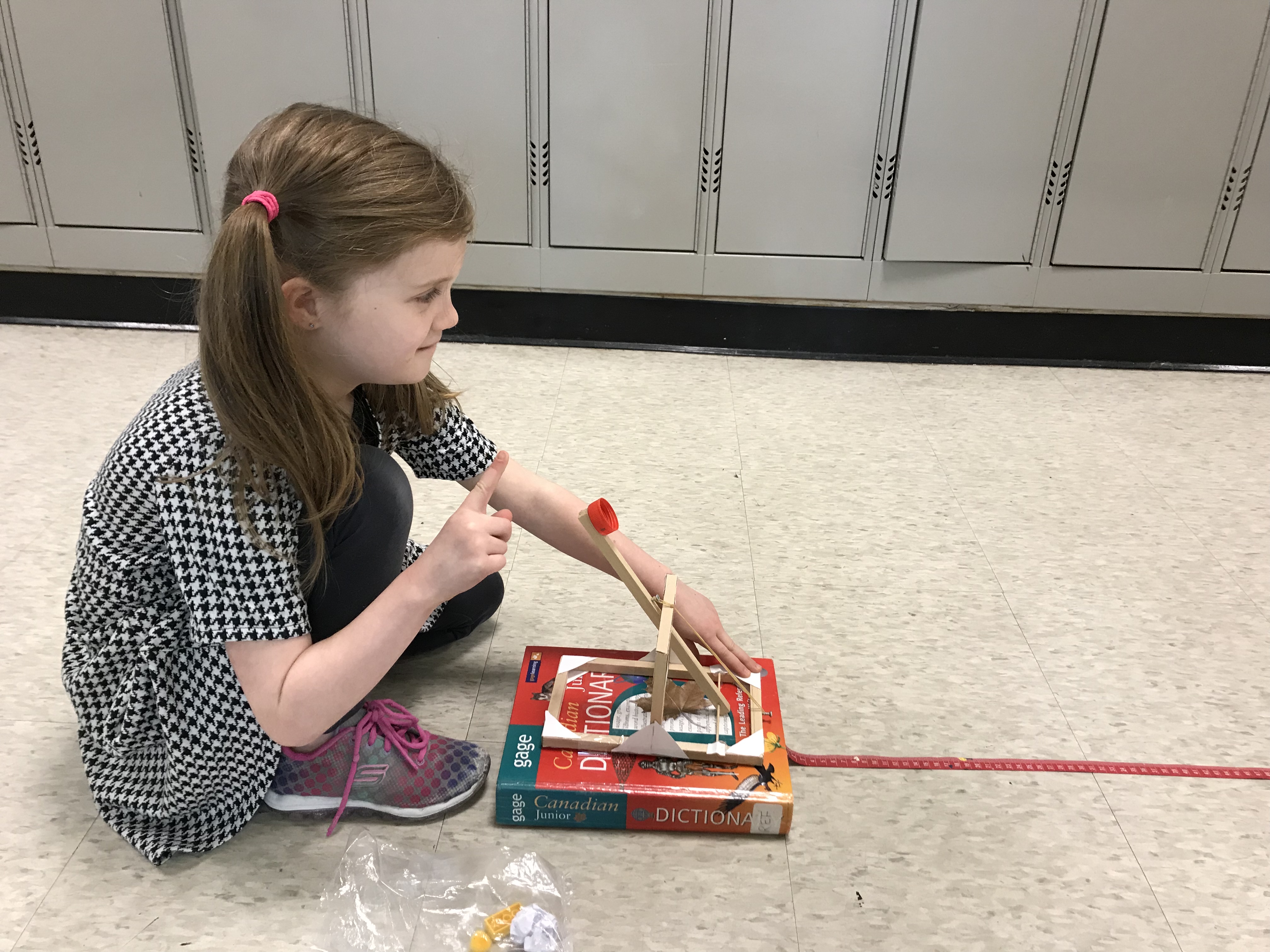 G: “I was doing my experiment for science fair. I counted 1 … 2 … 3 and then I launched things with my catapult. I held the side and I pulled the launcher and then put the thing in. I launched it and then I measured how far the stuff went if it was heavier or lighter.” 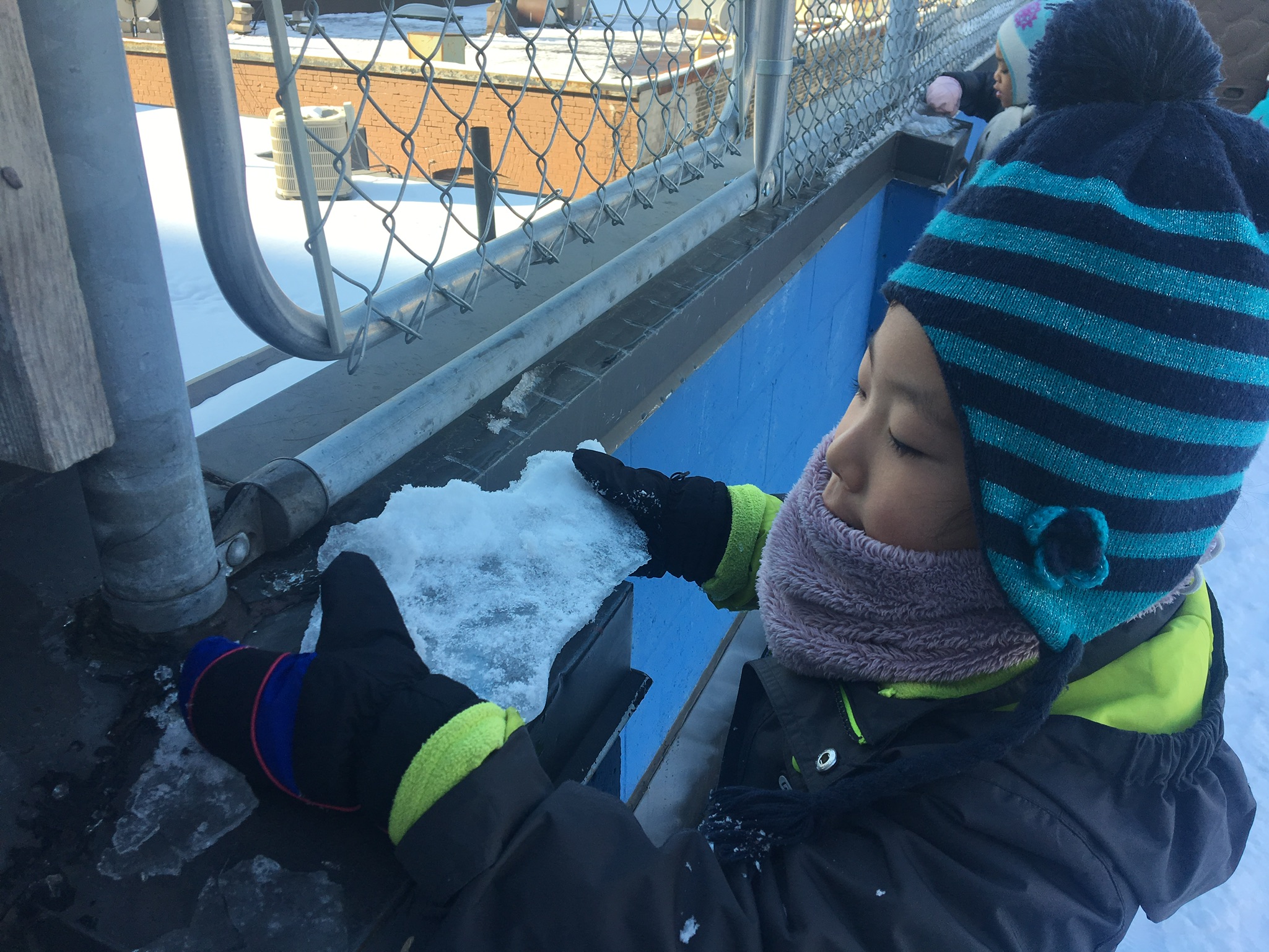 M: “On the roof, I found something that was ice covered with snow. It was really special because I got the whole ice piece on the ledge without breaking it. Then I dropped it and it broke but mostly into big pieces. I hid the big pieces for later but when I went back, they had frozen onto the snow. I was very very very surprised!” 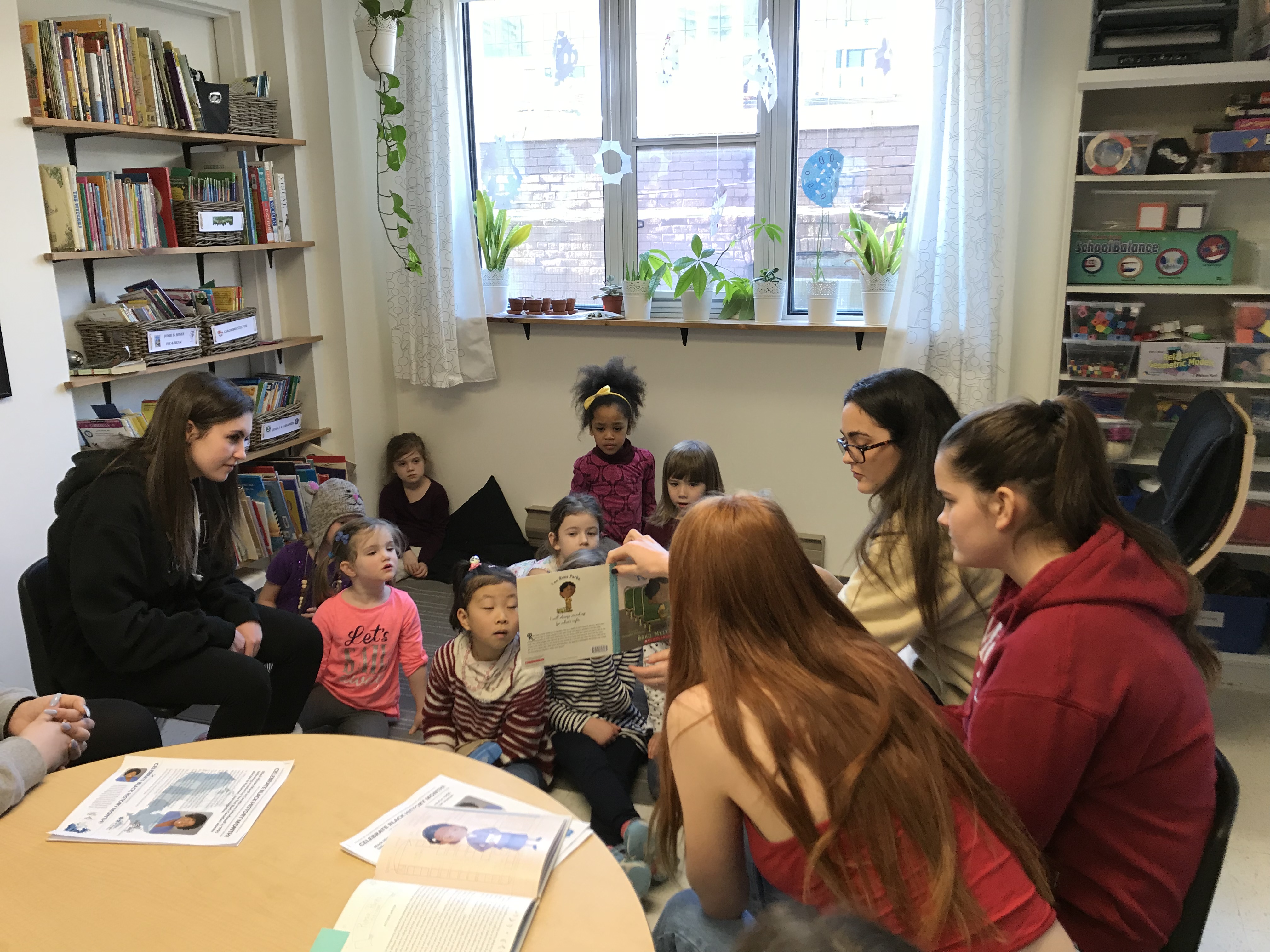 Z: “On the All-School for Black History Month, we were learning about Rosa Parks and Jean Augustine. They were black and they were important. Rosa Parks was somebody who was saying to be fair and to stop segregation, which meant that the black people and the white people had to be separated. In the bus, black people had to sit at the back and only white people could sit at the front. Jean Augustine made the government make Black History Month in February so all around Canada everyone can celebrate it and learn.” 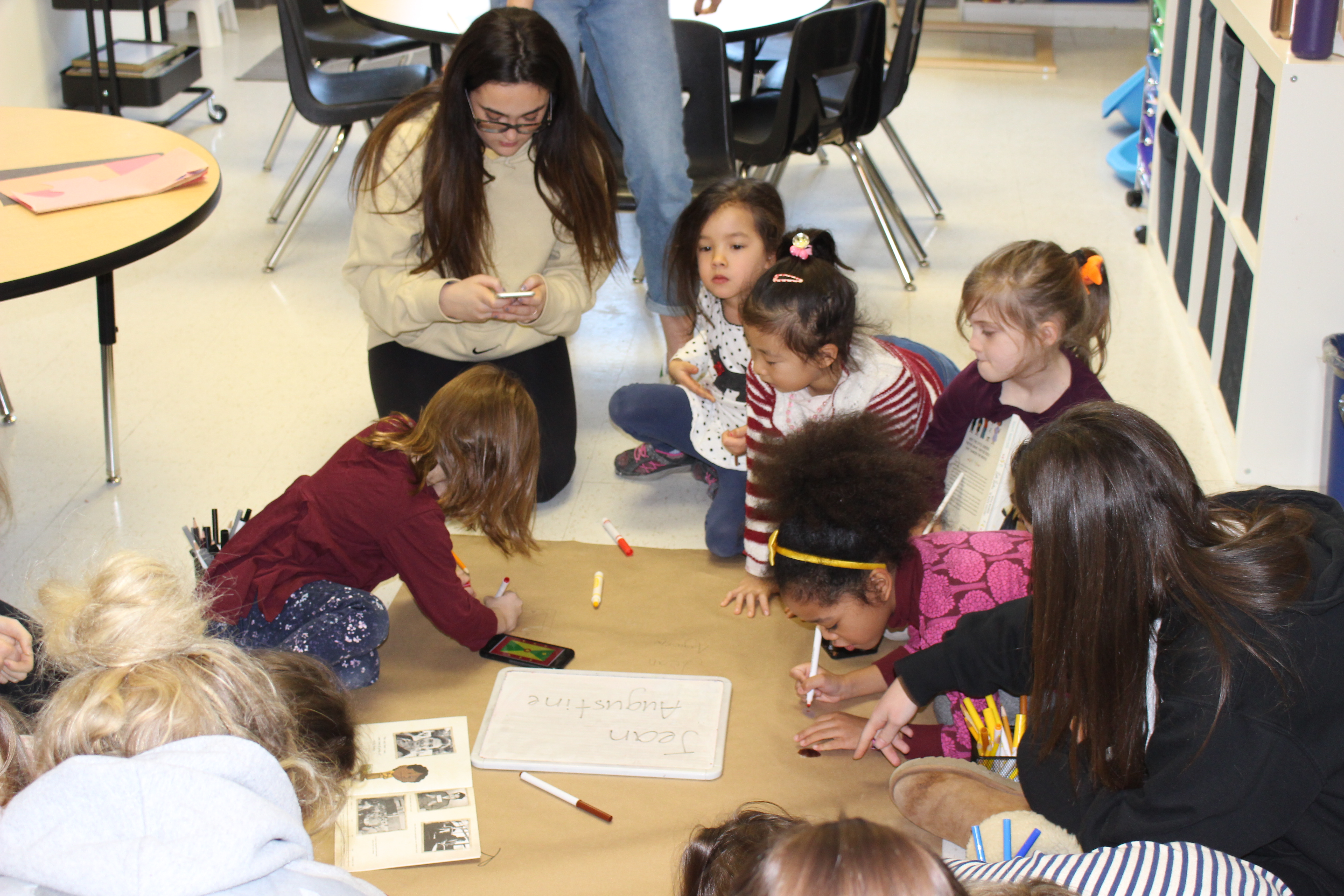 M: “In the All-School, we learned about Jean Augustine and Rosa Parks with the Grade 11s. We drew a picture of the groups that we were in which were the two important black women we were learning about. We wrote their names and important things about them. For example, people drew a bus for Rosa Parks because her problems were with the buses. We are going to put it on our door when we are finished. The older girls helped us make it neat so I loved it.” 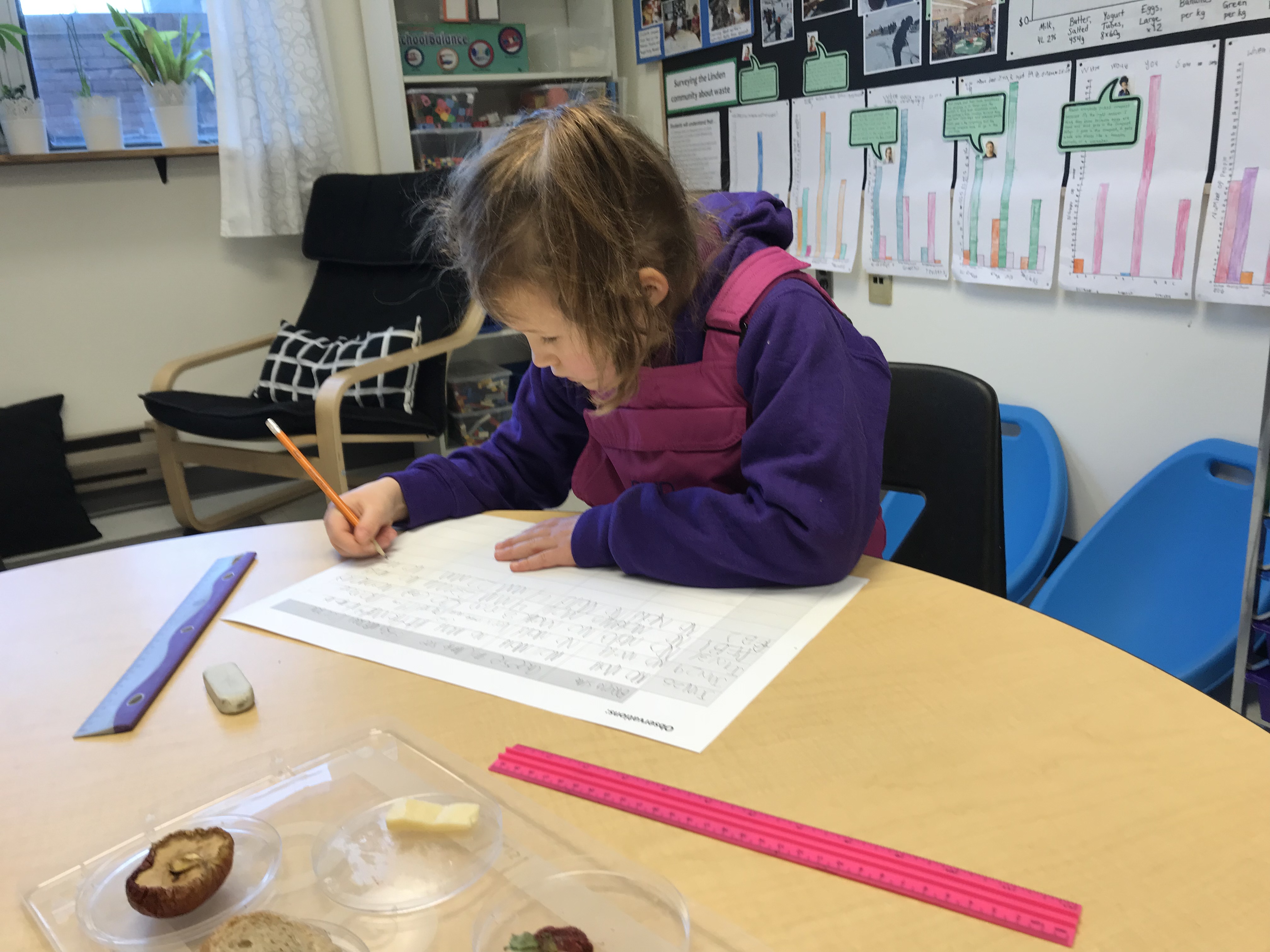 K: “I was doing my mold measurement for my science experiment before Skate Day. I use a ruler to measure the mold and then I write it down on my piece of paper. So far, the strawberry has lots of furry mold.” 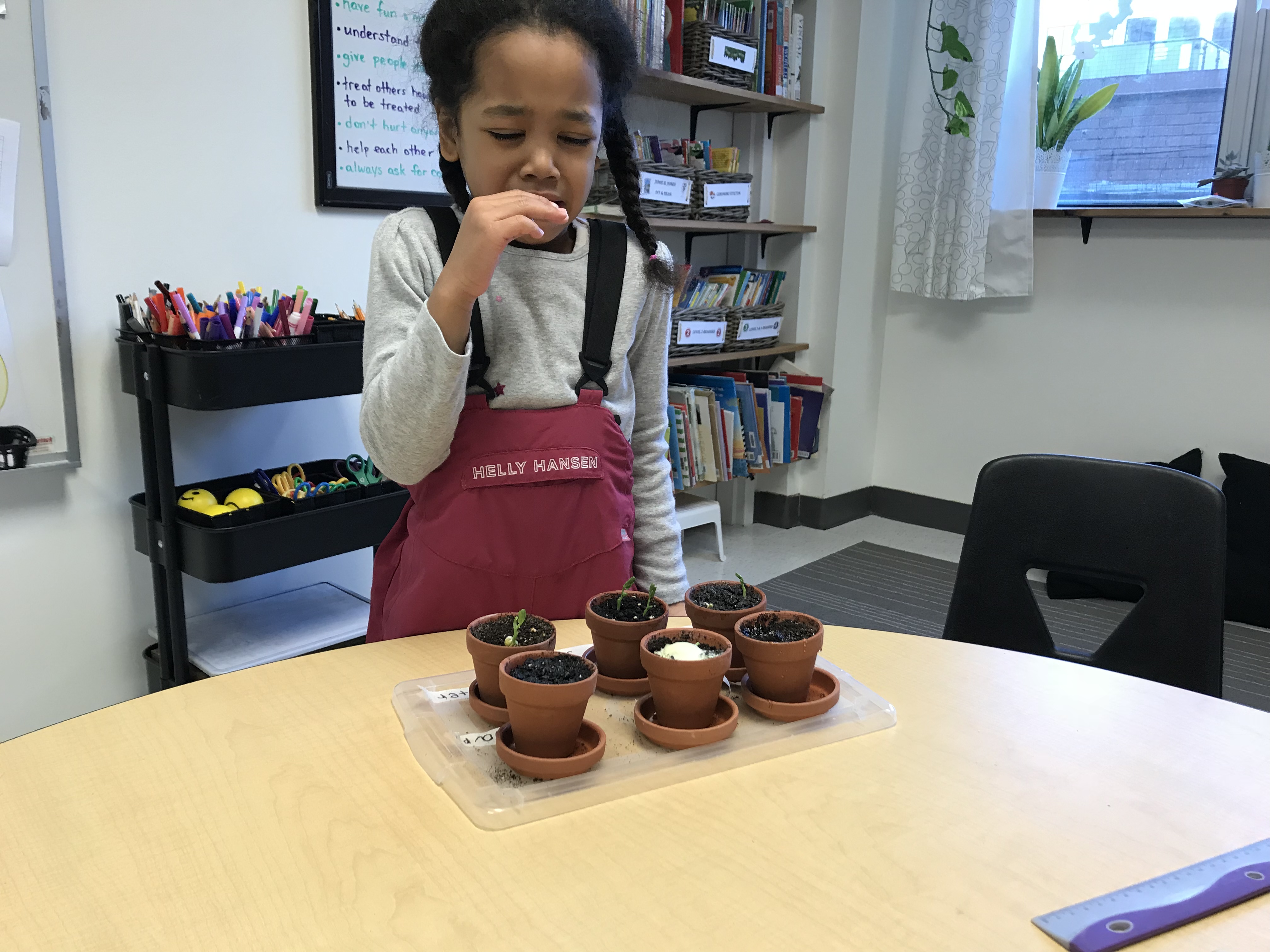 Z: “On Skate Day, I was measuring and watering my plants for my science experiment. I smelled the plant I had been watering with milk and it smelled disgusting! I think this is because the milk was not in the fridge. When milk is not in the fridge, it smells and goes bad.” 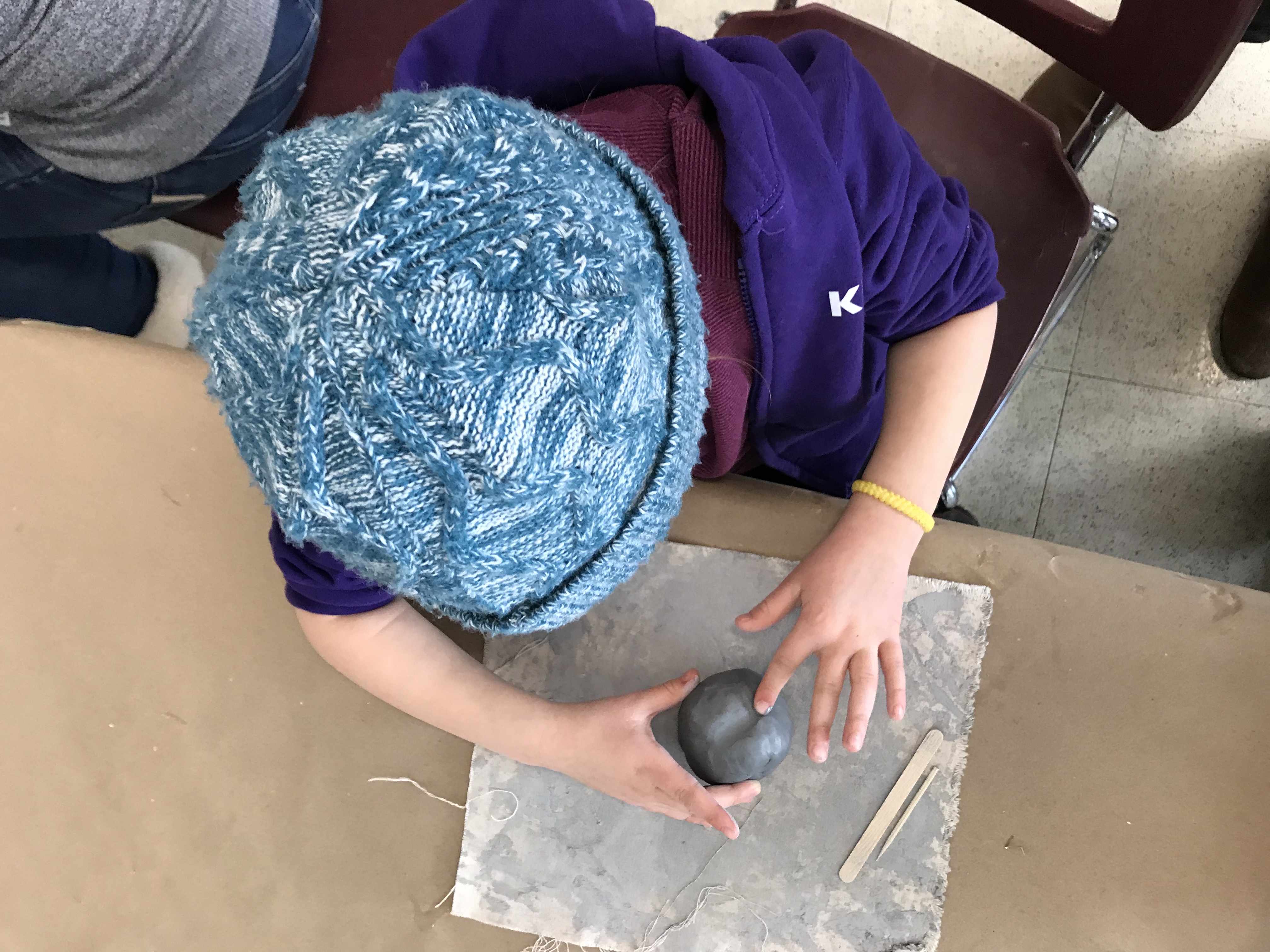 K: “I was smoothing the ball of clay with my wet finger. We were making clay sculptures of animals at Harbourfront Centre.” 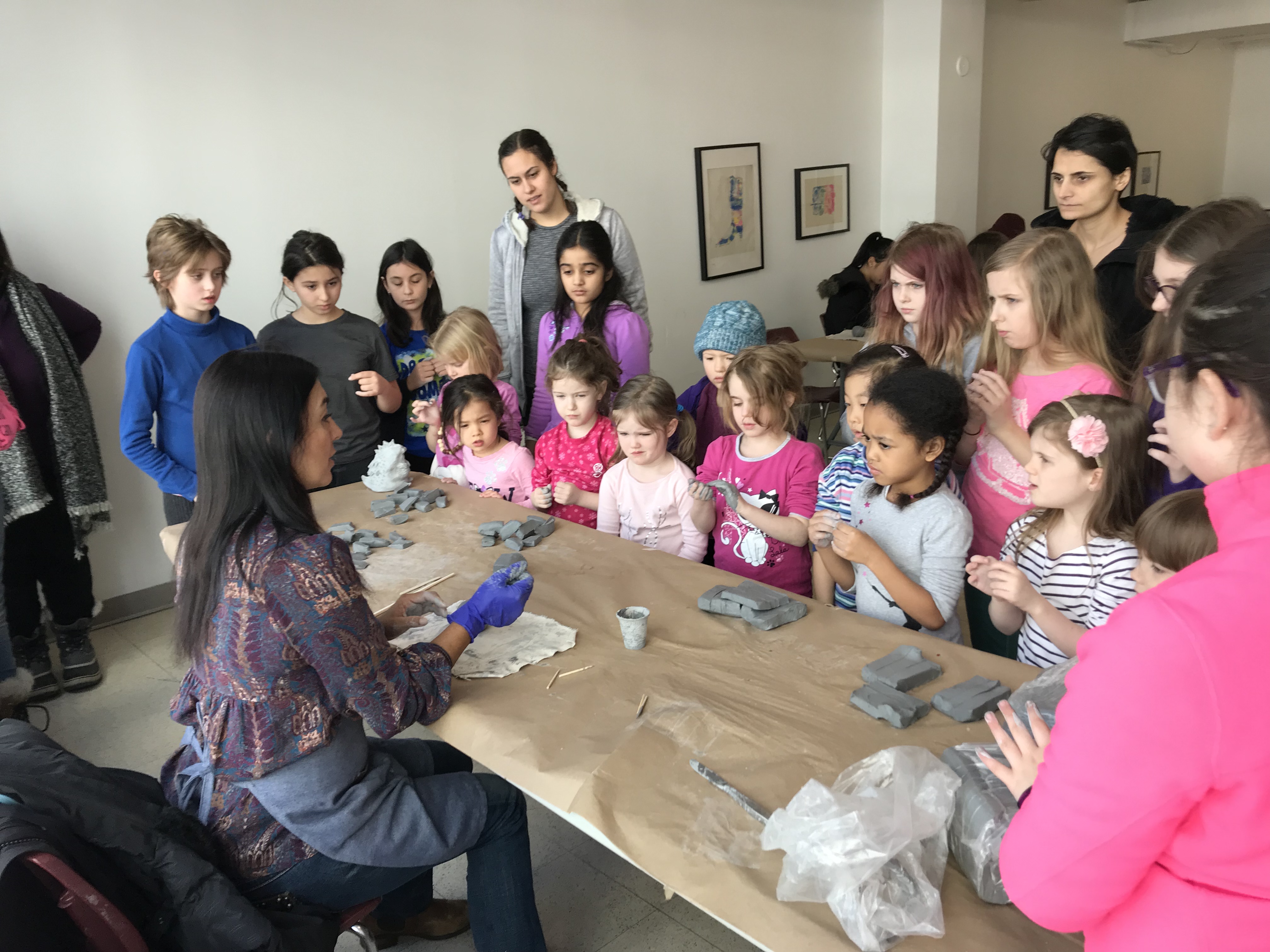 G: “At Harbourfront Centre, Alexandra knows how to make animals out of clay. She taught us that the first step is to pat a big piece into a ball. Then to attach things, you had to scratch it, wet it, stick it, and then smooth it. If you didn’t do that, when you picked it up, it would break.” 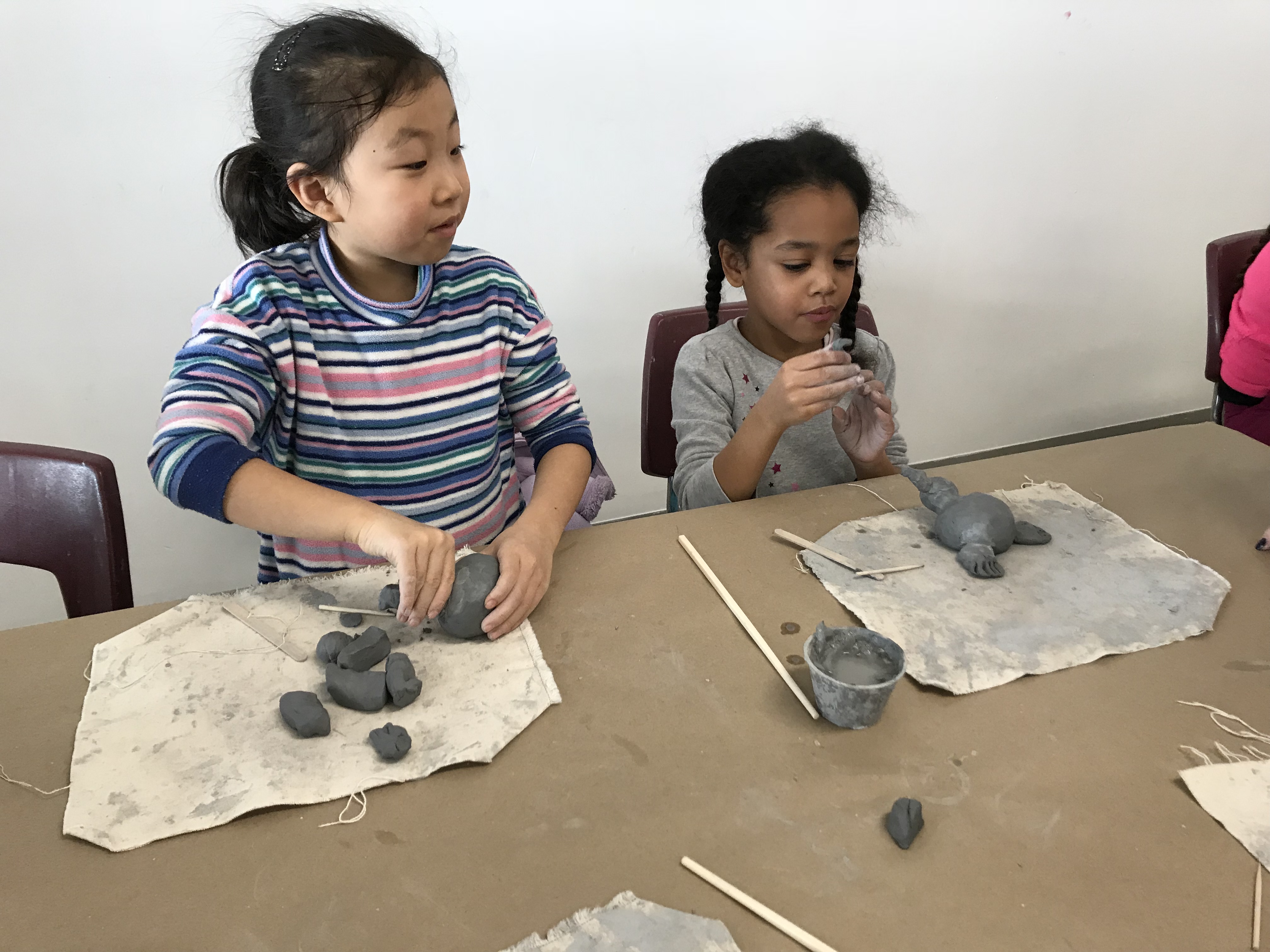 Z: “At Harbourfront Centre, M and I were making a giraffe and a bunny. Soteira asked me to give some of my extra clay to M because her neck was falling down because it was too thin. I did and it was up, not drooping down anymore.” 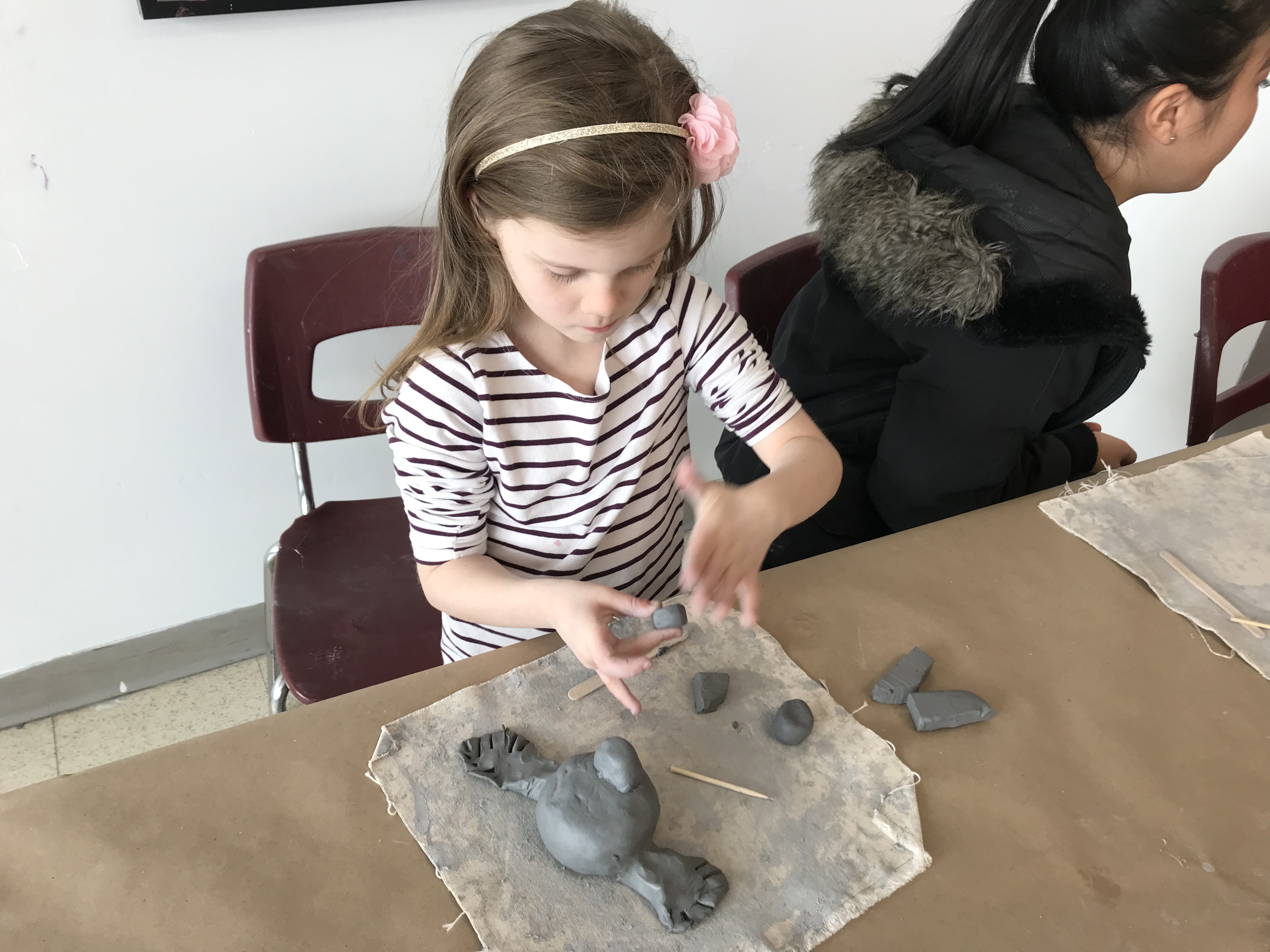 G: “I was making a pegasus giraffe. It’s a type of horse that has wings. I started with the legs and I took some pieces and then I made the toes and made the other toes. Then for the head, I made little squares and I stuck them on. Then I made lots of other parts for the face. Last, I made the wings. When I was done, I made some decorating streaks and I was having fun.” 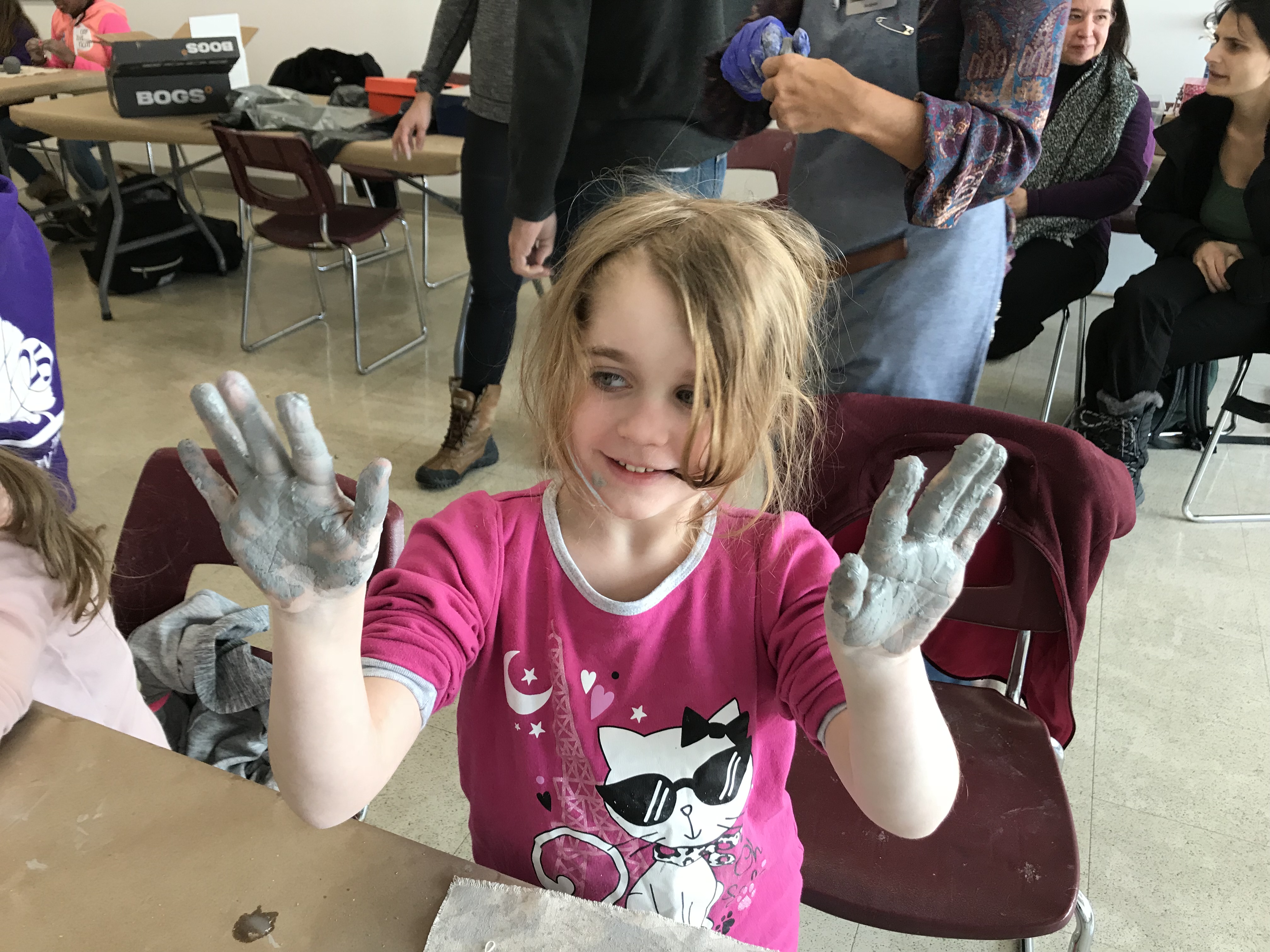 M: “I was making my clay sculpture and I got really messy hands because I was trying to make it a nice shape. I got clay all over my hands because it was so very sticky.” 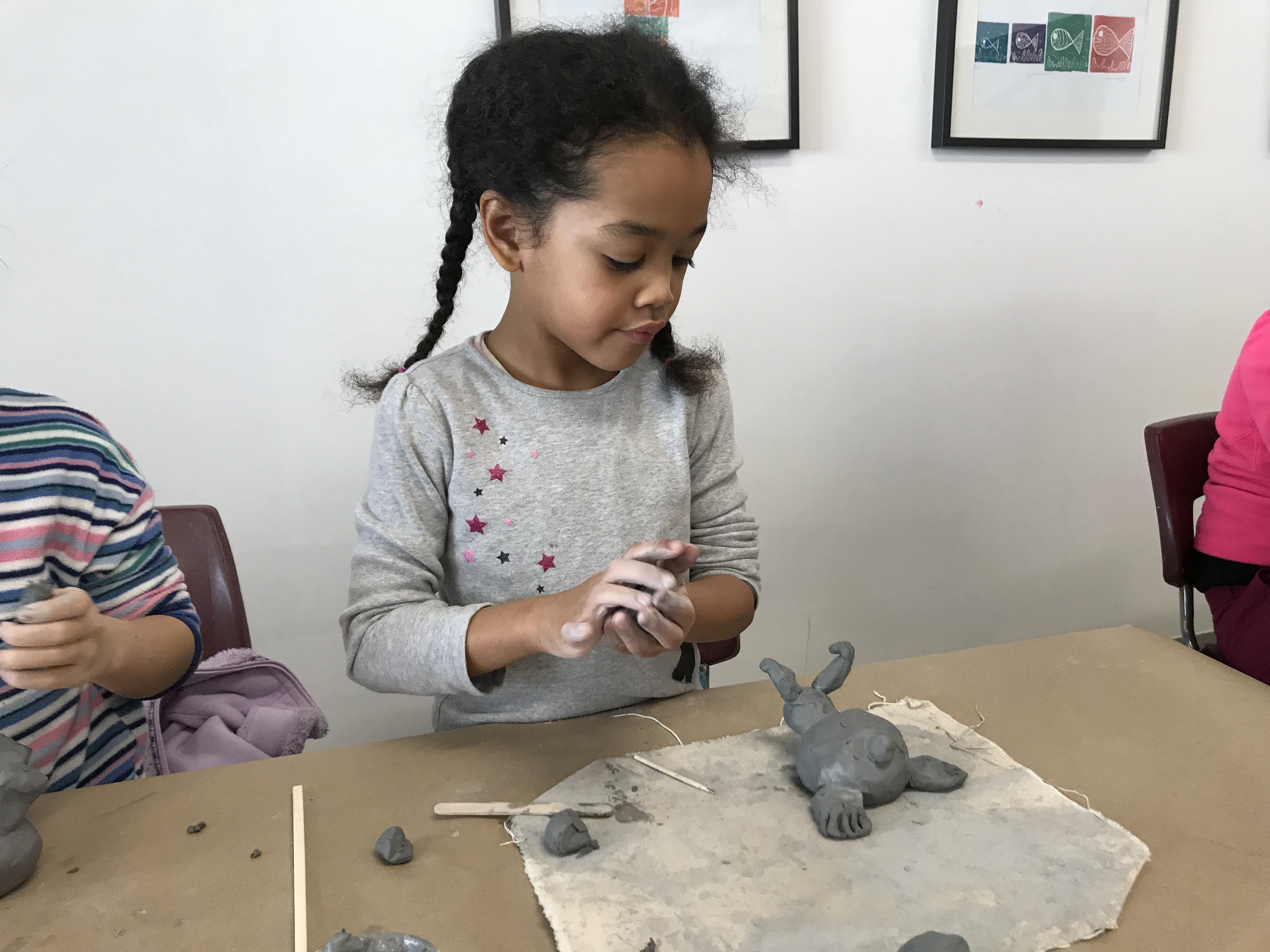 Z: “At Harbourfront Centre, I made a bunny and I made ears for it. One was sticking up and one was flopping down. I did that on purpose because when a bunny hears something, they flop their ears down. I made a fuzzy tale in a ball and it was very hard for me but I made a habitat for it at home. I also made a carrot and food for it.” 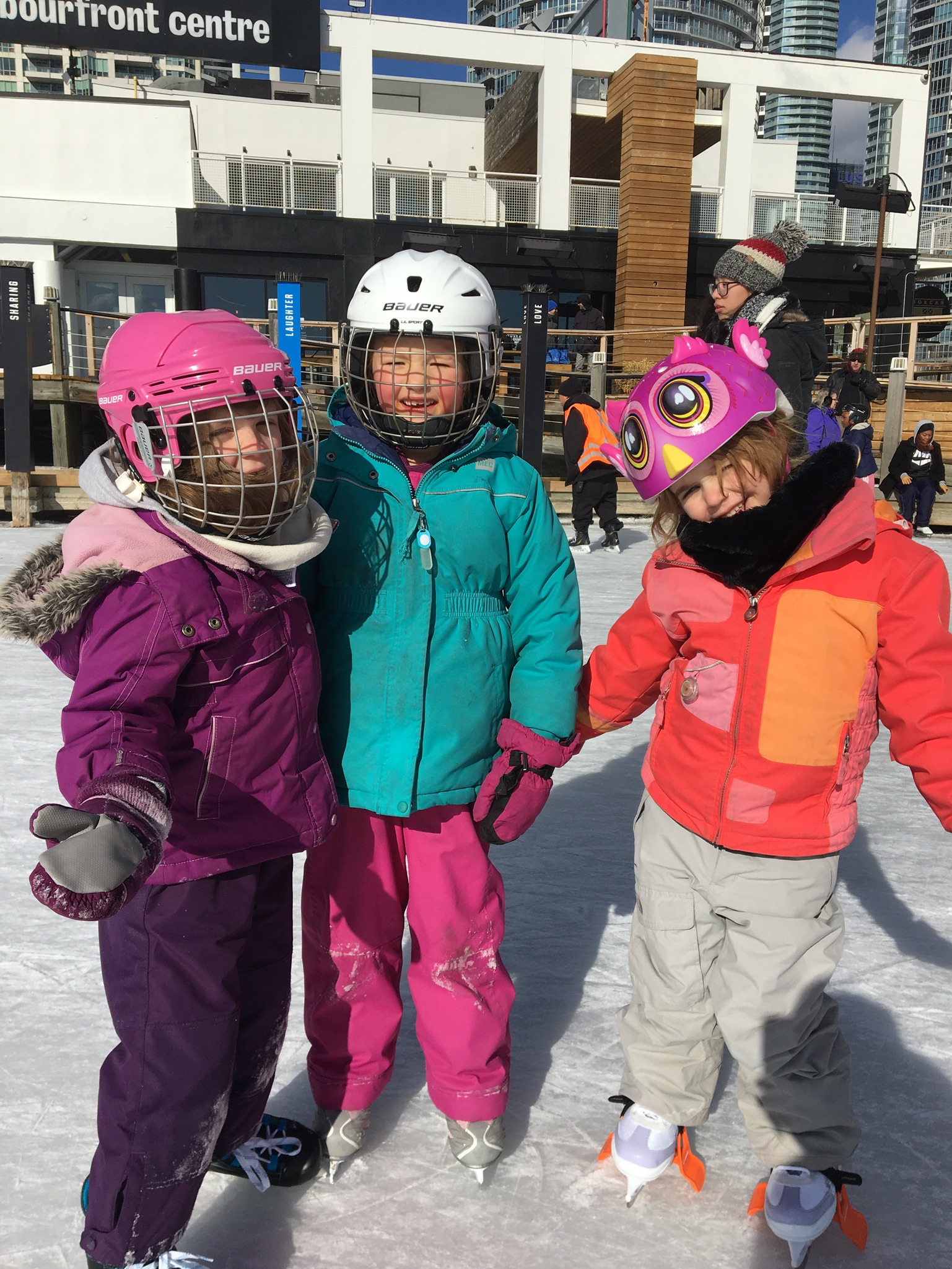 M: “We were skating at Harbourfront Centre and I felt very very very happy. It was only my second time skating and it’s very exciting that I go so fast. That was very surprising for me. K and G were with me in the picture and were having a really fun time. Sometimes we fell when we were skating but we got back up.” 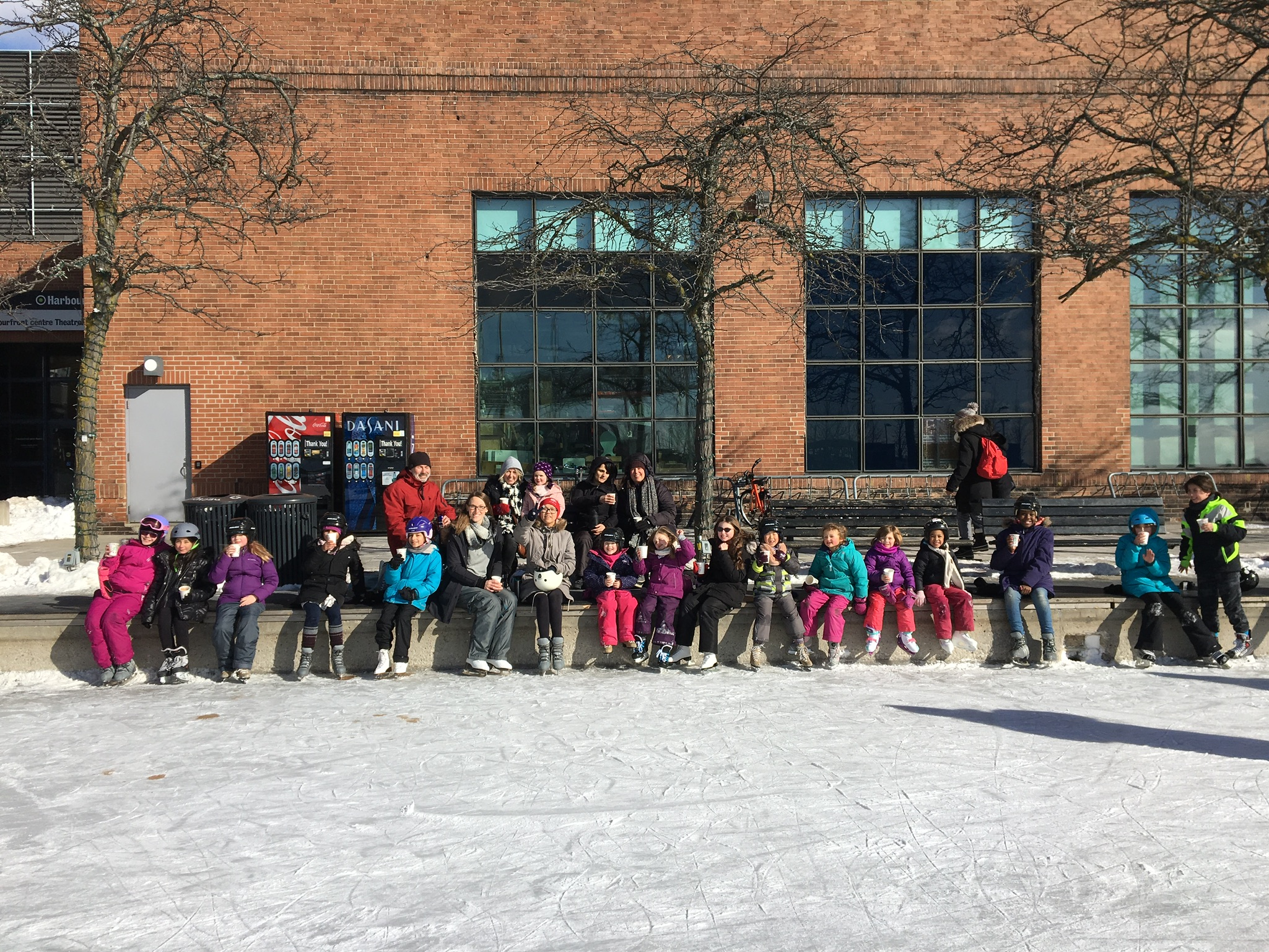 M: “On Skate Day, we went to the Harbourfront Centre and we were practicing. Soteira, Savannah, and Liana helped us learn how to skate. This time, I learned how to spin in a circle because Liana taught me and helped me. Now I’m really excited to go again because I can show my dad and he will be very surprised and proud of me.” 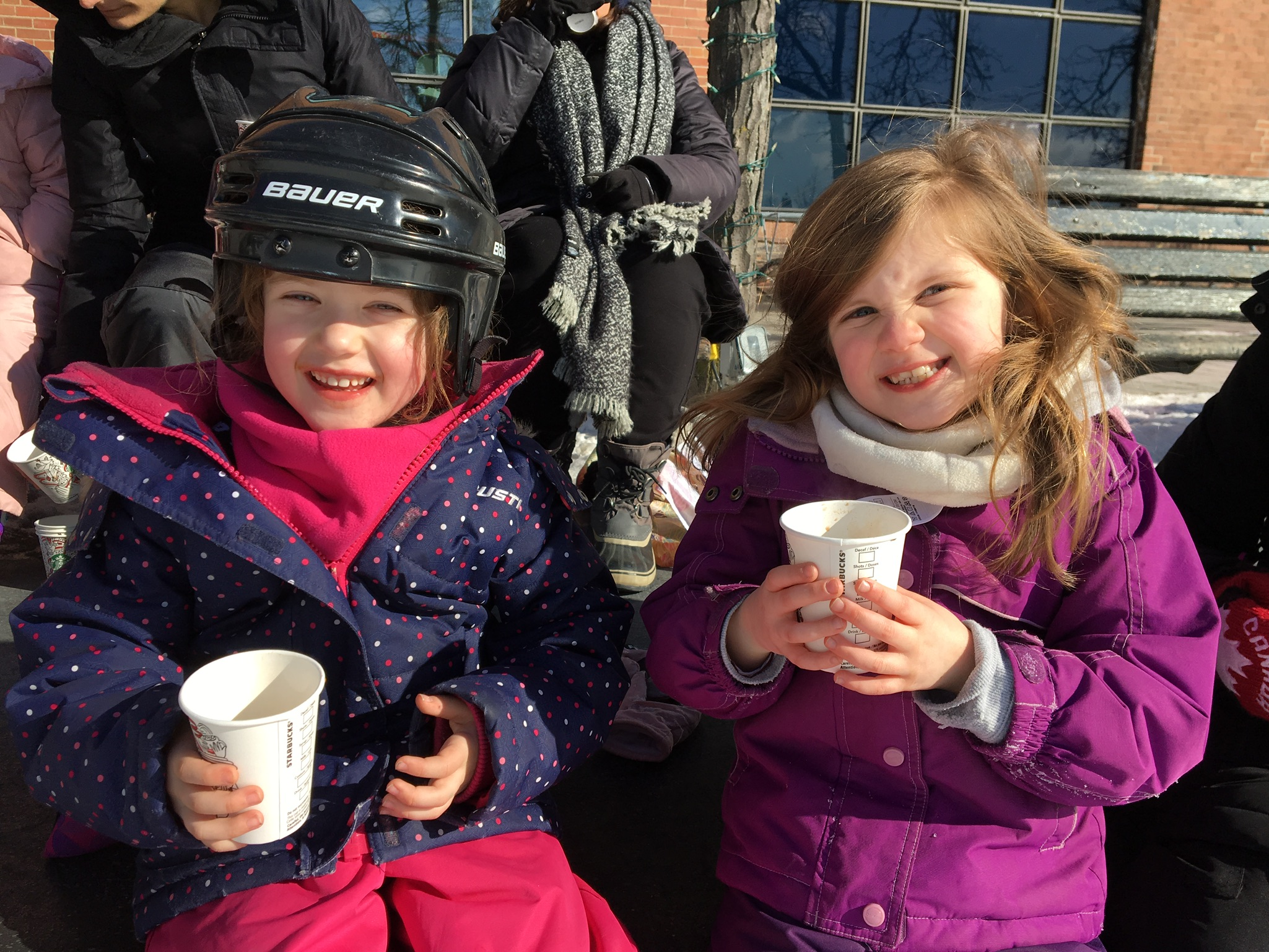 G: “K and I were having hot chocolate because it was very cold outside when we were going skating. Our teachers decided to bring us hot chocolate to help us feel warm and cozy. It was cold but mostly fun.” 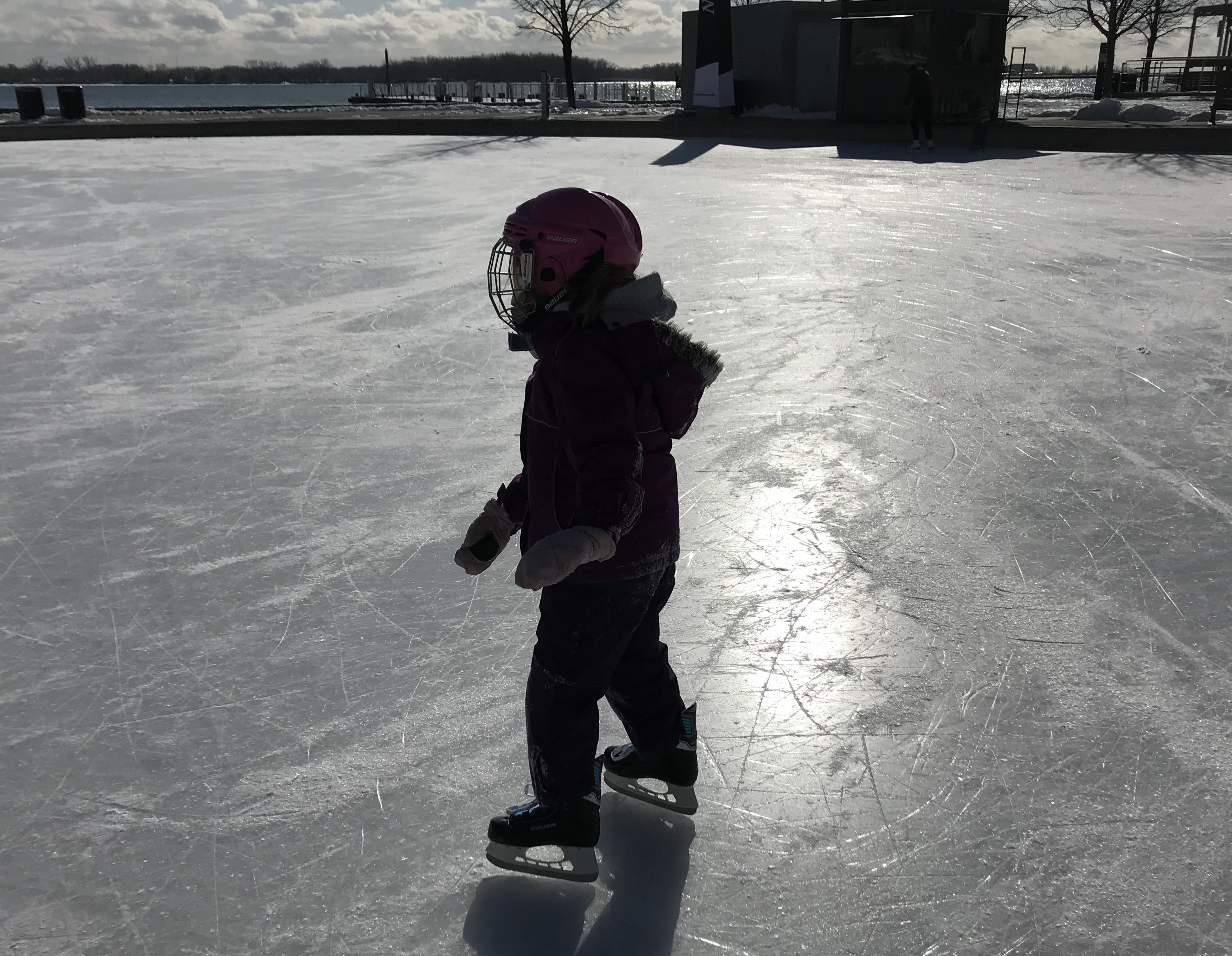