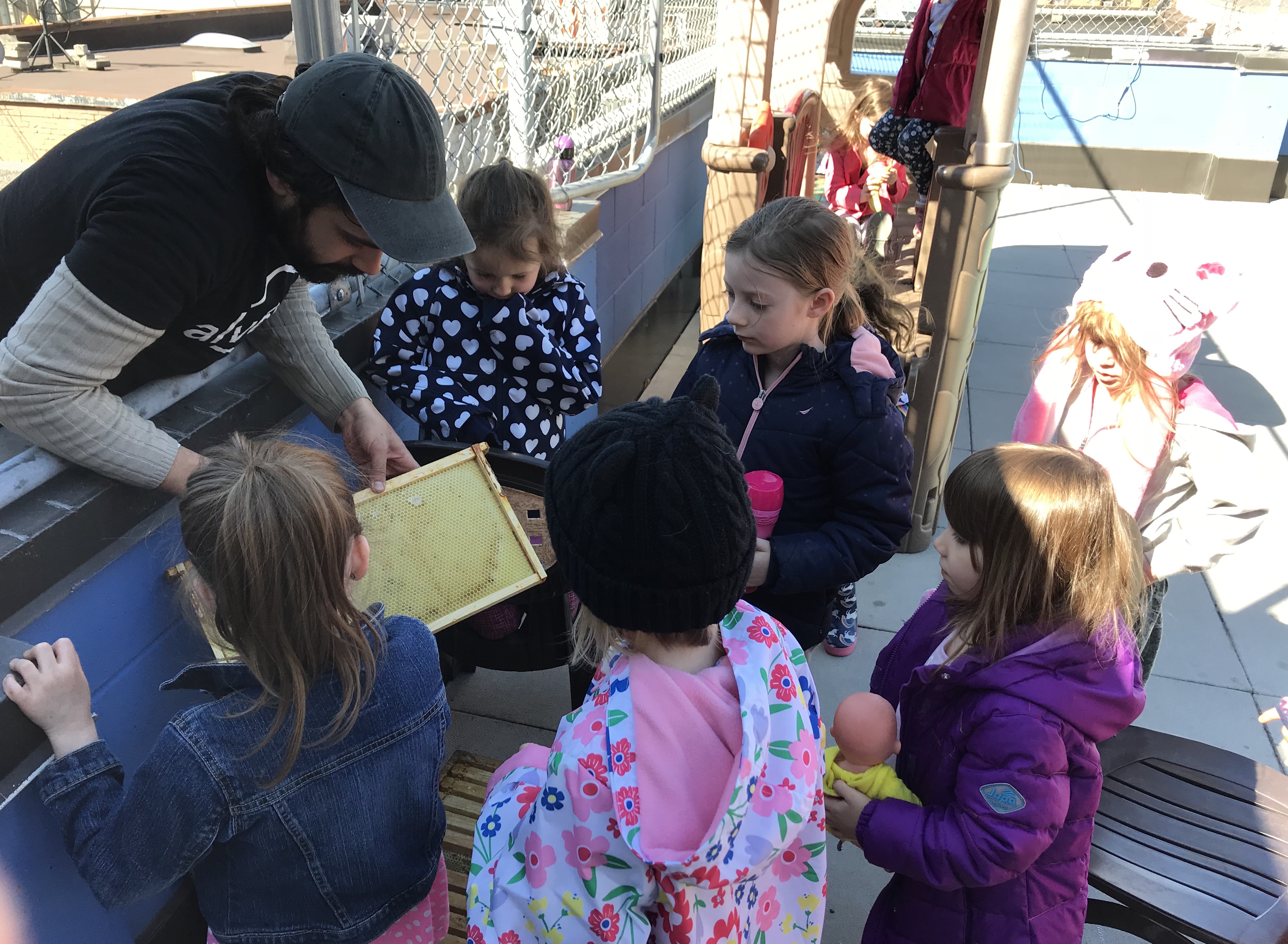 April has been a birthday-filled month in our classroom! We enjoyed celebrating two birthdays this week and unsurprisingly, the birthday party theme is also showing up in our Junior Drama Night script. After brainstorming the major plot points and characters with the Early Learners, the Grade 1-2s have taken the lead on writing the script for our play next month. The girls are very proud of all the progress they've made on it and hope to finish it next week. Writing the script together has been a great opportunity to practice communication skills, collaborative writing, and the creative use of voice. On Monday this week, we finally got our visit from Patrick the Beekeeper who opened our winterized rooftop hive for the first time this year. The Grade 1-2s were very happy to hear Patrick's report of how healthy and happy the bees were and they are already buzzing with plans to have another jar of Linden rooftop honey in the fall. In CERES class, the collaboration continued as students worked in teams to construct a protective case for an egg during their Egg Drop Challenge. We also continued thinking about environmental stewardship this week, thanks to an all-school organized by the Environment Club. Students in Grade 1-2 worked together to design graphics that they collaged onto the outside of our classroom waste bins to help with proper sorting and waste management. They also watched a short clip of a documentary about a village in Japan called Kamikatsu where a highly specified recycling program has allowed citizens to produce zero garbage. Finally, we wrapped up our fundraising efforts for the MS Society of Canada this week. Students in the Grade 1-2 class were tracking their in-class reading using popsicle sticks and were proud to have collectively read the equivalent of almost 18 hours this month! A big thank you to all the families who supported this initiative at home too. 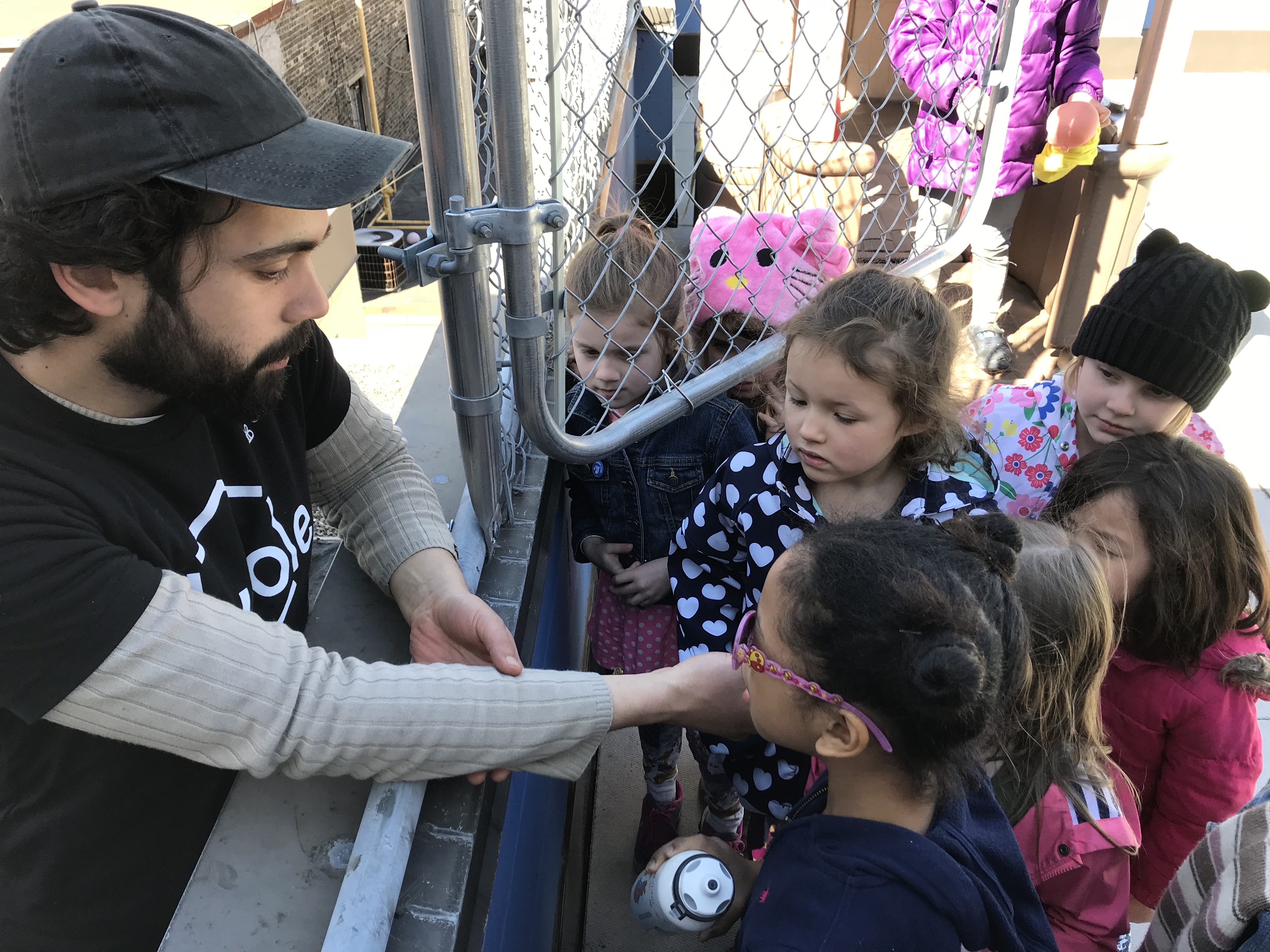 G: “We are with Patrick the beekeeper. He is in charge of all the bees except the queen. Every time that he opens the beehive, he’s checking if the bees are okay.” 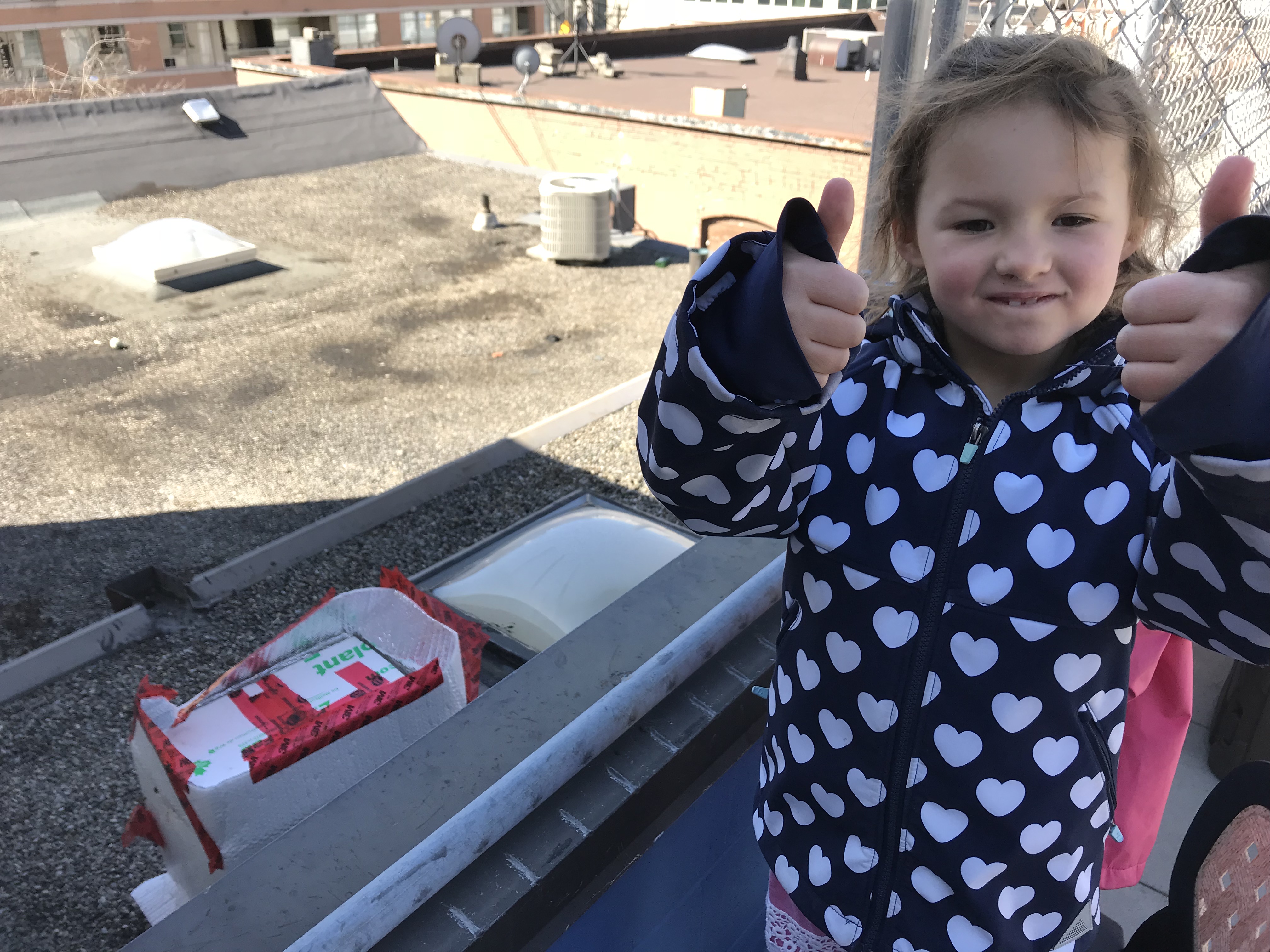 K: “I am doing a thumbs up because after the winter, the bees are healthy and get to unhibernate. Patrick is a good beekeeper and he takes care of all the bees. Now the queen is making lots of eggs. She’s a busy queen.” 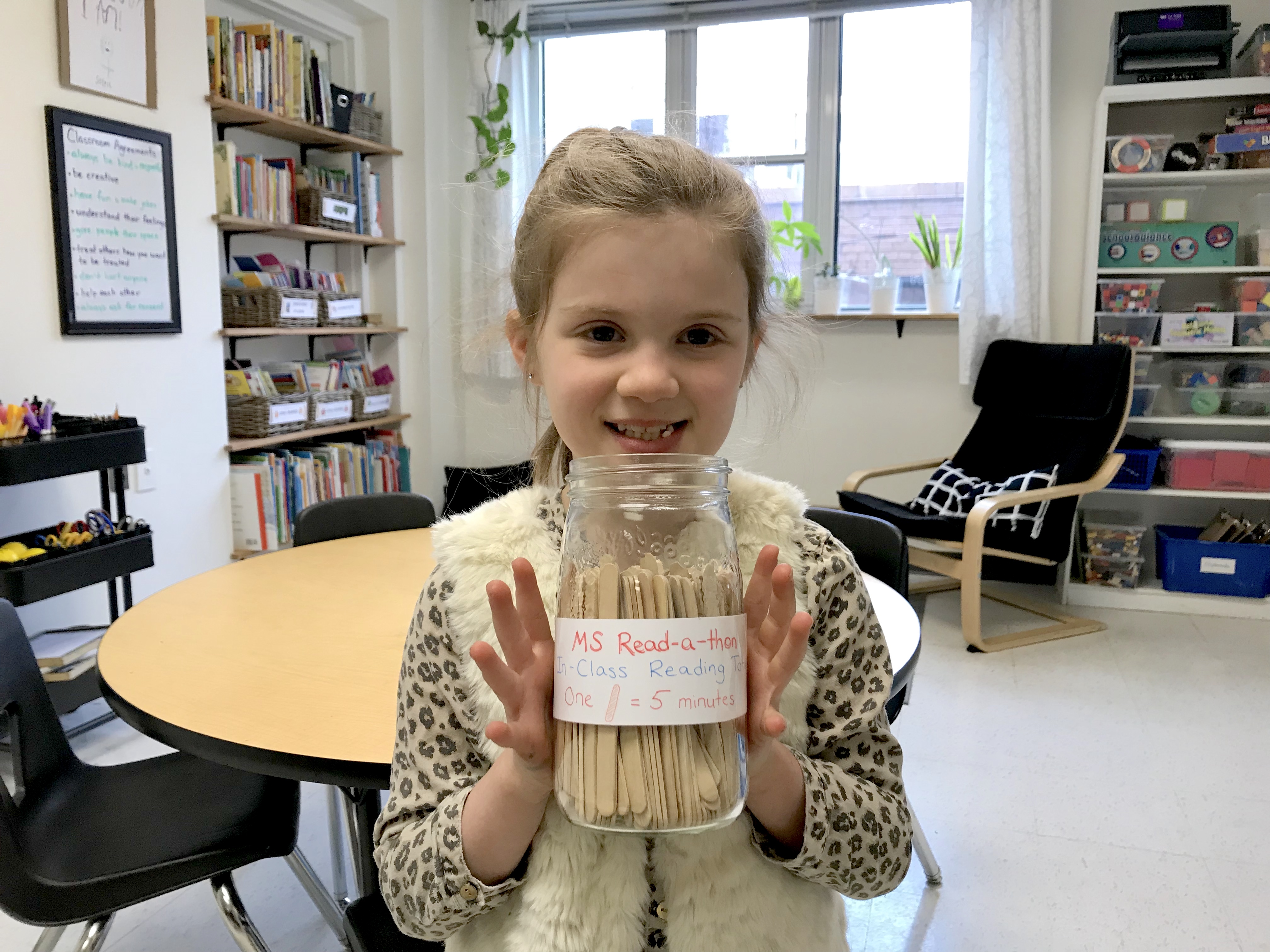 G: “We did so much reading that we got a lot of sticks in our jar for the MS Read-a-thon. If you read for 5 minutes, we get one stick. The jar is so full that we had to push all our sticks in when it’s full.” 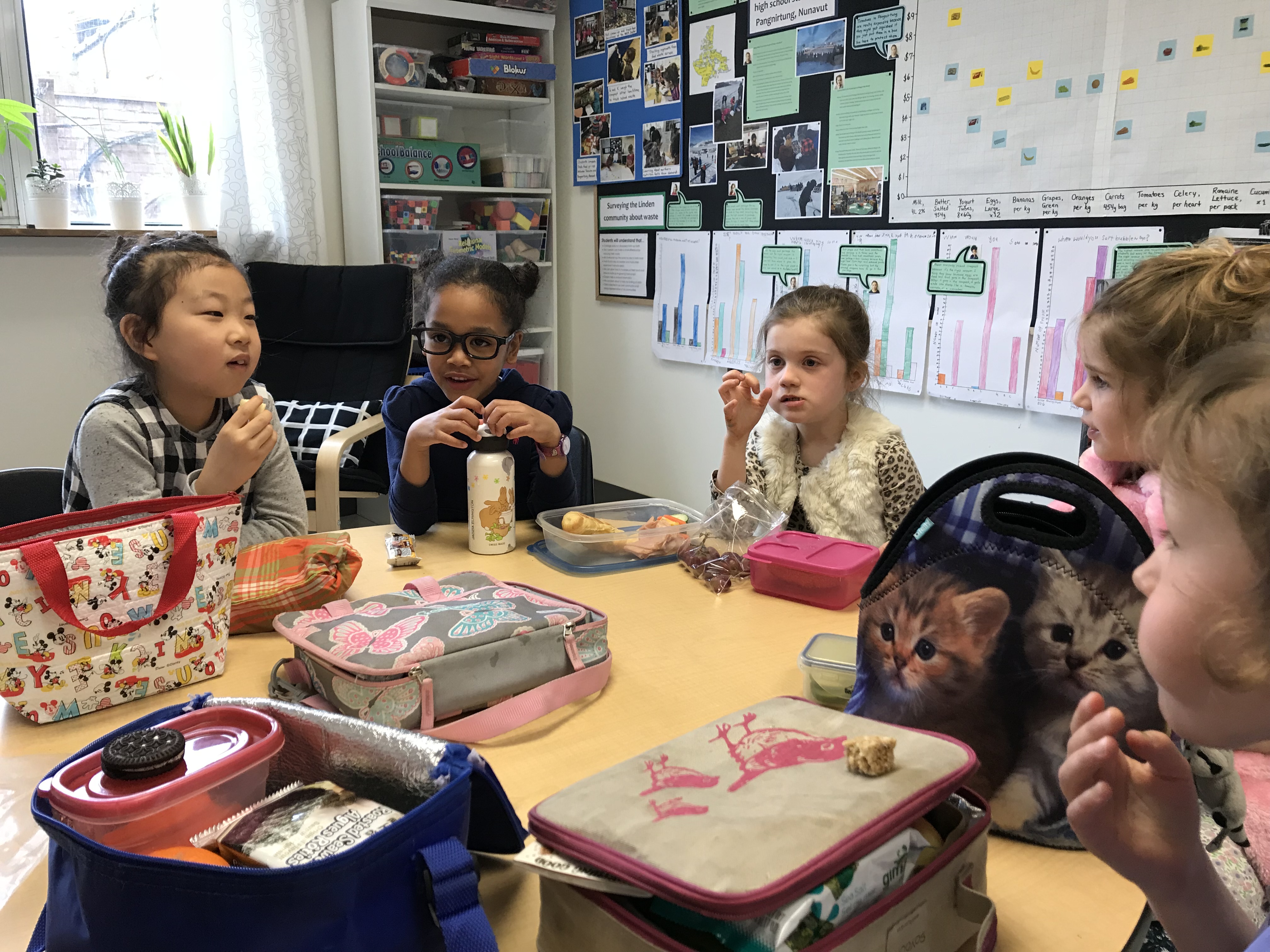 K: “My friends and I are counting by twos during snack time. Soteira was timing us to see how many minutes it would take us to count to 130. It only took us 51 seconds!” 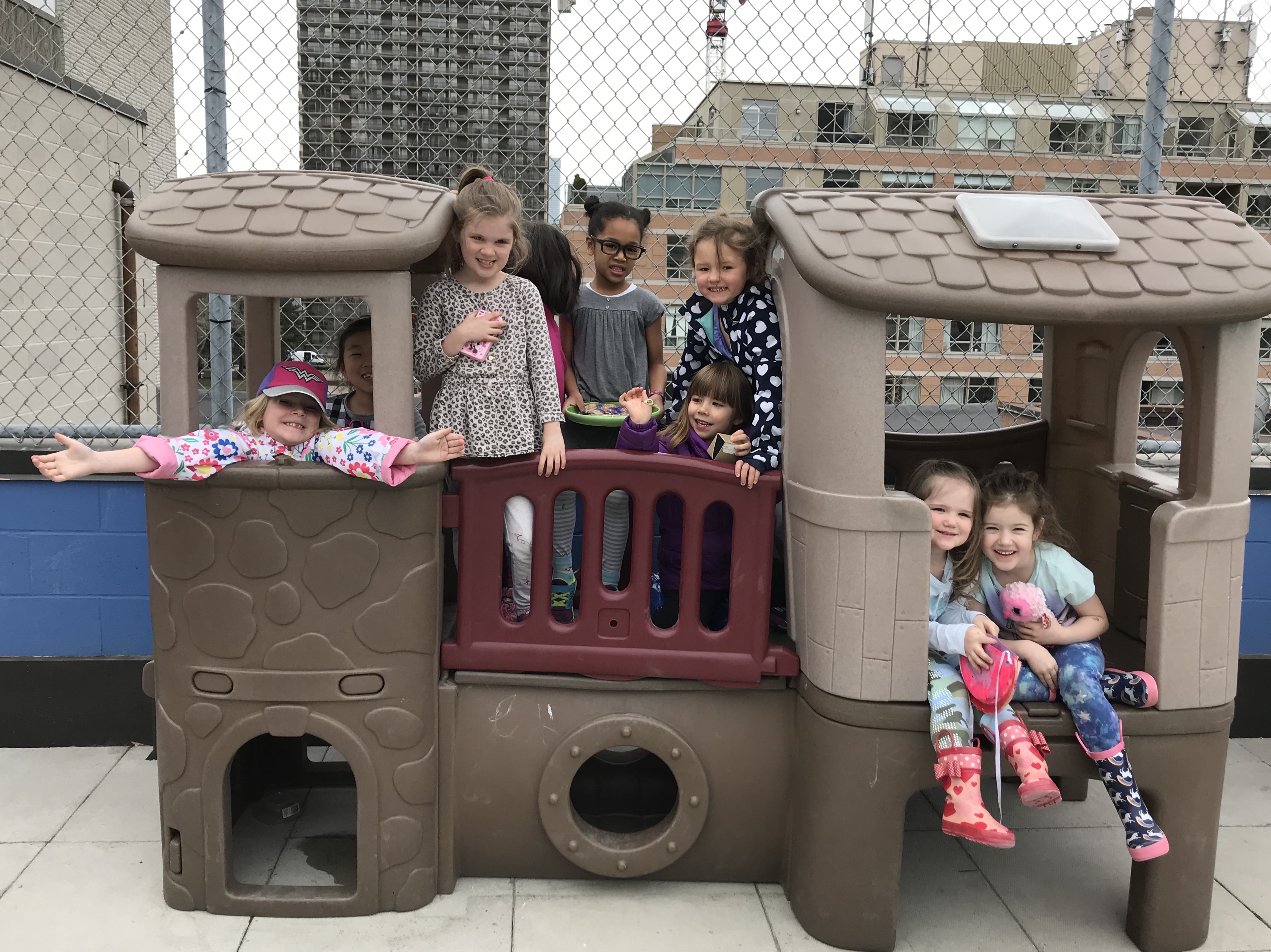 S: “These are the Early Learners and Grade 1-2s and they are all in the playhouse on the roof. It looks really squishy!” 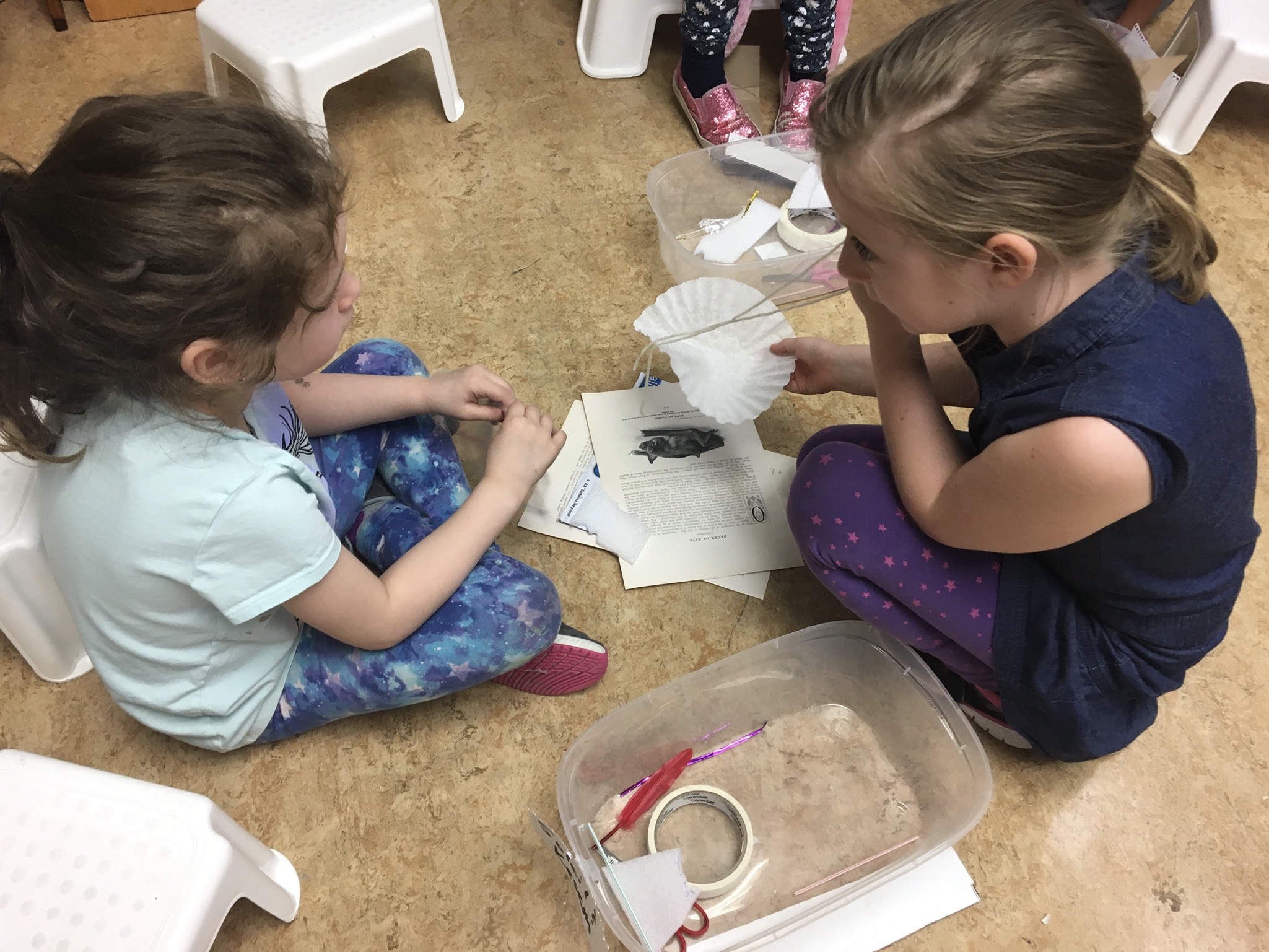 S: “Me and K are making our egg dropping thing in CERES class. We made it out of a piece of cardboard and paper and a plastic bag. Our egg cracked.” 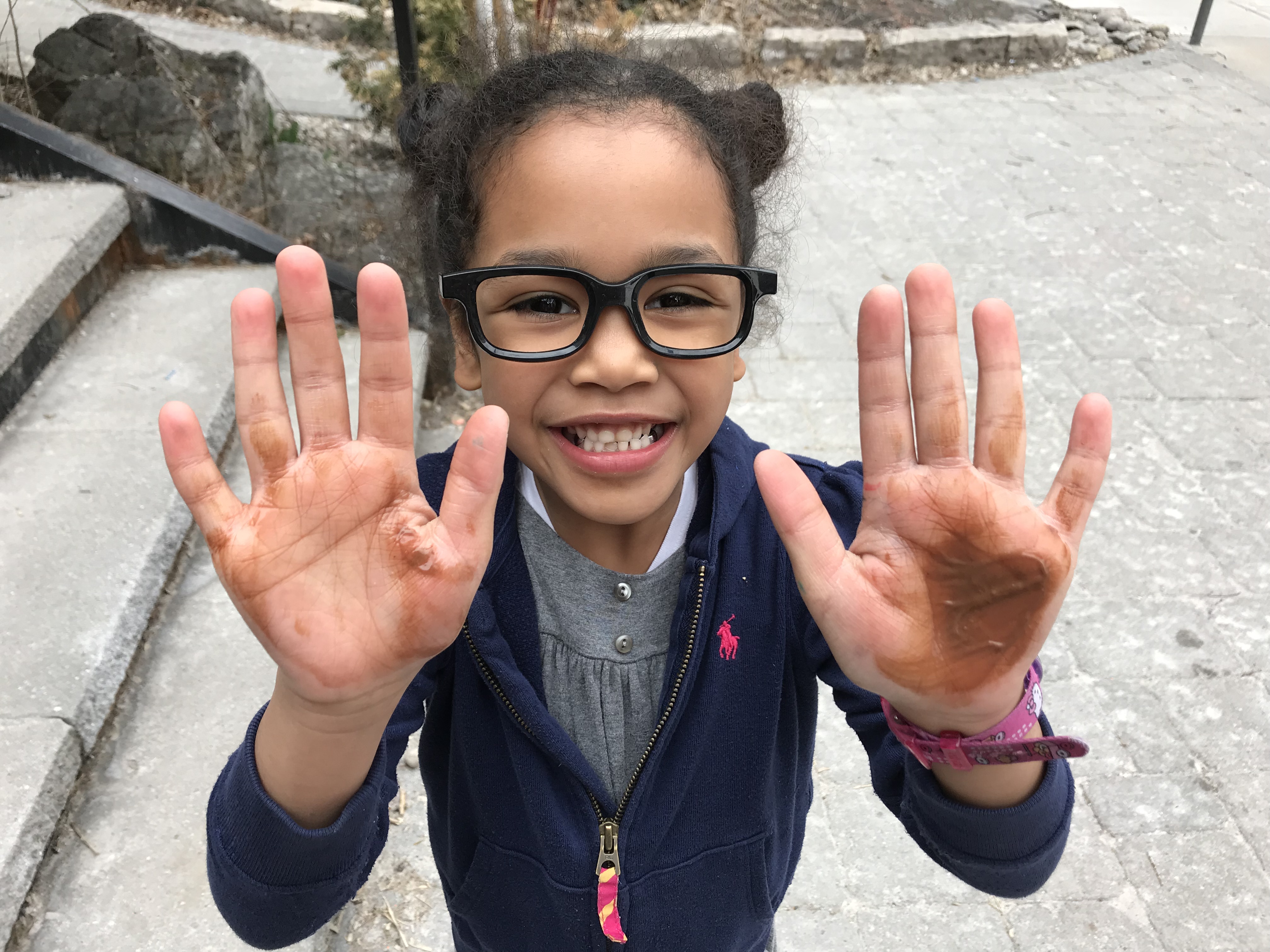 K: “Z had chocolate on her hands after she made chocolate mousse in cooking club.” 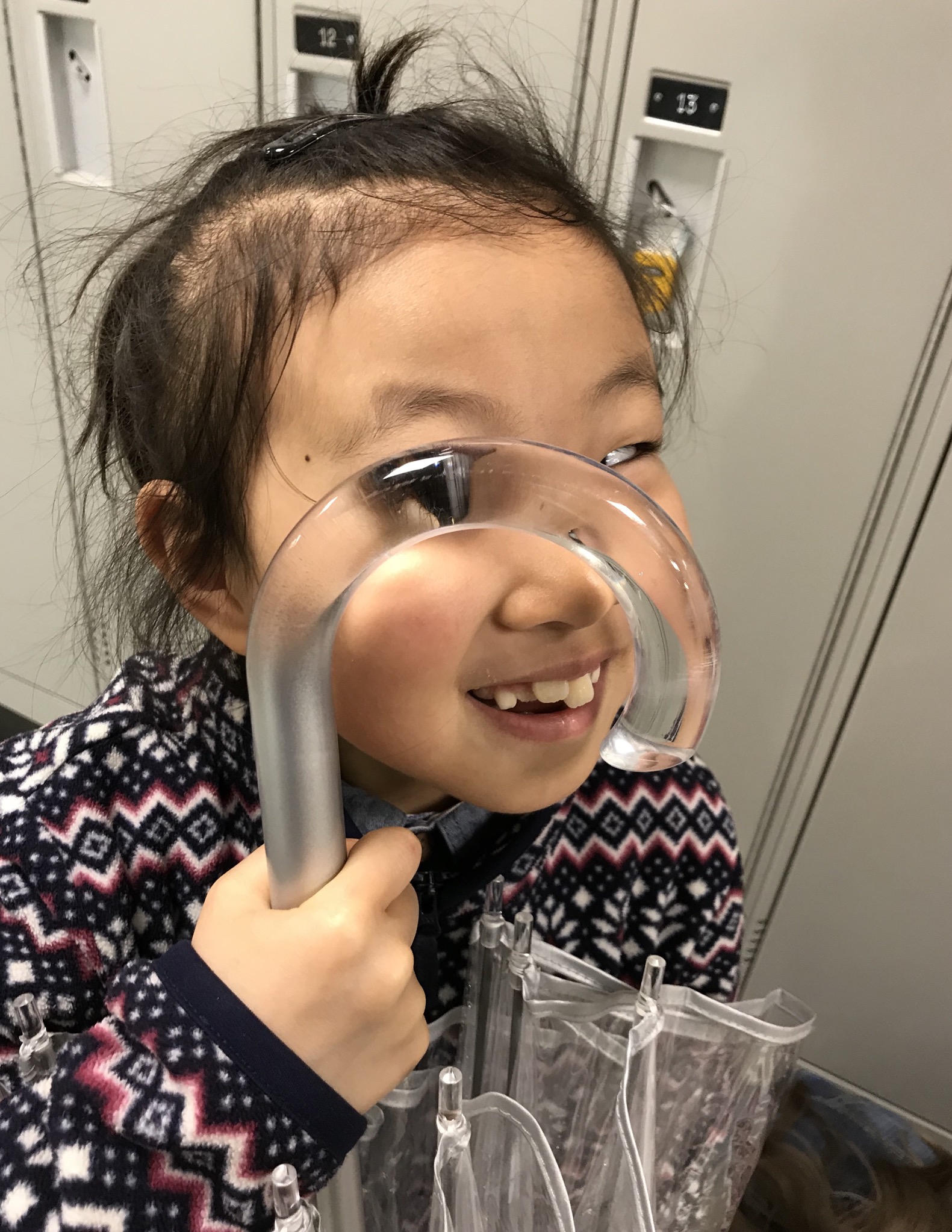 M: “On a rainy day, I asked Soteira if there was water inside the part of her umbrella where you hold it. She said no. And I looked inside because it was really cool and I didn’t know that my eyes would look so big and scary!” 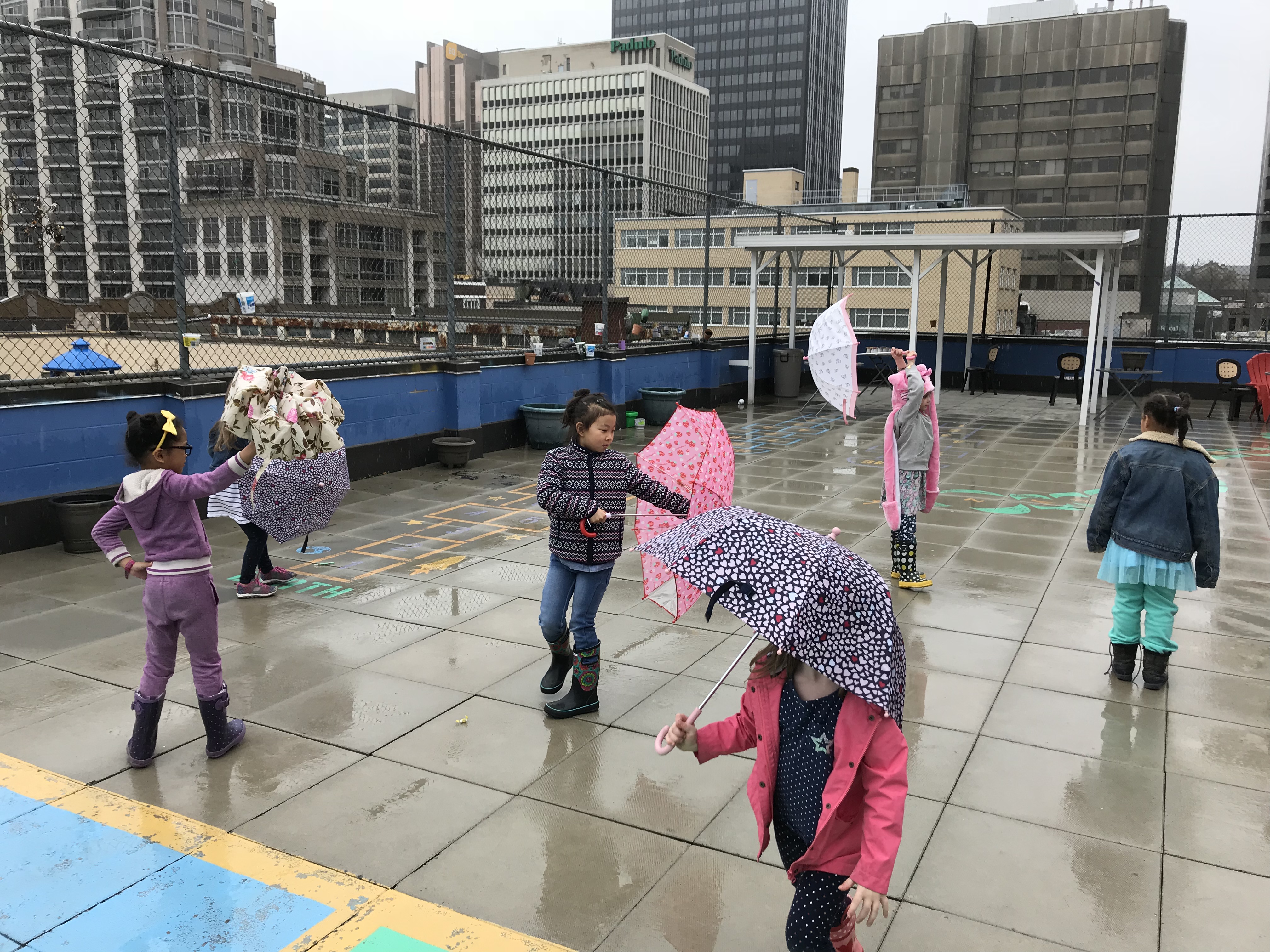 M: “We were on the roof on a very rainy day and we all have umbrellas. We did lots of fun things. S and I found a puddle and had a lot of fun. There’s a part of the roof with drippy things and you can go under it with your umbrella.” 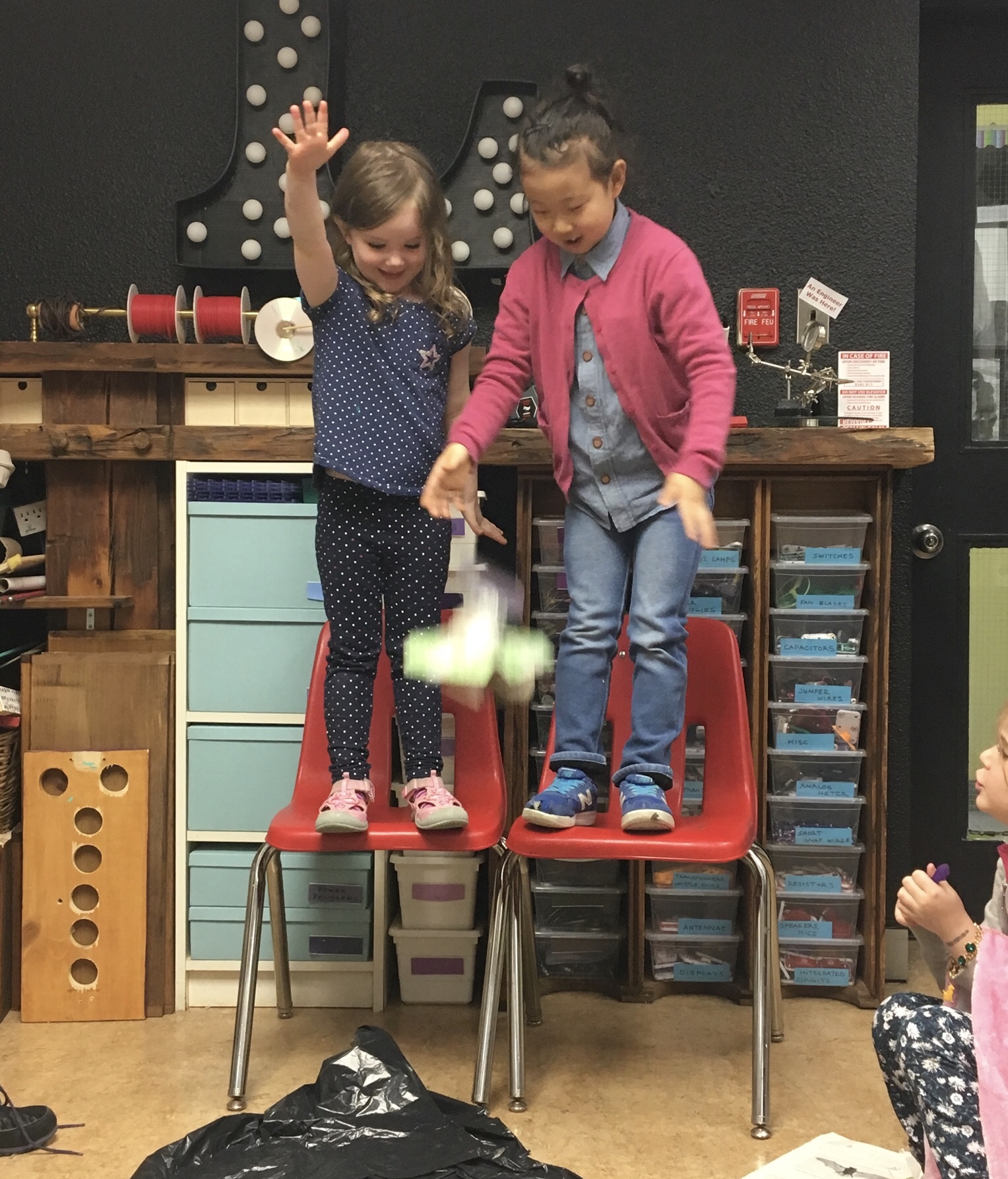 M: “When we were doing the egg drop, we finished our structure to make sure that it wouldn’t crack and I worked with P. I made the part where there is comfy cushions and foam to protect the egg in the basket. I was really scared that the egg might pop but it actually didn’t!” 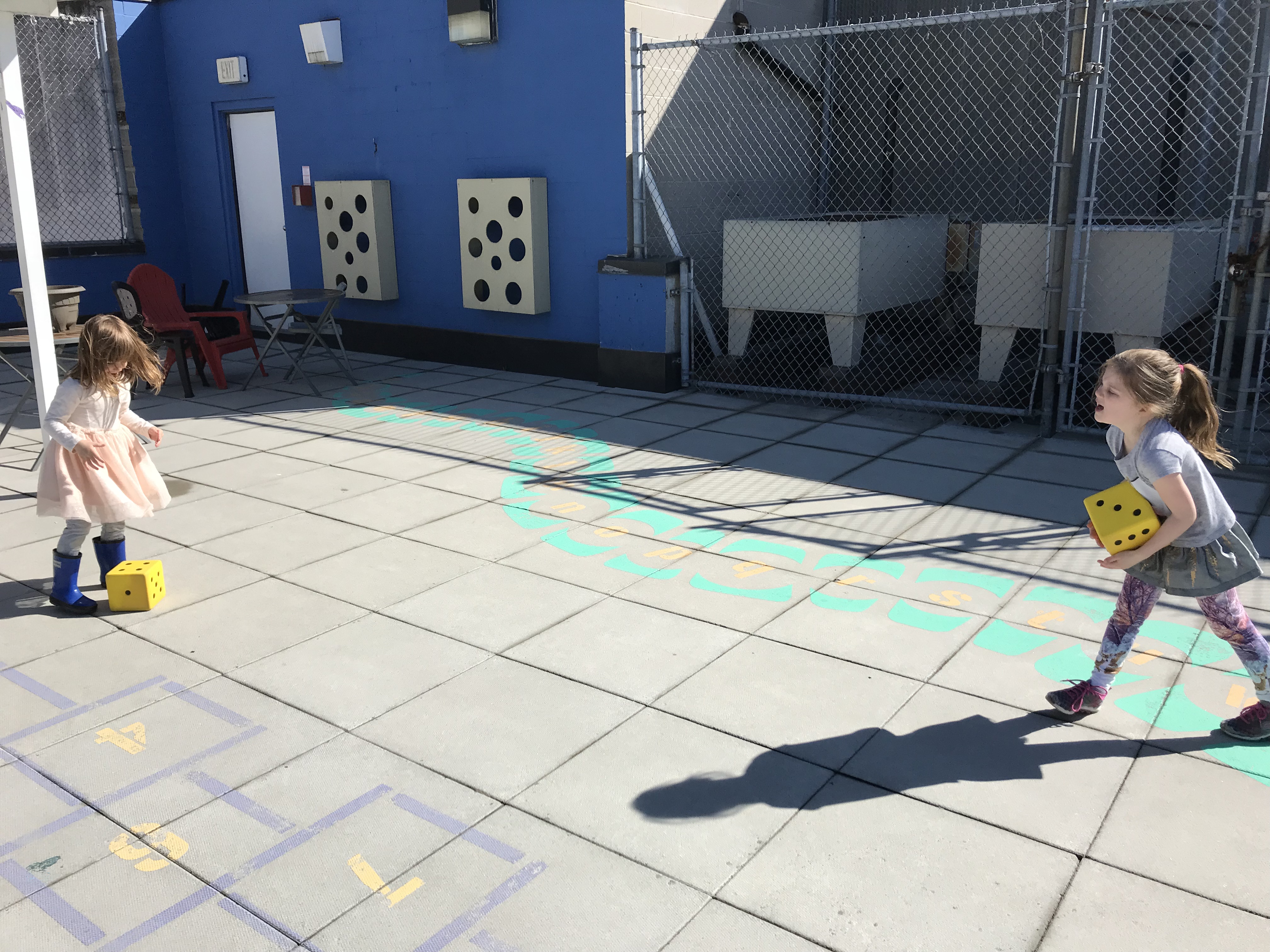 G: “A and I were playing gymnastic dice and A tried to do the same move as me but it was a little bit different. She tried to stand on the dice but she fell a little.” 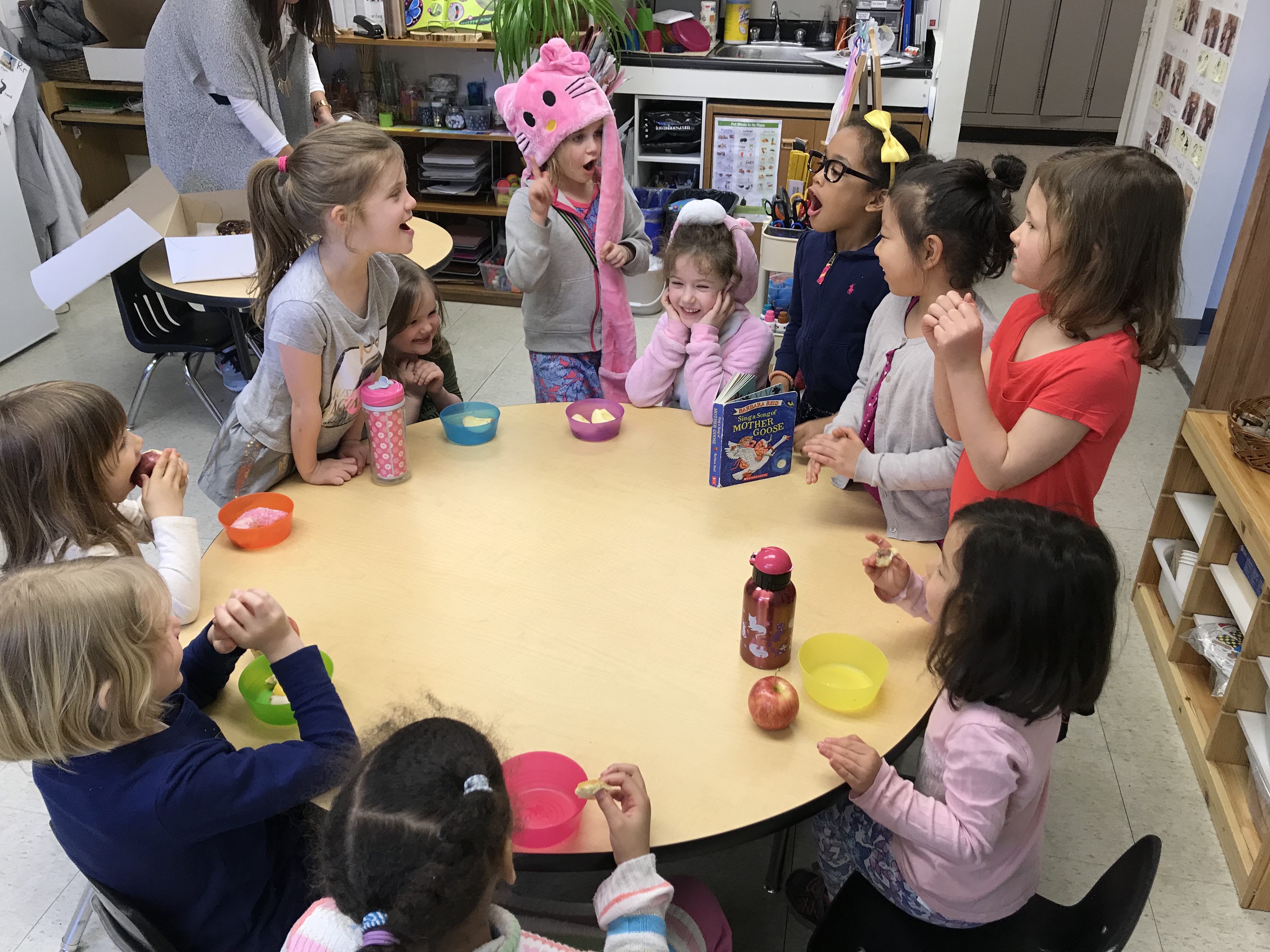 K: “It was K’s birthday and we celebrated her birthday. She was turning six. In this picture, we were singing her Happy Birthday and after that, we got a donut that K brought in.” 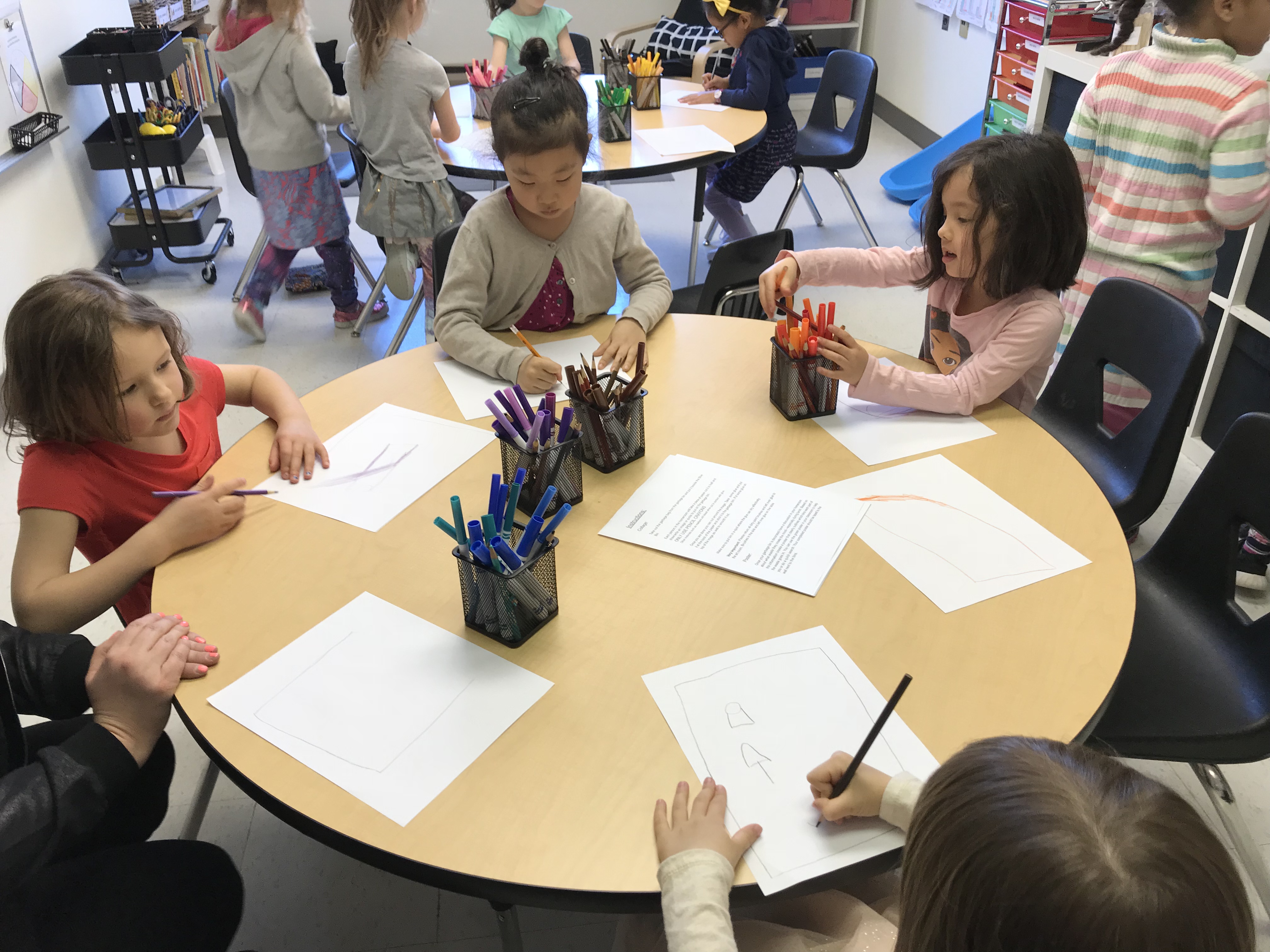 M: “On Earth Day, we were making posters for the garbage cans. They were to help people make less waste. My poster wrote ‘Wonderful waste’ and had lots of pictures.” 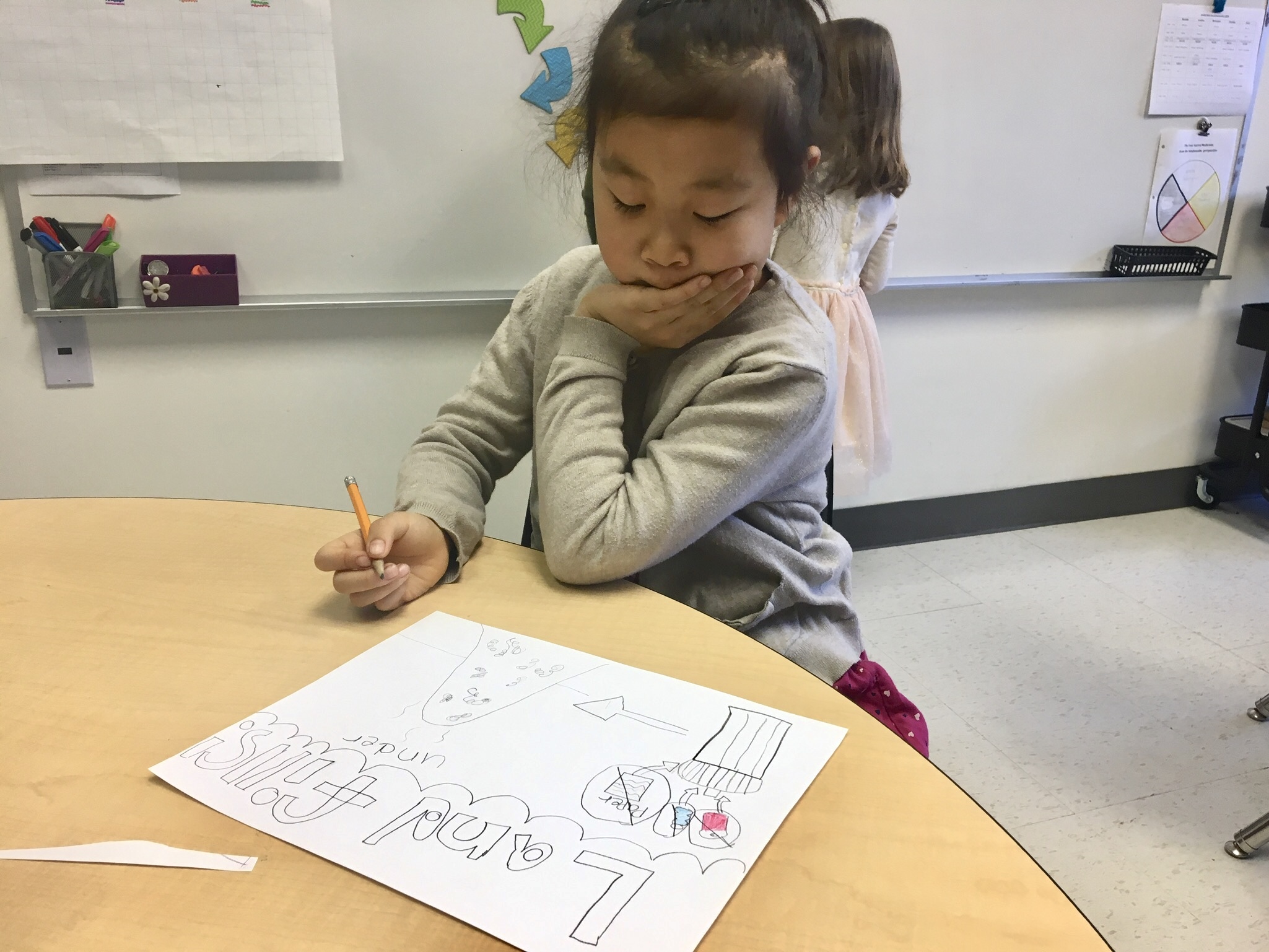 M: “On Earth Day, we made a sign for our garbage bin and I drew a picture that says ‘Landfill’ with bubble letters because I wanted people to know that landfills are kind of bad. For the garbage picture, I put pop bottles and paper to show people that they shouldn’t go in the landfill. We also watched a video about a Japanese village which made zero waste.” 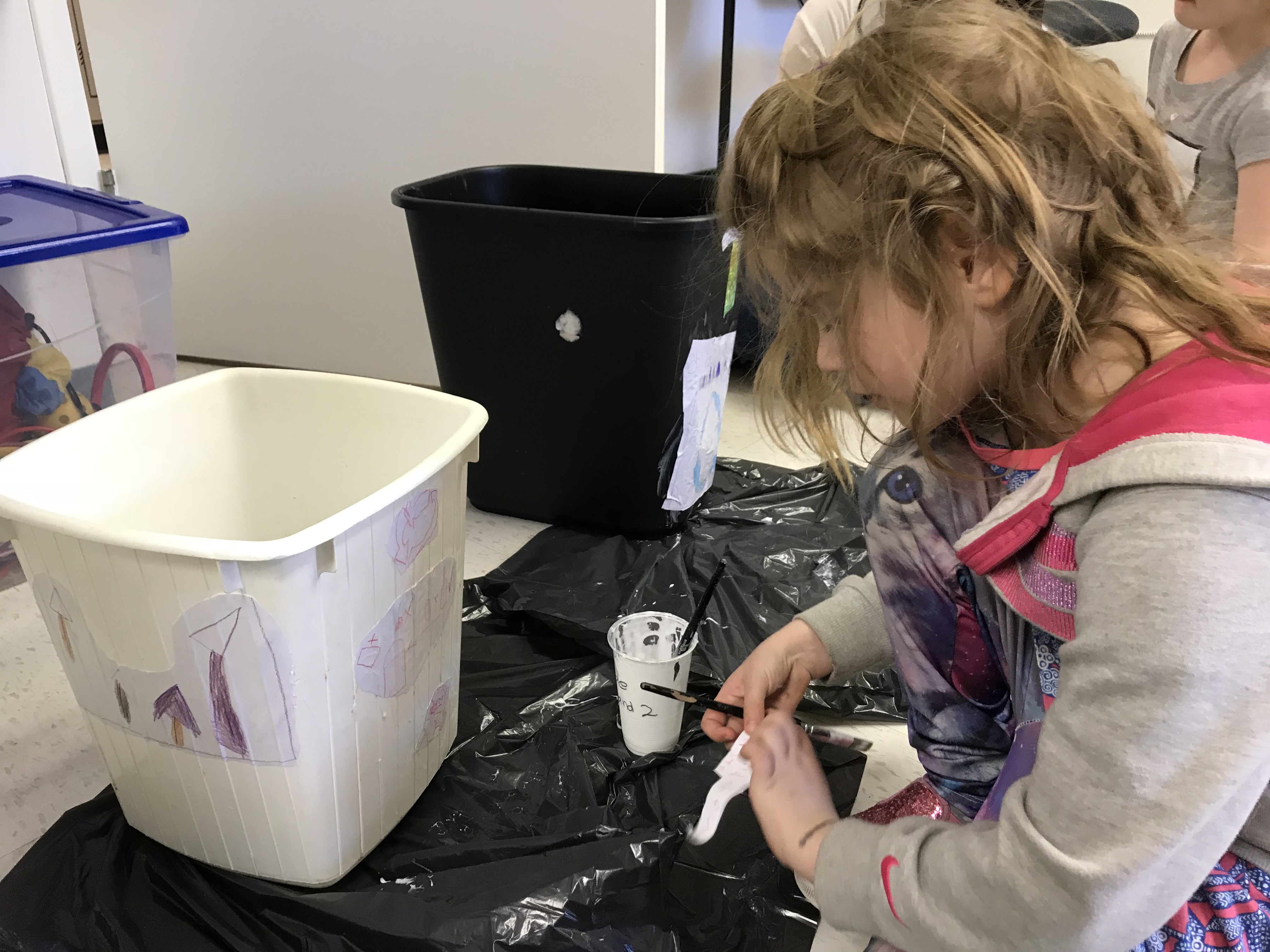 M: “I was gluing my picture on the garbage bin and there were a lot of pictures. We had to put a glue layer on top to make it actually stick. The glue dried after so our pictures could stay on forever.” 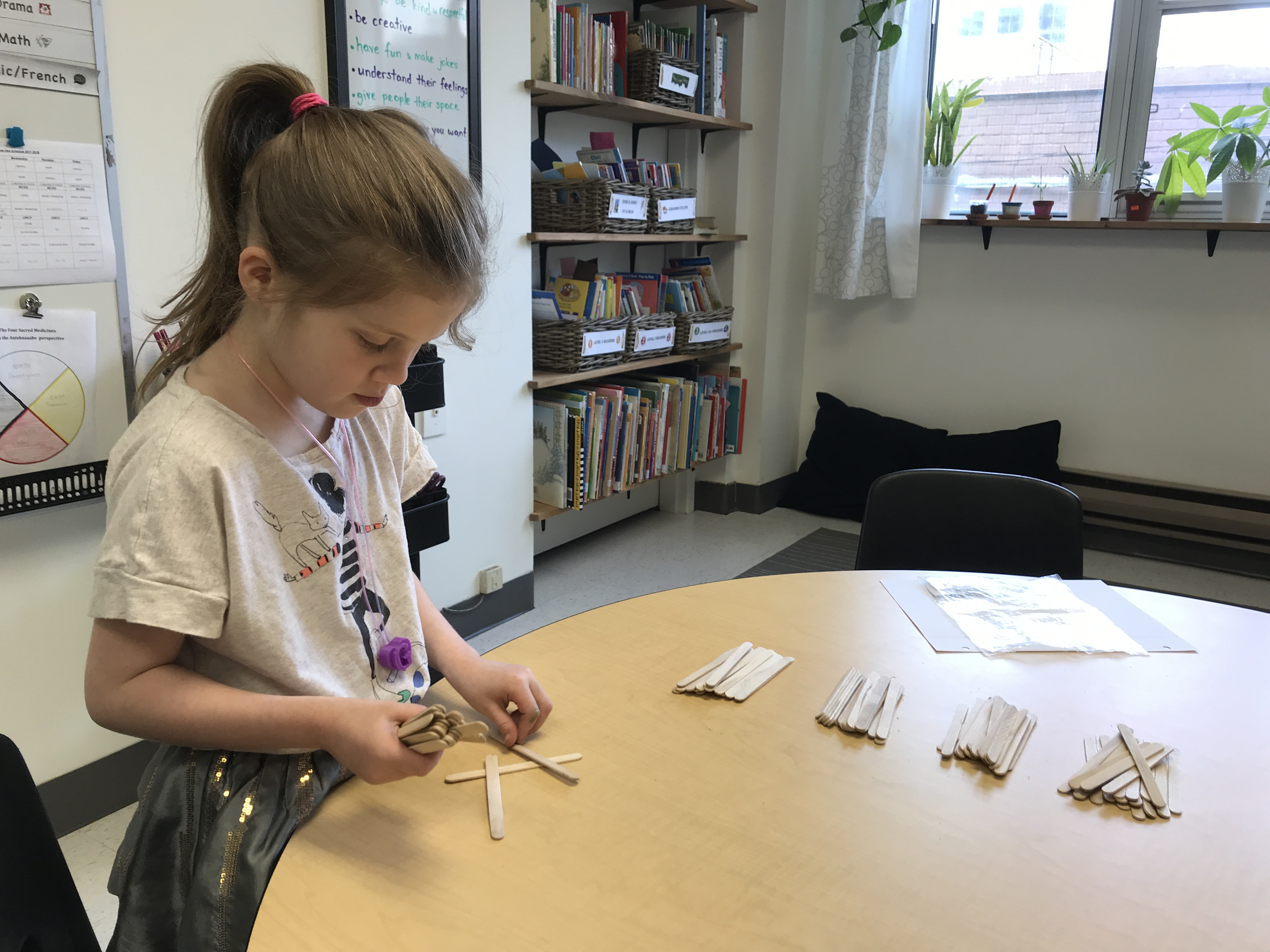 G: “Today, Soteira and I were counting how many sticks we had collected by reading for the MS Read-a-thon. We put them in piles of 20 and then counted by 100s. We found out that we read more than 1,000 minutes this month.” 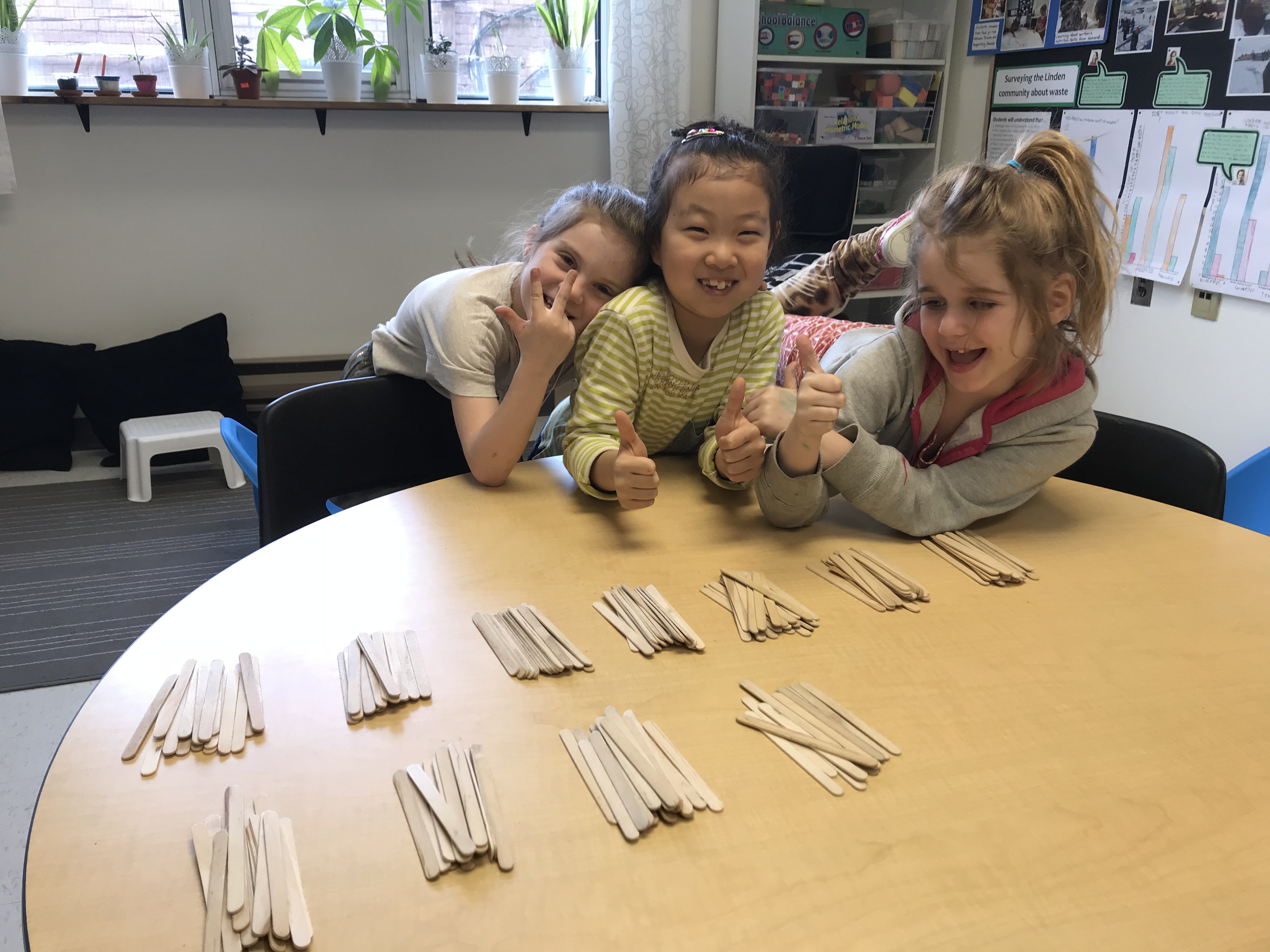 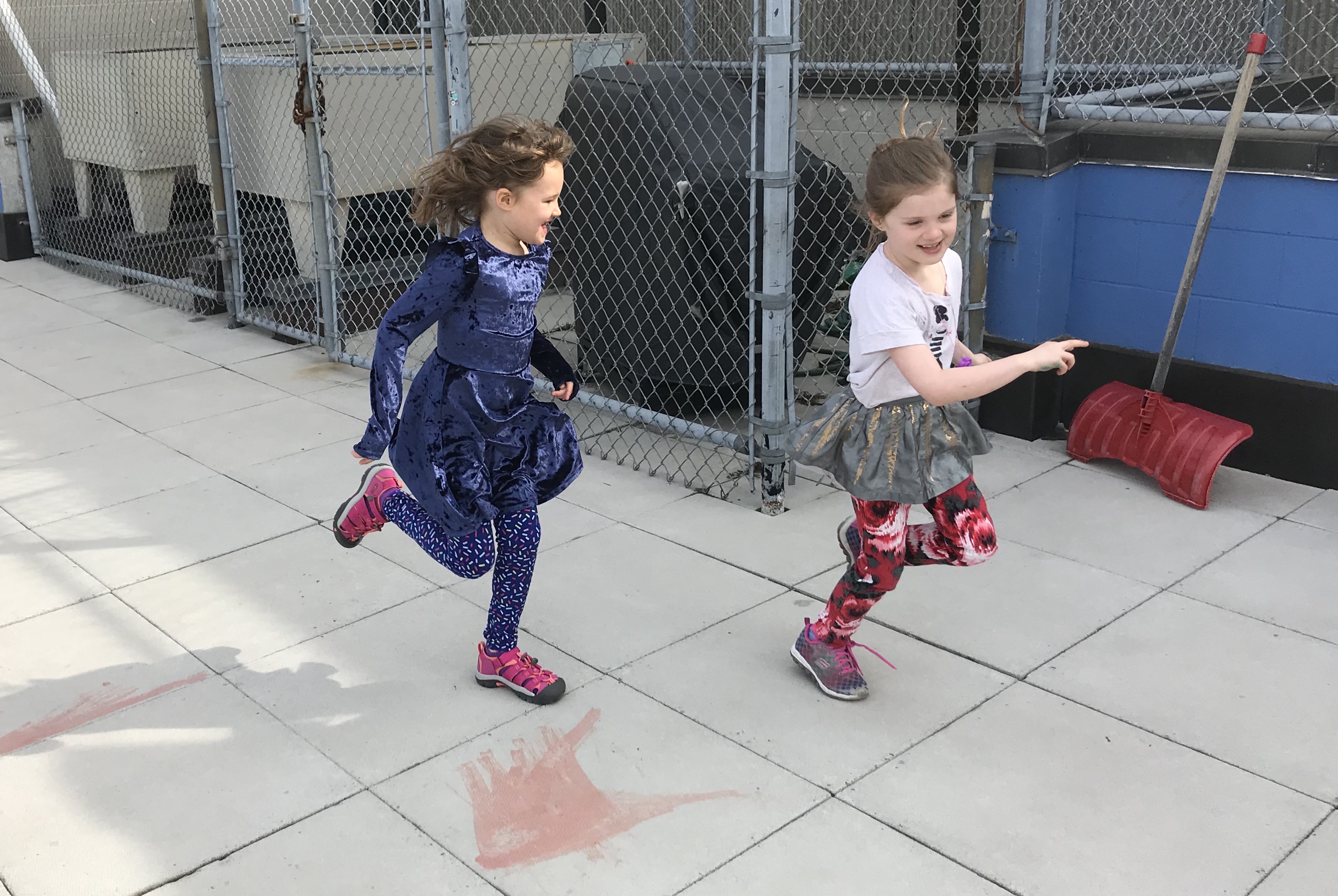 G: “Me and K were playing tag today on the roof. K was it and she tagged me and then back and forth. Tag is really good for your body to help you get some air and get your body warmed up. Your heart bumps faster too. K is super fast.” 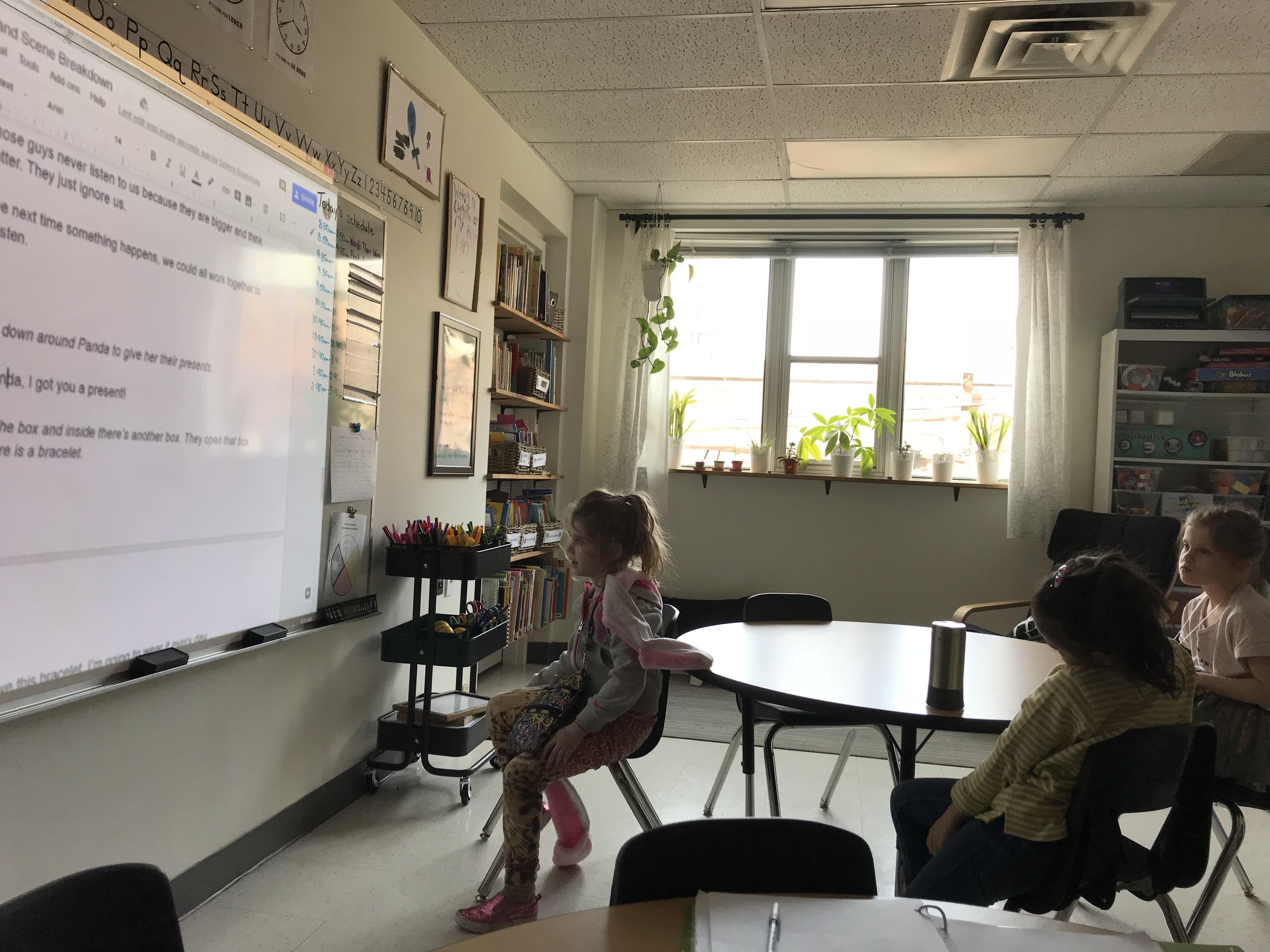 M: “This morning, we were working on the play script. It was very fun. We all got a turn to make lines and after that, we read the lines. I think the play is the best play ever so far because it’s a little bit happy, a little bit sad, a little bit exciting … it’s a lot of different feelings.” 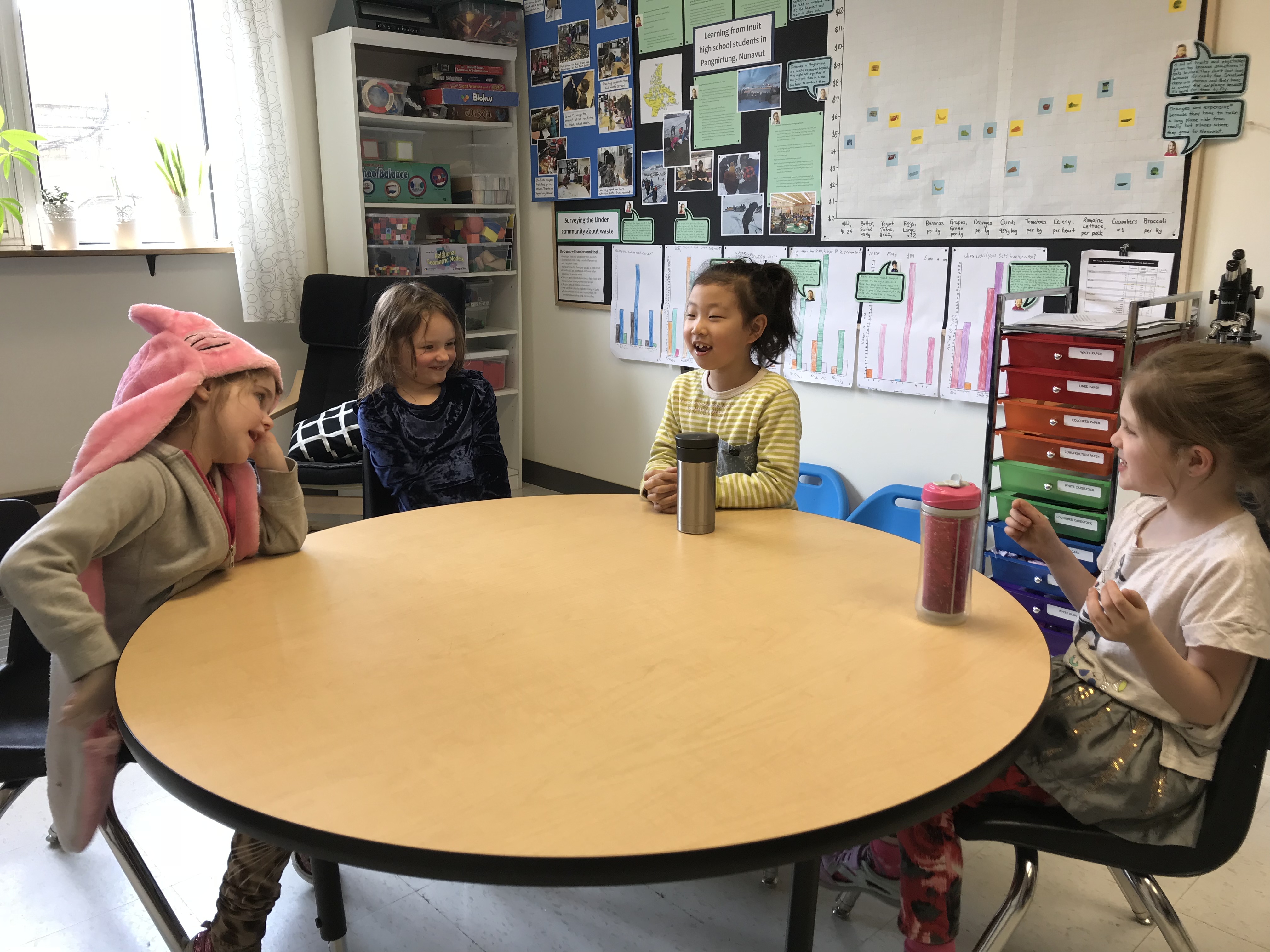 K: “The whole group was singing Happy Birthday to me because I was having an early birthday with the school. Tomorrow is my real birthday. My moms made rice crispy squares with Smarties and people thought they were so good.”