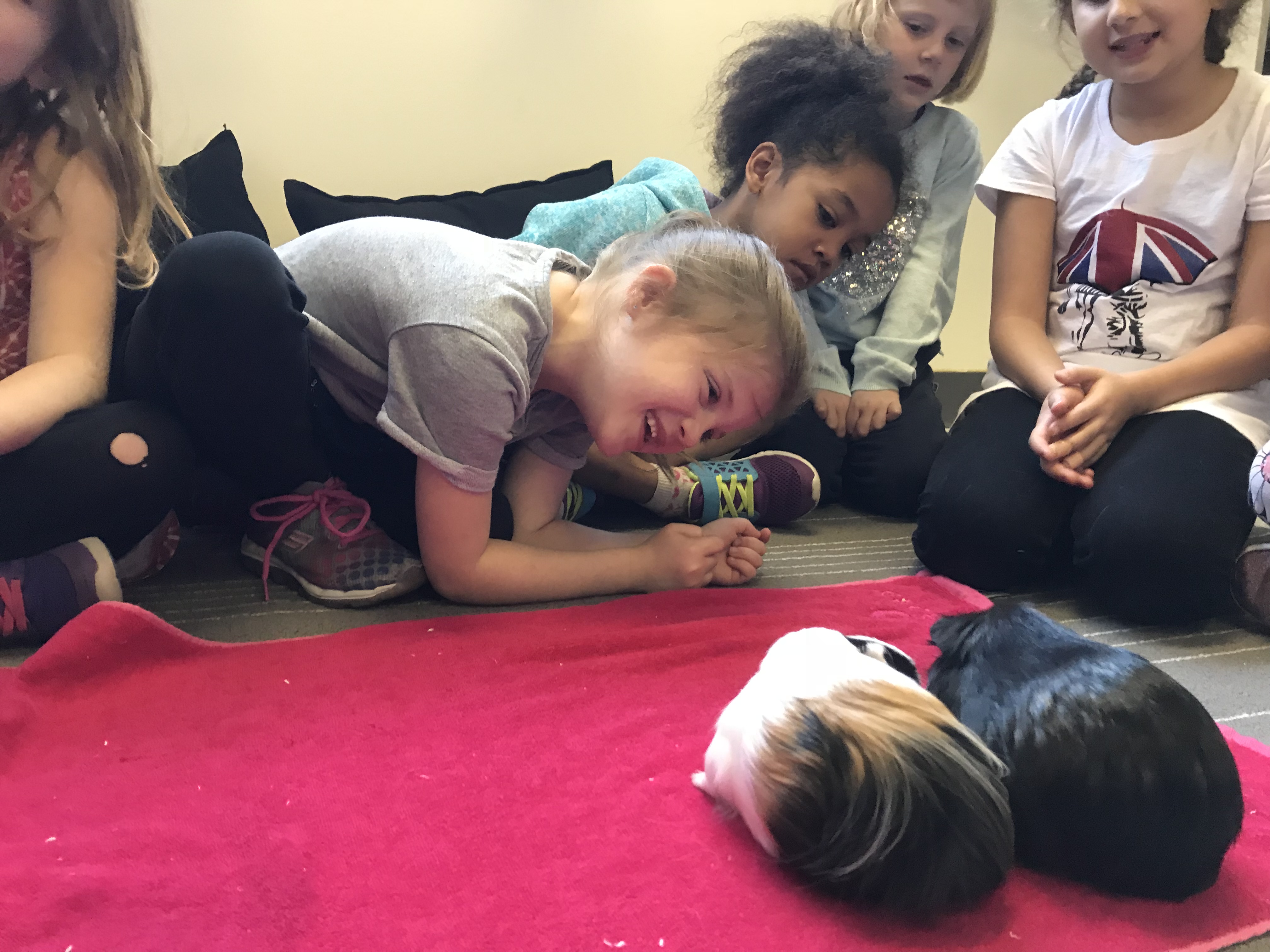 The Grade 1-2s drew lots of inspiration from their colourful fall environment this week. We used colourful leaves collected on Tuesday to create a beautiful spectrum of colour which will be printed and hang in our classroom. We also continued our study of symmetry by finding symmetry in leaves and by continuing to refine our use of miras. Students in Cooking Club made buttermilk biscuits and members of the Mythical Creatures Club had the chance to paint their faces in the style of a mythical creature. In the CERES lab, Grade 1-2s learned about tension and elasticity while making their own hand drums and then performed in a percussion parade around the school. We had some special furry visitors in our class on Thursday morning and learned how to be sensitive to the needs of smaller living things. Grade 1-2s participated in a grade 11 biology project on bacteria and conducted their own investigation into oxidizing using apples. They continued to develop their ability to write complete hypotheses and practiced recording qualitative observations in a chart. We saw improvements in spelling across the board as students worked with their individualized Words Their Way spelling list and we wrapped up the week by sketching trees in the park. This beautiful weather sure makes outdoor learning a breeze! 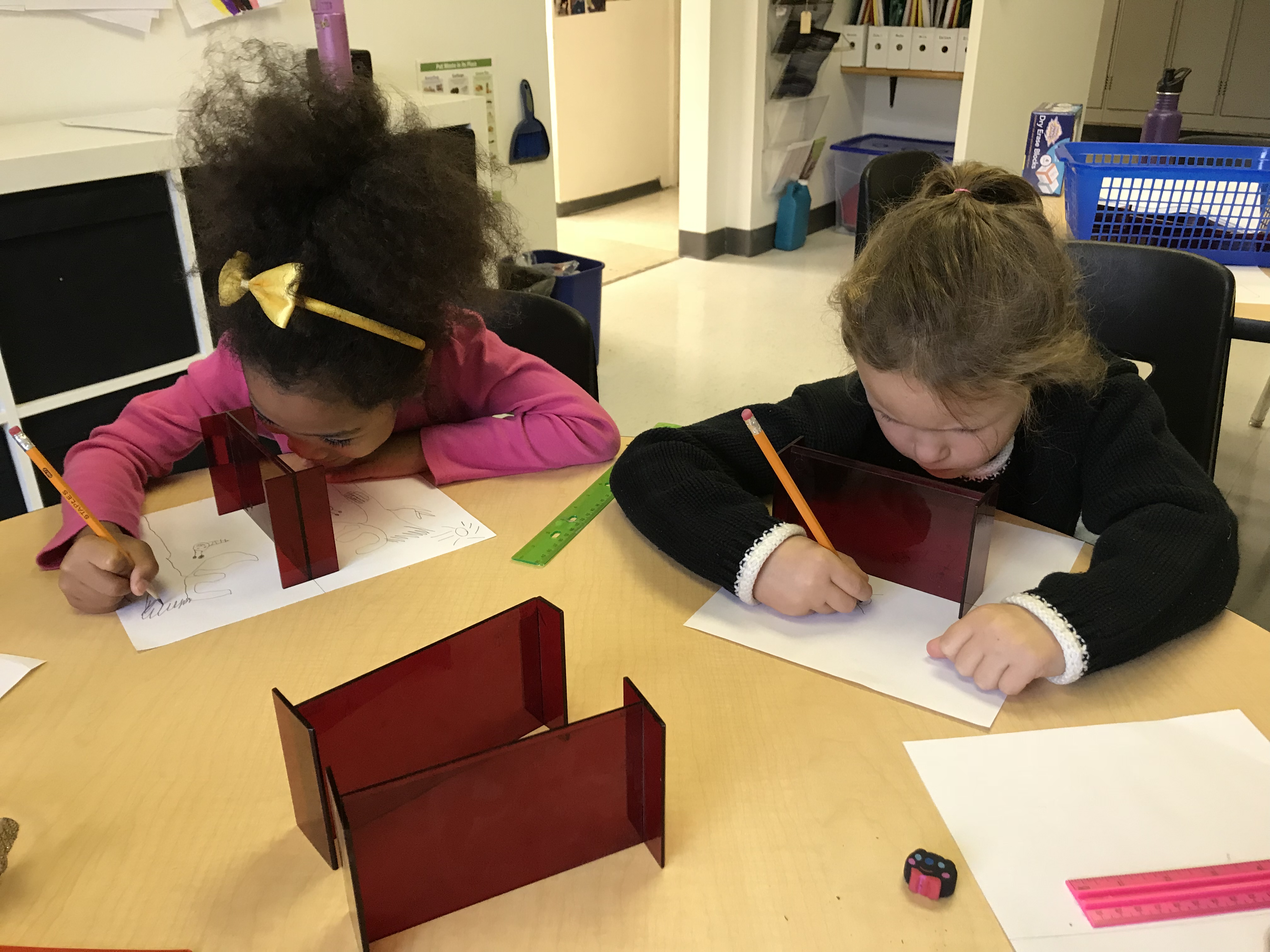 Z and K take great care to keep their miras in the right place as they practice drawing with symmetry. 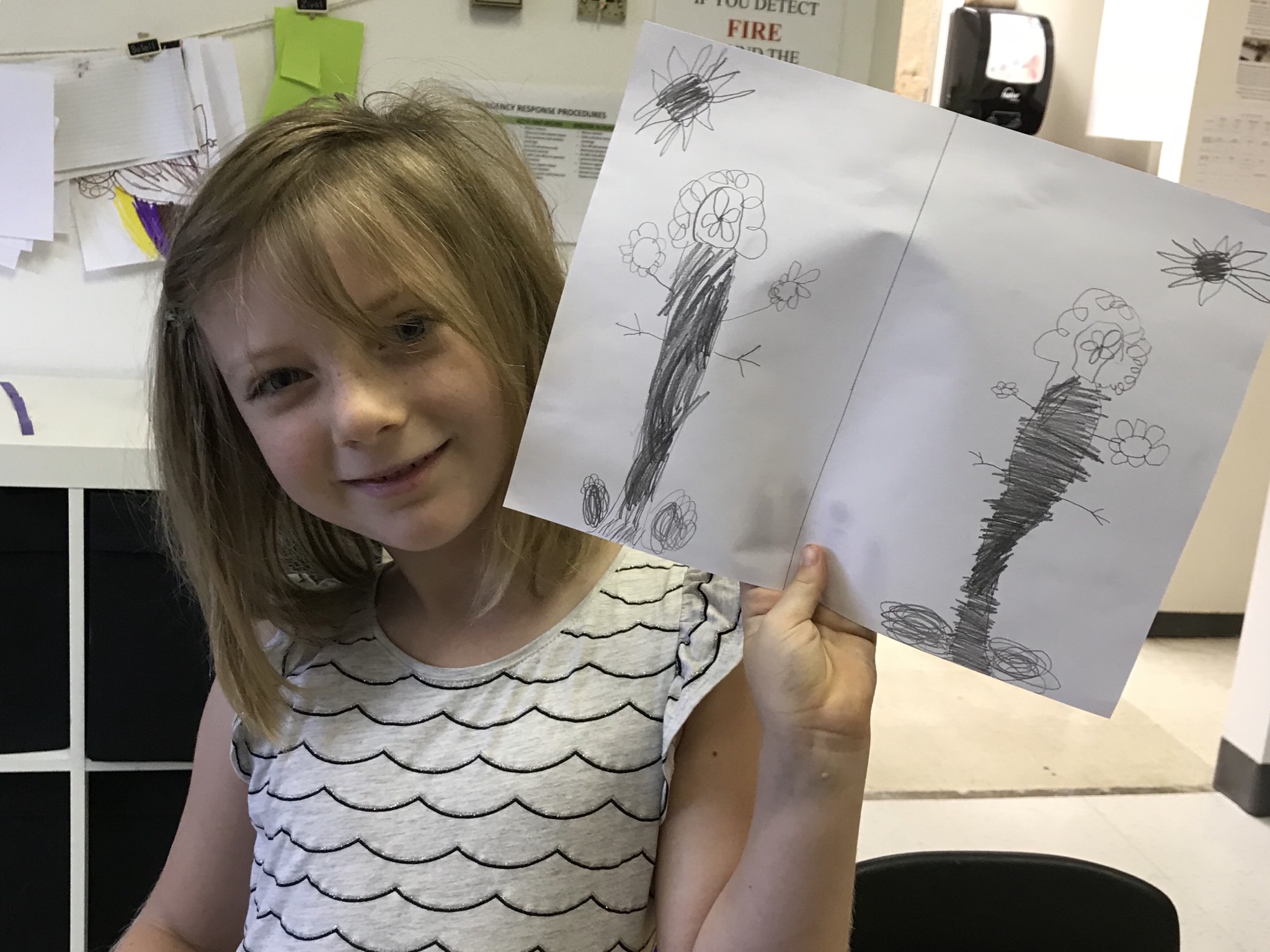 After a more challenging attempt last week, S is happy to have been so successful in creating a symmetrical drawing using a mira. She attributes her success to staying away from the edges in her original picture, holding the mira steady, and taking her time. 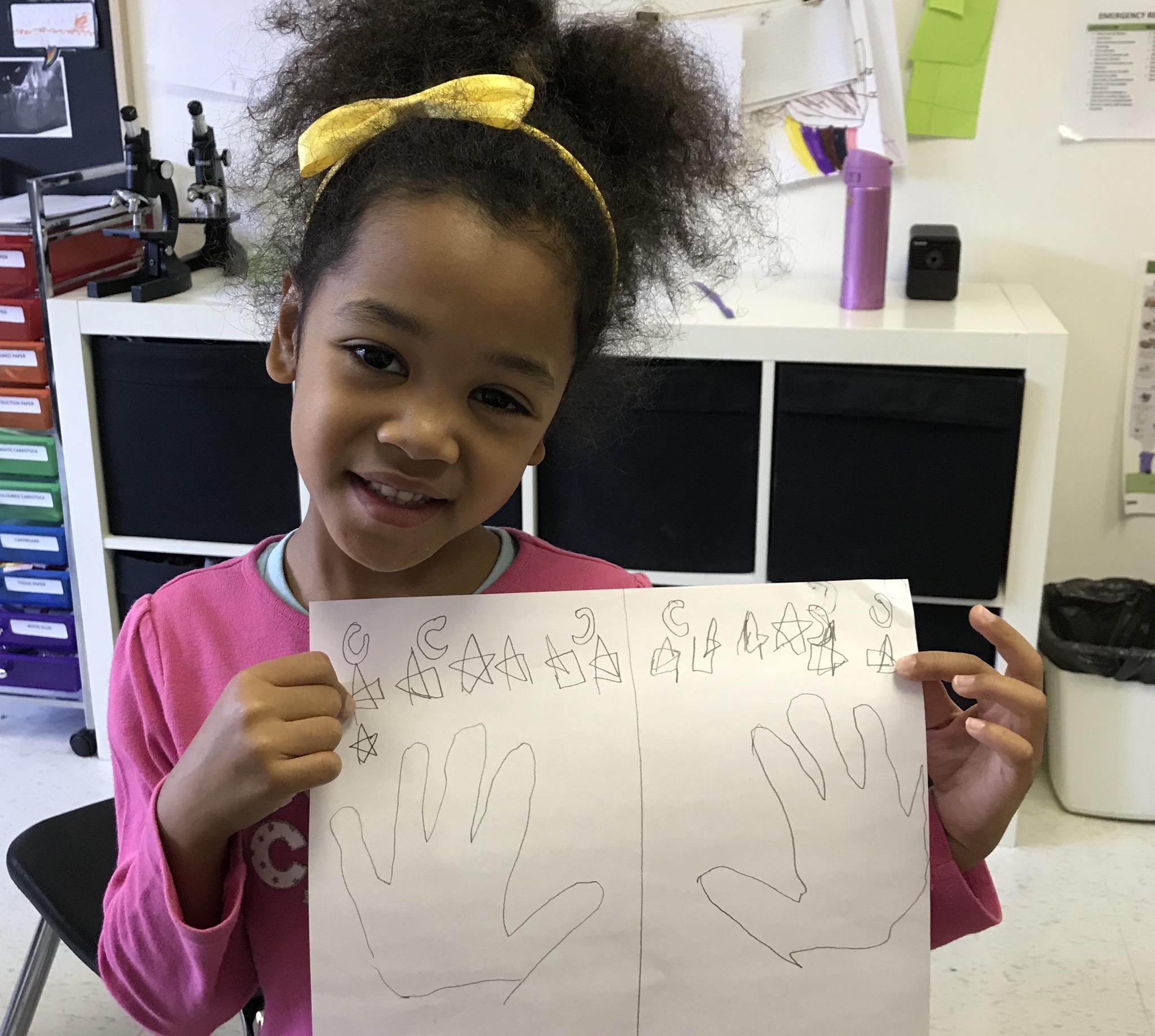 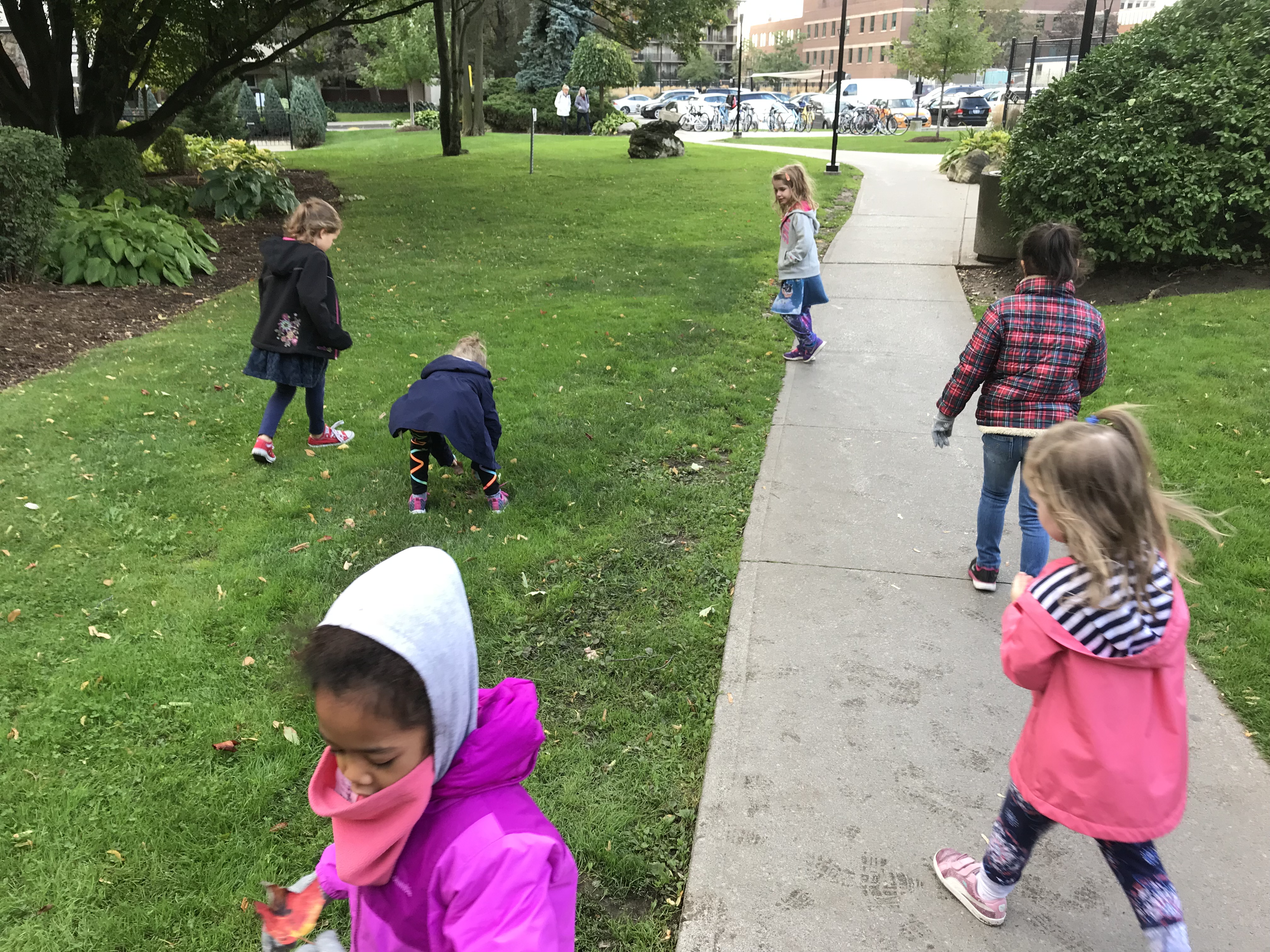 Grade 1-2s and Early Learners work together to collect leaves of all shapes, sizes, and colours for a number of projects including our leaf spectrum and symmetry drawings. 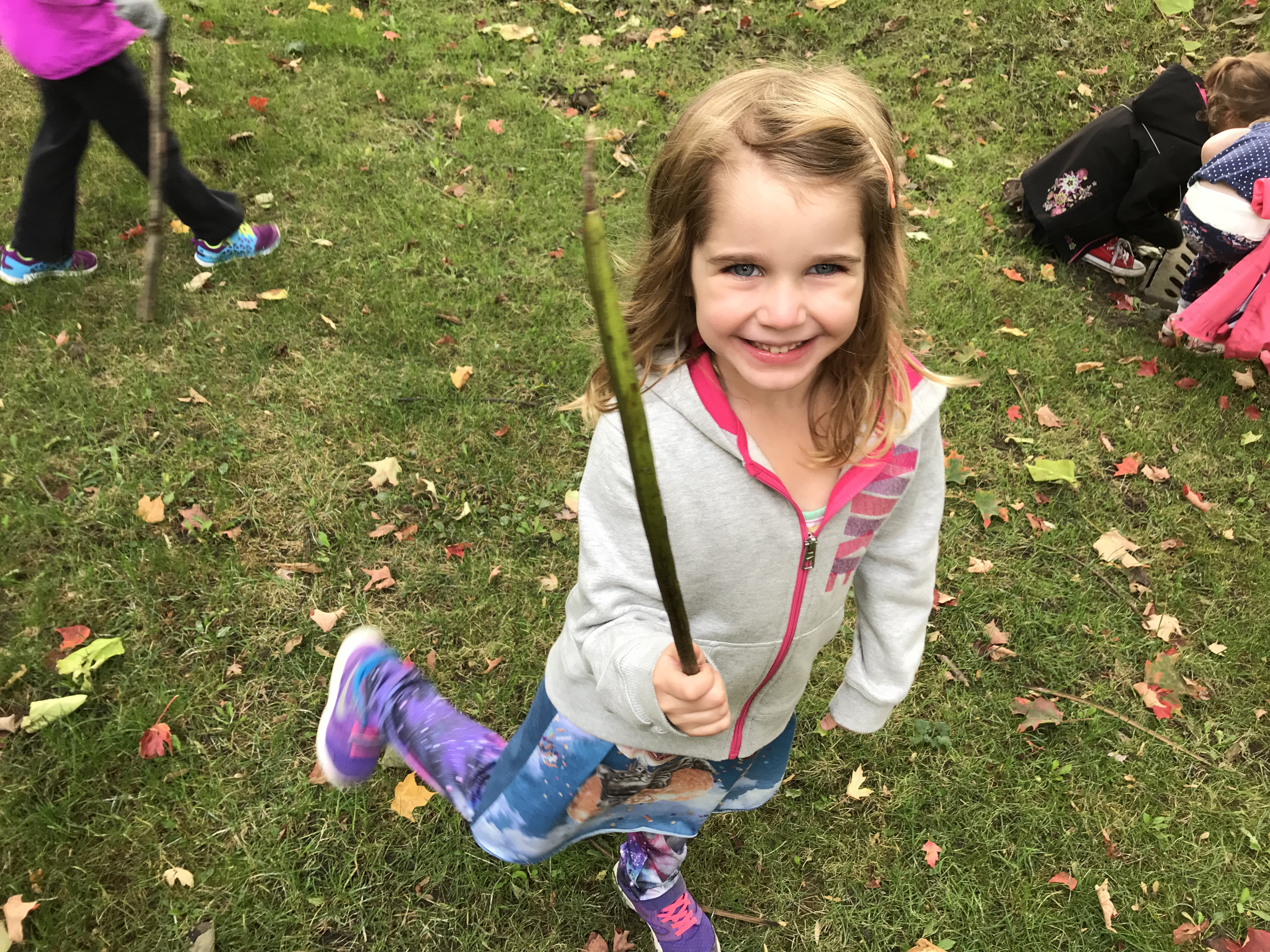 During our hunt for fall leaves, M is overjoyed to have discovered a "pod" and wants to bring it home for her mother as a birthday gift. She talks about all the ways that the pod could be used at her house and it a bit disappointed to hear that the beans inside may not be edible. 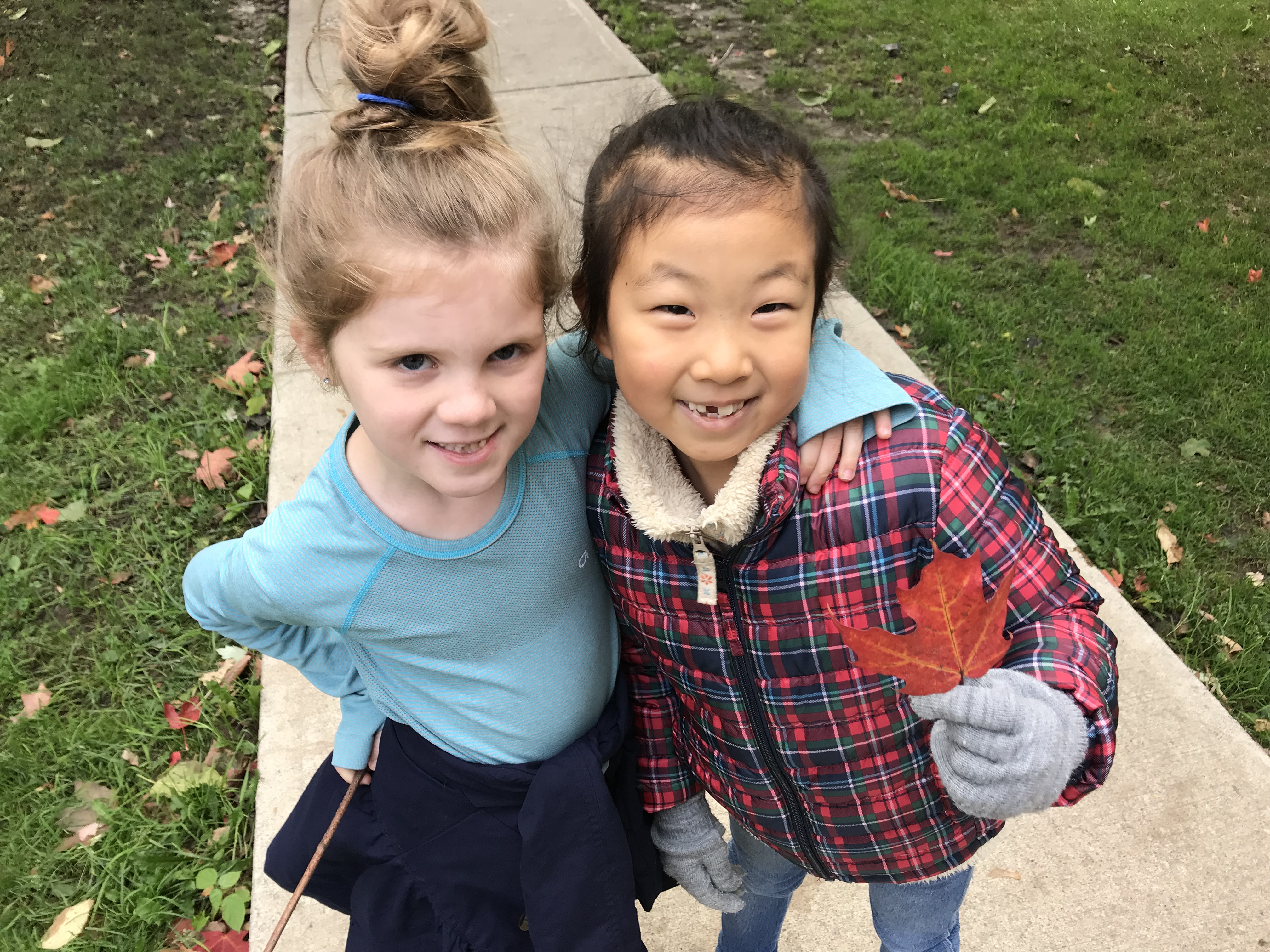 G and M work together to retrieve leaves for their various projects this week. 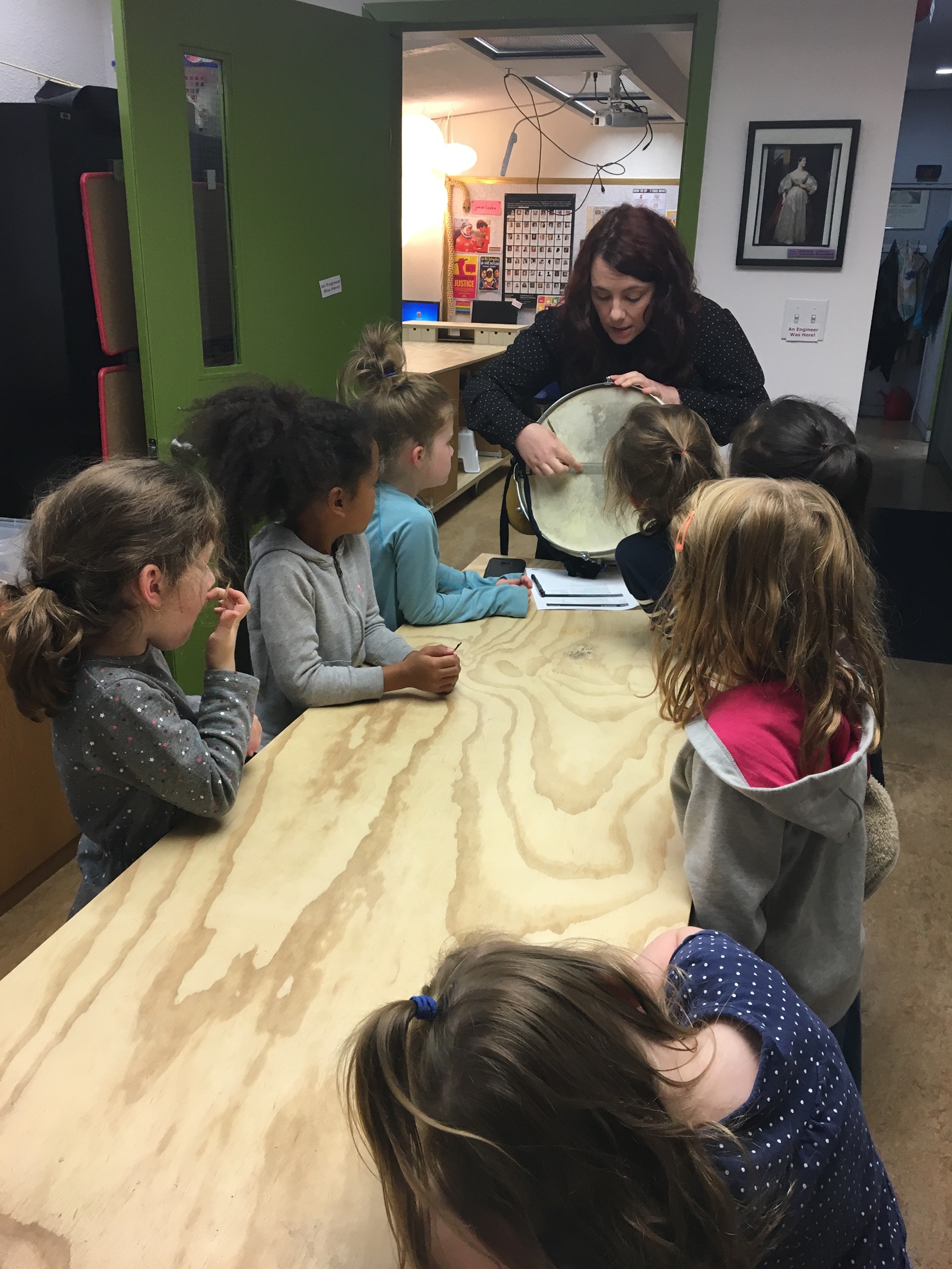 Beth demonstrates how sound is created on a snare drum during CERES class as the students learn about tension and elasticity. 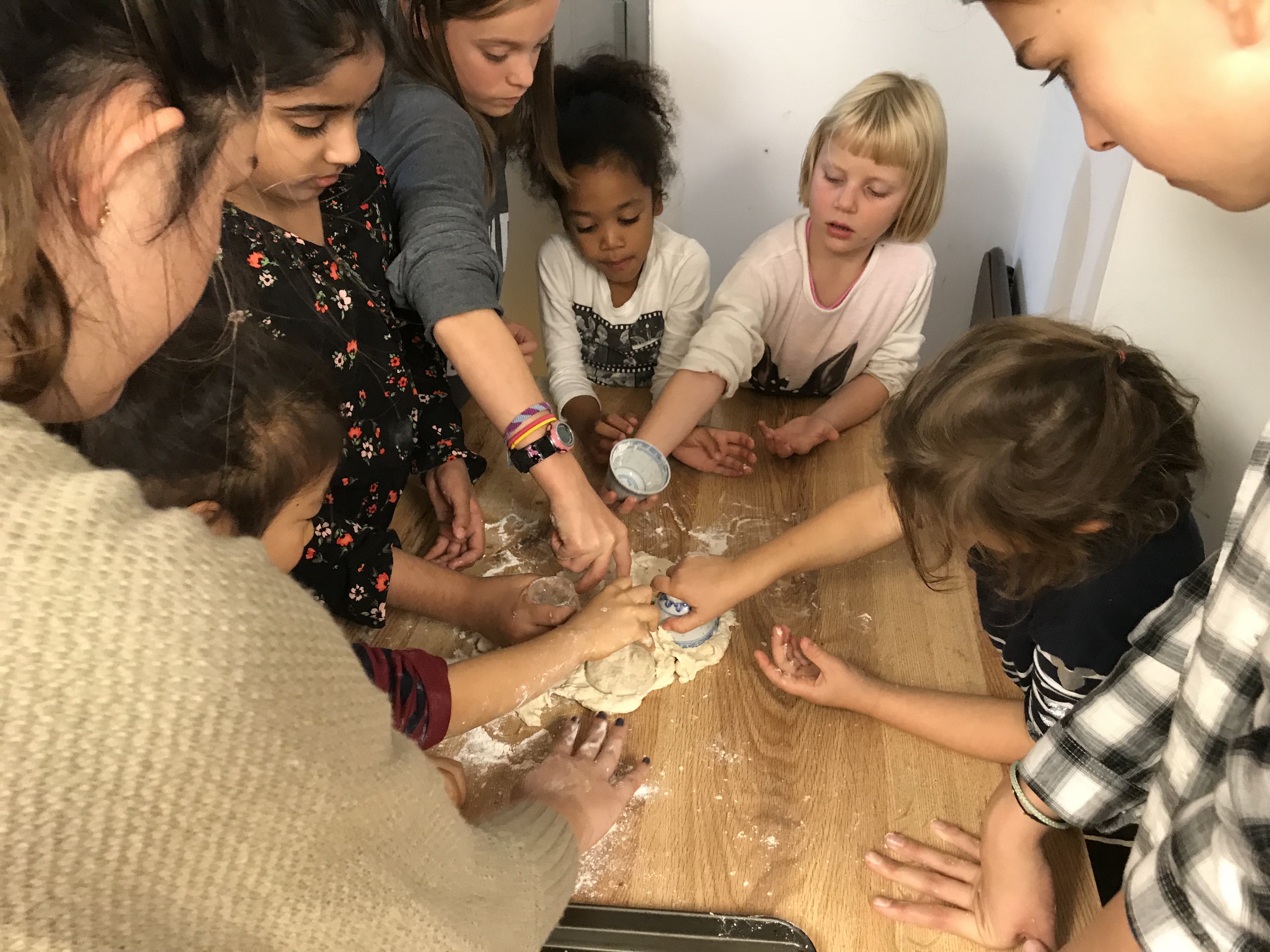 Z, M, and K are excited to be cutting out circles from the buttermilk biscuits dough to bake during cooking club this week. The biscuits were a big hit and the girls enjoyed coming up with ideas of things they could put on the biscuits (including apples). 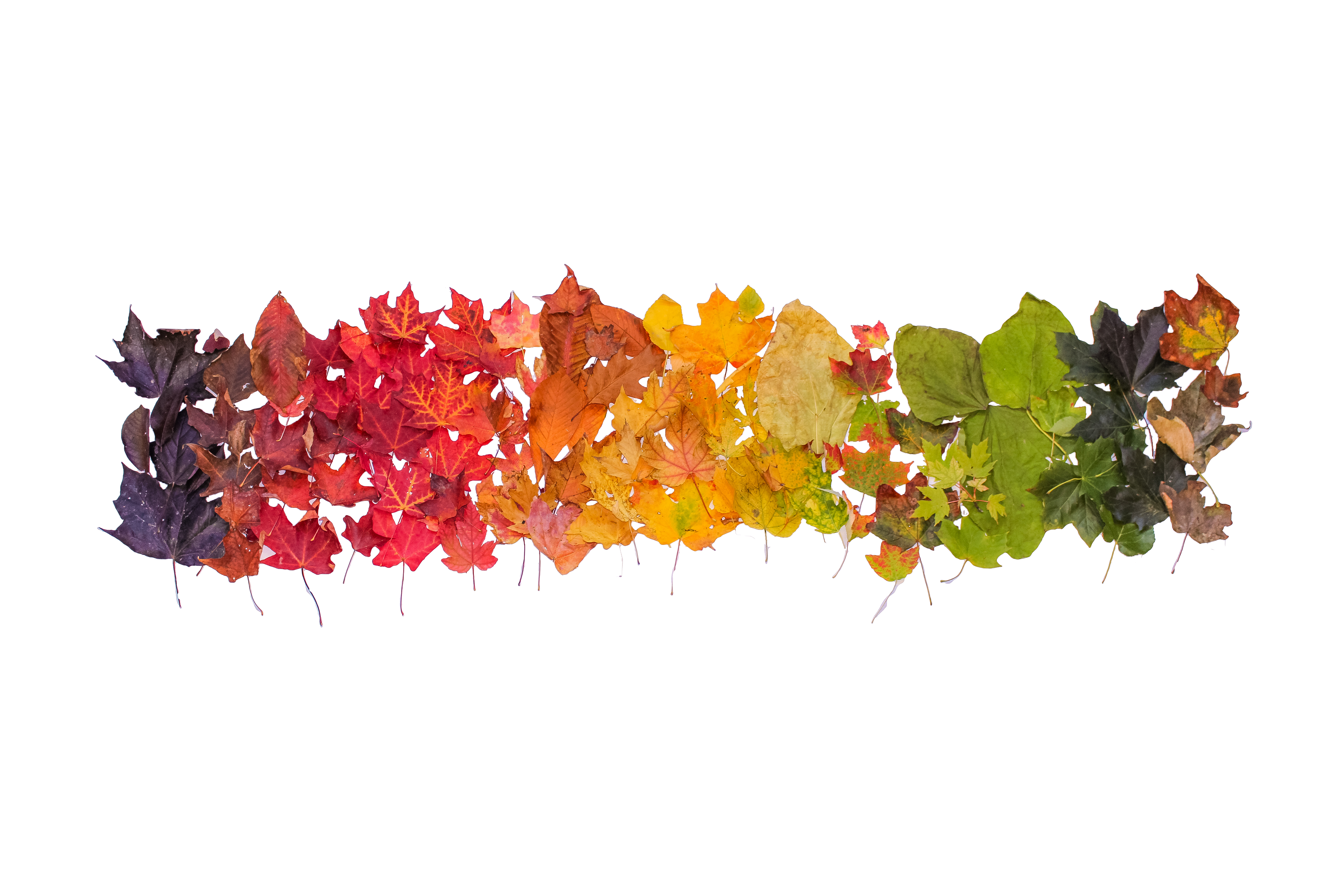 The Grade 1-2s sorted the leaves collected earlier in the day by colour to create this beautiful fall spectrum of colour (and a big thank you to Justin for the photofinishing). Afterward, K remarked that "We organized them on the table and it starts from the beginning all the way to the end of the rainbow and it looks really good." We are looking forward to framing this to display in our classroom! 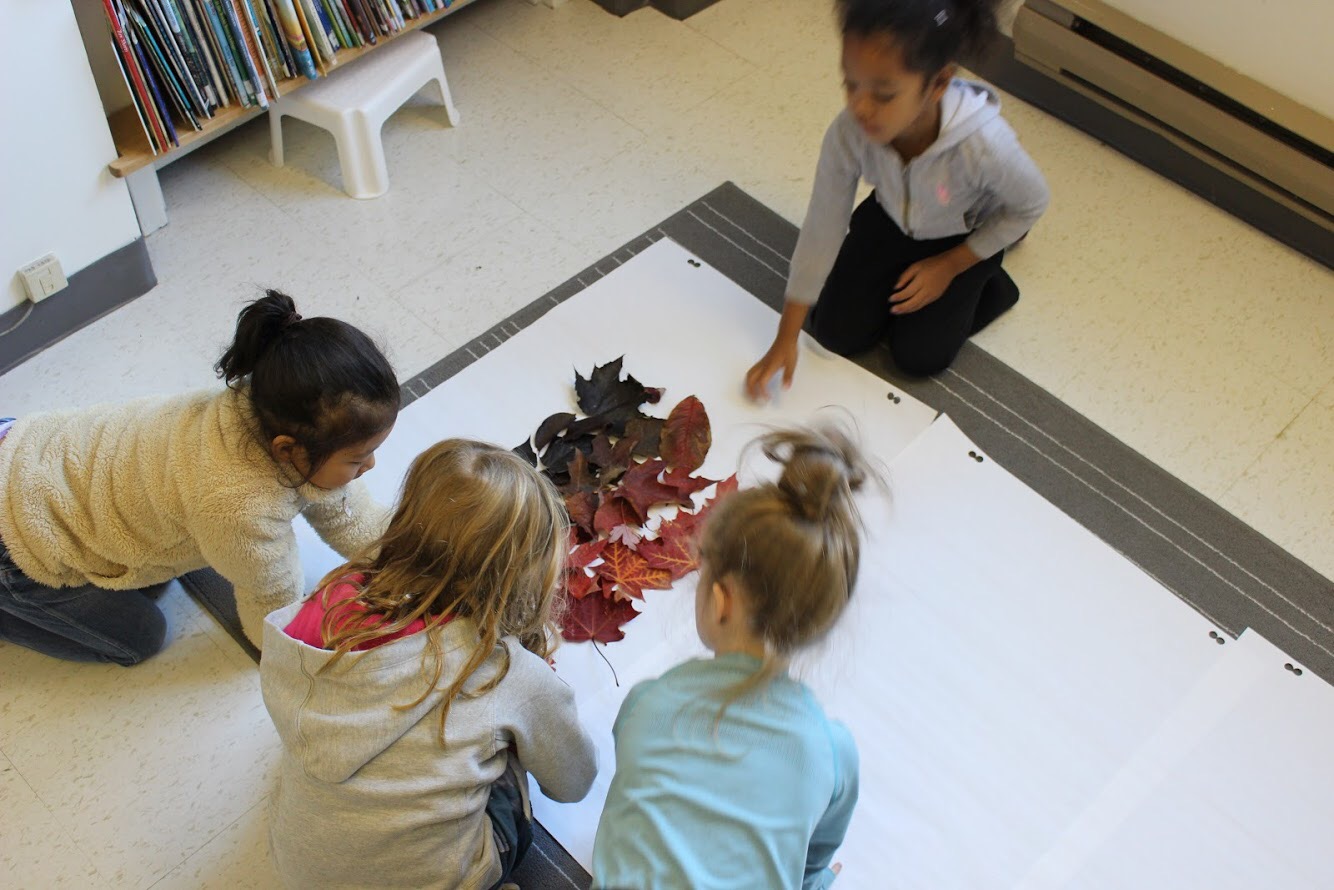 After sorting the leaves, M, M, and G work together to arrange the reds from darkest to lightest. When the Early Learners visited at the end of the project and asked who was responsible for each colour, M remarked "It's not who did it. If we were doing the red, we gave some to everyone and we collected together. We worked together as a team." 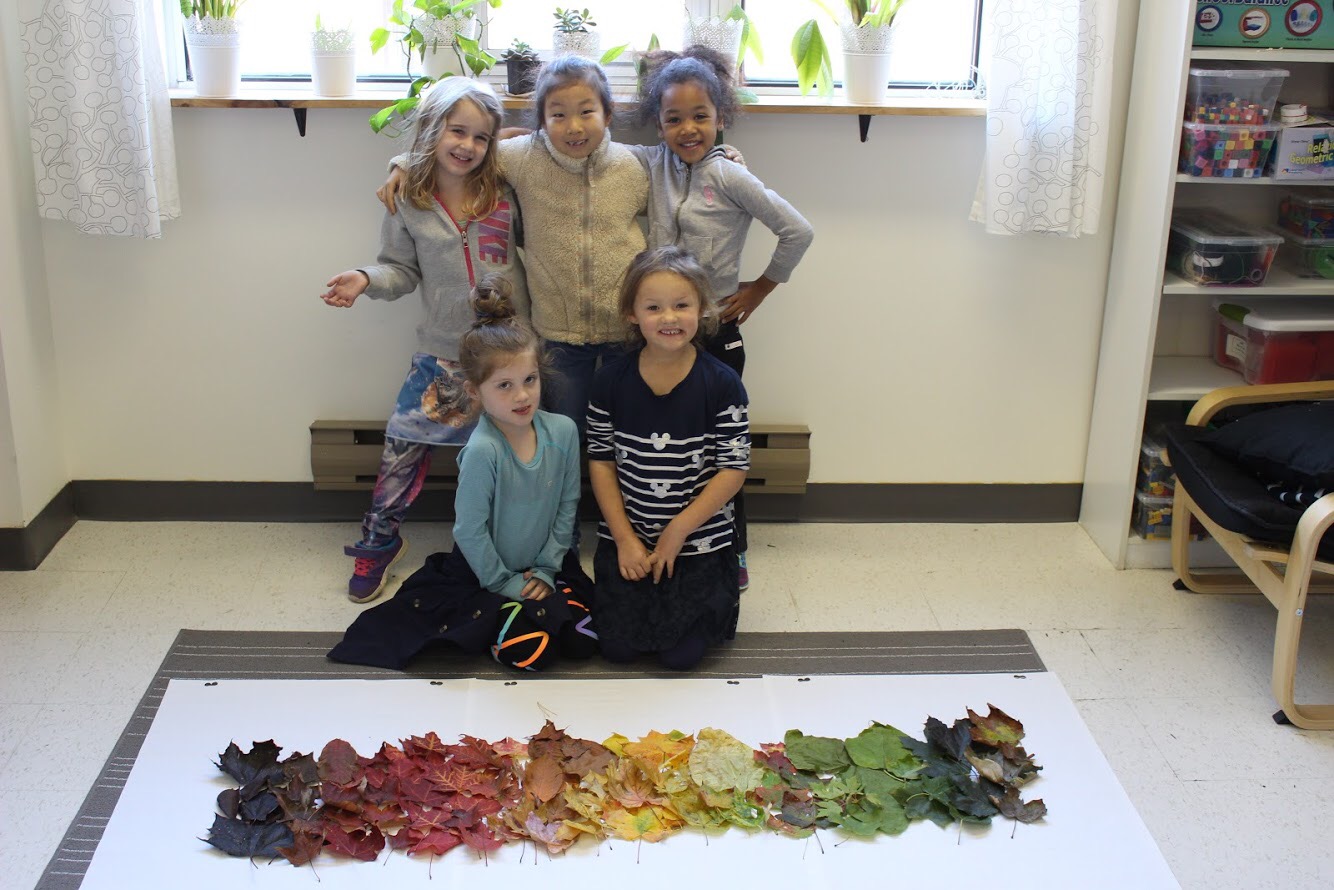 The Grade 1-2s pose with their final leaf spectrum. M commented that "We did kind of like a rainbow. It's not exactly like the one Soteira showed us. Everyone had to add their ideas and that was needed to make it." 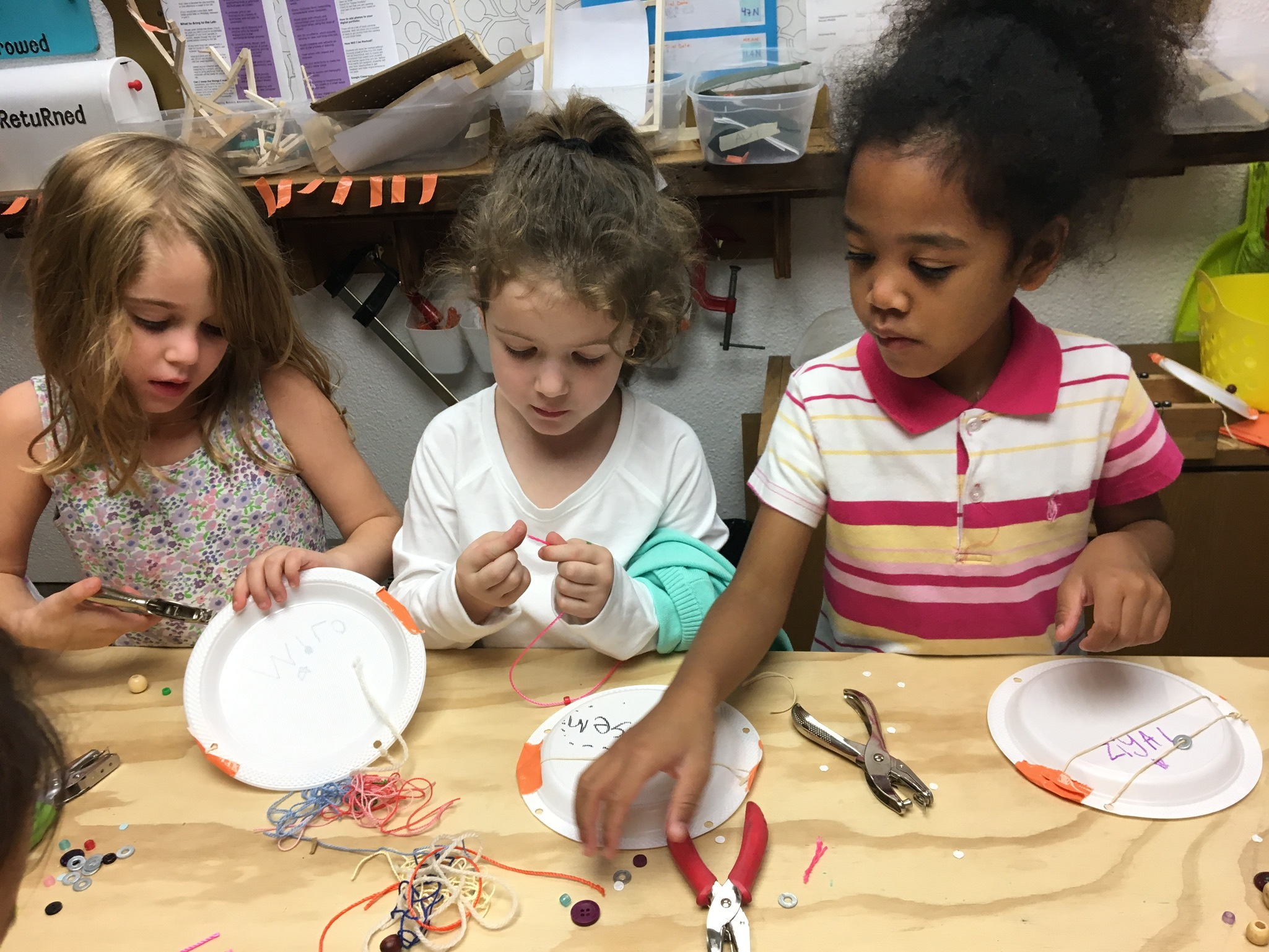 M and Z work with K in the CERES lab to build hand drums while learning about elasticity and tension. 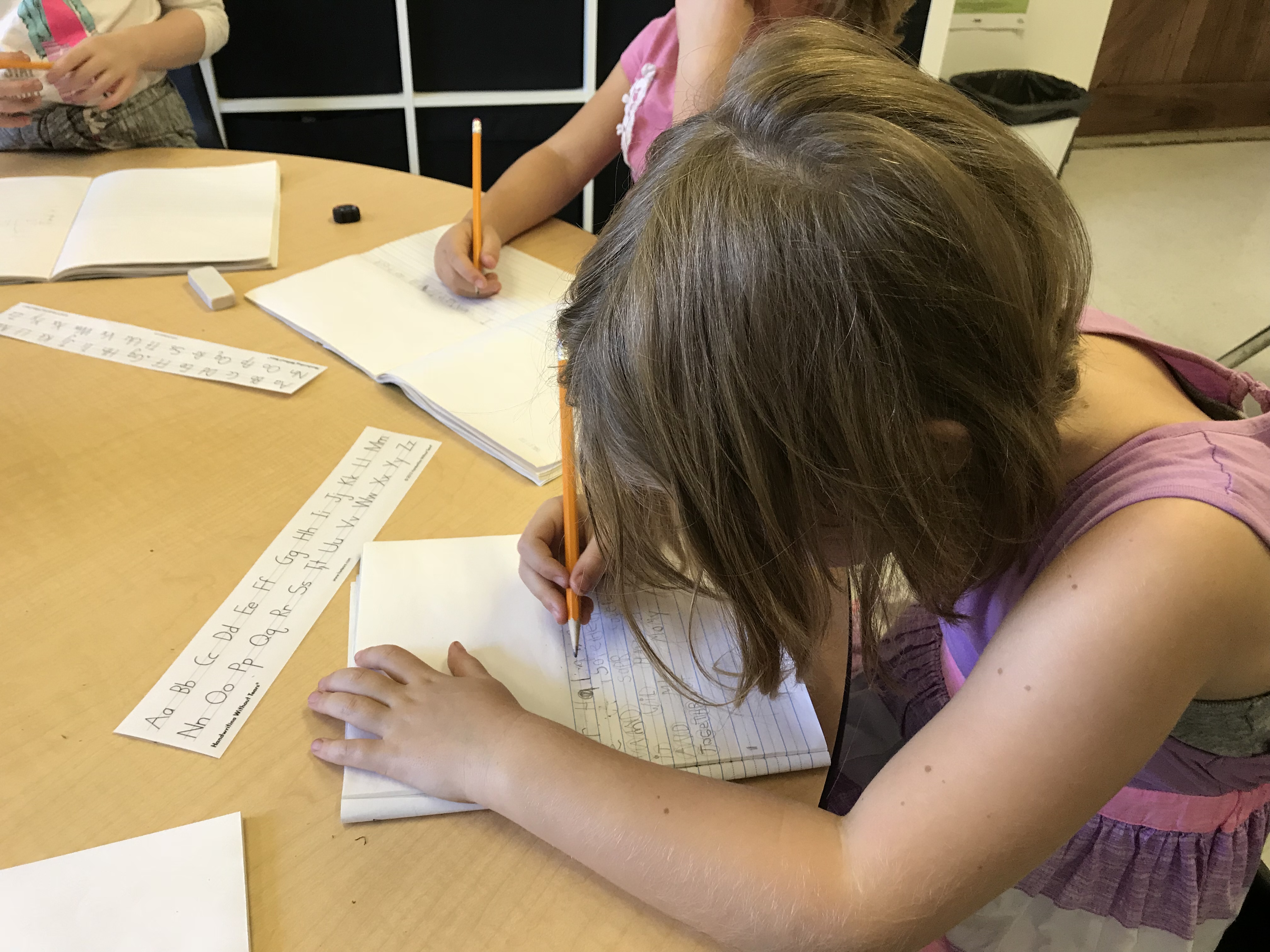 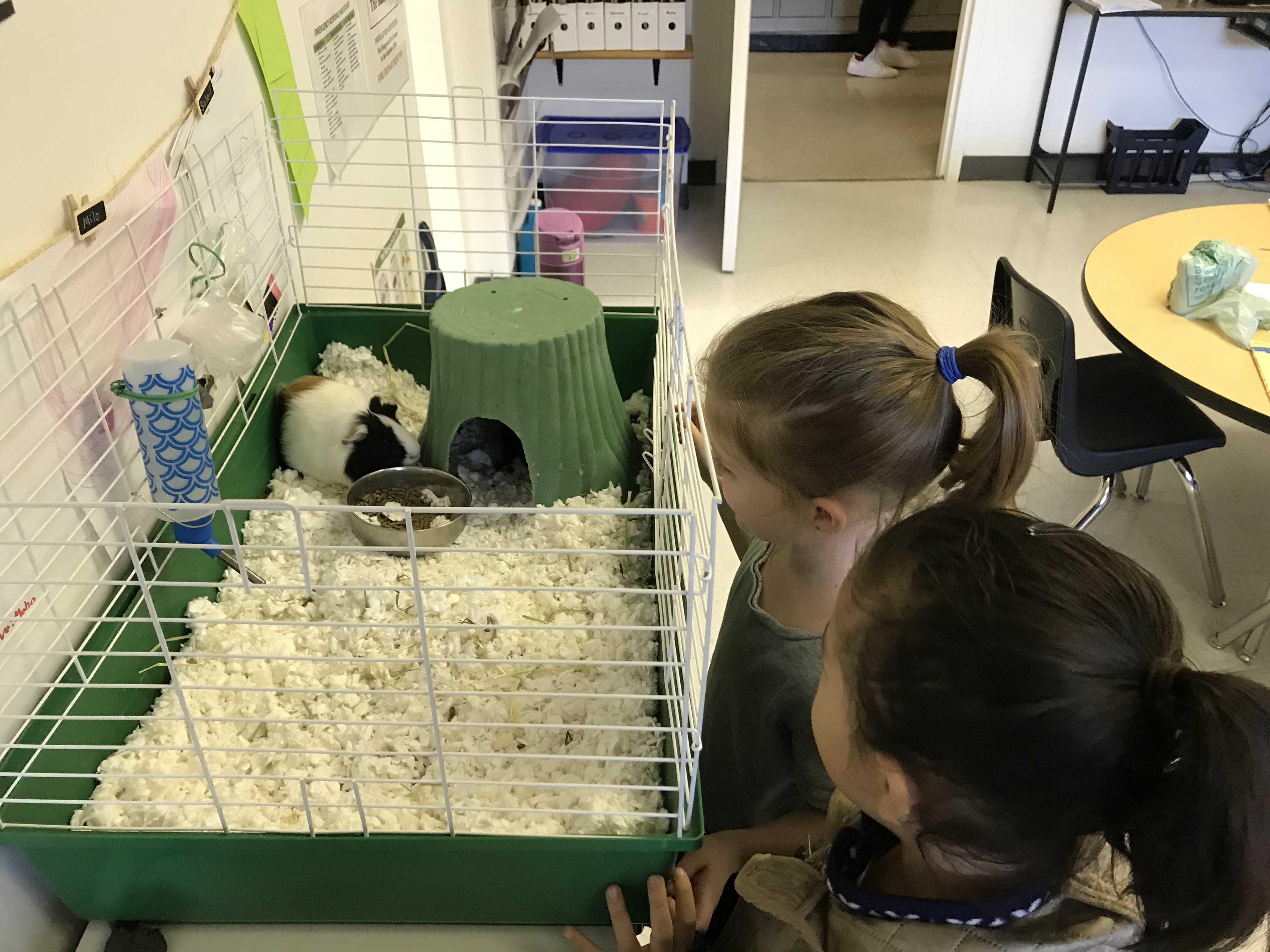 G and M are excited to greet two guinea pigs that joined our class on Thursday morning, courtesy of a Grade 6 student. They were proud to remember that guinea pigs need very quiet talking from their Humane Society visit last year. 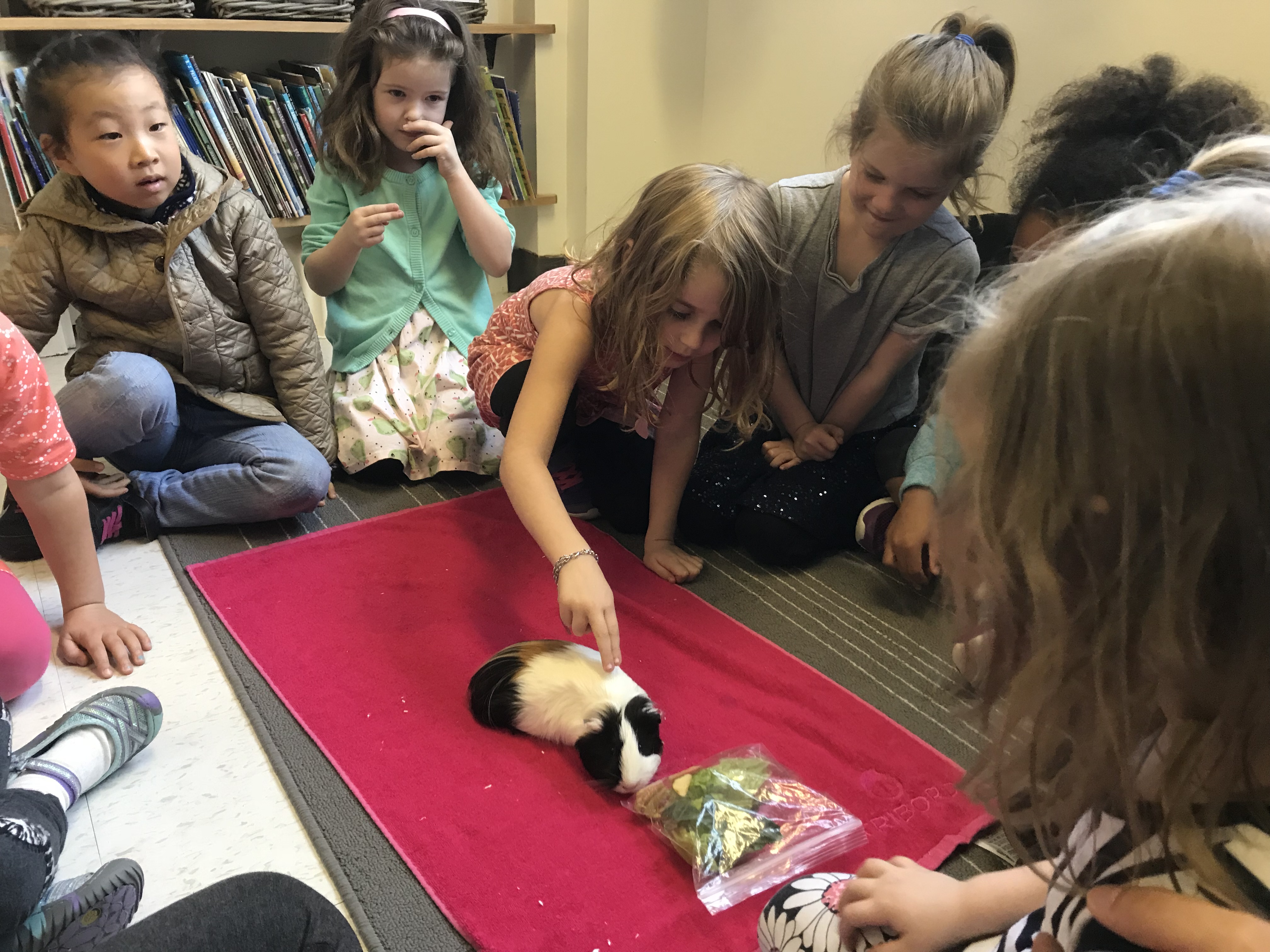 M takes care to pet "Patchy" gently with two fingers as K instructs and to follow the grain of her fur so it is comfortable for the critter. 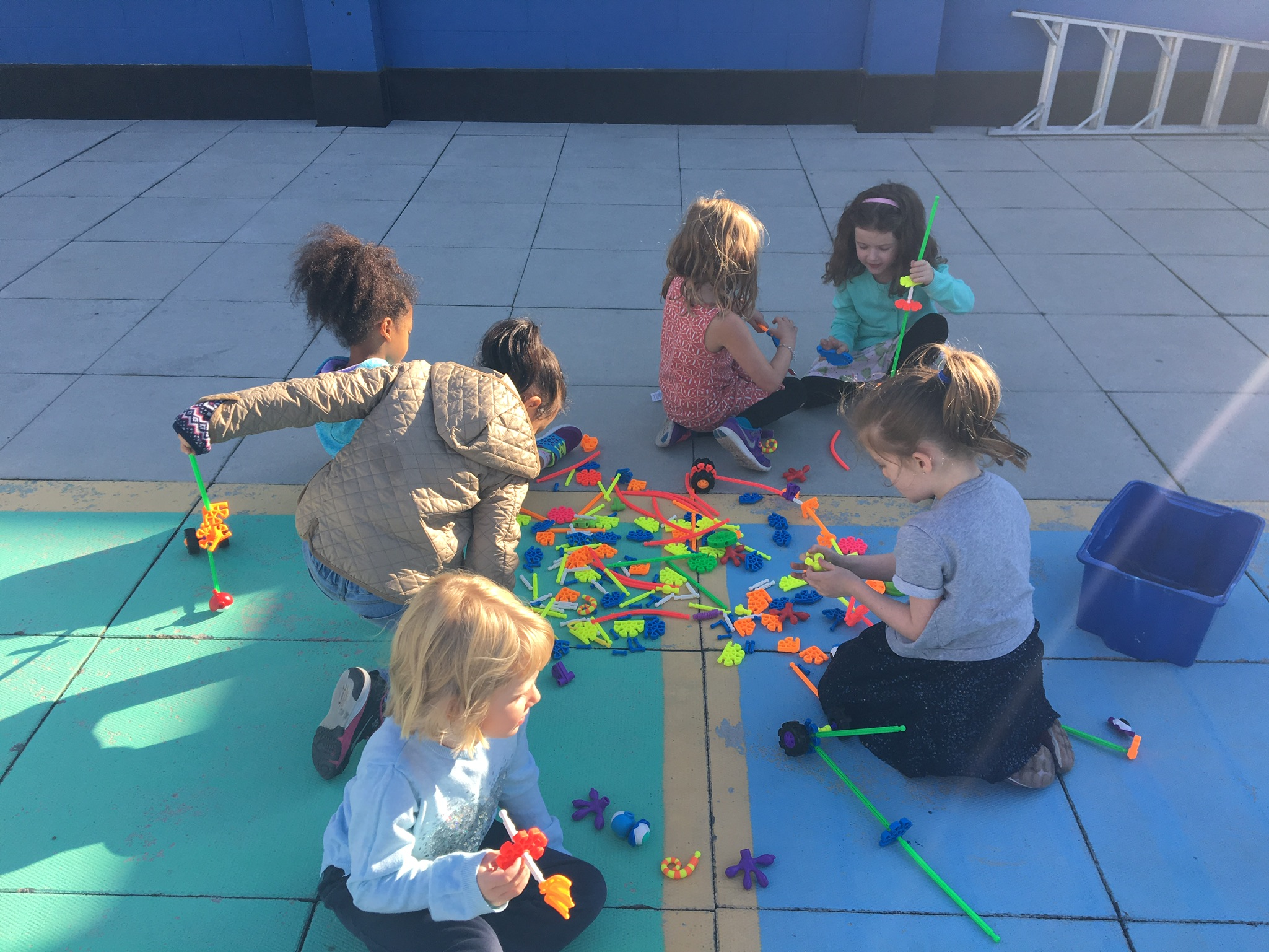 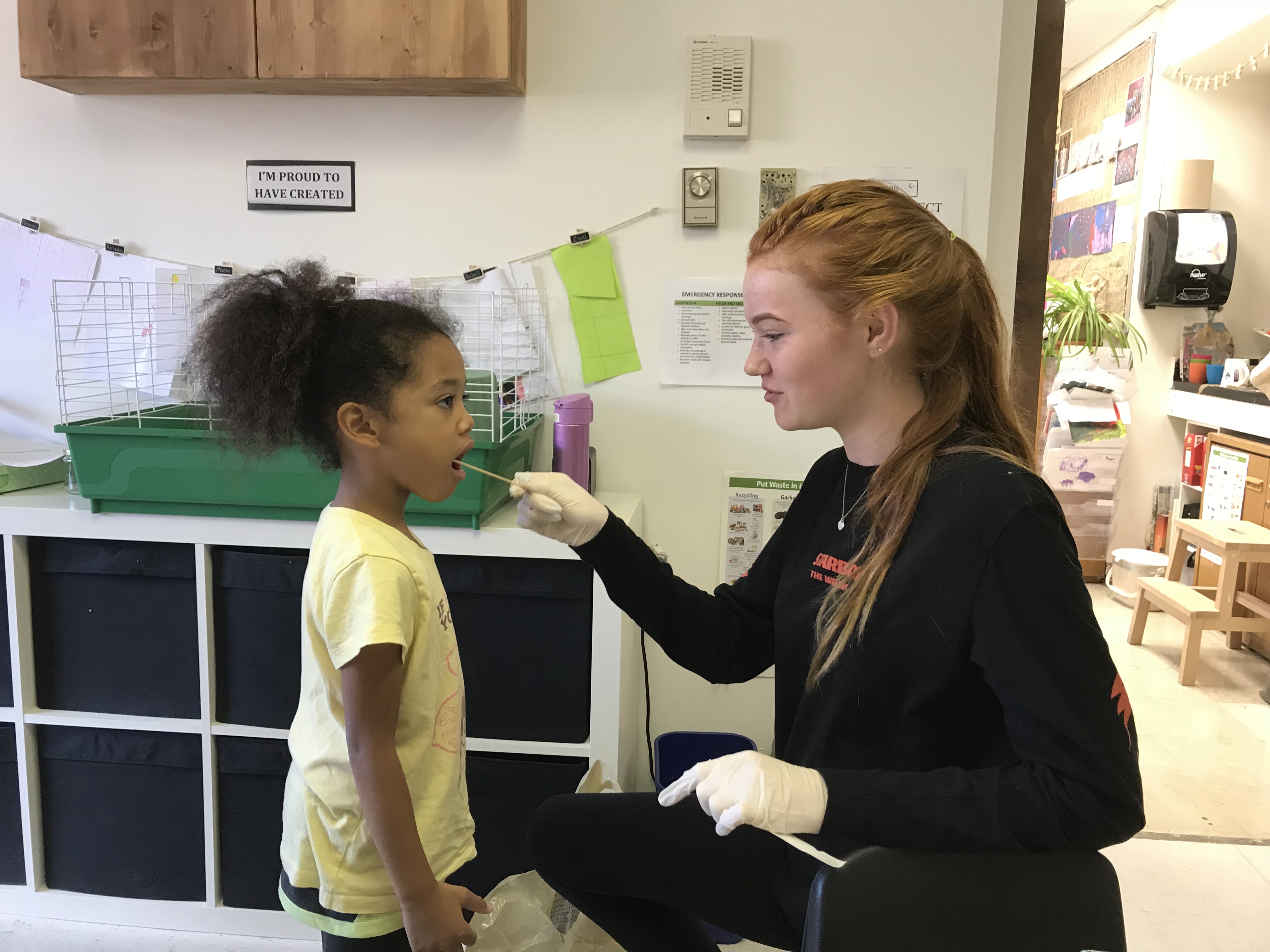 Z is excited at the prospect of helping a grade 11 student with her bacteria study for her biology class. R is testing which bacteria is most resistant to antibiotics and the Grade 1-2 class has been invited to the biology class to watch R conduct her observations over the coming weeks. 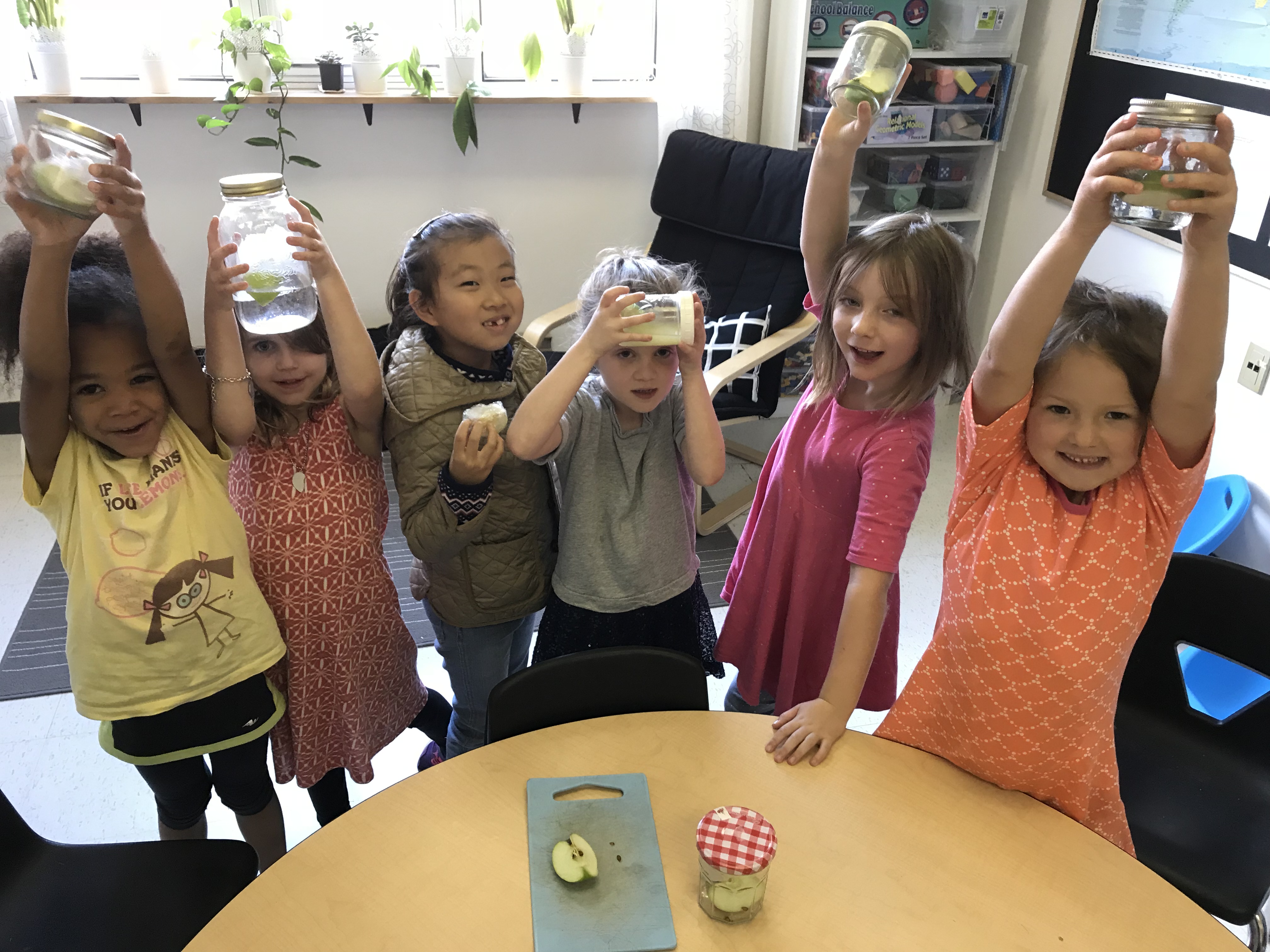 After hypothesizing about what turns cut apples brown when they sit out, the Grade 1-2s designed an apple experiment where they used different solutions and environments to try and prevent the browning. They wrapped them in plastic wrap, put them in containers in the freezer, put them in jars of water, immersed them in lemon juice, soaked them in vinegar, and more. They observed them after a few hours later in the day and recorded their results. 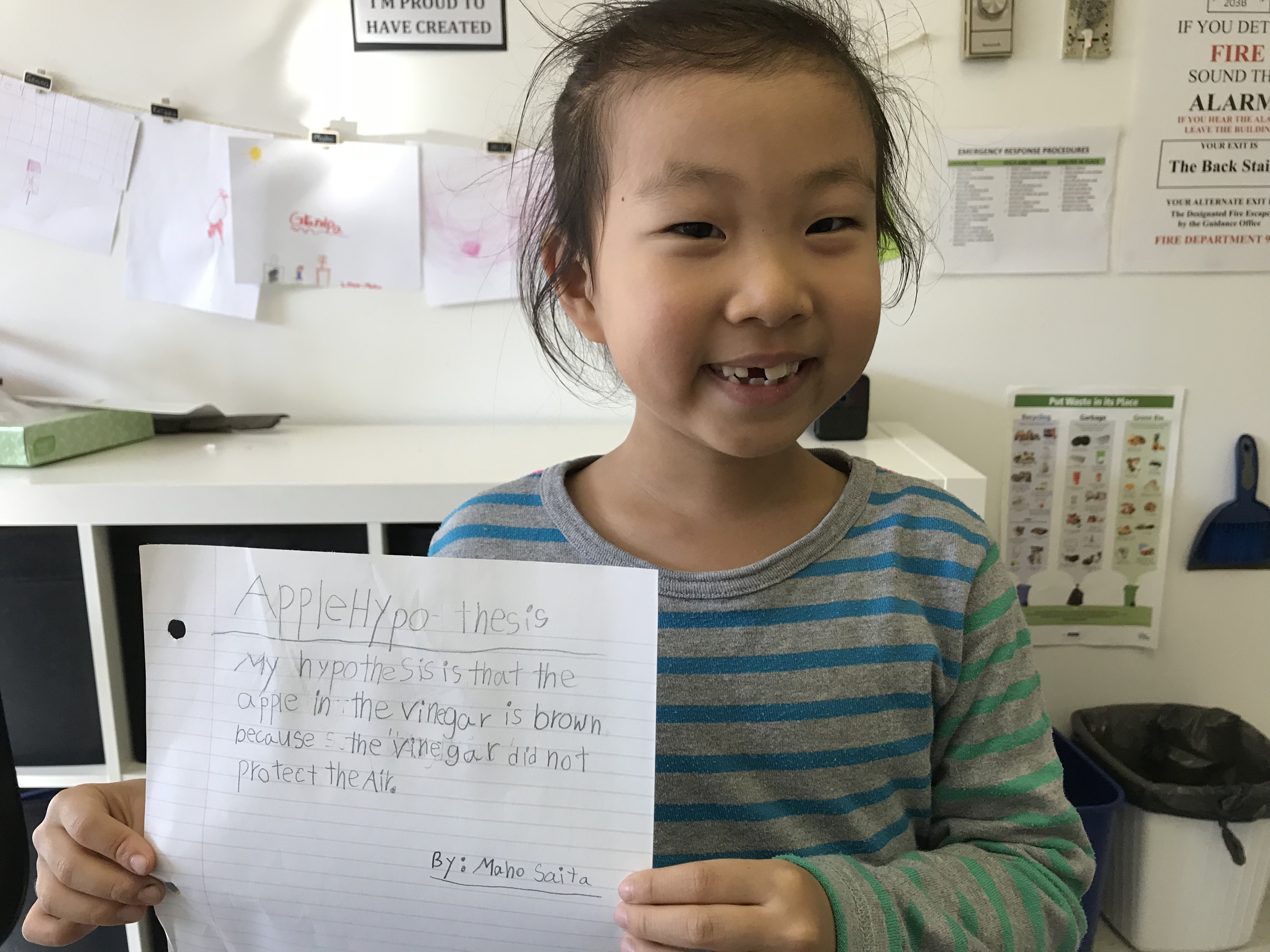 M creates a hypothesis for one of the apples in our apple experiment. She writes "My hypothesis is that the apple in the vinegar is brown because the vinegar did not protect the air." 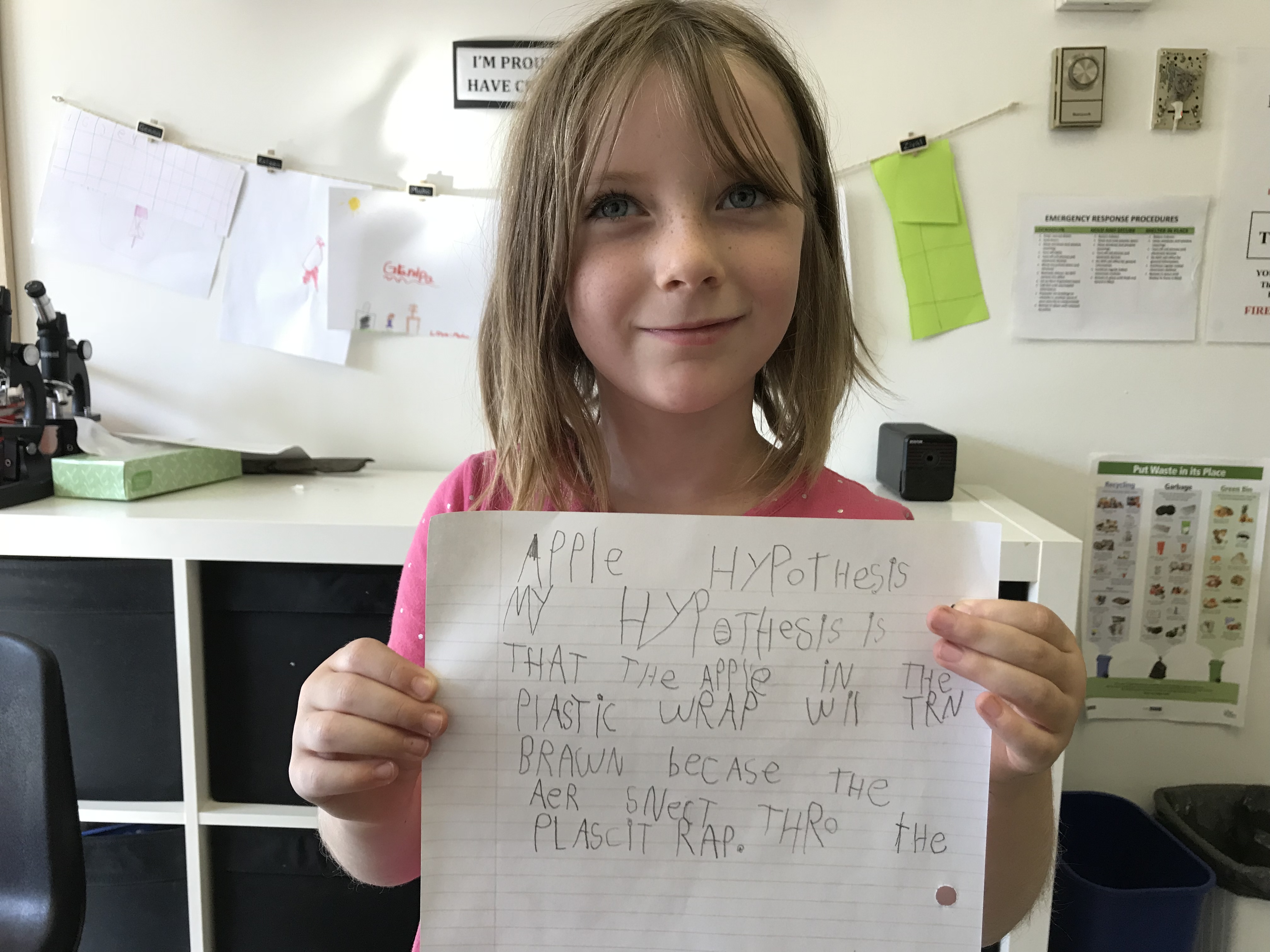 S's hypothesis reads "My hypothesis is that the apple in the plastic wrap will turn brown because the air sneaked through the plastic wrap." The Grade 1-2s are focused on including a scientific explanation in their hypotheses by always including the most important word: BECAUSE. 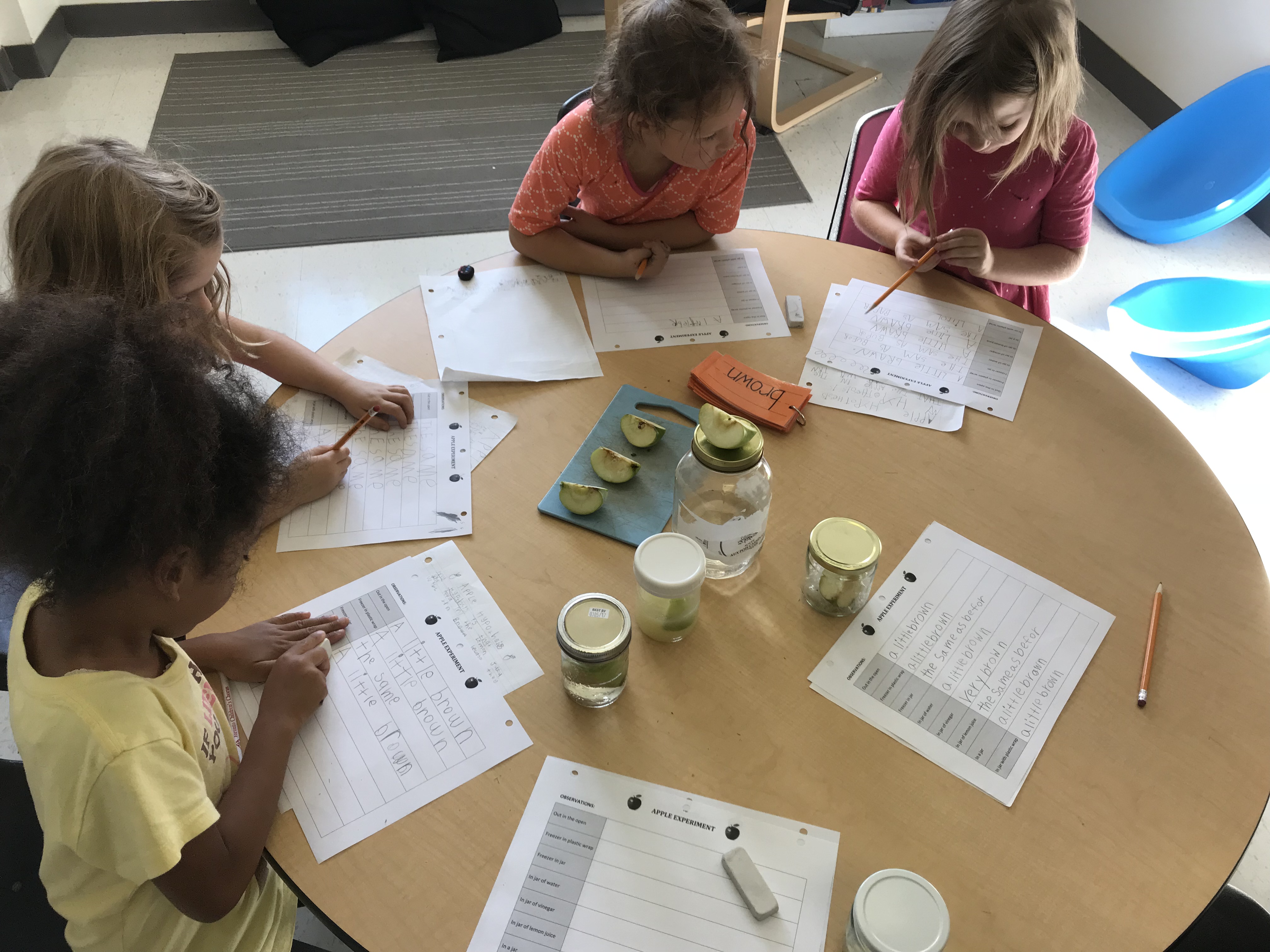 Grade 1-2s work together to establish a scale of measurement for the apples from "The same as before" to "A little brown" to "Very brown" and record their qualitative observations in a chart that they helped design. 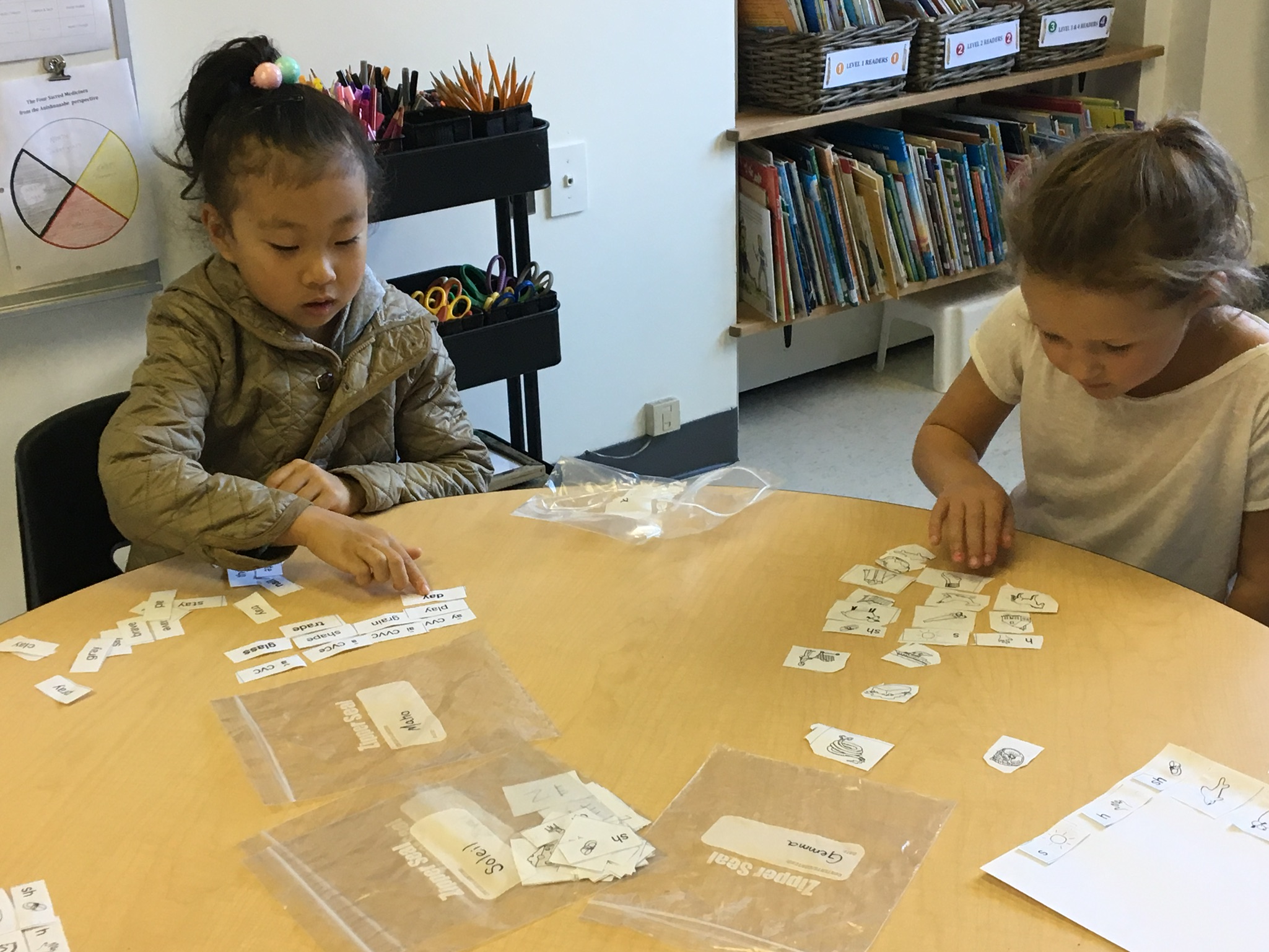 M and K do a final word sort before their Words Their Way post-test on Friday. Both students significantly improved their scores from the beginning of the week. 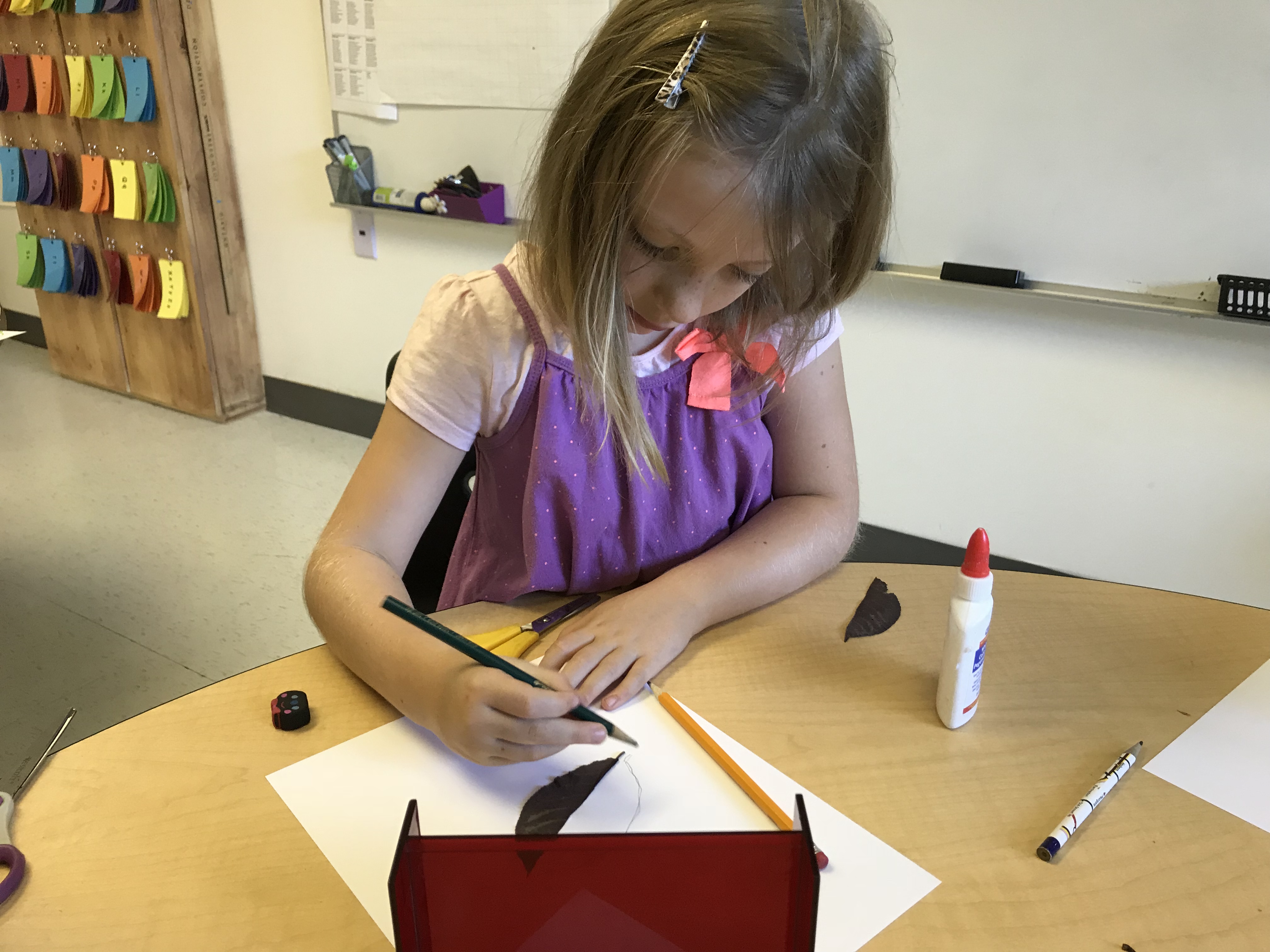 S used a mira to complete the symmtrical copy of her leaf that she dried from earlier in the week. Now she carefully selects a matching pencil crayon to get the right shade of "purpley-brown" and then uses green to draw in the veins of the leaf. 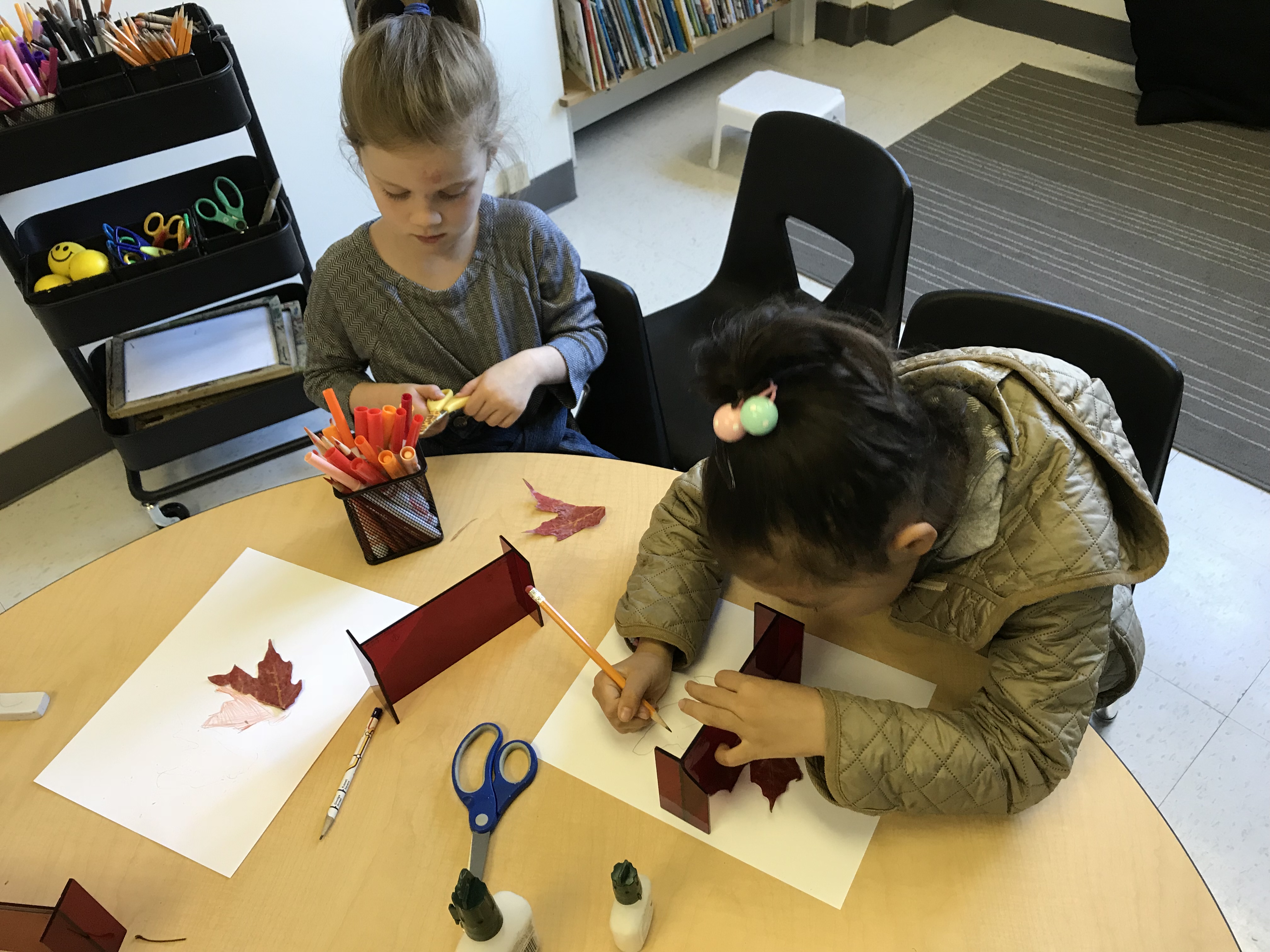 G and M are both proud of their symmetrical leaf designs as they take care to replicate the colours and texture as accurately as possible. 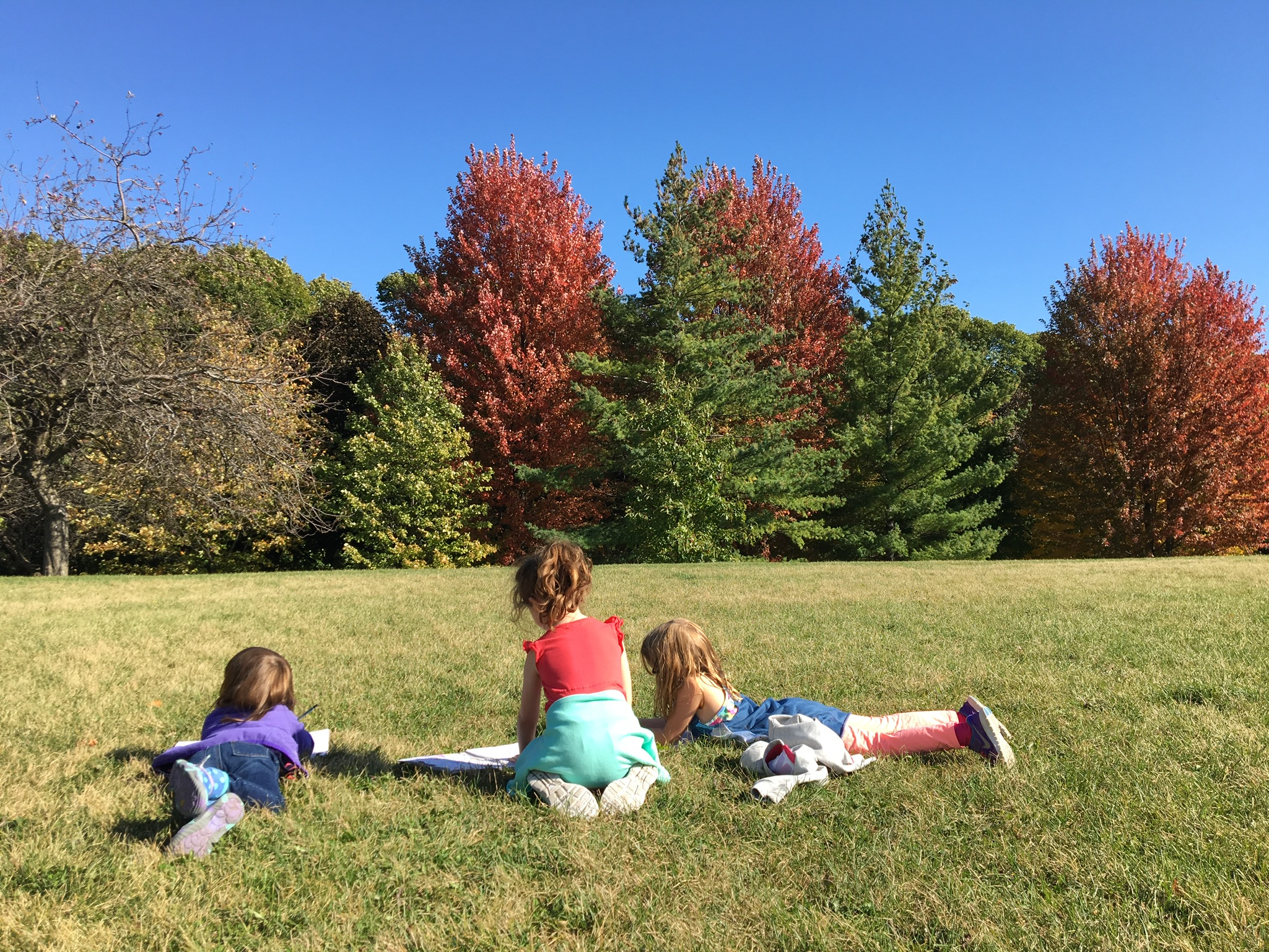 It's easy to get inspired when you are surrounded by beautiful fall colours! M joins the Early Learners in sketching fall trees at the park on Friday. 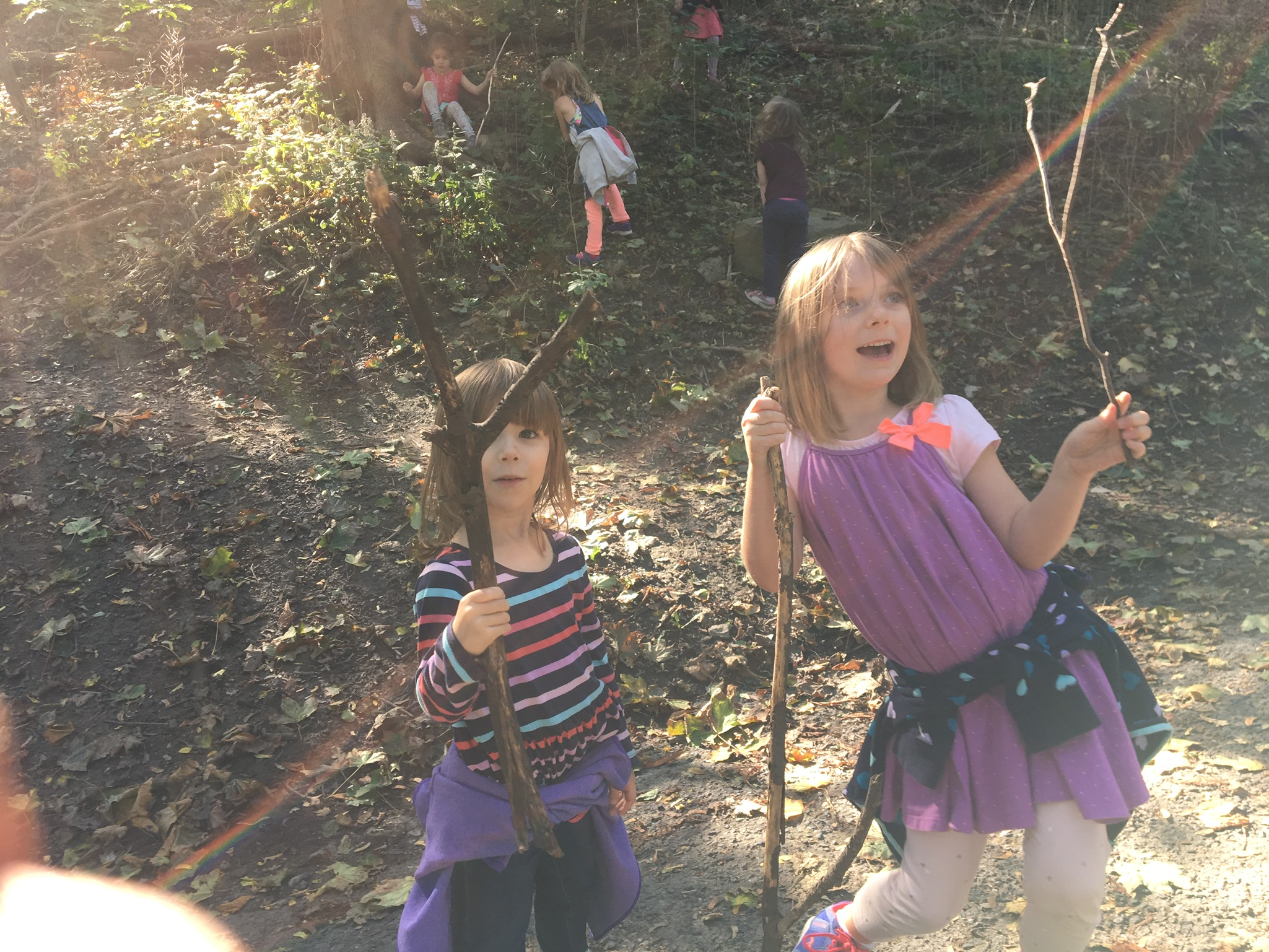 S and A are excited to have found sticks that are shaped like Ys during their Friday ravine walk and S thinks about a friend whose name starts with Y that might enjoy the stick. 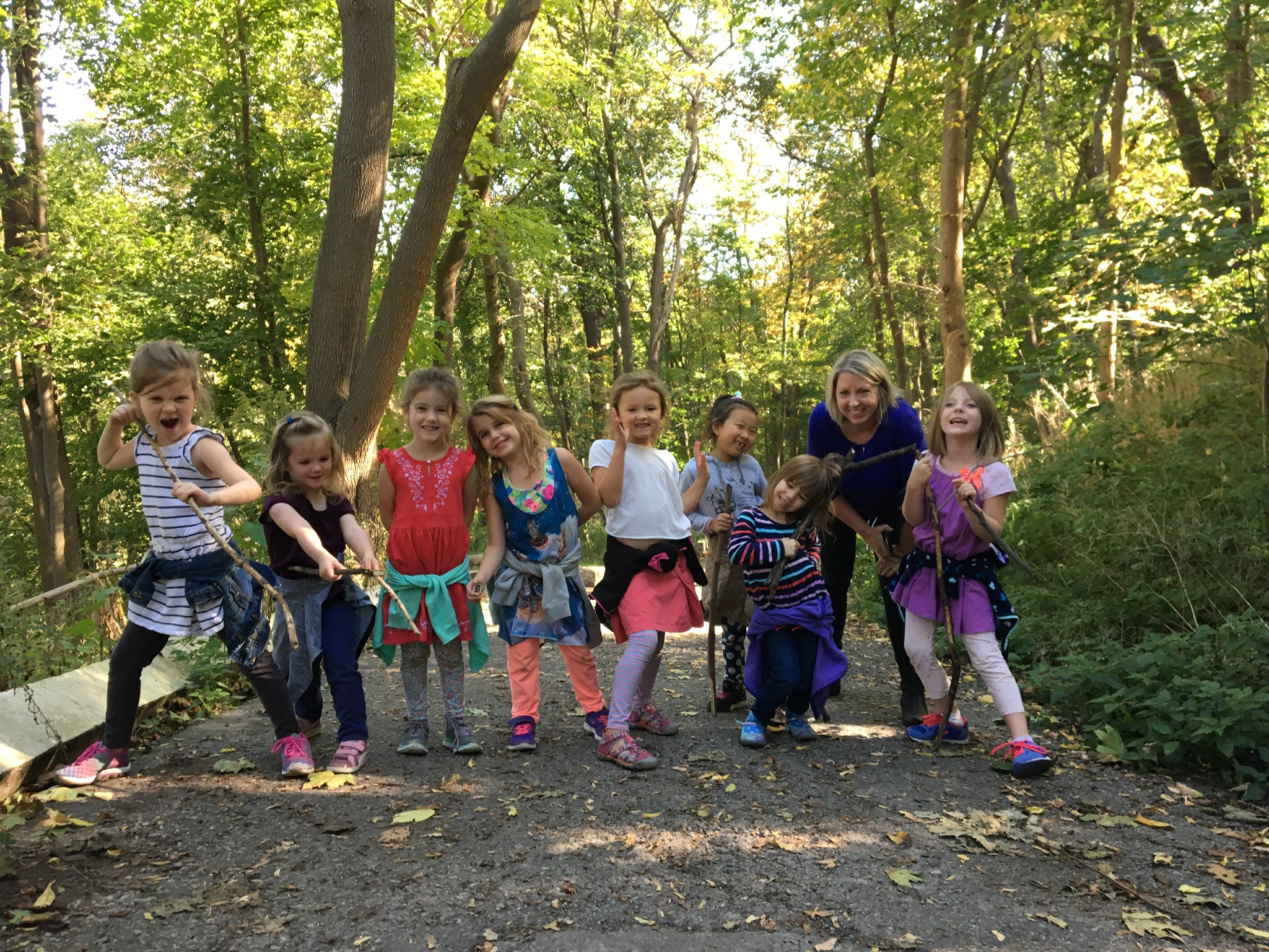 After sketching in the park, students from Grade 1-2 come together with the Early Learners for a ravine walk. Special thanks to Nancy for joining us this week while Soteira was coaching cross country!