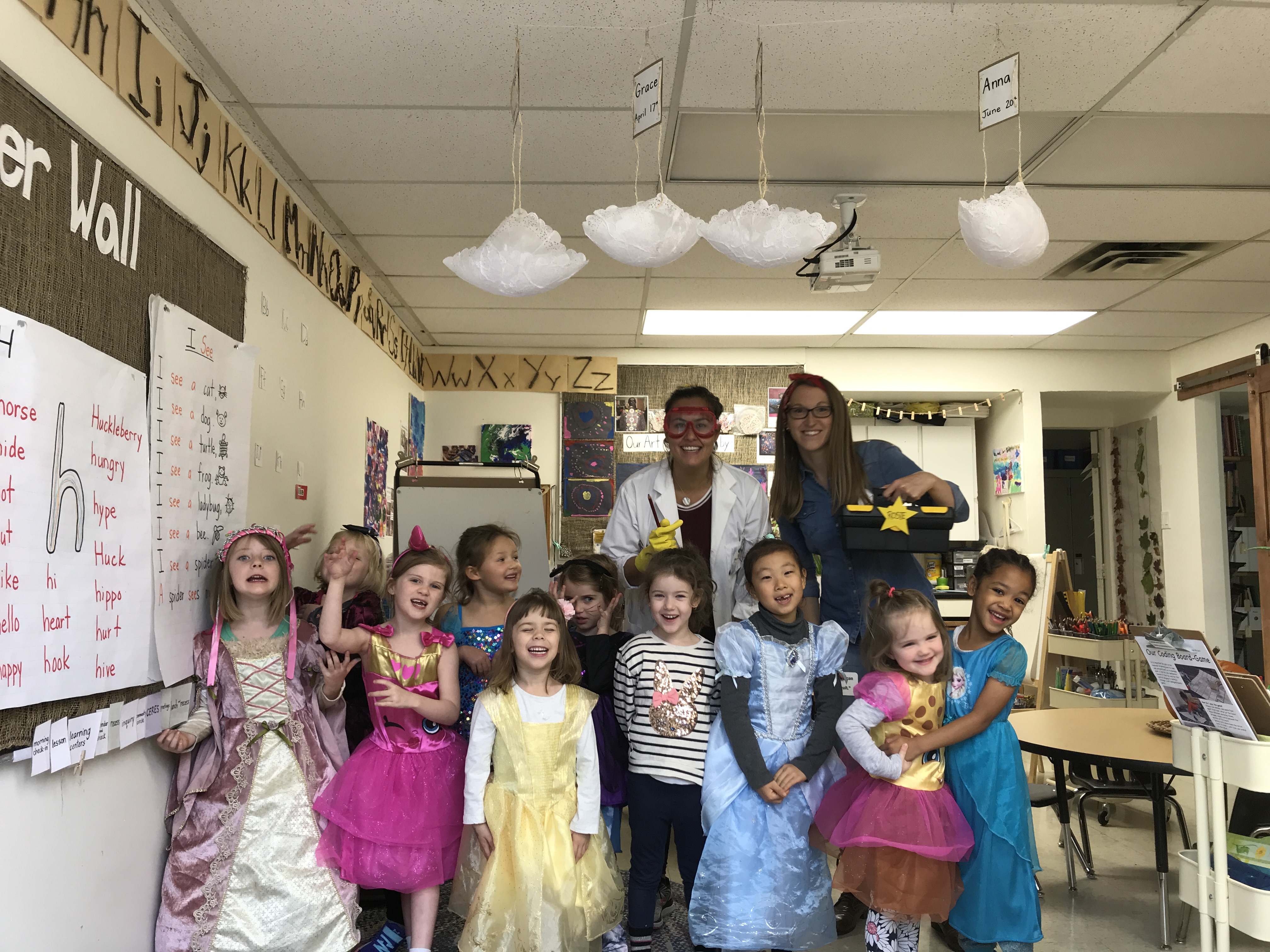 Students in the Grade 1-2 class have spent the week collecting data for our upcoming Social Justice Data Fair. They designed two unique survey questions each about different types of waste sorting and disposal, and have been working their way through the task of surveying every student in the school while practicing their tally marks. We are also beginning to connect our learning to issues of food security and access in the North. In addition, we have started to experiment with regrowing vegetables from food scraps in our classroom and in the last week, our lettuce has doubled in size! On Tuesday, there were many festive celebrations and creative costumes around the school. Grade 1-2s enjoyed a special centres period with the Early Learners where they built spooky structures, practiced measurement with a pumpkin, and built a skeleton on the light table. In CERES class, they also focused on building while exploring a variety of materials including pasta and cardboard. After a few weeks of organizing and announcements, Grade 1-2 students also saw their shelter service day project come to fruition. Rain wasn't able to dampen our spirits as the Grade 1-2s chanted about raking leaves on their walk to the 1st Stop Woodlawn Shelter. They dropped off many bags of personal care items and fresh food donated by members of our community and were overjoyed by the response they got from the shelter staff. After dropping off the donations, the Grade 1-2s worked together with all other Linden students to clean up fallen leaves in the shelter yard in an effort to help maintain a welcoming outdoor space for shelter residents to take care of themselves as they transition to more secure housing. 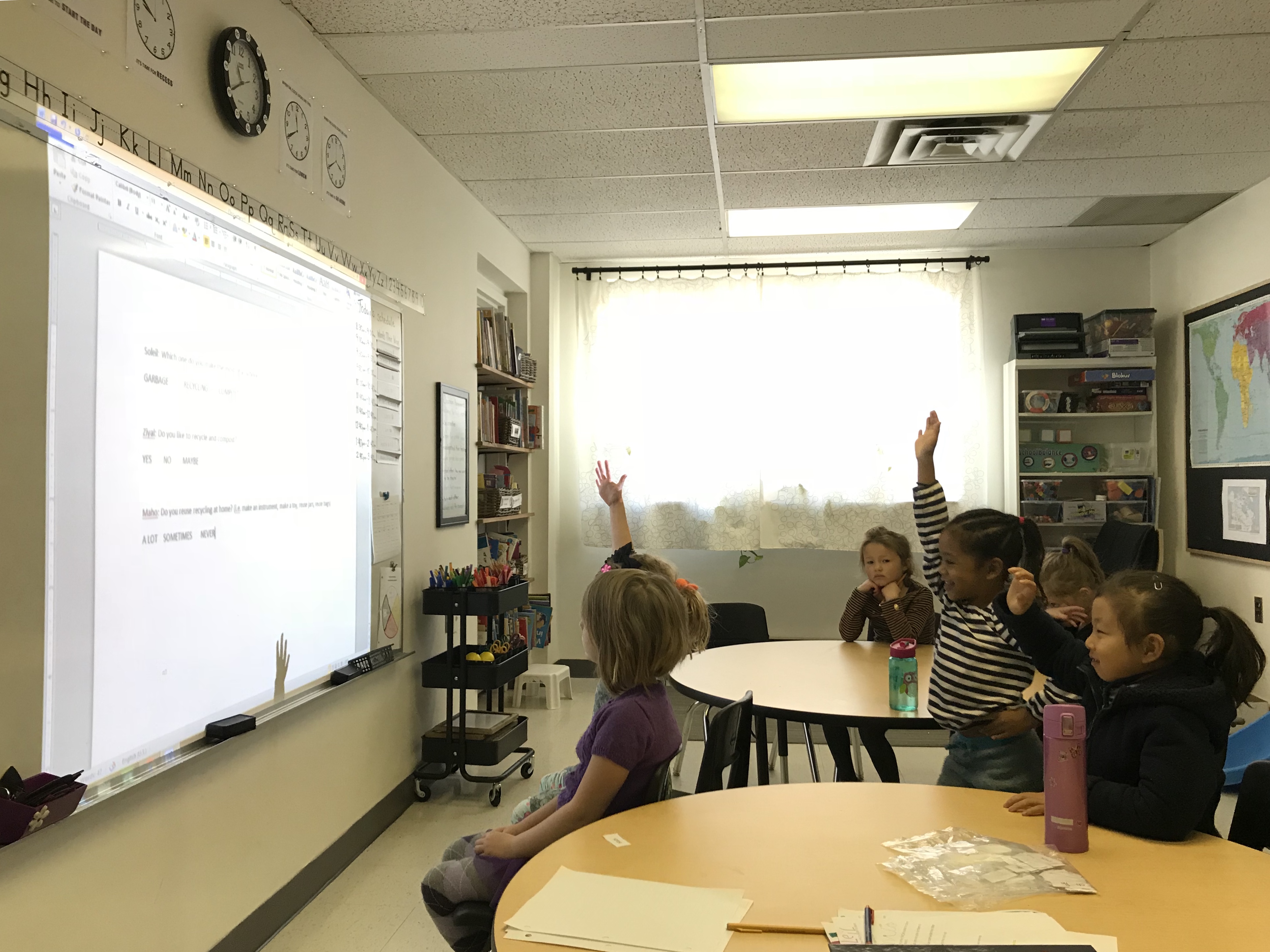 Grade 1-2s work together to prepare two survey questions each for Social Justice Data Fair, including "Do you reuse recycling at home? (i.e. to make an instrument, make a toy, reuse jars, reuse bags)", "Which do you think you produce the most of at school: garbage, recycling, or compost?", and questions asking about where to sort commonly misplaced items (i.e. bubble wrap, plastic shopping bags, and disposable coffee cups). 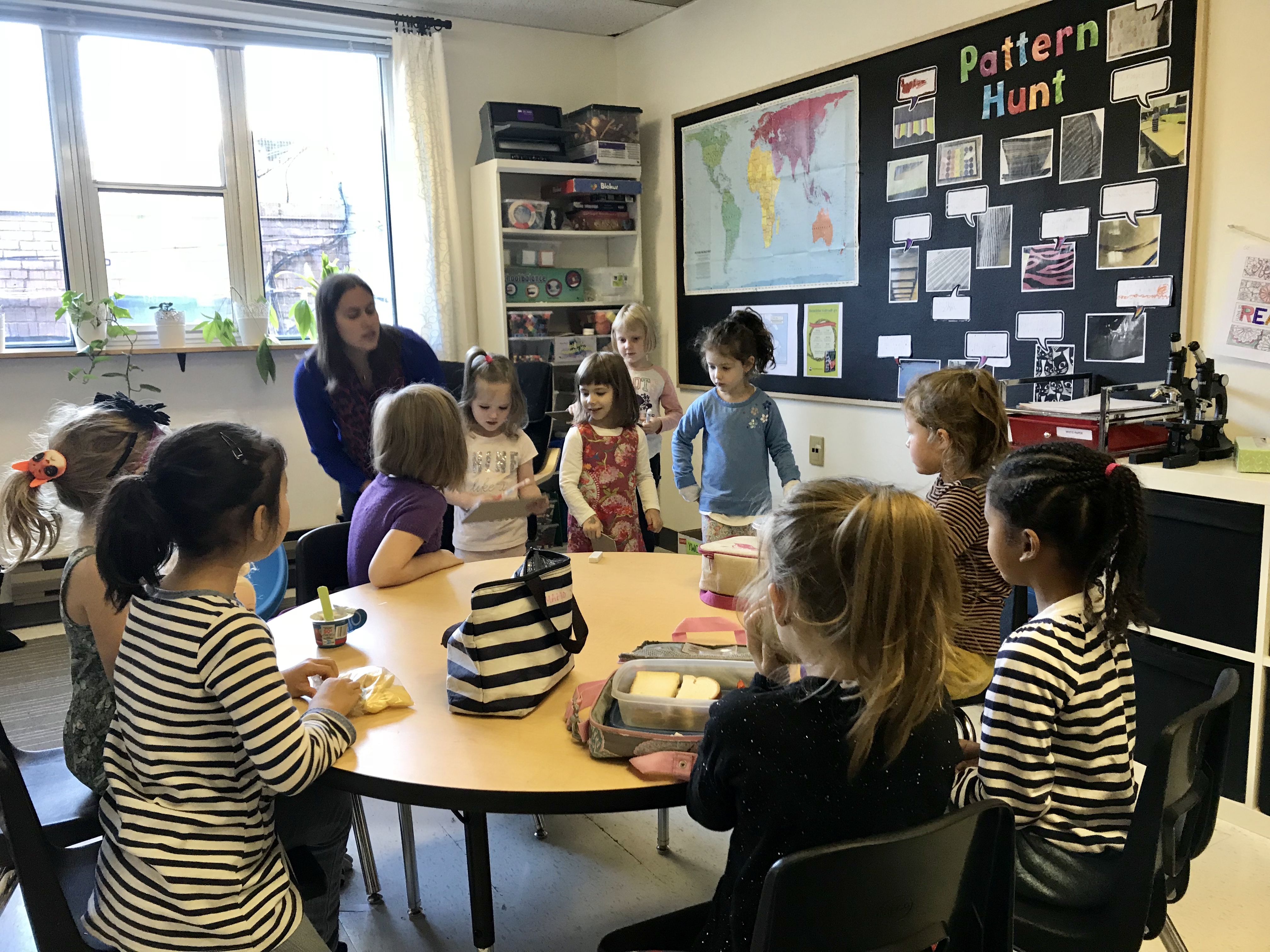 The Early Learners visit during our morning snack to survey the Grade 1-2s about whether they compost and recycle at home, as well as whether they help pack their lunches or grocery shop. 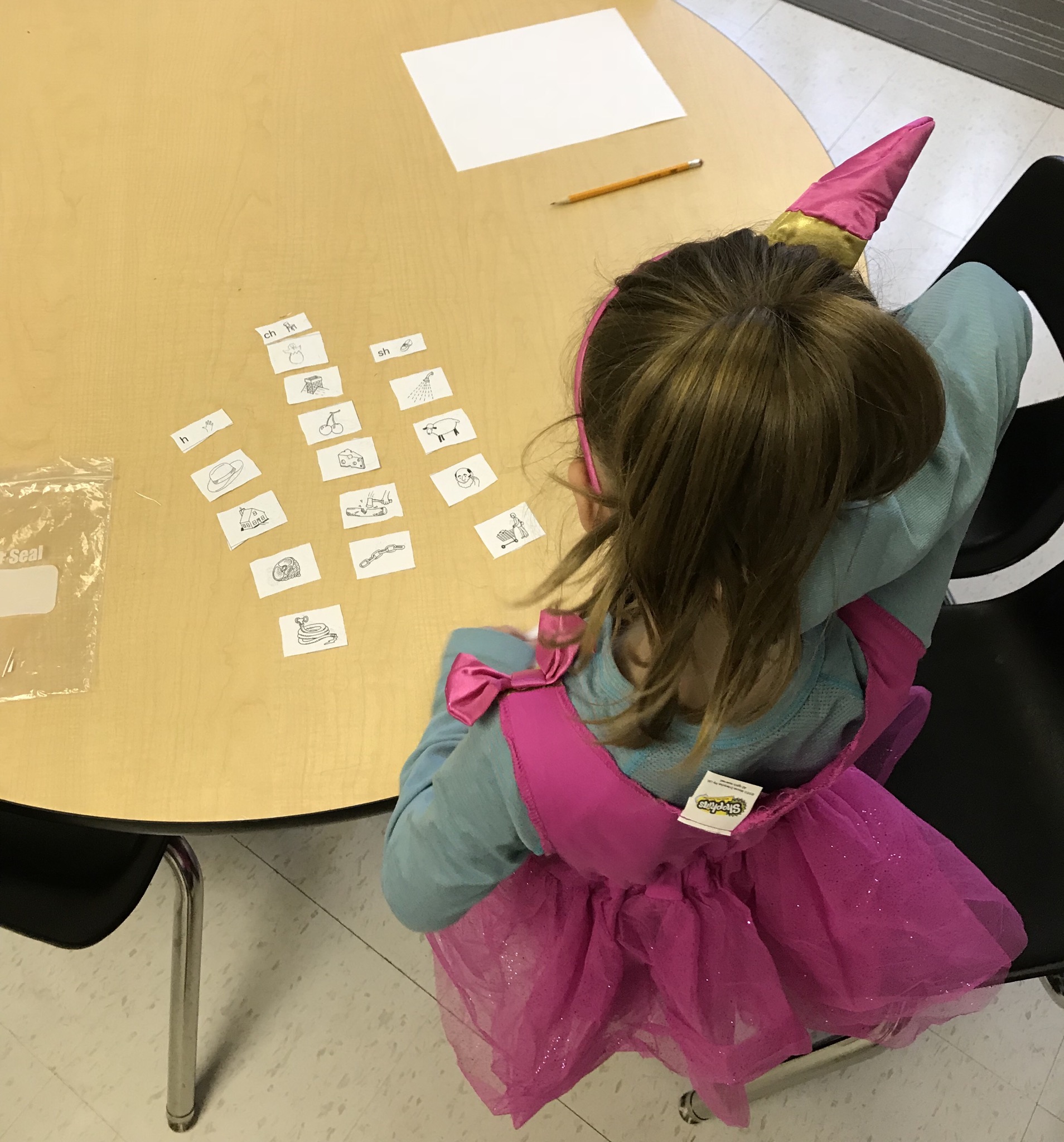 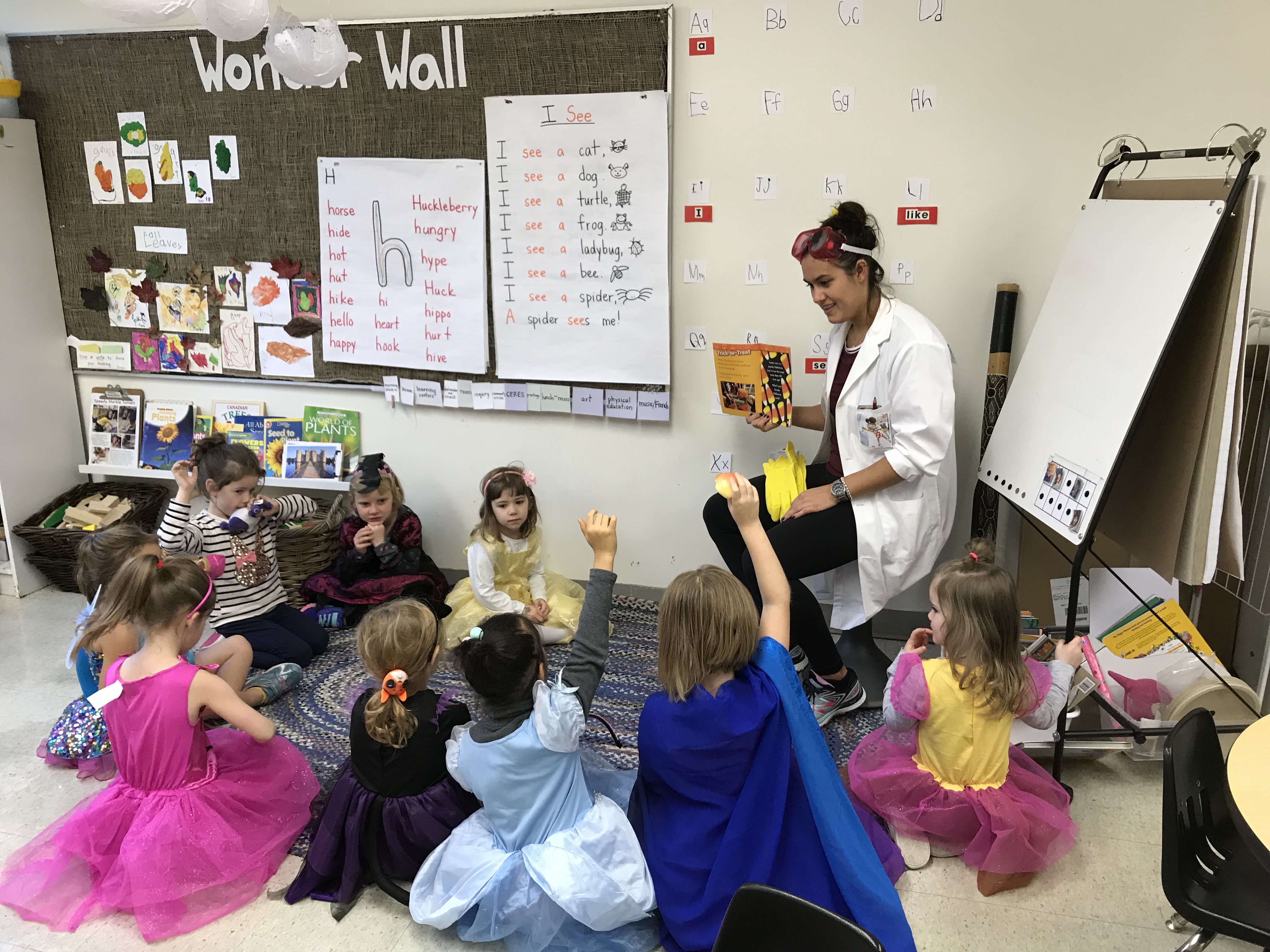 Savannah reads a book about how Halloween and other fall festivals are celebrated around the world to the Grade 1-2s and Early Learners. The section on people dressing up their pets in costumes was a definite highlight! 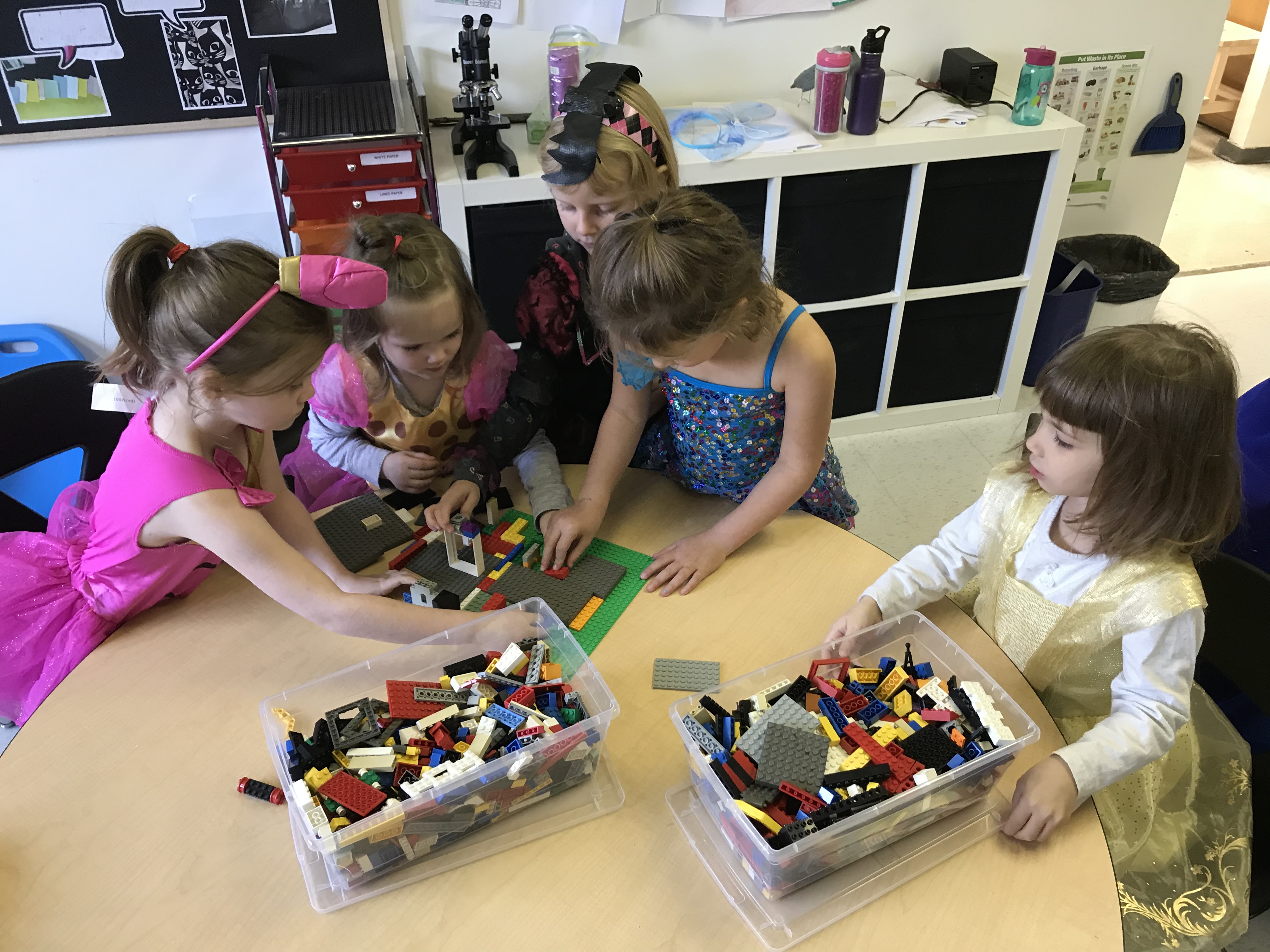 G and K worked with the Early Learners to build a haunted LEGO creation on Halloween. 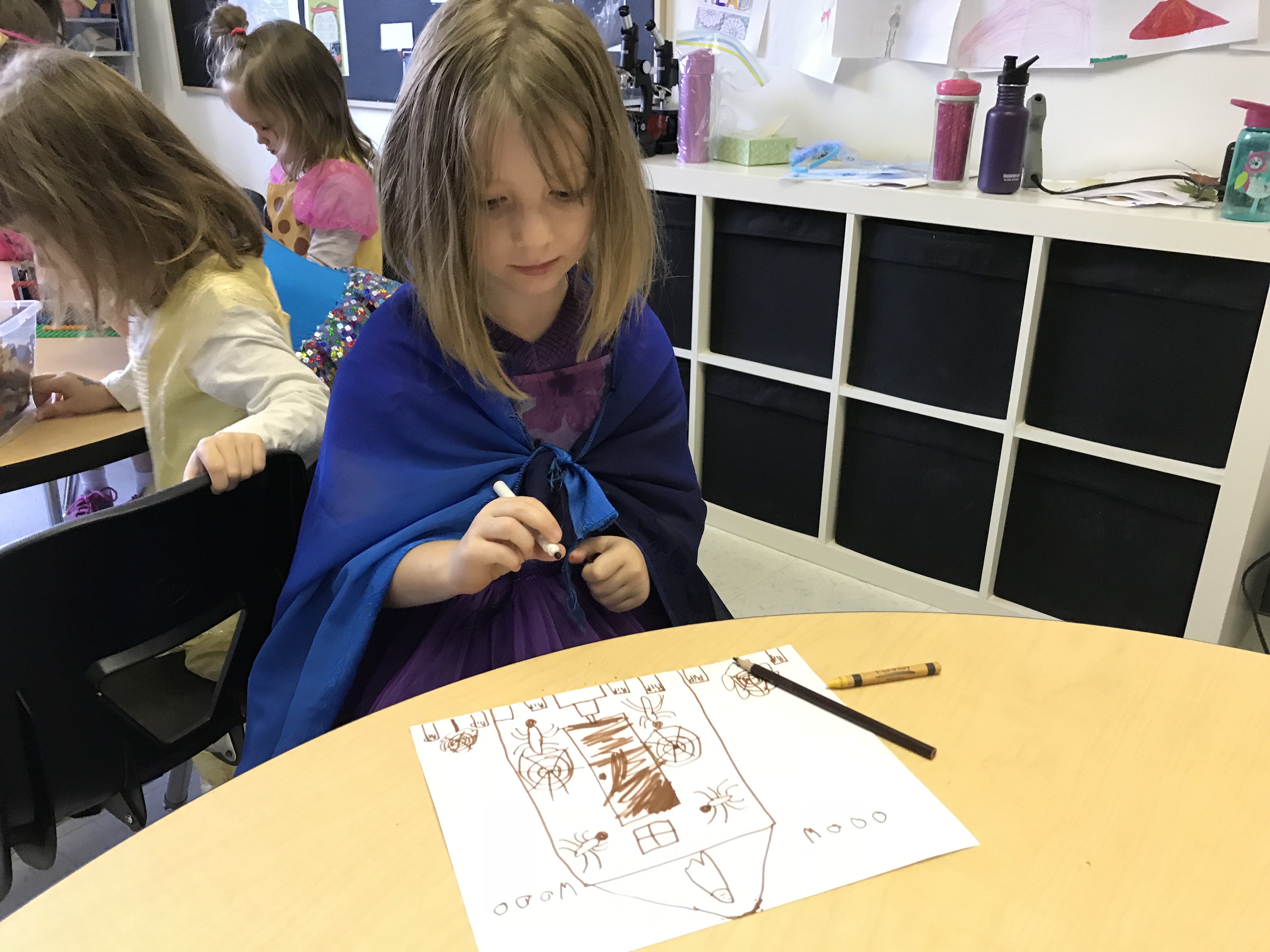 S designs a haunted house during a Halloween art centres activity and then distributes pieces of it to friends and teachers as a gift. 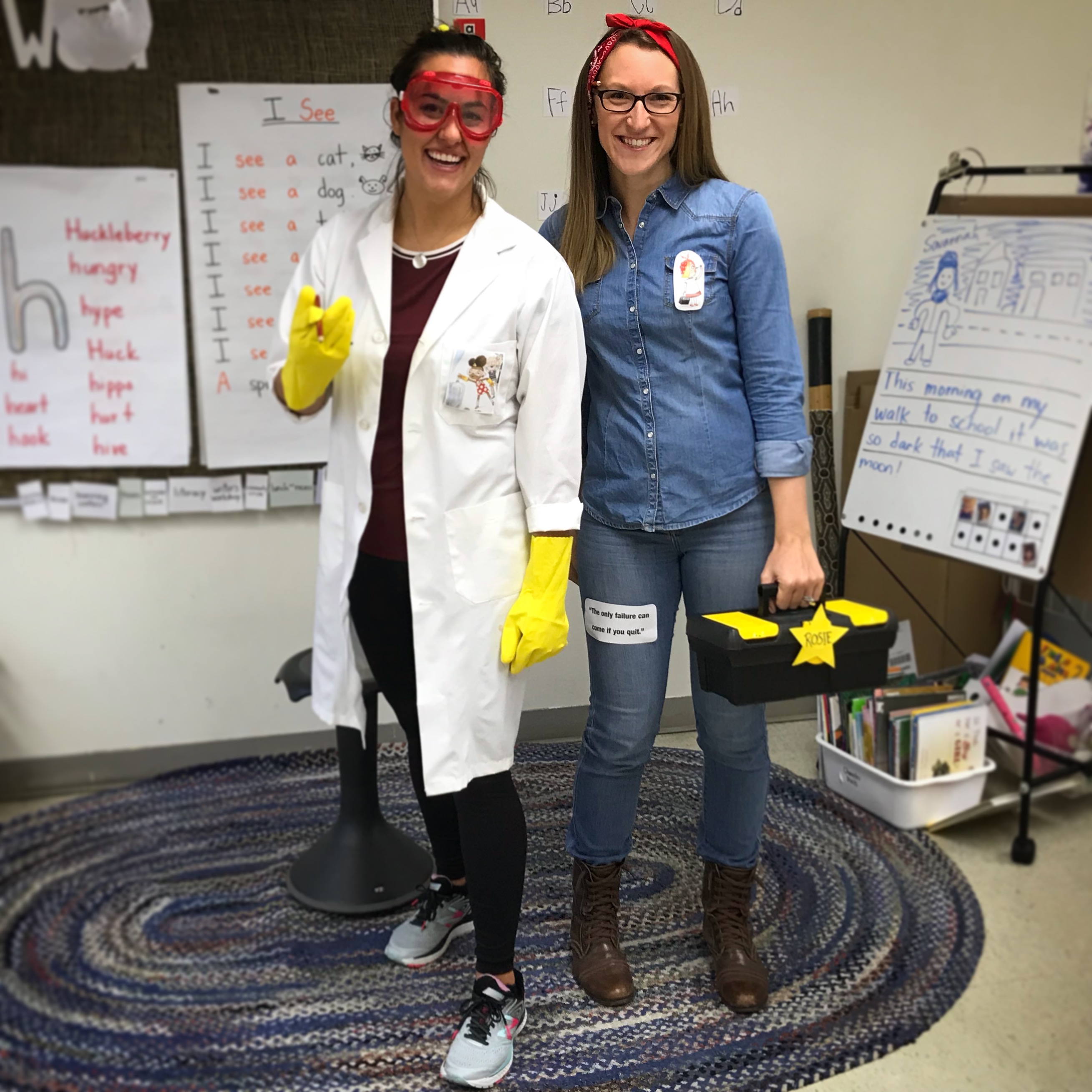 After reading Rosie Revere, Engineer and Ada Twist, Scientist in class a few weeks ago to reinforce the importance of resilience and making mistakes in STEM, Savannah and Soteira decided to dress up as the fearless main characters for Halloween. 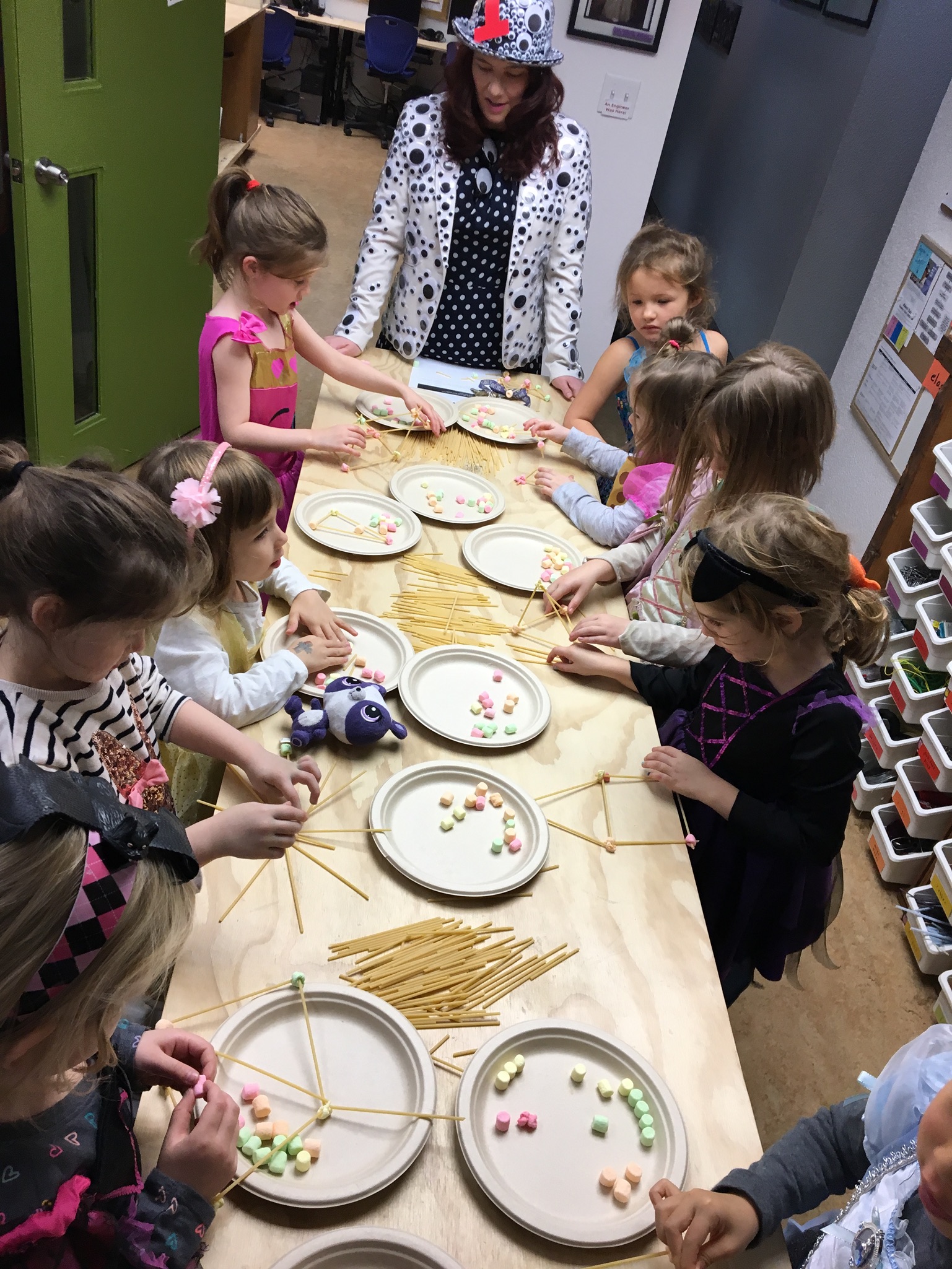 In CERES class, students use bucatini and marshmallows to try and build creative structures using what they have learned about strong shapes. 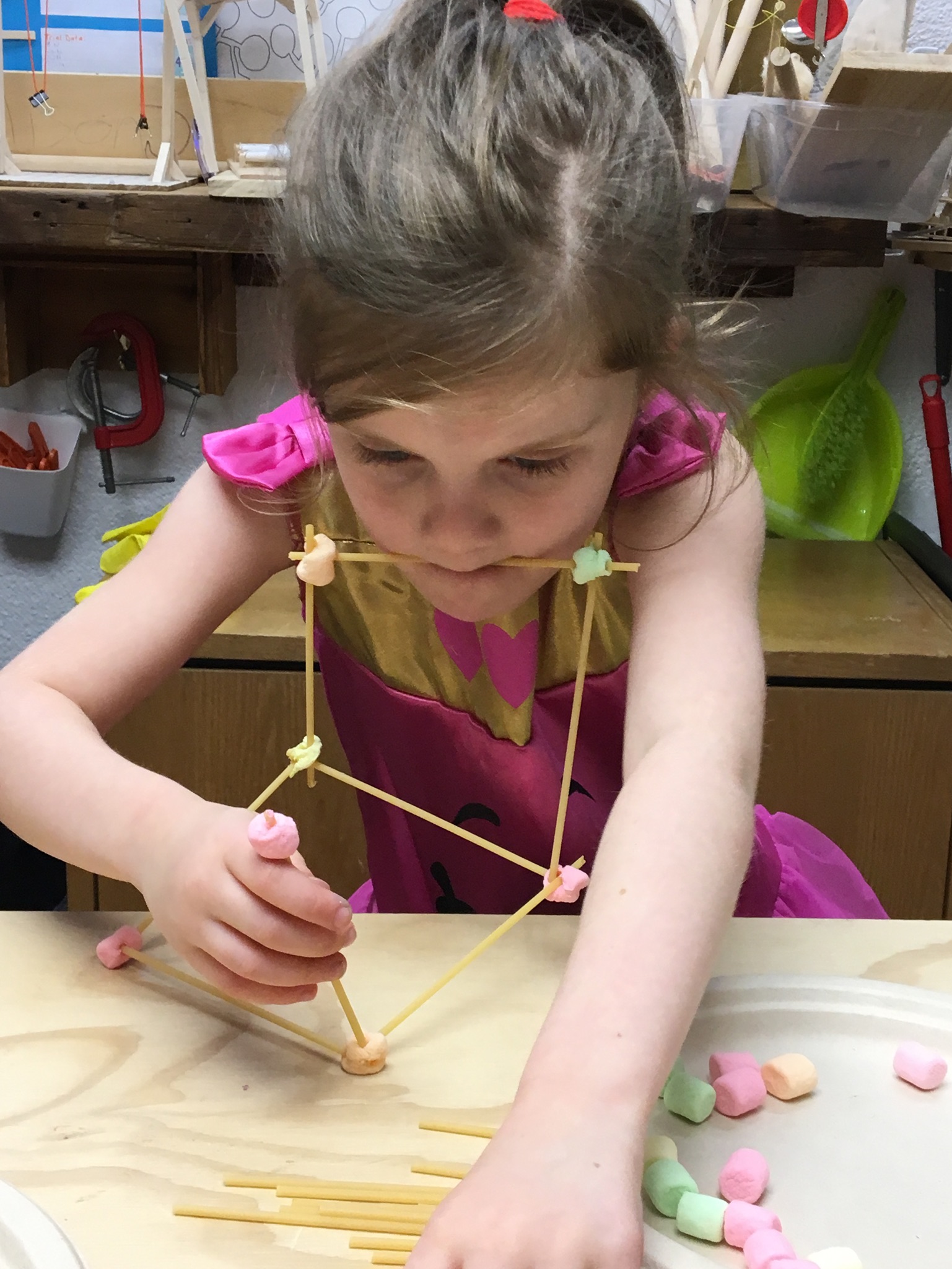 G runs out of hands and gets creative with how she holds her structure. The girls remembered that structures with wide bases are more stable from their tests with their straw structures. 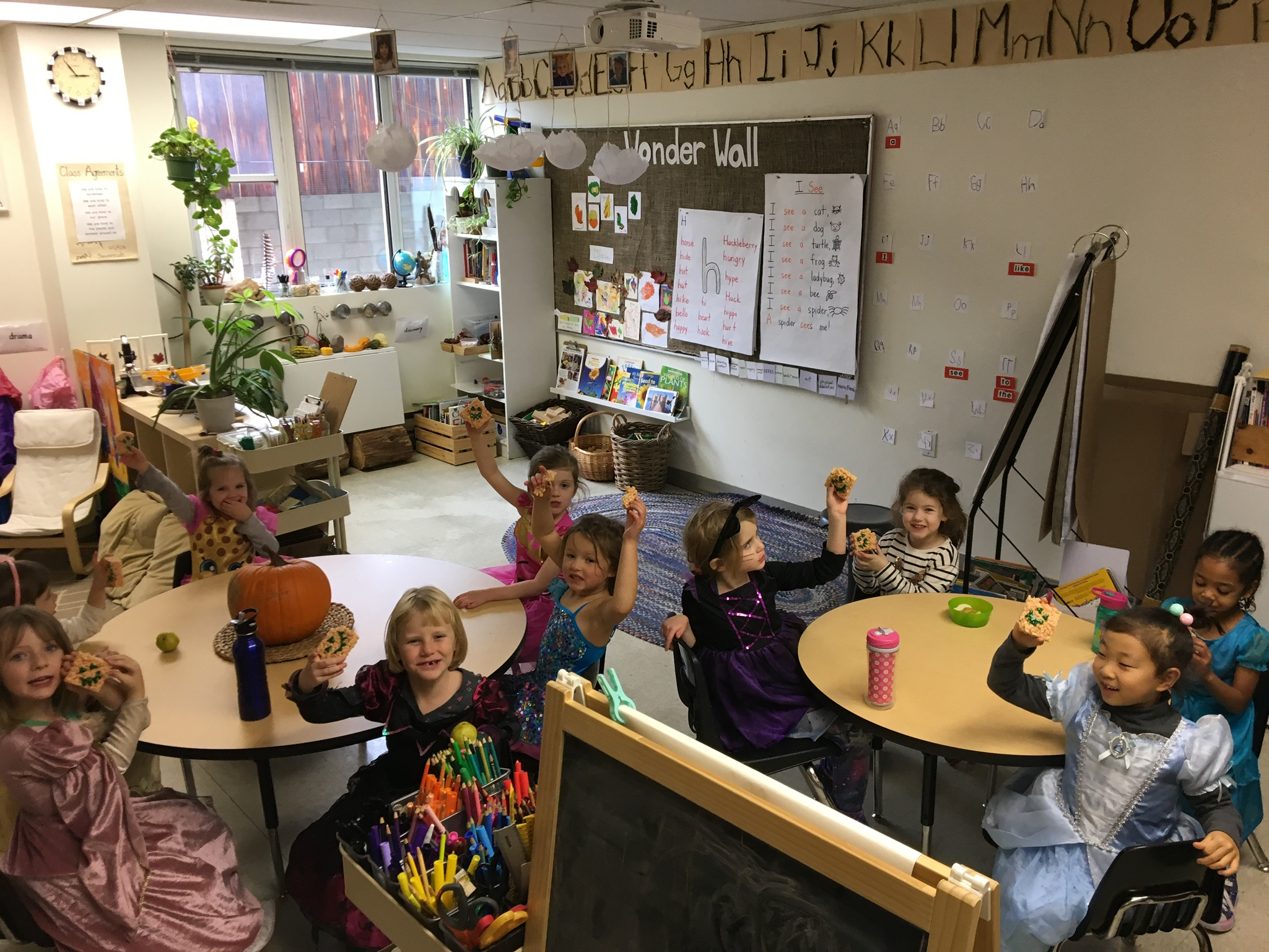 Students display the Halloween rice crispy treats that Savannah made for them. 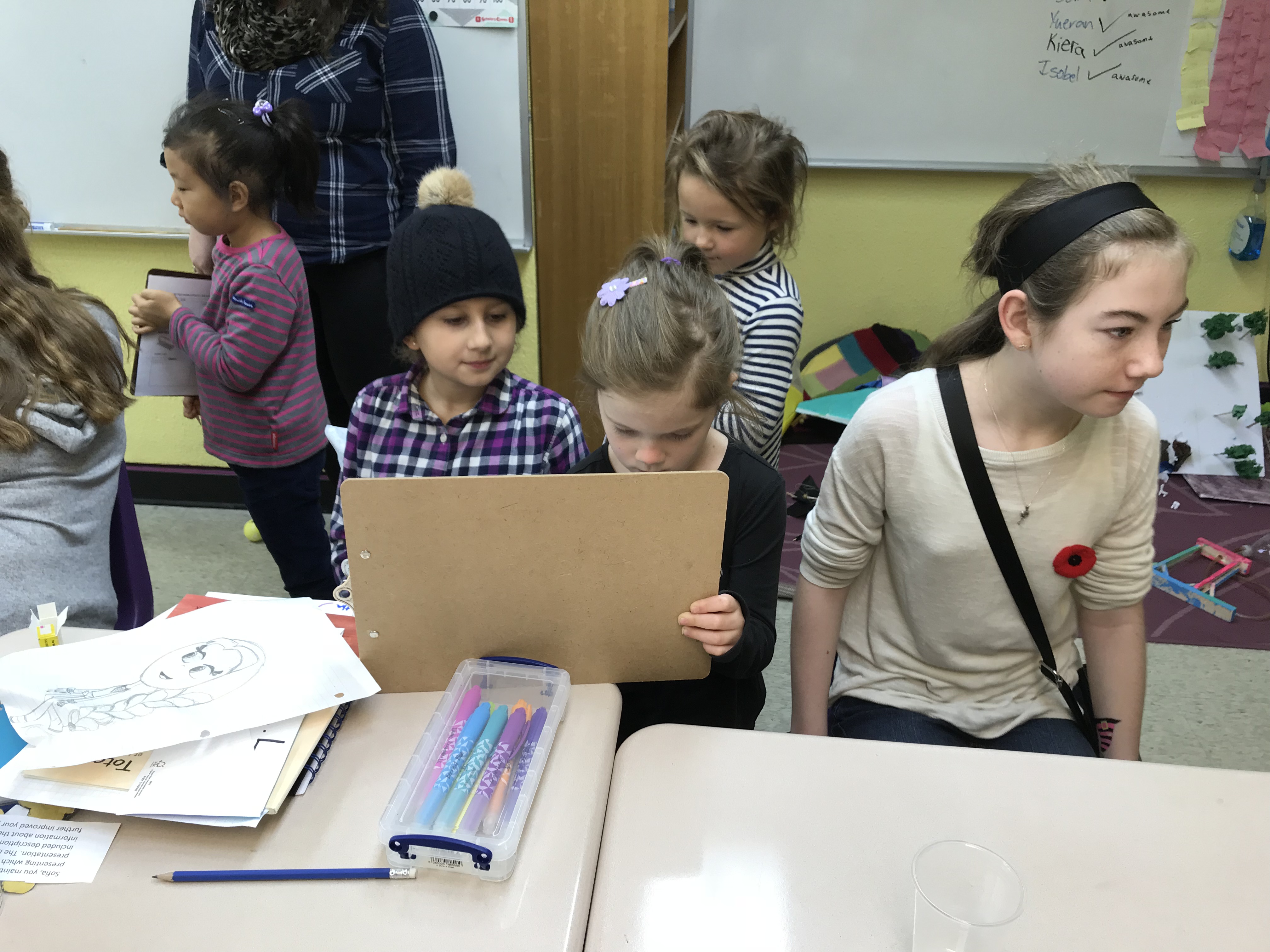 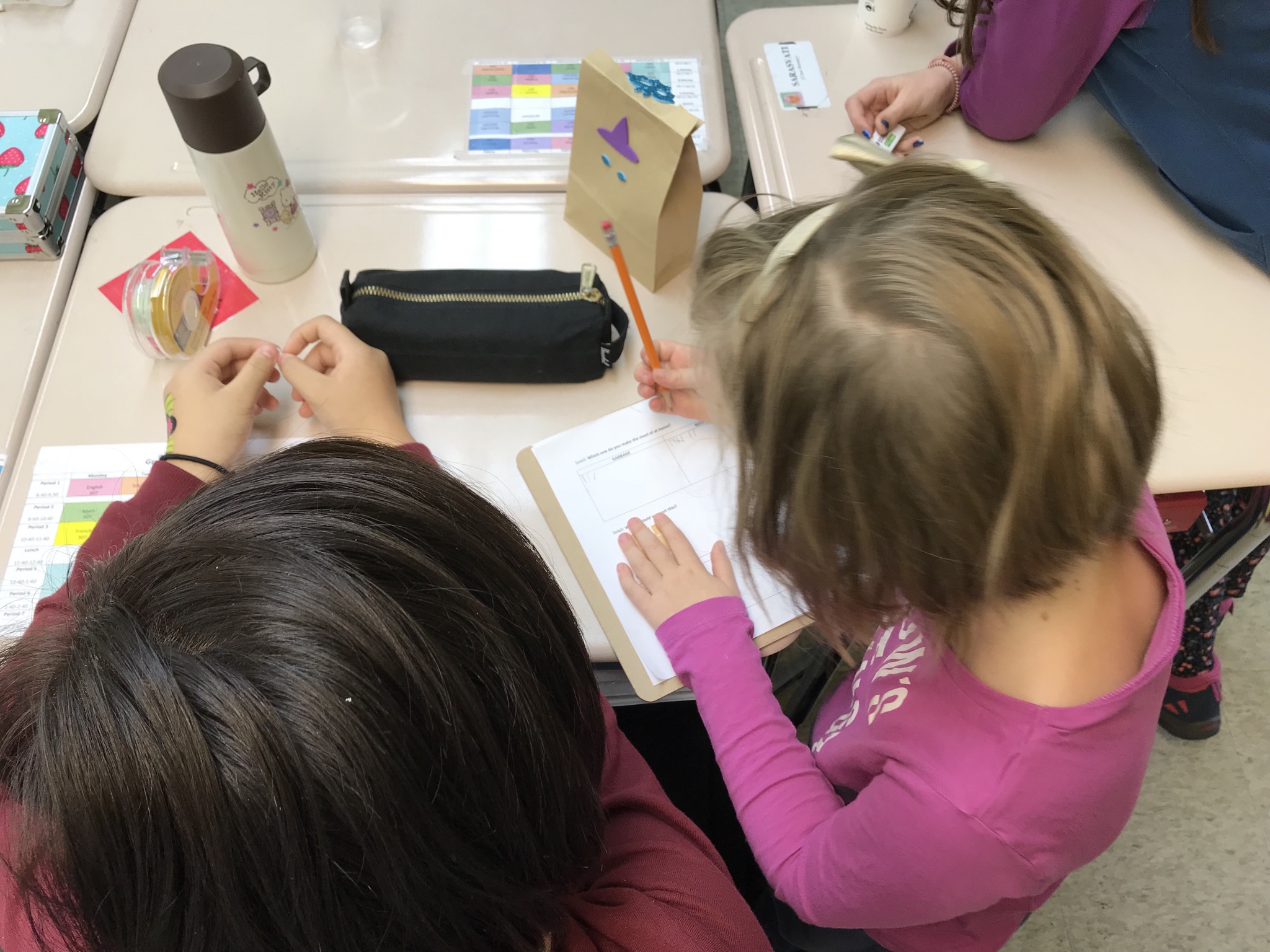 S asks a grade six student about what type of waste she makes the most of at home. So far, recycling is the most common response for all members of our school community. 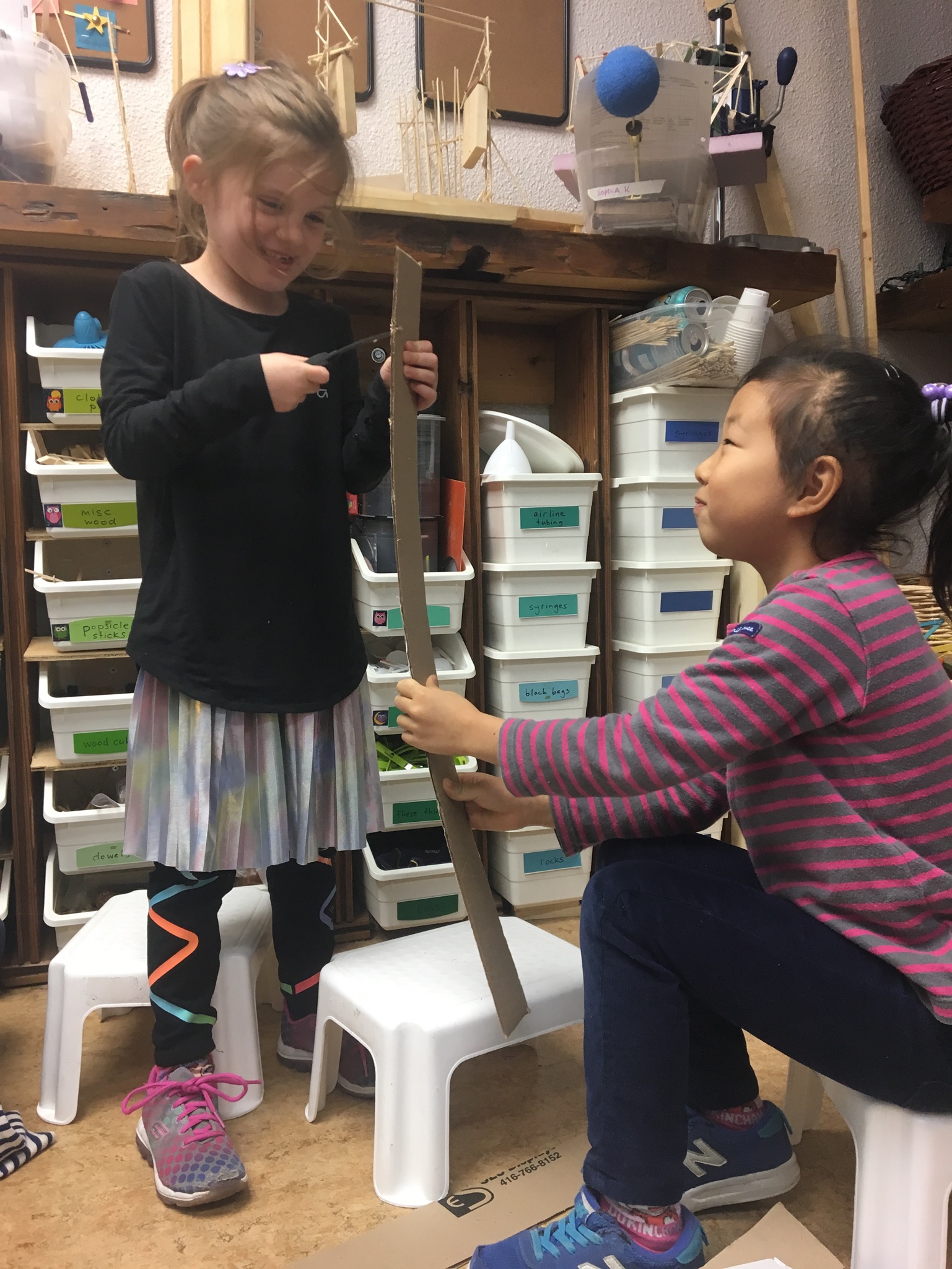 G and M work together using Makedo to construct a large-scale structure in CERES. 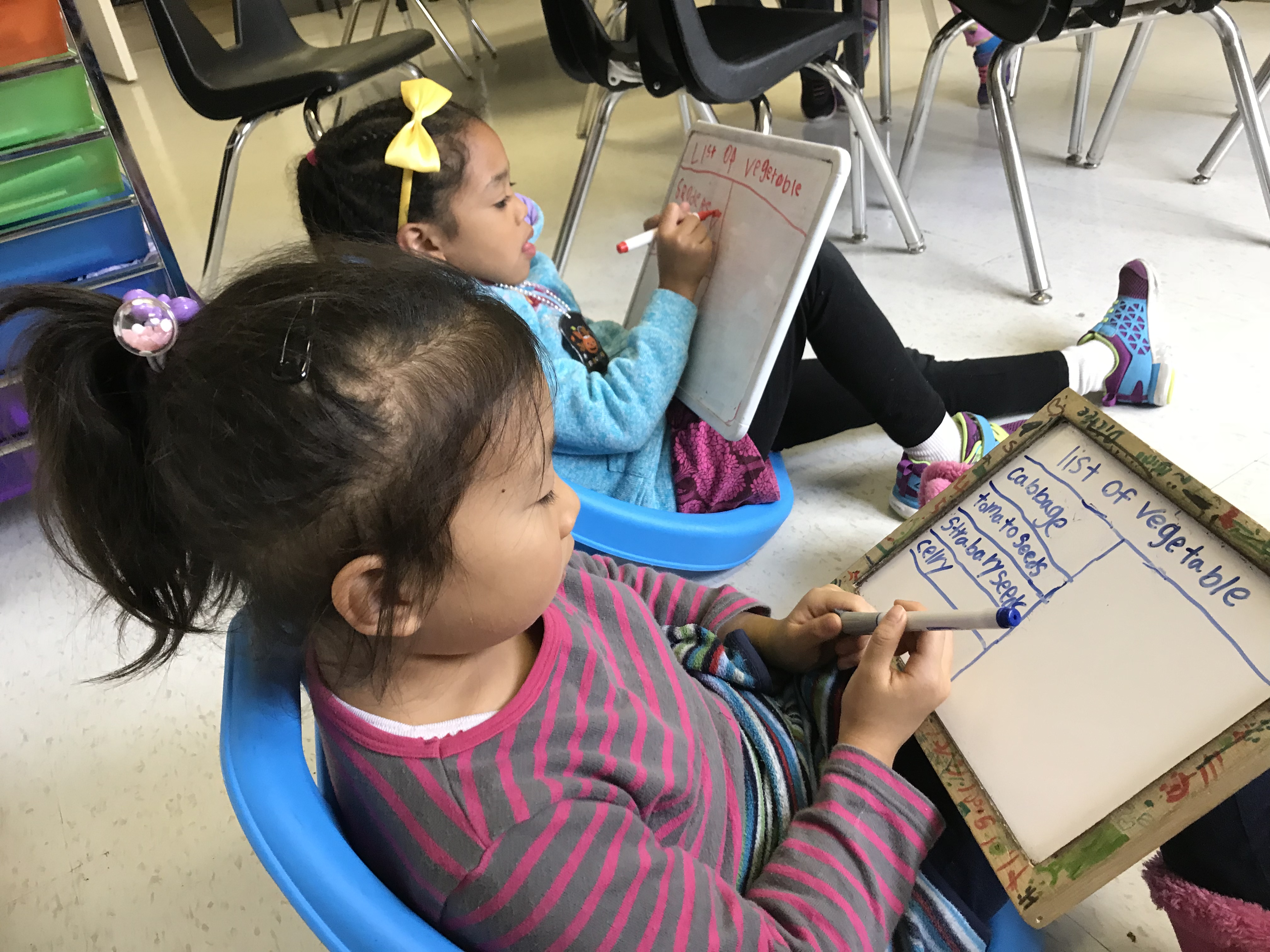 Z and M try to make a list of foods they could attempt to regrow in their classroom. So far, we have a very successful head of lettuce growing in the Grade 1-2 room. 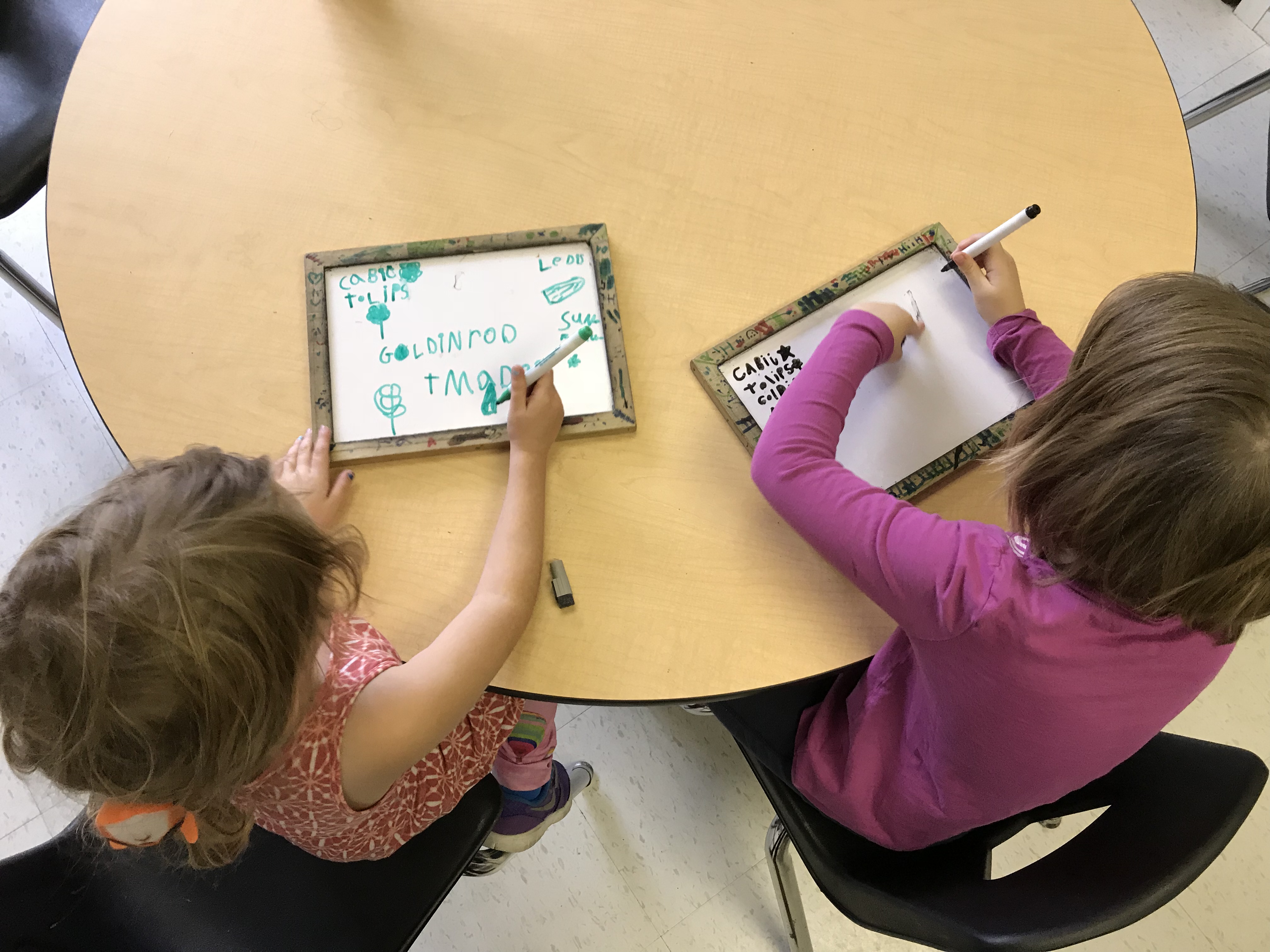 M and S brainstorm fruits and vegetables that they think they could regrow from food waste scraps. 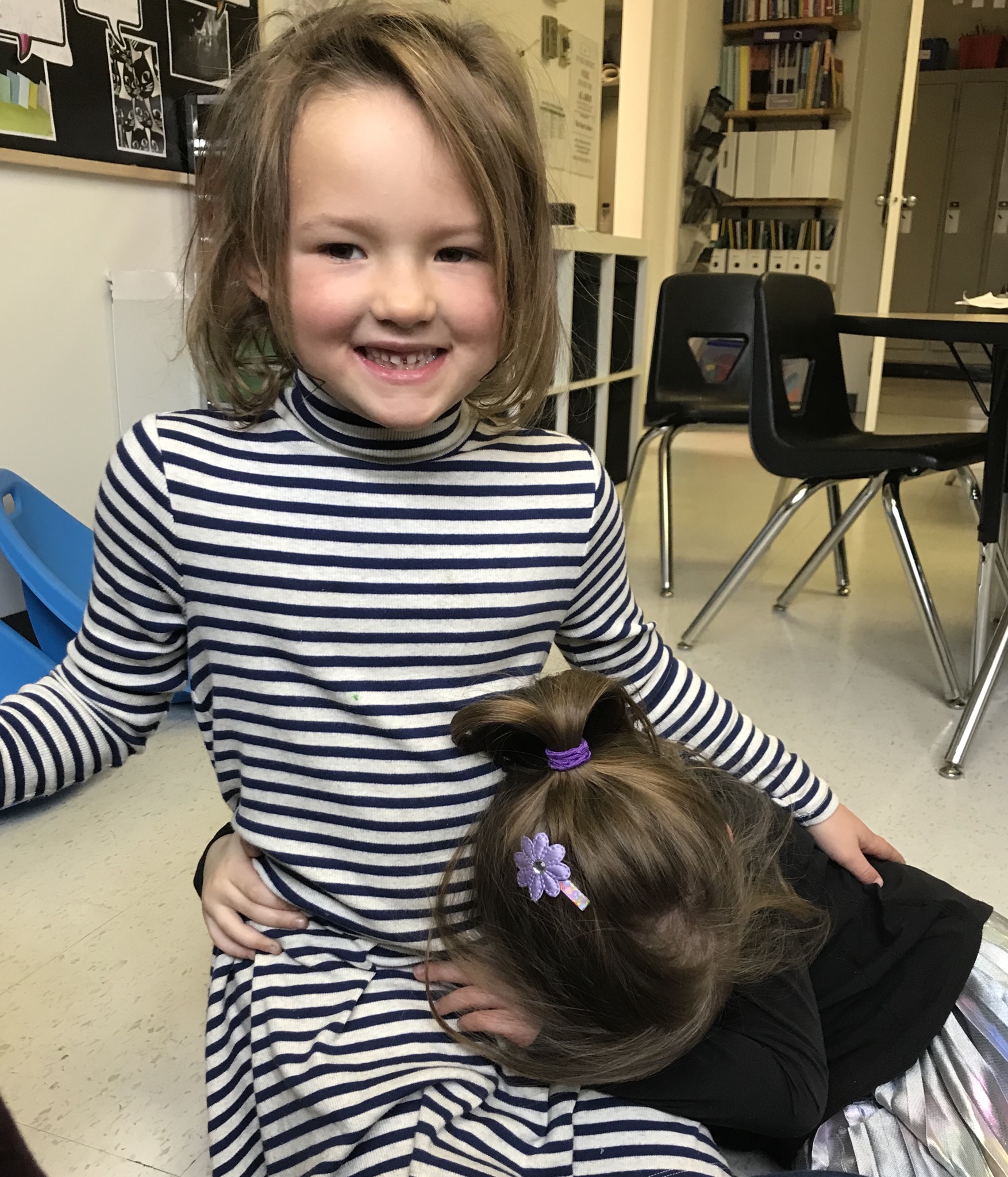 G is feeling snuggly and gives K a big hug around her middle after a circle discussion on the carpet. 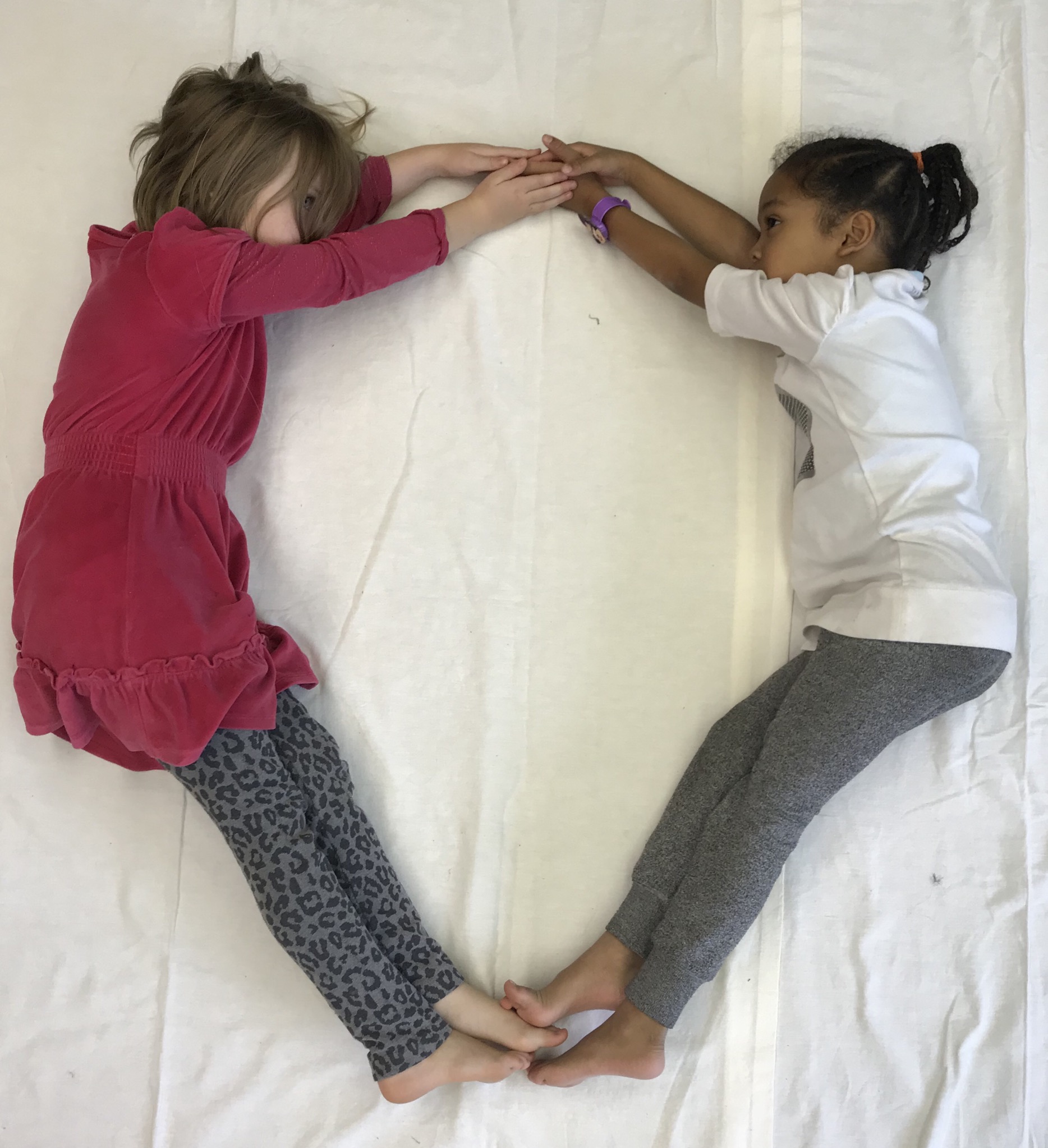 Z helps S form the O for her portfolio name. Together, students helped each other spell all the letters of their names using their bodies and then used the letters they formed to personalize their portfolios. 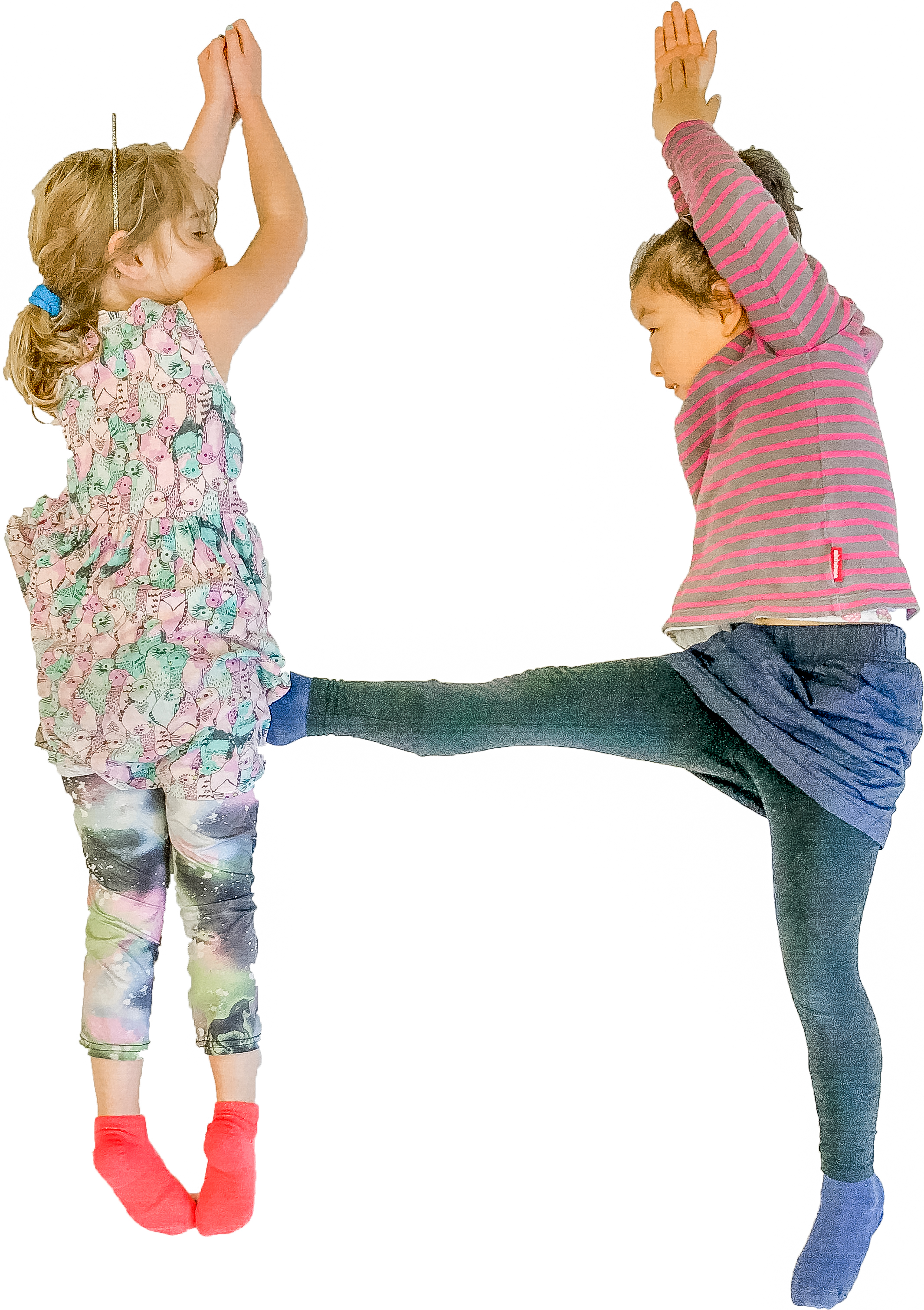 M and M work together to use their bodies to spell the letters in their names for the side of their portfolios. M was very proud to be able to make the H, saying that it was possible because she is so flexible. 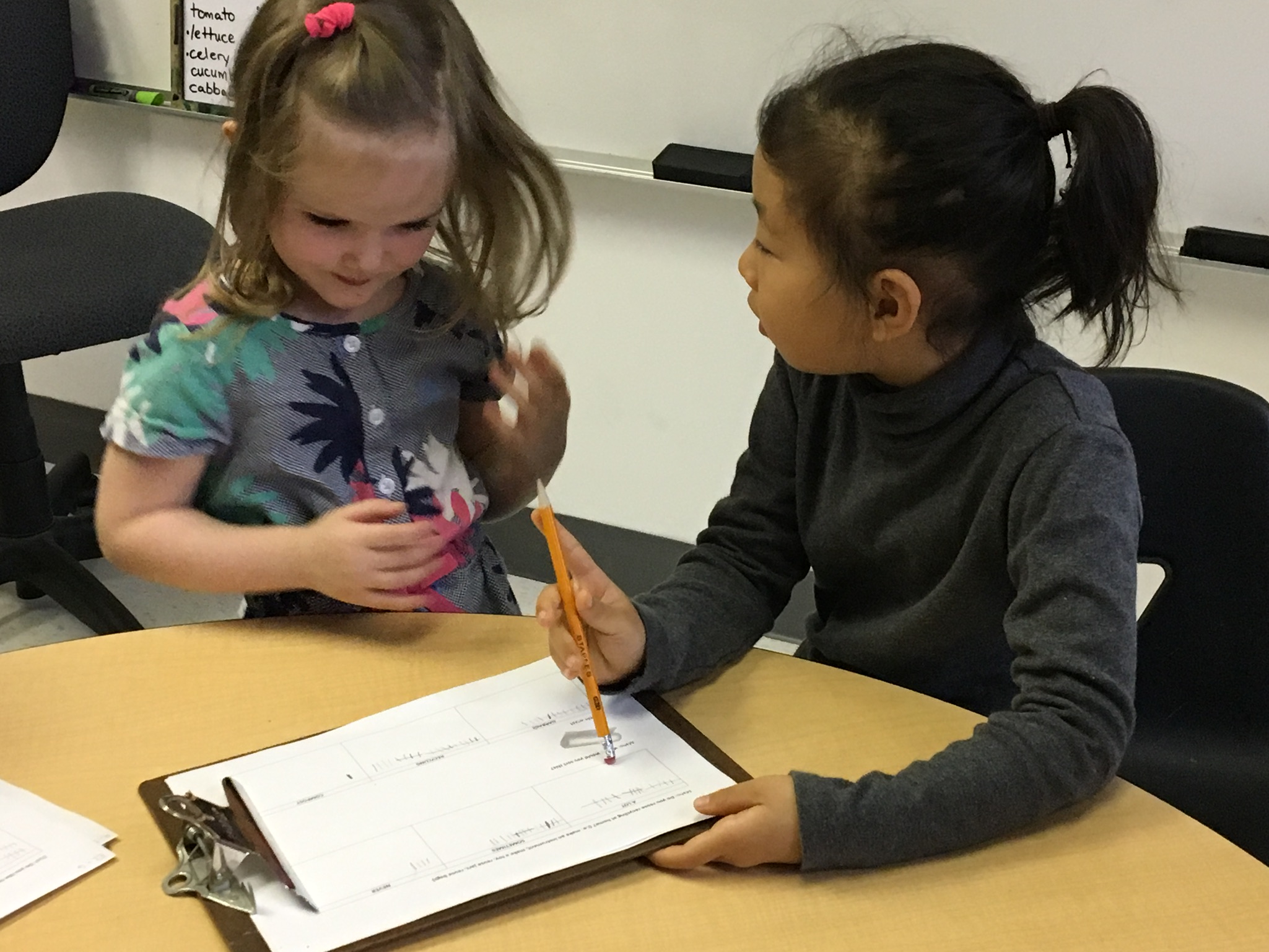 M surveys P on how often she thinks she reuses recycling for crafts or around the house. 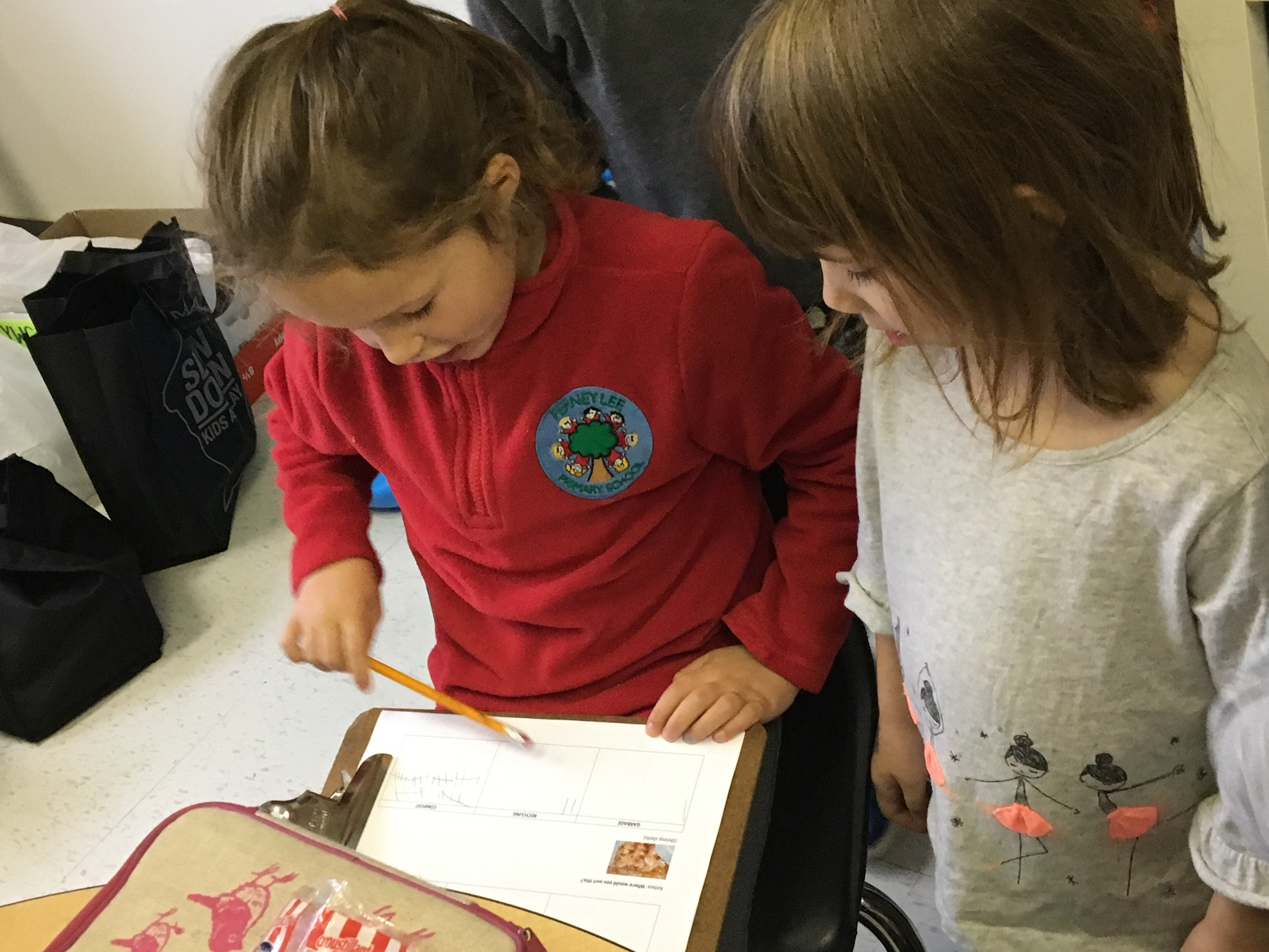 K asks A about where she would sort shrimp shells in her kitchen. A lot of the students she surveyed chose compost and K is happy it matches the waste sorting guide we have in our classroom. 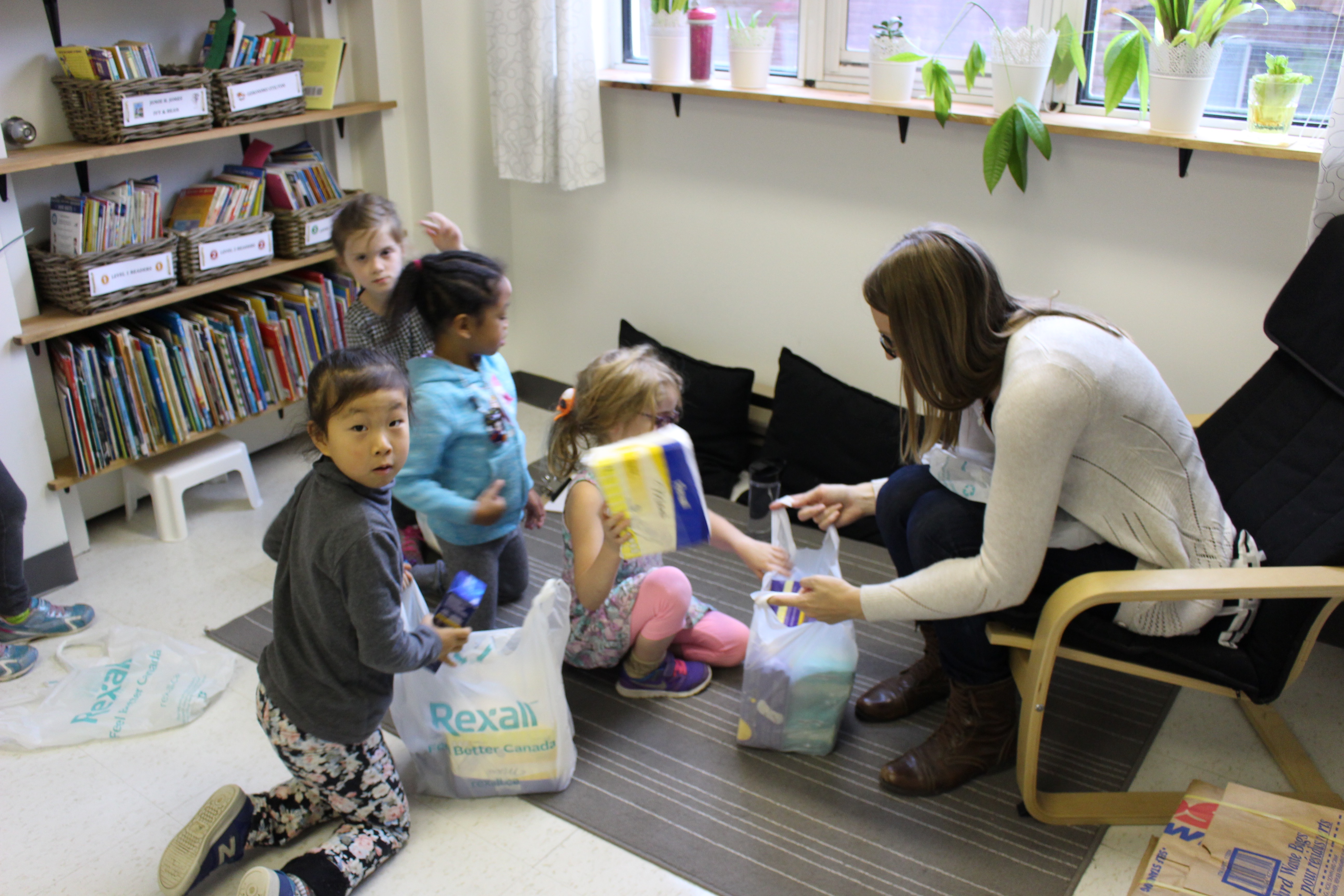 The Grade 1-2s help to sort toiletry and food donations for the YWCA shelter. They were overwhelmed by how many donations they received! 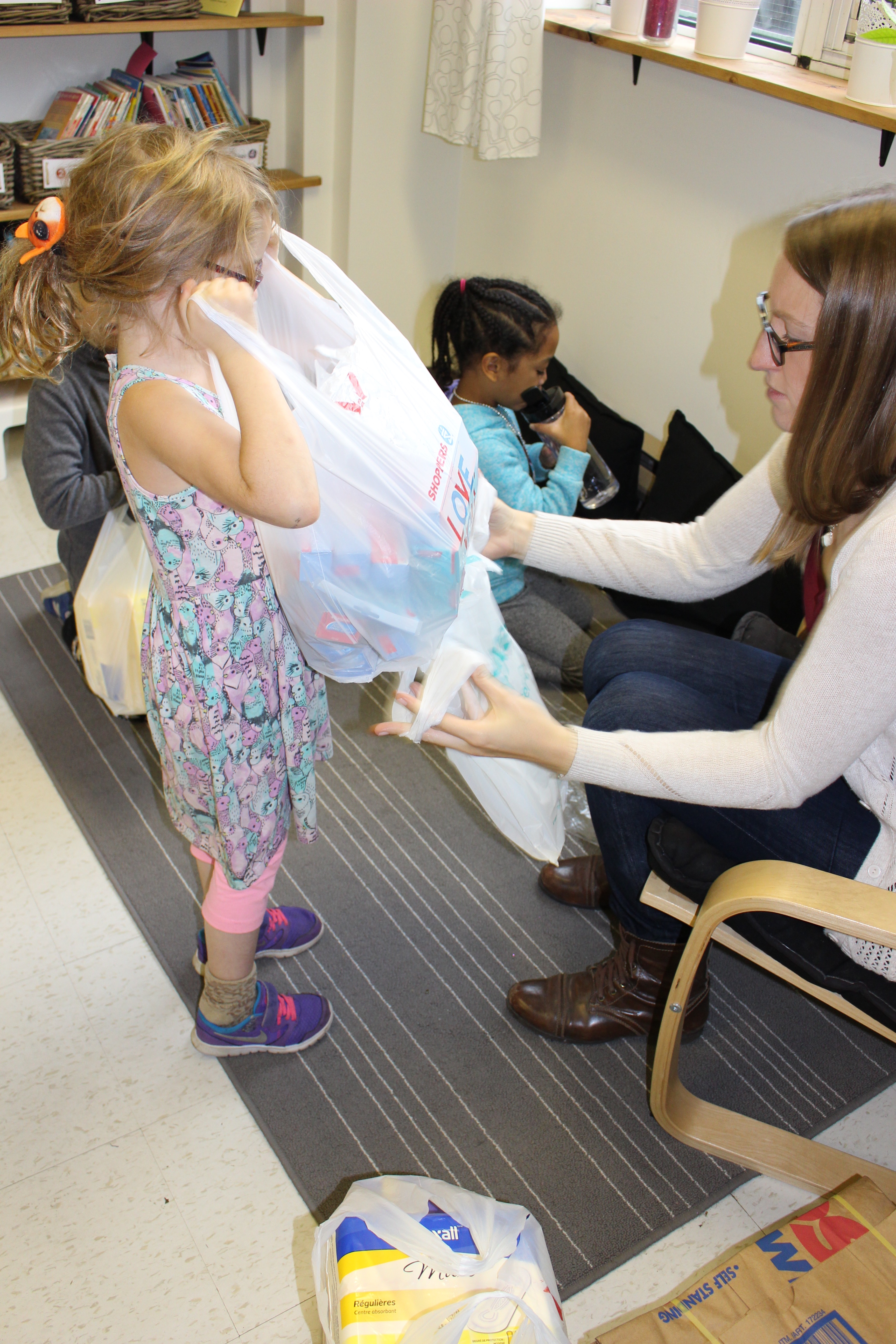 M struggles to hold the bag full of toothpaste and toothbrush donations for the YWCA shelter. The girls were so proud to have helped prepare and deliver the announcements that brought in so many donations! 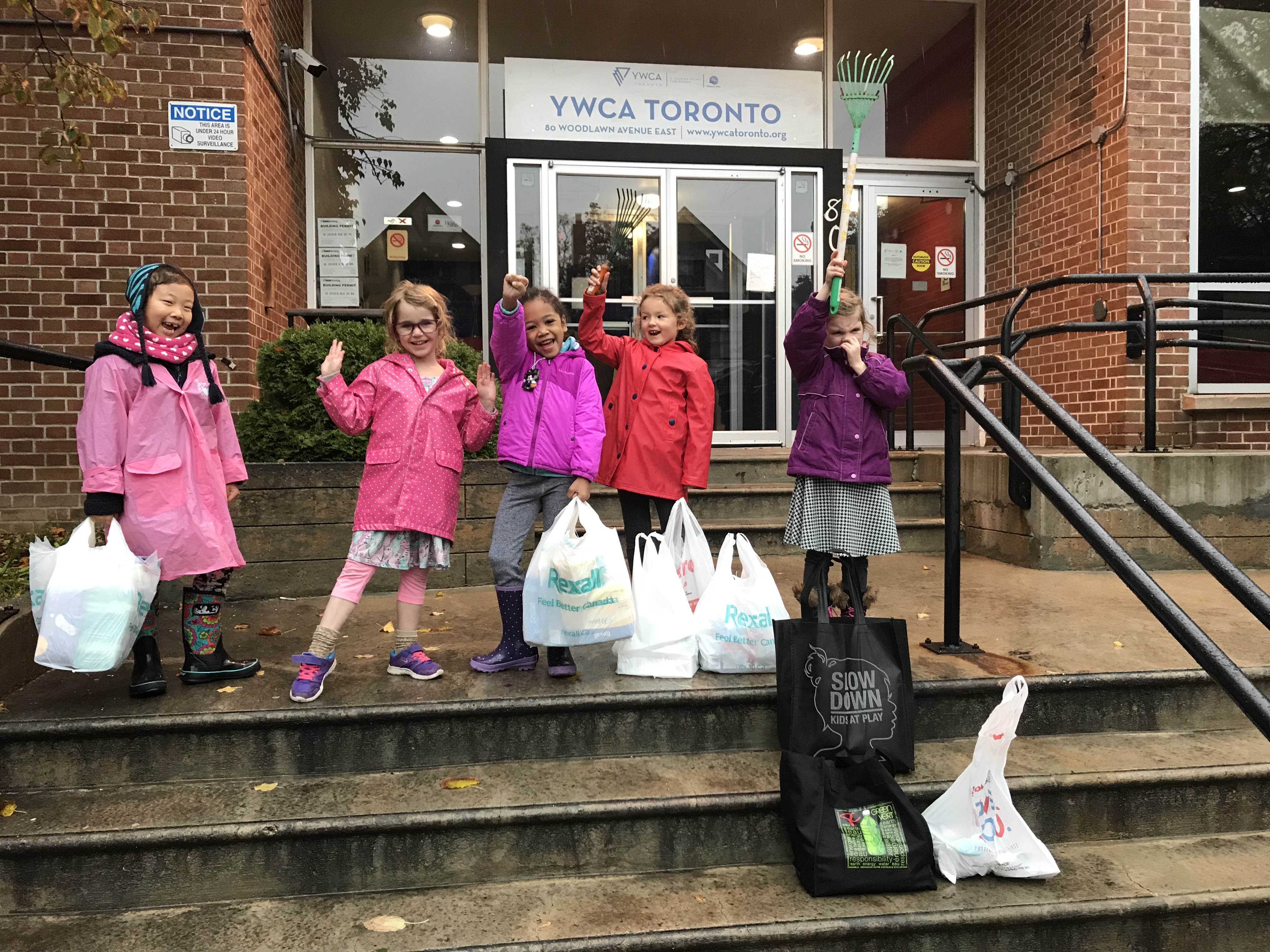 The Grade 1-2s dropped off donations of personal care items and fresh food at the 1st Stop Woodlawn Shelter. They were proud be able to help provide so many essential items to women and girls in need. 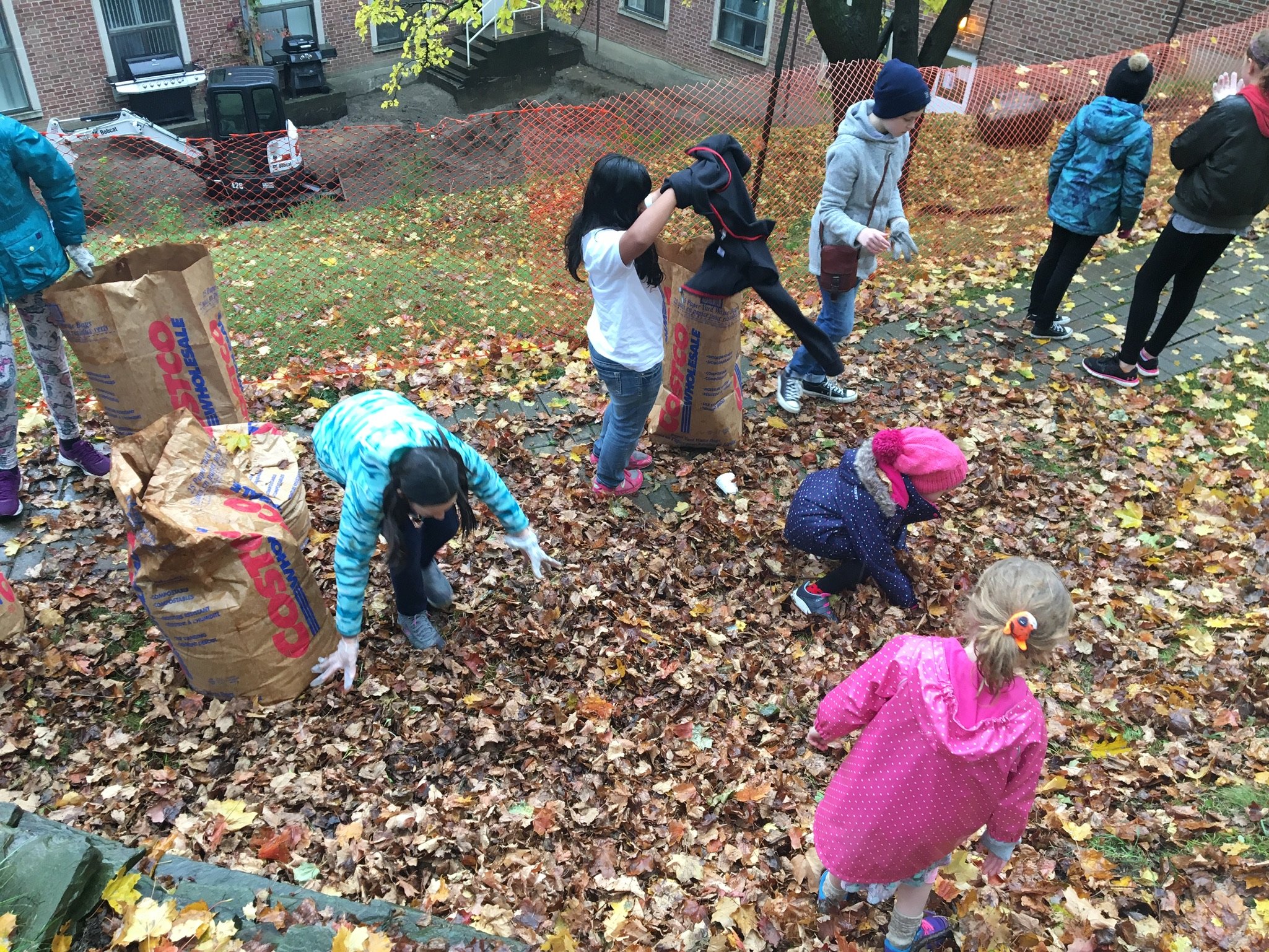 M works with students in the older grades to help pick up leaves at the YWCA 1st Stop Woodlawn Shelter. 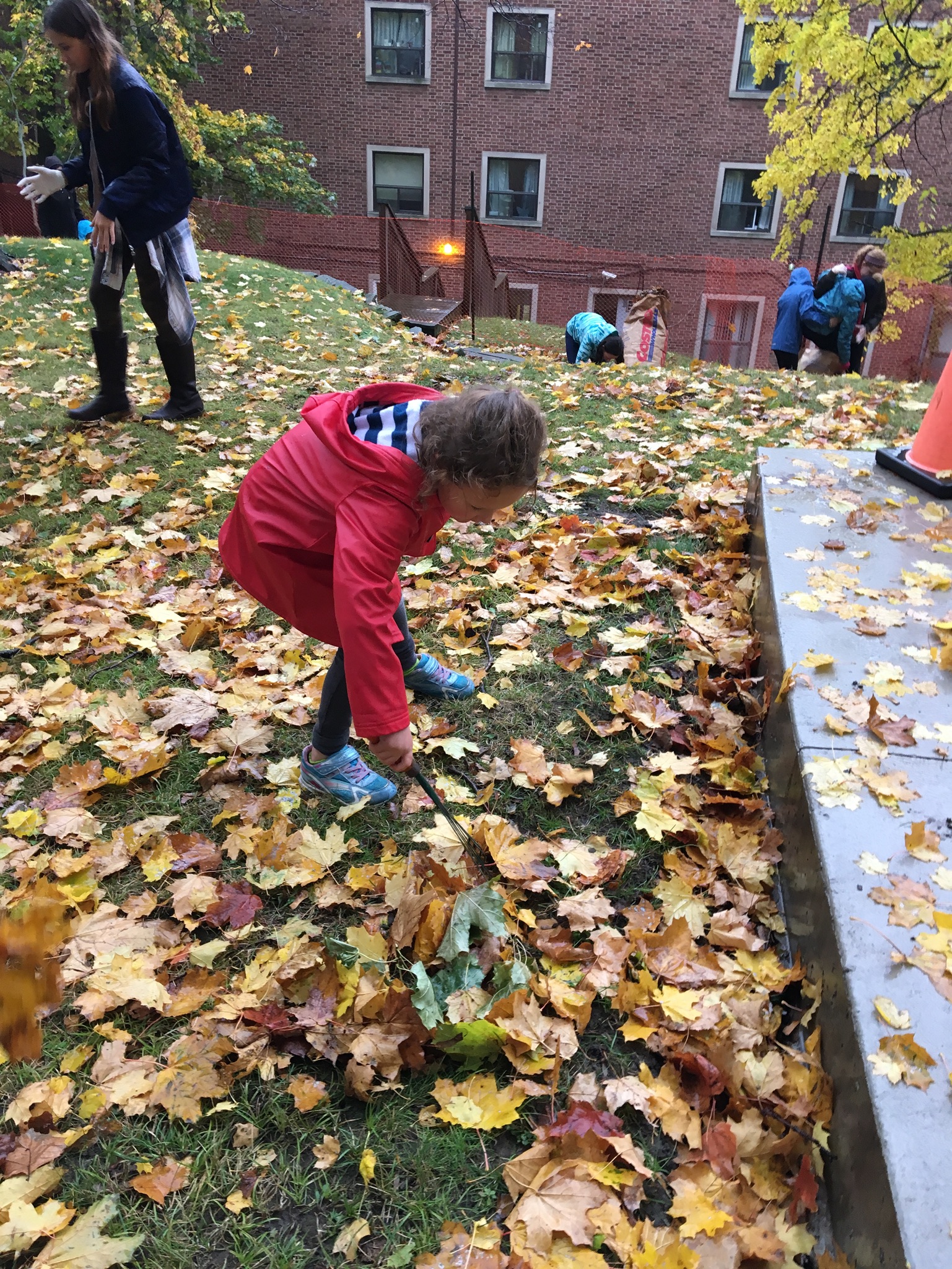 K brought in two perfectly sized rakes for the clean-up and was willing to share one with her classmates as they worked together to gather the soggy leaves in the yard of the shelter. 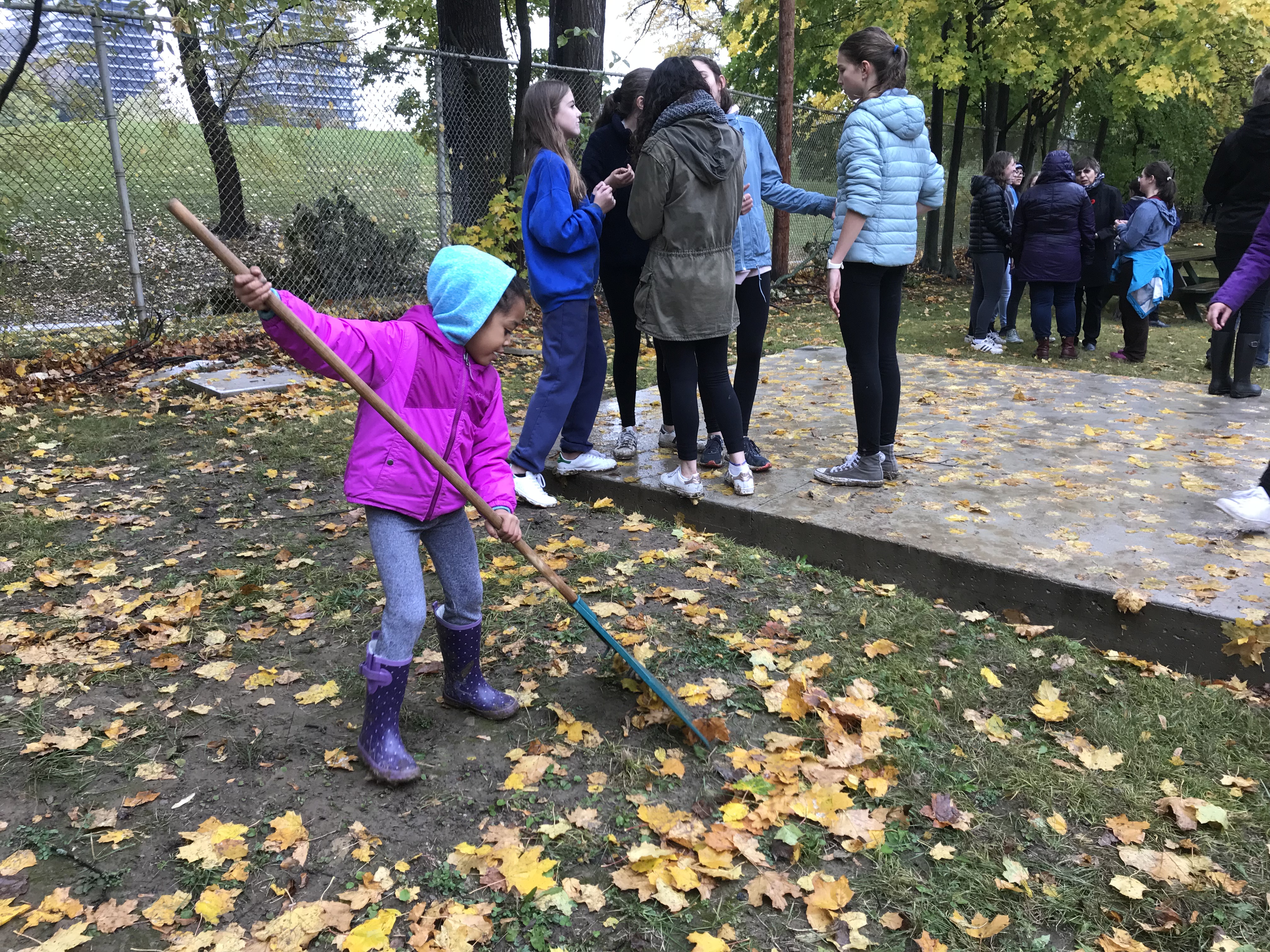 The rain and mud are no match for Z as she rakes up leaves at the YWCA shelter during our fall clean-up. 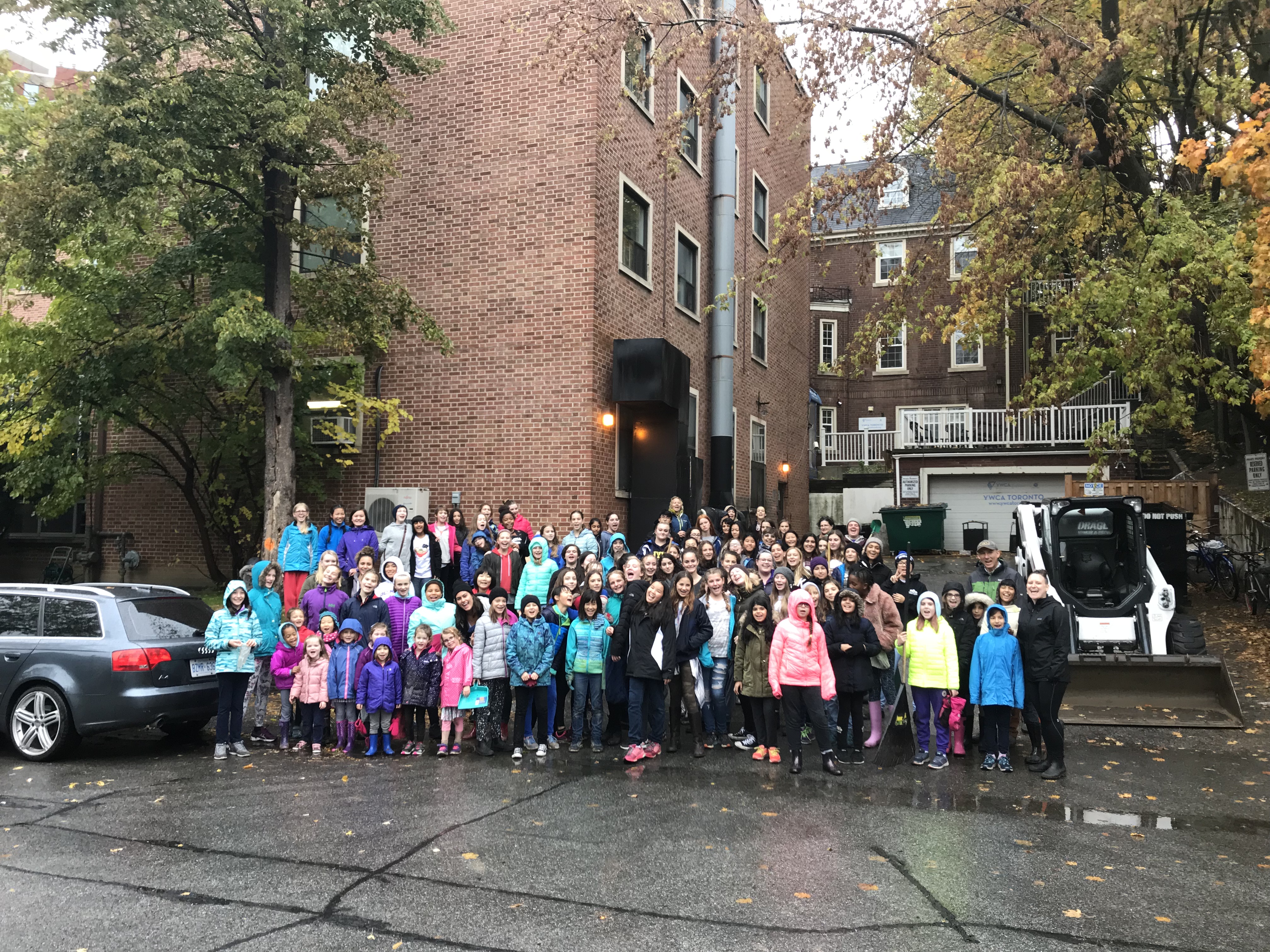 A tough crew of leaf gatherers outside the YWCA shelter at the end of our annual leaf clean-up. 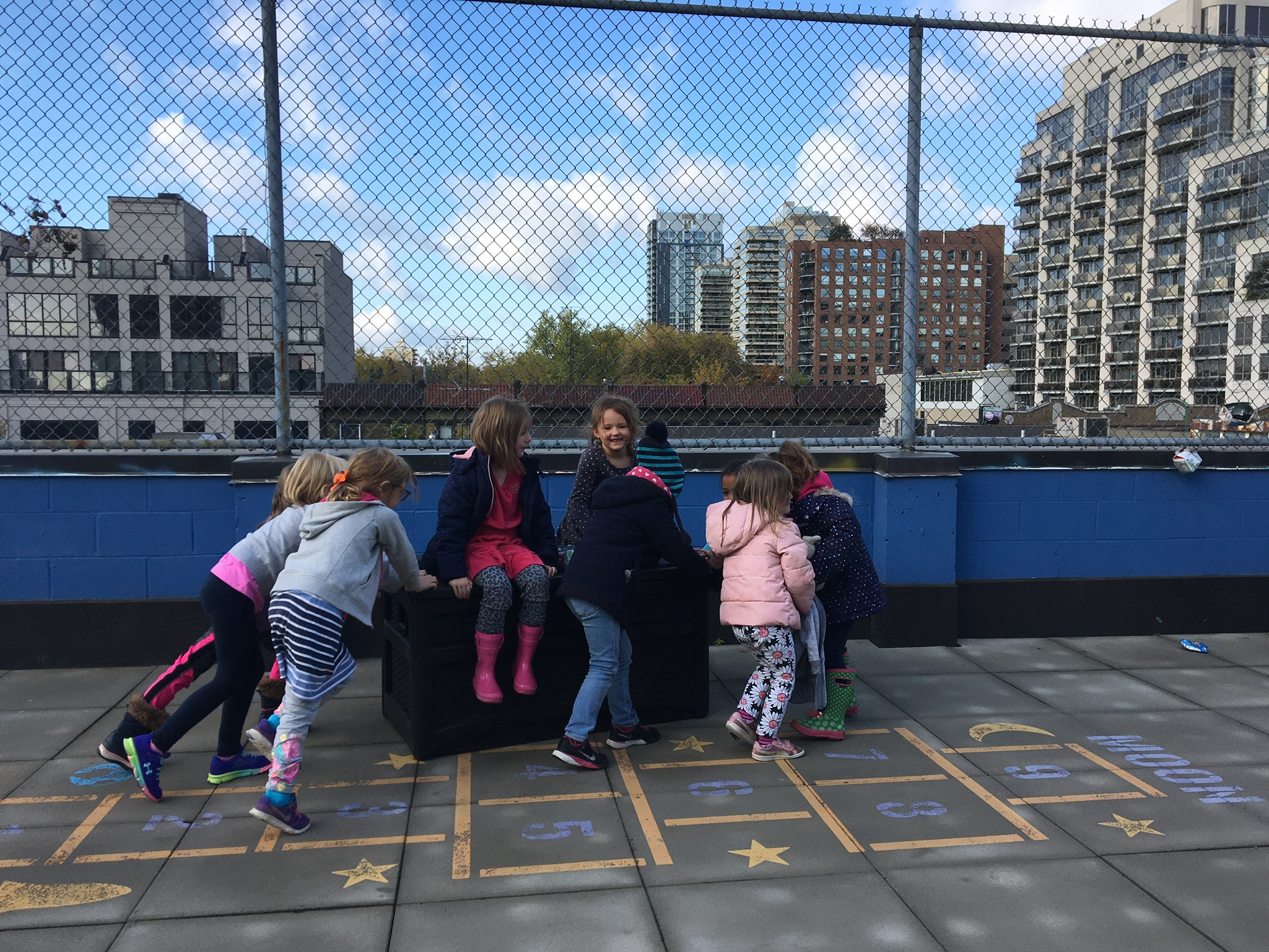 The Grade 1-2s and Early Learners discover a fun new way to play cooperatively on the roof as they give each other rides around the roof. 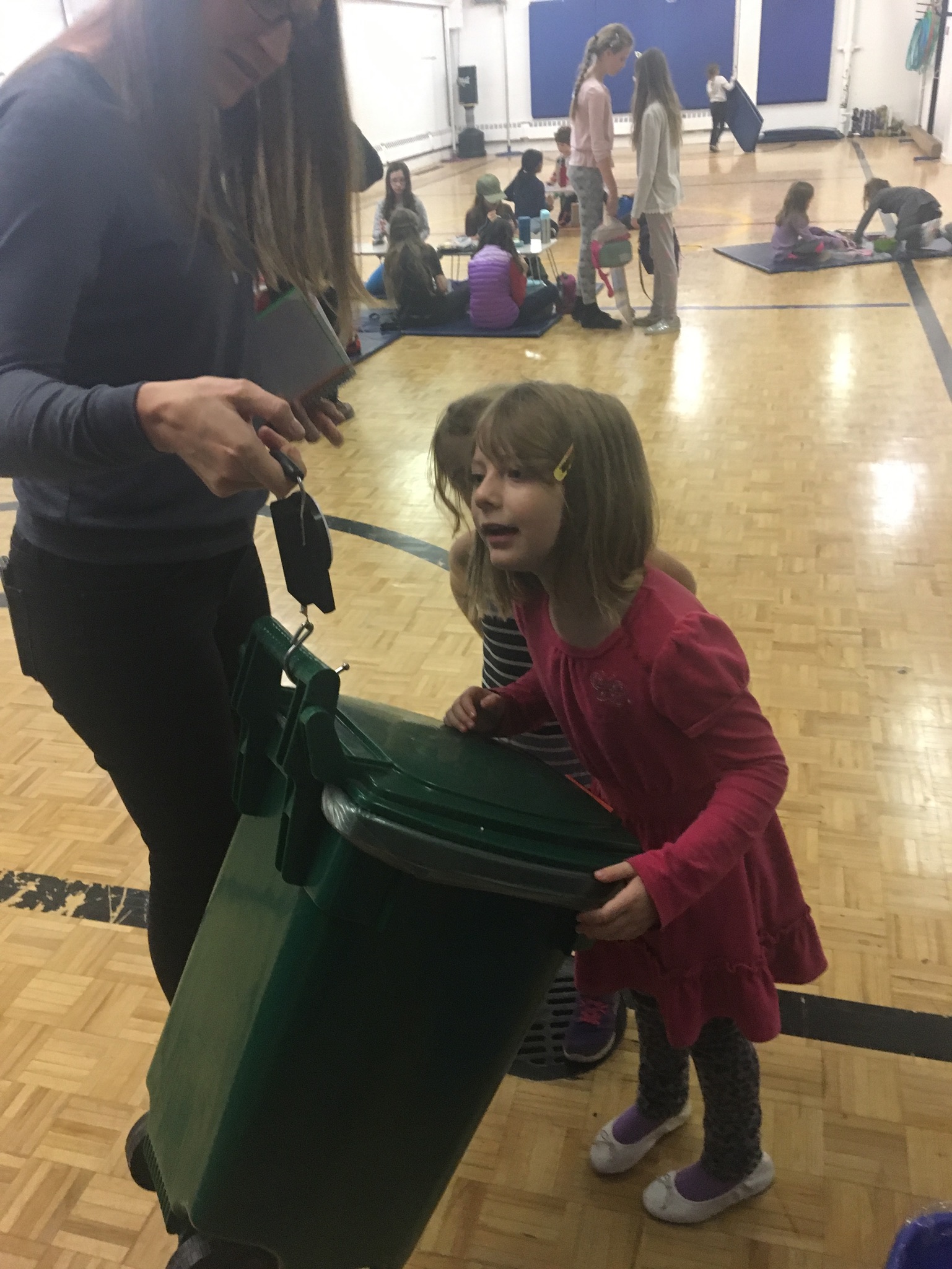 S and M weigh the different waste bins at lunch to track how much is being produced in the lunchroom.