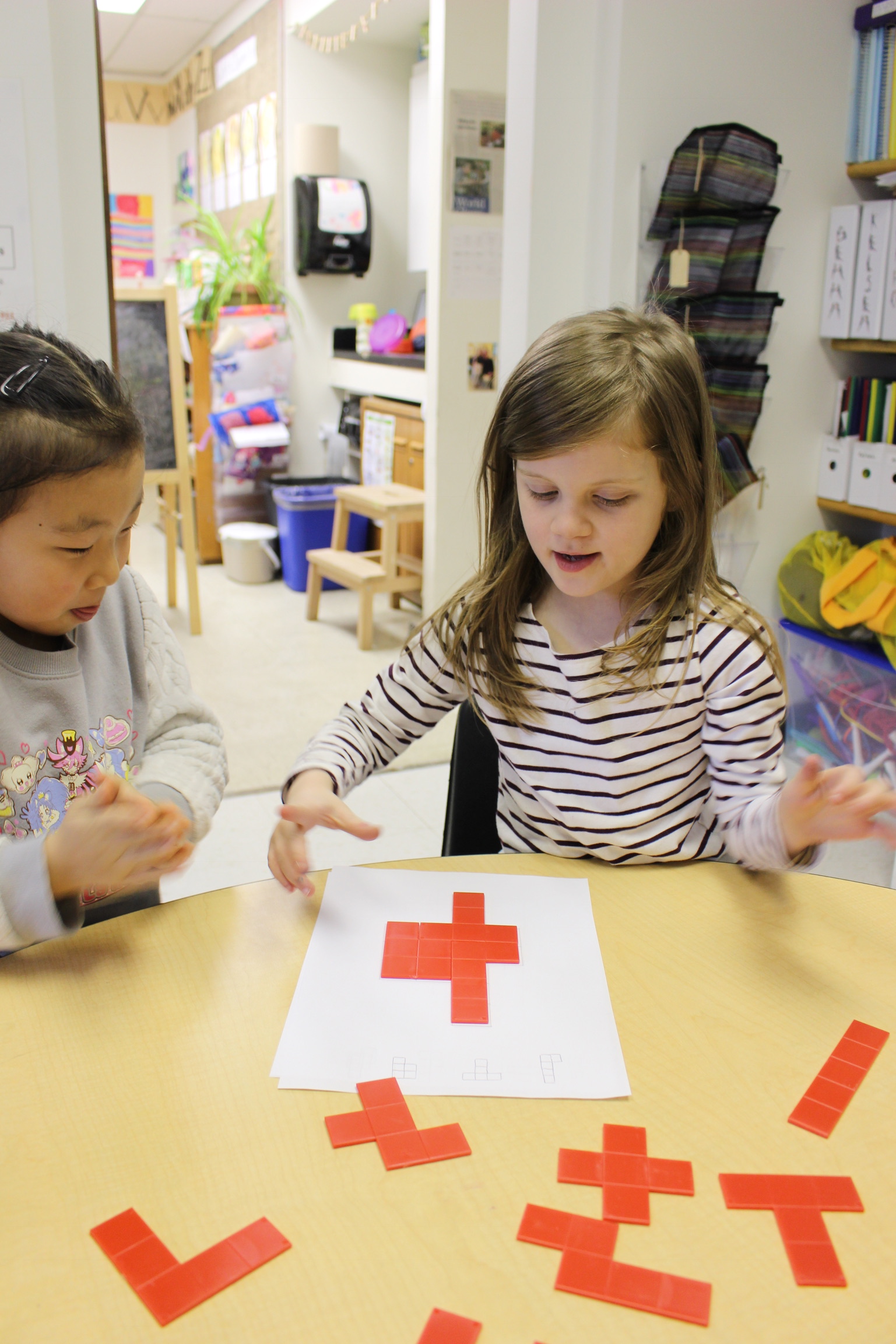 This week, our science fair preparations continued to dominate a lot of our time together in the Grade 1-2 class. The students are preparing a number of exciting projects that address scientific concepts such as absorption, friction, momentum, and energy. We also devoted some time to developing our editing skills while continuing to practice our Words Their Way word lists. Later in the week, we completed more collaborative geometry challenges with the Early Learners, with our task this week focusing on the use of pentominos. In CERES class, students explored concepts of energy while measuring sound energy on different surfaces. On Thursday, we had a very special All-School initiative. The Northern Birthday Box Project was created to help bring birthday fun and supplies to remote northern communities while relieving some of the burden on families who have to contend with inflated food prices in local grocery stores. Linden students in all grades were invited to contribute $1-$2 toward the cost of the flat-rate shipping box and birthday supplies (cake mix, icing, decorations, etc.) for a girl named Lily in Nunavut who is turning one this spring. During All-School, they learned about issues of food insecurity in the north and wrapped up the activity by making birthday cards for Lily. The Grade 1-2s were especially proud to have their Social Justice Data Fair project on food insecurity in northern Canada referenced on a number of occasions throughout the All-School. And of course, a winter week is never complete without a lot of outdoor play. We were grateful for the continuing snow this week which fostered a lot of creative outdoor building and exploration. 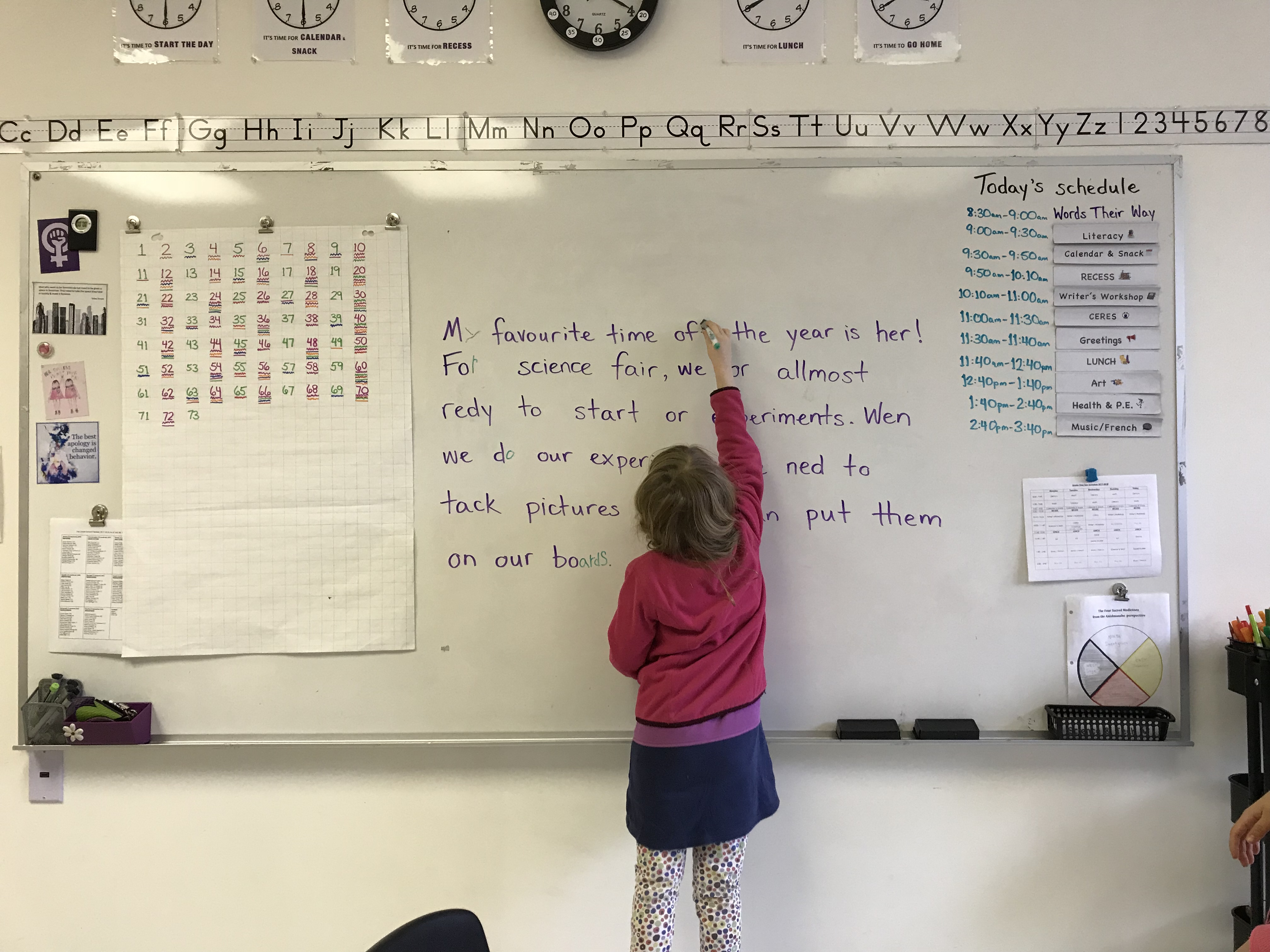 M works with her friends to help correct (intentionally made) spelling mistakes in a piece of writing on the board. This exercise helps strengthen skills for peer editing and self-correcting writing. 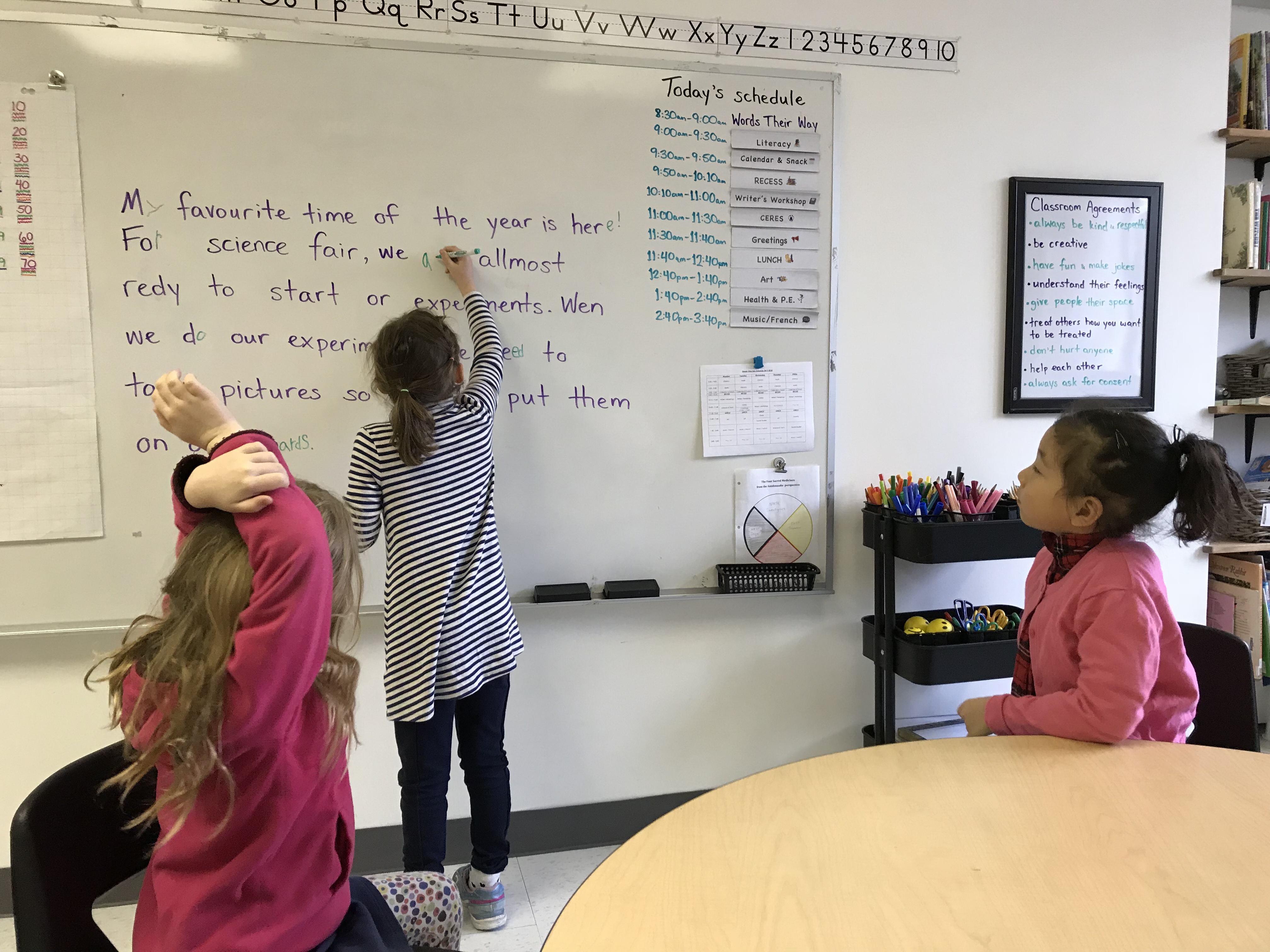 When selecting the word she wants to correct, K likes to opt for words that need to be rewritten so that she can use the whiteboard marker "like a teacher". 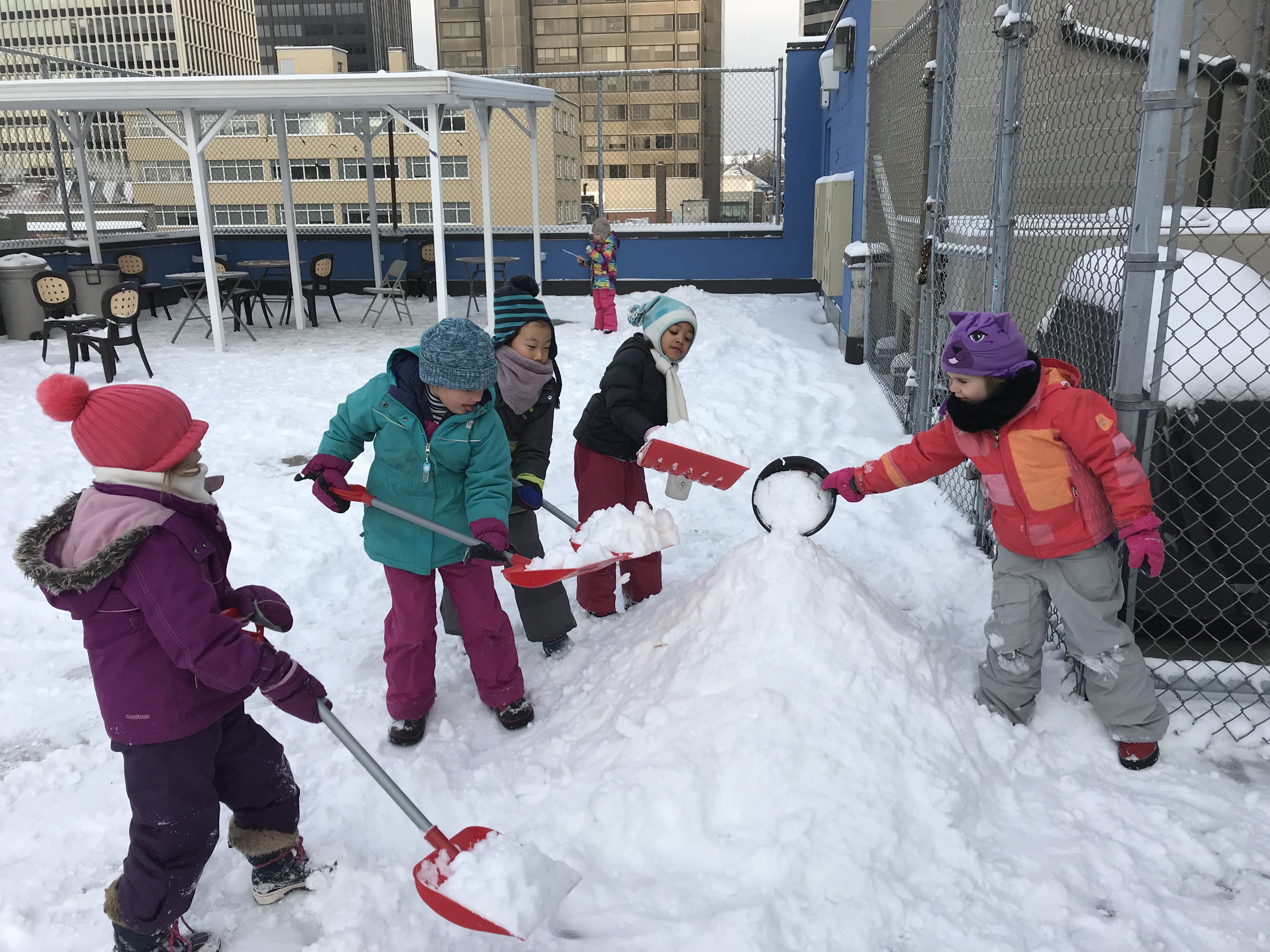 The Grade 1-2s work together to repair a snow sculpture they've been working on. Later in the week, this hill transformed into a nest for "snow bunny eggs" (ball of ice) through the power of imagination. 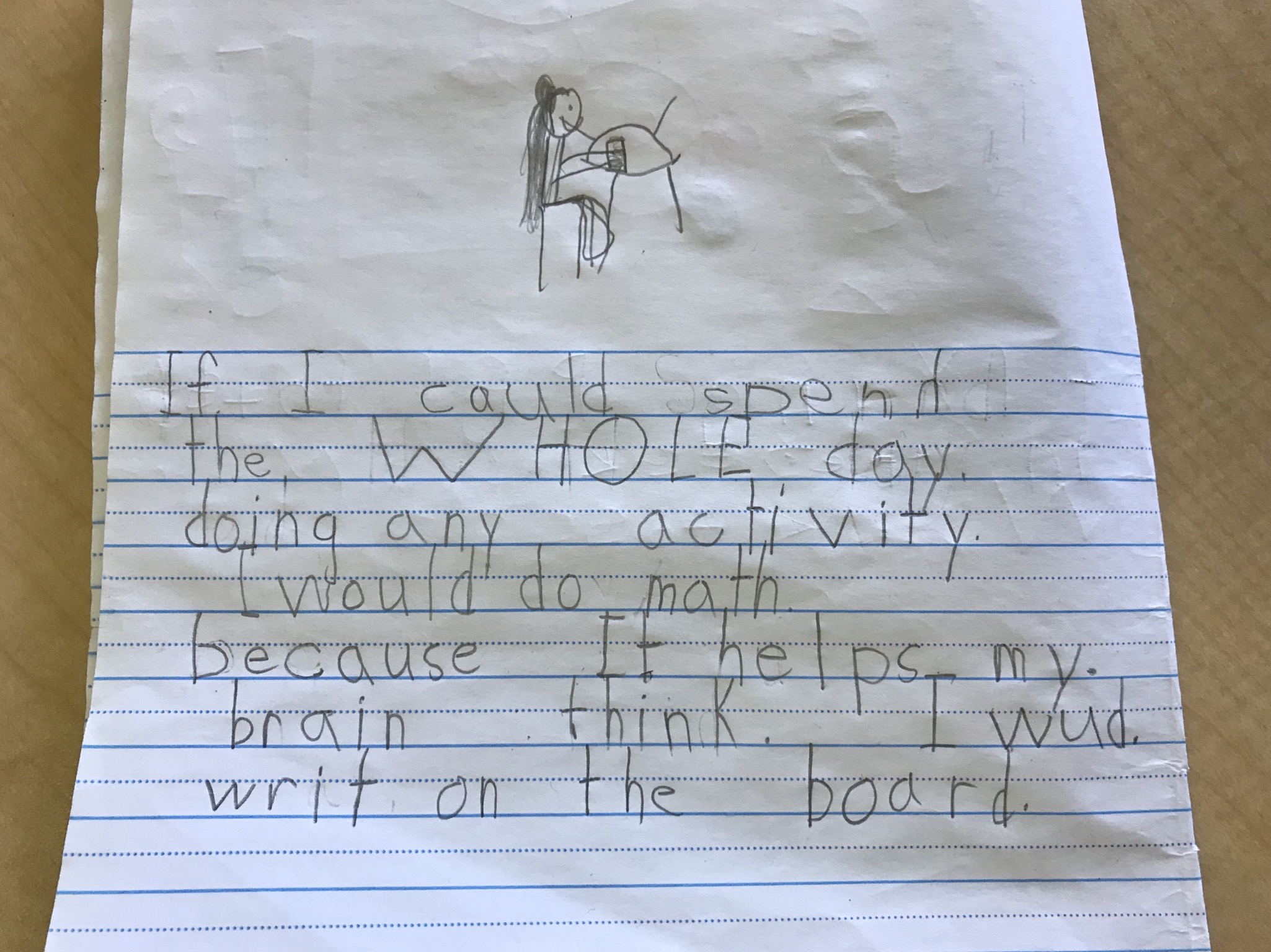 We know we're doing something right when our students write about how they'd choose to spend the whole day doing math over anything else. 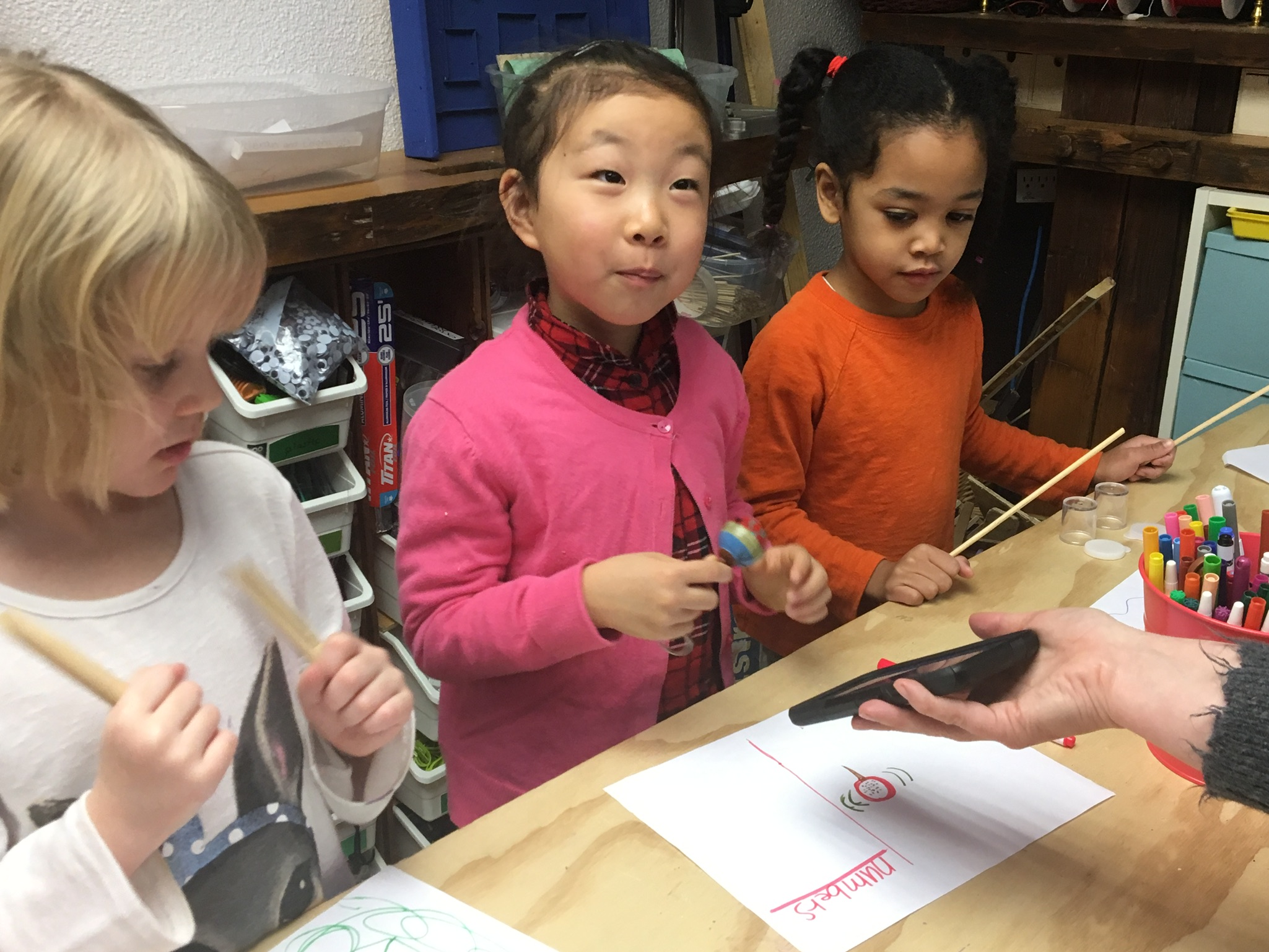 After drawing what she thinks the sound would look like, M shakes a maraca to test the decibel level in CERES class. 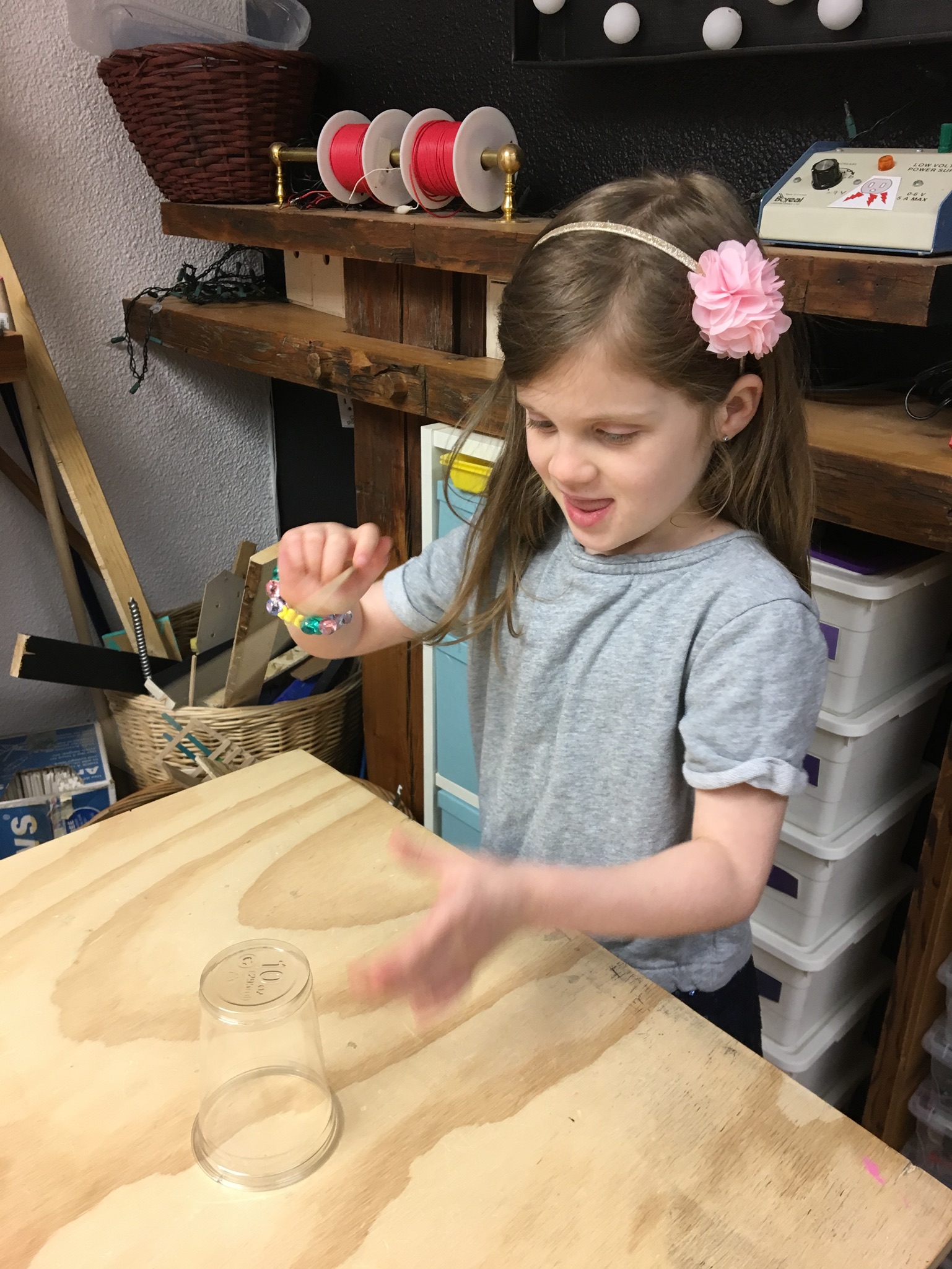 G drums on a plastic cup with a skewer to create a different sound in her CERES inquiry. This is part of the class's study of energy. 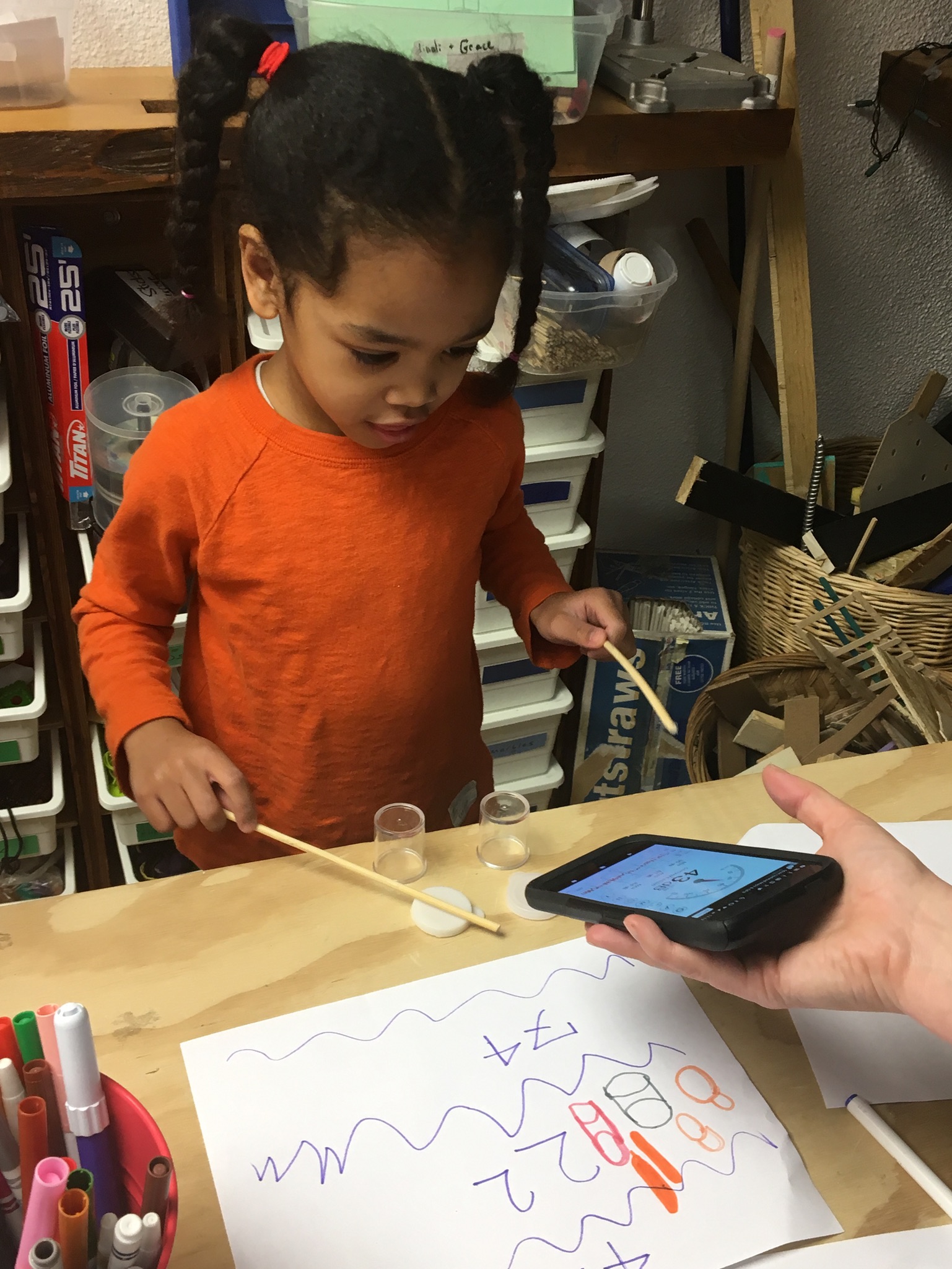 Z had a number of predictions for what the decibel level will be when she drums on the containers. She discovers that the measurement fall in between many of her predictions. 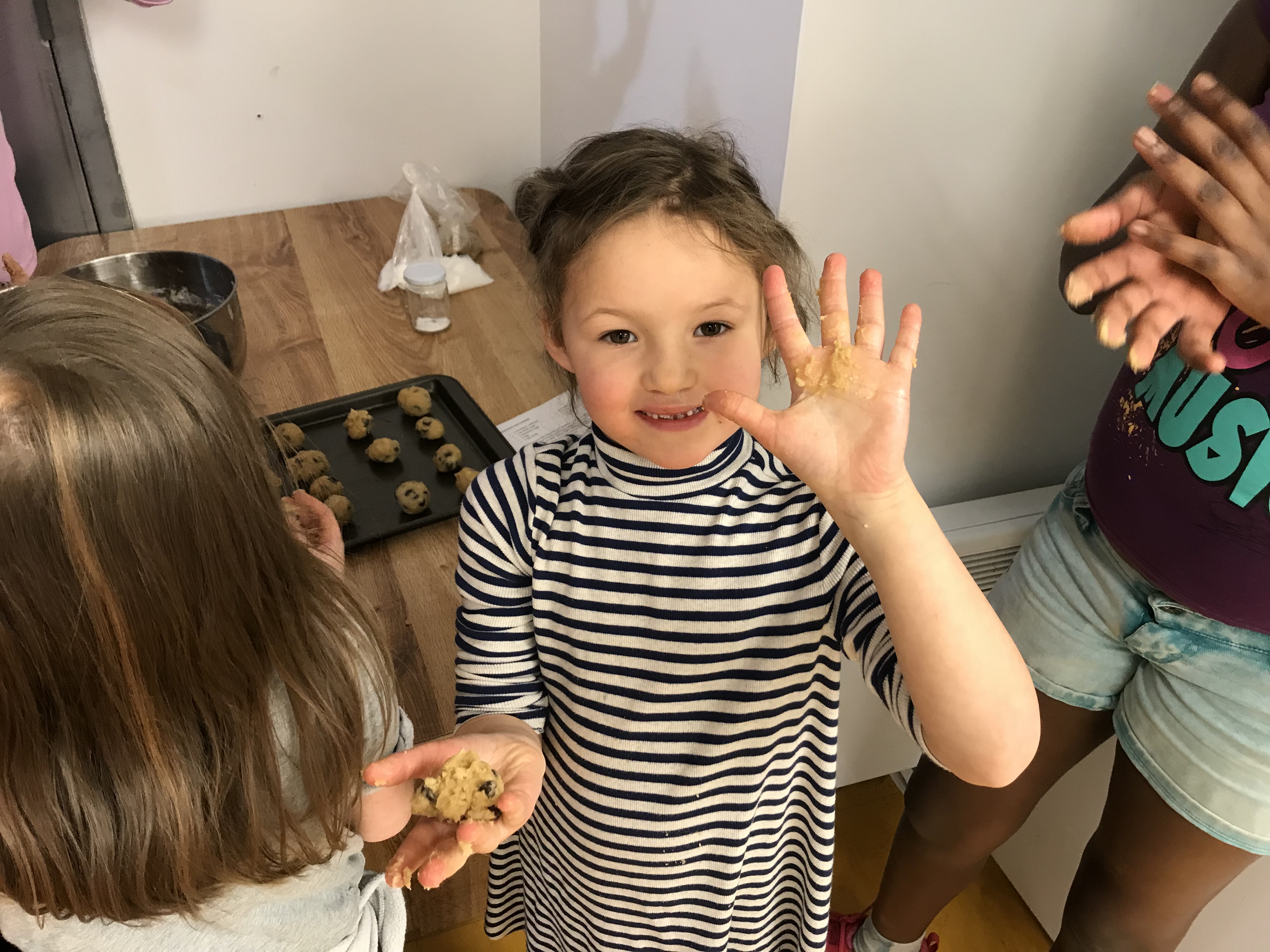 K had a fabulous time rolling chocolate chip cookies in Cooking Club this week. It was hard for everyone to resist eating the dough but it was a great opportunity to learn some important facts about food safety. 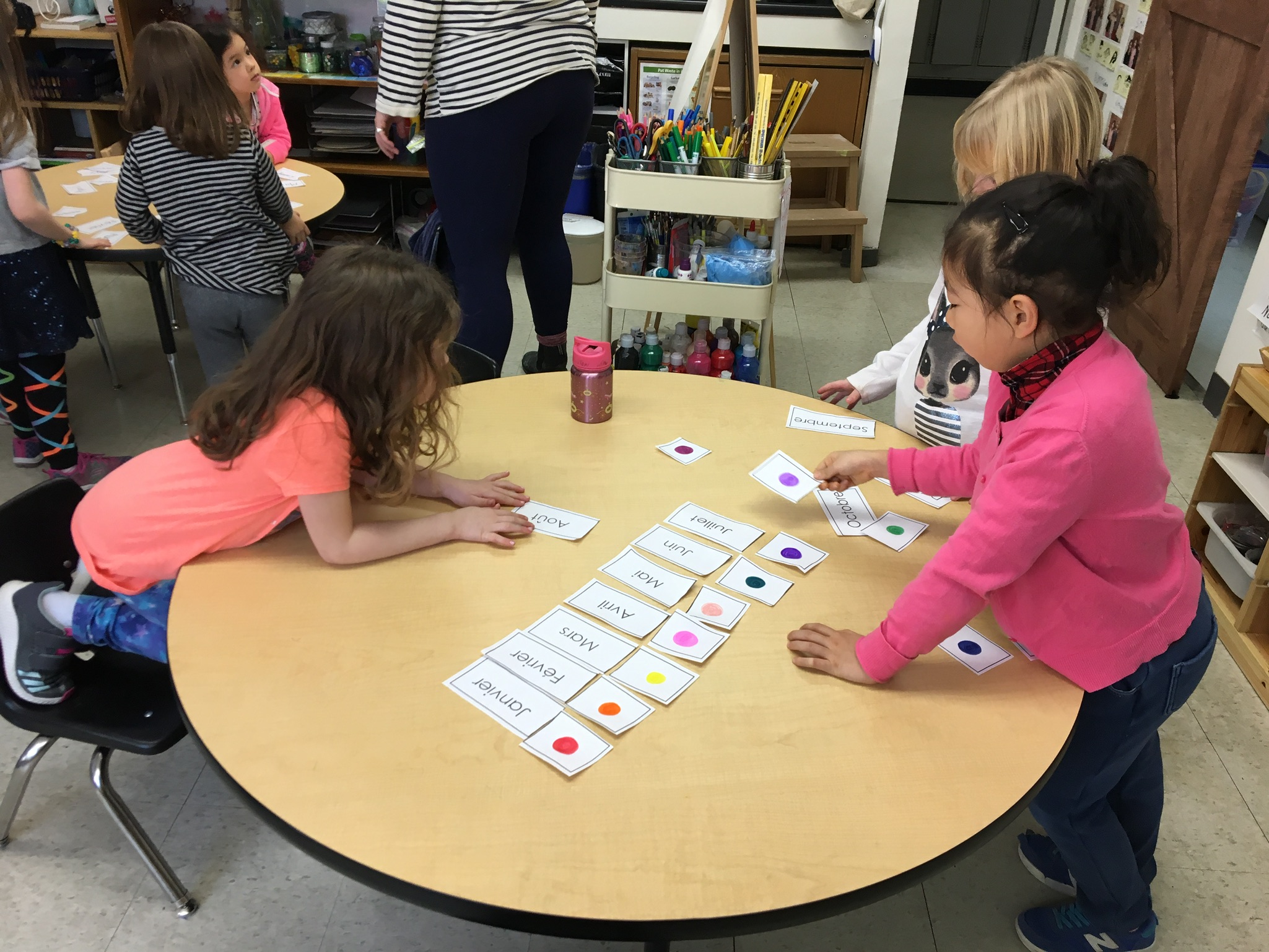 M works with K and G to arrange the months in chronological order during French class. 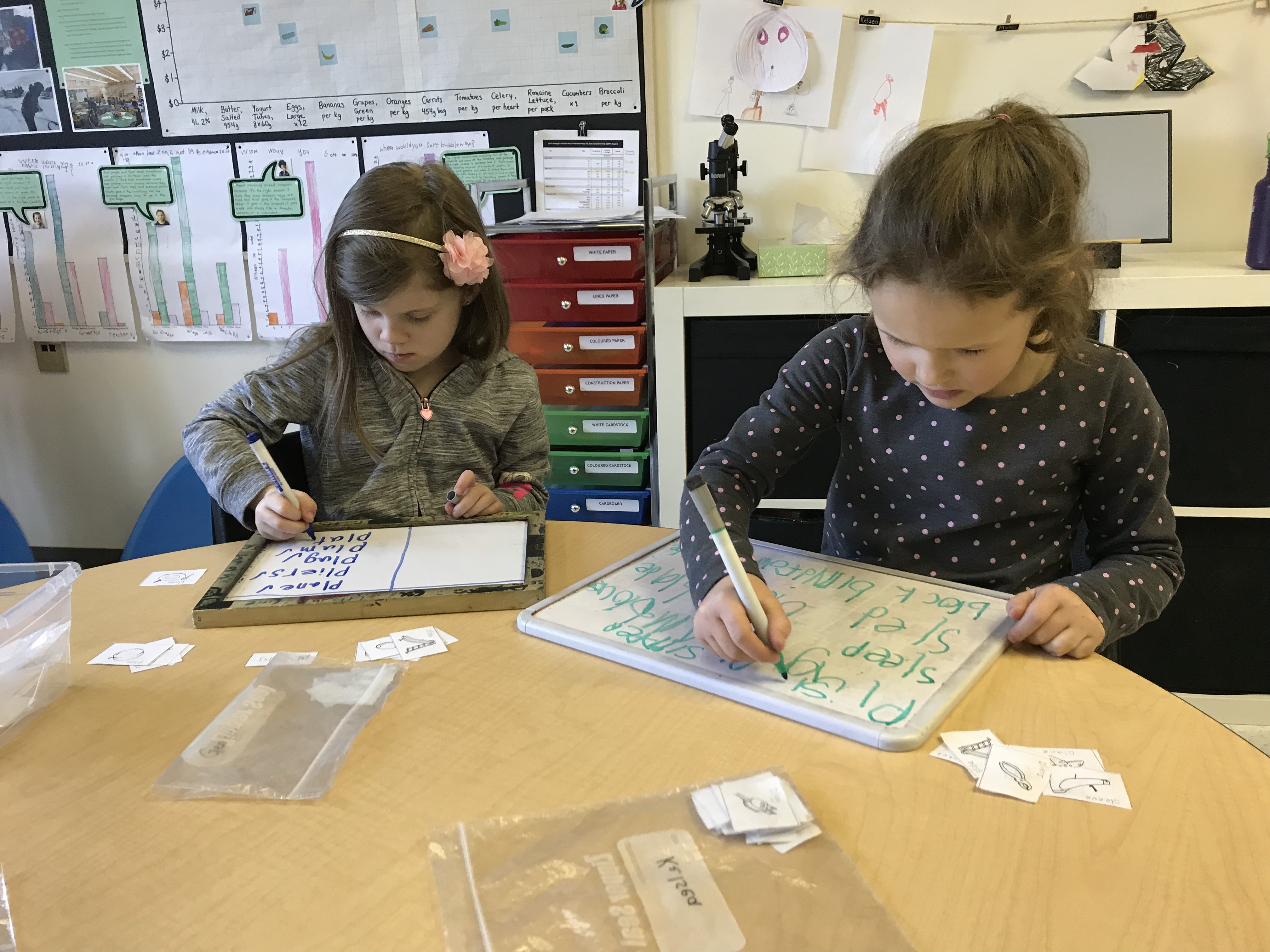 G and K practice writing their Words Their Way spelling words on whiteboards. G enjoys re-reading her words to confirm that she has spelled them correctly and then adding a checkmark to each one. 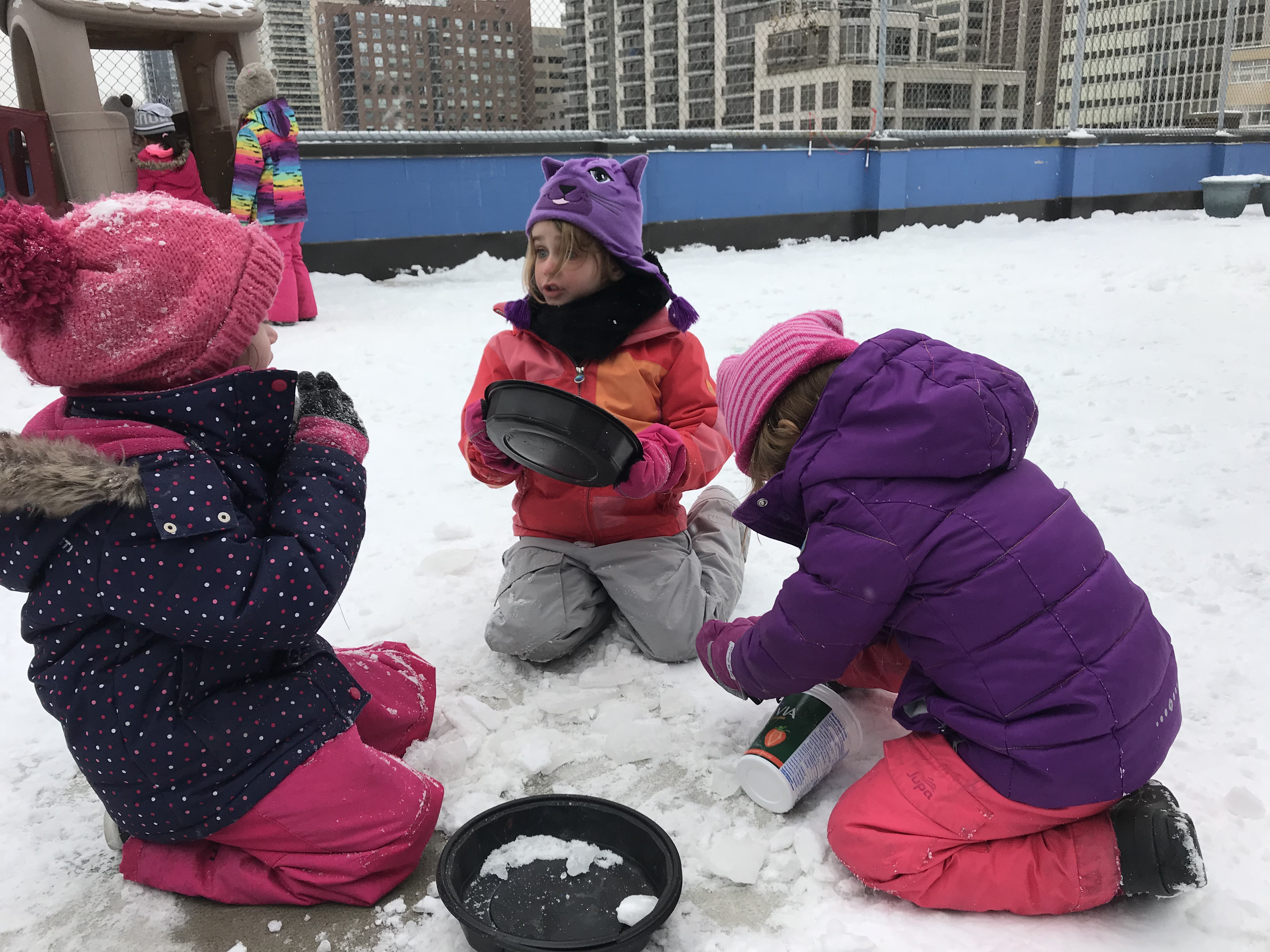 M is very animated as she tells K about the "snow bunny eggs" starting to hatch. 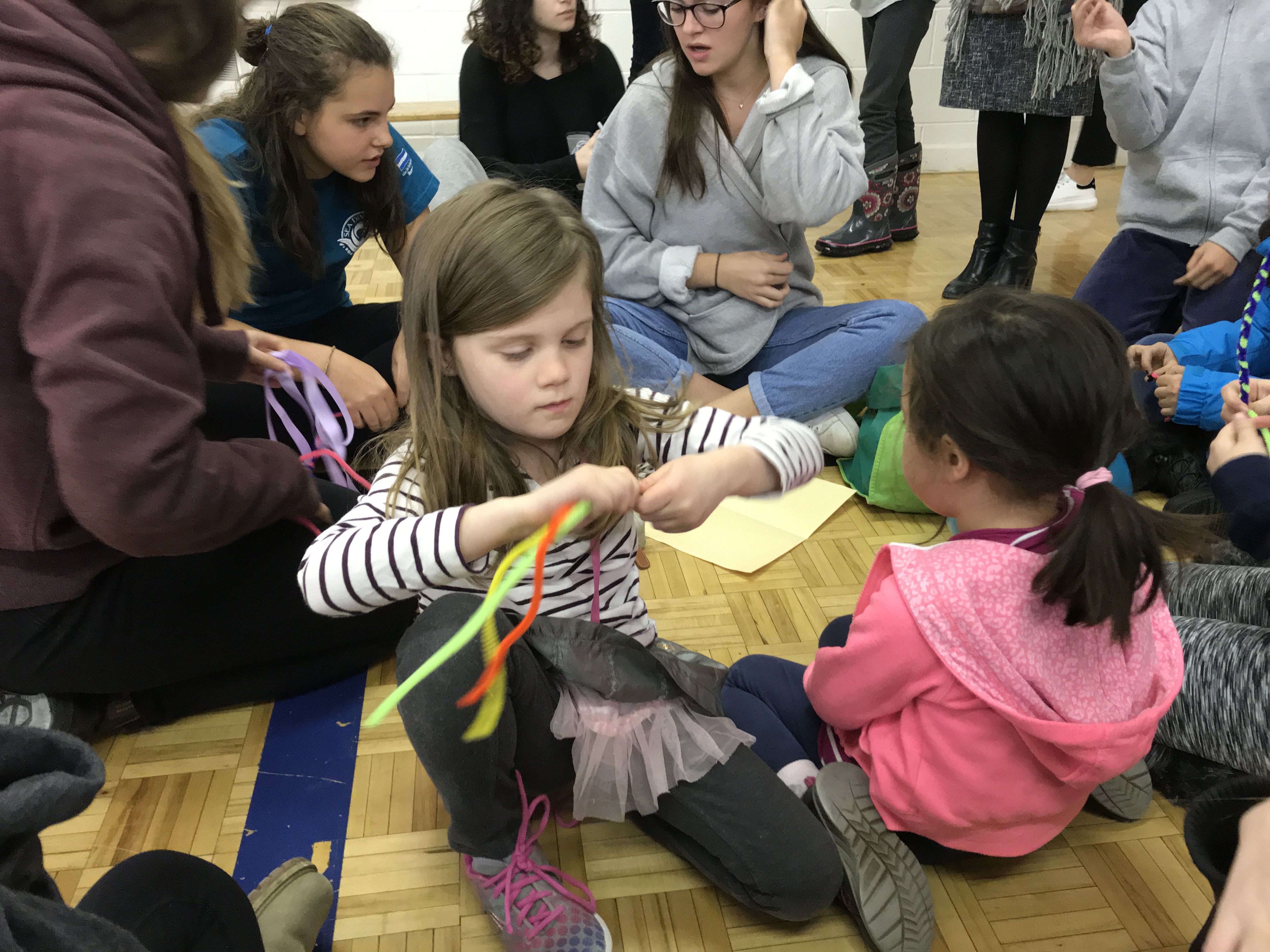 G uses pipe cleaners to create a birthday decoration for Lily to send in our box for the Northern Birthday Box project during All-School. 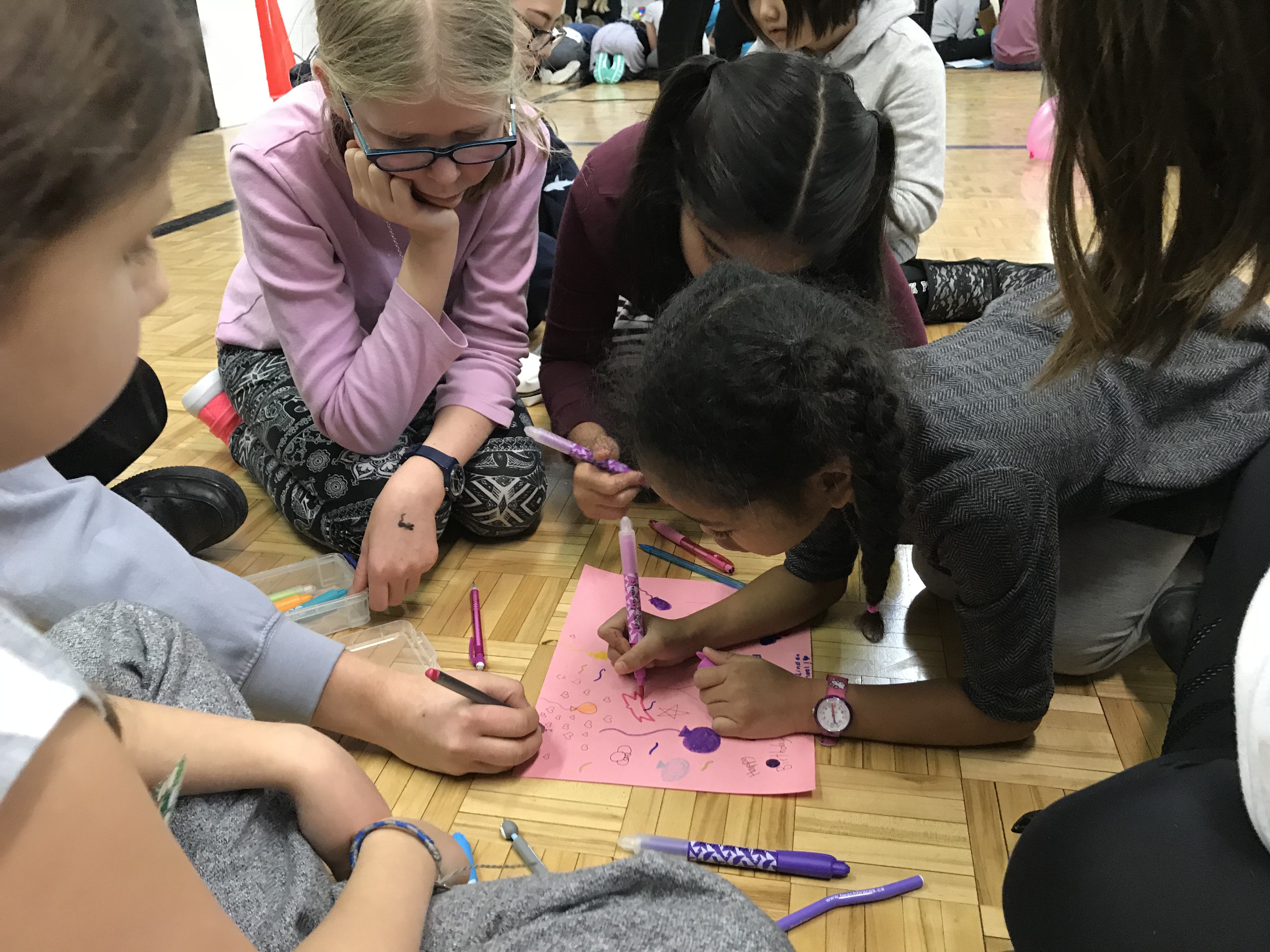 Z works with members of her Linden family to create a beautiful birthday card for Lily during the Northern Birthday Box Project All-School. 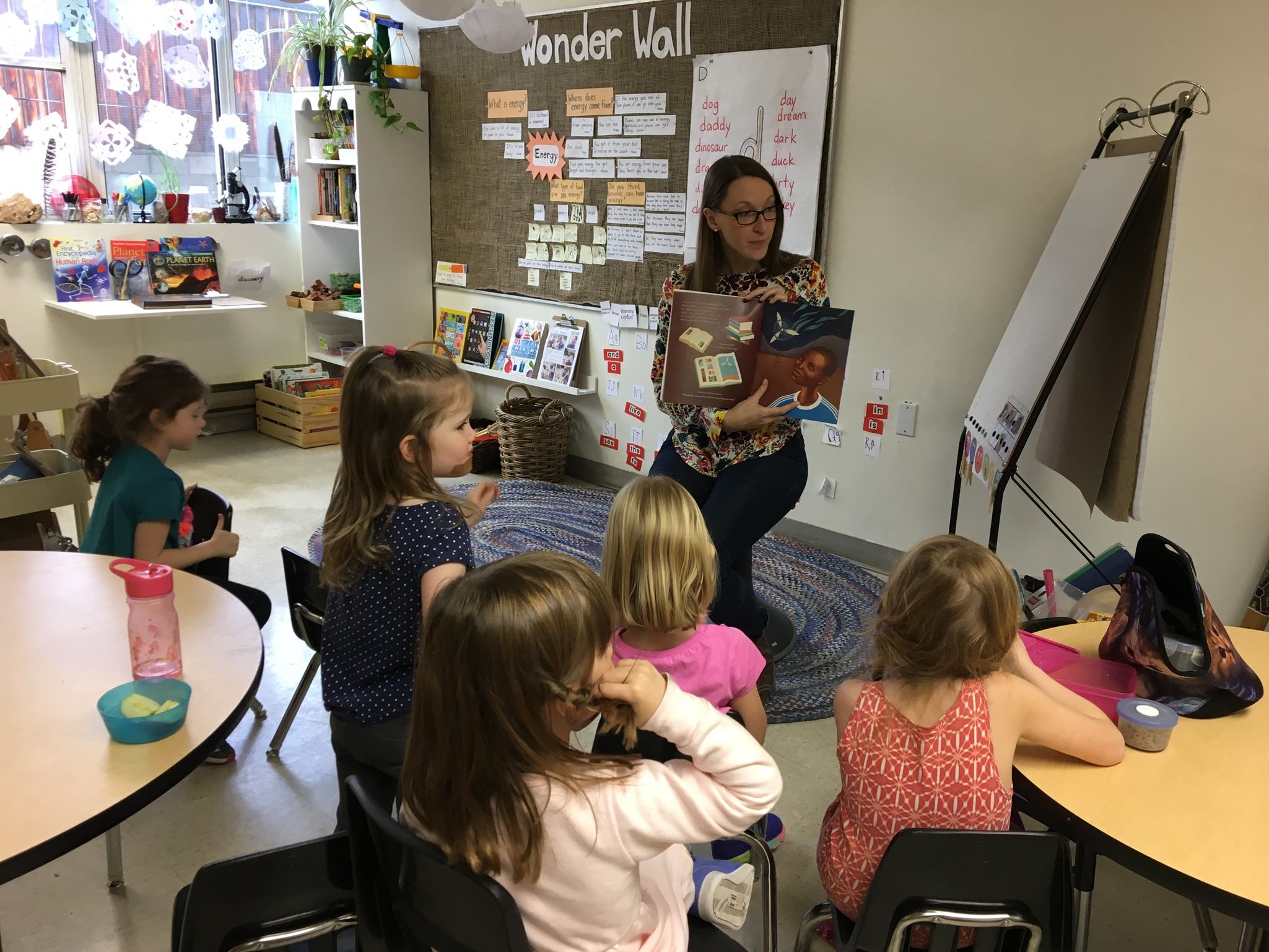 The Grade 1-2s and Early Learners enjoyed identifying reasons how William Kamkwamba fit the profile of an engineer while listening to a read aloud of The Boy Who Harnessed The Wind. The book tells the true story of William, a Malawian boy who was a self-taught engineer and who constructed a wind turbine to generate electricity for his home and then later, for his village. 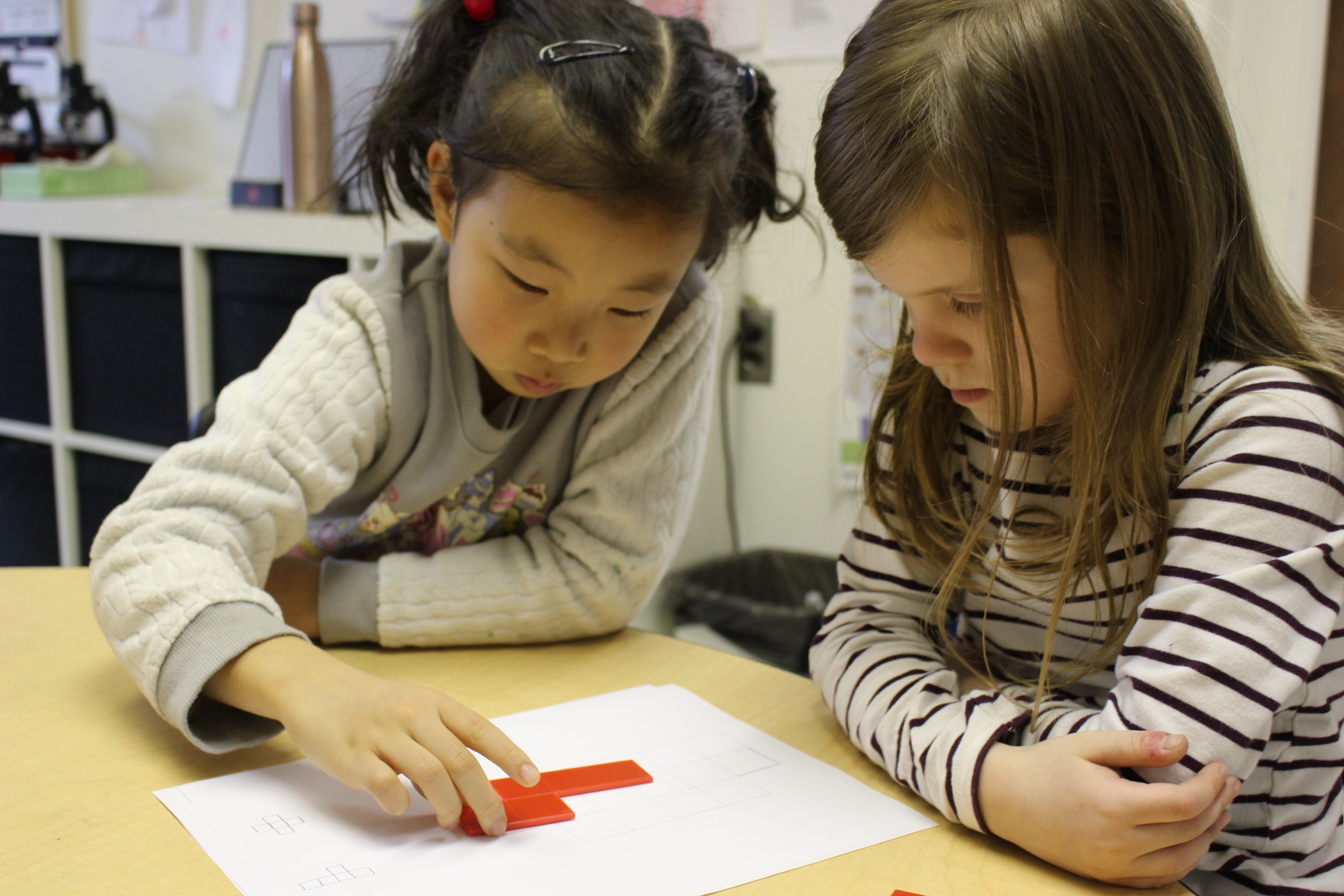 M and G worked together to rotate and flip a set of pentominos to fit an outline during a geometry challenge in math class. 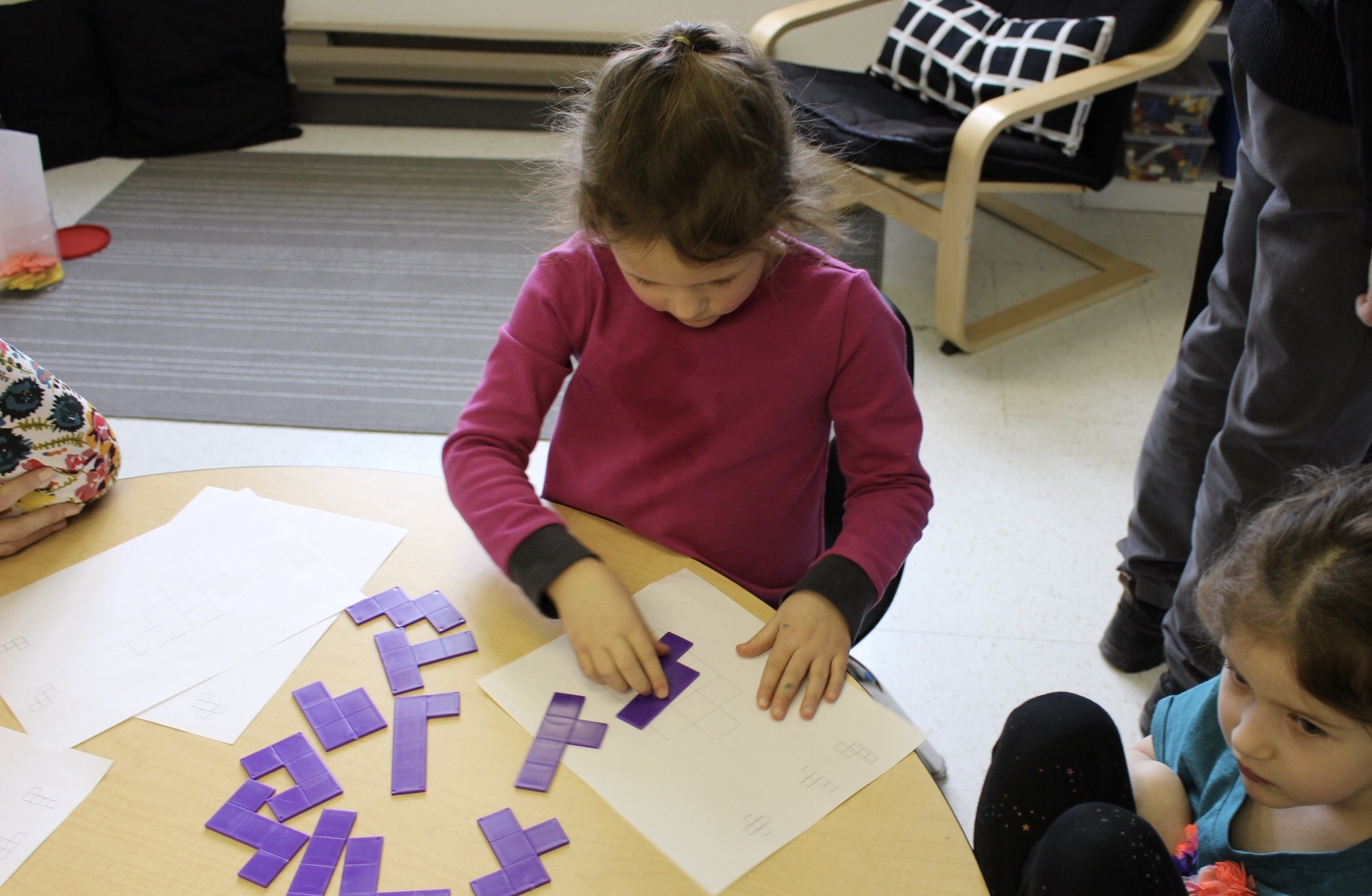 K demonstrated a lot of perseverance in finding how her pentominos would fit together to fill the outline exactly. 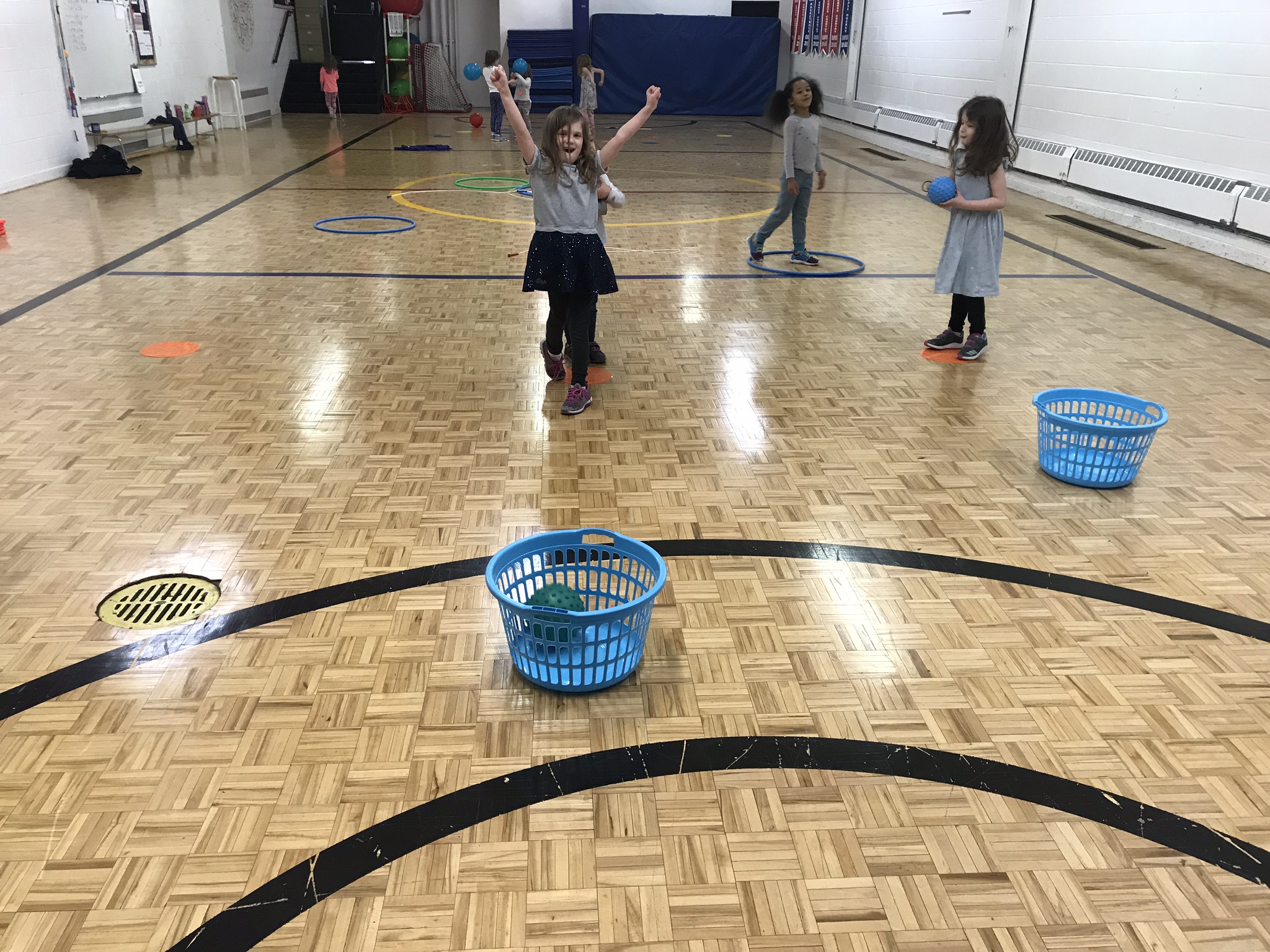 G celebrates getting a basket during phys. ed. centres. Each centre works on a different skill such as ball handling or balance. 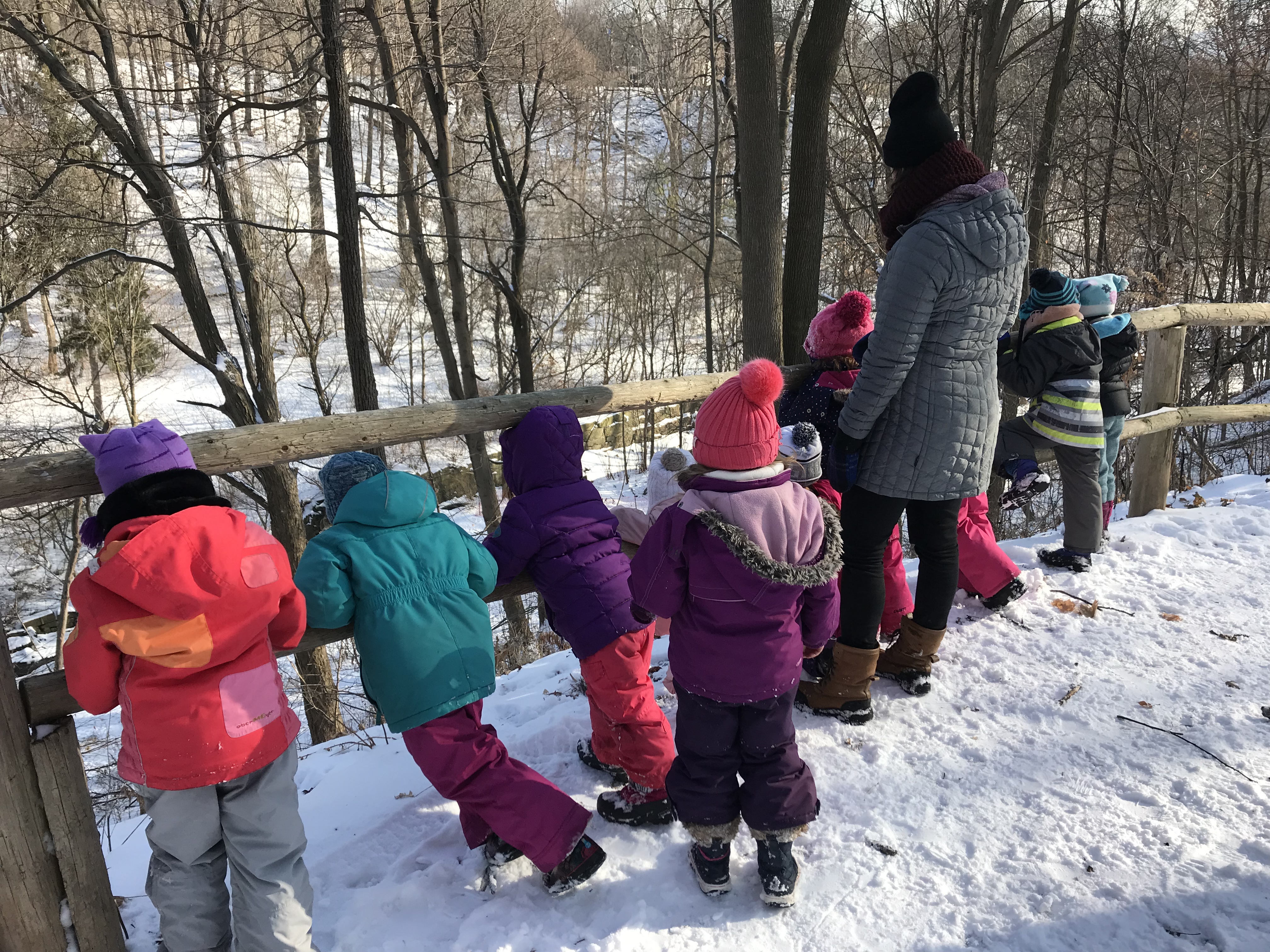 The Grade 1-2s and Early Learners remark how they can see clearly across the ravine during the winter as opposed to when the view is completely obstructed by trees during other seasons. 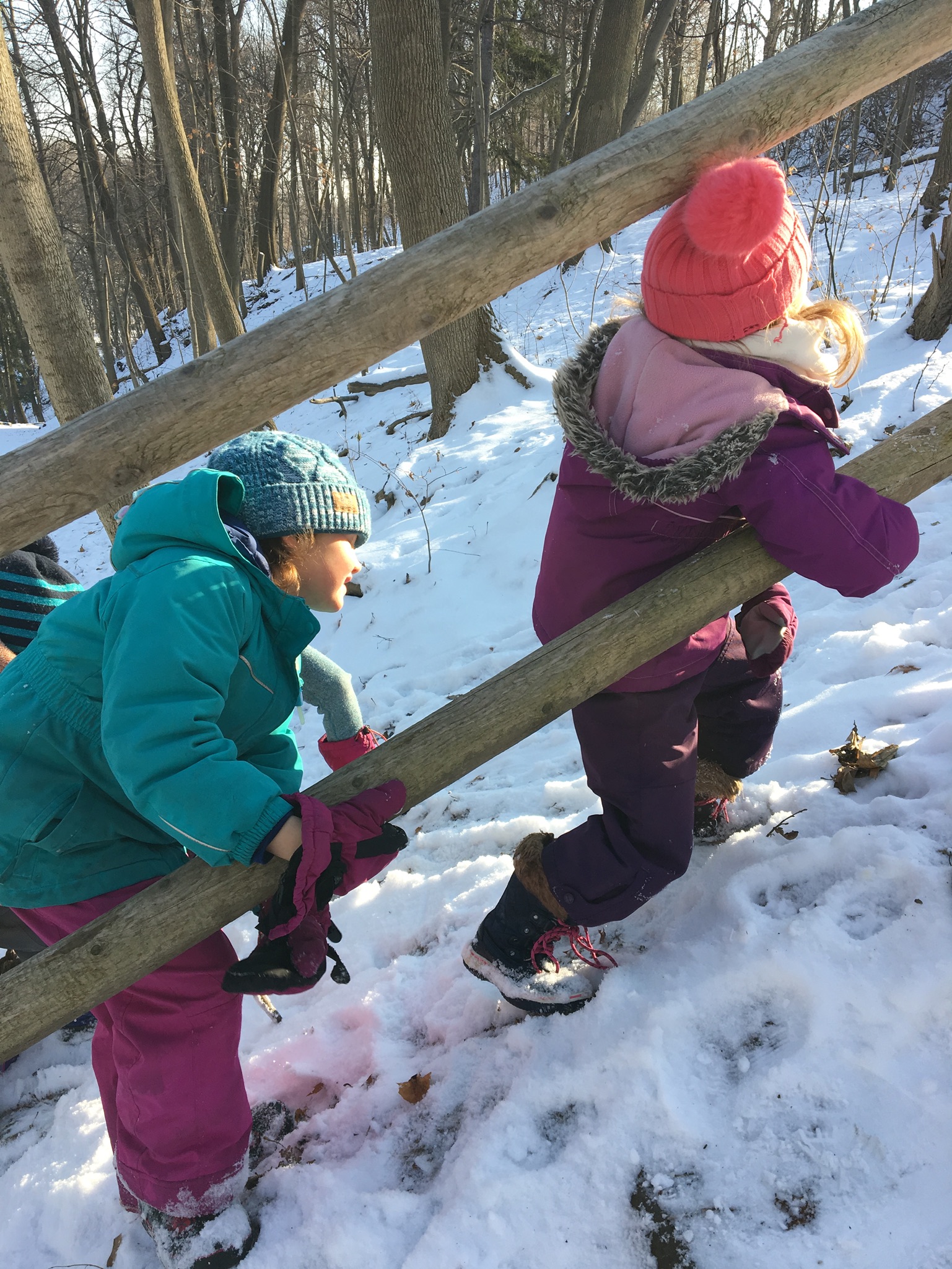 K and G use the railings to scale a slippery slope during our Friday ravine walk. Physical risk-taking is extra fun with a little snow on the ground! 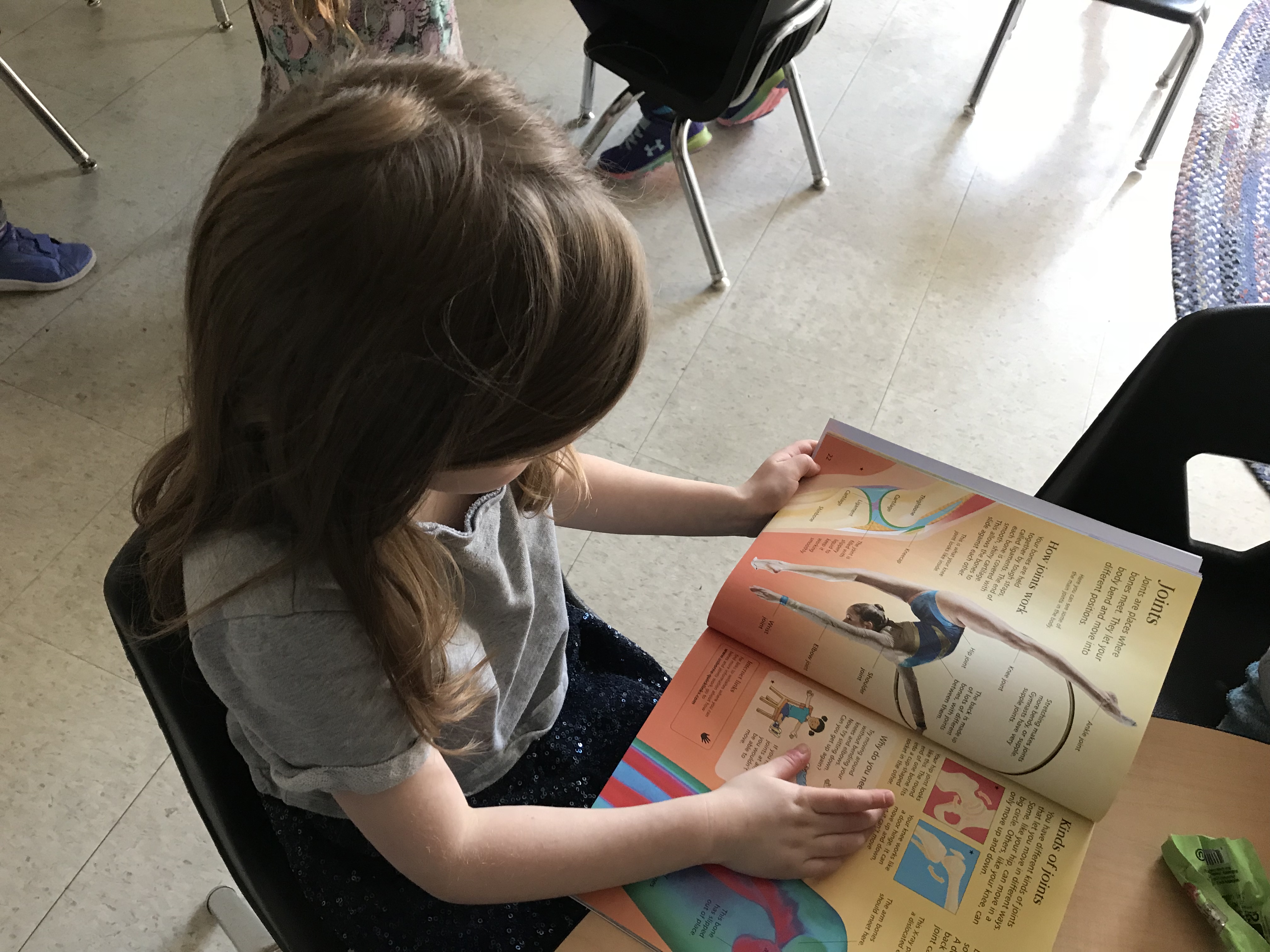 Ever the science enthusiast, G enjoys reading about the human body during an afternoon snack.